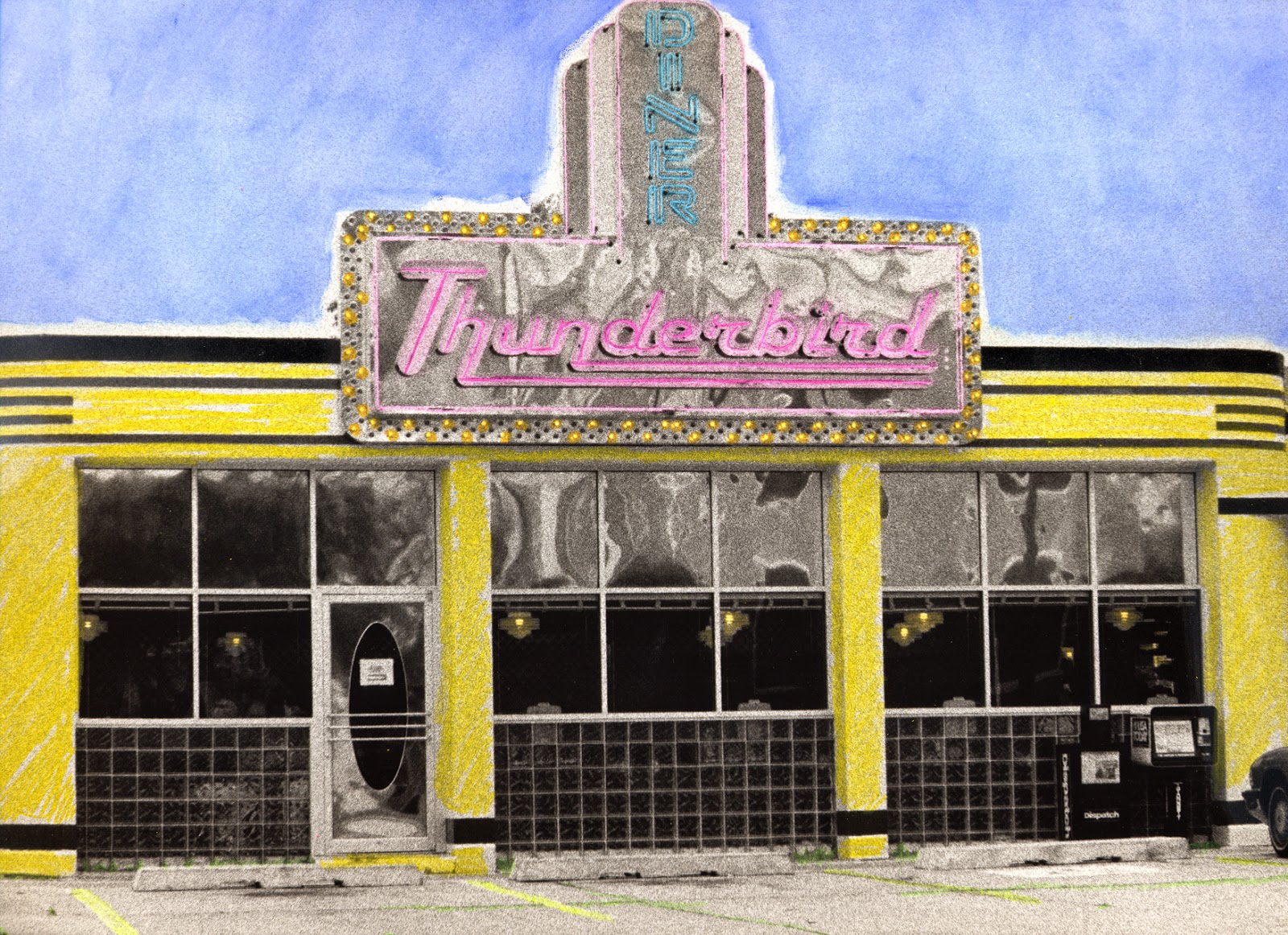 I ran across these scans of a photographic series of I did back in the 1990s. The series was a collection of photographs of old-school American diners taken all over the country. I had a couple of art exhibits consisting of these photos and more that I don’t have scans of.

The originals are real, silver-print photographs I printed in my own darkroom. Then I applied handcoloring with Marshall’s color pencils and their special oil made just for blending on photos. I believe Marshall’s products are still available at art supply retailers. Though my darkroom is no longer extant, I still have all my handcoloring supplies.

Although it’s possible to color digital prints, the materials and the effect are not at all the same. The materials I used for traditional photographic paper, which is made of real cotton fibers, will not adhere to the finish of digital paper, which has a plastic coating. It’s really becoming a lost art.

The traditional process consisted of shading an area of the photograph lightly with the pencils. Then I dipped a cotton swab in the oil and blended the color evenly over the surface. Then I wrapped a few strands from a cotton ball around the end of a toothpick, dipped it in oil and removed the excess color from unwanted spots. Meticulous, meditative work.

I truly miss working in the darkroom; some of the joy and beauty went out of photography for me when it became too difficult to get darkroom supplies. I pray the supplies are still available once I get somewhere I can set up a traditional darkroom again. Or maybe I can contact some mad scientist to make me some chemicals. Surely I can locate a mad scientist out there somewhere.

BUT, all this digital technology allows me to scan these photos and present them for your enjoyment. I’ll try to remember some details about the where and the when for each:

Angel’s Diner, Palatka, Florida. In this you can see the halo around the sign left by the oil I used to remove the color once it was blended: 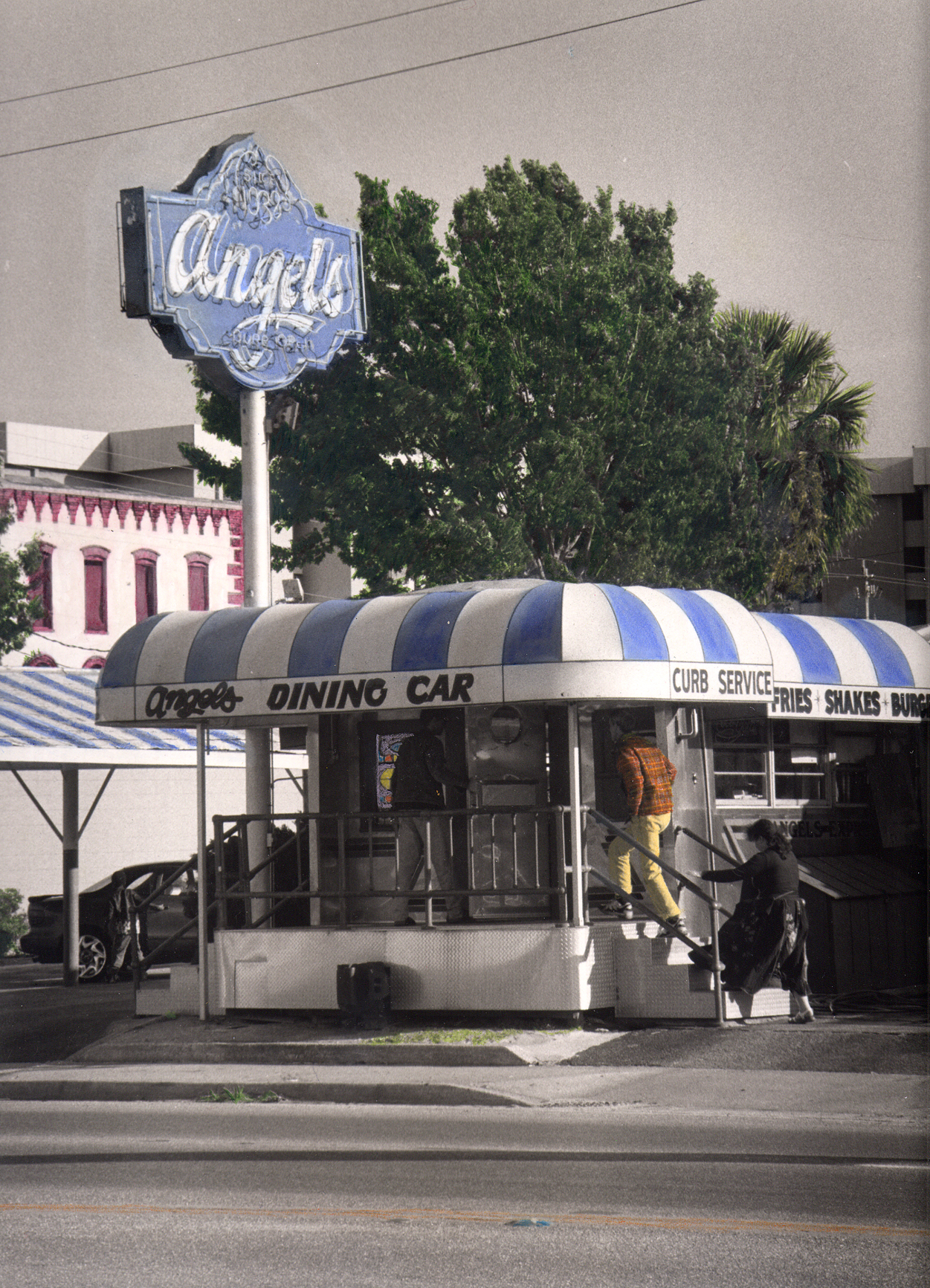 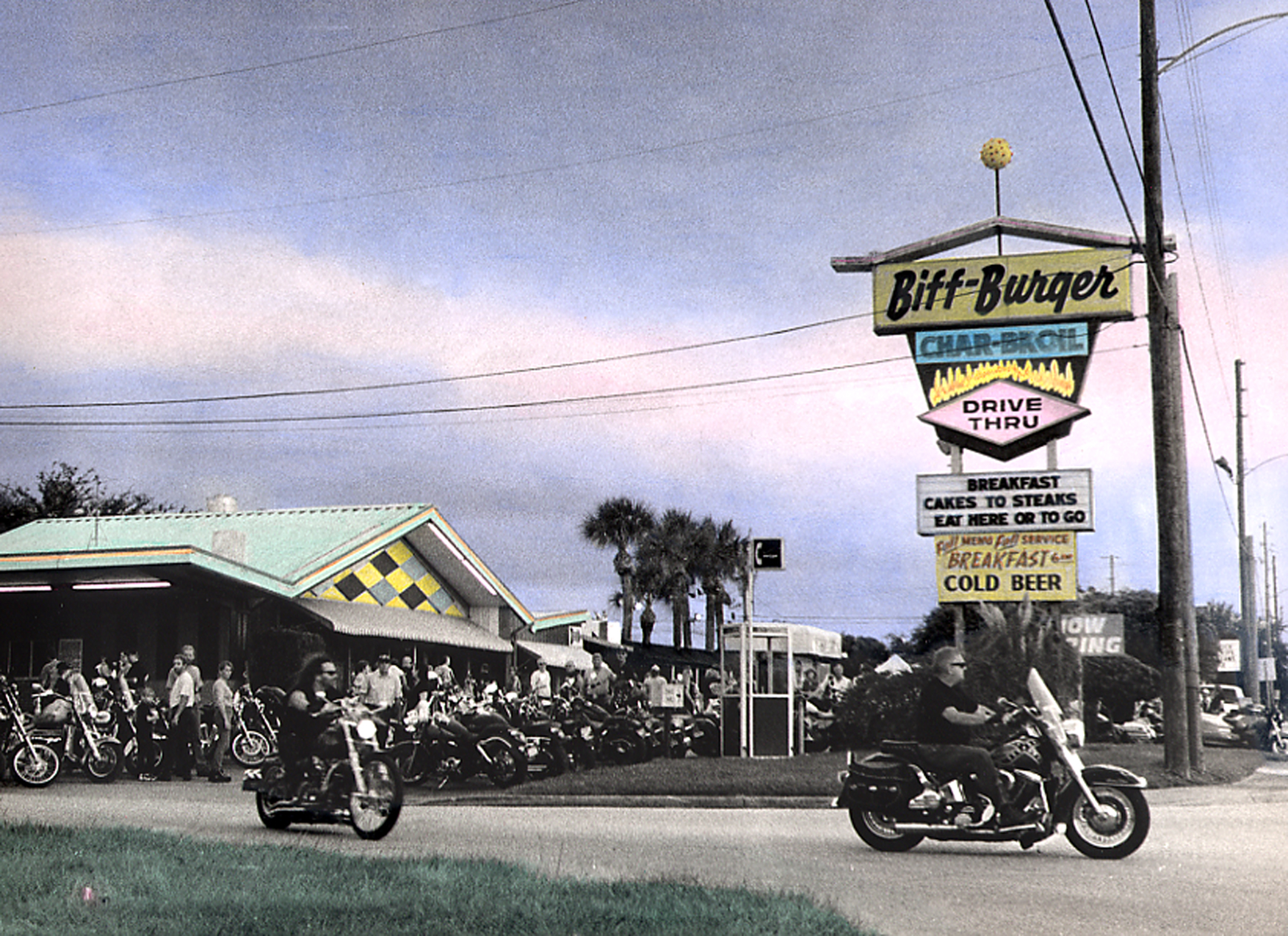 Now-defunct Buoy Grill near the Port of Tampa, Florida: 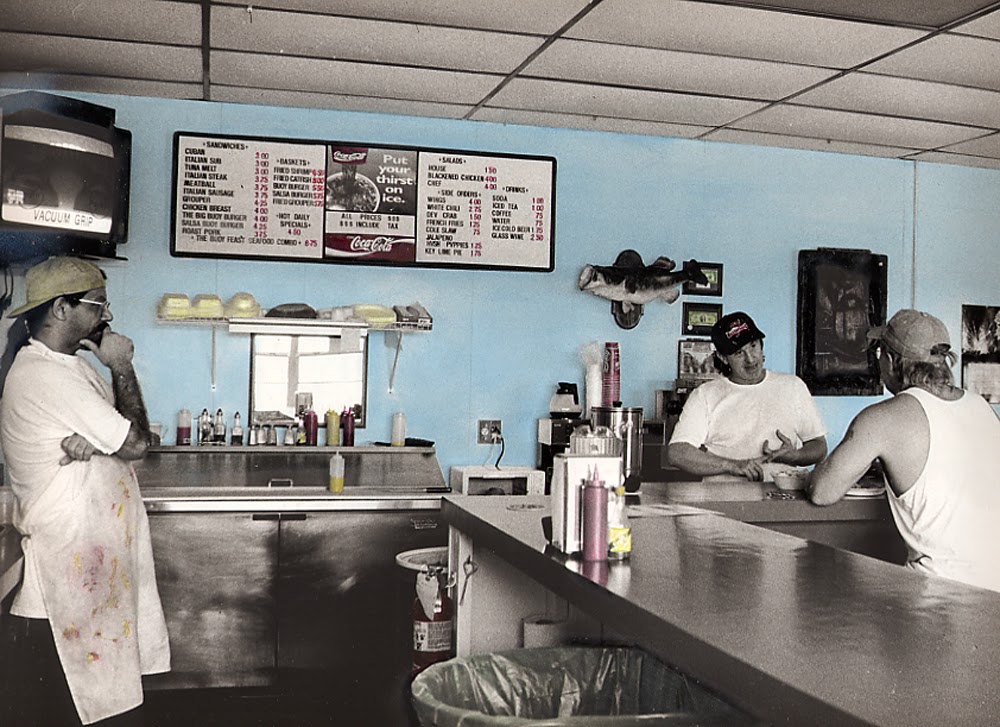 Chuck’s Chinese-American in San Francisco, California. It was just on the edge of Chinatown: 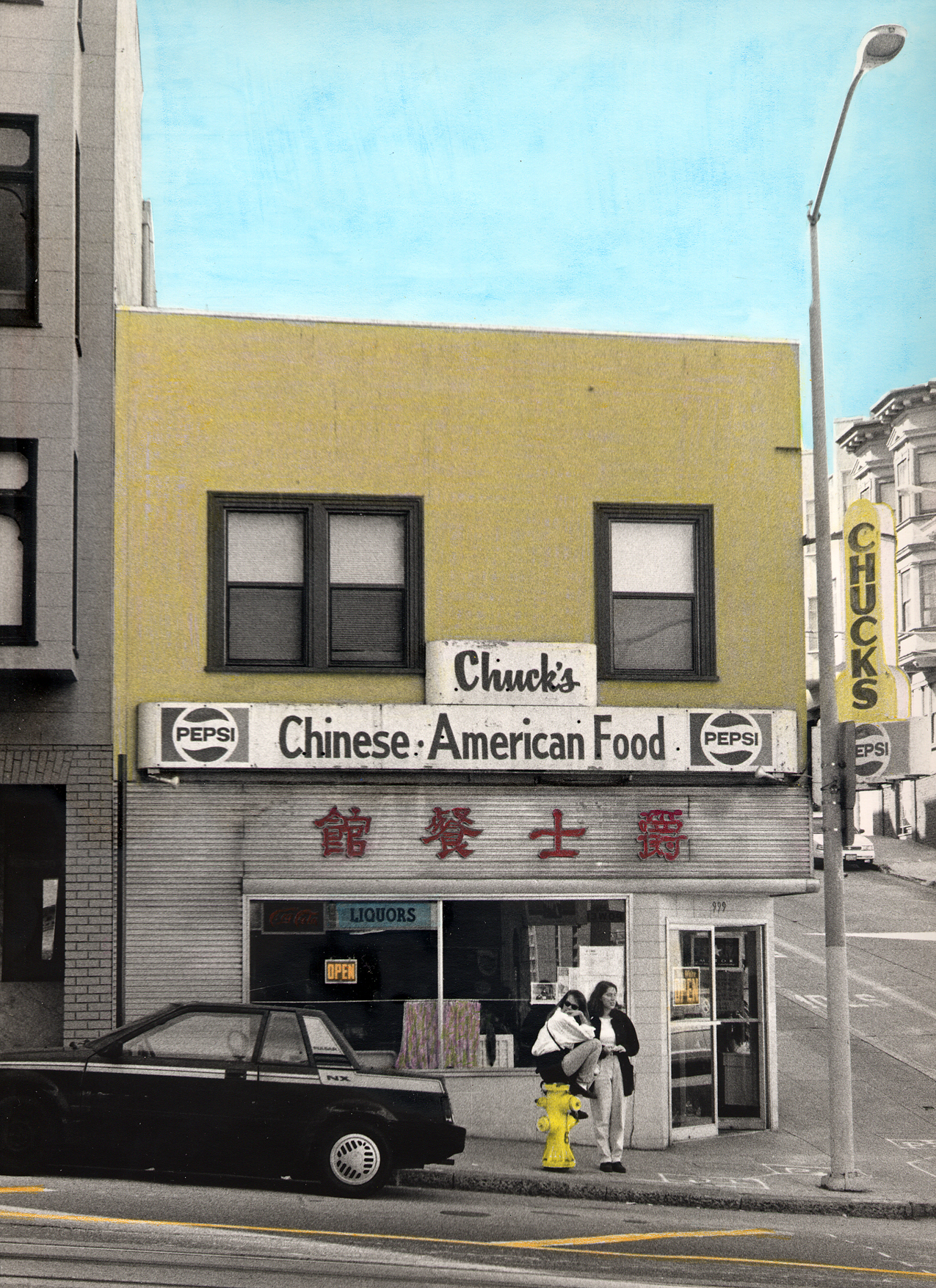 Chuck Stop Cafe near Boulder, Colorado. This was the first diner I shot (1993): 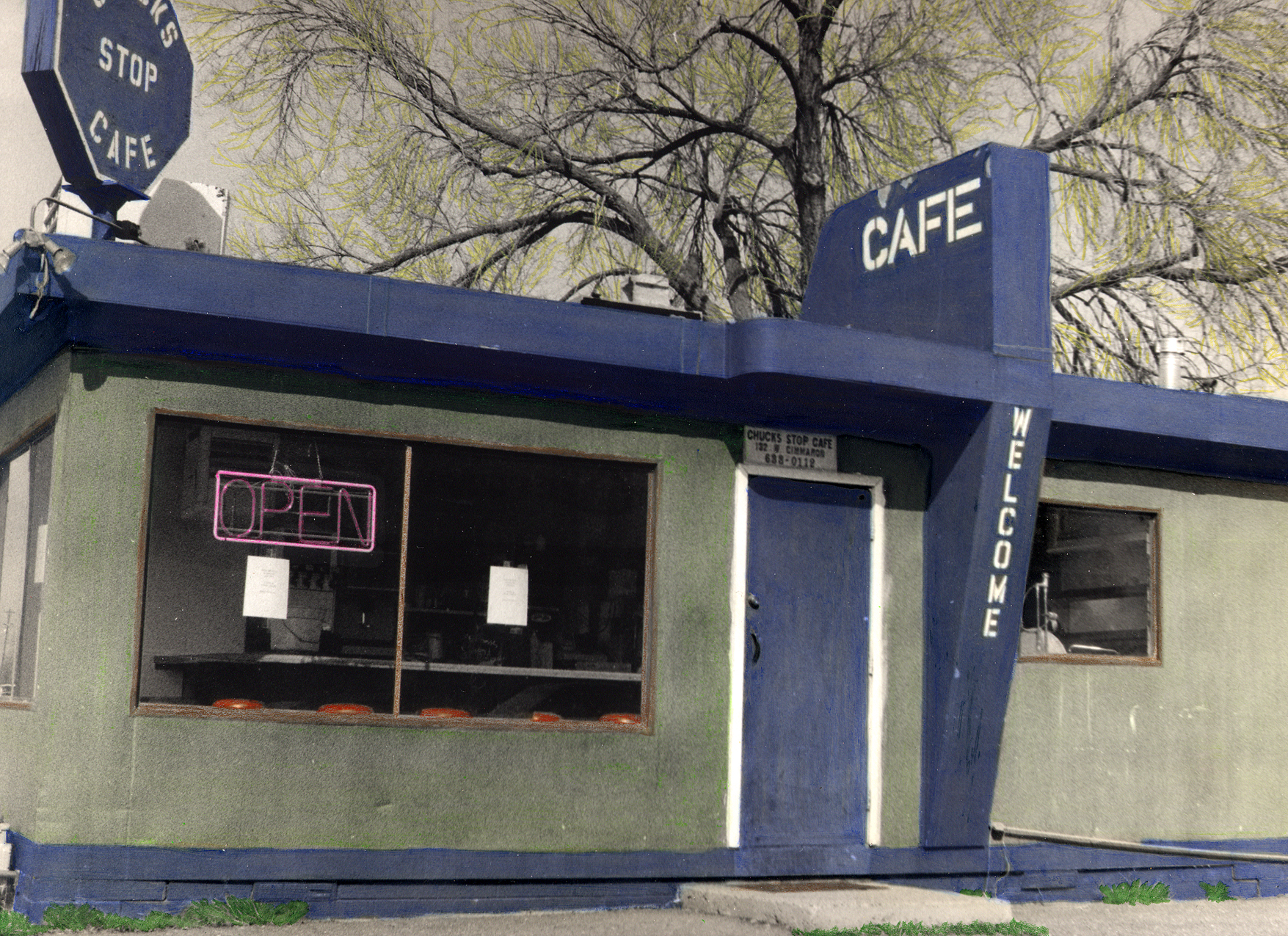 Denver, Colorado, Train Station Diner. This was the first diner I hand-colored. LOVED the pink neon lighting effect. The lone customer is my husband: 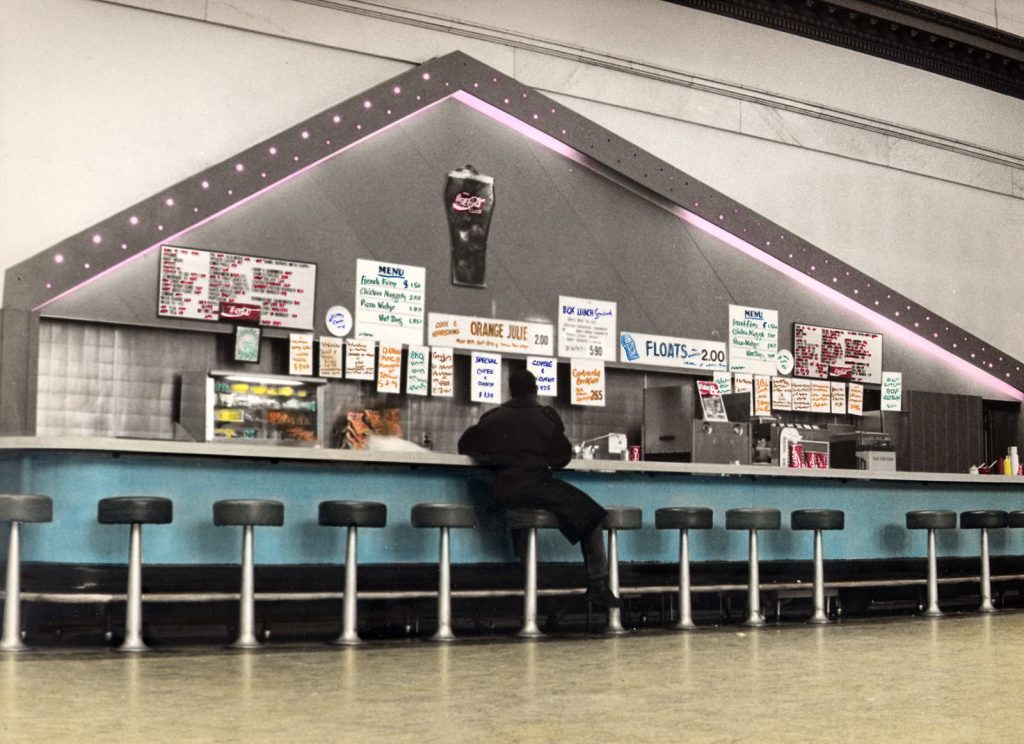 Flame-Broiled Chicken Truck, Holiday, Florida. This was the advertisement for a diner in a strip mall. The truck sat in the parking lot along US Hwy 19 for the longest time; it’s long gone now, though: 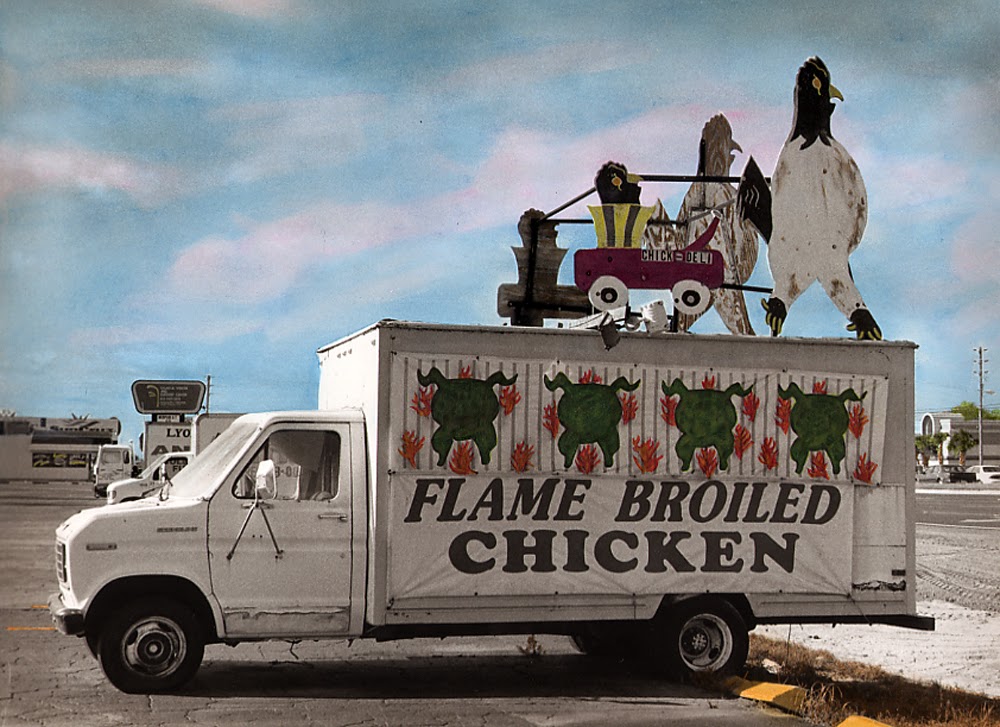 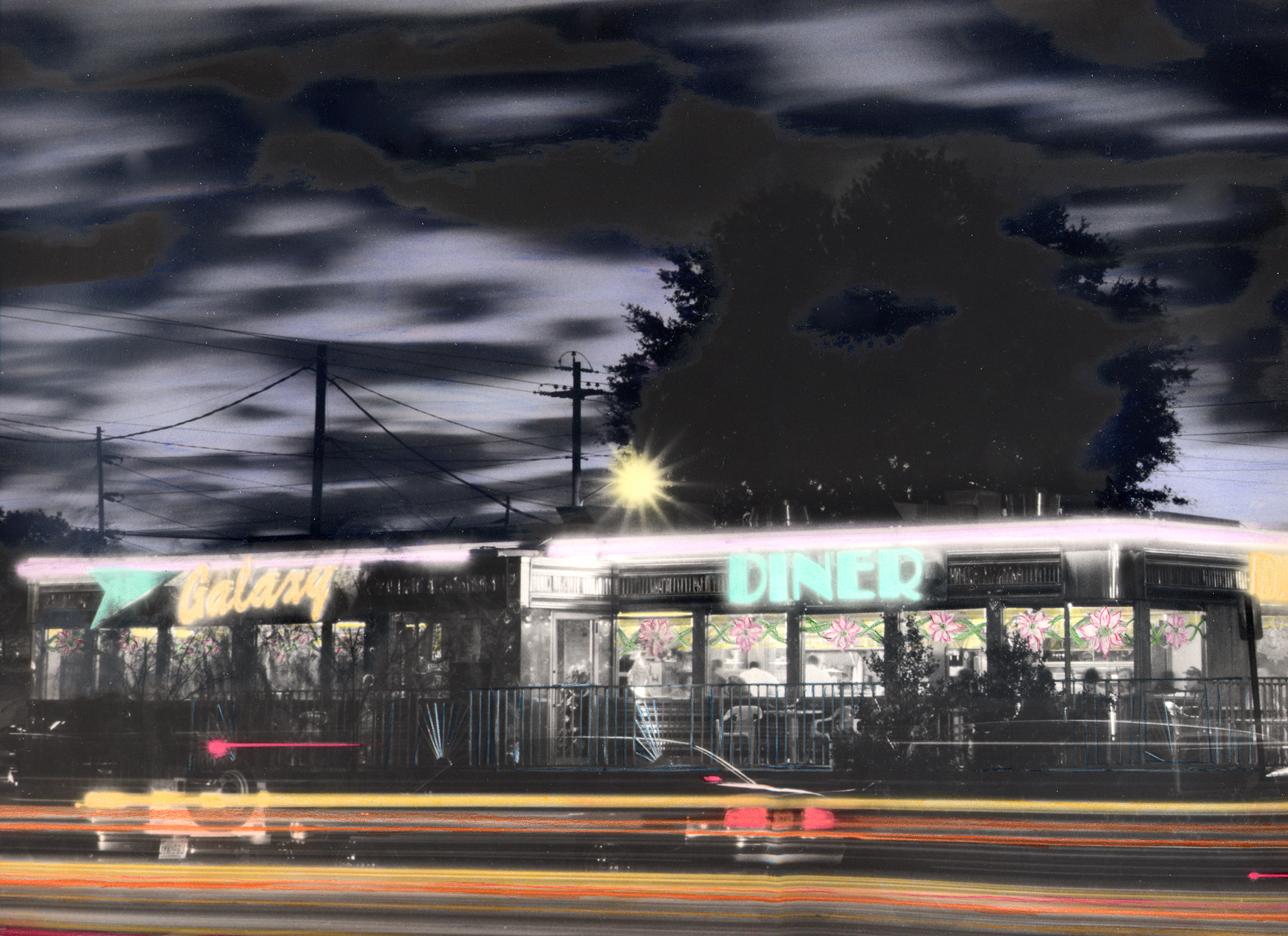 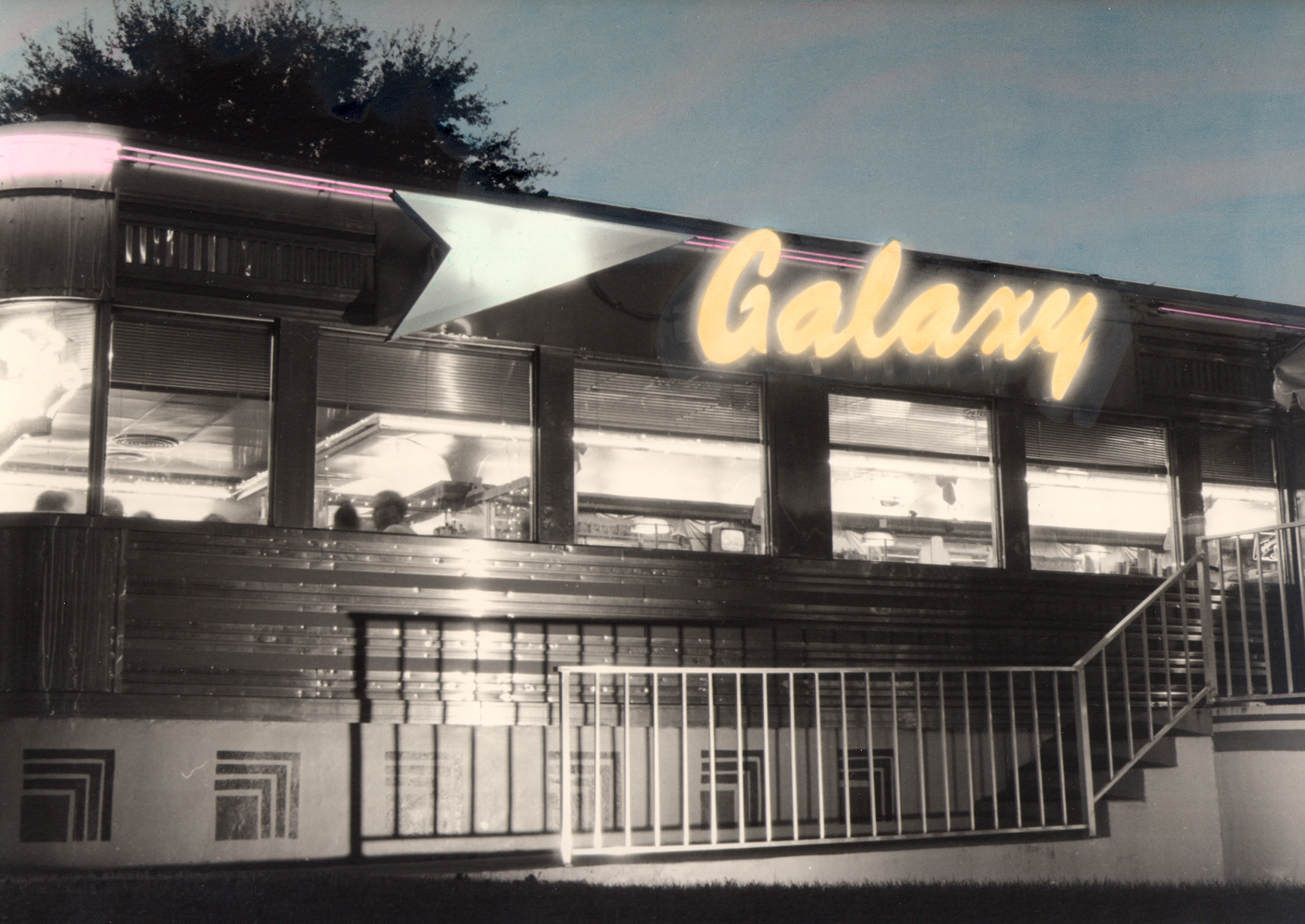 Huey’s Diner in Sacramento, California. I believe it’s closed now. Though you can’t tell from this shot, the waitress had an unusually large head: 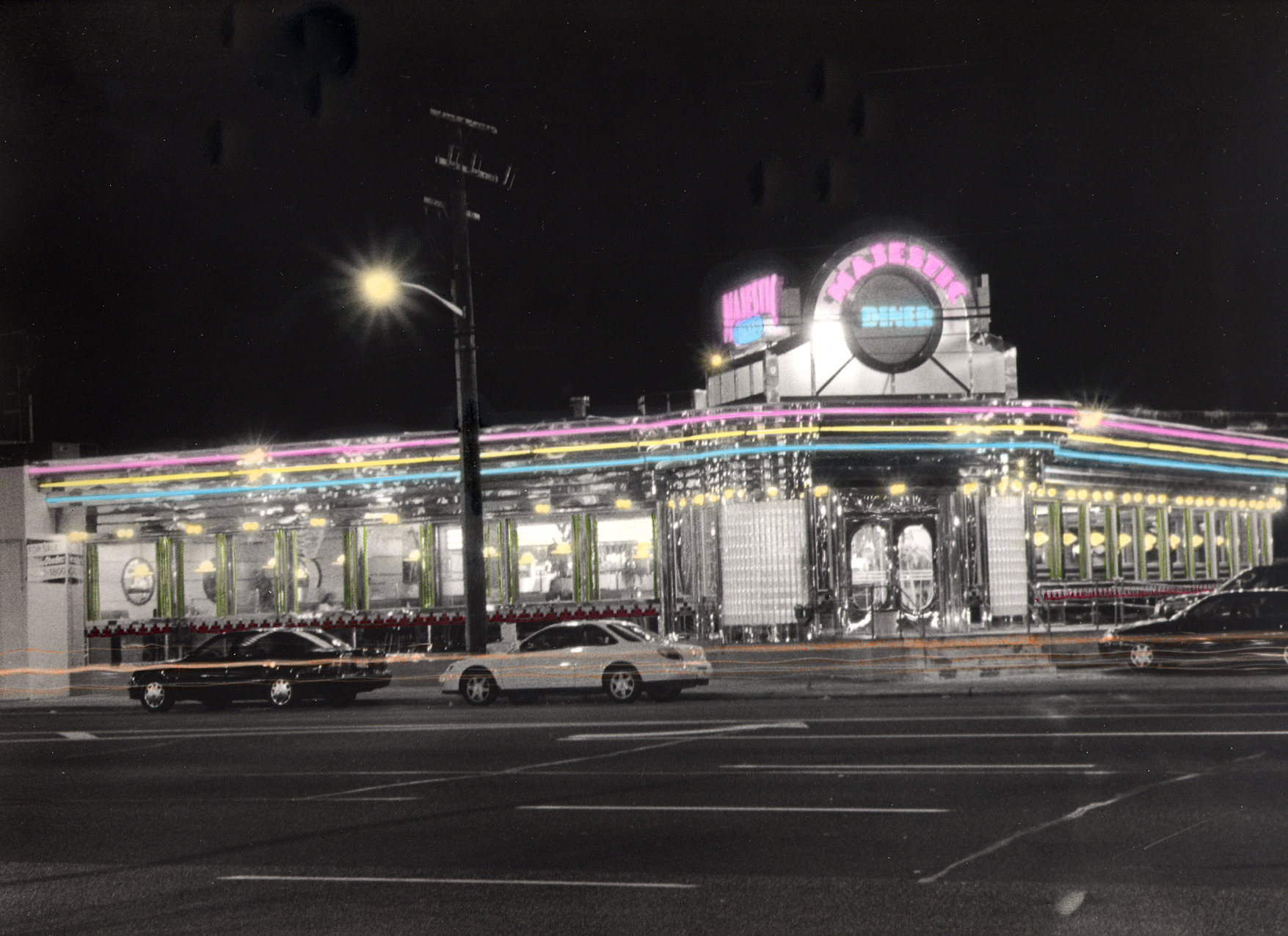 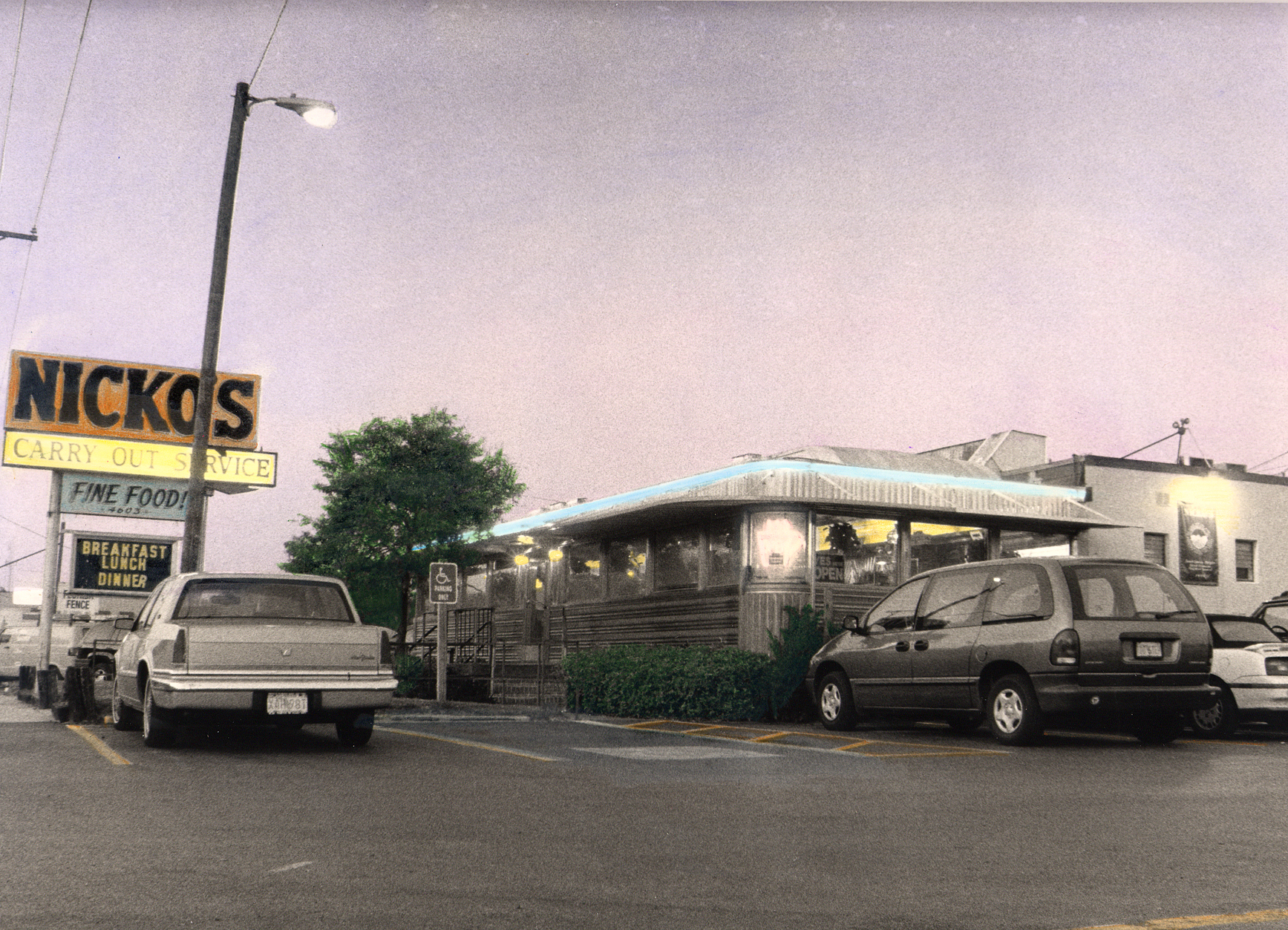 Stage Door Deli, NYC. This place was only a couple of blocks from the World Trade Center and was damaged in the 9/11 attacks. It’s since reopened with an entirely new facade. Here’s what it used to look like: 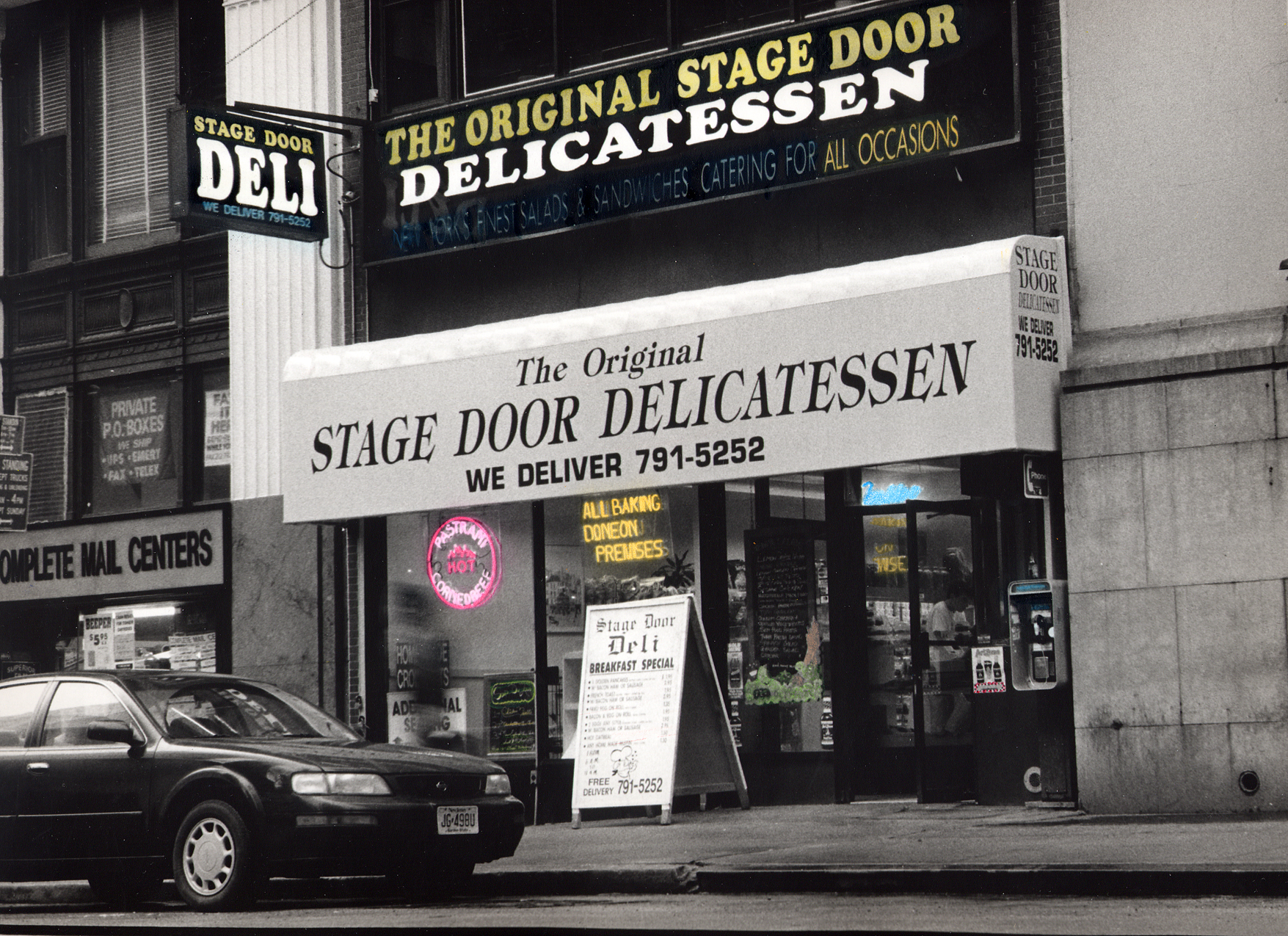 “Thomas’s Ham ‘n’ Eggery Diner in Carle Place has been a breakfast haven
since it first opened in 1946. Some patrons fondly remember the six-foot
tall neon chicken that sat atop the small diner, dropping eggs into a
skillet. The chicken fell off when hit by the tail end of a hurricane in
1979 and new zoning laws wouldn’t allow for a replacement.” 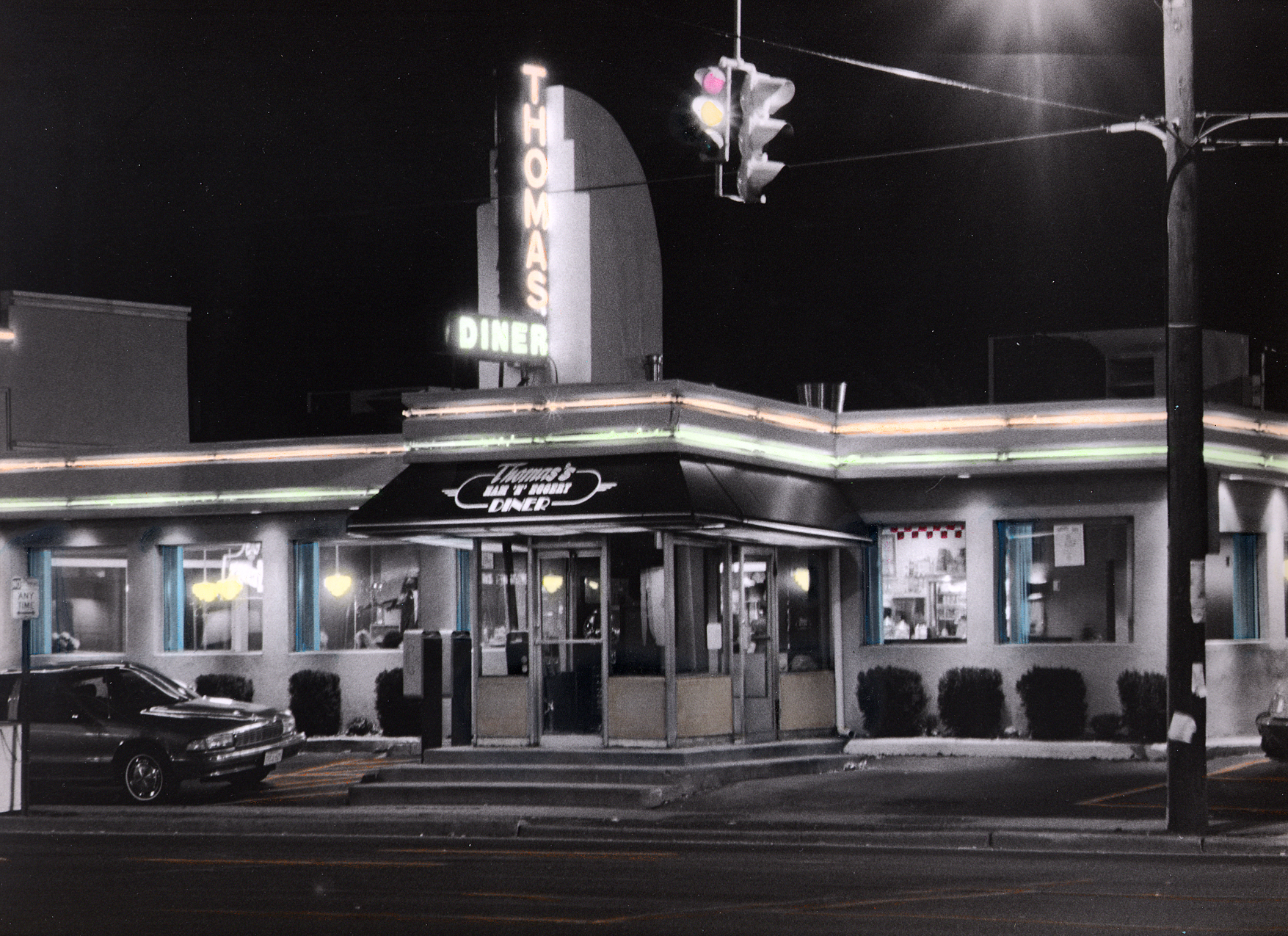 Thunderbird Diner, Columbus, MS; my college town. Originally a gas station, this place was a convenience store then a liquor store in my day. It was a diner in the 90s and a convenience store again some time later. Google Earth shows it as a restaurant called Zachary’s these days: 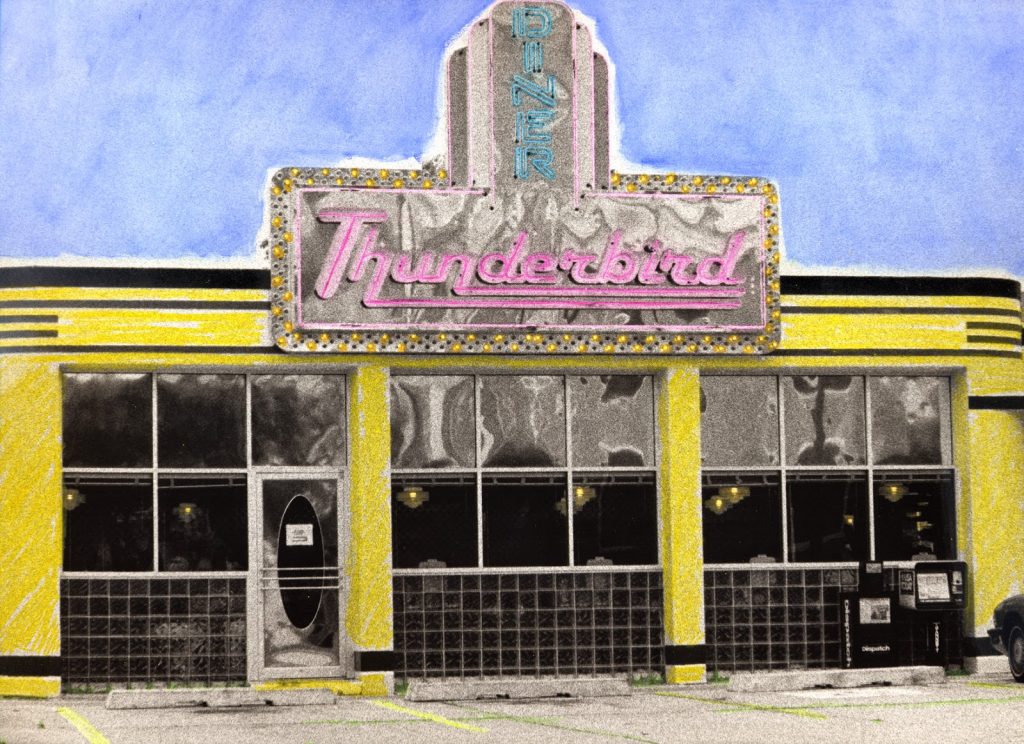 Thanks for sharing my walk down memory lane. Have a good week! 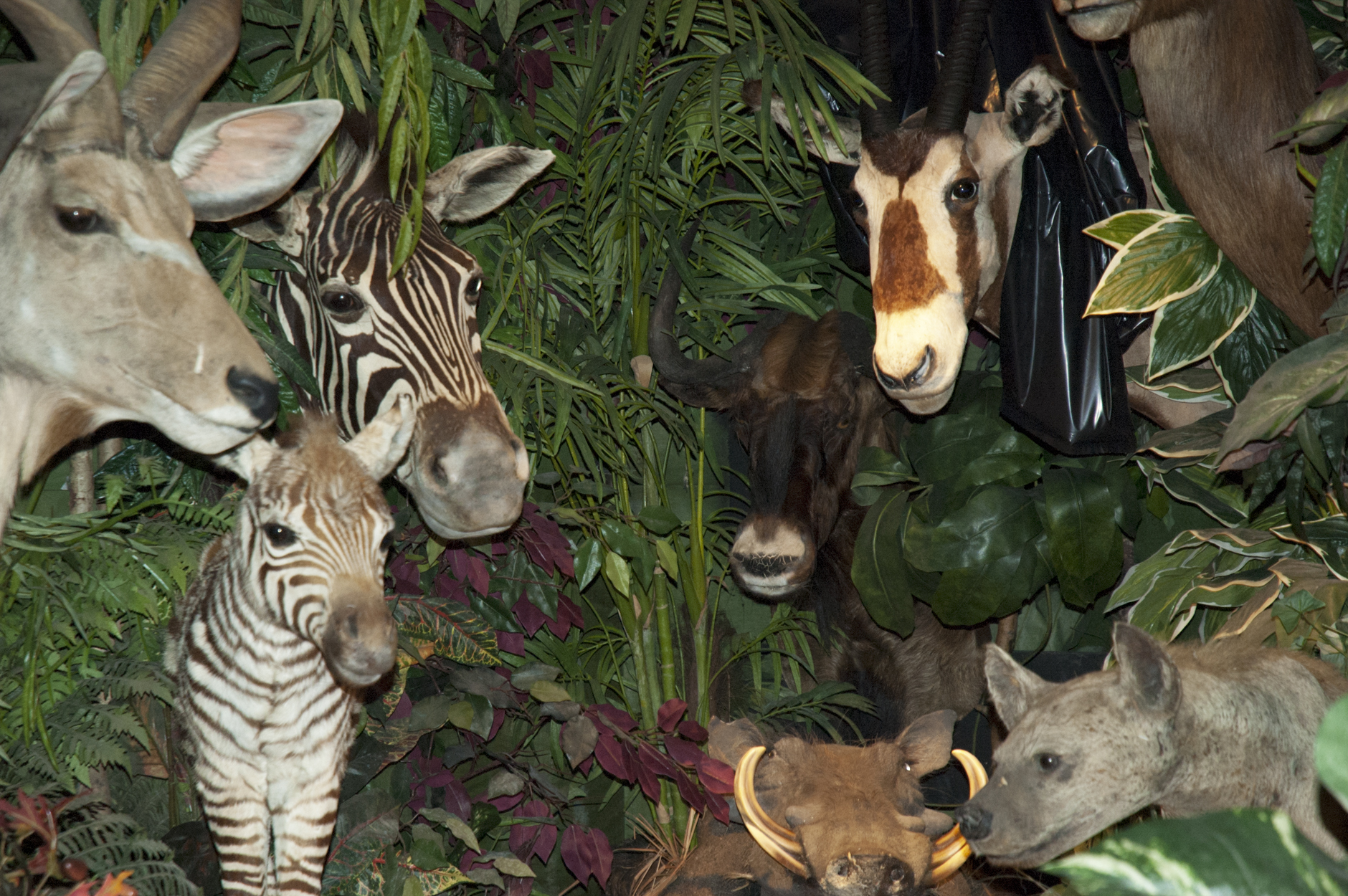