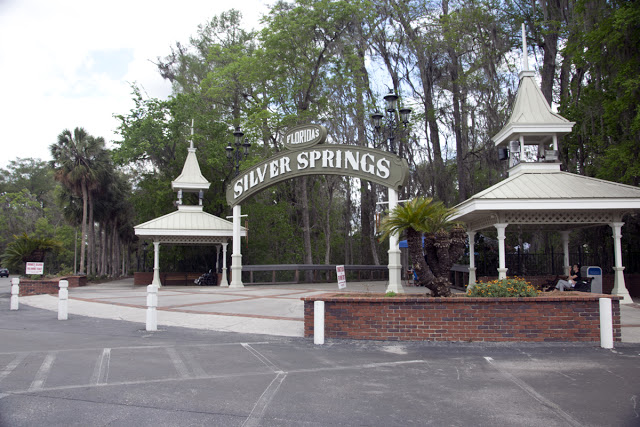 Last week I announced that this blog would appear weekly once again, after a twice-monthly experiment that didn’t suit. This week I’m announcing that the post day will change from Wednesdays to Thursdays – starting this week! Now to the post:

There’s something I’ve wanted to do since I was a little girl. I could never tell you exactly where, but I’d read about glass bottom boats and the fantastical world they could reveal to us mere mortals. And after I’d experienced seeing through swim goggles and such, I knew the view on a glass bottom boat would be nothing short of magical.

Well, recently this girlhood dream came true! My husband and I drove just a couple of hours from our home in Florida to Silver Spring State Park, where these enchanted vessels have been running since the 1870s.

Now, before you get all pumped up about underwater photos, I want you to know that this blog post is about the park, not the boats. For pictures I took on the boat, you’ll have to wait til next week. This week you can get familiar with the surroundings and then spend seven days of joyous anticipation before the underwater wonders are revealed. Settle down.

We arrived at the park in the afternoon on a Sunday. I was lucky to get this photo of the front gate with almost no people in the shot – that’s nearly unheard of!

Not that there weren’t lots of people there. On the contrary, hordes of tourists were flocking in because it was Springsfest weekend – something I didn’t even know before we arrived. Along the entryway, rangers and others were presenting Florida- and park-related information and items to the visitors, including a close-up of some of the wildlife: 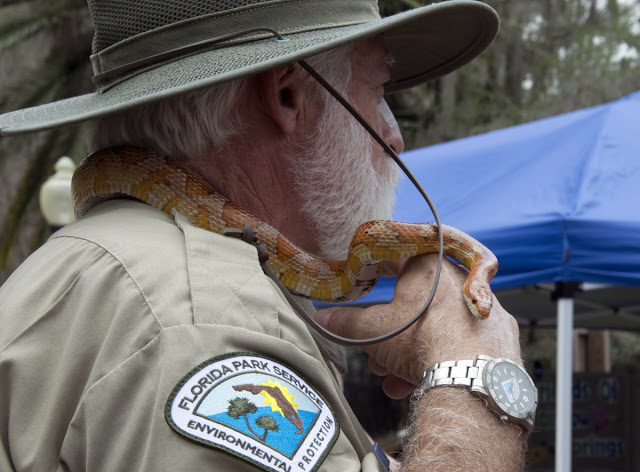 After taking that shot and getting the h- out of there, I caught my first glimpse of the enchanted watercraft I was there for: 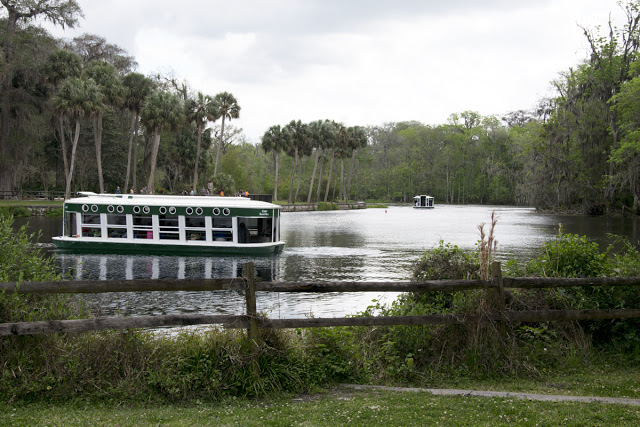 I also saw musicians setting up:

There was lots of Spanish moss hanging over lovely pathways (see another boat in the distance?): 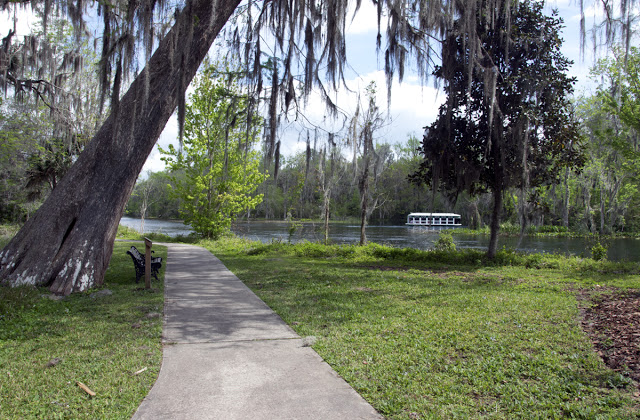 There is a long building opposite the water, which was all a-bustle that day with displays of artwork from local students: 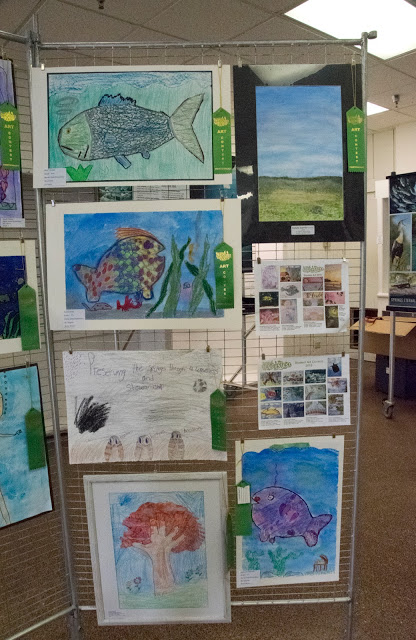 And an exhibit of props from the TV show Sea Hunt, starring Lloyd Bridges, which had been filmed in the park back in the 1960s. 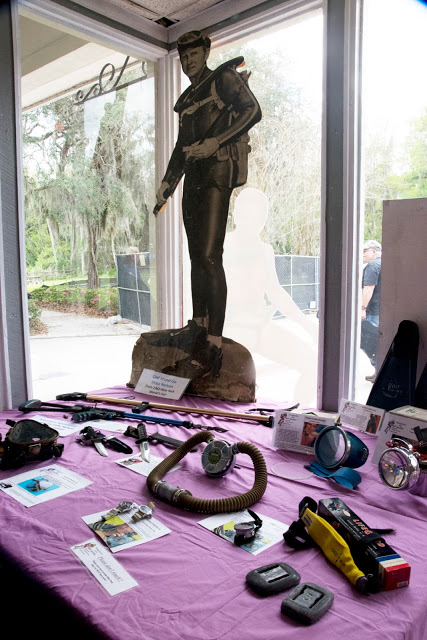 Hollywood loved and loves Silver Springs because of its sparkling-clear water. In fact, many movies have been filmed here because of the clear water and because of the natural Florida forest surrounding the river. The likes of Johnny Weissmuller was here filming six Tarzan movies, and, perhaps most famously, the Creature from the Black Lagoon had his home in Silver Springs! Among other movies filmed here were The Yearling starring Gregory Peck and Jane Wyman, Never Say Never Again with Sean Connery, and Blindfold with Rock Hudson.A quick internet search will tell you many more movies and TV shows than I have space for.

Interestingly, there are rhesus monkeys living in the park. Legend says their ancestors escaped during filming of the Tarzan movies, but that probably isn’t true. In any case, you can’t really see them unless you venture farther down the river than we went. Maybe next time.

I learned that the water opposite the long building was a result of the largest spring in the park and was the actual beginning of the Silver River. You can see the color variations deepening to a dark blue where the water is deepest. You can also just make out the diver down there: 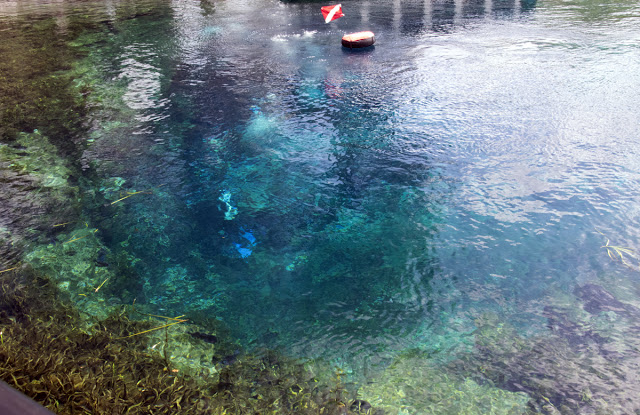 Springsfest included a diving exhibition in which the divers used movie props to simulate filming under there. You’ll see more pictures of that next week when I show you photos I shot from inside the boat. These are pictures I took before boarding. You can see a diver in a silver-colored suit creepily swimming along here: 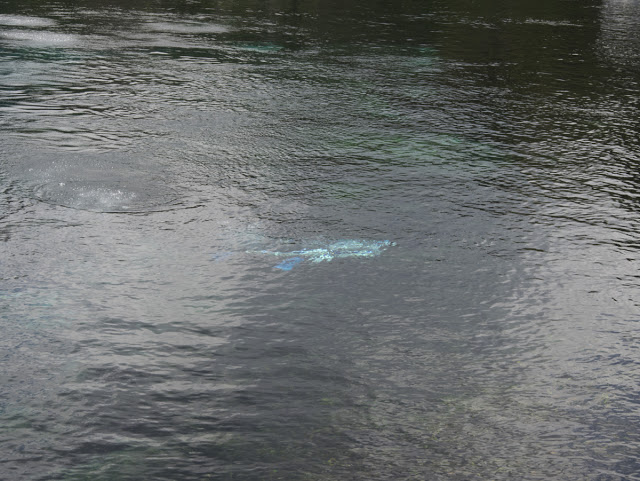 I like this shot which looks like I used the Posterization function of PhotoShop, but I promise I didn’t! 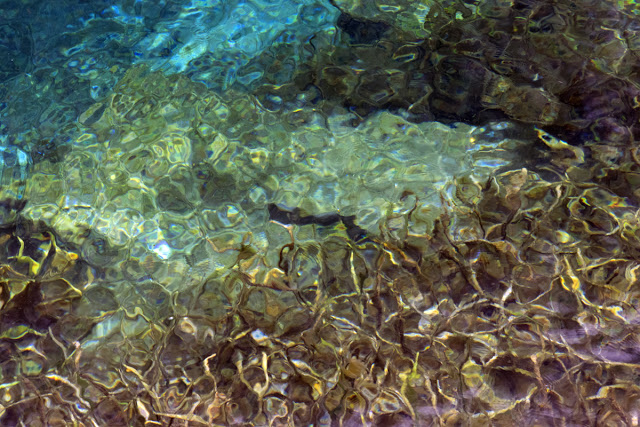 The Silver River runs from that point for just four and a half miles to the Ocklawaha River. There are several other artesian springs in the immediate area, each contributing hundreds of thousands of gallons of pure water from the Florida aquifer (the huge system of porous rock that contains our water supply) to the stream. The water is a constant 72 degrees F year-round.

The park started out as a theme park, which was established in the 1920s. It became a state park in the 1980s and has had its share of water pollution problems. A concerted effort started a few years ago has cleaned up the water considerably, though it still isn’t as clean and clear as it originally was. They’re still working on it.

That day, a group of five carboats/boatcars (what do you call those things???) paid us a visit: 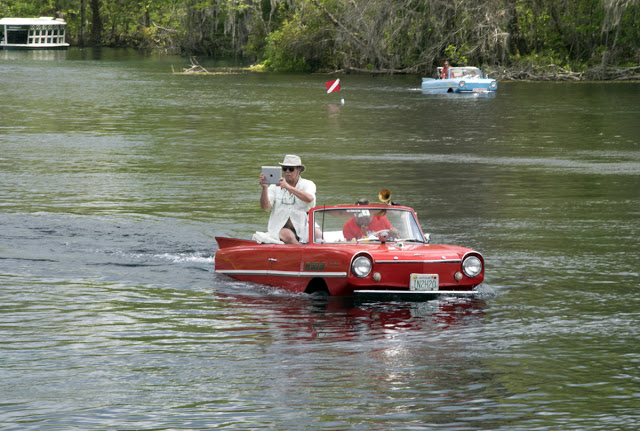 Not to mention kayakers, canoers, motorboaters, paddle boarders and all manner of watercraft: 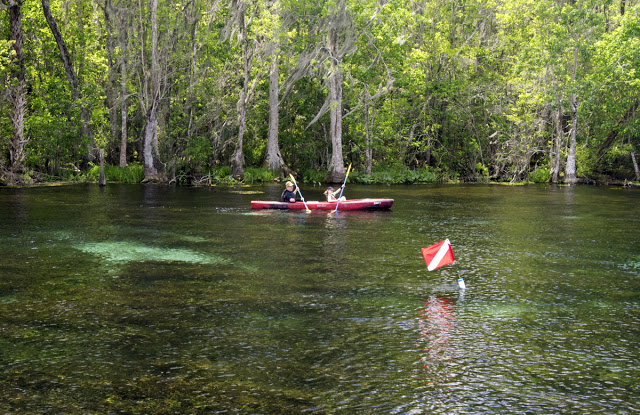 While we waited for our boat tour to board, we walked a little of the park. There was a bar made out of a former glass bottom boat (is that the park staff at the bar?): 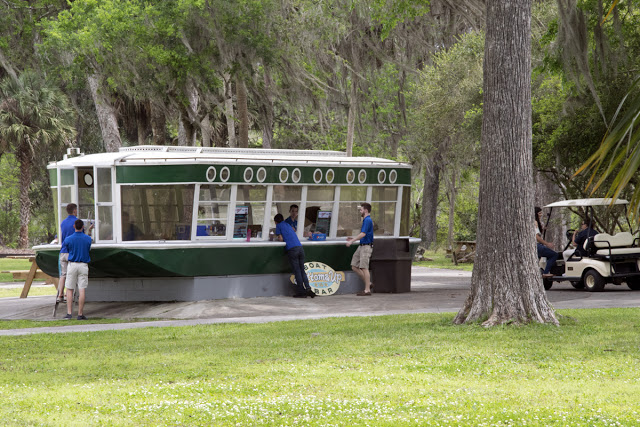 An educational, free and, thankfully, air-conditioned exhibit about Florida’s water and natural resources inside a semi trailer:

Any number of beautifully landscaped walkways: 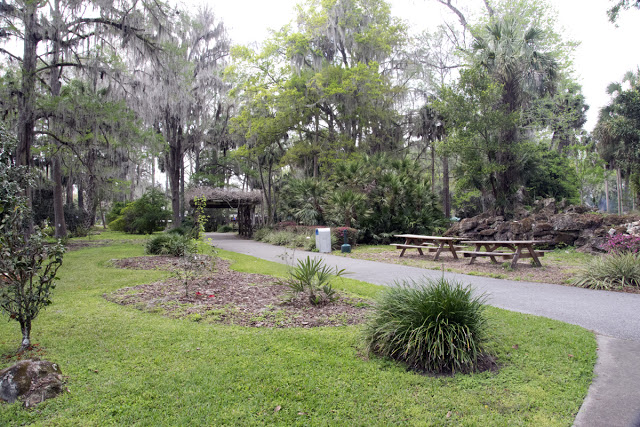 Plus a few of the local natives posing for a picture (can anyone tell me what kind of snake this is?): 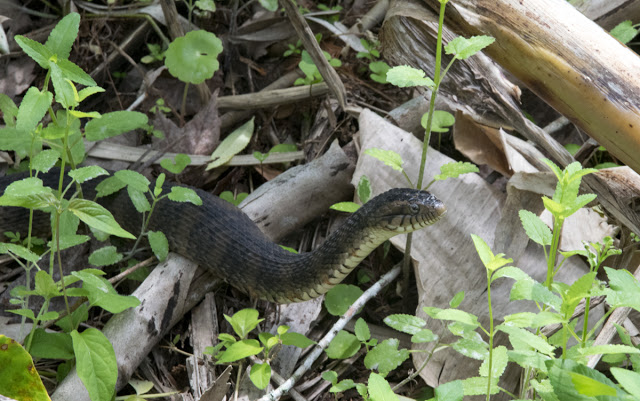 There’s a statue of Osceola, a warrior for the Seminole tribe who fought against the US government when they tried to remove the Native Americans from Florida in the 1830s. The statue depicts him stabbing the treaty, which would have moved the Native Americans to lands west of the Mississippi, with a dagger, thus giving his opinion of the matter. It’s really a shameful episode in our country’s history; if you want to know more, there is plenty on the Internet about it. 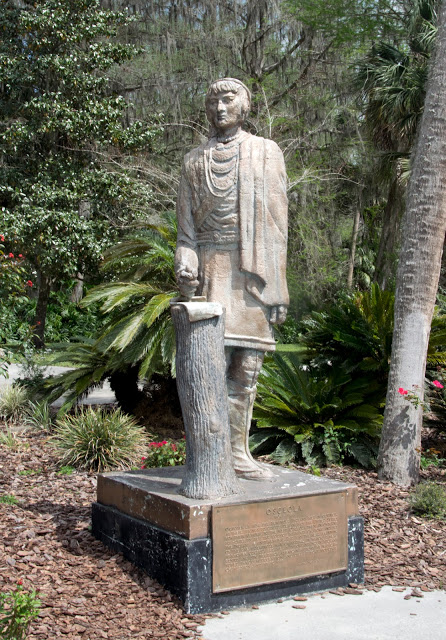 In summary, I definitely recommend this park, whether or not there is a special event going on there. It’s beautiful, the price is right ($8 per carload), parking is good, it’s easily navigable, and the natural beauty is unparalleled. In addition to what I showed you here, there is a small restaurant, a candy-maker, and a little souvenir shop. That day we also had vendors selling photos and artwork, as well as informational booths with displays about nature and so forth.

The glass bottom boat ride was not disappointing, and I look forward to bringing you that next week. But on the way home, I knew the day was truly over when I saw this: 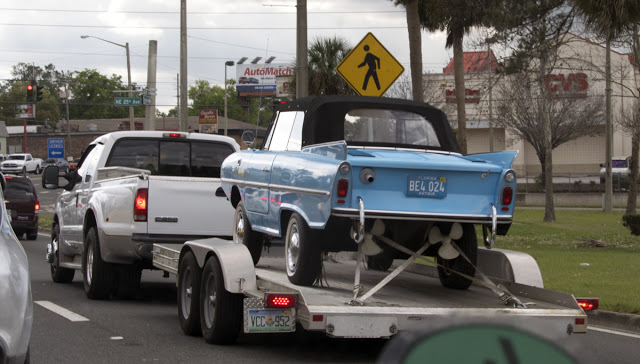 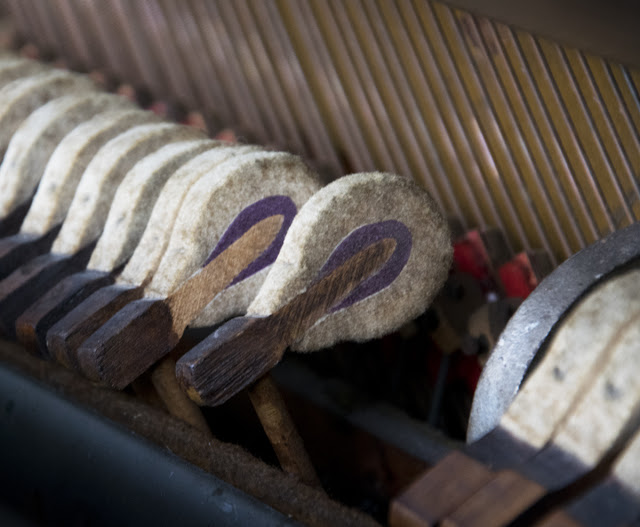