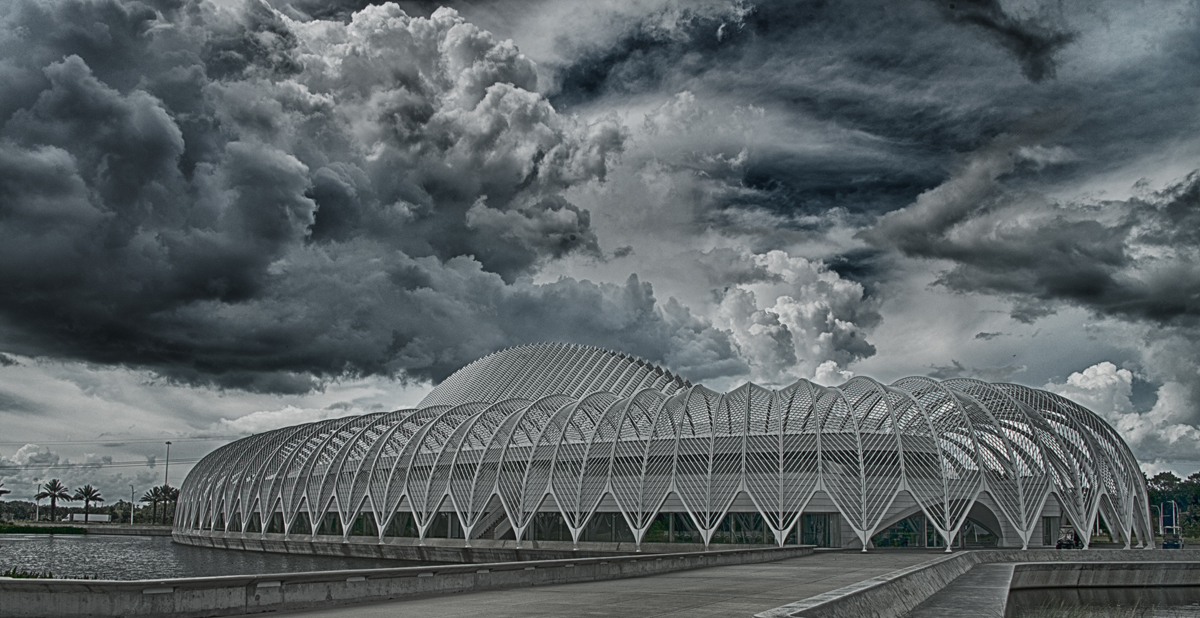 This week I have a simply stunning piece of architecture to show you! It’s the Innovation, Science and Technology (IST) building at Florida Polytechnic University in Lakeland.

In my post about the Airstream Ranch last week, I mentioned I’d seen sights along Interstate 4 recently I never knew existed. The IST at Florida Polytechnic was a prime example. (FYI: In the same post last week I also described the HDR digital photo process that gives photos a marvelous depth and interest. I used that process for the photo of the IST above.) 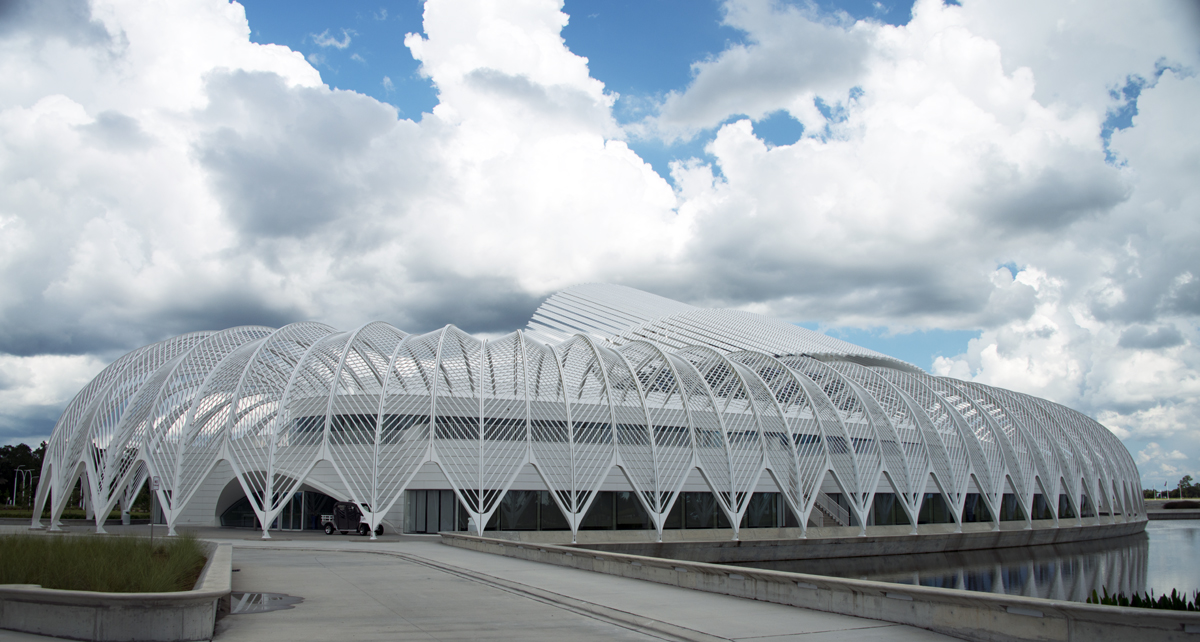 Looking for the world like a giant scarab beetle exoskeleton, the arches of the IST made me promise myself to come for a closer look – and for photos. So here I was with my best photo phriend, Paula Showen, combing the grounds and shooting some 300 photos of it. I’ve managed to pare them down to just 26 for this post.

We arrived around 3:00pm on one of the hottest, muggiest days yet this summer. We spent quite some time exploring the outer arches on the ground level first: 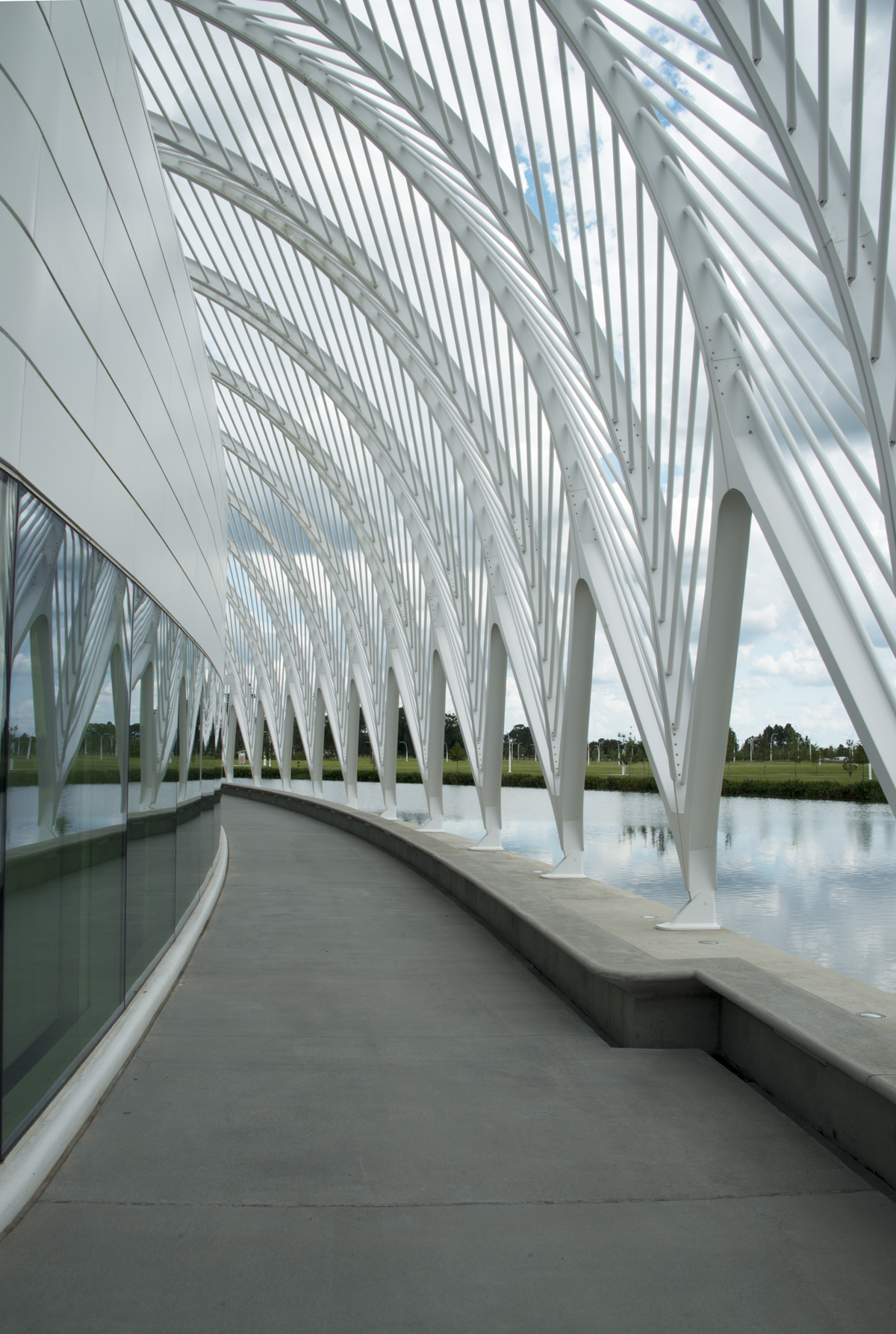 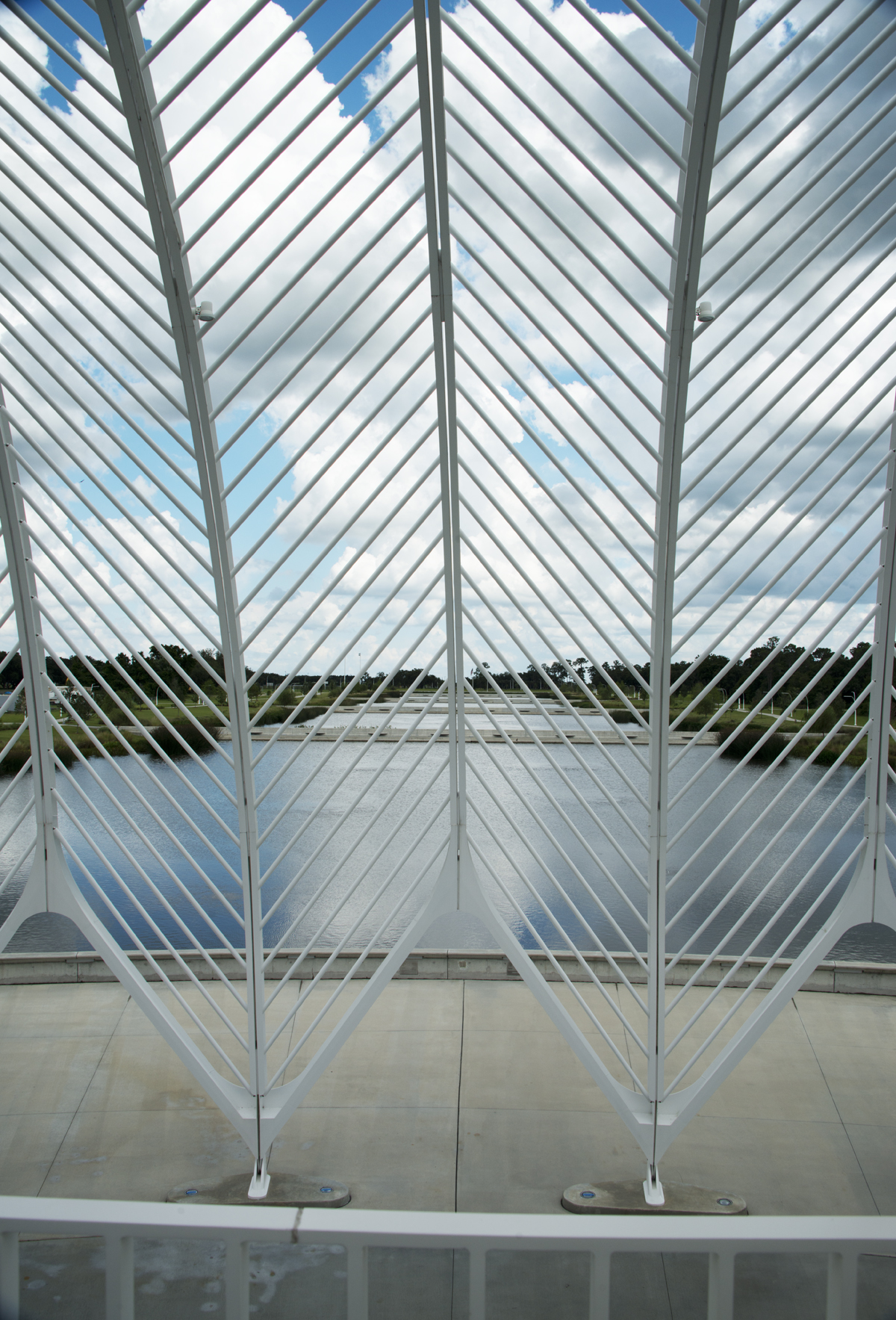 The IST’s designer was Santiago Calatrava, a well-known architect. His resume includes massive structures in far-flung places around the globe, including Seville, Toronto, Milwaukee, Dubai, Dallas and Rio. He designed a recently opened underground passageway near Ground Zero in NYC.

I unwittingly encountered one of his buildings in Zurich, Switzerland, a few years ago. He built a train station there. I remember photographing it but didn’t know anything about the architect at the time.

When the heat and humidity grew too much for Paula and me, we entered the building through what turned out to be the back door. The curves and arches and astonishingly symmetrical features were carried throughout the inside of the building. Even the reflections on the floors seemed designed to take our breath away! 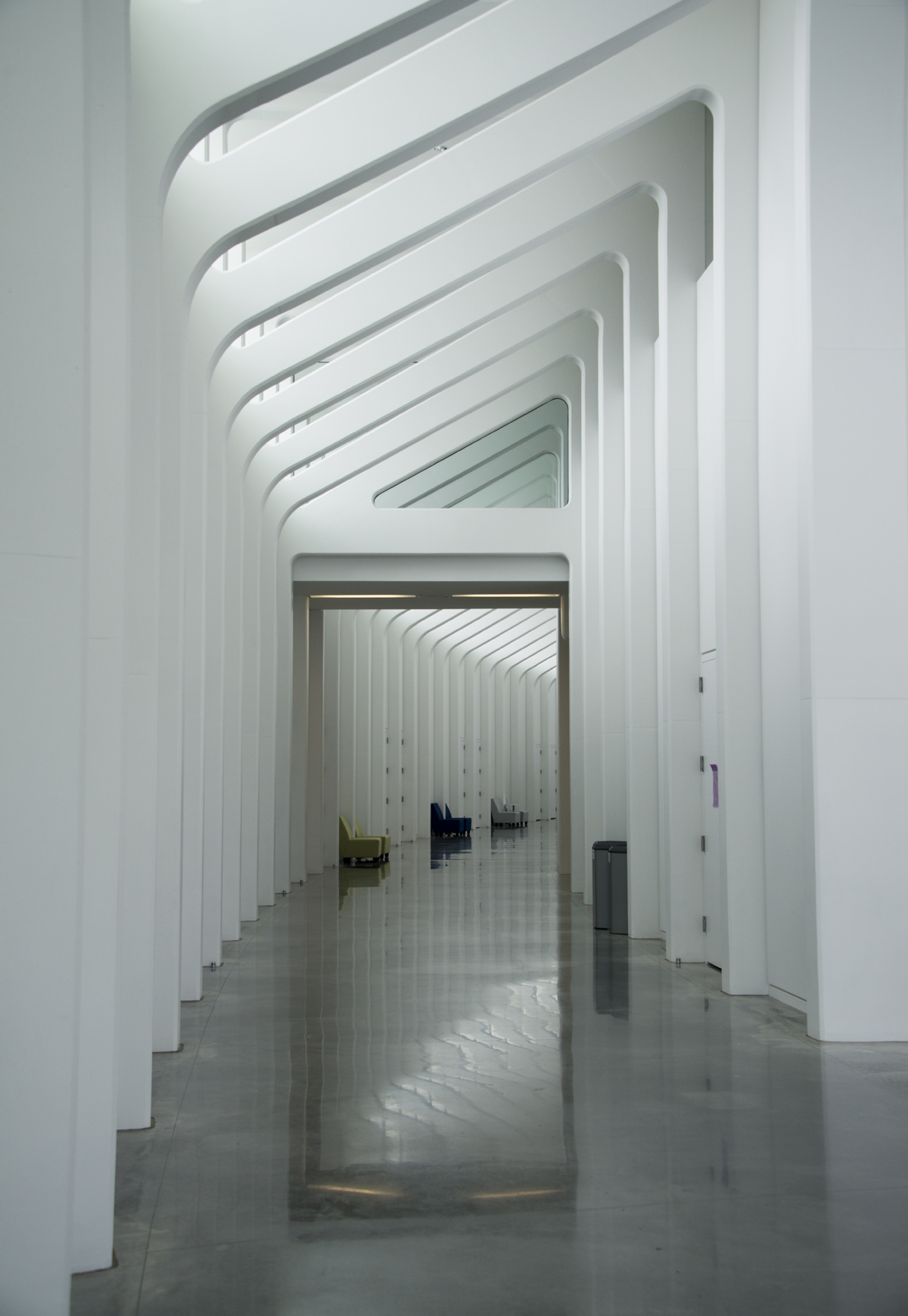 I love the punctuation of the colored seats at intervals in the corridors, which followed the oval shape of the building just inside the outer walls. Between the corridors in the center of the structure are glass-walled labs and technical classrooms filled with high-tech equipment – totally fitting for this steel marvel. 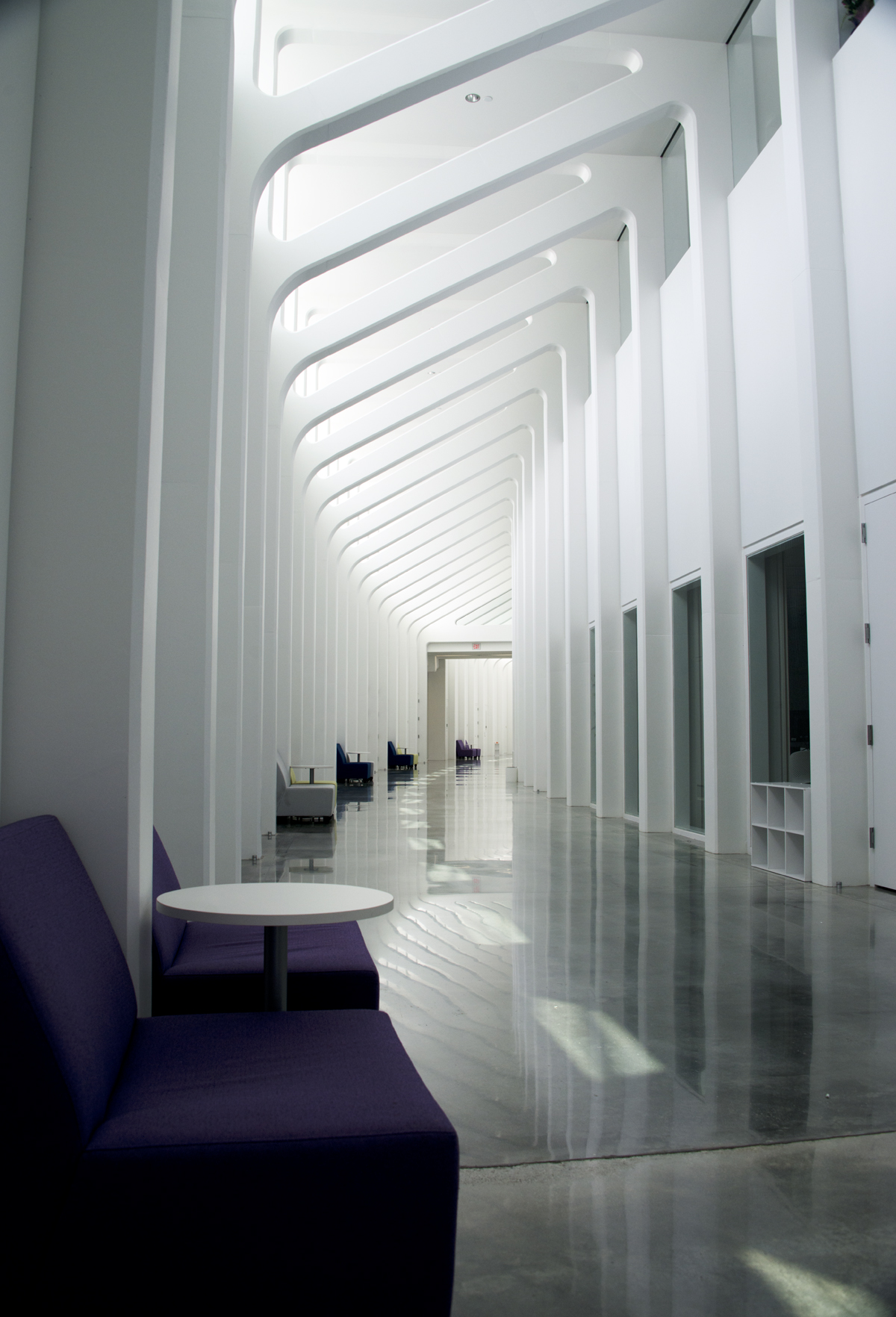 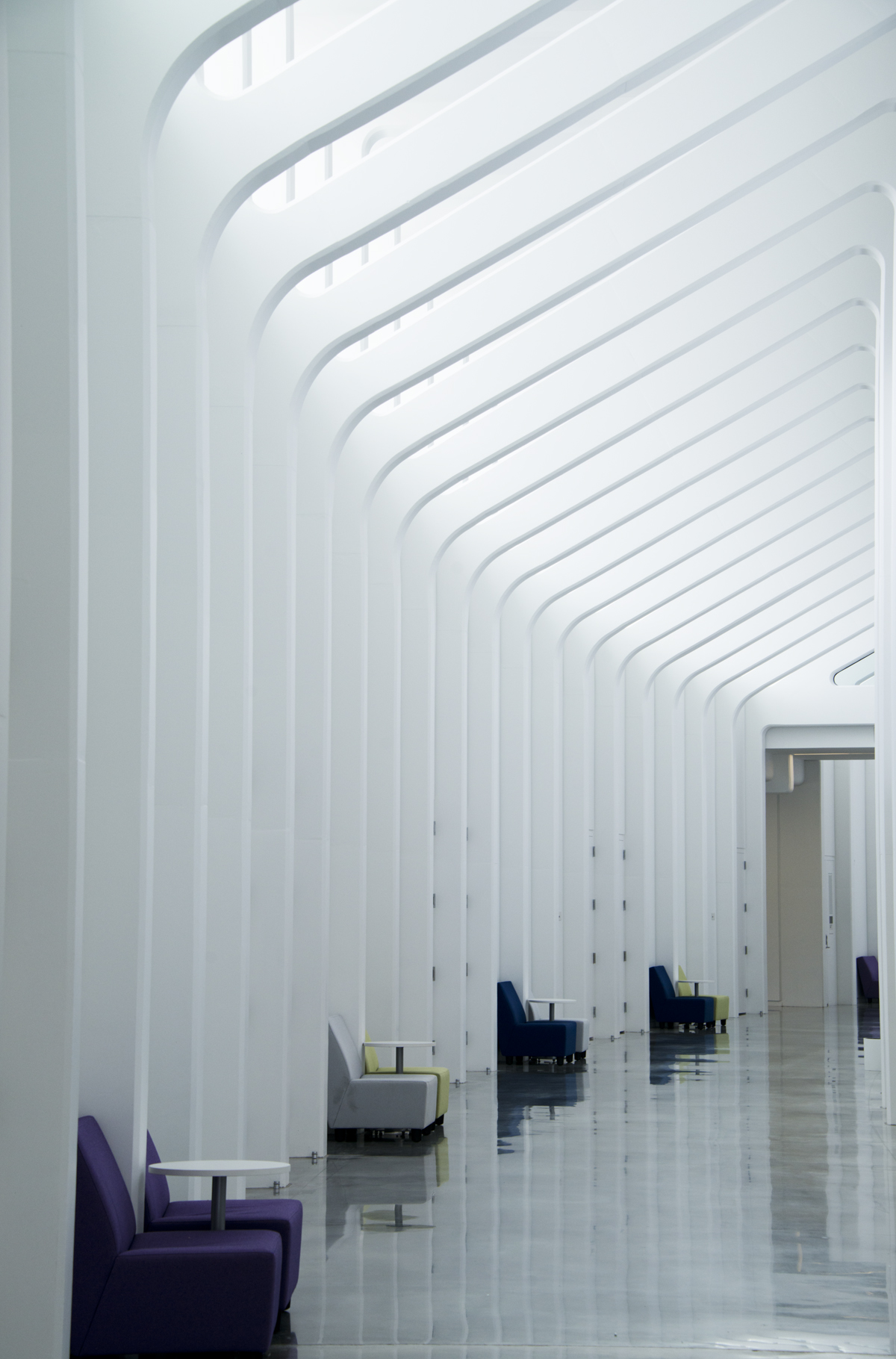 I love this shot of the model of the building in a glass case that reflects the actual arches and lines of the real-life building: 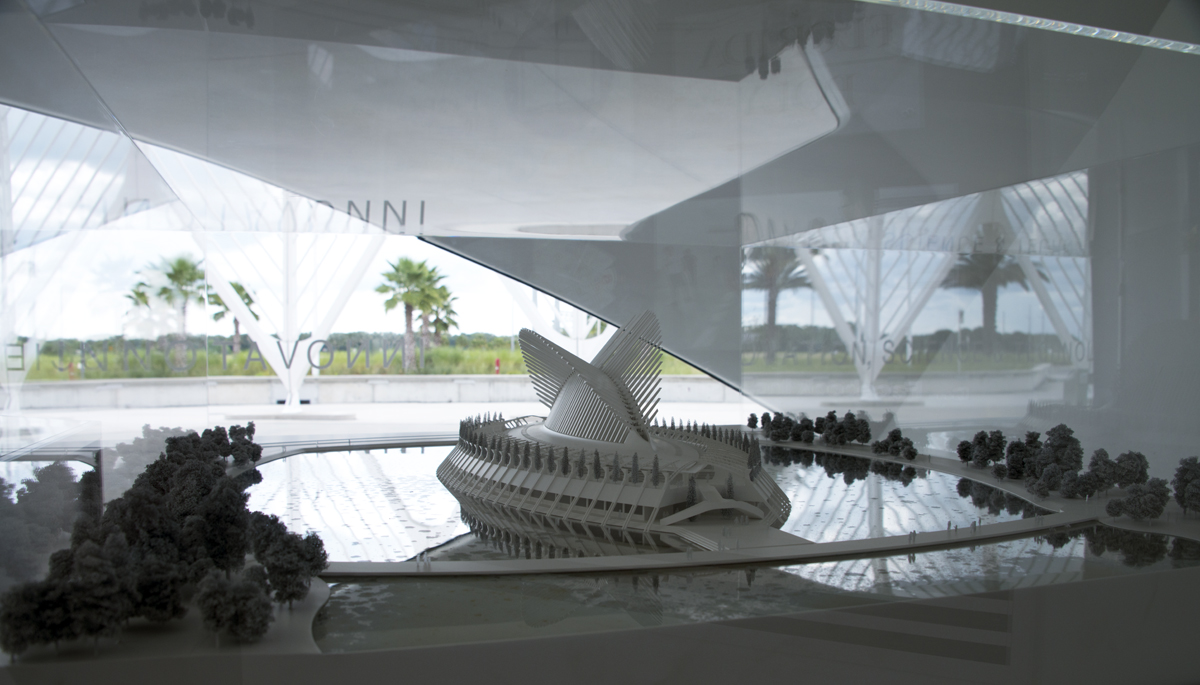 To my surprise, we found a stairway on the opposite end of the building (front) leading to a second level. I think this picture looks very art-deco: 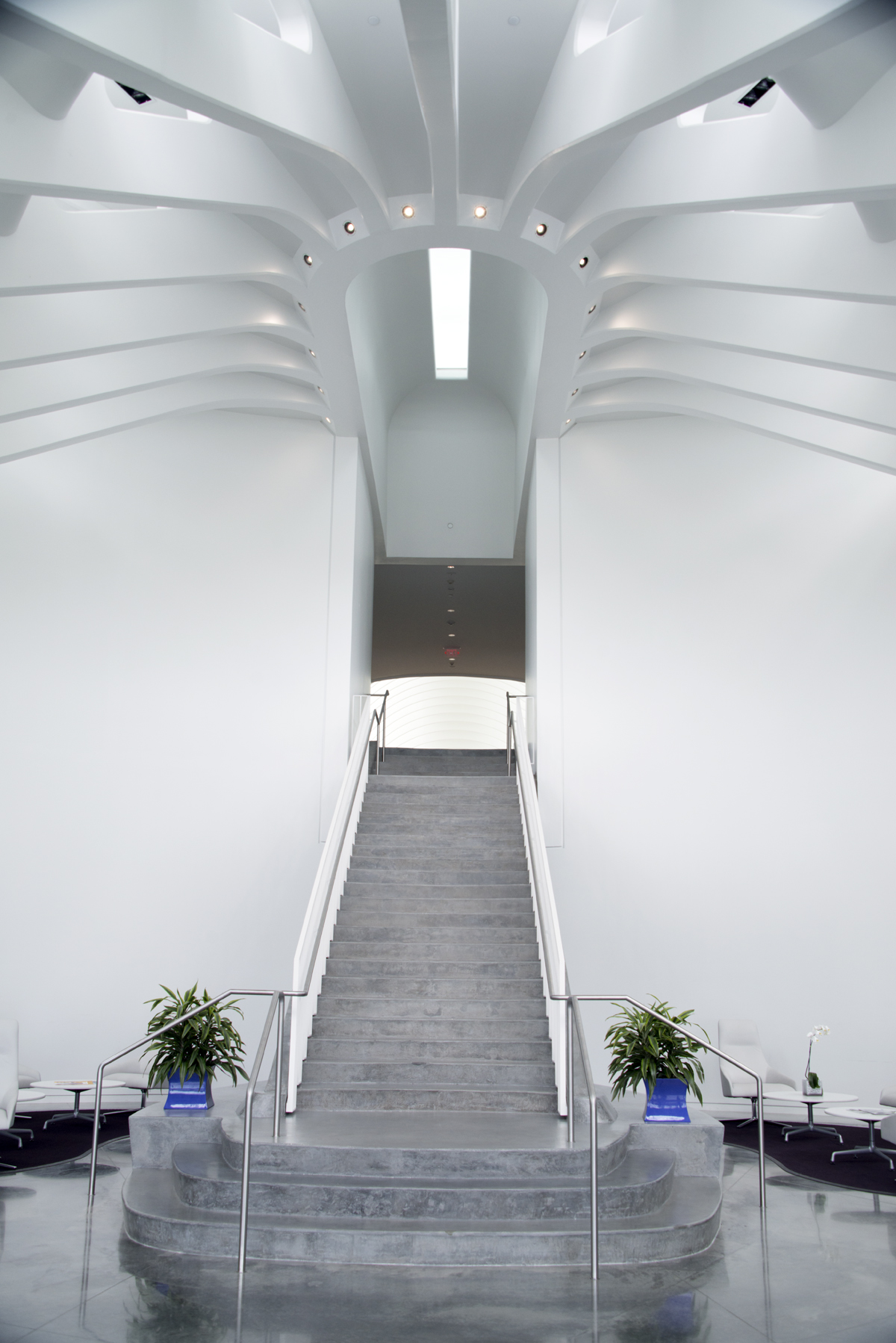 Up there we found the library, which boasts not a single printed book, but lots of computers. Also lots of desks, tables, cubicles, electrical outlets and several chess sets. 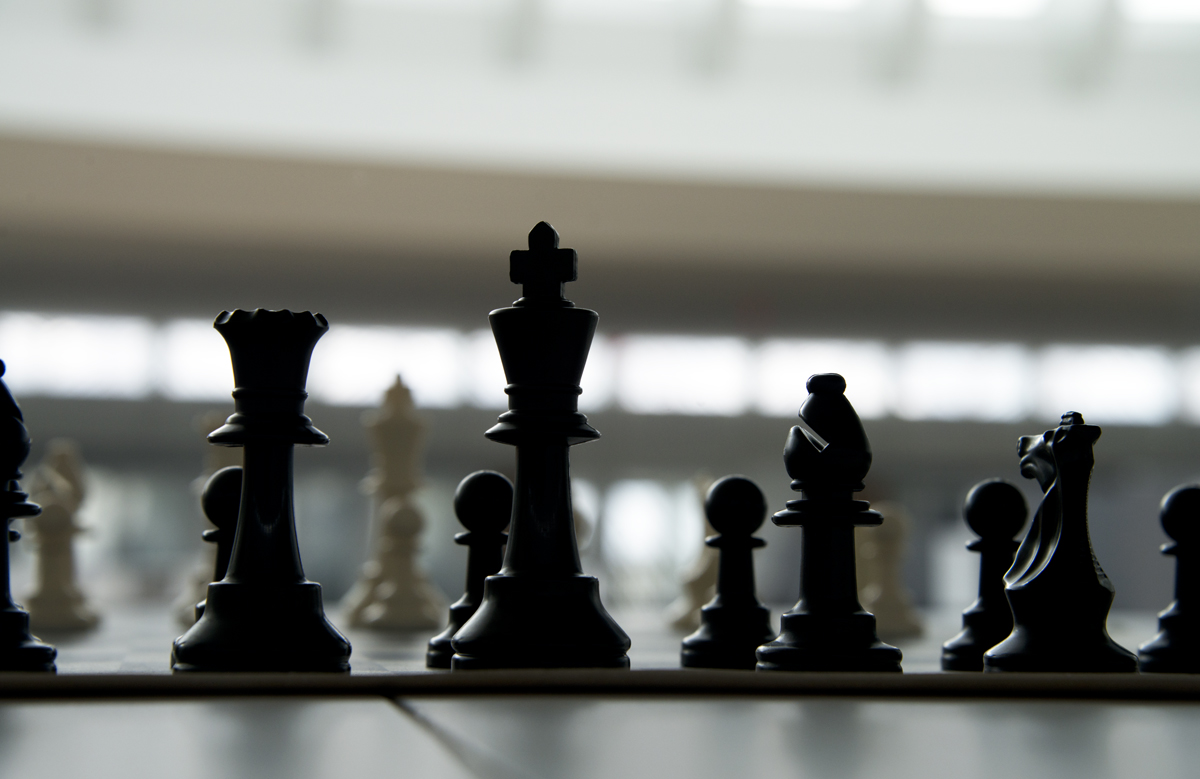 There were offices around the perimeter of this great, echo-y room. Overhead were more stark white ceiling struts supporting the glass of the roof. You can see the louver panels in this shot. I stood in the middle of the room and shot straight up: 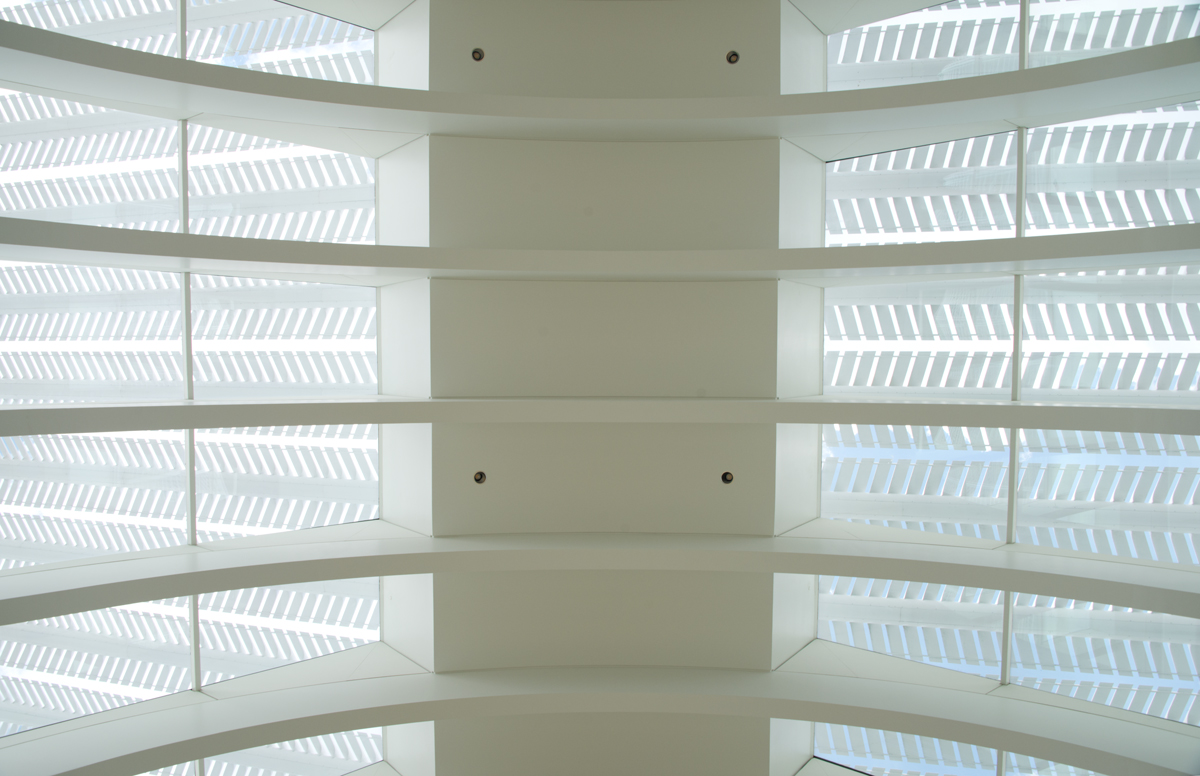 The louver “wings” atop the building can be moved via a hydraulic system to shield the sun from the roof. While we were there, we thought a sudden hailstorm had arisen. Turned out to be the louver panels moving. Quite noisy!

The building was opened to students in 2014 after the university spent about $60 million for it. I’ve seen a Dodge Ram commercial with tough, he-man pickups roaring about a construction site with this marvelous building in the background. It was evidently filmed before they put in the reflecting ponds.

Eventually we exited through a side door to the second-level deck where we could see the origin of the outer arches. Here you can see a louver panel above the arches: 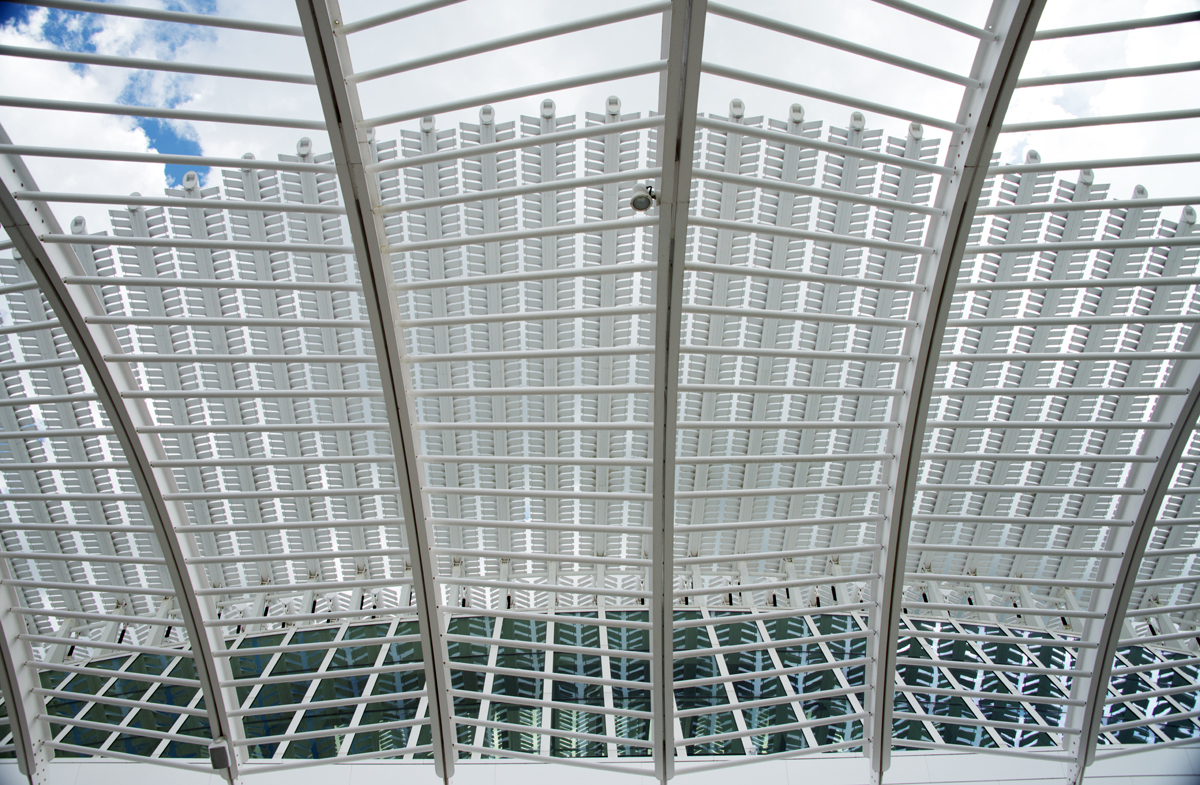 Even the benches and trash cans were ultra-modern molded plastic in white. Here’s the second-level deck: 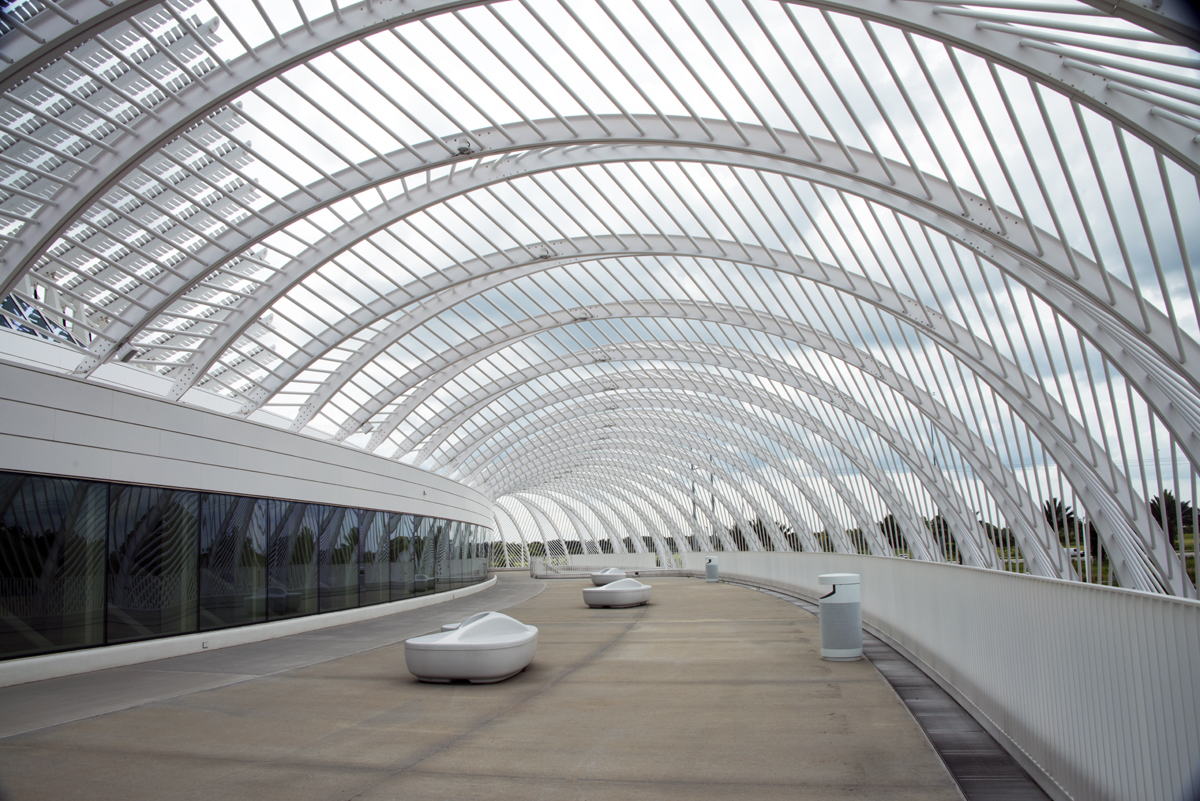 The building’s appearance constantly changes with the weather. Here’s a shot of the same deck when the sun forced its way through the gathering clouds: 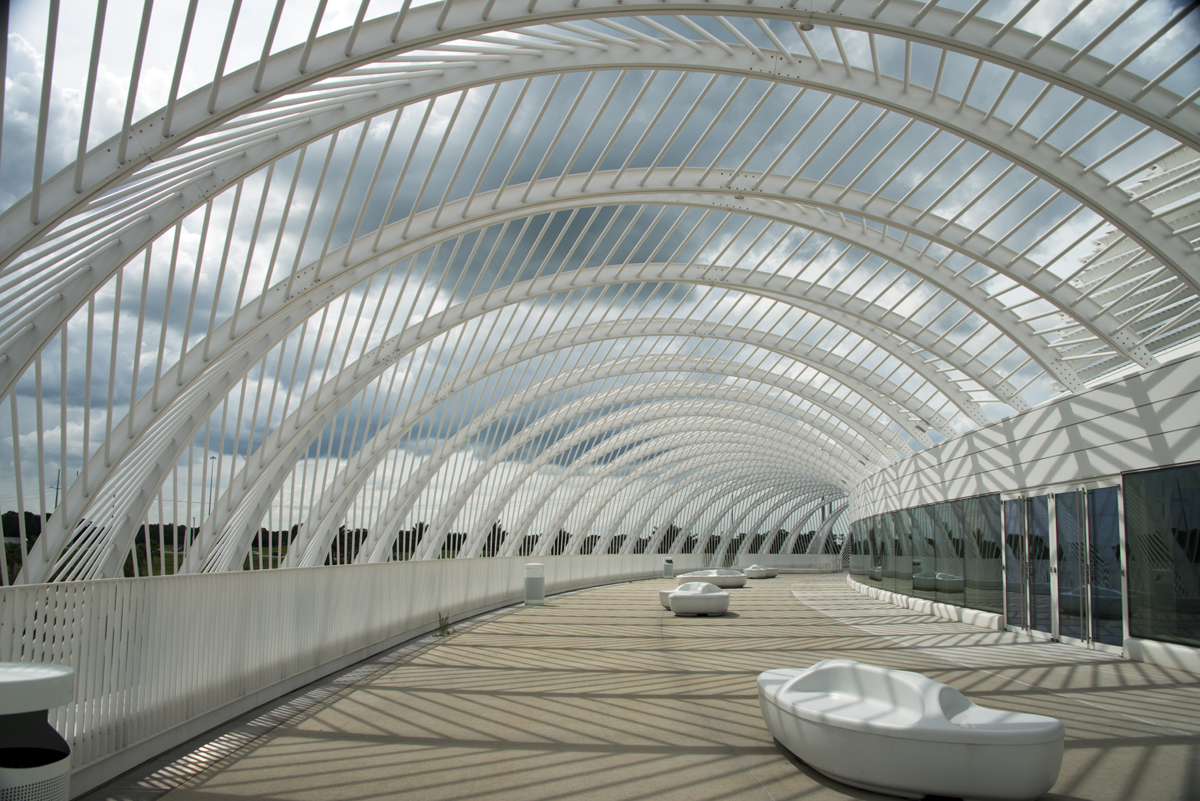 Even the shadows contribute to the overall symmetry. Wow! Then I saw these ferns growing up through the drainage grates near the outer wall of the upper deck (see above on the lower left): 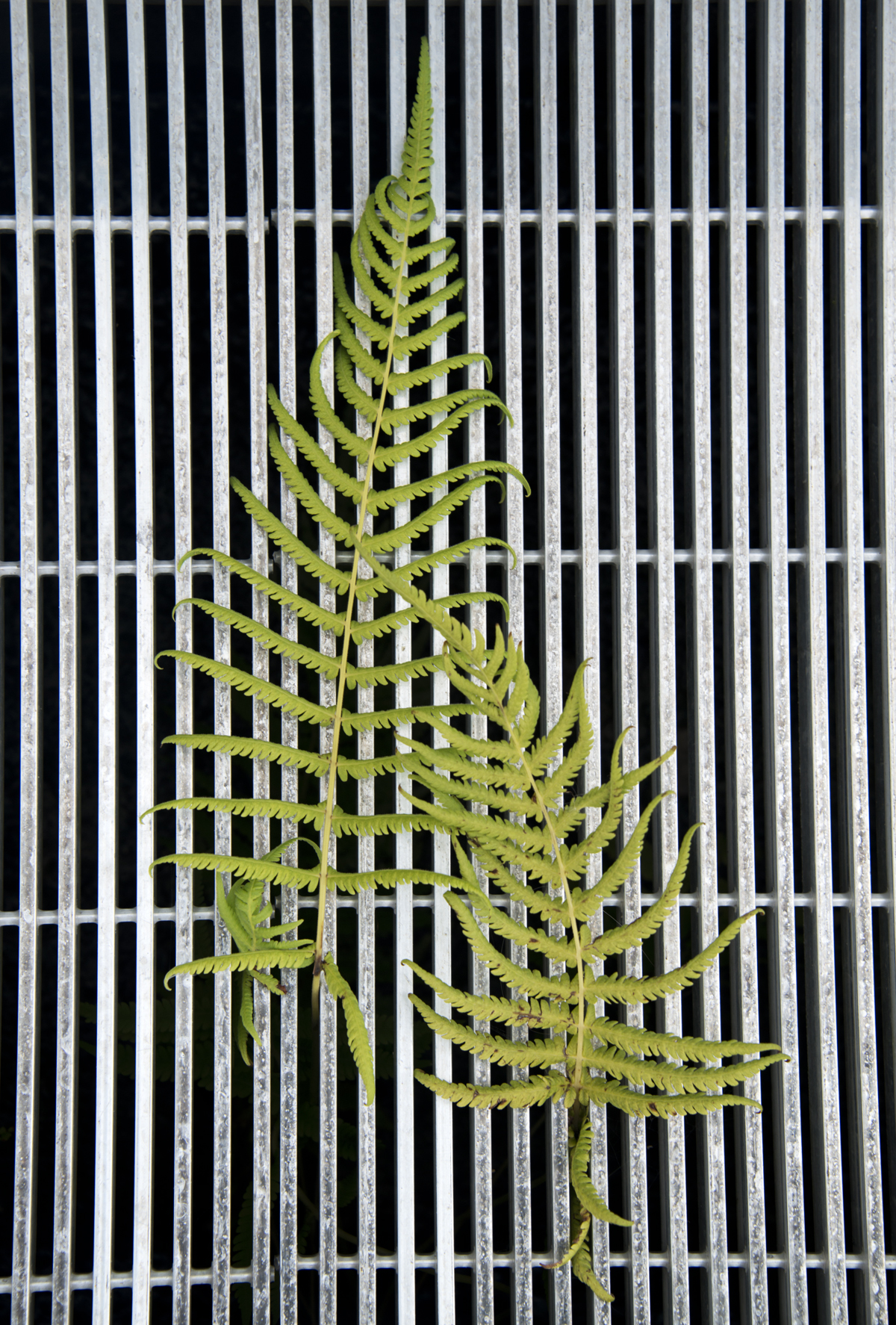 The ferns’ curves against the grate also reflected the design! I truly don’t think that was part of the overall plan, though.

Another iteration of the arches on the top deck: 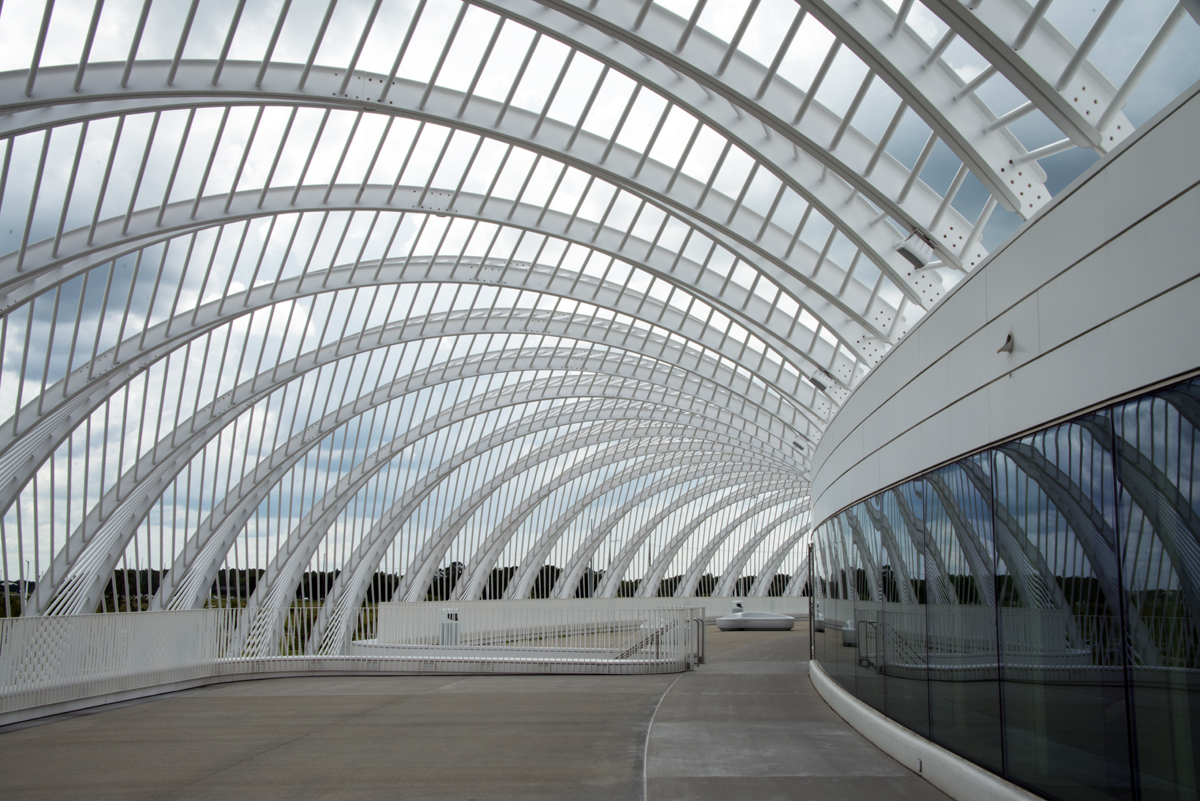 I made my way down a side staircase and noticed that the reflections in the glass upstairs continued the design. Was this on purpose? I don’t know but it’s so impressive! 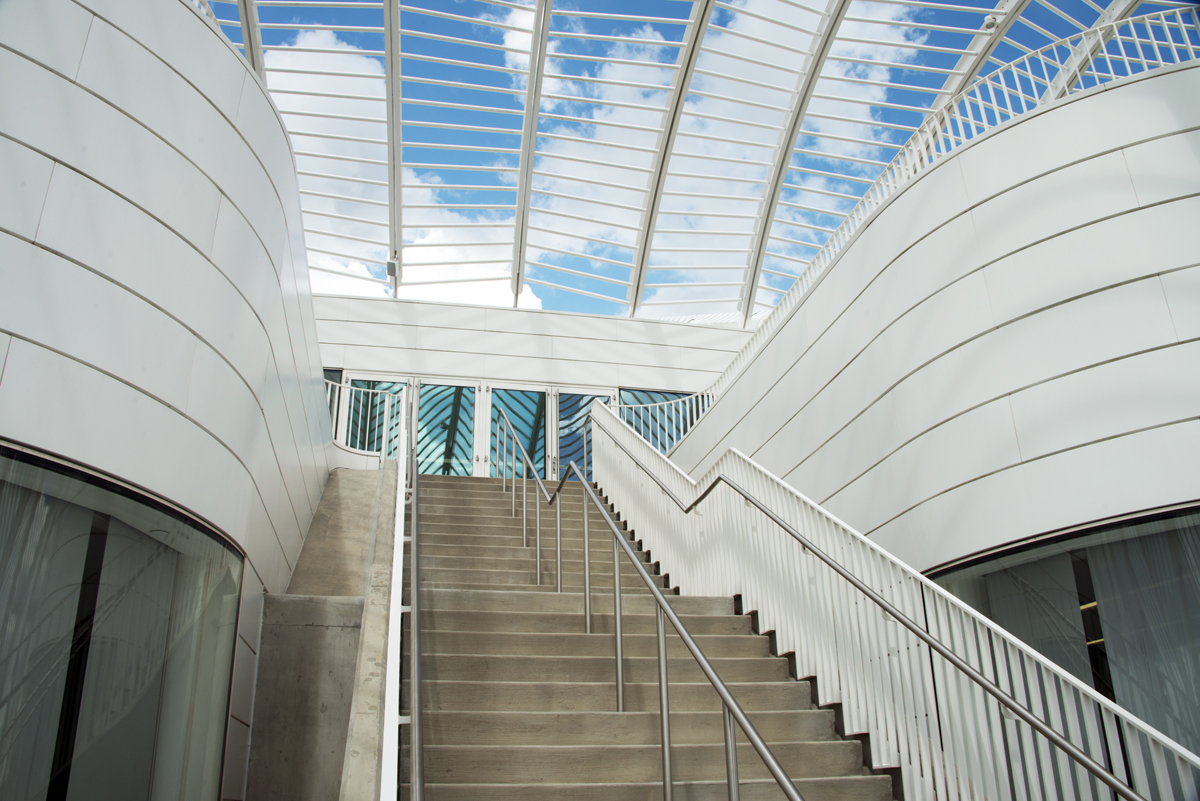 Rather than stay there and get heat stroke, we decided to visit the nearby Cracker Barrel and wait on sunset, which was about 8:30 that day. At 7:30 or so we headed back to campus, but by then menacing storm clouds were gathering: 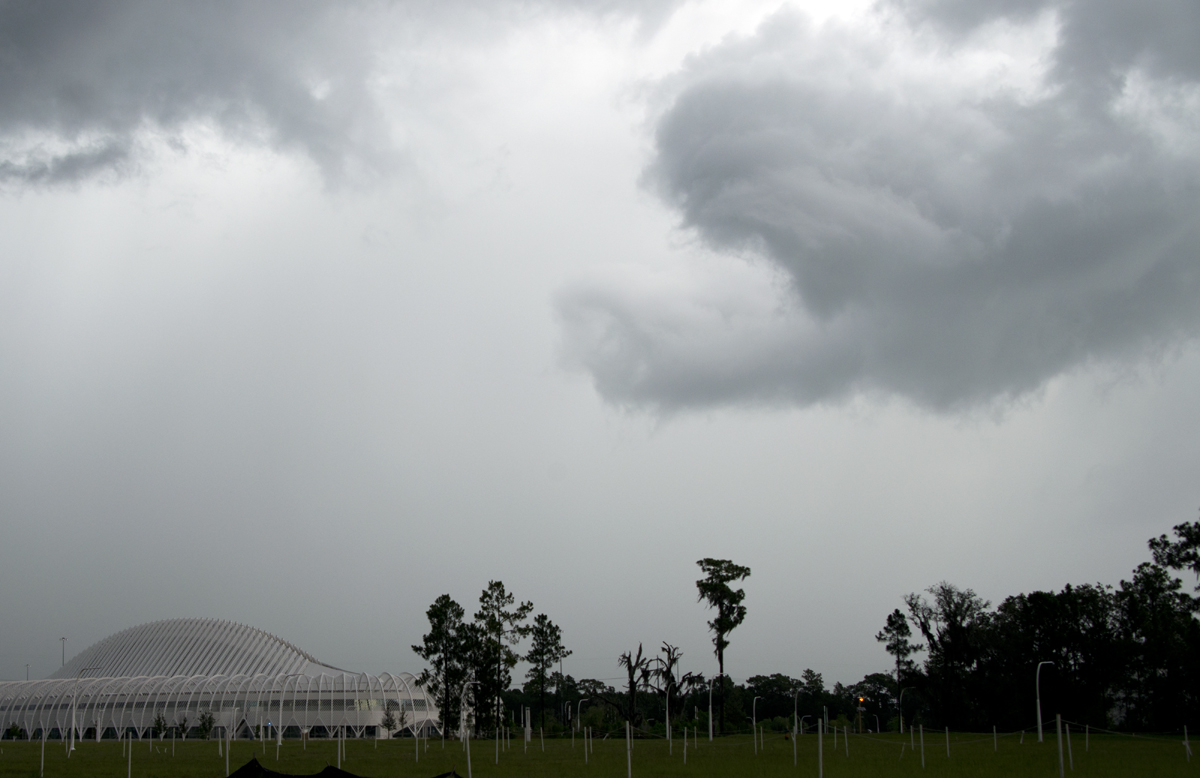 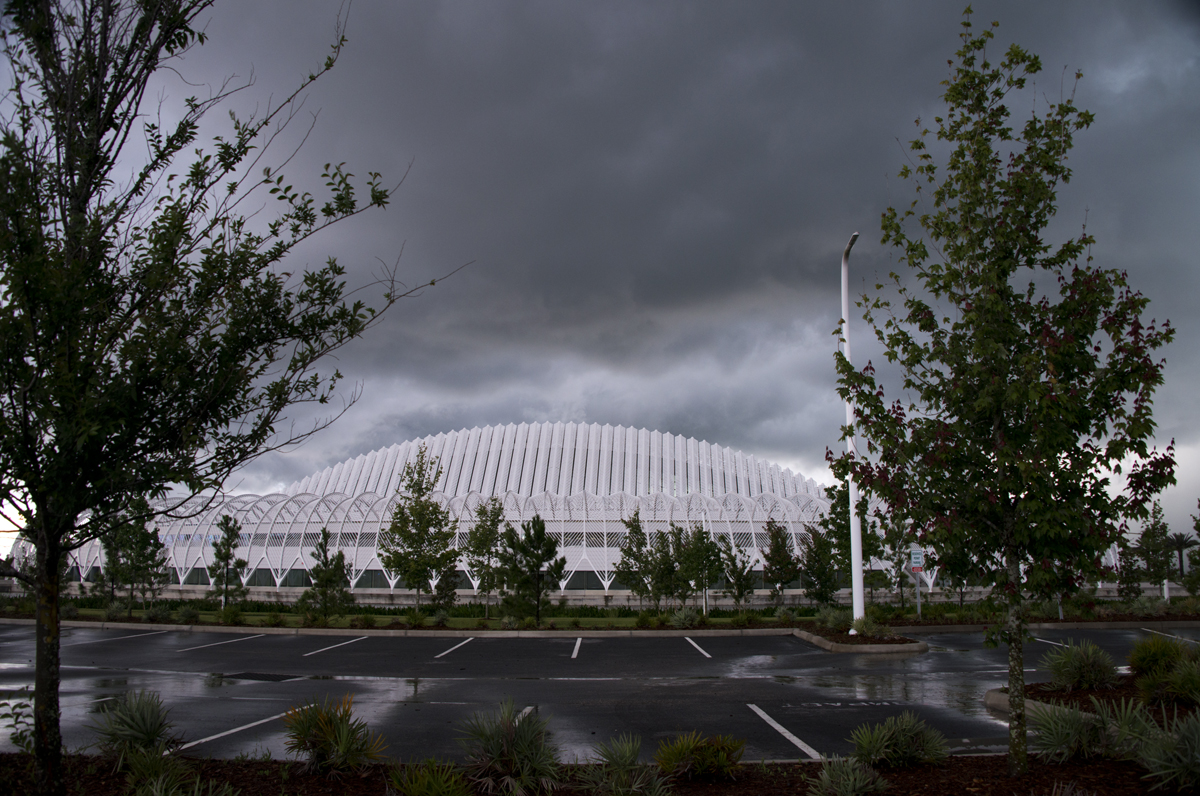 We waited out this very nasty storm in the car, antsy to be out photographing and wondering aloud and often whether we would be able to even see the sunset. Eventually the storm moved on, but we did not get direct light from the sunset. So we didn’t get to photograph the rays coming through the arches as we’d hoped. Instead, we got other dramatic pics like this one: 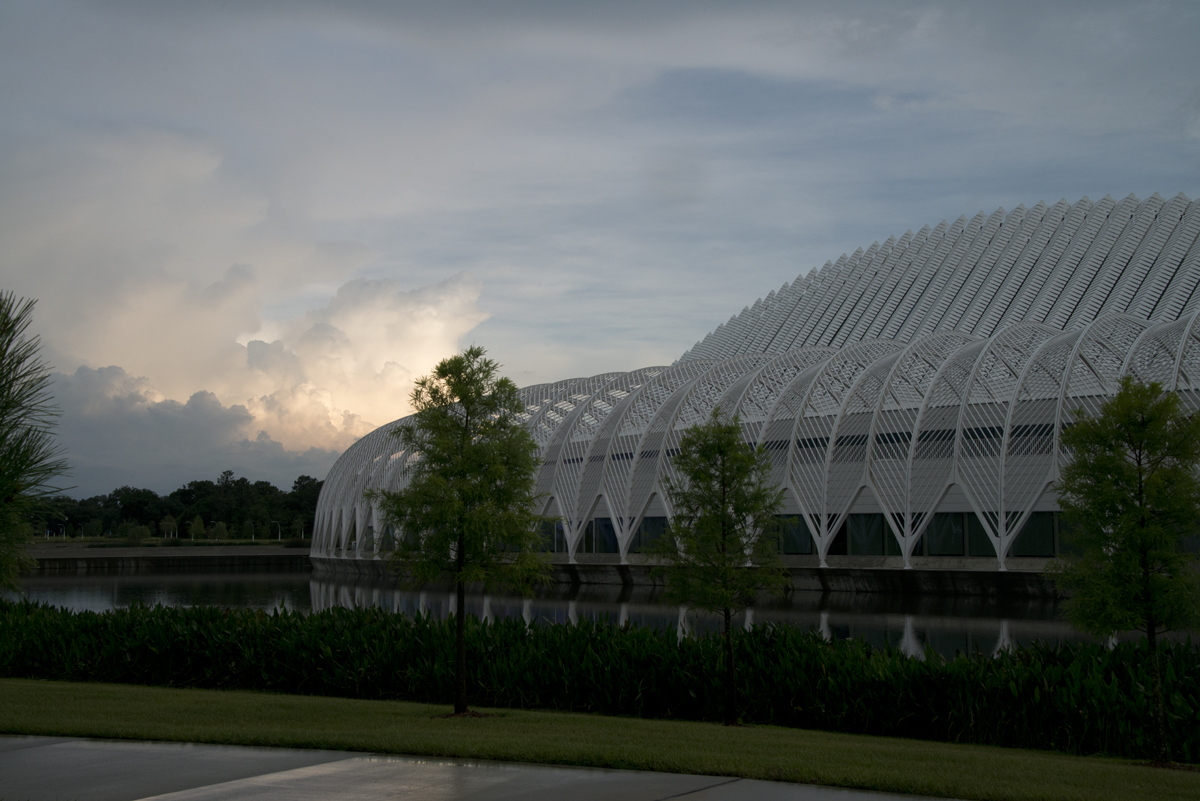 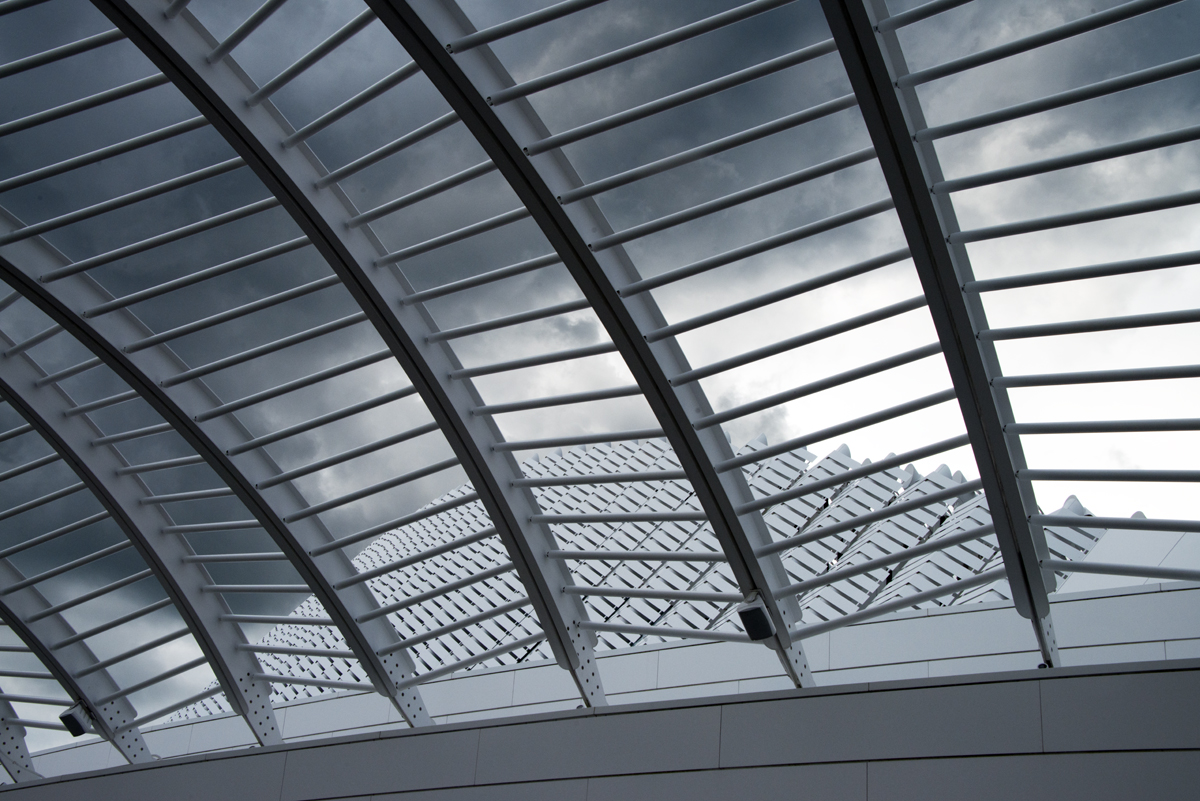 But then Paula noticed the rainbow! Boy, we hoofed it all over and around the building to get rainbow shots before it went away. It stayed quite a while, and even brought a double along! 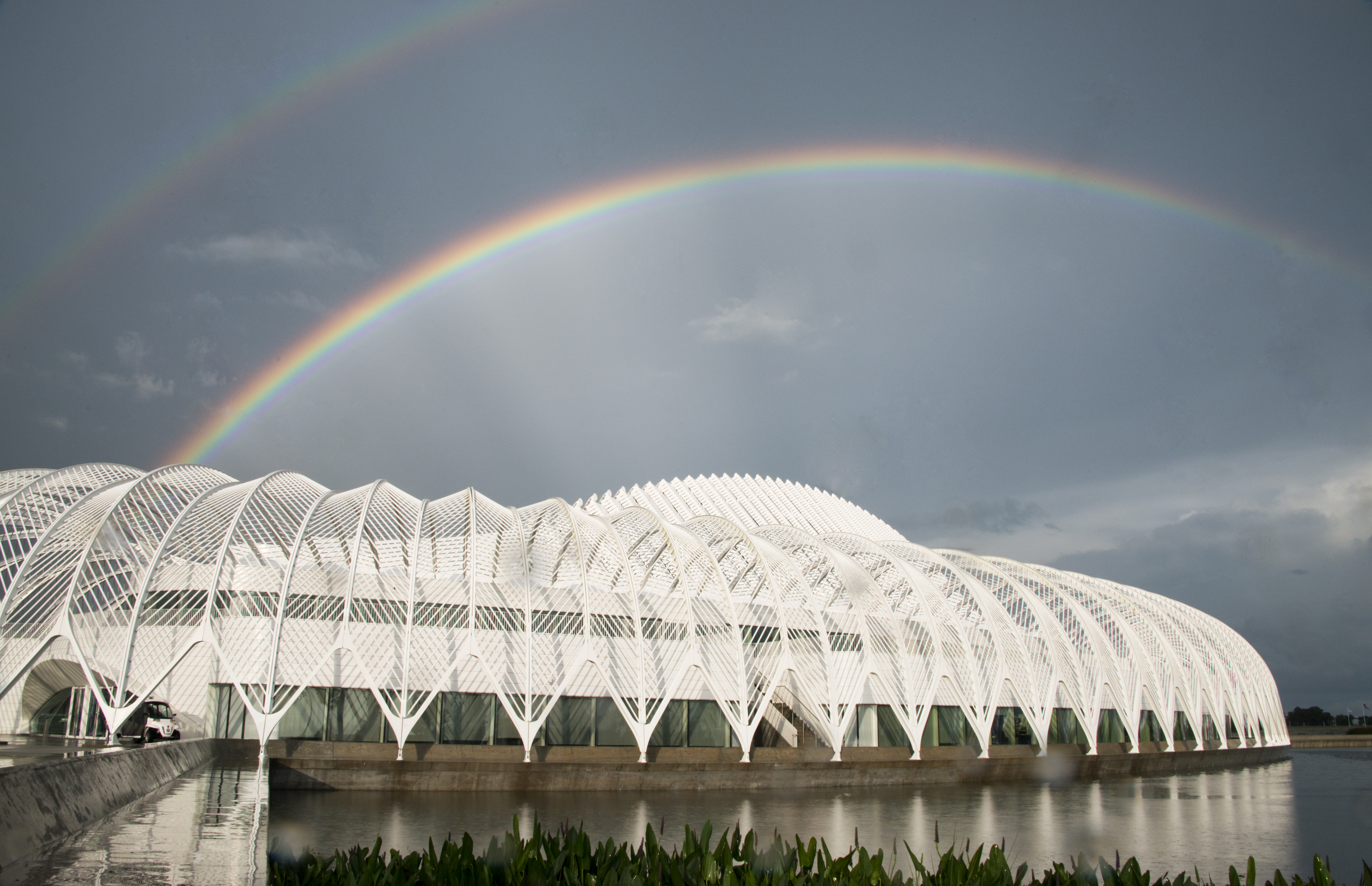 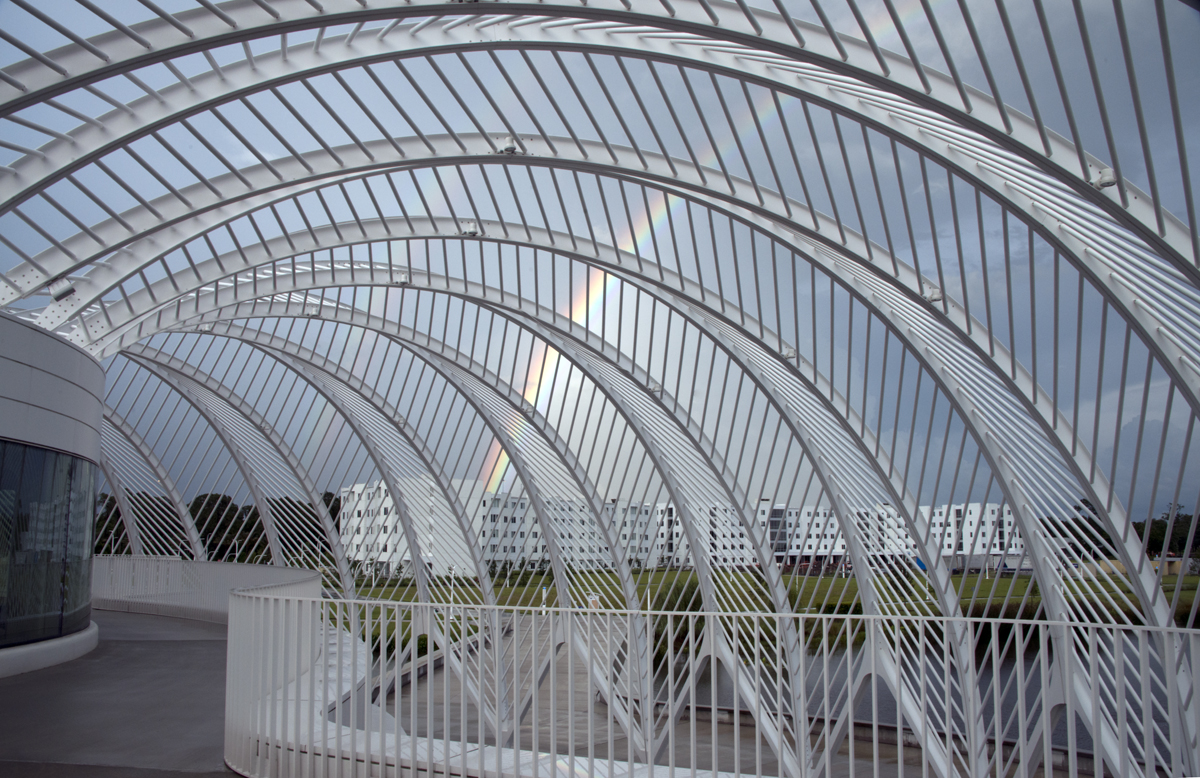 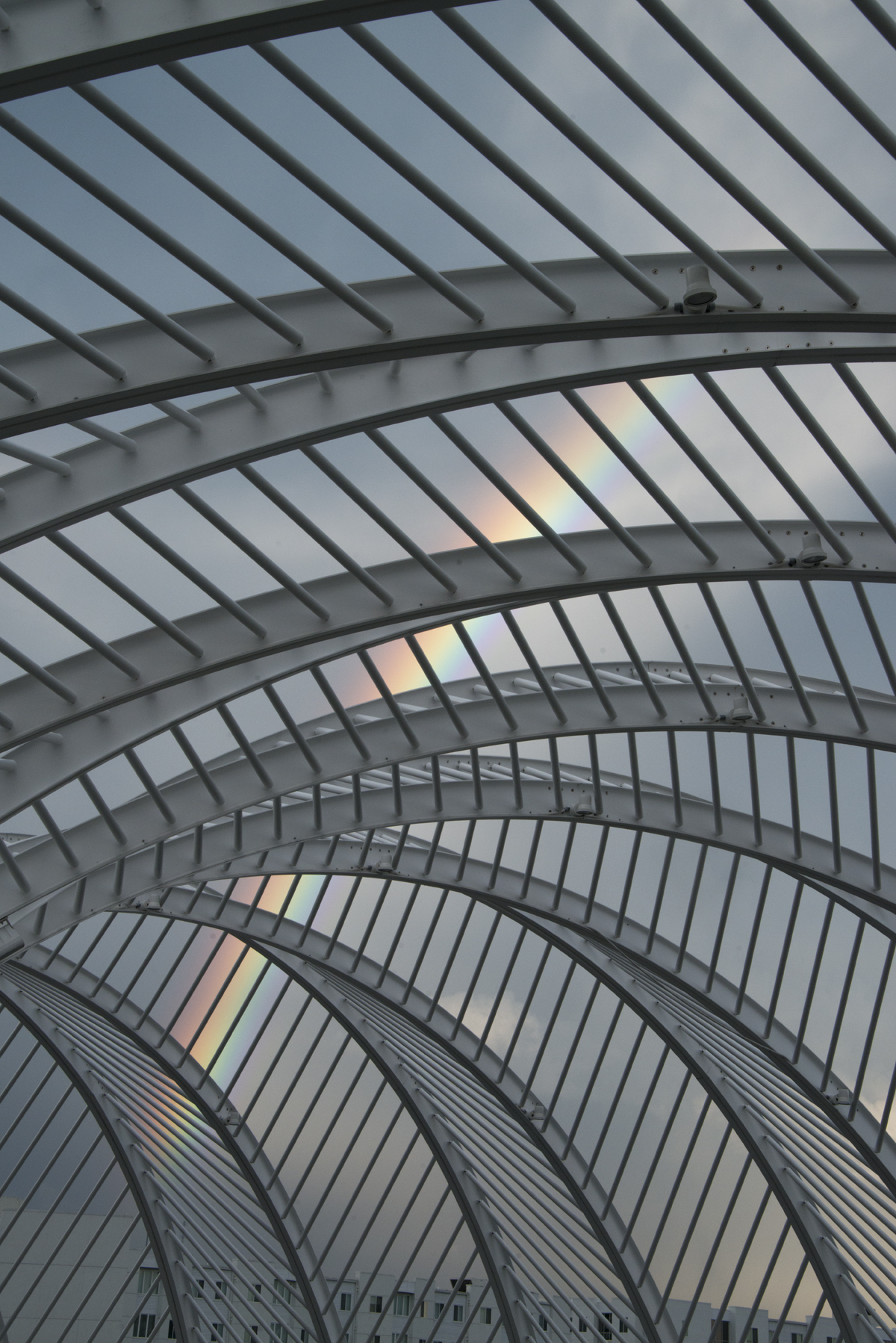 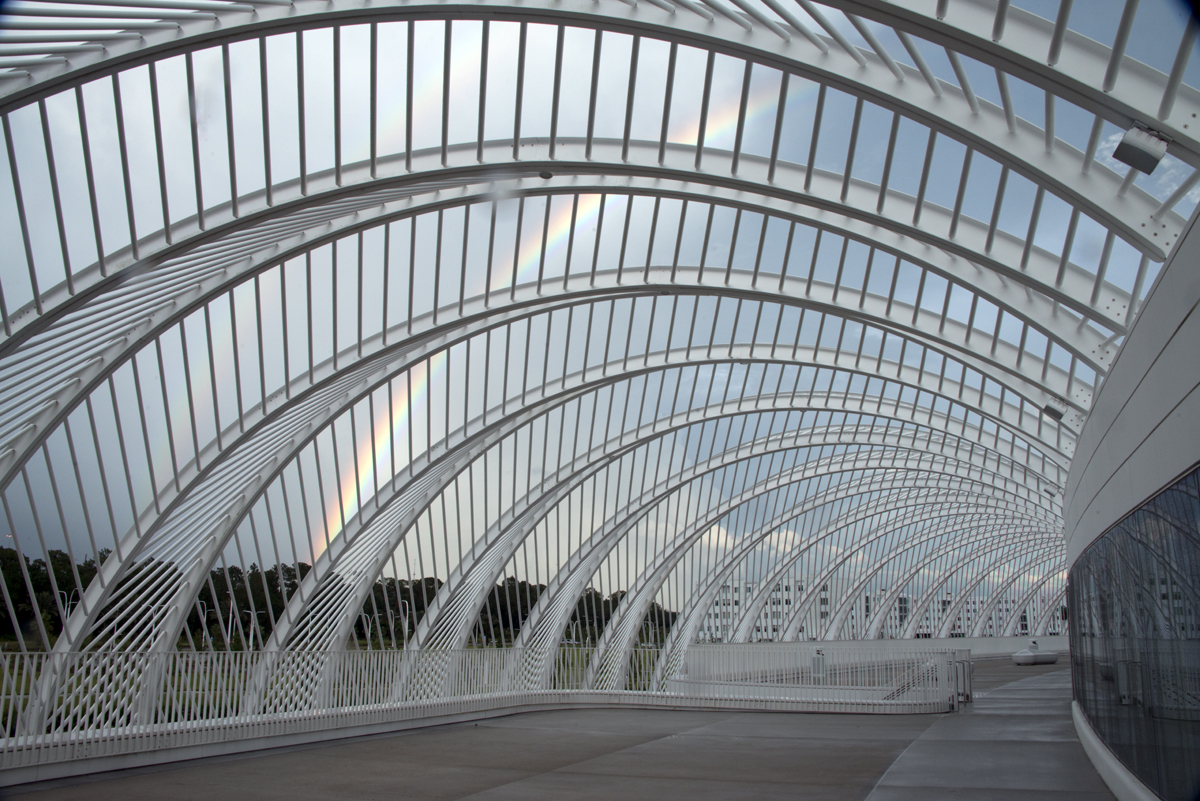 The IST is lit at night, so we ventured to the far end of the first reflecting pool at dusk. I set up directly across from the IST and got this shot: 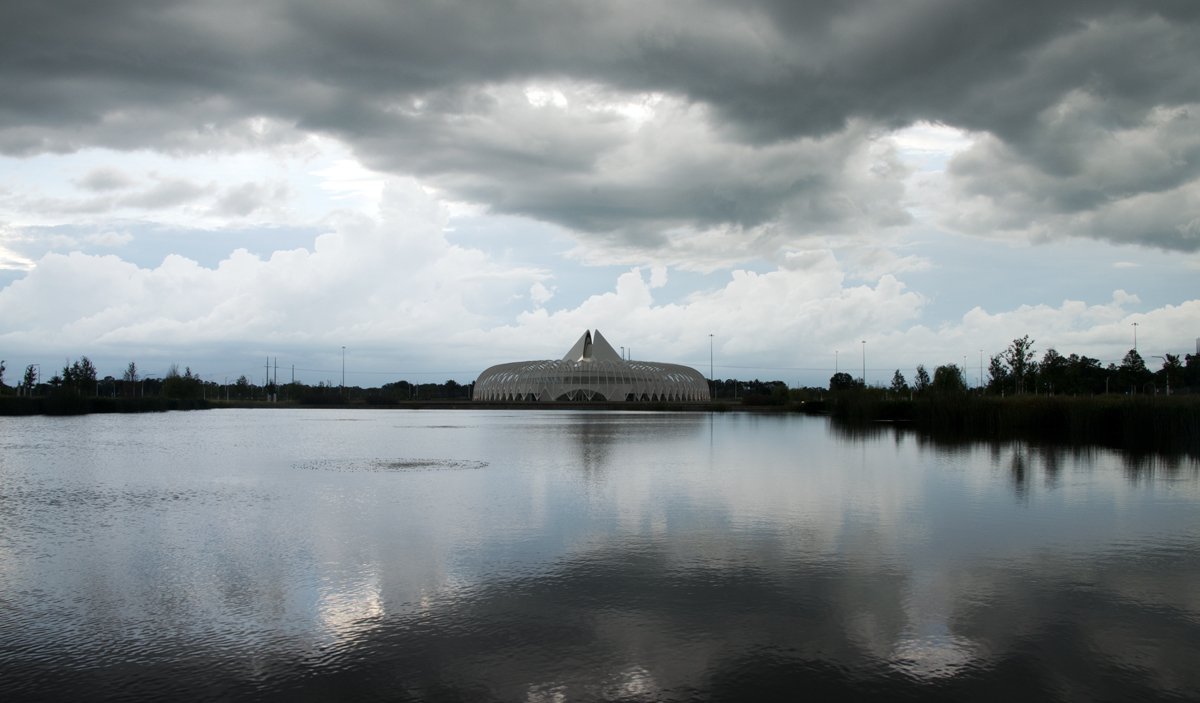 We didn’t stay much longer than this, so I didn’t get a shot of the building all lit up in darkness. The reasons involve a combination of alligators and police officers, which I won’t go into here. However, we came safely home in a timely manner, exhausted but quite happy with our images. But I’m still going back for that night shot some day – when it isn’t so freaking hot!

A word of thanks to Crystal Lauderdale, Director of Marketing and Communications at Florida Polytechnic, for her quick and patient responses to my emails in preparation for this excursion. She made us feel welcome before we even showed up on campus! 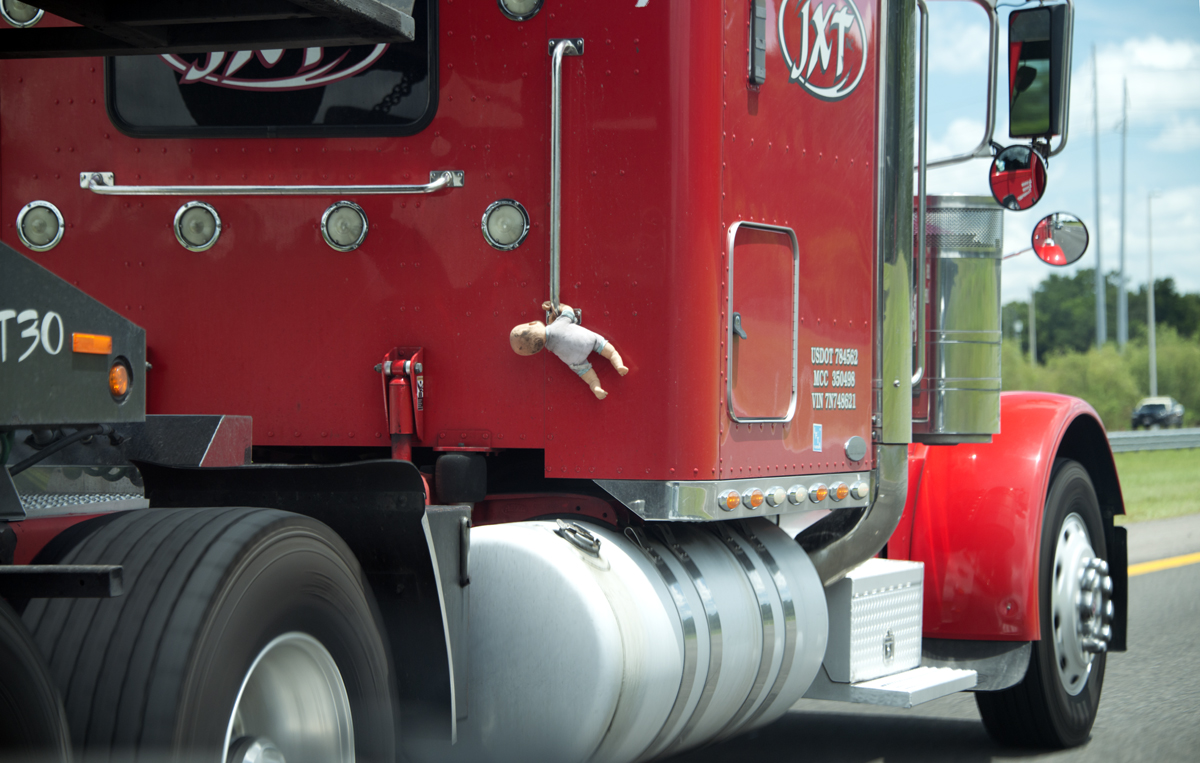