On Easter weekend this year my husband and I spent a few days in St. Augustine, Florida. I’d visited there before, but never to stay overnight. It’s the “oldest city” in North America (read, “founded by Europeans”). My favorite and quite specific description of St. Augustine’s history is delivered by Wikipedia:

It is the oldest continuously occupied European-established settlement within the borders of the contiguous United States.

Pedro Menéndez de Avilés, a Spanish explorer, founded St. Augustine in 1565, so we’re talking lots of Spanish architecture and a real European feel. Its cobblestone streets are quite walkable and it’s all about the tourists these days.

Among many activities that weekend, we took a boat tour with the Scenic Cruise line. The company has a ticket office in the Municipal Marina on the waterfront; after you get your ticket ($18 each) you can walk directly out onto the dock to your boat.

The most eye-catching ship out there is the Black Raven, also a tourist sightseeing boat, complete with pirates as crew: 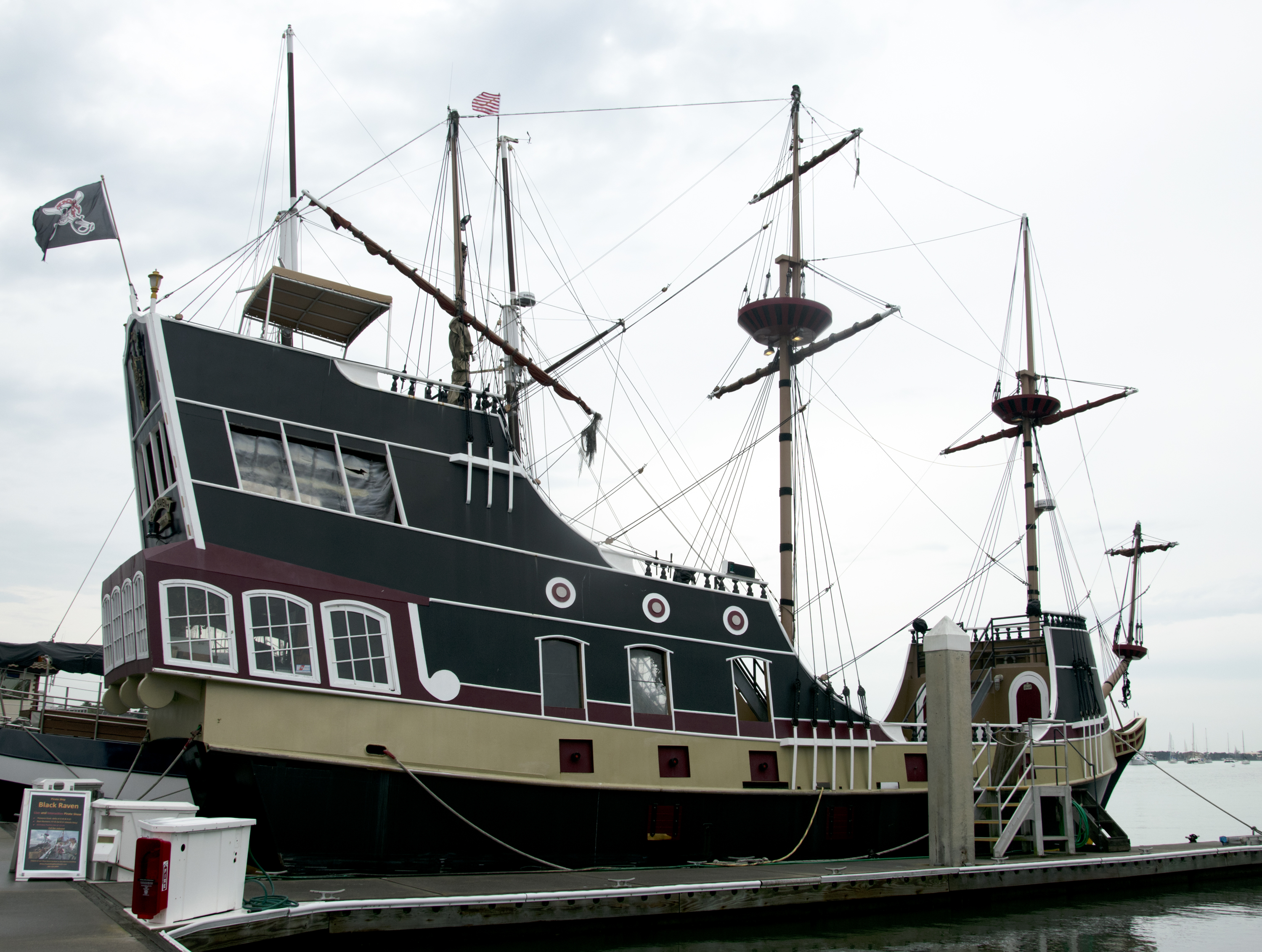 Then there’s the Freedom, which delivers a sailing adventure. 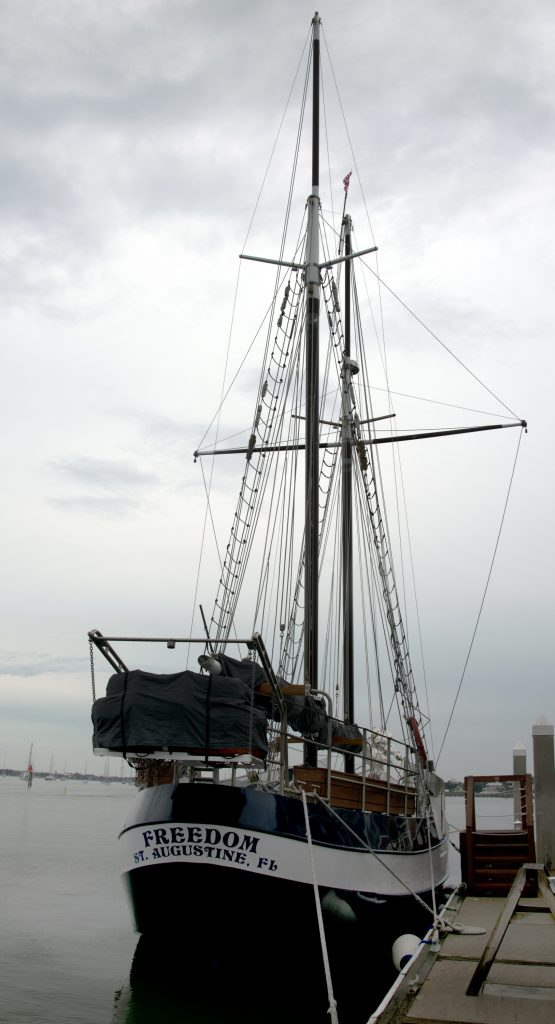 We considered the Freedom, but the weather was iffy that day and no one was sure if it would actually sail. In fact, you can see from these photos that the weather was threatening to be bad – I’m not in love with the light quality in these shots by any means, but they give you a good idea of our tour.

Instead, ours was a humbler vessel, the Victory III: 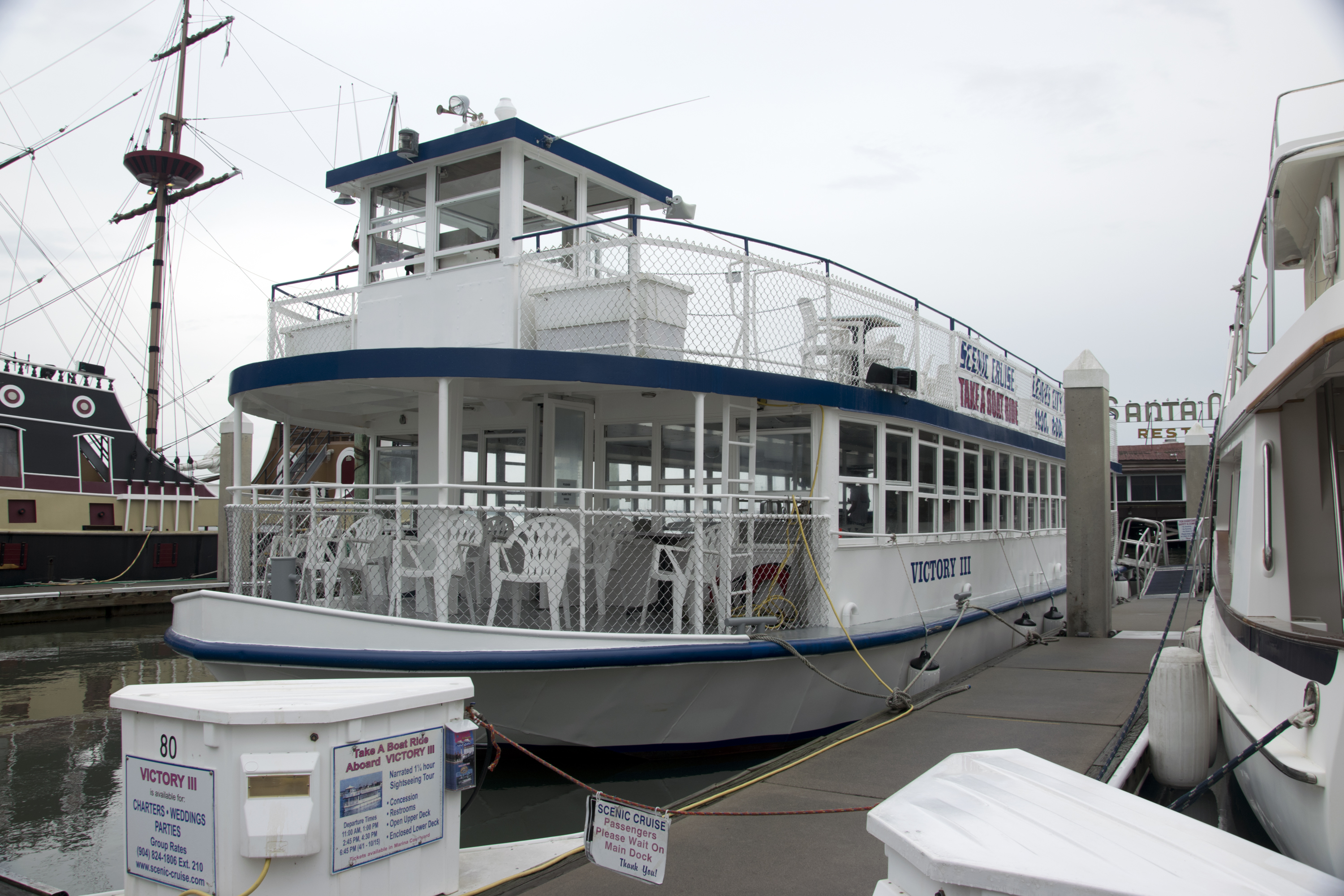 It wasn’t as exciting-looking as some of the others, but there was plenty of top-deck space for us gawkers: 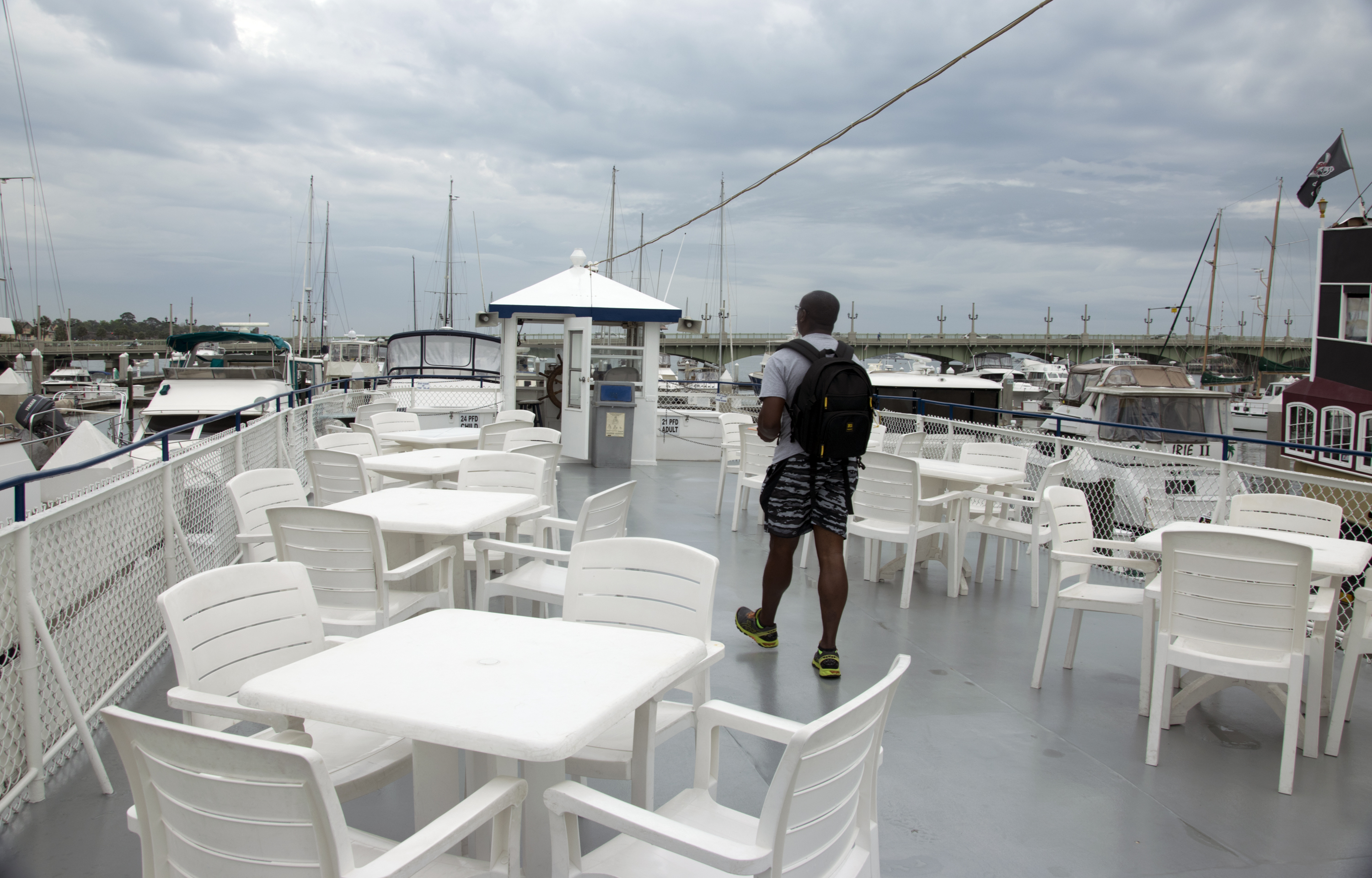 In fact, we ended up on the lower level with two seats right on the bow. The tour lasted about an hour and 15 minutes. As we cruised the intracoastal waterway, the captain narrated historical points of interest in St. Augustine and Anastasia Island. Following is a selection with interesting facts.

First, the Bridge of Lions: 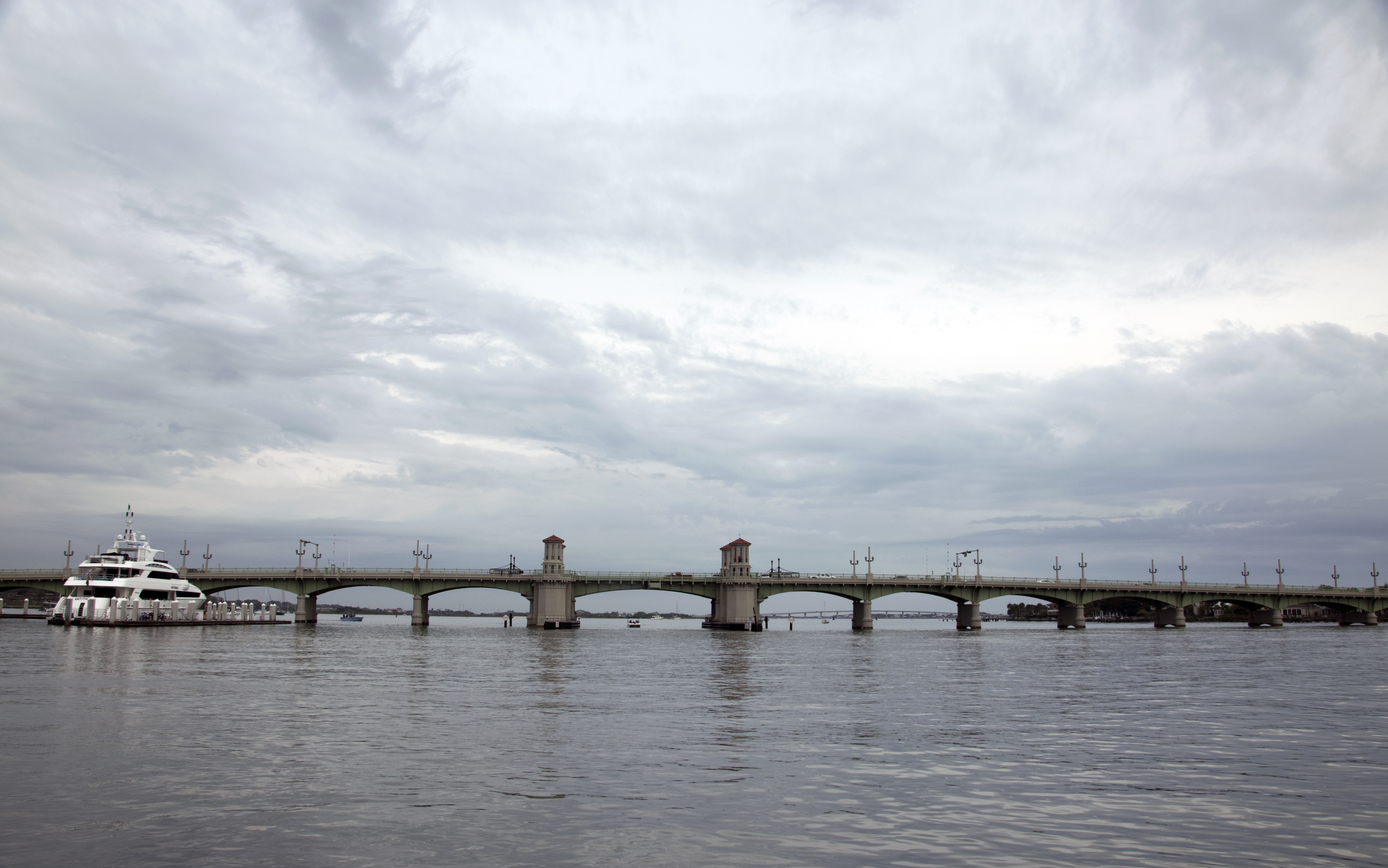 So called because of the two Carrara marble lions flanking the west end of the bridge. 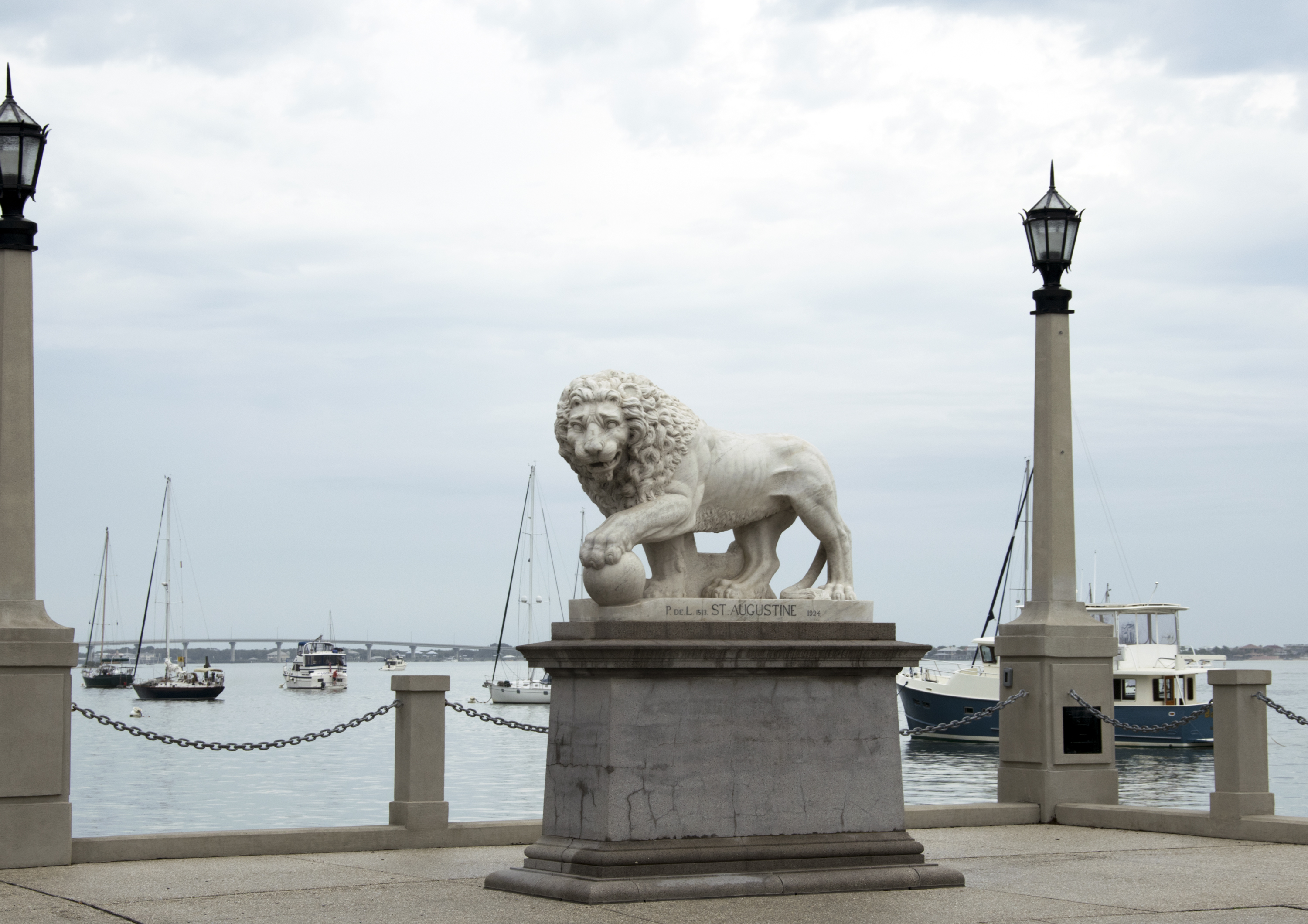 The lions are copies of statues found in Florence, Italy, and were gifted by Dr. Andrew Anderson. I love this guy: he was a physician and philanthropist, as well as mayor of St. Augustine. He used the last 10 years of his life installing public art in the city. Since he died in 1924 and the bridge wasn’t started until 1925, he didn’t get to see the famous lions installed. No matter; his reputation lives on.

I read that there is now a pair of lion copies on the east end of the bridge as of 2015, donated by a resident couple in honor of St. Augustine’s 450th birthday.

The other most prominent feature of St. Augustine’s waterfront is the old Spanish fort, Castillo de San Marcos: 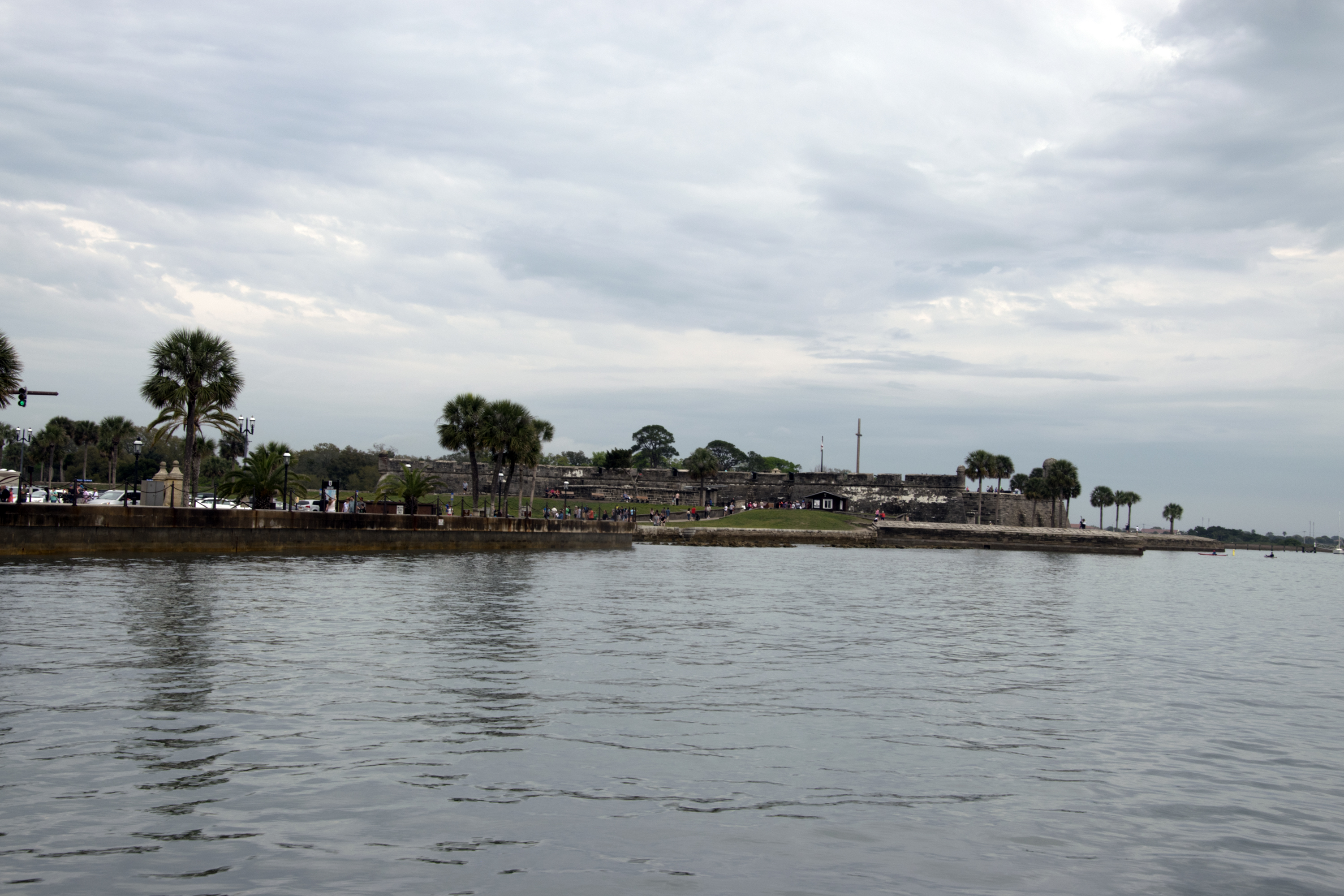 You’ll see this fortress closer up in a future blog post. Suffice it to say there is a lot of coquina, a sedimentary rock with a whole lotta shells in it, and old, inoperable cannon there.

During our boat ride we saw people enjoying all kinds of watersports, from kayaking: 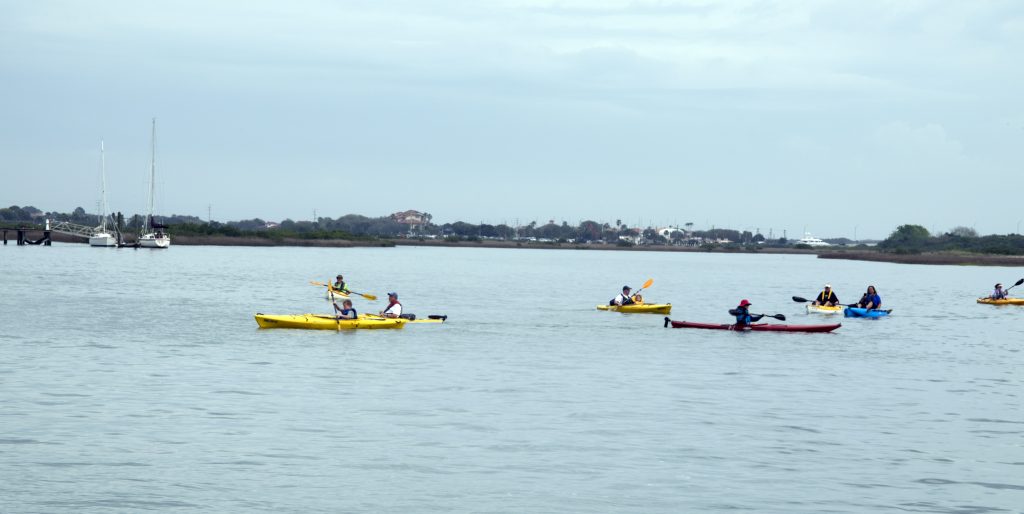 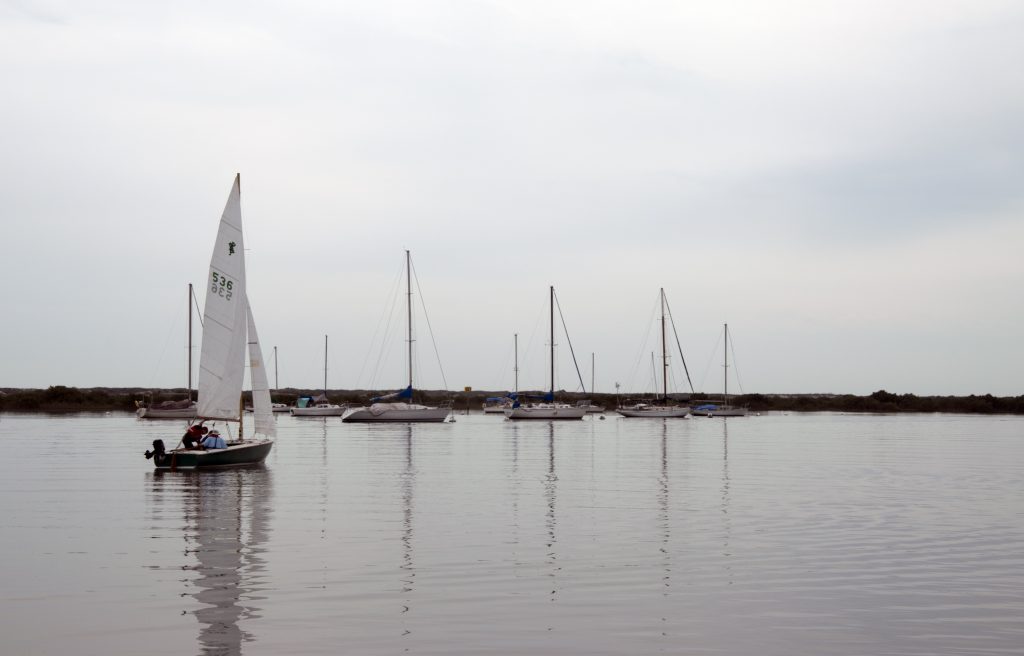 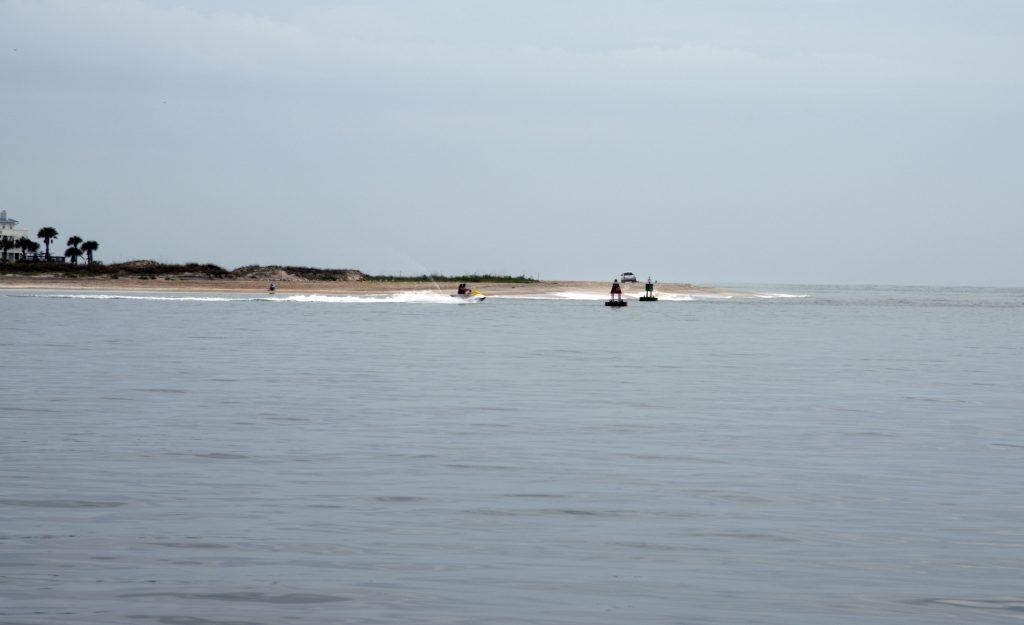 to stand up paddle boarding: 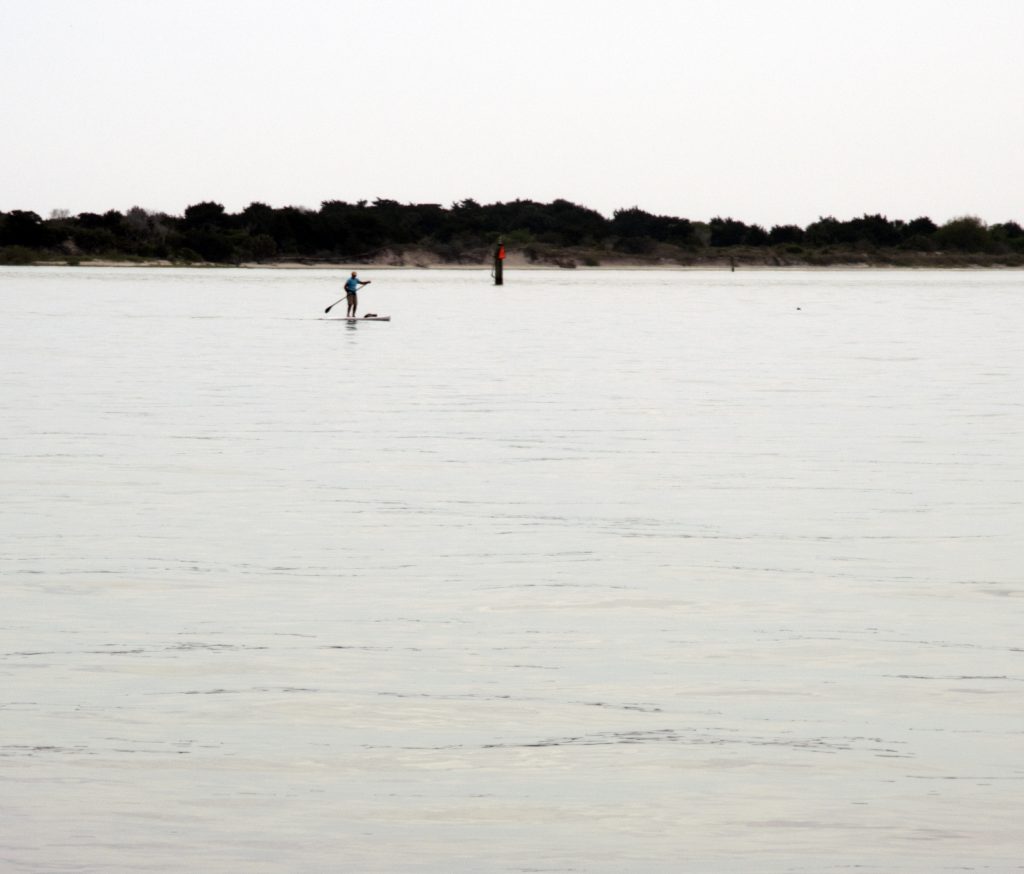 We saw a 280-foot cross (used to be the tallest cross in North America) made of concrete, steel and granite. It was erected in 1966 (400th anniversary of St. Augustine) on the site of a smaller, wooden cross planted by Menéndez when he founded the city. It’s very near the Fountain of Youth. 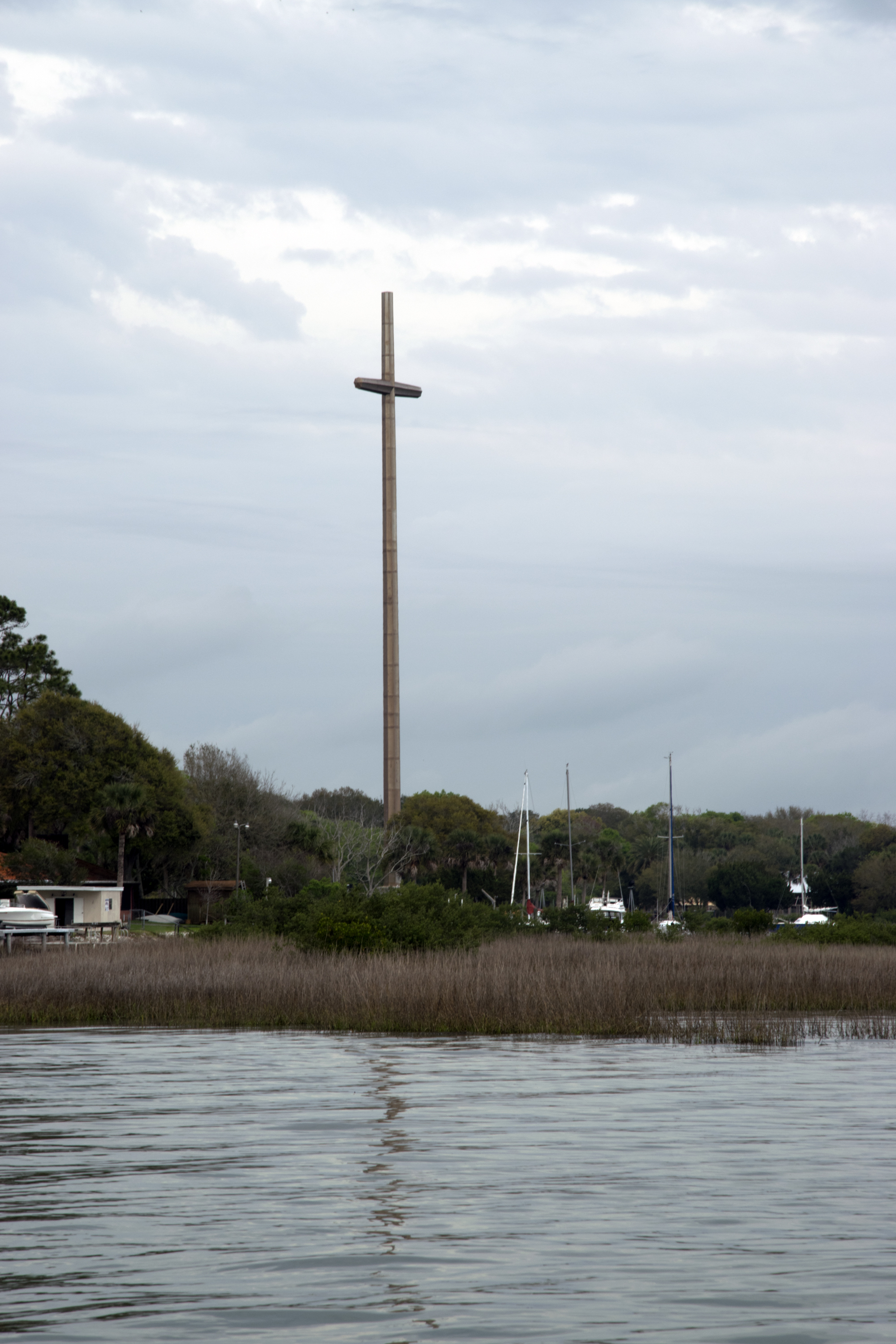 Then, after some dolphin sightings (my pictures of those REALLY sucked), we saw the St. Augustine Lighthouse: 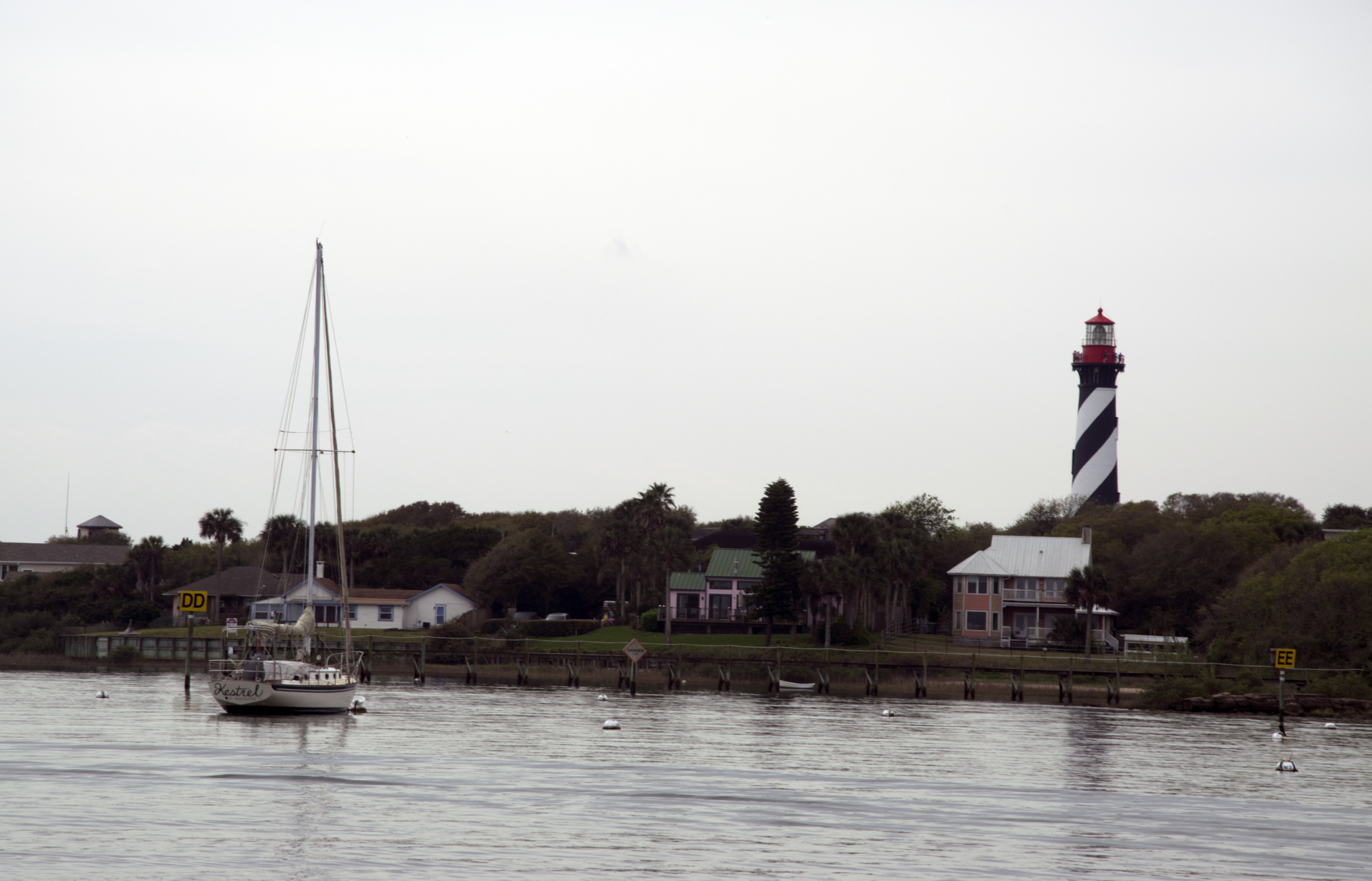 It boasts the first Fresnel lens and is still kept lighted by a non-profit organization that also runs the Maritime Museum located at the same site. It has a varied and interesting history – click the link above to find the details. You can climb the tower if you’re so inclined (no pun intended).

Just as we turned to make our way back to the Municipal Marina, the weather turned as well: 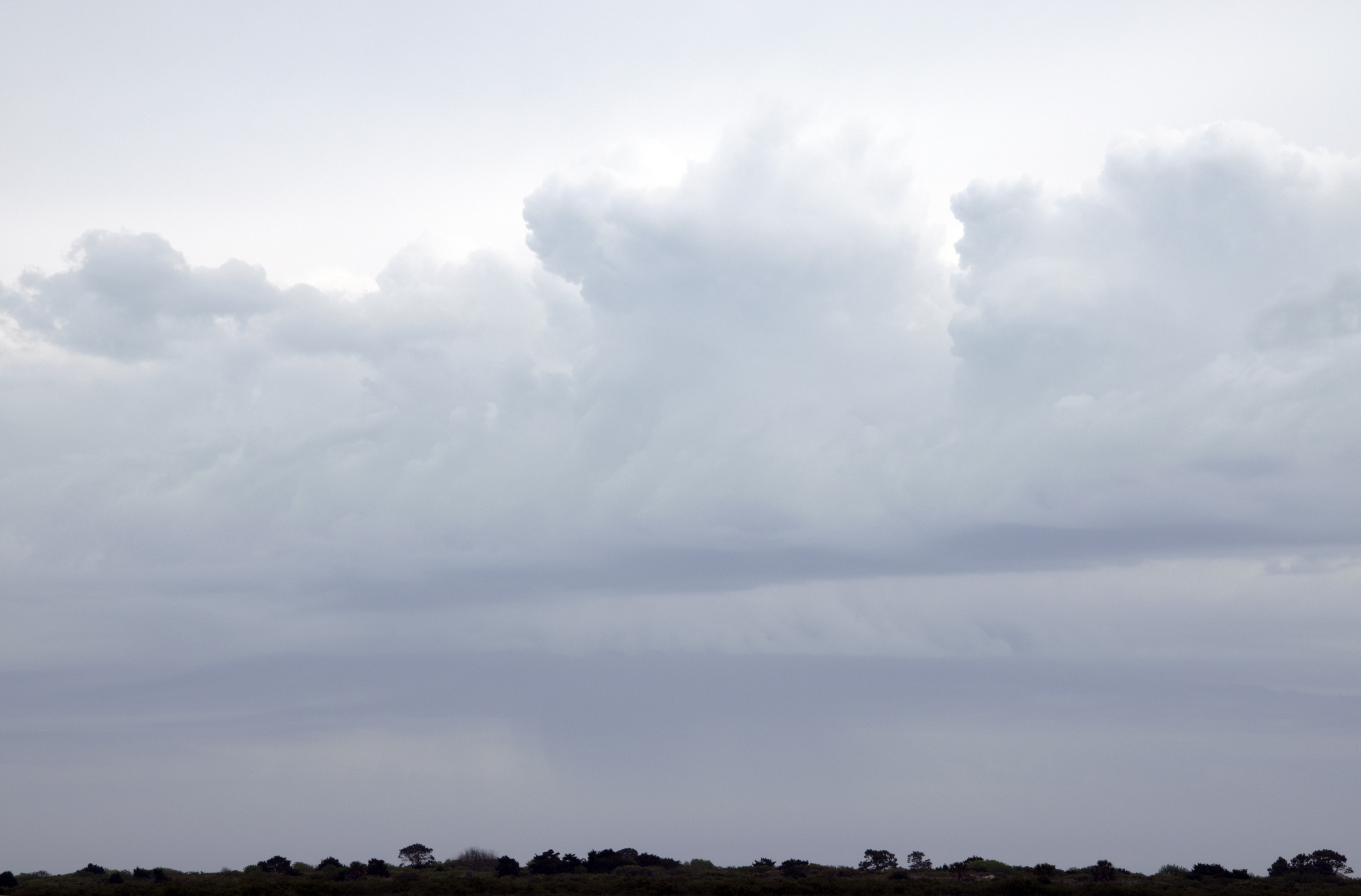 We learned that the Freedom didn’t sail that day, so we’d made the right choice.

I’d recommend a visit to St. Augustine for anyone. It’s an interesting city rich in history with lots to do. The service in the town overall is stellar. And it’s very difficult to find a bad meal there. 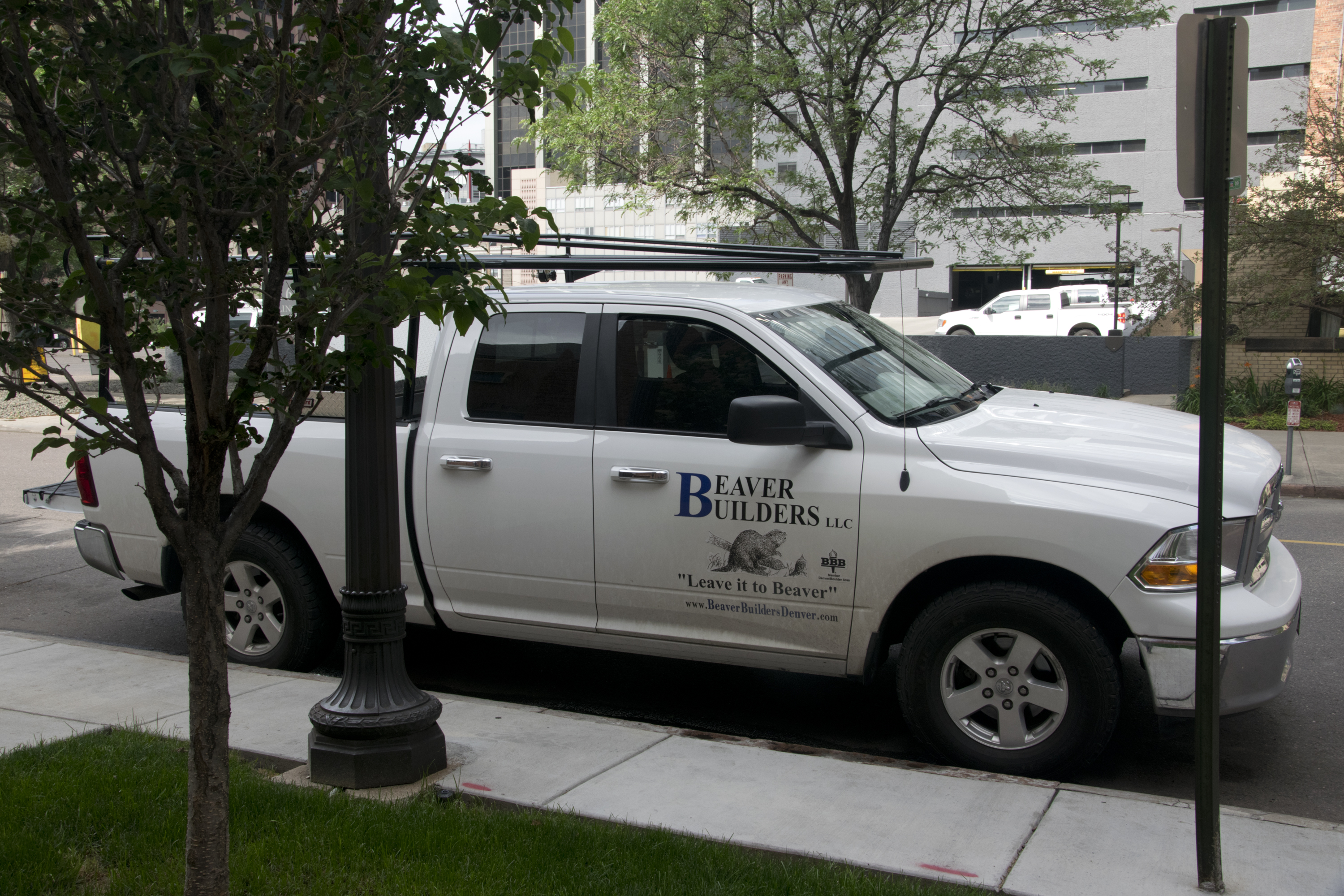