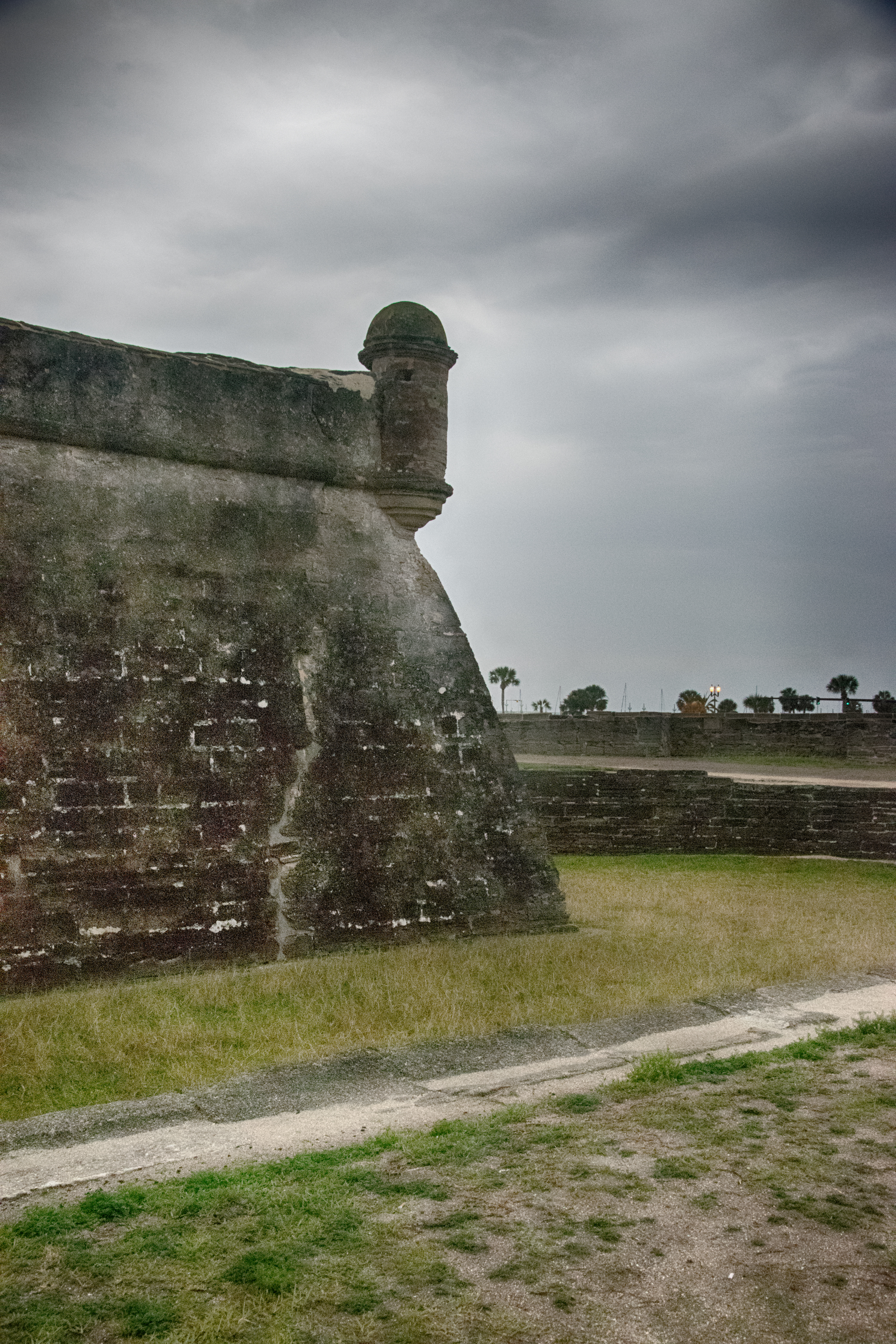 This week I’ll bring you some shots of Castillo de San Marcos, a very old fortress in St. Augustine. Note: Because I was totally NOT in love with the sky and lighting when I took these pictures (see previous post), I have used the HDR process on them to enhance them. Because I can.

Here’s a shot from the city side looking toward the water from behind the fort: 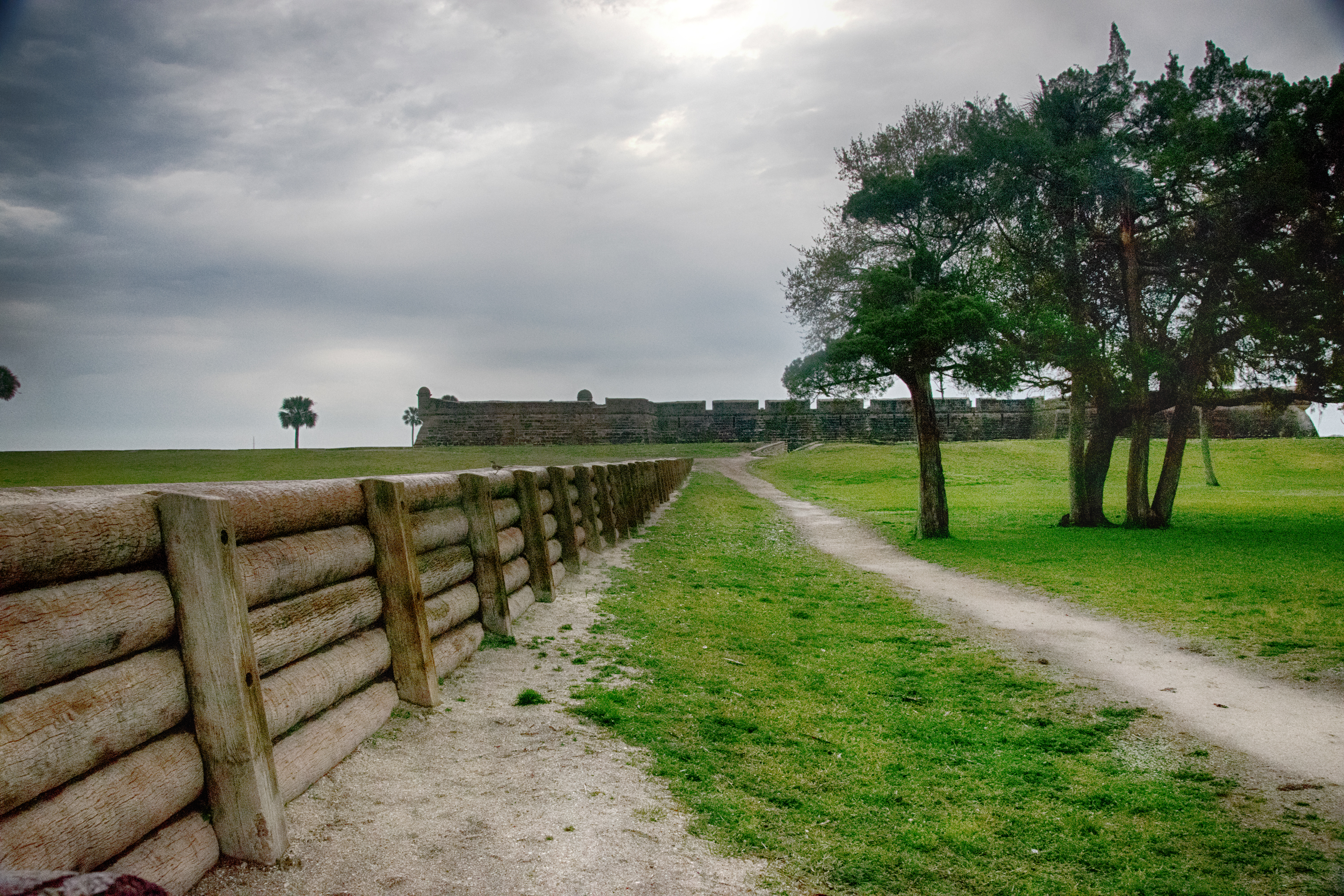 The fortress was built by the Spanish from 1672 to 1695. It’s an outstanding feature of St. Augustine, occupying a promontory near mid-town. It’s withstood several attacks by English pirates and was never taken by force, largely due to the stone it’s made from. The stone is sedimentary rock from nearby Anastasia Island called coquina. It’s a limestone and shell concoction that apparently absorbs cannonball blasts rather than crumbles under them. Hence its longevitiy.

That is not to say it hasn’t changed hands. Here’s a roster of its military duty and occupying nations, who traded the place via treaty:

In 1900 it was “retired” from military duty and made a national monument. Now it’s under the auspices of the National Park Service (since 1993).

AND I recently discovered it’s supposed to be haunted! I confess it’s a rather boring structure so I didn’t go through the whole thing. However, if I’d known about its ghosts, I might have ventured deeper into the center rooms.

Regardless, there are many tourists crawling the place later in the day than when I was there. Plus they have a regular historic weapons demo several times a week and other reenactments periodically.

I was enthralled by this outdoor oven – til I learned it was for heating cannonballs so they could do more damage. Heated balls were carried across the courtyard from this oven… 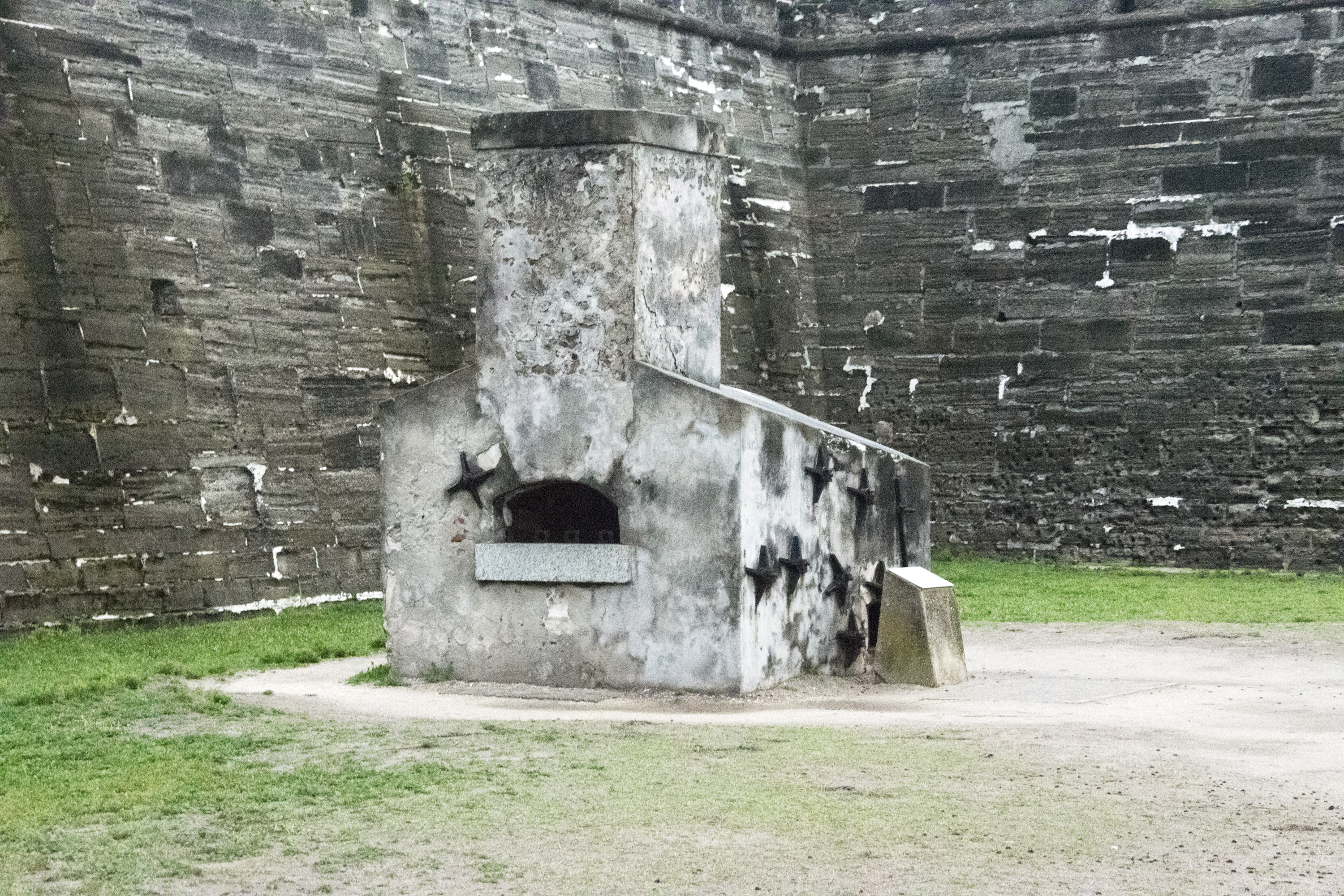 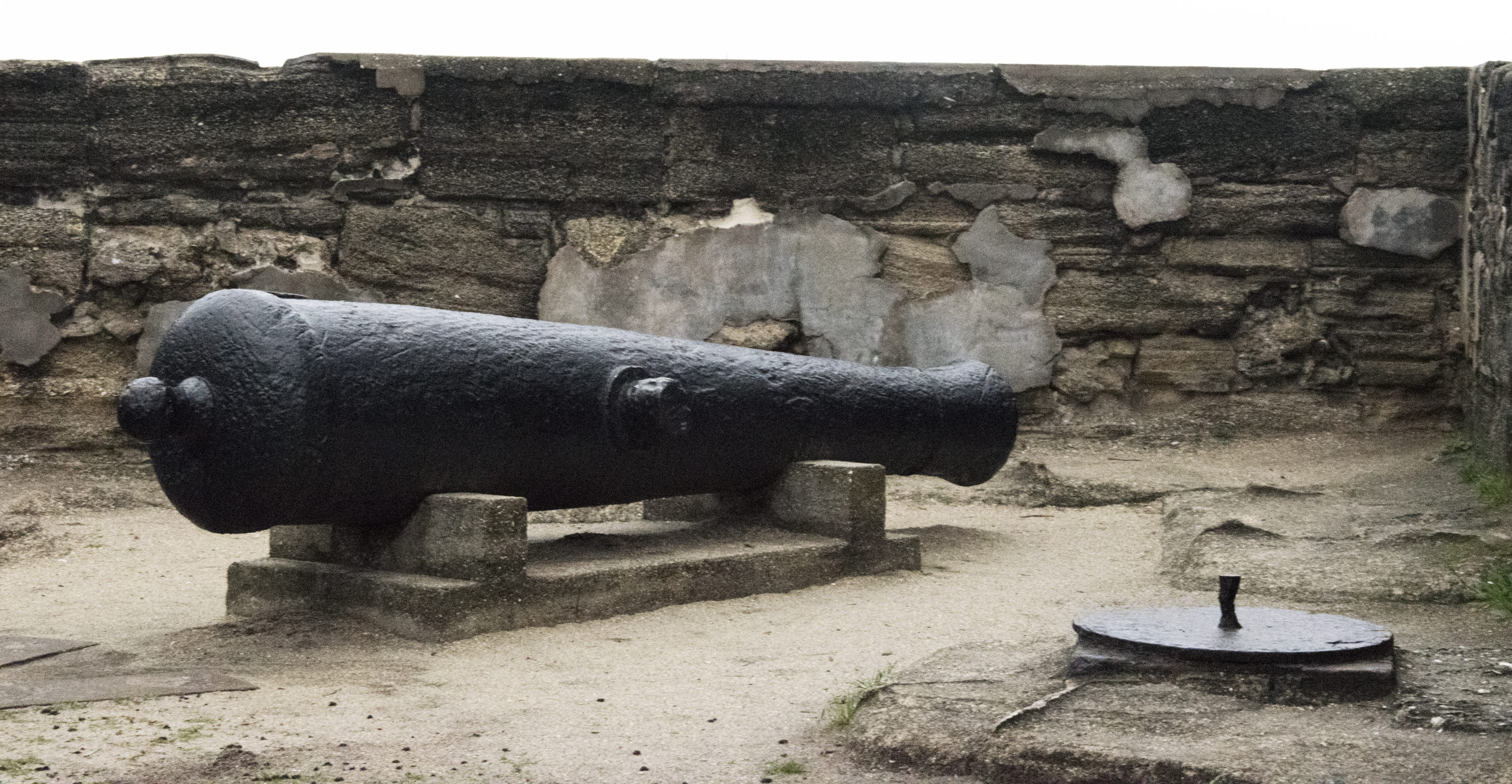 Can’t we all just get along?

Anyway, the best part of this fortress was the view of the Intracoastal Waterway. You can see the Bridge of Lions I mentioned in last week’s post in the distance. 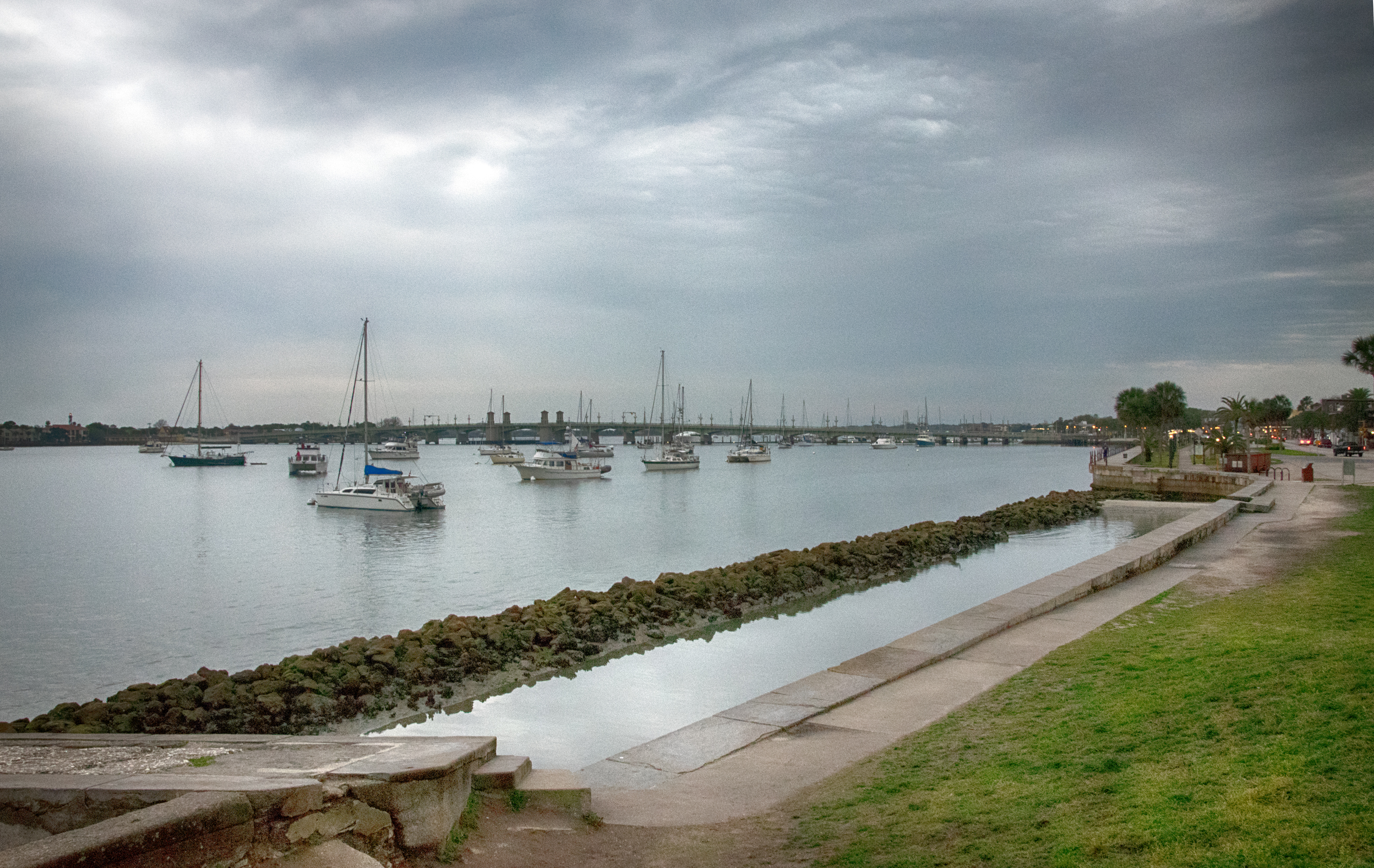 To its credit, the place does have a moat. For this moat, if there was a threat, some worthy soldiers opened a seawall nearby and let in water. 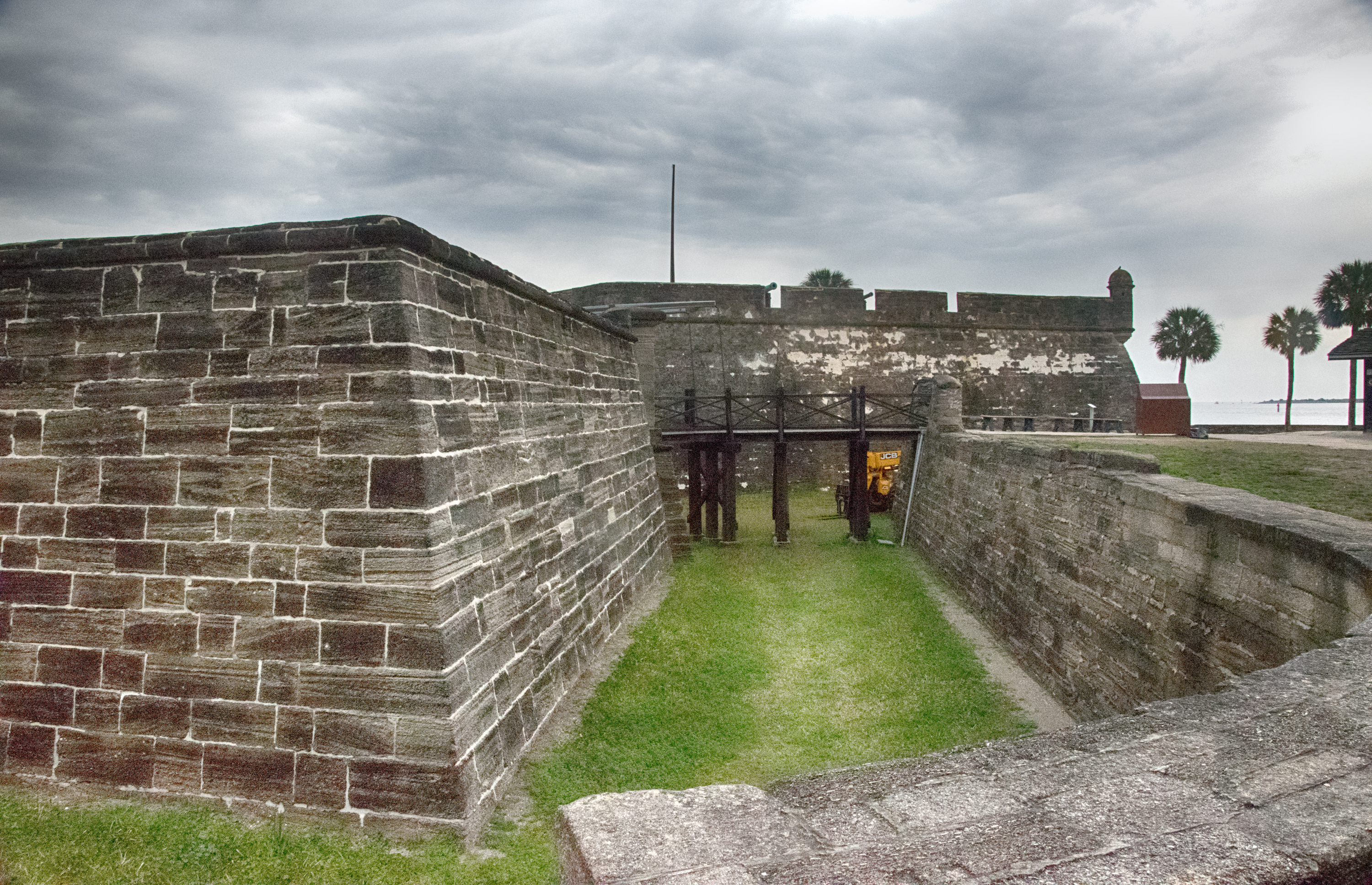 Moats just aren’t the same without water, though. 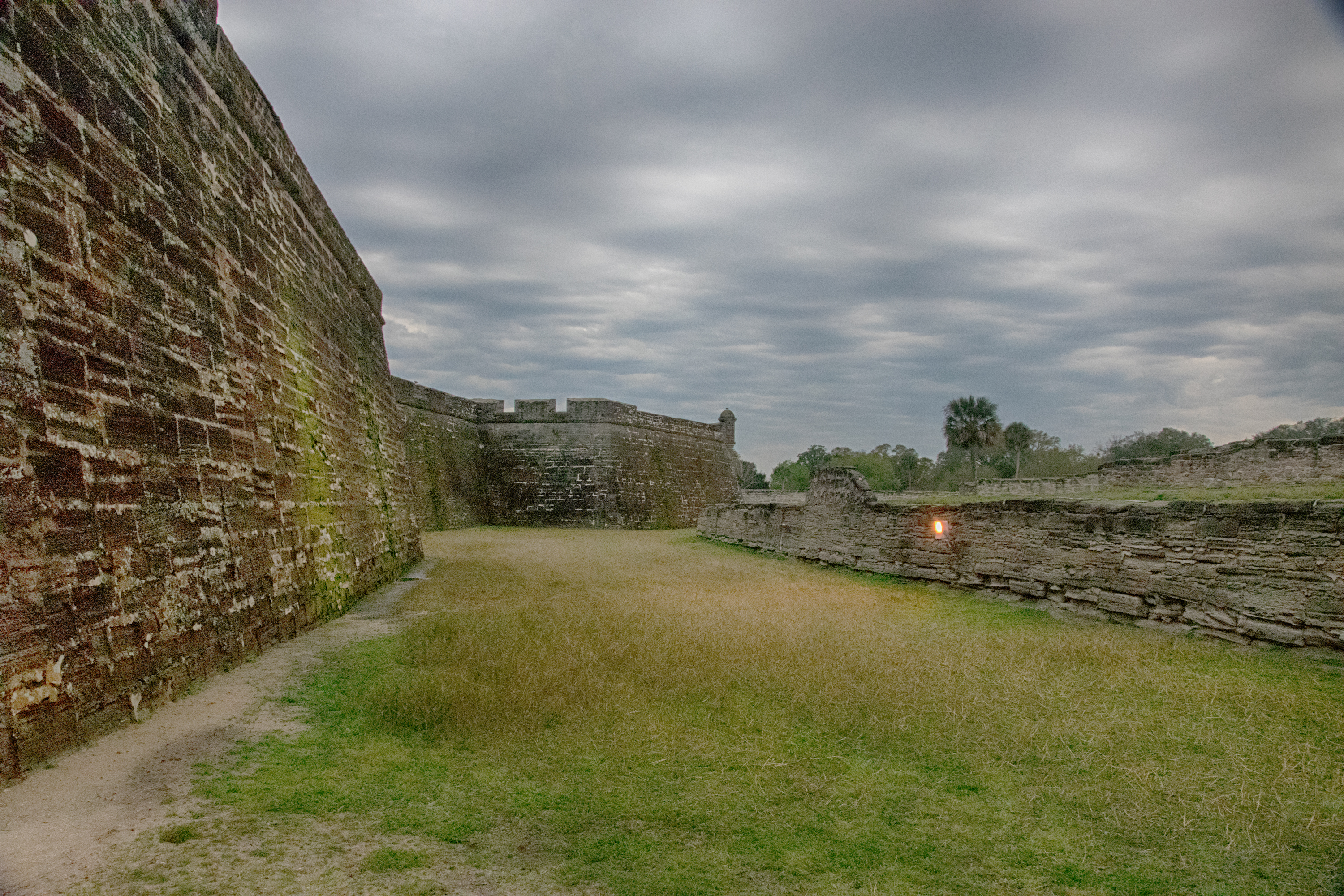 The Castillo de San Marcos is such a huge part of St. Augustine and it’s tourist offerings that you just have to go see it when you visit there. For those more interested in stuff like this than I, it is a great place to experience a richly historical fort up close. It’s open all the time and the demonstrations take place, as I said, several times a week.

Next week I’ll bring you more of St. Augustine’s city proper. For now, enjoy my Brazilian Daiquiri recipe below, because the 2016 Olympics are in Brazil, it’s summer and you should be drinking something like this! And, no, it’s not THAT kind of Brazilian….shees! 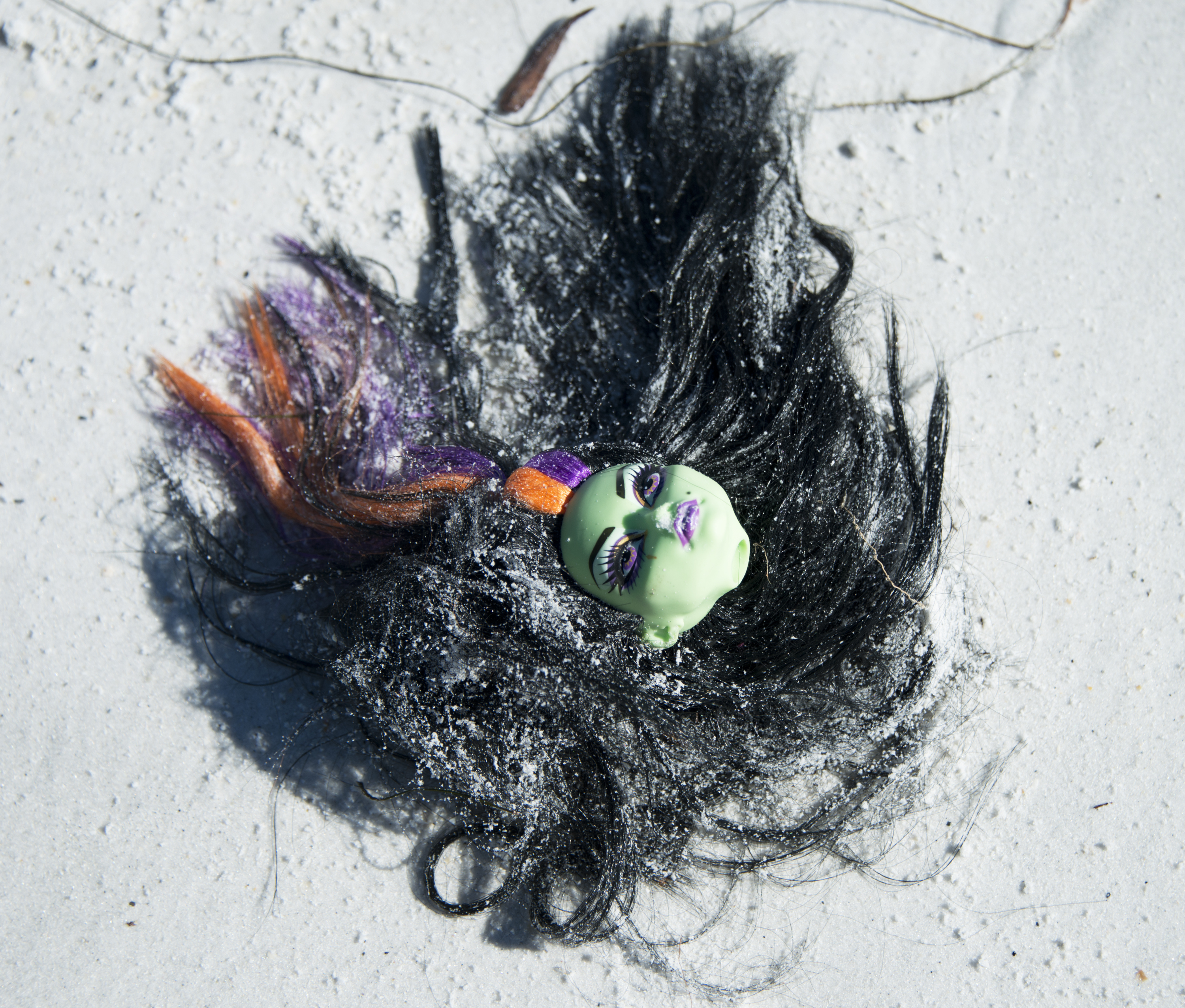