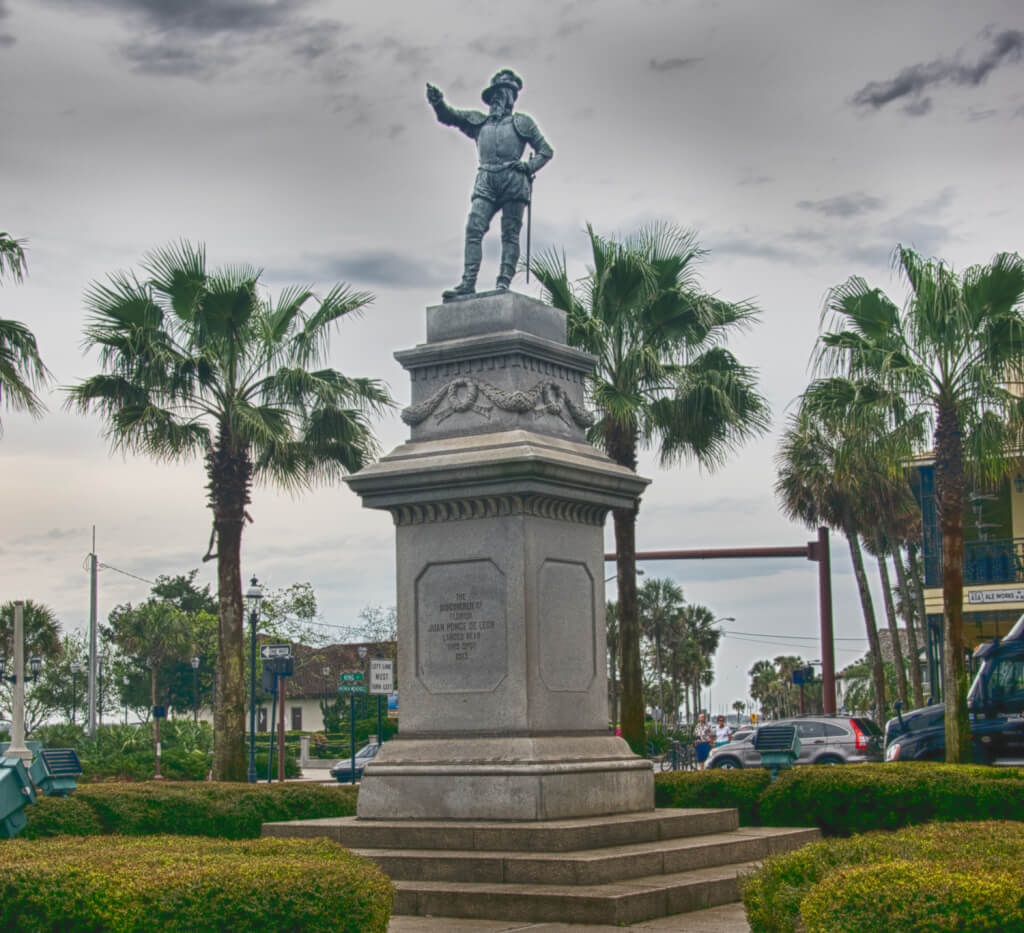 This week I present some photos from my trip to St. Augustine on Easter weekend this year. I’ve already posted info about the boat tour my husband and I took, and about the old Spanish fortress there, Castillo de San Marcos. The photos this week are from strolling through this European-style city and from an open tram tour we made that weekend as well.

The photos are in no particular order, and I’ve included some interesting information where I’ve found it. Enjoy this “walking tour” of North America’s oldest European-established city!

Although St. Augustine was founded in 1565 by Pedro Menéndez de Avilés of Spain, what is now Florida was discovered much earlier (1513) by Ponce de León. He even named it Florida. In addition, he claimed to have discovered the fabled Fountain of Youth in the area. Therefore, you see ol’ Ponce all over St. Augustine.

He’s up on a pedestal in the above photo, standing in Ponce de Leon Circle next to the harbor on one side and the old open-air marketplace on the other. Everyone delights in pointing out that this statue is life sized – Ponce was just 4’11” tall!

Here he is again – or at least one of his conquistadorian brethren – in front of the Fountain of Youth Archaeological Park just north of the city. 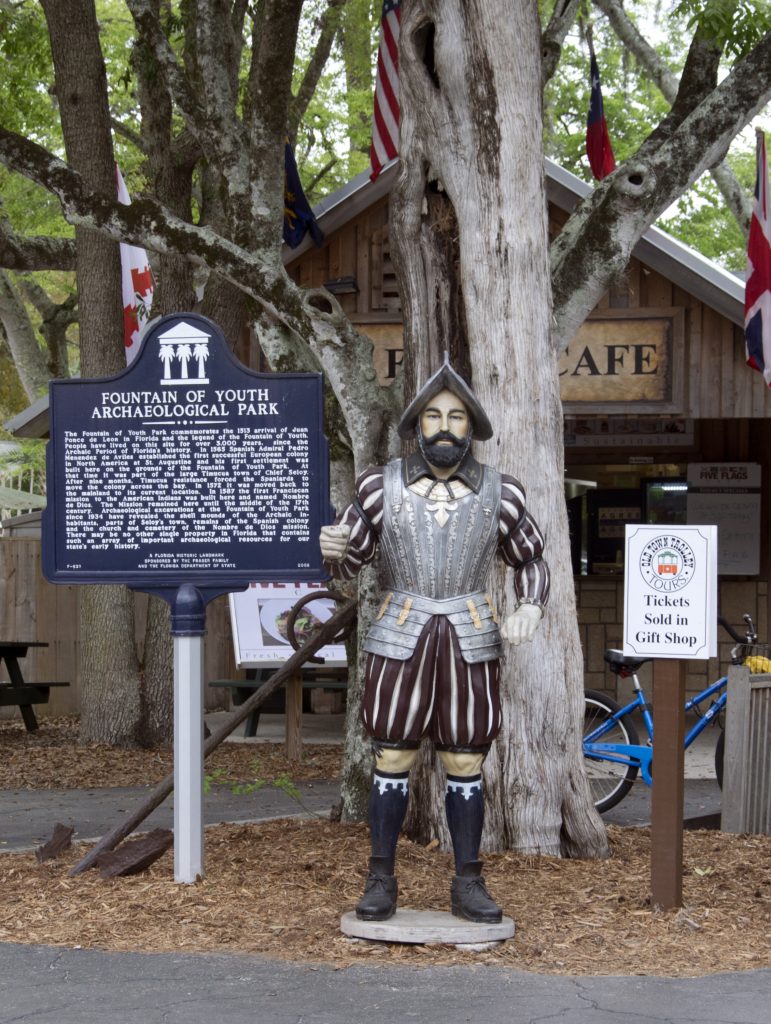 There’s also a prominent statue of Menéndez in front of the City Hall, which also houses the Lightner Museum. The building was originally the Alcazar Hotel, built in the 1800s by Henry Flagler. 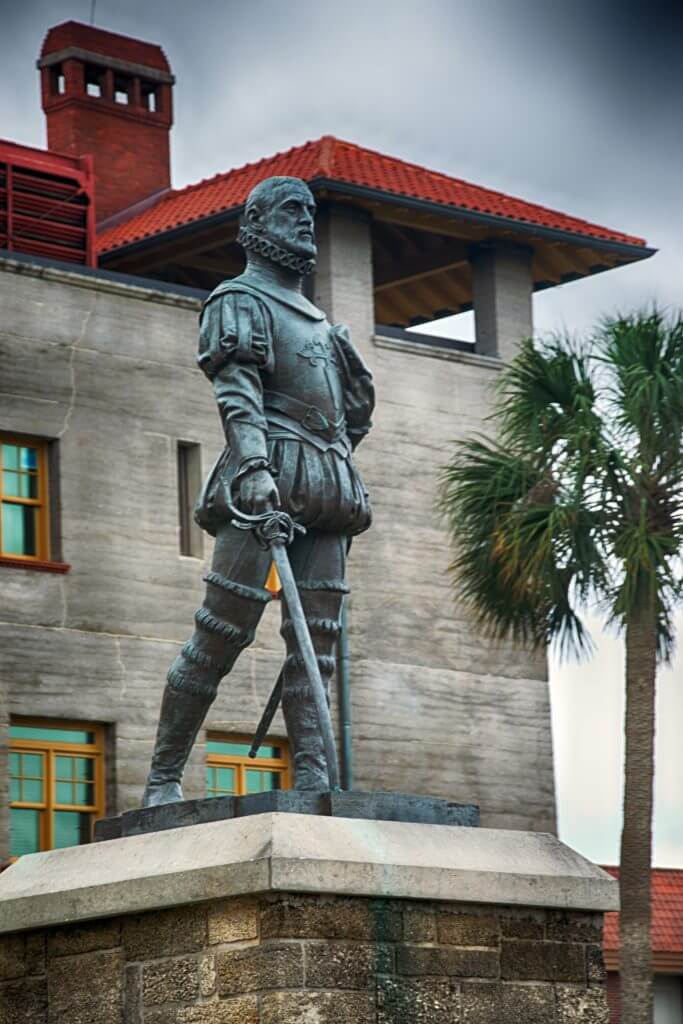 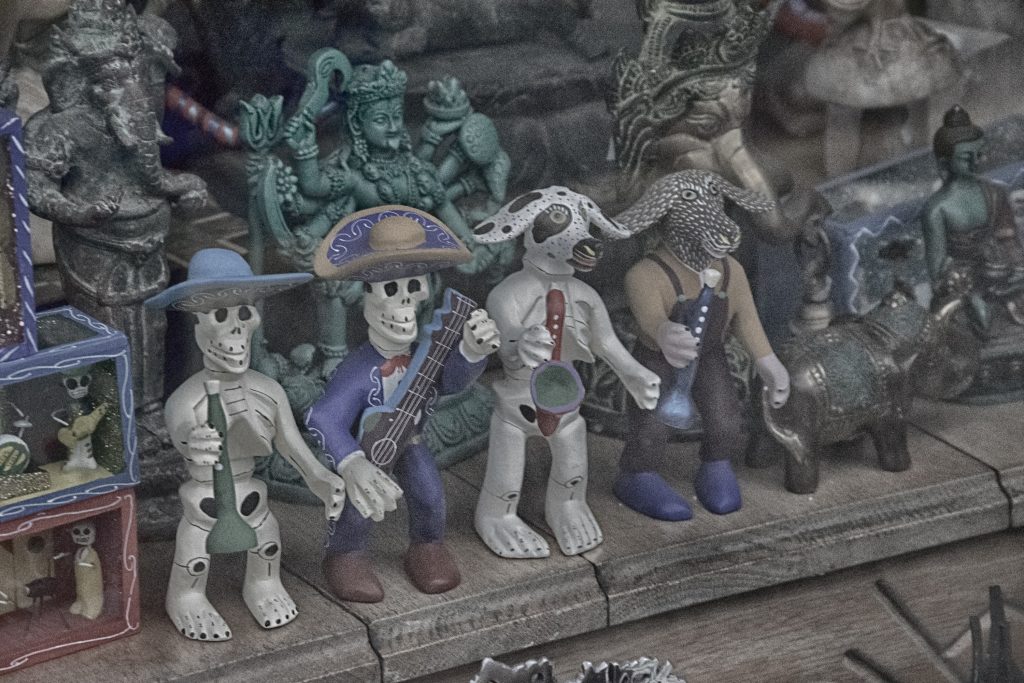 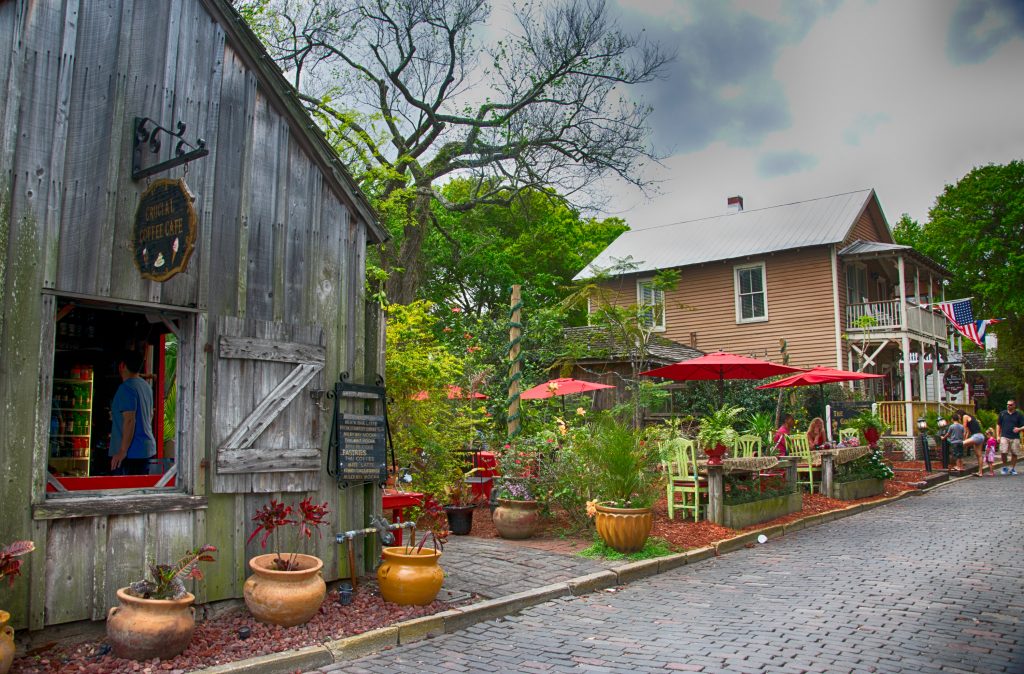 The Cathedral Basilicia, home of the first Catholic diocese in North America, established 1565. It’s a stone’s throw from the life-sized statue of Ponce. 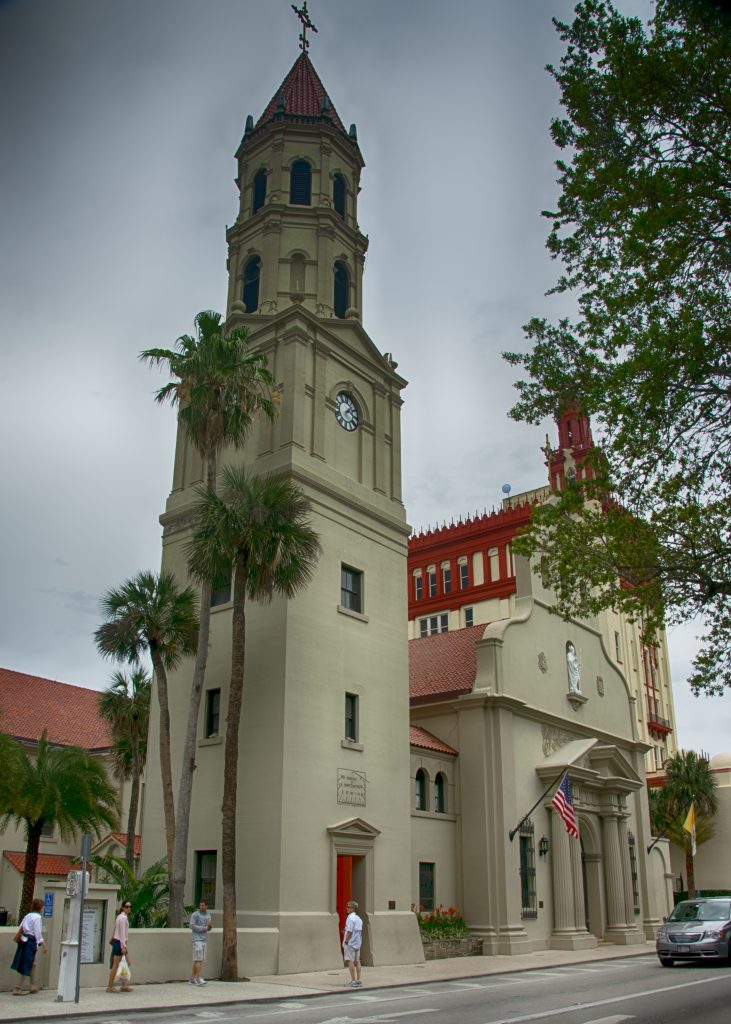 I like to get up early on Sundays and walk around where I’m visiting. I always get peaceful shots with no tourists in the way – here’s a lovely fountain: 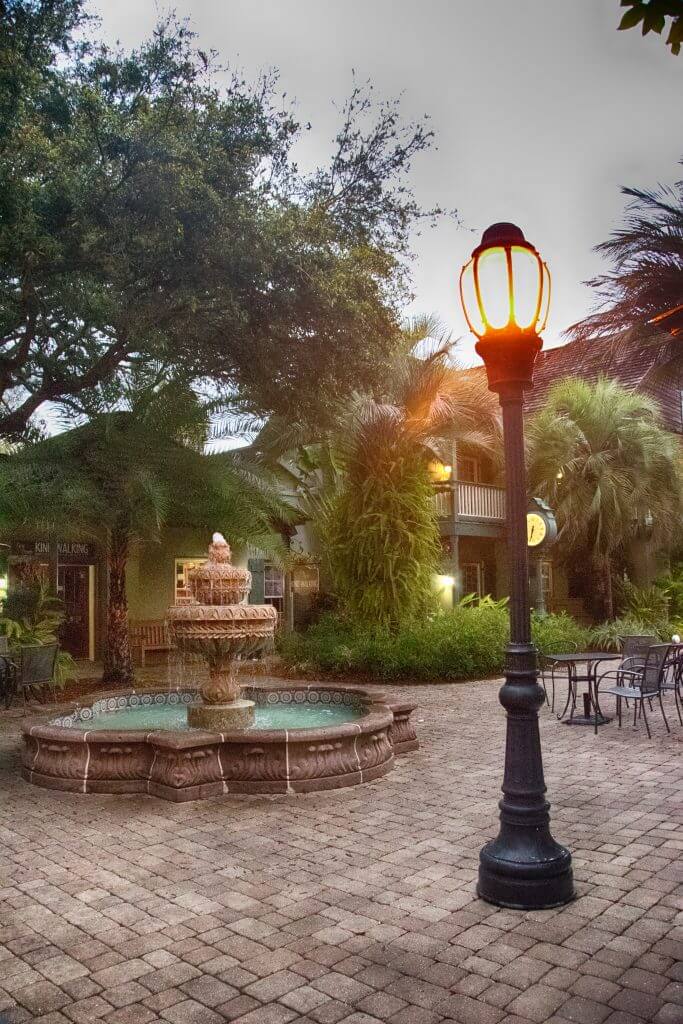 George Street is the main drag for tourist shops, bars and restaurants. Here it is while the tourists are all still abed: 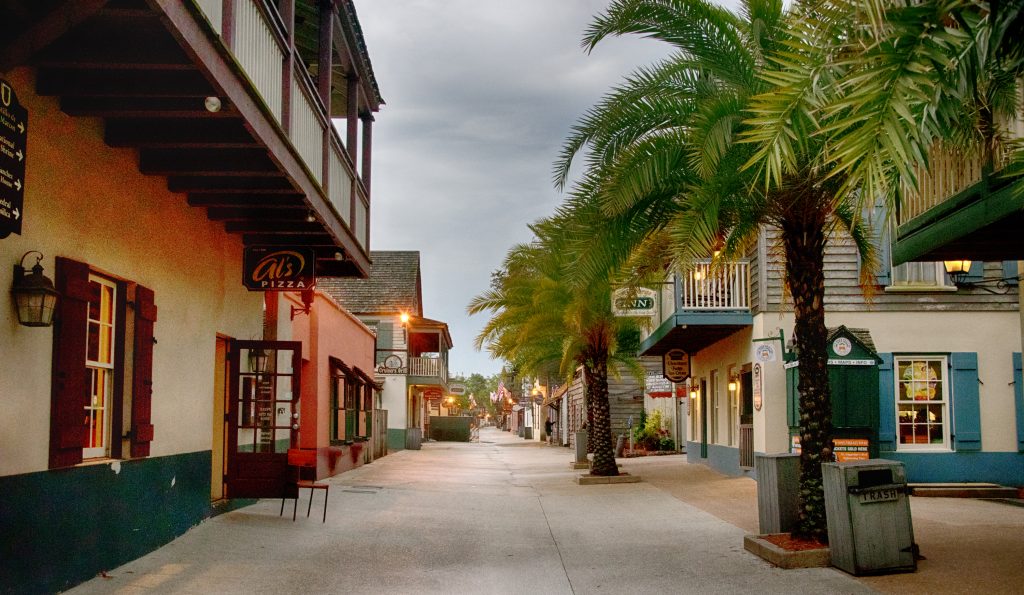 Can I park here? 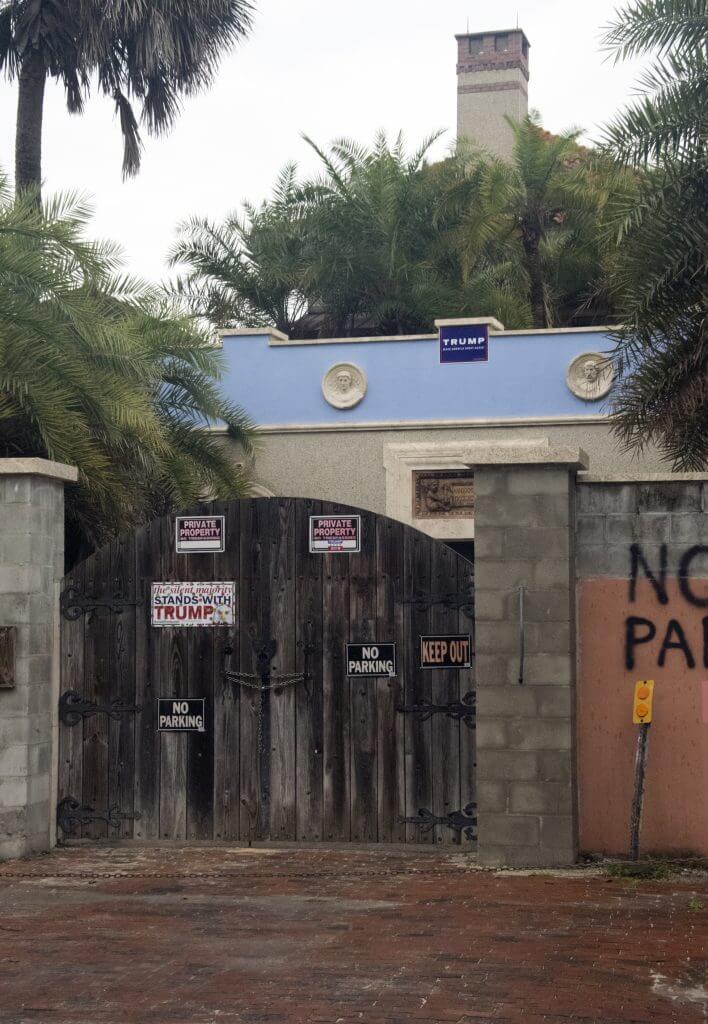 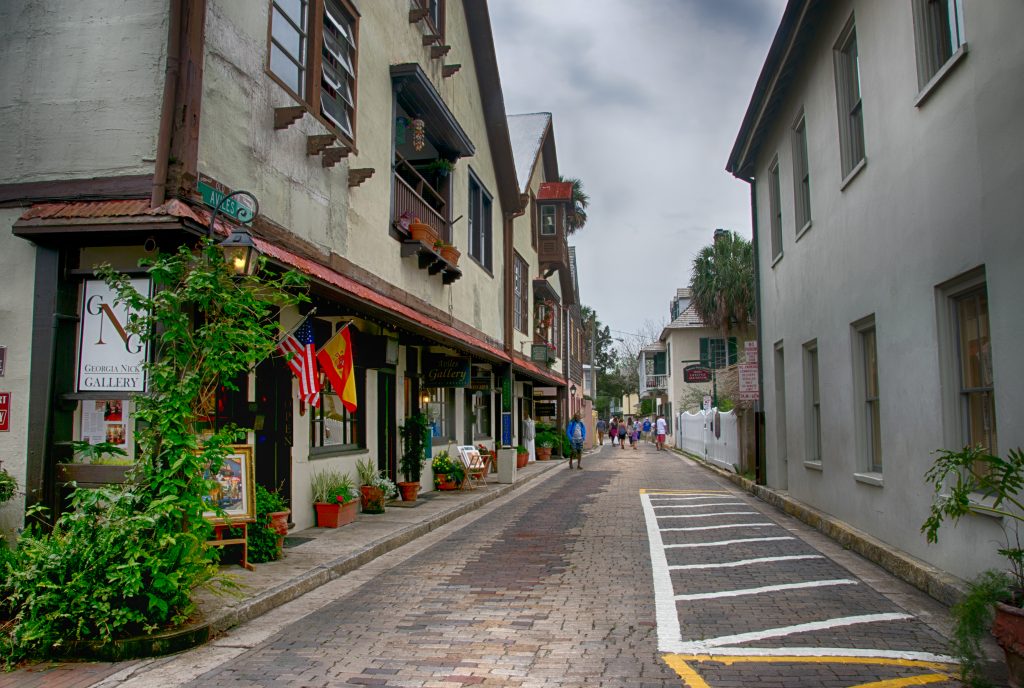 I loved seeing this street because I’d made a black-and-white photo of a painter on this street many years ago and handcolored it. I didn’t even remember what street the guy was on, but I recognized it immediately. Here’s my handcolored shot; he was standing just out the frame of the above photo on the left: 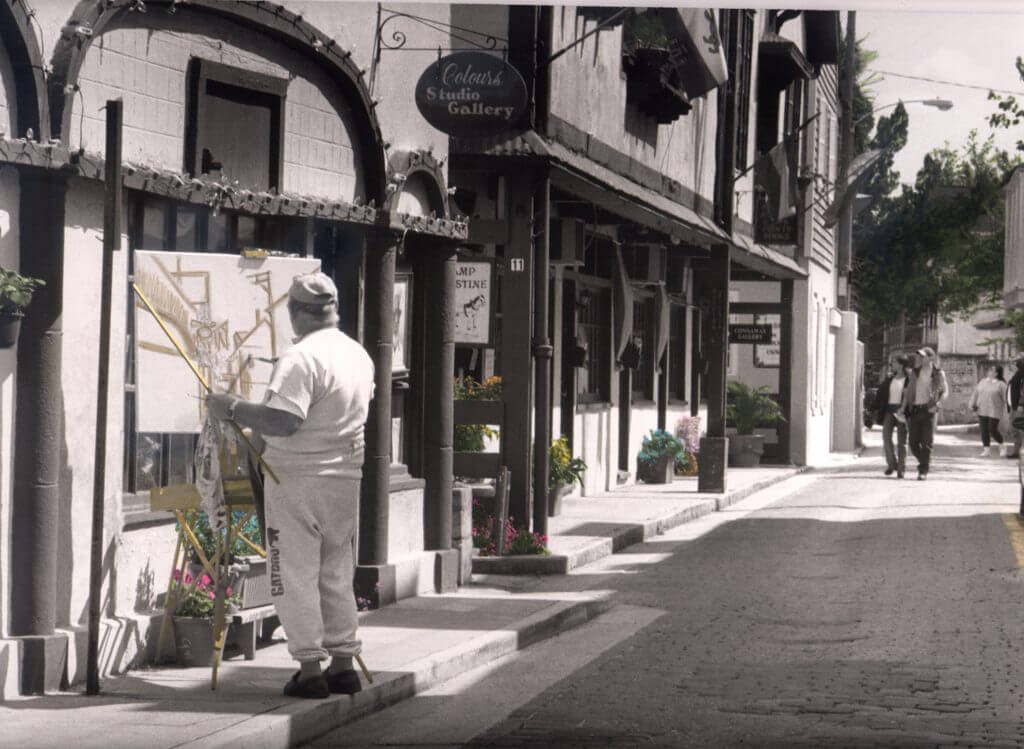 As I recall, he was quite drunk, sipping a clear liquor (I hope) out of his turpentine jar and complaining about his wife’s having bought a new mini van that morning without his knowledge or consent. “$24,000!”

Something I didn’t know about St. Augustine is that it was an important location in the Civil Rights Movement of the 1960s. Here’s a house at 81 Bridge Street where Dr. Martin Luther King, Jr., stayed just before leading a protest at the Monson Motor Lodge in 1964. The motel had a segregation policy and a segretated restaurant an pool area. The protesters were arrested for trespassing. The motel has since been torn down and a Hilton built in its place. 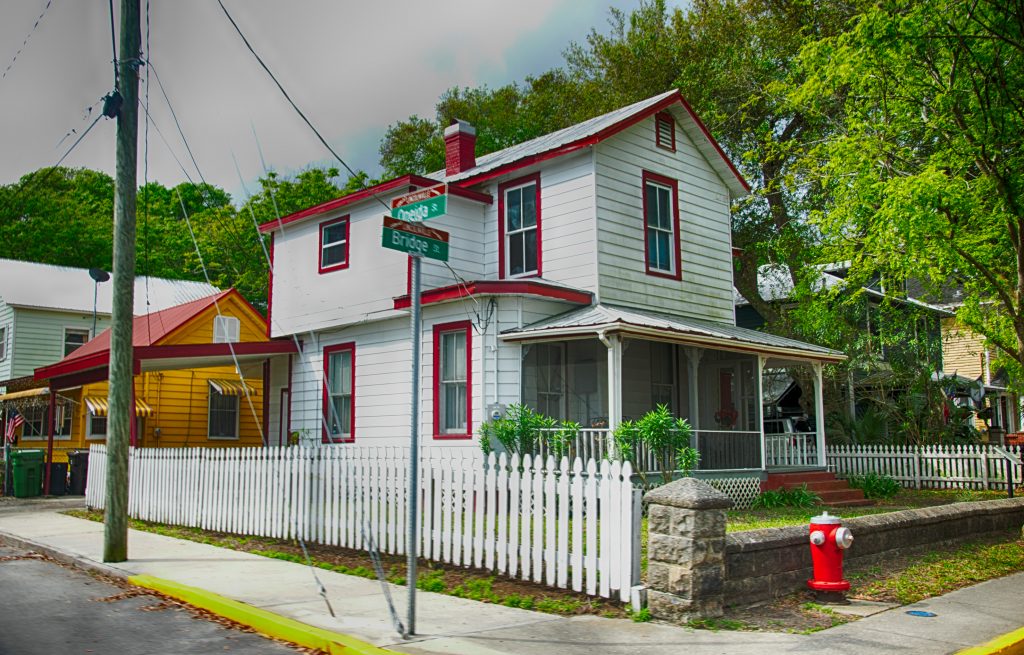 In fact, the city has a Freedom Trail of locations relevant to the Civil Rights movement there.

The Love Tree: a palm tree engulfed and growing up through an oak tree. It is said that lovers who kiss under the love trees will seal their love forever. There are supposedly seven such love trees around the city. We only saw this one, at the aptly named Love Tree Cafe, down the block from our BnB. 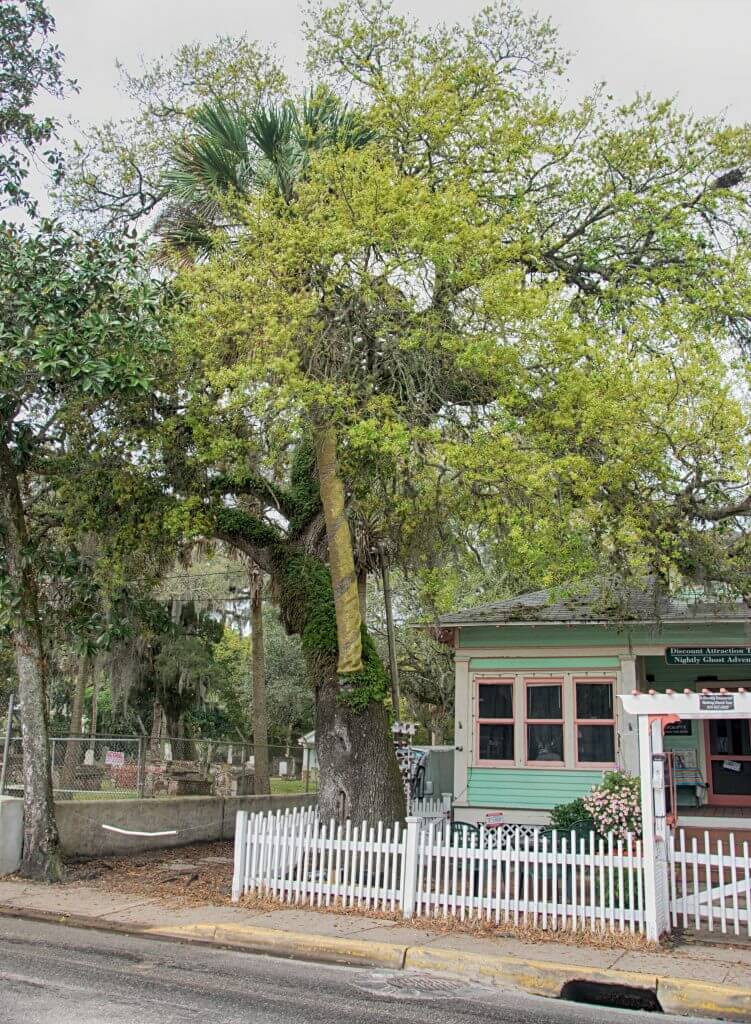 The very first permanent Ripley’s Believe it Or Not! “Odditorium” is in St. Auggie. We only saw this wax guy while buying tram tickets. Not sure I’d survive a walk through that place! 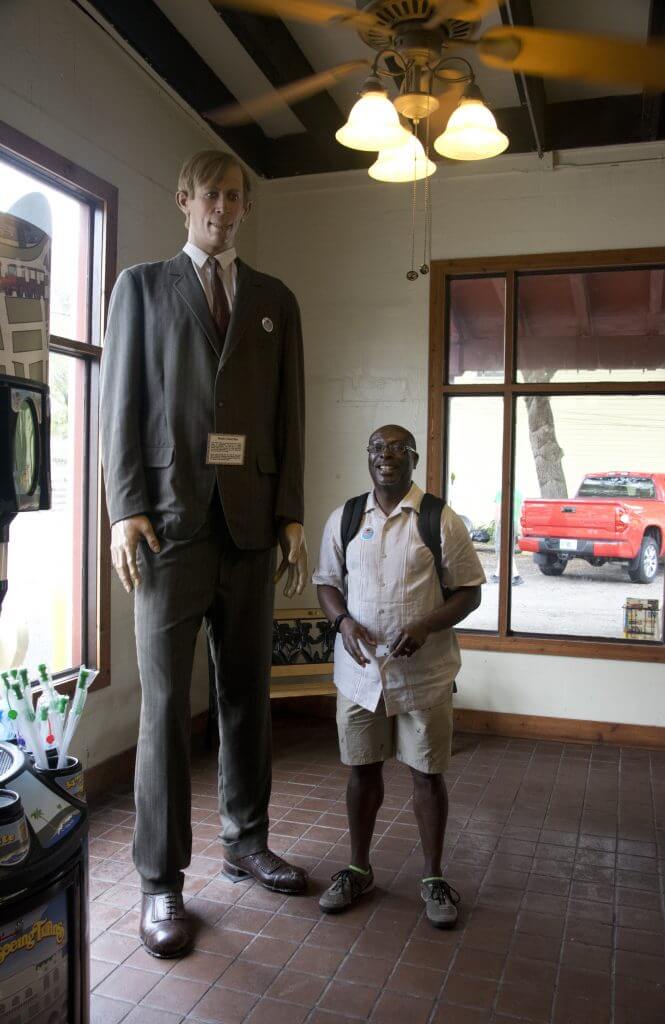 Another tree character: The Senator, who lives in the circle-drive of a motel: 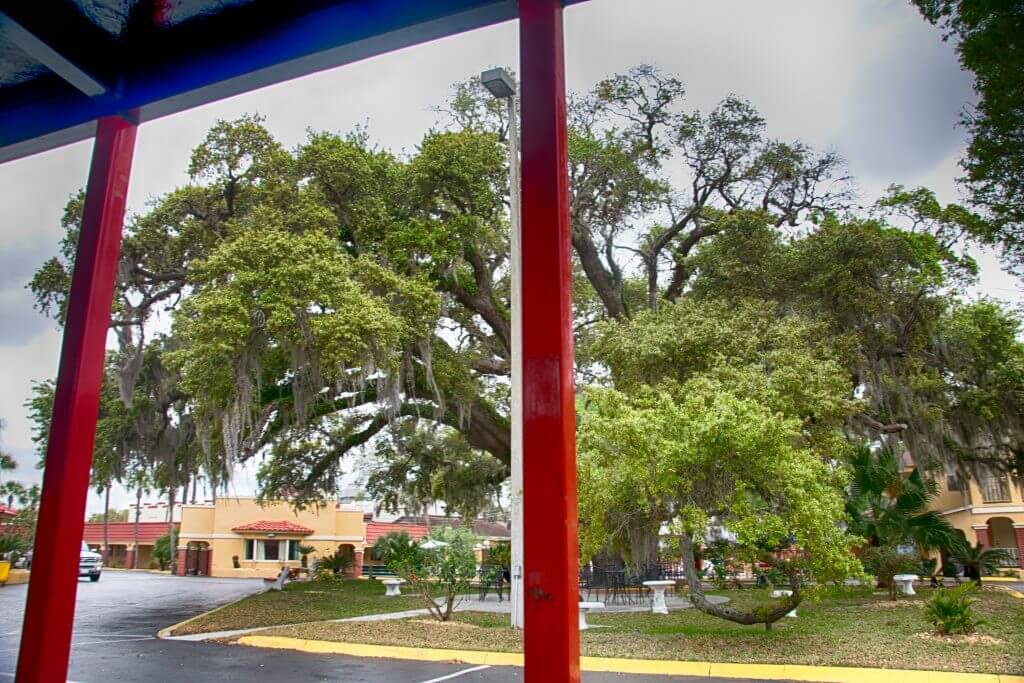 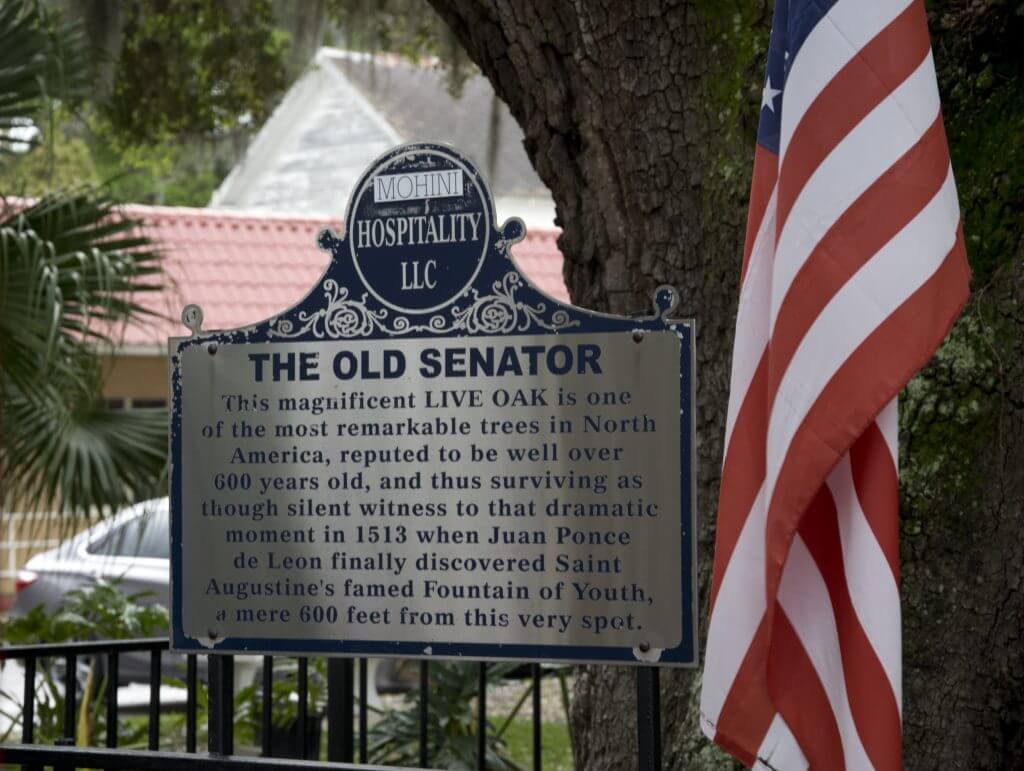 St. Augustine’s Distillery still produces alcoholic beverages, and it also gives tours and has a restaurant. My favorite part of the place was the old, industrial bathrooms next to the gift shop, which was in part of the old warehouse. Yeah, people were waiting on me to take this shot! 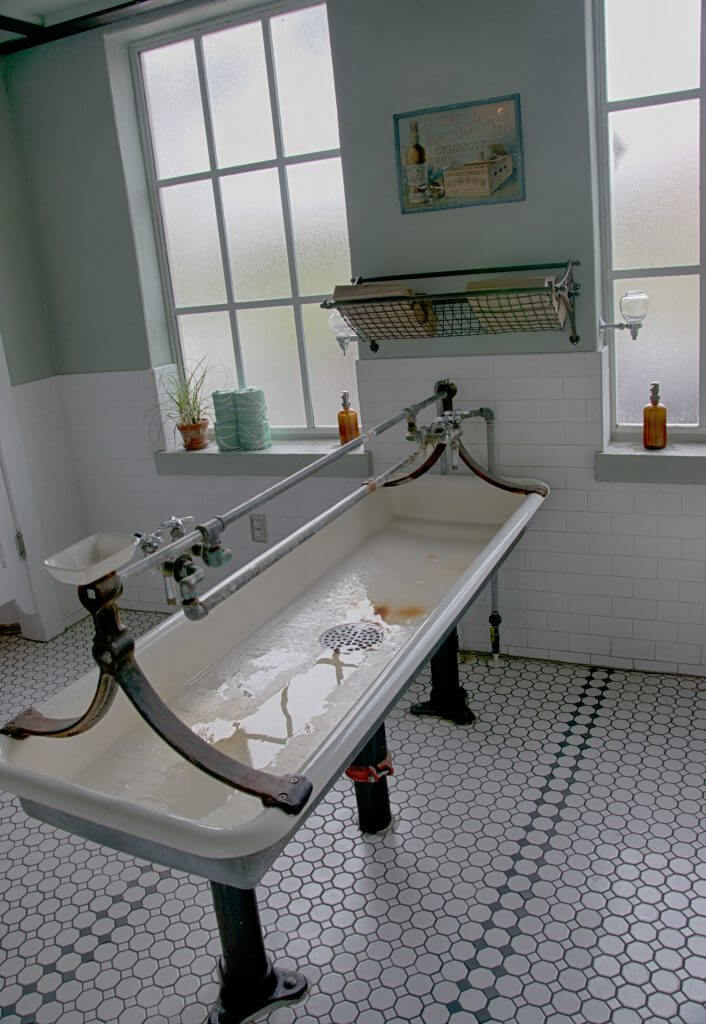 Check out the primary colors on the Villa Zorayda building: 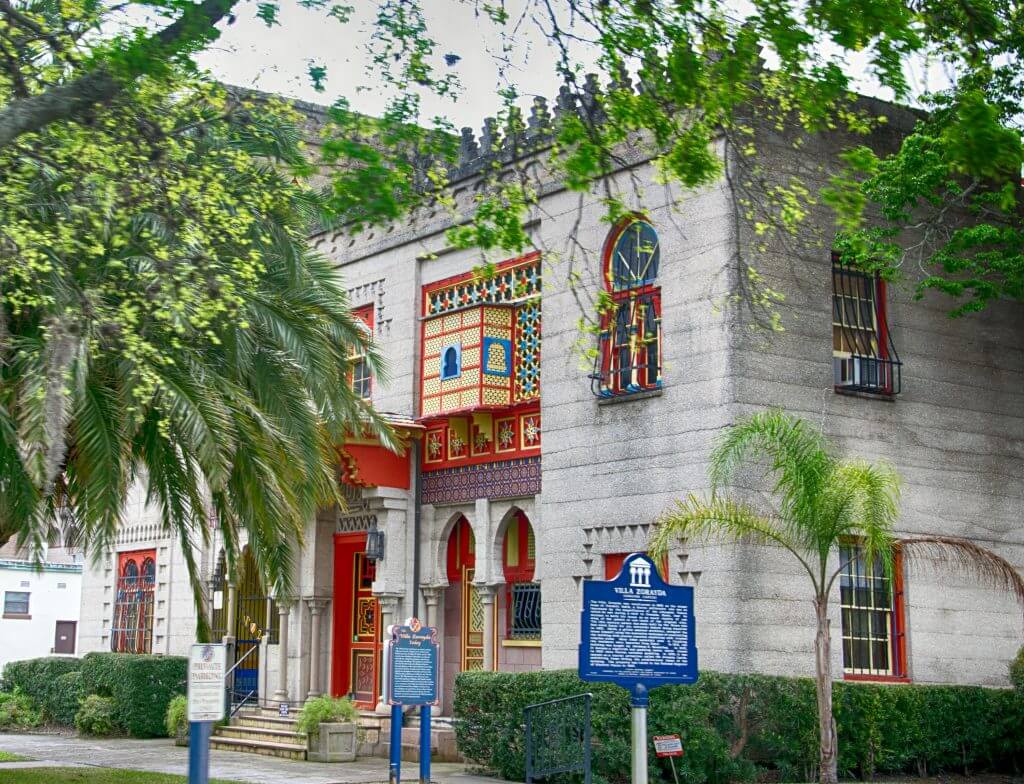 It’s now a museum but was originally built in 1883 as a winter residence for Franklin Smith, a real Rennaisance man who, among many other things, founded the YMCA. The building is a 1/10th-scale copy of part of the Alhambra Palace in Granada, Spain. I didn’t get to go inside, but I will definitely do so next time I’m in town. It houses lots of unique antiquities, so I’m led to believe!

There you have it! A more-or-less random walking/riding tour of St. Augustine! 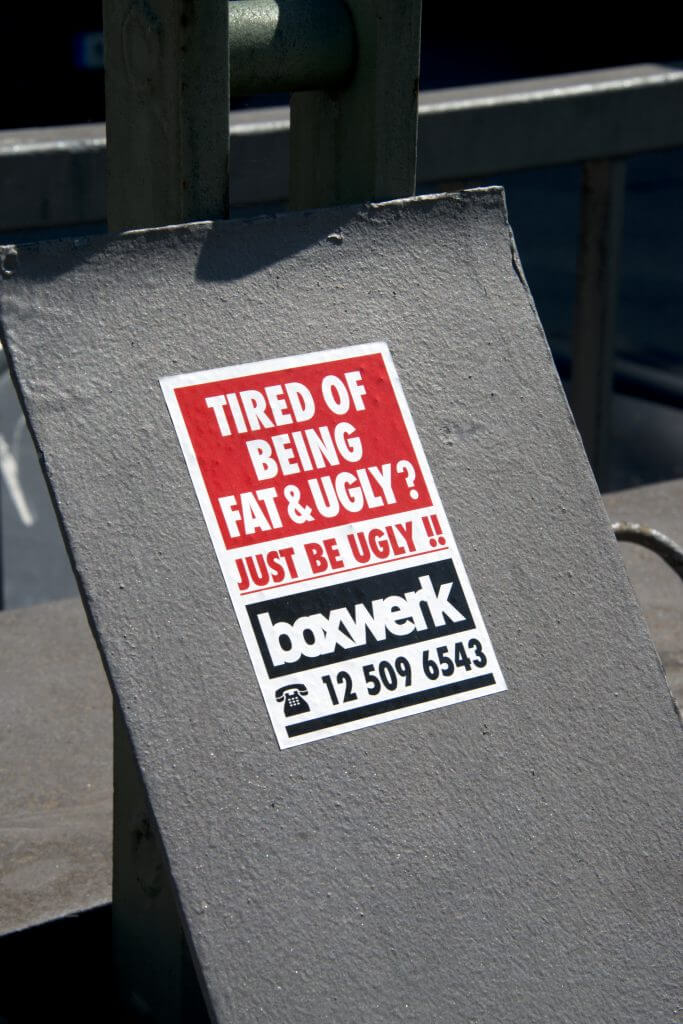