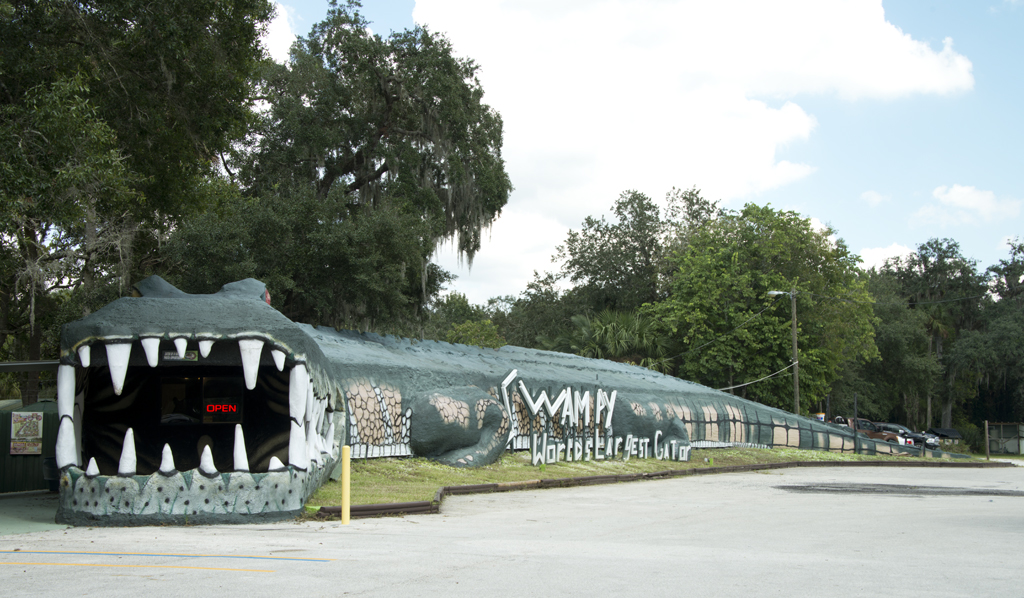 Happy Thanksgiving to my American friends and family! I am very thankful for you and for all my readers. Not everyone gets to share their passions with the world!

Special note: As I’m sure you’re aware, the holiday season is upon us. If you don’t want to leave your home to buy presents for those you care about (or the office worker Secret Santa you don’t care about!), click the Shop tab above for all the ATFT gear in my Zazzle storefront. And THIS WEEK ONLY: Use the promo code BLACKFRILOVE on Zazzle to purchase ATFT gear and SAVE 40% on aprons, luggage tags, mugs and tote bags! You can get other discounts on other items as well using the same code.

Also on the Shop tab, find links to my books on Amazon (cookbooks, photo books, even an English workbook for my podcast).

Subscribers to the blog get regular discounts, so sign up if you haven’t already on the form at right or above.

This week I present another in my series of Things To Do Near Tampa Bay. Florida residents know that visitors come to enjoy the weather and visit Disney. I’m showing you things you can do with your visitors (or where to point them to get them out of the house for a few hours). This week I give you Jungle Adventures located in the charmingly-named town of Christmas. Actually, it’s not in the town; it looks like it’s in the middle of nowhere on State Road 50 near Titusville. Admittedly it’s a little farther afield than most places in this series, but it’s definitely worth a look-see, especially if you’re heading for NASA or the beaches on the East Coast. 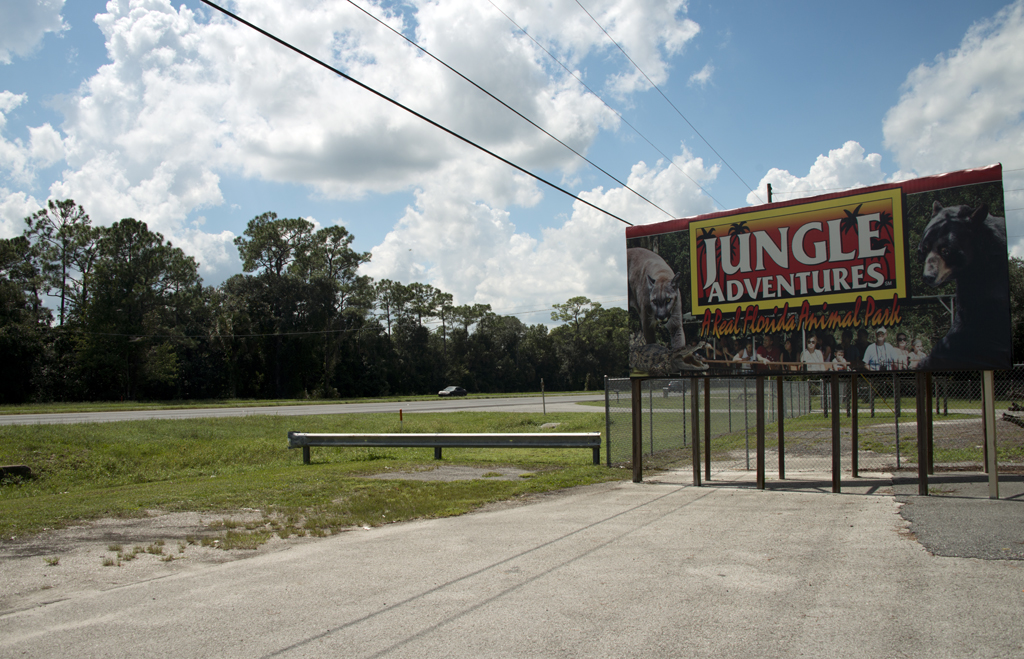 I saw this place back in 2007 as I chauffeured my Czech friends around the state. I never got this building out of my mind. The entire reason I went there this year was to photograph it:

It’s a giant concrete alligator lying parallel to the highway and proclaims itself to be “Swampy, World’s Largest Gator”. It’s just over 200 feet long. I love the “open” sign in his open mouth! 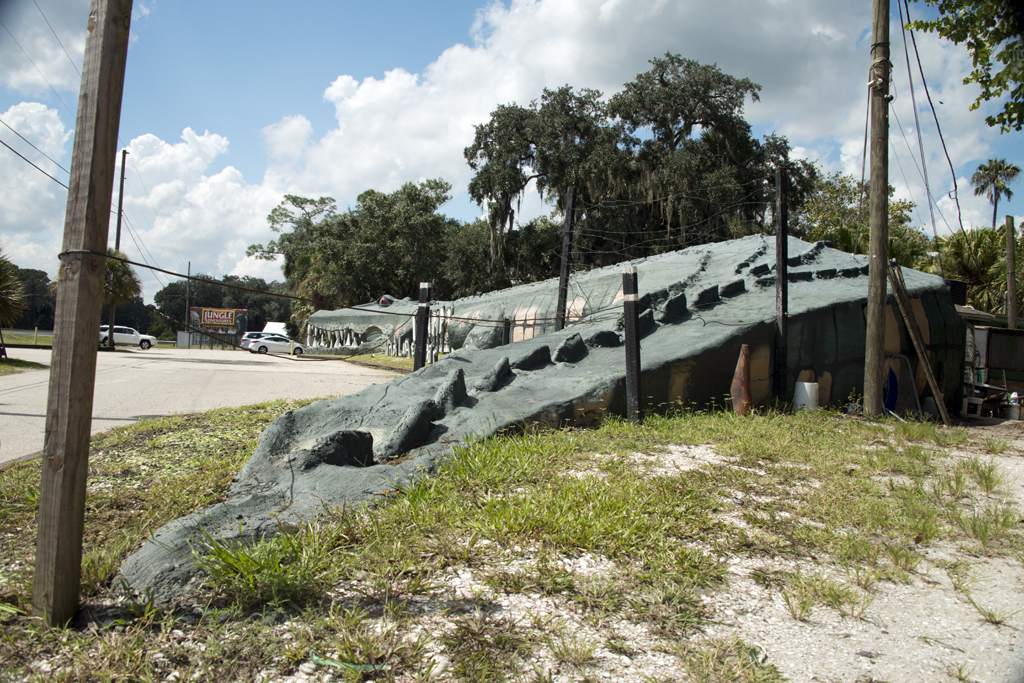 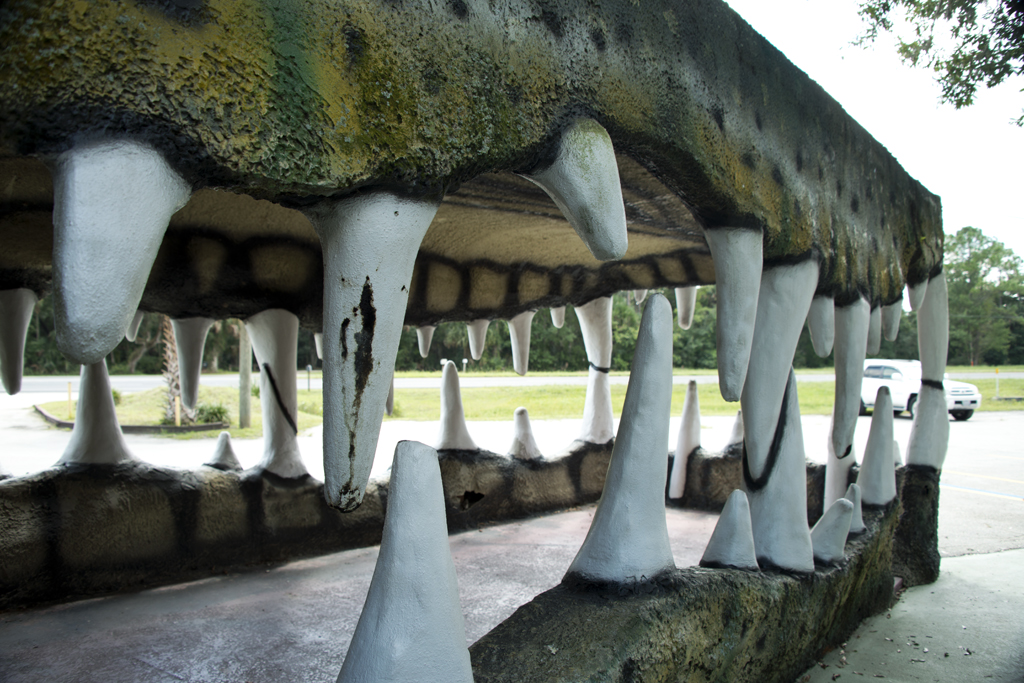 Jungle Adventures bills itself as “A Real Florida Animal Park” and that’s exactly what you get. Entering through the gator on the opposite side from the road, you will notice that the place is kind of shabby. Also, you’ll notice a bad smell, probably from the animal feed. Inside is the gift shop where you can buy your ticket and a small snackbar beyond.

A one-day adult ticket is listed at $23.95 plus tax. However, I bought mine online from their website and got about a 15% discount. They have senior, kids and annual passes, too.

The next thing I noticed was the friendliness of the staff and their obvious enthusiasm for the place and the animals. I checked in with the giftshop lady, got my wristband and headed out another back door into the park. There was a picnic area where they hold demonstrations a couple of times a day in which you can hold a baby gator, a snake and/or a tarantula. I kind of disagree with doing that (plus I’m a big chicken), so I skipped it. But they take your photo with the animals which you can buy later in the gift shop.

I purchased a bag of animal food you can feed turtles, birds and baby alligators with. Then I headed across the bridge to the excitingly-named Wild Animal Island! 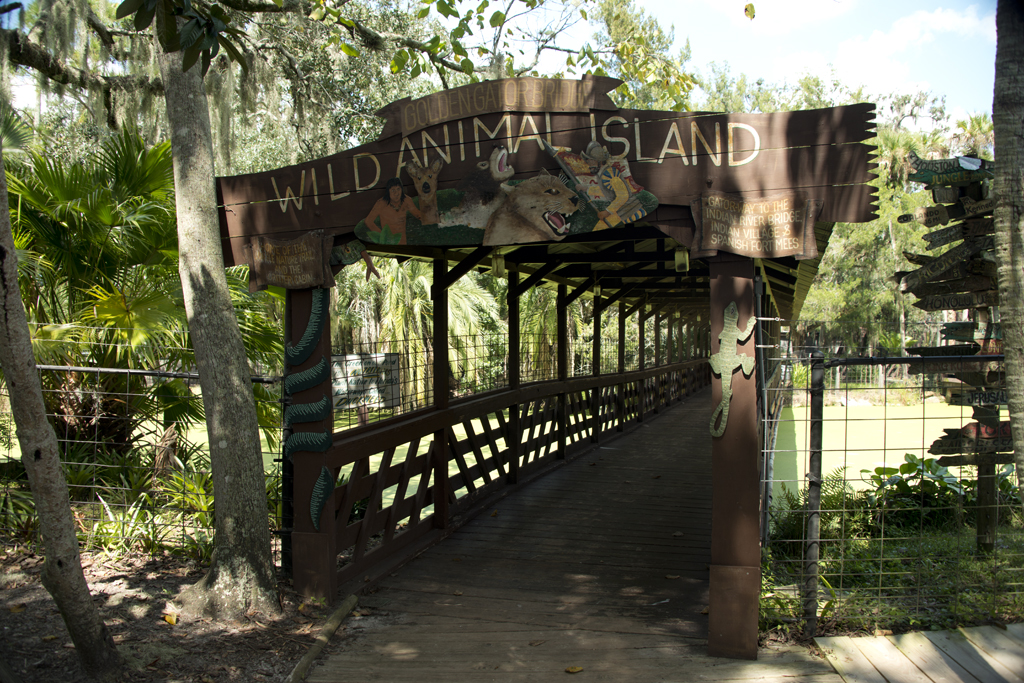 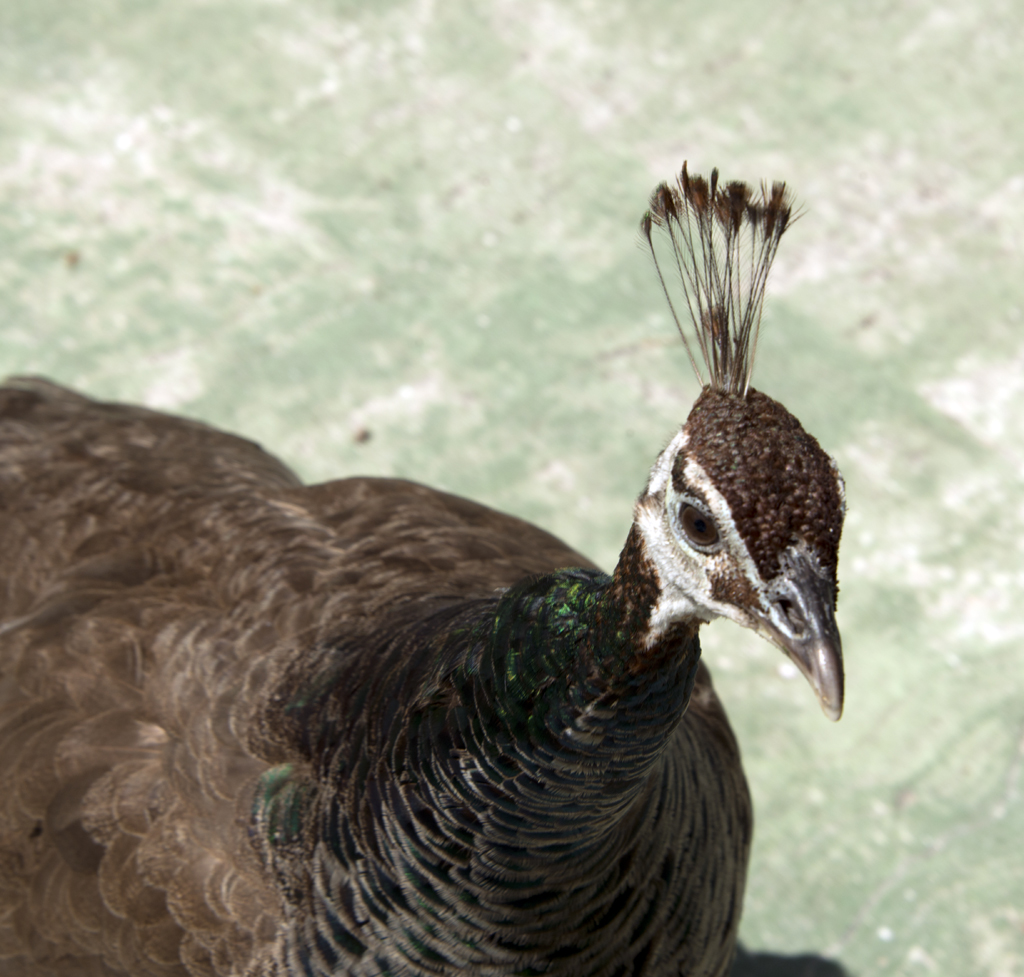 The food bag contained, among other things, cut-up hot dogs you can put on the end of fishing-pole-like thingies and feed to baby gators inside a fenced enclosure: 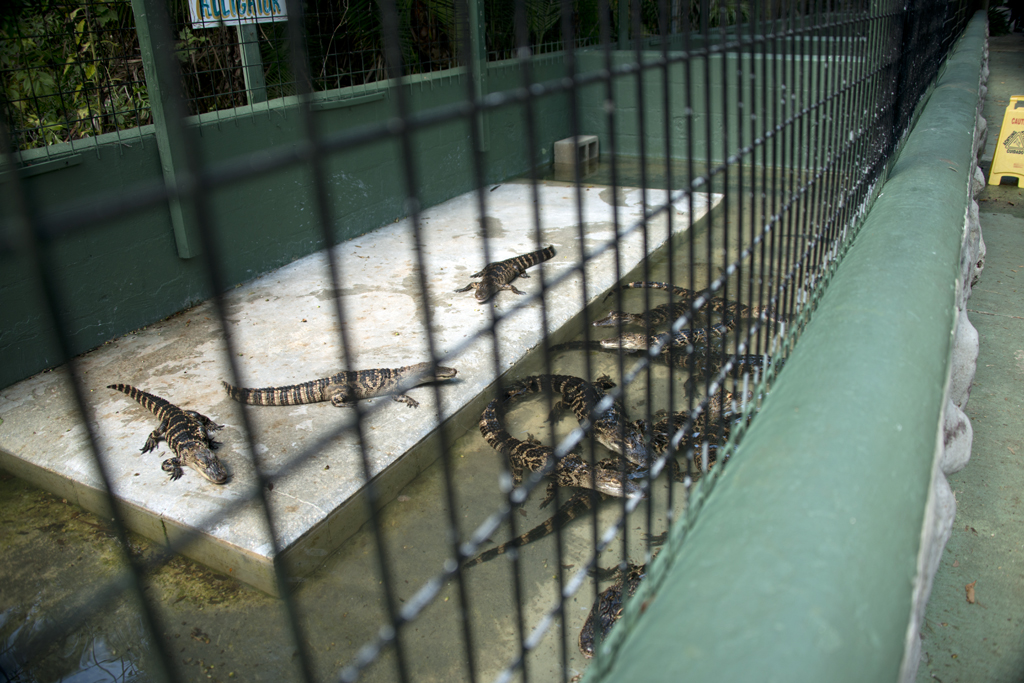 They have lots of enclosures on this island, including one with a wolf and some vultures: 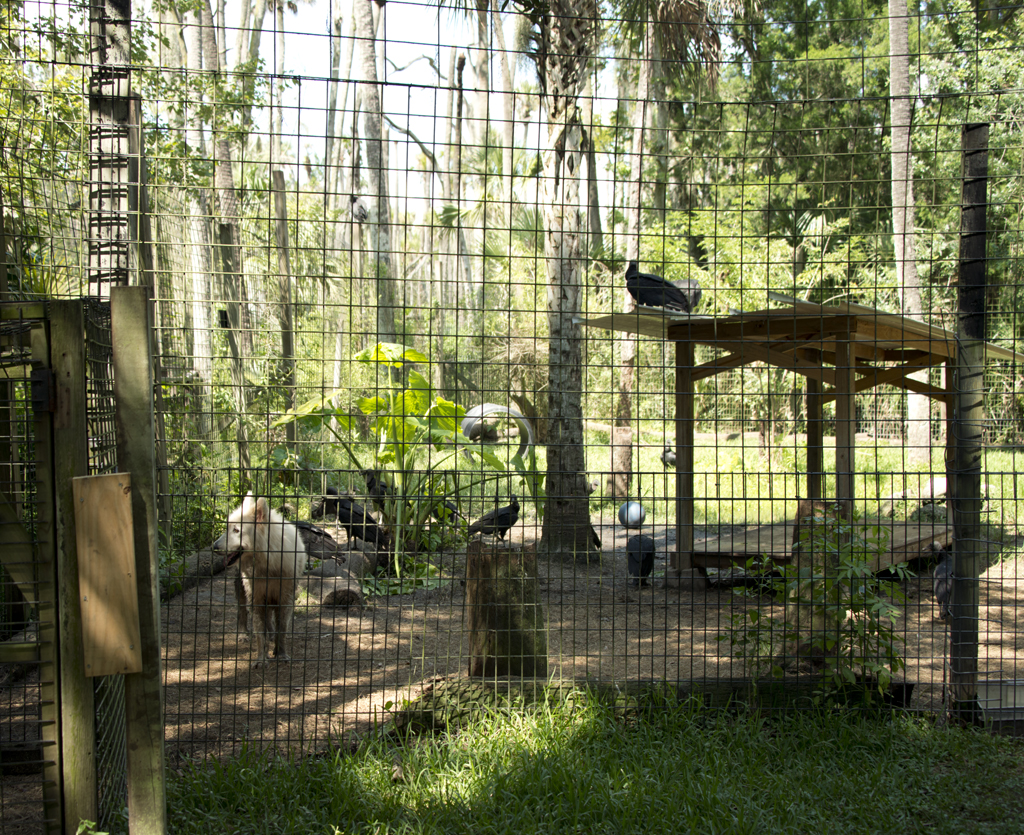 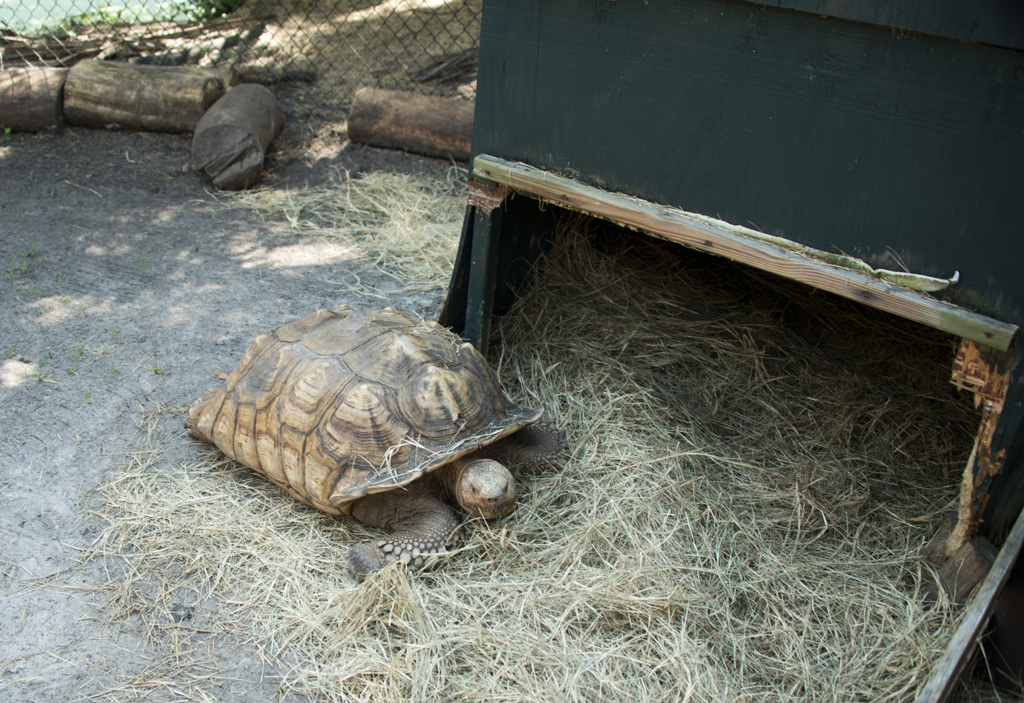 …and some Florida panthers who aptly demonstrated how freaking HOT it was that day: 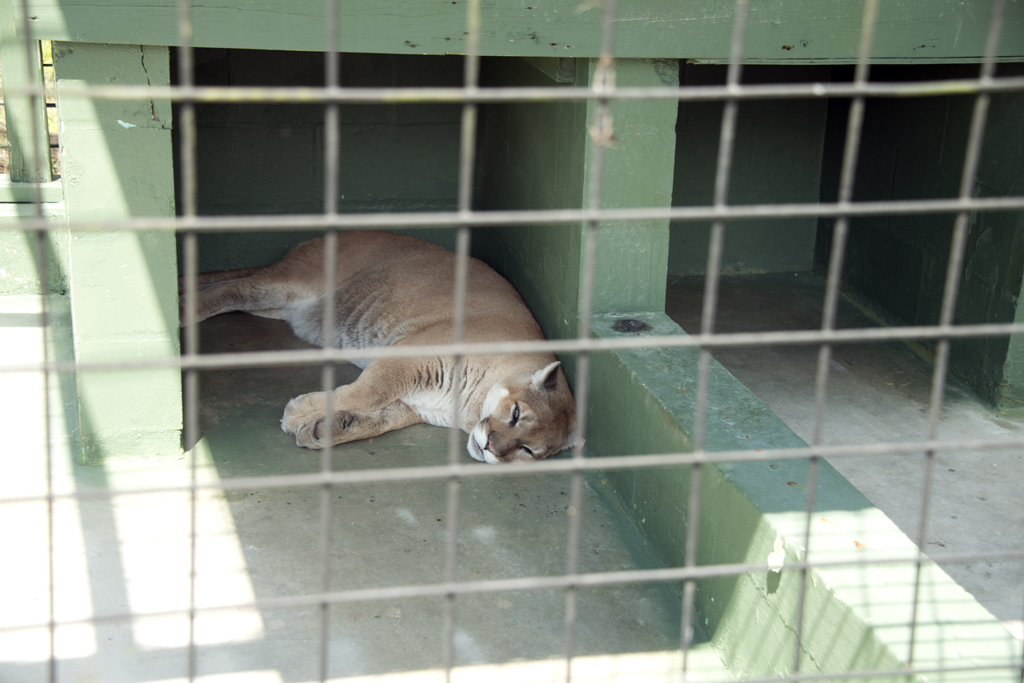 There were other pathways and boardwalks that were blocked off, so I didn’t get to see what else was on the island. I think they are struggling to keep the place viable.

Presently they shouted throughout the island that it was time to feed the big alligators! Here’s what they looked like, lazing in the sun, covered in duckweed below the other end of that bridge: 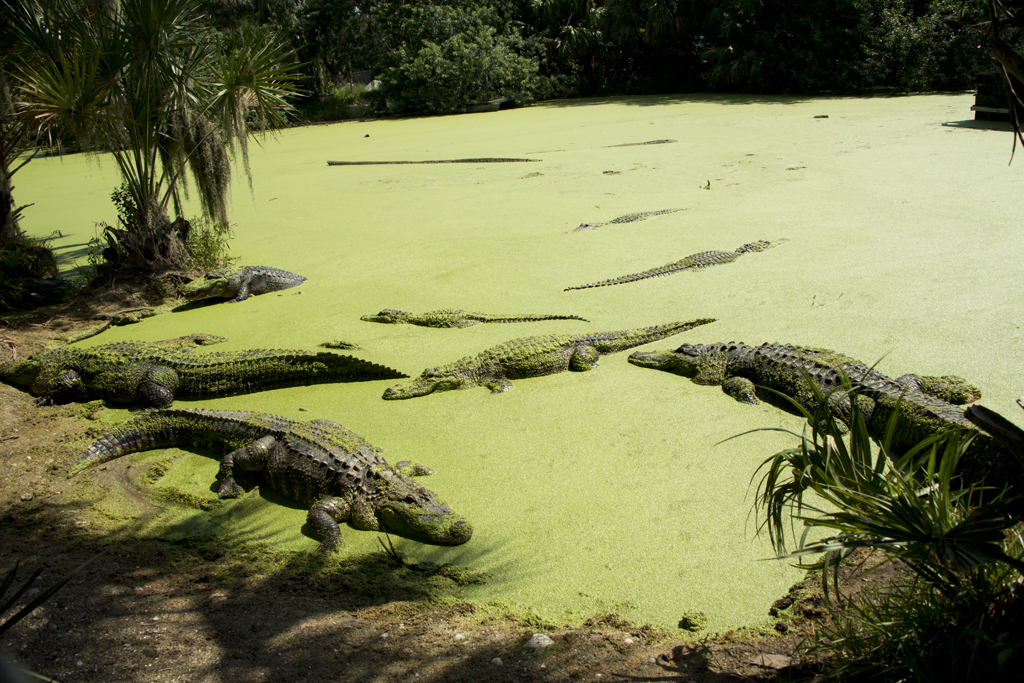 They look so cool! Of course, I can say this from the other side of the fence! A few minutes later a young woman, probably about 20 years old and named Morgan, picked her way from the end of the bridge and down into the gator area. I have never seen anyone so pumped up about alligators! She knew everything about them as a species and as individuals. Then she called them one by one (claims they know their names, which they seemed to) and dangled meat at them: 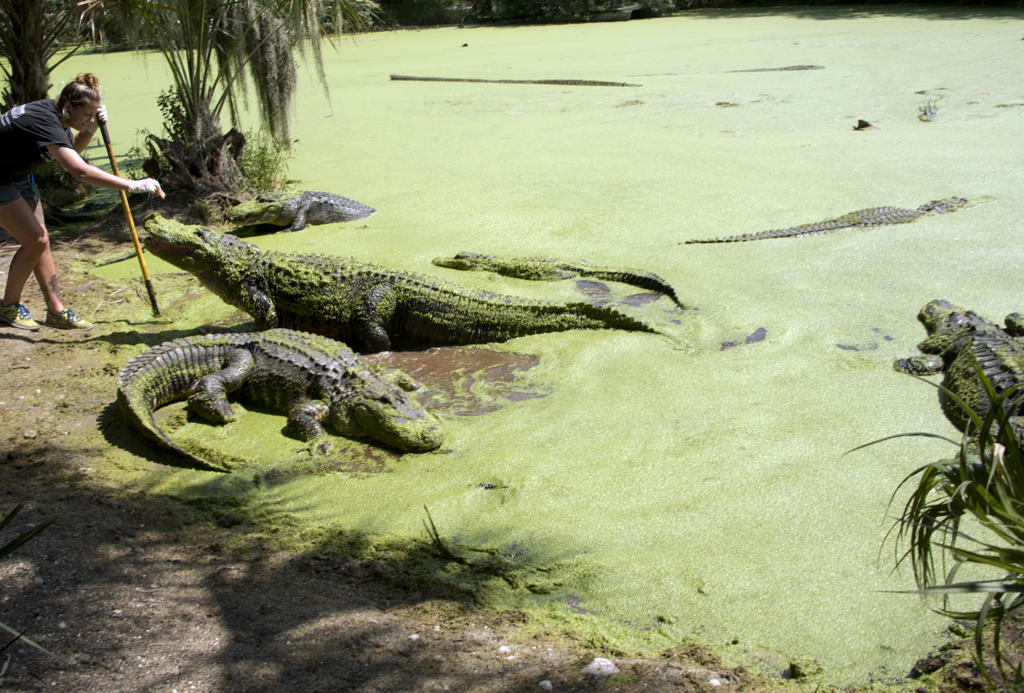 Now I know that it was hot, which makes the gators lazy. And I know they are well-fed (at least once every day), and they know the routine, so it wasn’t as dangerous as meeting the big animals in the wild. But, better her than me! Wow! I shot so many pictures of this feeding show, but these pretty much sum up the event: 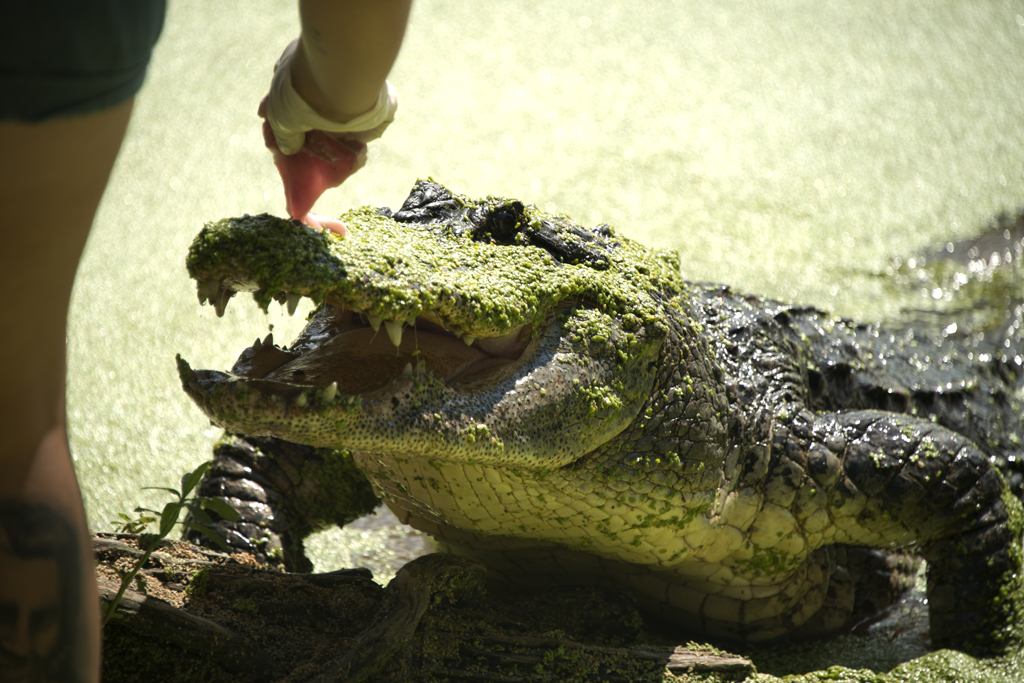 After the feeding, we all (about 15-20 visitors) followed Morgan back across the bridge and to the dock for the boat tour of the swamp. We all stepped onto the electric-motor-powered pontoon boat: 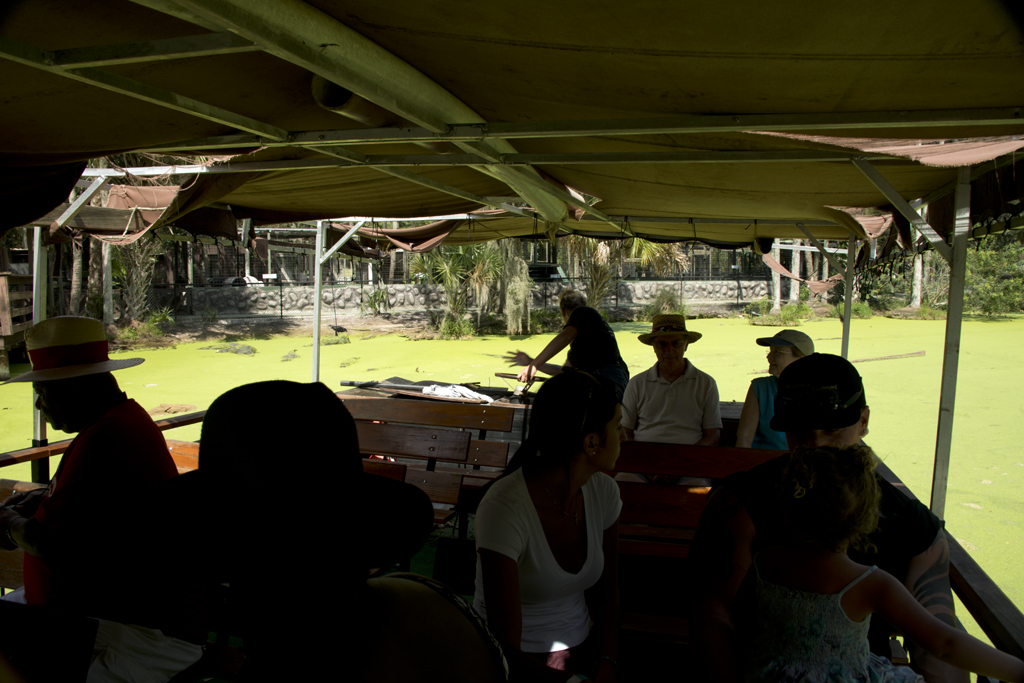 See the gators in the water on the opposite bank? That’s where the feeding demo was. We headed out slowly, making a trip around the island. 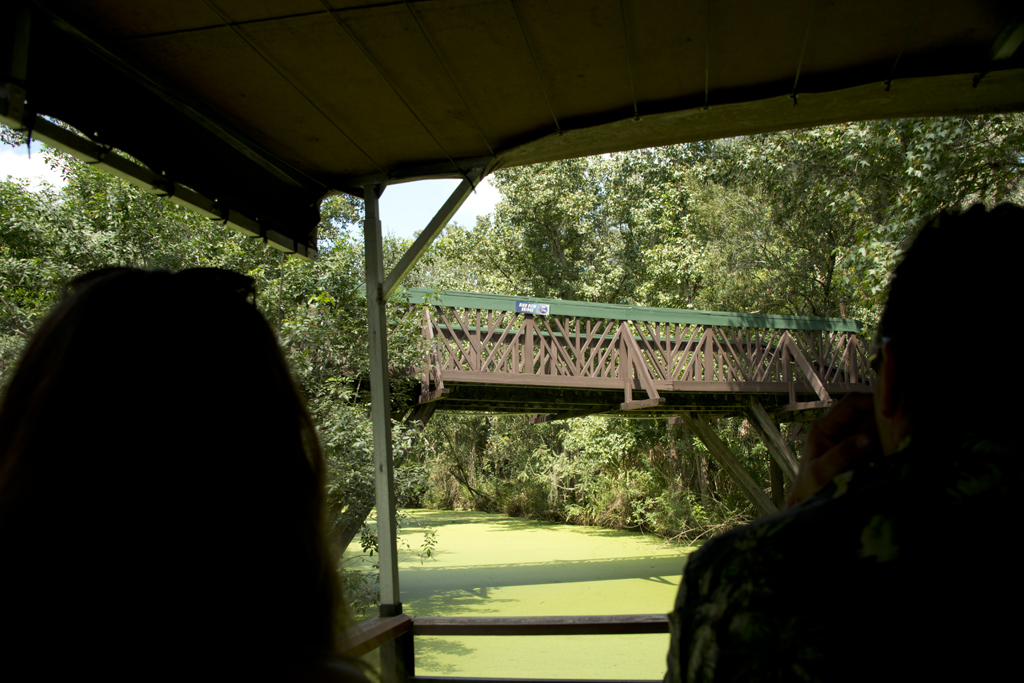 Morgan pointed out the indentations in the banks known as “gator slides” because that’s where gators lie on the bank and then slide into the water: 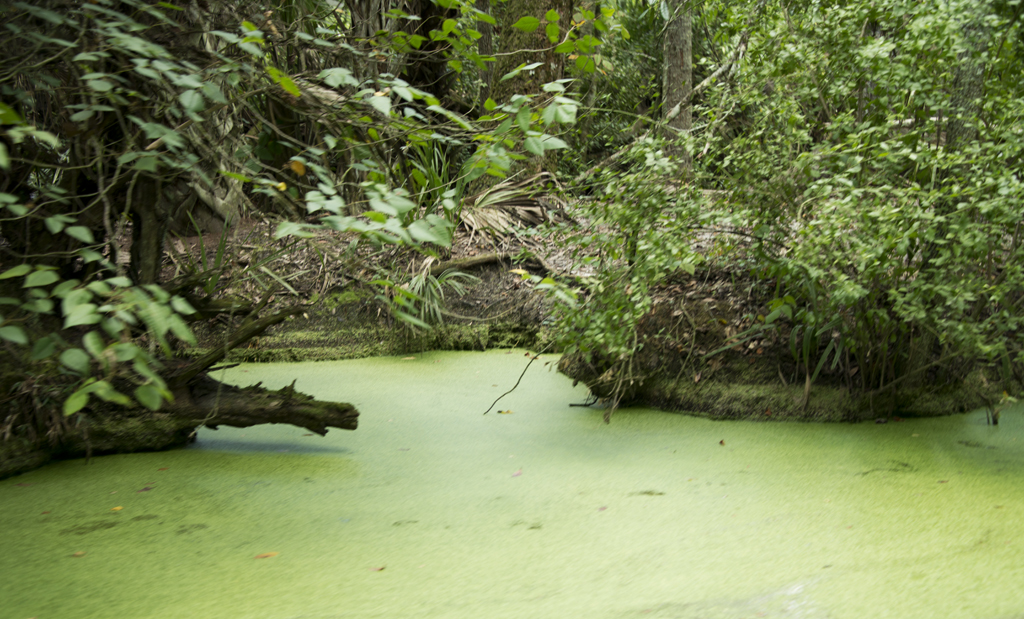 We saw an old Spanish-style wooden building. Morgan told us it was built for a horror movie set and was supposed to be burned in the last scene. “But the movie was so bad they burned the film instead!” 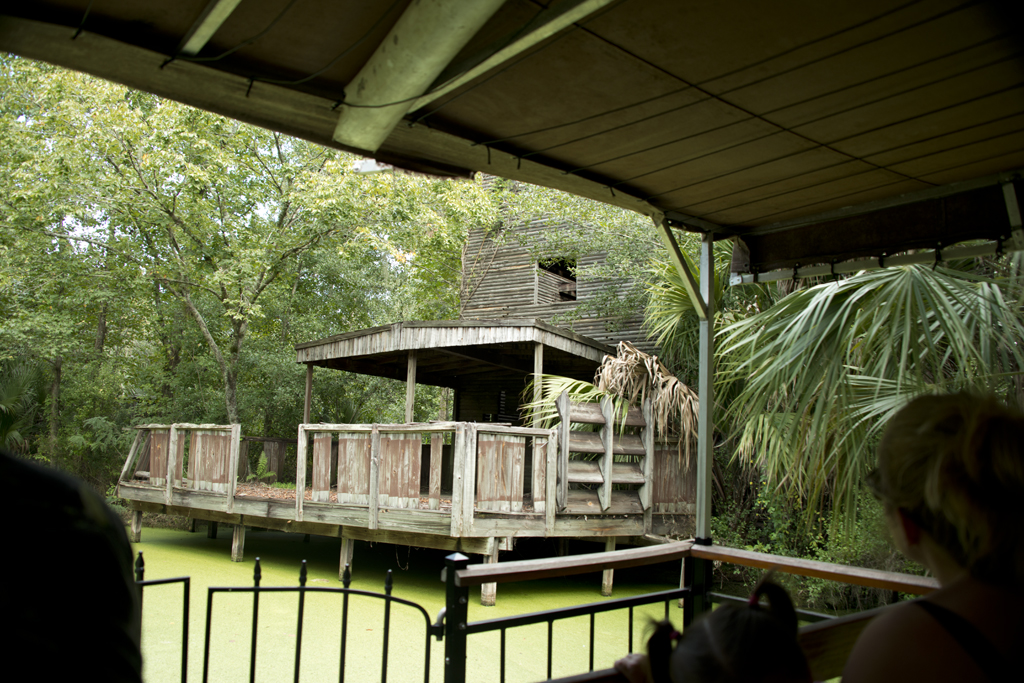 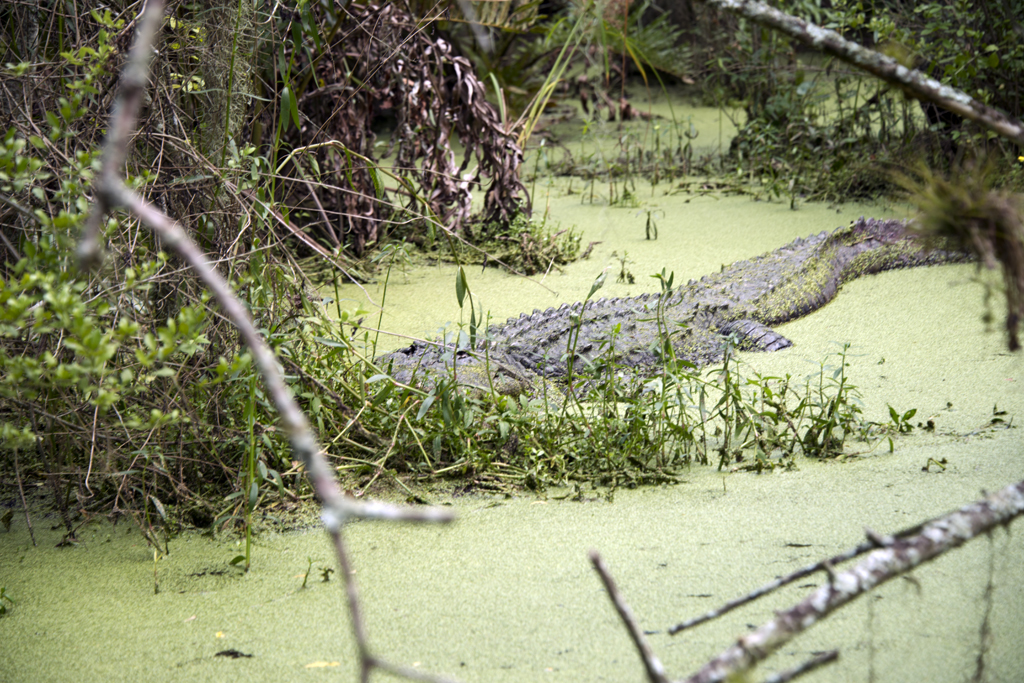 Morgan pointed out lots of Florida nature facts as we made our way through the swamp. She also pointed out an alligator “farm” adjacent to the nature park. There were concrete structures shaped like igloos. She told us they grow alligators there for their hides and meat, which helps keep people from poaching the wild ones. It kind of creeped me out that the farmed gators grow up in the igloos because they grow bigger in constant darkness.

The tour lasted about 20 minutes. I took lots of photos here, too, but it was so dark back there that most of them aren’t very good. I’ll spare you!

When we returned we passed by the Florida black bear cage: 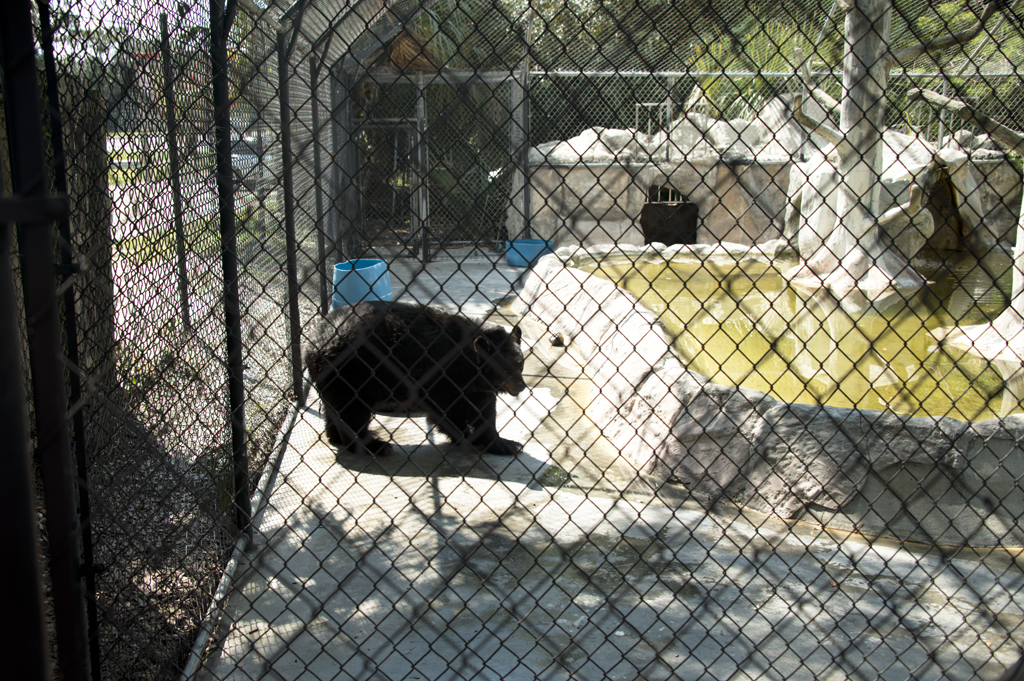 The bears ambled over for the food people were sending down big PVC pipes into the cage, but it was obvious they were just as freaking hot as I was. I left the park shortly thereafter. They offered a Native American Village tour, which I skipped because I was about to pass out. We could see the pavilion from the boat, however, and it looked like they were set up to demonstrate the lifestyle.

All in all, I would definitely recommend this place, although it’s run down and understaffed. You can’t beat their dedication, though, and I just wish I had lots of money to endow the place. The habitats need upgrading, as well as the gift shop and grounds. I love what they’re about, and it’s a picture of “old Florida” as we say that you don’t see often. Just remember, it ain’t Disney!

On a completely unrelated note, I’m including one of my favorite new recipe discoveries. It’s easy and quick and even freezes well. It’s Jacques Pepin’s lemon mousseline. Not that lemon mousseline has anything to do with Jungle Adventures, but I thought I would share a super-easy dessert recipe just in time for the holidays. You can make it while your visitors are off daytripping! 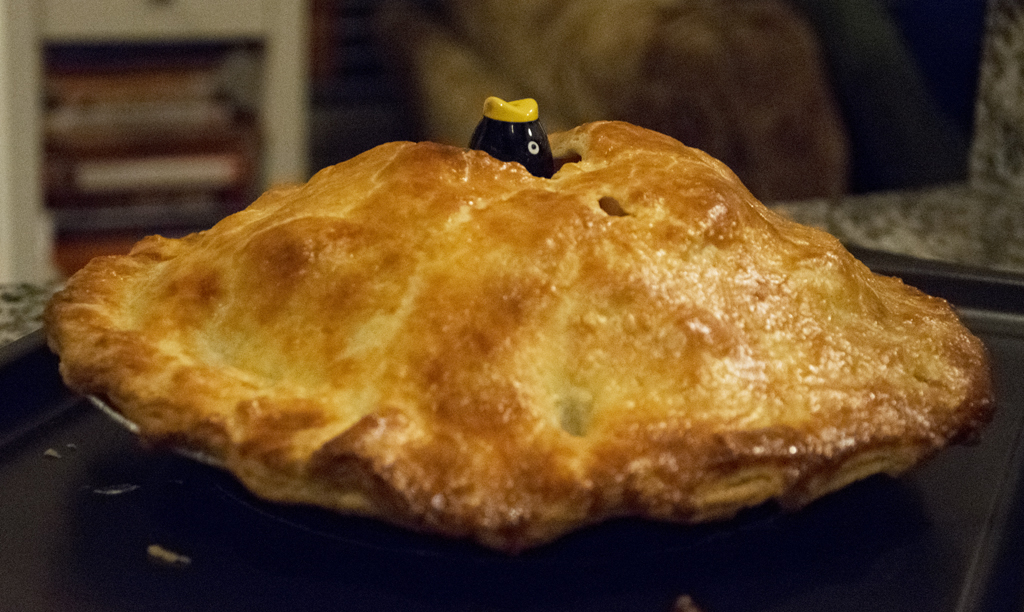