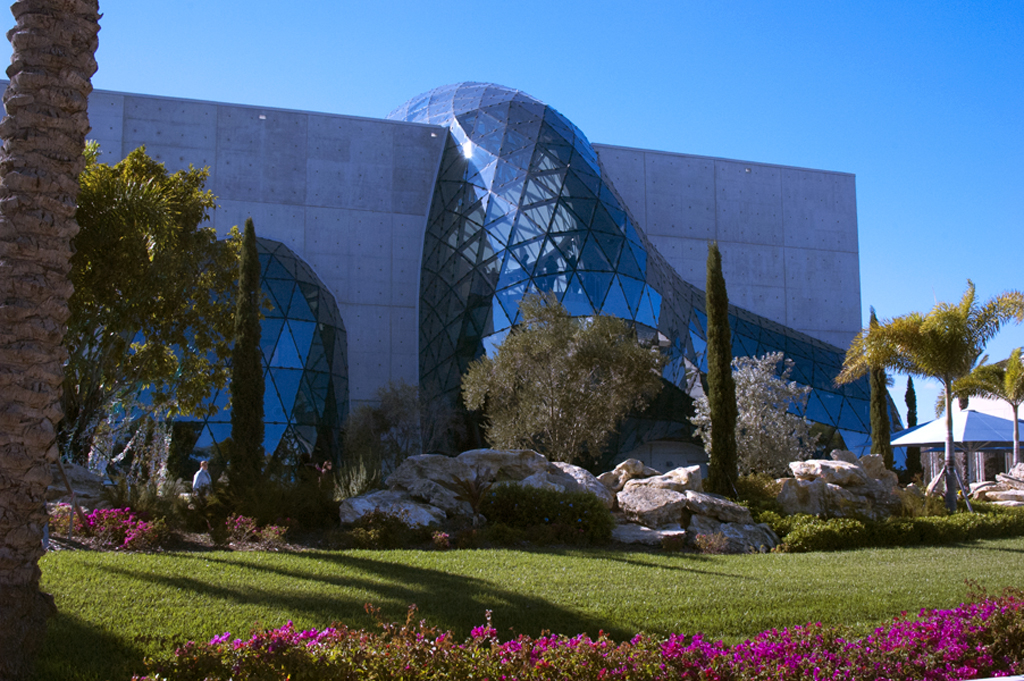 You may have noticed that this year I’m focusing on growing my blog traffic. First a great big THANK YOU to those who have already subscribed to the blog and followed me on social media.

All of those help grow my numbers. So, even if you’ve already subscribed or followed me on something, please subscribe or follow me in additional places. It all helps to build my audience and reach more people. I truly appreciate it – THANK YOU!!!

This week I add another site to my Things to Do in Tampa Bay series.

The Dali Museum in St. Pete Florida is a real destination. And I’m not even talking about the exhibits. Even though they do have over 2000 objects created by Dali in his lifetime, from photos to sculptures to paintings and more. And even if you don’t know who Dali is – and where do you live that you don’t know that – the building that houses the collection and exhibits is something to behold.

You see, Dali was a surrealist artist, which means everything he put his name to had an odd twist or two or three, bending the real world into what I think are interesting, thought-provoking, entertaining creations. I know most of you have seen the melting clock image – that’s Dali.

So, in keeping with that kind of theme, the building itself looks a bit surreal as well. To me it looks like a concrete warehouse being consumed by some kind of huge glass slug. 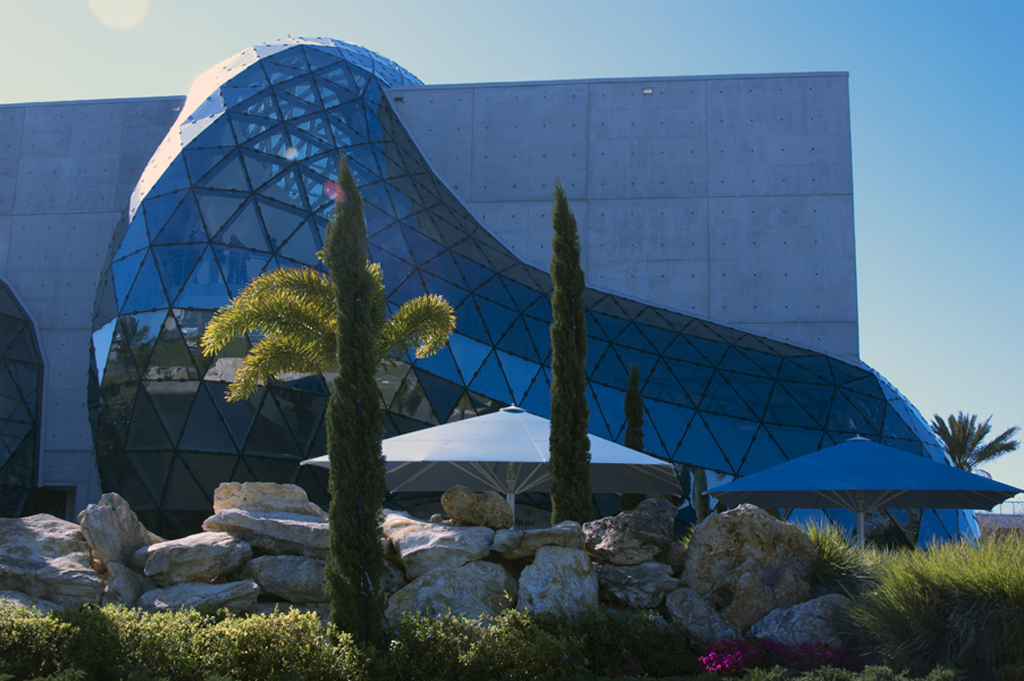 Not so on the inside, though. Come through the doors, which is just around the right side in the photo above, and get your ticket at the counter. I’ve been there three or four times, the last time being just a few weeks ago. They’d changed the counter location, which was fine, but the ticket agent was less than hospitable. Even when I tried to get him to loosen up a little he was hostile. Anyway, don’t let that stop you; I just thought it was out of character.

After your ticket you swerve off to the right where friendlier staff are next to the elevators to help you. Just in front of the elevators is the desk for the audio tour equipment. The foot traffic flow isn’t the best in there, and there was much milling about. But it isn’t so big you can’t find your way. On the other side of the audio equipment desk is a spiral staircase which is inside the giant glass slug you see from the outside. In true surrealist fashion, it appears to be going nowhere: 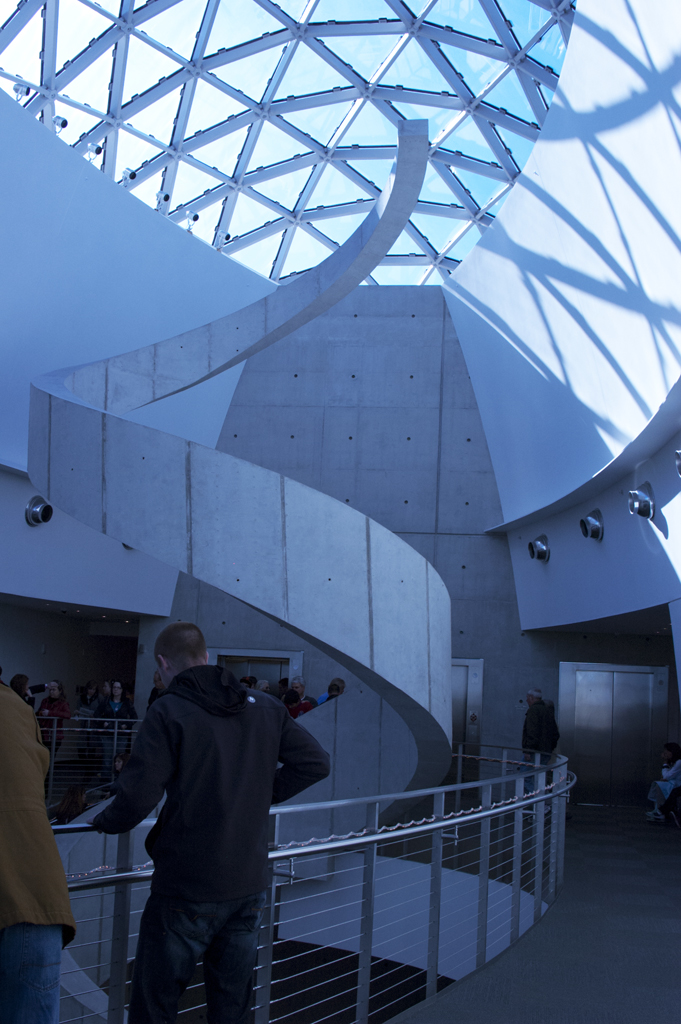 It will actually let you off it onto the second and third levels where the exhibits are. The permanent collection is housed on the second and temp exhibits on the third. The atrium, which forms the giant glass slug, goes all the way to the roof, as you can see in the above photo. There’s even an observation deck on the second level. 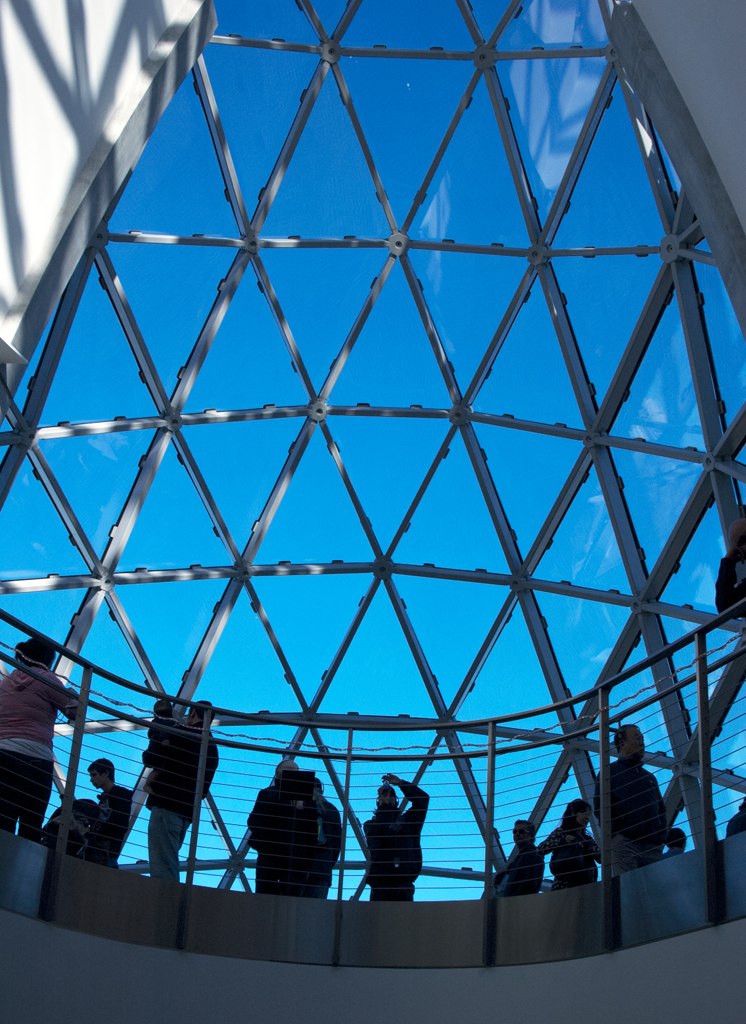 From the second level you can look down onto the cafe: 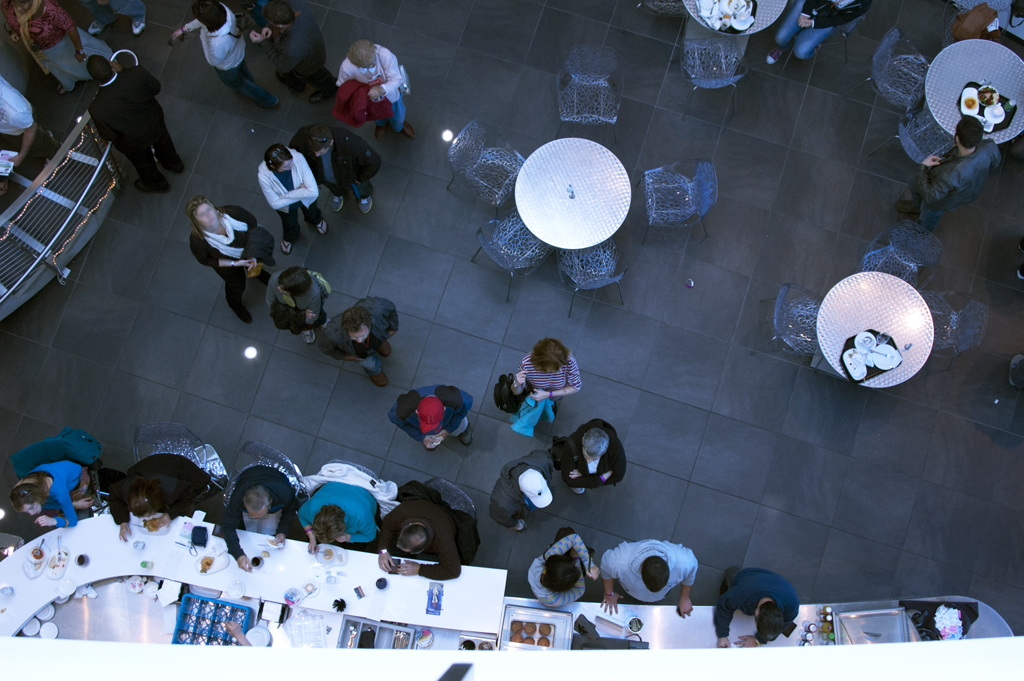 That photo is one of my favorites, partly because I have a small series of photos that look down on cafes. Not intentionally but I like the abstractness of the lines. Especially here. Note the form of the line of people. The woman on the corner of it was looking at me taking the shot – I blurred her face, but I quite like the fact she’s the only one, but there IS one. I love the circles of tables surrounded by the empty chairs amid all the hubbub, too.

I did a lot of abstract photos that day and on other occasions. It’s much easier when there are fewer people, but I’ll take what I can get. With this shot I used Photoshop to add an HDR effect: 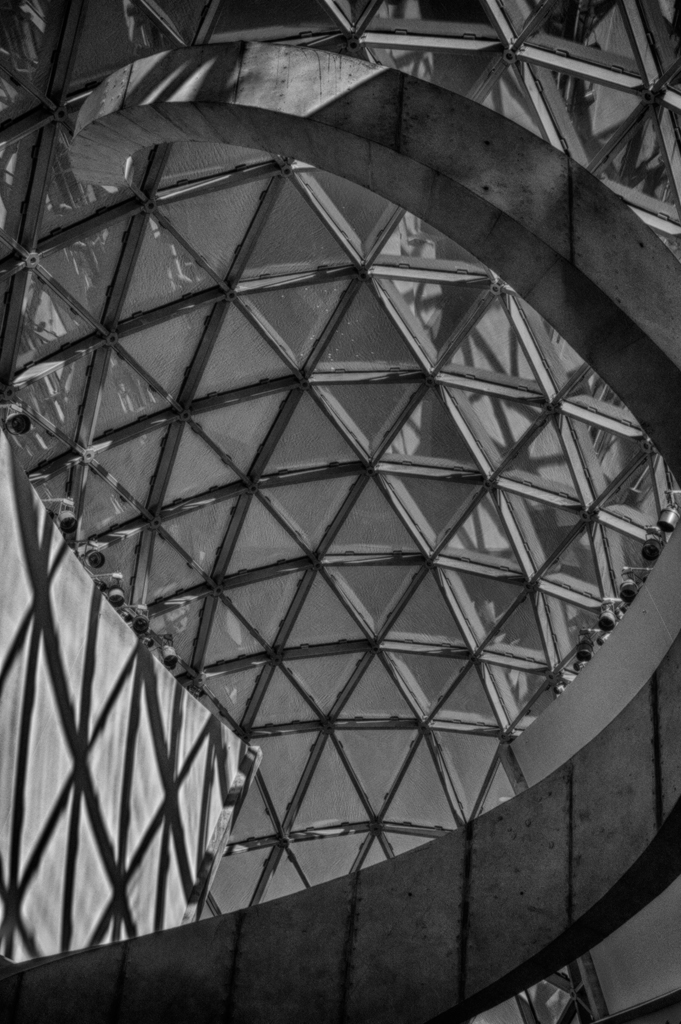 On my most recent visit I was there to see the Freda Kahlo temporary exhibit. It was even better than I expected, including lots of biographical information about her and many original artworks that I’d never seen prints of. She’s there til April 17 this year, so go if you can. 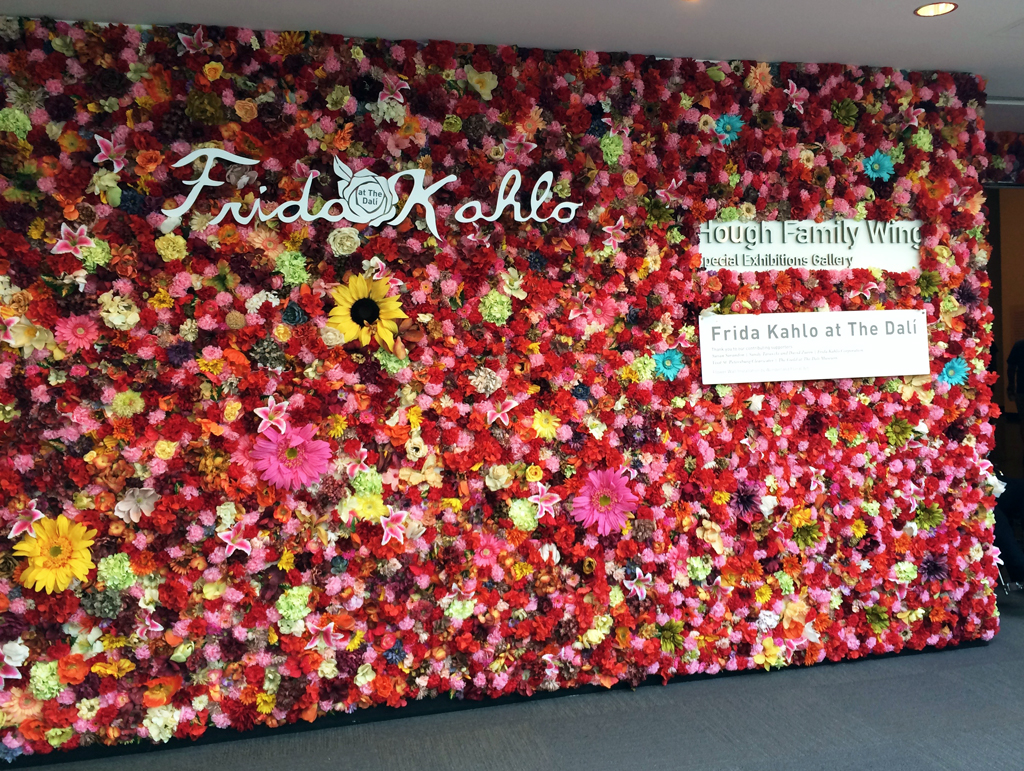 The museum has a fun gift shop, thought it’s laid out kinda whacky, too, just behind the ticket counter and opposite the cafe. When I was there I kept wishing the place was better organized. But on second thought, maybe it was all intentional – Dali would have wanted it that way!

Outside is calmer; you can take your cafe treats outside to some tables there. And there is outdoor art as well as a very small labyrinth next to the street on the corner. Looks like a kiddie playground, really, but the grounds are well landscaped and very well kept.

Across the street you can see Tampa Bay, along with highrise hotels and rows upon rows of sailboats docked there. You can tell what good weather there was that day. 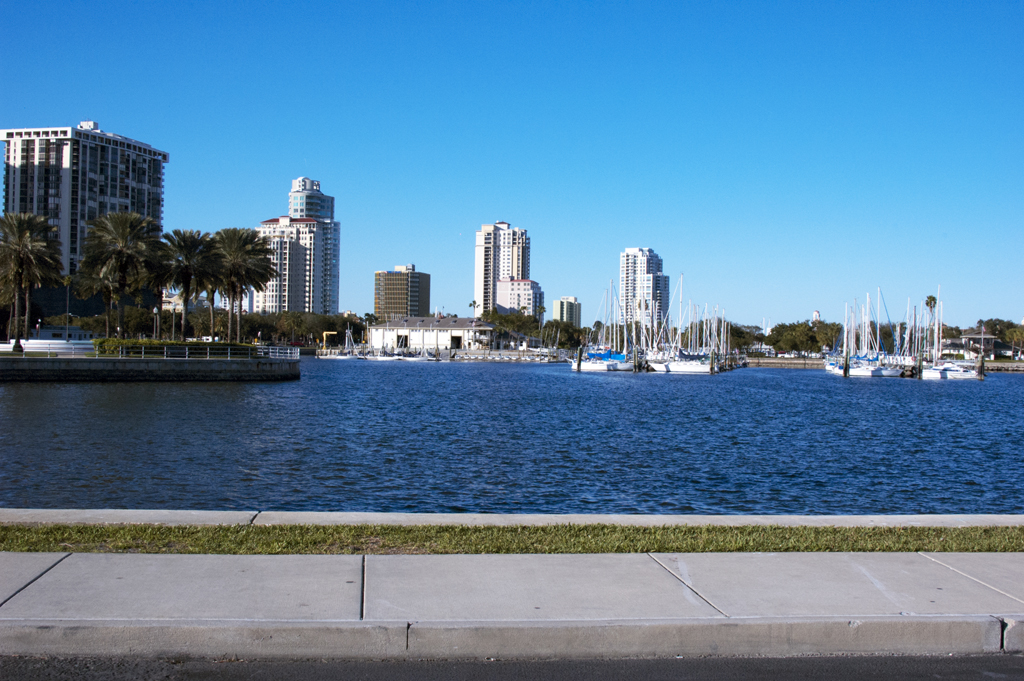 The Dali Museum is pretty easy to drive to. You can take I-275 to St. Petersburg and exit to downtown (I-375). Then go all the way to the water, hang a right before, as my friend told me, before your hat floats, and drive all the way to the Mahaffey Theater. The Dali is just next door. The museum parking lot is a steep $10 per day, so we opted for the metered parking across the street next to the airstrip. Besides, the parking attendant copped a ‘tude when I asked her if I could turn around in the lot to find other parking instead.

Tickets are a little steep, $24 for adults, but there are discounts for seniors, students, kids, veterans, first responders and teachers, with ID. I think it’s worth it, but plan on spending some time. There’s a lot to see. I’d also recommend going on a weekday in the morning so there won’t be so many people there. Hours are 10am to 5:30pm seven days, and til 8:00pm on Thursdays. Photos are allowed as long as you don’t use flash, a tripod or a selfie stick. 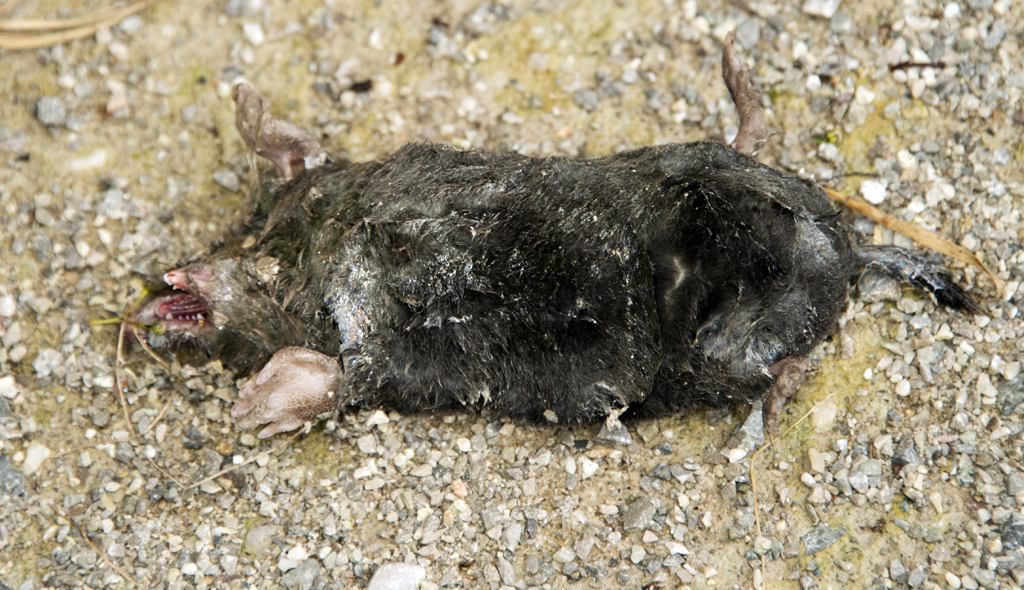