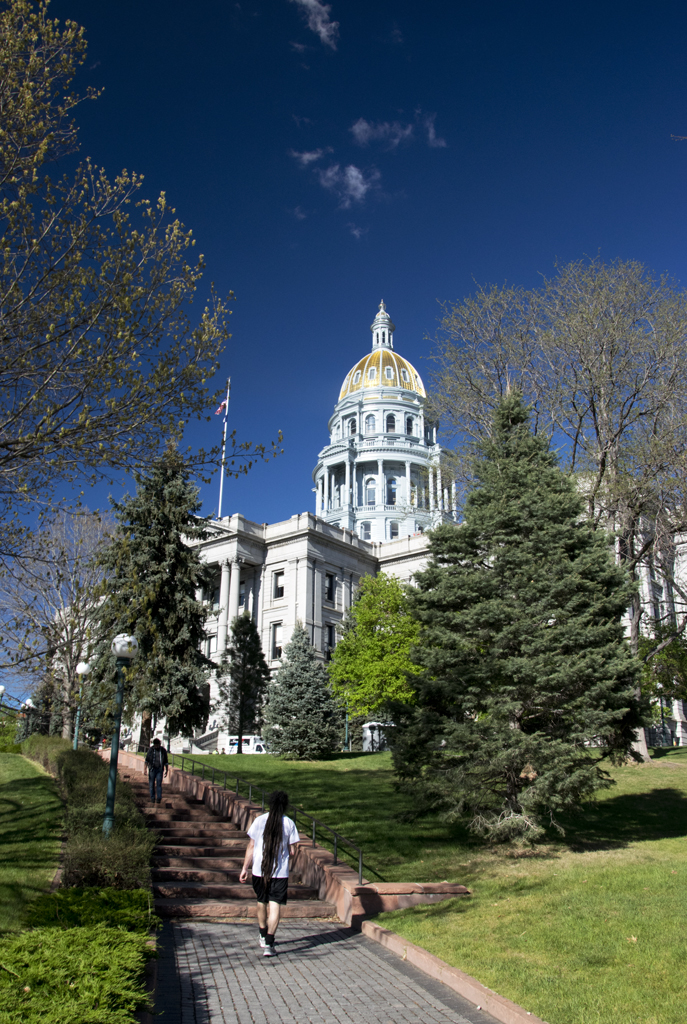 So now I’m a Coloradan, which you know if you read last week’s post. Besides unpacking, my husband and I have managed a couple of outings. The first was just a drive down Colfax Avenue, a 26-mile long street that bisects Denver. It has a history all its own, and I’m dying to take pictures along its route. You’ll see them when I do, if I survive the rough spots!

The second outing is the subject of this post. My husband and I wanted to determine the best way to use the public transportation from our place in Broomfield into downtown Denver. We drove to a Park and Ride in Westminster about 13 minutes from our apartment. Then, after figuring out the procedure there, hopped the B Line train into downtown. That’s only about a 10-minute ride.

Interestingly, we were trying to figure out the ticket machine (and not doing a very good job of it) when the train arrived and then readied to depart. The driver stuck his head out the window and said, “Just get on the train!” When asked what about a ticket, he said, “Just tell him I told you to get on.” Ok. So we ran onto the train and we were off!

When the ticket guy came along, we told him what the driver said, and he just told us to buy a ticket once we got to Union Station, our destination. Can’t imagine a German ticket-checker would EVER do that! We expected an escort at the station to make sure we bought tickets, but no one bothered us. We bought two-day passes for the airport zone, which is the farthest zone and most expensive, so we didn’t save any money from this. But it was cool that it happened! 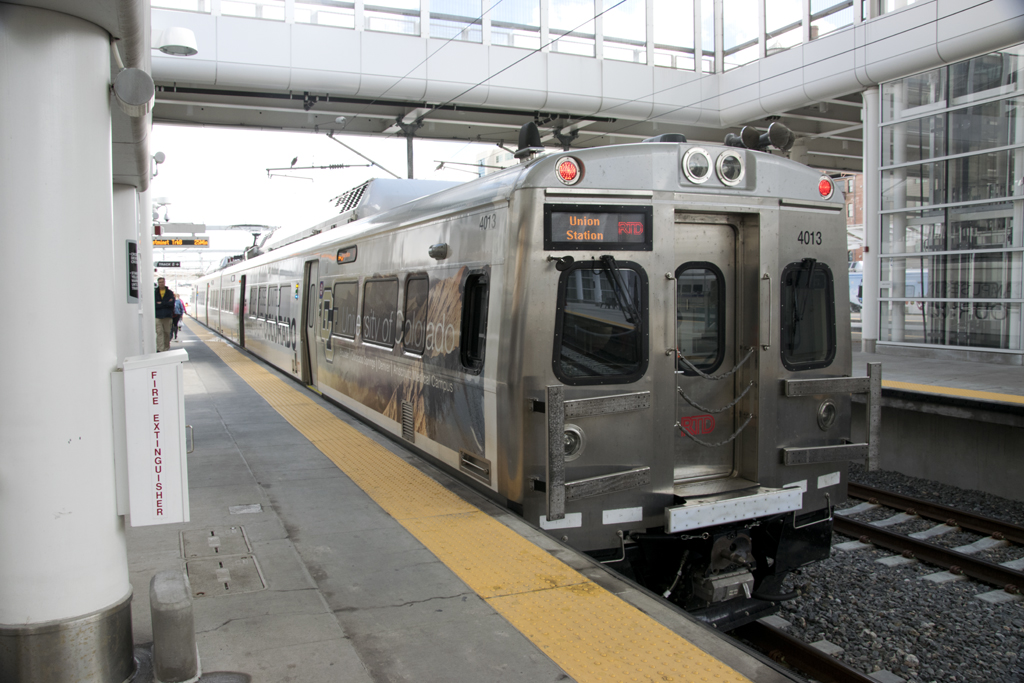 One thing that always delights me is the public art in Denver. Since 1988, any city project over $1 million must spend at least 1% of its total budget on art as part of the design and construction. Here’s something on a temporary wall at the station that hides a construction zone: 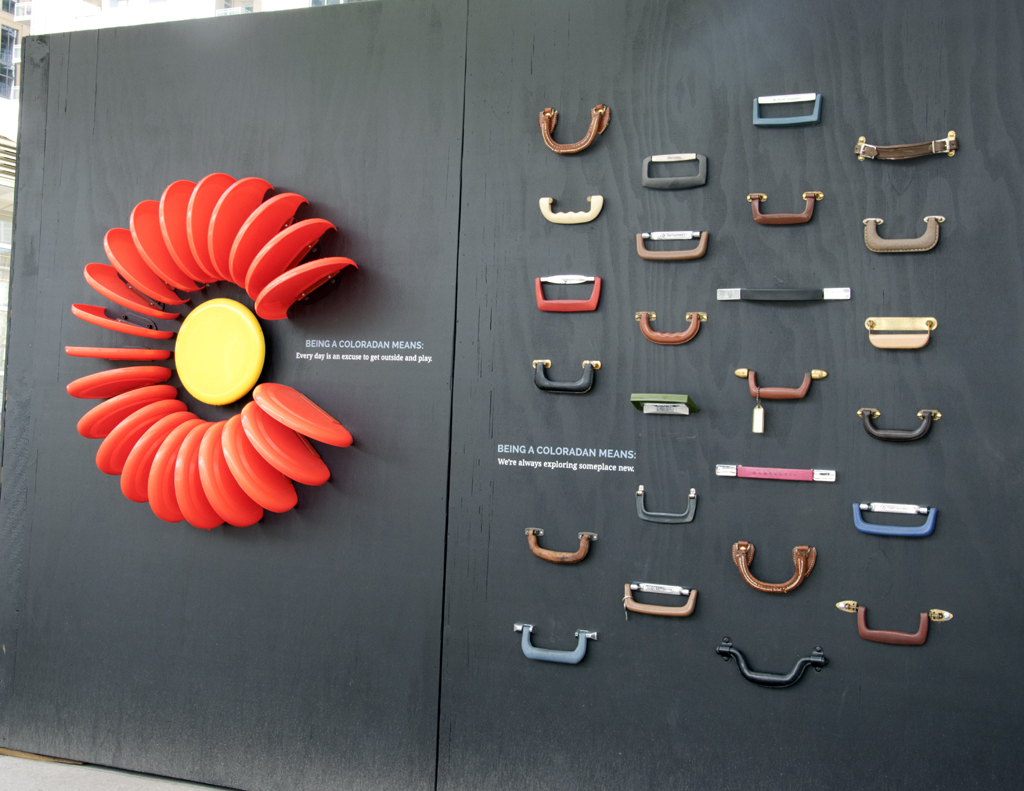 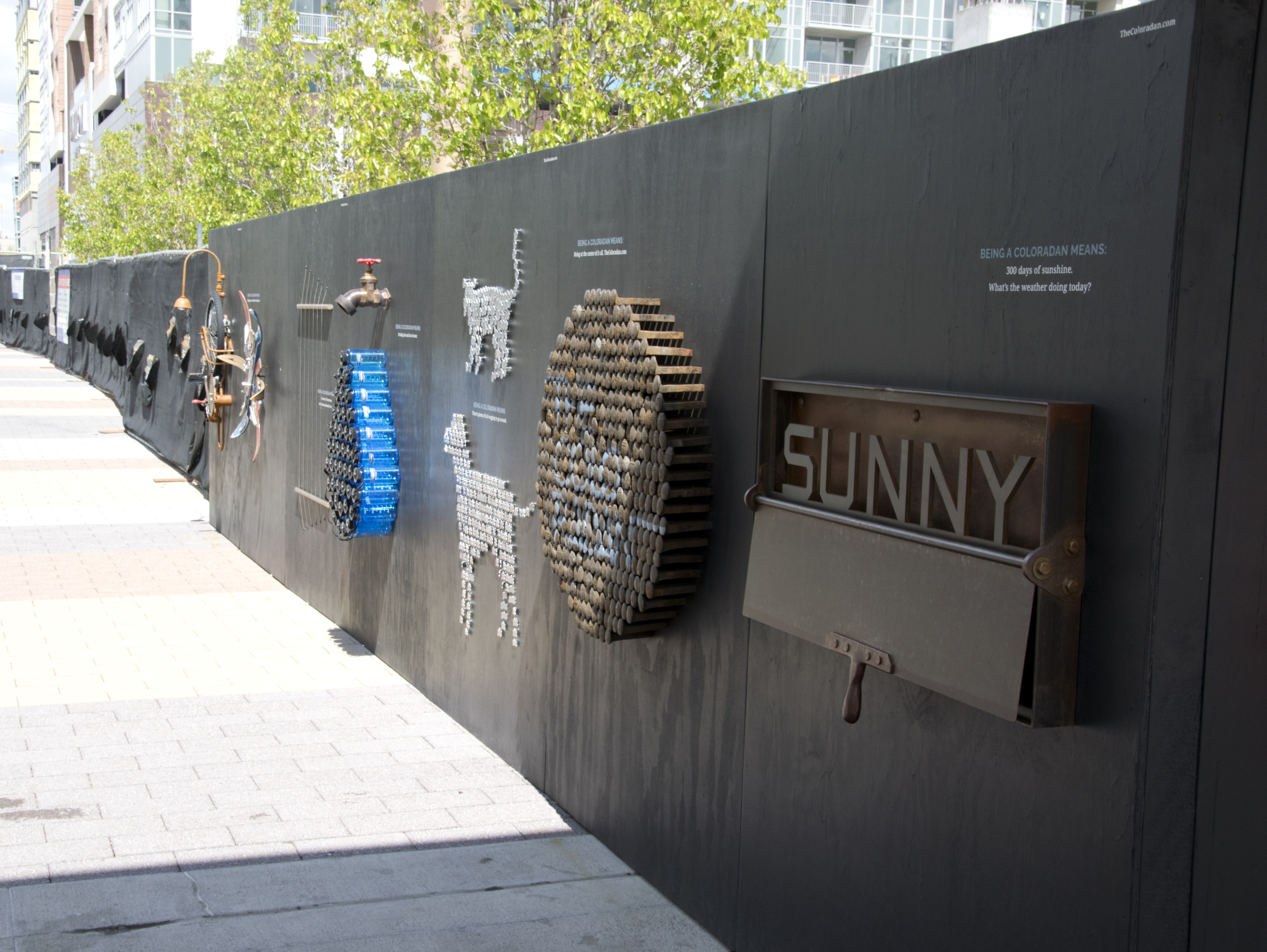 Notice that, in the photo above, the second, circular item is made of railroad spikes and the blue “water drop” is made of water bottles. The text next to each starts with “Being a Coloradan Means” and is followed by something relating to the artwork. The first item says, “300 days of sunshine. What’s the weather doing today?” If you lift the handle it says NOT SUNNY underneath. 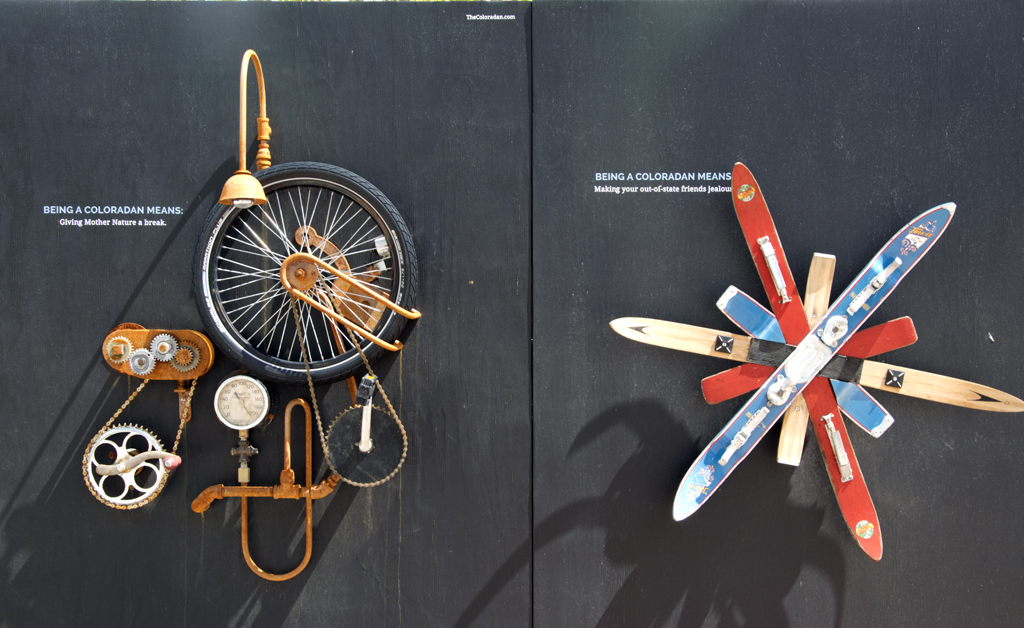 It was on our return trip that we discovered these artworks are interactive. Some kids were playing with them, opening the water bottles and spinning the ski and bicycle ones. Cool. For some more good pictures of Denver’s Union Station, check out my post from last October.

We had lunch at a restaurant in the station called Next Door, where we’d dined last summer during a visit. Still good!

Then we hopped the A Line train to the airport, just to see what changing trains and the route would be like. Denver has seven light rail lines, and the first one opened in 1994. The A Line is the first commuter train line in Colorado, which is a bigger train and larger-gauge rail. The A-Line opened last year. I bring all this up because, due to software problems, the traffic gates to railroad crossings don’t quite work right yet. Thus, they have 24-7 crossing guards in place til they get it all sorted out: 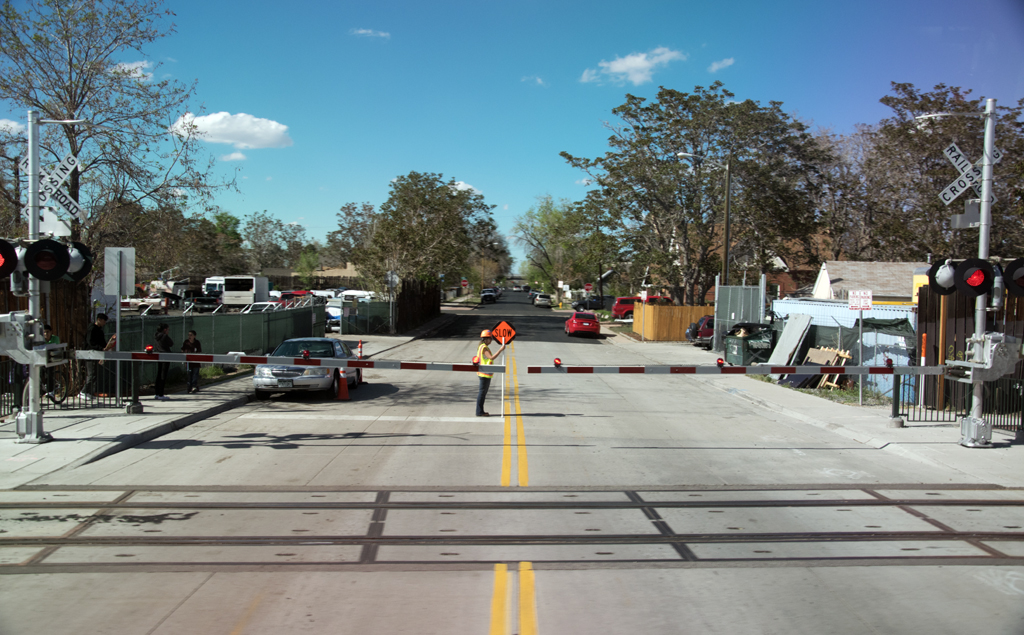 Other fun stuff I saw from my seat on the train: prairie dogs! 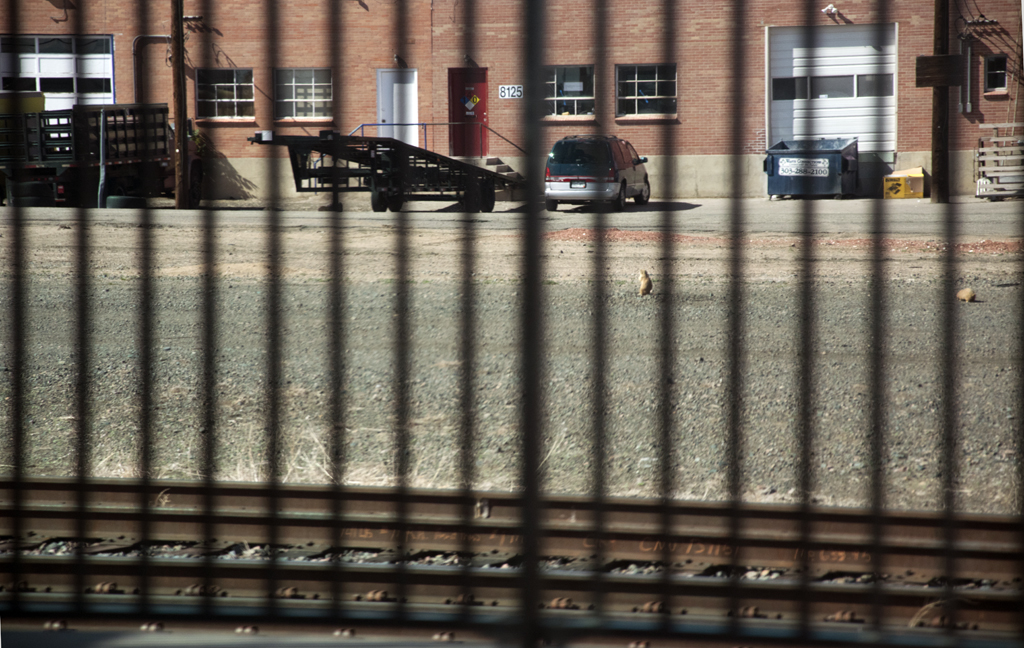 I’d seen some from the car a few days before. I am so surprised they are so near human developments. I’ll have to take my tripod and stake some out one day for better photos.

Next, John Denver was on our train: 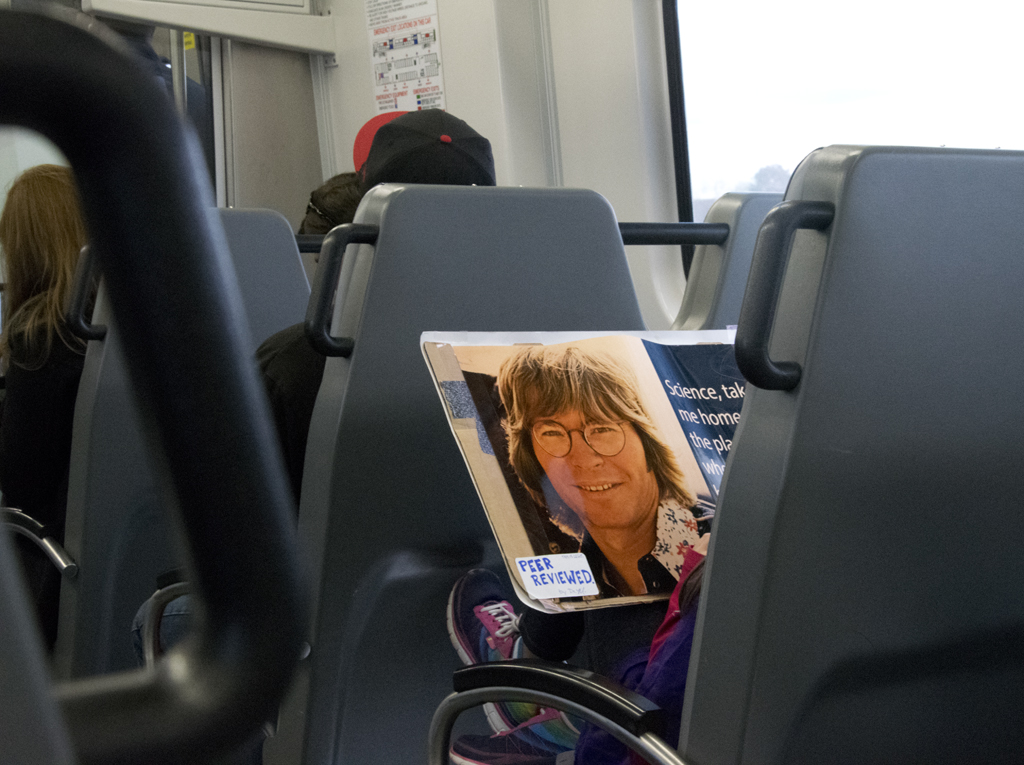 Here’s the train stop at the airport (see the art? It’s the railroad tie/gravel pattern surrounding the tracks): 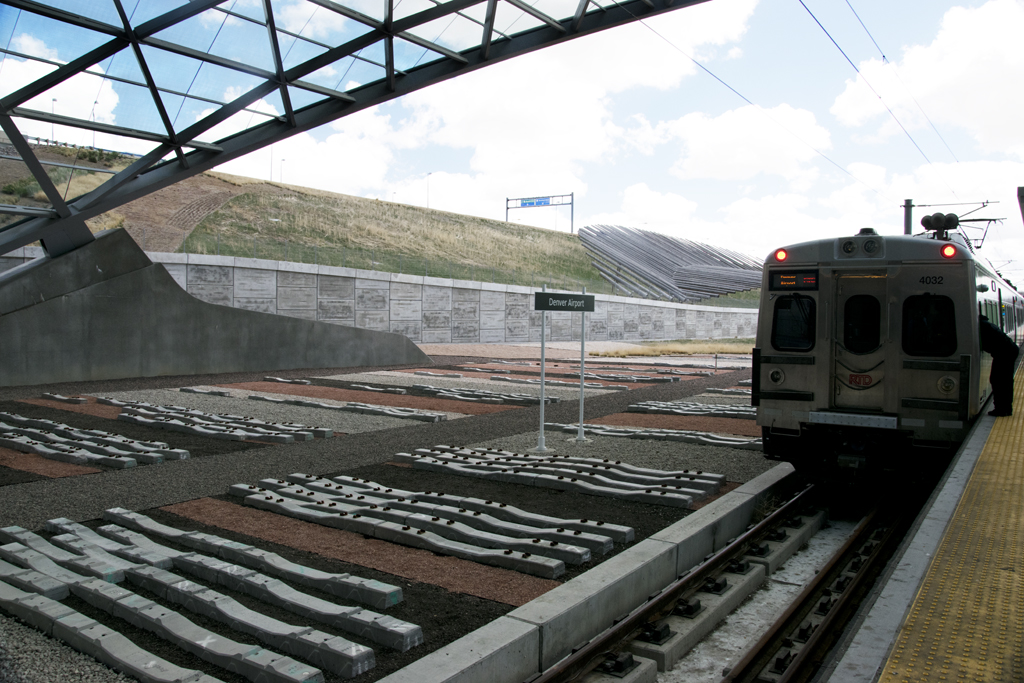 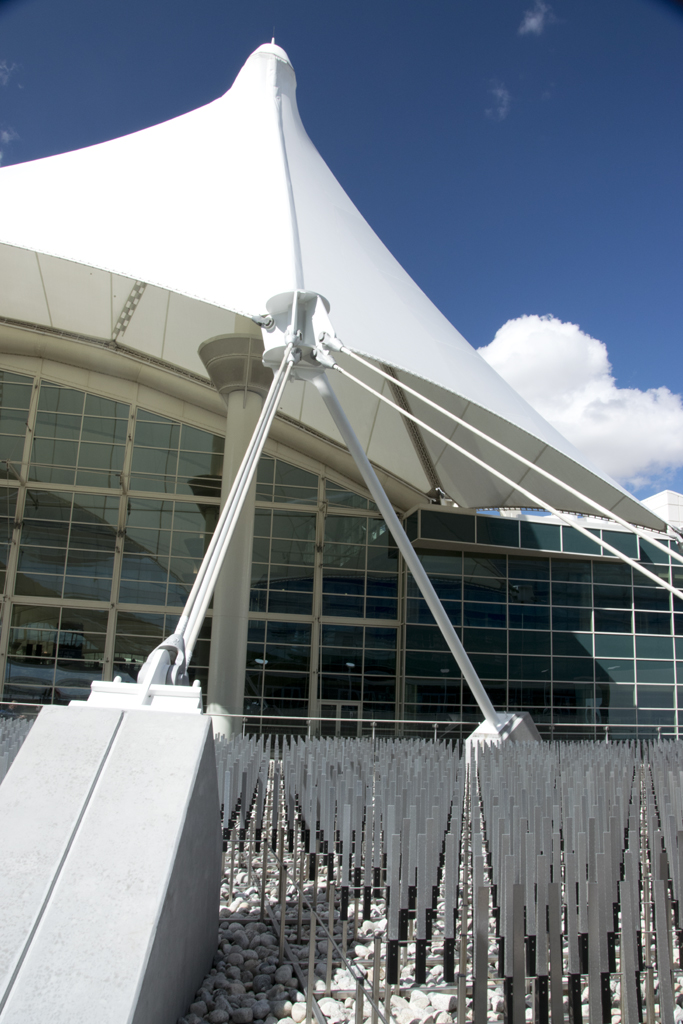 The canopy of the main terminal (above) is supposed to mirror the peaks of the Rockies. I shot this from the outdoor observation deck. The rows of knife-like objects mounted on a metal framework on the rock substrate swing back and forth and mirror the wind that is blowing at the moment. More art; very calming.

Here’s a shot from the opposite direction, looking out over the train stop from above: 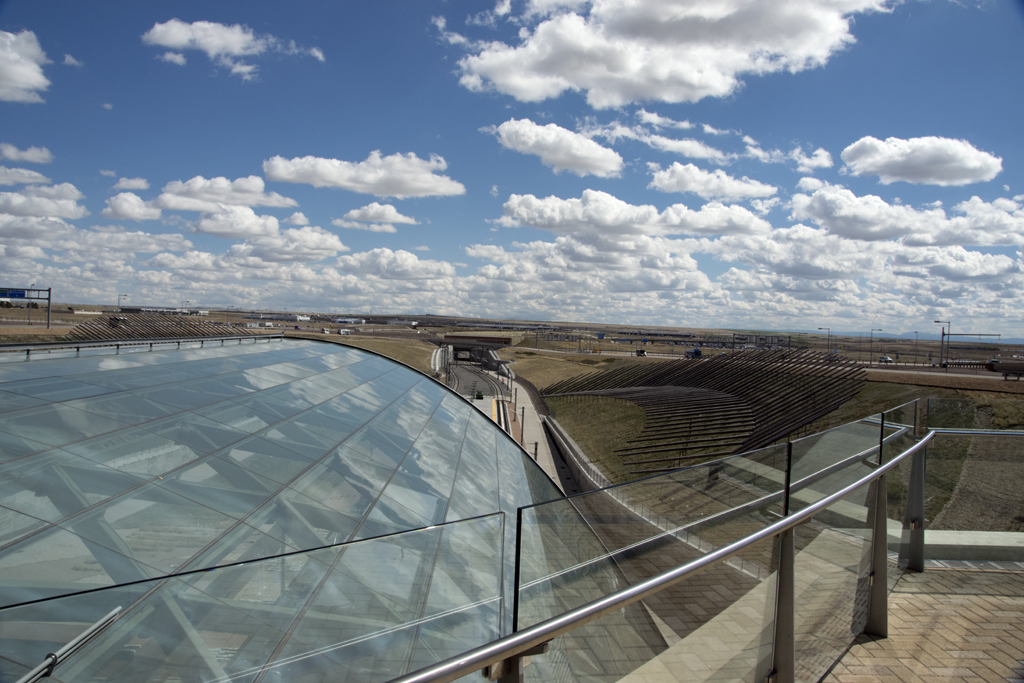 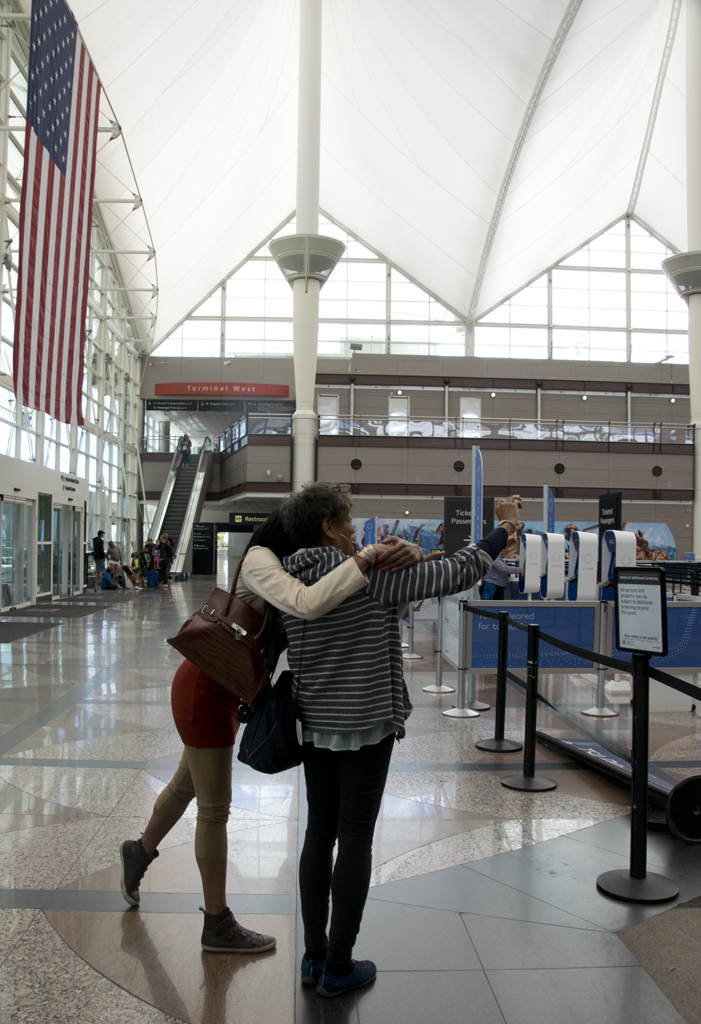 We returned via the same train line and had enough daylight left to ride the free 16th Street Mall bus from Union Station to Capitol Hill. You know Denver is Colorado’s capital, right? I wanted to do the most touristy thing to do in Denver, and that was to stand on the 15th step of the Capitol building where it says, “ONE MILE ABOVE SEA LEVEL”. Cheesy, but fun.

…and, since my husband is a far more attractive model than I am, I’m posting his photo instead of mine: 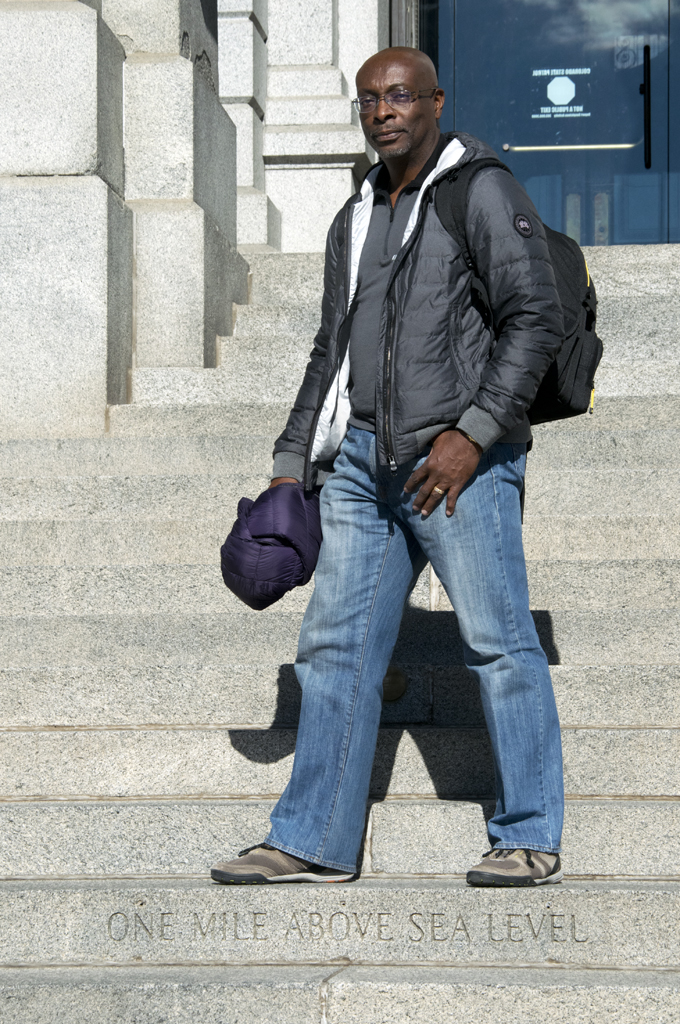 And, yes, there was a line waiting to do that!

All in all, a very satisfying, informative outing. Here are a few more city shots from our excursion that day: 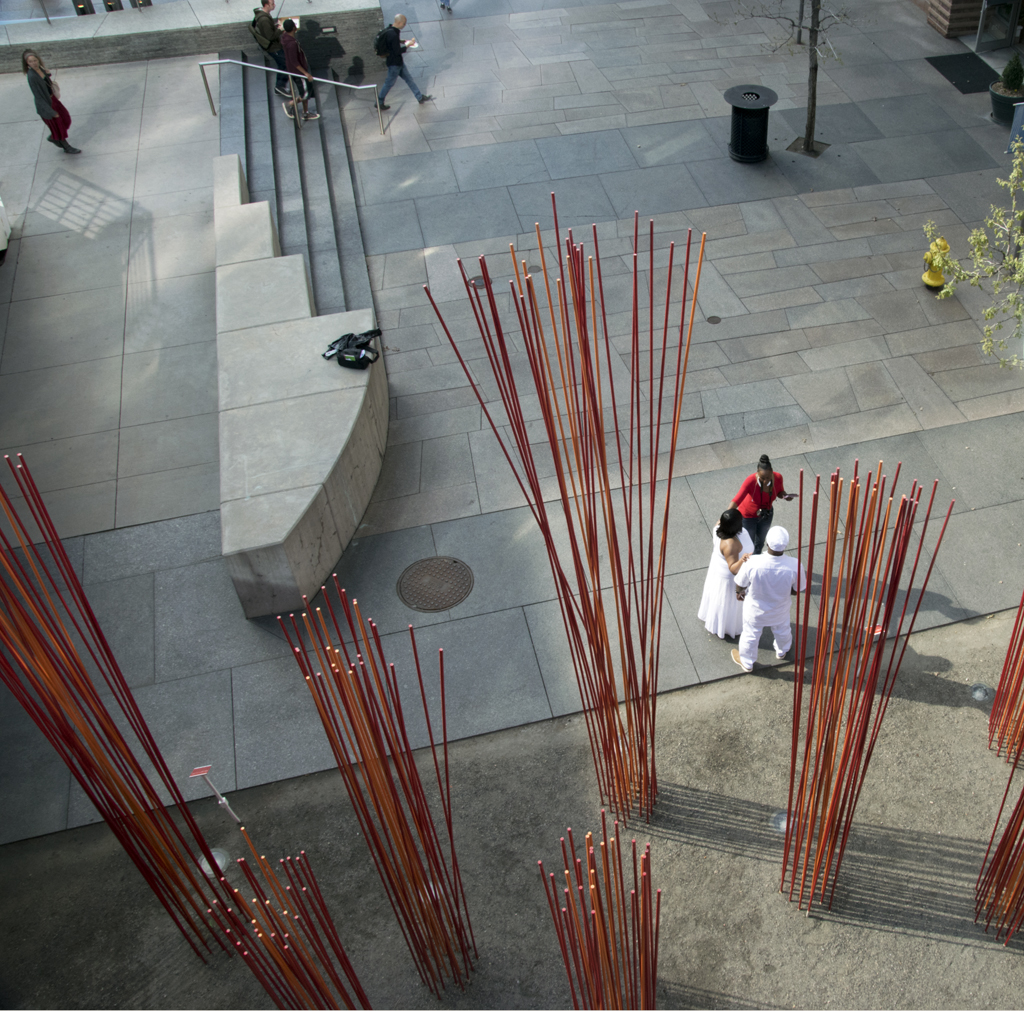 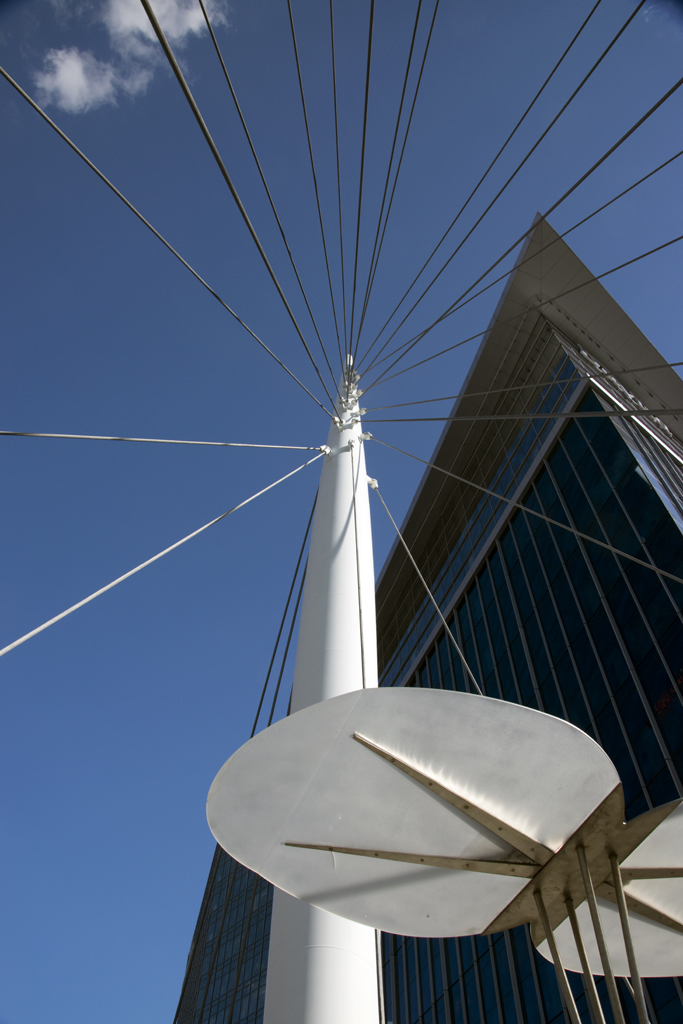 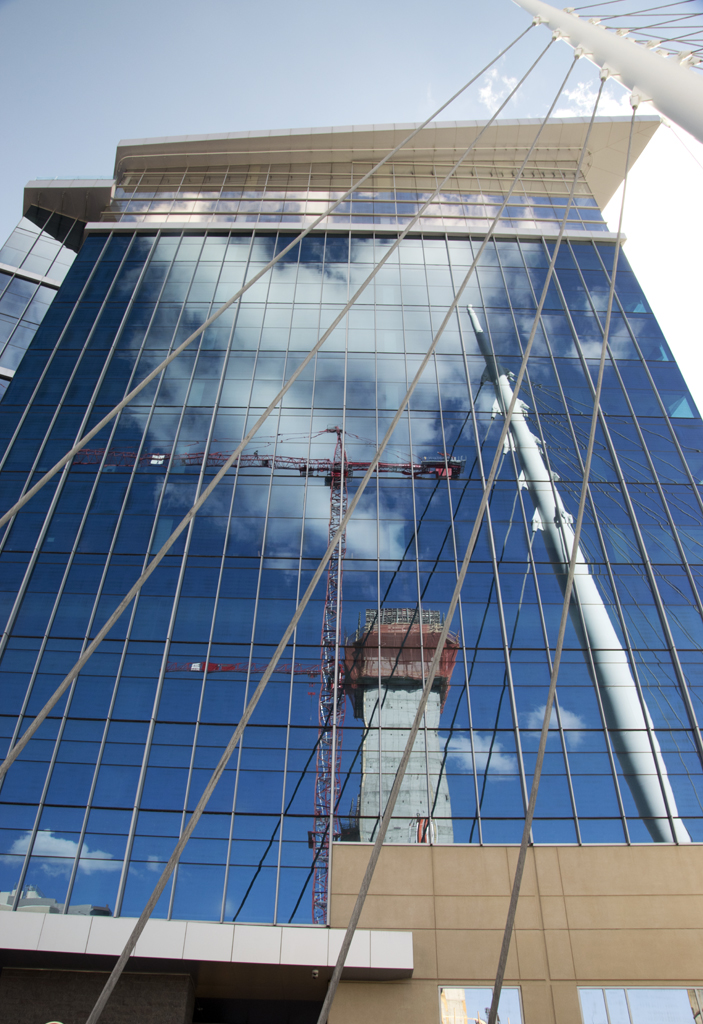 There is so much more to see and do in this area and I’m loving getting to know it. I hardly know where to start, but I’m sure you’ll see the results of my explorations as they happen. 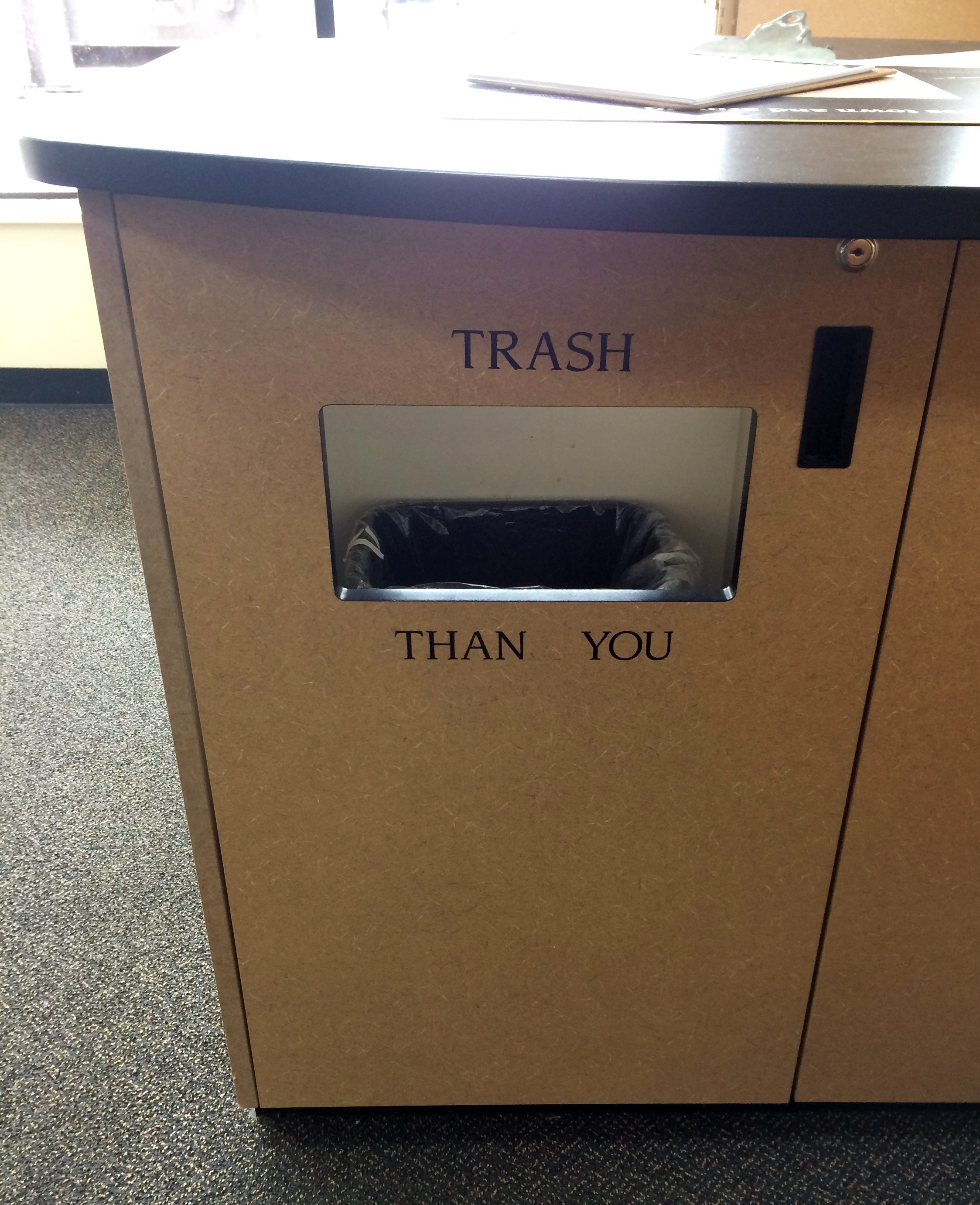