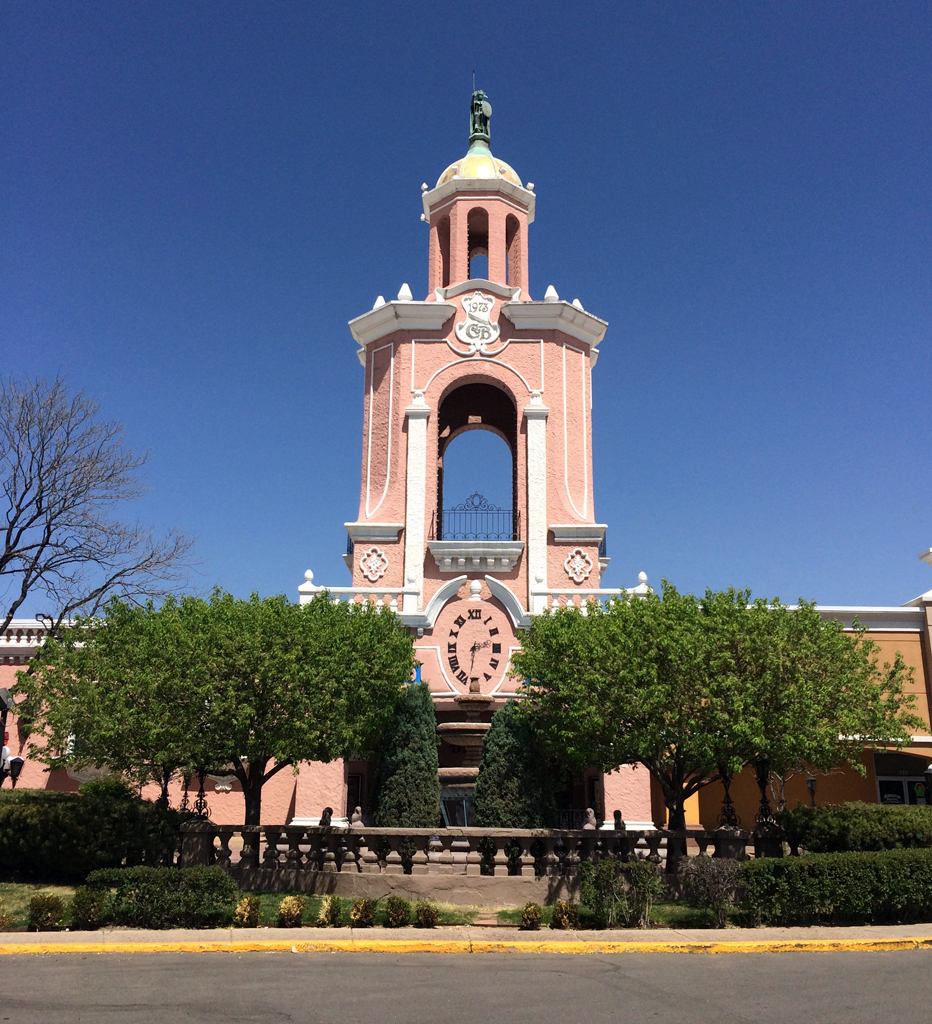 For those of you who have liked or follow my ATFT FB page, you’ll know that last weekend here in my new home state of Colorado came a snowstorm! Snow started falling on Friday evening, covered everything for Saturday, then completely melted away on Sunday. Here’s a shot from Saturday: 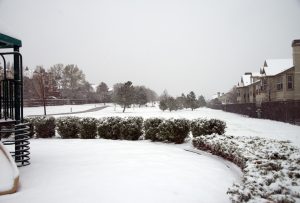 and one from Sunday: 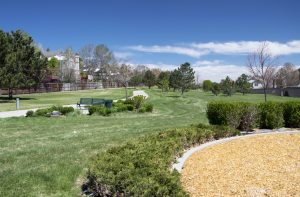 Good thing I’d read about late-spring snowstorms or I’d think I was in some kind of bizzaro world!

Since I’ve lived here, all of three weeks now, I’ve noticed a huge number of Mexican restaurants. I’m in the process of determining which ones are best, of course. And, for Cinco de Mayo this week, I’m bringing you probably the most famous one in Denver – Casa Bonita.

I mentioned in last week’s post that I’d visited Casa Bonita, a place I’d heard about only from a South Park episode – I didn’t know it was real! I learned that it actually existed from reading about Denver before we moved here. During a drive down Colfax in the western part of the city, my husband and I spotted it in a strip-mall parking lot and decided to duck in. I didn’t have my proper camera with me that day, so these photos are all from my iPhone, and I apologize for any crappy quality in advance. 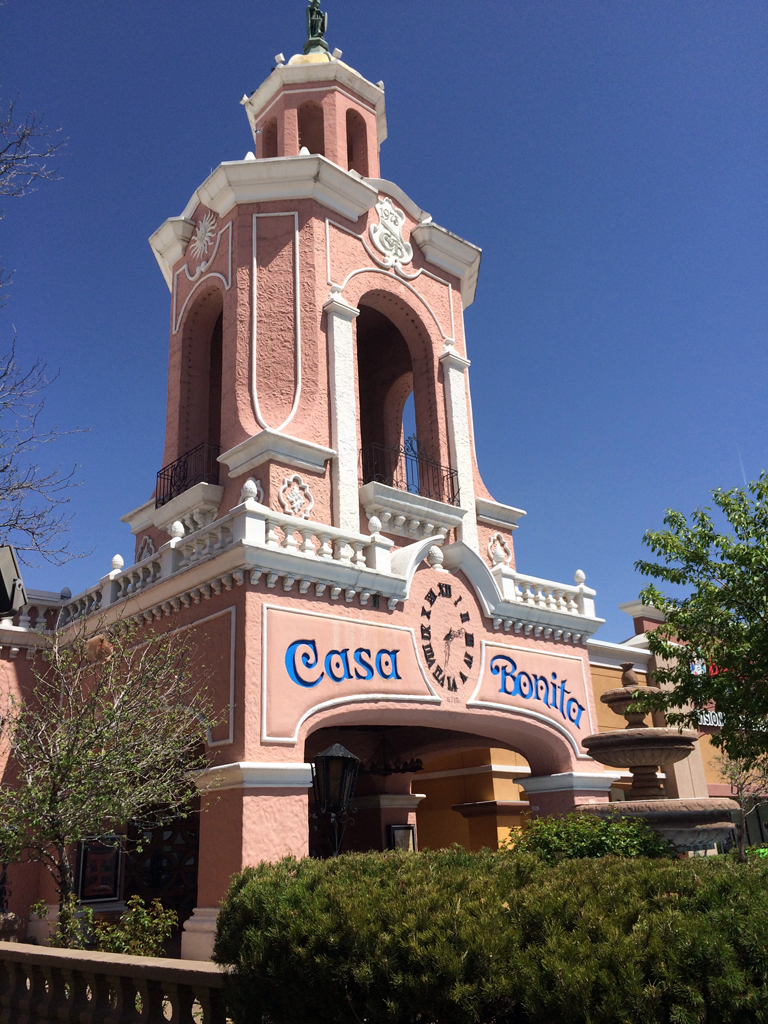 According to its website, Casa Bonita was built in 1974. I’ve heard people say it’s Chuck E. Cheese if Disney had designed it. But it’s not as (excuse me) cheesy as Chuck but not quite as slick as Walt. Somewhere in between. I will say I was surprised that it wasn’t as hokey-looking as I’d expected.

It was relatively deserted when we arrived, which was late afternoon on a Friday, well after lunch and well before dinner. When we first went in, there was no one in sight, though we could hear people talking over a microphone and hear water. We had to follow a seemingly endless series of winding pathways. 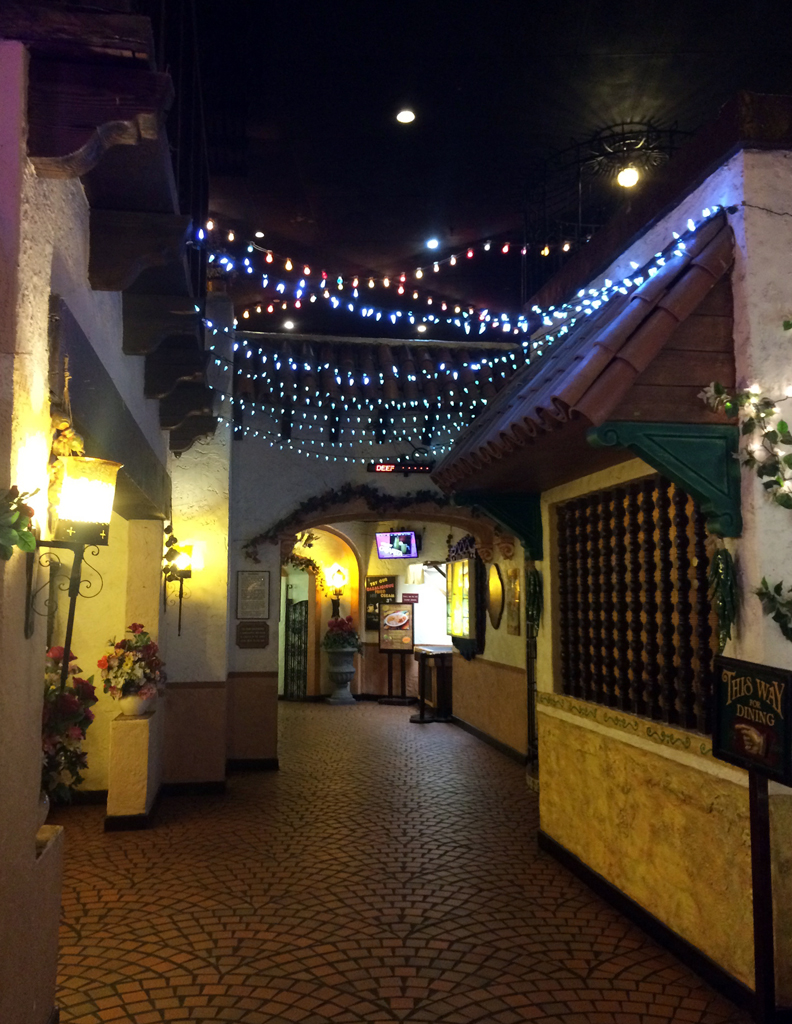 The woman in the next photo, seeing that we were newbies, said to us, “You know people don’t come here for the food, right?” Well, I’d heard that, too! 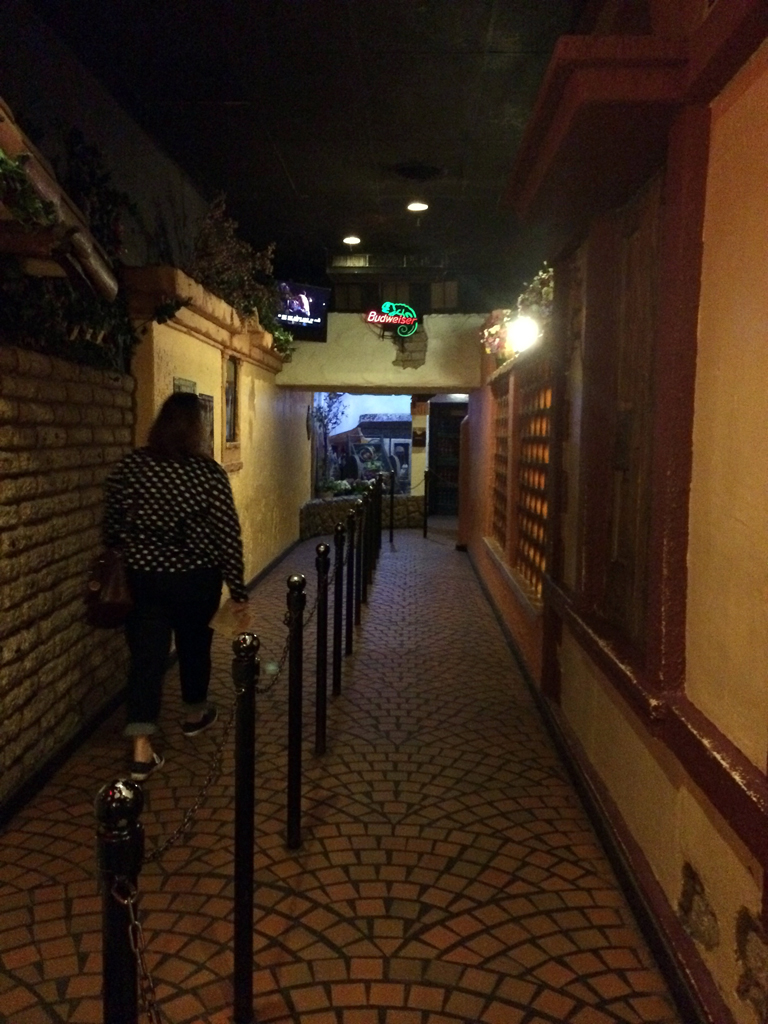 We continued down and around the walkways til we came to the hostess. We quickly learned you have to place your order with her, so we hurriedly ordered pretty much the first thing on the menu, which was a combo special. Then you have to pay her. Everyone age 2 and above has to order a meal – you can’t just stroll around taking pictures! The menu items seem pricey, but it’s all you can eat, so I guess it’s not so bad. 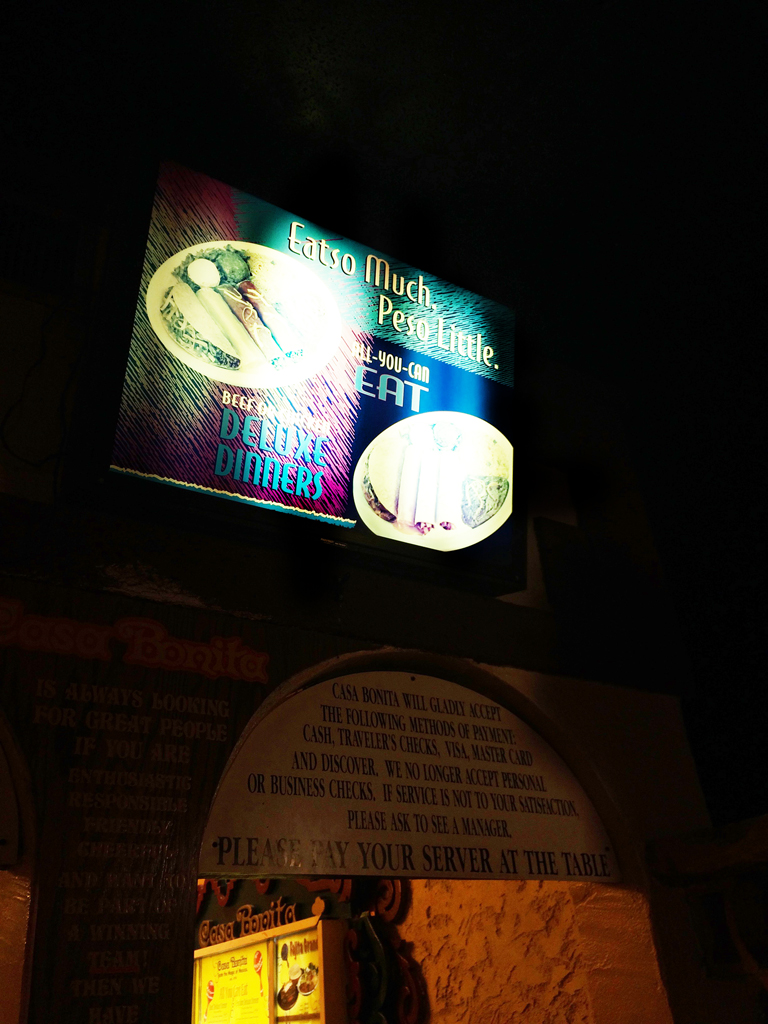 After you get a receipt with your number on it, you walk around some more tiled and decorated pathways. Some of the decorations are really very nice – and clean, too. Sometimes places like this are dusty and unkempt. 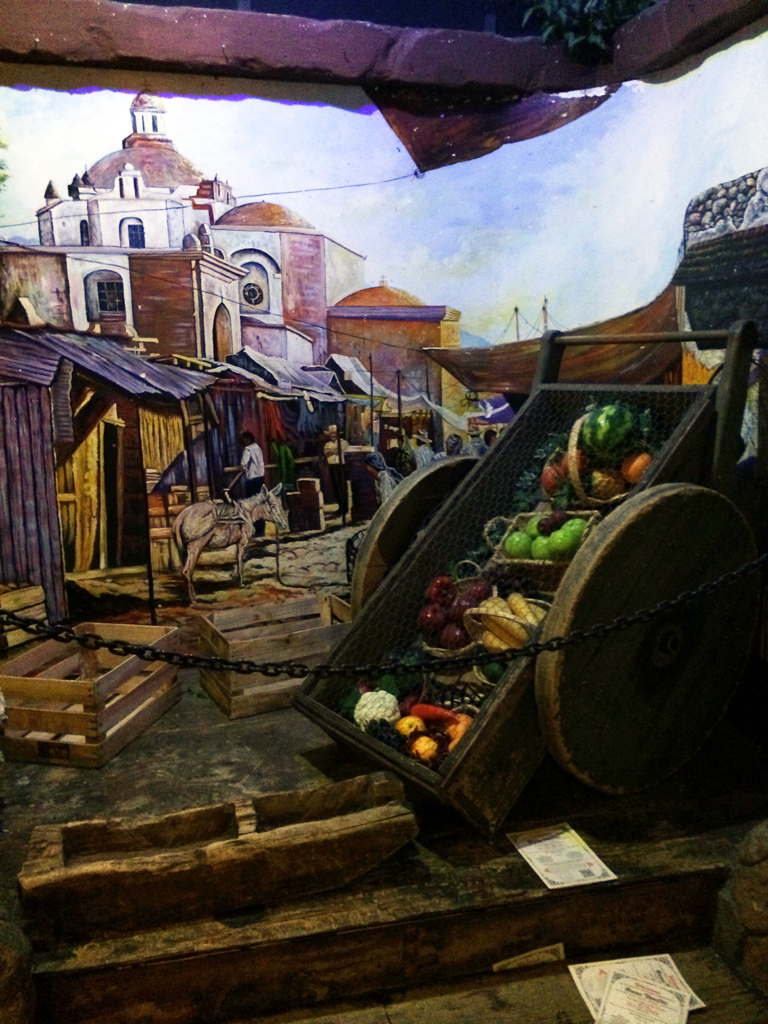 When you round the last bend, you are faced with a large bank of cafeteria trays, one of which you have to take and slide along the ledge to the kitchen area: 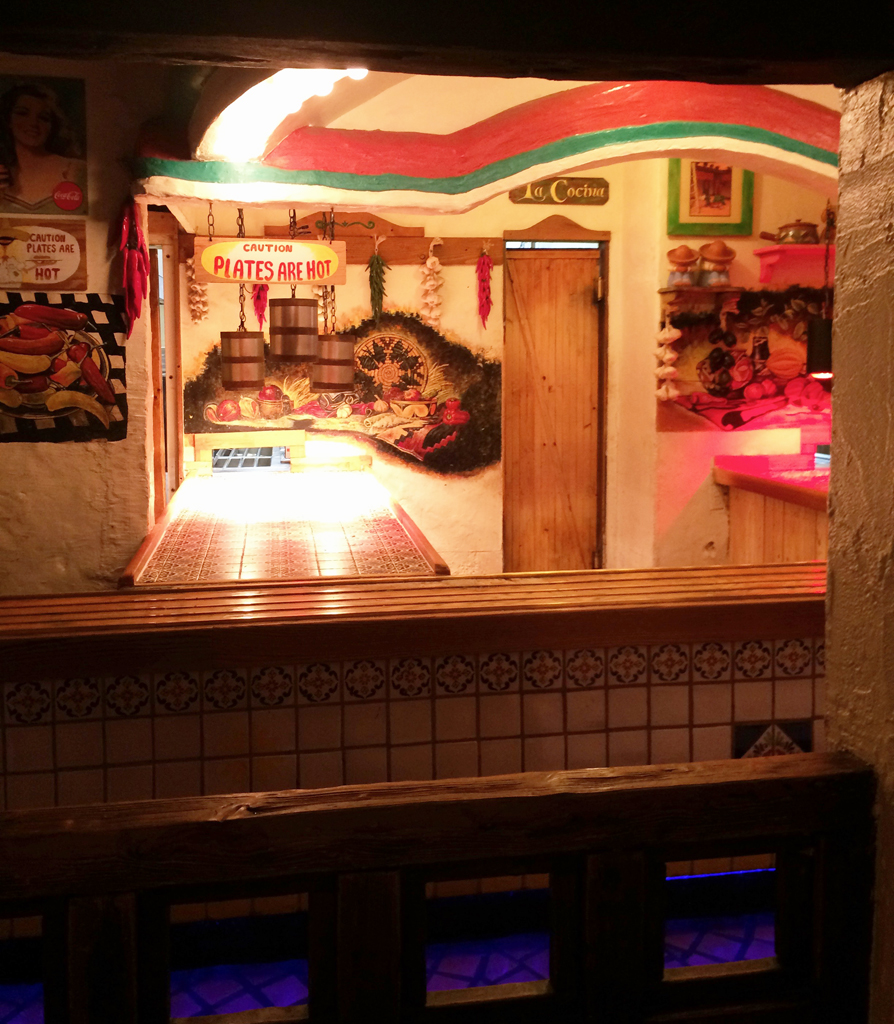 There’s a guy behind the ledge in this kitchen area who looks at your number. Then some disembodied, latex-gloved hands shove plates out the small window in the rear wall. The window appears in the above photo directly below the “Plates are Hot” sign and below the mural painted on that wall. You can see a couple of rows of rectangular hotel pans back there. The guy places your plate on your tray (the plate WAS actually hot) and you continue sliding the tray down the ledge to the end: 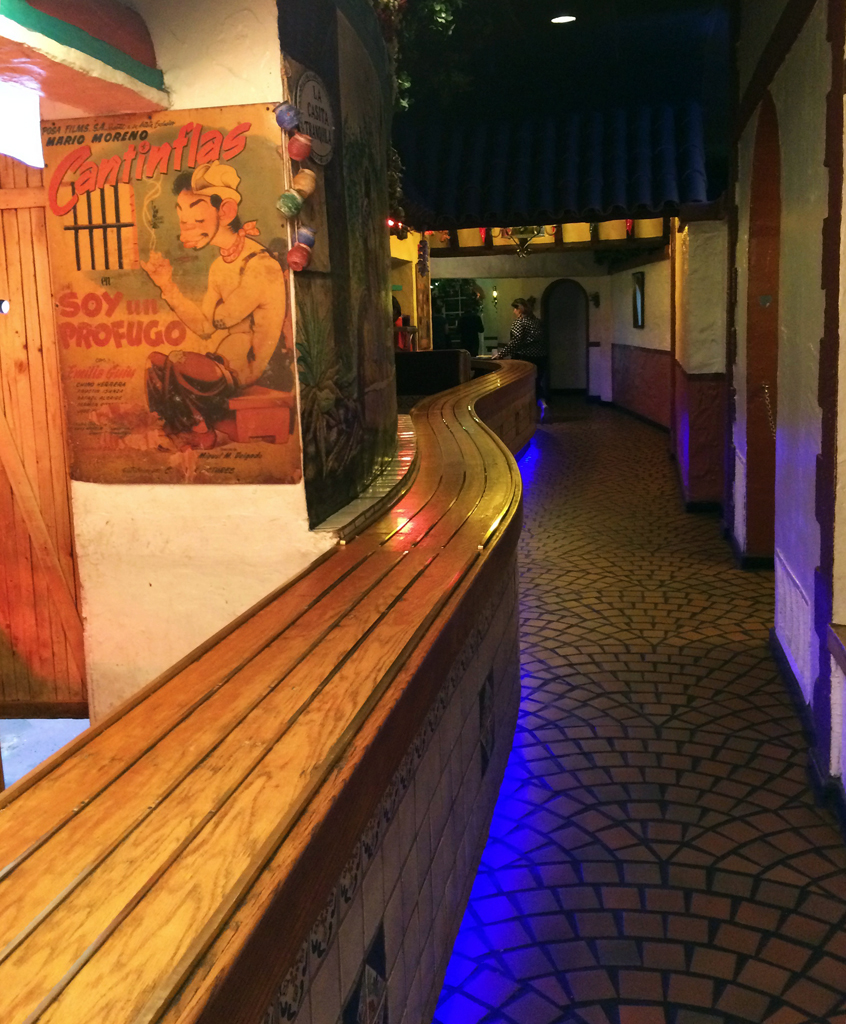 Once you run out of ledge, you have to carry your tray up an incline to a host at a podium who shows you to a table. He offered to carry my try for me, but I’m liberated.

A super-friendly waiter greeted us and helped remove the plates from the trays, etc. I was secretly hoping he’d get lost because the water I’d heard upon entering was from a 30-foot waterfall just across the walkway from our table! One of the famed Casa Bonita “cliff” divers was performing! I vacated my chair as quickly as I could and hurried to the footbridge across the pool from the “cliff” to try to get some photos. Unfortunately, it was his last dive of the performance and my phone wasn’t quite up to the action photo. However, here’s a REALLY blurry shot of him behind the waterfall getting ready to dive and looking absolutely like a South Park cartoon character: 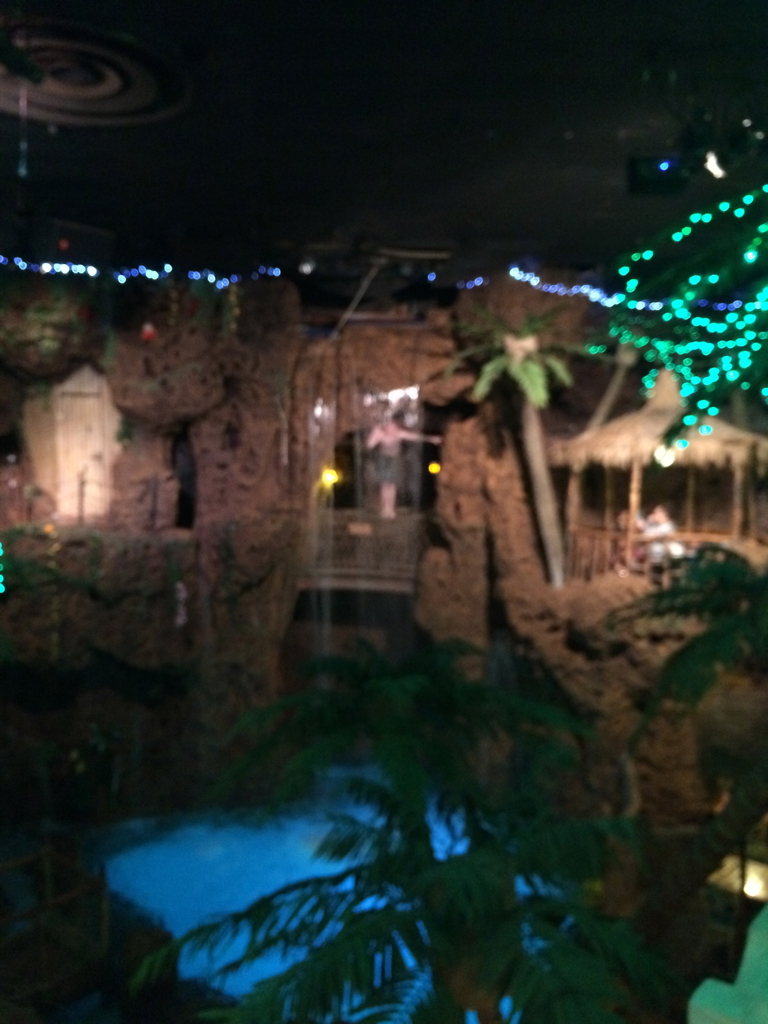 Here’s a shot a second later as he was diving. You can just make out some of him behind the palm tree about to enter the water. At least the water was in focus for this one! 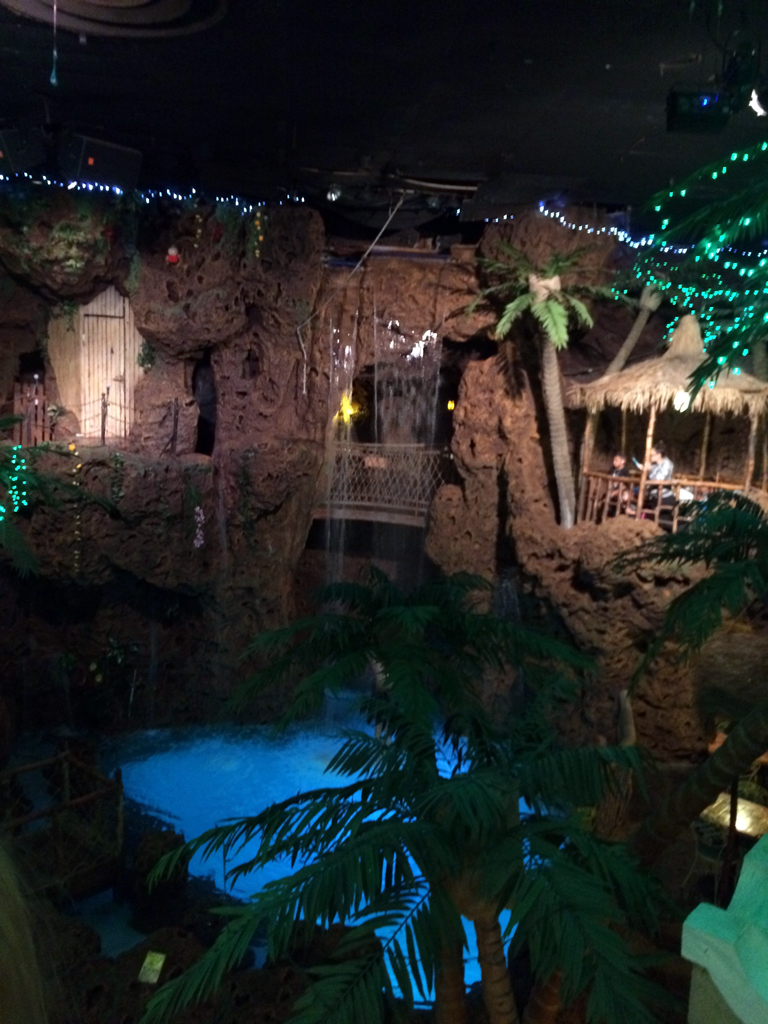 I, and about 15 other children, then vacated the bridge and returned to our seats. The food wasn’t actually terrible. Everything was drowning in white cheese sauce, but I can see where kids would be ok with it. Also, I’m sure other things on the menu would suit me more, but we were caught off guard when we had to order at the hostess stand.

A few minutes after the diving, two “pirates” came out (one had wet hair, hmmmm….) and did THE lamest skit I’ve ever seen on a small stage next to the waterfall. Apparently there is a skit or two there during peak hours involving “dancing monkeys”, which, after some research, I found out is really someone in an ape costume, I think. 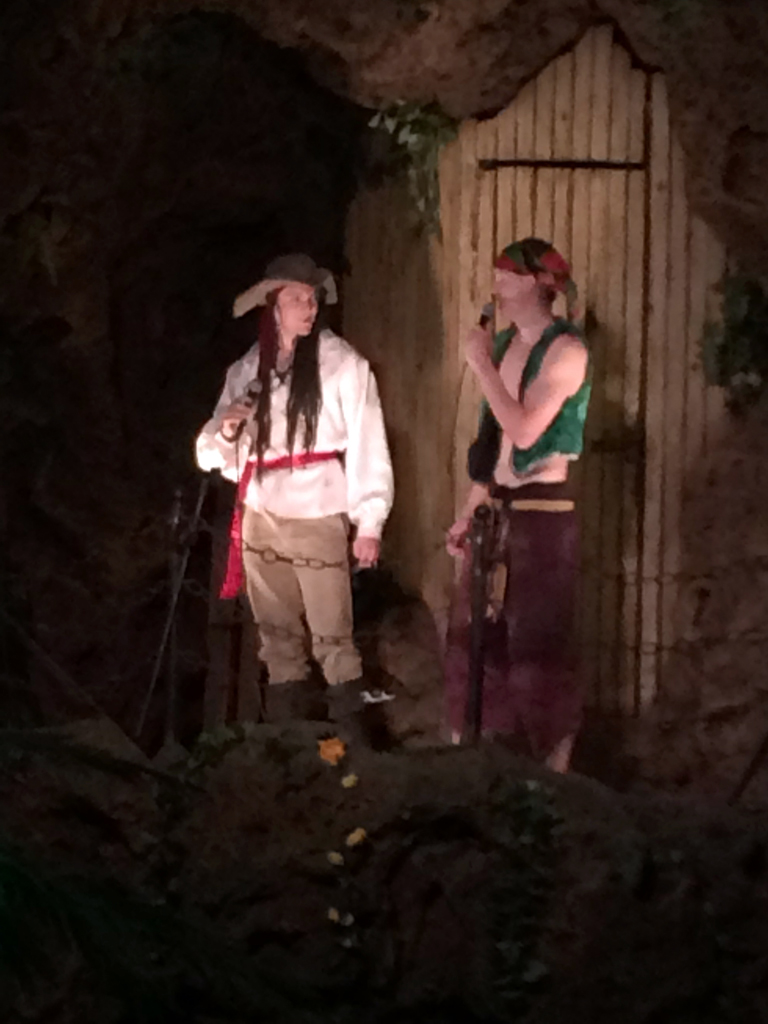 As you can tell, it was rather dark in there, because there are no windows to the outside and only mood lighting and strings of dim lightbulbs. However, everywhere you turn is a different type of scene.

After we finished our meal, the waiter asked if we’d like some sopaipillas. “Yes, please,” just like Cartman: 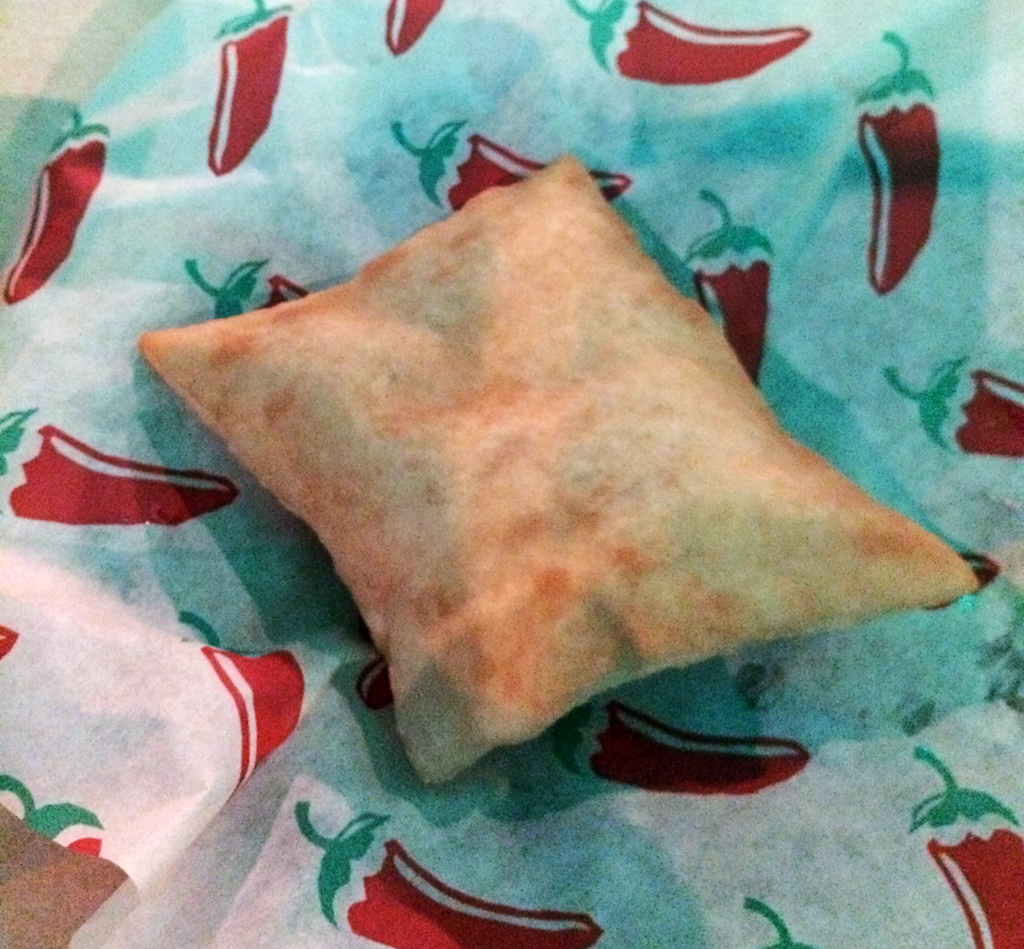 Sopaipillas are a fried-dough dessert, kind of like a beignet. These weren’t especially tasty, but they weren’t bad. You drizzle honey on them and make a mess while you eat them, accidentally getting honey on your iPhone cover. I’ve since had some really good sopaipillas at a Mexican place down the street from our apartment. When you come to visit, I’ll take you there, too!

Anyway, the waiter told us to walk around to our heart’s content after we paid the bill. BTW, the bill had a Casa Bonita sticker on the cover, and I’ve seen several cars on the road around here with the same sticker: 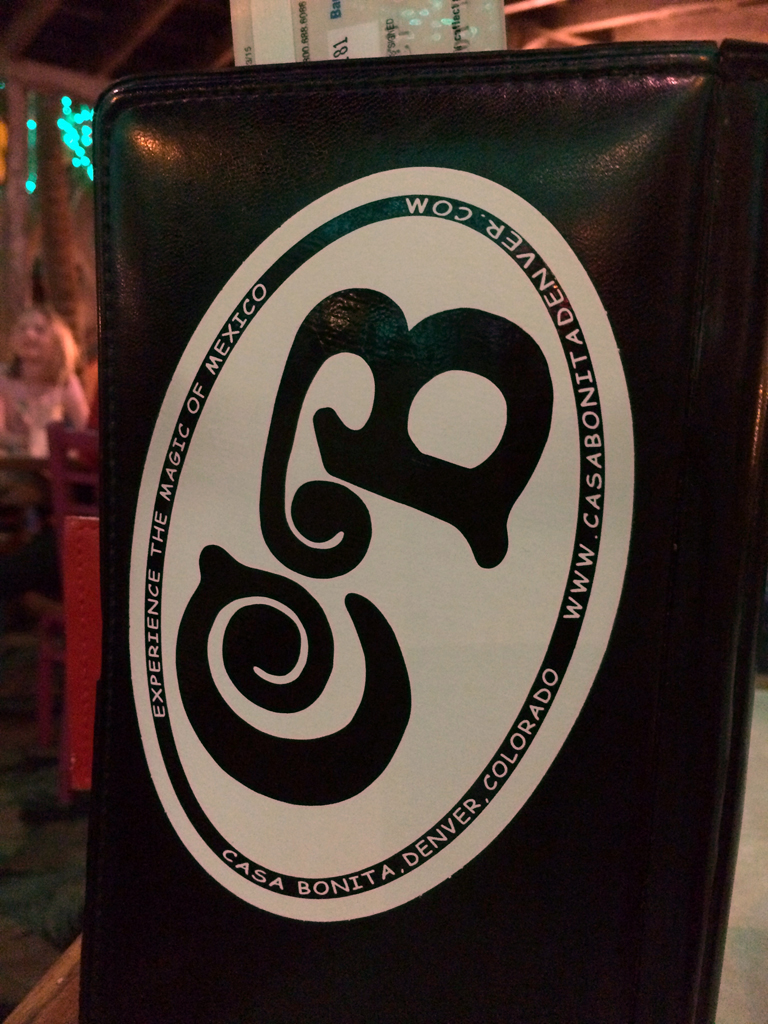 So we walked around and I took these pix: 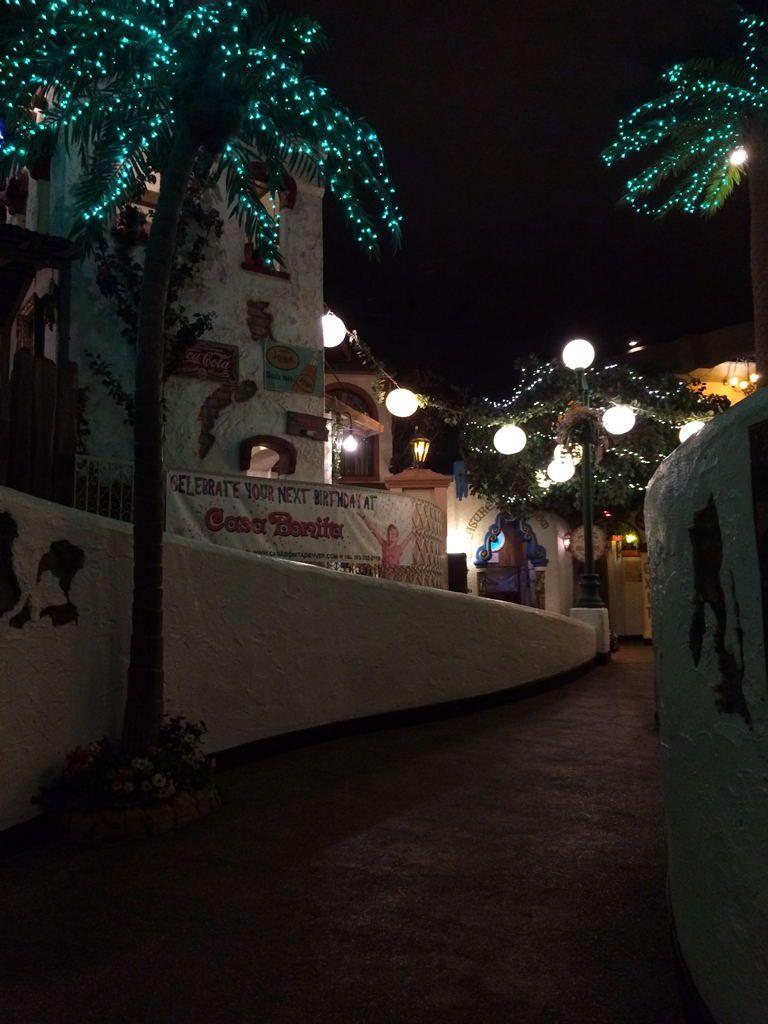 There was plenty to see, being as how the place is 52,000 square feet! There are seats for over 1,000 people! Most of it was empty, much to my delight. I can get better photos for you without pesky people in the way! 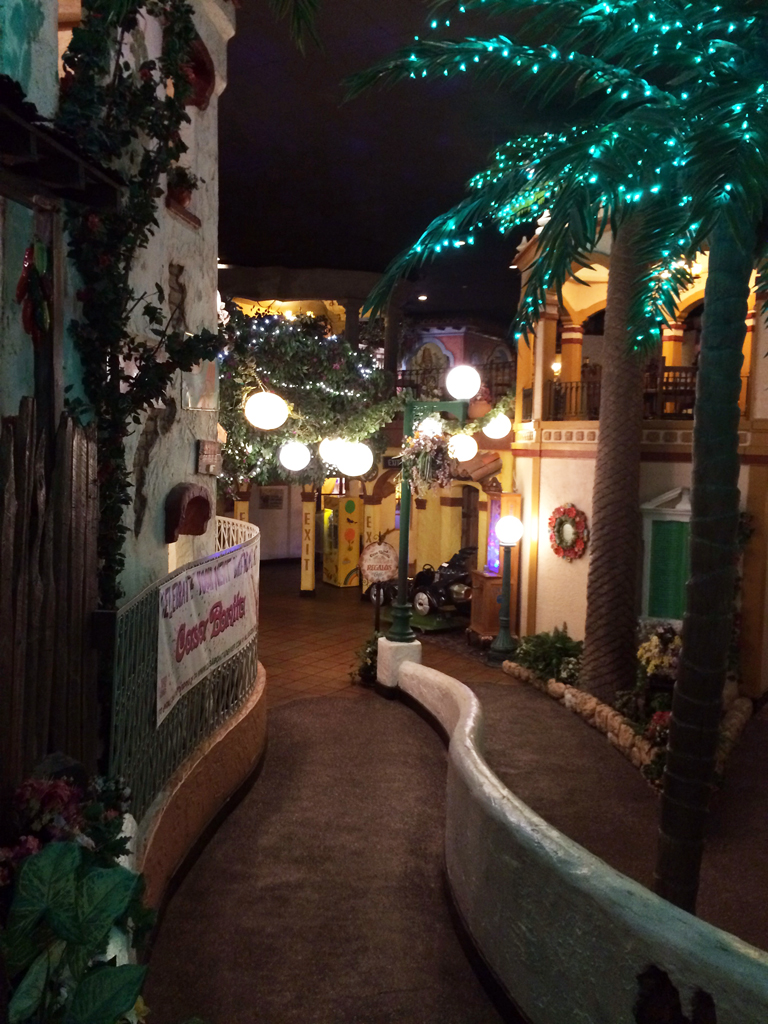 You can walk behind the waterfall and there are dining tables back there, too. However, you’re not allowed to dive into the 14-foot pool or throw anything in there, either. 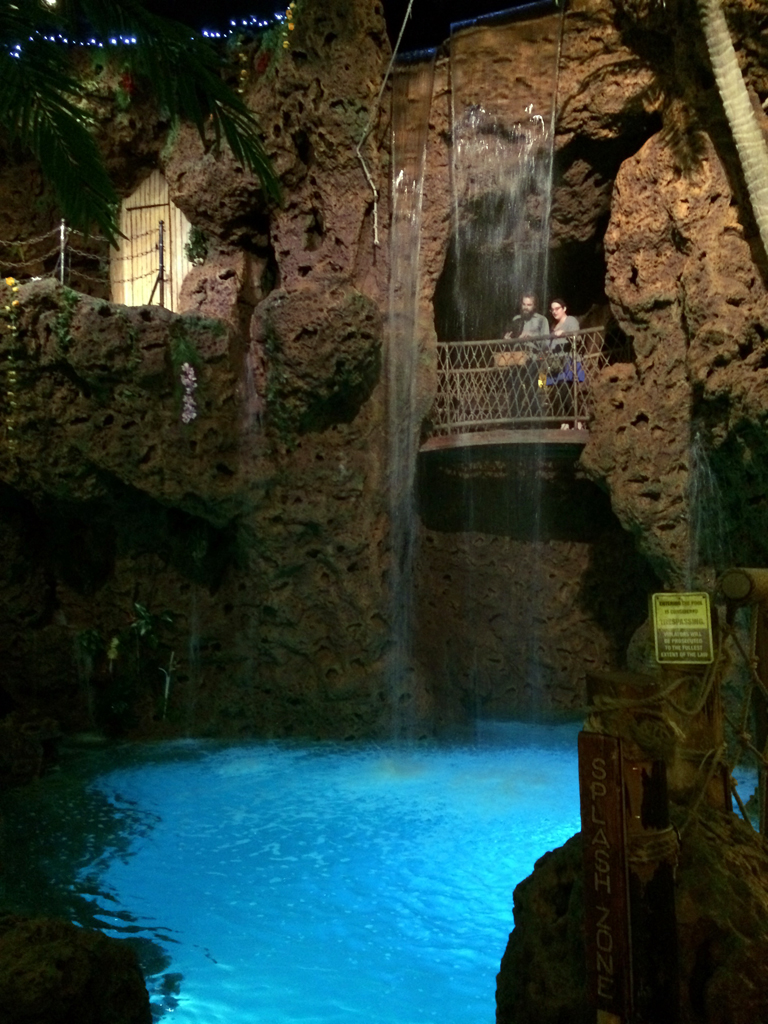 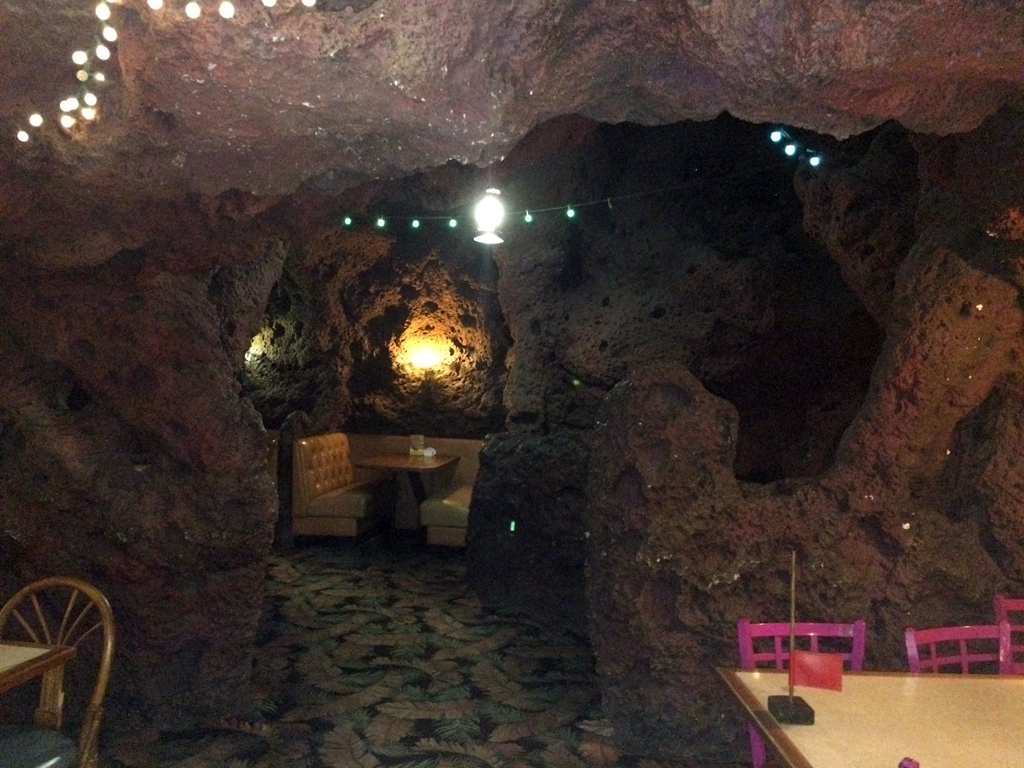 Black Bart’s Hideout is a mini haunted-house type thing. We started through it, but as the passage narrowed, I bailed because it got real claustrophobic in there! My husband heroically completed the course, though. For that matter, Black Bart isn’t too smart advertising his hideout like that, amiright? 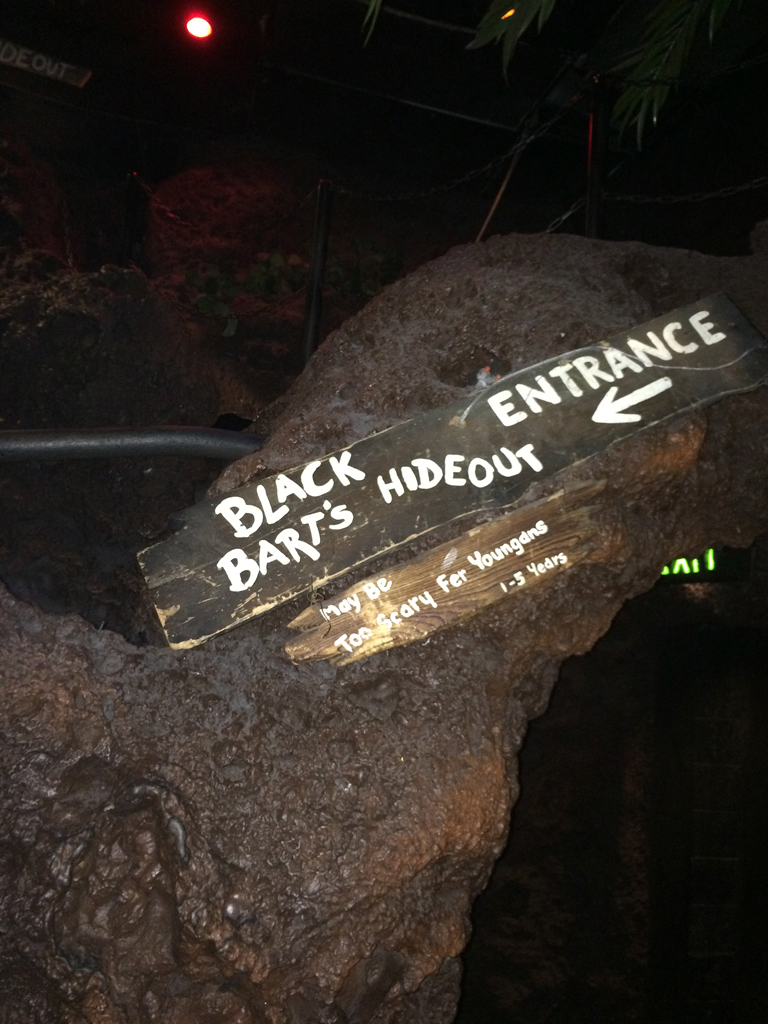 There are at least three levels in Casa Bonita, and we saw some of each. Like the Mine Dining area: 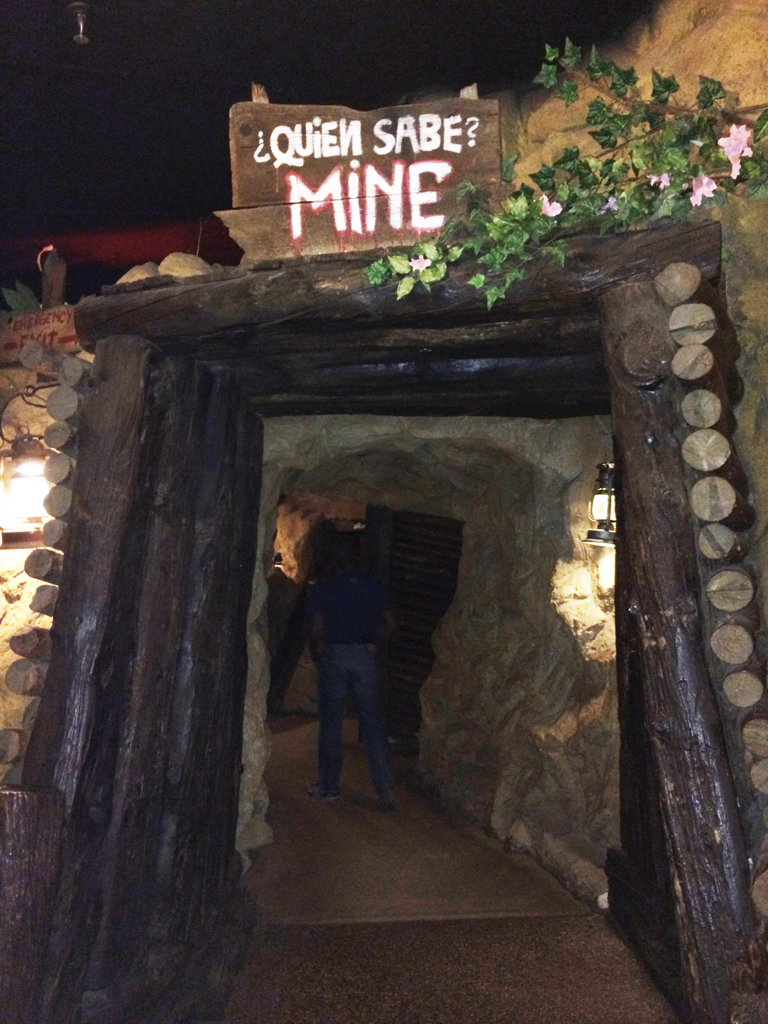 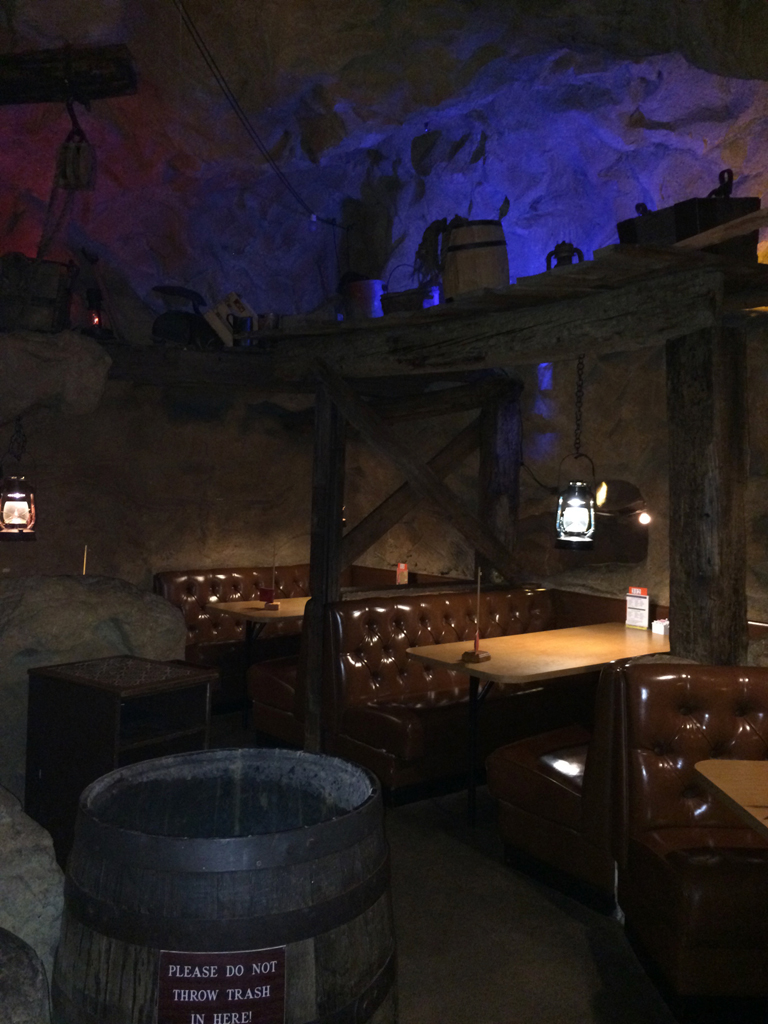 On this stage is where the mariachi band performs. Since it was dead quiet, my husband decided to liven the place up with his comedic stylings: 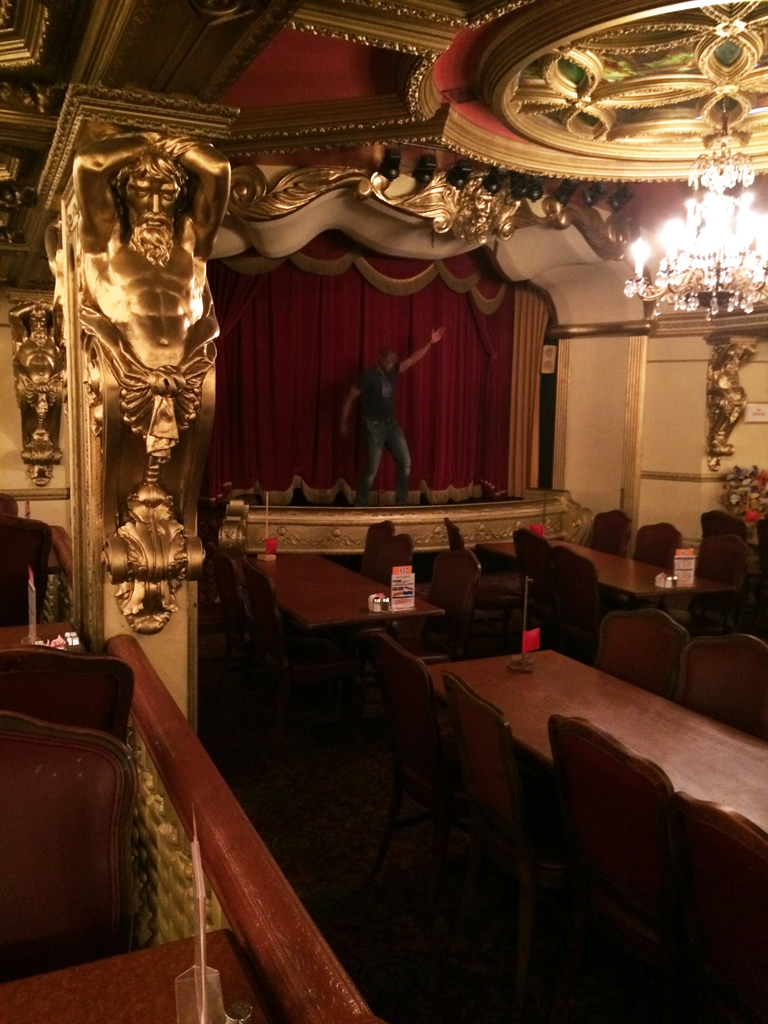 We saw an upper arcade: 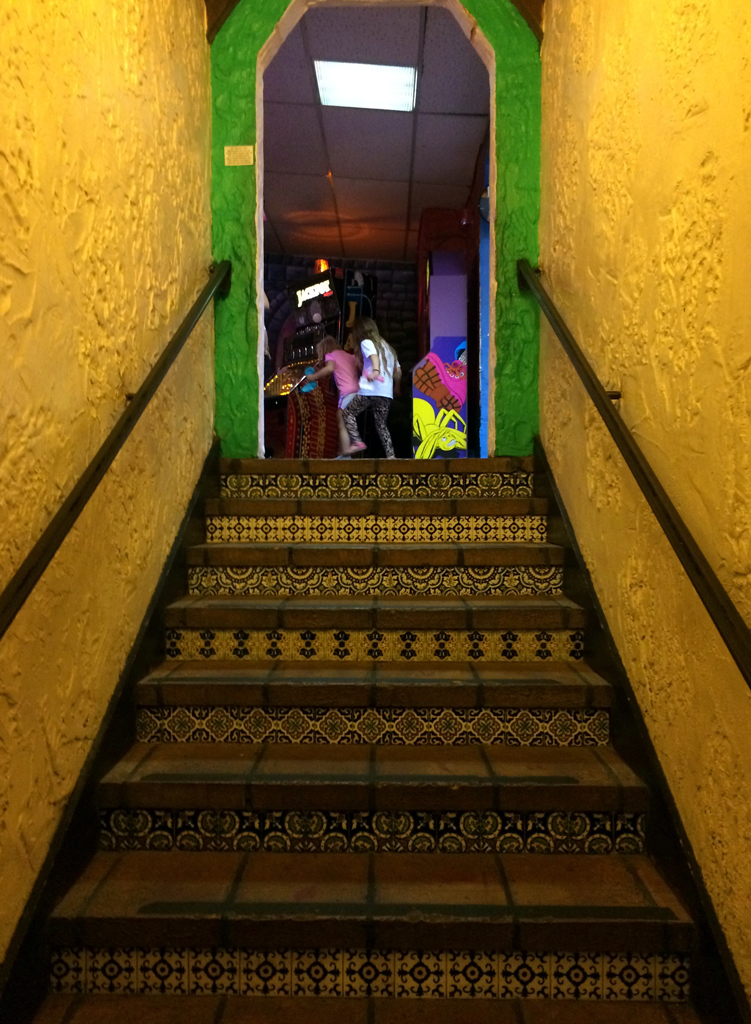 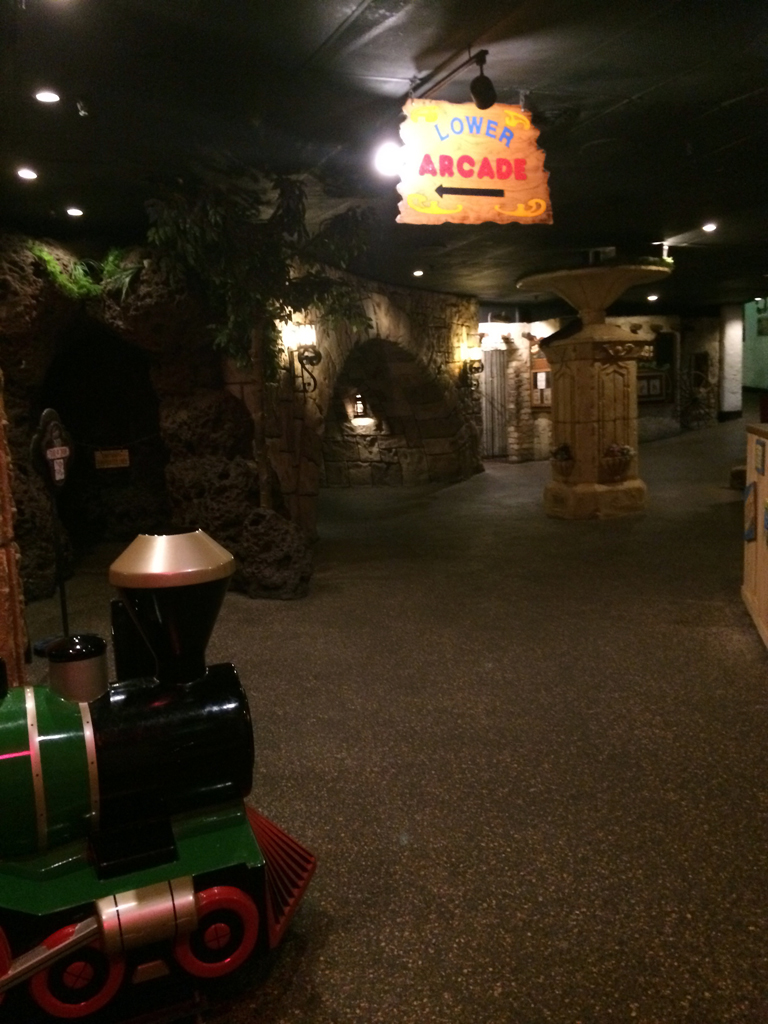 Plus a jail! You can dress up and get your picture taken in jail. Unfortunately, even though we had cash, the jail was closed that day! 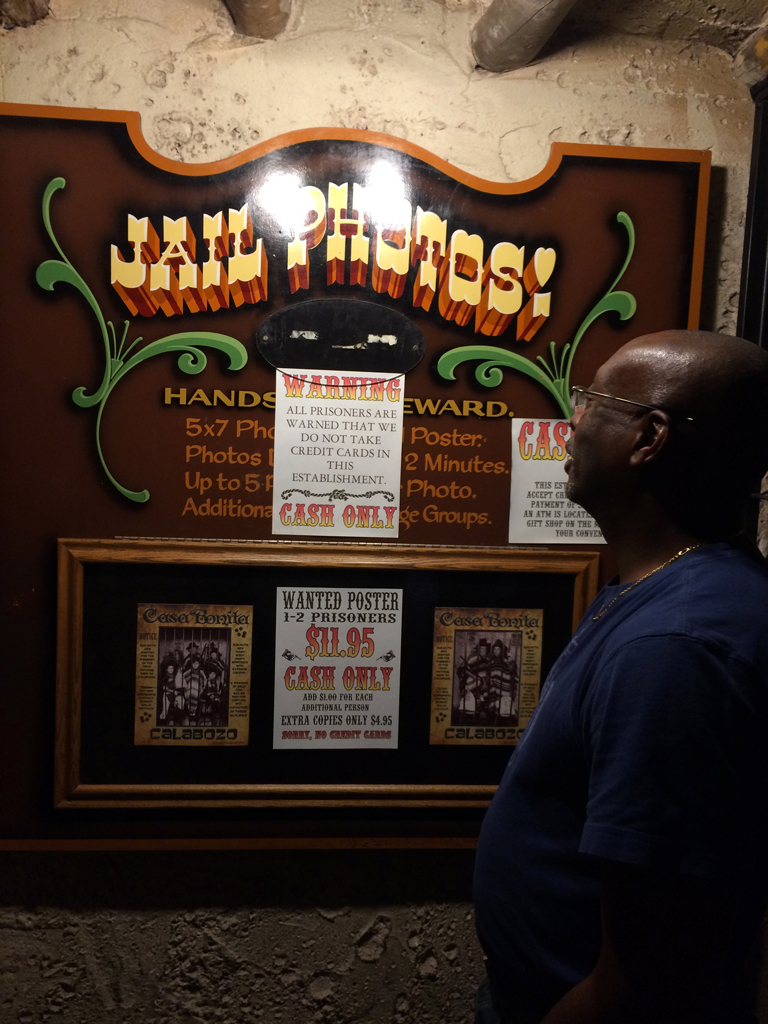 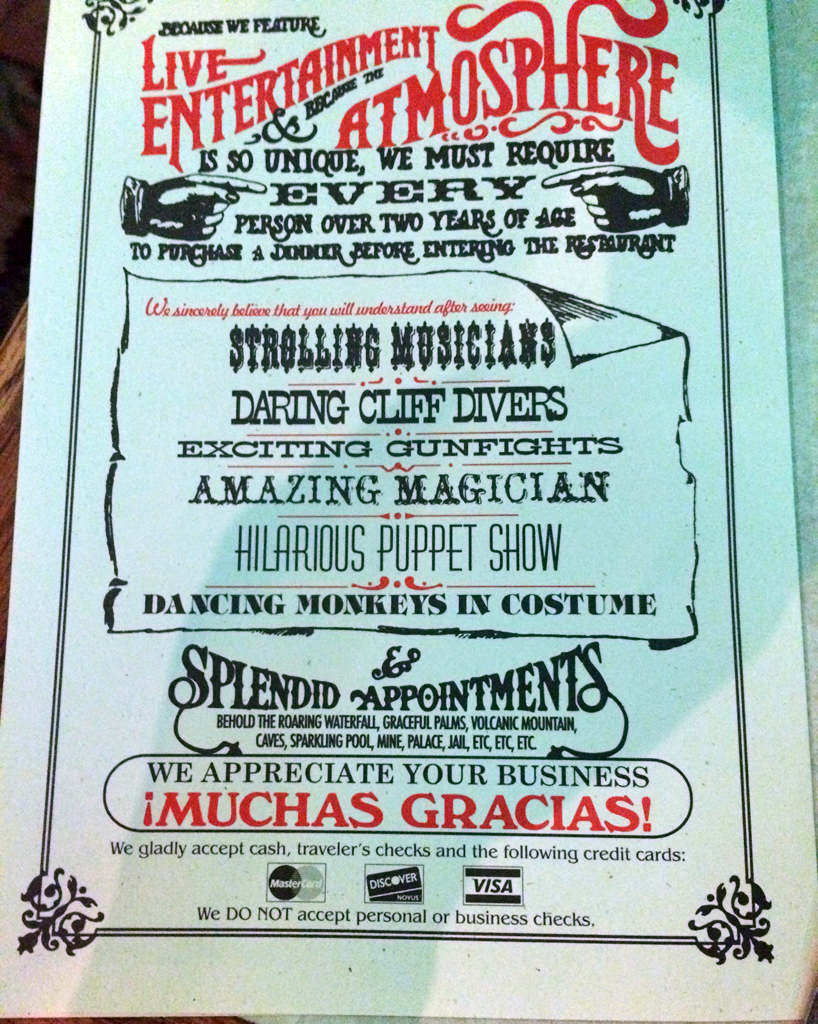 While we didn’t get to see any strolling musicians, exciting gunfights, amazing magicians or hilarious puppet shows, I feel I got the full sense of the place. I hope you did, too. I can imagine it at capacity on a weekend when the kids are swarming the place. Here’s a decent YouTube video that’s pretty accurate. When you visit, I’ll take you there personally! And I’ll bring my good camera this time. 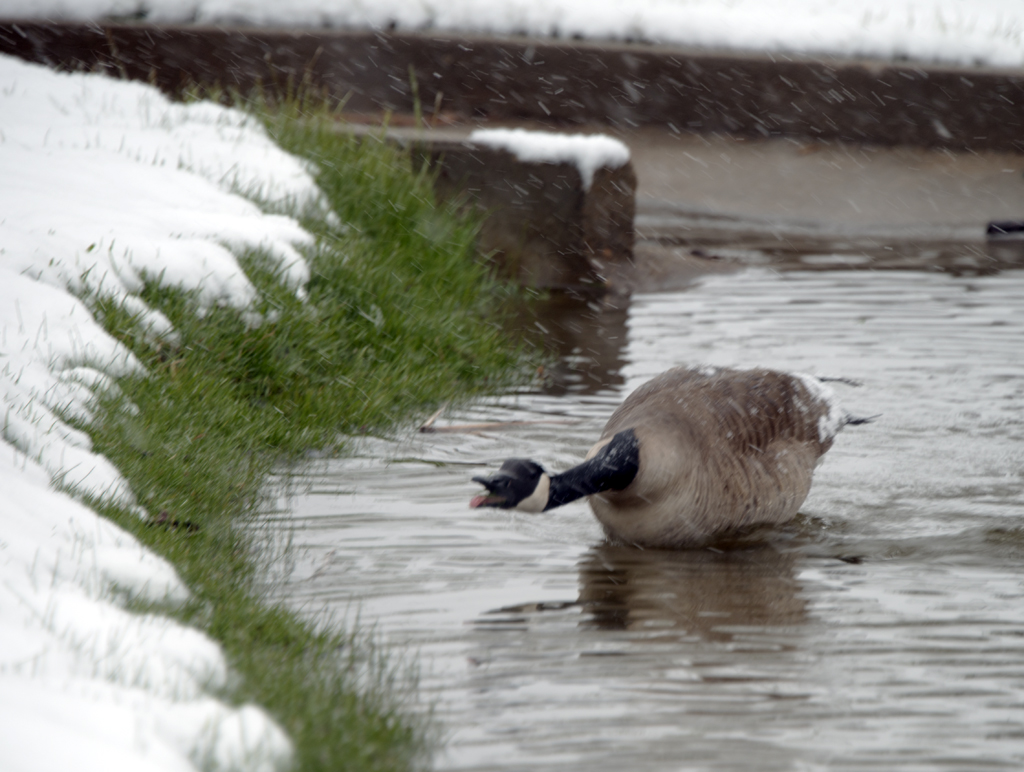