On a glorious Memorial Day weekend this year, my husband and I took a planned-last-minute trip to Glenwood Springs, high in the Rocky Mountains. New to the area, of course, this was our first foray into the Rockies via Interstate 70. What a weekend! In this post I bring you photos and details about the drive itself. Look for posts about Glenwood Springs, Bachelor Gulch, the Georgetown Loop historic train and several other roadside attractions in future posts.

On Friday afternoon we assembled our bags into the car and headed out. I-70 in Denver is somewhat of a snarl, especially on a holiday Friday afternoon, but after we were out of the city and climbing, traffic thinned out and was fairly pleasant. We were rewarded for our troubles with breathtaking views along the way!

It’s so amazing to see the change in terrain from one mountain to the next: 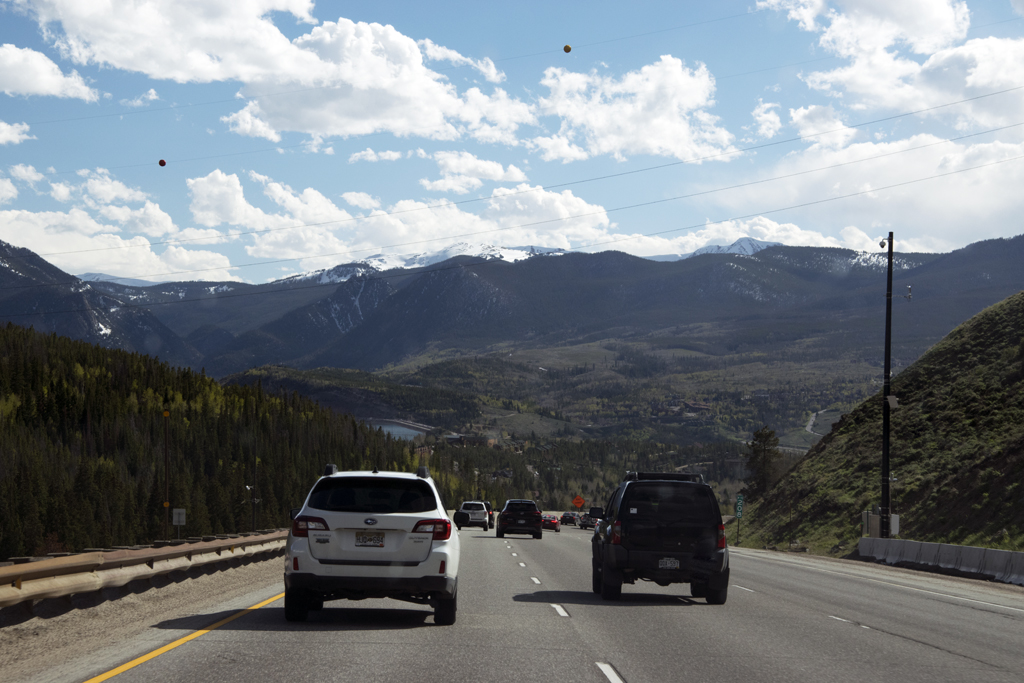 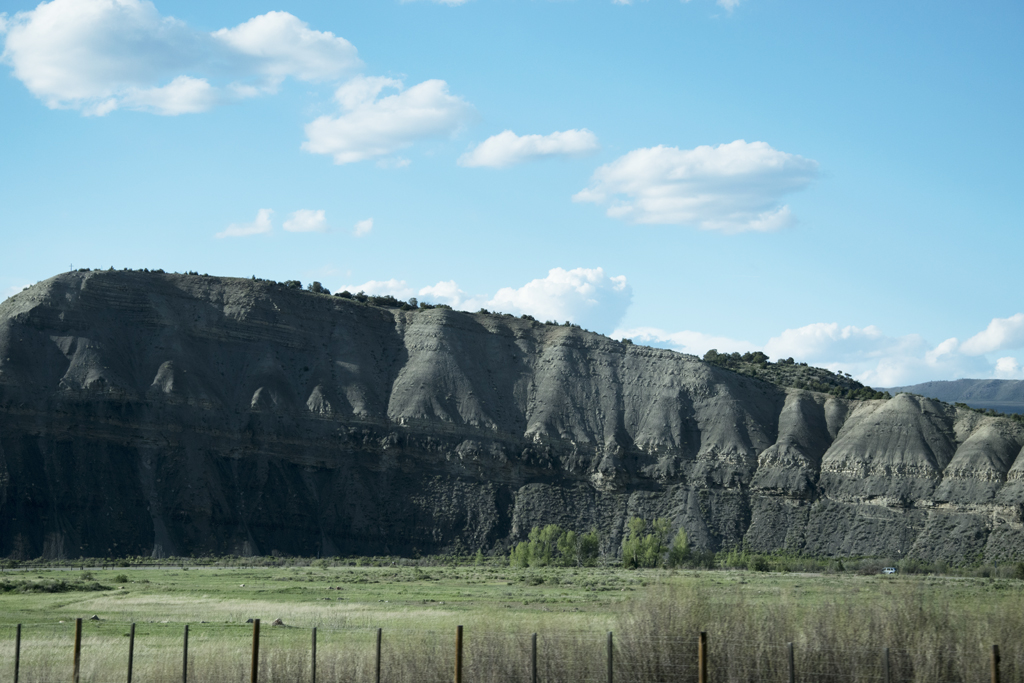 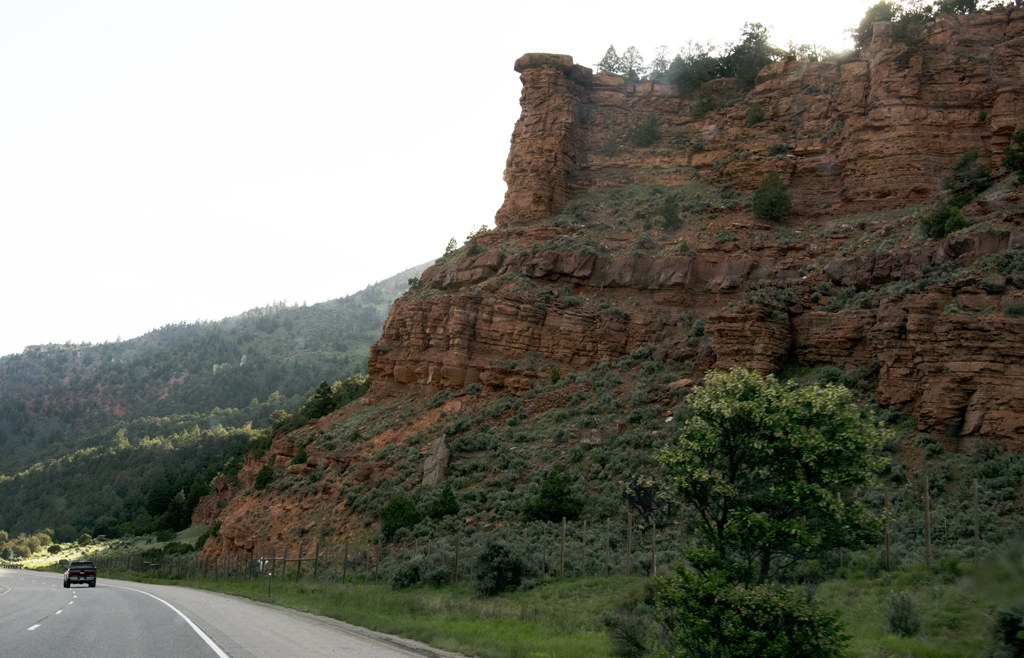 The rock strata pointing skyward reminded me of the mega-forces that raised these mountains millions of years ago: 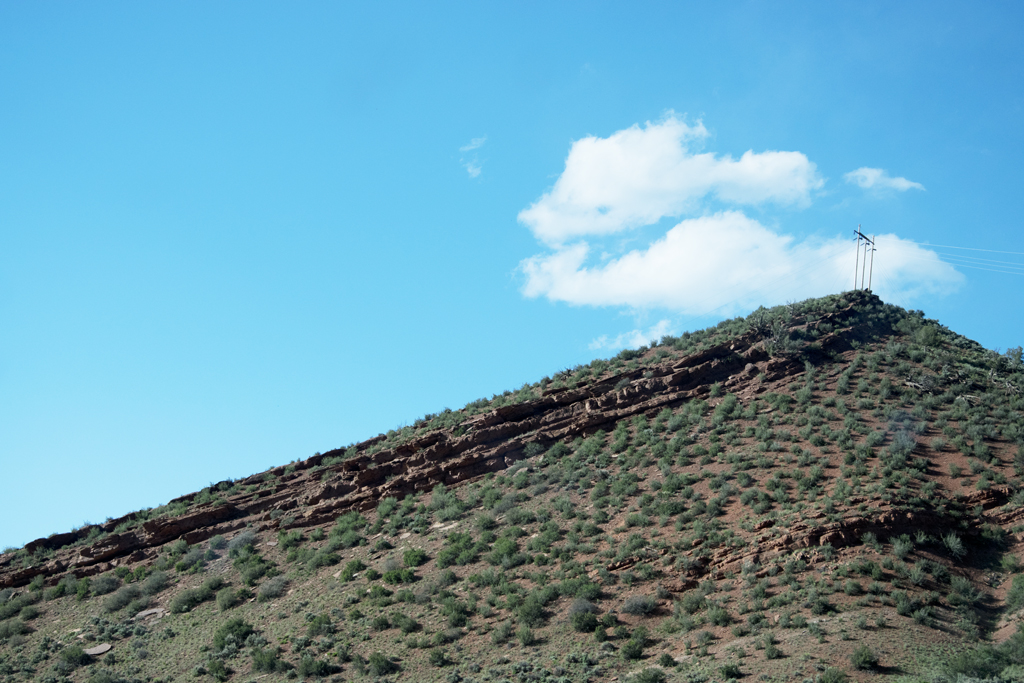 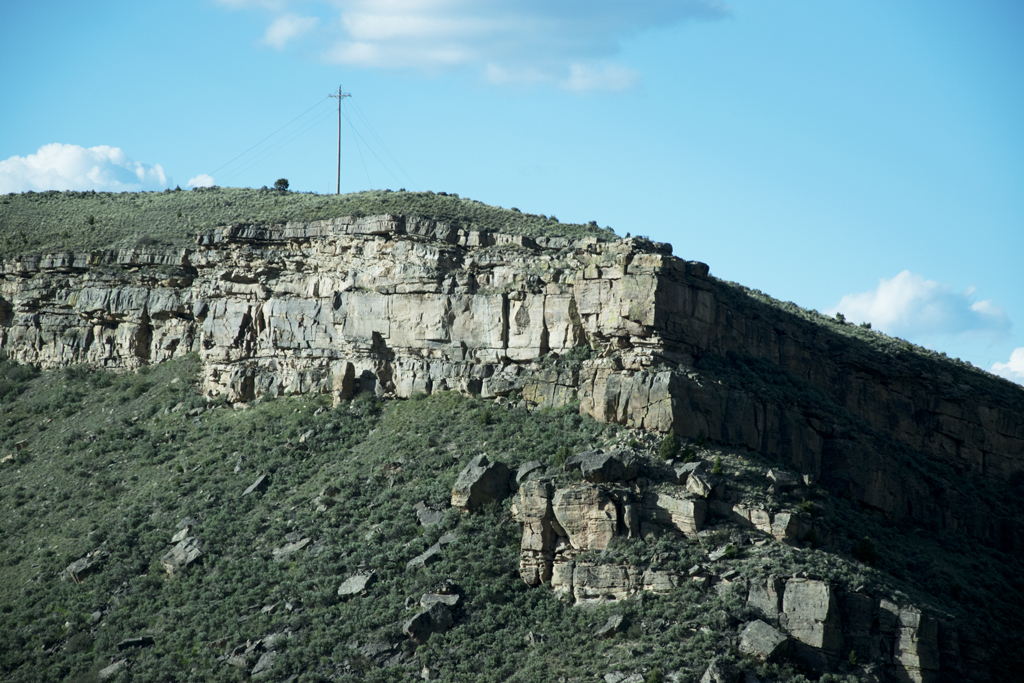 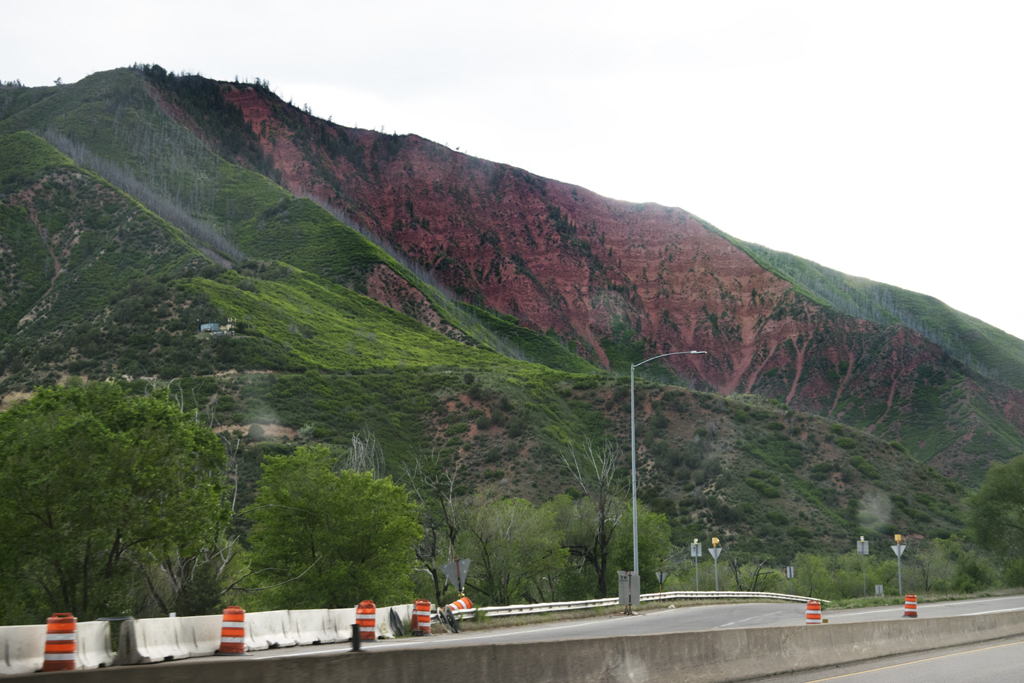 And, of course, higher up we began to see snow: 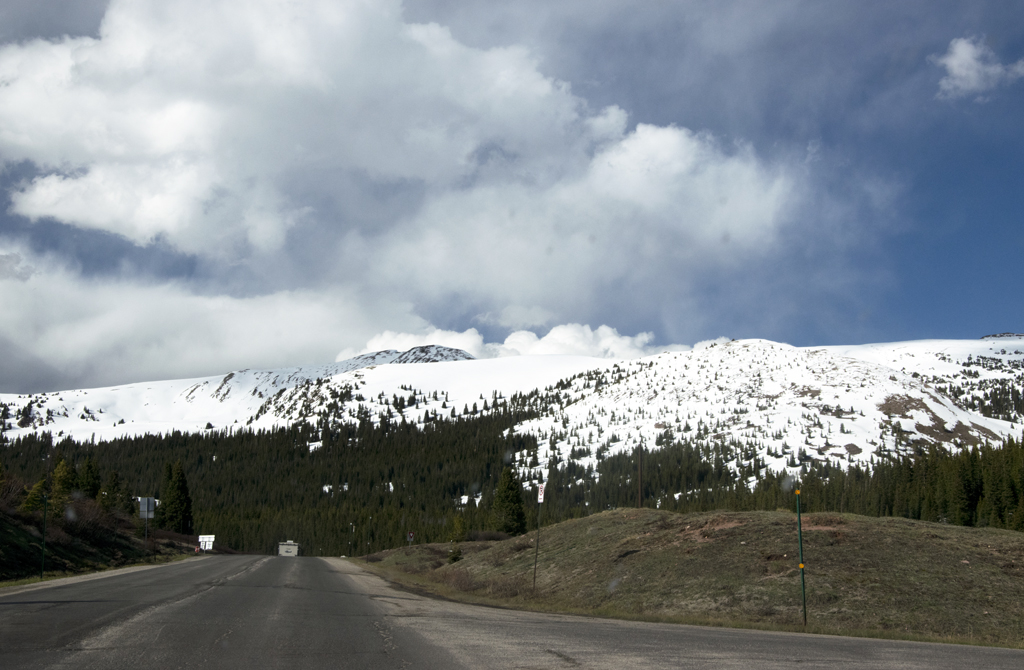 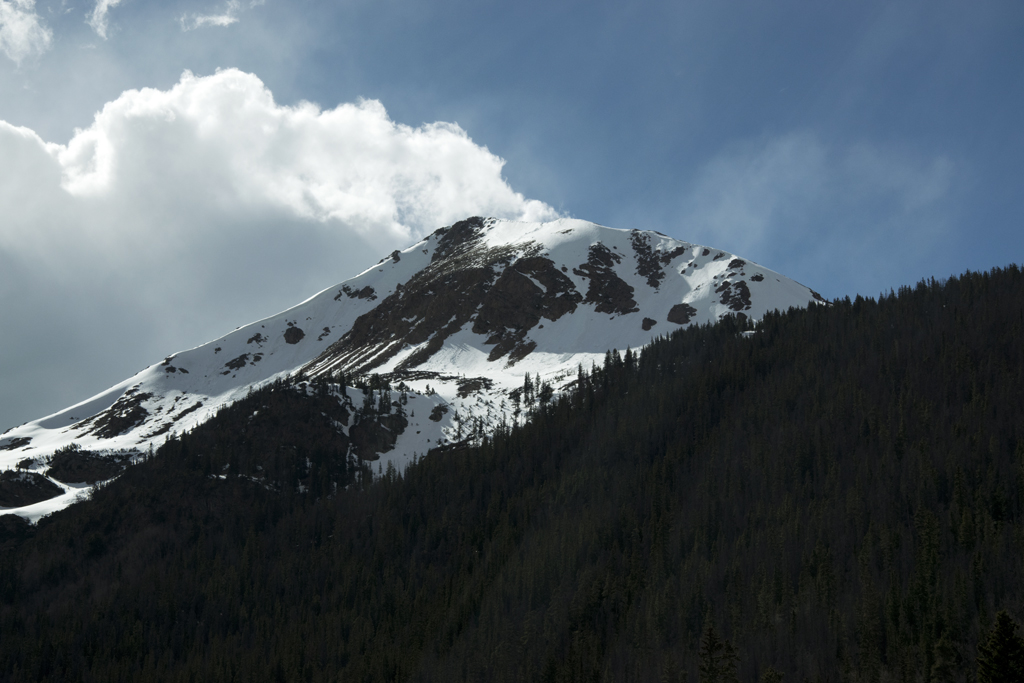 Ski slopes that were busy a few weeks ago looked kind of sad and melty that day: 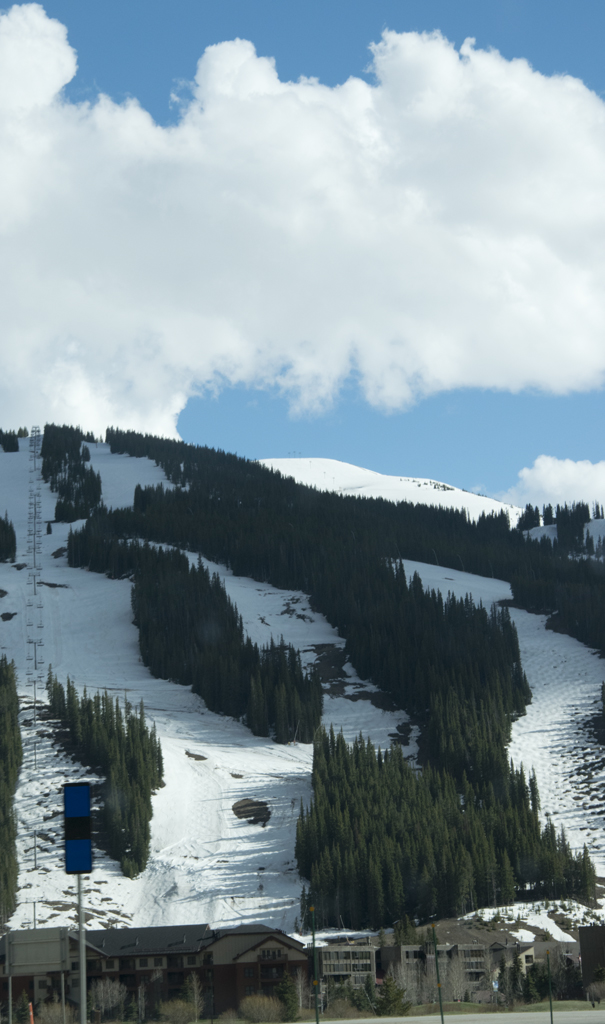 There is no shortage of road signs along the route, including signs that have deer and elk silhouettes – ELK! 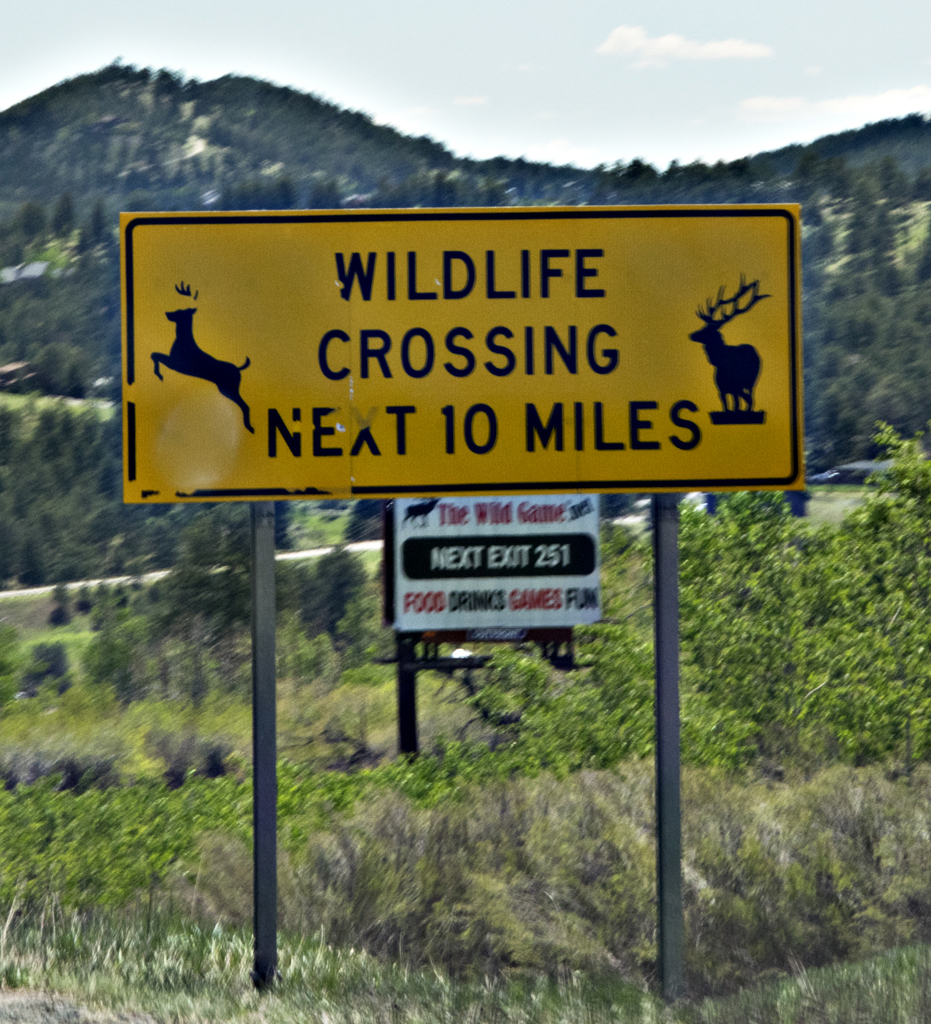 In fact, I read that I-70 was constructed with fences that prevent wildlife from crossing the highway and instead guide them toward several underpasses designed specifically for animals. Some of the underpasses were built along known migration routes.

To my non-mountain-dweller’s eye, the chain-up stations were fascinating. At a certain elevation, the DOT requires all vehicles to have chains on the wheels for traction in winter weather. So they set up pull-offs where you can put the chains on: 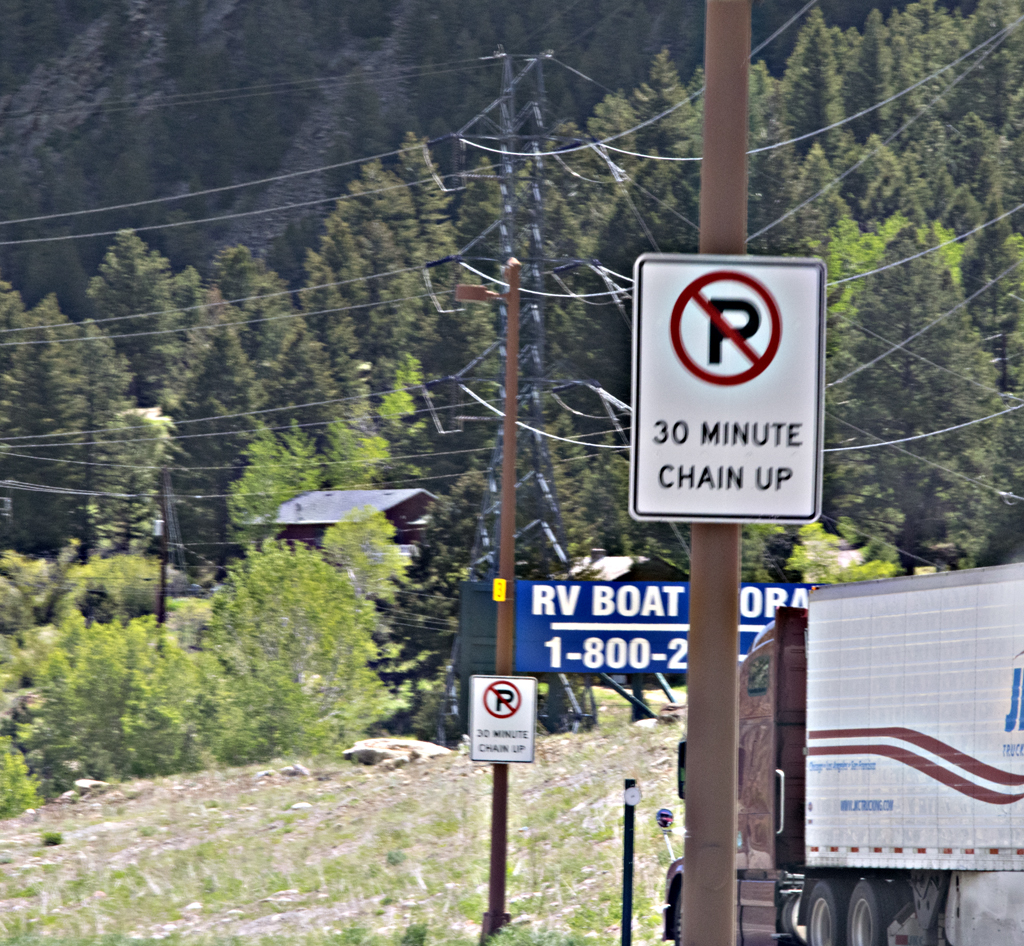 And it’s apparently no fun for truckers up there, either. 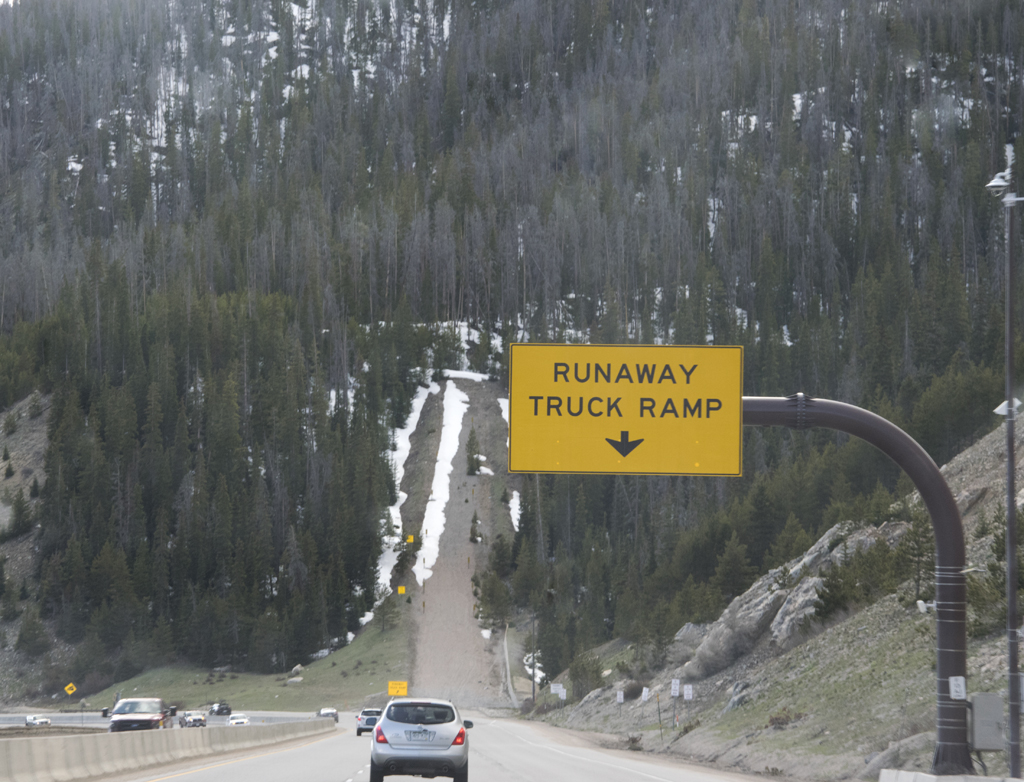 The longest and highest (11,158 feet) vehicular tunnel of the US interstate system, the Eisenhower Tunnel, is along the I-70 route: 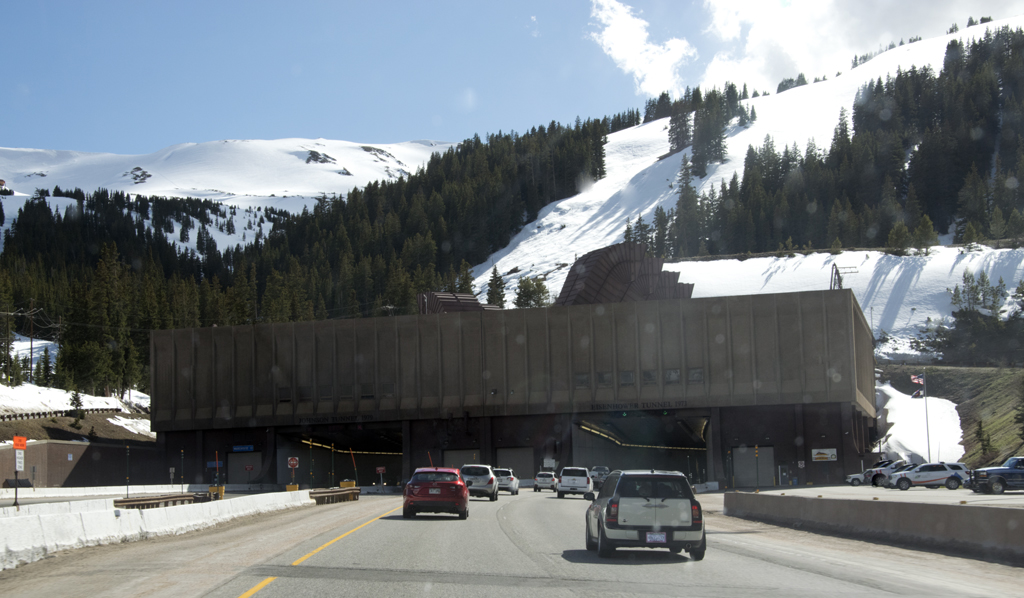 I encourage you to look up some information on this marvel of engineering, if you’re into that sort of thing. It’s truly a feat of modern muscle! It takes traffic through the mountain and across the Continental Divide, which is the point at which the watershed changes from east to west. In other words, before we went into the tunnel, rain water and snow melt was draining east toward the Mississippi River. When we came out the other side, water had started draining west toward the Pacific Ocean. We were inside a Rocky!

Here’s a sample of the signage inside the tunnel. Ok, I had nothing else to photograph; the tunnel is 1.7 miles long! 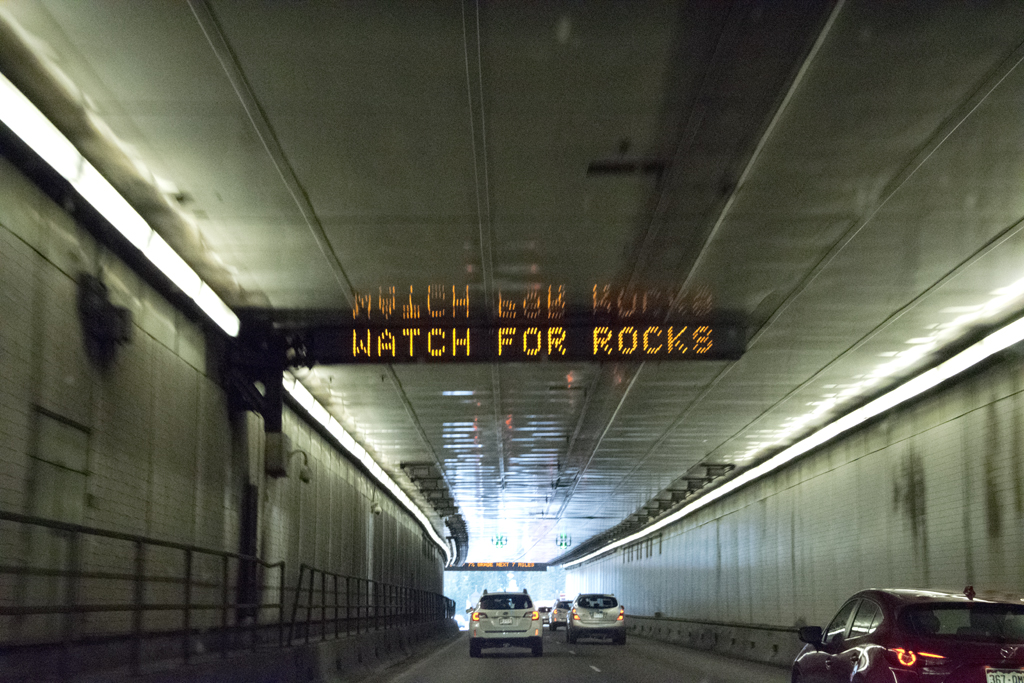 Part of I-70 is built along the Colorado River. In Glenwood Pass, the east and west lanes are on separate levels, with the river in the middle of the gorge and a railroad on the other side:

Over the weekend there was some snowfall in the highest elevations. We weren’t in any of it, just some rain, but we saw evidence of the snowfall on the way back. It seemed to have rejuvenated the ski slopes, though we didn’t see any skiers. 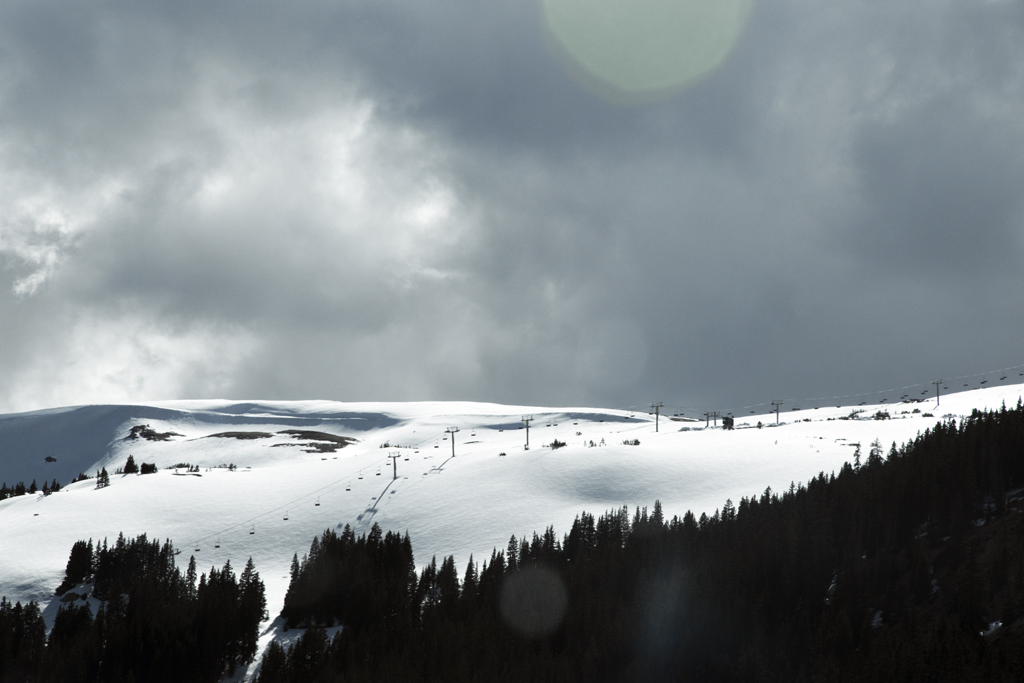 I love the way the trees give scale to the vastness of the mountain: 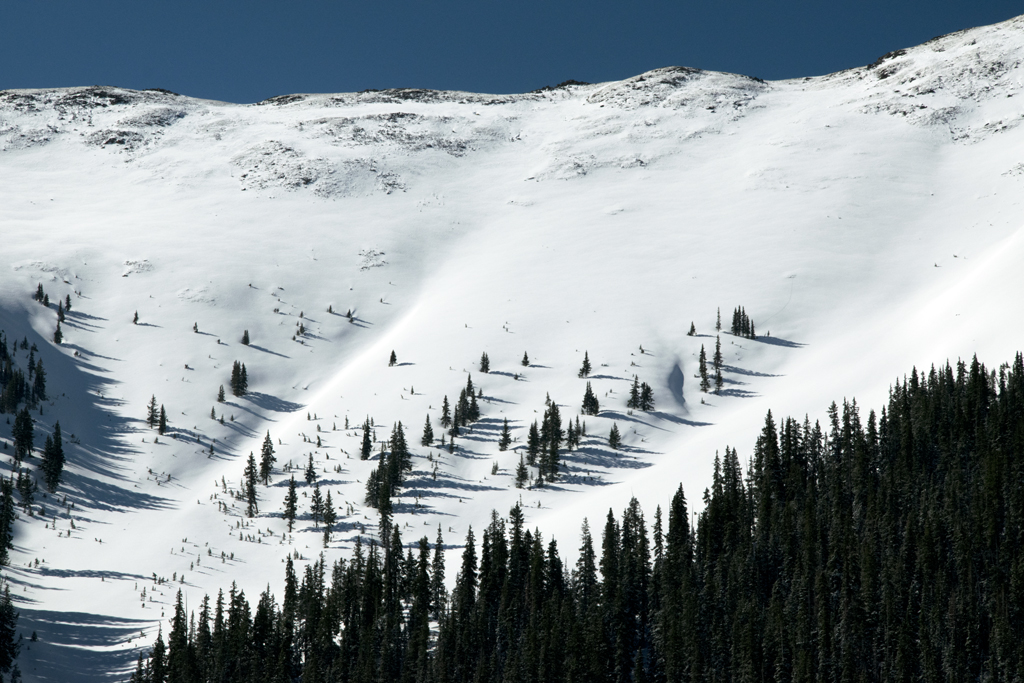 Stay tuned for future posts, as I said, about the rest of the weekend. We even stopped at Buffalo Bill’s gravesite on Sunday. Buffalo Bill! 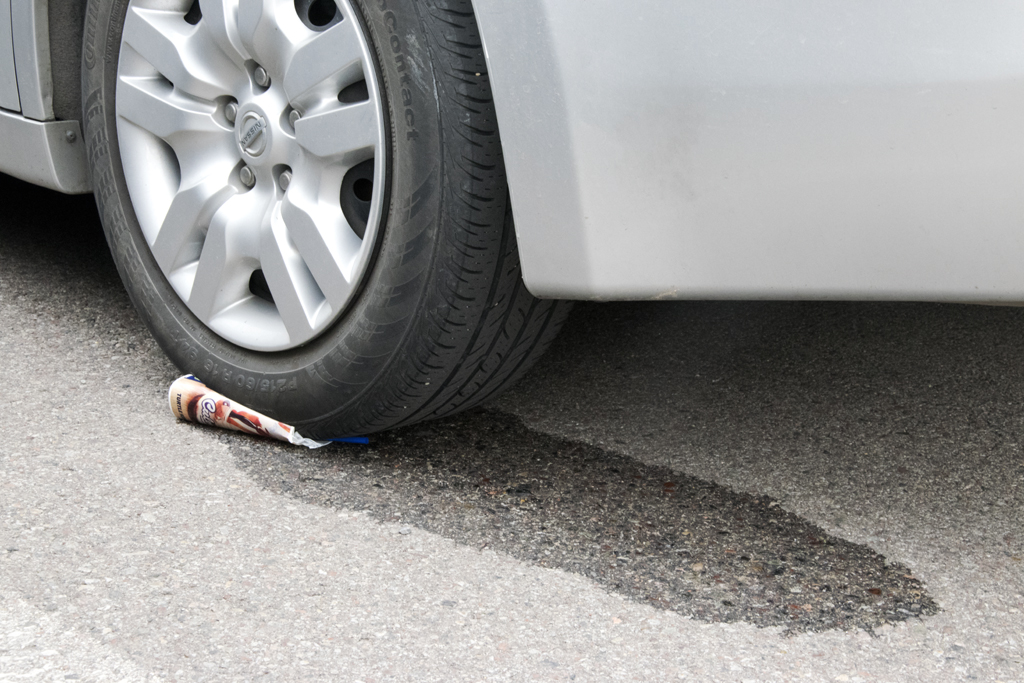