Last week I brought you some pictures of the Rocky Mountains along I-70 west of Denver that I shot over Memorial Day weekend this year. Our first destination on the roadtrip was Glenwood Springs, a suggestion by a server at a sushi joint called Happy Sumo in nearby Westminster. During the same conversation, she also said the most true thing we’ve heard since we moved here: “Just go to the mountains and anywhere you get off the interstate is amazing.” Yes!

So Glenwood Springs lies about three hours west of Denver and is known for its hot springs, something we didn’t really realize until we got there. We didn’t partake of the healing waters on that expedition, but we will next time. For our first jaunt, though, we discovered lots and lots of other stuff. For one thing, the town looks like an Old West movie set… 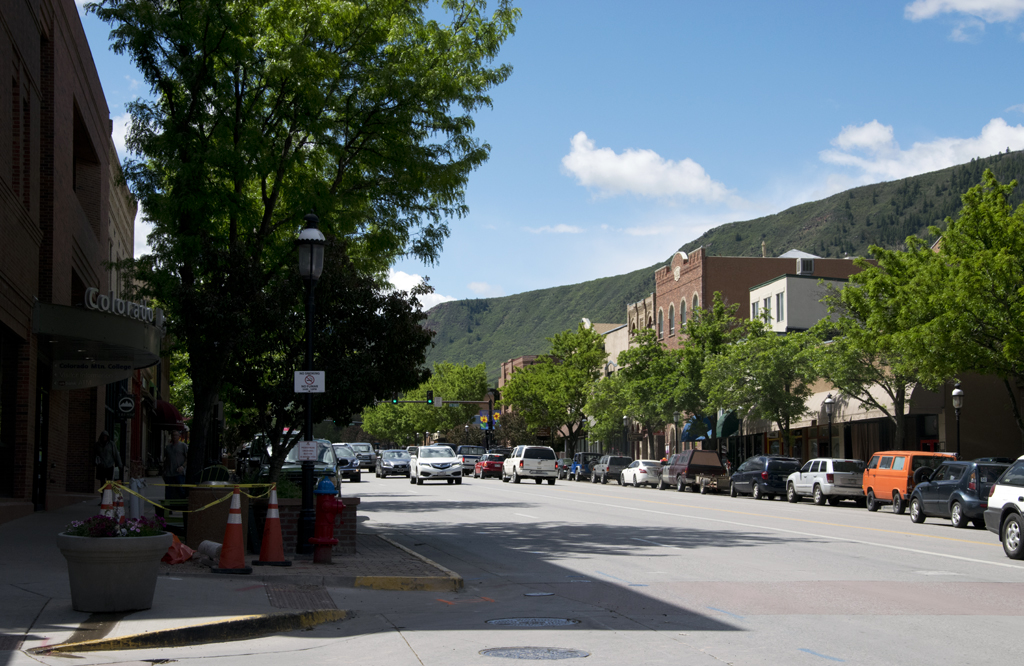 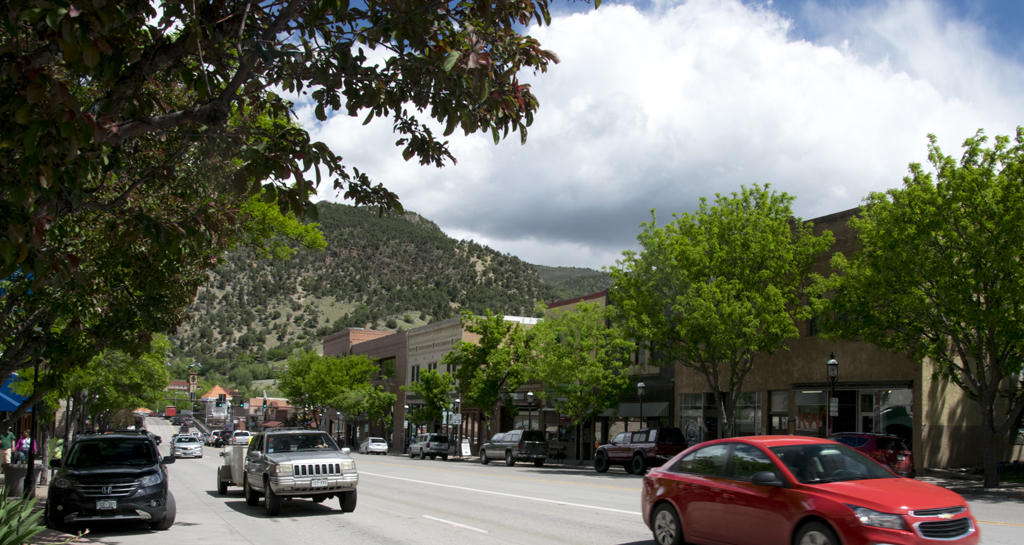 … except for the road construction right down the middle of town: 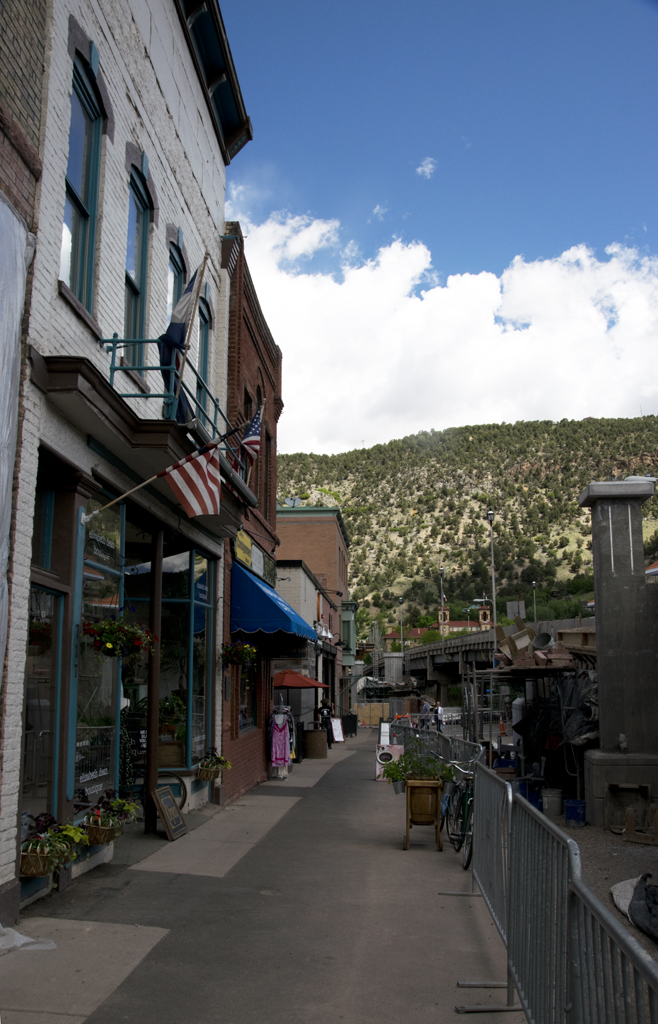 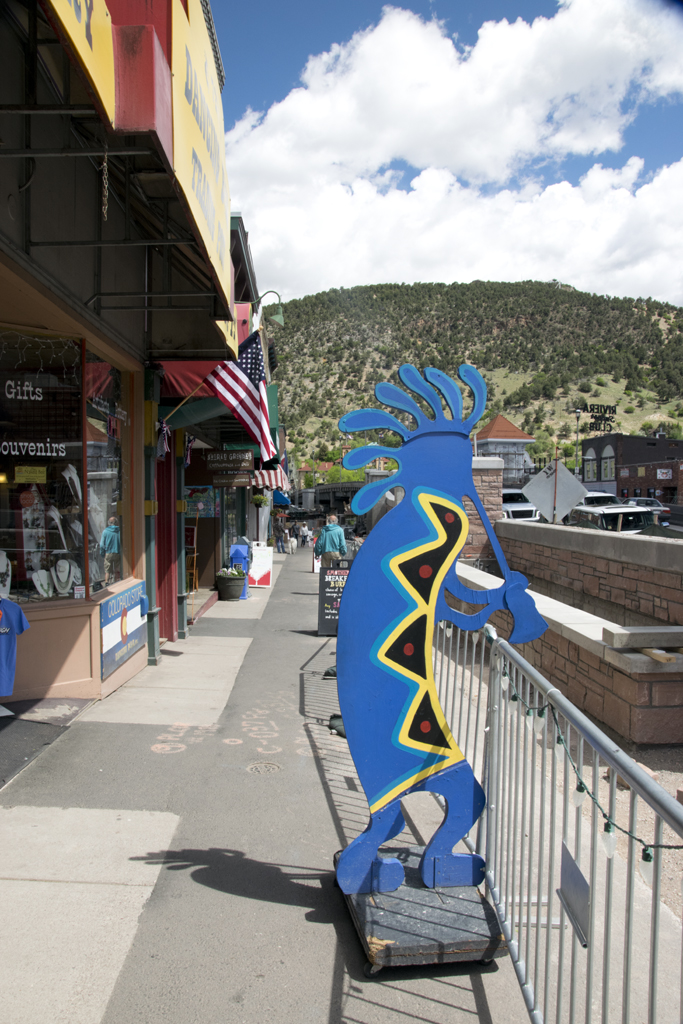 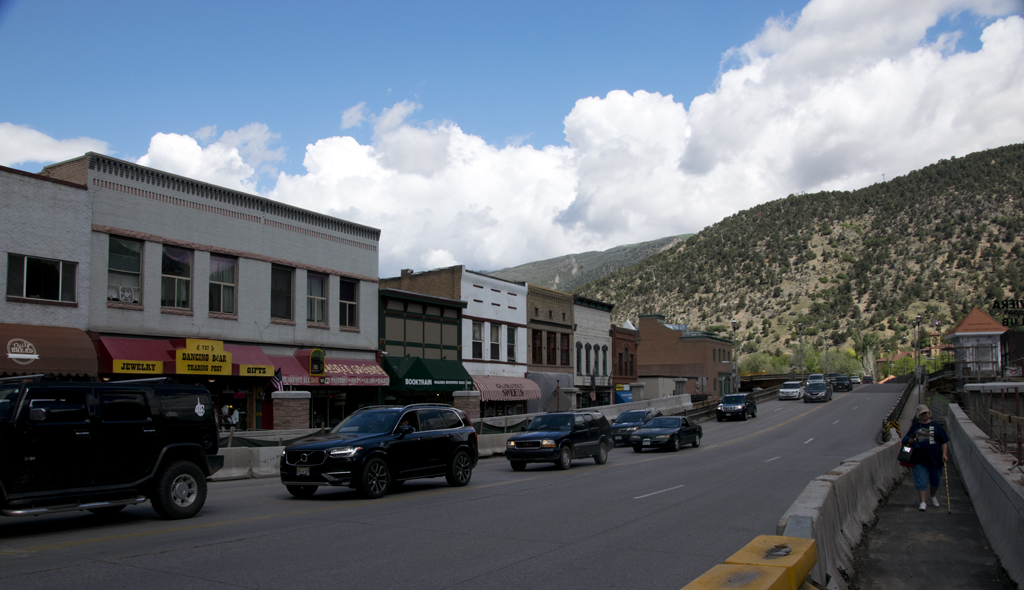 The hot springs were used by the native Ute tribe, who were nomadic. In the early 1880s it was homesteaded by people of European extraction. I find the alleyways telling in that the rear of the buildings look very authentically historic: 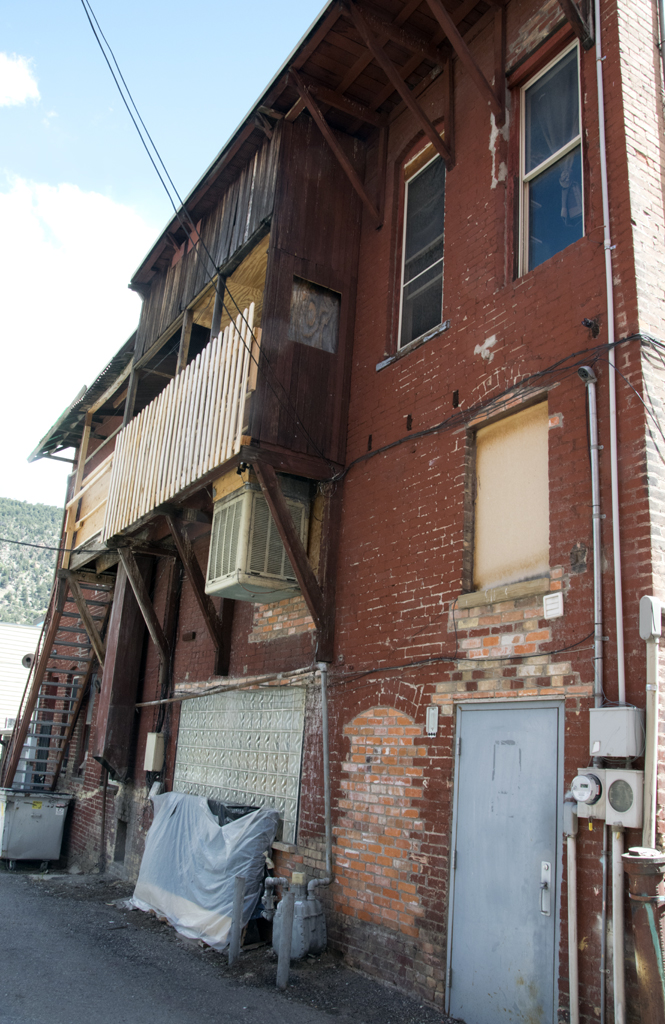 The railroad came into the area in 1887, bringing lots of tourists who wanted to partake of the sulphurous, healing spring waters there. The historic train station in Glenwood Springs also has a railroad museum. My husband and I tried to visit it, but, alas, we were too late. It closed at 3pm and we arrived at 2:58. In any case, I got some pictures of the station itself:

We discovered that Amtrak takes passengers from Denver to Glenwood Springs in just a few hours, so we are going to take the train up there next time. The rest of the town is composed of fantastic restaurants, shops, tour companies, outdoor gear stores and not a few hotels.

For dinner, I especially recommend the aged pork chops at the Colorado Ranch House. They had a cranberry-based sauce on them that was perfect for grilled pork! I managed to get the recipe, so I’ll bring you that once I figure out the proportions. Here are two other restaurants in town whose names and buildings were intriguing: 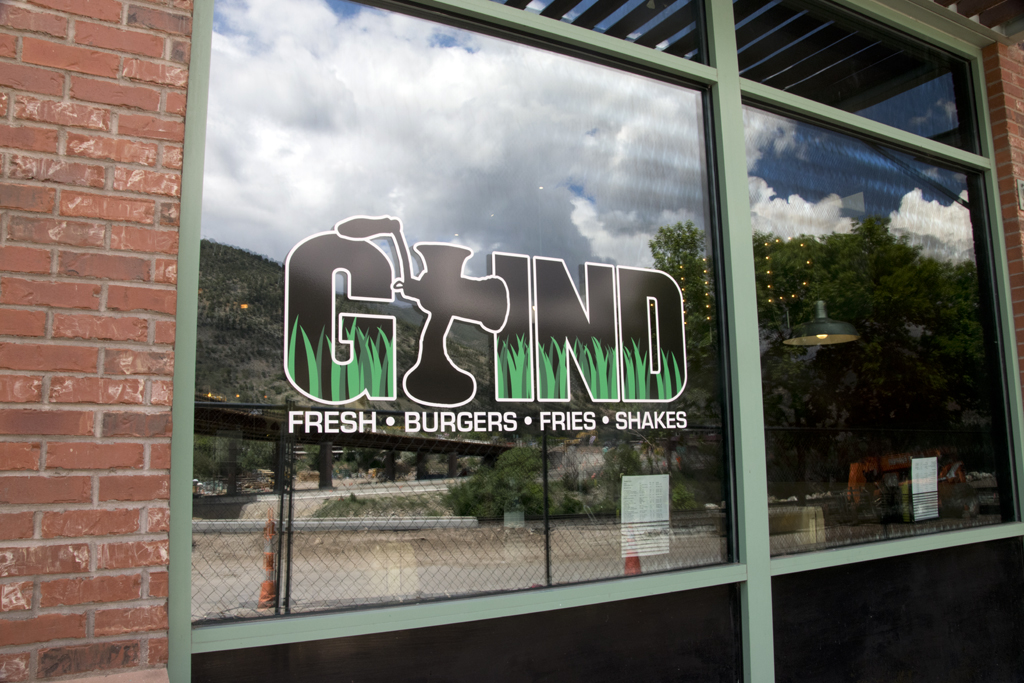 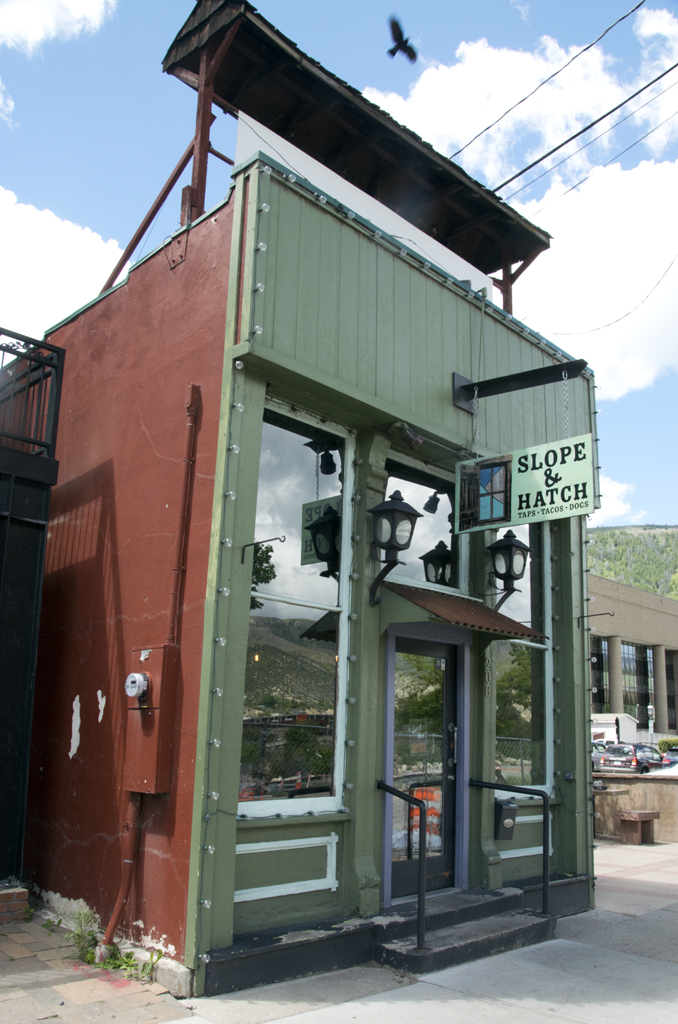 Then there were the shops. We first stopped by the Cooper Corner Gallery, which is a co-op of local artists. Then I was admiring the High Country Gems and Minerals shop next door, in front or which was painted this seven-pointed star: 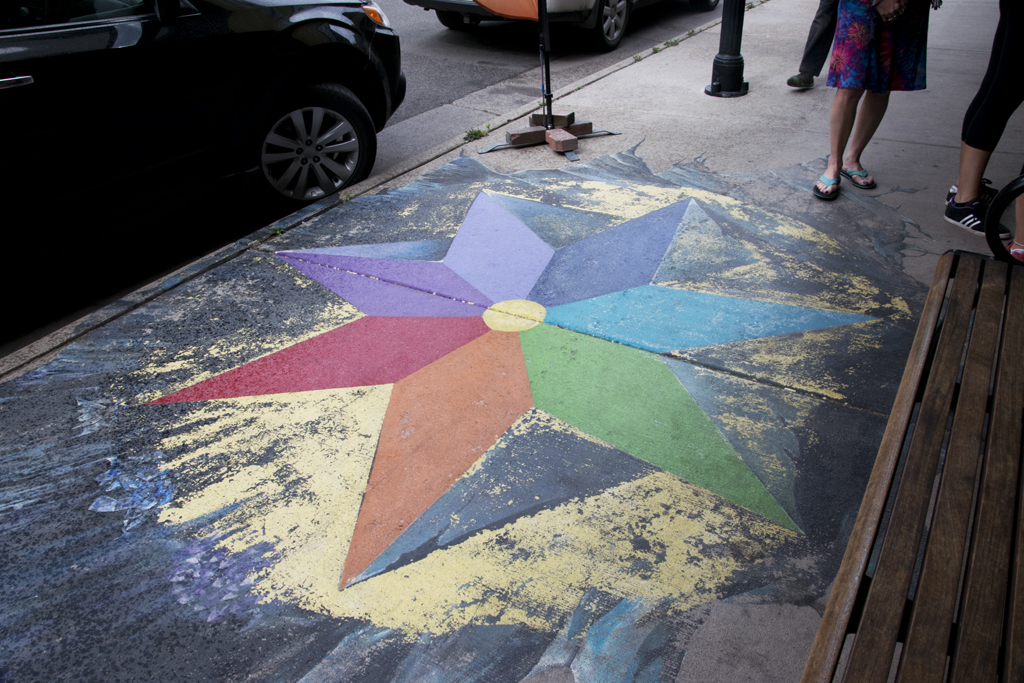 As I was photographing that, I was accosted by the owner, who identified herself as “Patty the Rock Star”. She was the creator of the painted star. She beckoned me into the shop and showed me a seven-pointed geode to match the sidewalk: 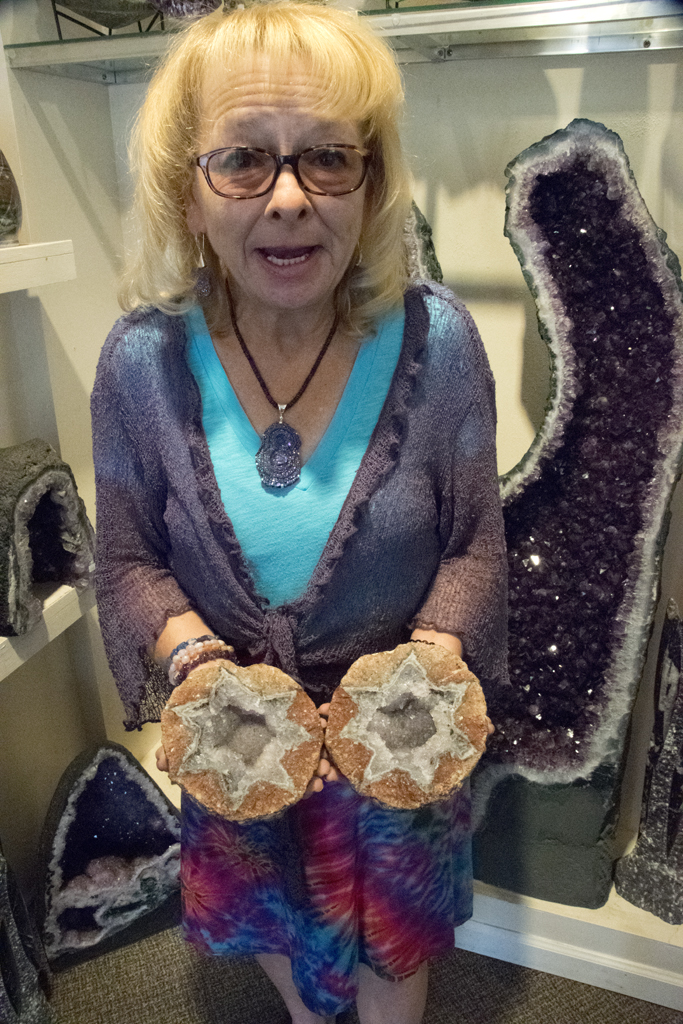 This woman was very talkative and had a million stories, not the least of which was how she talked her friend into selling her that geode, though “it wasn’t for sale”. He’d discovered it in Mexico. We spent a lot of time in that shop, talking to Patty and the staff and digging through piles of rocks and gems.

Then it was down the street to the Rocky Mountain Ranch leather shop: 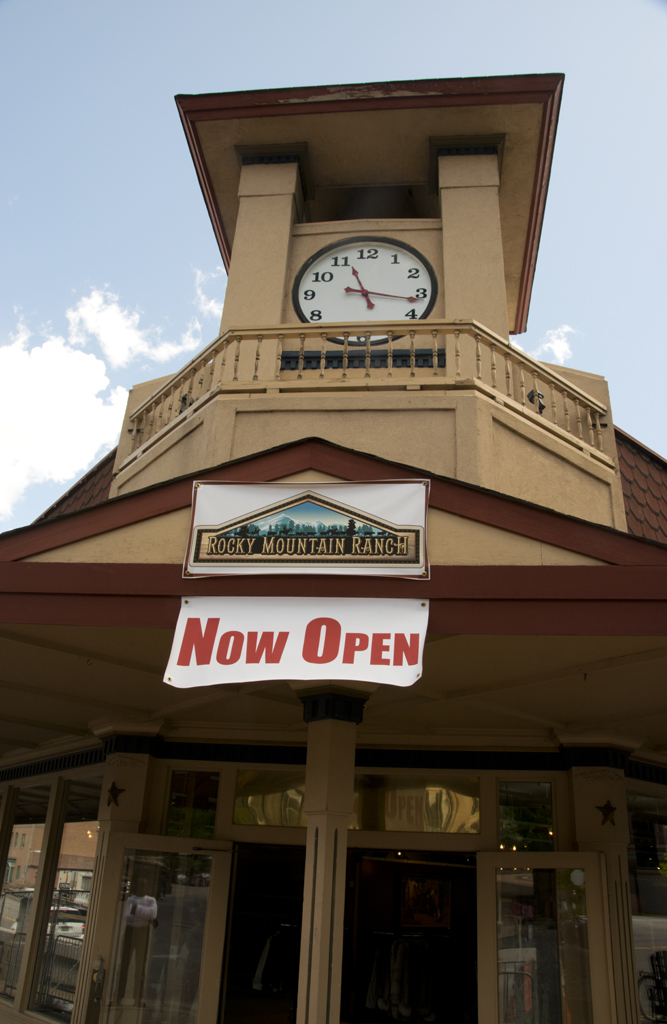 When we first stepped into the shop, there was a distinct aroma of fresh leather goods. Farther back into the store, however, we began to smell bacon, which I thought was pretty funny. I looked around for silk purses. Turns out there was an open entryway in the wall between the leather shop and the eatery next door, which was serving breakfast. So, leather, bacon, it was all of a theme. It was only after I left the leather shop that I noticed this on painted on the front door: 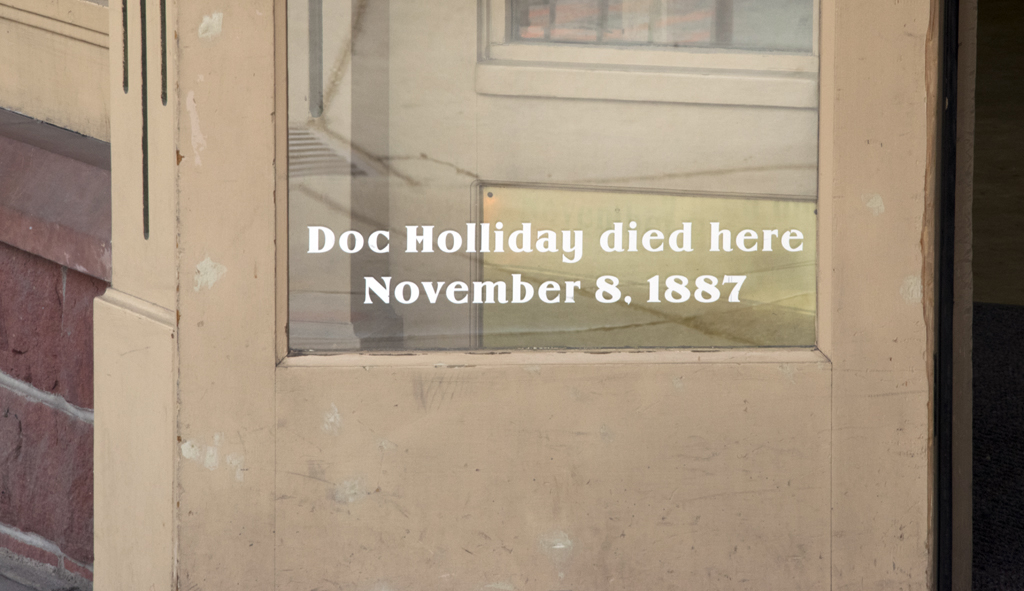 So, of course, I had to look that up. I had romantic, Old West visions of Doc Holliday in a gunfight, finally perishing on the dusty streets of Glenwood Springs. But, alas, I was way off. He was from Georgia (b. 1851) and earned a degree in dentistry in Pennsylvania, so he really was a practicing doctor for a while. He contracted tuberculosis shortly after beginning his practice and moved to Dallas where the hot, dry climate would be better for his health. He practiced there for a while but then moved farther west to Denver, Cheyenne and many other locations. He ended up becoming a gambler and gunfighter in Arizona and met famous lawman Wyatt Earp when he drew a gun on some cowboys threatening Earp in a saloon. (I feel like I’m writing a movie script.) He became close friends with Wyatt Earp and was involved in the gunfight at the OK Corral, among other things such as murder charges, train robbery accusations and the like. However, Holliday wasn’t killed in a gunfight. Instead, he’d come to Glenwood Springs because his tuberculosis was becoming debilitating. He hoped the hot springs would help him recover, but that didn’t happen. He died in 1887 at the age of 36 in the Hotel Glenwood, which stood on the spot of this leather good store until it burned in 1945. You can visit his grave in the nearby Linwood Cemetery. Apparently it’s quite an easy walk to his grave if you follow the Doc Holliday Grave and Hiking Trail, a 0.7-mile trek starting right down town.

Glenwood Springs has been a player in the tourist industry from the get-go. It thrived during Prohibition, Hollywood has seen fit to film nine movies there, including Mr. and Mrs. Smith with Pitt and Jolie, plus the Great K and A Train Robbery with Tom Mix, a silent-era jewel. In addition to the stars from the movies in progress, celebrities visit often. It has a giant public swimming pool, which we bypassed because of all the kids carrying pool noodles lining up there. Next time, though, we plan to spend lots of time at Iron Mountain Hot Springs resort. But enough of future plans, stay tuned for the next few blog posts where I describe what we DID do! As in, a mountain-top amusement park and a historic, possibly haunted, hotel. 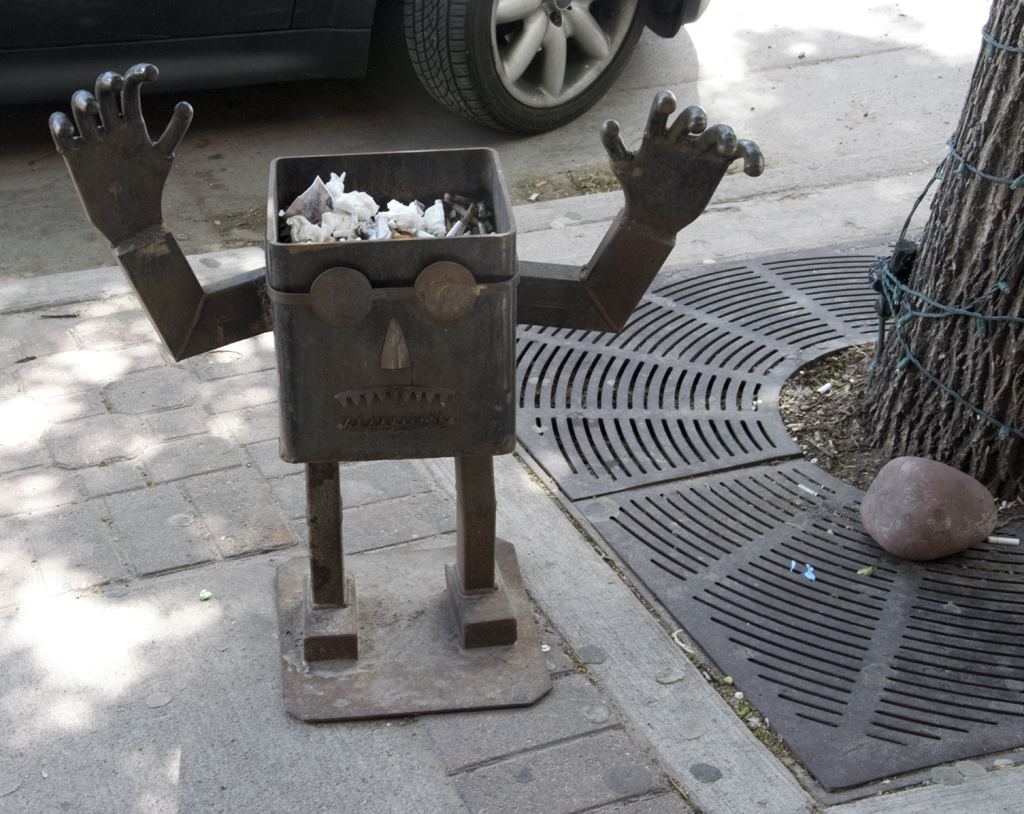