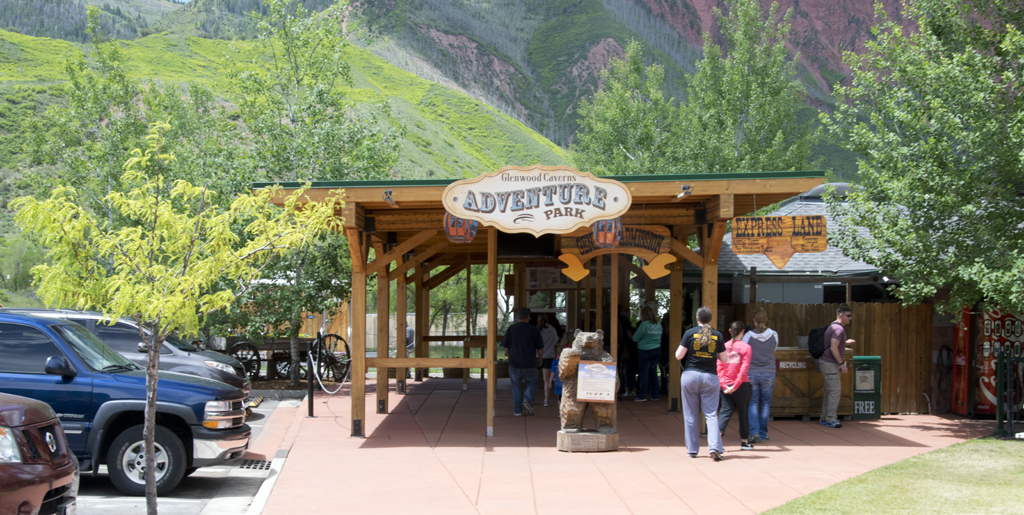 This week, another portion of our Memorial Day trek to the Rocky Mountains, Glenwood Caverns Adventure Park. One night while we were looking out the window from our hotel in Glenwood Springs, my husband spied some lights atop a nearby mountain. In the light of day, we could see there was a rollercoaster there. 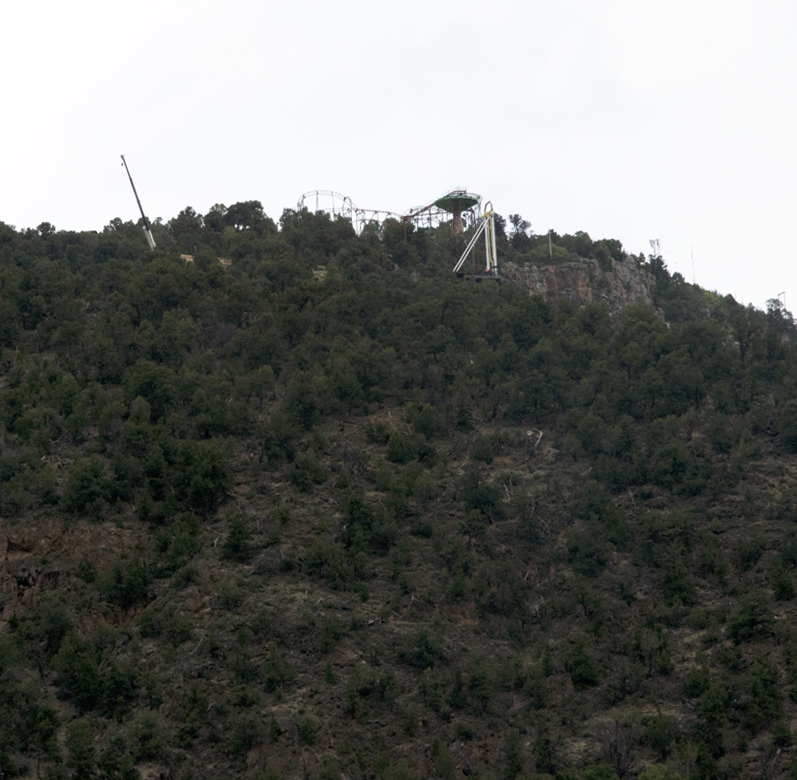 Not too much trouble later, we discovered there was a small amusement park on top the mountain. We drove to the base of the mountain – next to the Colorado River – where the ticket booth and skylift gondola station were. 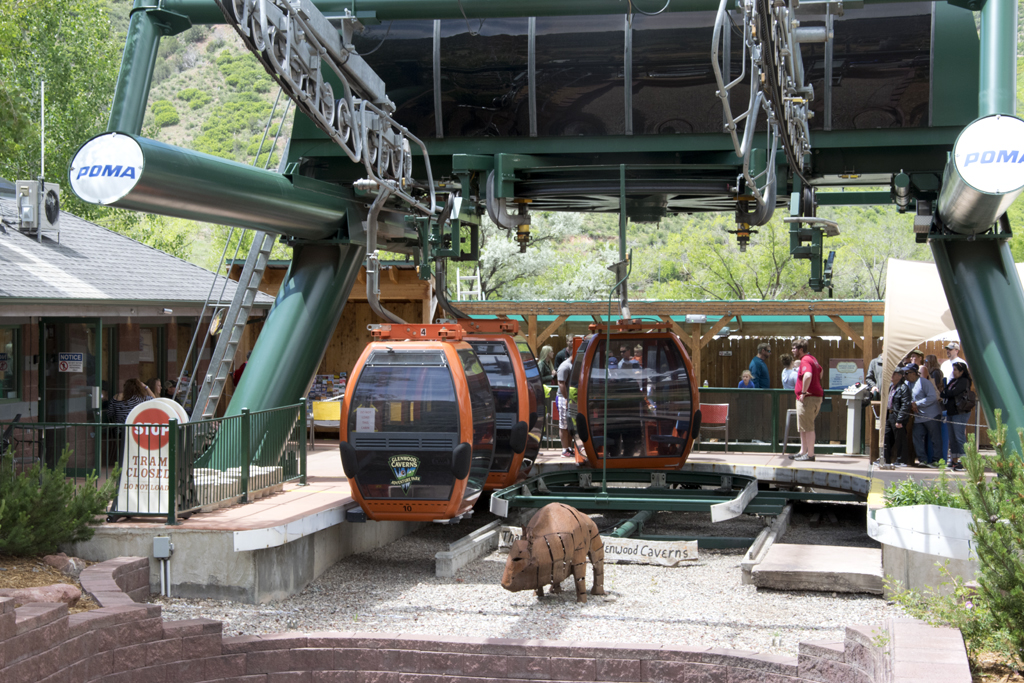 Shortly thereafter, we had our tickets and were boarding a gondola. 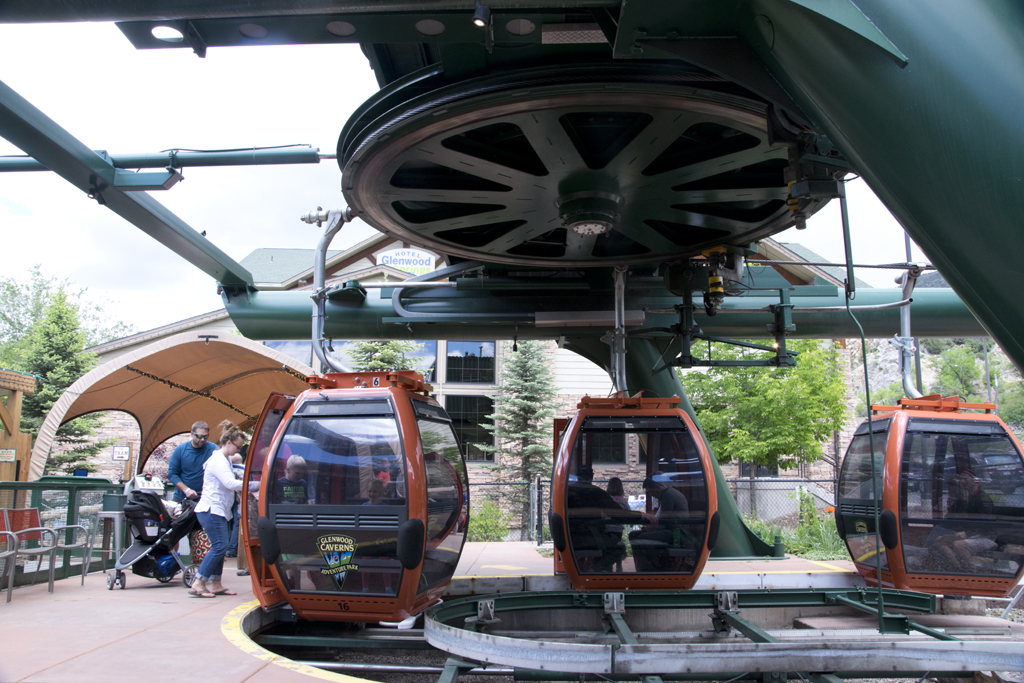 Normally these things freak me out a little, but for some reason I was more than ok with the climb, even after looking at the mechanism that attaches the gondola to the cable. Even after thinking that this was all that stands between me and certain death on the mountainside! 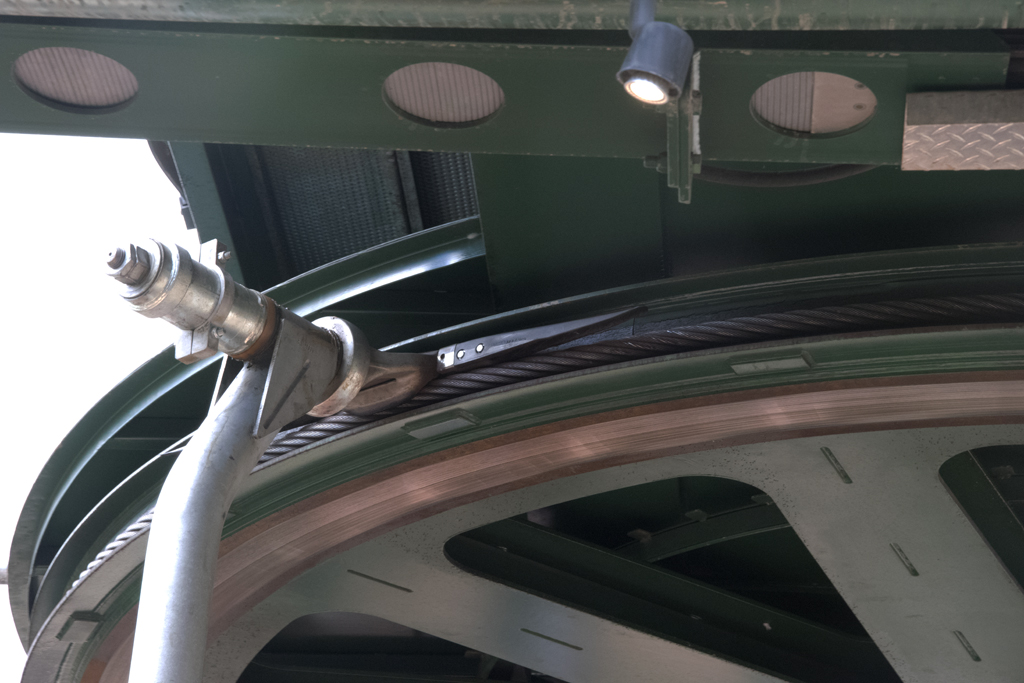 Soon we were on our way up… 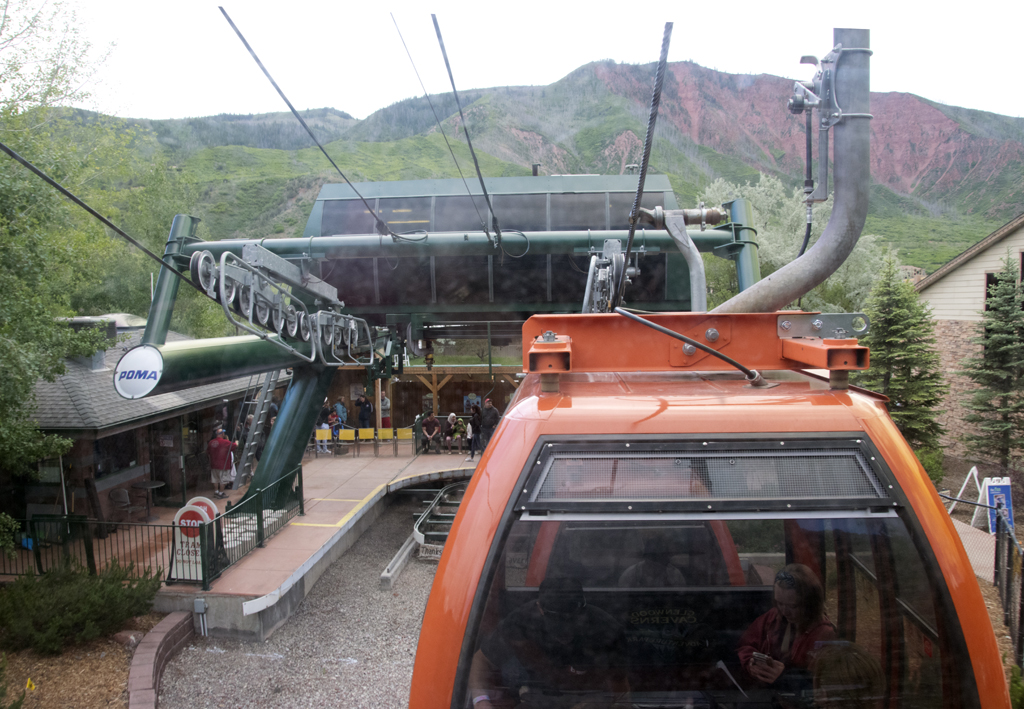 I think that red mountain in the background is called Iron Mountain. Very beautiful! 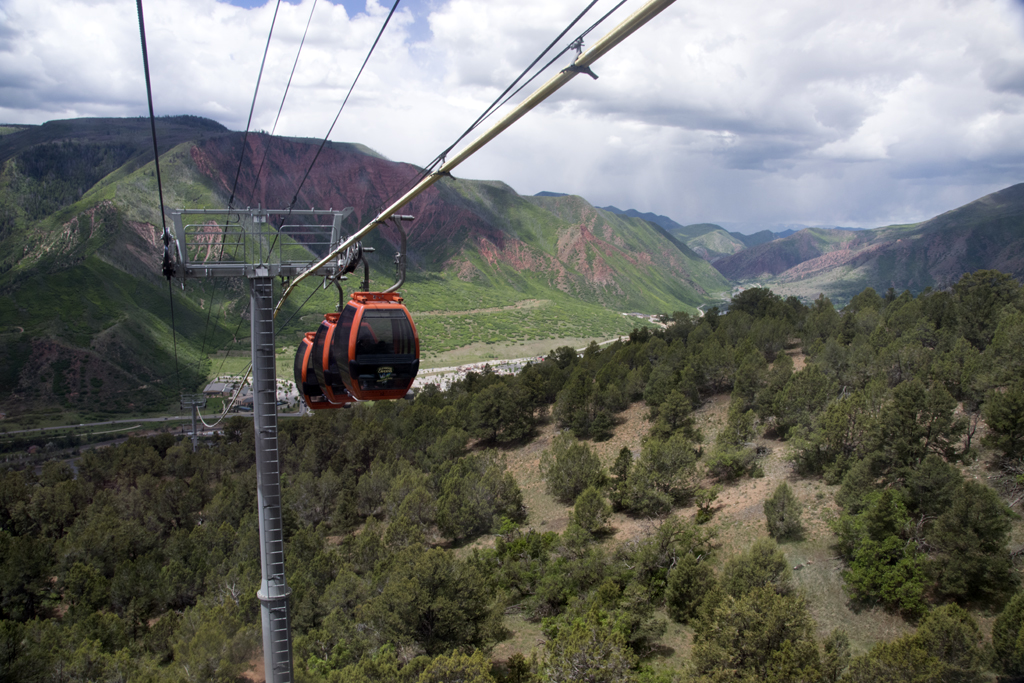 On the way up, we saw a track with occasional coasters whizzing by: 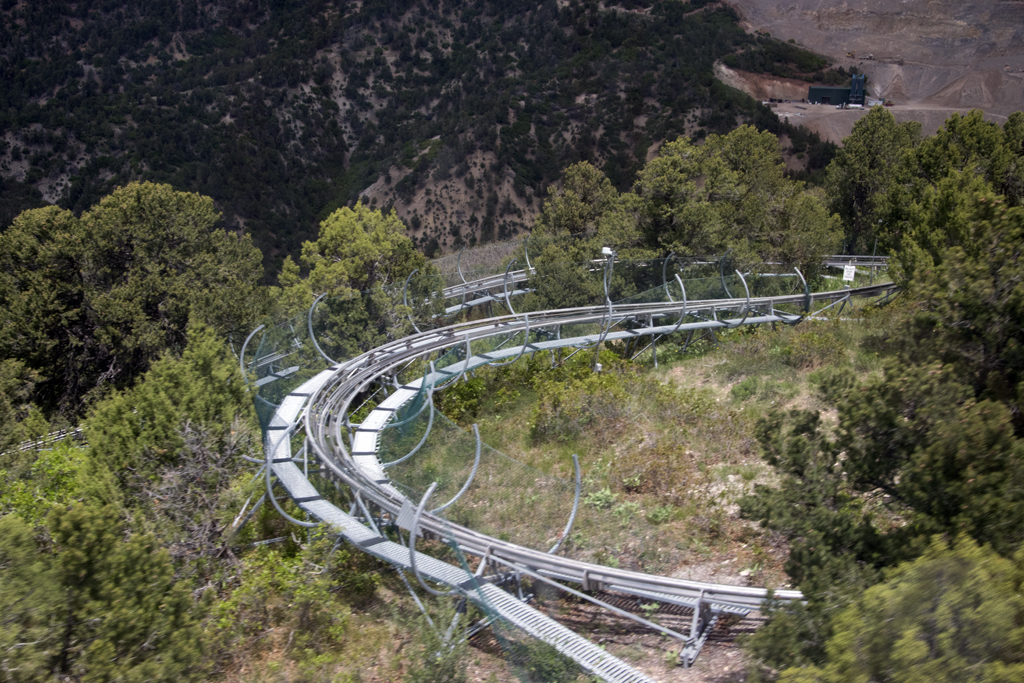 About 15 minutes later we arrived at the top. For those of you who have never ridden one of these, the cars don’t stop. You have to board and disembark while the gondola is slowly moving around the circle. 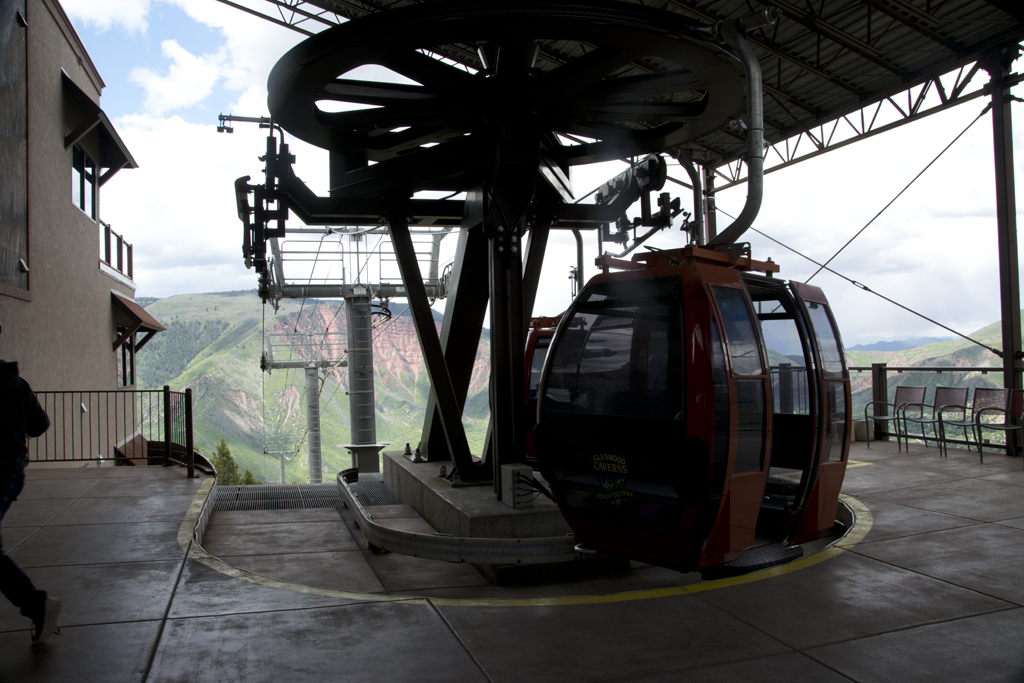 Exiting the skylift station, we were confronted with a small but fun little amusement park. We were probably the only couple there without children that day, but we tried to look as non-creepy as possible. 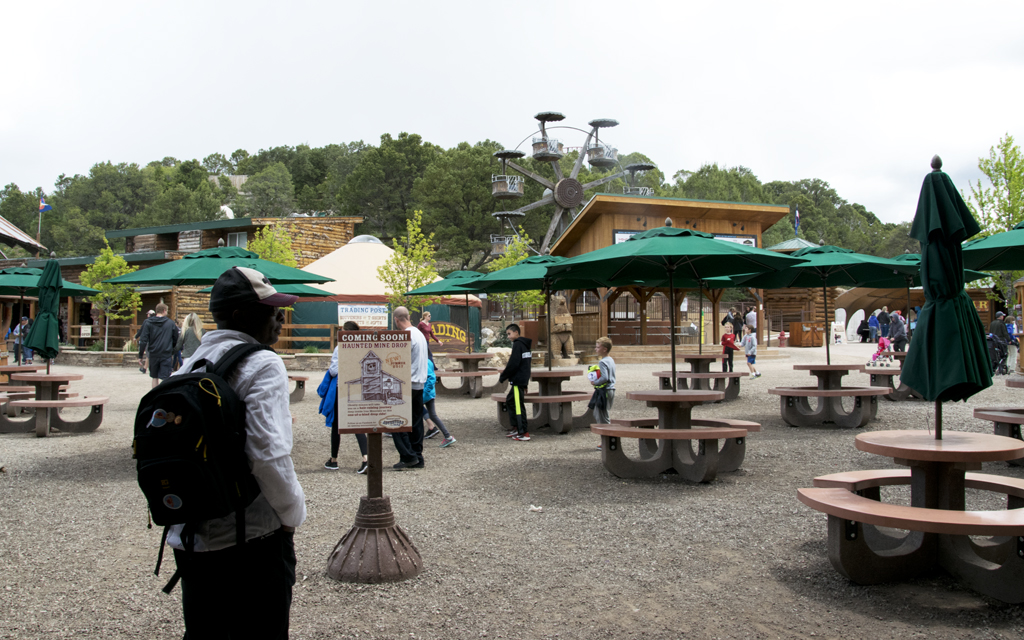 It was very cute and not as hokey as I imagined. Kids could even buy a bag of mountain dirt in the gift shop and “pan for gold” at a trough nearby. They were guaranteed to find gold! 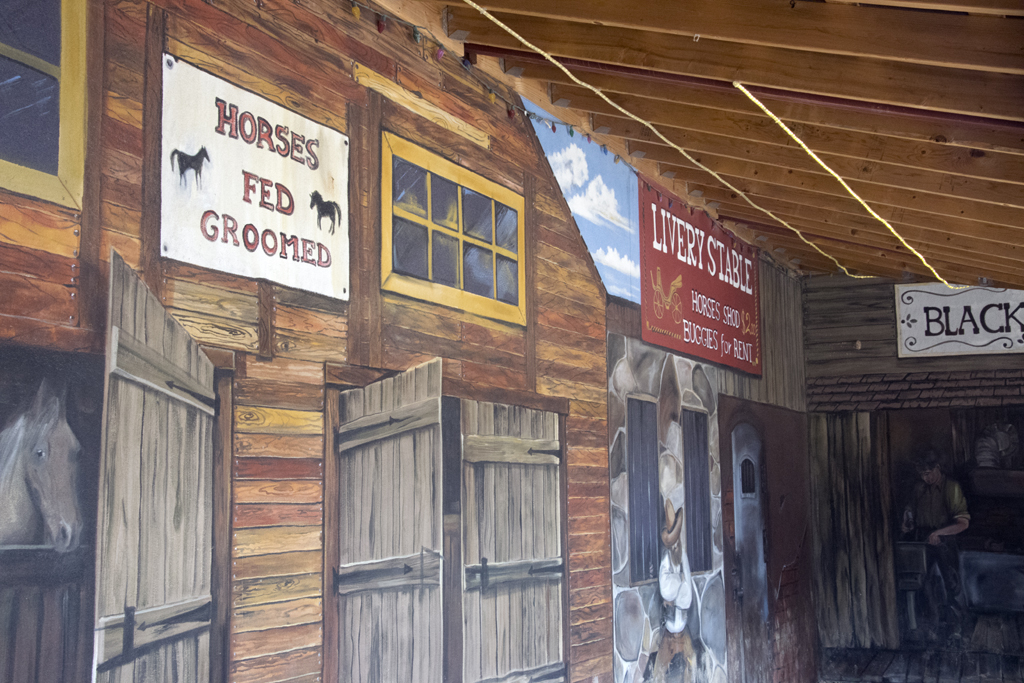 There was a blacksmith shop, a shooting gallery and more, rather anachronistic concessions along the gravel walkways: 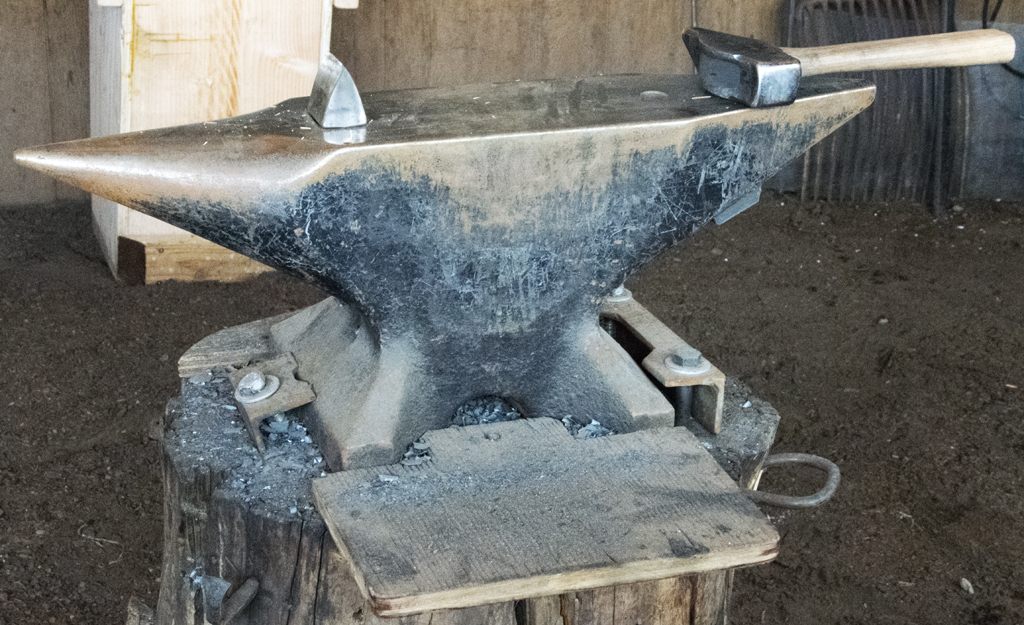 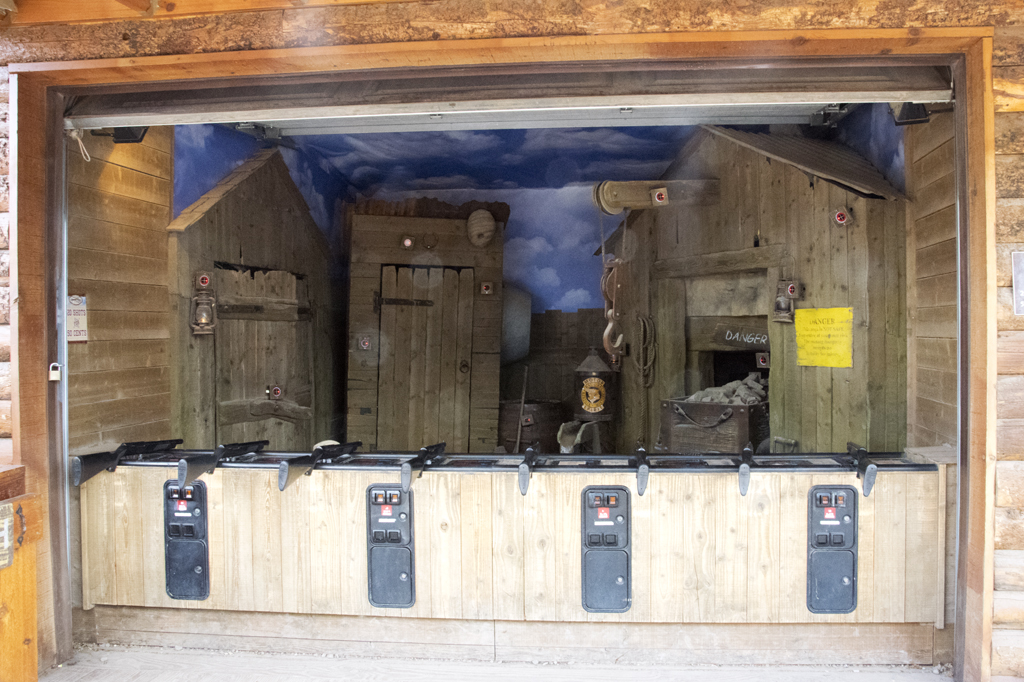 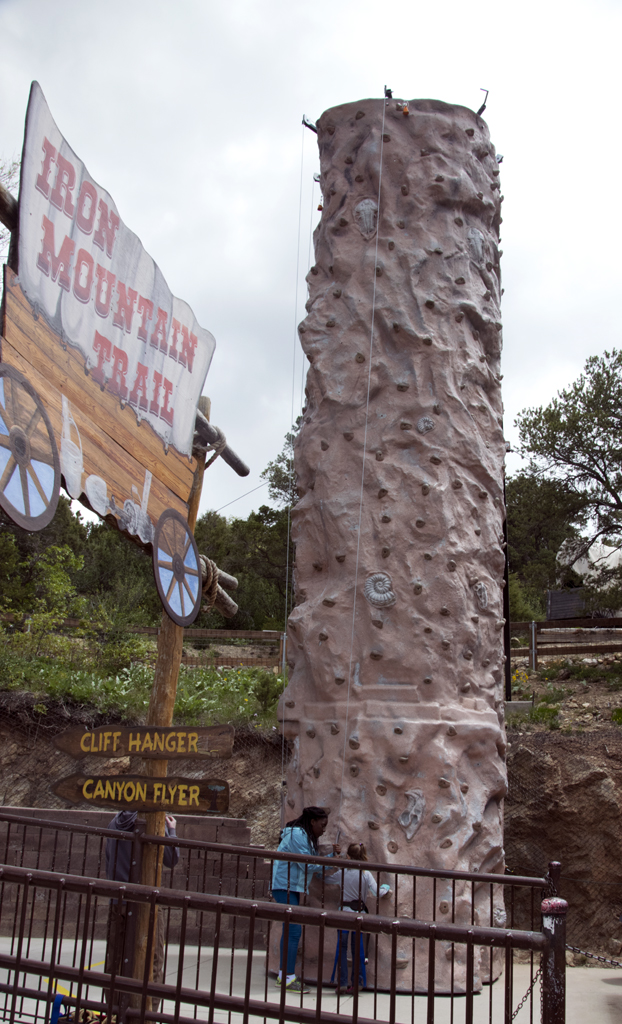 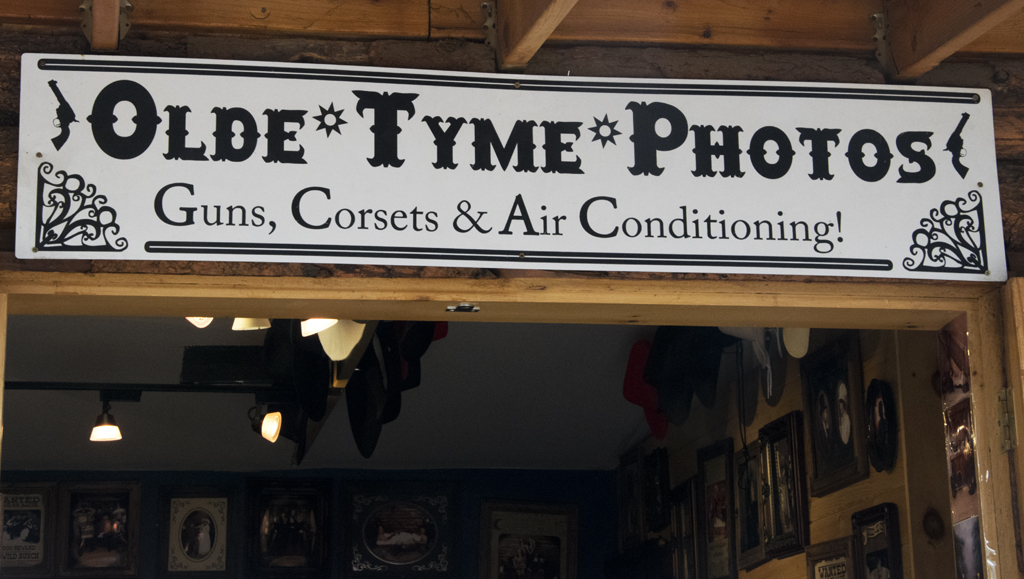 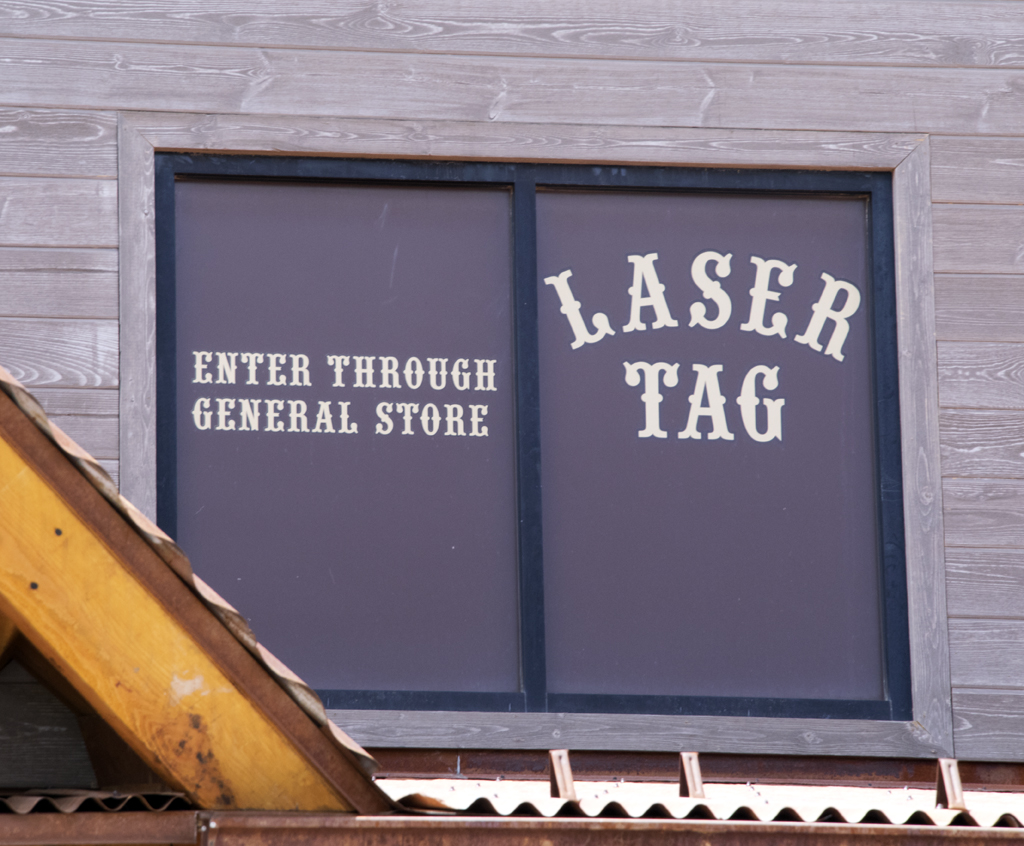 We found the station where you could get on a little coaster and whiz past the gondolas on that track we saw: 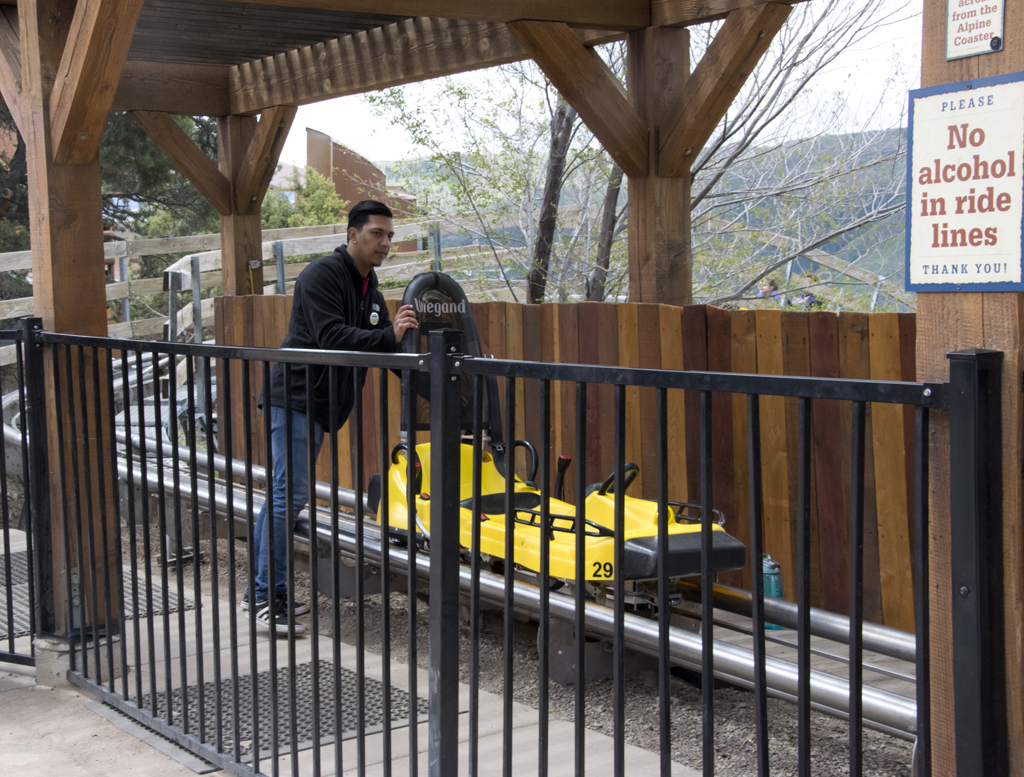 By far the most fun I had was when we were accosted by two men who were under the impression they were Old West sheriffs. They made us pose with authentic old weaponry so we could take pictures of each other. I totally dig the attitude of the guy on the left: 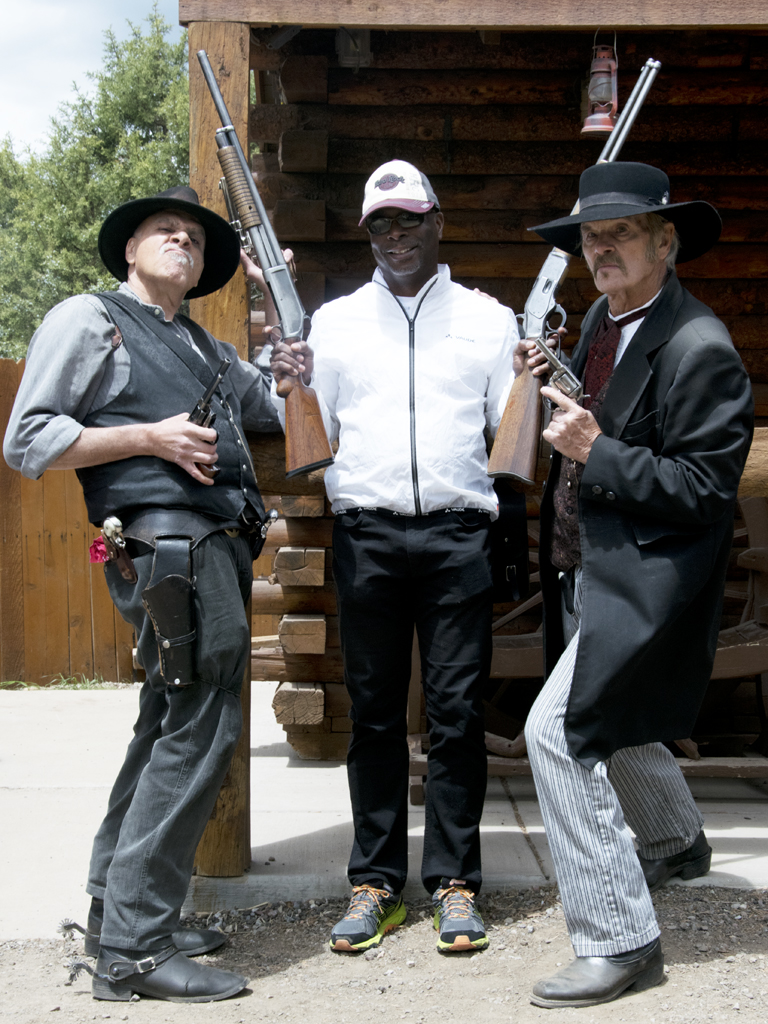 In my photo, I’m holding an “Arkansas toothpick”, a knife with a blade about 16 inches long!

We took a walk up a gravel path to more attractions and rides. Along the way we saw a lonesome cowboy singing by his wagon. Never mind that amplifier peeking out from under the wagon cover! 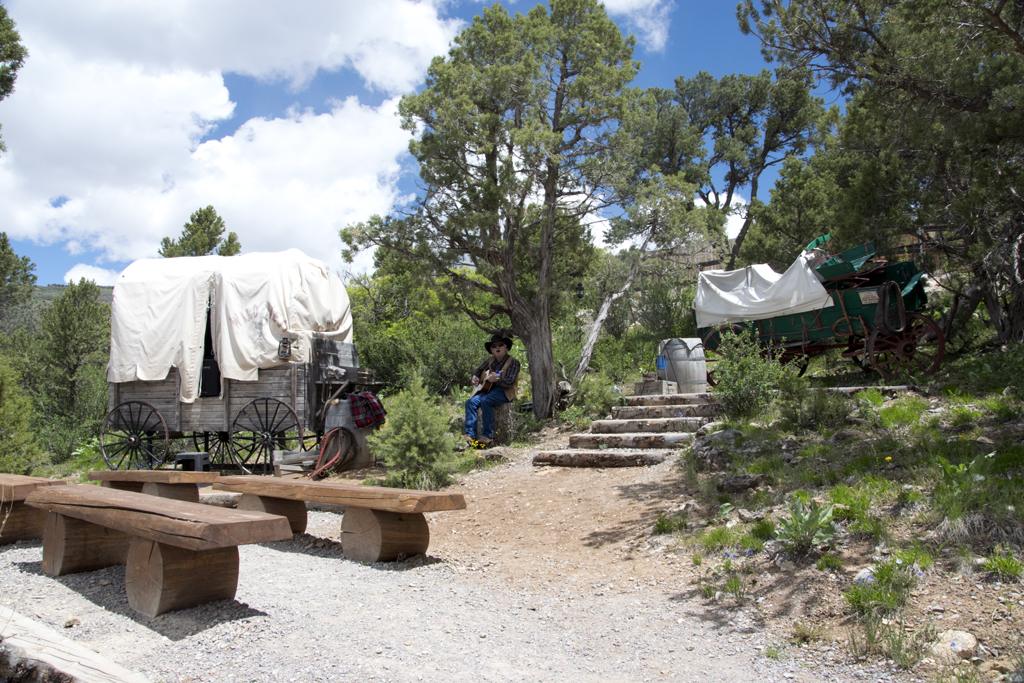 Farther up the trail we heard Ma and Pa arguing. Turns out it was a two-story outhouse with mannequins and a recorded conversation playing. So tacky, and terrible, terrible jokes, too. 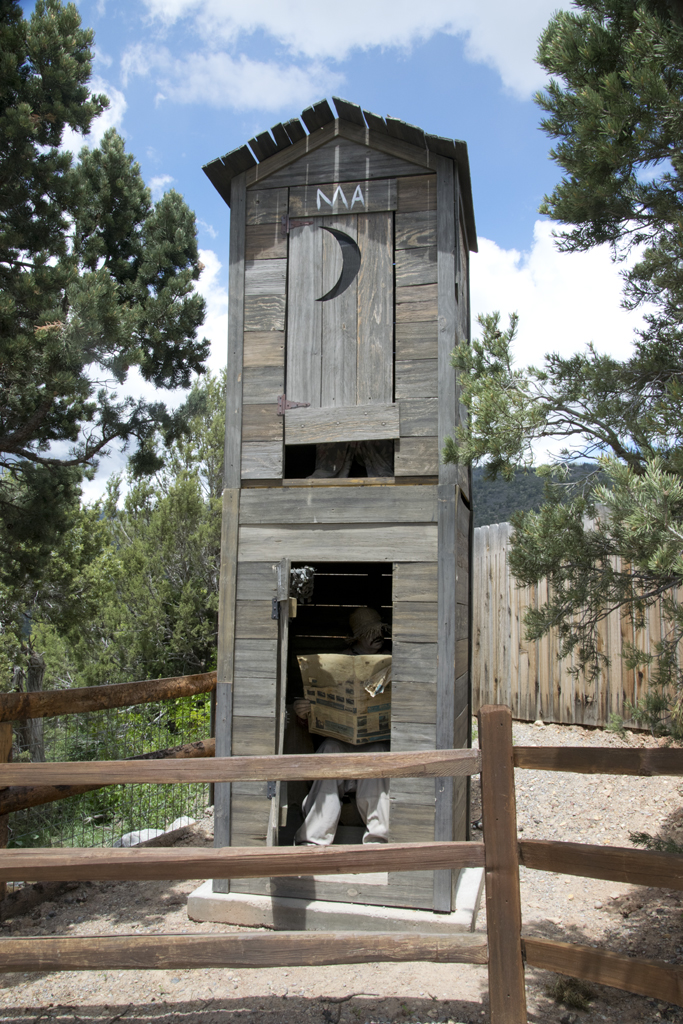 At the end of the trail we found the roller coaster you can see from down below, plus more rides that swing you out over the valley. 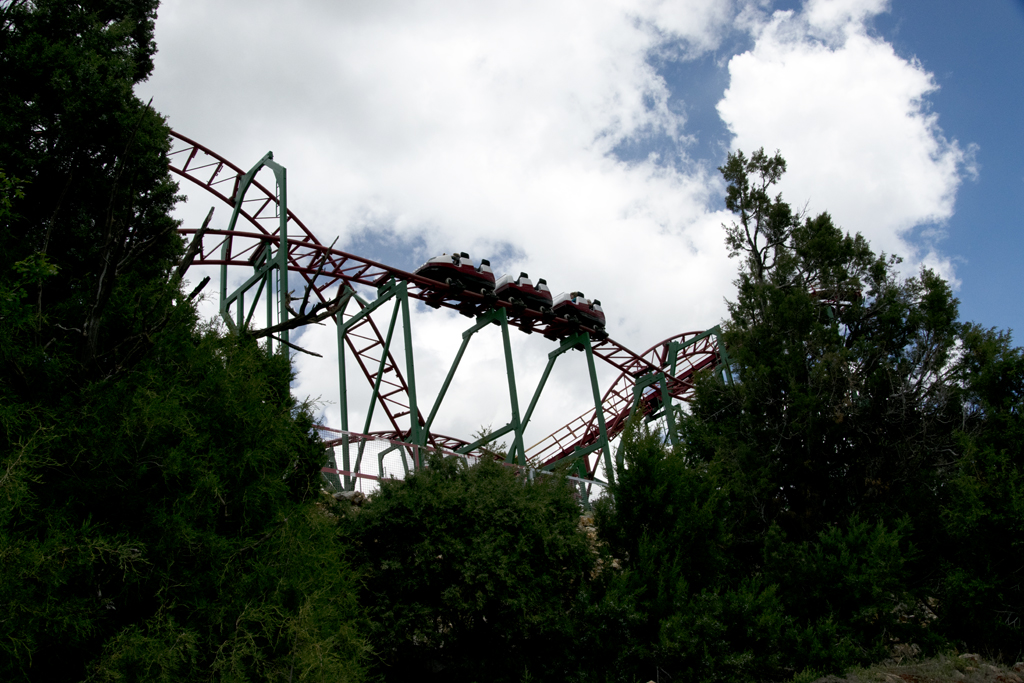 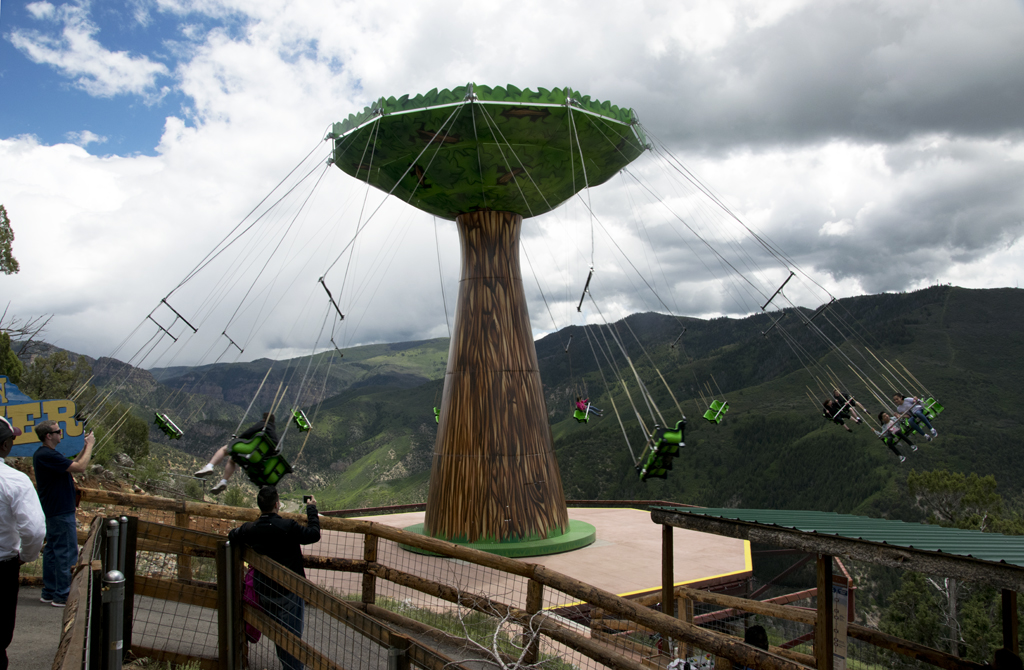 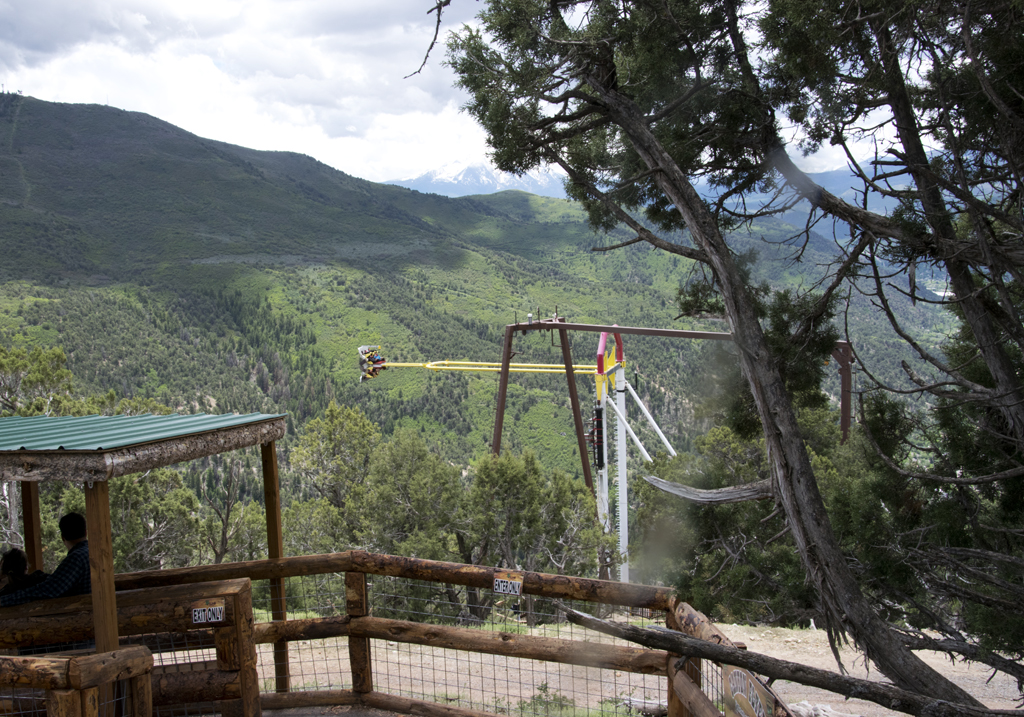 Although I would have gone on them, I was pretty happy when my husband said, “Next time.”

After strolling around a bit more, we made our way back to the gondola station and headed back down to the valley. A rain storm had moved in, though, and it took us far longer to descend than it did to come up. The gondolas stopped every time there was a gust of wind. That didn’t bother me, either, but I’m pretty sure the wife of the family in the gondola with us left her fingerprints in her husband’s arm. 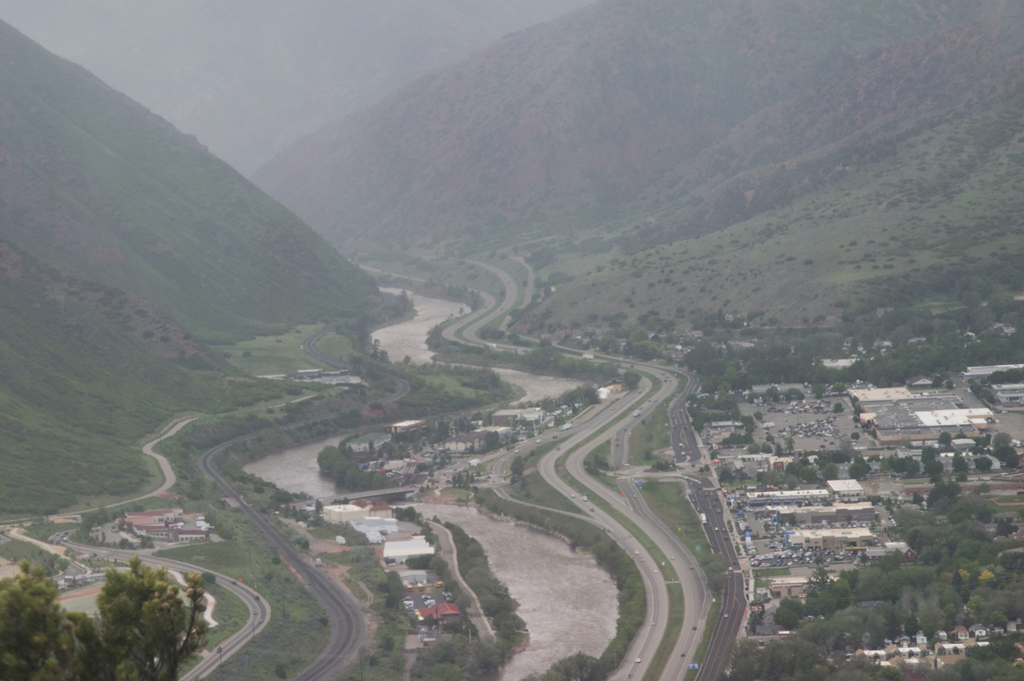 You can also take cave tours while visiting the park and book events such as birthday parties there. It’s in the 1,000 Places to See Before You Die book, too. Entry is $16 per person, $11 for kids just to ride the skylift and get into the park. It’s much more if you want to do the caves and rides. But there is a discount and other deals if you buy one of the Glenwood Springs packages. Check the website if you’re interested. I thought it was fun! 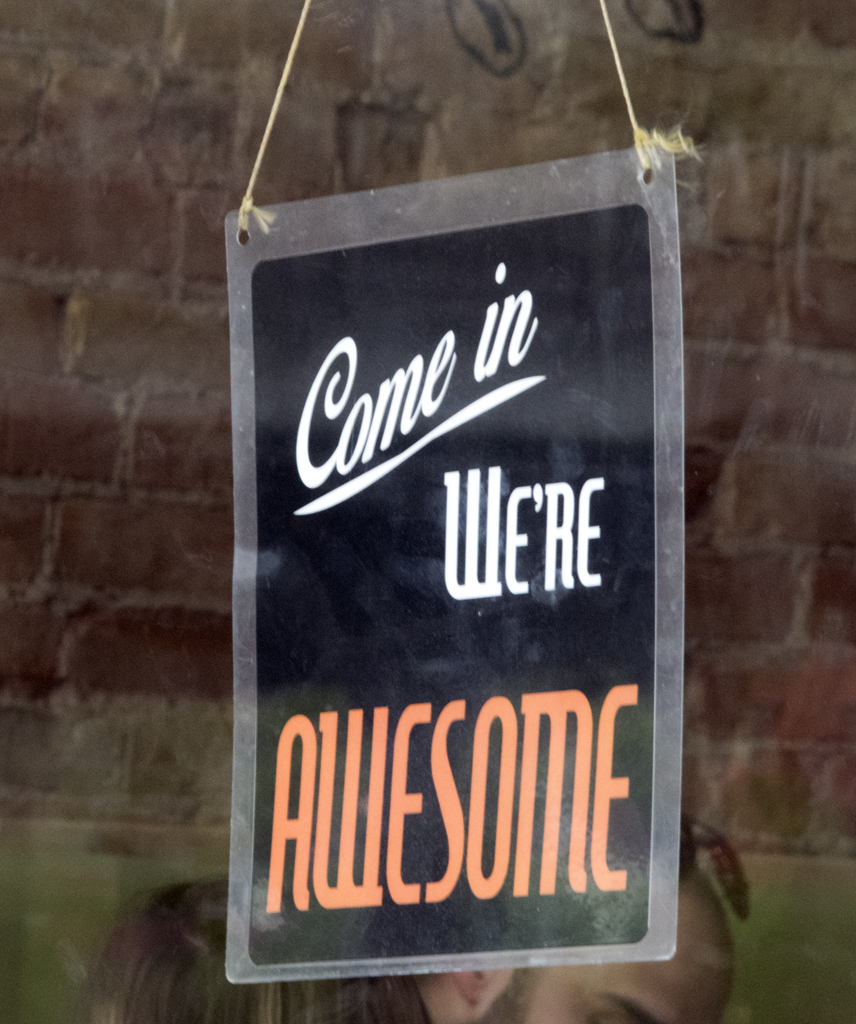