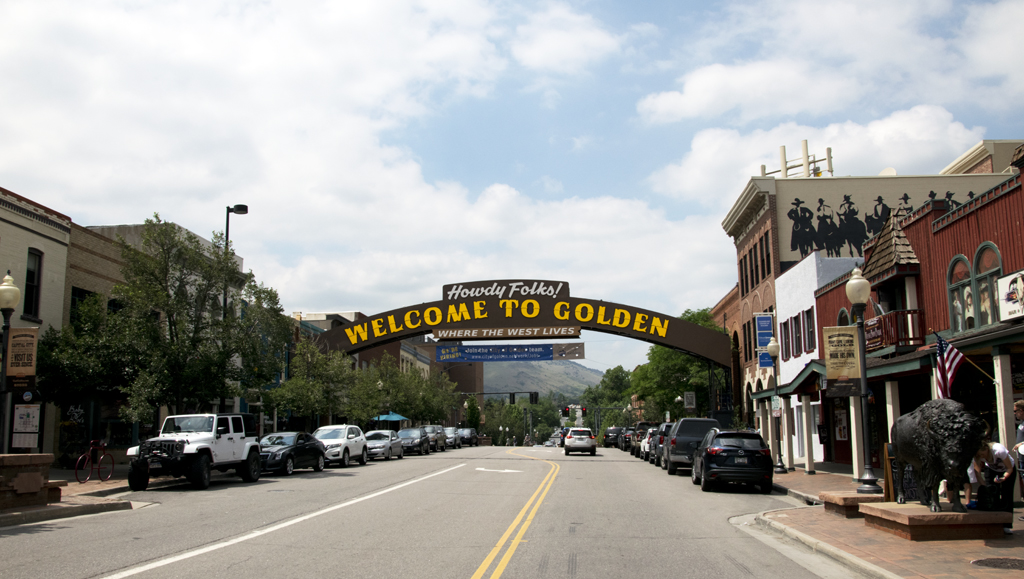 Remember: only two more weeks til the end of my summer book sale! There are some very deep discounts on my books just now, and anything you order will be signed by the author (me!) at prices less than Amazon. And these sale prices include shipping! So take advantage of this opportunity to get signed copies of Photos for No Apparent Reason (PFNAR) 2015 and two of my popular cookbooks (German and Czech). Get some of your holiday shopping done this month! Sale ends August 31!

This week I’ll show you some pics and give you some info about the big little town of Golden, Colorado. Anyone who hasn’t been living under a rock will know that it’s famous for the Coors Brewery, and I’ll give you a rundown of the tour there in a future post. Today I want to give you some background about this Old West town that was once in contention for Colorado’s capital before Denver horned in and took that over.

You might remember I mentioned Golden in my post about Buffalo Bill’s grave. In that post you can see a picture overlooking Golden and notice that it lies between North and South Table Mountains (mesas). The city lies about 15 miles due west of Denver, along Clear Creek at the base of what is called the Front Range of the Rockies. It’s that creek that Coors uses for its beer. Golden has in the neighborhood of 20,000 residents and is the county seat of Jefferson County. It’s slightly higher than Denver, at 5,675 feet above sea level. It was founded in 1859 as Golden City. 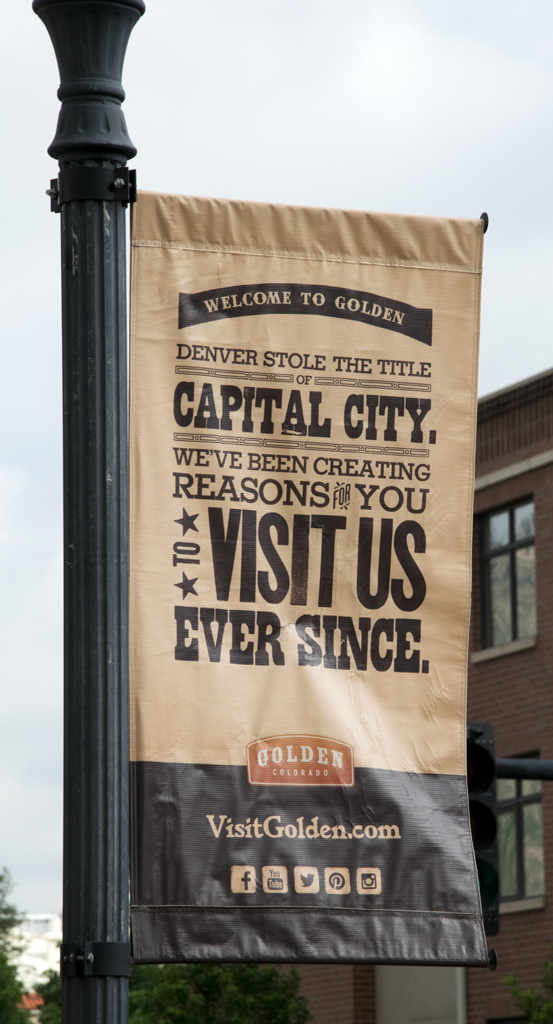 As I mentioned, Clear Creek runs right through the middle of the town. It used to be called Cannonball Creek because of the size of the rocks in it. I’ll remind you that Colorado is all about geology; you’ll see evidence of that again and again. Anyway, Golden City was the “last flat place” before the Rockies, hence many people there made lots of money supplying miners headed into the mountains. People seldom got rich mining for gold, but lots of money was made supplying those miners. 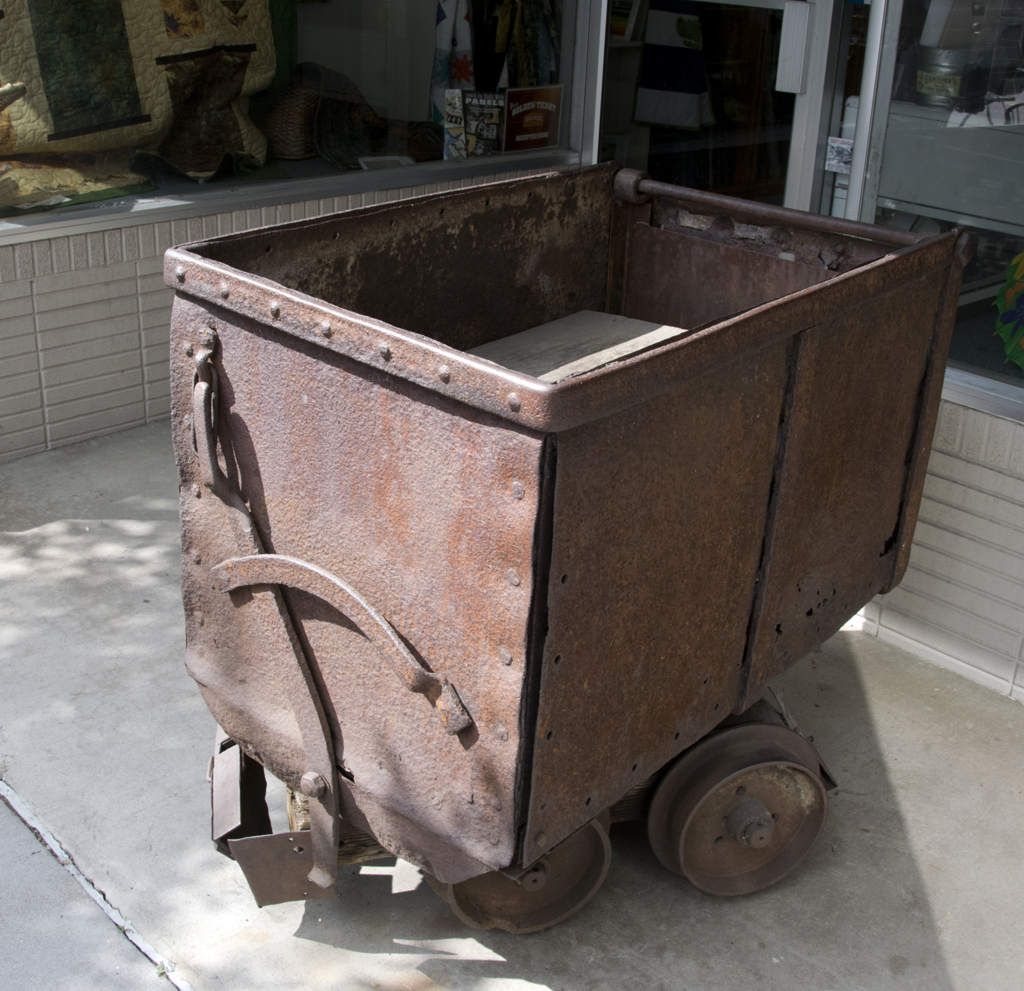 After the gold rush, Golden depended on agriculture (rich farm land and lots of water from Clear Creek) and industry, such as the aforementioned Coors Brewery, which made its appearance in 1873. 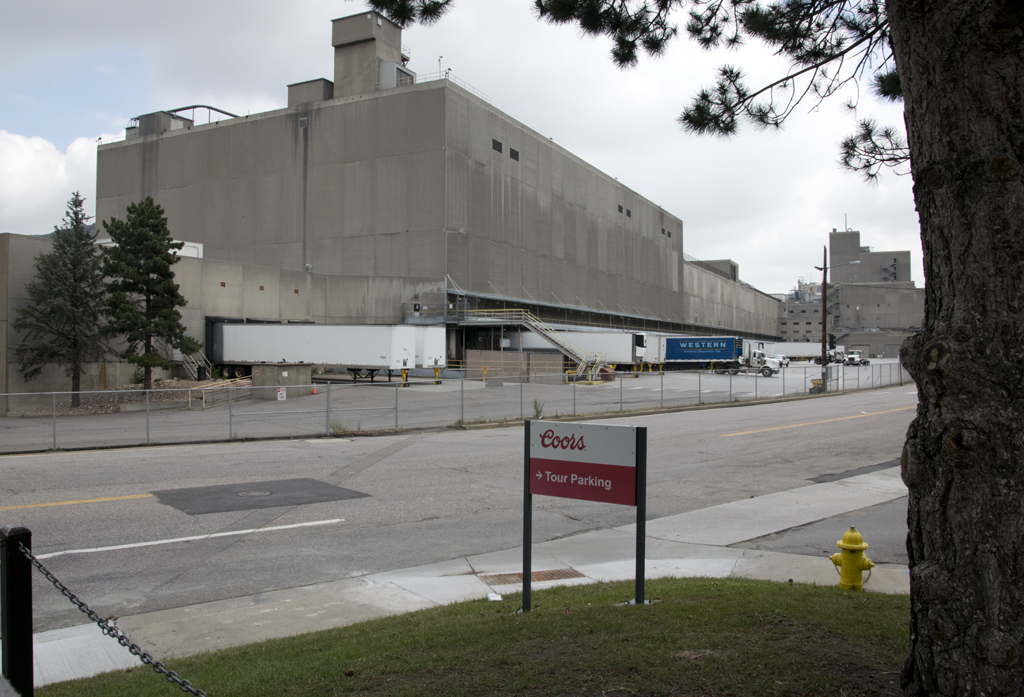 Today, Golden struts its stuff as a tourist mecca, as evidenced by the main drag, Washington Avenue: 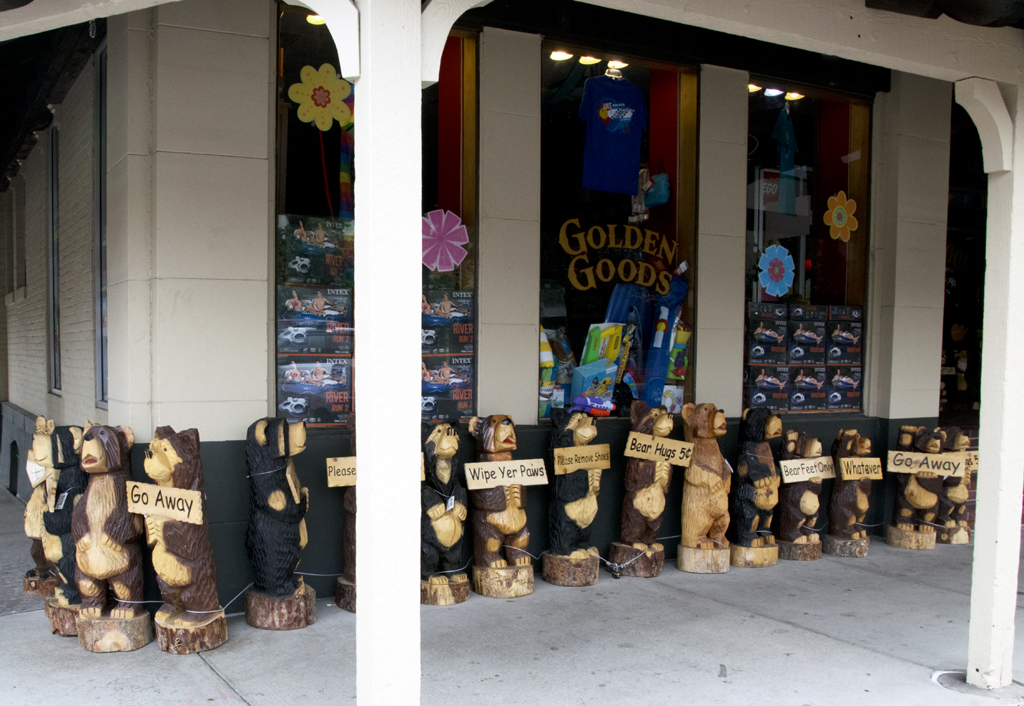 Did you know that barbers were surgeons in the past? 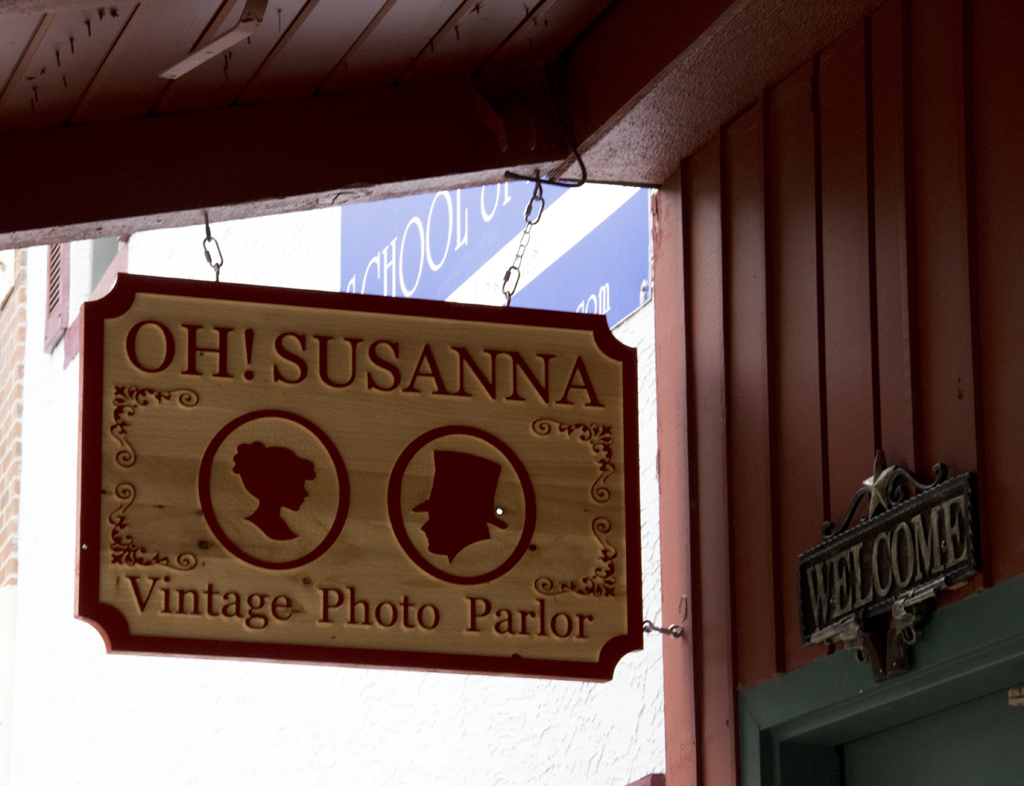 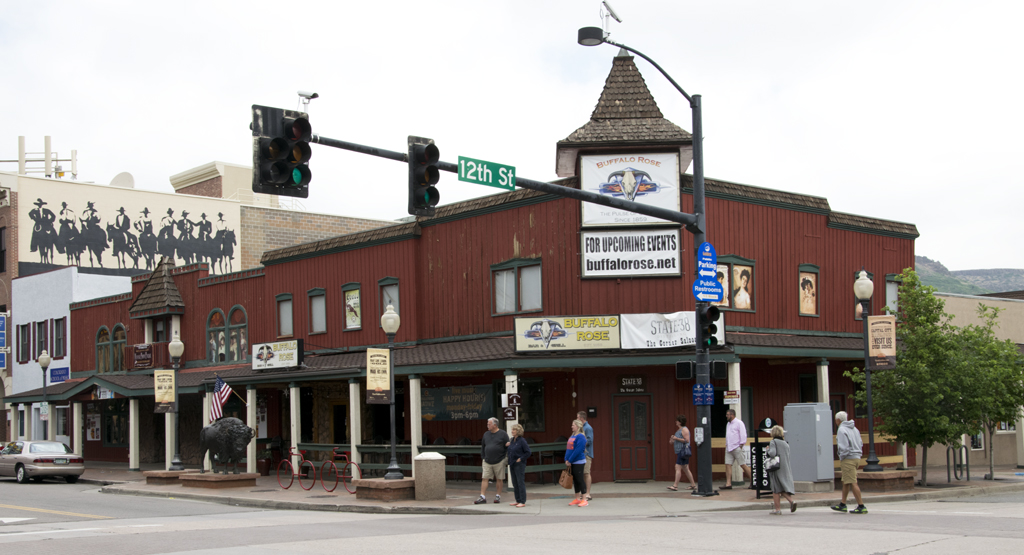 Golden has lots to look at besides the Old West feel of the place. They have public artworks, such as the big (and I can attest, hollow) metal buffalo in the above photo near the street in front of the Buffalo Rose bar. Also, there is a great cowboy fly-fisherman sculpture just a few blocks away: 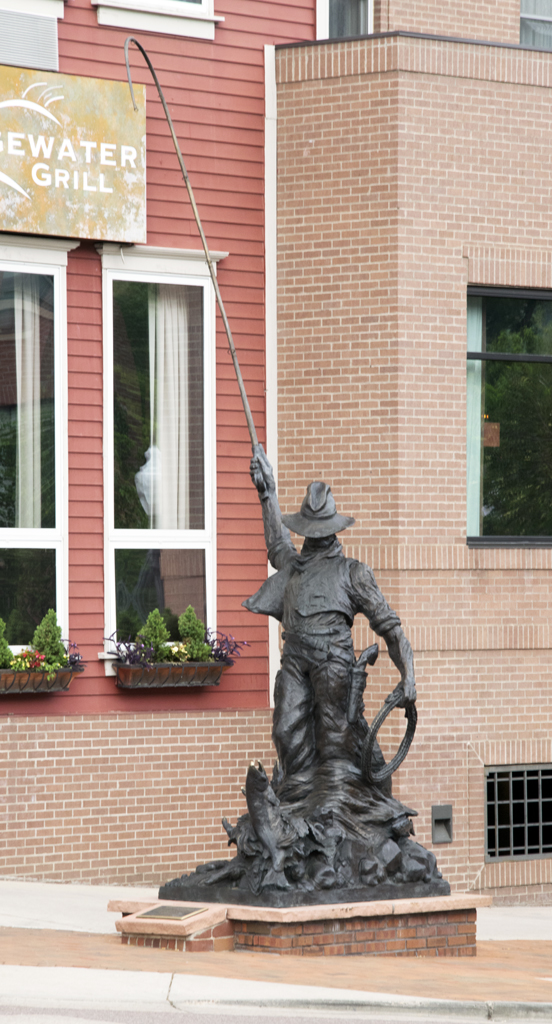 Golden is very walkable, with all the cozy bars, restaurants and shops within a few blocks of each other. Get there early for a parking space; it can be limited. There is plenty but you may have to walk (uphill) from your parking place. Another reason to get there early in the day is that the place becomes overrun with tourists by noon.

Golden is also home to the really, really well-respected-in-these-parts Colorado School of Mines, founded in 1870. Here’s a shot from the Coors Brewery tour, and I’ll post that in the future, don’t worry. But the reason for posting this photo now is because of the big M on the mountaintop. See it? It stands for the School of Mines. 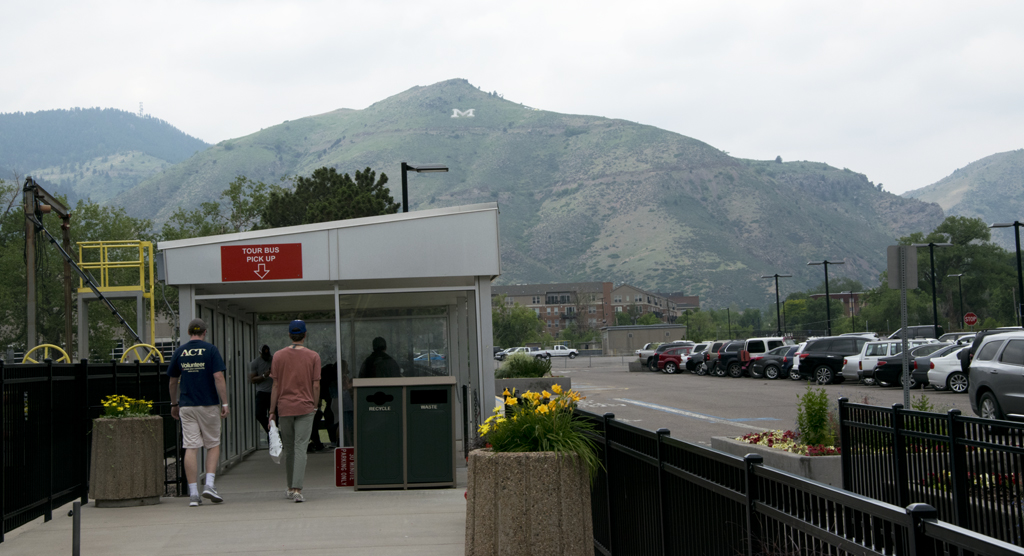 Each year the freshman class carries a 10-pound rock from their hometowns up to the M as a group. They all whitewash the rocks when they get there and add them to the M. Almost 1,400 freshmen will trek up the mountain this Friday! I think it’s on a road, but still!

But back to Golden. There is an arts center, historic homes and churches and a railroad museum. I’ve read they have a wonderful Christmas celebration as well as Buffalo Bill Days in July (didn’t make it this year but it’s on the list!). I’m quite sure there is much more than I saw the first time I was there. Don’t think it’s the last time, either! 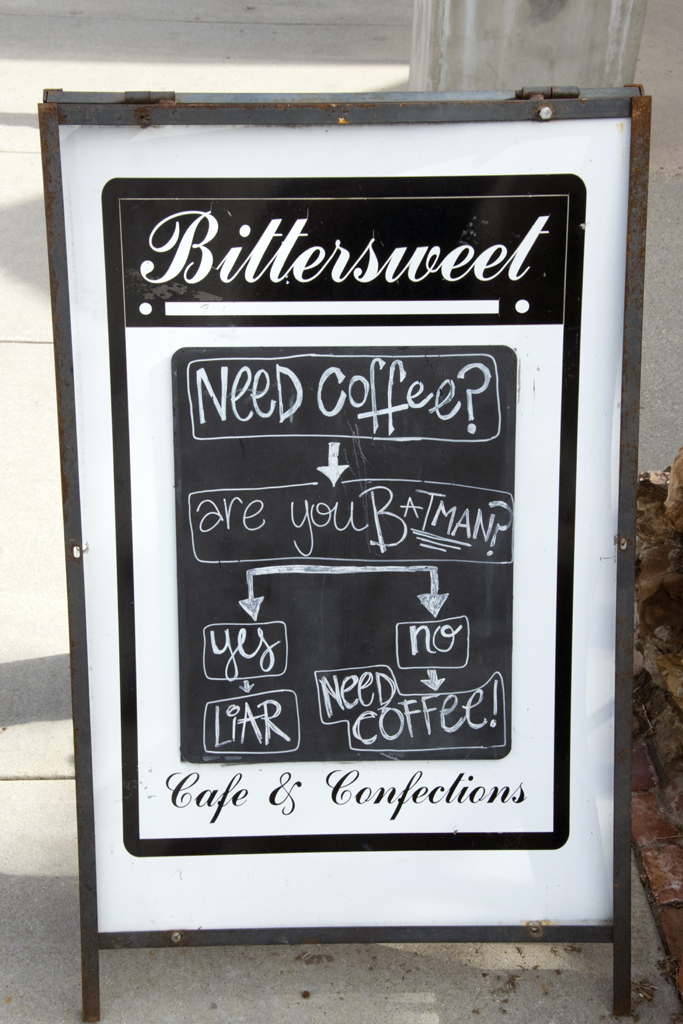 4 thoughts on “City of Golden, Colorado, at the Base of the Front Range of the Rocky Mountains”