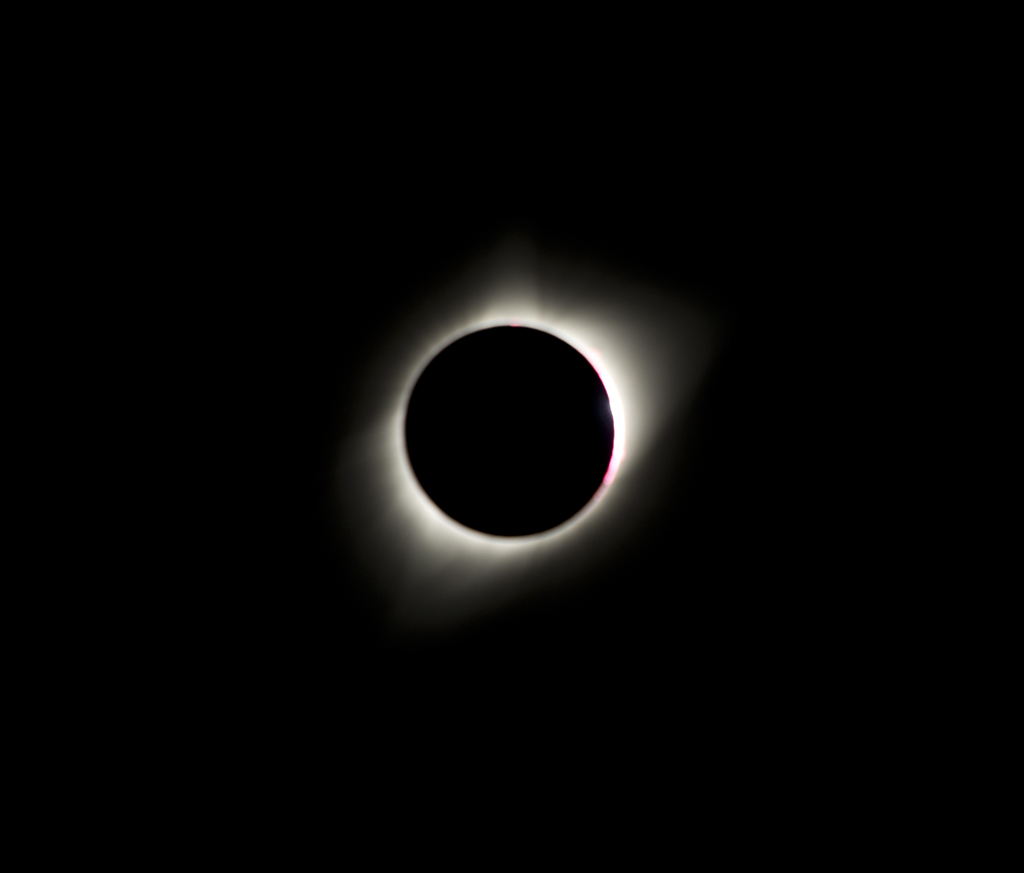 Only 1 week left on my summer book sale! Huge discounts on signed copies of my Photos for No Apparent Reason 2015 and my most popular cookbooks – shipping and taxes included in a price lower than Amazon’s retail number!

So I naively thought that I could just go online two weeks before the once-in-a-lifetime total eclipse of the sun and book a hotel room somewhere in the path of the totality. Wrong! The one room I did find was a couple of G’s, so that was out. However, I live only a few hours from said path, so fortunately a daytrip was not out of the question.

My husband was leaving on a business trip the same day, and I would have to drop him off at the Denver airport. His flight left about the same time as the total eclipse was projected to start in Wyoming. So he generously suggested I drop him off way early so I could get on the road to be in a good place in time.

So we got up at 4:00am that day and were out the door by 4:30. It’s about 30 – 40 minutes to the airport, and, after dropping him off and pausing at the cell phone lot for a final pit stop and route check, I was on the road about 5:30am. The beginning of the partial eclipse was to begin about 10:30am. I had five hours to make a normally three-hour drive. I was hoping I’d make it.

Since I-25 heads straight north from Denver through Wyoming, that was my planned route. I had very light traffic from the airport to I-25, but the volume was already building by the time I got on the interstate around 6:00am.

Note the brake lights and the line of cars: 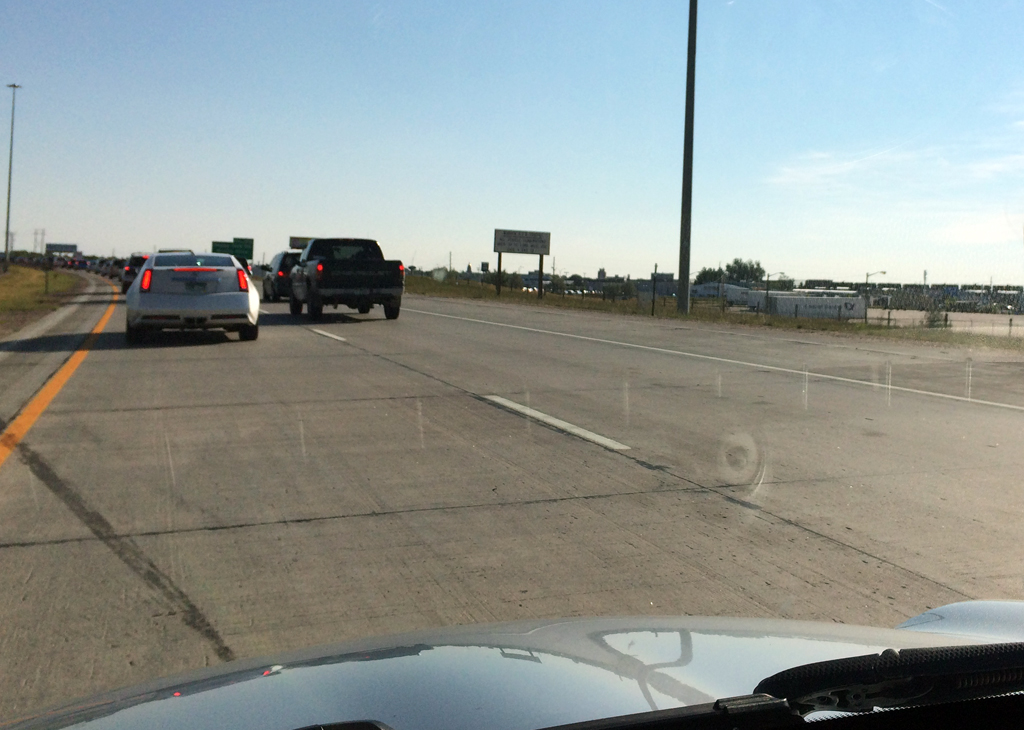 There were patches of smooth flow, but not consistently. I did see a hot-air balloon chase crew. The nearest pickup in the photo below had the giant fan and probably the envelope. The pickup in front of him had the wicker basket. Note the brake lights. 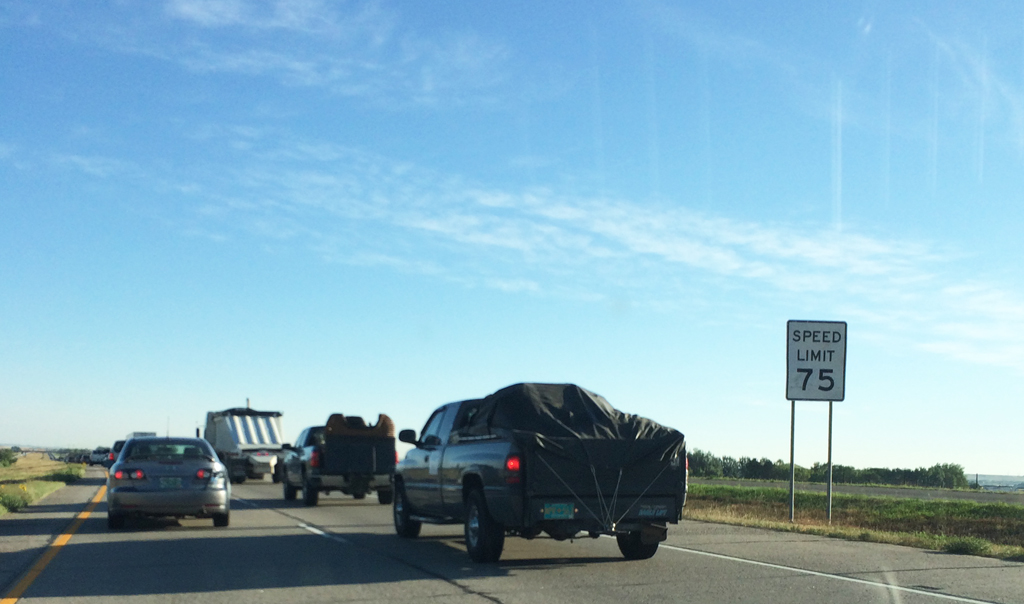 As I said, traffic was thick, very slow, stop-and-go. But there were very few occasions when it stopped completely, and even then just for a few minutes. I’d prepared for that anyway. There had been tons of warnings and cautions by the state police in the days leading up to the eclipse. I saw only one accident and a couple of people being stopped by police, but nothing major. There were lots of state troopers about, though.

I made the Wyoming state line about 8:30 – three hours to make an hour-and-a-half trip. My absolute minimum destination was Wheatland because the path of the totality started there. Denver airport to Wheatland is normally about a two-and-a-half-hour drive. But I knew that, the farther north I was, the longer the totality would last. So I was hoping to get well past Wheatland by 11:30.

At the state line I saw a magnificent buffalo standing on the promontory next to the Interstate. Turns out it was a giant wooden cutout! They got me! You can kinda see him in the photo below. Wish I had a better picture to show you, but the traffic had speeded up by then. There were cutouts of cowboys and such further on, but I was onto them by that time! 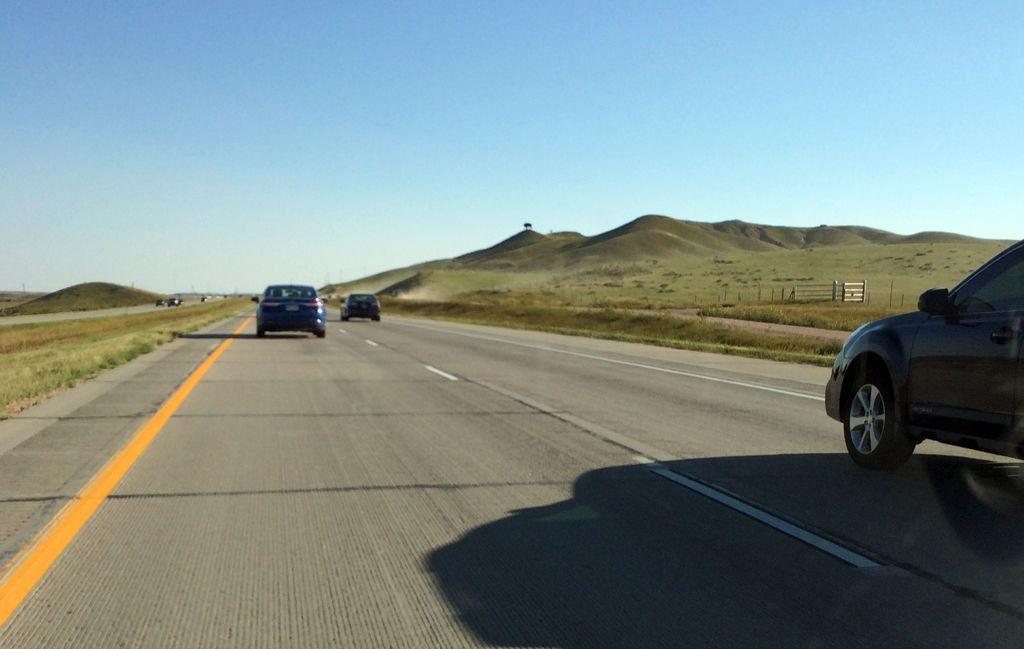 There was a whole herd of actual buffalo grazing by the road just beyond the wooden one. You can kinda see them as dots in the photo here: 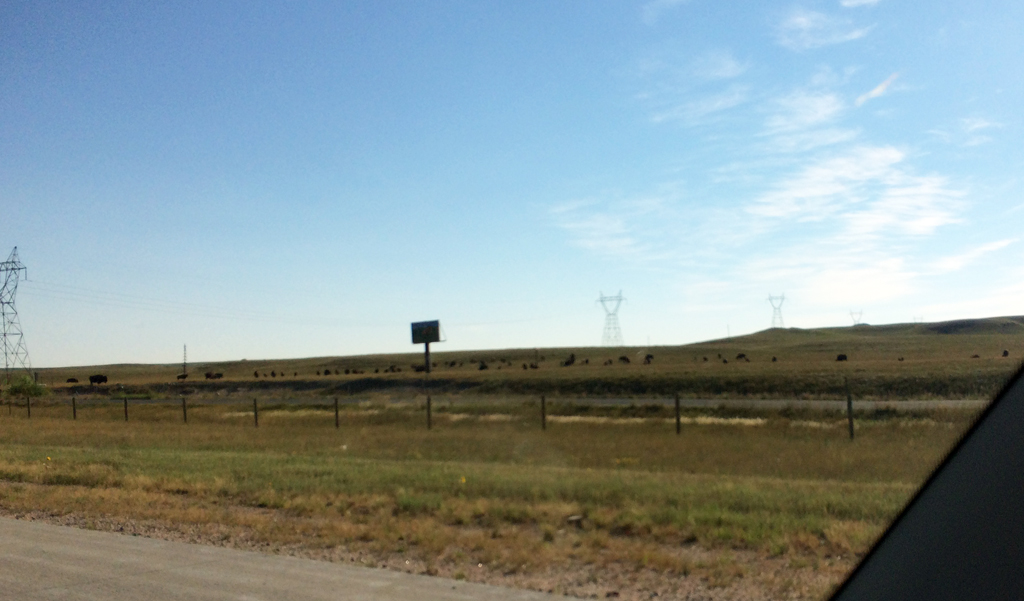 I don’t think it was an accident that they were there for us eclipse chasers!

My next pit stop was at the SE WY Welcome Center, about four miles into the state. It was very crowded, but the line to the restroom moved pretty fast. 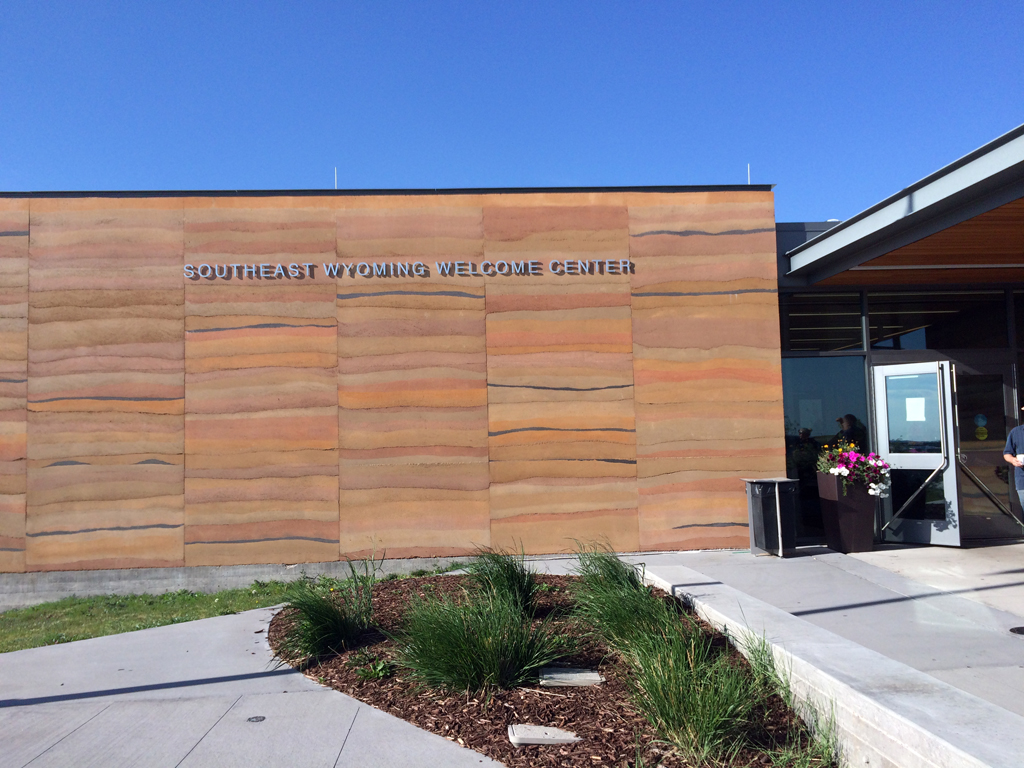 They had this sign in the lobby, probably for the thousands of selfies being made beside it! 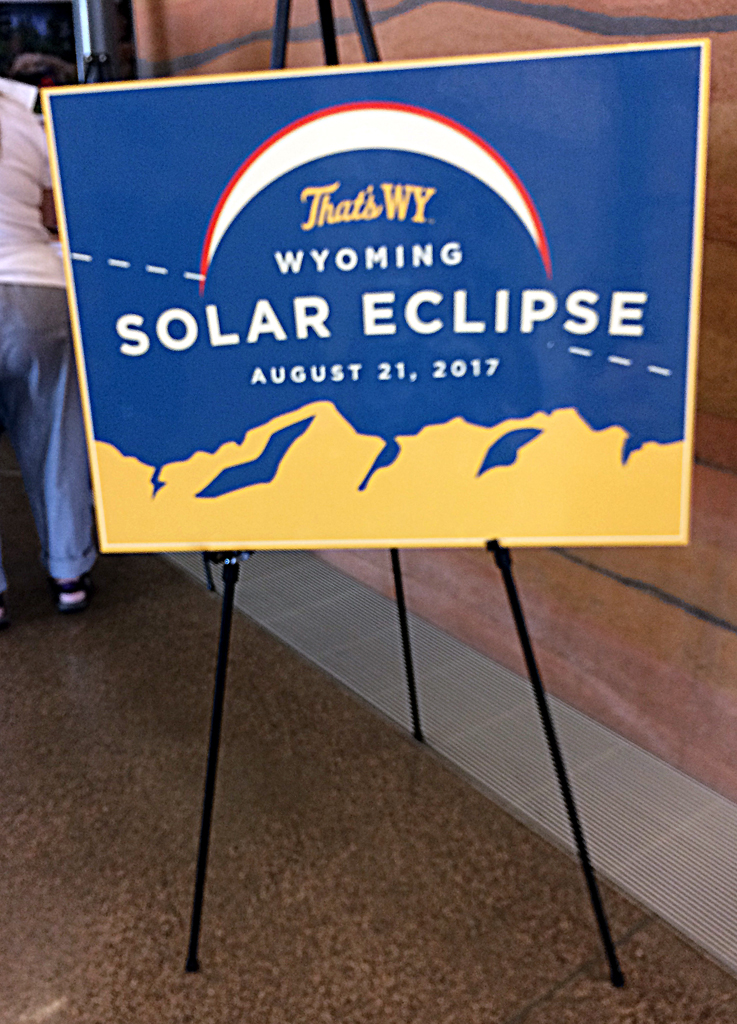 Gotta love a state whose tourism motto is “That’s WY”.

My next stop was just before Wheatland. I pulled off in a line of traffic to the exit and ended up at a gas station. There were local police directing traffic and I just drove to the pump with the rest. I didn’t really need gas, but I filled up anyway. I didn’t know what supplies would be like on the way home. They gouged us a little bit on the price, but it was hard to tell how much because everything is so remote. It might normally be higher. I didn’t like the surroundings – no place to watch because people were already everywhere, tailgating the eclipse – so I got back on the road. It was about ten minutes til ten.

I drove for about another half hour then spotted a rest stop called Dwyer Junction. I’m so lucky! I pulled off and quickly took a spot on the longish exit ramp where lots of people were already set up. The embankment next to my car faced the sun, so that was lucky, too! I immediately spread out the picnic blanket, got out my cameras and water bottle, sat down and put on my eclipse glasses. The partial had just started! It was 10:25am. On the road almost five hours exactly!

Since I had over an hour to watch the partial before the totality started, I had lots of opportunity to take some photos. Here’s what lay before me: 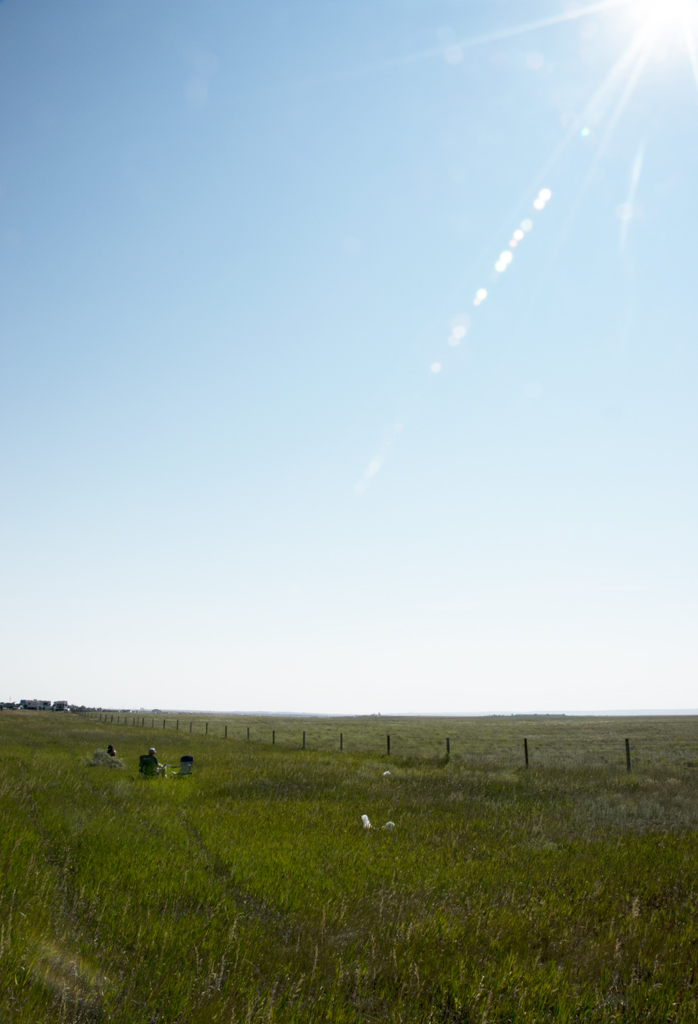 And a shot a little to the left to show you how many cars were lined up along the road where I parked: 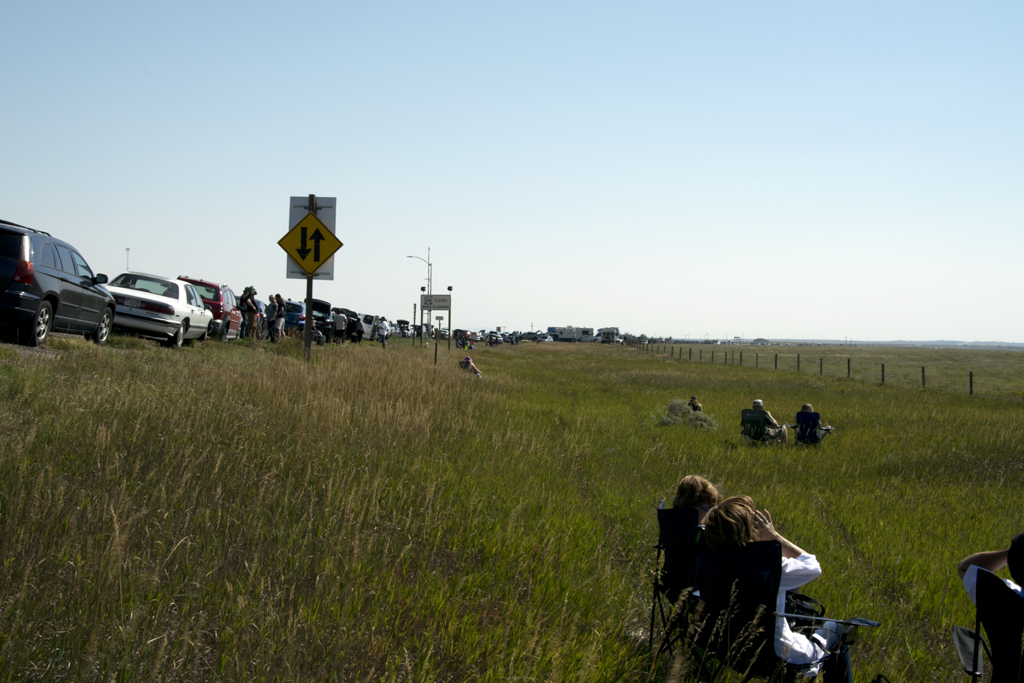 The people in the foreground had driven up from Colorado Springs, even farther than I’d driven.

People kept coming! It wasn’t long til there were no more spots on my side. 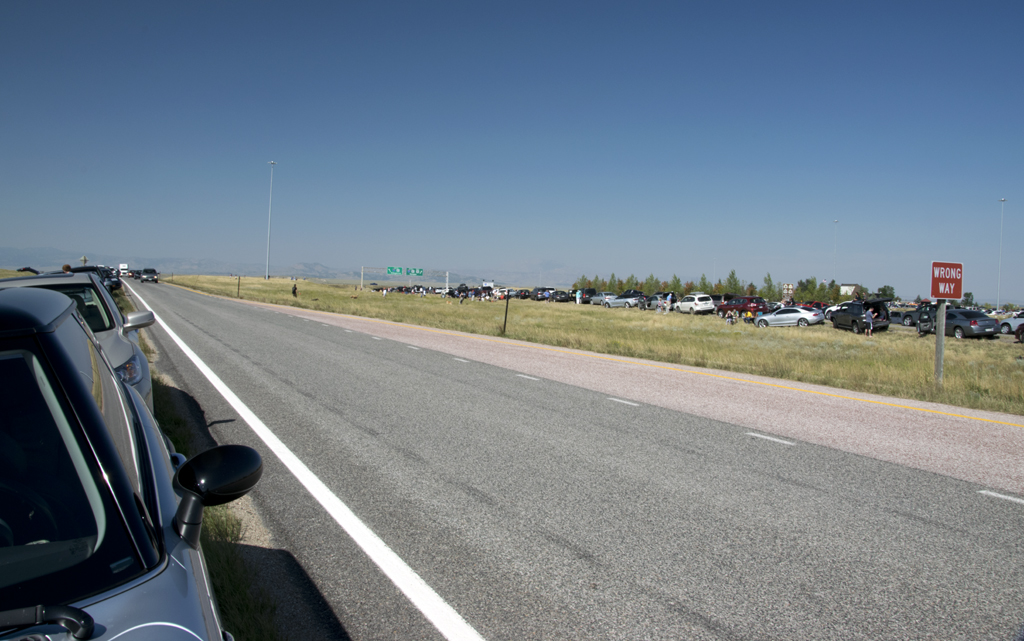 Then the other side of the road got filled up. The rest stop parking lot was already full of RVs when I arrived. I think they’d camped out there all night. 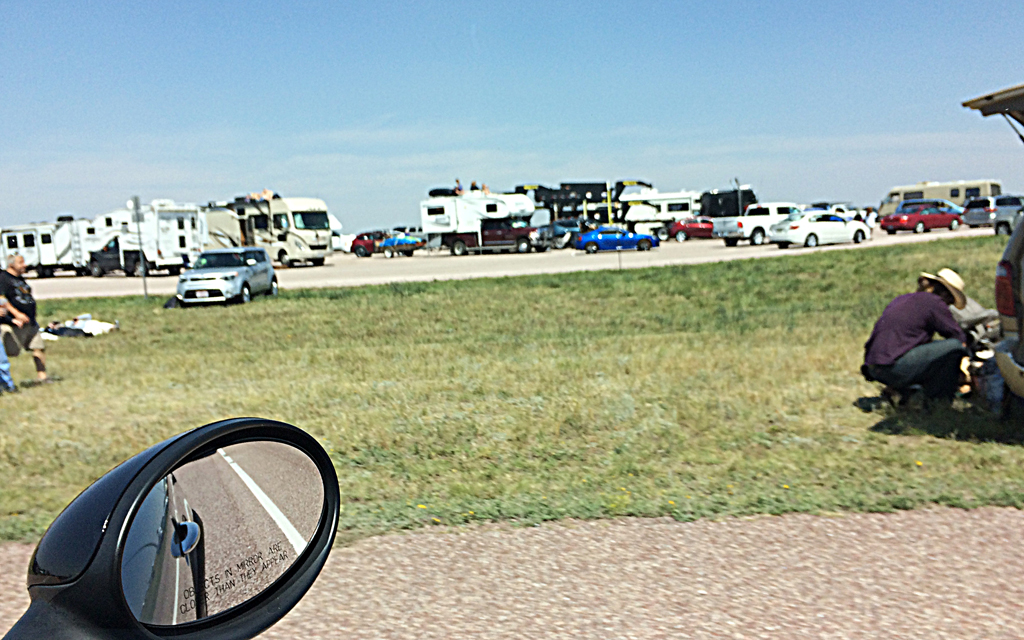 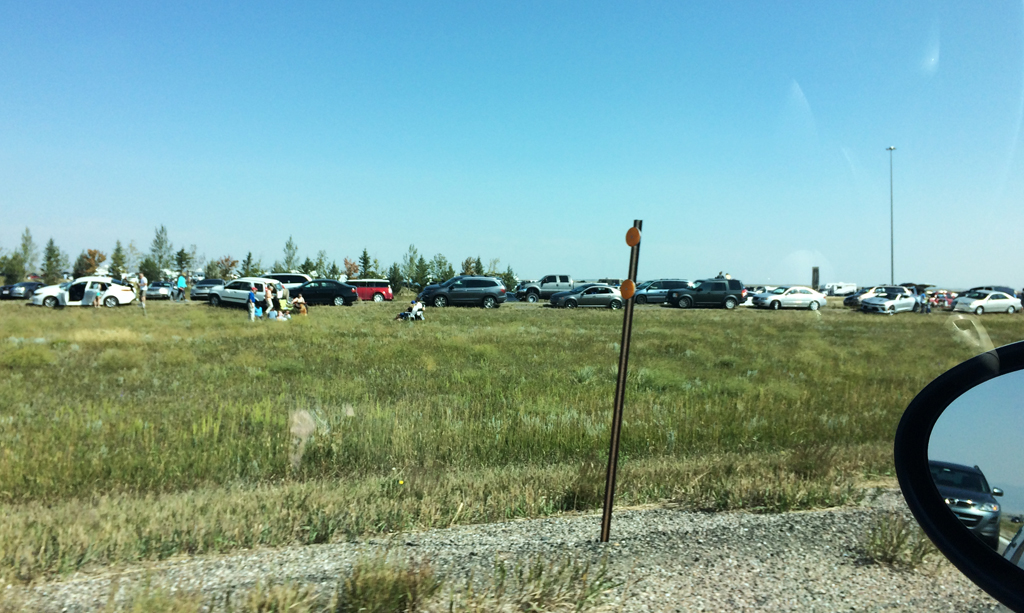 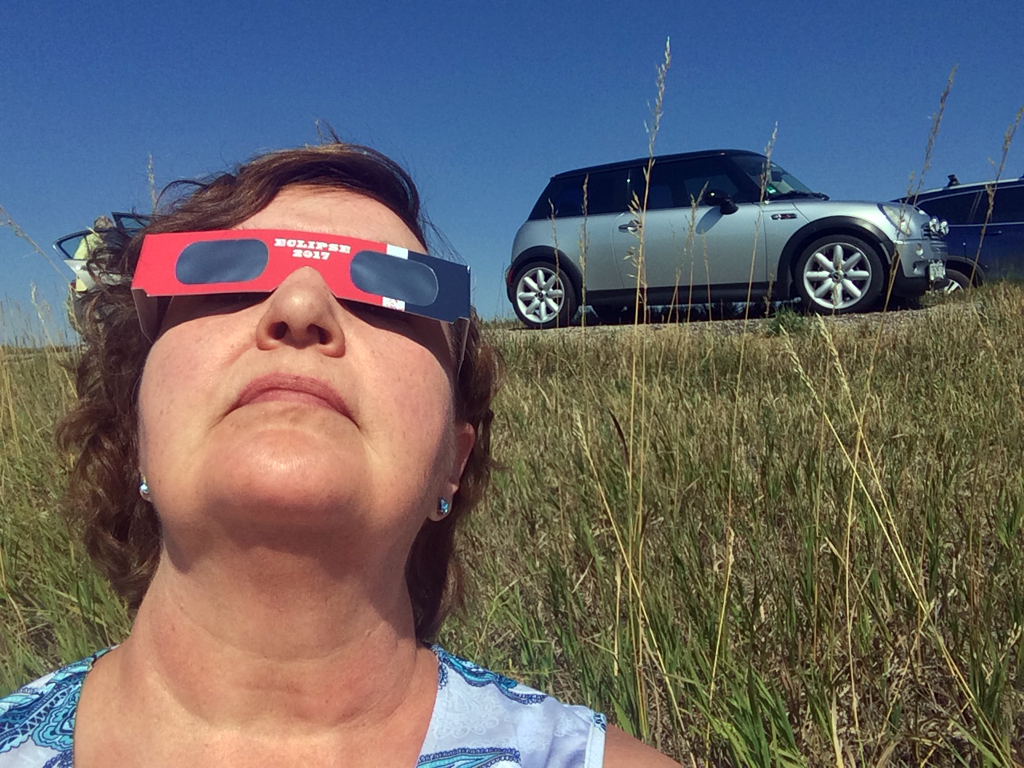 Yep, still got the sunburn!

People were so excited and happy! I have so many good people shots, but this is probably my fave: 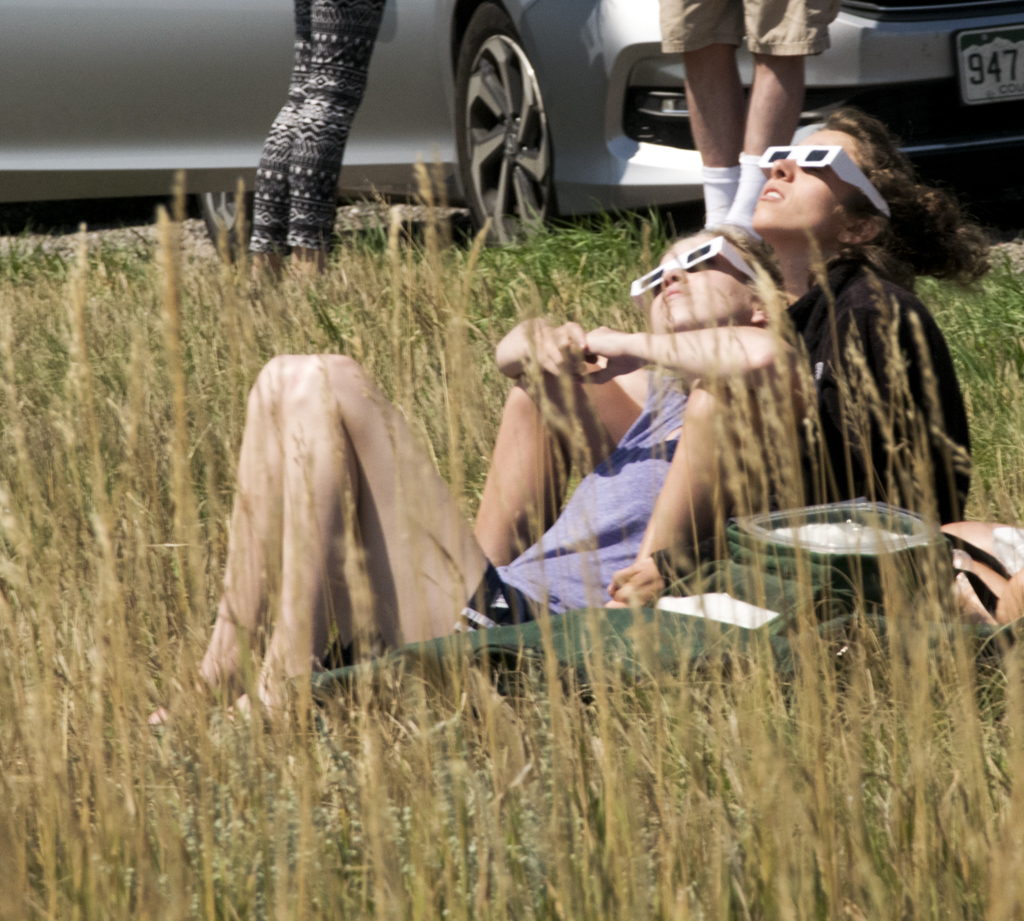 Off and on, I tried to get a good shot of the sun with my camera. I wasn’t there for photos really, because I knew the totality would be so fast and I wanted to experience it in person, not behind a camera. But I had some time, so I tried maxing out the manual settings on my big-dog Nikon. For you photo gearheads, the setting was 1/8000 at F32, but it still blew out the photo. Way too bright, even at that speed. You should have seen me trying to focus with those eclipse glasses on! Couldn’t see a thing except for the sun’s disk through those things.

Then I tried putting the eclipse glasses over the lens. This is as good as I got, which was better than just a white frame, I guess: 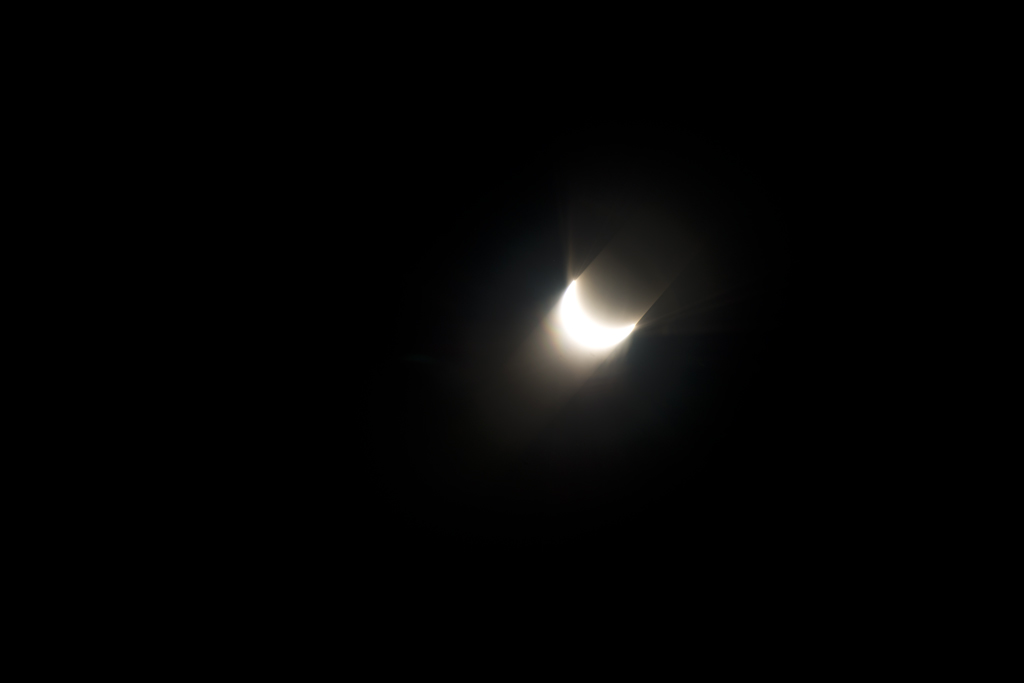 But I knew that astronomy pros somewhere were on the job, so I didn’t worry too much about it.

As the moon traveled across the sun, it began to get very chilly out there on the plains! It was windy the whole time, and the wind got downright cold. Then the light began to dim and that eerie yellow fell over the land. It was almost the total eclipse!

About that time, people started cheering and applauding. I took off my eclipse glasses and caught my breath! I was seeing a total eclipse for the first and probably only time in my life! It was truly breathtaking! I even got a little choked up. I managed to switch my camera over to the auto program and snapped this pic: 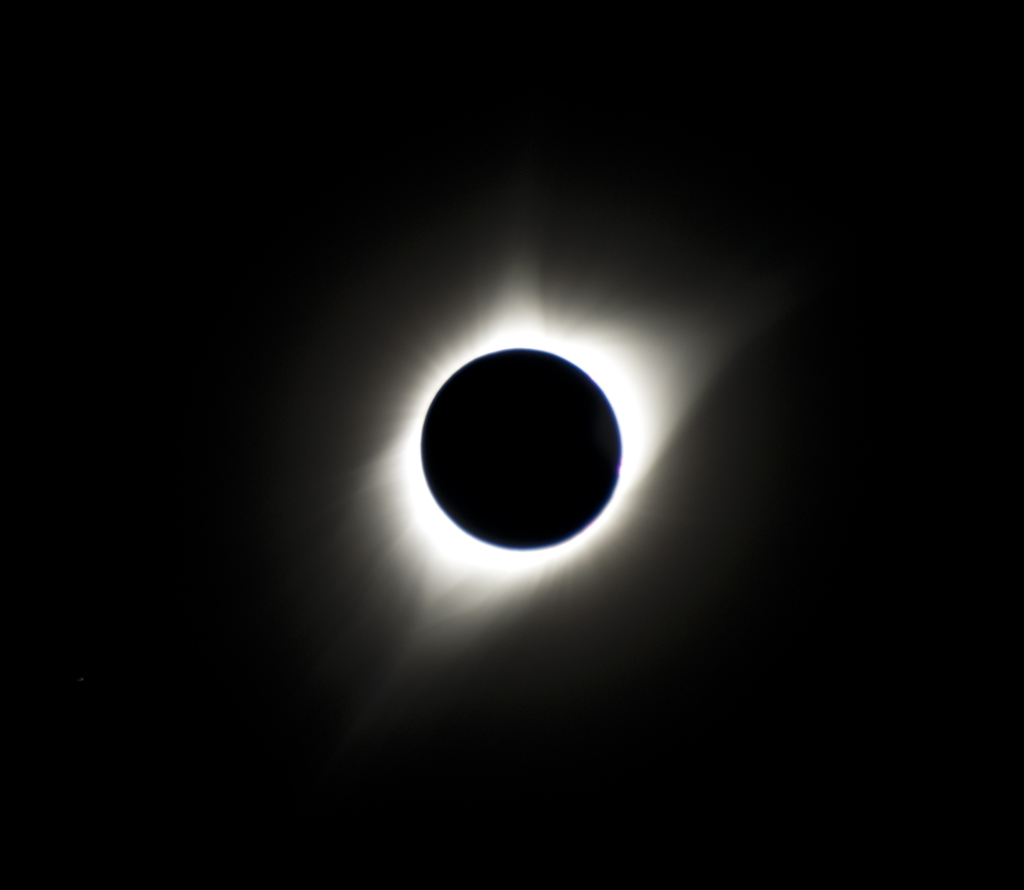 And I got this one of the car at maximum totality: 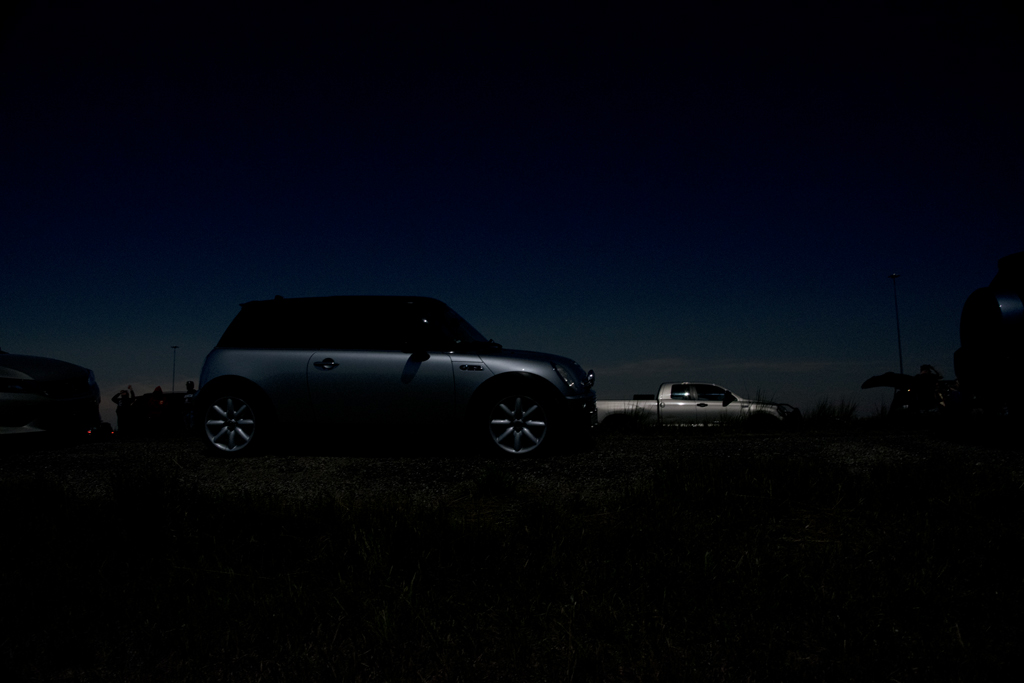 But mostly I just gawked. I think I held my breath the whole time. Amazing.

And just like that, it was over. The totality had lasted only about two minutes where I was. I had driven over five hours to get there and was facing another long drive home. All for just two minutes. Totally worth it!

I was surprised that people immediately got into their cars, started them up, pulled into the road and then had to sit there for about an hour before traffic moved anywhere. And the second partial eclipse phase wasn’t even over! I stayed for it, of course, thinking that the longer I waited the better the traffic would be. Not really.

Anyway, I wandered over to the restroom, did some people-watching and generally hung out for about an hour. When I got back out onto I-25 around 1:00pm, I found more heavy traffic. Brake lights: 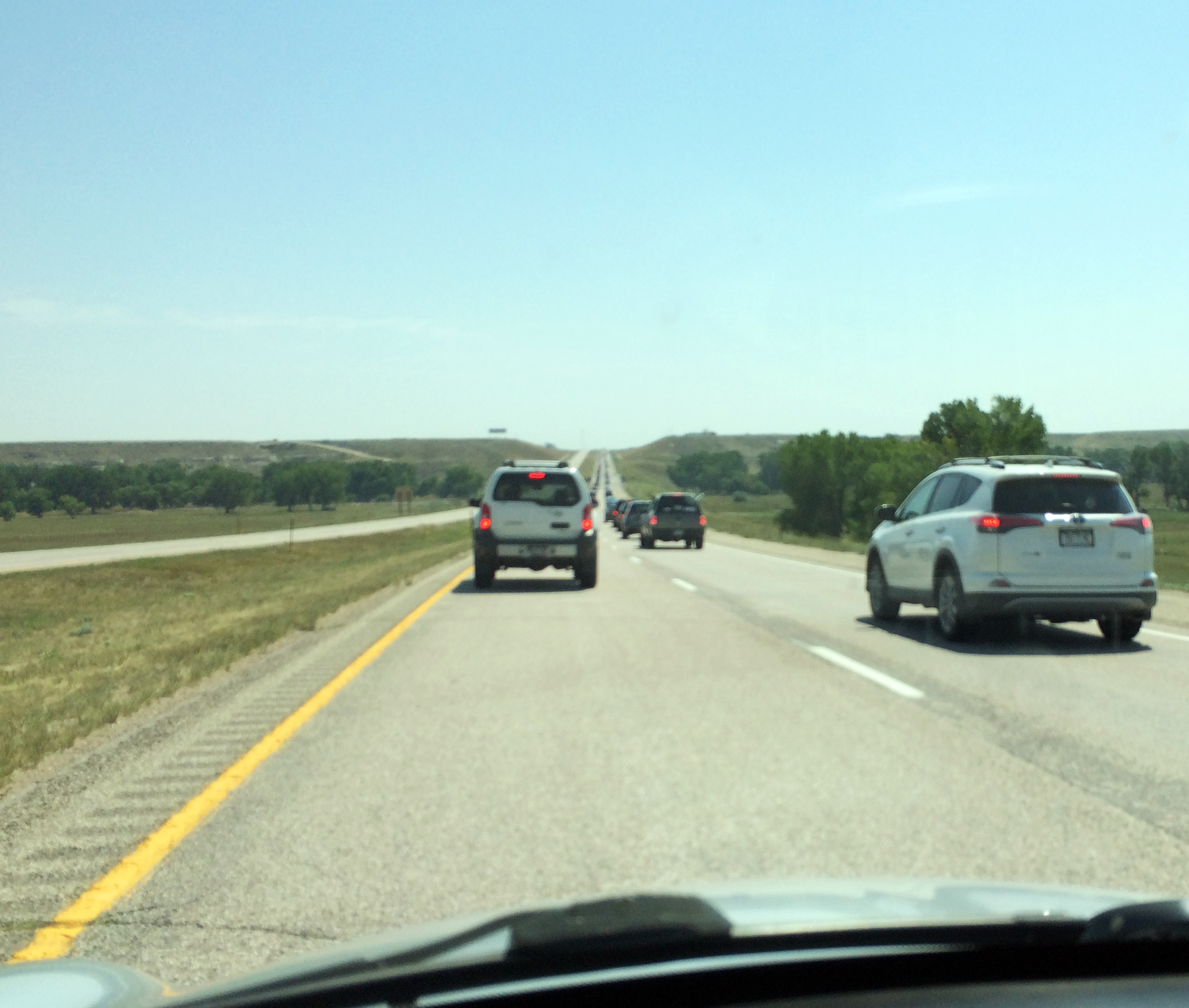 I next stopped in the oh-so-charmingly-named town of Chugwater! It was here I got the fantastic idea (not) of trying an alternate route. So I headed out Wyoming 313 dead east. I was stopped by a train before I even got out of town! 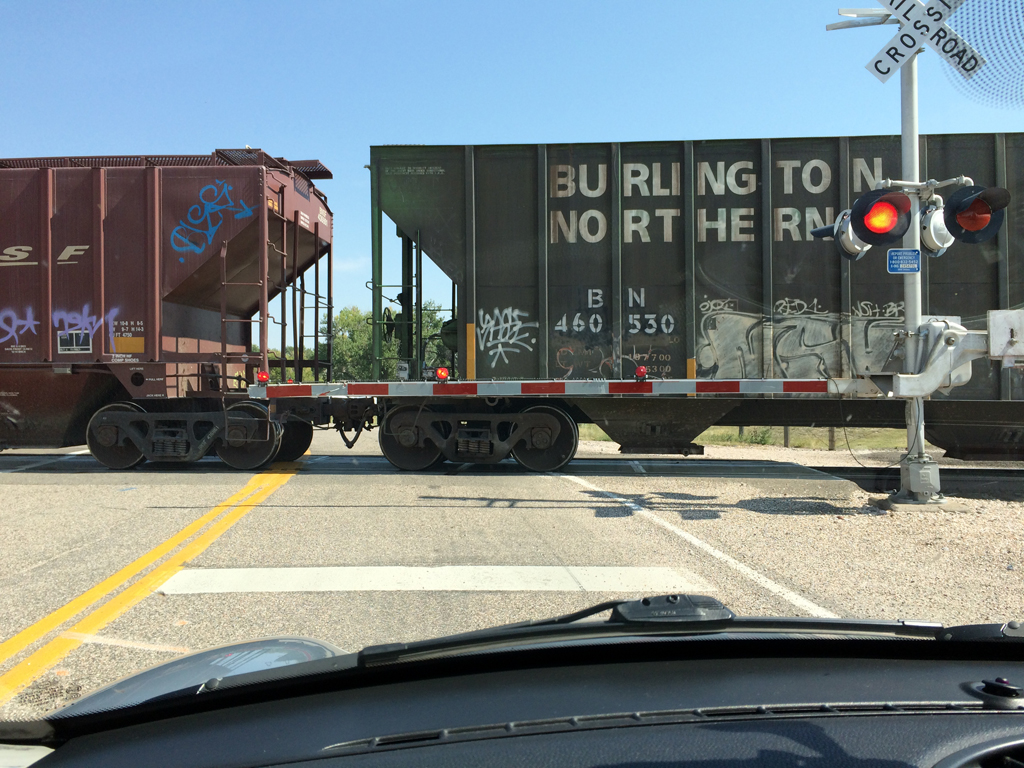 It took about 30 minutes to get to Highway 85, which would take me into Cheyenne. There wasn’t much traffic east/west. Here are some photos that sum up the route and Wyoming in general: 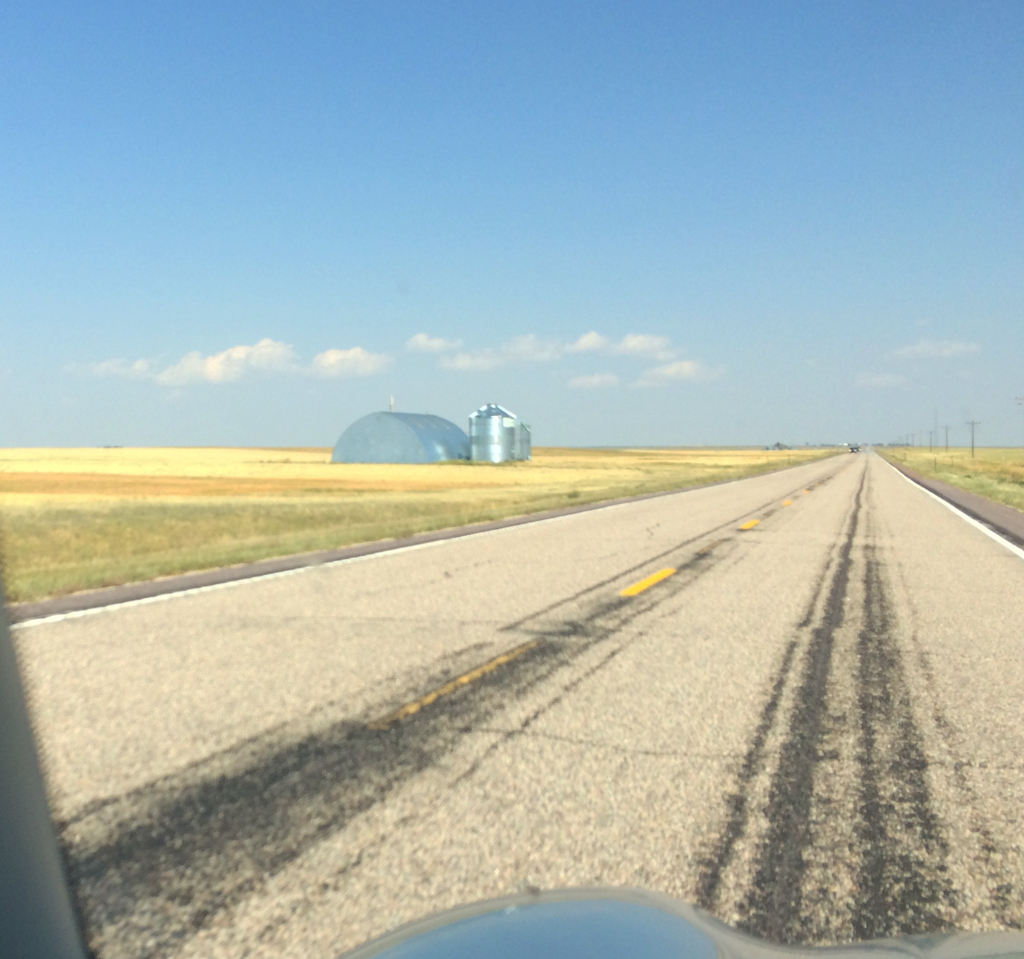 There were some very cool limestone cliffs: 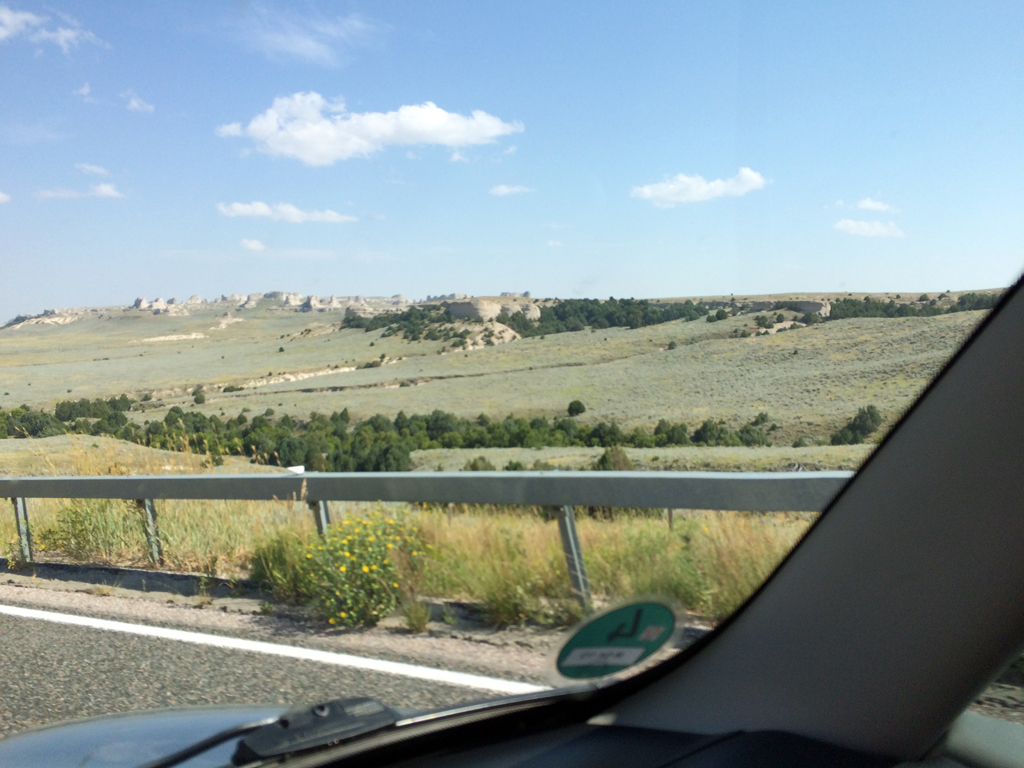 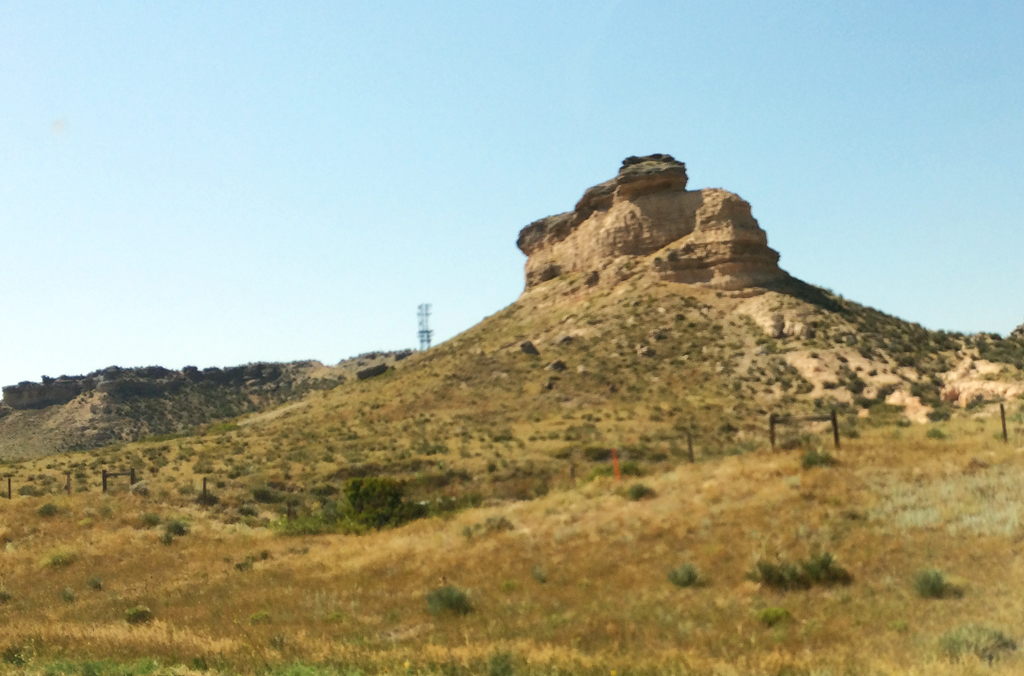 And lots of sunflower fields: 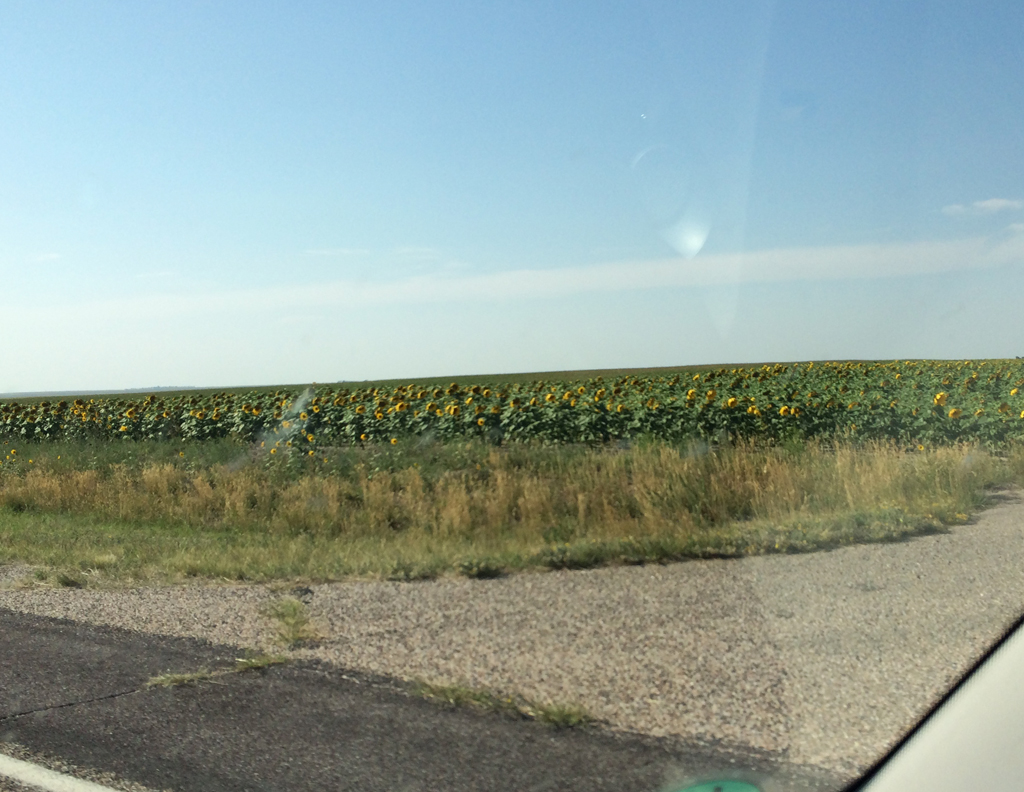 When I got to Highway 85, I spent about 10 minutes on that bumper-to-bumper stop-and-go (mostly stop) traffic before I knew I had to either kill myself or backtrack to I-25. In those 10 minutes, I’d traveled only about two miles. So I backtracked. It added an hour and some change to the trip, but I’m glad I saw the backroad. Wyoming is raw and beautiful! I can imagine the windy snowstorms they have in winter.

Back on I-25 it was stop-and-go, but much faster. I took my time, stopped a lot, and enjoyed myself. I arrived back home about 9:00pm. Writing about it now, I realize it didn’t seem like such a long day because of the anticipation going up and the exciting memory coming back. But what a marathon! And for only two minutes of eclipse. Totally worth it!

It has been a long time since I had a road trip like that, and I’m so happy with the way me and the car performed. And now I can say I’ve seen a total eclipse of the sun! Yay! 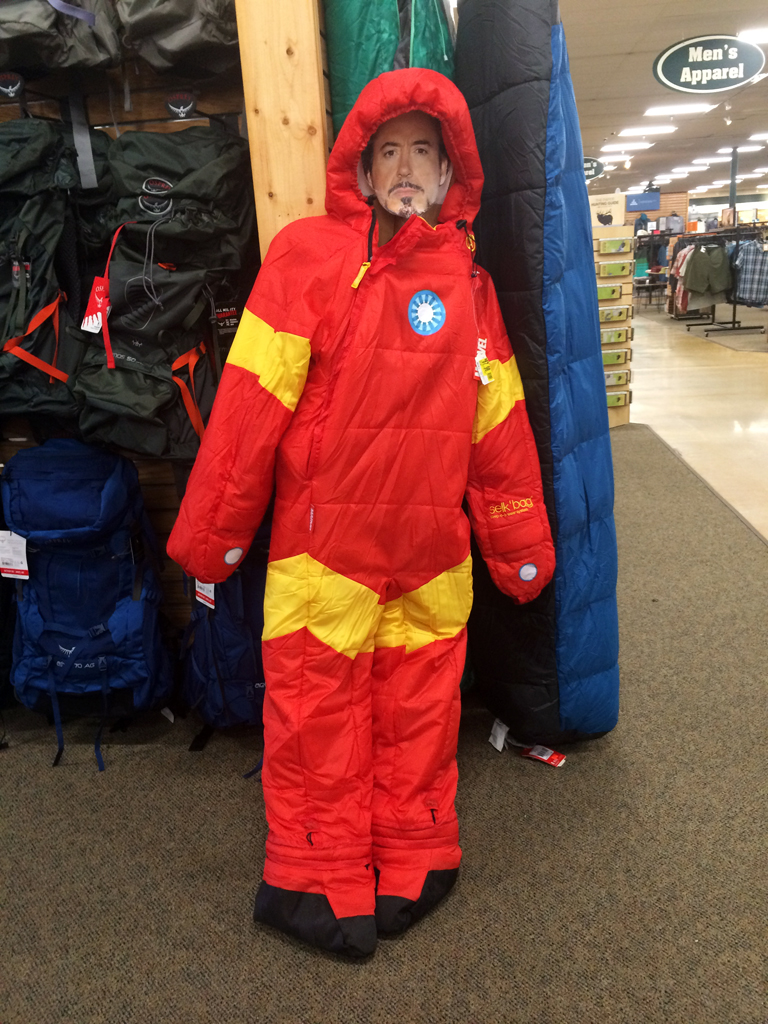