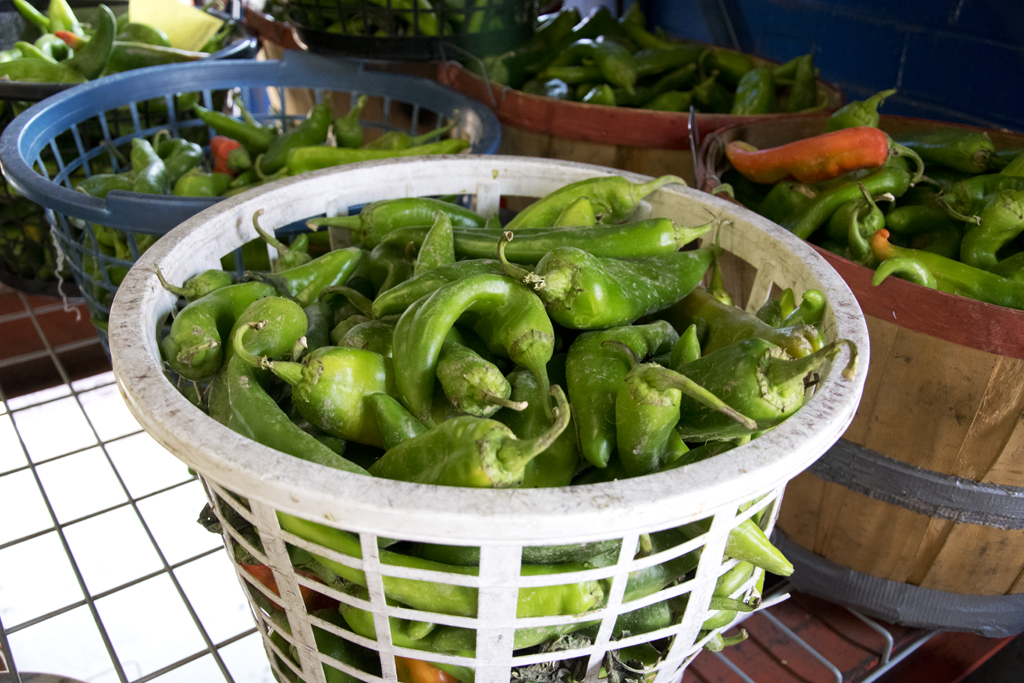 Back in my ancient history when I was traveling as part of my job as IT systems engineer, I had a client in Santa Fe, New Mexico. The first time I went there I remember renting a car at the airport and driving to my hotel. Stepping out of the car at the hotel, I smelled the most amazing aroma, something cooking, but I couldn’t place it. I’d never smelled anything like it. I asked about it in the hotel and they told me it was the aroma of Hatch chili peppers being roasted across the street at the supermarket.

Well, you know I had to head right over there to check it out. People would buy a burlap sack (gunny sack where I come from) full of chili peppers and a couple of guys would roast them in a big steel-mesh drum that rotated, tumbling the chilis over some flame jets, charring the skins. The aroma that lifted off this operation was magnificent: smokey and spicy with heat and green savoriness.

I was told that people bought a year’s worth of these chilis at harvest time, had them roasted, then put them in the freezer, using them up by the next fall. Of course I couldn’t buy any myself because I was in a hotel and couldn’t transport them home. But I lived in Florida at the time, and after that in Europe, so I never got to take part in this tradition. Until now!

Last week my husband and I went to The Chili Guys in Denver. We’d noticed chili vendors/roasters popping up on corners in the area and knew it was chili season. I did a little research and discovered that The Chili Guys are open year-round, but, of course, didn’t have fresh chilis except this time of year. You can always buy canned or frozen chilis, but I wanted the fresh ones. 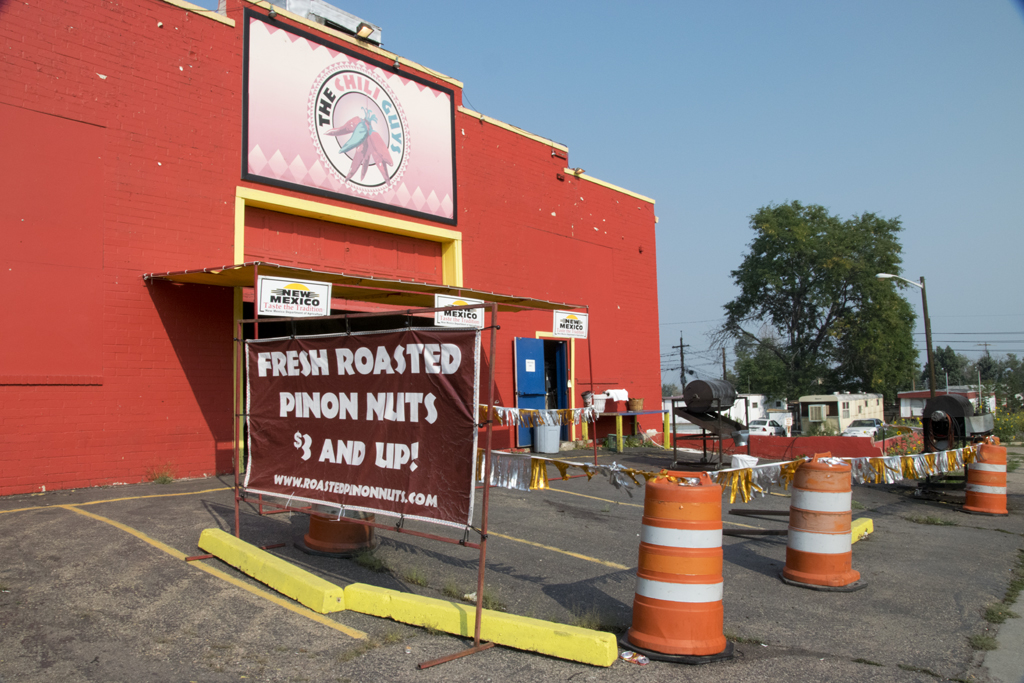 Just as many places around here do, the store looked like it was fashioned out of an auto body shop. You can see the garage door below the sign in the photo above. And, sharing the building with it is a fireworks store. The place was lined with chili products: jams, jellies, salsas, sauces, as well as dried beans, rice and pickled things… 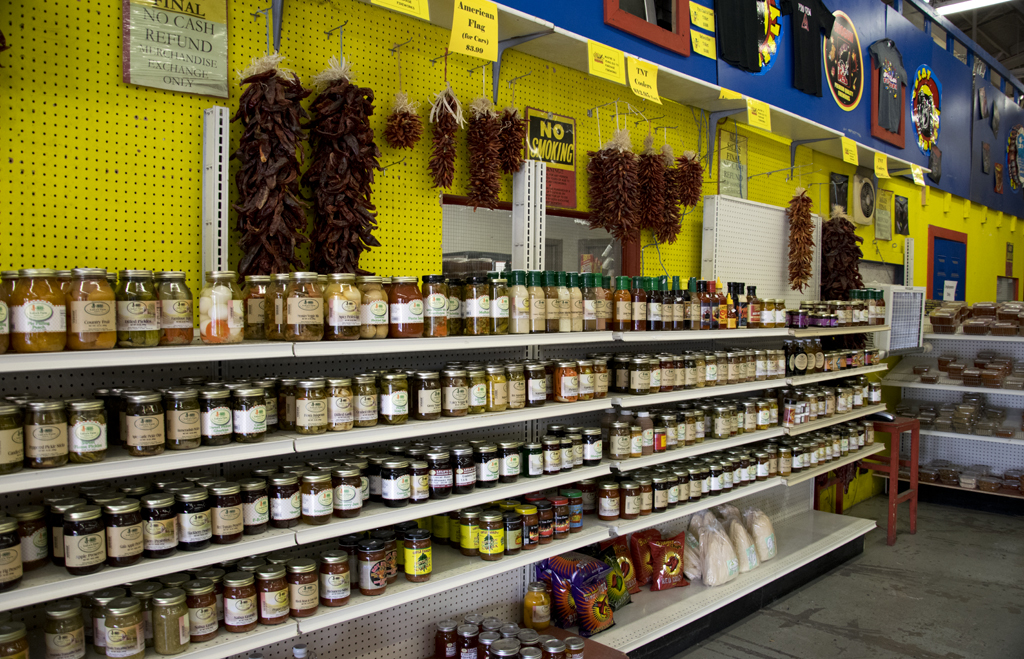 And more than a few dried-chili and spice products: 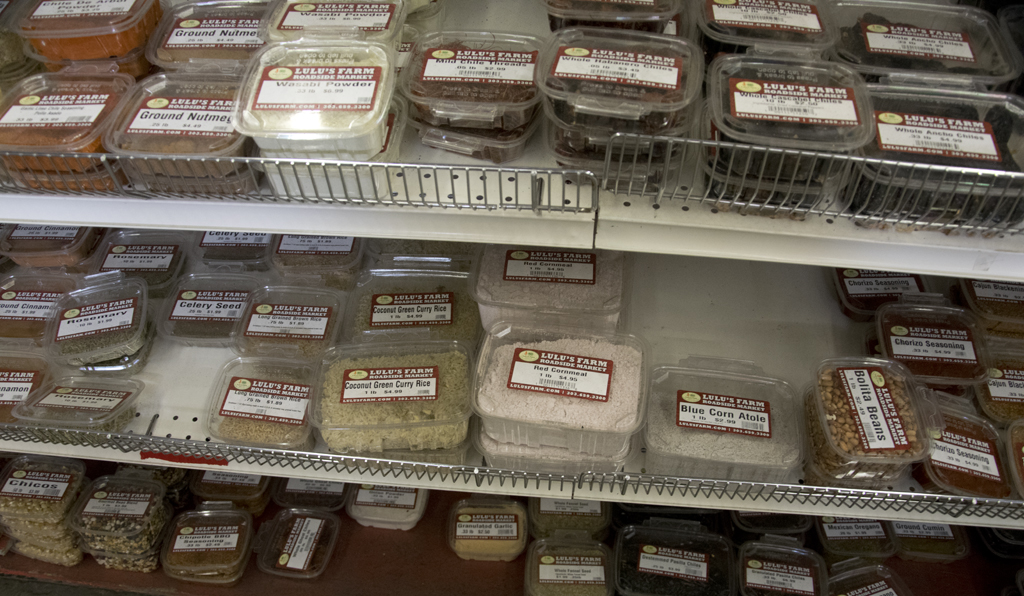 Notice the brand name on those: Lulu’s Farm. Matter of fact, I visited Lulu’s just today – it’s about 25 minutes away from where I live. So look for a blog post about them in the future, too.

The Chili Guys was bustling, even at an early hour on Sunday. Of course they had fresh chilis! In the picture below is a bushel of Hatch chilis, the main attraction.

Of course they had many other types of peppers, too, such as this one I didn’t even dare to walk close to!

People there thought I was a little crazy, taking lots of pictures and just generally delighting in the experience. Oh well, I got my pix, right? The main photos I wanted were of the roasting process. The woman doing the roasting was one of the hardest-working people I’d ever seen, and she wouldn’t show her face for a photo. First she lined up the orders behind the roaster: 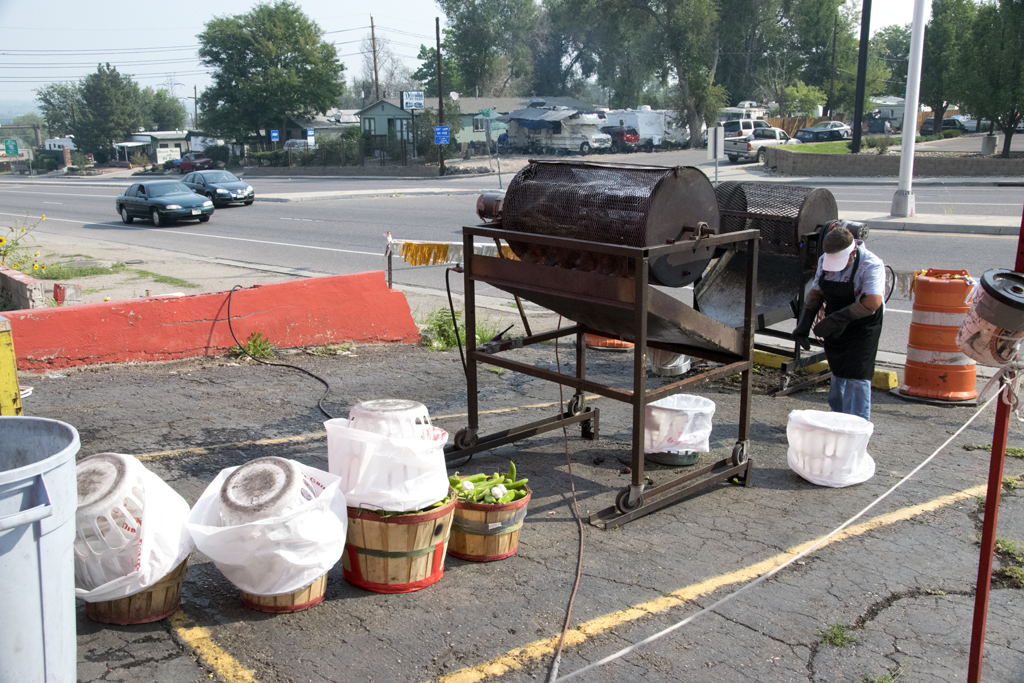 Each in turn got it’s ride in the big roaster, and the smell was incredible! Check out the eight flame jets under the drum – I believe it’s a propane burner with an electric motor to rotate the drum: 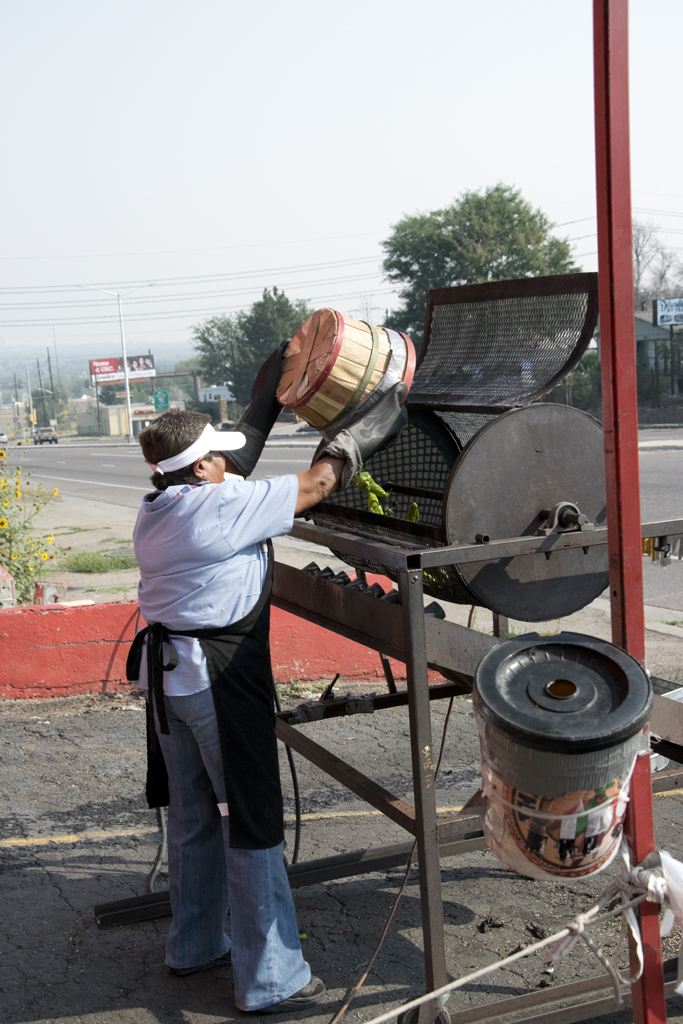 In the above picture you can see how white the sky is. That was from the wildfires burning in the Rockies, California and Oregon. It hung in the air for a couple of weeks til a front moved through two days ago and blew it away. We couldn’t see the mountains during that time.

After a few minutes, Ms. Roaster would turn off the flames and rake the charred chilis out the other side into a plastic bag: 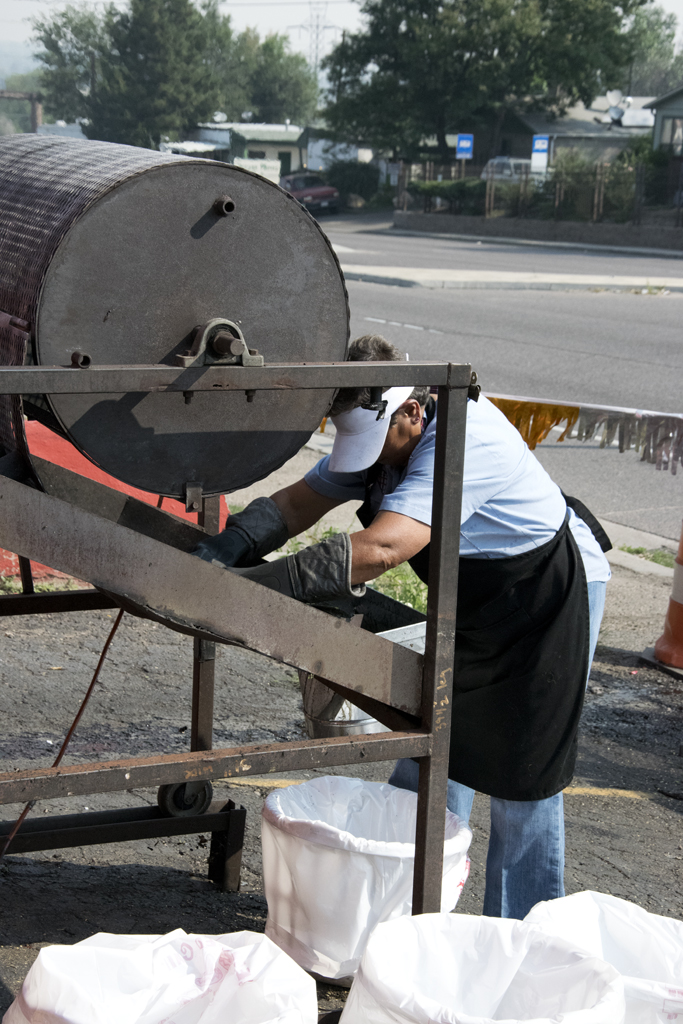 Then she’d tie up the bag, call the order number, and hand it to the customer. Here’s ours: 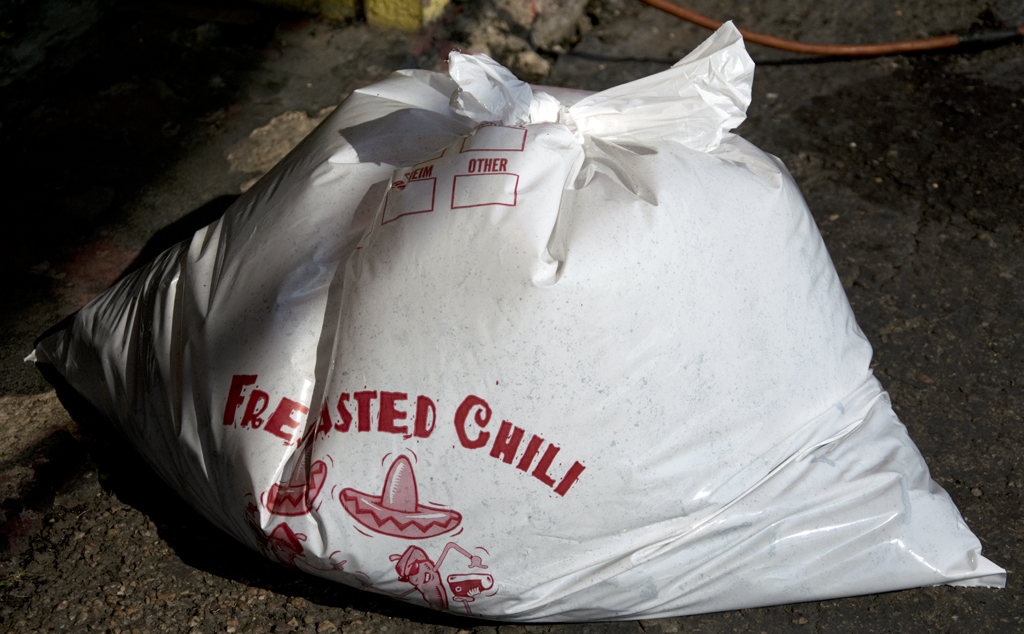 It’s important to put them into a sealed bag while they’re still hot. They self-steam, making it easier to peel them. BTW, my car still smells faintly of roasted chilis!

Here’s what they looked like when I opened the bag at home – you can see a couple of the heads of garlic I had them put in to roast with the peppers: 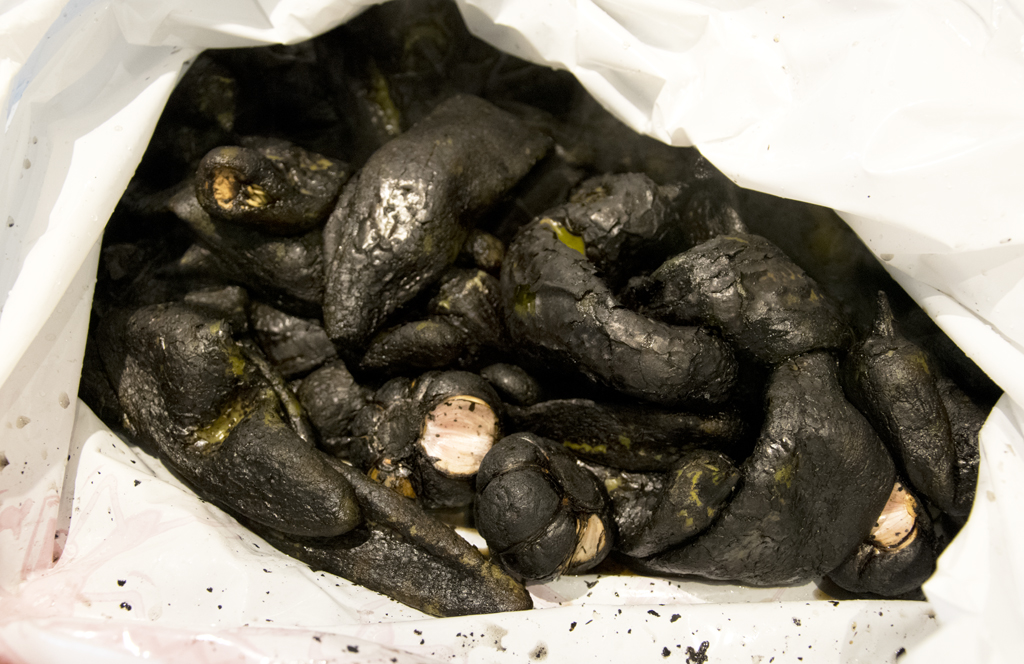 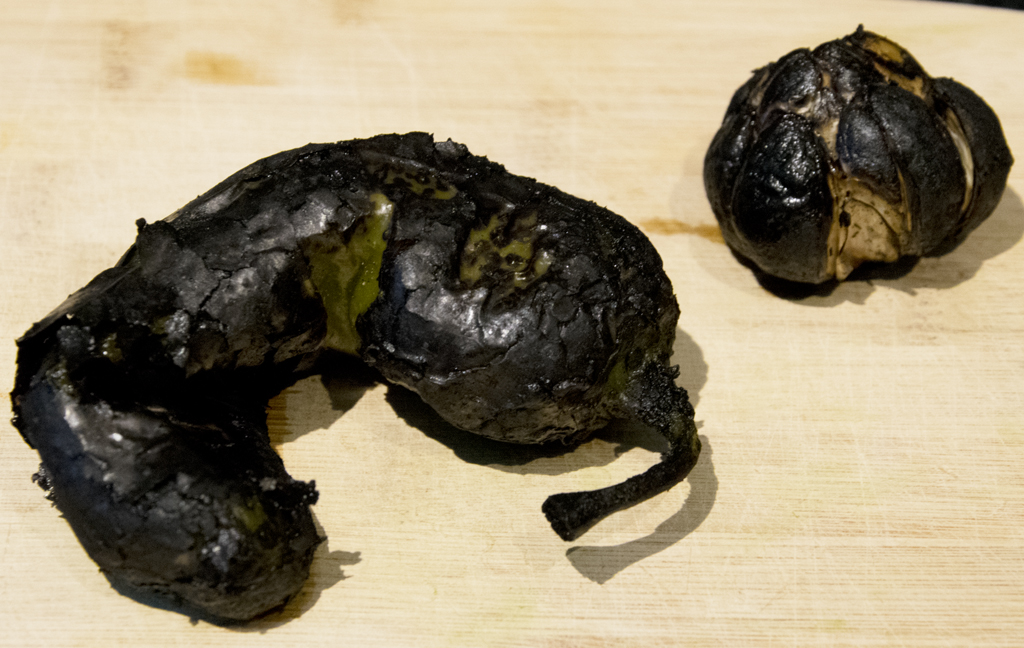 Now my work began. It wasn’t difficult to peel off the charred skin; it just kind of slid off in a sticky, charred clump, and it was easy to take off the stems. Then I had to open them and scrape out the seeds with a spoon, all wearing gloves, of course: 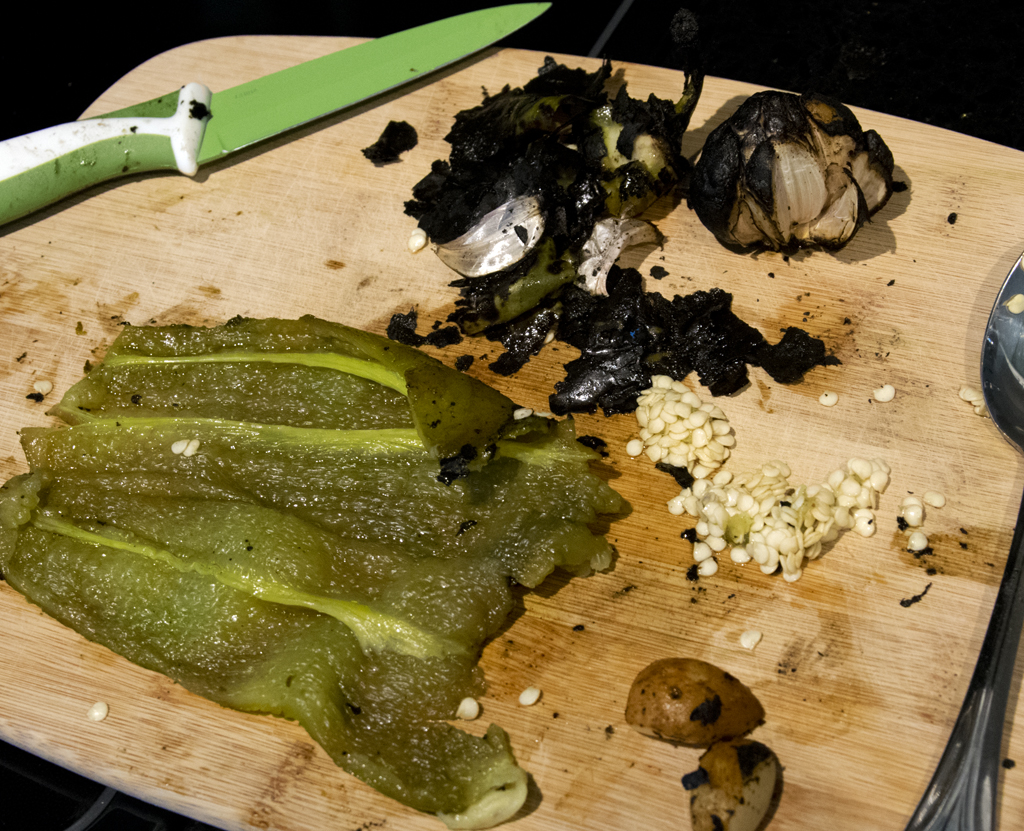 Hatch chilis are very popular and they are called Hatch because they grow in a valley by that name in New Mexico. Hatch chilis are New Mexico’s state vegetable (Colorado doesn’t have one). And I can tell you from experience that the state question is, “Red or green?”, which refers to salsa made from red chilis or salsa made from green ones. If you answer, “Christmas”, you get both. Nothin’ better on scrambled eggs!

Anyway, my half-bushel of Hatch chilis yielded 68 peppers in all. And, though it was easy to take off the skins, and stems, I got pretty tired of it before I was finished. Here they are before I rinsed them. You can tell I got a little lazy toward the end: 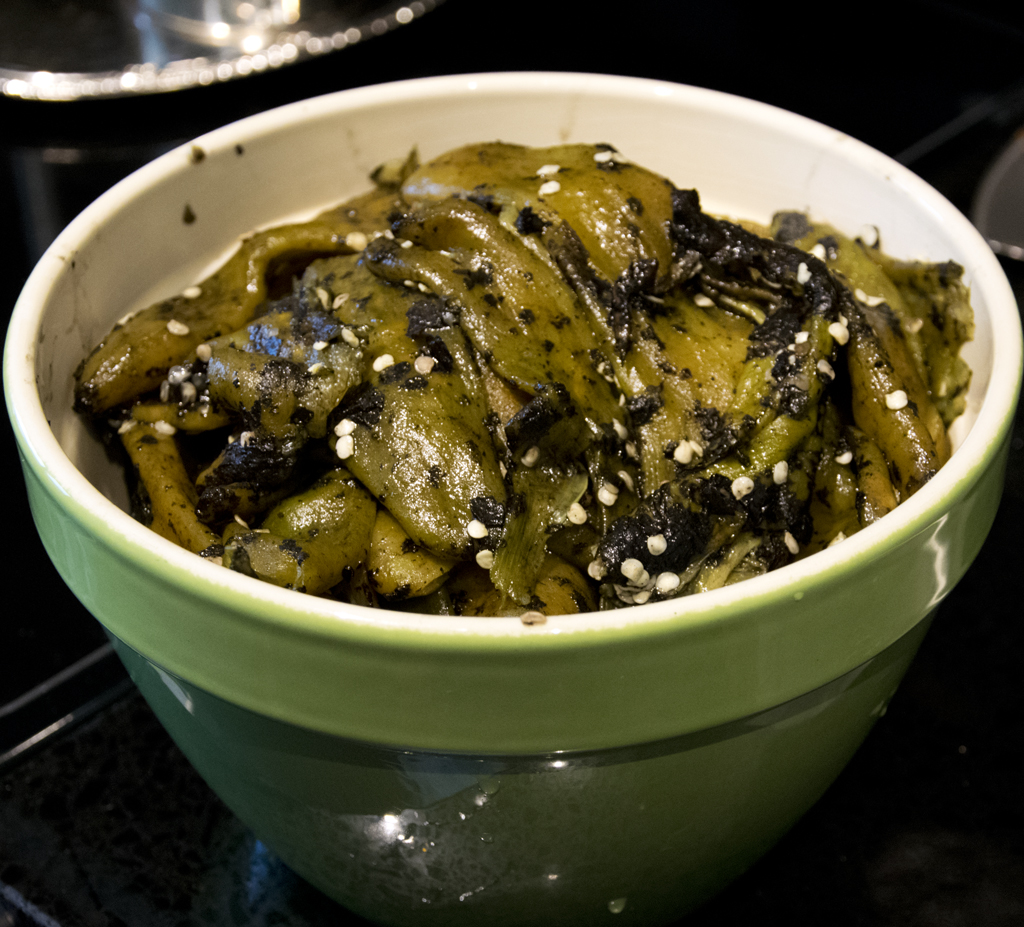 When I opened them to rinse out the seeds (not sure if this is the right way to do it, but that’s what I did), I got choked out a couple of times from the capsaicin that wafted into my nose. I didn’t chop them before putting them in the freezer, but you can. In fact, some people freeze them before taking off the skin or stems, but I’m glad I did what I did. I’m still not sure I’ll use 68 Hatch chilis during the next year, but we’ll see. For starters, I made some salsa verde with a half of one and eight smallish tomatillos:

I’m just really glad I got to buy fresh chilis and have them roasted!

I also got some much-touted Mexican pinon pine nuts – $5 for a very small bag. I didn’t realize they were going to be so hard to open. I wanted to use them in baking, but I kept smashing them beyond recognition trying to get them open. I think the best thing to do is eat them for a snack like sunflower seeds. The ones already shelled are about $15 for a couple of ounces. They are very tasty, but not that much more tasty than the Italian ones I buy. They made a good photo, though! 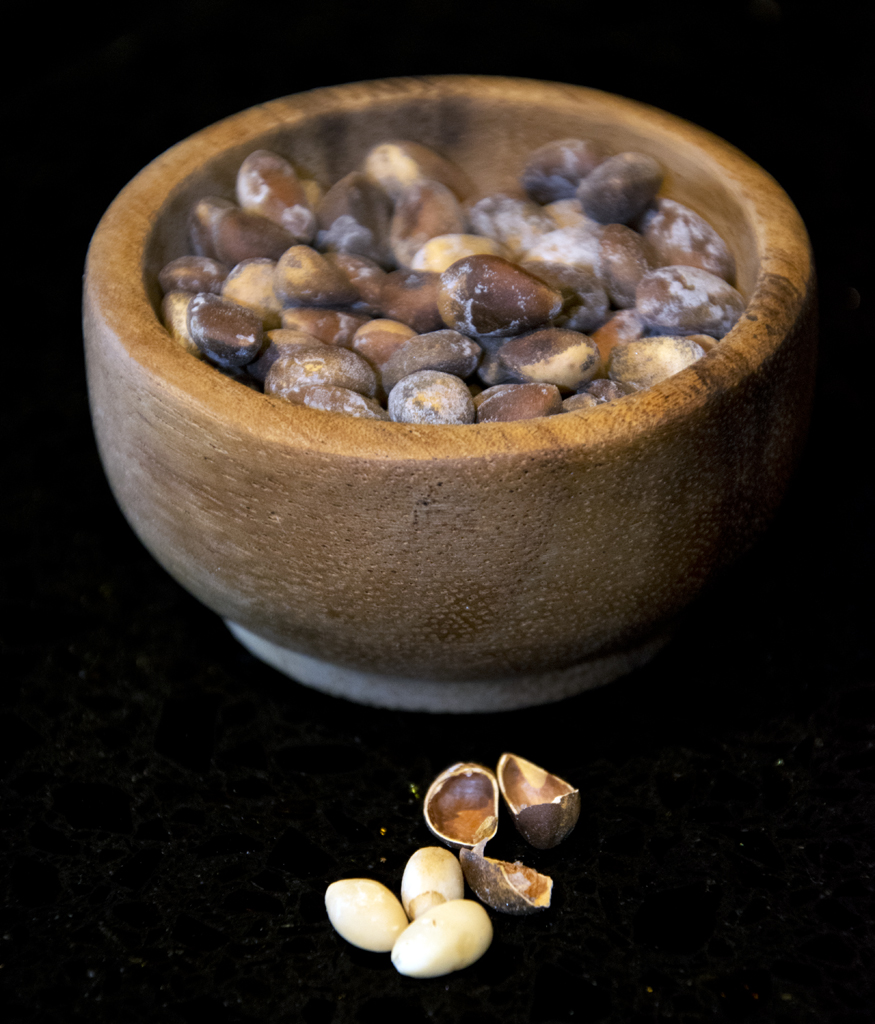 This is my ristra, or string of dried peppers. They guy in the store said he assumed these were Hatch chilis, but wasn’t sure. I guess they look about the same shape. I like the way they rattle. To use them, you can put them in a spice grinder to make (really hot) red pepper flakes or rehydrate them in boiling water and use them in tamales, etc. 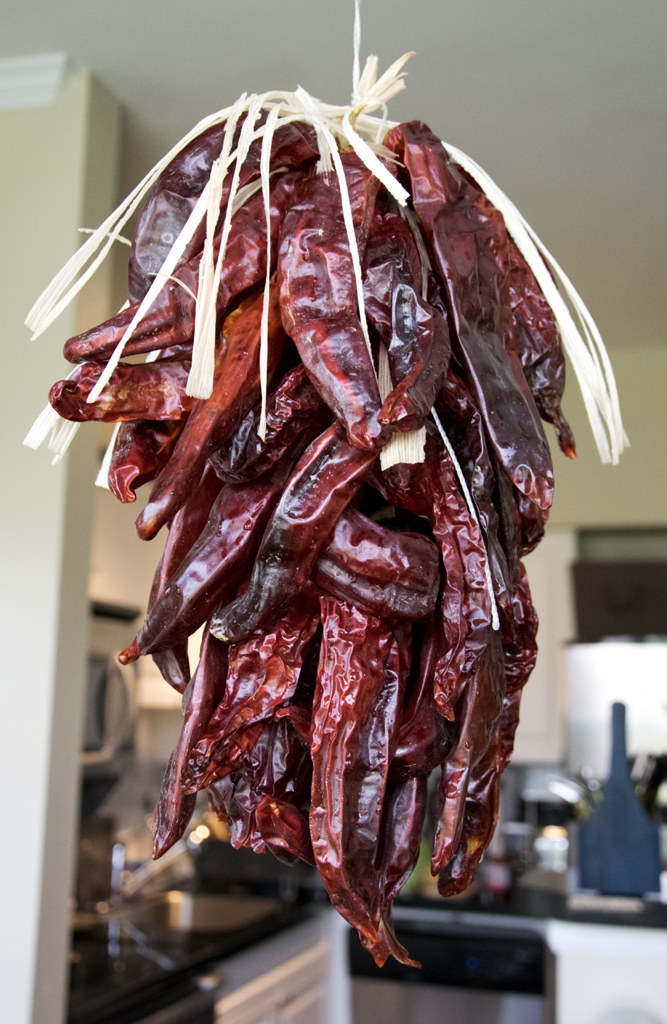 Here’s something from Lulu’s that’s well worth the investment – I promise you won’t go back to regular pepper! 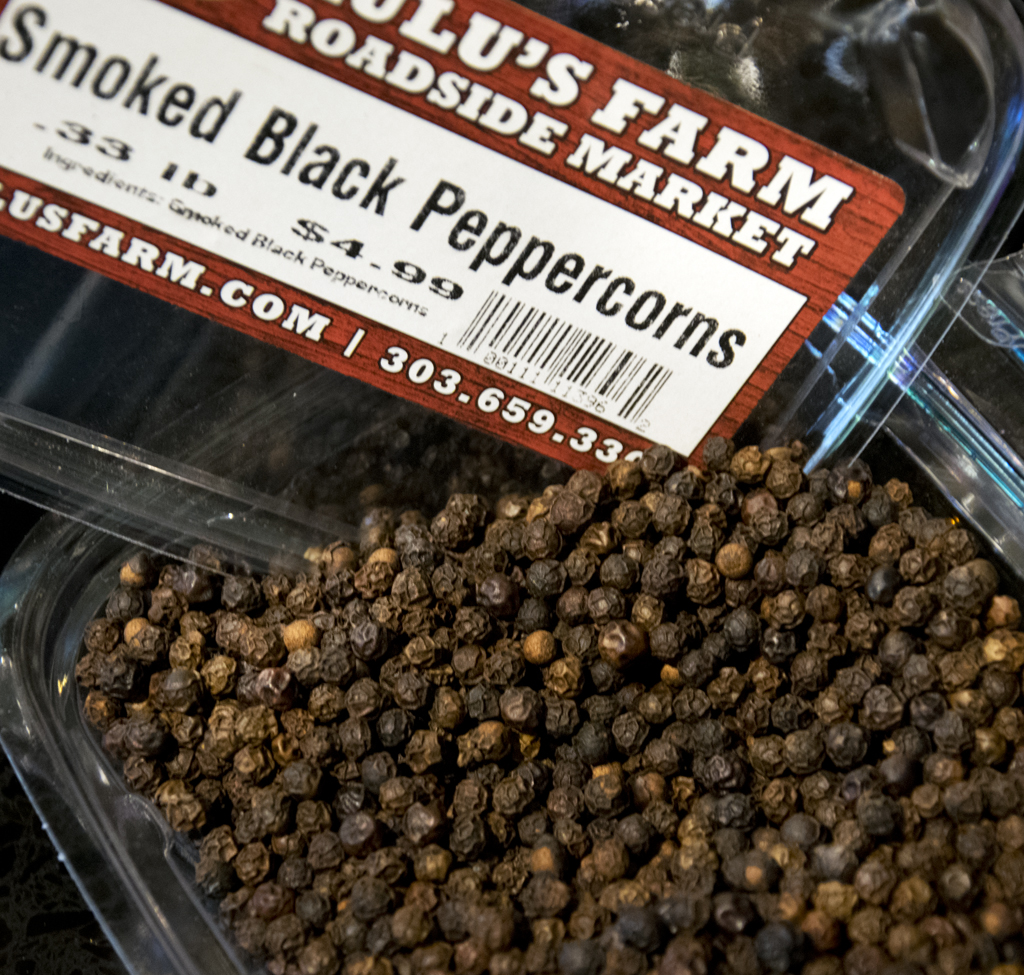 Here’s wishing you a spicy week! Come on over and I’ll make you something with chilis in it! 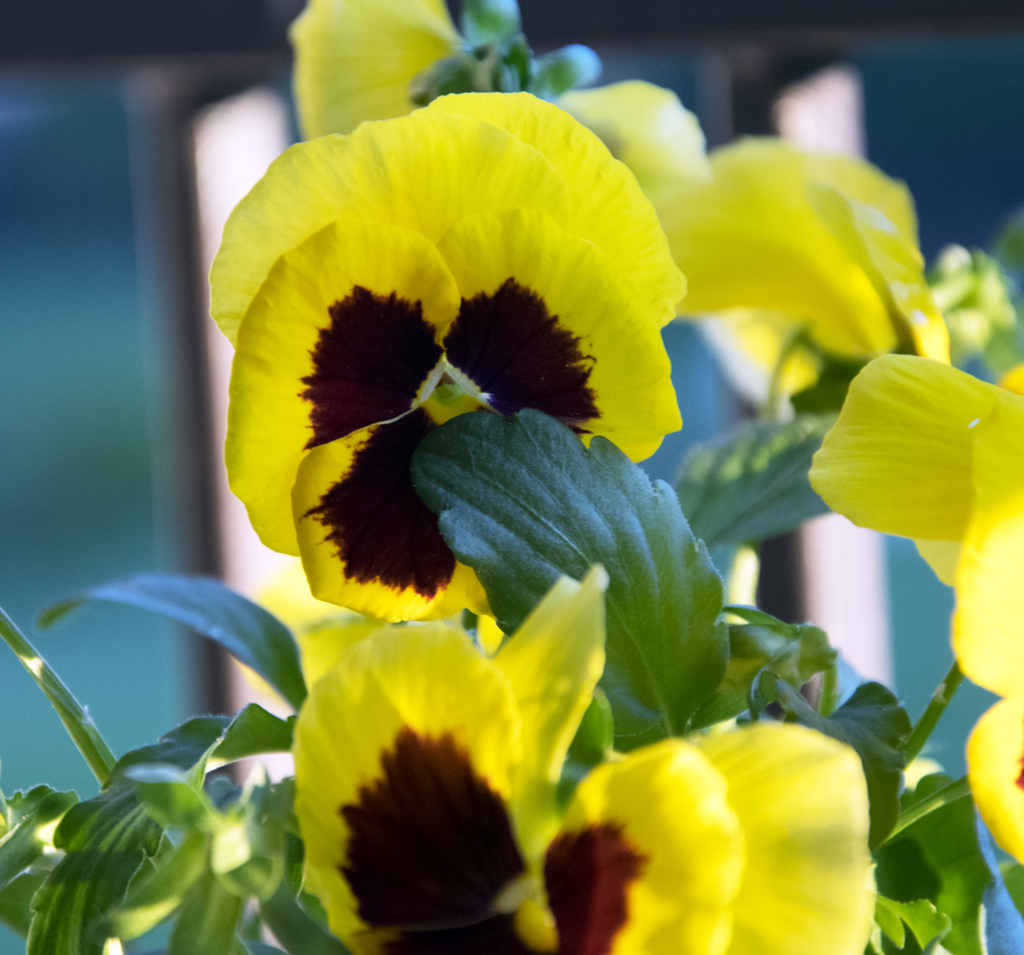