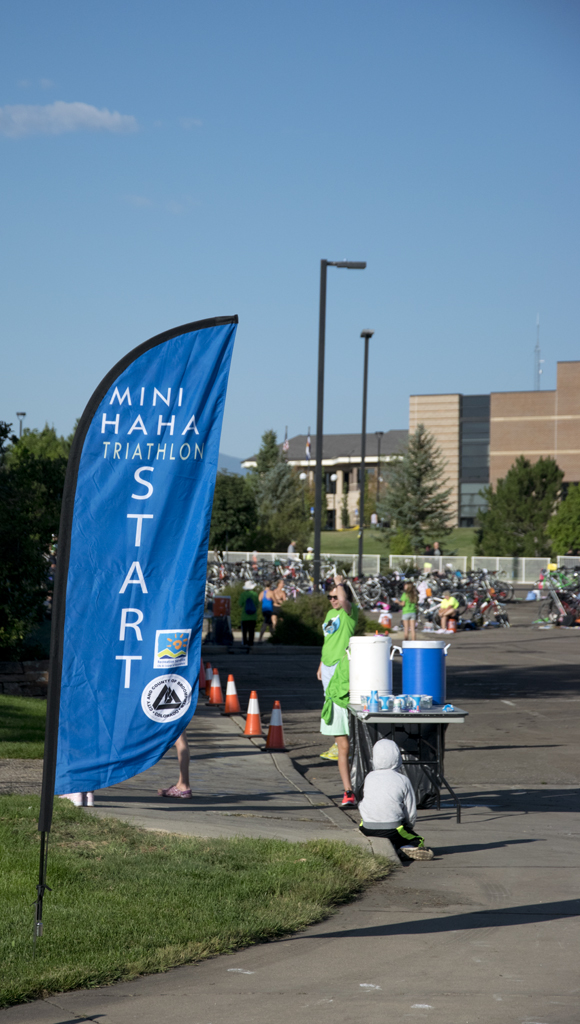 Recently my husband and I encountered what typifies living in this area: a scaled-down triathlon just a few blocks from our apartment. It’s an annual event called the Broomfield Mini Ha Ha Triathlon, and I gotta love the name of that! I’d seen an ad online about it and knew it was nearby, so, early on Saturday morning we headed toward the rec center that’s just on the other side of a park from here.

First thing we saw was a wide chalk line on the sidewalk and paths, which we figured out was the path for the running leg of the triathlon. Sure enough, we saw this guy out ahead by about 30 seconds or so: 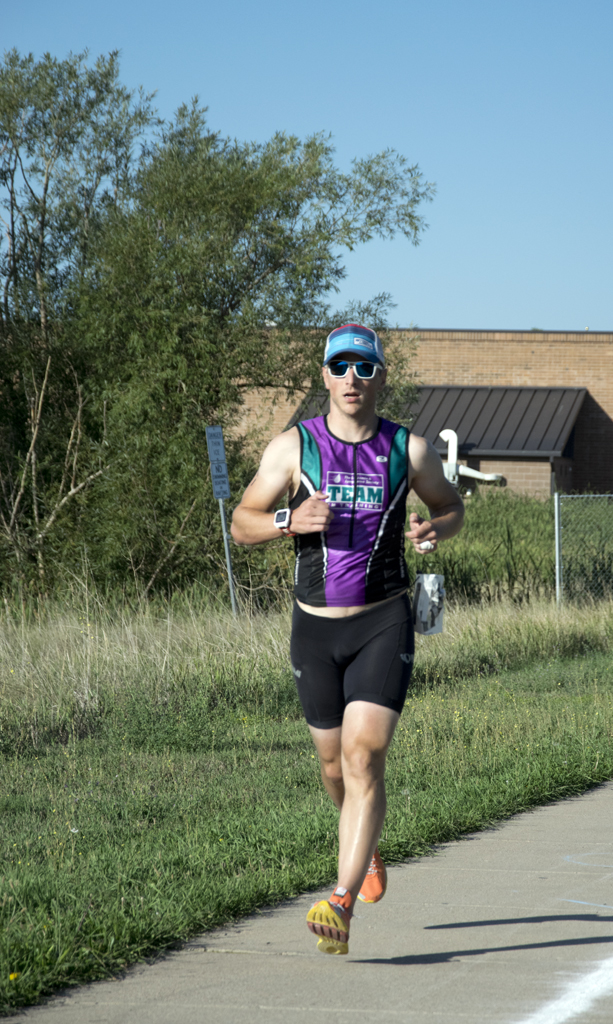 That building in the background is the rec center that was the center of the event. A few seconds later I got a shot of this guy – gotta love his enthusiasm! 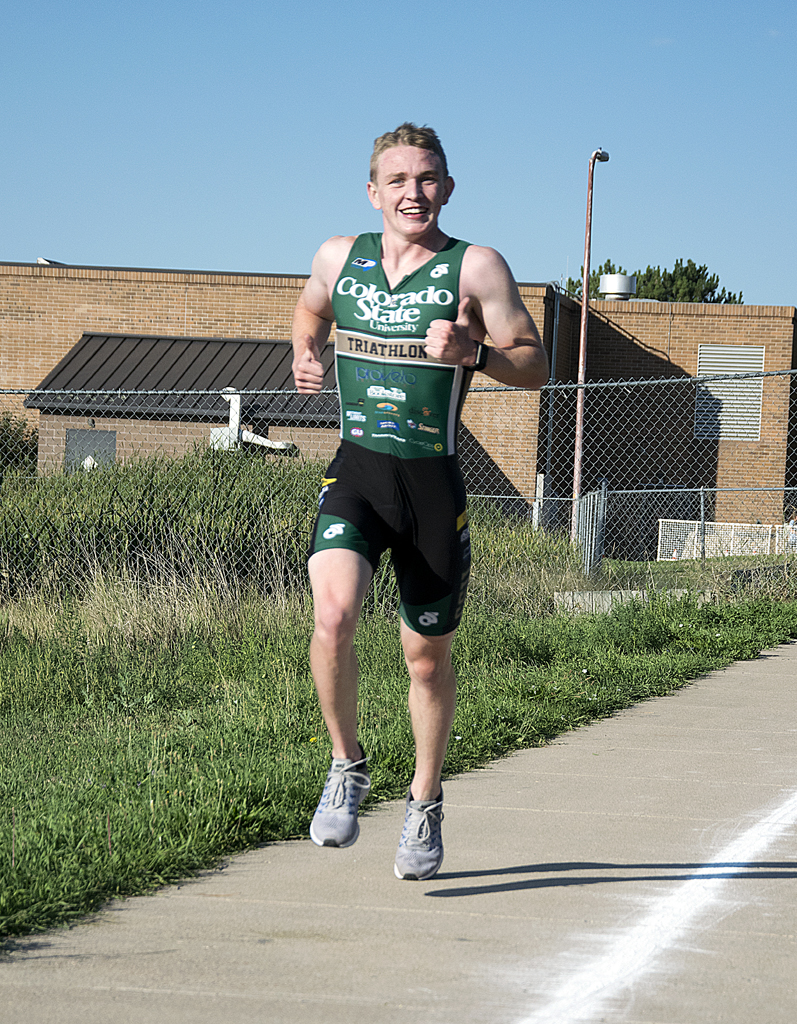 Because we were coming up behind the building, we encountered things somewhat out of order. The actual order of events in a triathlon is swim-bike-run, so those first two guys were actually on the third leg of the task. We kept walking and next we saw people exiting the rec center, obviously having just finished the swim portion, which was actually the first leg of the triathlon: 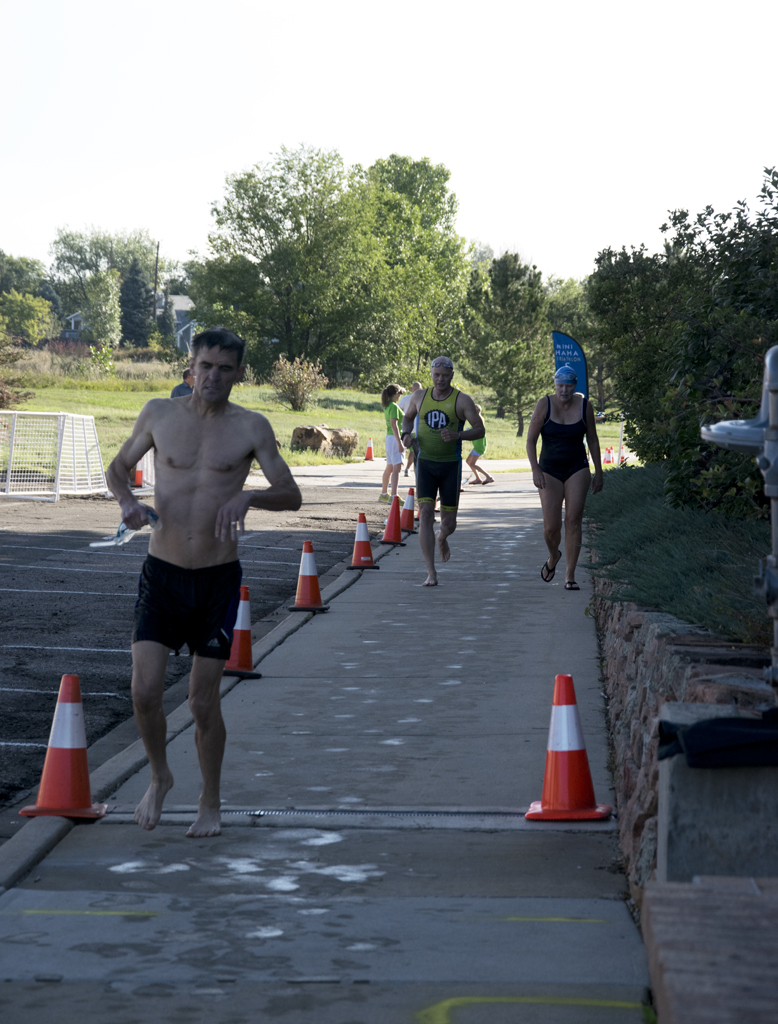 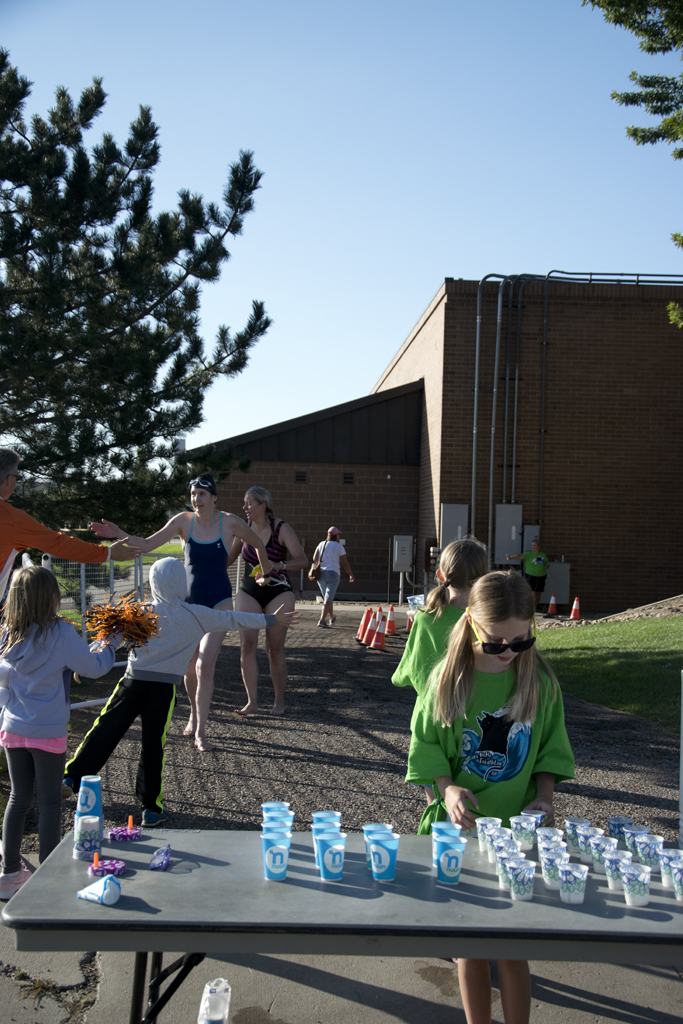 Just beyond that we saw the official starting line:

And just beyond the starting line flag was the corral with all the bikes waiting on the swimmers: 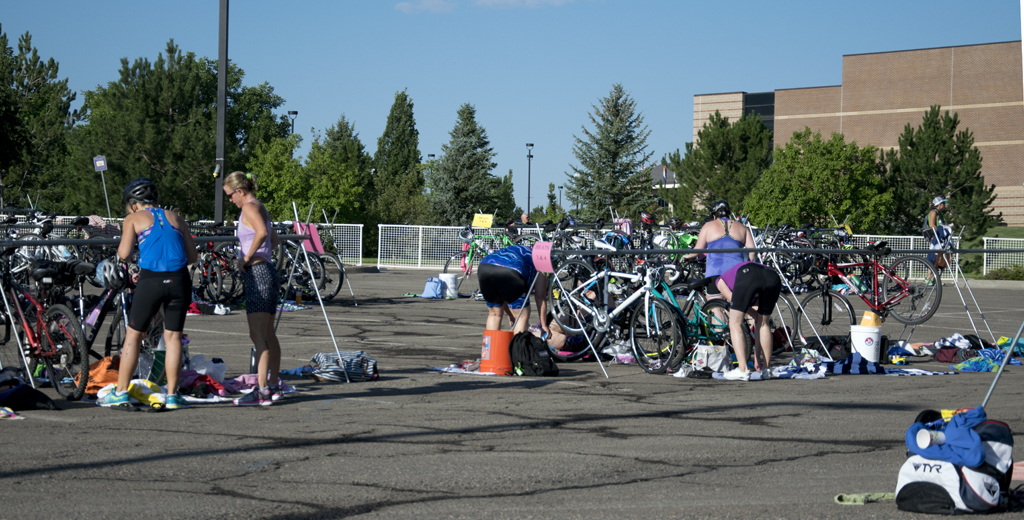 We wandered into the rec center after that and I got this shot of the swimming pool where people were still swimming their laps: 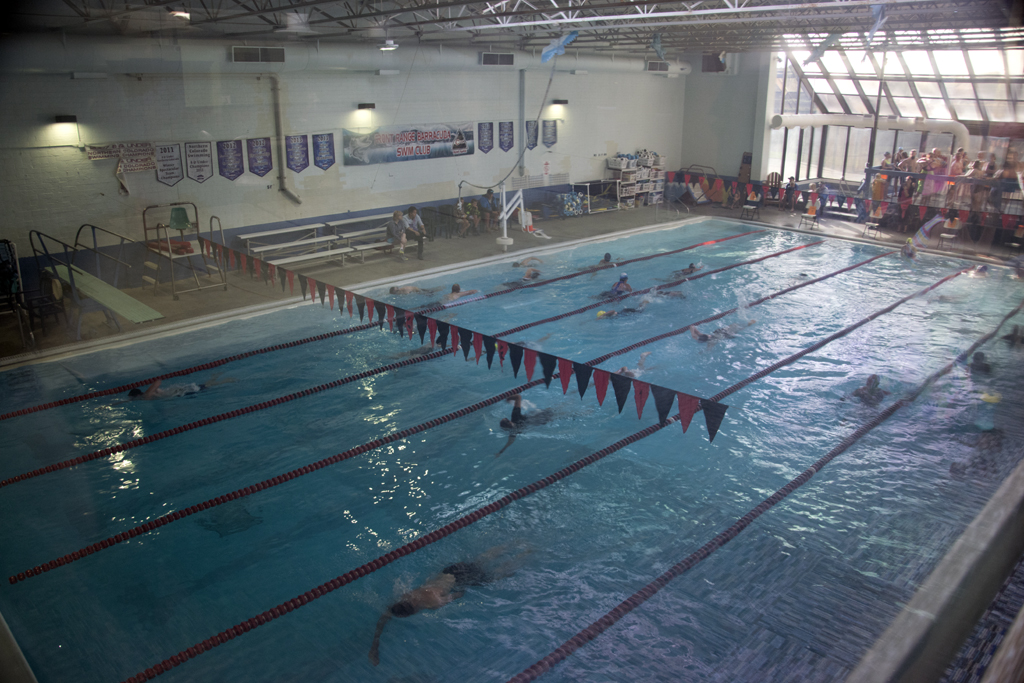 After perusing the rec center for 20 minutes or more and getting information about how to join, etc., we exited the front door. In the front parking lot was the finish line, where I got this shot: 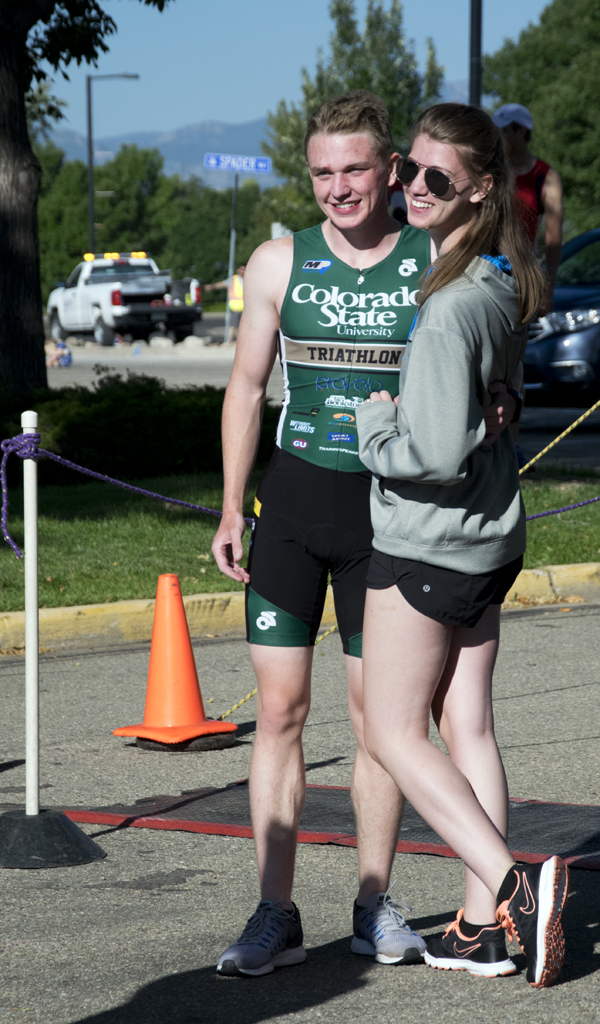 Recognize him? He was the second runner we saw that morning. He was posing with his girlfriend for a picture his mom was taking and I sort of stood behind her and stole the moment for my own camera. Turns out he’d won the triathlon! I talked to his mom and later sent her the pictures I’d taken of him that day – his name is Nick Johnston and he’s a student at Colorado State just up the road in Ft. Collins (go, Rams!).

What happened to the first runner we saw that morning? I spoke to him later and asked him if he’d won. He said flatly, “College kids,” and walked away! I ran after him and showed him the picture I had of him and he said, “You can’t really tell I was hurting there.” He refused my offer to send him the photos I had of him, too. Poor guy.

Anyway, my husband and I hung out along the route under a shade tree in our nice, comfy folding chairs, watching the competitors in the triathlon and shouting encouragements. Here are some of the other shots I got: 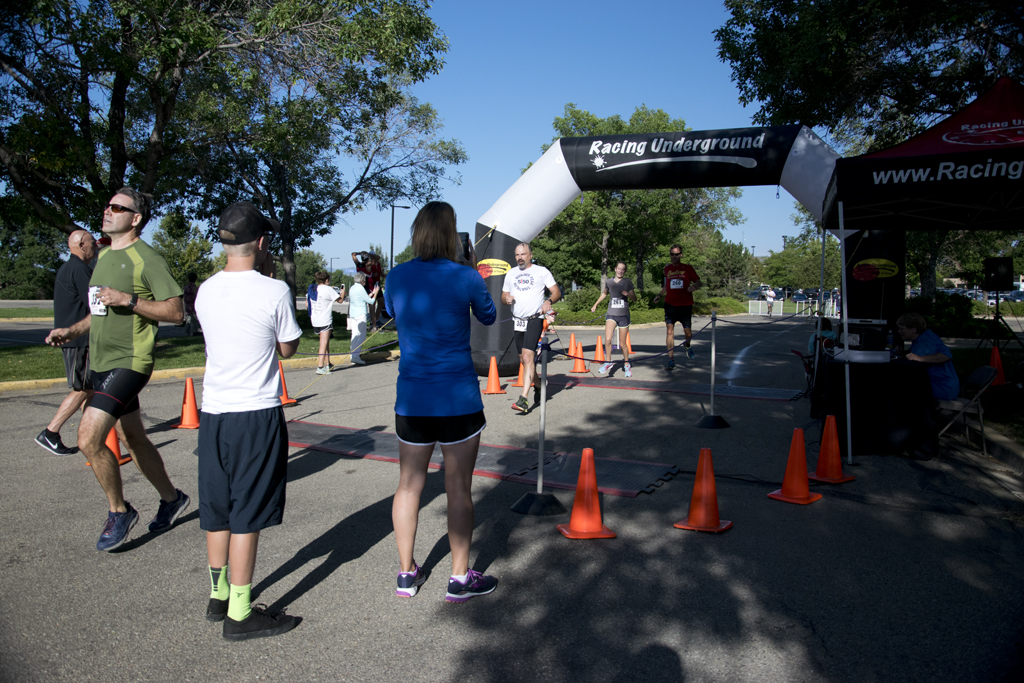 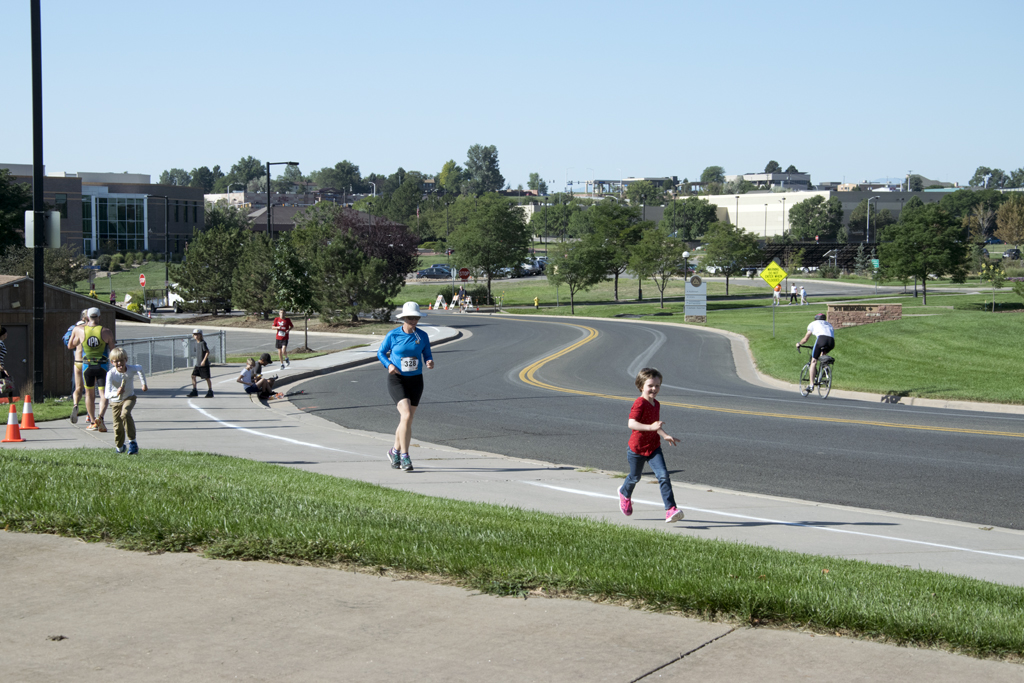 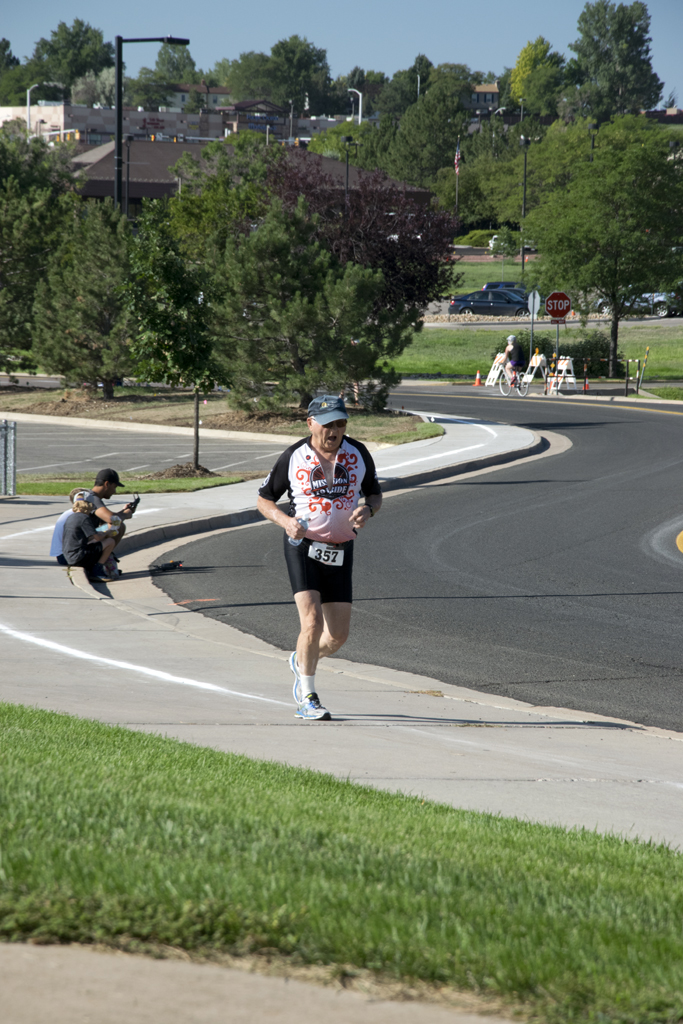 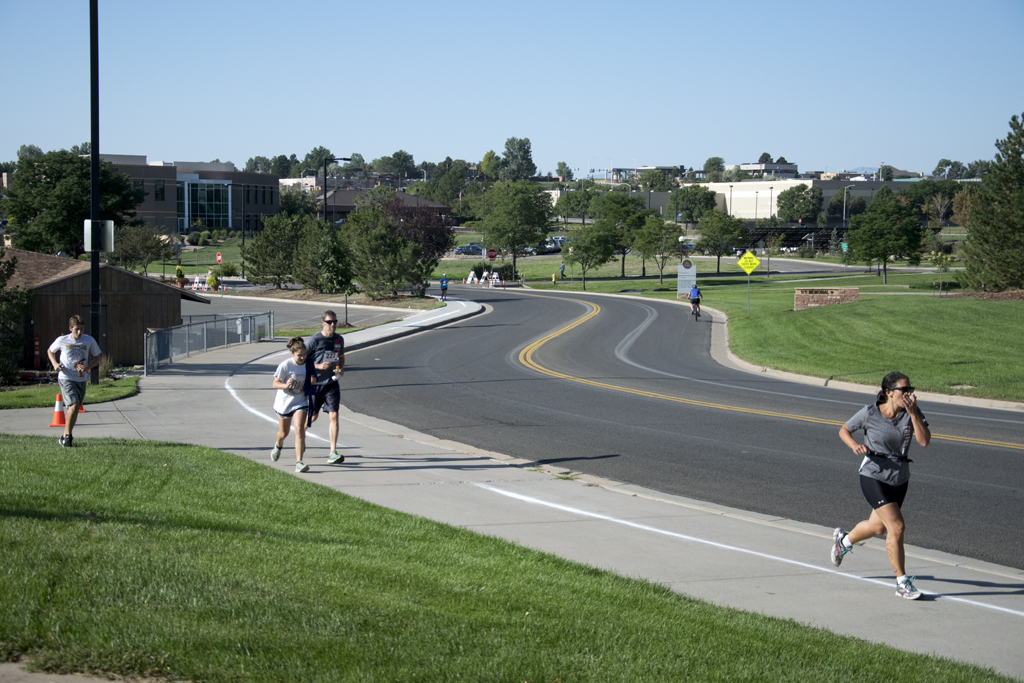 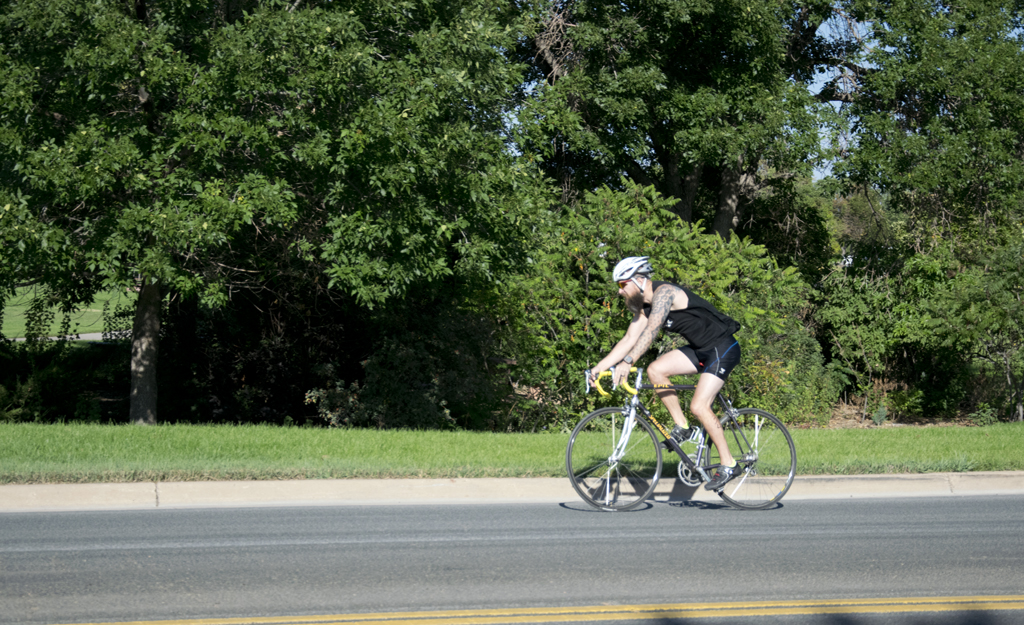 My favorite running gear of all time: gold lame’ Speedos! 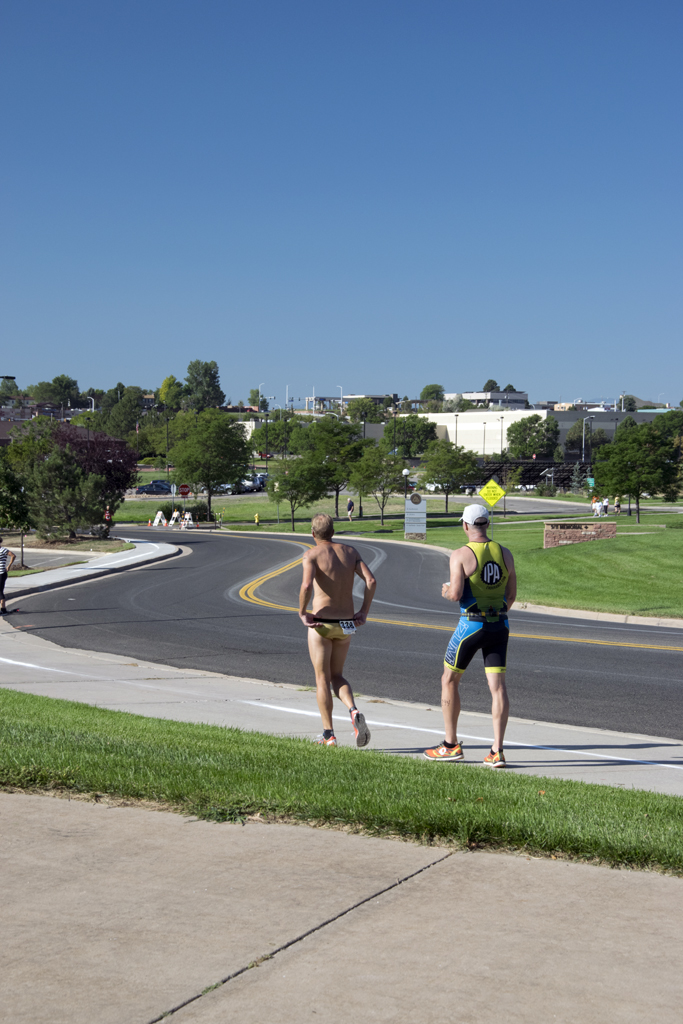 I was surprised at the huge range of ages and physical conditions of the participants. I even came away with a small illusion that I could actually do that, too, but it would certainly take A LOT of training and self-discipline. I’m still impressed our little town has such an event every year, in addition to the weekly outdoor concerts, farmers market and myriad other happenings. Seems we landed in a good place!

This week the weather has turned decidedly fall-like, with highs only in the 60s, rain and gray clouds. I don’t miss the heat, but I do miss the sun – but only a little so far. They tell me this is very unusual, though. But it’s been a good time to make some of my favorite cold-weather recipes like ribollita and Tuscan bread soup. 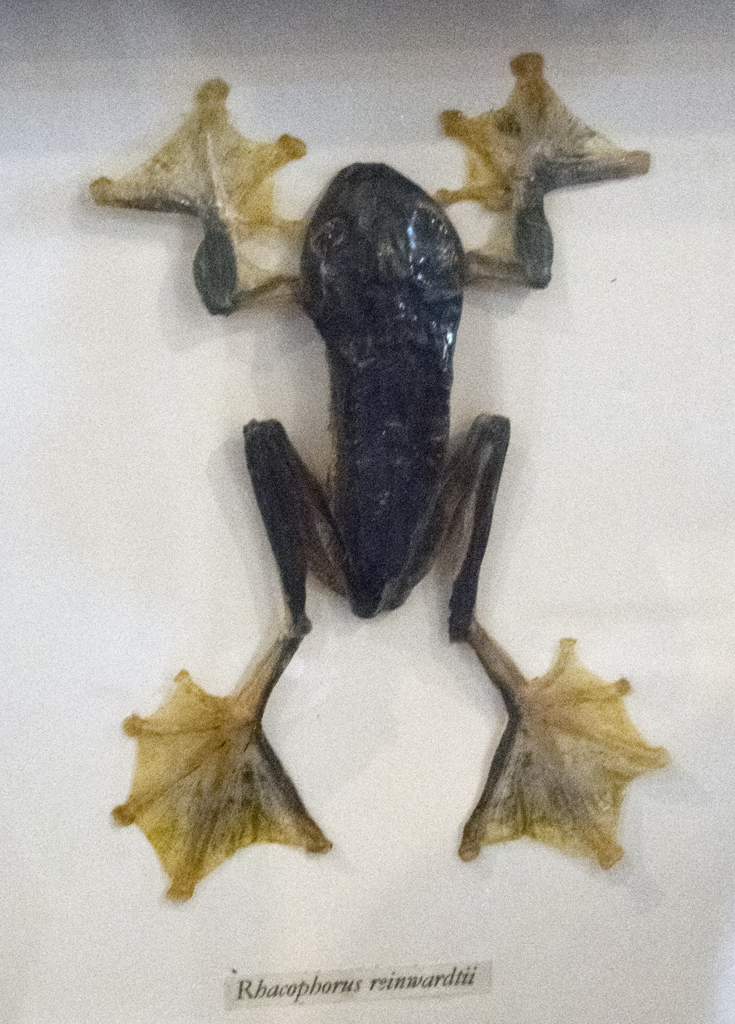