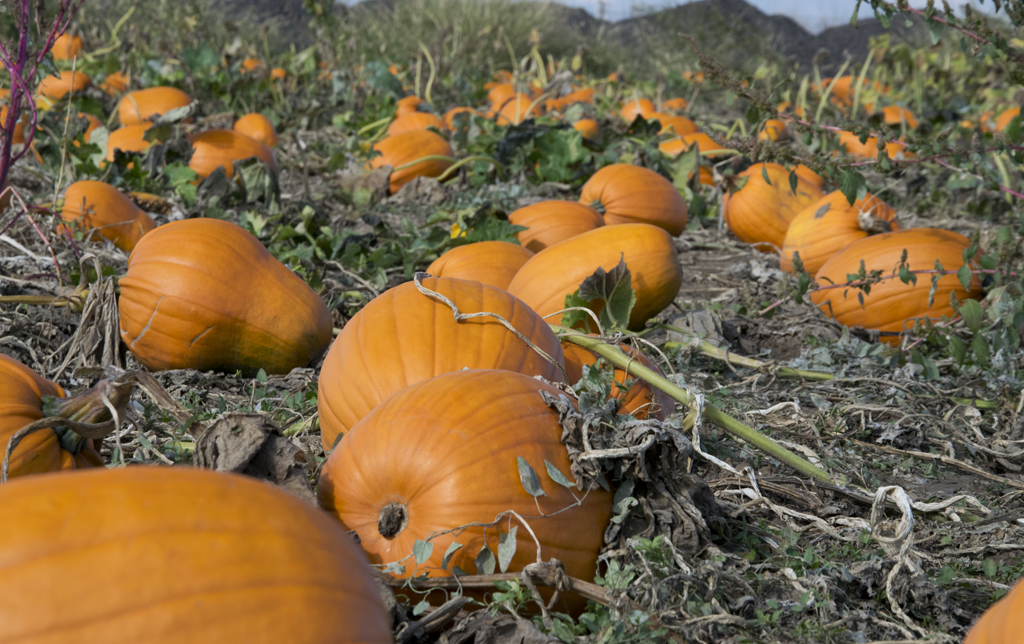 This year I’ve seen the most vibrant fall colors I’ve seen in a long time! Finally this hot hot Colorado summer is over, as well as the two weeks of cloudy, gray rain we had. We had a frost a couple of weeks ago, too, and the trees obliged me by turning phenomenal colors! Here’s a gallery of some shots I took around the neighborhood:

Ah….that’s suitable for a relaxing interlude any time, anywhere.

It hasn’t all been bright autumn days, though. We had a snowstorm blow through last weekend. Fortunately there was plenty of weather forecast predictions of same, so I was ready with butternut squash soup and homemade cookies. But it wasn’t long-lived, less than 24 hours. Here’s a trio of photos I took – first one on Sunday, second one on Monday, third one on Tuesday this week. 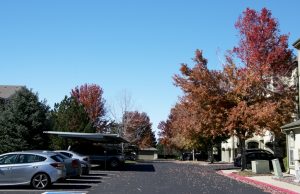 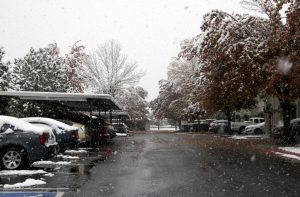 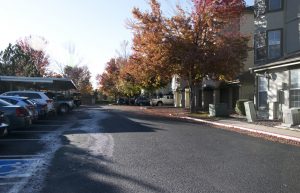 It was very reminiscent of the same sort of thing that happened last April and May. They tell me it was kind of early, but not unheard of. Now temps are back to the high 60s with that beautiful sunshine. This time, though, the mountains have their snowcaps back again.

I discovered a place nearby called Rock Creek Farm where you can go to pick your own pumpkins! Well, you know I had to do that!

My husband and I drove not 10 minutes from our apartment to check it out. First clue was the giant inflatable jack-o-lantern in the field near the driveway: 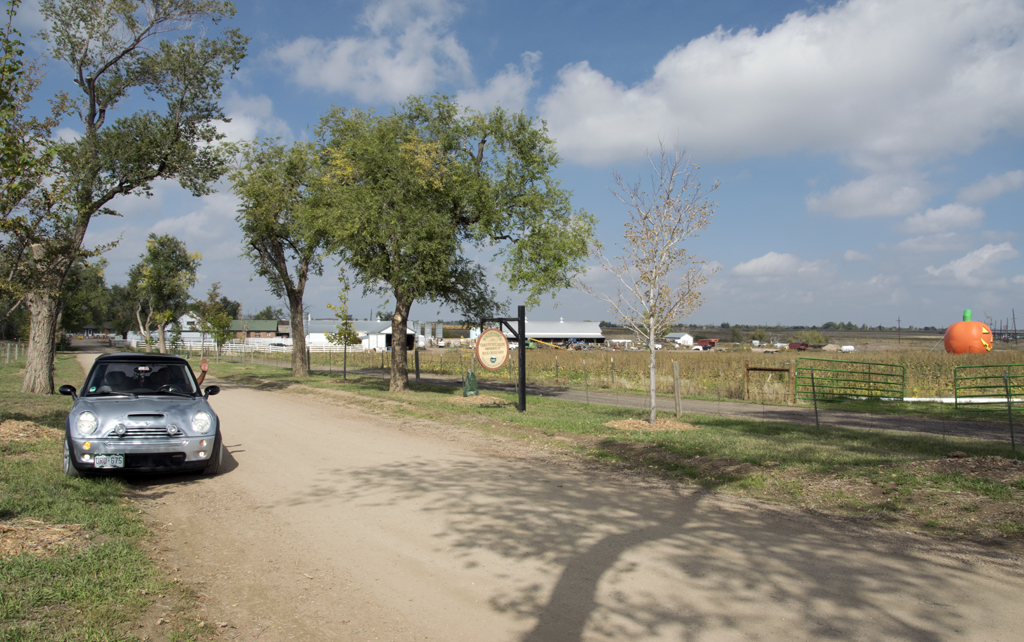 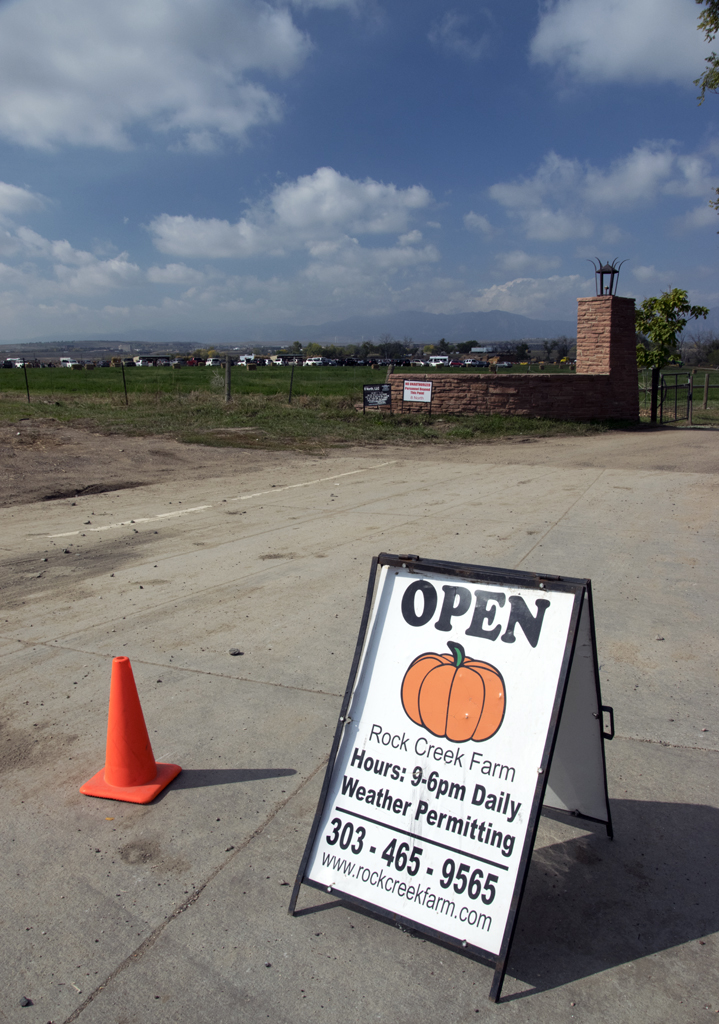 There wasn’t anyone there to tell us where to go, but it was fairly easy. You drive into the farm, which is quite extensive, as you’ll see, and just stay within the orange cones and/or follow the directional signs. We stopped at a stack of hay bales and took a flyer and a plastic picnic knife (plastic!) for harvesting, which actually worked very well. After passing a farmhouse and a couple of barns with lots of equipment, we found ourselves in a pumpkin patch:

The last picture above is my pumpkin. It weighs in at 25.4 pounds (about twice as big as my husband’s selection) and will soon become a jack-o-lantern. I hope to post a photo of the finished ‘o-lantern next week.

We continued on our way around the huge farm – the driving is only one way and it cemented the plans we have in mind to get a 4WD soon. Colorado just calls for it. But the MINI did well off-roading, even if the gravel was fresh and deep and we fishtailed a while. I count it as drifting.

Anyway, we stopped near the entrance to the corn mazes. 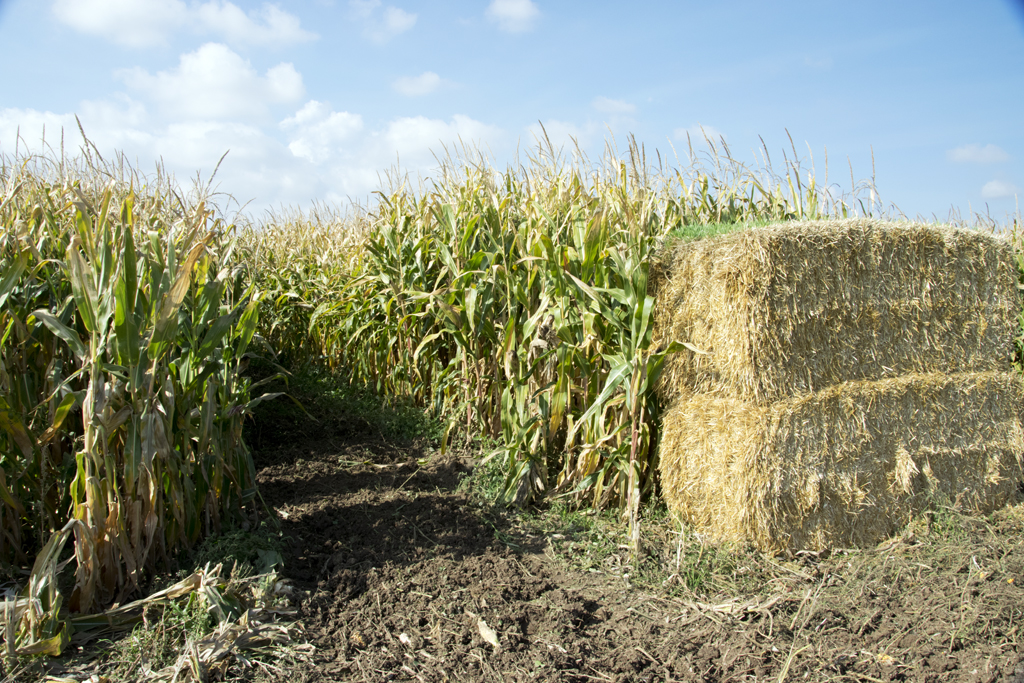 They have three mazes of varying lengths, and Rock Creek’s website shows the cool designs from years past in aerial views. They don’t disclose the current-year pattern until the season is over and I don’t have a drone, so it’s anybody’s guess what the mazes look like. We didn’t do the mazes that day, but we are having a visitor soon and plan to (I hope) go back and do them at night!

At the end of the loop around the farm – after we passed several more pumpkin patches – we arrived at the booths where we paid for our bounty. They were $8 each or two for $15, with more discounts for more pumpkins. Of course I had to get a butternut squash and a pie pumpkin as well as some pumpkin bread. I also grabbed these shots from the booth area: 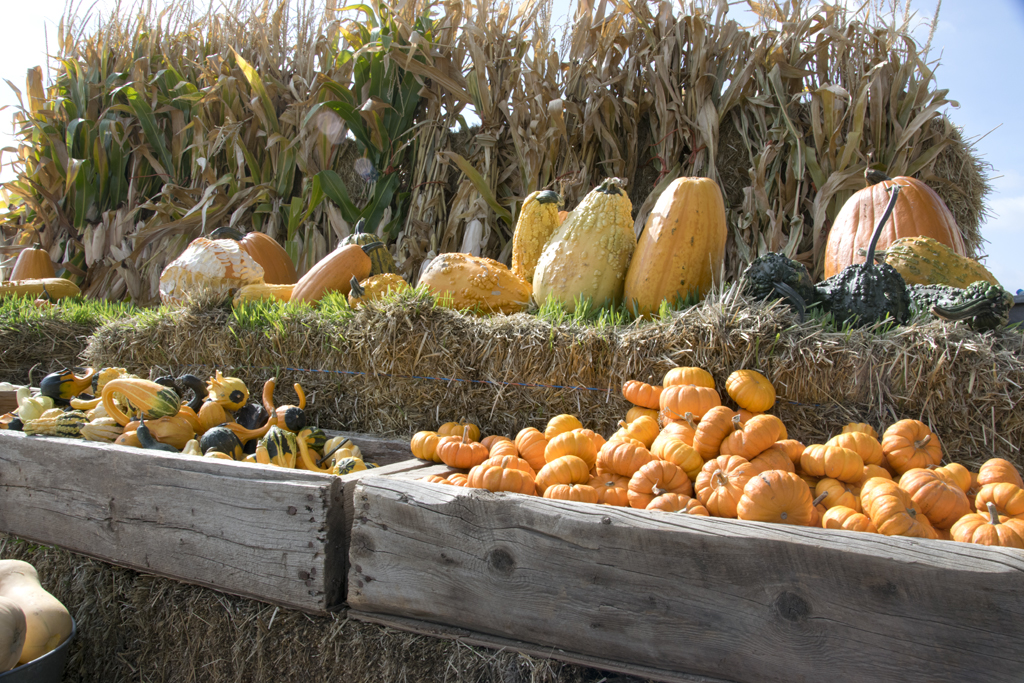 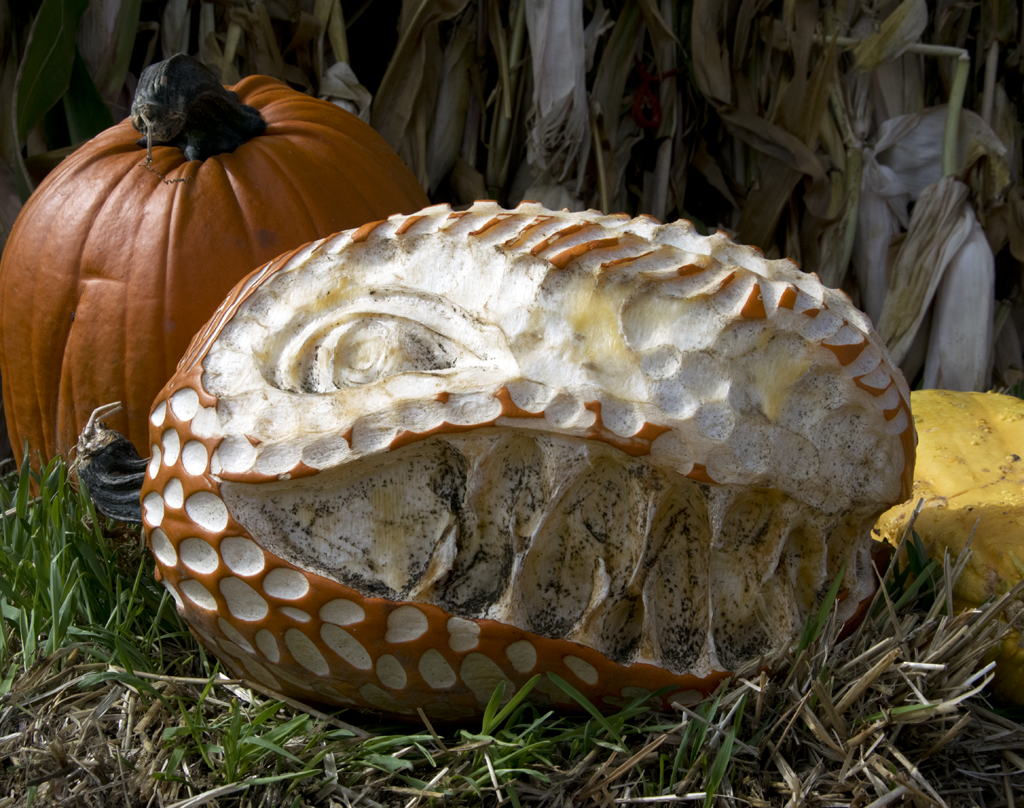 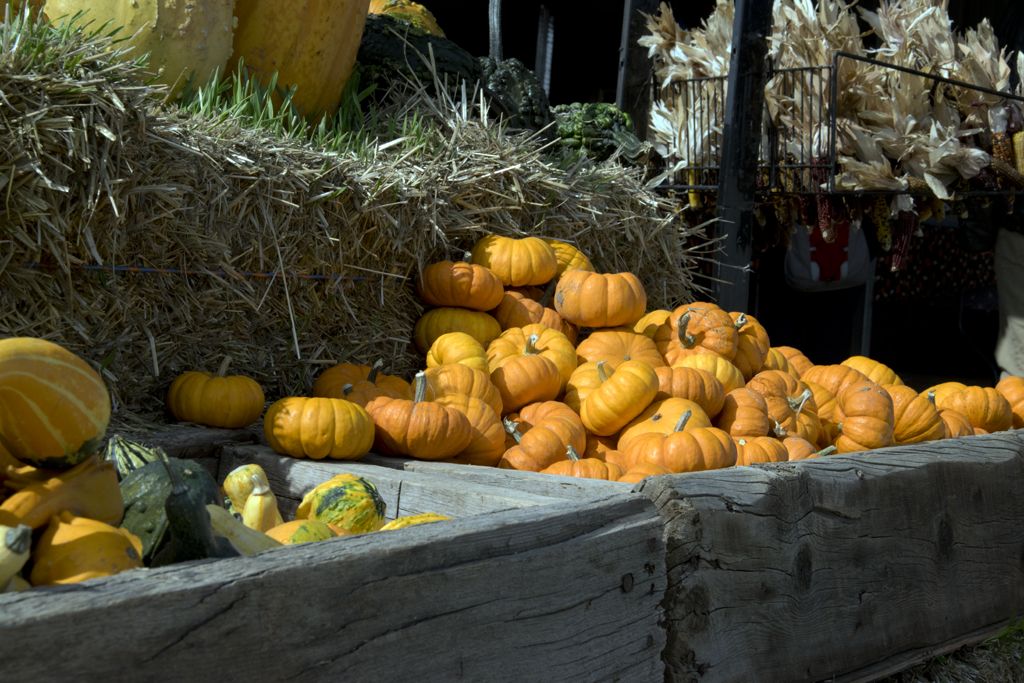 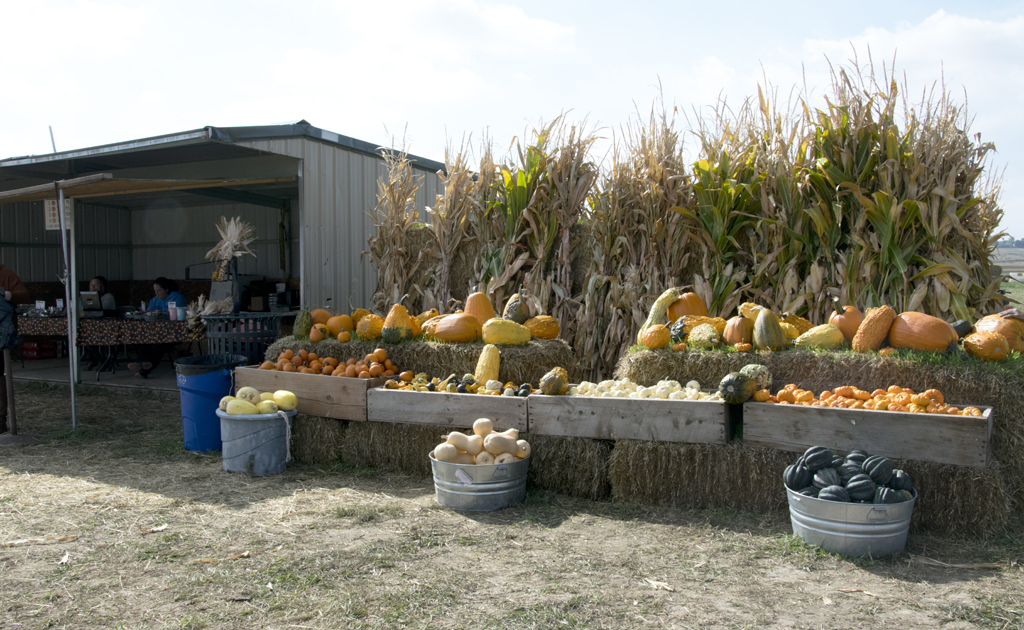 They also had a kids play area and a petting zoo, but I changed my mind about visiting the animals after traipsing through the pumpkin patches for an hour or so. Plus I heard you should visit the animals BEFORE buying vegetables!

You’ll be glad to know I’ve already roasted the butternut squash and pie pumpkin. One became soup, the seeds became snacks, and the rest is in the freezer, waiting to become a pie for Thanksgiving.

I’m so excited to have gotten to pick my own pumpkin! I hadn’t done that in years. And now I have my carving kit and am looking forward to making ole Jack come to life. So look for that picture, plus the ones from the corn maze if and when.

One last thing: I discovered where Pumpkinhead’s dad lives: 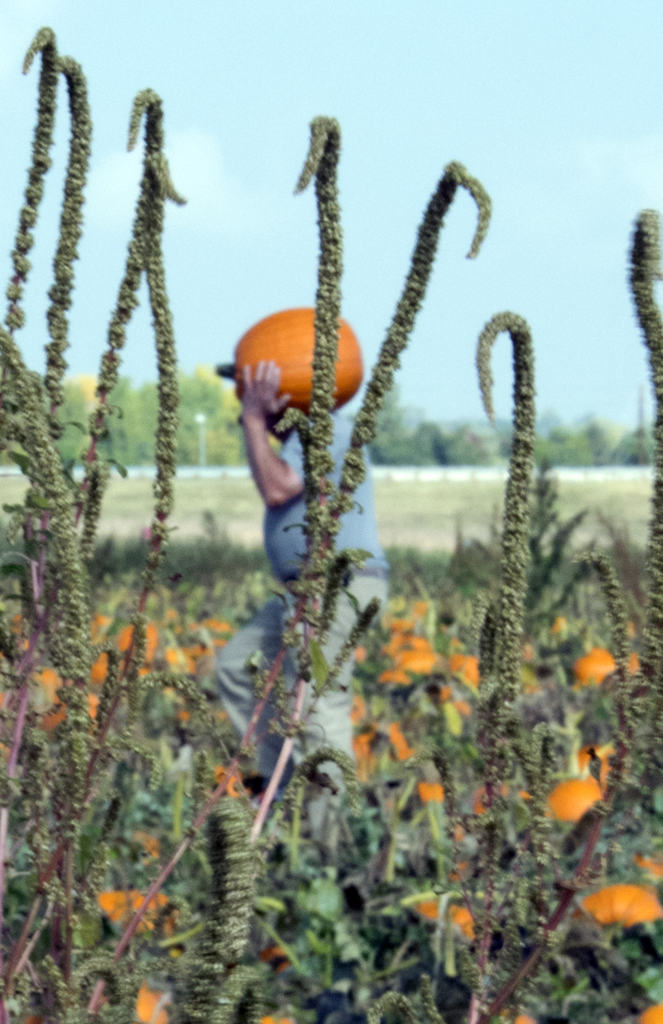 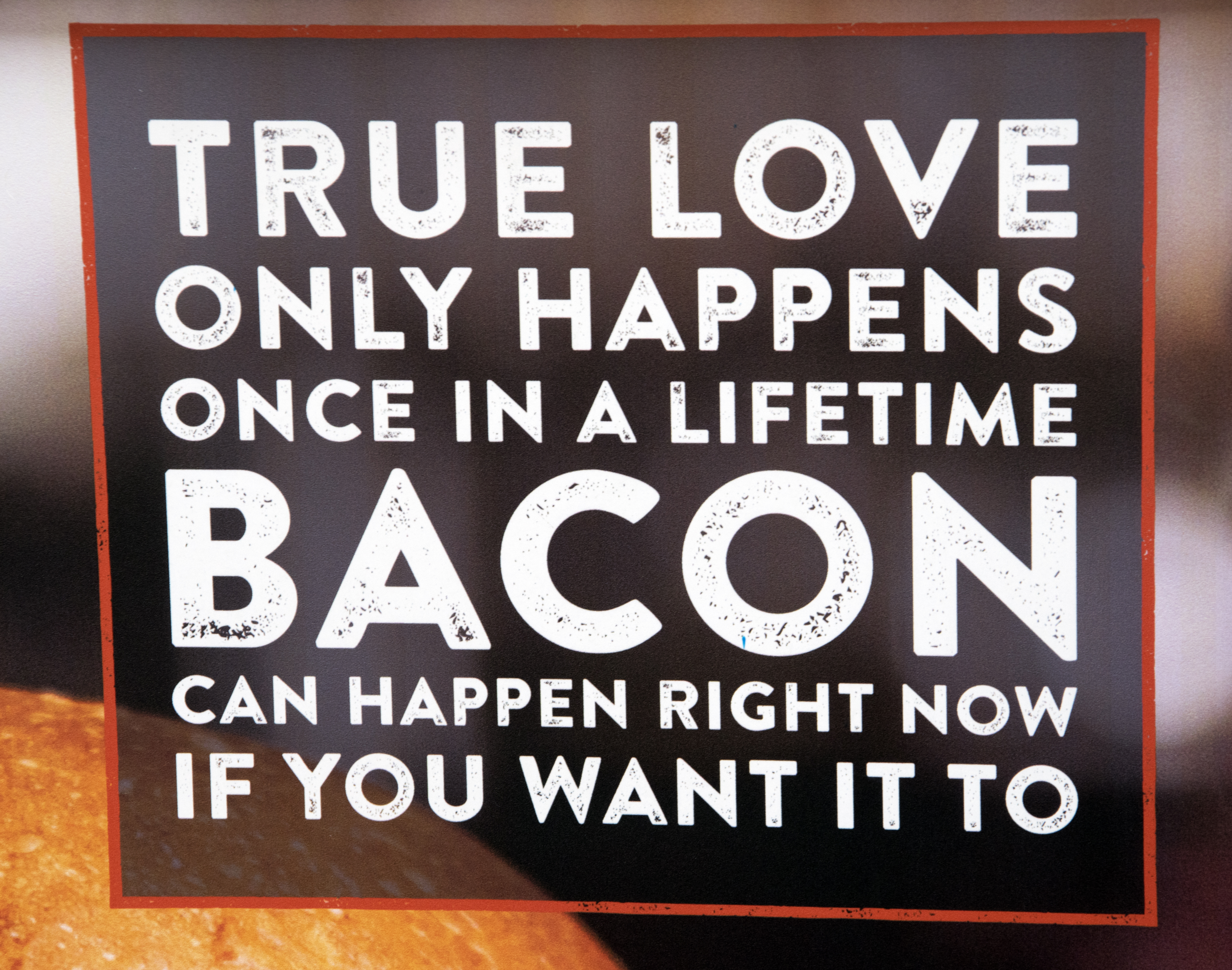 4 thoughts on “Autumn Colors, Snow, and Picking my own Pumpkin at Rock Creek Farm”