Remember that my new book will be out SOON on Amazon! A Travel for Taste: AppSnax contains 20 of my most delicious recipes for appetizers, snacks and small plates. I tested and photographed each one (I do this for you!) and compiled them into a beautiful cookbook. The price: only $14.99!

I make these recipes often for guests and parties and potlucks, or for just watching TV at home. I have published some of the recipes here on the blog, but most are brand new releases. Most of them are quick, and they are all easy and delicious!

More details about the book:

Subscribers will get first crack at ordering the book when it’s ready, so sign up today!

Last summer (has it really been four months?) I had a visitor, Rita, from Florida. She wanted to visit the Molly Brown House Museum in Denver. Actually, it hadn’t been on my radar, but I really enjoyed seeing it and learning about the force of nature that was Molly Brown.

The house is located in Denver’s Capitol Hill neighborhood. Historically, this area was where the wealthy families lived. I’d say it’s probably much the same these days. Here’s an example of some of the beautiful architecture there: 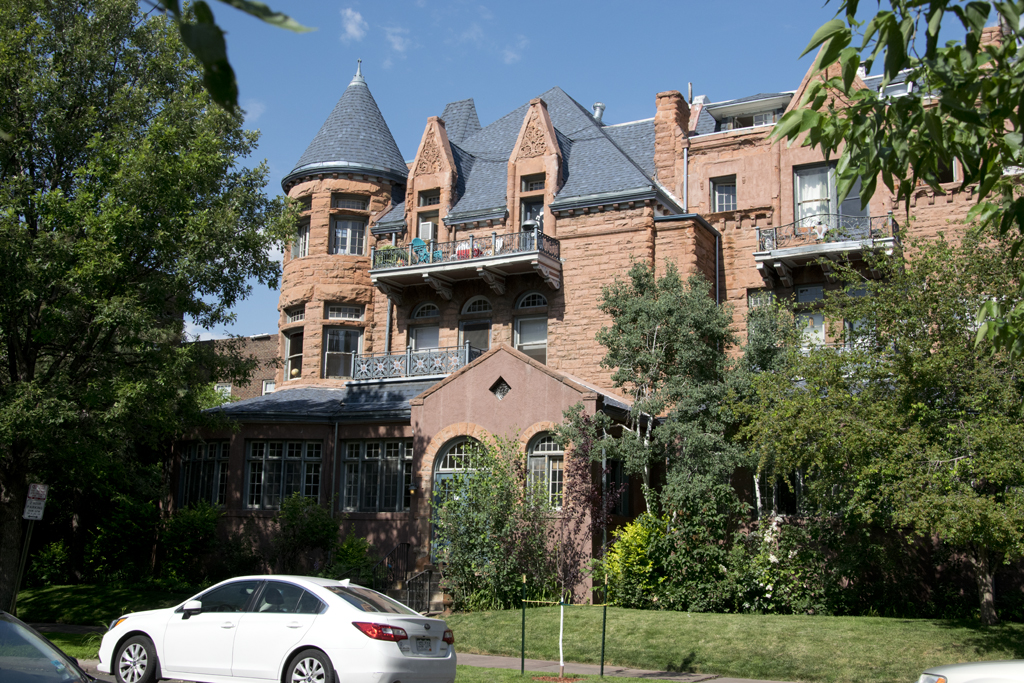 Also on the same street as the Brown House was the Salvation Army Intermountain Divisional HQ (whatever that means). It looked a lot like the Catholic elementary school I attended: 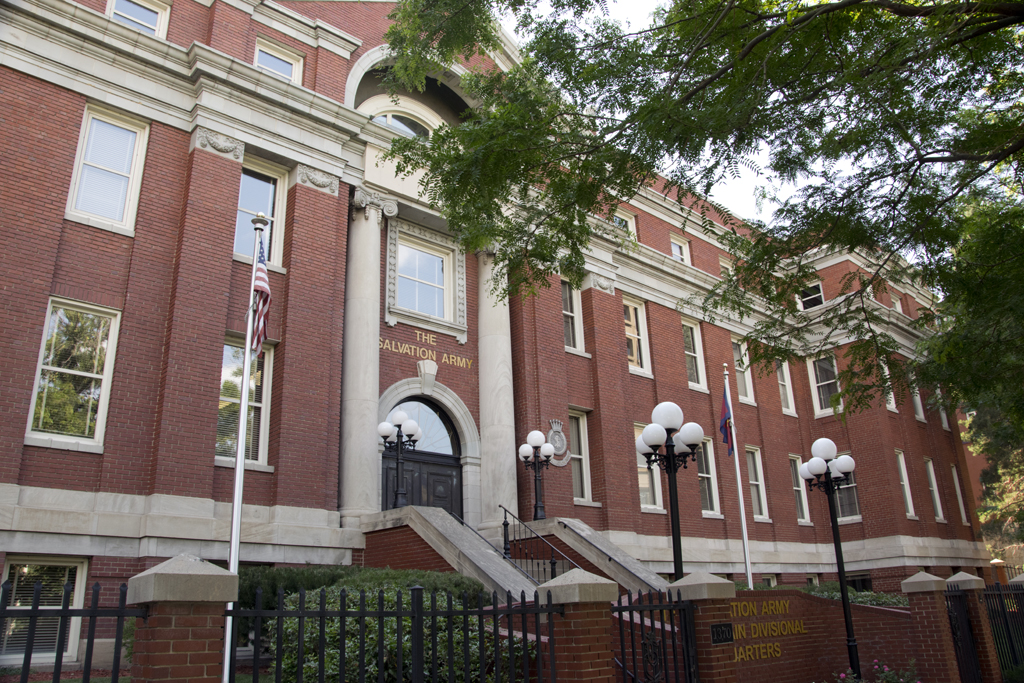 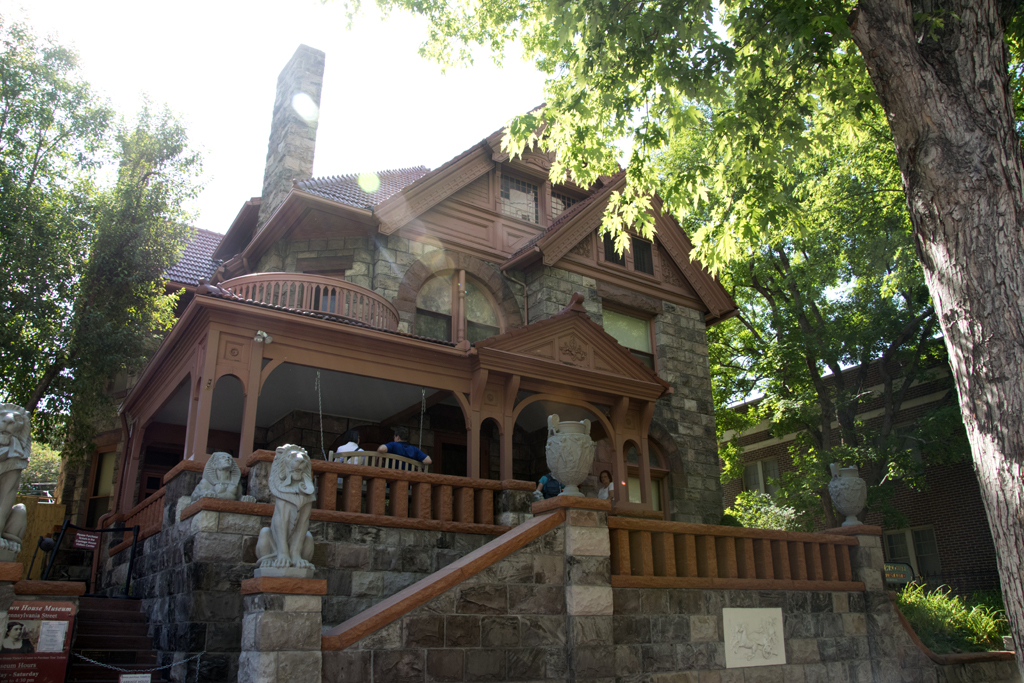 And a view from the porch: 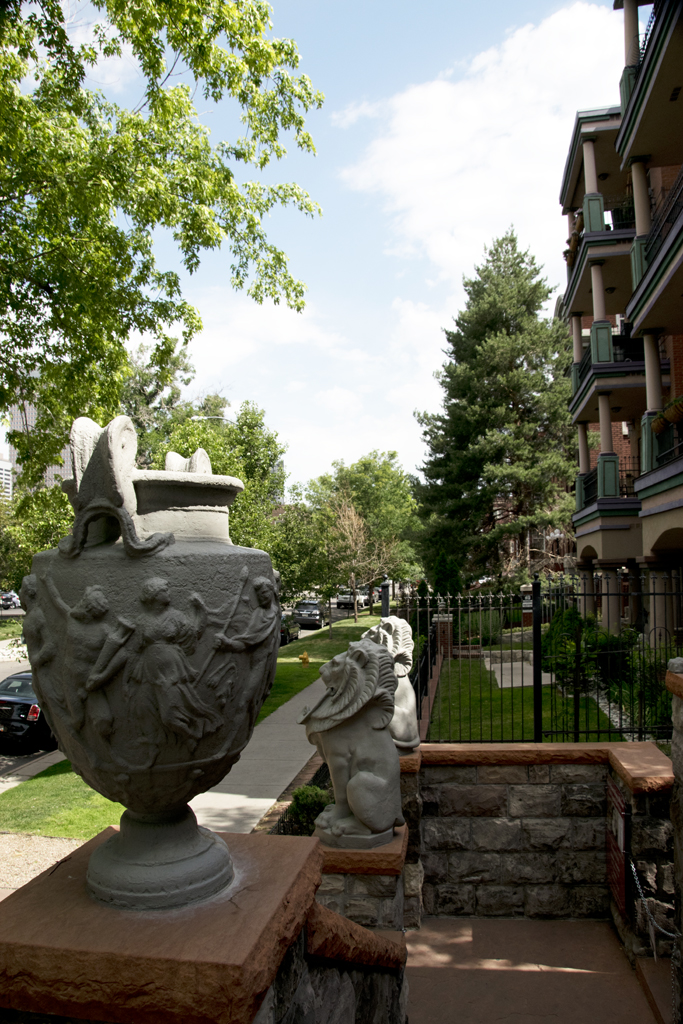 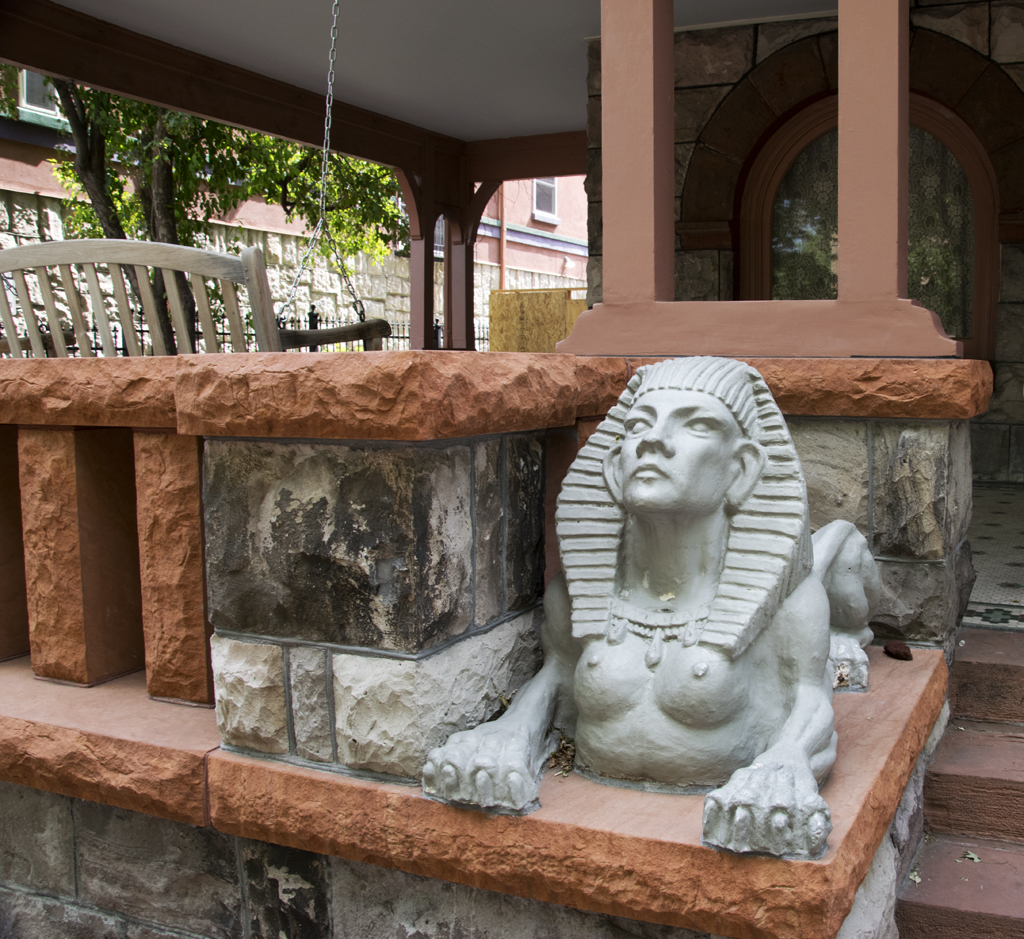 We had to walk behind the house to the gift shop to buy the tickets, which were $11 each. One thing I noticed was that the staff and signage at the house referred to Molly Brown only as “Mrs. Brown”. Well, the first thing our knowledgeable and super-dedicated tour guide… 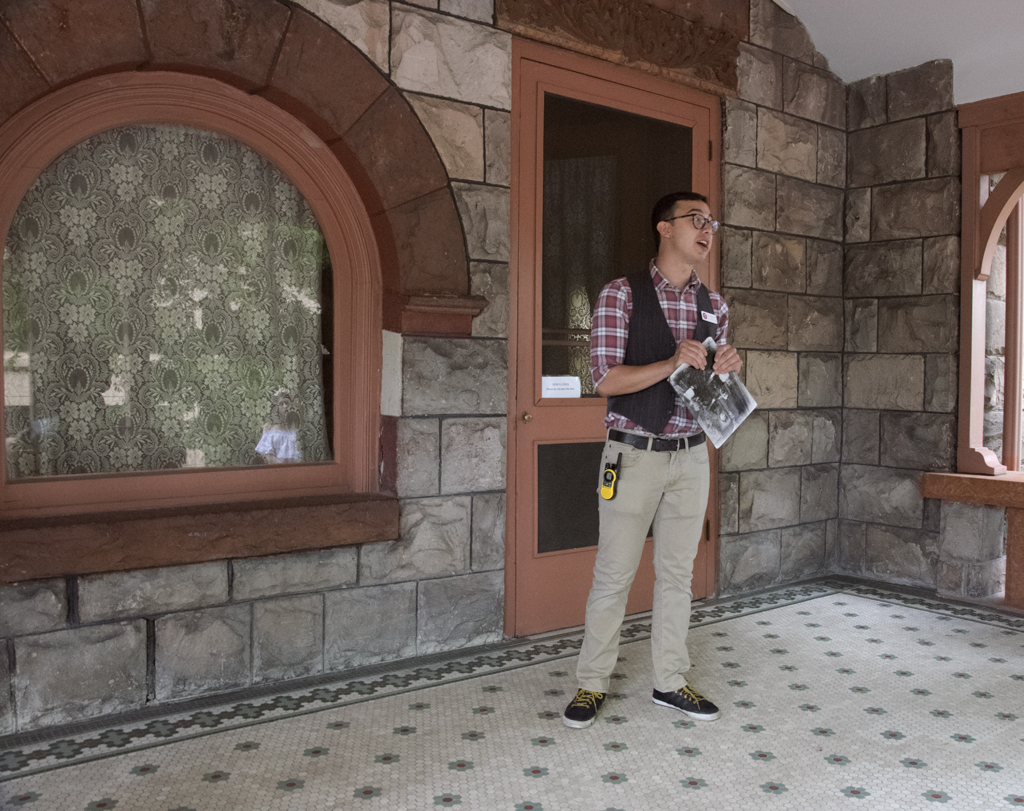 …informed us was that the name Molly was really a misnomer. Her name was Margaret and she was an upstanding member of Denver’s wealthy society, though she had a habit of speaking her mind when other people didn’t think she should.

Her friends called her “Maggie” during her lifetime. After she became famous for surviving the Titanic, newspapers began calling her “The Unsinkable Mrs. Brown”. She used that fame to advocate for causes she believed strongly in, such as women’s and workers’ rights and children’s welfare and literacy.

It wasn’t until the Broadway musical, “The Unsinkable Molly Brown”, came out in 1960 that she became known as “Molly”, almost 30 years after her death. There was also a popular film by that name a few years later. The tour guide said the staff of the museum were torn because they wanted people to know her as Mrs. Margaret Brown, but calling it the Molly Brown House brings in more visitors.

Margaret was originally from Missouri. She moved to Leadville, CO, and worked in a department store as a young woman. She married James Joseph “J.J.” Brown and had two children. She married for love, but J.J. soon made a fortune in mining engineering. Apparently he was a pretty shrewd cookie! Our tour guide said he came up with a way to make a previously closed mine productive again and was rewarded handsomely.

Anyway, the house was built in the 1880s by a couple whose millions came from the silver mines in the Rockies. Once the silver market crashed, they sold the house to the Browns in 1894 for $30,000. By then Margaret was a socialite and became a prominent figure in Denver society. The tour guide said she and her husband separated and lived their own lives after a while, though they stayed married. She traveled a lot and rented the house out to other wealthy families when she was away.

The house was sold by the children after the Browns’ deaths and the furnishings sold off as well at an estate sale. A nonprofit, Historic Denver, formed in 1970 when the house was condemned and was on the docket to be destroyed. It had been changed a lot over the years, but now it’s been returned to its original Victorian style. I was very interested to learn that Historic Denver, which runs the museum, has managed to locate and buy back a third of the Brown’s original household belongings.

For example, this bookcase: 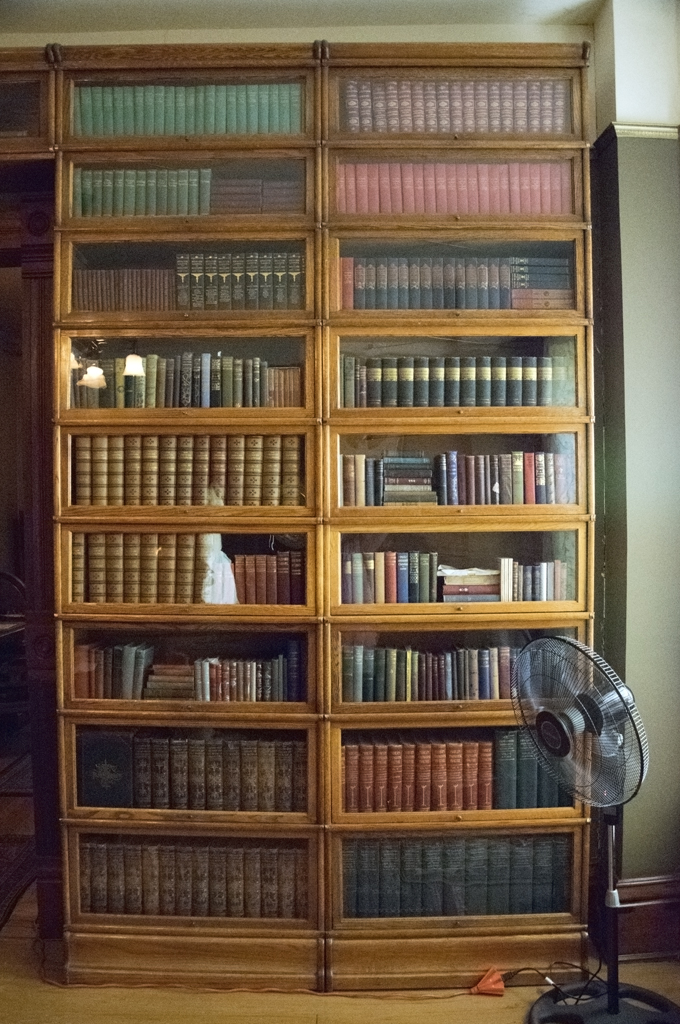 The house was much smaller than I would have thought for a wealthy family. And it has period furnishings, including this beaded lamp and the wallpaper behind it. The wallpaper is actually formed out of a heavy paper and painted gold, which looked metal at first glance. That was by design! 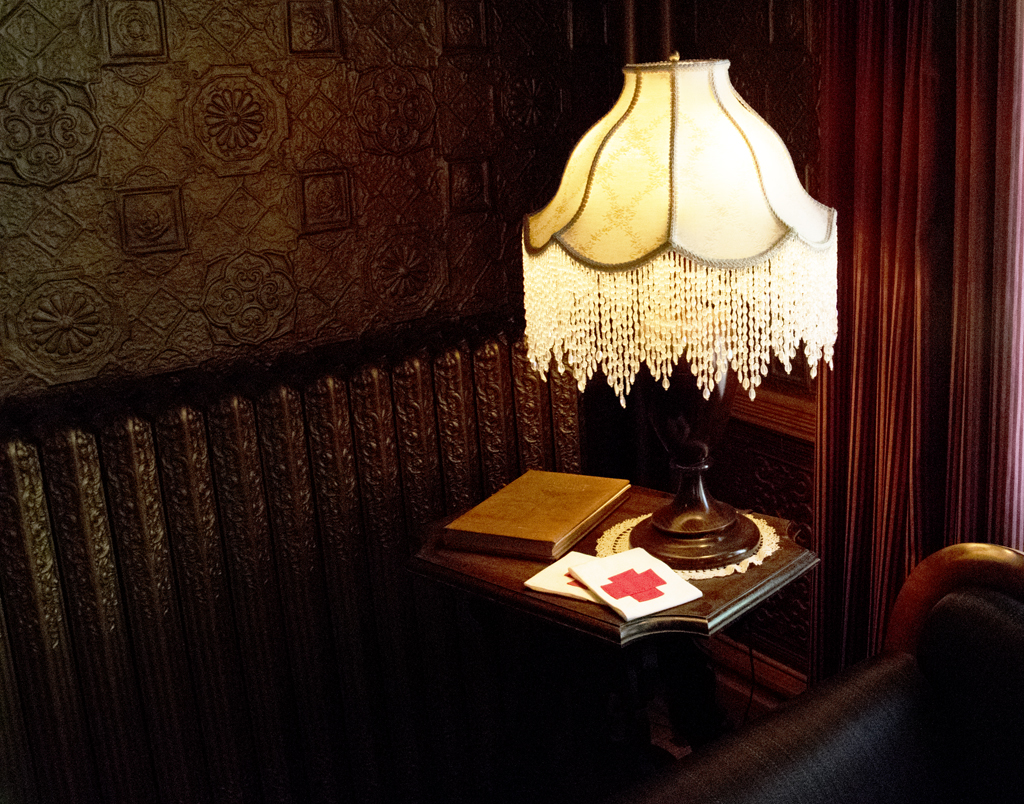 The house is famous for its stained-glass windows: 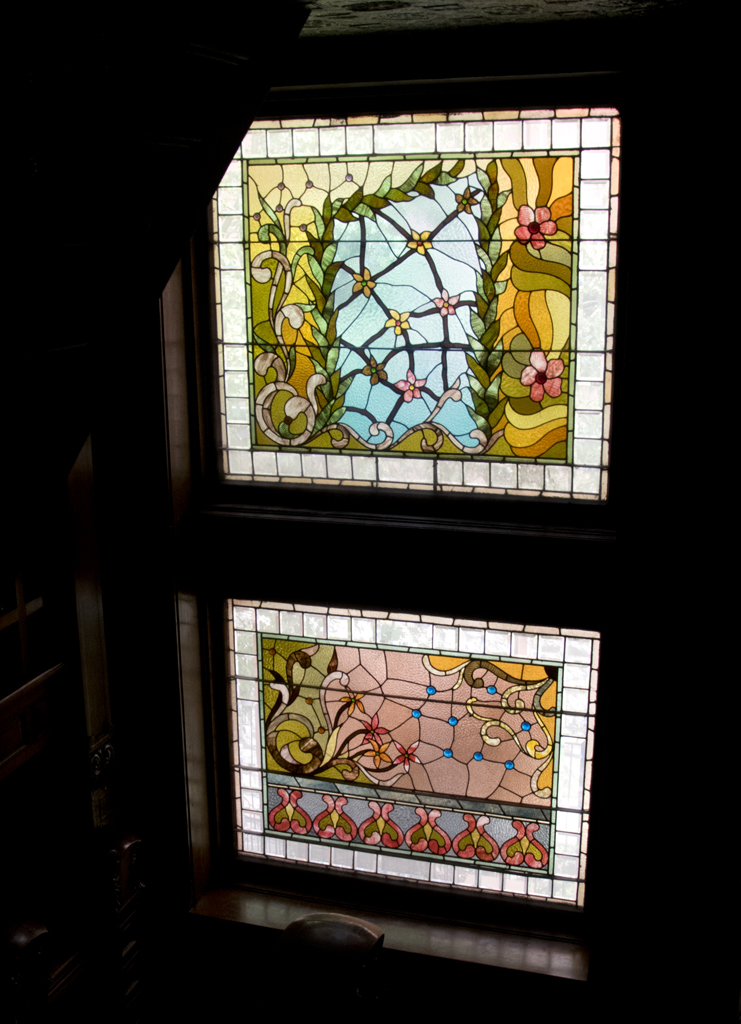 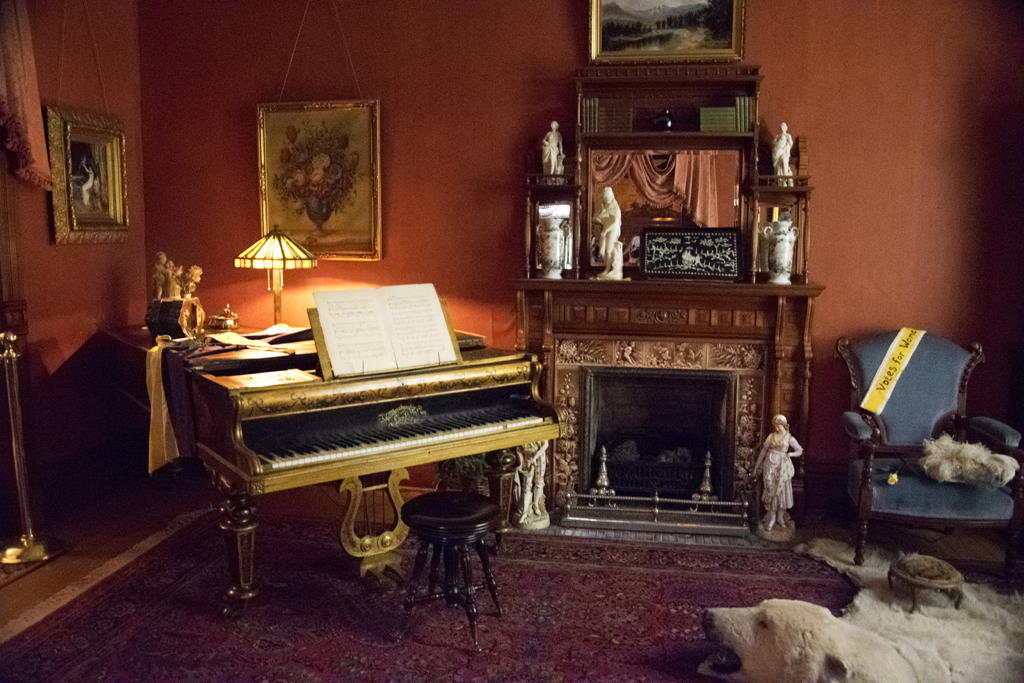 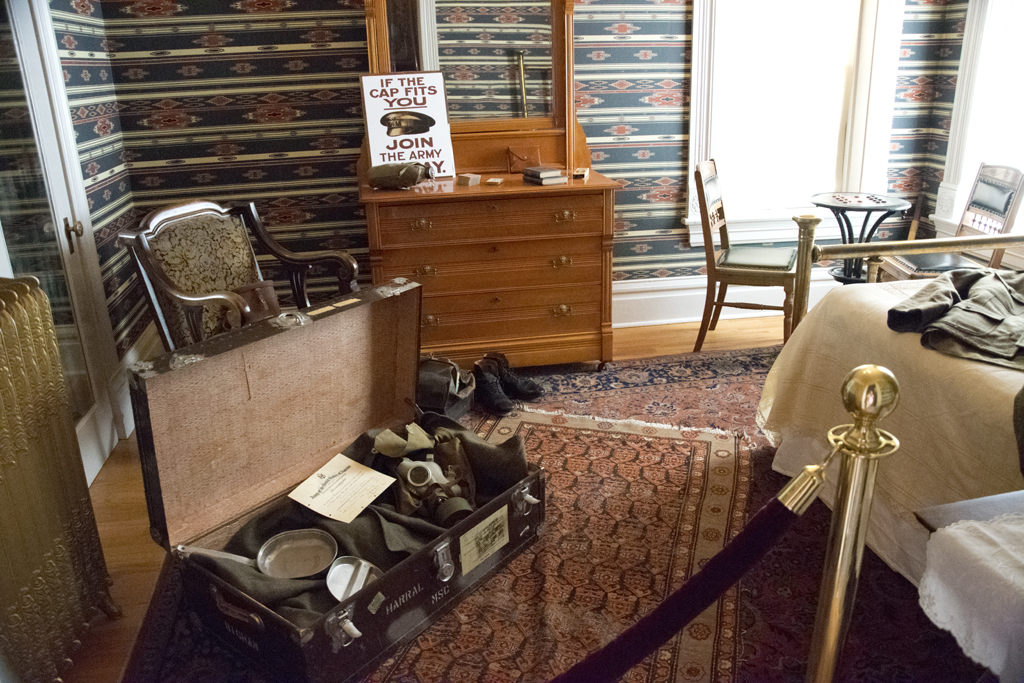 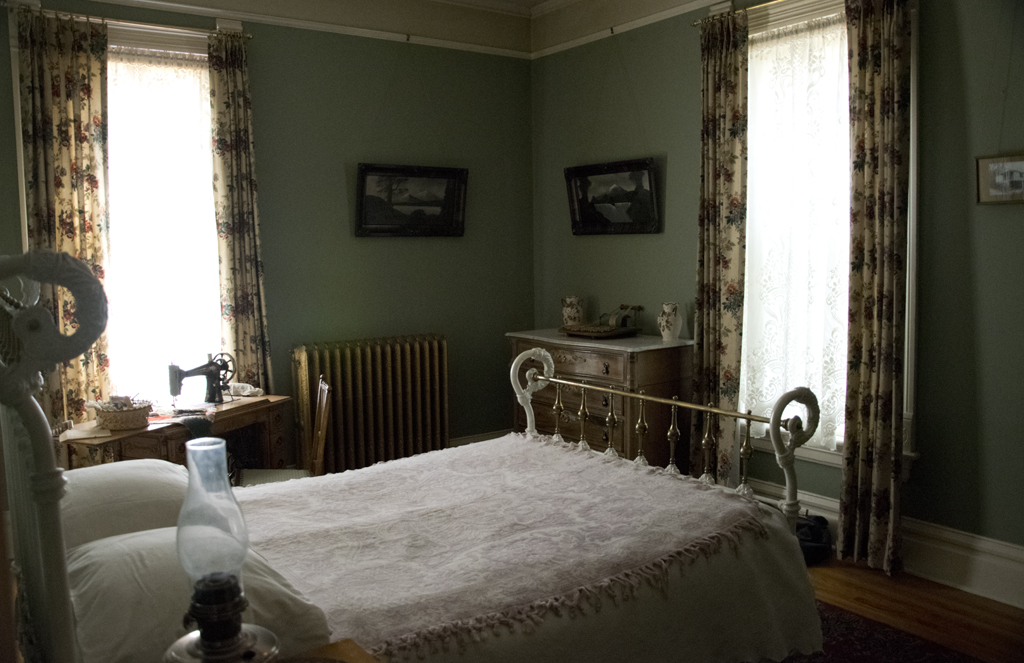 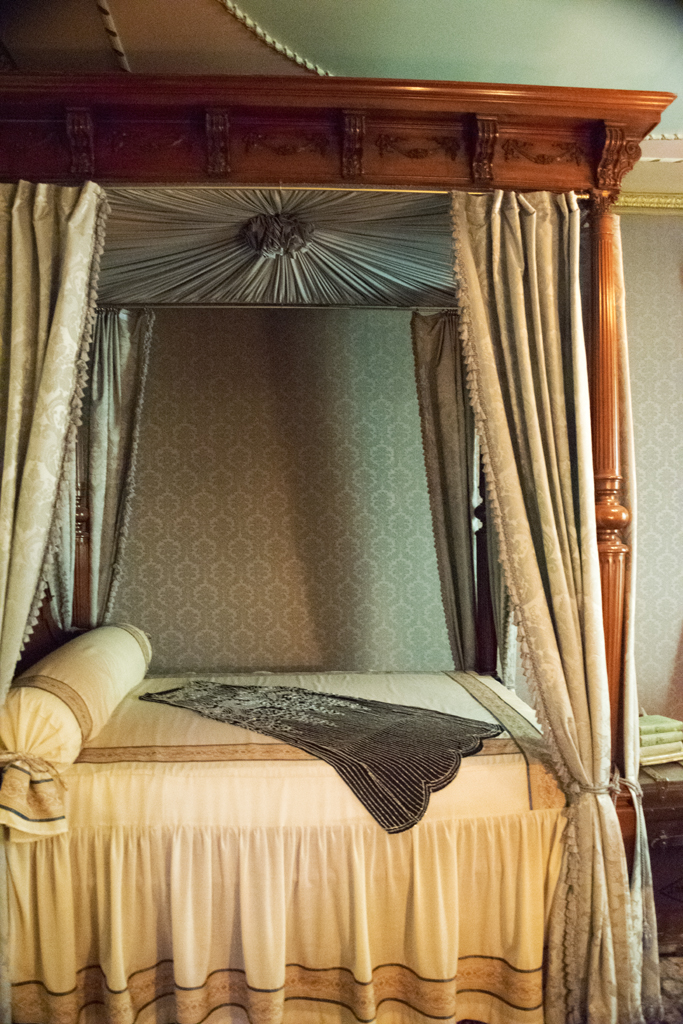 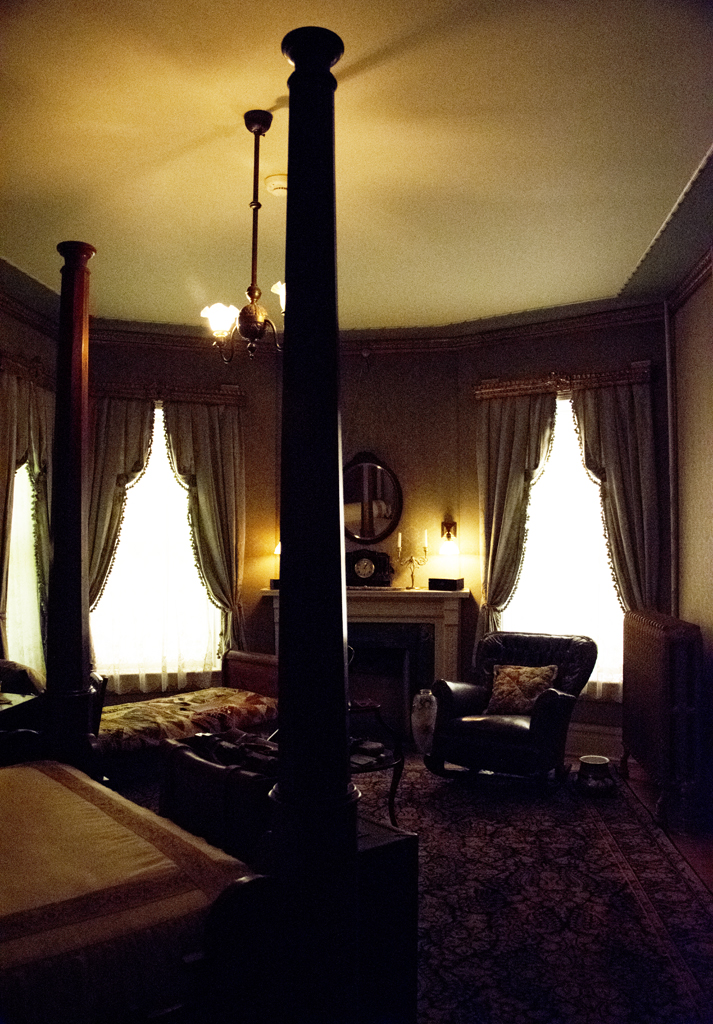 It was one of the first generation of houses to have indoor plumbing: 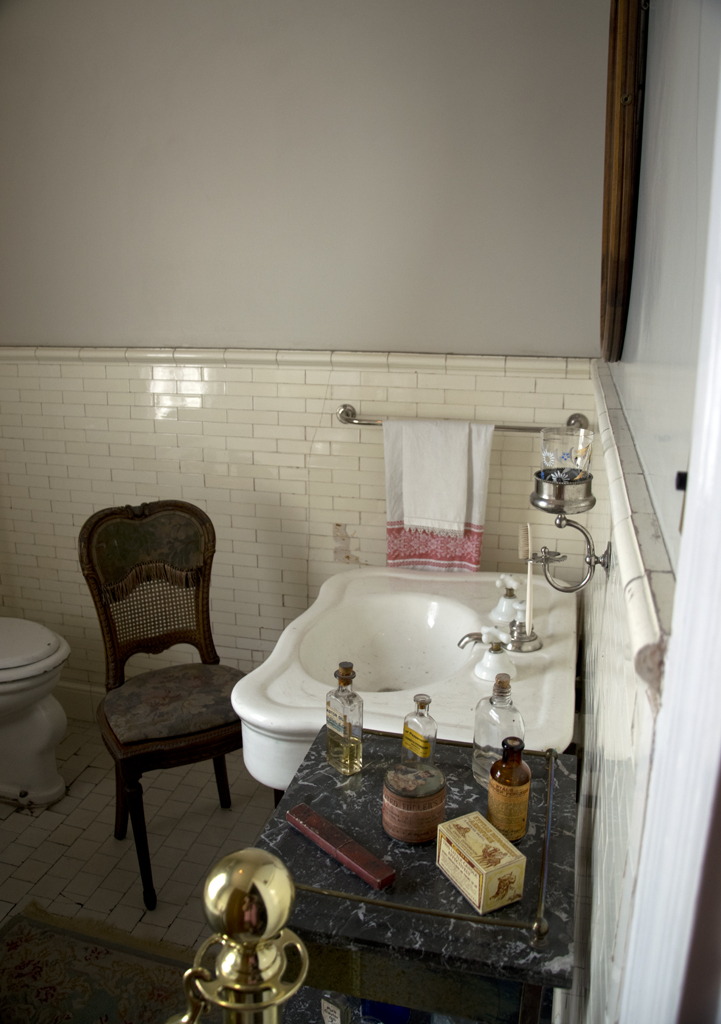 The servants’ quarters on the top floor: 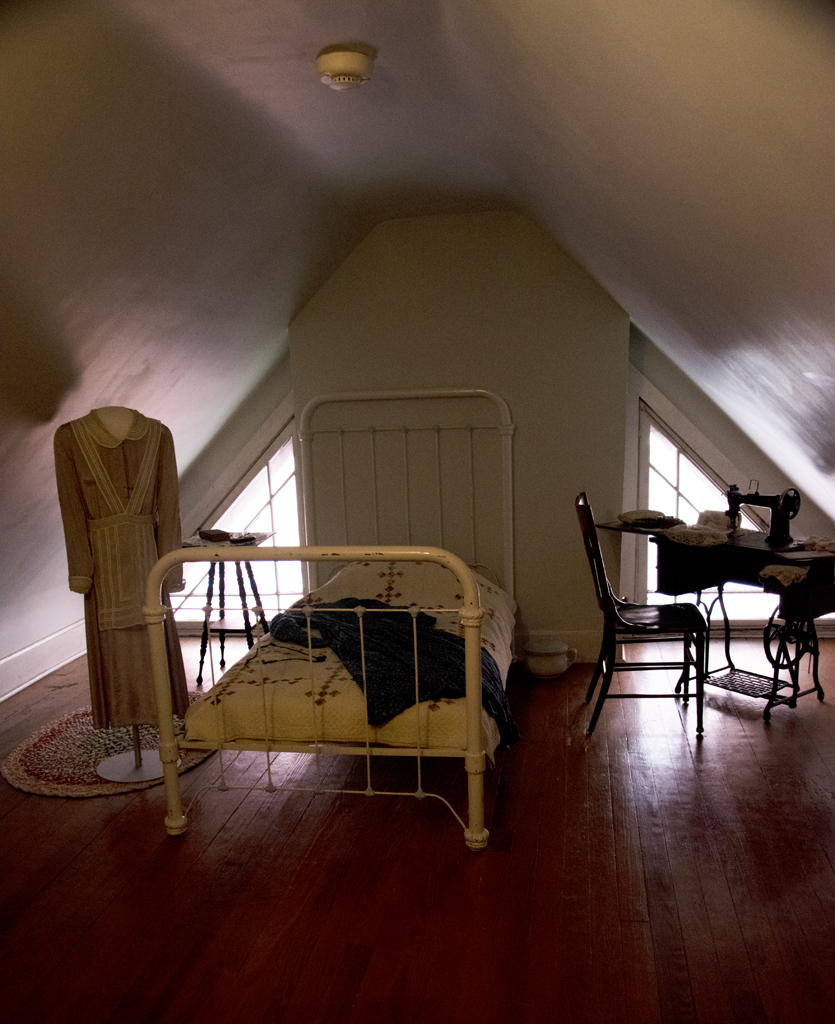 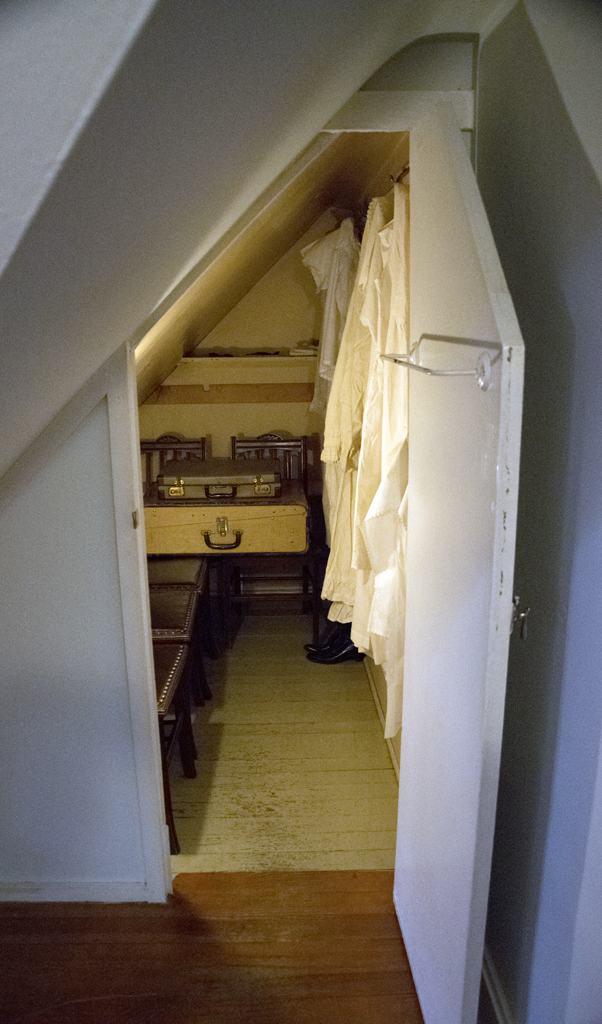 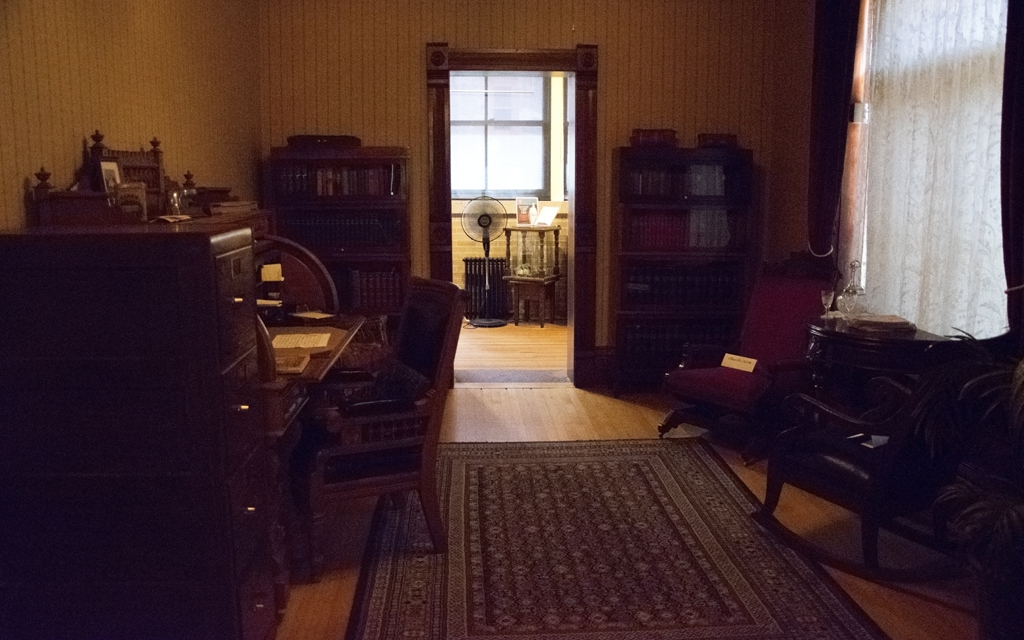 Of course I was interested in the kitchen (ignore the electric fans – we had a hot summer): 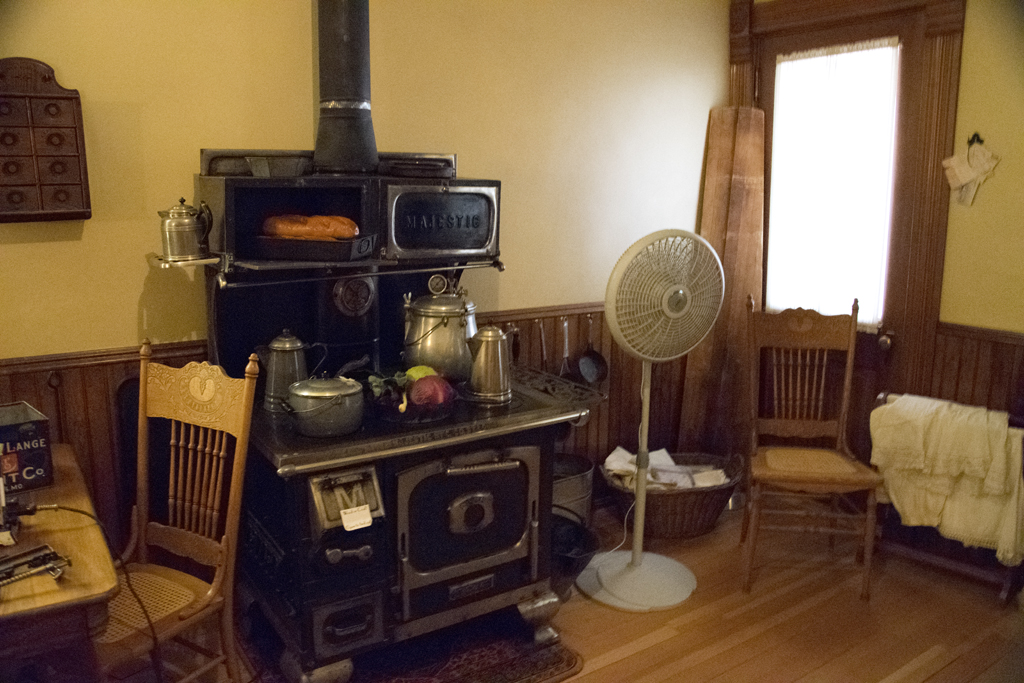 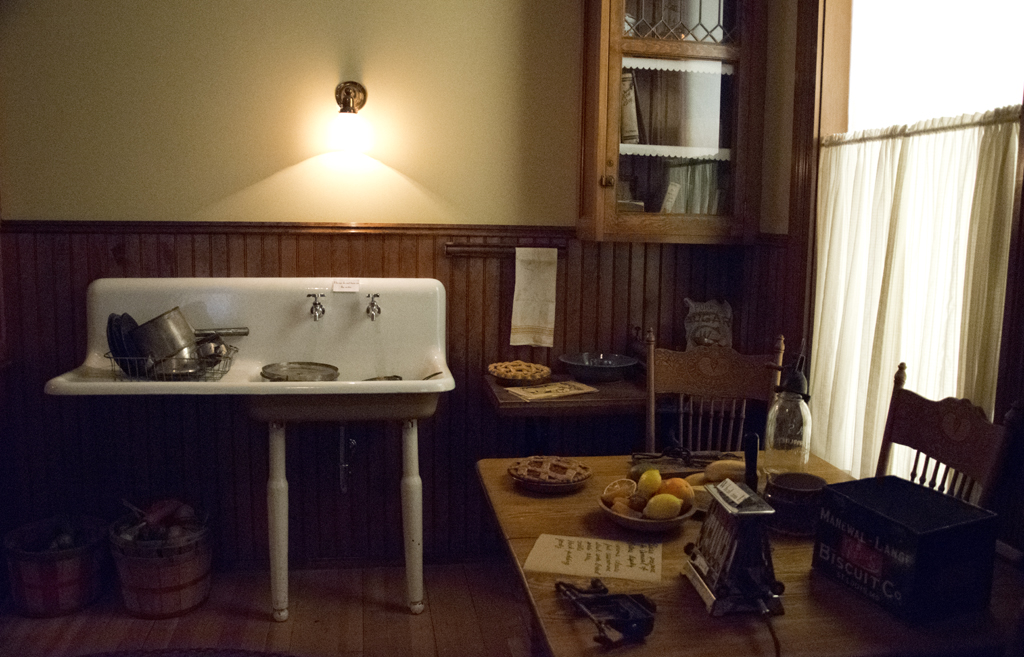 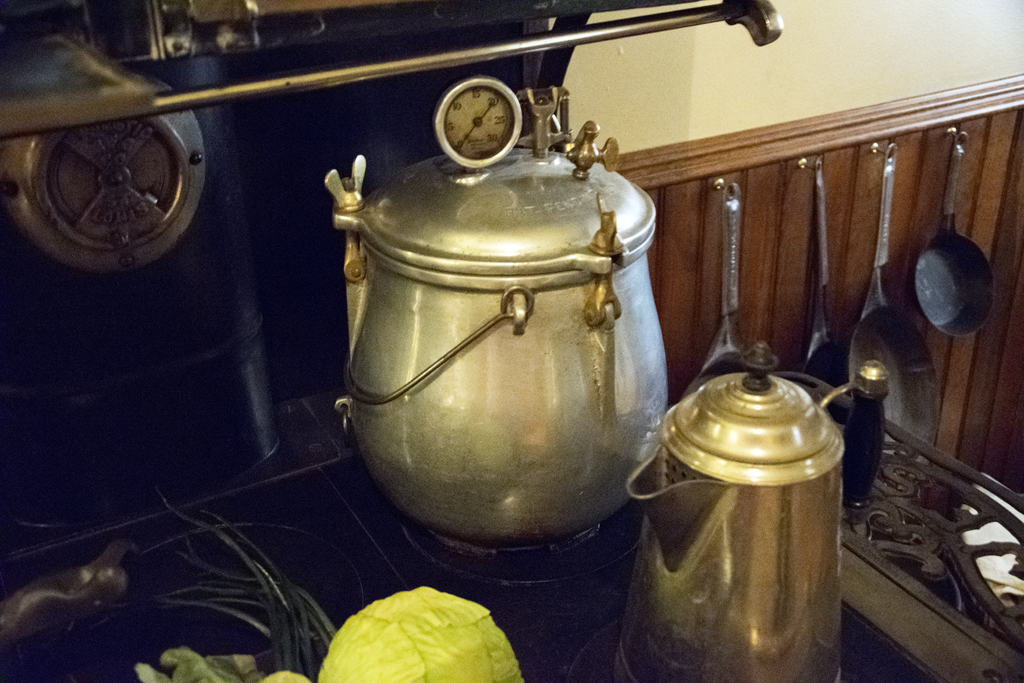 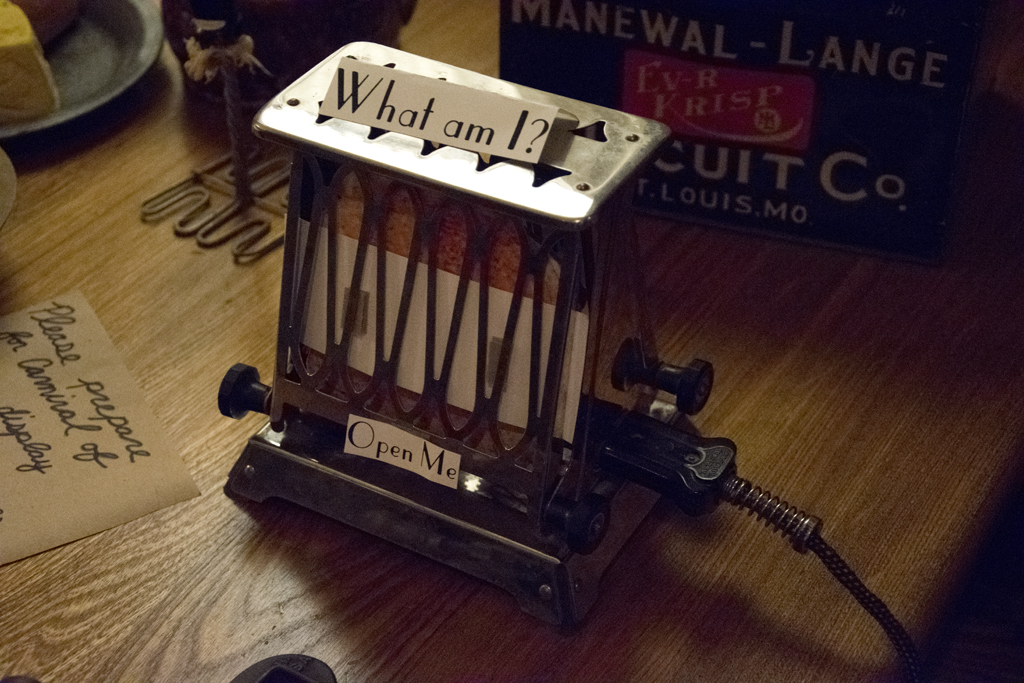 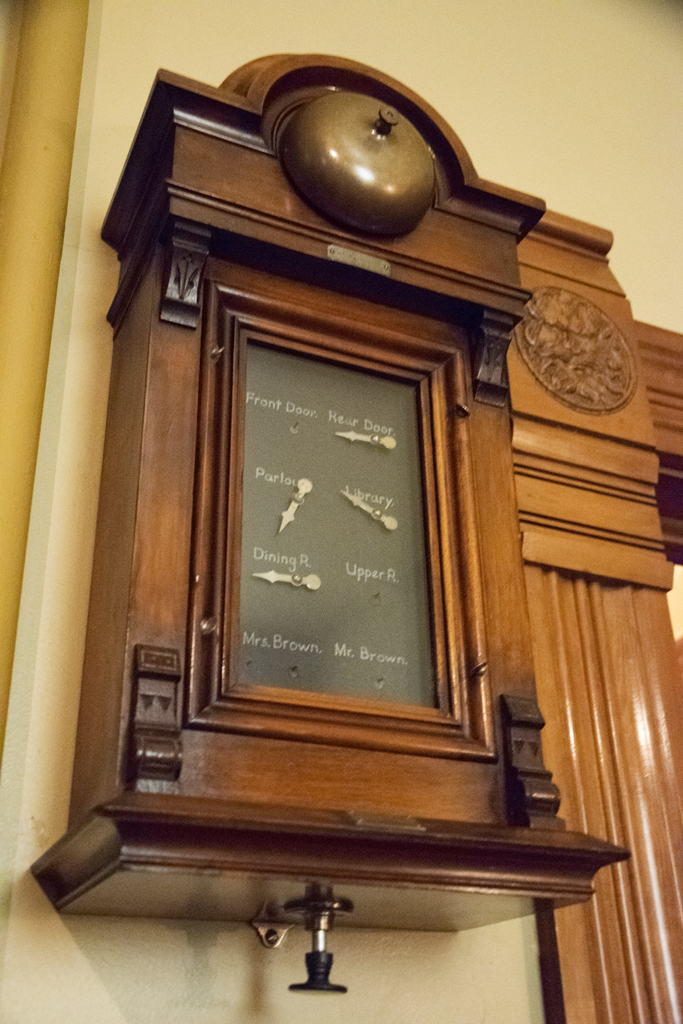 Just off the kitchen was the formal dining room. The tour guide pointed out the custom-painted ceiling. 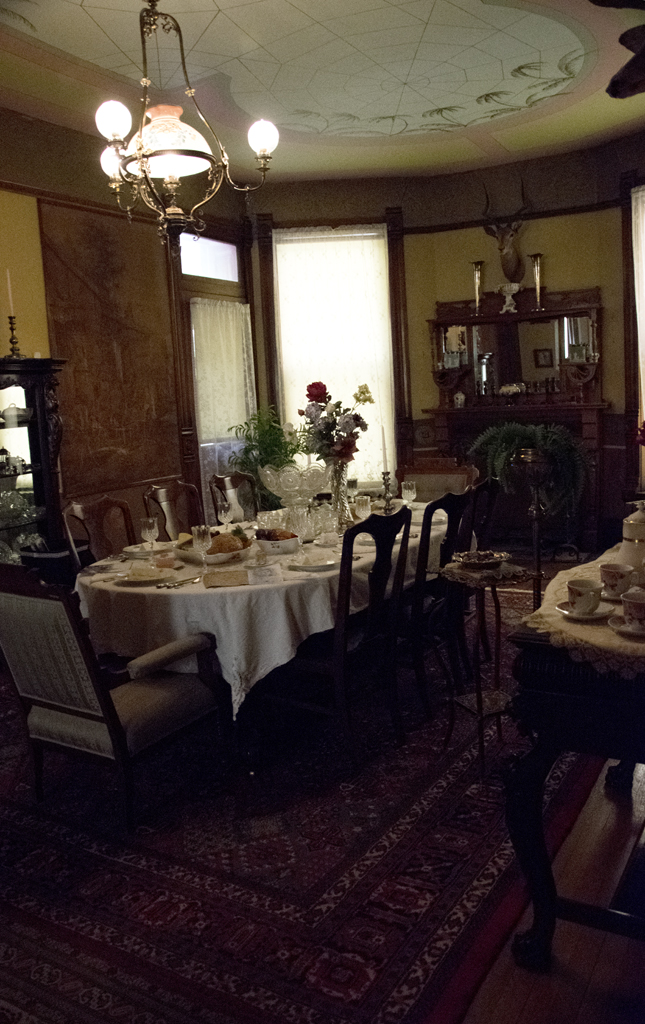 Then he said, “I know what you’re thinking: ‘Why in the world would someone pay an artist to paint a spider web on their dining room ceiling?’.” He was right; I was thinking that. “It’s not a spider web. It’s the artist’s conception of what a glass-ceilinged solarium would look like.” Well, that explained it, but I still think I could do better than that!

Anyway, it was an interesting tour and I would recommend it, especially if you’re in Denver and the weather is bad. The staff is very knowledgeable and proud to be there. I’m glad I learned a little more about the woman Margaret Brown and I appreciate knowing she was not the reckless, bawdy character of stage and screen, but a respectable woman who did her best to make this world better. 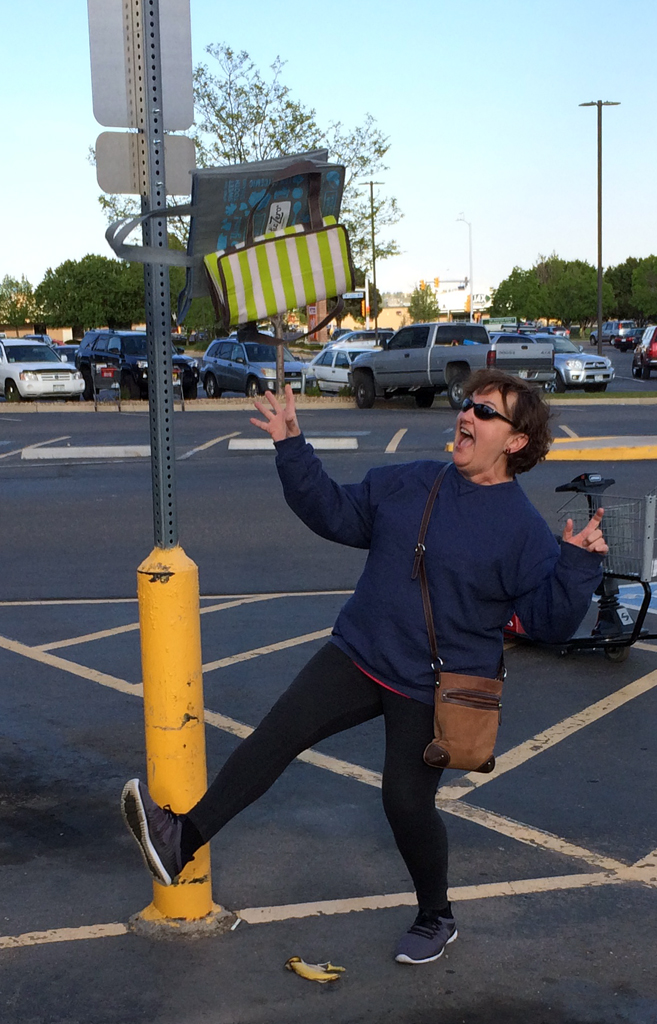