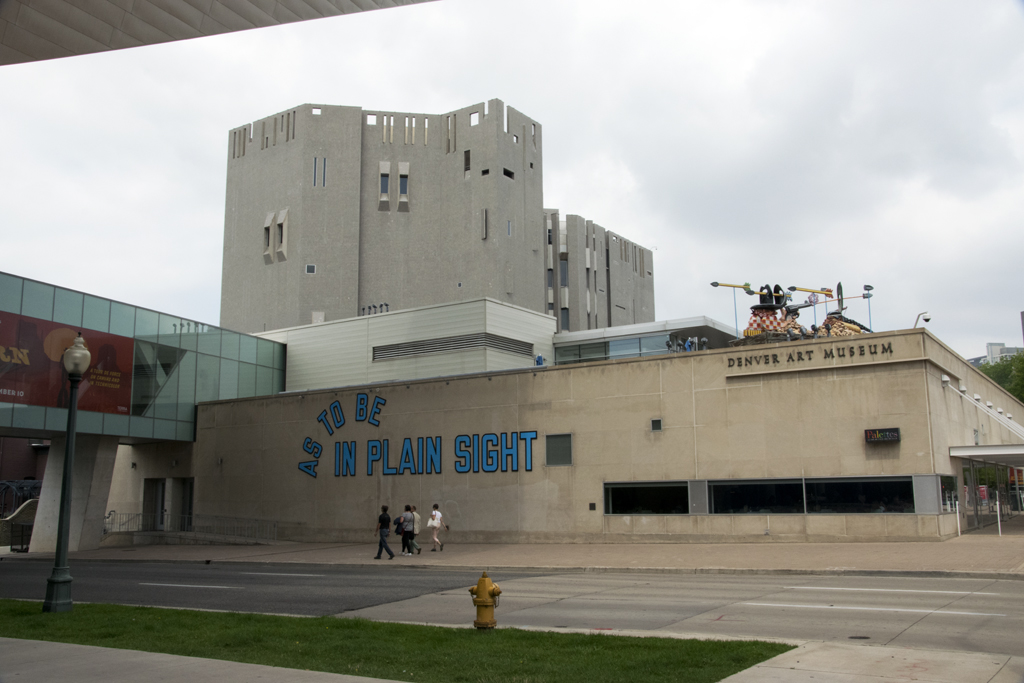 The Denver Art Museum, charmingly abbreviated DAM, is in downtown Denver, of course, not far from the Capitol and Civic Center Park. It’s part of the Civic Center Cultural Complex, which is a mainly pedestrian zone that also gives you access to the Denver Public Library and a few other museums. 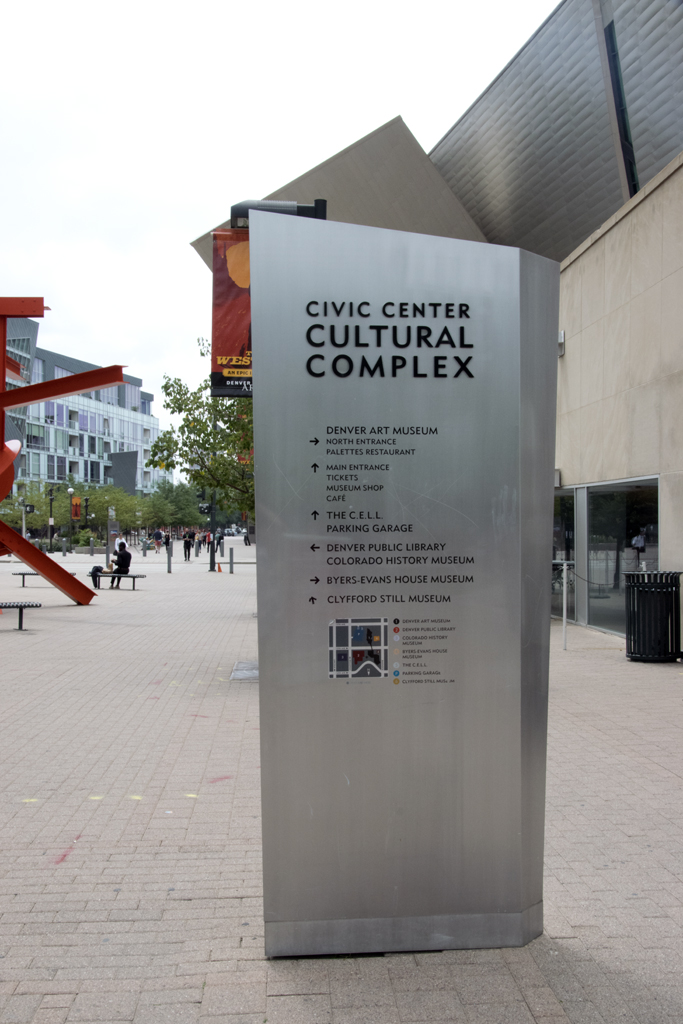 The whole complex is fairly easy to walk to if you visit the Capitol building, and it’s all downhill from there!

DAM itself actually consists of two buildings: North and South. The North Building, which opened in 1971, was designed by Italian architect Gio Ponti, and has 24 sides, including two towers. It was DAM’s first location where they could display their entire collection under one roof. You can see it in the background in this shot:

To me it looks like a Medieval fortress, but I’ve had other people say they think it’s ultra-modern in appearance. What do you think? Right now, that building is closed for renovation. I can’t wait to get in there to see it when it’s finished.

The text painted on the building, “As to be in plain sight” is actually a work by Lawrence Weiner. Look him up; he has some interesting perspectives on textual conceptual art.

For now, the museum’s 70,000+ pieces of art are all under the roof of the South Building, or the Frederic C. Hamilton Building (no relation), designed by Daniel Libeskind. Its 146,000 square feet opened in 2006. You can see part of it in the photo above in the foreground. That’s only half of the building, though; you have to walk across the skywalk to the other half where the entrance is. The place is HUGE!

Here’s a closer look at the very-un-politically-correct sculpture atop the South Building in the photo above: 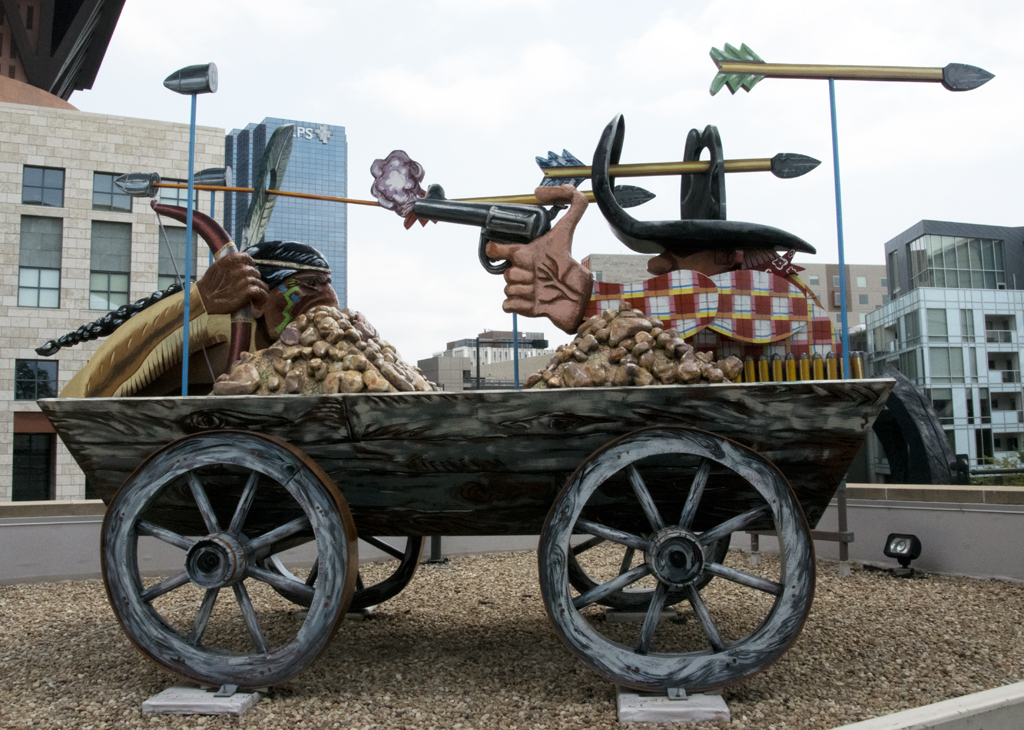 I’m kind of surprised this sculpture is still on display. It’s been deemed racist and insensitive in many ways. Artist Red Grooms was commissioned to produce it back in the 1980s and has been protested ever since. It was originally installed in a different location, and I’m not sure how it ended up here. I looked up other works by Grooms and was impressed by his pop art; this one, hmmm, I could do without it. Reminds me of Saturday-morning cartoons when I was growing up.

Anyway, here’s a shot of the entrance to the Cultural Complex. The library is on the left (it isn’t really leaning – that’s a camera-lens effect): 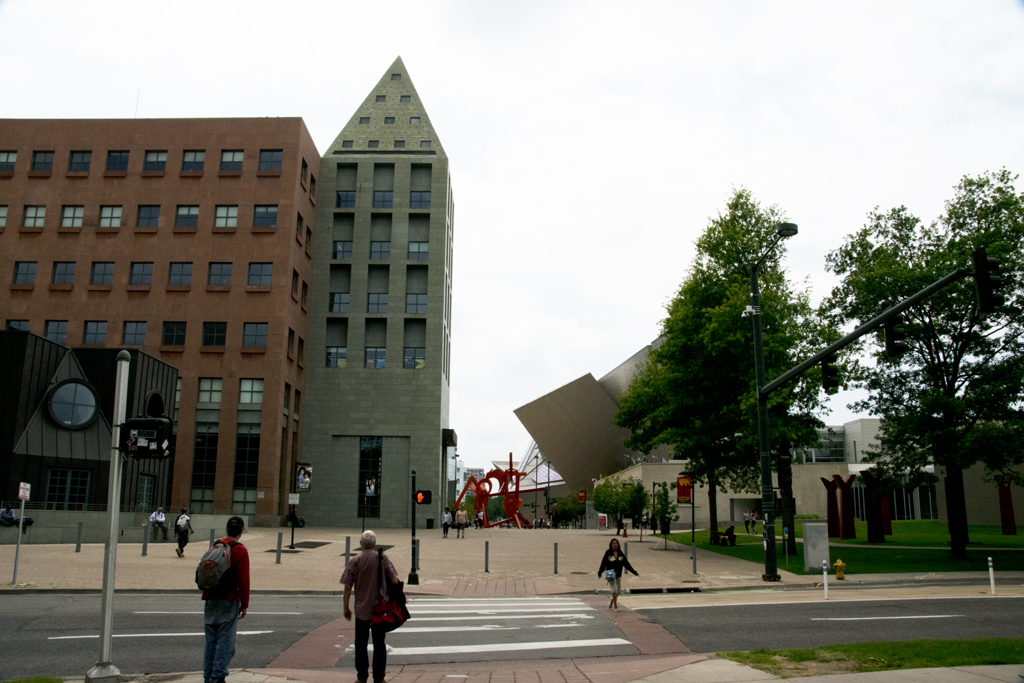 That weirdly-slanted building on the right is the South Building. Note the red outdoor sculpture – this is so typical of Denver. Love that they set aside money from each construction project for public art!

Here’s another shot closer to the South Building with more public art: 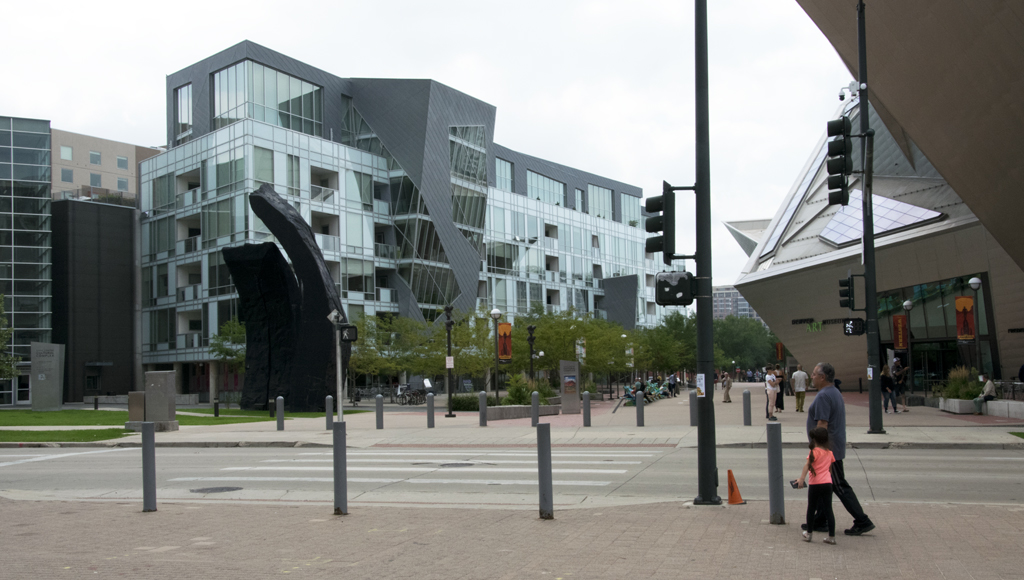 If you squint, you can see some turquoise colors right there in between the buildings. These are rocking chairs in which people are lounging. The chairs are also an art installation and create music when rocked. The chairs are collectively called “La Musidora”, which is a portmanteau of the Spanish words ‘la musica’ and ‘la mecedora’ (‘music’ and ‘rocking chair’). Artists: Héctor Esrawe and Ignacio Cadena of Mexico City. The music was very calming.

And just outside the museum door is Coosje van Bruggen and Claes Oldenburg’s “Big Sweep”: 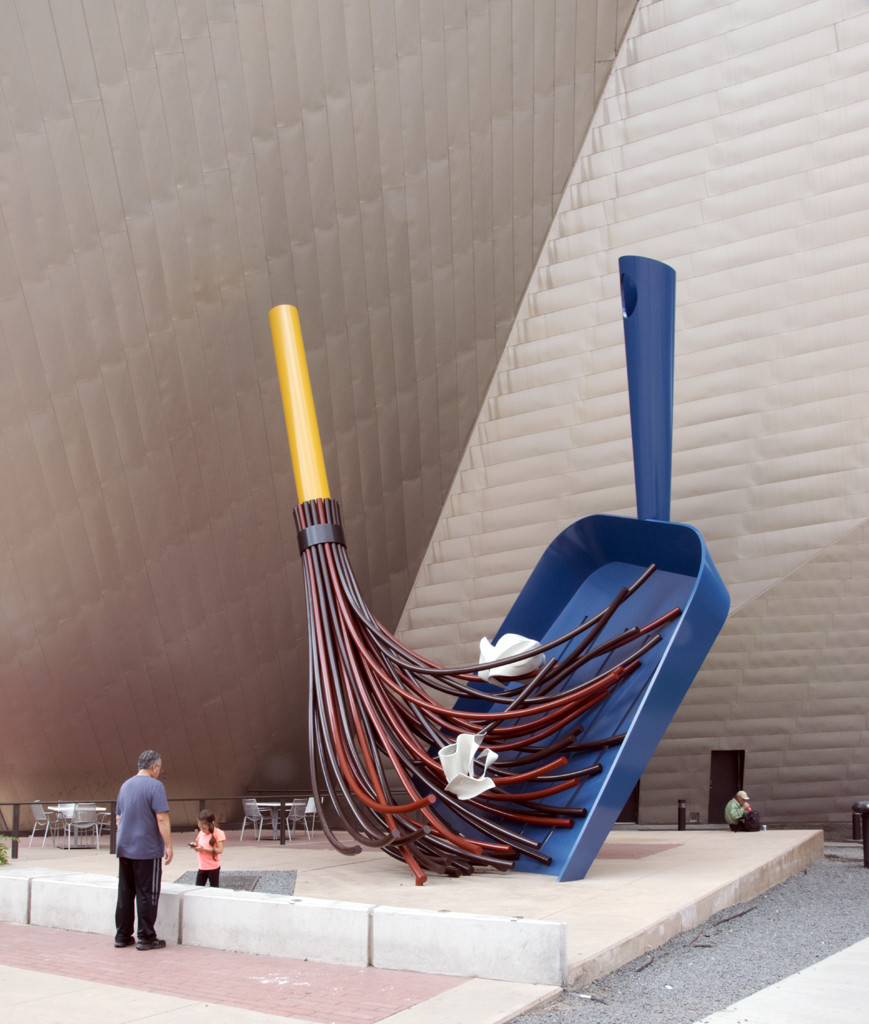 Ok, one more public art piece. At the far end of the South Building are some really cool giant cow sculptures:

They are by Dan Ostermiller and are incredibly realistic – except for their size, of course! You can certainly tell Mr. Ostermiller’s father was a taxidermist! 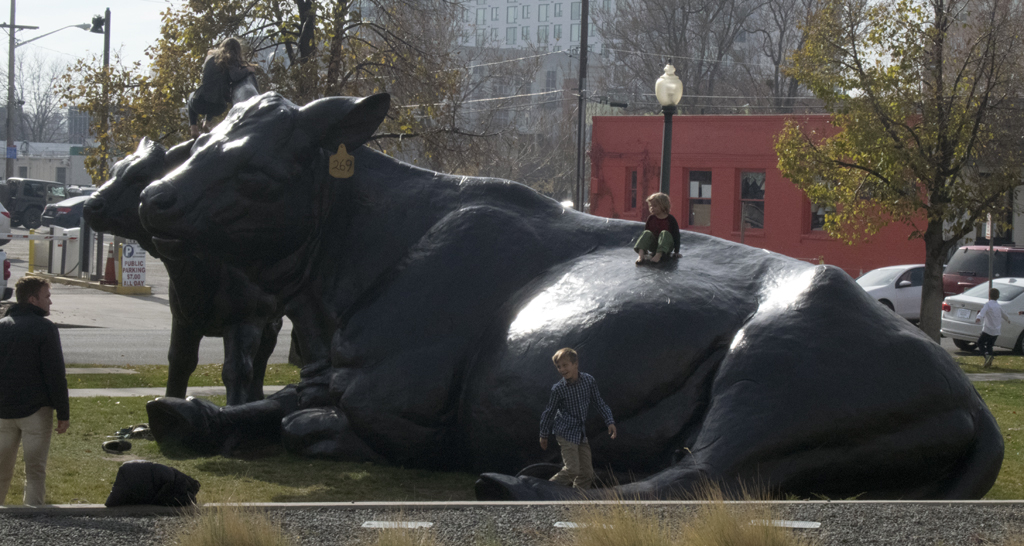 Now for the inside – I have lots and lots of photos of the museum’s interior. However, you won’t see nearly the number of pictures it would take to show you all of their exhibits, partly because there just isn’t space on a weekly blog, and partly because I didn’t even see everything. I told you the place is HUGE, and it will take a few visits for me to cover everything. But here is a sampling:

How about a stairwell painting by Matthew Brannon, playfully titled “Last to Know”: 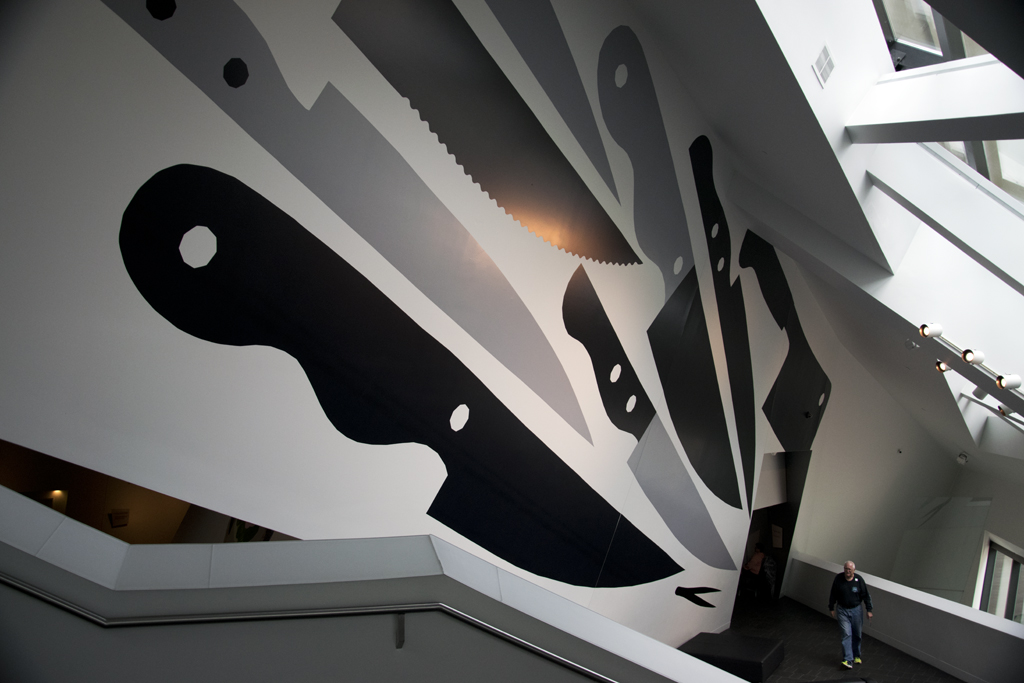 Below you can see the recessed LED lights in another stairwell, which was also an artist’s installation. The lights are actually digital number readouts and they changed color and brightness over a period of time. Unfortunately I didn’t make note of who the artist was. Sorry! 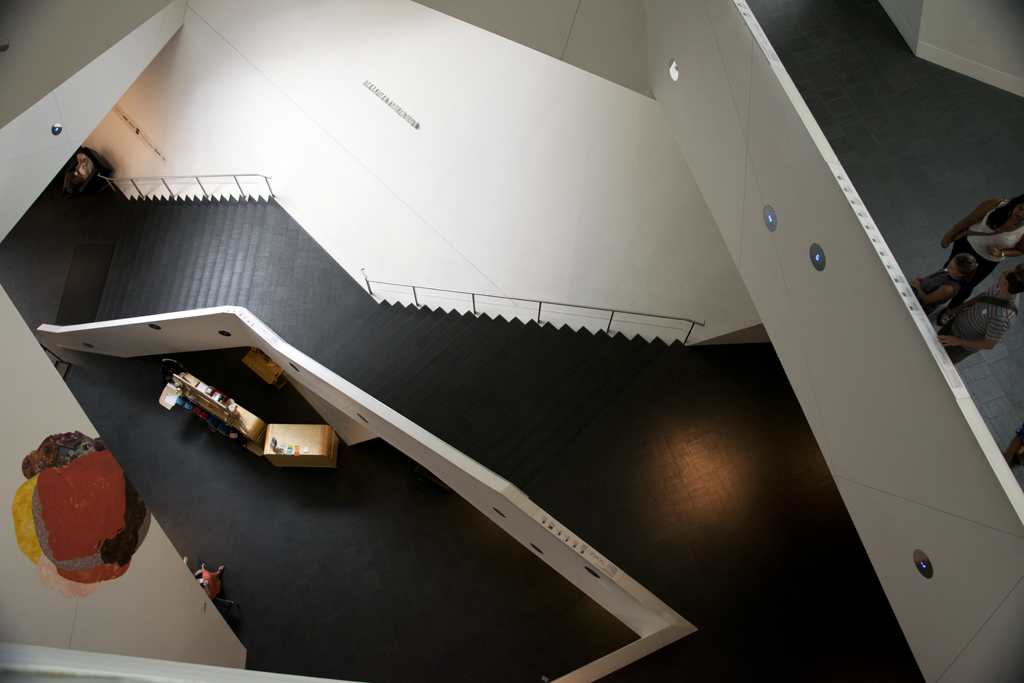 When I was there, the big current exhibit was “The Western: an Epic in Art and Film”, which included movie memorabilia and Western video clips from The Great Train Robbery (1903) all the way up to Easy Rider (1969). I guess that was a Western if you think about it! 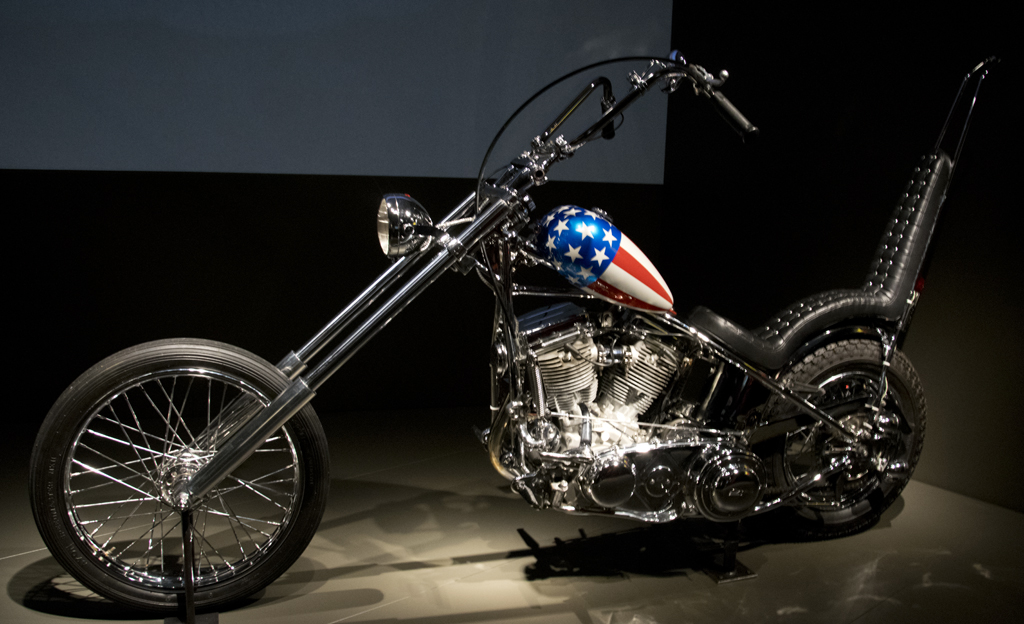 There were a lot of pieces of every genre, not just movies. There was Theodore Waddell’s Abstract Angus painting, which I thought very lovely. It’s here on the right: 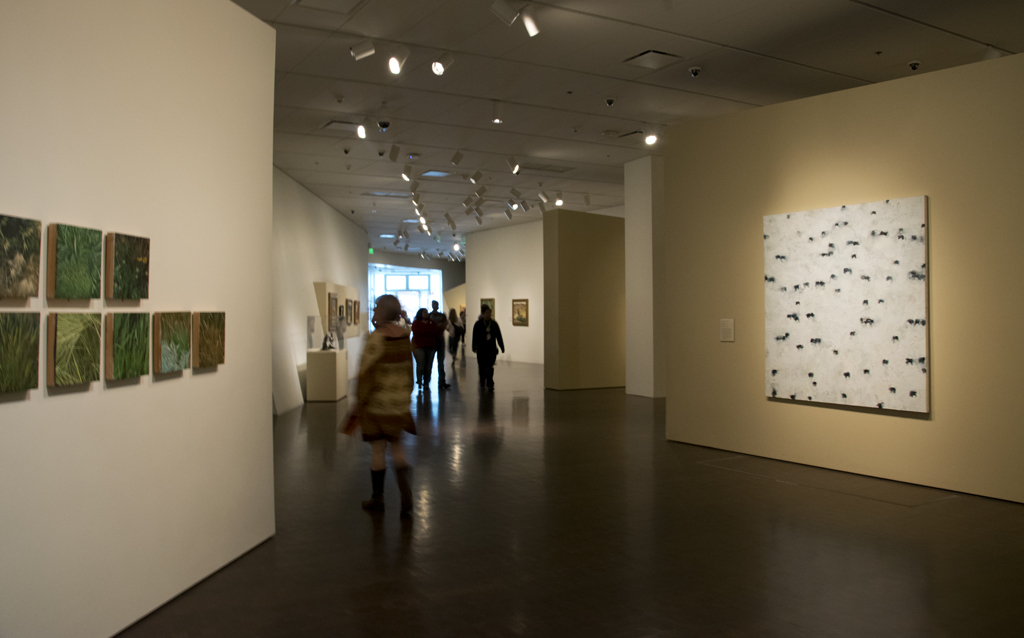 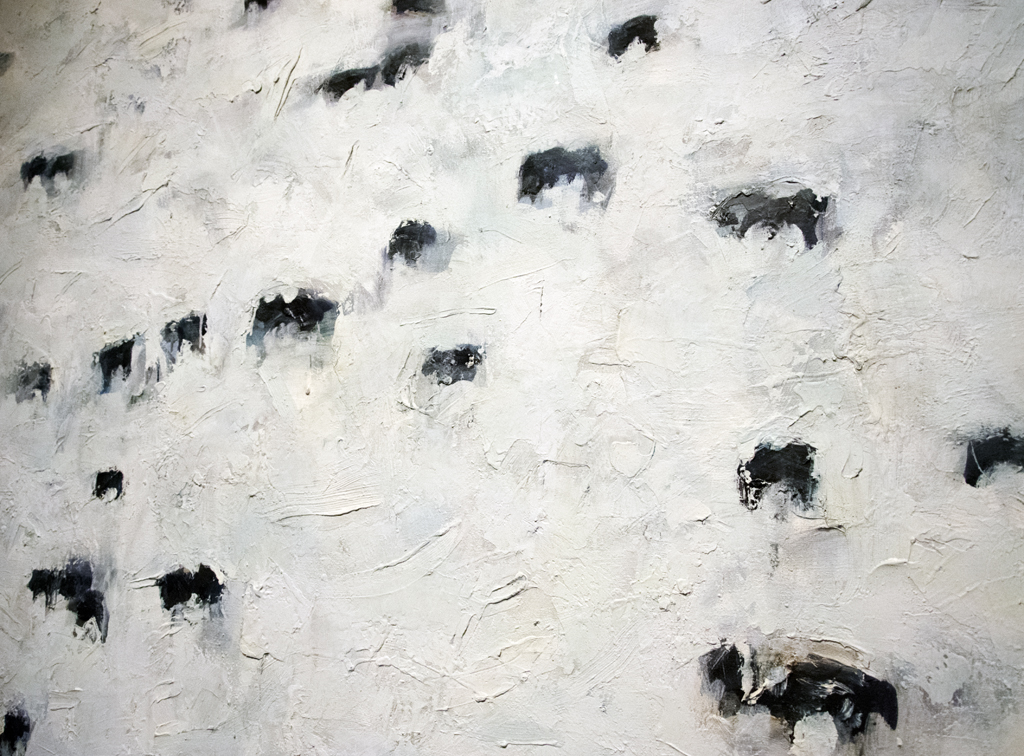 And no Western art exhibit would be complete without a Remington: 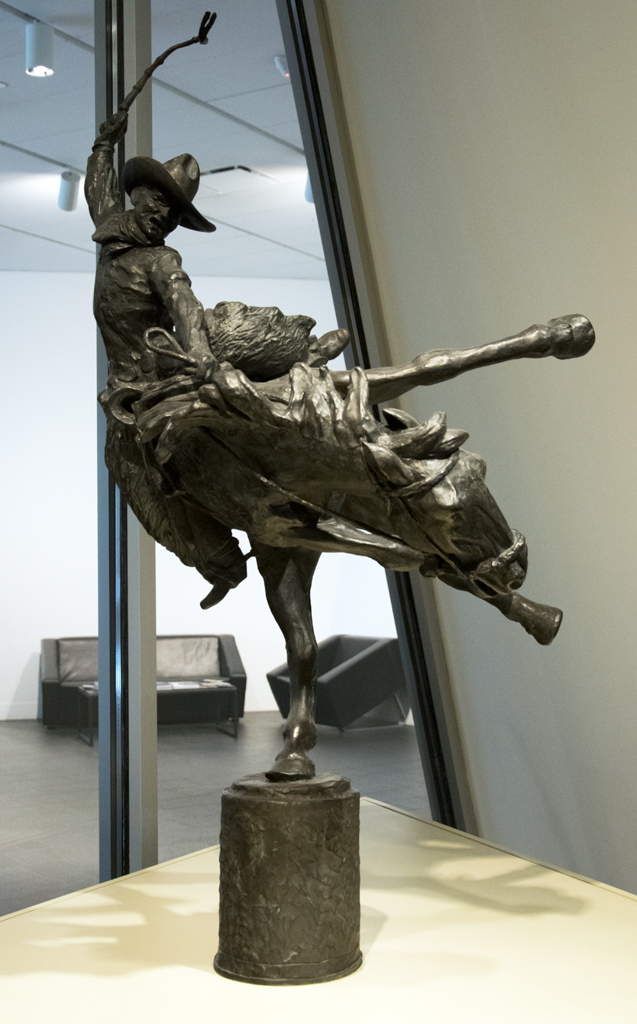 That day there was also a small exhibit called Word Dance, which dealt with printing and words in general. My fave from that was Alice Attie’s “Strolling and Wandering”: 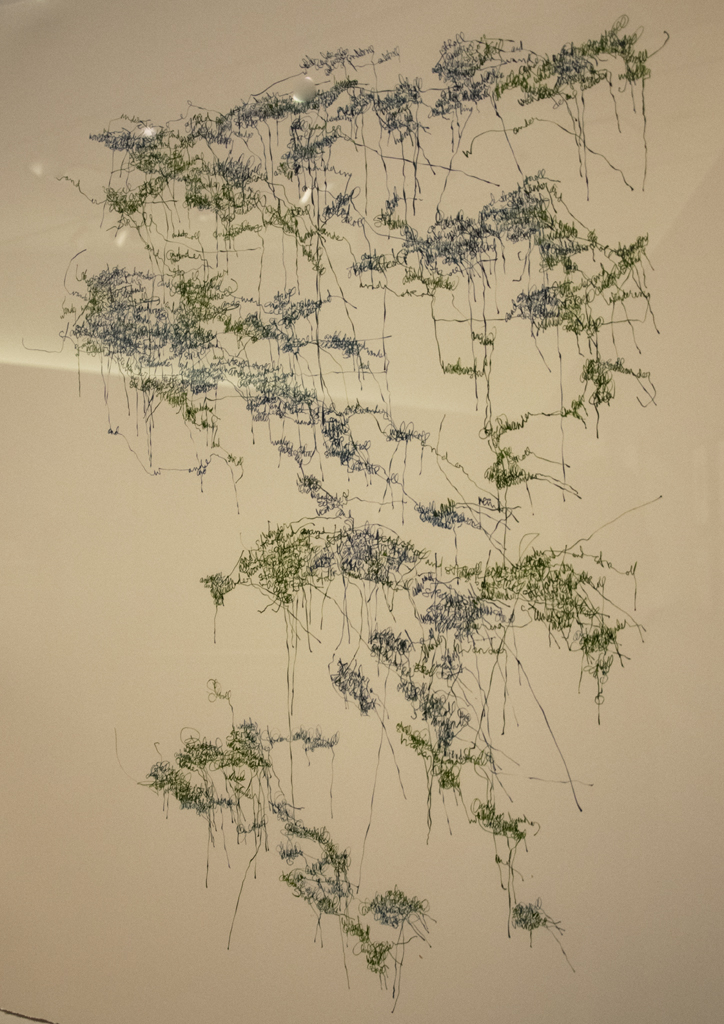 A closer look at this piece reveals that the “drawing” was actually the words “strolling” and “wandering” written over and over.

The museum had so much more that I saw and didn’t see, including ancient Greek artifacts, Asian works, African art, modern and contemporary collections, you name it. As I said, it will take multiple visits to see it all. Not only that, the current exhibits change often, of course, so there’s always a reason to come back. The entry fee is $24 for adults, which is well worth the price, and there are discounts for kids, students, seniors, etc. Also, every first Saturday of the month, admission is free!

I’m definitely planning to return, and I’m excited to see that a Degas exhibit is coming next month! I’m pretty sure this post is Part 1… 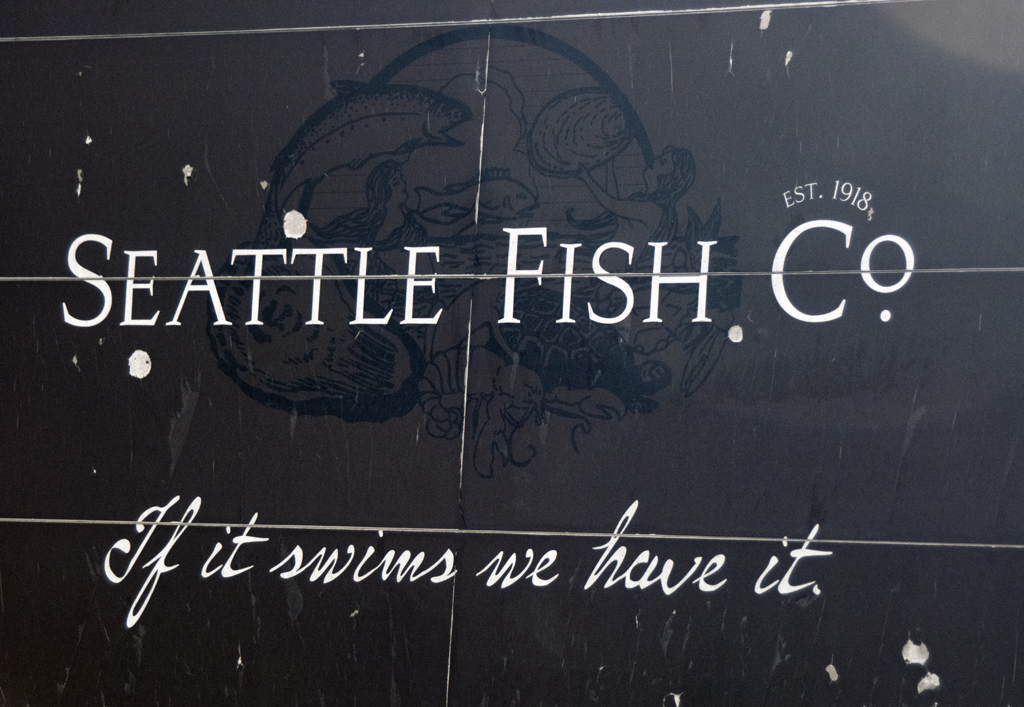 1 thought on “Denver Art Museum, Colorado, and The Western Exhibit”