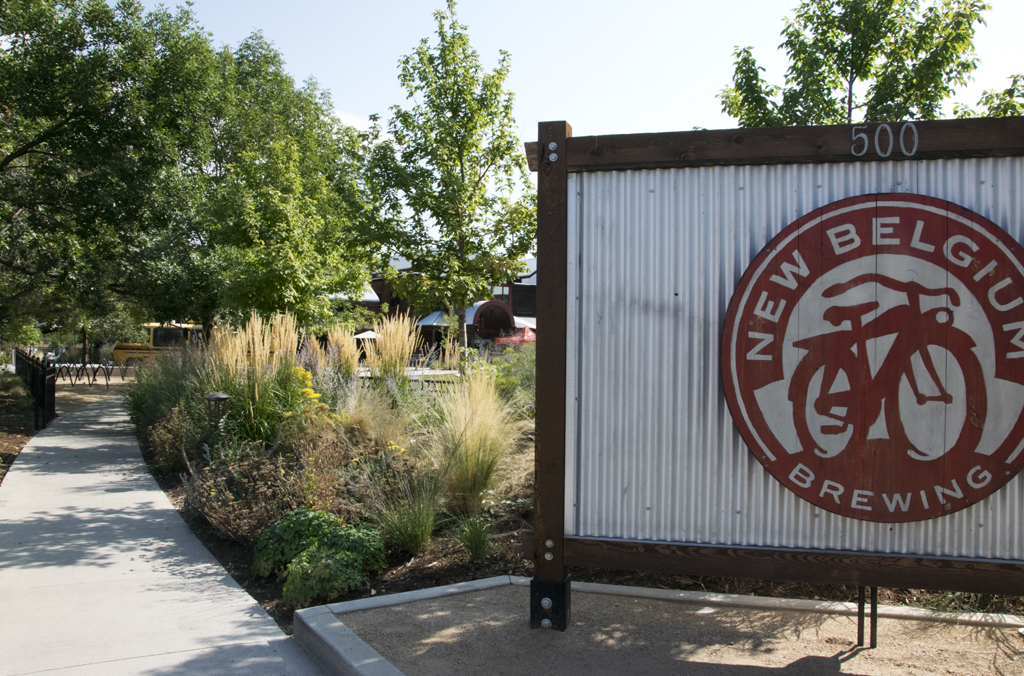 At the suggestion of pretty much everybody we’ve met since moving to Colorado, we drove an hour north of Denver to Ft. Collins to visit the New Belgium Brewery and take the free tour there. You probably have heard of Fat Tire beer, which is New Belgium’s flagship craft brew. If you want to know the difference between a craft brewery and a larger one, check out my Coors Brewery Tour post.

We really should have signed up for the New Belgium tour online, which the website encourages visitors to do. But we happened to be more or less in the neighborhood and showed up before opening on a Sunday morning. I love going places to photograph on Sunday mornings because generally there are very few people around to get in my shots. Same was true that day, and the weather was perfect to boot!

There couldn’t be a more inviting outdoor area at this place. 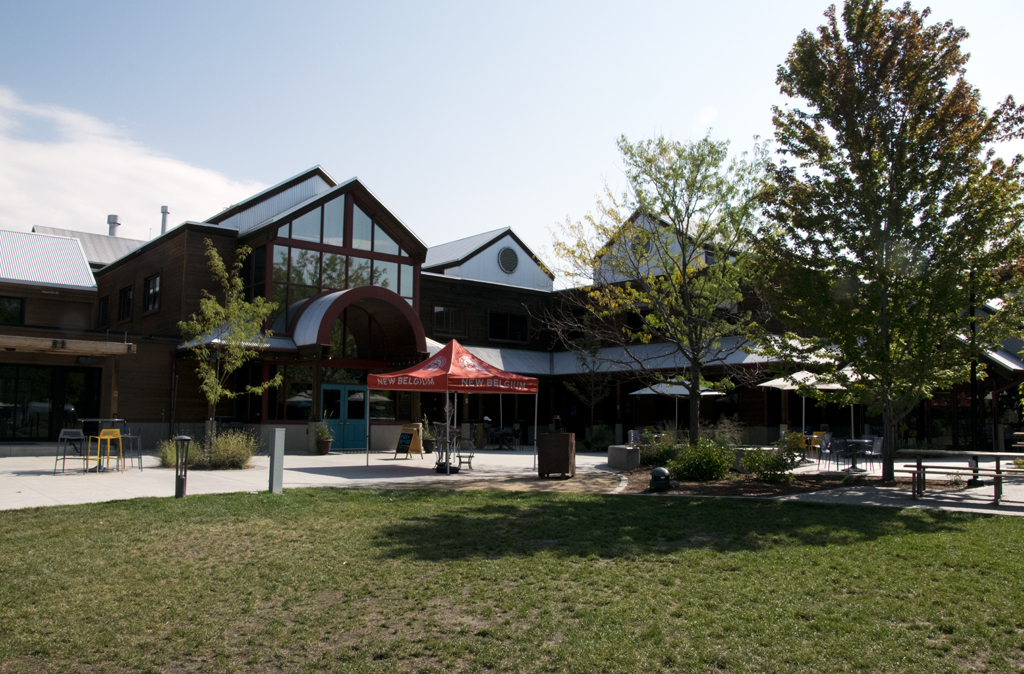 There were games and tables, even fire pits for cold weather. We’ve been back when it was very cold outside, and the fire pits were very useful! 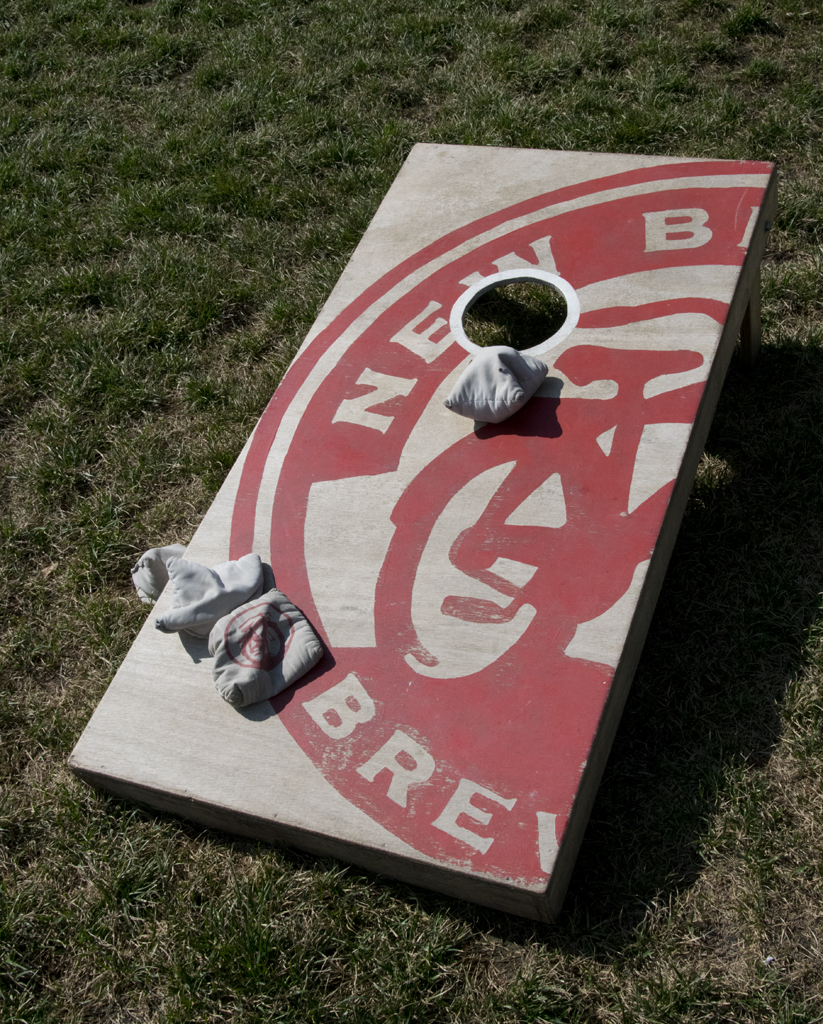 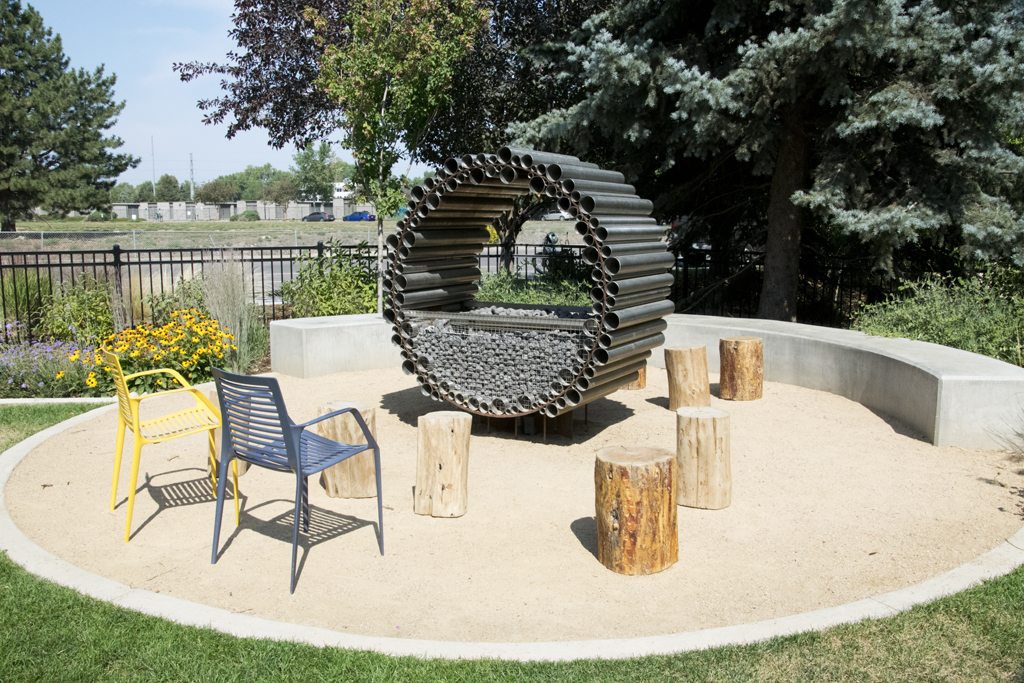 That first Sunday, though, the very friendly staff welcomed us onto the tour without any hesitation. The free tour lasts about 90 minutes and, during that time, a knowledgeable staff member walks you through and around the complex. Best part: you get four free beers, although one of them is sort of undrinkable. More on that later.

Anyway, inside the taproom are two very large rooms and the bar, of course. 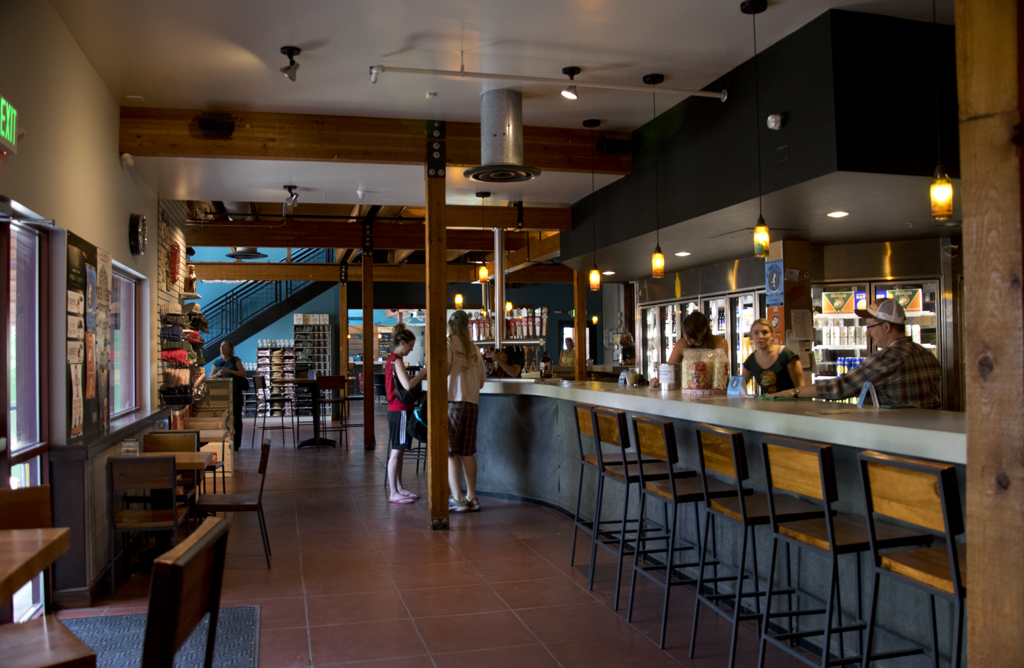 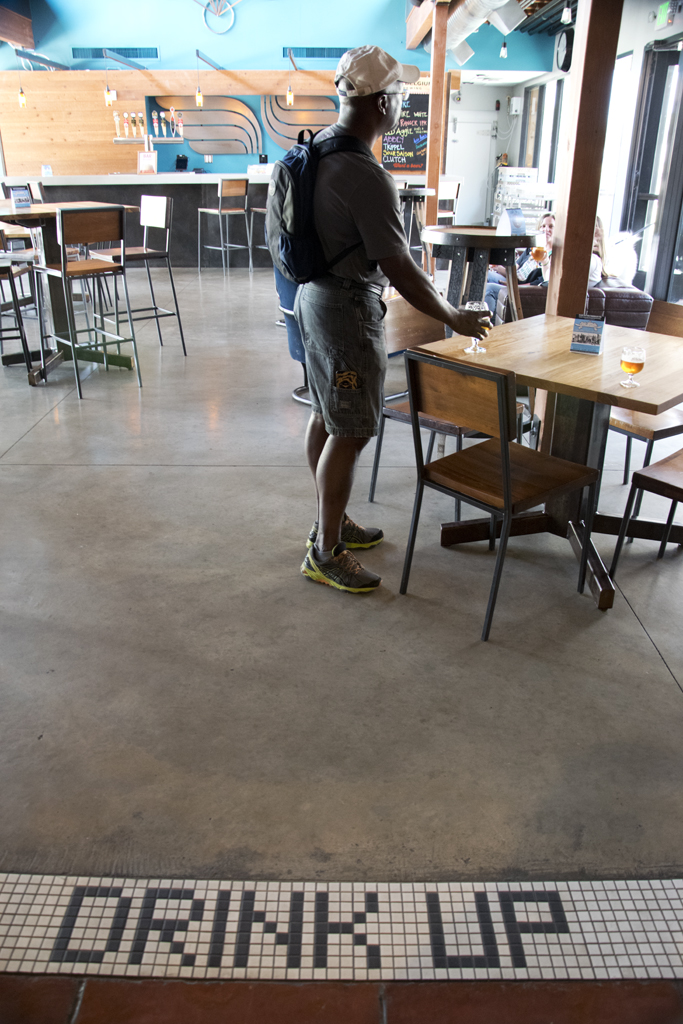 The company is employee-owned and, therefore, you are not allowed to tip!

First up on the tour, a trip up the stairs to some of the brewing vats and the first of the free beers (there are elevators for those who can’t navigate the stairs, btw). Here you can see the upstairs bar and jars with samples of malt and hops used during the tour: 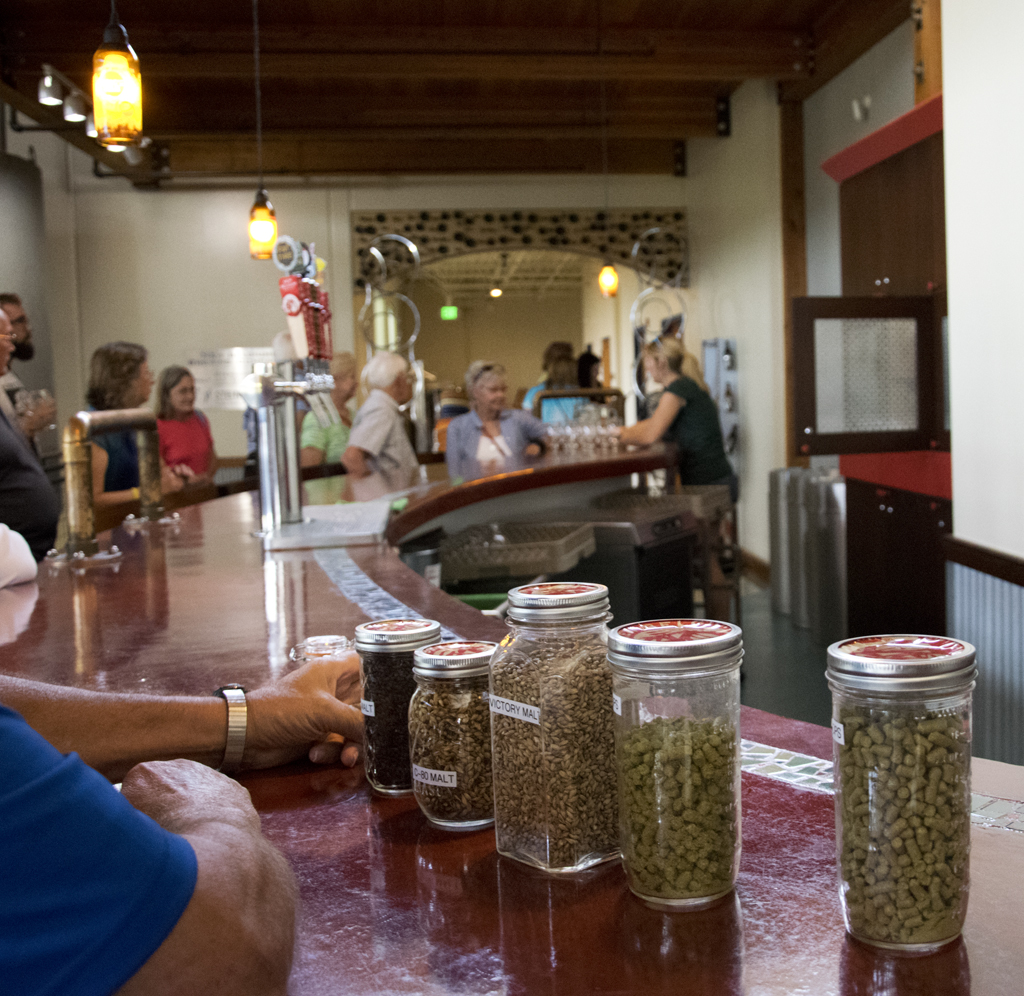 I snapped this shot of one of the labs through a locked door on our way down a hallway: 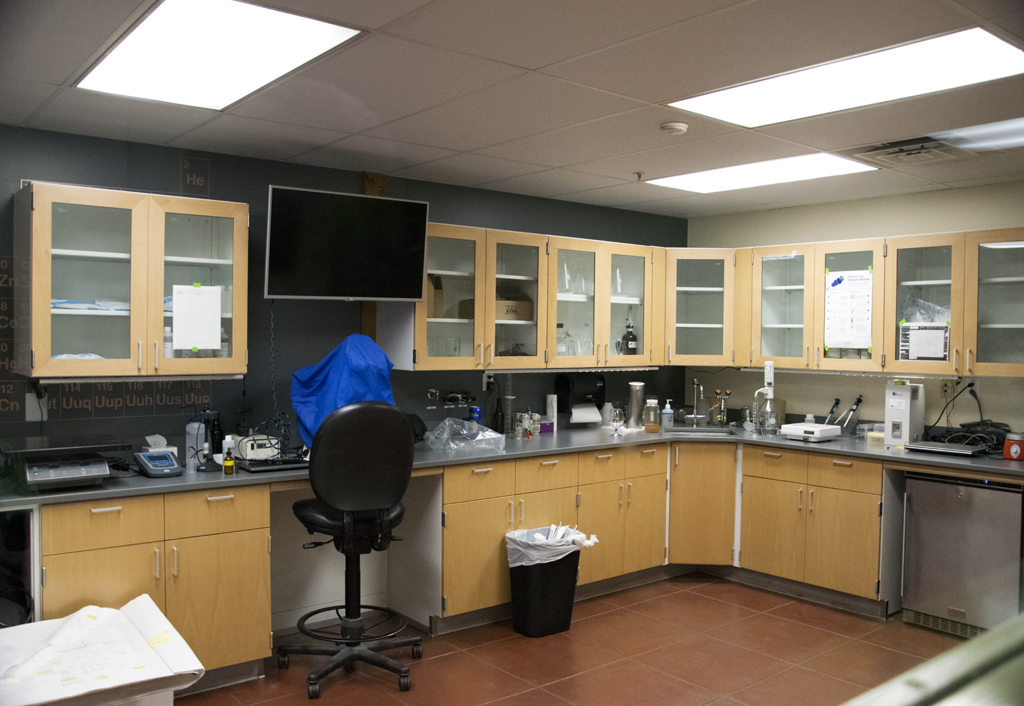 One warehouse area is devoted to brewing sour beer, which is aged in wooden barrels. The sour taste actually comes from the wood of the barrels: 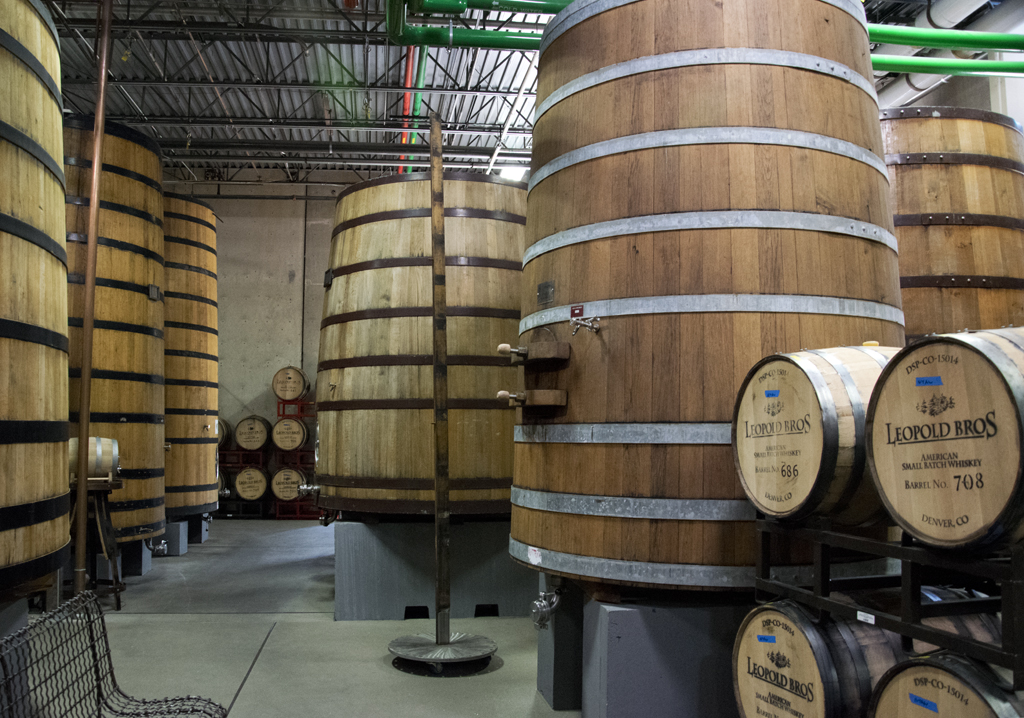 Sour beer was one of the four free beers on the tour. Can’t say I fell in love with it, but it was interesting. I’d never heard of it before, despite the tour guide saying it was a big health thing in Europe. Maybe in Belgium. Most of the tour participants left their sour beer behind as we made our way to the next area.

Here are more shots of the tour:

The artwork inside the buildings was very interesting, too. Here are some examples:

Also, there was a room which seemed to me like a rental hall or conference room in which there was a big art exhibit on display. All the artwork was made from skateboards: 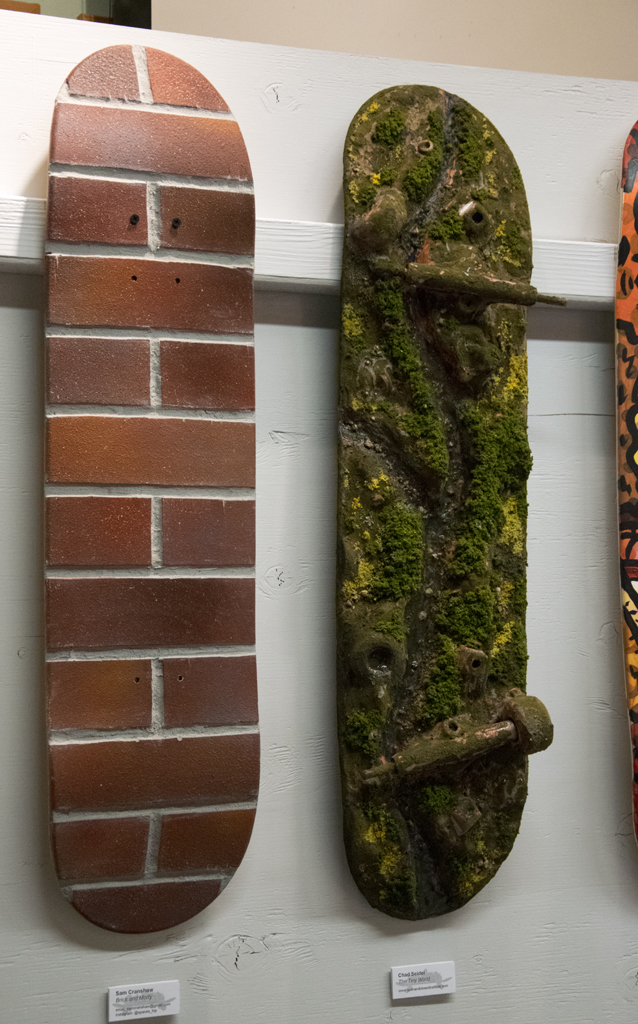 New Belgium was founded by Jeff Lebesch, an American who studied beer brewing in Belgium then began making beer in his basement. It became so popular that he and his wife went commercial. New Belgium now ships their beer nationwide and they’ve recently opened a second brewery in Ashville, NC.

The founders are bicycle enthusiasts, which is where the name Fat Tire came from. In fact, each employee-owner receives their very own fat tire bike on their one-year workiversary. There was a rack of them behind the brewery, the telltale sign that the employee-owners actually ride them to work. You could see that each year has its own special model. Here are a few of them: 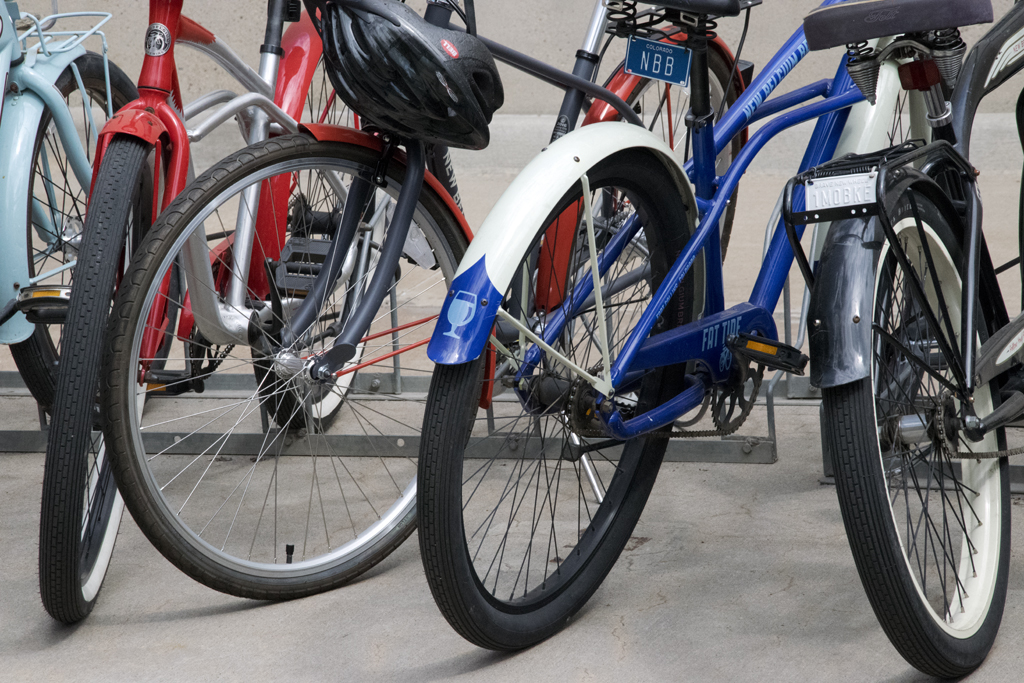 Out back was a small garden of hops, much like the German hops fields I posted for you a couple of years ago: 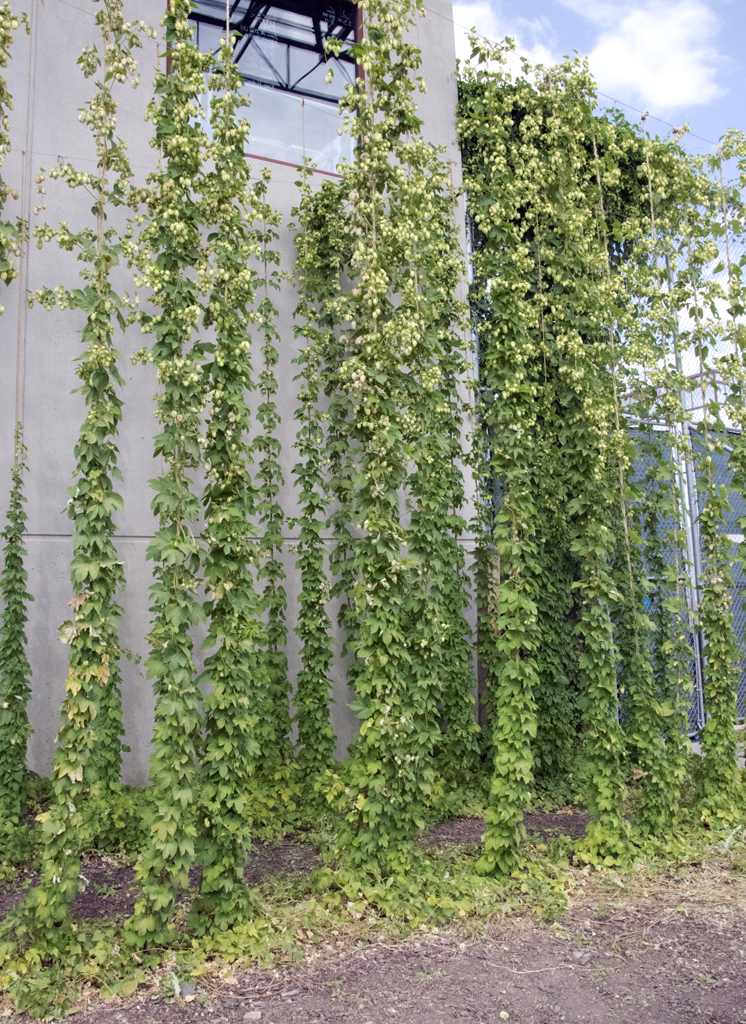 A very interesting item outside, too, was a demo of solar power, which the brewery uses as much as it can. They are very green and contribute to environmental causes. This solar artwork was made of circular metal disks that rotated using solar energy. The guide stood one of the tour members in front of the piece, thus blocking the light, and it stopped rotating. 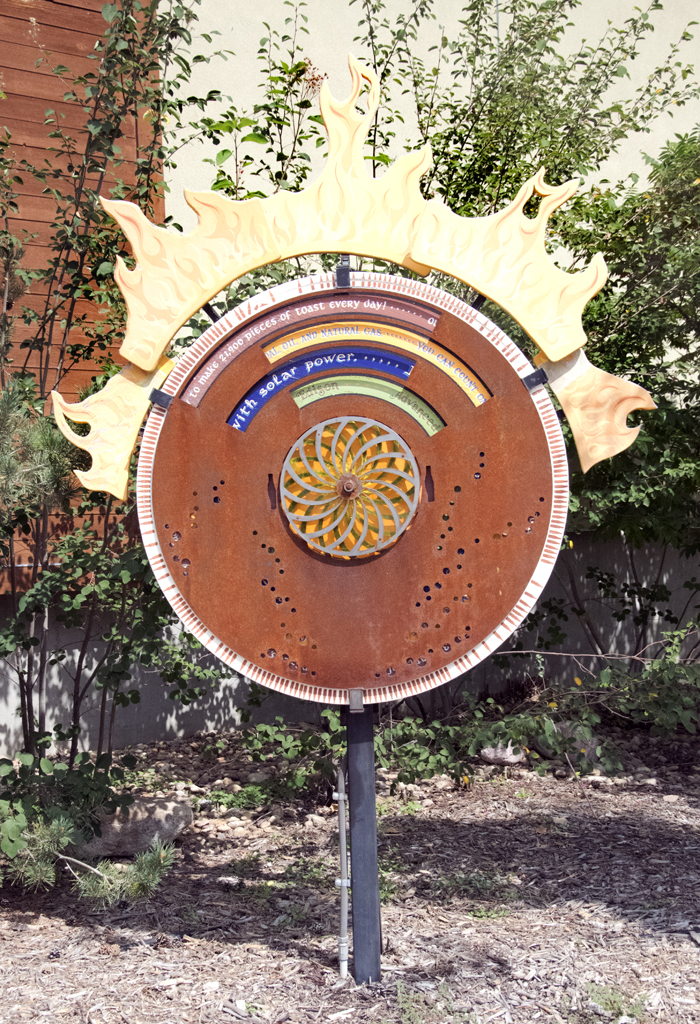 We toured lots more of the complex than I can post here. They even have a new, on-site health center with full-time healthcare professionals on duty.

Back inside, the guide explained that it was a tradition to slide down their spiral slide at the end of the tour. I think the guide said it was a European thing, but I’d never heard of it. I did find some pictures online of brewery slides in Los Angeles and Plano, TX, plus one in New Belgium’s new place in Ashville. The mention of some slides in Germany were at grain mills, which makes sense that they could slide bags of grain down it better than schlepping them downstairs. In any case, I slid. After four beers, what else would I do? 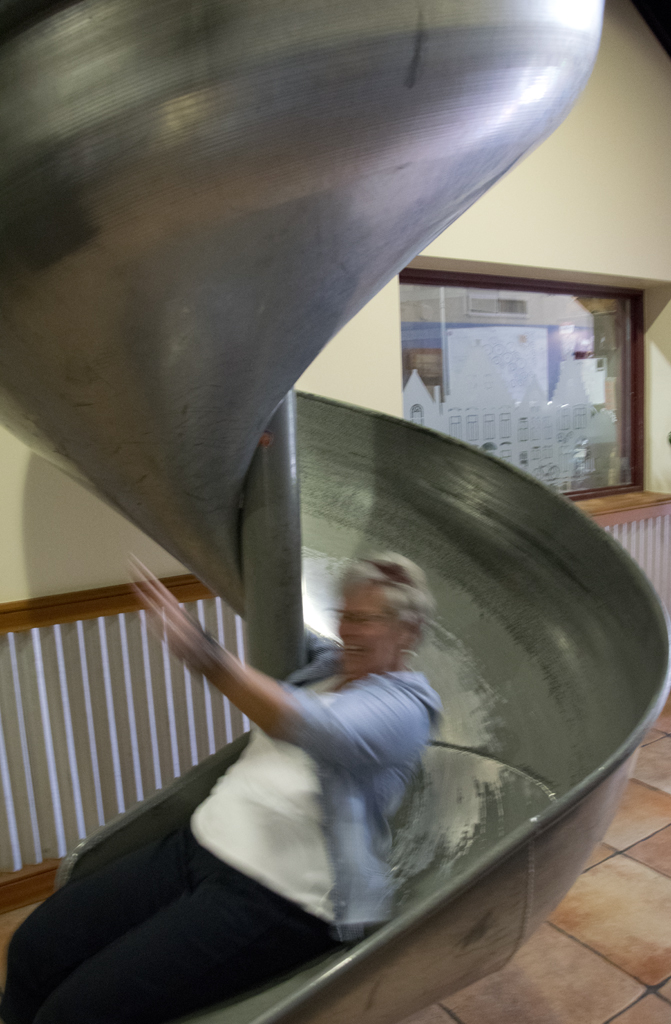 Make no mistake, that is NOT me in the photo above!

After our tour, we bought a couple more beers and snacked on some delicious food from one of the food trucks on site that day: Corn Doggies. Especially good were the beet fries, for which I got the recipe from the nice lady. Also, the corn dogs are house-made and organic! 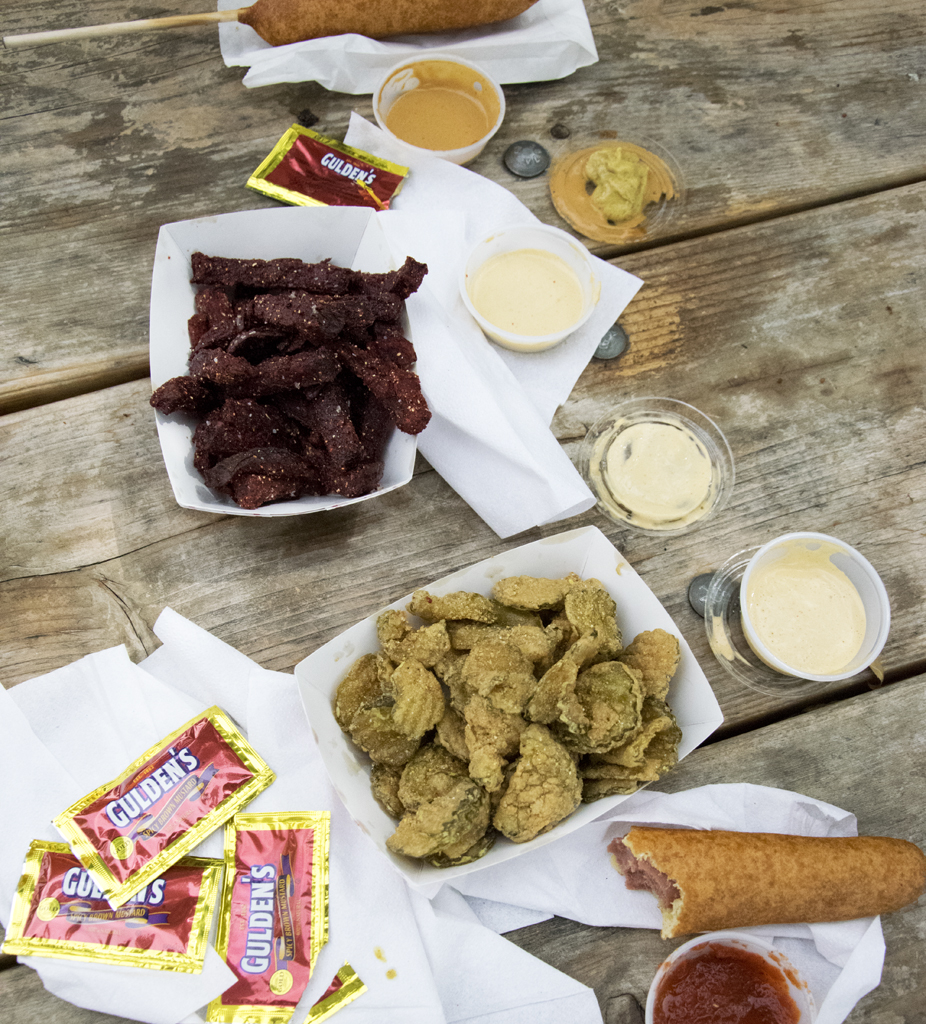 Another big feature of New Belgium is that they are very dog-friendly, as is common in Colorado. I met several people there with their dogs. And people seem to make pilgrimages to the place. Not only is the beer excellent, but the atmosphere is great, too. Reminds me of a German Biergarten in that regard. They even have a gift shop with branded t-shirts, mugs, hoodies and growlers.

So, if you can’t tell, you have my highest recommendation about this place! Maybe we should move closer to it. I’ll keep you posted. 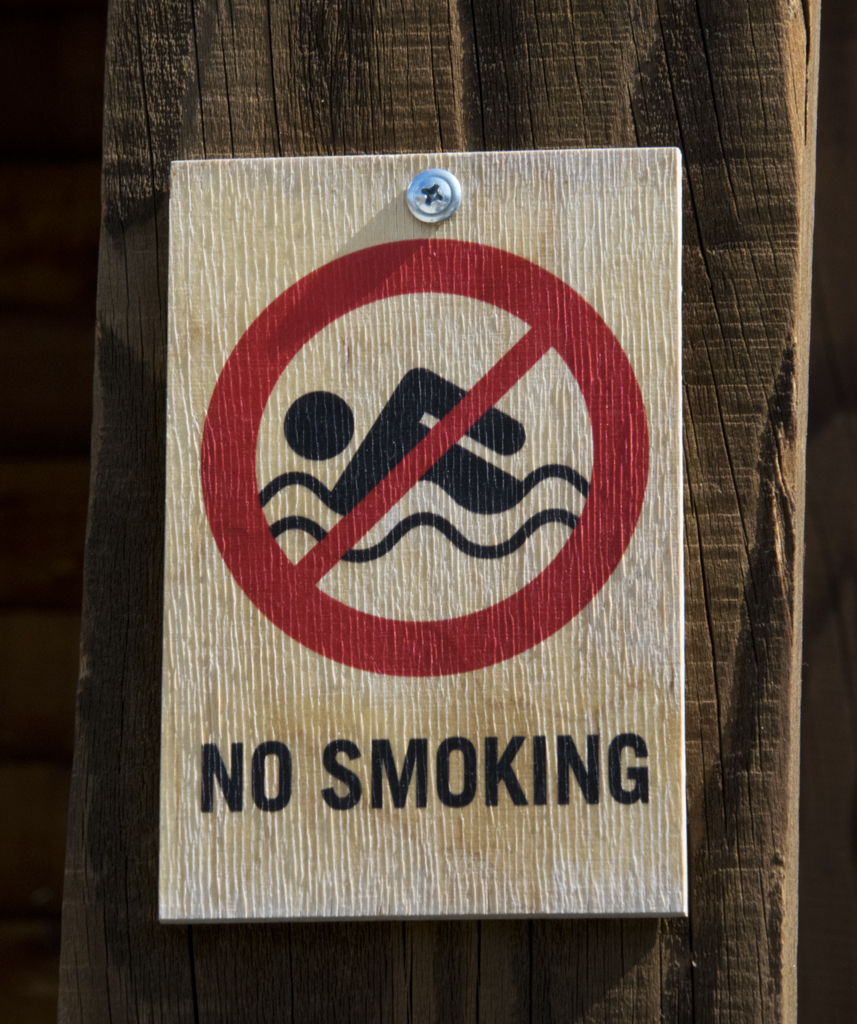