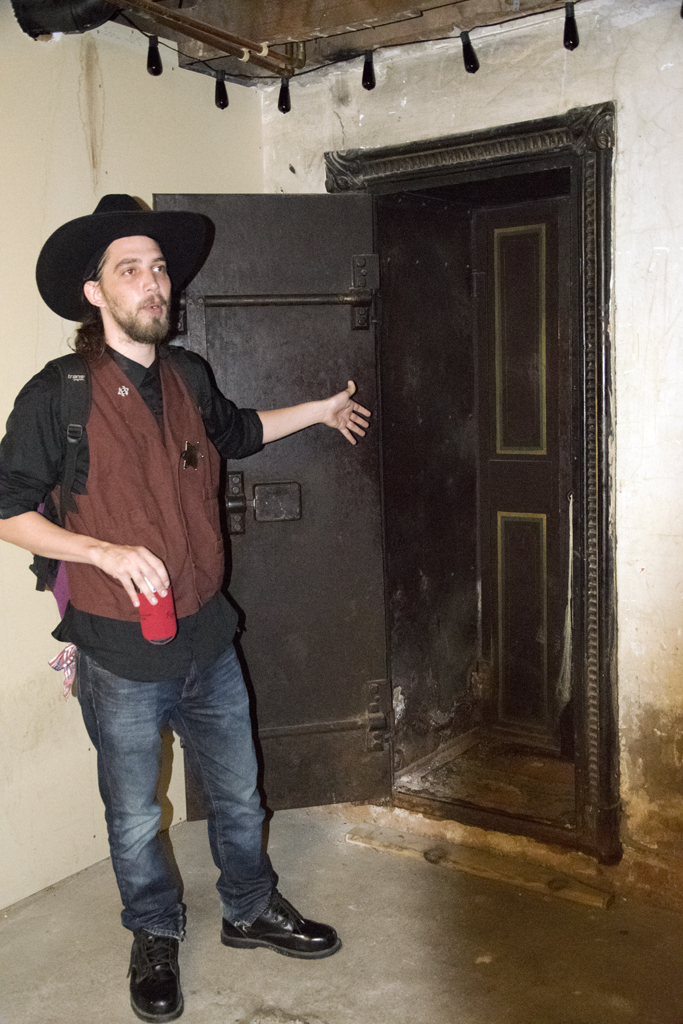 In a week or so my latest book will be available on Amazon! It’s the next in the series of Photos for No Apparent Reason (PFNAR) you see at the end of each blog post. This edition includes all the pix from 2017. I’ve designed the PFNAR books as a series, so they are all the same size and can be displayed together. I already have the 2015 edition available, with plans for many more. Help a sister out and buy a few!

This week I bring you the Denver Nightly Spirits tour, a haunted tour of the city, if you will. Our former neighbor and excellent friend from Florida visited us last June and wanted to do this. So we found a Park N Ride and took the commuter train downtown at the appointed hour.

Our tour started at a pub called Blake Street Vault, which is on Blake Street (duh) and housed in an Old-West building dating from 1863. It had been renovated in 2007 when the pub opened. 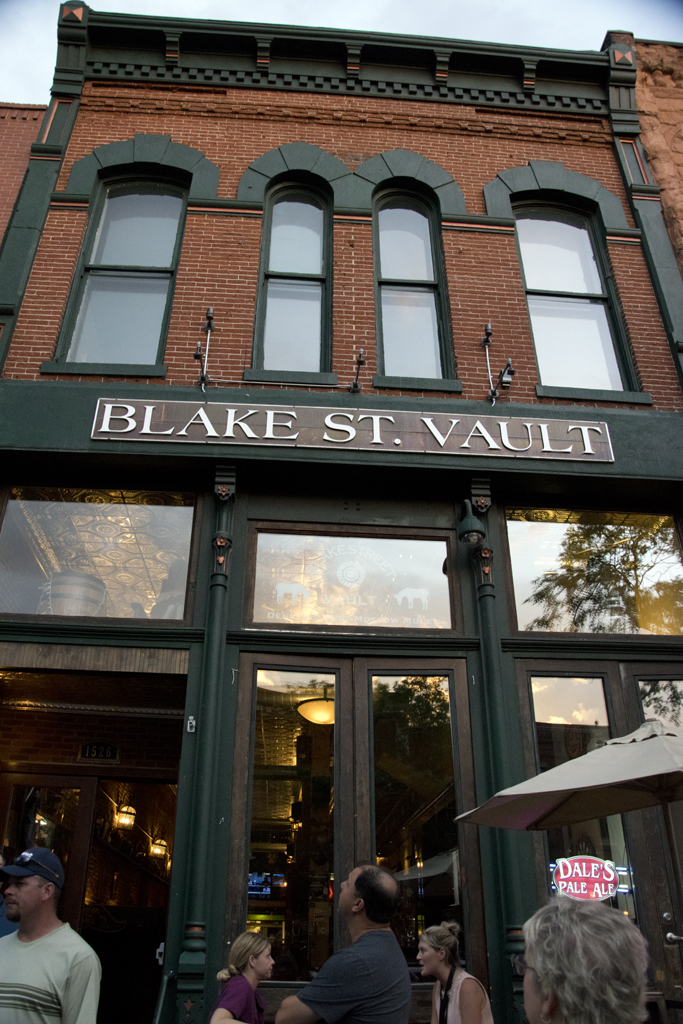 It is the former location of many saloons, boarding houses and, according to our tour guide that evening, a bordello. Loved the old tin ceilings: 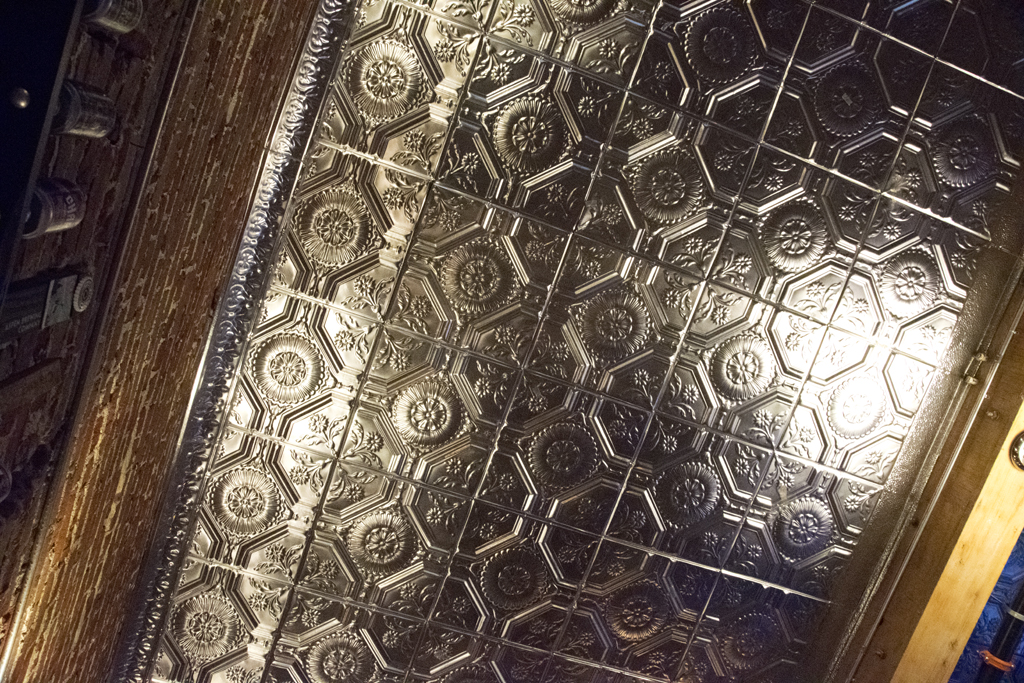 I just read online that the pub closed as of the end of 2017, and the building sold for a cool $2.4M. I don’t think there has been an announcement of who might move into the space yet. In any case, I’m glad we saw it last summer.

As our guide explained, the place is named for the vault, which is below the main floor. It is supposedly haunted in several places down there, including the vault. Here’s our guide, in period costumery, telling us about it:

He told us it was locked for many years and there were rumors of piles of gold, etc. However, when they finally opened it, all they found was a stash of ginger beer from the old days:

In the same underground area was another “haunted” spot, which had a legend to go with it about some military captain or whatnot (I forget): 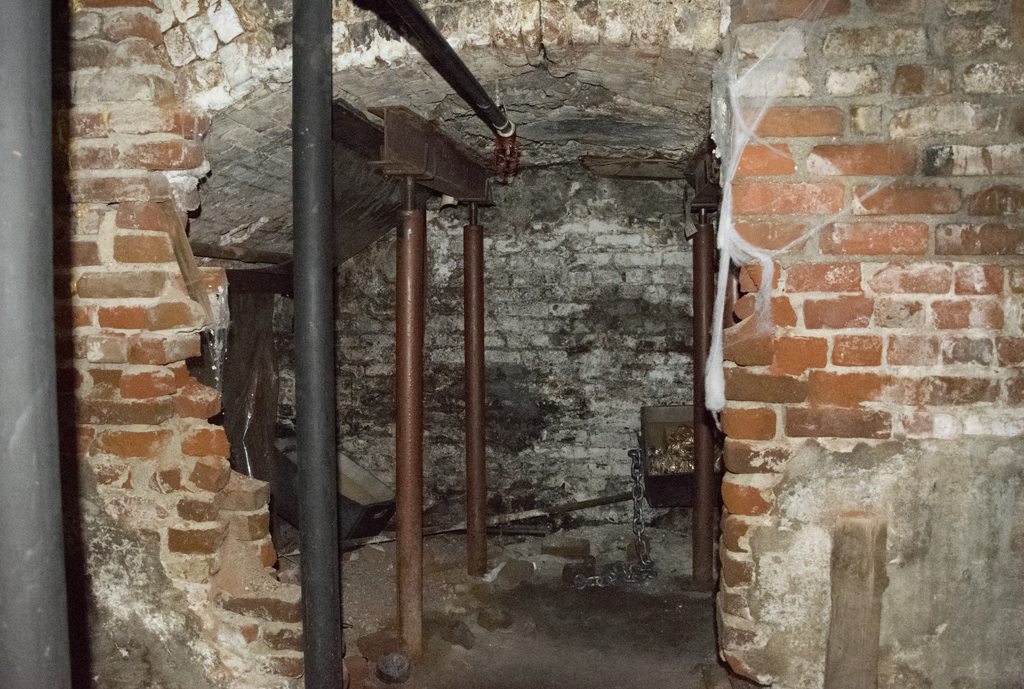 And the place where the staircase was that the prostitutes used to use to keep the Denver businessmen happy in secret: 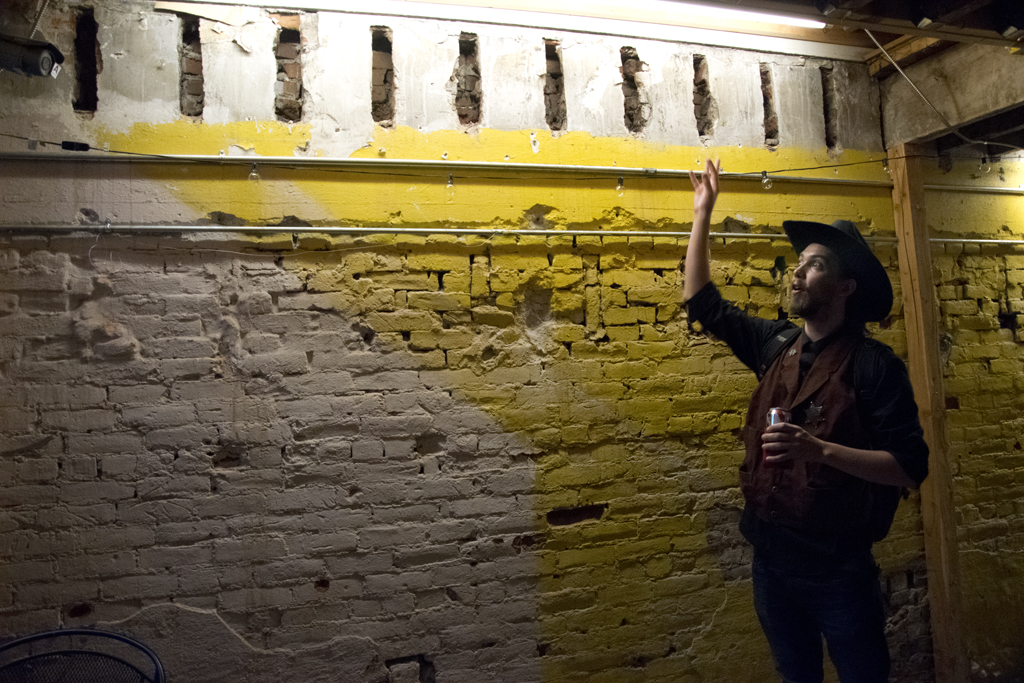 I found the floor joists interesting: 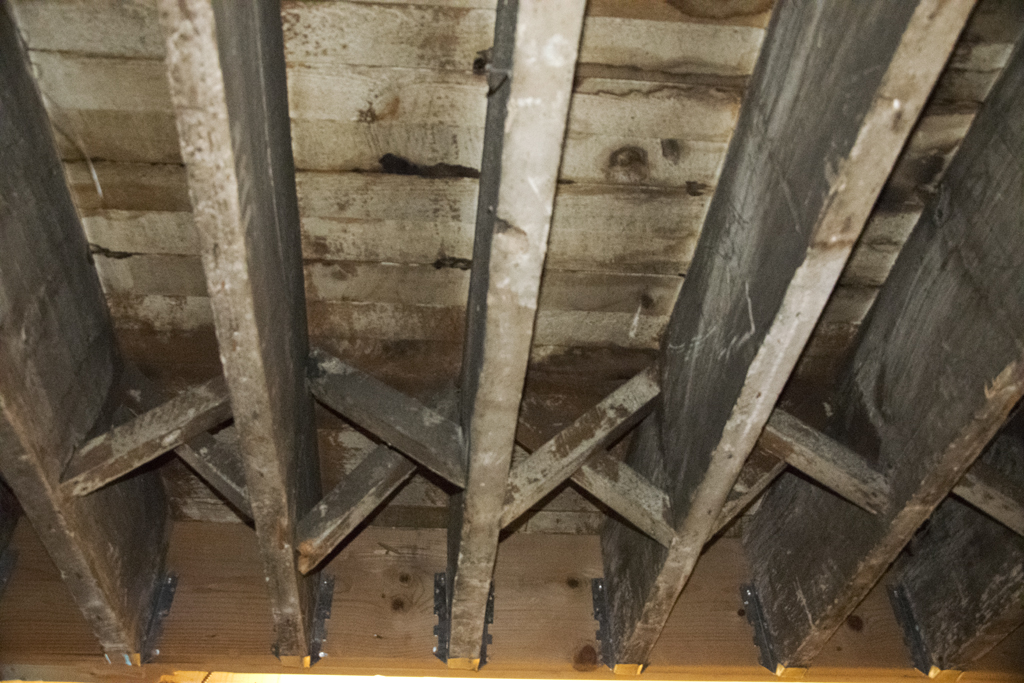 After the Vault, we traipsed through the downtown area for a few blocks, noting the underground passages that were or still are: 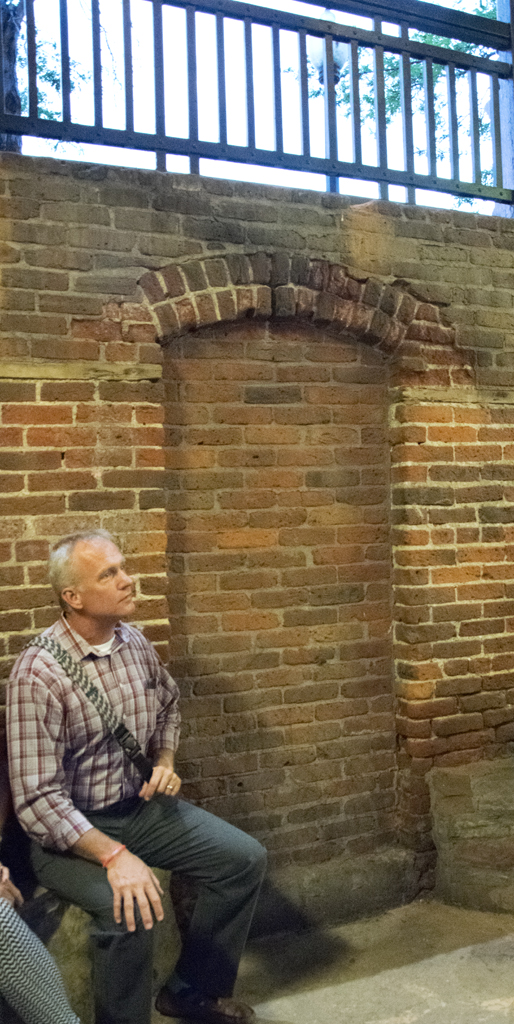 Our guide told us many ghost stories, and we stopped for drinks in three or four bars. It wasn’t that riveting, except when we came to Double Daughter’s Salotto! 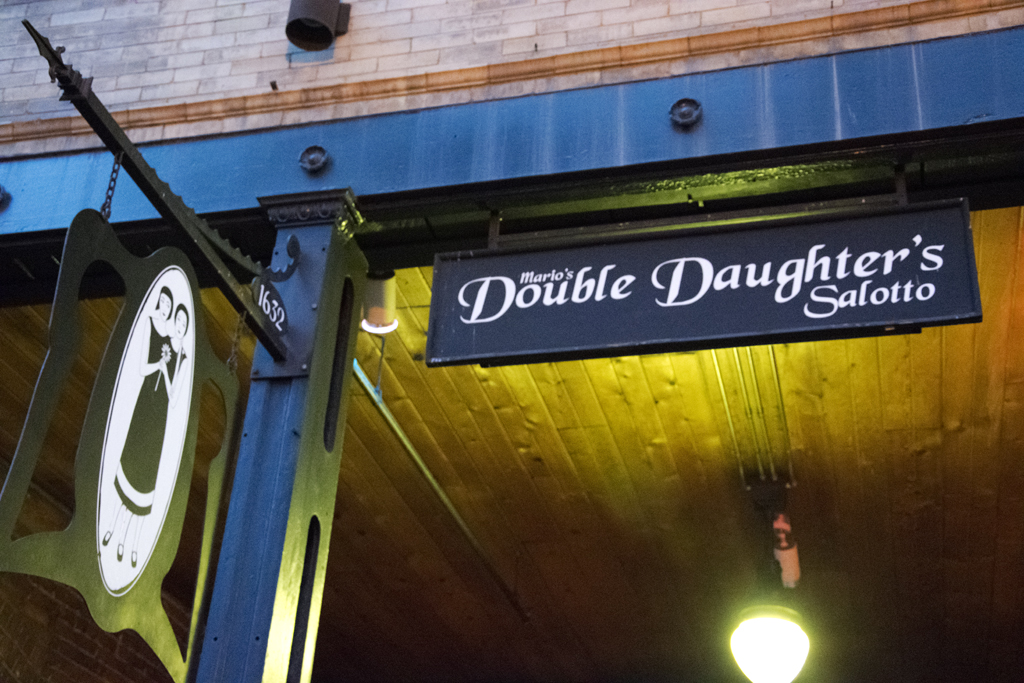 It is so-named because it was owned by a circus-performer whose daughters were conjoined twins. The interior of the place reminded me of the Beetlejuice movie scene where the furniture comes alive and dances to the Day-O song! Note the ax-handle railing on the upper deck, the Tilt-A-Whirl-type booths and general funkiness of the surroundings. 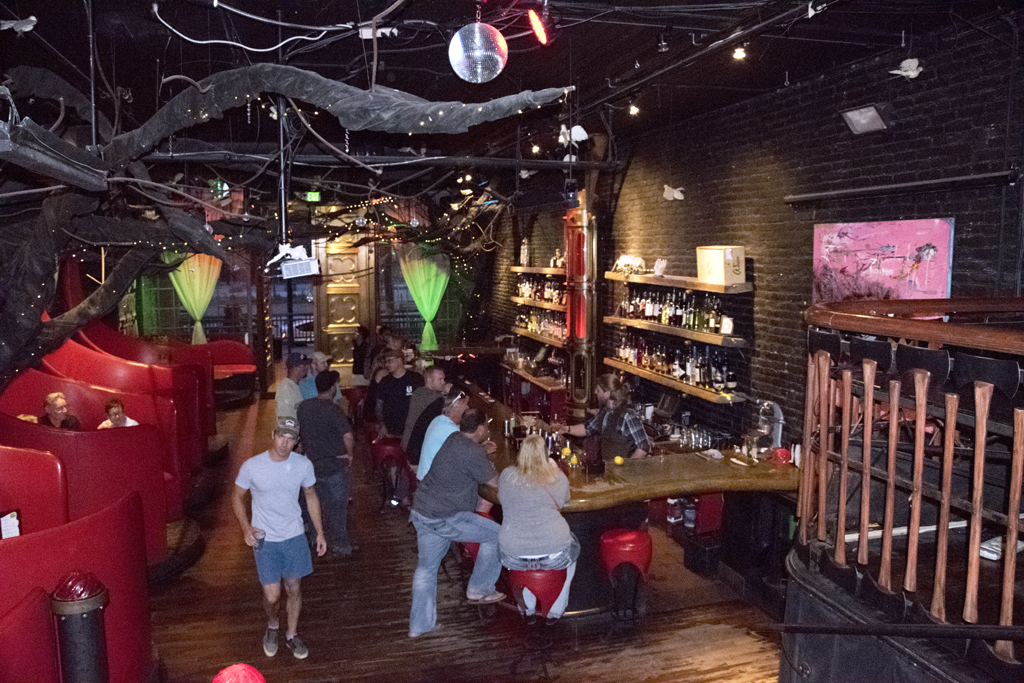 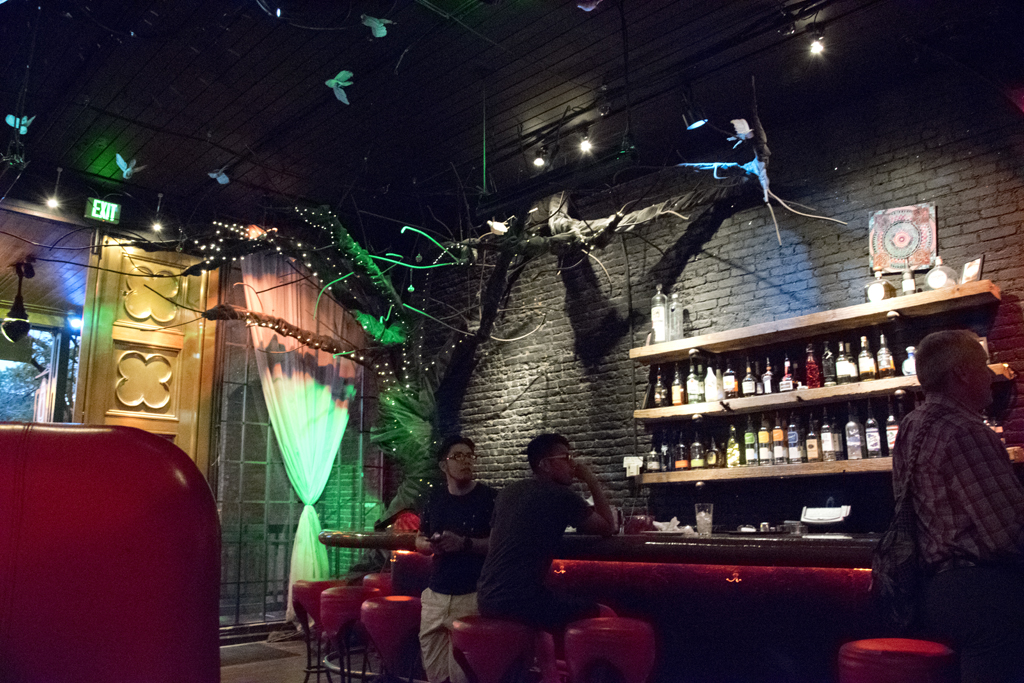 The pictures don’t do it justice, though. It was much darker with blacklights and other touches. The ladies’ room was supposedly haunted, but I didn’t see anything unusual, except for the funky decor in there, too. But I loved this place! Whoever decorated was going for a weird circus atmosphere, very Tim Burton, and they nailed it. When you come to visit, we’re going there!

The tour ended at the Union Station, Denver’s beautiful central transportation hub, which I’ve written about before. Our guide pointed out a couple of places where some ghosts appear from time to time. Again, I didn’t see anything out of the ordinary, and haven’t since (I check every time I’m there), but he claims he’s seen both spirits. After tipping our very enthusiastic guide, we wearily boarded the train to our Park N Ride and made our way home, exhausted.

I thought the tour was fun, but it ran WAY over the two-and-a-half-hour estimate given on their website. It was more like four hours or more. That would be my only criticism because we were fried by the end of it, especially because of the record-high heat of that day and evening. Underground Denver was interesting and seeing some of the local watering holes was good for us newbies. Tickets cost $25 per person and you can book online.

Check back next week for another of the places on this tour: the Oxford Hotel and Cruise Bar. 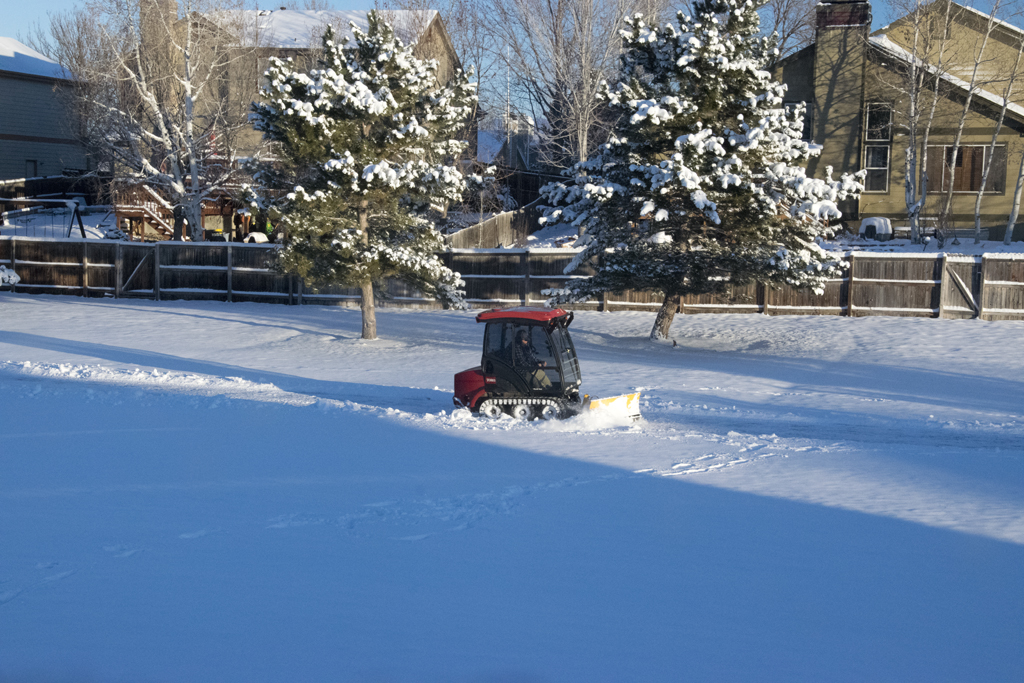