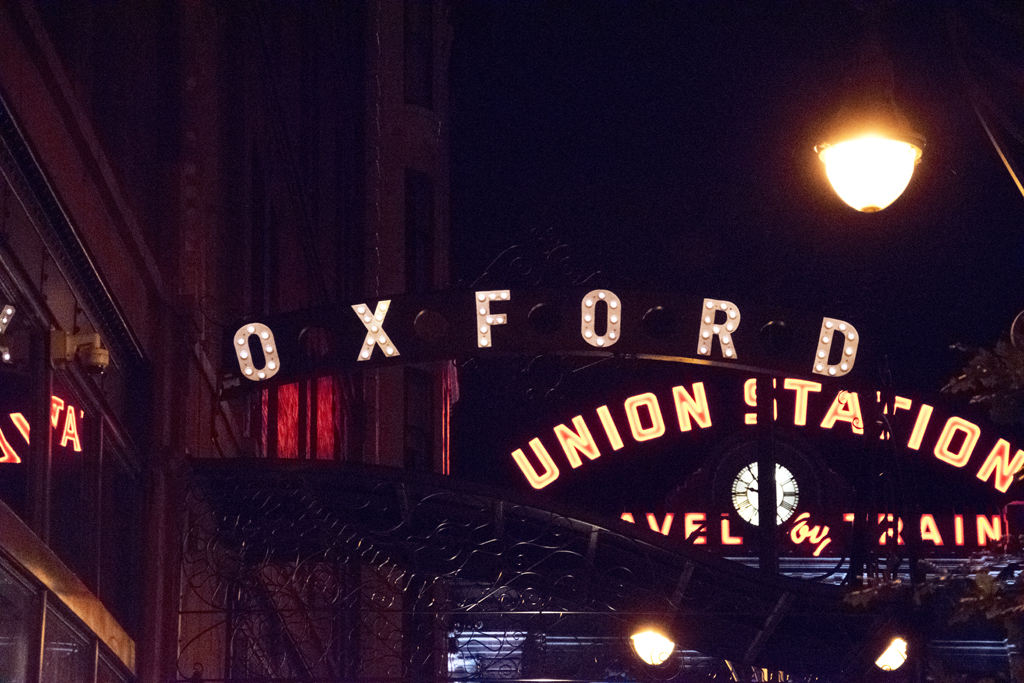 Introducing my latest book! It’s the second in my series of collected Photos for No Apparent Reason (PFNARs), Photos for No Apparent Reason 2017! Along with PFNAR 2015, this is the next step in my goal of compiling all the PFNARs into books by year. The books are all the same size and general appearance, so they make a great set. Both are available on Amazon in print and Kindle versions. They are wonderful coffee-table books/conversation pieces and would make great gifts for photographers and anyone with a sense of humor. The print versions are best for seeing the photos, but you can also buy Kindle versions of each one, too. If you’d like to know the backstory on all those funky pics at the end of each blog post, here’s your chance! Buy this one and all my other books today on Amazon.com

This week I bring you some pictures and info about the Oxford Hotel in Denver, just down the block from Union Station. It’s walking distance from Coors Field, Larimer Square and the 16th Street Pedestrian Mall, too (a really, really good location!).

I encountered the hotel on the haunted Denver tour I told you about last week. Since it was nearly midnight when we arrived at the Oxford on our tour, the pictures are a little dark and grainy, but they look all the more spooky for it.

There is a wonderful art-deco bar inside the hotel called the Cruise Room Martini Bar. It was renovated in 2012, and it reminded me of Prague. It was a speakeasy during Prohibition. It was lit with a reddish light and the booths reminded me of church pews: 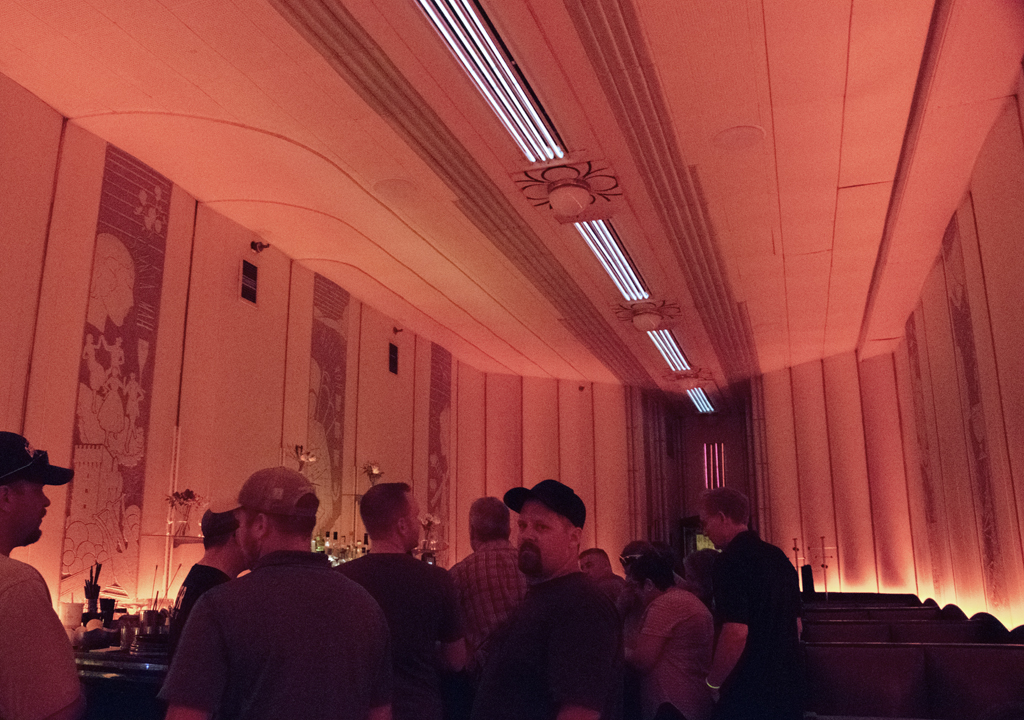 There’s a ghost story about a man who comes into the Cruise Room on occasion wearing an old postal worker uniform. He always orders a beer, drinks it down and mutters something about “must get the gifts to the children”. After he leaves, the beer bottle is always full. Supposedly there was a postal worker in the 1930s who did the exact same thing upon a Christmas Eve, but the children never got the presents. In the spring, his body was found, along with the gifts, after the thaw.

On the outside of the hotel was a large picture window which looks like a library; that’s supposedly a holdover from Prohibition days in which the Cruise Room speakeasy was disguised to passersby. The formally-attired guy in front of the window was the night bellman, whose name I’ve forgotten. But he left an impression; had he been taller we could have called him Lurch. He was always hovering silently in the background with a somewhat knowing look on his face – what did he know??? 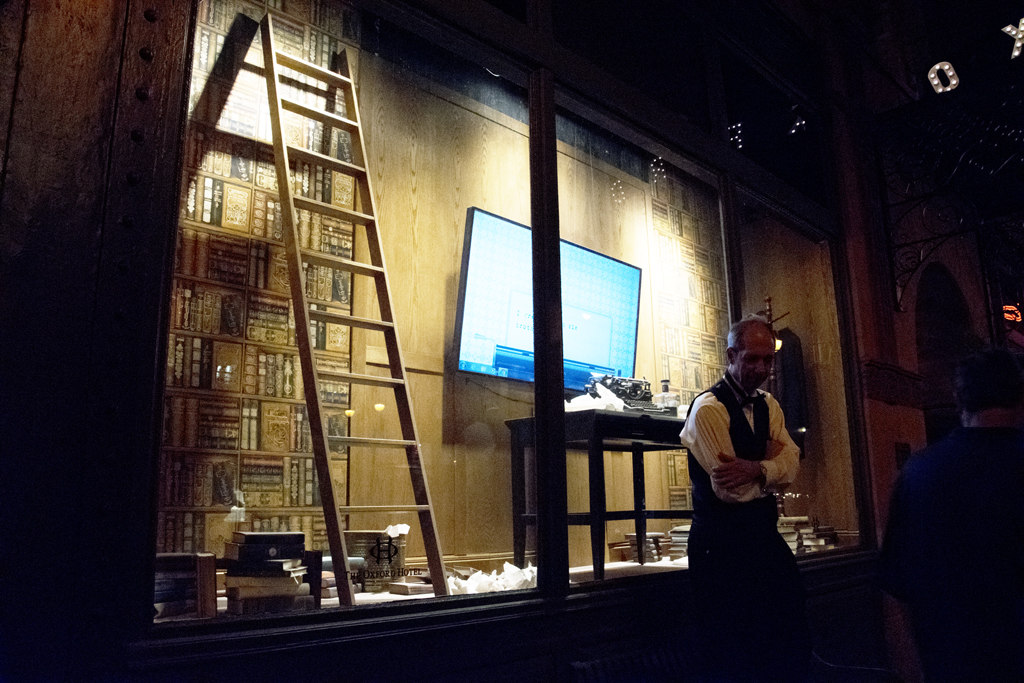 The upscale hotel dates from 1891 and is on the National Register of Historic Places. In the 1950s, apparently, it had become a flophouse. However, it was renovated in the 1980s to its former grandeur. Today it’s a 4-star hotel with 4.5 stars on both Yelp and TripAdvisor. It’s been fully redone and the rooms have antiques, but they are not worn or rundown, according to reviews. Just don’t stay in Room 320 – that’s where a nasty female ghost likes to terrorize single male guests.

We didn’t see any of the rooms, but the lobby is really impressive: 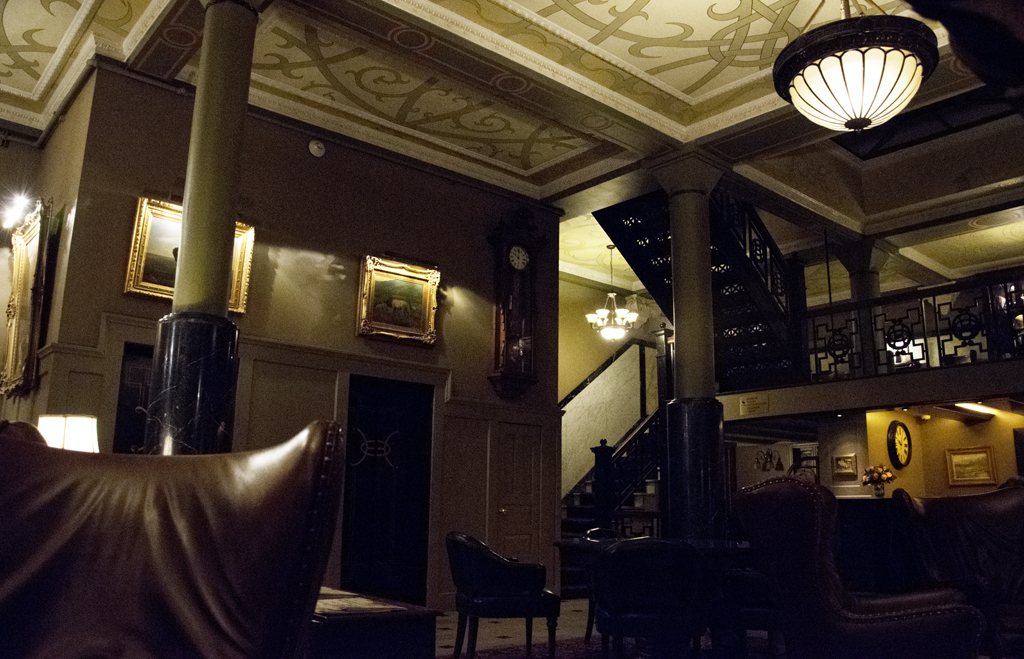 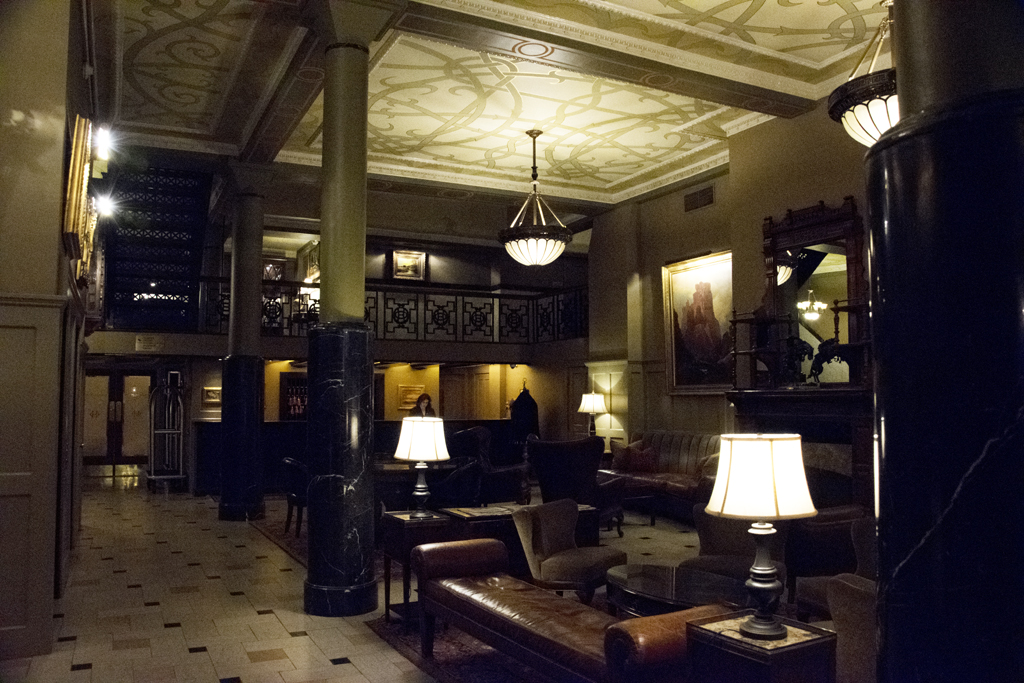 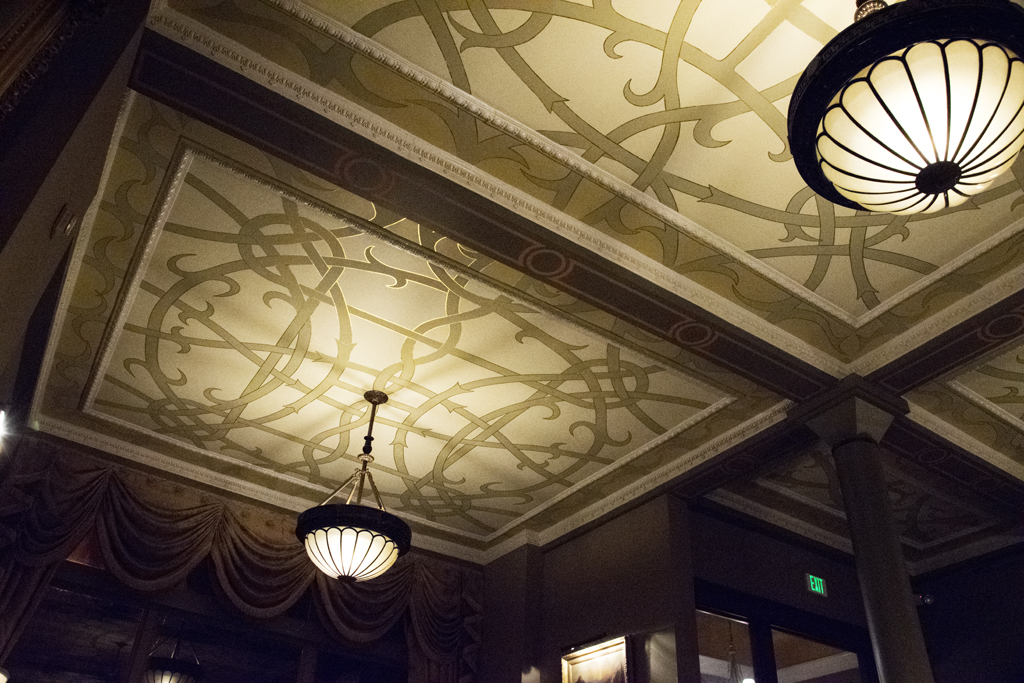 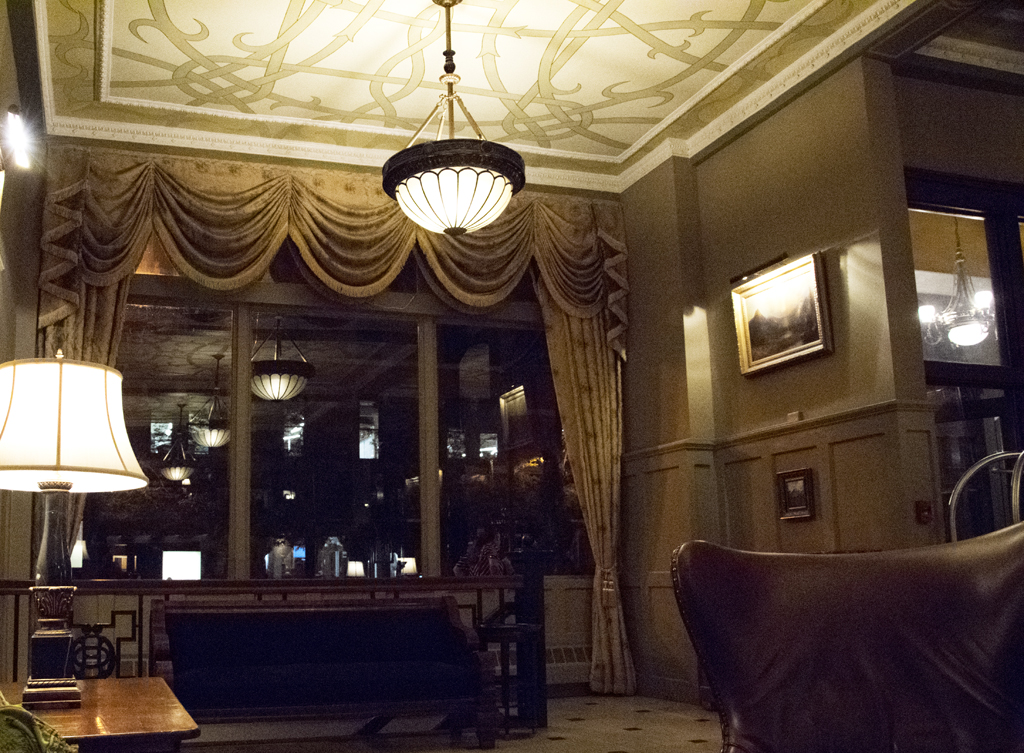 I really want to stay at the Oxford someday, just not in Room 320! I’ve read there are claw-foot tubs and other antique furnishings in the rooms, plus the service always gets great praise. I will take more photos, of course, in the light of day, so you may see some in the future. 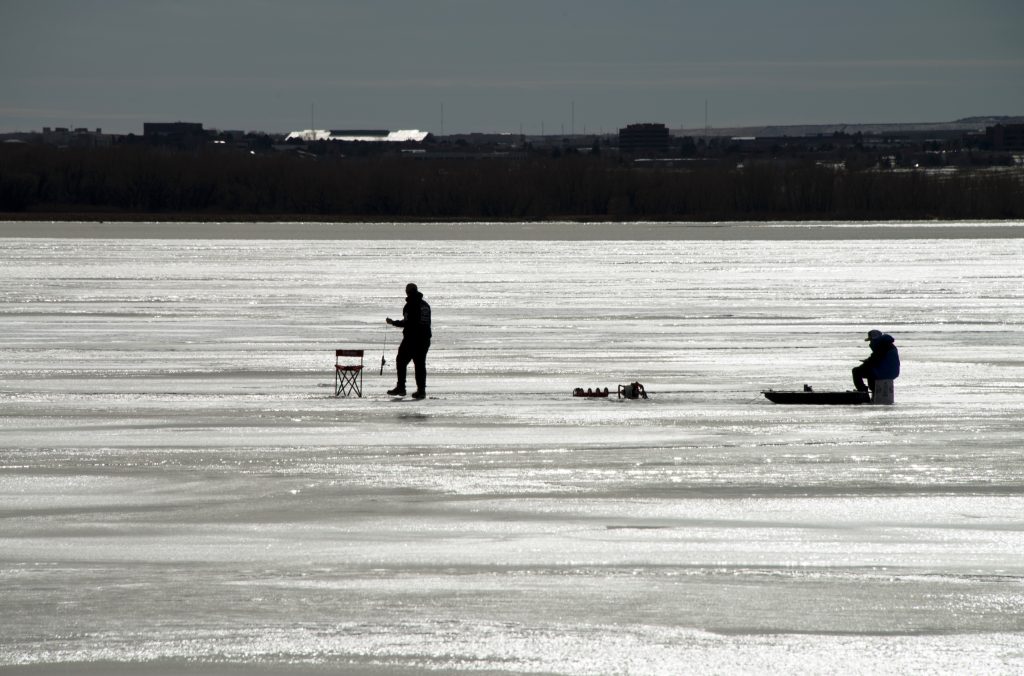