If you drive slowly down Front Street in the little town of Louisville, Colorado, you’ll see a friendly face across from the public library: 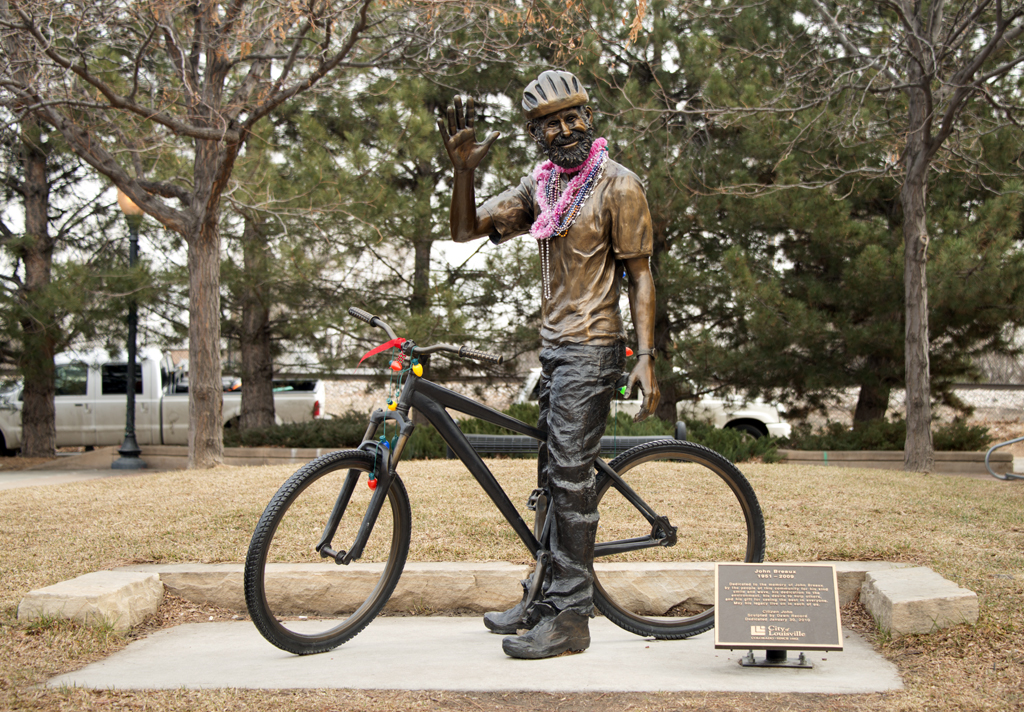 It’s a life-size bronze likeness of John Breaux, former resident of Louisville. I believe the last name is pronounced “bro”. Now, In Colorado, there is a lot of public art, even in small towns. That’s because there is a 1977 statute requiring all state-funded building or renovation projects to set aside one percent of the budget for public art as part of the finished project. Many towns and smaller communities have adopted this idea, too. So it was not a surprise to see something like this bronze statue situated there.

I found mention of this sculpture on one of my visits to RoadsideAmerica.com. I was sifting through the sites listed near me and came across an item called Bronze Bicycle Trash Collector. It was within driving distance and doable for the time I had that day, so I set off with my camera.

My original intent was to give you the basic information about the statue and say essentially the same thing that Roadside does, which is only a couple of paragraphs. However, in researching some of the facts, I found so much information that I expanded my original plan. Here’s some background:

John Breaux came to Louisville from California around 2000. Up til then, he’d been diagnosed with, and was taking medication for, paranoid schizophrenia. He was living with his parents in Cali until they died. Then he moved in with his brother here in Colorado and stopped taking his medication around the same time. It seems he grew happier after that.

From that time on, he became the “Angel of Louisville”, smiling and waving at everyone as he made his way around town and the neighboring town of Lafayette on his bicycle. He told people he thought California was dirty and he wanted to keep Colorado clean and beautiful. Therefore, he’d bike around the area and pick up trash from roadsides, parks and trails every day. He’d also volunteer at local businesses, which meant bagging groceries at supermarkets, clearing snow from parking lots, opening doors for people, bringing sodas to workers on break, etc. In any case, he was well known in the community, and well loved.

In fact, many people referred to him as Jesus or Bike Jesus, not only because of his physical appearance. Many believed he “knew things” and understood what should be most important in life, which is caring for each other. He always had a smile, a wave, and a helping hand for anyone he encountered.

I get the impression he looked ragged, dirty and torn. But that didn’t matter to people. In fact, the town gave him a bike helmet at one point, and in 2006 the mayor issued a proclamation honoring him for his exemplary help in keeping the area clean and beautiful.

Well, in 2009, John was walking along the side of the road, was struck by a car, and died. He was only 57. The community went into shock. I found dozens of articles online about John and his death. Some of them really choked me up. At the time of his death, there was an outpouring of grief. People piled flowers, gifts and posters at the accident site. They gathered in several places around town to hold vigils and mourn. It was quite something, so I’m given to understand.

Well, it seems his life wasn’t wasted. I found mention of an annual bike ride/cleanup day in Louisville, and Lafayette renamed one of their parks after him. The statue I photographed was commissioned by the town in his memory. Plus, the sculptor donated her time because of his giving nature. Just last year Louisville established an annual John Breaux Good Samaritan award. You can see in my photos that people even decorate his memorial. This man’s spirit definitely lives on. There is even a webcam at the statue! 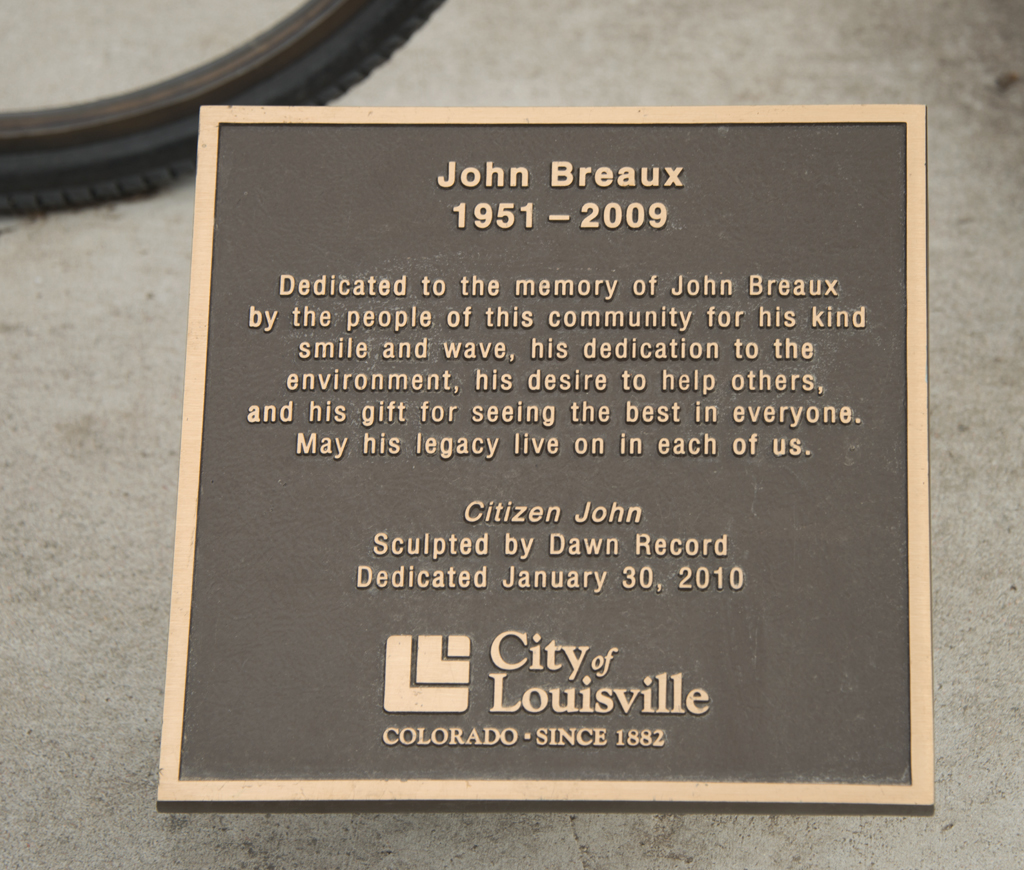 Regarding the statue, I read that the bicycle, his watch and other items were cast from John Breaux’s own belongings. 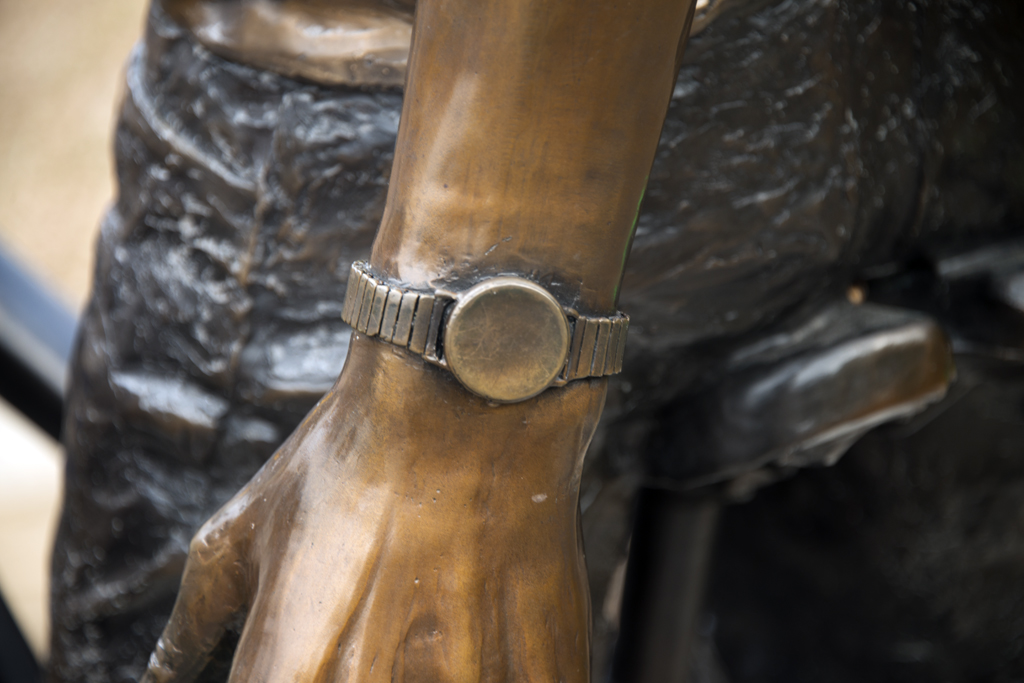 Well, even if I came to Colorado eight years after John Breaux lived here, I’m happy I got to know him through Louisville’s memories. So, all I can say now is, “Have a good day!” 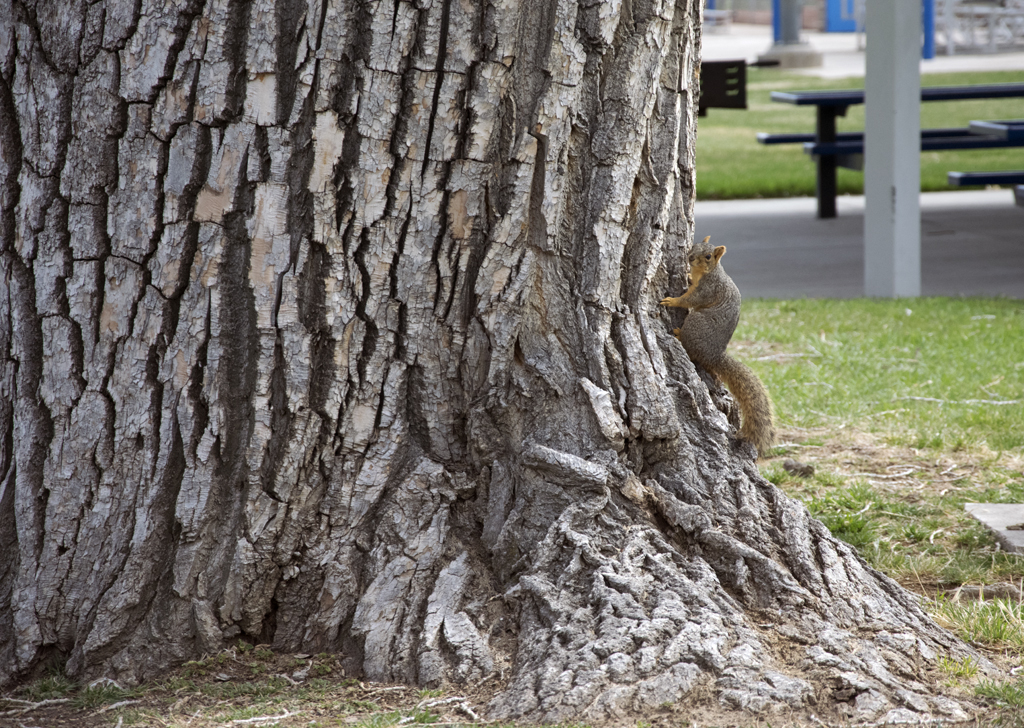