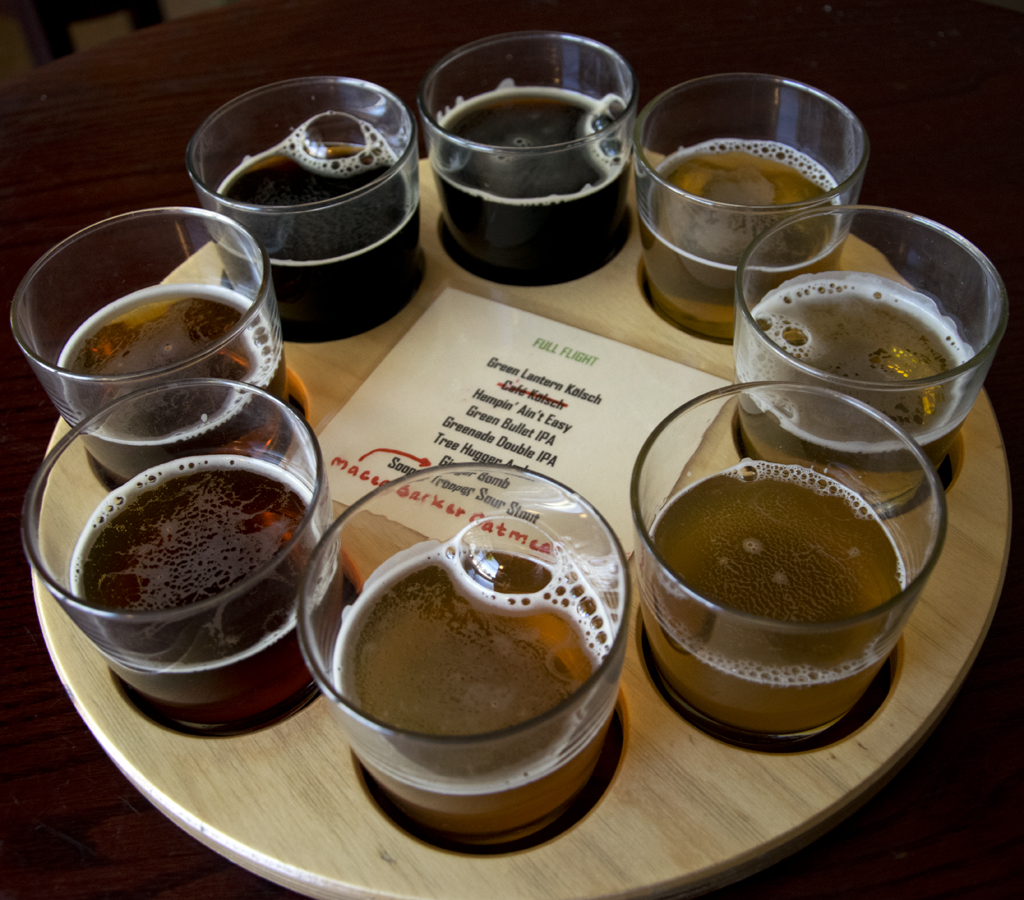 I was interested in Asher because they make organic beer there. So, my husband and I made the 20-minute ride to the place a week or so ago to try it out. It’s much smaller than Avery, and a much newer business. When we rolled up to the storefront of Asher in a strip-mall type building, we saw a few picnic tables outside in a chained-off area of the parking lot. 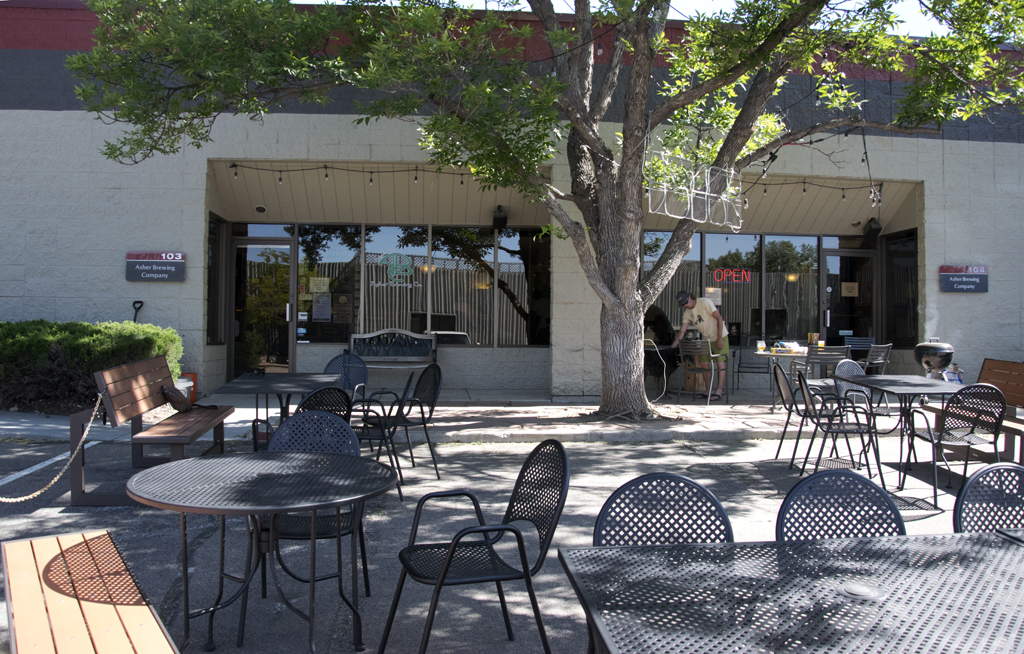 It smelled really good because someone was grilling burgers on a Weber. We stepped inside to a small taproom that was fairly crowded with young people. There was a very busy bartender who was wearing the coolest vintage, pearl-adorned hat. Her whole ensemble reminded me of a pinup girl from WWII era. 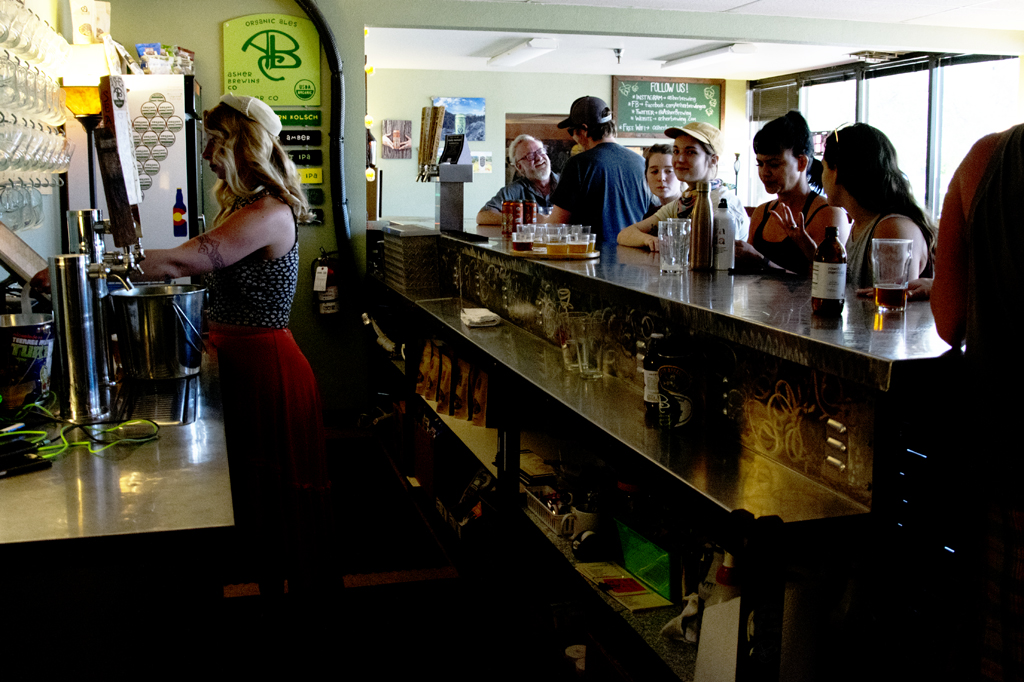 Just beyond the taproom was the barrel room, which doubled as a game room: 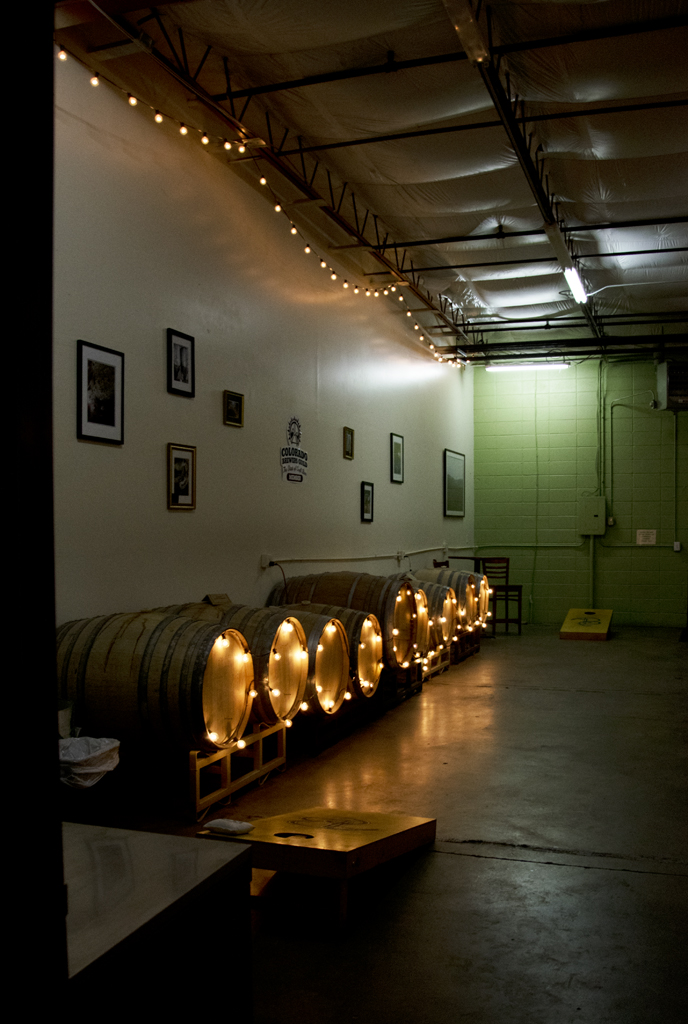 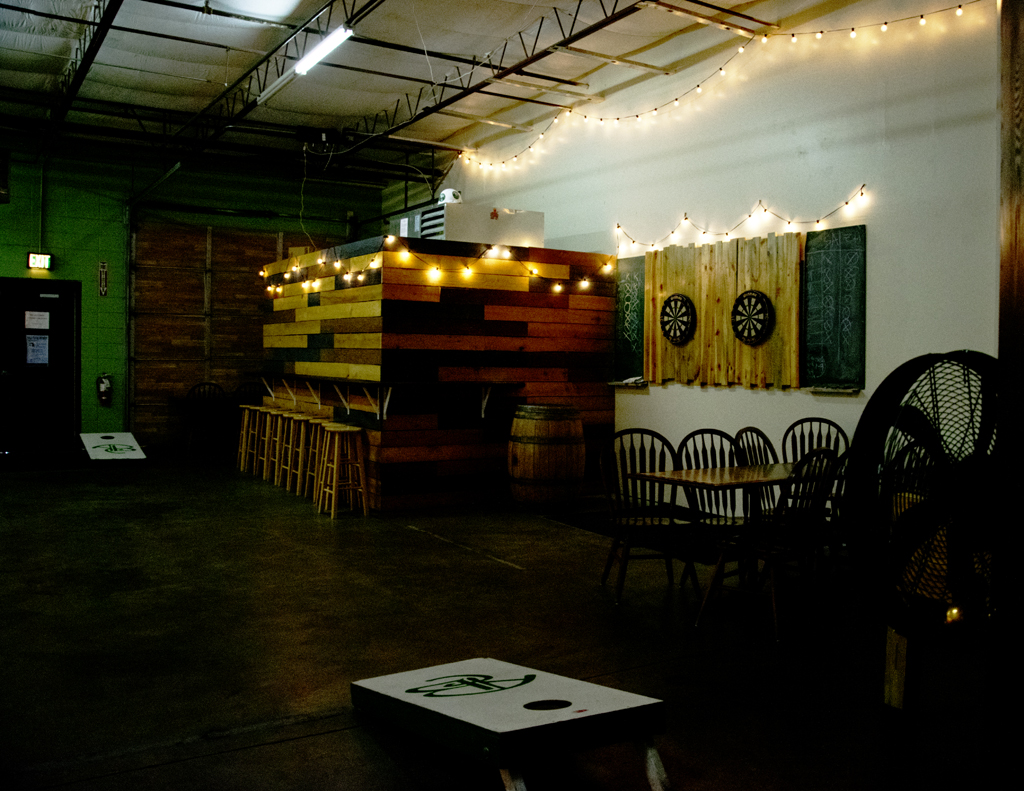 I was just in there long enough to shoot a couple of pix, then it was back to the bar to order some brew.

They only had eight beers on offer, as opposed to the couple of dozen over at Avery. But it was a small enough selection that we were able to try all eight of them in one flight:

The beer was definitely fresh. My favorite was the Ginger Bomb, kind of a ginger-beer-mixed-with-beer taste, which I love. My second fave was the Maceo Barker Oatmeal Stout, named after the owners’ dog Maceo, whom we also met – a lanky black dog with white chest and graying muzzle. The rest of the beer was good, but I don’t really like IPAs much, so they got ruled out rather quickly. As a third fave, if I had to pick one, was the Hempin’ Ain’t Easy, which contains some (non-psychotropic) hemp hearts. Interesting was the Sour Stout, a really sour beer that might be fun for a taste adventure.

A lot of the people filed out after a while and I was able to get a shot from the opposite side of the room from the bar. You can see how small it is: 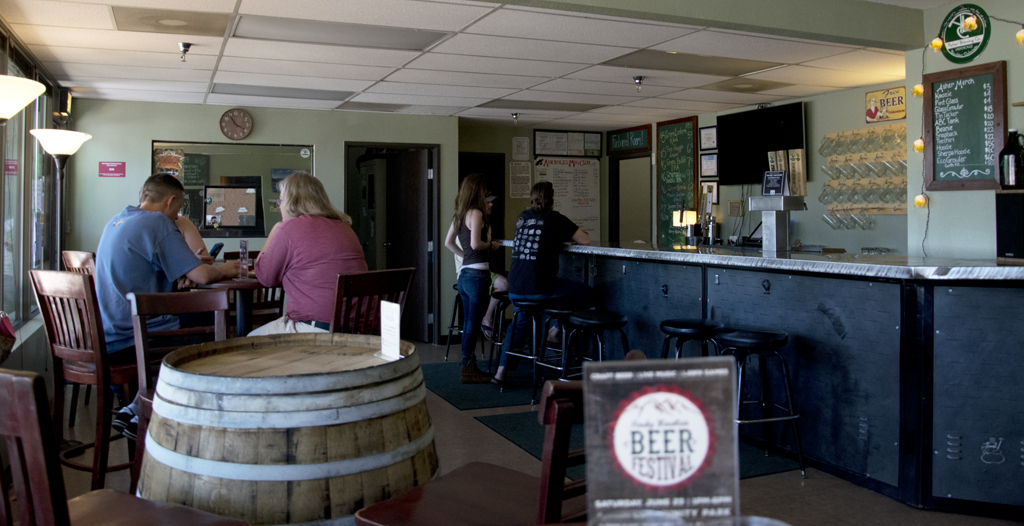 Eventually we made our way outside to enjoy the fabulous weather that day. It seemed to us that Asher is neighborhood joint, with many small groups making their way across the road from a nearby apartment complex. We met lots of friendly residents and their equally friendly dogs.

I really like the organic aspect of their products – ingredients are certified organic and are locally sourced when possible. They try to minimize their carbon footprint, too, by recycling, using wind energy, etc. This mindset is prevalent in Colorado, especially in the Boulder area, and these guys seem to have gotten it right while producing respectably competent beers in the process. They’re also involved in community support via donations and local events. You can also request a brewery tour while you’re there.

Speaking of tours, as we sat outdoors that afternoon, the Brewhop bus came by and gave us flyers. This bus tour is a hop-on/hop-off (no pun intended) affair that makes the pub rounds in three or four small area towns. I’d heard of it and now I have details, so look for a post on that in the future. If a beer-lover comes to visit us, it may be sooner rather than later! 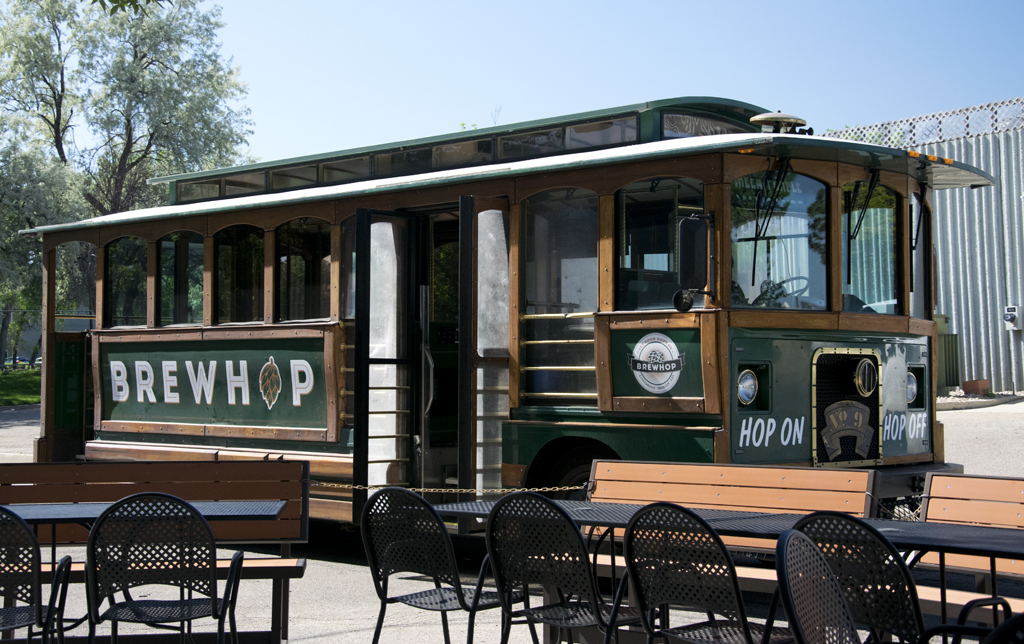 Asher is a pleasant little place, and a nice way to pass an afternoon in a quiet neighborhood sipping pleasant brews and petting local dogs. Cheers! 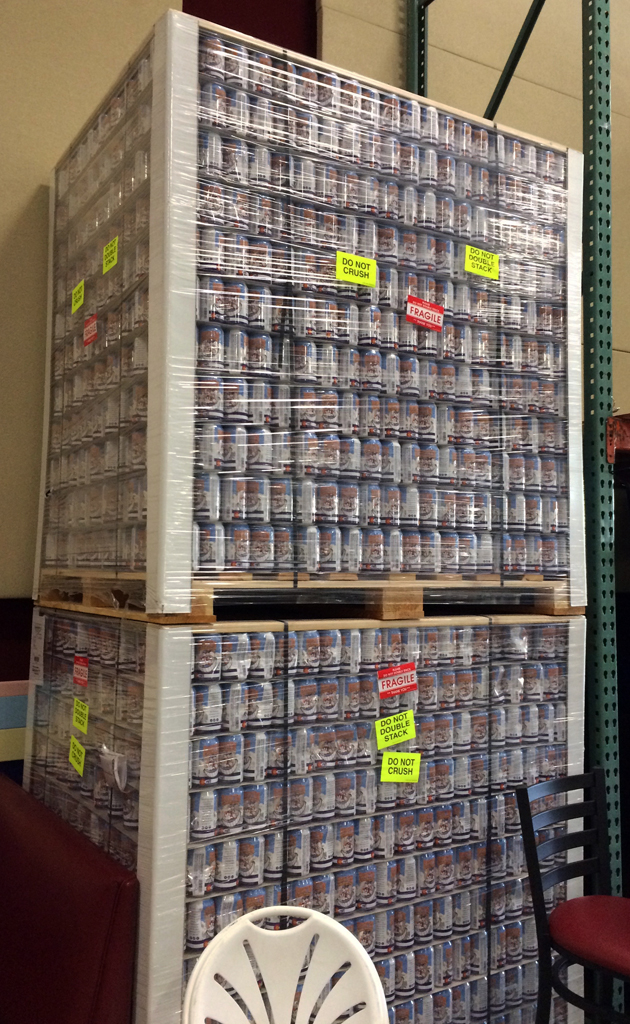