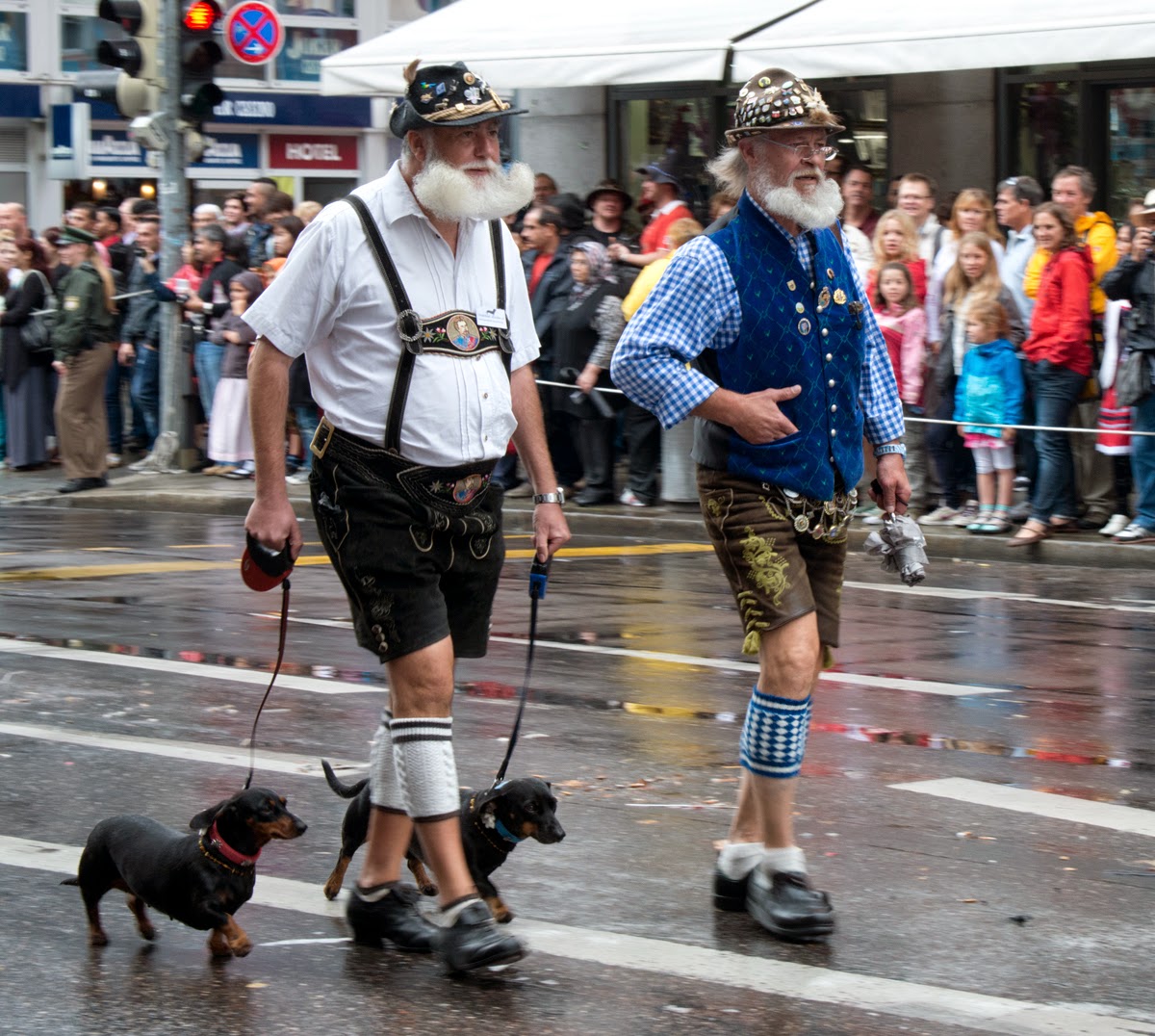 In keeping with the Oktoberfest theme:

The first, shorter one, is the opening procession, the Einzug der Wiesnwirte. The participants are the families that run the breweries, the hard-working servers and staff, and the magnificent, highly ornamented horses pulling the beer wagons. A few bands and other groups also march in this procession. I wanted to photograph the horses and their finery.

I hadn’t seen either of these parades before this year, though I’d had the drunken experience of the beer tents a few years ago. It truly is a joyous fest, and all in honor of the humble brew.

So, on September 20, my husband and I met our visitors-but-soon-to-be-fellow-expats, Lori and Tim, at Munich’s main train station among a throng of Dirndl and Lederhosen. Along with the crowd, we walked the few blocks to the Theresienwiese, or fest grounds.

It was a rainy day, as you’ll be able to tell from the following photos. So please don’t judge my images harshly; I was crammed between a group of giddy Asian girls and a stern German couple at the retaining rope. And I was practically kneeling in a puddle of water when it rained, which was often. In addition, I was wearing a rain jacket, thank heaven, because if I hadn’t been, water falling from umbrellas above me would have streamed right down my neck.

While we were waiting for the parade to begin, some classic Bavarians got our hopes up as they decided to entertain the crowds in advance: 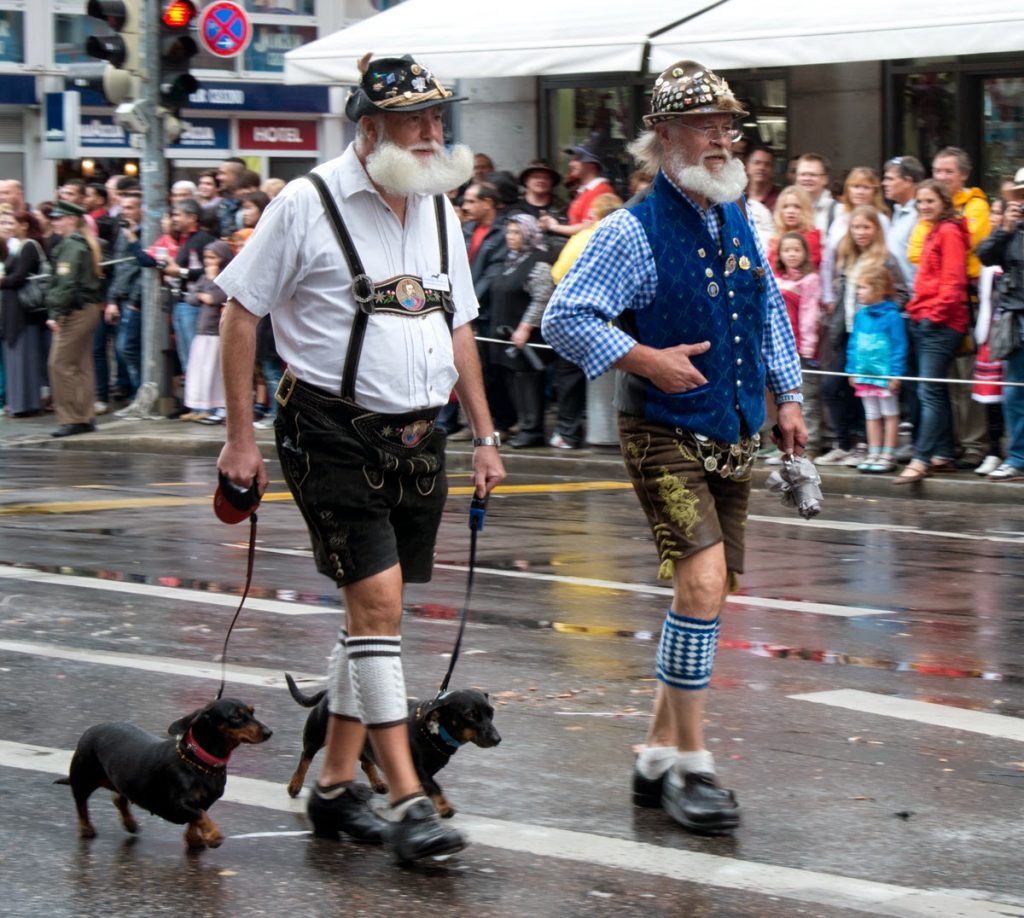 But that ended badly:

Anyway, here are some photos of the official procession. The first group of shots consists of those awesome work horses pulling wagons with the tent landlords, brewers’ families and service staff of the beer tents. Keep in mind that these poor souls getting soaked in the parade, in more ways than one, had to to go work in the tents as soon as the procession arrived at the fest grounds at the end of the route. 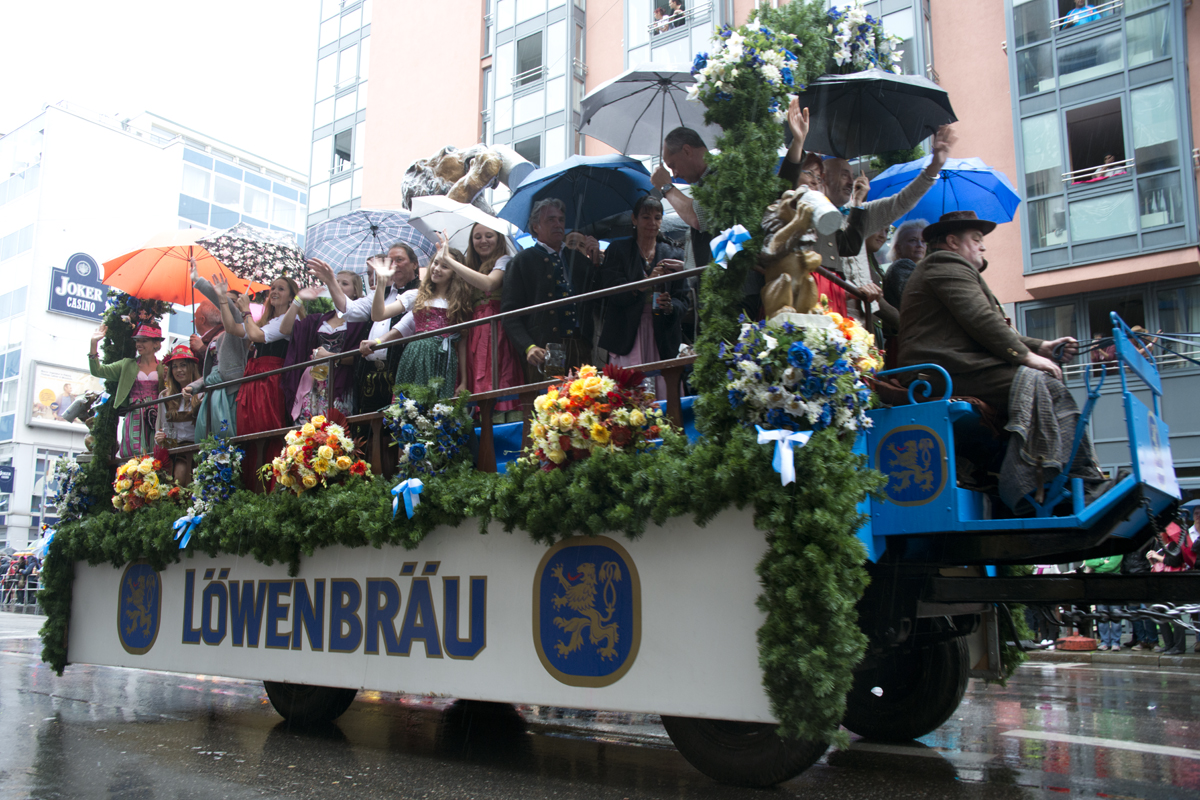 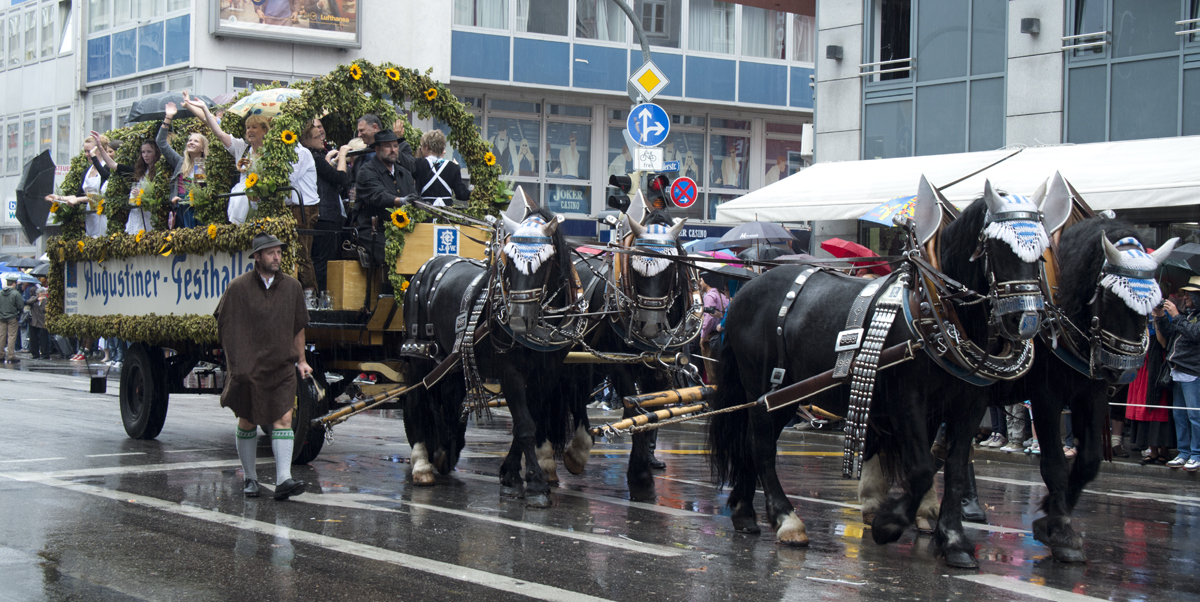 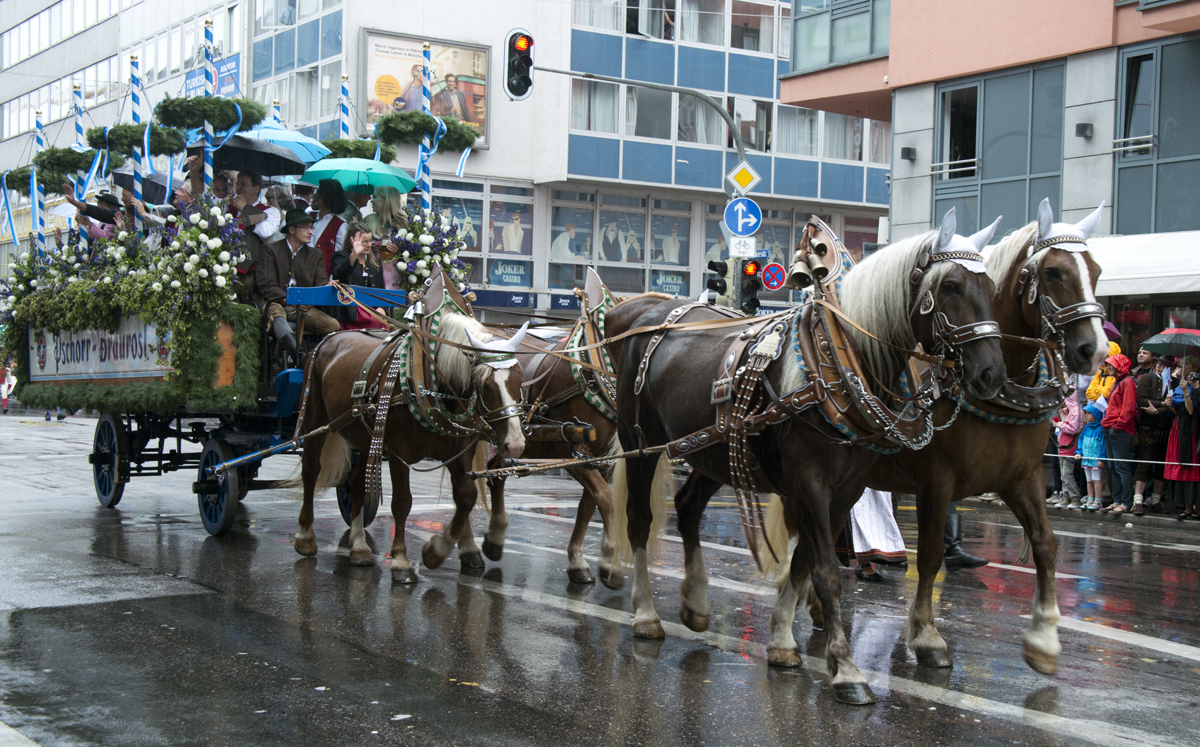 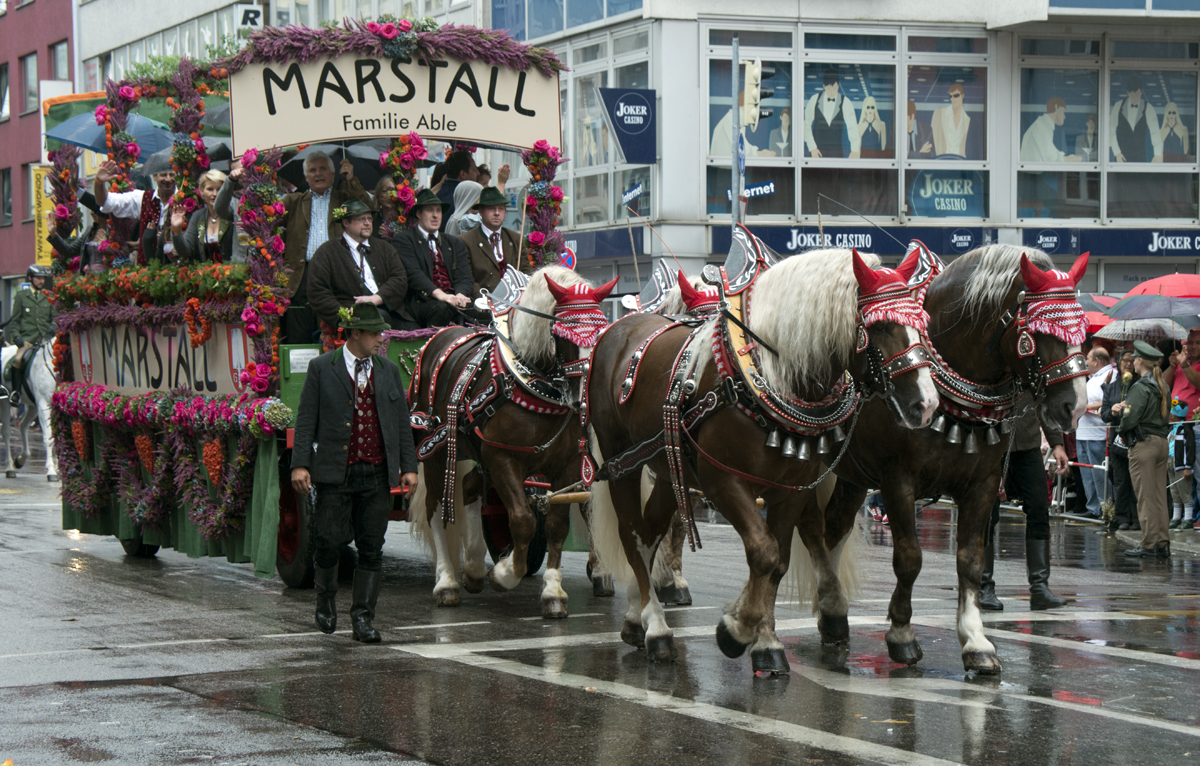 I’m glad I didn’t have to work the fest in waterlogged Lederhosen after this parade.

My second group of photos has more beautiful beasts pulling beer wagons. Not only do the wagons carry giant barrels inside, smaller barrels are suspended from the bottom of them, too. 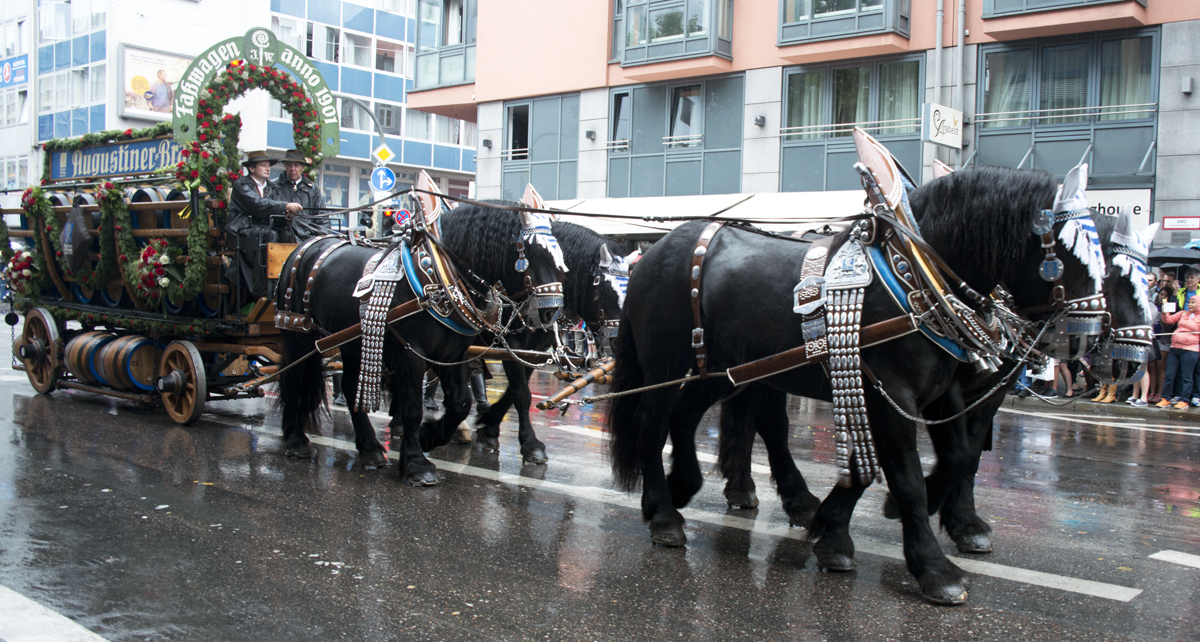 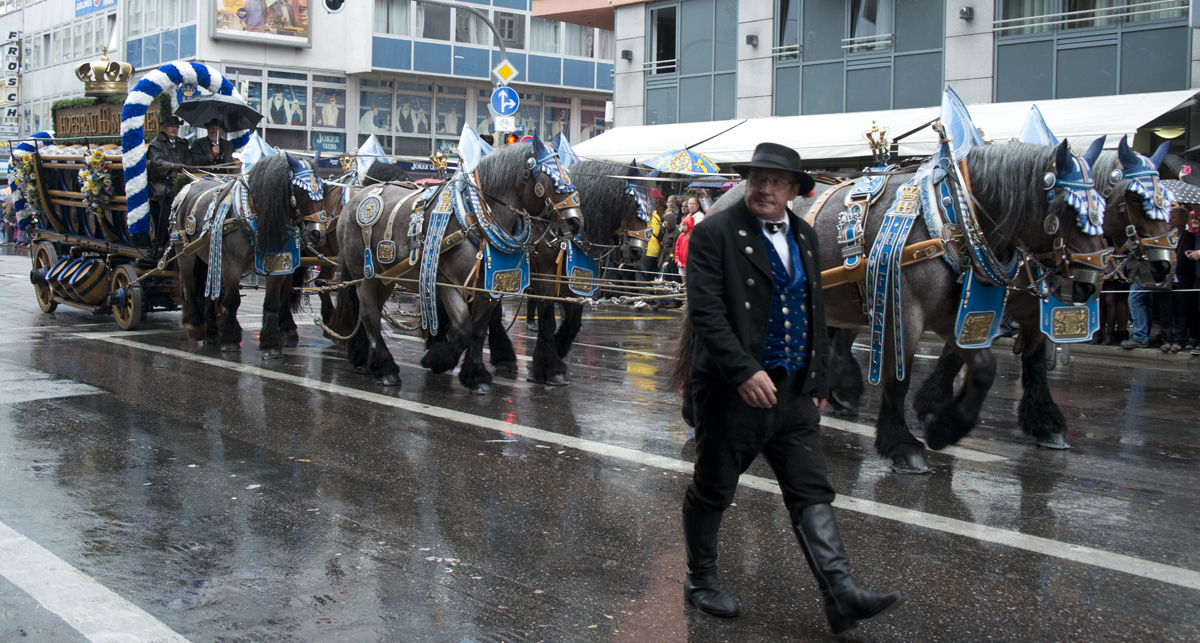 Lots of greenery and flowers adorn simply everything. 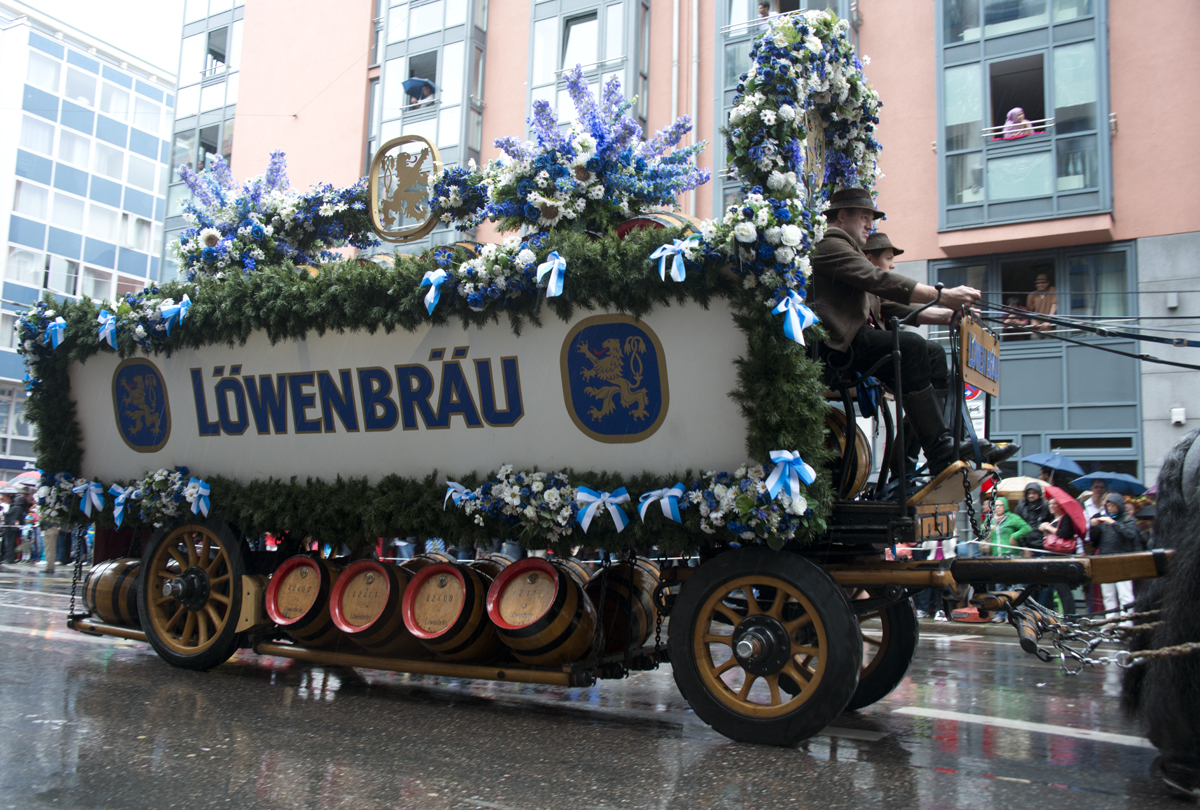 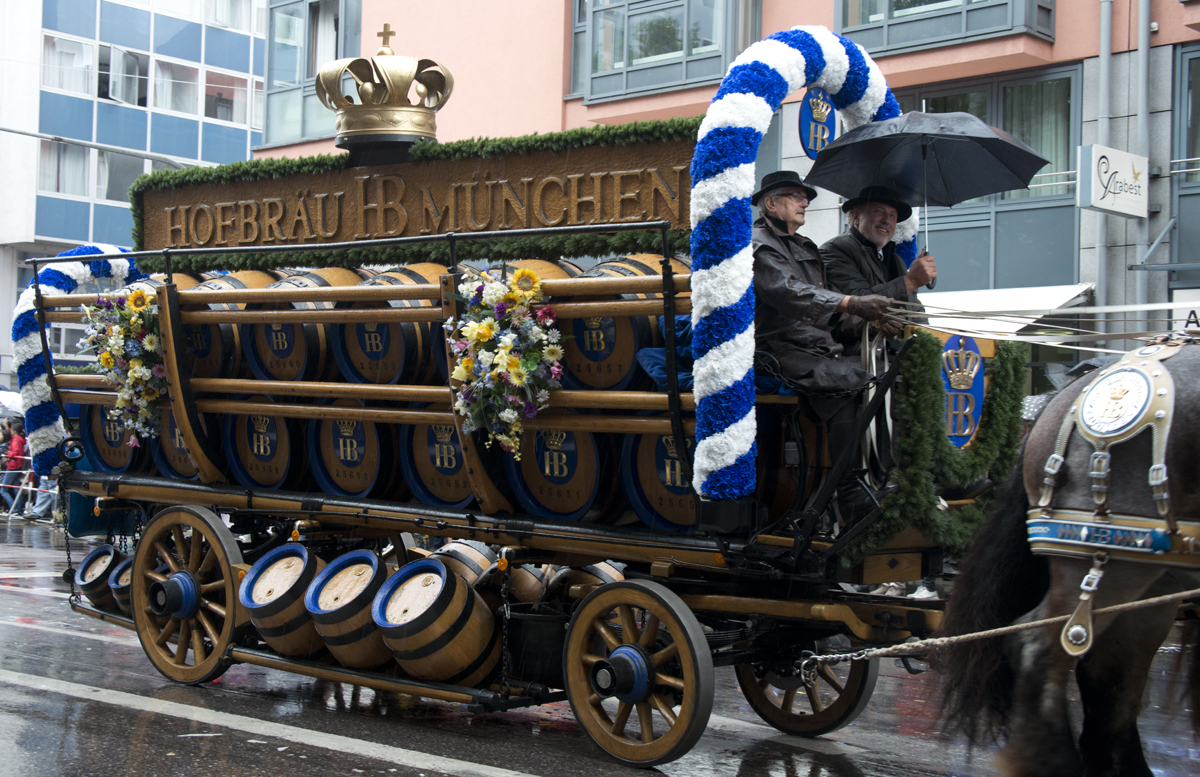 Of course you can’t have a Bavarian parade without a few marching bands:

And then there were miscellaneous groups such as the coopers’ guild, whose costumes would be familiar to you if you’ve ever seen the Glockenspiel figures on Marienplatz. They perform the traditional Schläffertanz, which was originally performed in 1517 in Marienplatz to commemorate the end of the plague. 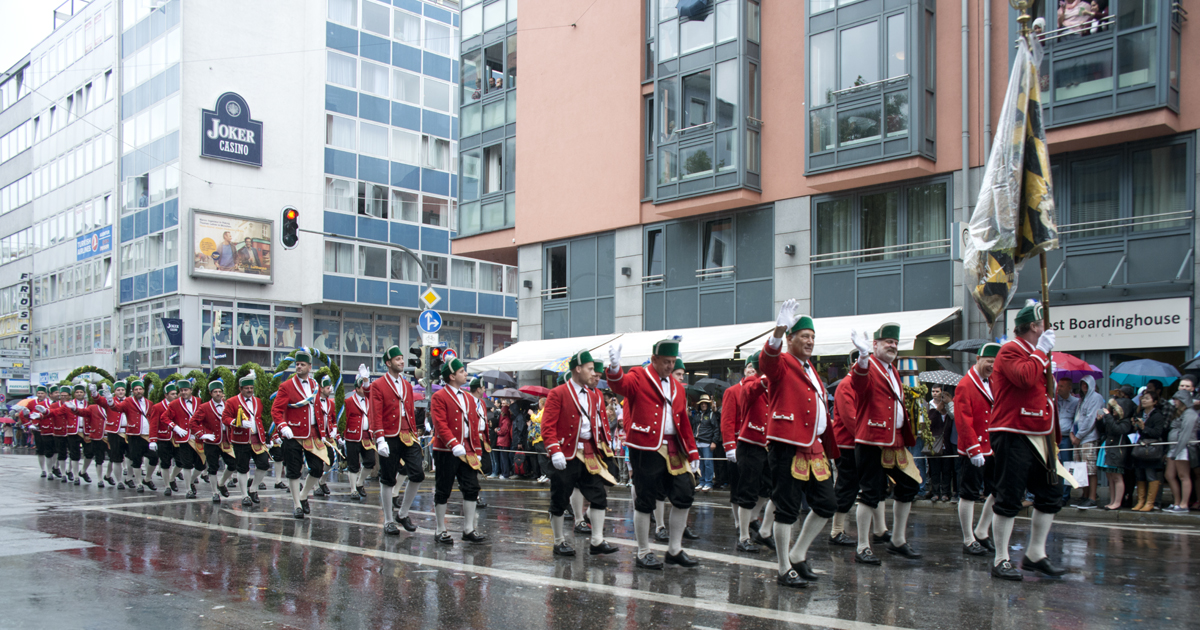 A winemaker’s guild had great costumes:

In the following photo, see the clown guy walking away beyond the policeman? He was indeed a clown and when I looked up from my camera he was right in my face and booped me on the nose with his finger. I thought it was funny until several people told me – much later – that I had a black dot on my nose. Clowns. 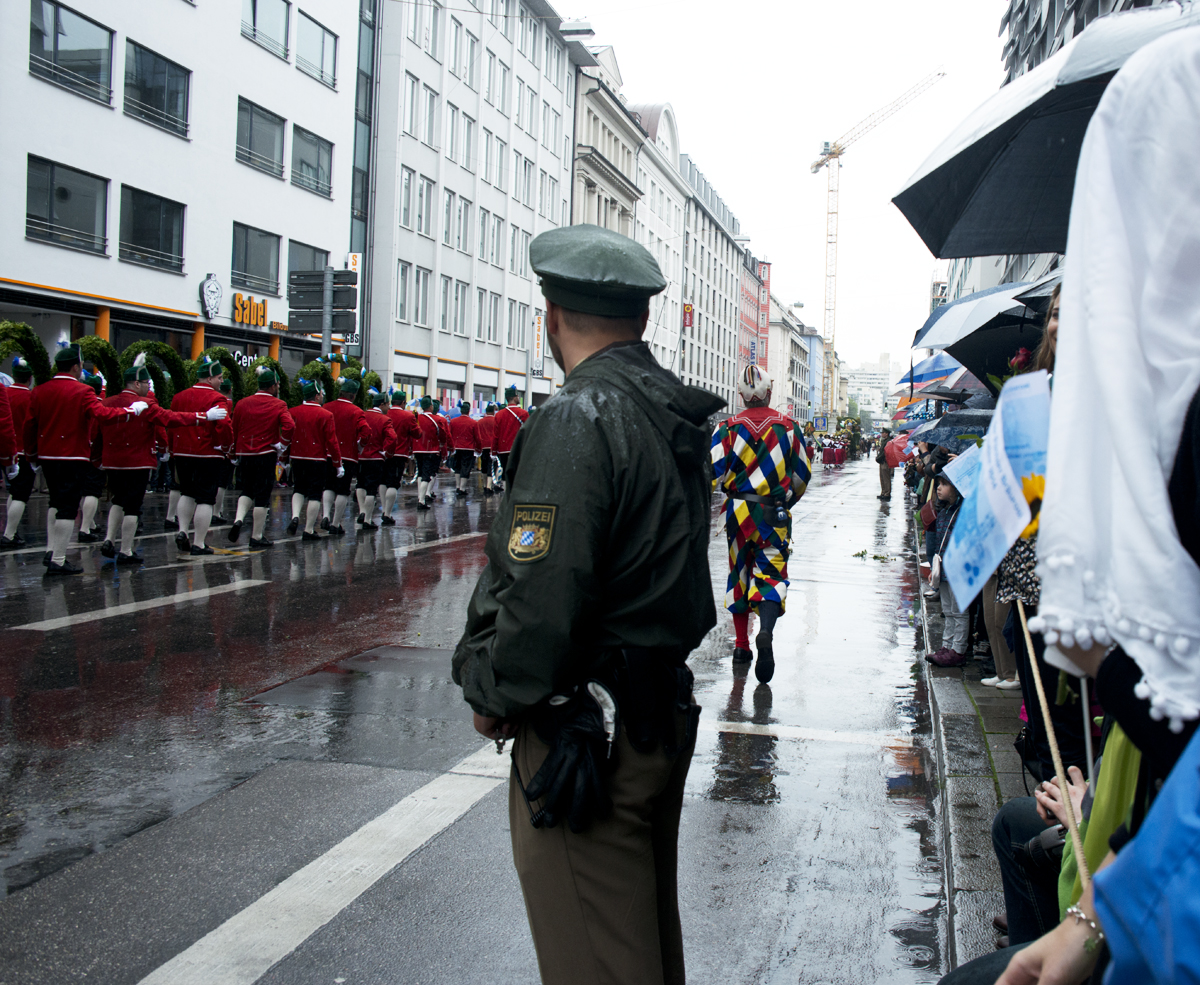 Near the end, an ox decided he was going to lunge right at me, at least it seemed so. Do you see him looking straight at me? Fortunately a strong farm hand was able to control him. Whew!

After the fun stuff, you can just see in the next photo the top of the big, orange street cleaners dispatched to clean up after the horses. I’d fled under an awning by that time.

Much of the crowd followed the procession to the fest grounds. However, we took a lunch break instead. It’s great that the restaurant had a television tuned to OktoberfestTV (a real thing 24/7 only during the fest) so we could watch them tap the first barrel of beer to start the fest.

Fortunately the sun had begun to shine and the weather had improved drastically by the time we finished lunch. Therefore, we decided to check out Oktoberfest ourselves. 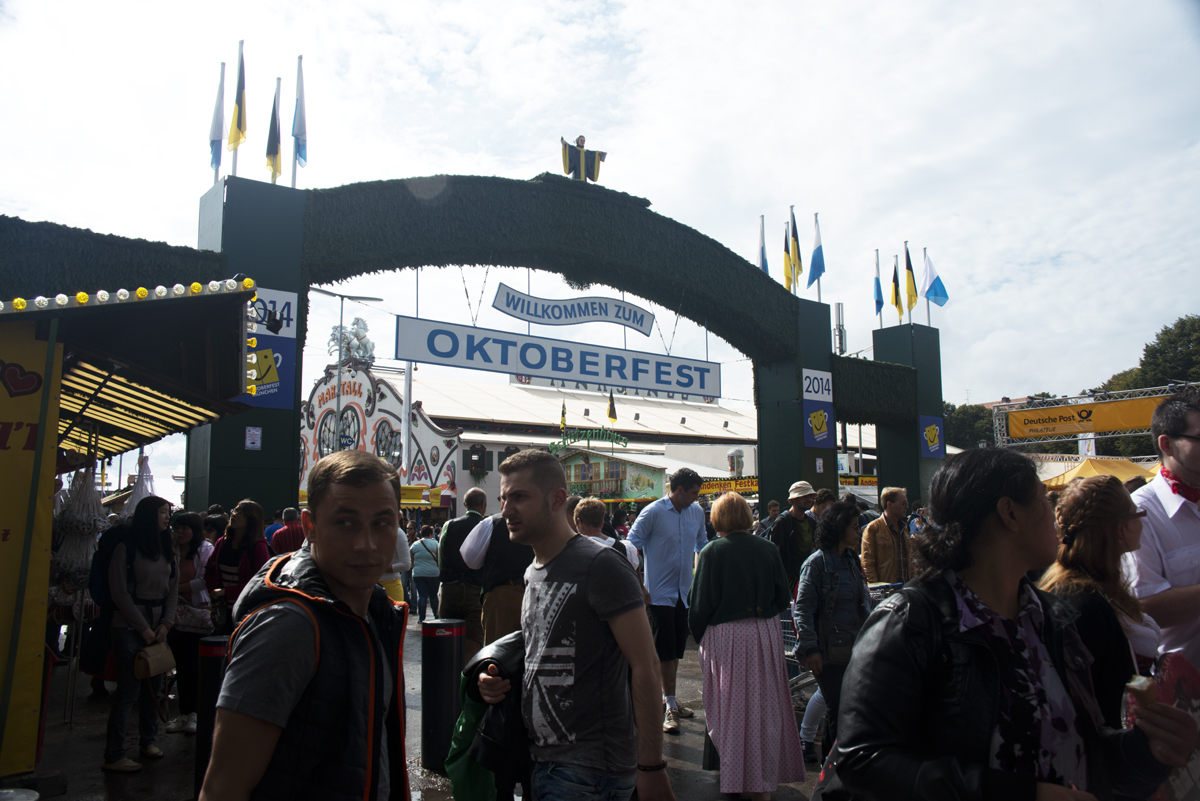 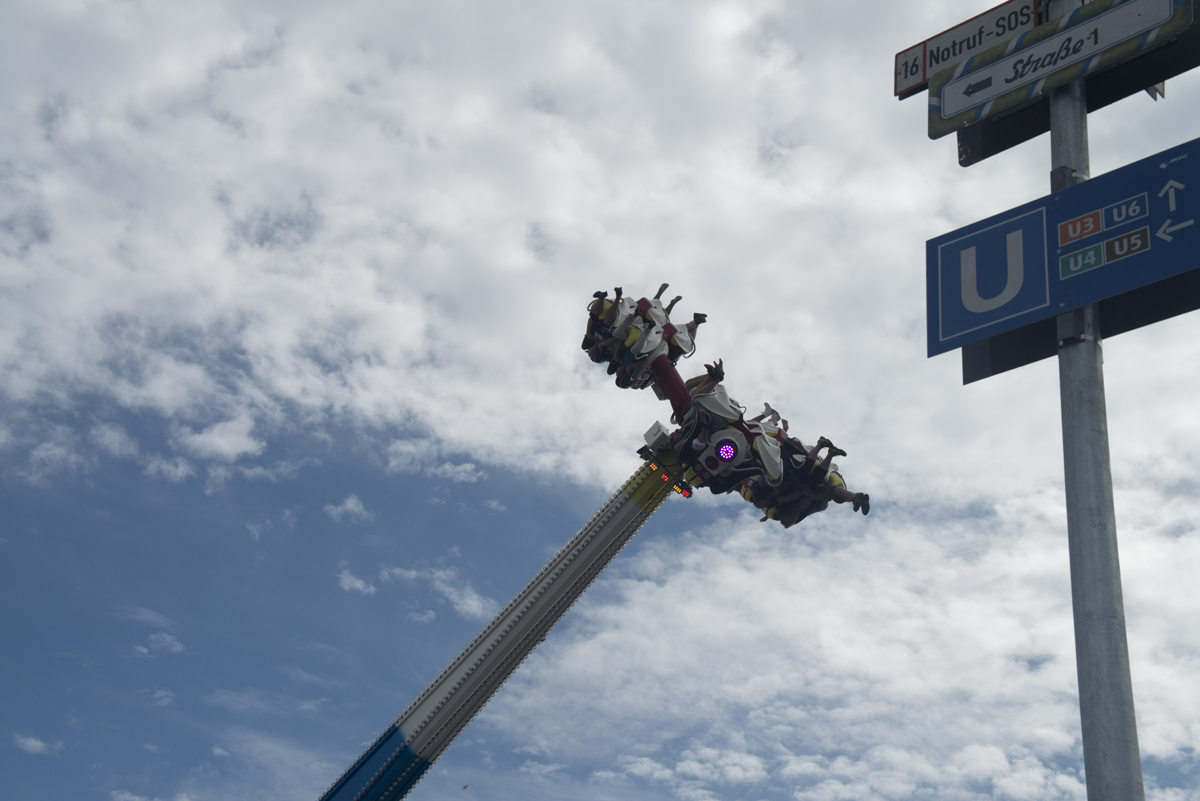 The horses and beer wagons were on display in front of the beer tents. And if you could elbow your way up to them, you could pet them and check out their finery. Even have your photo made with them. 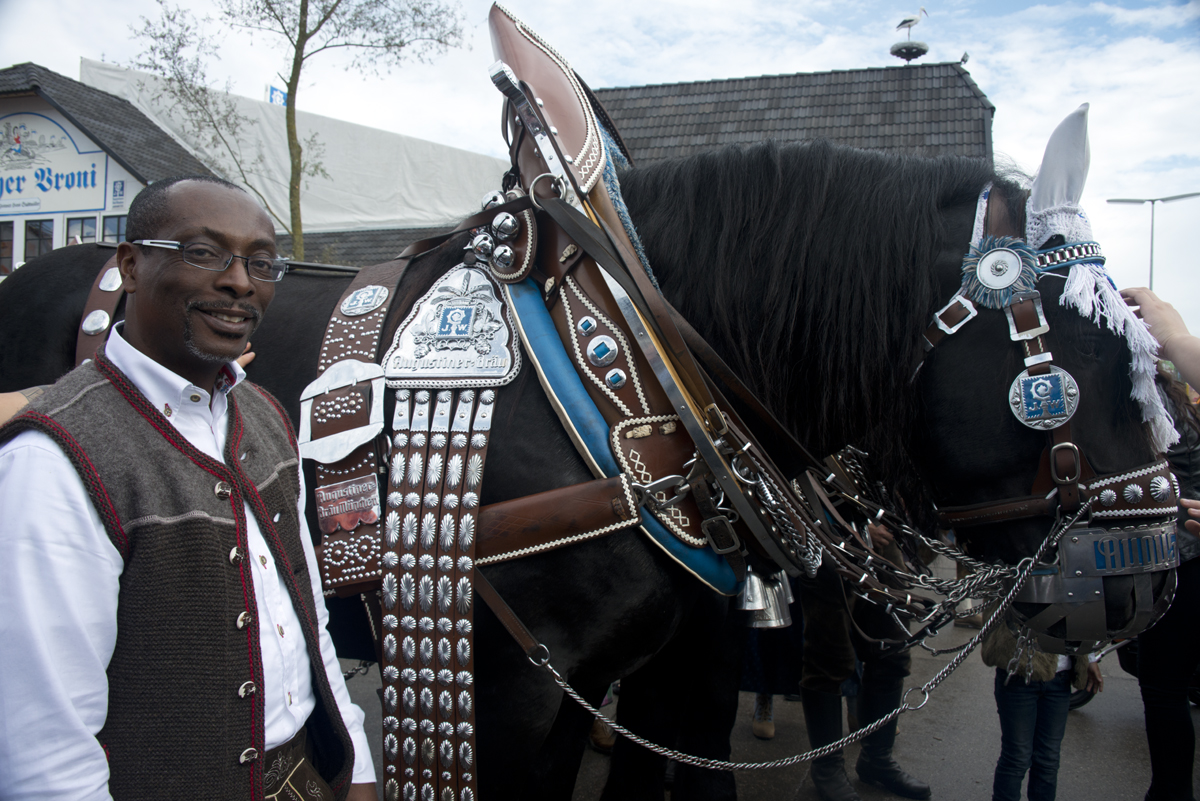 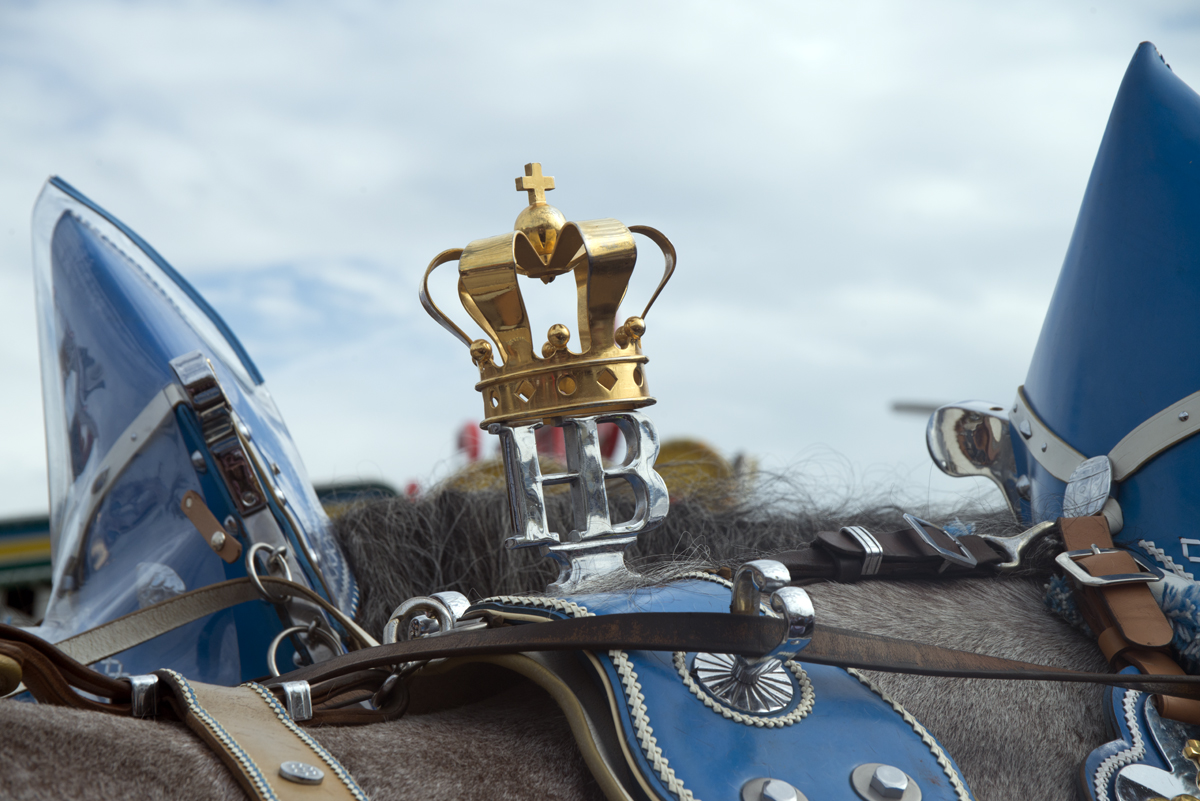 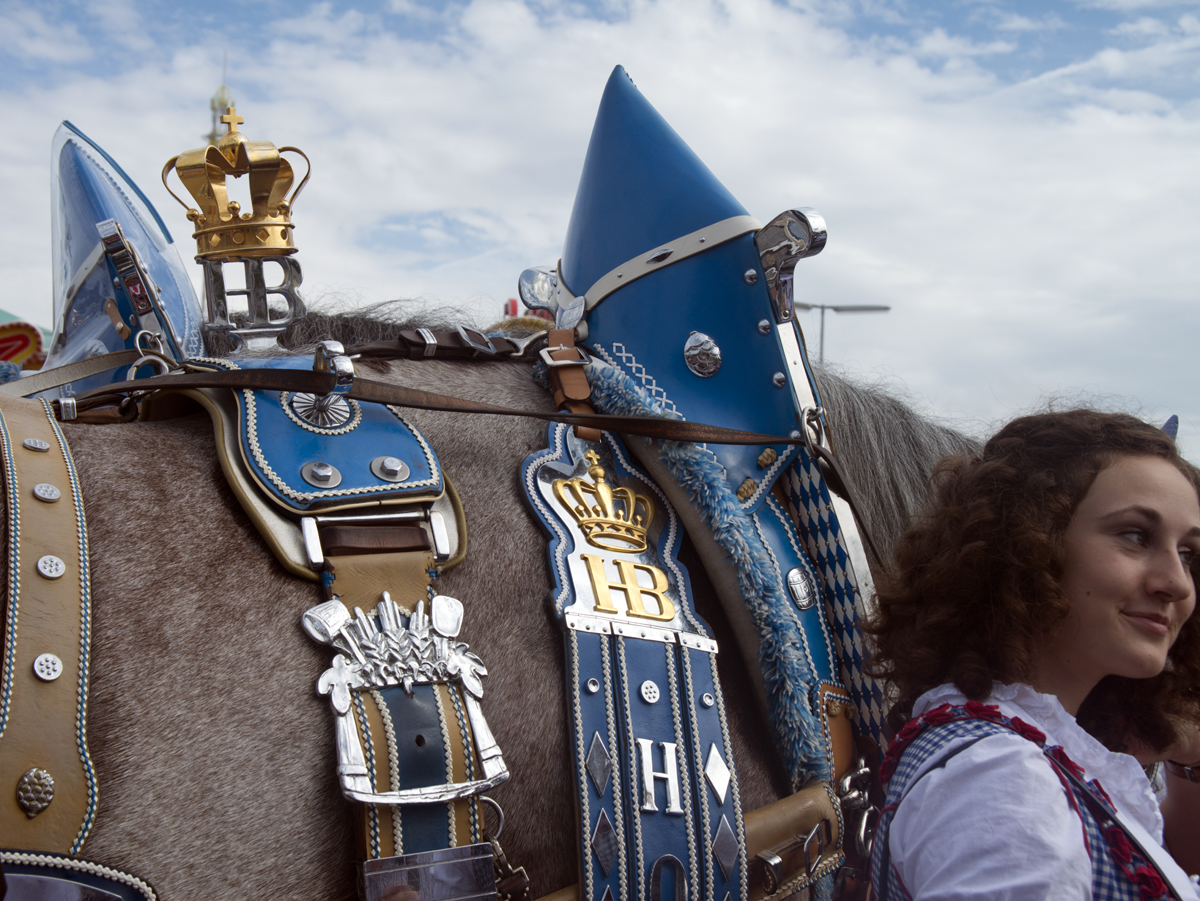 Though we didn’t get into a beer tent that day, Lori and Tim managed it the next day – but without us. We all went to a nearby Biergarten on Saturday, though, and had just as much fun as if we’d gotten into a tent. Wonderful weather, good beer and people from all over the world! My kinda weekend! 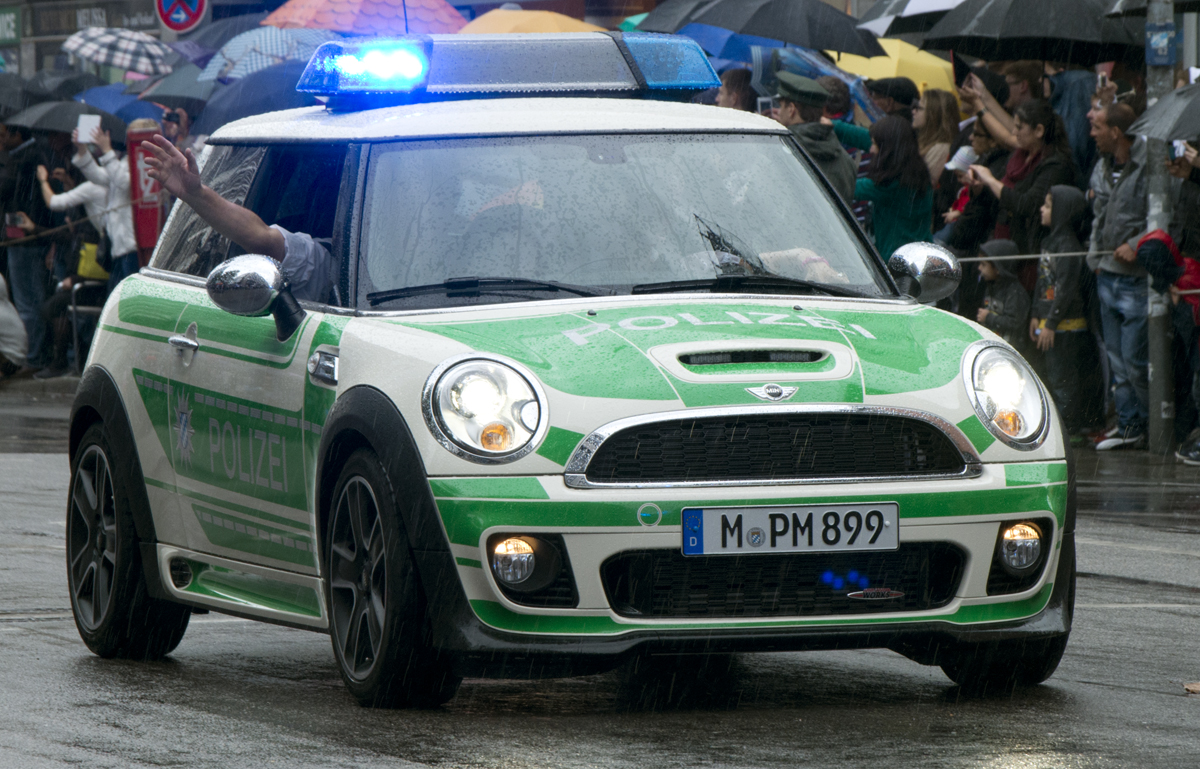