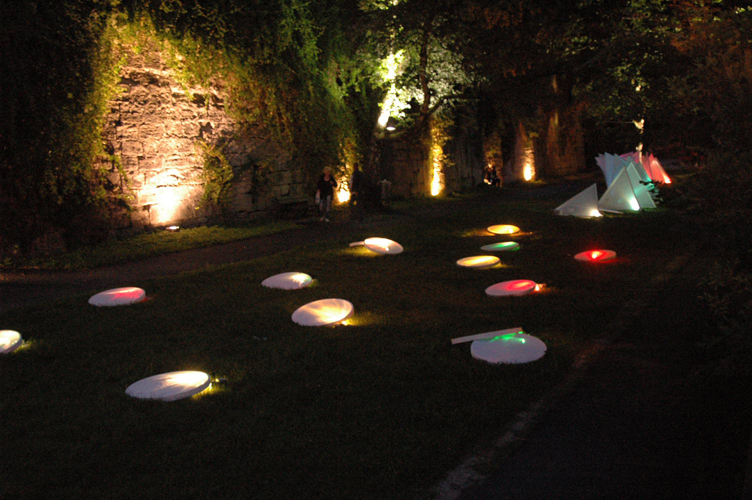 I hope everyone is enjoying the fabulosity that is the Olympics! If you didn’t see the opening ceremony, find it online and watch it as soon as you can. London did not disappoint. And there was a Mini in there, even though it wasn’t carrying the torch. What a celebration of who we are in the world!
Speaking of fabulous, I recently learned that the word “fabulist” is NOT someone who specializes in being fabulous, but someone who writes fables! As in Aesop. Go figure.
Anyway, last Friday, at the invitation of my great friends Anette and Michael, I headed to Kronach for the Kronach Leuchtet festival. You’ll remember Kronach from a previous travel journal where they held a killer medieval festival at the castle there.
I love visiting my friends there for many reasons – we have so much in common and the conversation is always lively and interesting. Anette usually cooks something delicious and we sit at their big, heavy dining room table for dinner and for hours afterward just talking over glasses of (usually Spanish) wine.
This time was no different. As an example of the things that come up in our conversations, last time I told them about the movie “The Wizard of Oz” and related how many of the idioms in American English come directly from that movie. Things like, “I don’t think we’re in Kansas anymore,” and “Pay no attention to the man behind the curtain.” They also now know when to appropriately hum If I Only Had a Brain.
Yes, I know, now you have THAT song in your head! But now, thanks to the Kronachians, I know that the German word for a song that sticks in your head is Ohrwurm, or “ear worm.”
You may remember that this couple owns a bookshop in Kronach, so they are very well read. During this visit, Annette turned me on to this book: 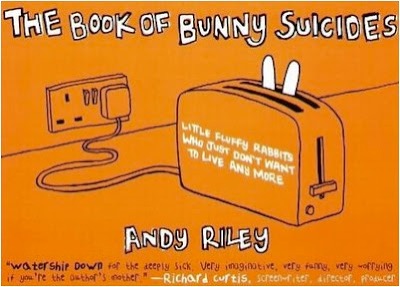 You can see we have similar senses of humor! Then, not to be outdone, Michael turned me on to the Church of the Flying SpaghettiMonster and Pastafarianism. I am a member of the Church of the Holy Crying Tangerine already, but now I’m considering converting.
We were joined at dinner by a friend of theirs named Wolfram, also from Kronach, who was in town visiting his parents. They actually called him Wolfie, which sounded more like what Mozart’s wife called him (“Volfie”) in the movie Amadeus. It was hard for me to hear it, even harder for me to say it, without laughing, but I managed!
Kronach Leuchtet translates literally as “Kronach lights up” or “Kronach shines.” It’s an after-dark spectacle that encompasses the entire town. Municipal areas and private homes and businesses are all decorated with lights. There is a laser light show on the castle walls as well.
In addition, that night was high school graduation, which takes place in the churches there, and then it became open house night for the churches, so they all stayed open. Also, most of the shops were open for the evening festivities. There were lots of people and activity on the streets of this little burg nestled against the hill below the
castle.
We started out about 10:00 p.m. and headed toward the opposite end of town. I didn’t have my tripod, but I managed a couple of decent shots for you that might give you the idea of what the town looked like:

Anette kept saying we were on our way to see the jellyfish, but I didn’t exactly know what in the world she was talking about. We presently arrived at a shop whose owners had hung paper decorations and lit them creatively to make their little courtyard look like an aquarium. I believe it was at that juncture that Michael was inspired to bring up the Flying Spaghetti Monster: 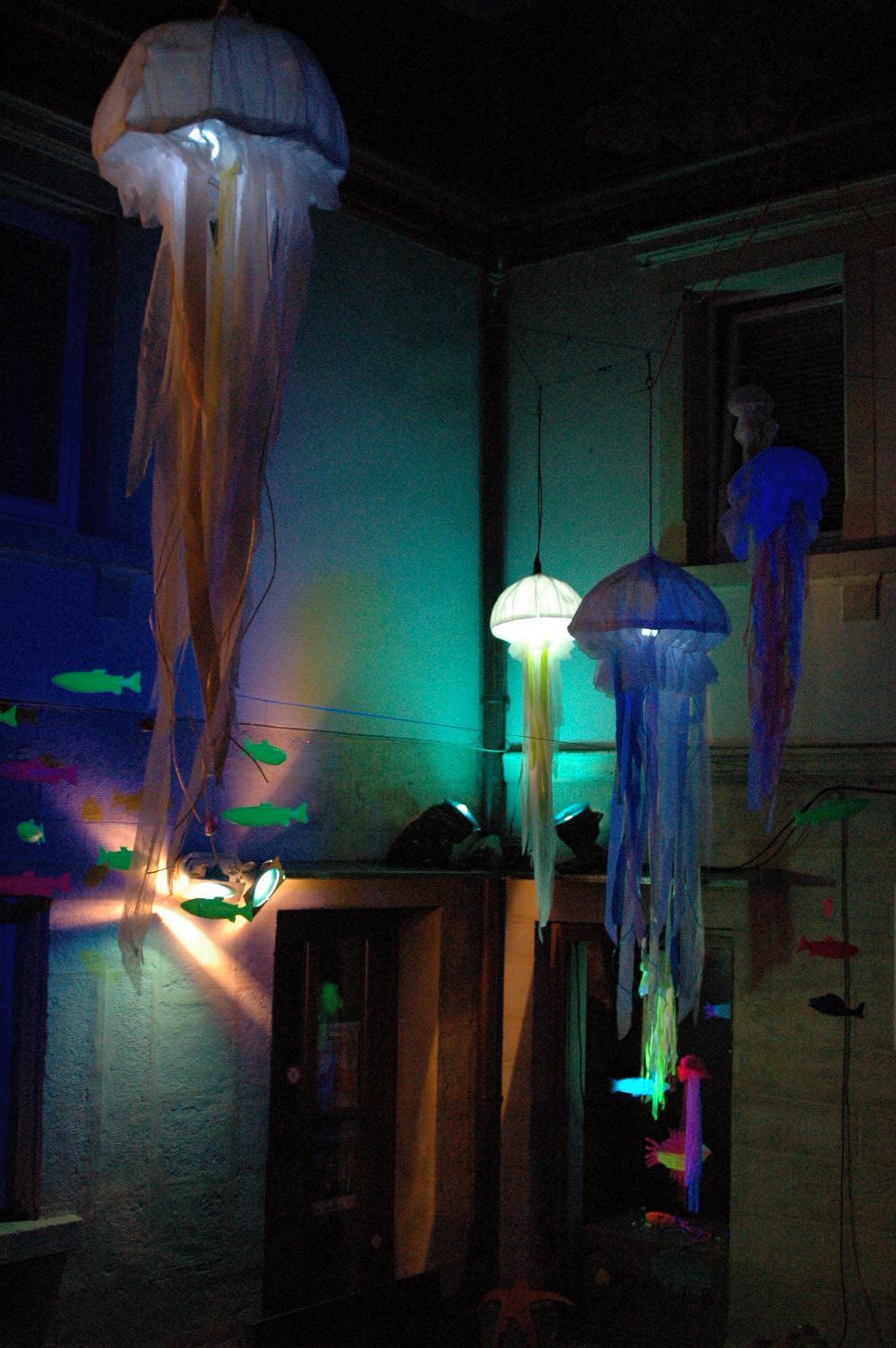 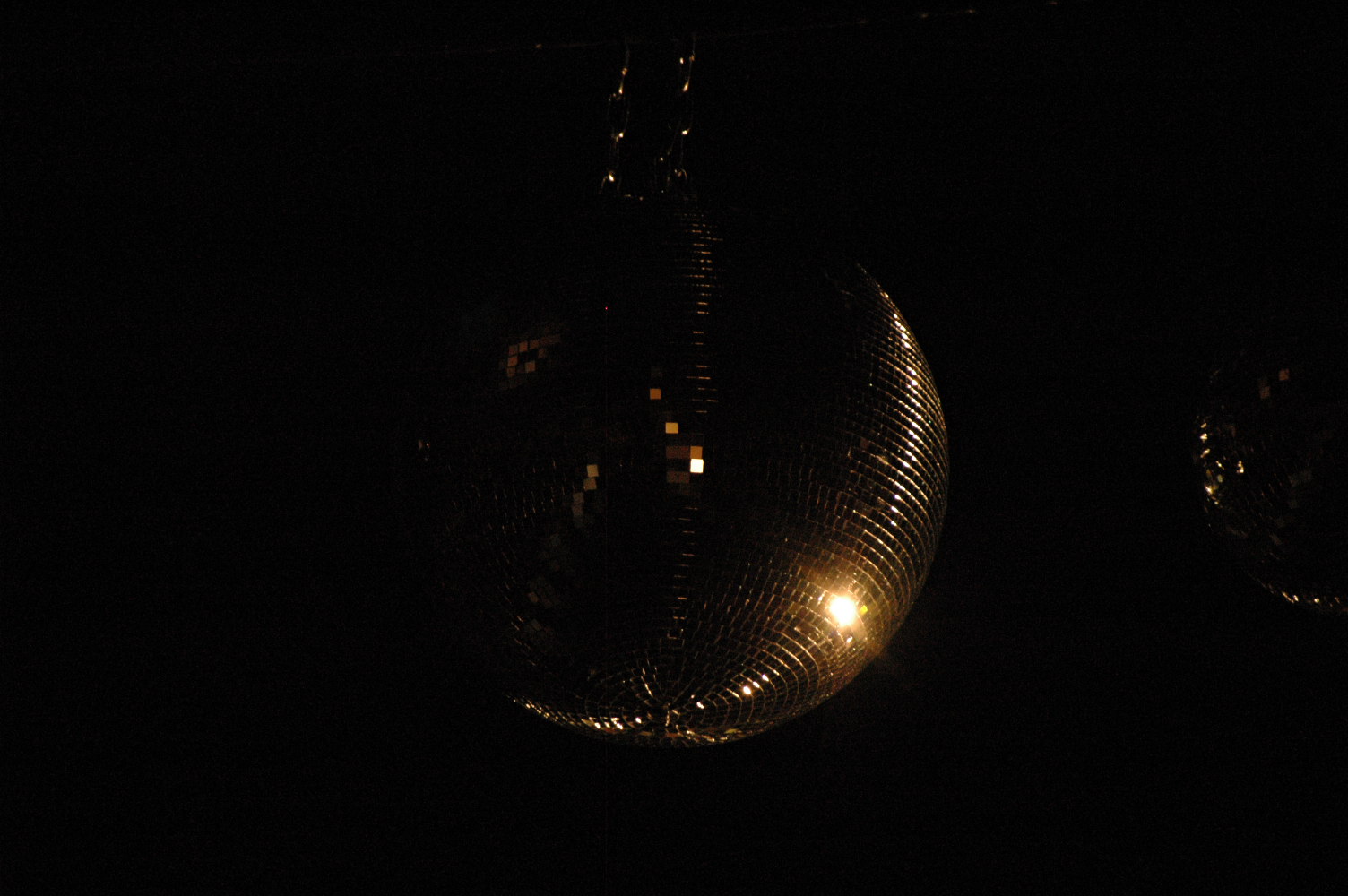 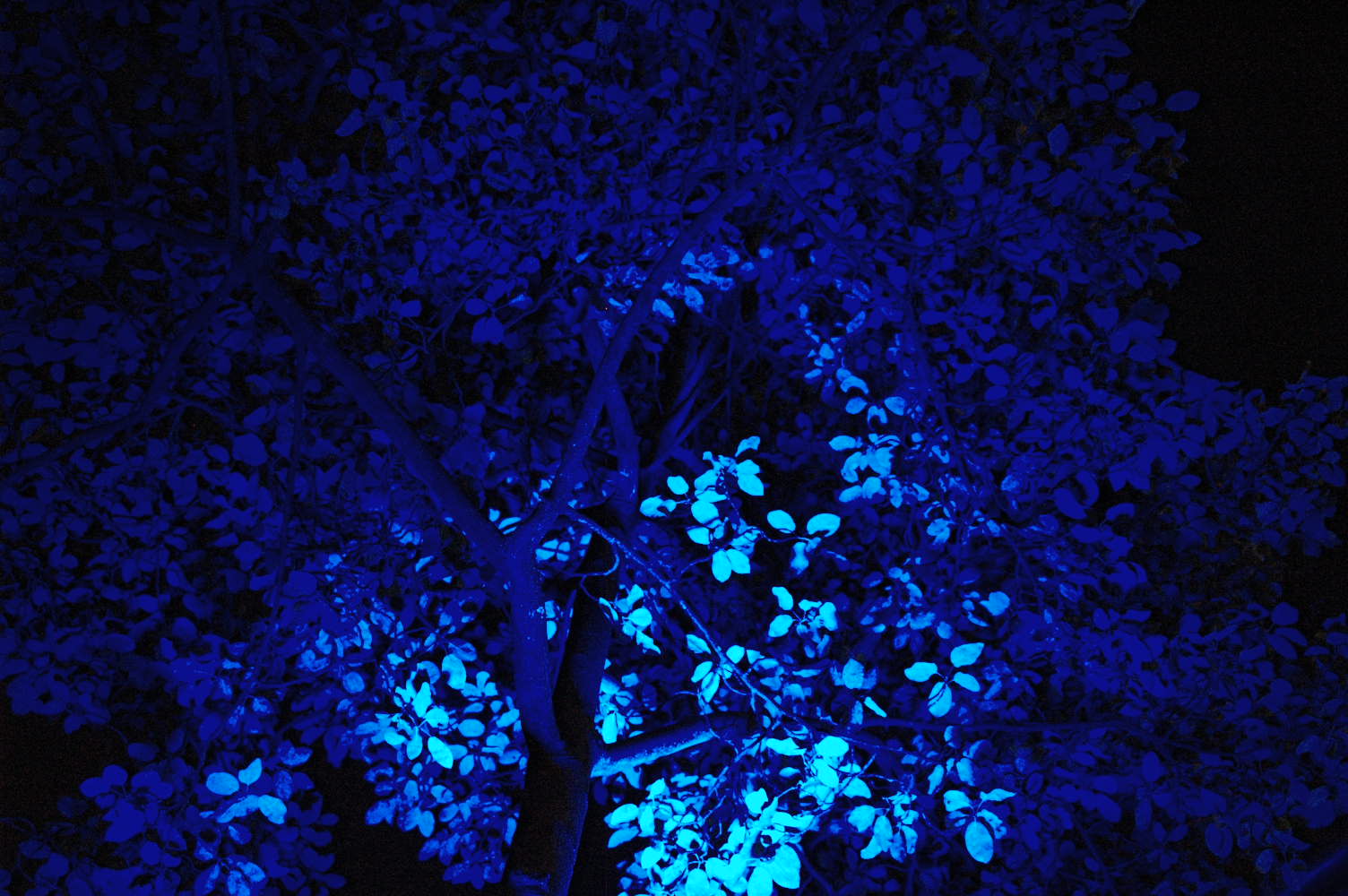 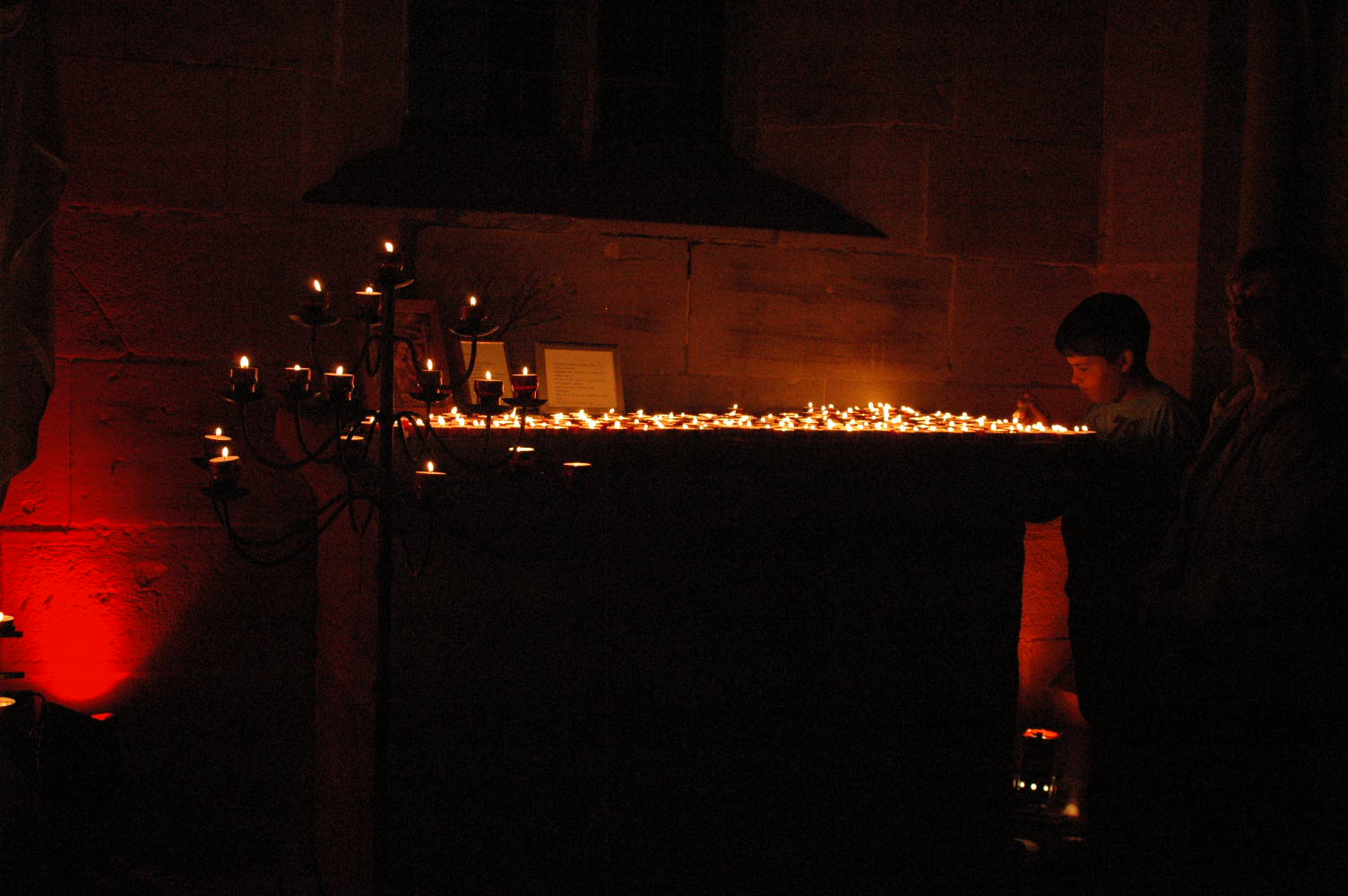 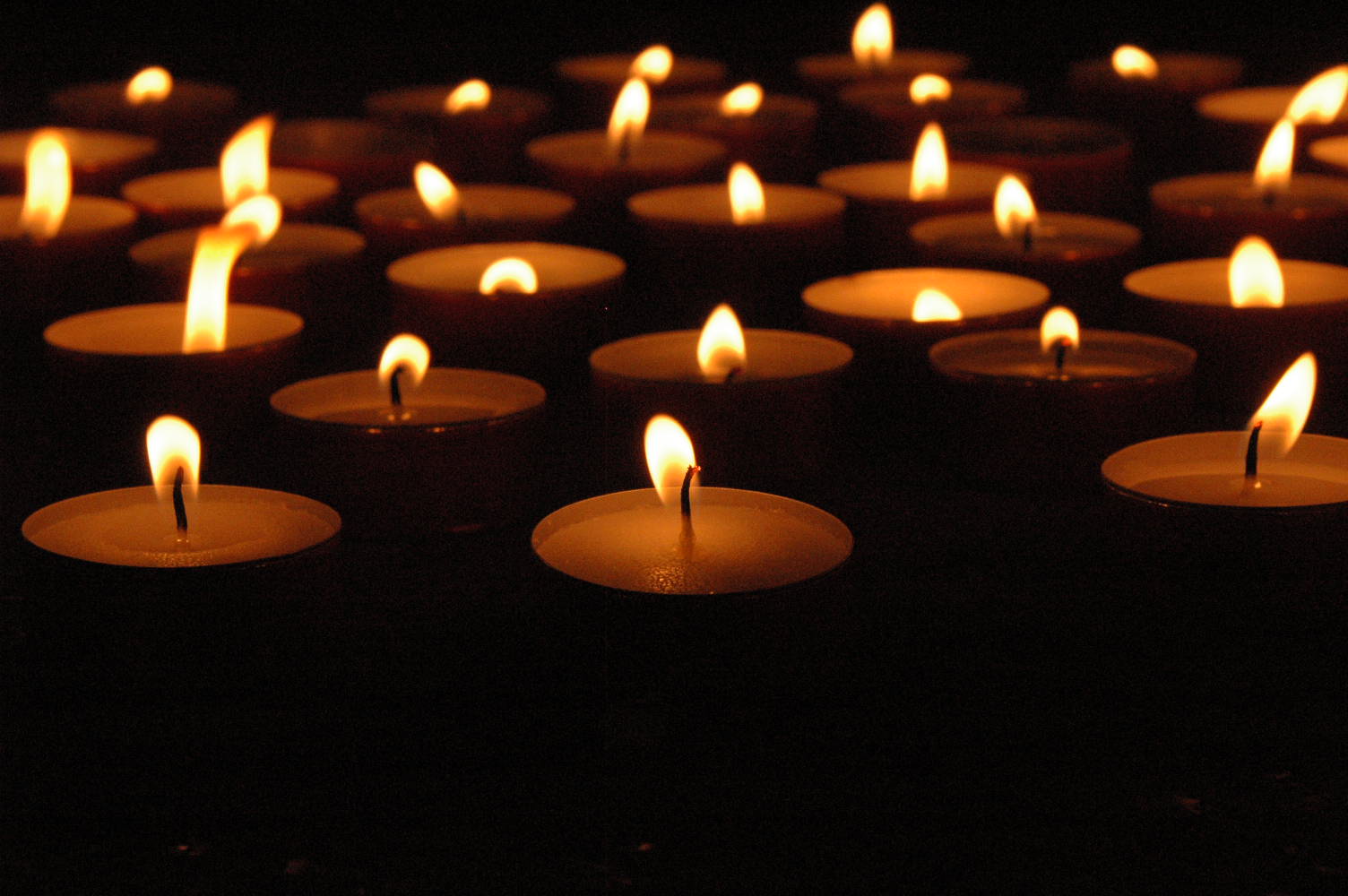 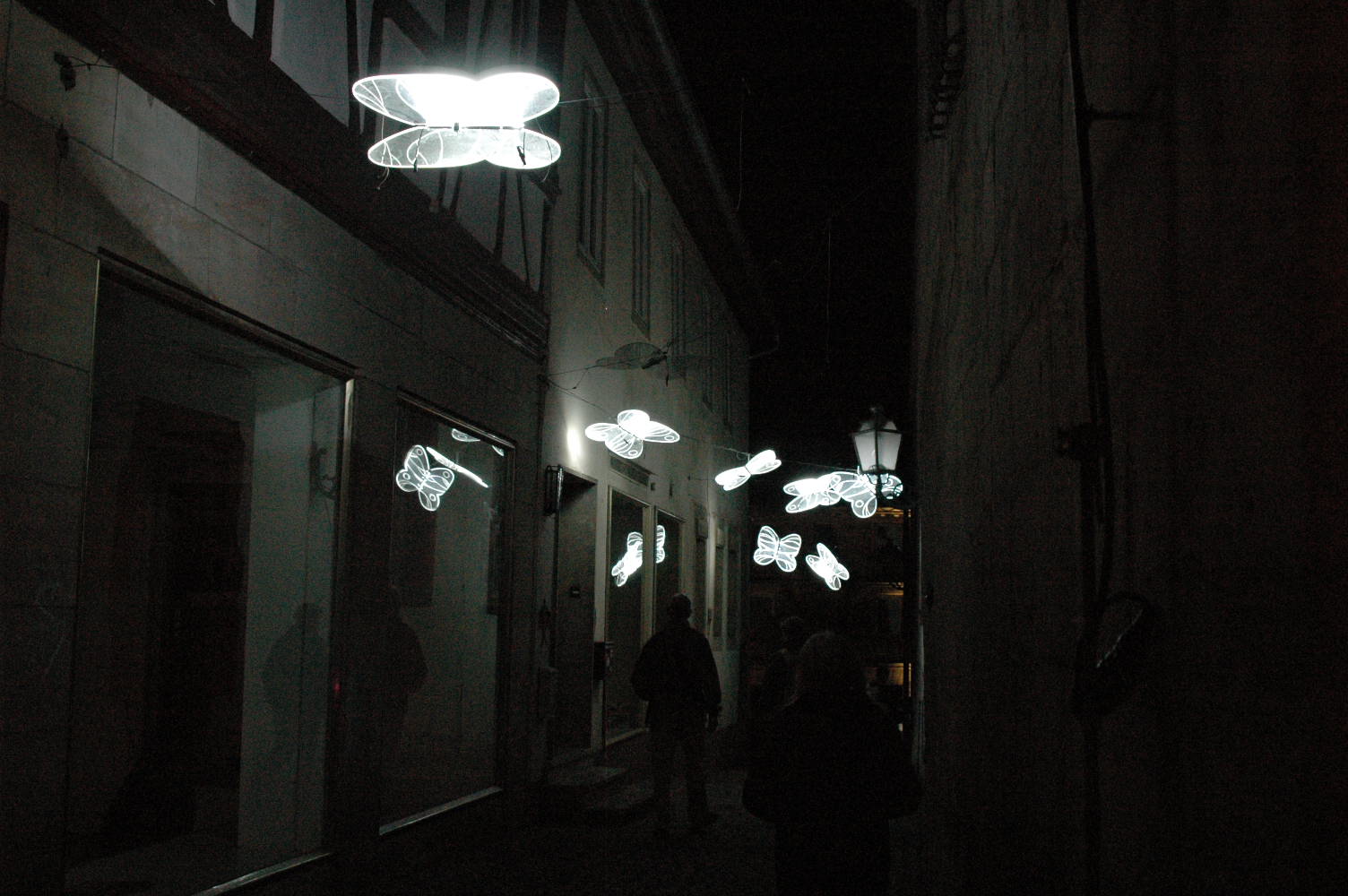 We wove back and forth through town and saw just about everything related to the lighting. There were art installations in some cellars under the town, there was a ballet dance performance in silhouette behind a big fabric screen in one courtyard, and we peeked into the churches along the way. We saw a couple of different live bands, a couple of pretty loud DJ booths, and a main stage with a decent rock act going on. It seemed that every citizen was out and about that night.We dropped by the ceramic shop owned by the guy from whom I bought my moose mug at his tent during the medieval fest. This time I bought a ceramic garlic keeper. Fortunately it still looked great the next day – I couldn’t see it very well by candlelight, which was the only illumination in the shop when I bought it!
Our last stop on this stroll was the castle above town. 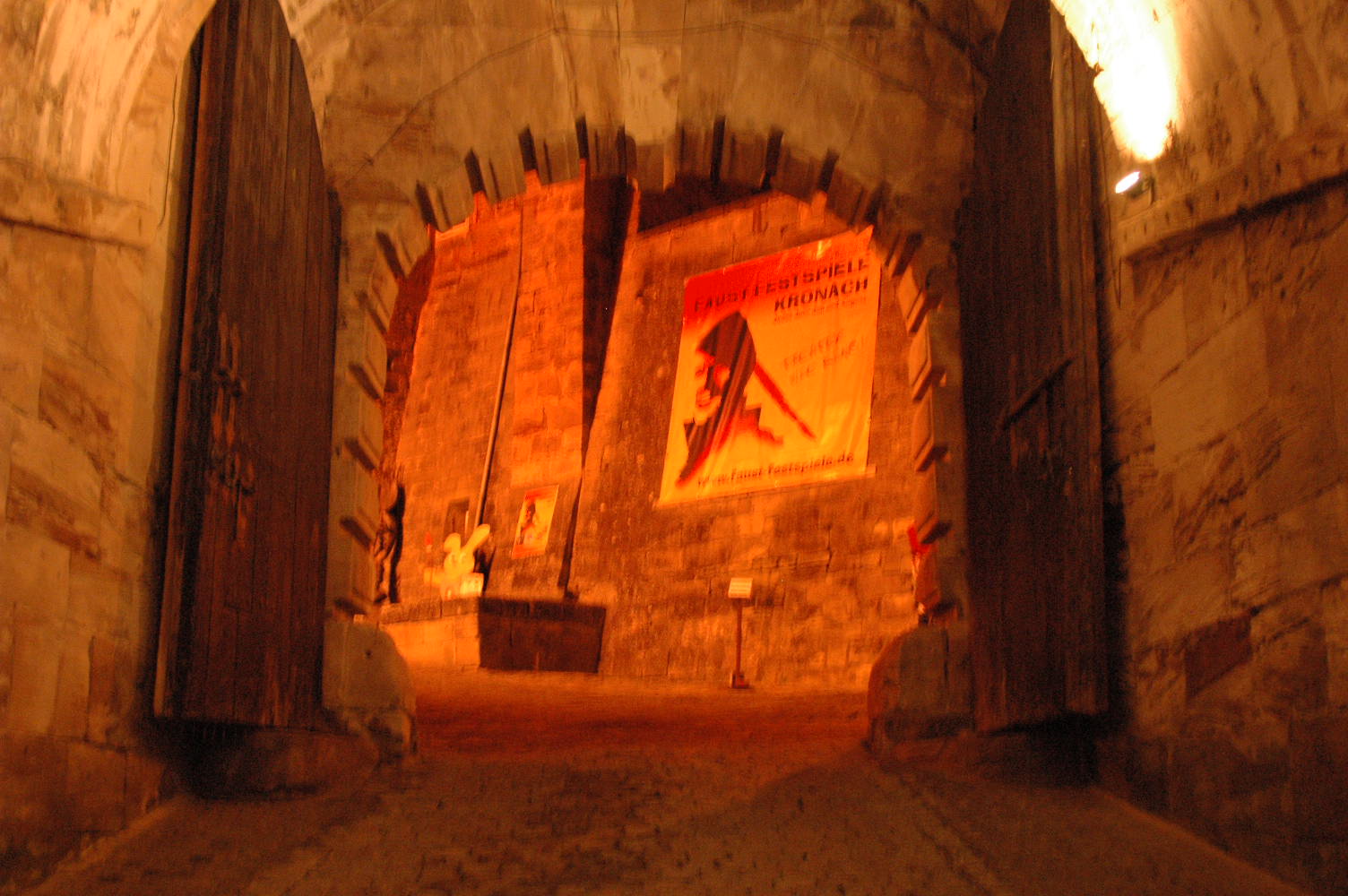 There was a hot-air balloon up there giving a glow show in conjunction with the laser light show: 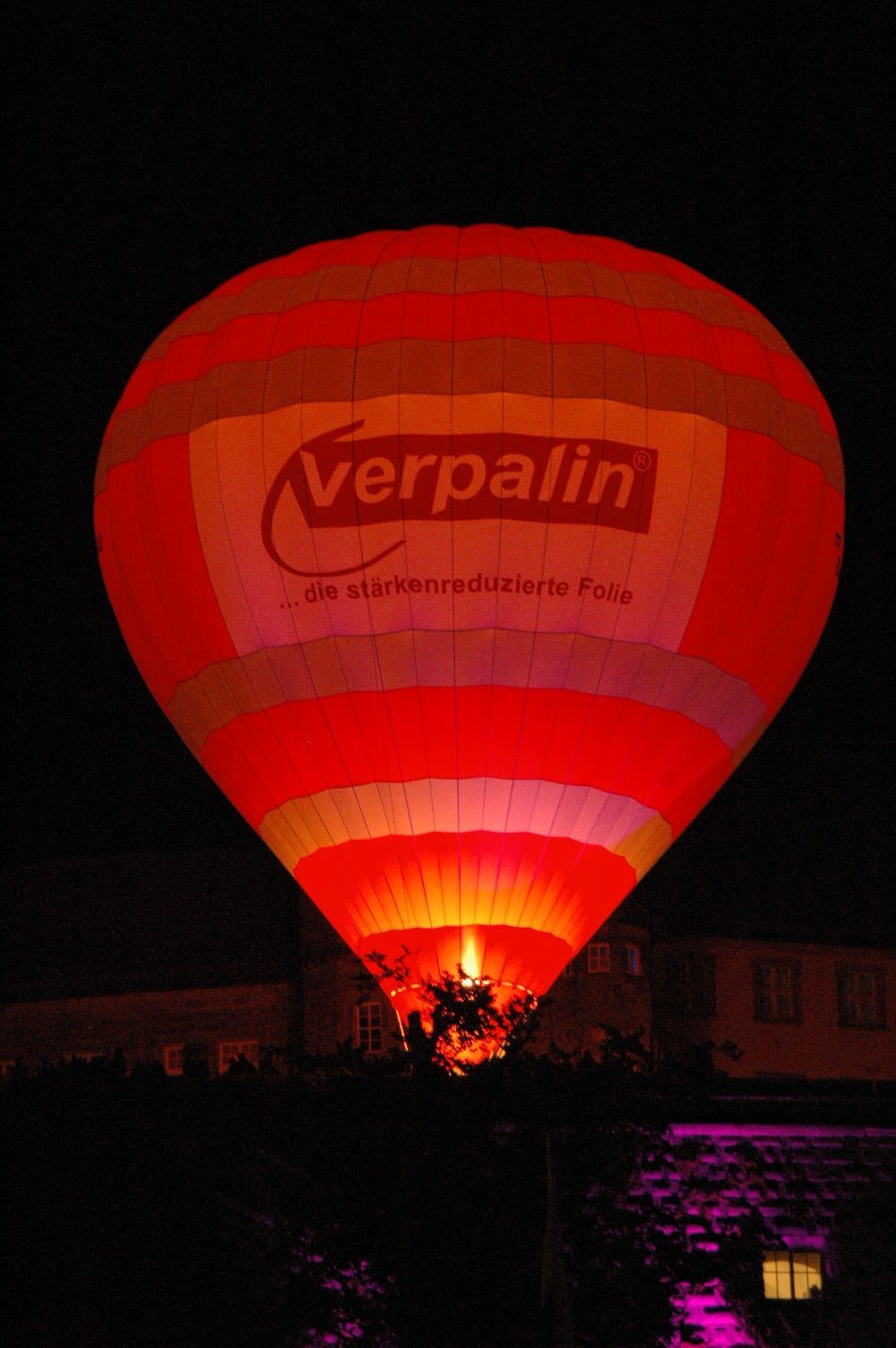 We intended to visit the museum in the castle, which is supposed to be a good one and supposed to have been open late for the fest. However, they were just closing as we arrived around midnight, so we didn’t get to see it. It’s on the list for next time.
It was an interesting night and a wonderful visit. But I think Anette was a little disappointed because it didn’t measure up to years past in her opinion. But not having anything to compare it to, I was quite satisfied. In any event, I got to visit my friends and meet Wolfie!
It was a short visit, though, and too soon over. I spent the night in their lovely house, but came right back home the next morning because I had an appointment to meet another friend and head to Regensburg for Saturday night. So stay tuned for that!
Have a great week!
Photo for No Apparent Reason: 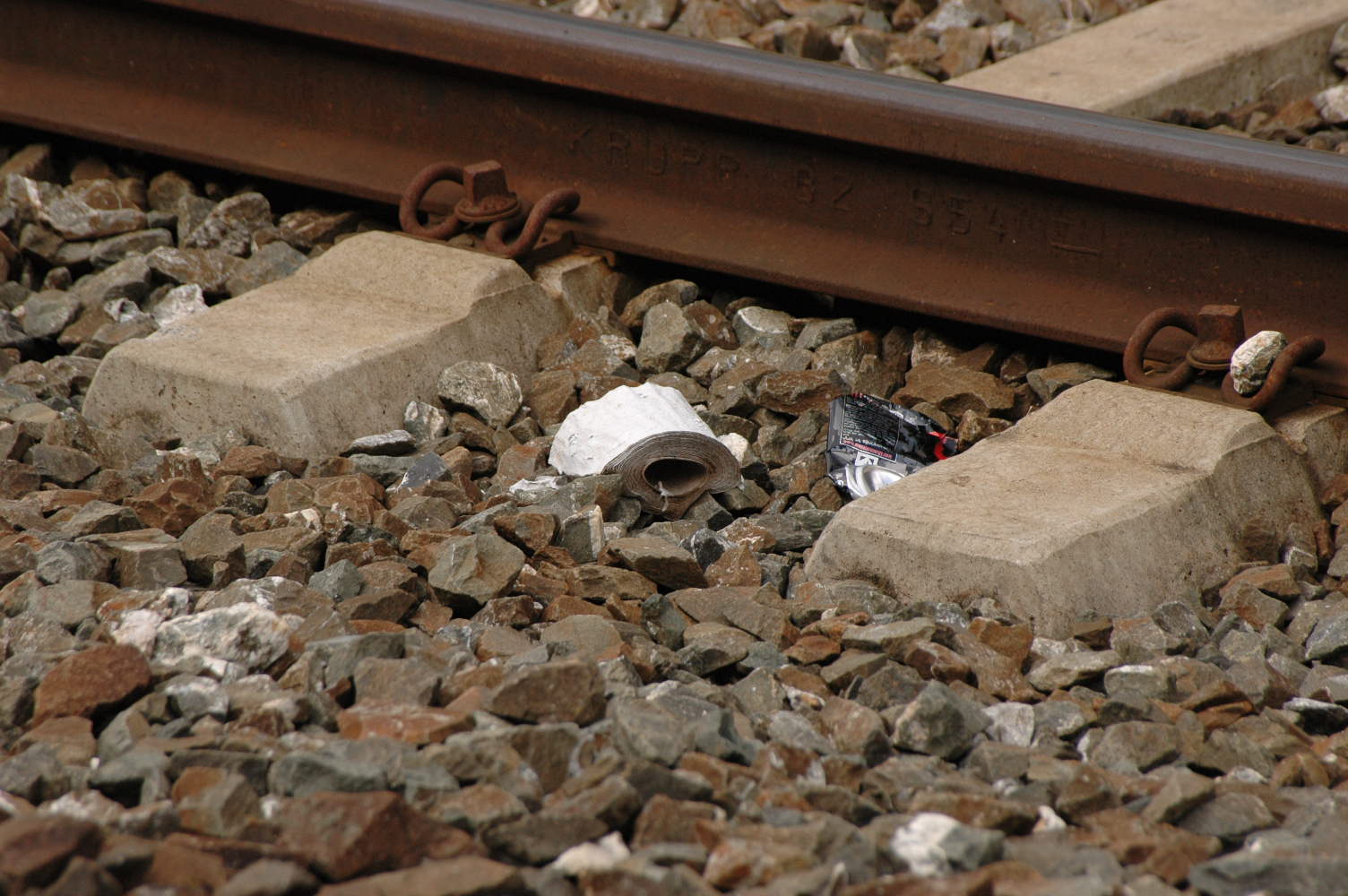