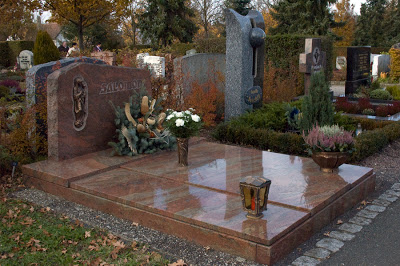 It’s November and most people in the States are gearing up for Thanksgiving. Here in Germany, of course, they don’t do Thanksgiving and it’s just another Thursday. I have the impression they think it’s a day where Americans have yet another excuse to overeat. I would say, “I wouldn’t throw stones, Germany!”

It’s certainly November: the days are short, the skies are gray and rain falls frequently. I’m not unhappy about all that at all, but it’s such a switch from the sunny, bright days I’ve had in Florida for the past 20 years.
They don’t do Halloween here much, as I stated in my last travel journal. However, the day after that, November 1, is a big holiday here. It’s All Saint’s Day wherein German families remember and honor their dead relatives. It’s quite a big to-do and very Catholic.
The way it’s done is to clean up and decorate – or pay someone to clean up and decorate – the family grave plots in the cemeteries. Then you go solemnly visit the gravesites in your Sunday go-to-meetin’ clothes.
I’ve seen it before in years past. One year when my husband was in the Army and we were stationed here, my friend Hilde asked if I would go to the cemetery on November 1 to photograph her father’s grave because she would be out of town. It sounded very odd to me at the time. But I went!
I remember how well manicured the cemetery was that day. Another interesting thing was that the graves are more elaborately built and decorated than what I’m used to seeing. Great, shiny marble slabs, plants, flowers and evergreen arrangements positioned just so. And there were many people there visiting, all dressed up.
For weeks I saw wind-proof votive candles and such in the supermarket’s seasonal aisle, but I didn’t realize it was for November 1. I figured they were Christmas decorations, since that stuff is on the shelves, too.
The most interesting item for sale in my opinion were the pallets with bags of what looked like potting soil. On closer inspection, I realized they were bags of soil for fixing up gravesites! A quick online search revealed that you can get this stuff in America, too, but I’ve never seen it, least of all in a supermarket.
Florists rack WAY up on this holiday and some offer services where they take the arrangements to the graves the day before. Cemetery caretakers do this, too. It’s a really big deal.
I learned recently that families must pay a lease on the gravesites each year. When the family dies out and there is no one to pay, they exhume the graves and cremate the remains so they can lease the plot to the next family. I guess that’s why the cemeteries always look new here. The really old graves are people interred in the churches themselves.
There are tombs beneath your feet in most churches here. If you look down you can see that the stone slabs of the flooring are about the size of a grave and many are etched with names. Some bodies are in wall tombs and are elaborately marked and sculpted. Bodies inside churches belonged to families of very high socio-economic rank or were famous for something.
I asked Hilde and Adi if I could go with them to the cemetery this year to make some photographs. I don’t want to be morbid, but I want to give you an idea of what a German cemetery looks like and how they do things on November 1.
Hilde’s parents’ grave:

She told me this was a plot for four and that she and Adi would be buried here. I found out from this conversation that they are allowed to stack the caskets two deep in Germany, but no more.
Hilde’s son-in-law’s father’s grave: 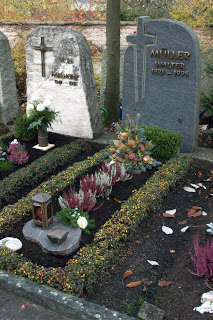 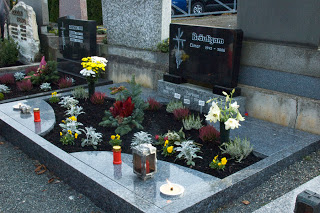 We visited two local cemeteries that day because Hilde has close relatives buried in both places. The second one we came to had a church service going on as we approached: 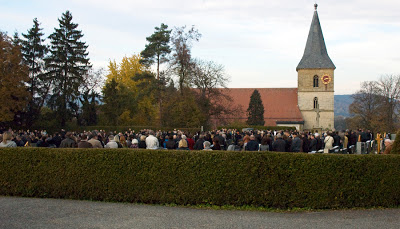 So back to the land of the living! I shot this of Hilde and Adi walking among the autumn trees. I liked the fall colors and the subdued lighting: 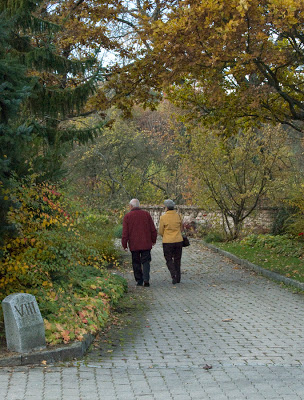 It seems we must remember our dead before we get on with the holidays. Last weekend was Germany’s equivalent of Veteran’s Day, so there was a small parade passing in front of my place on Sunday morning. It was led, of course, by the local marching band: 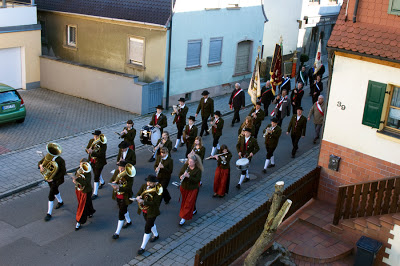 Later that day I hopped a bus into Bamberg just to get out of the apartment for a while. The weather had warmed up enough to sit at a sidewalk café and watch the people.
I can definitely see signs that Christmas is coming! The town is gearing up for the opening of the Christmas markets. You can see a string of lights here, a wooden stall there: 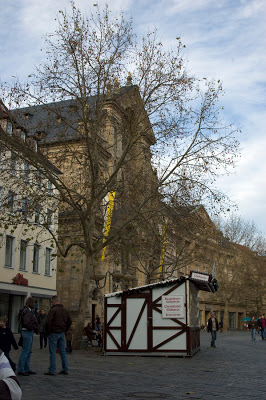 And the roasted chestnut vendor has been in place for a few weeks now: 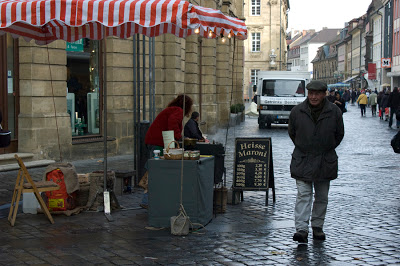 So stay tuned for the pictures of the Christmas markets!
Photo for No Apparent Reason: 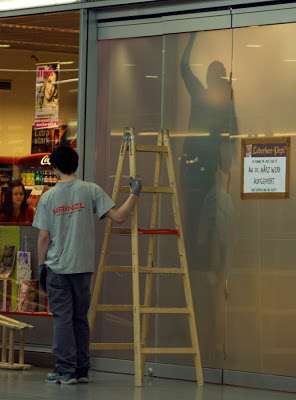 I call it, “Let me hold the ladder for you.” I shot this in the Linz, Austria, train station earlier this year. Talk about being in the right place at the right time!

1 thought on “Honoring the Dead in Germany”