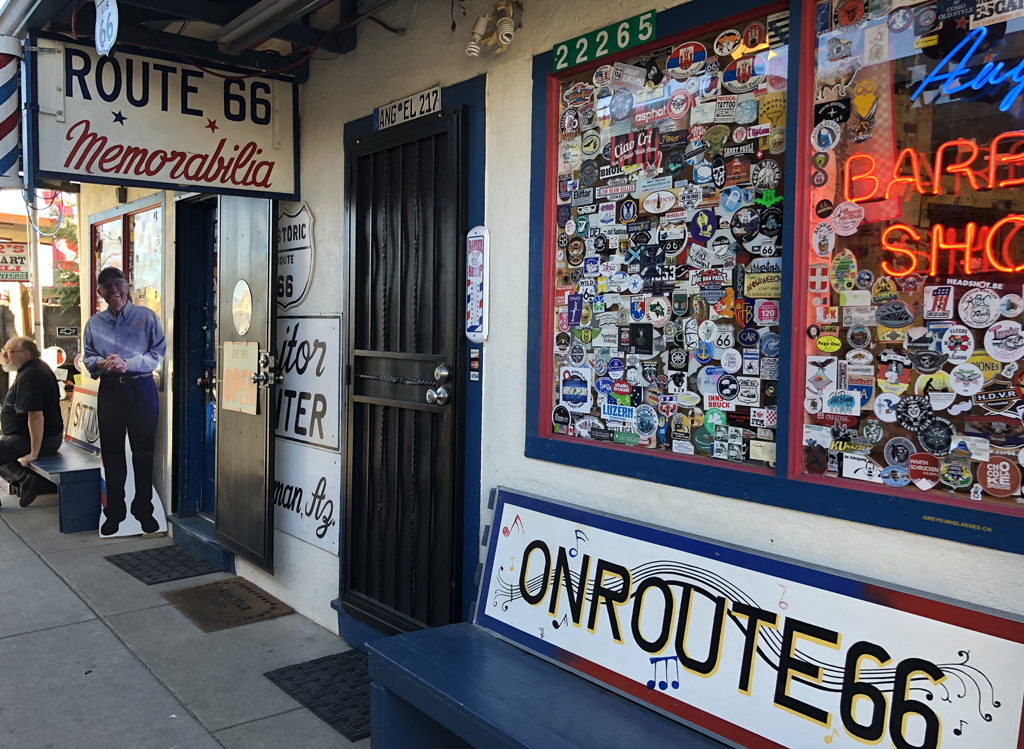 Last week I described my first trip to the Grand Canyon. Well, on the drive from Vegas to the Canyon, my husband and I passed through Kingman, Arizona, which is mentioned in the song (which is now in your head), “Get Your Kicks on Route 66”. A few miles down the road, we stopped at a small town called Seligman in Arizona. There, we visited the famed Angel and Vilma’s Original Route 66 Gift Shop. Seligman lies on the original 66 route, which, at that point, is parallel to I-40, the interstate that killed 66.

Here’s the front of the gift shop – that cardboard cutout is Angel himself:

The place is chock-full of memorabilia! 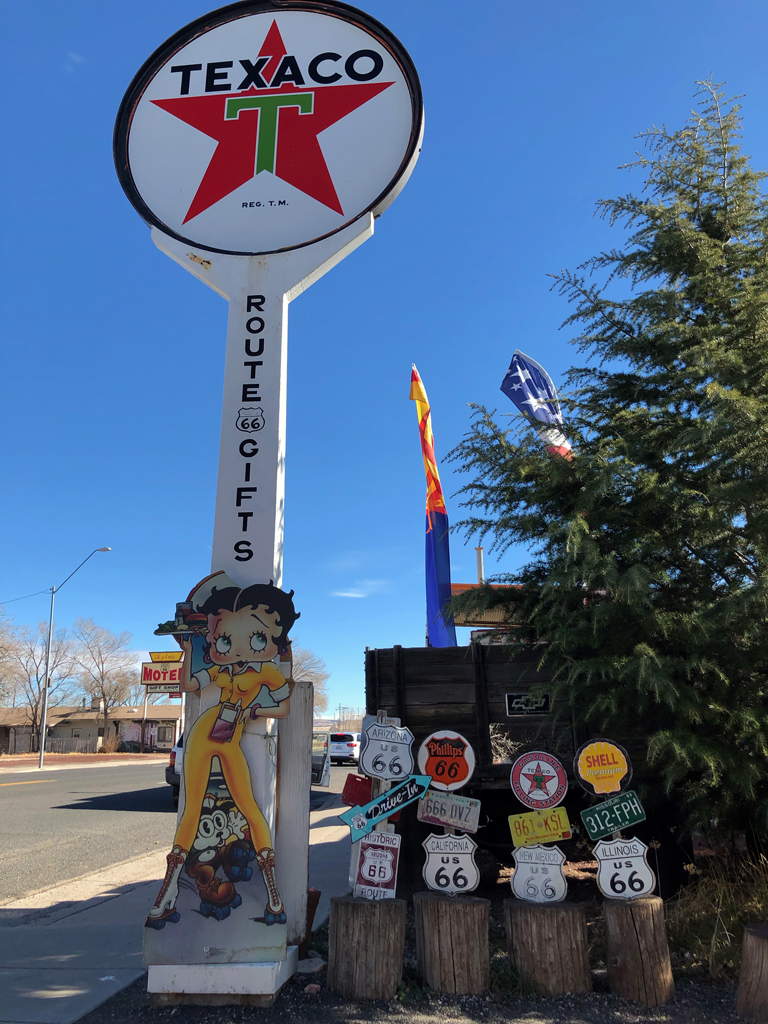 In case you are a youngster or just don’t know, Route 66 was a US highway that stretched from Chicago to Los Angeles, passing through eight states. It was commissioned in 1926. It was the fastest way to drive across the western United States until the interstate system replaced it. You can see a map of it in the flag on the building in the photo below: 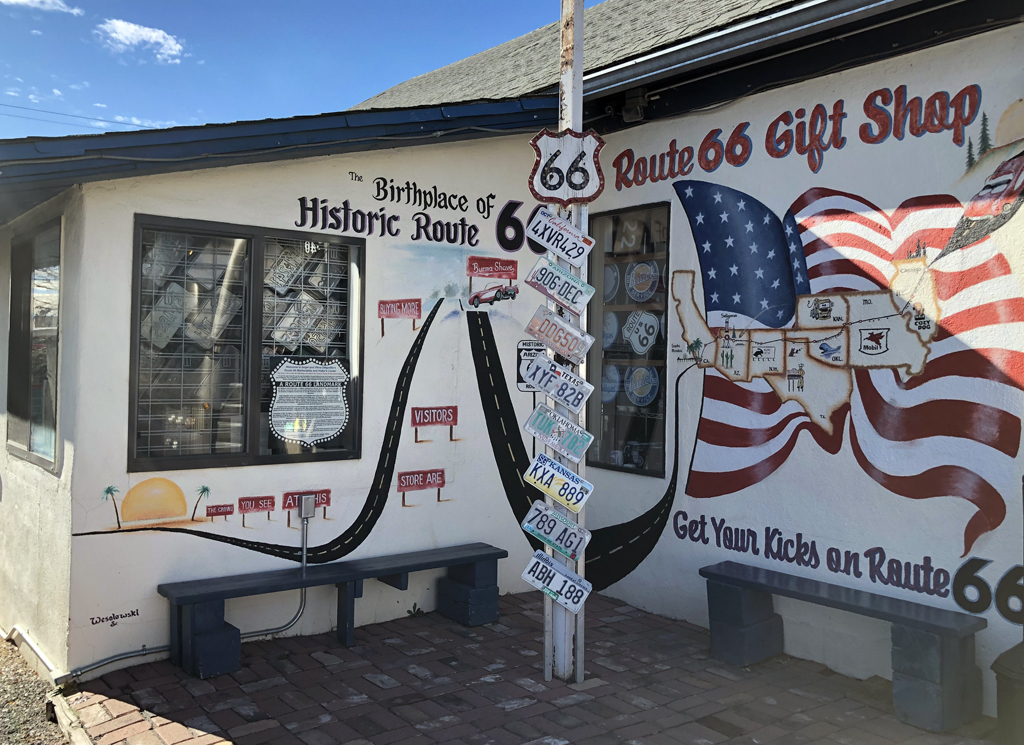 FYI, you can find more details about the history of Route 66 on my podcast website for English learners. I did an episode about it for that site.

Anyway, Angel Delgadillo was a barber and this was his barbershop back in the day. When 66 was decommissioned in 1978, his business dried up, along with Seligman itself. He ended up dedicating his life to the movement to preserve the historical highway. His barber shop became a souvenir shop, and he donated proceeds to the cause for about 10 years. Today it looks like this inside: 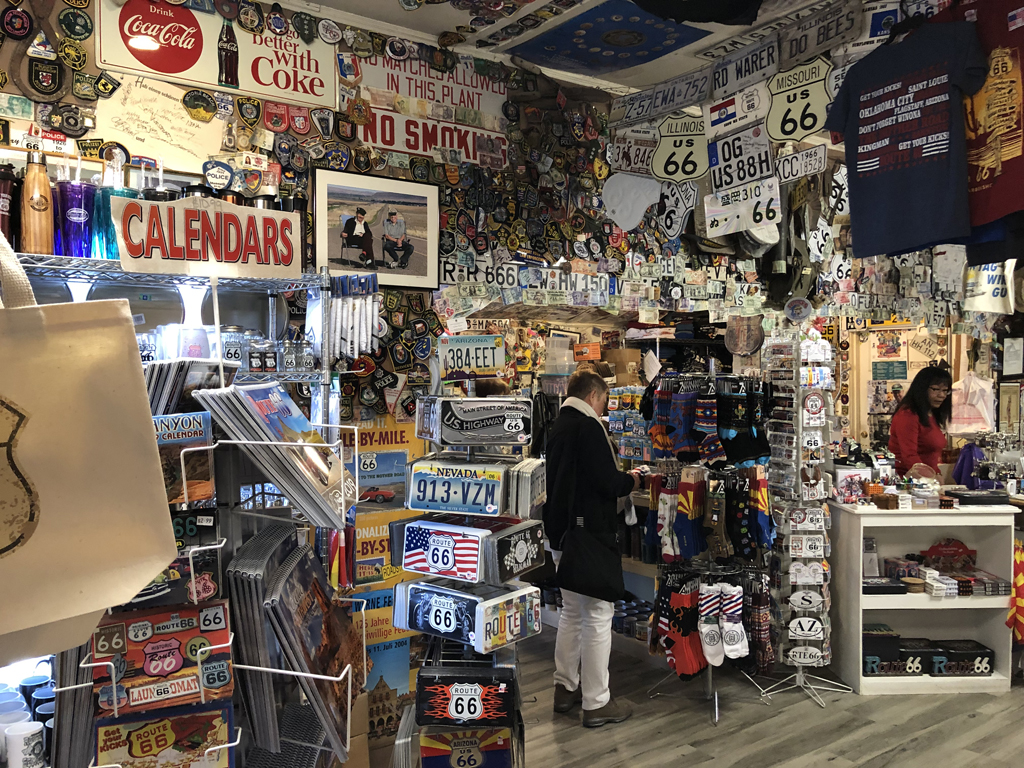 It was so fun to see the huge number of artifacts and visitor gifts lining the walls and ceiling. We left a signed dollar on the ceiling for the collection, too. 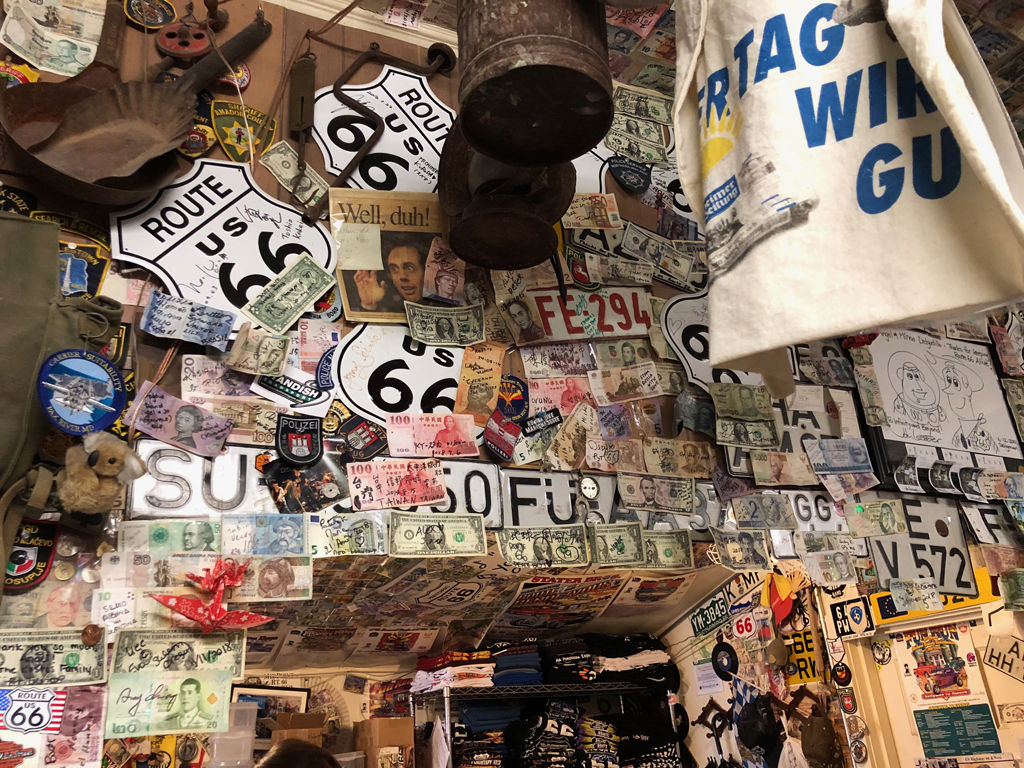 In the photo below, you can see a drawing of Buzz Lightyear and Woody done and signed by John Lasseter, the director of Cars. Many other celebrities have visited and left autographs here, too. 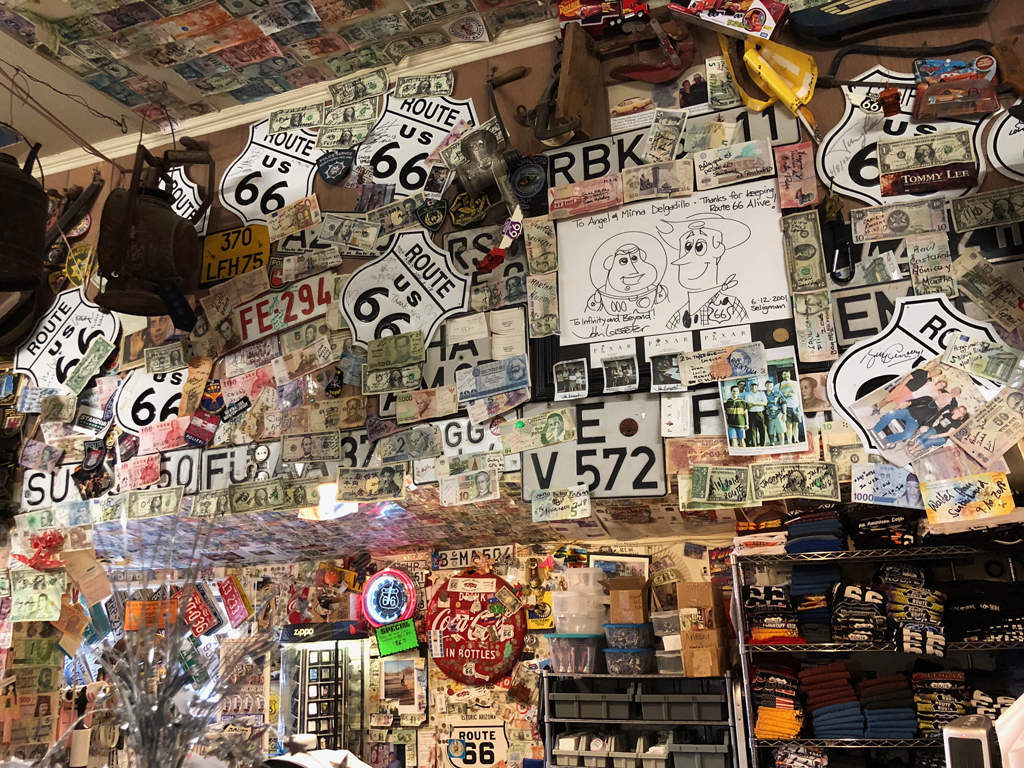 Even Angel’s barber chair is preserved here. Notice the Burma Shave sign on the right. We’ll talk about that Tow Mater in a moment: 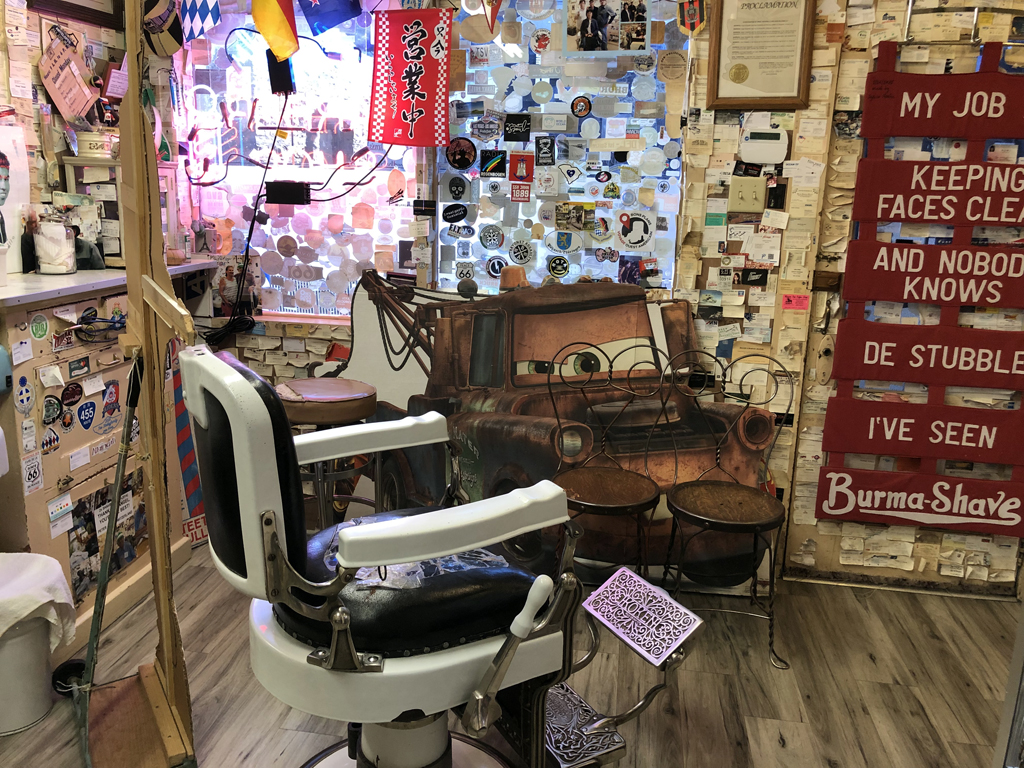 Today, the shop is run by Angel’s daughters and son-in-law, Mauricio, who greeted us like he’d been expecting us for days: 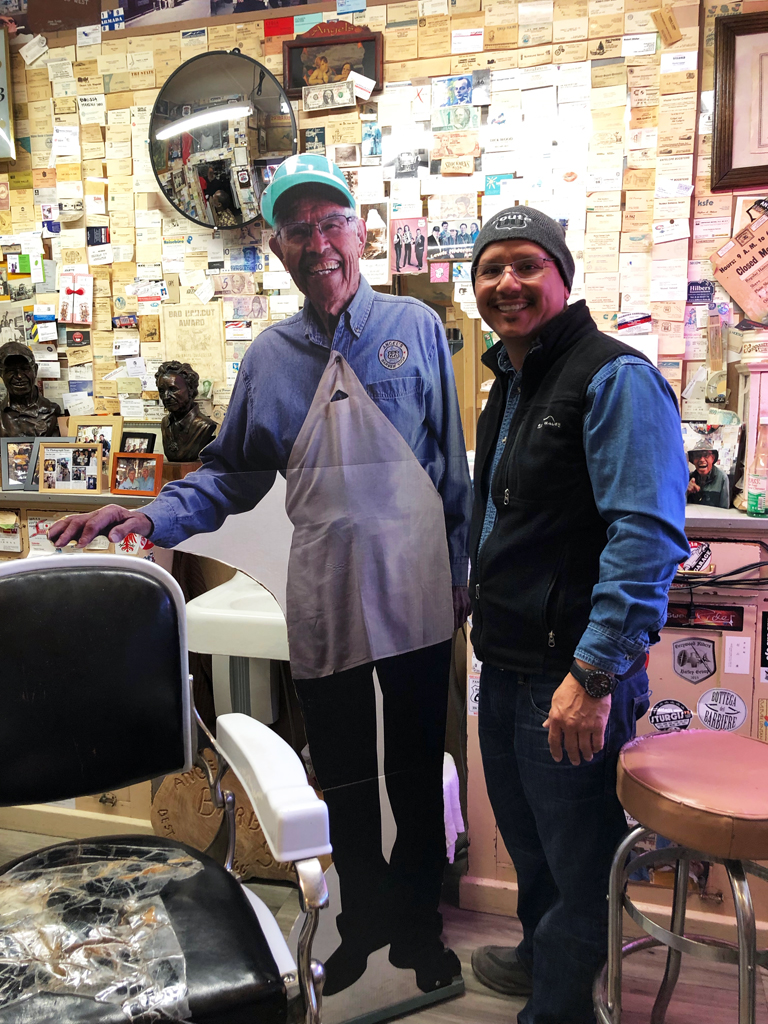 He filled us in on the history, namely, Angel got other businesses along the decommissioned 66 to form the Historic Route 66 Association of Arizona. That group lobbied and lettered until, in 1987, Arizona officially designated the old highway historic. This all means it was able to be preserved, and a long stretch of it still exists because of this effort. In fact, all eight states now have similar associations and preserved sections of 66. Plus, state and federal funds have been allocated for the Mother Road’s preservation. There is a much more detailed account of this on their website. Give it a read!

The souvenir shop has every shape of 66 souvenir imaginable: 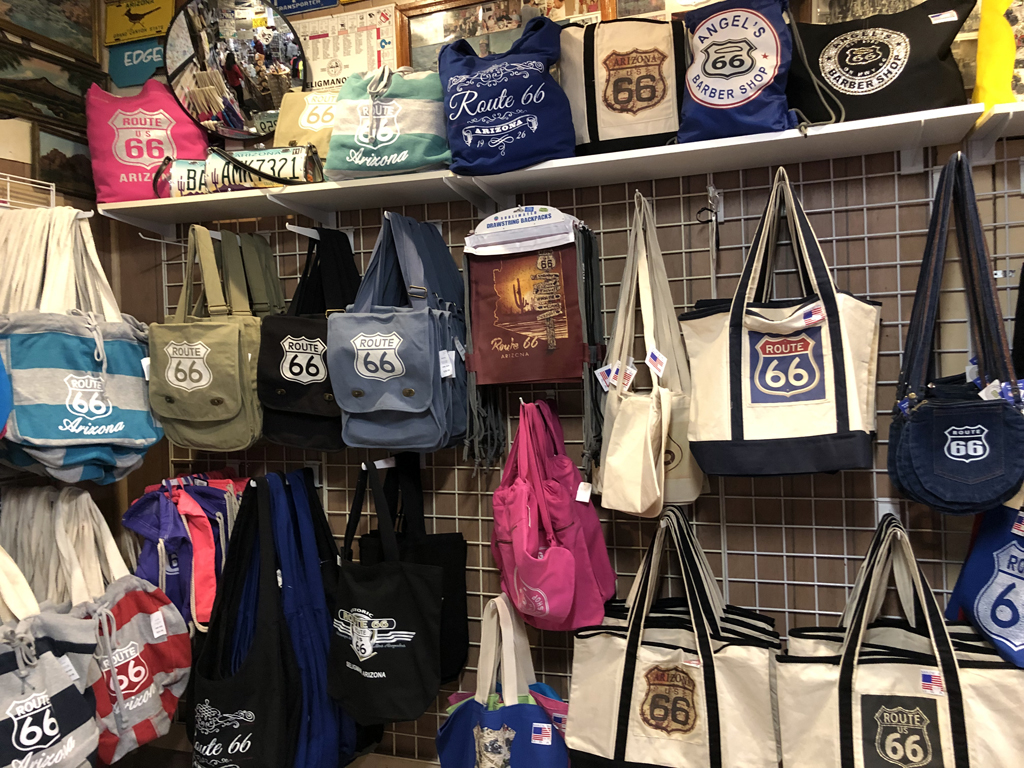 I, of course, bought a pin for my collection: 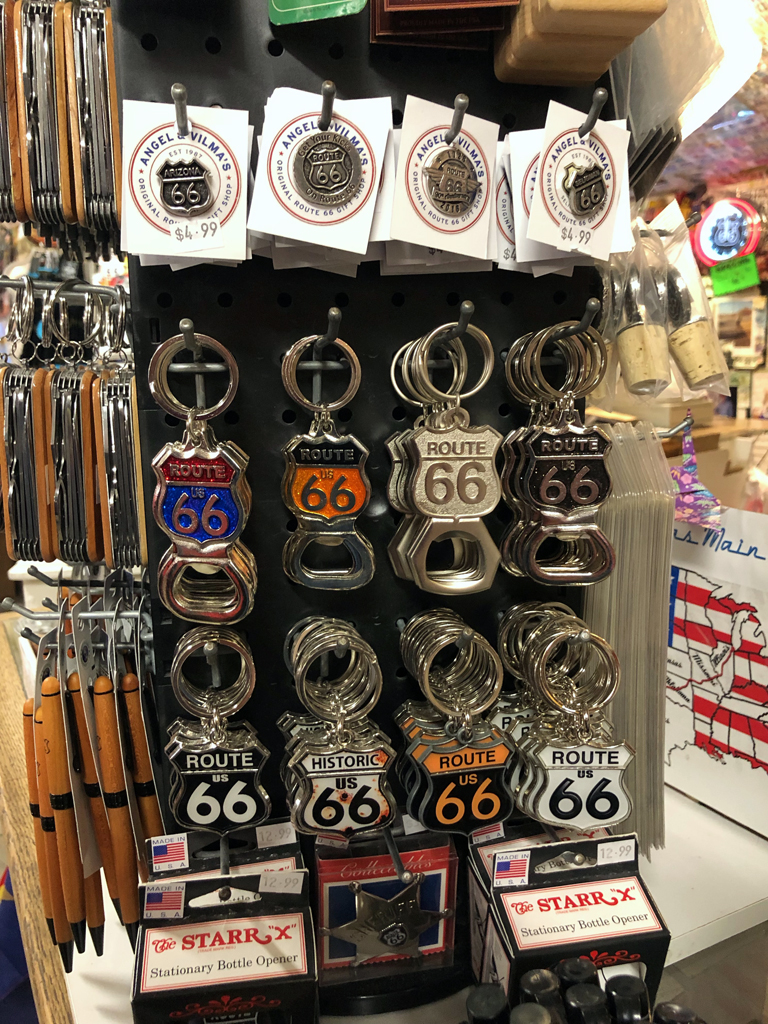 While we were there, there was a giant tour bus parked right in front of the souvenir shop. I was silently complaining about not being able to get a good picture because of it. But my husband, true to form, started chatting up the bus driver, who turned out to be a tour guide, too. He told us more of the history that Mauricio had begun, and also told us that the town of Radiator Springs in the Pixar movie Cars was modeled after Seligman! (Remember Tow Mater and Lasseter’s autograph?) In fact, there was a teepee motel on the edge of town, though not the most famous one. He also mentioned that the old cars sitting around the place – and there were lots of them, were the cars Pixar used to create the movie characters. While I personally believe that Pixar combined features of many Rt. 66 towns to create Radiator Springs, I could definitely see specific points and cars that they’d used directly.

Angel’s brother founded and owns the Snow Cap Drive In next to the souvenir shop, which is an old-school drive in serving hot dogs and ice cream. Unfortunately it was closed the day we stopped, but here are some photos that capture the spirit of the place and its owner: 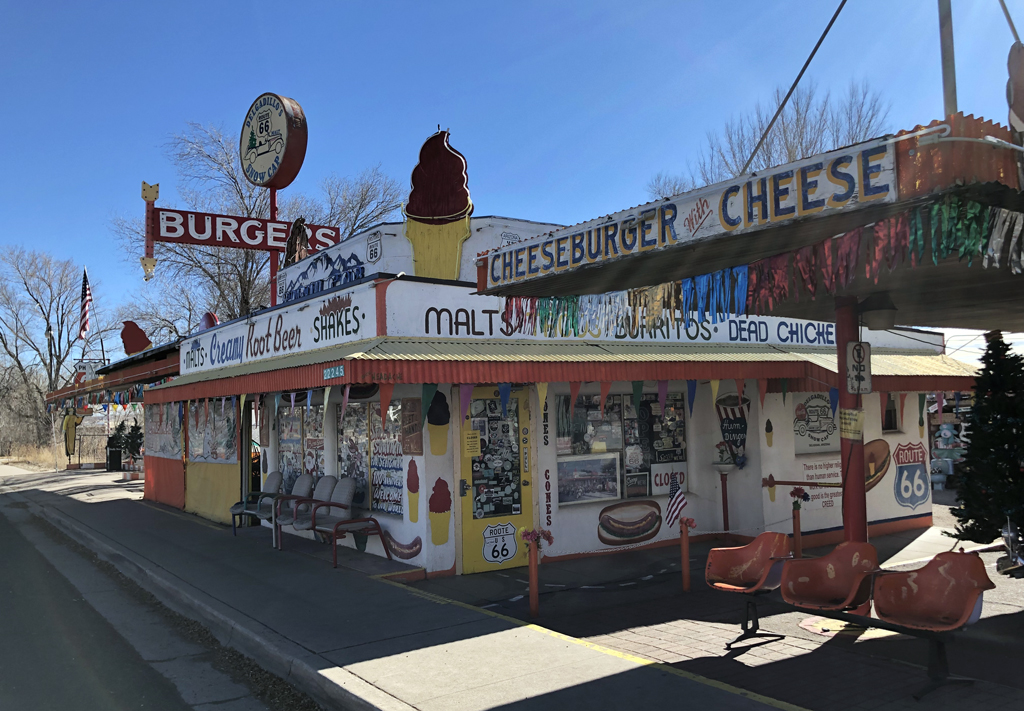 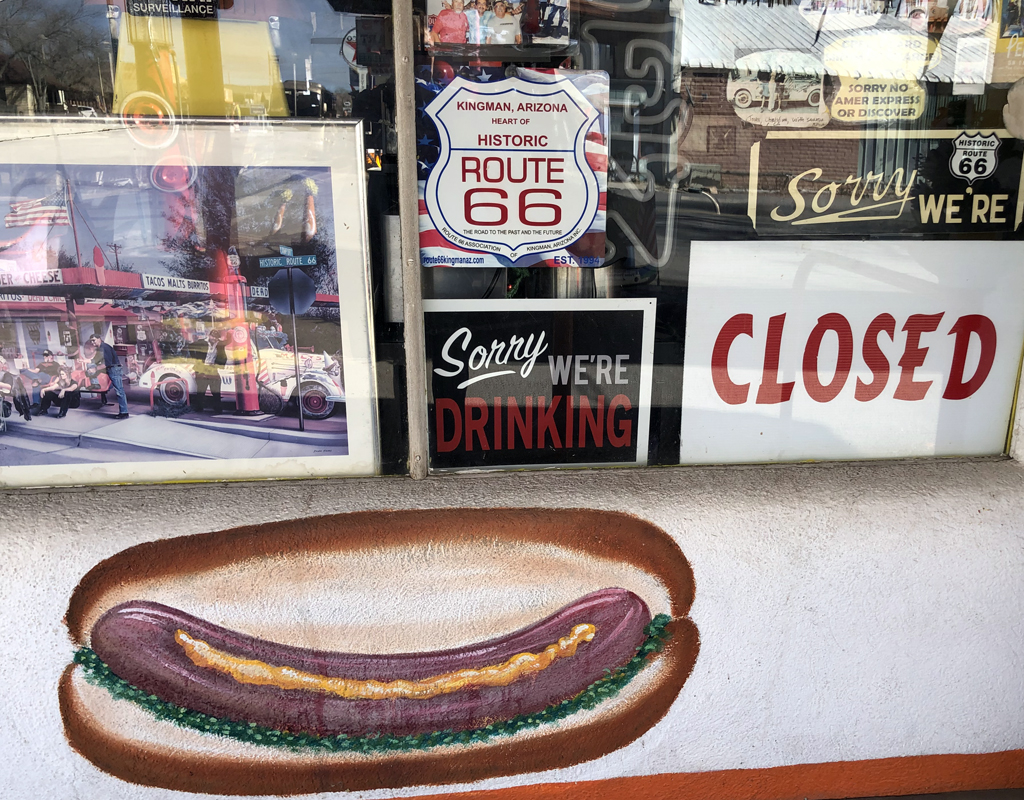 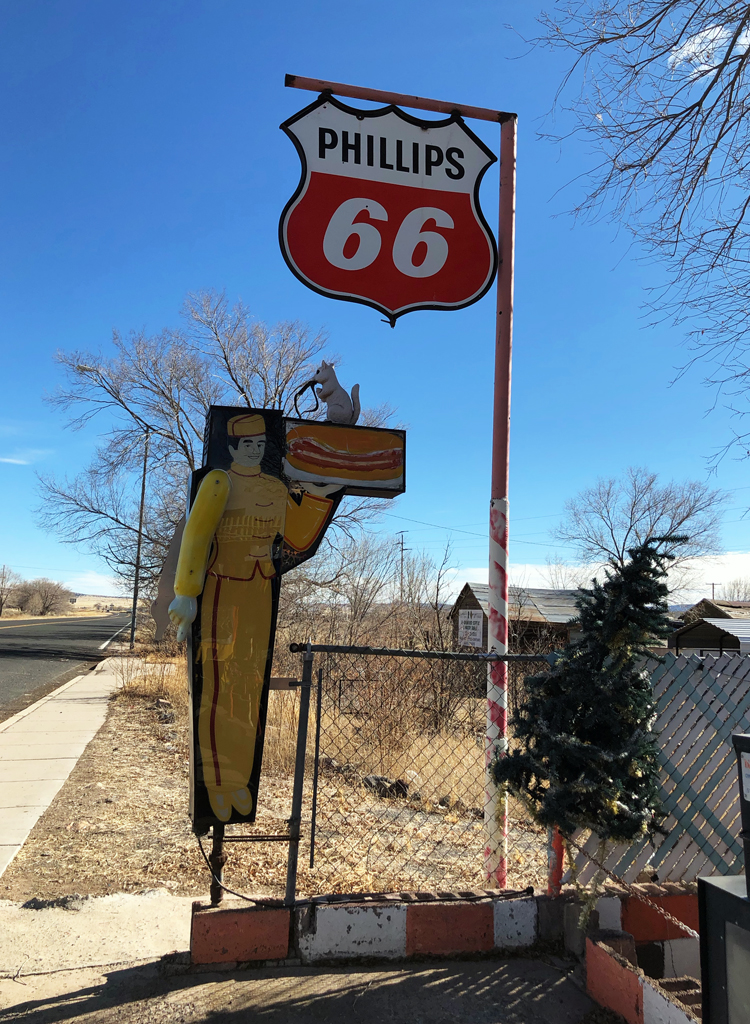 Out back were some old autos that look suspiciously like Cars cars: 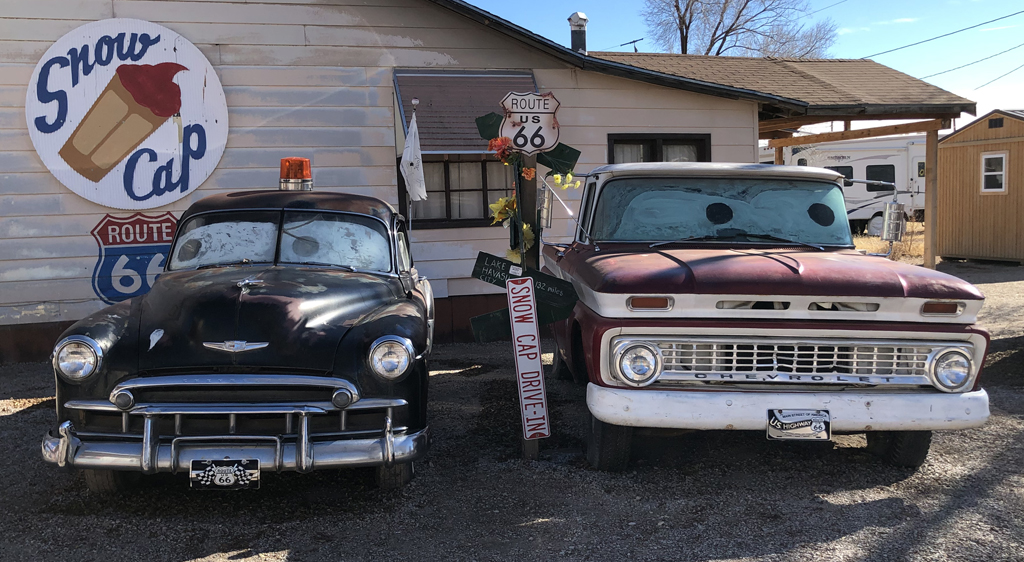 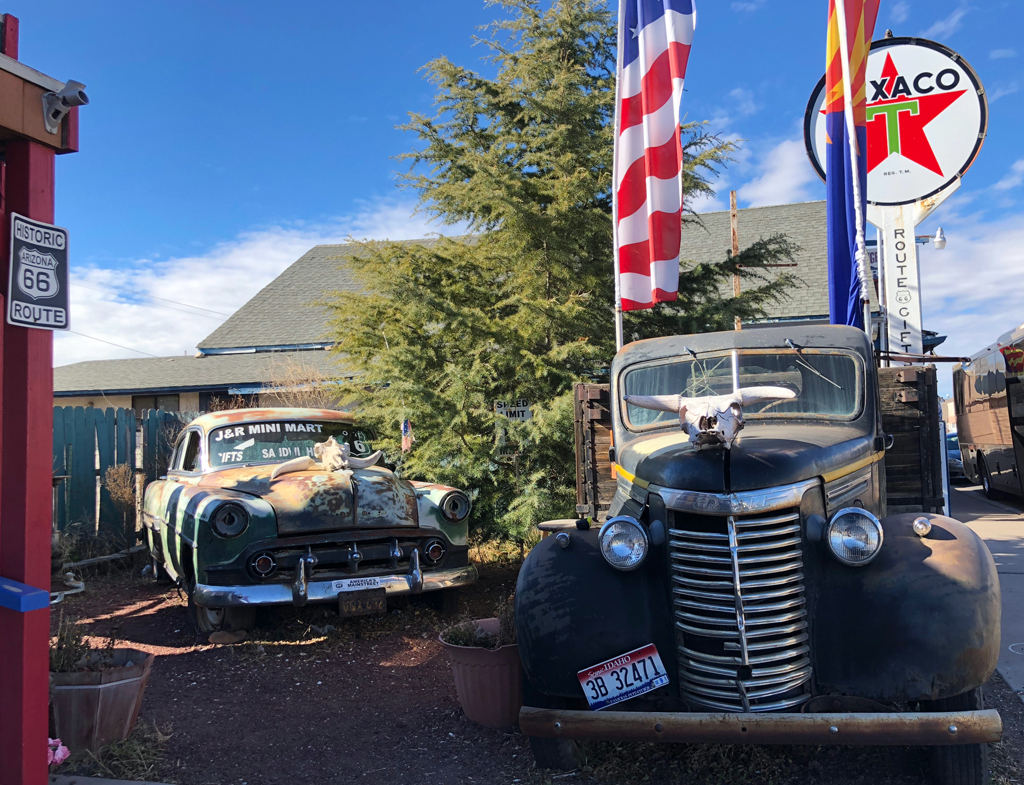 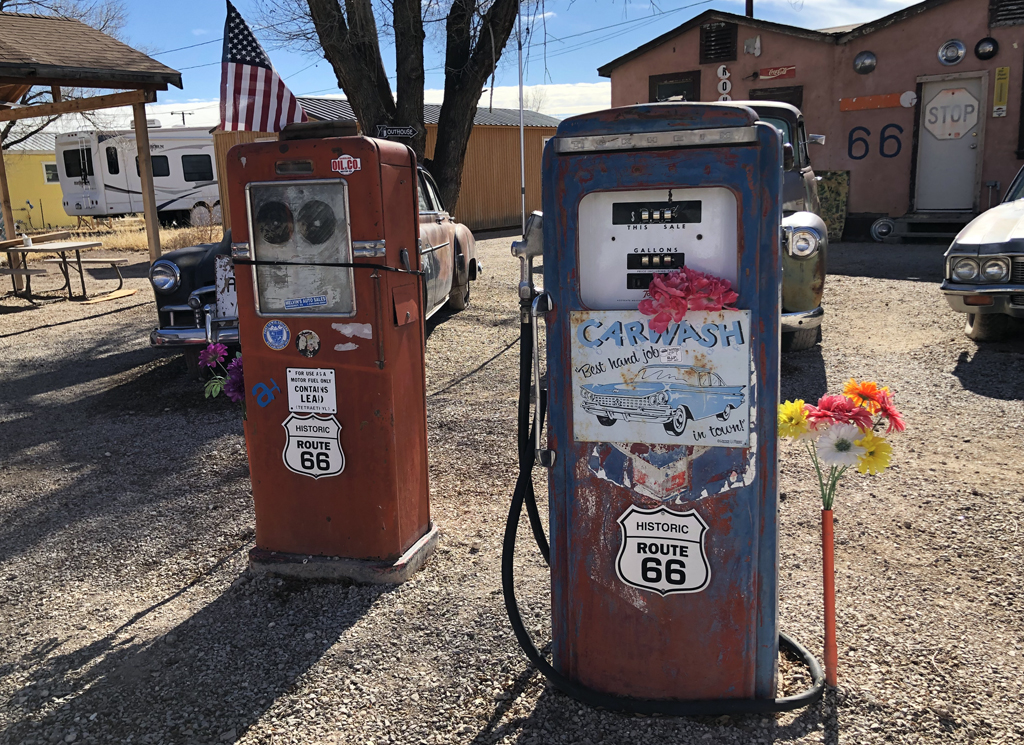 Angel, who is over 90 years old now, is still around, so I heard, and rides his bike around town, talking to people and basically smiling and being happy. I wish I’d met him. And I truly wish we’d had more time to explore Seligman. There is a diner called Roadkill Cafe and other places I’d have liked to visit. But you can get the feel of the town from these pix, and it was a delightful stop along our trip. Next time through I’ll travel the preserved segment of Route 66, which extends for several miles, and I hope it’s in my Mini! 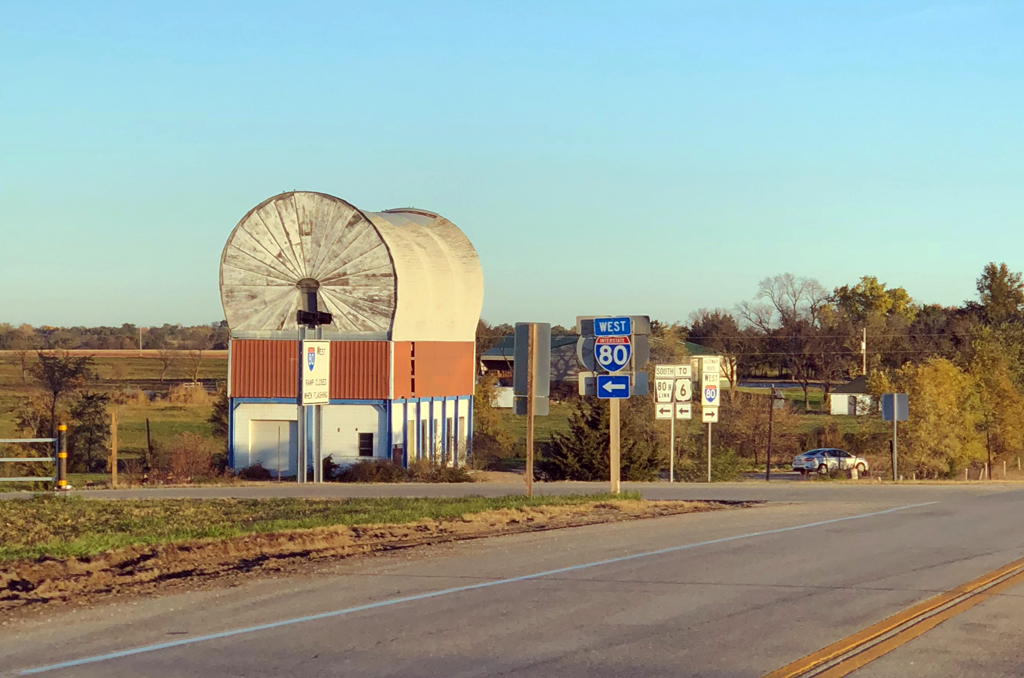 3 thoughts on “Get Your Kicks on Route 66 in Seligman, Arizona”