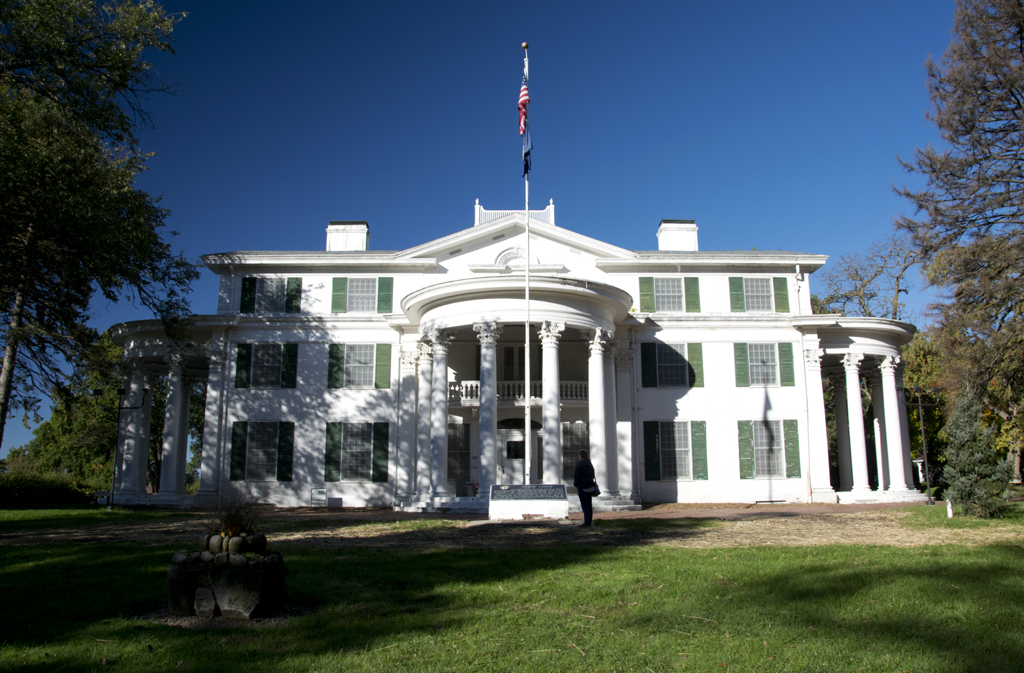 Back in October I visited Lincoln, Nebraska, and environs while accompanying my husband on a business trip. You’ve seen mention of that trip in my Paper Airplane Sculpture post and Lee’s Chicken Restaurant post. On that trip, my husband’s colleague’s wife, and now my friend, suggested we visit the Morton Mansion in Nebraska City, which I’d never even heard of. She grew up in this region and had visited the place as a child, but not since.

The direct sunlight in the above photo masks how shabby the building looks on the outside: the paint was peeling and the structure was a little rundown. However, I’m happy to know it is slated for a complete refurbishment very soon. In fact, we saw evidence of it during our visit.

The man who had this home built was J. Sterling Morton (1832-1902). Born in New York state and a graduate of the University of Michigan, J. Sterling set out for the then-Nebraska Territory on the day he wed his wife, Carrie, in 1854. Here’s their wedding photo: 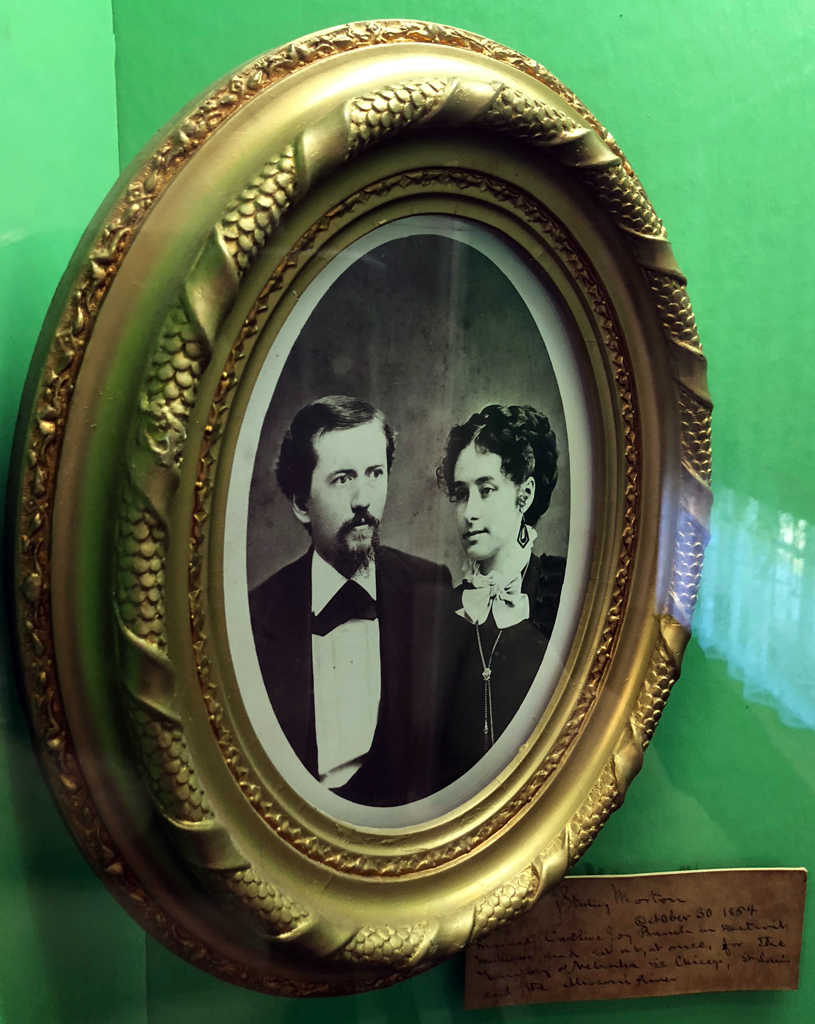 J. Sterling was to accomplish great things during his life. At first he became editor of the local newspaper and quickly entered politics. Up til that time, the Great Plains had been considered a barren desert. In fact, I saw a picture of Lincoln, NE, that showed the original settlement. There was not a tree in it! Trees are NOT native to the Plains, just lots of drought-tolerant grasses.

Morton was appointed the territory’s Secretary of State and then the acting territorial governor from 1858-1859. You can tell he hobnobbed with the big names of the day. There are placards all around the mansion stating “who slept here”, including former presidents and first ladies, as well as present and previous Cabinet members. The deed to the land is framed and hung on the wall, signed by President Buchanan.

Around 1858-ish, he and Carrie moved out of their original log cabin and into a frame house they’d had built. The frame house is the original structure that became the mansion. However, it wasn’t until their son Joy inherited the frame house that it became a mansion. Joy increased his father’s interest in a salt company that became Morton Salt. Joy had additions done periodically until it acquired the 52 rooms it has today. It was the family summer retreat until they donated it to the State of Nebraska in 1923.

But I’m getting ahead of the story.

Nebraska became a state in 1867. From 1867 – 1882, J. Sterling left politics to focus on promoting agriculture. He recognized that the land was fertile and could be put to good use. Plus he was passionate about planting trees, maybe because he’d grown up in New York and Michigan and missed them. In any case, he served on the Nebraska State Board of Agriculture and the state’s Horticultural Society. In fact, he was so gung-ho about planting trees that he was responsible for the first Arbor Day, which was in Nebraska in 1872. Of course, you know that Arbor Day is a thing in every state nowadays, largely because of Morton. The date of Arbor Day varies by state, depending on the best time to plant trees in each particular state. Nebraska’s is the last Friday of every April.

Now you know why the place is called Arbor Lodge. In fact, the building and grounds comprise the Arbor Lodge State Historical Park.

So here is the lobby of the mansion with its grand staircase: 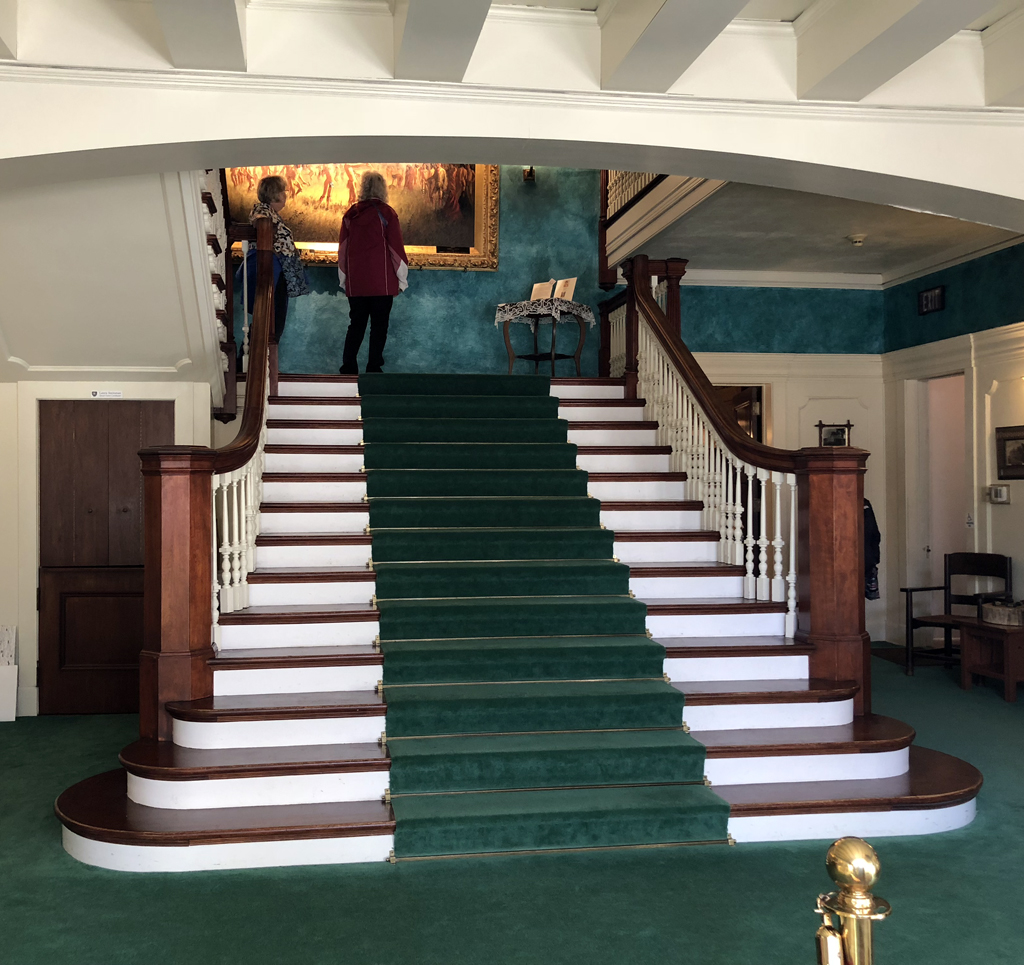 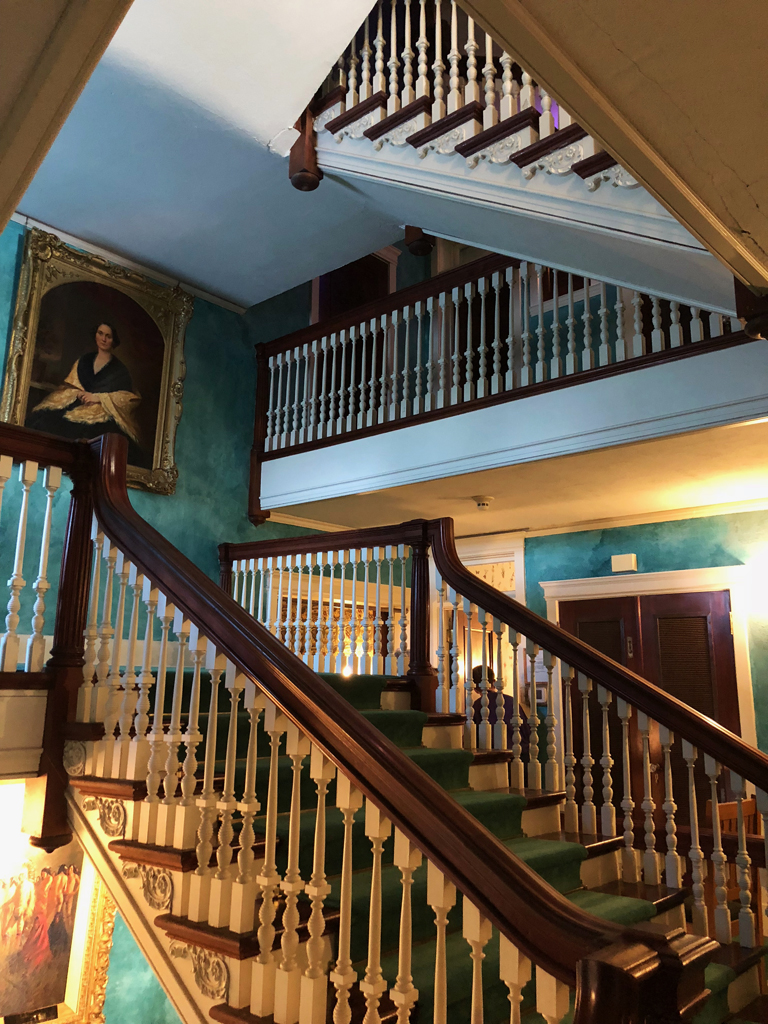 In this shot you can see the reception area where you buy tickets and buy souvenirs. The attendants were dressed in period costumes and were extremely friendly and helpful. 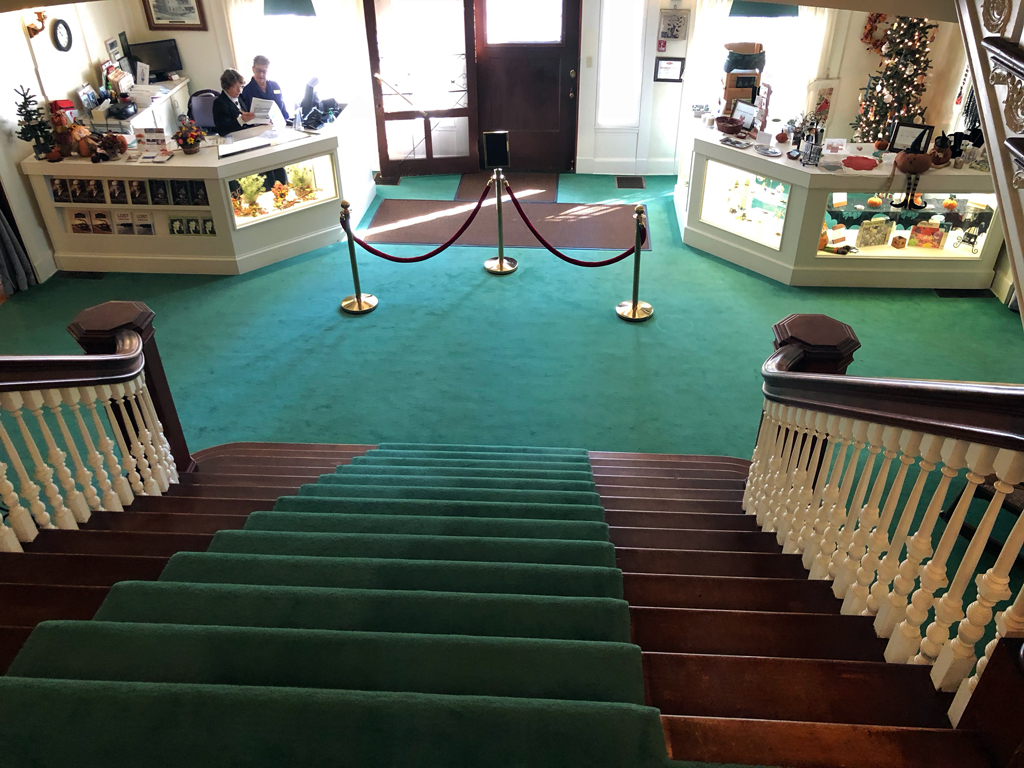 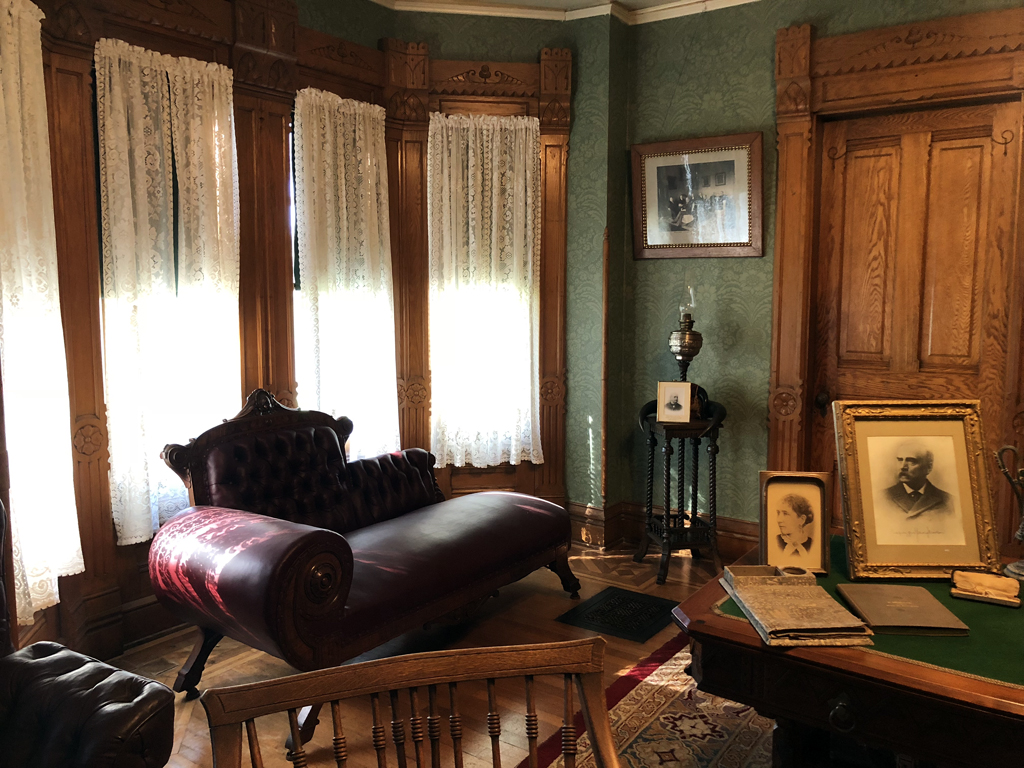 Dining room, which  made me want to cook Thanksgiving dinner for 37: 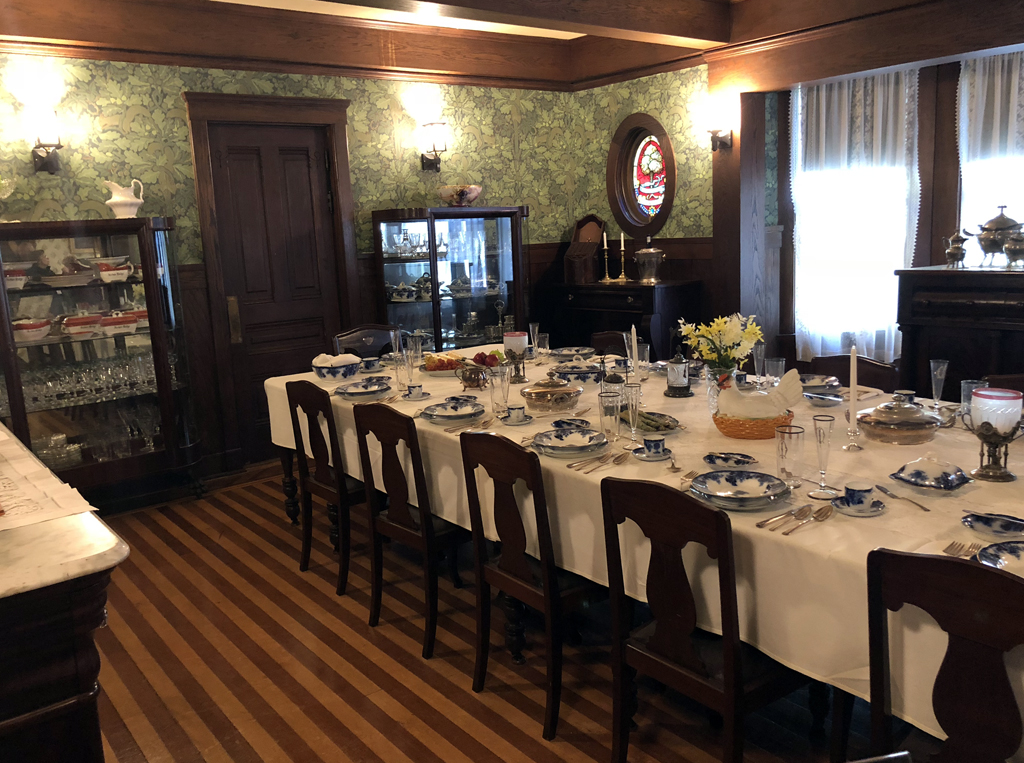 They even had their own dishes: 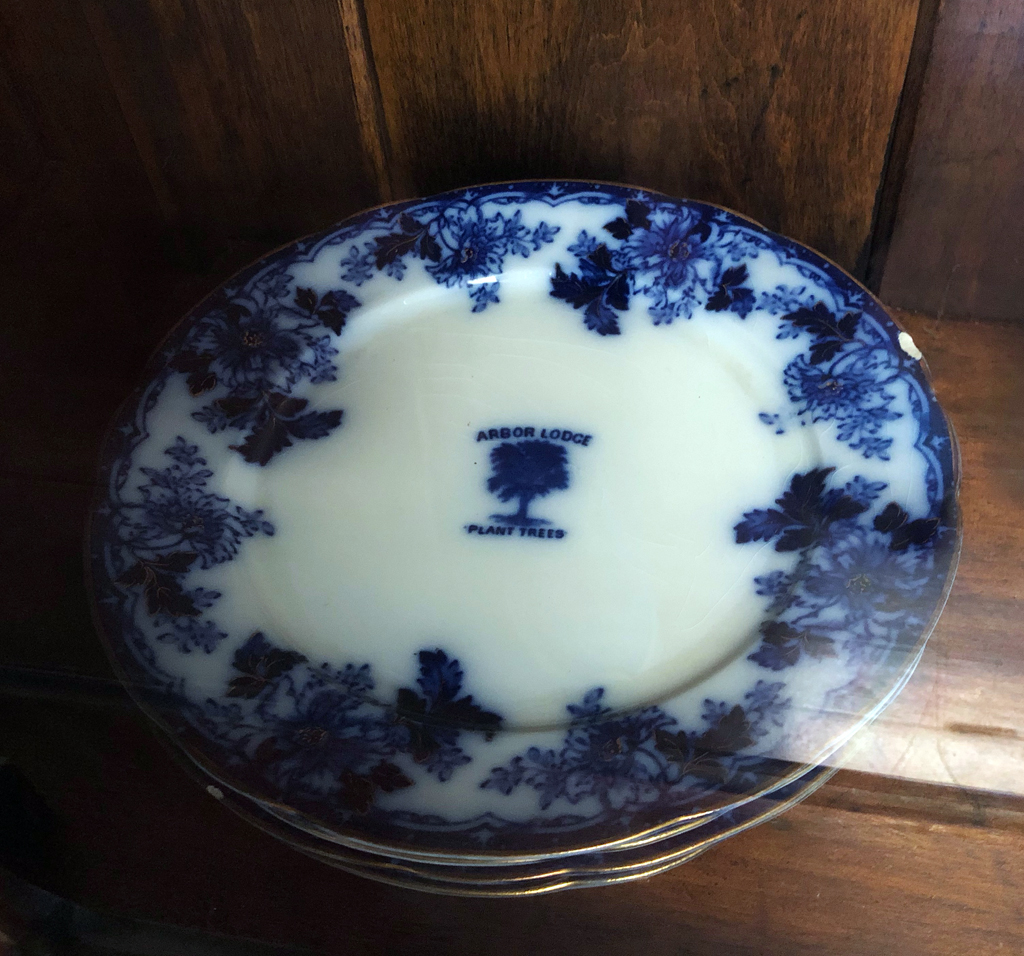 Sunroom with Tiffany glass ceiling (the chairs are facing a TV where we saw a historical video): 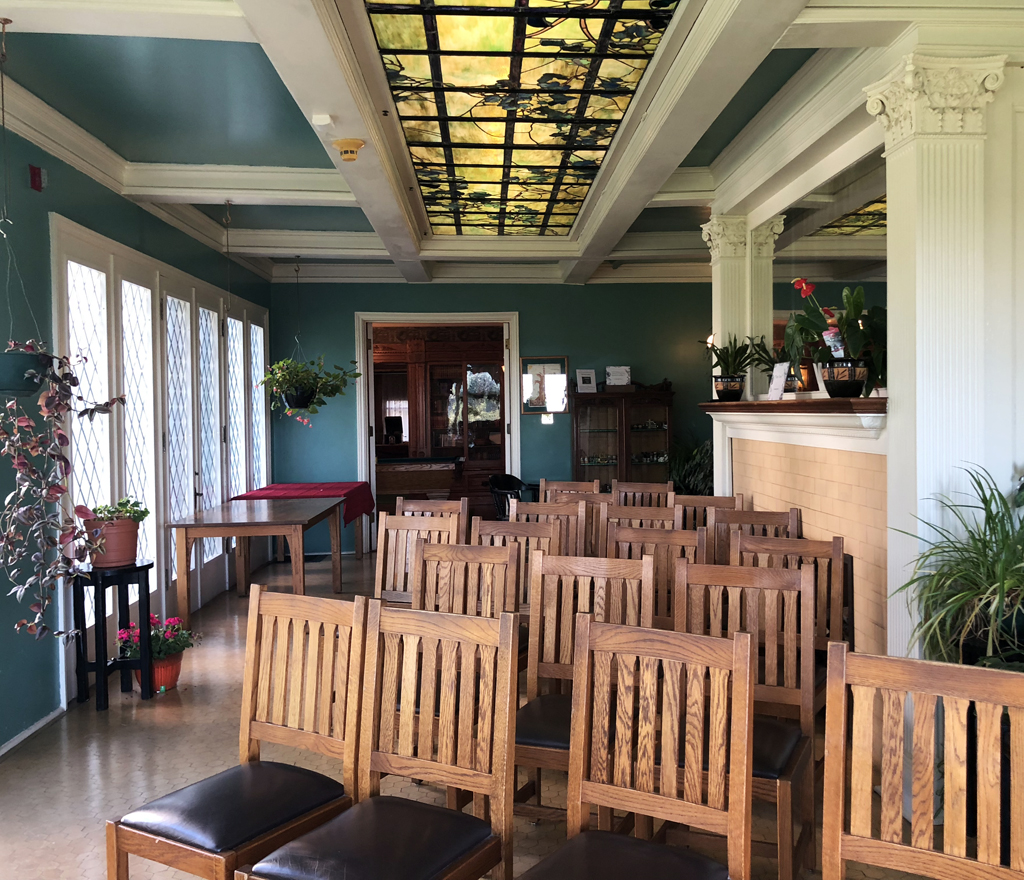 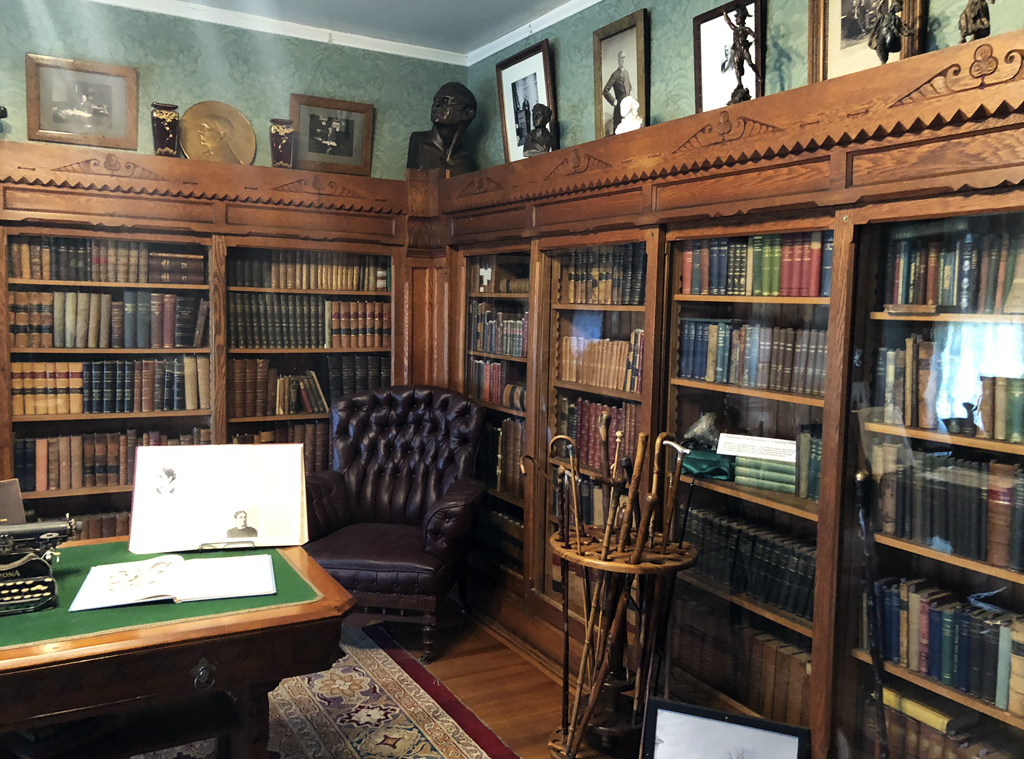 If I remember right, the mirror in the shot below is from Paris (?) and is backed by pure silver. 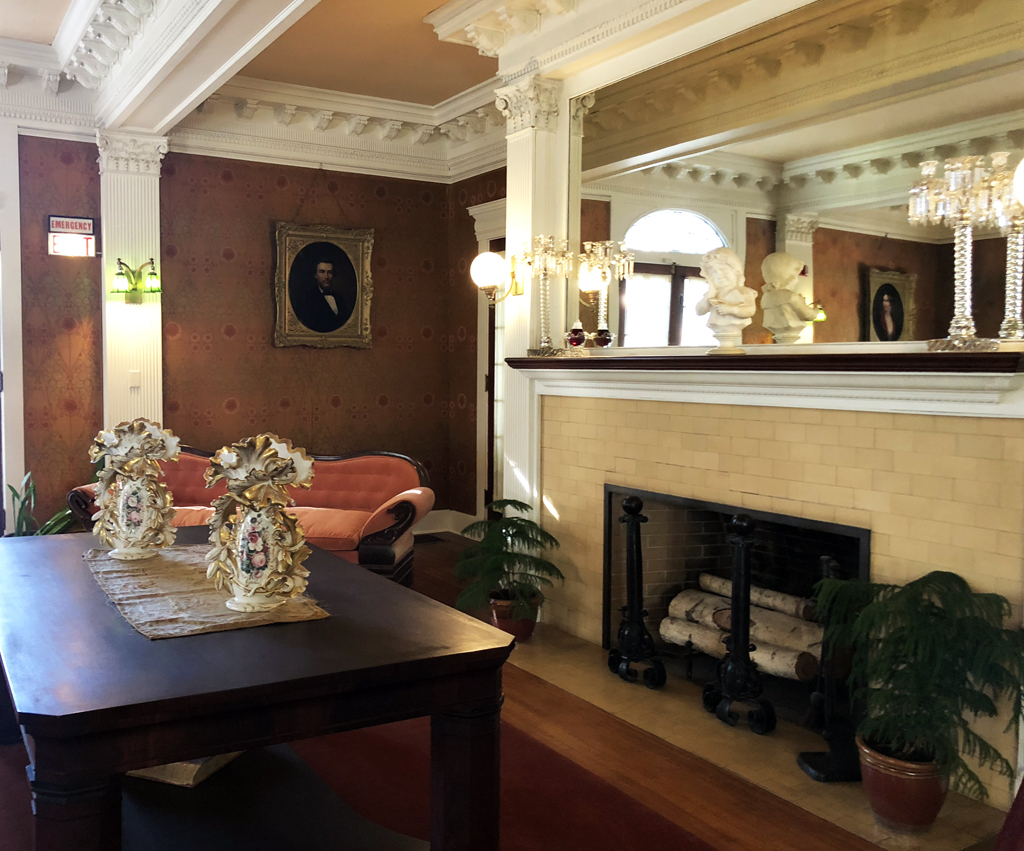 I surmise that this room was for the gents and cigars back in the day: 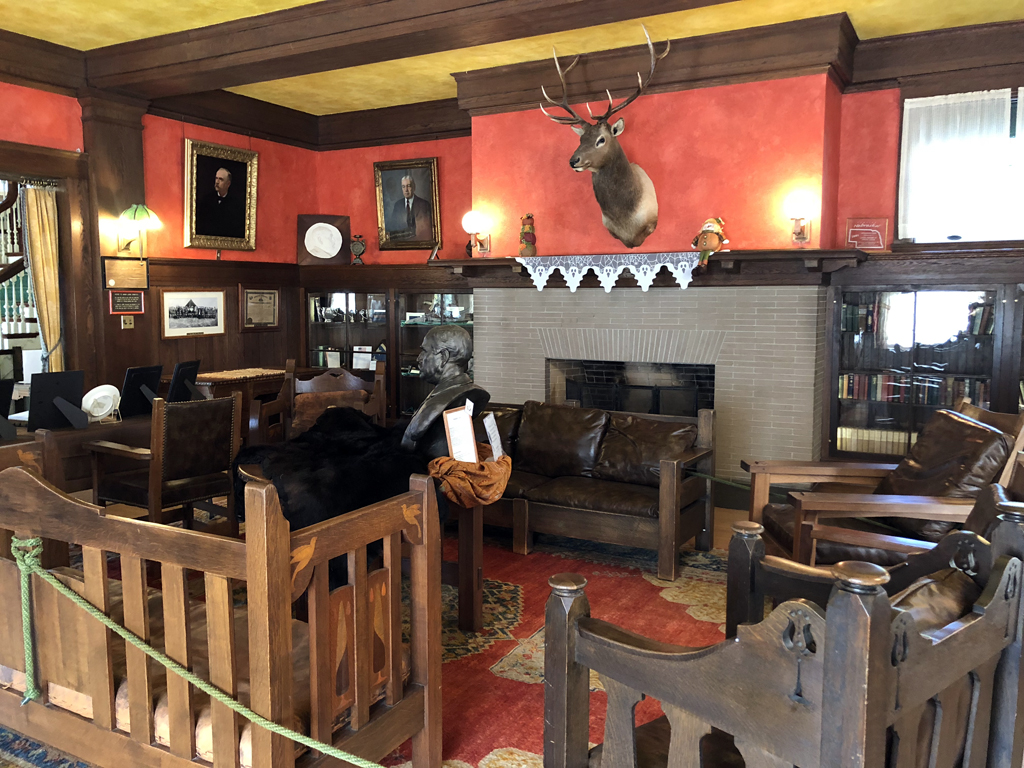 And possibly the ladies retired to the sitting room: 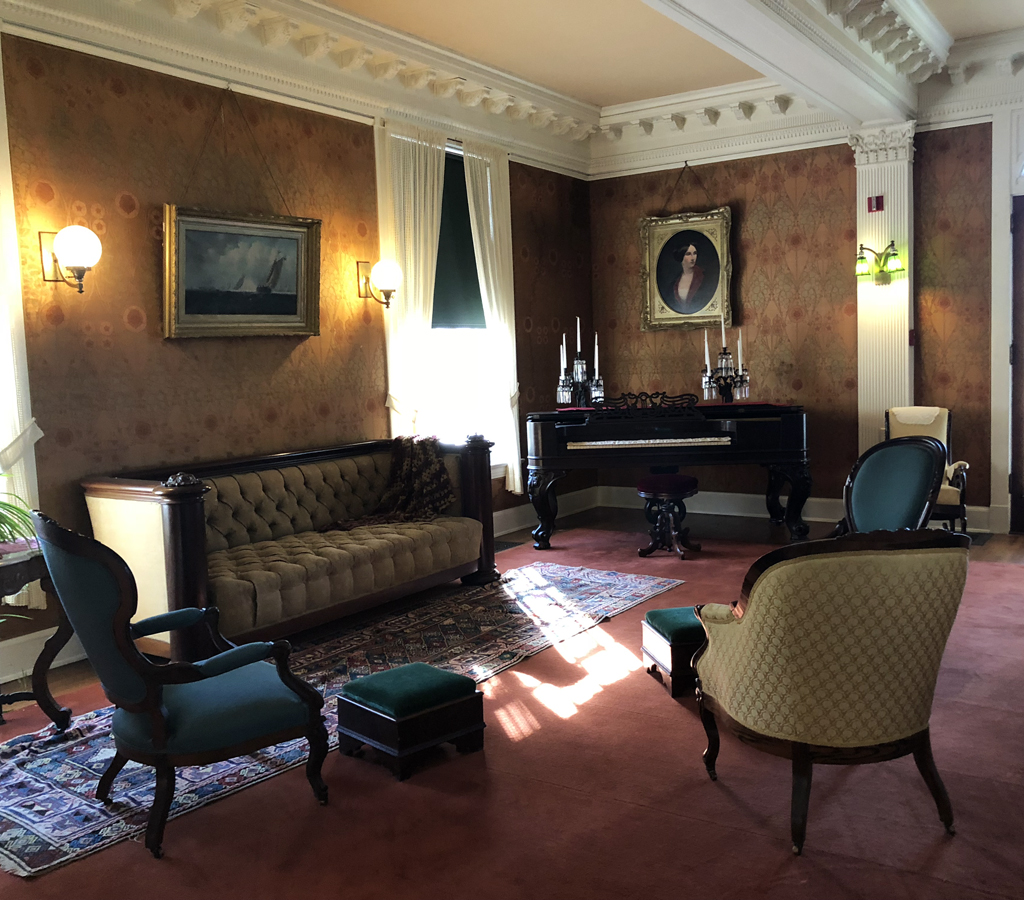 Upstairs are the bedrooms, along with many more Morton family artifacts. These dresses of Carrie’s are so tiny! 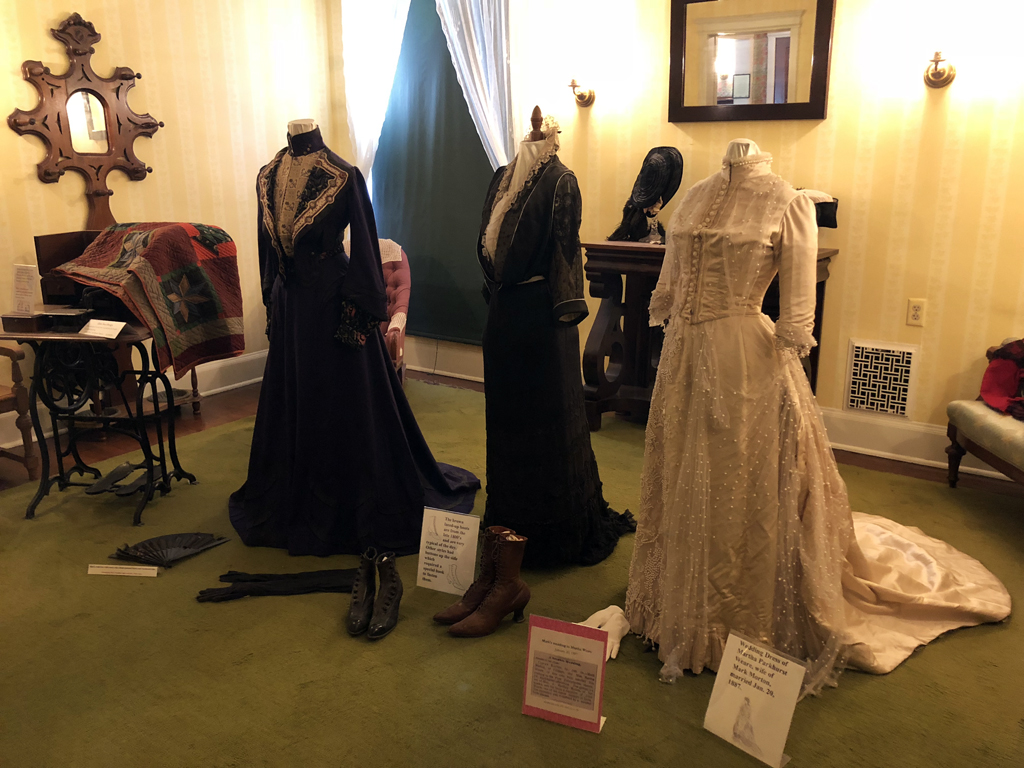 Check out how huge the door is here – it leads to the balcony. 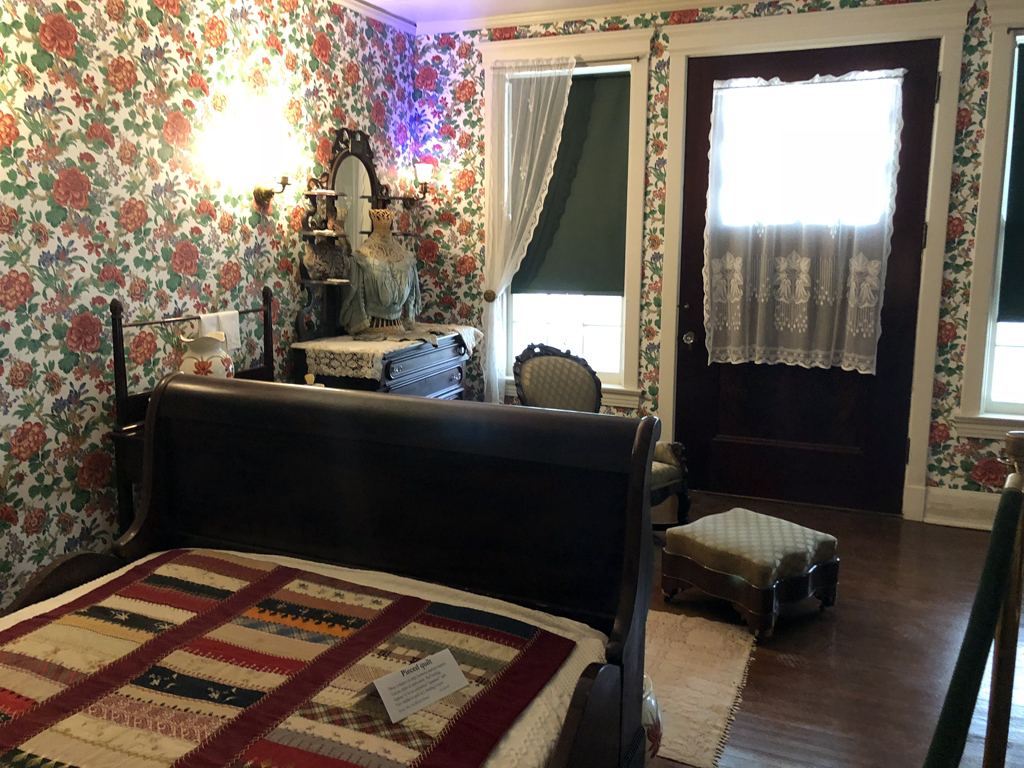 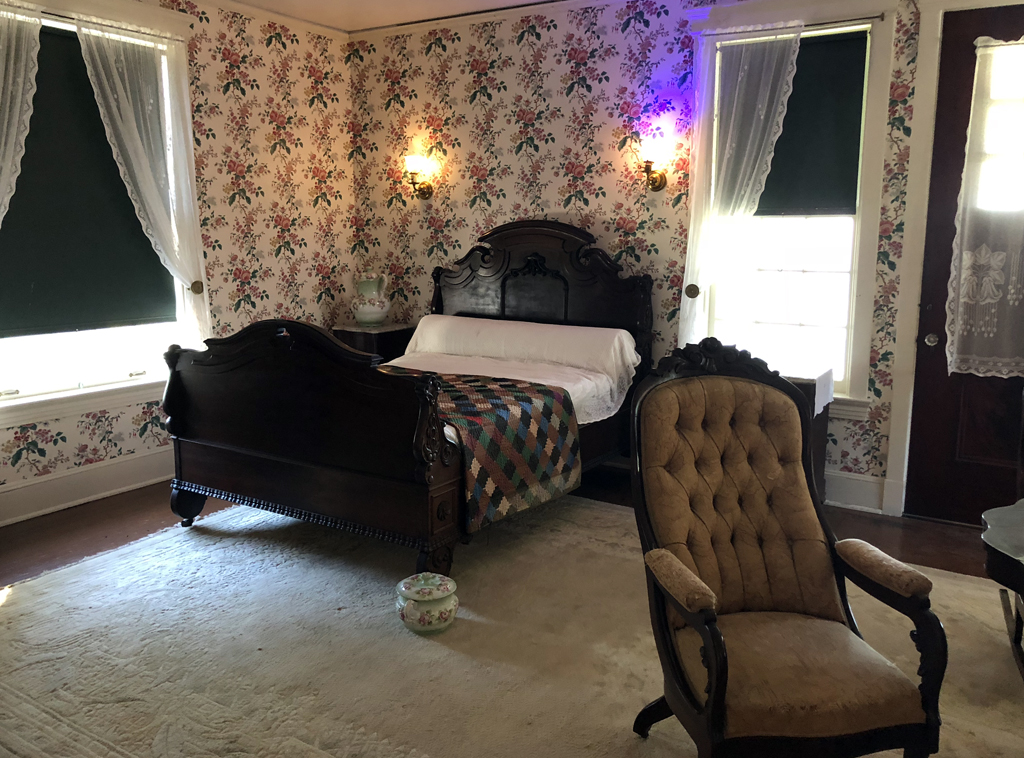 Also upstairs are several rooms with printing press equipment and lots of other historical items: 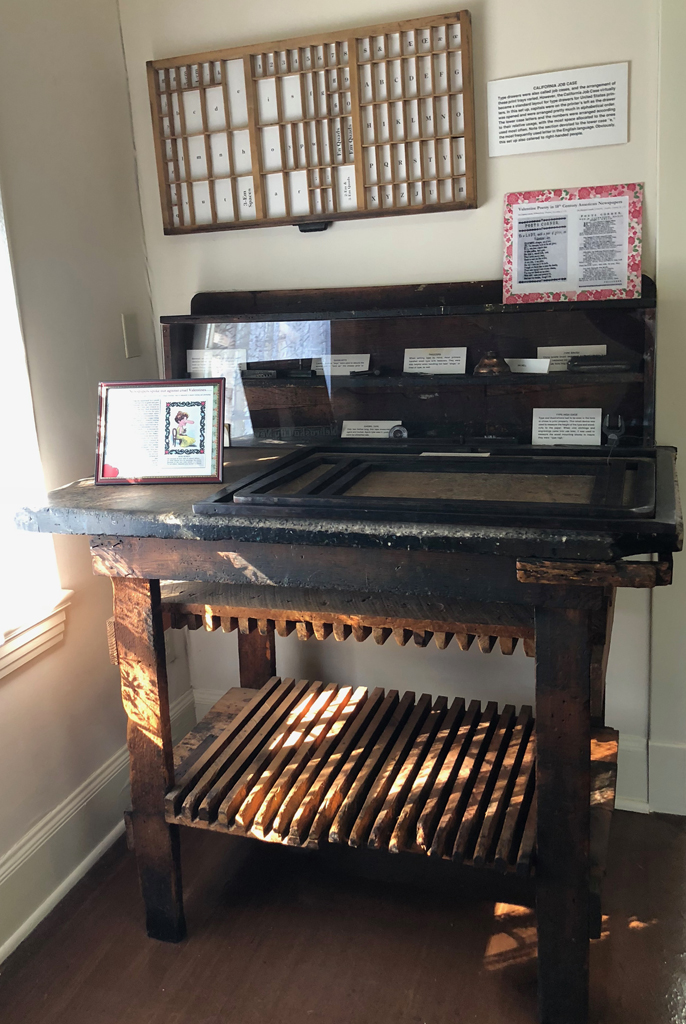 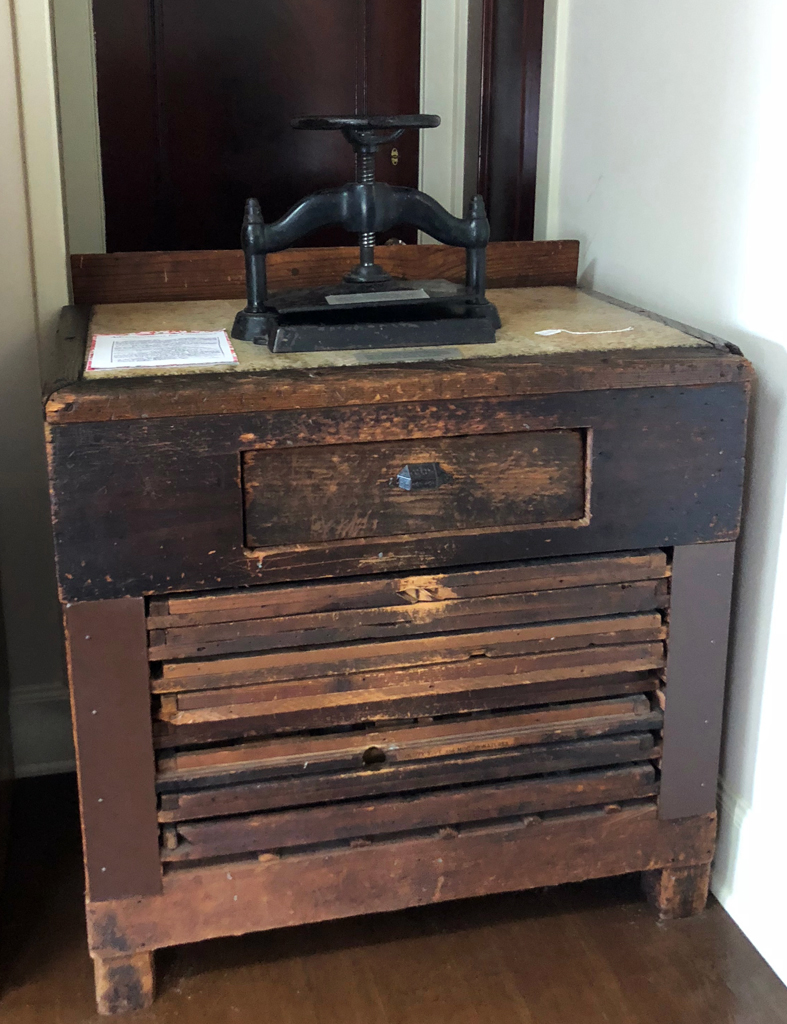 Lastly we visited the basement, which has a bowling alley! 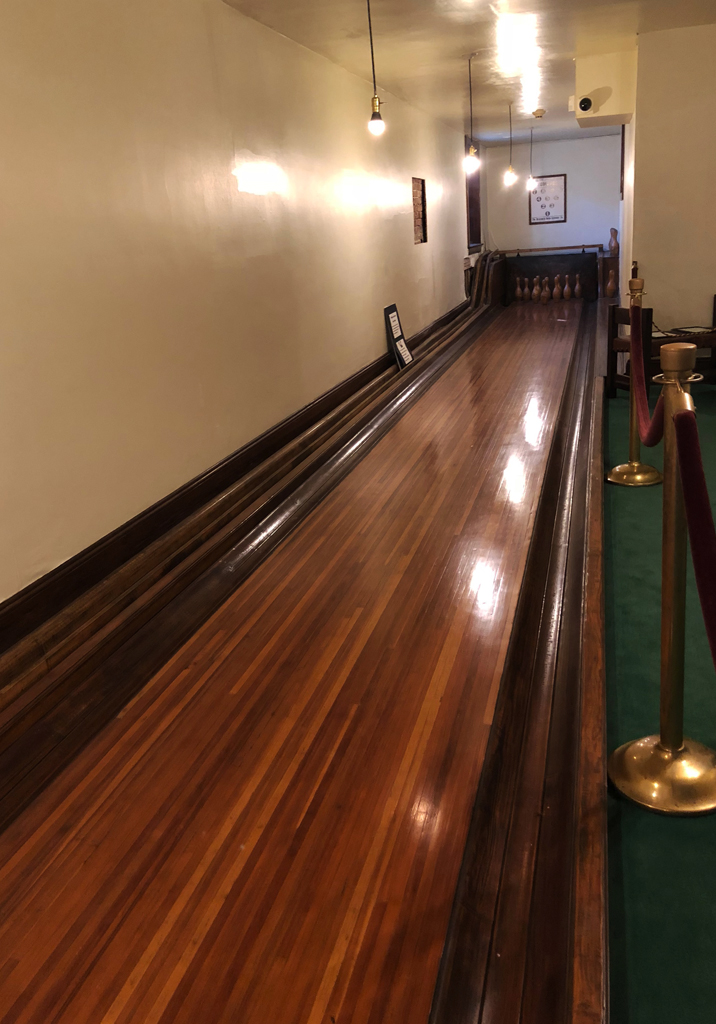 There is much more to this estate, including a terraced garden and stables, but I’ll stop here. I’ll show you the stables next week. Stay tuned! 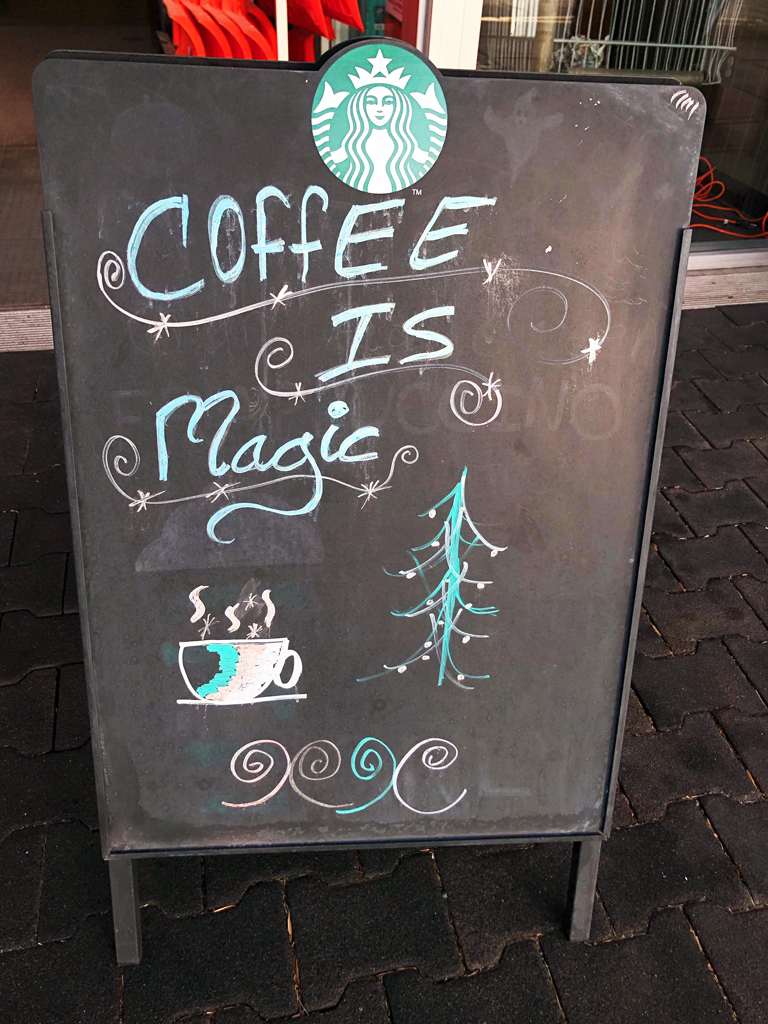