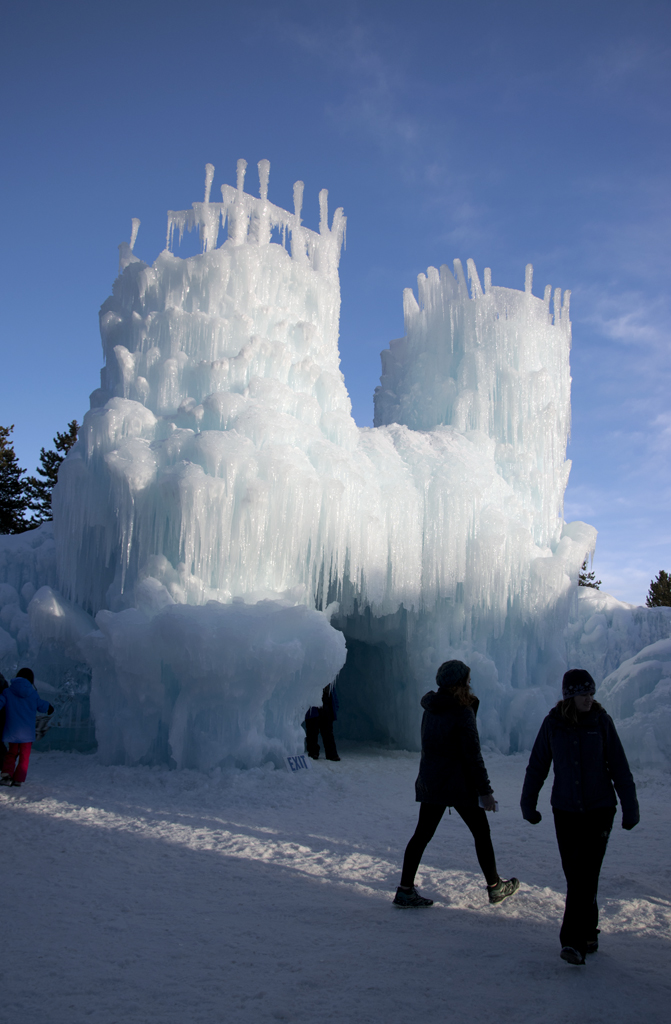 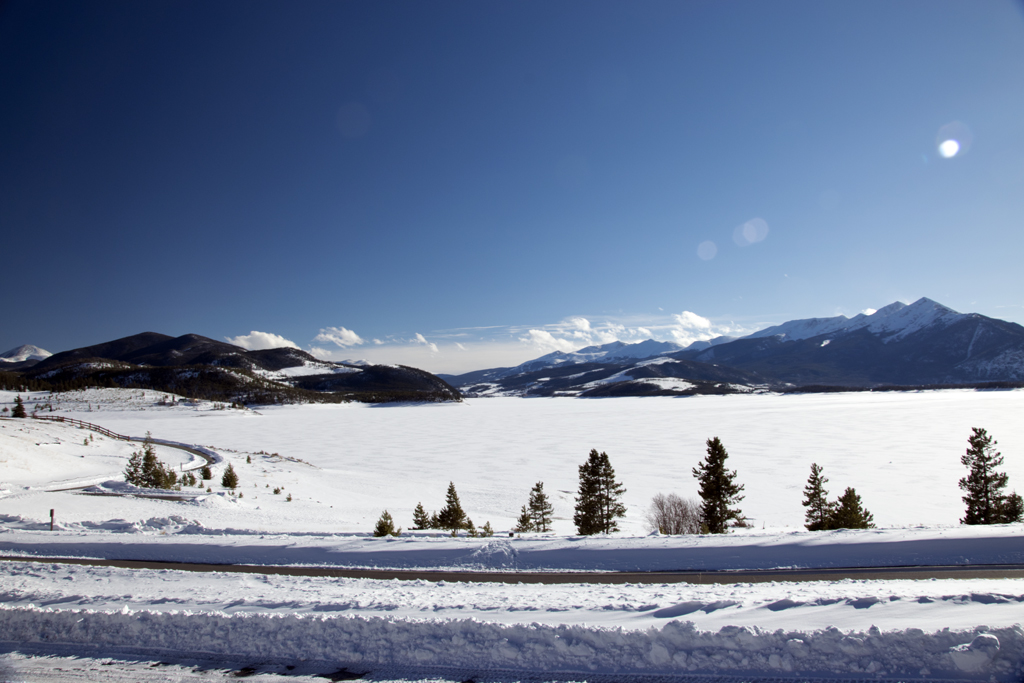 Some time in late fall/early winter, a crew showed up at Town Park in Dillon (and five other places) and started setting up some water sprinklers on poles. As the weather grew colder, water sprinkled and leaked out of the poles, freezing into icicles. Over the next few weeks, the crew moved and raised the poles in a predetermined process so that, eventually, this happened: 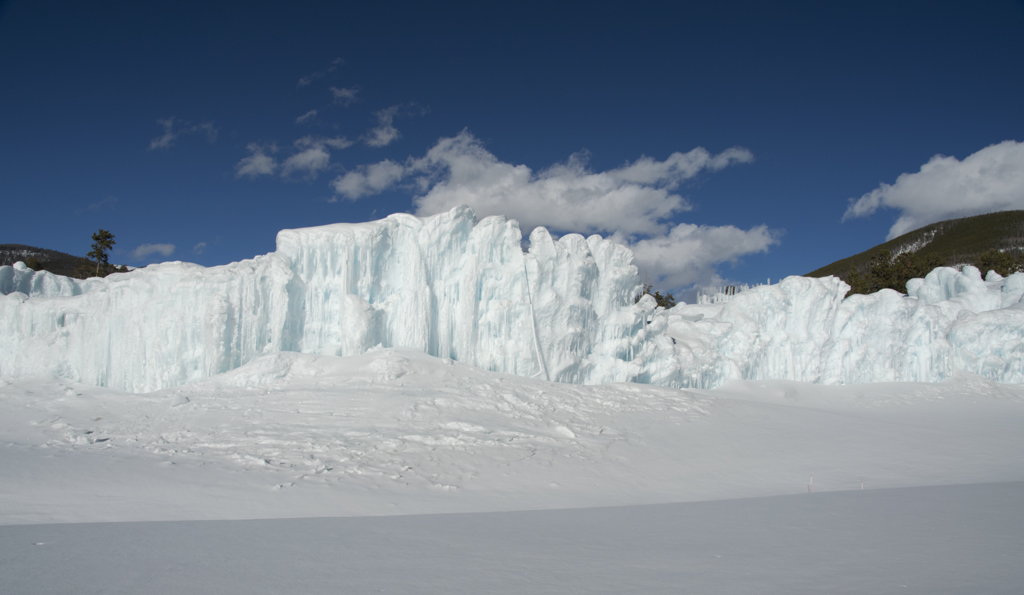 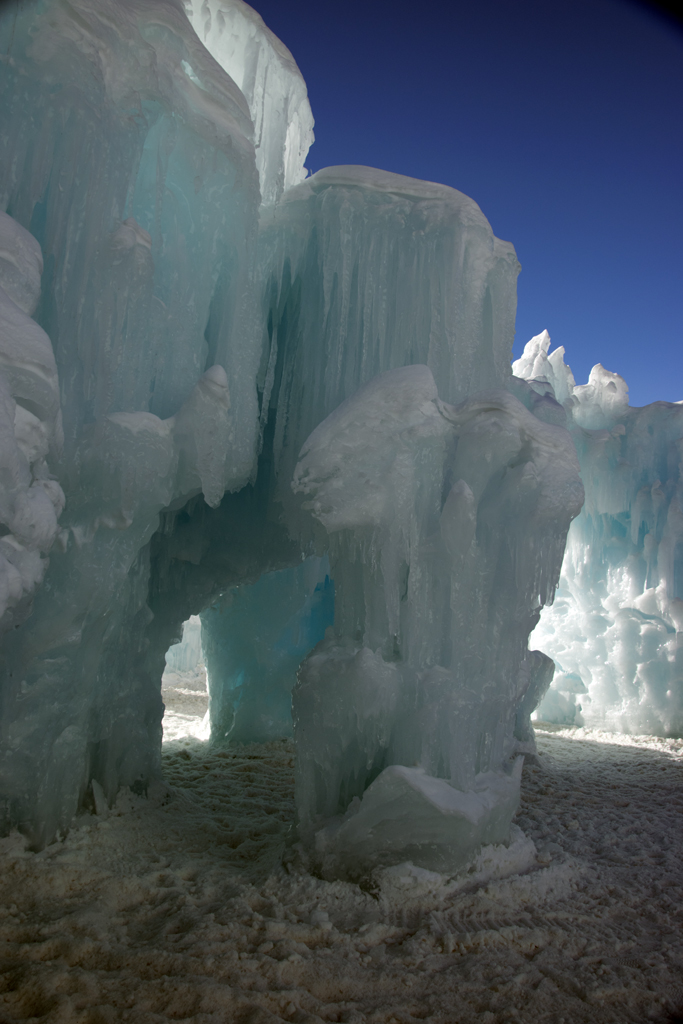 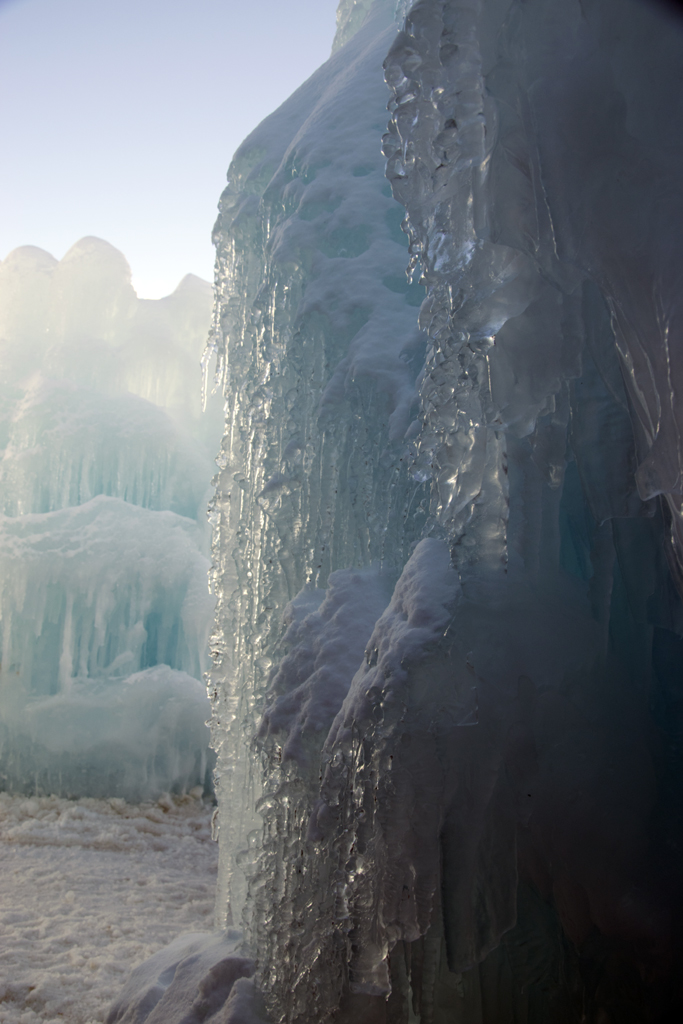 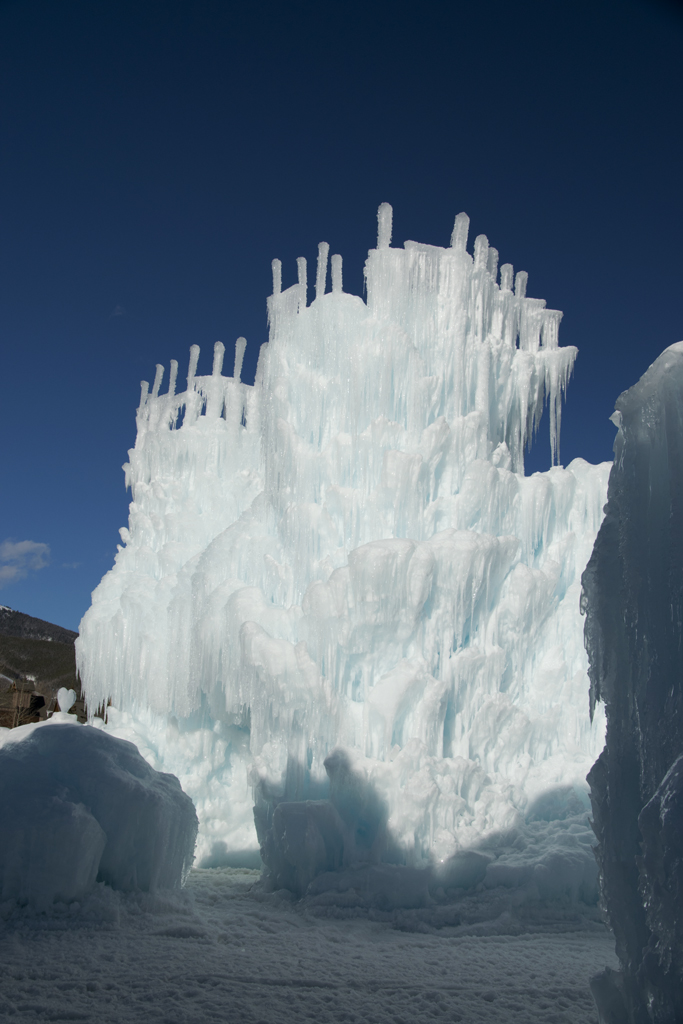 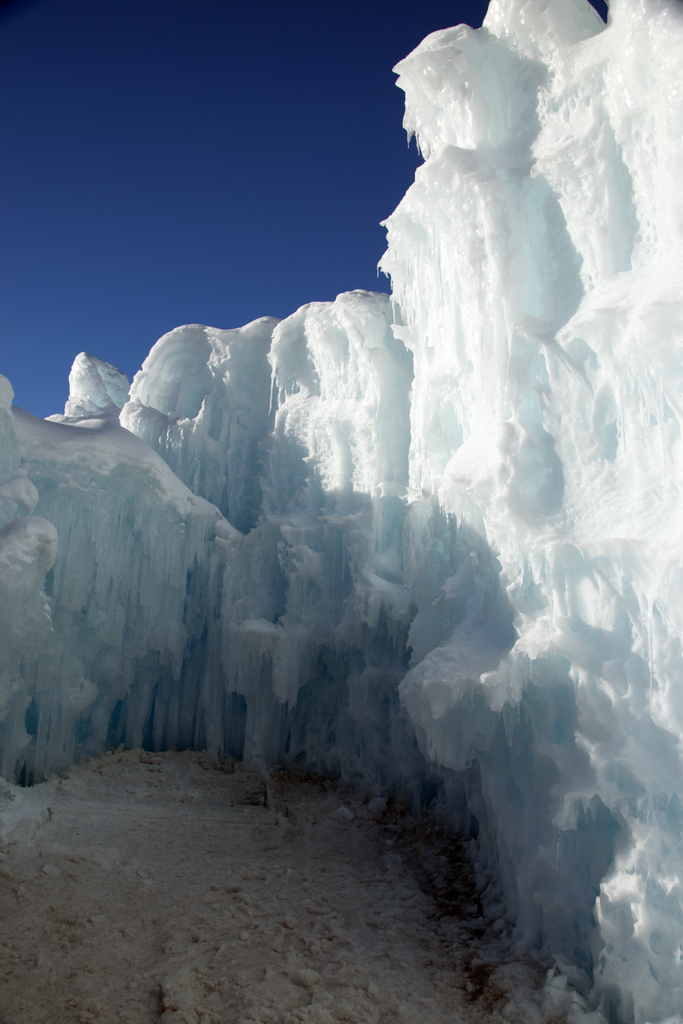 The resulting wonderful ice structure is known as the Ice Castles, and you can visit them! And so we did. Here is the courtyard you see when first entering: 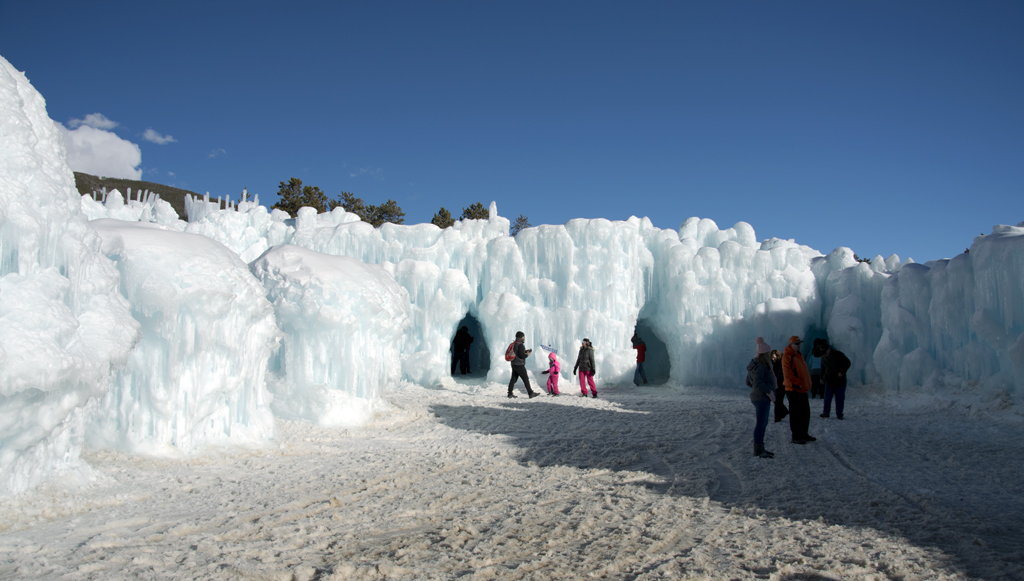 The ground is weird. It’s a very dry slush-type substrate that looks and walks a lot like sand but made of ice. A real workout: 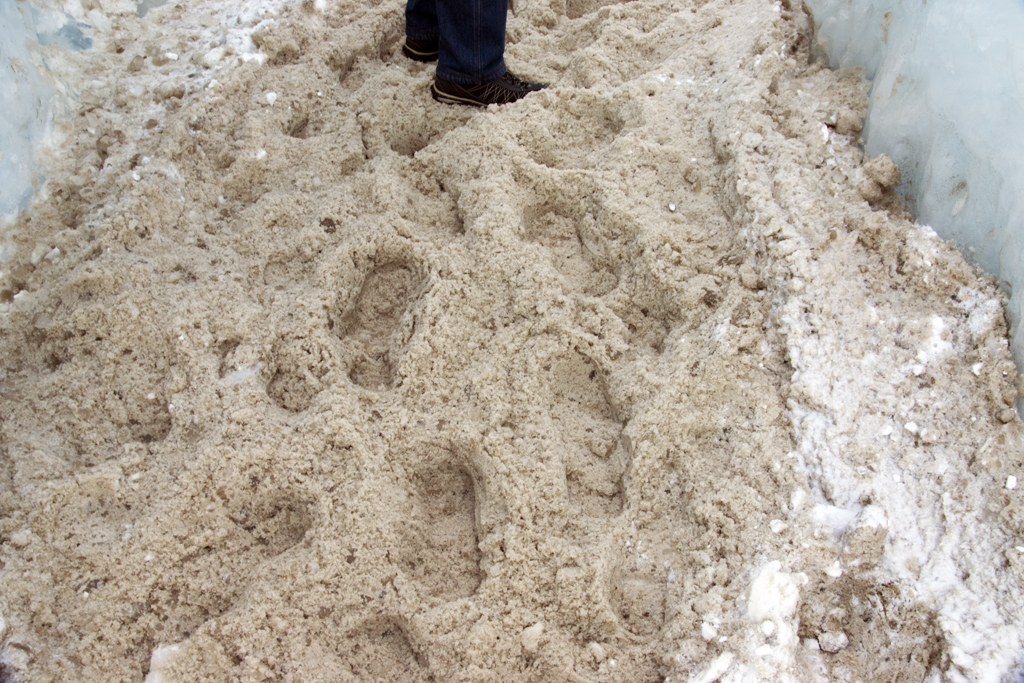 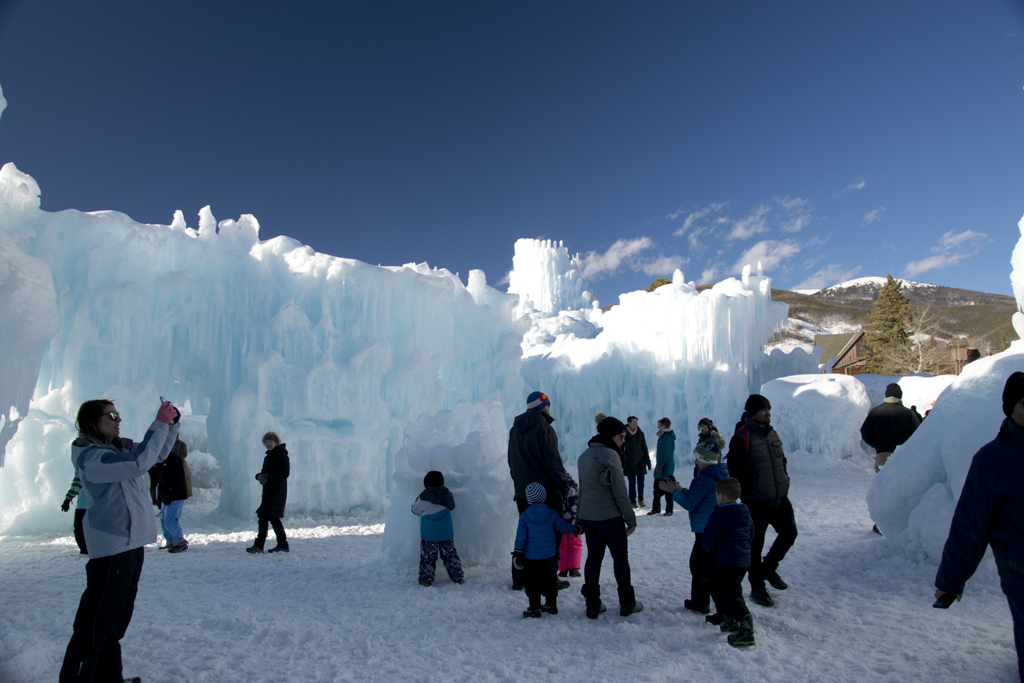 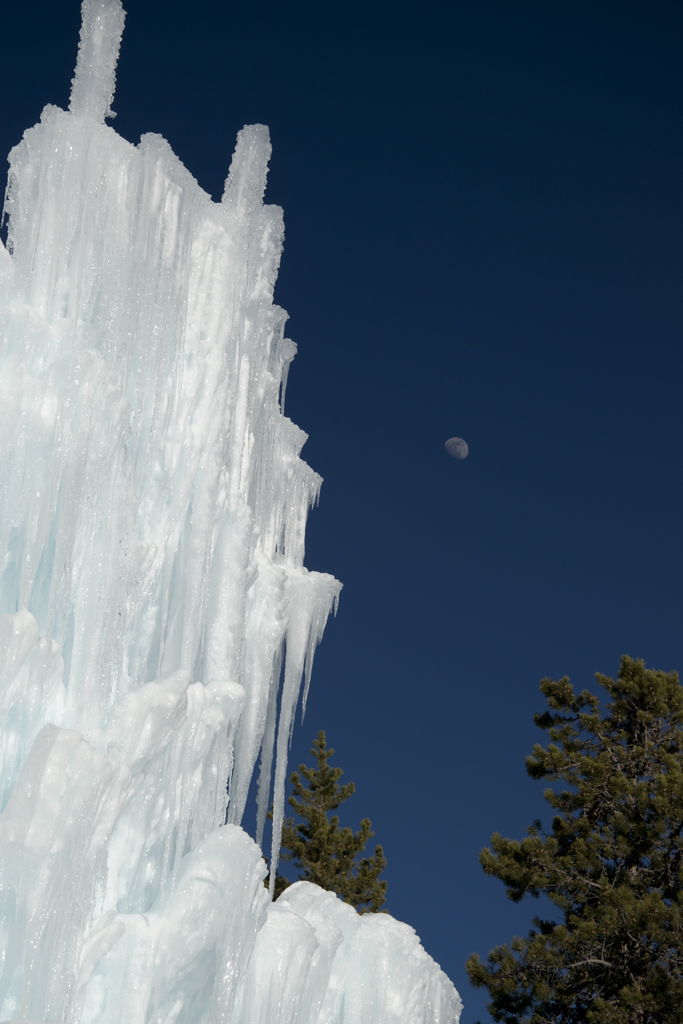 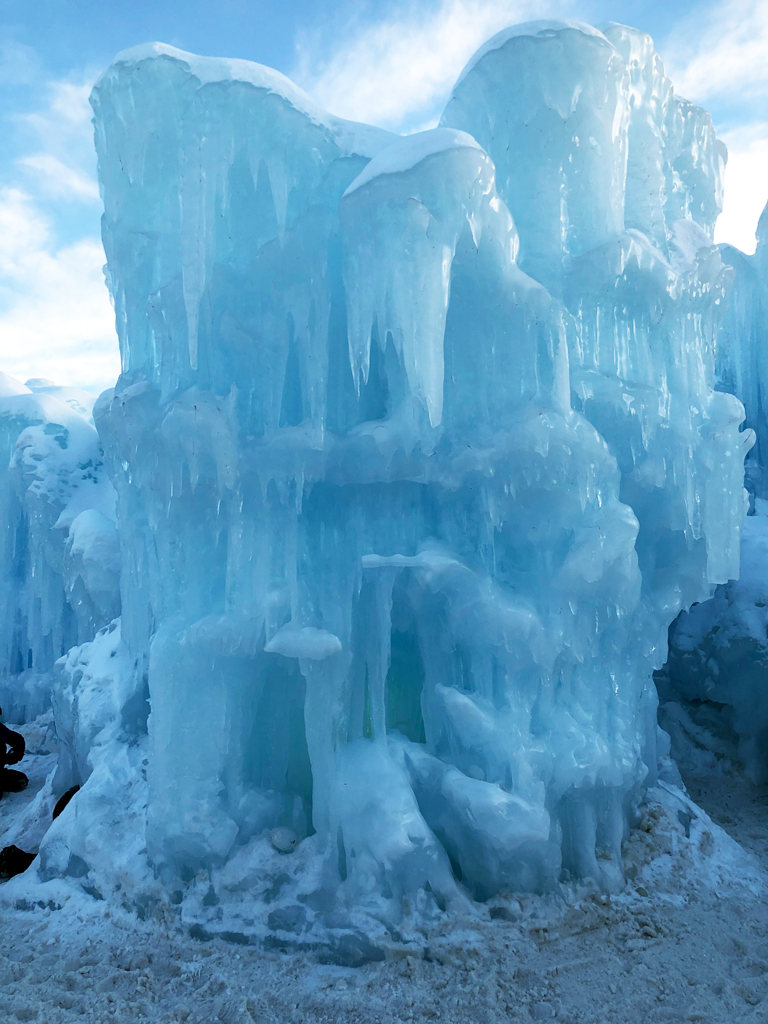 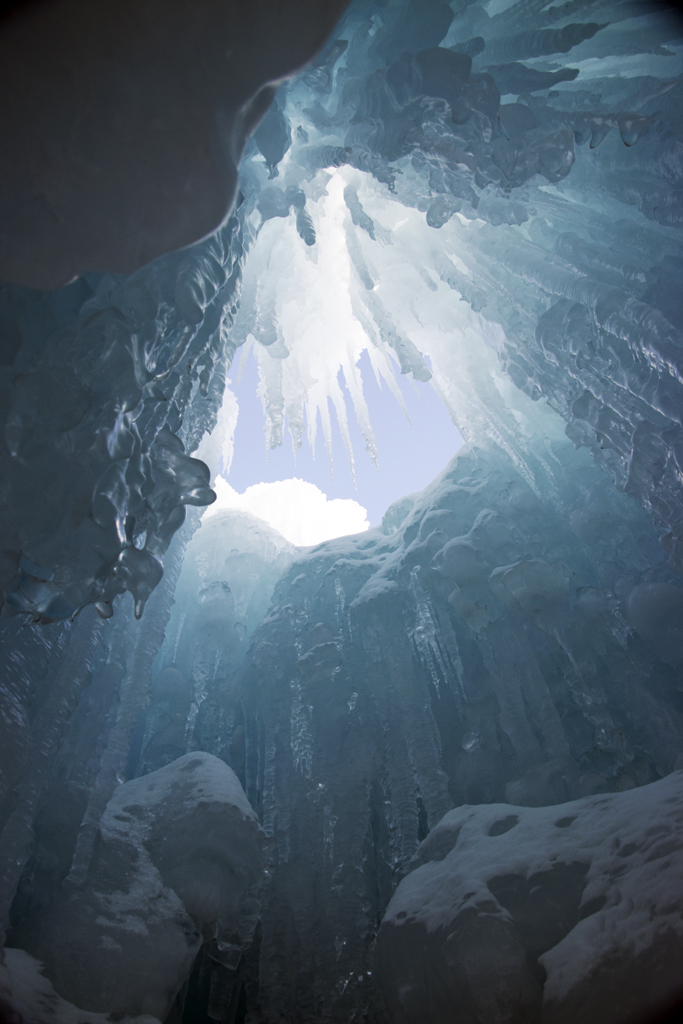 I swear you can see people in the ice in this one: 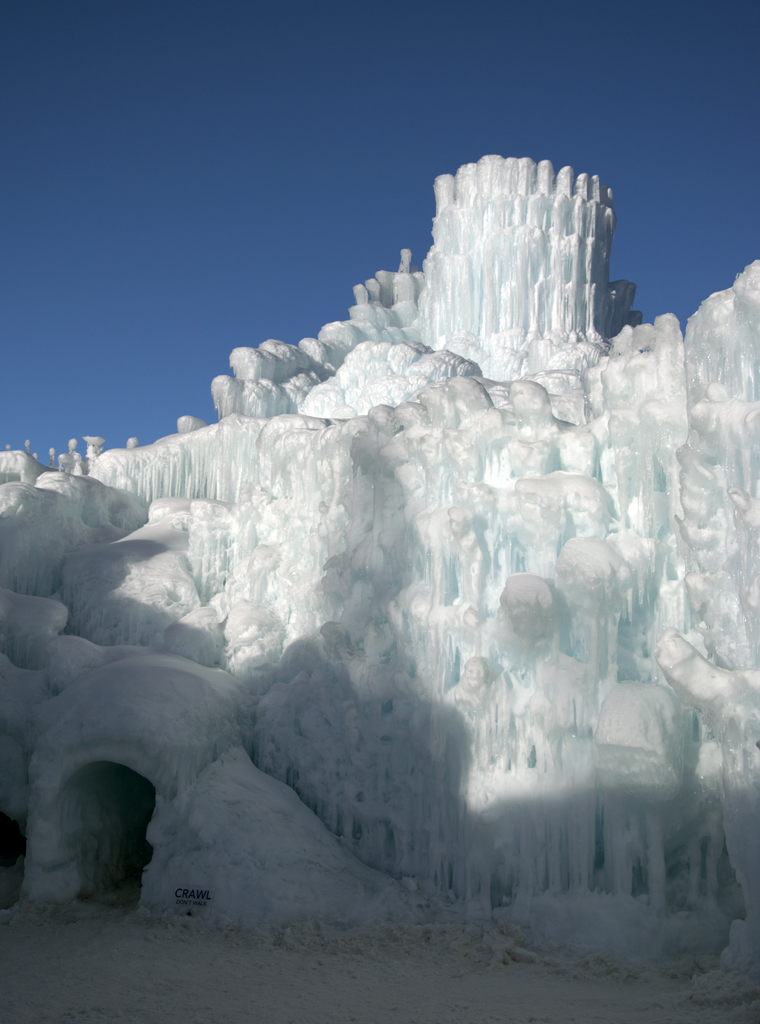 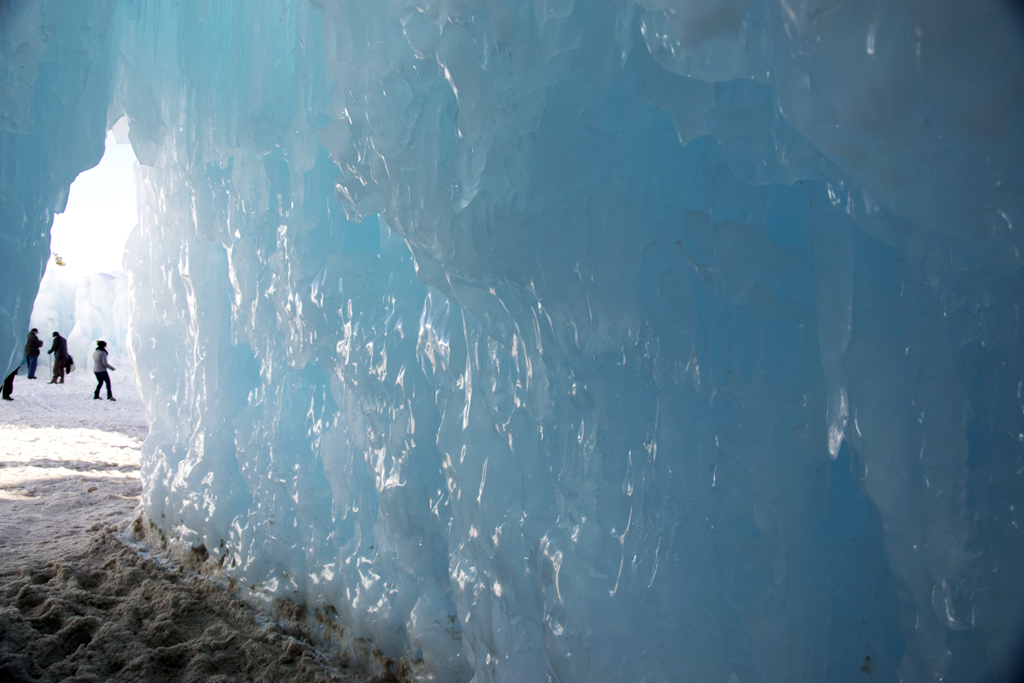 Of course, lots of kids were there, crawling through several tunnels in the walls: 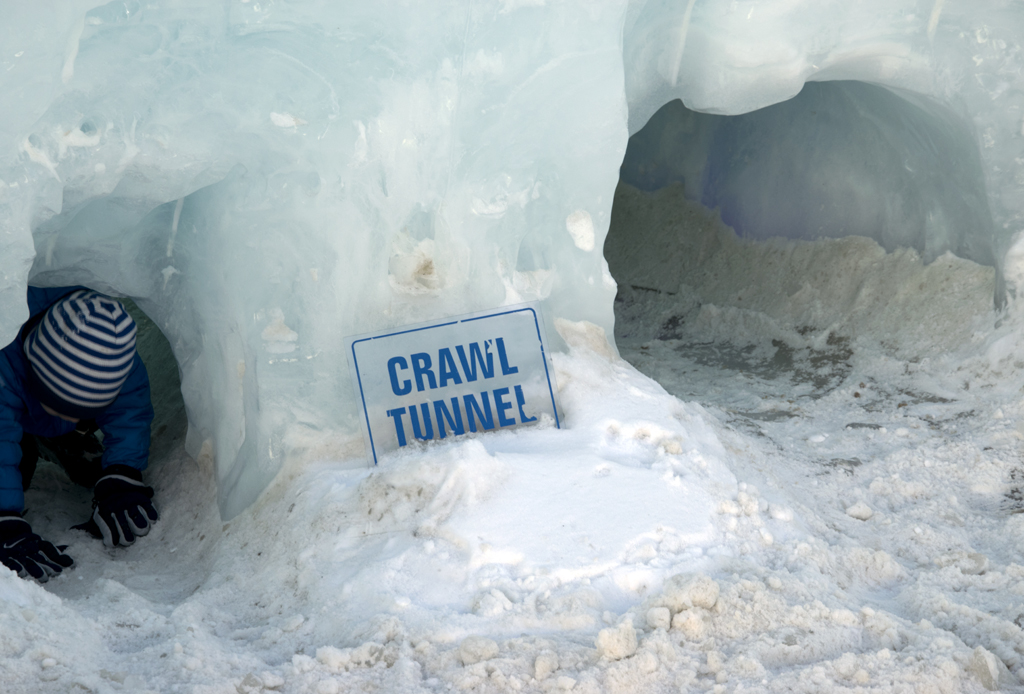 Here’s a tunnel I crawled in. When the inner room was much smaller (claustrophobic) than I expected, I exited hastily! 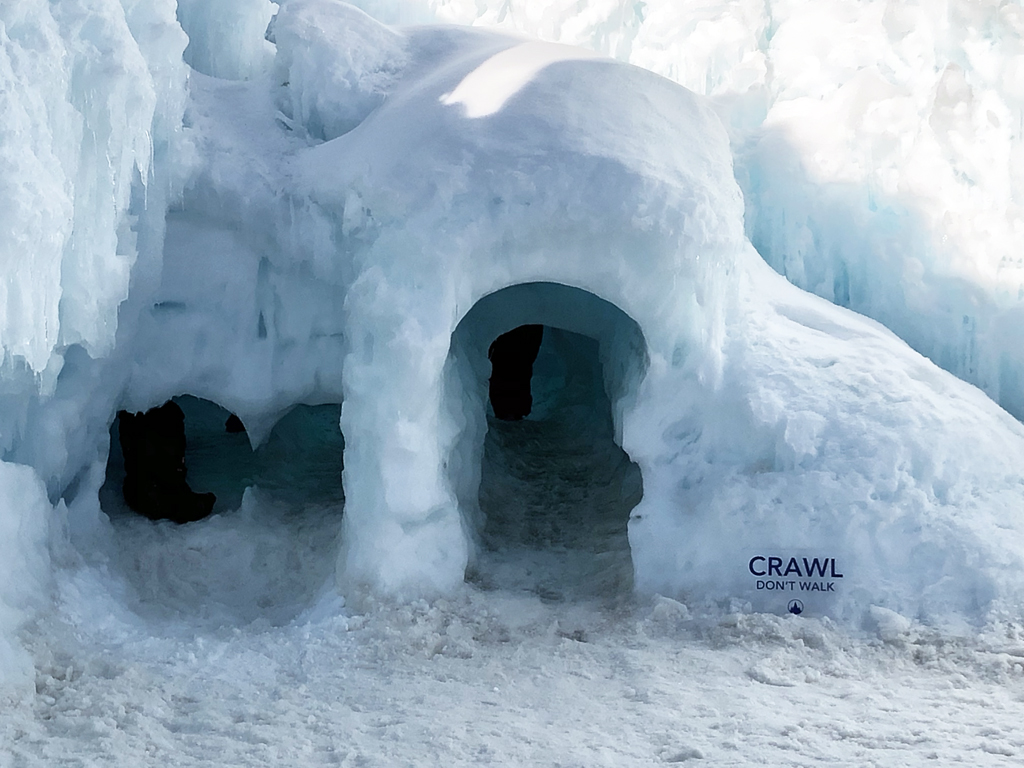 There was a small ice slide, which I slid: 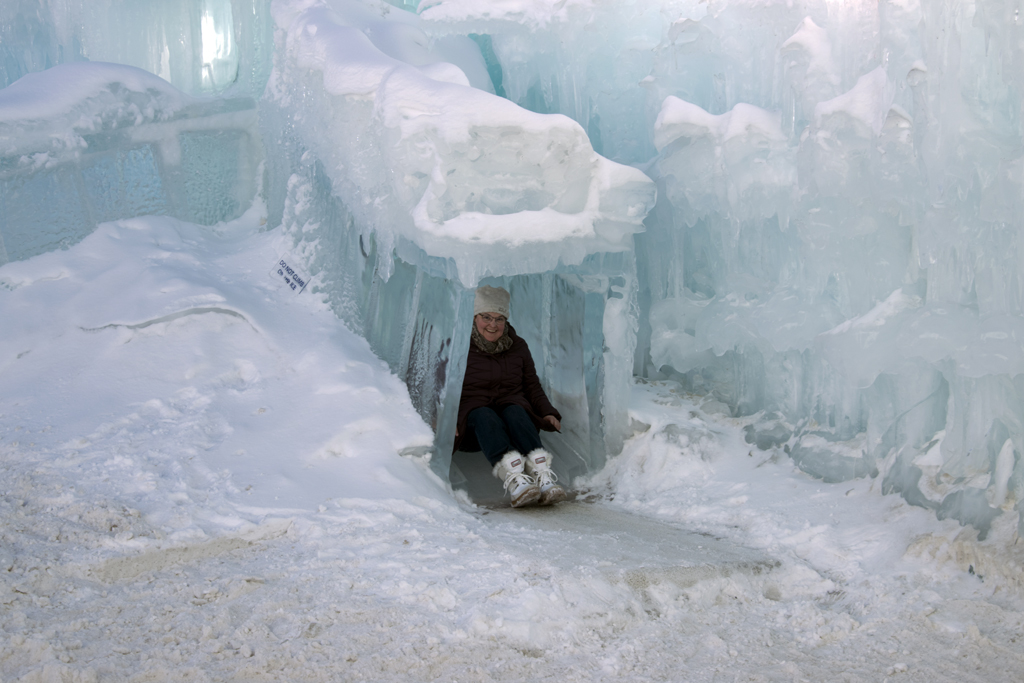 And a larger and very popular ice slide which my husband slid:

In one of the inner chambers was a fountain into which you could throw coins – it was a fundraiser for a charity that builds wells for communities in need of that. I managed to catch these droplets illuminated by the setting sun: 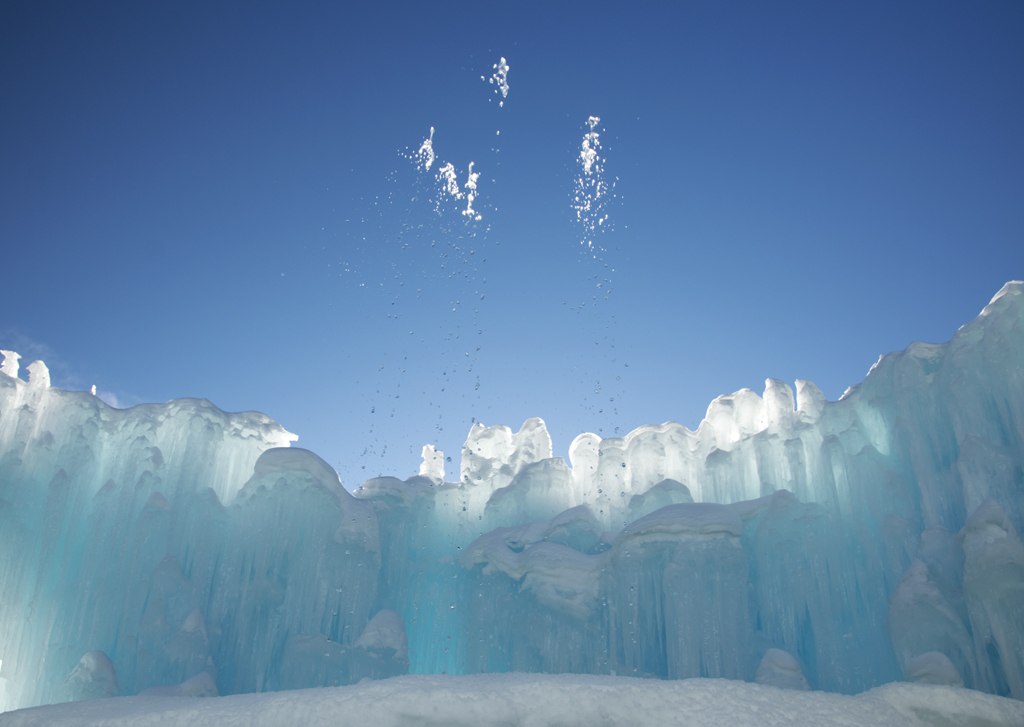 A few cutesy signs were scattered throughout: 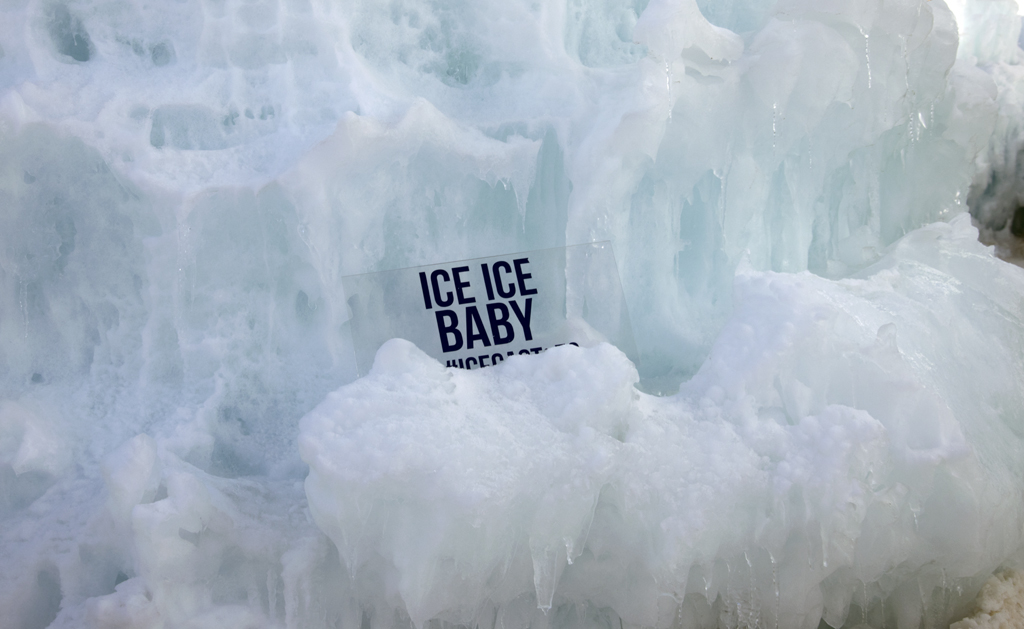 My husband and I took a few hundred photos because everywhere you looked was something more interesting: 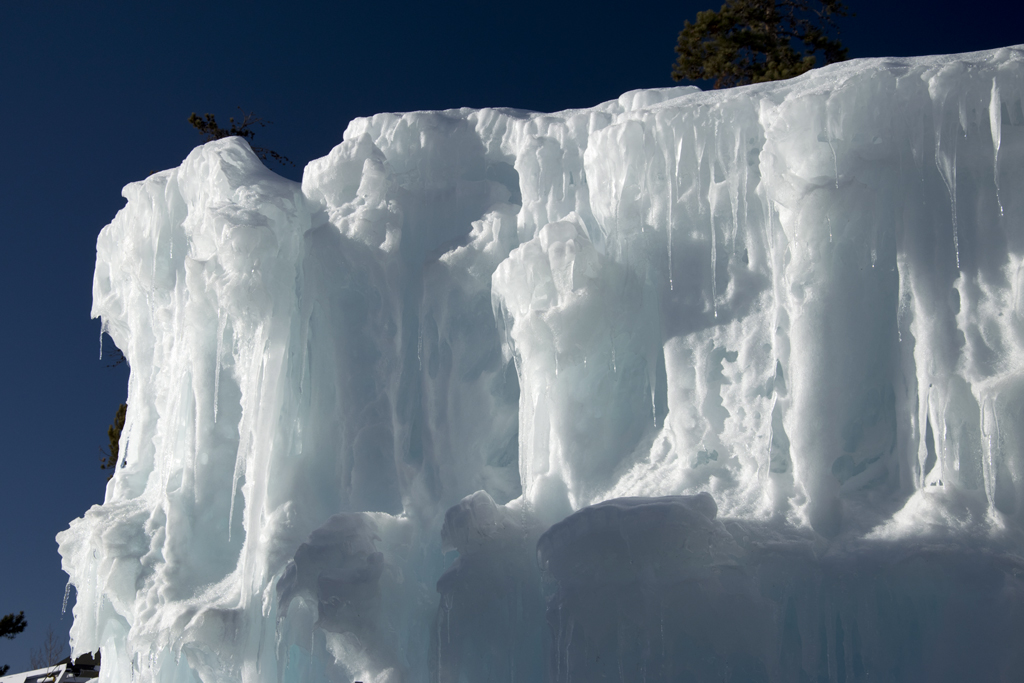 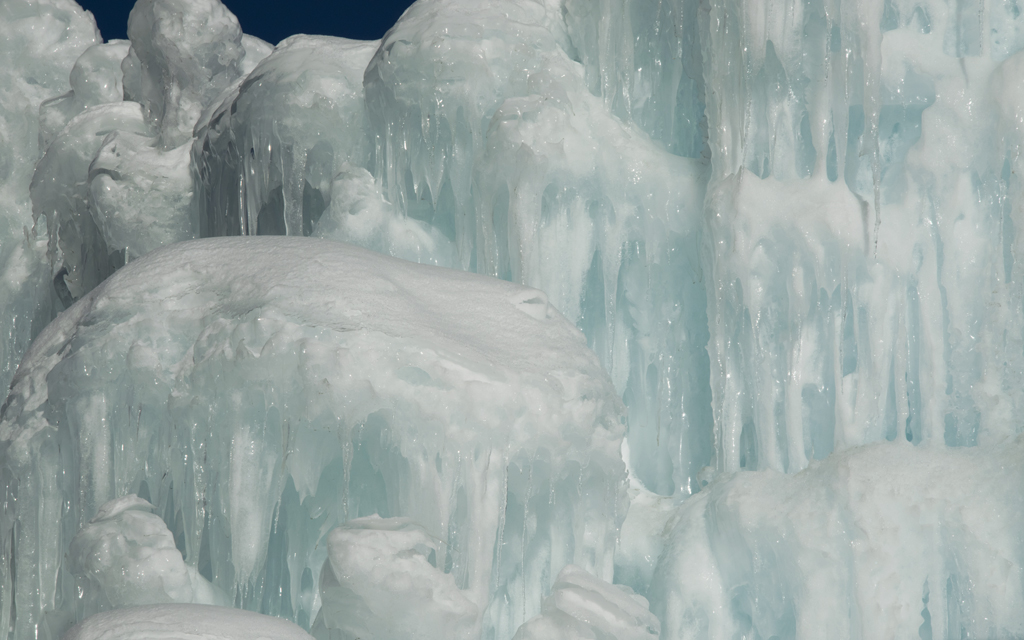 The Ice Castles had its inaugural year in Dillon in 2017-2018. There was some talk last year that they wouldn’t return. The reason was that the 300,000+ gallons of water that makes up this structure caused erosion in the park as it melted in the spring. I’m glad they were able to work that out and come back in 2018-2019.

As the sun set, the sky changed to a beautiful purple, which made me take the same shots over again with a sky that looks photoshopped: 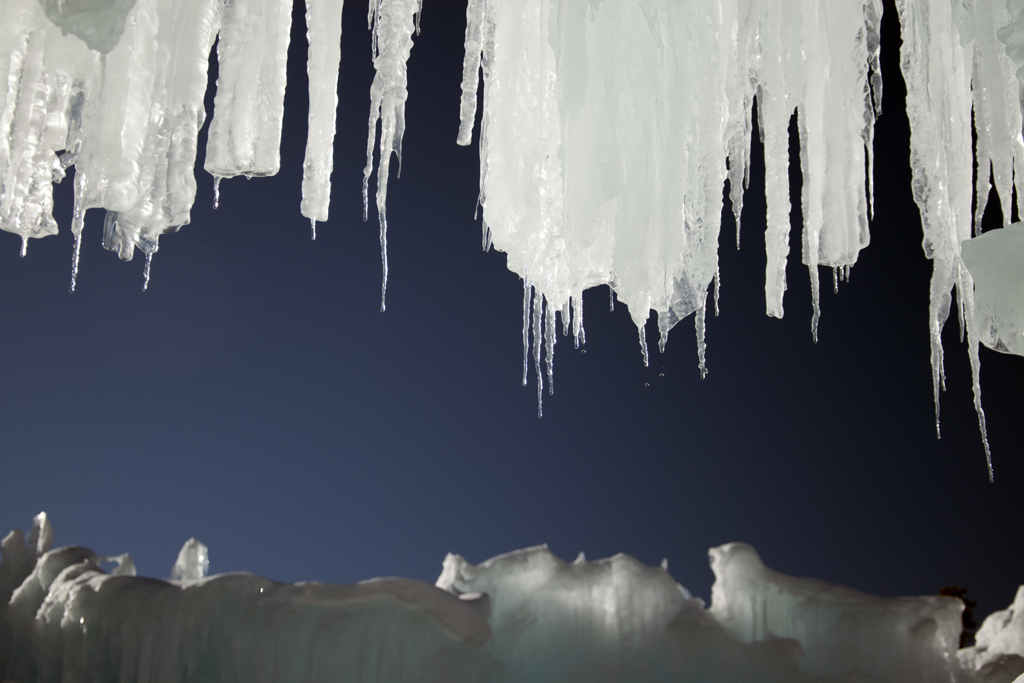 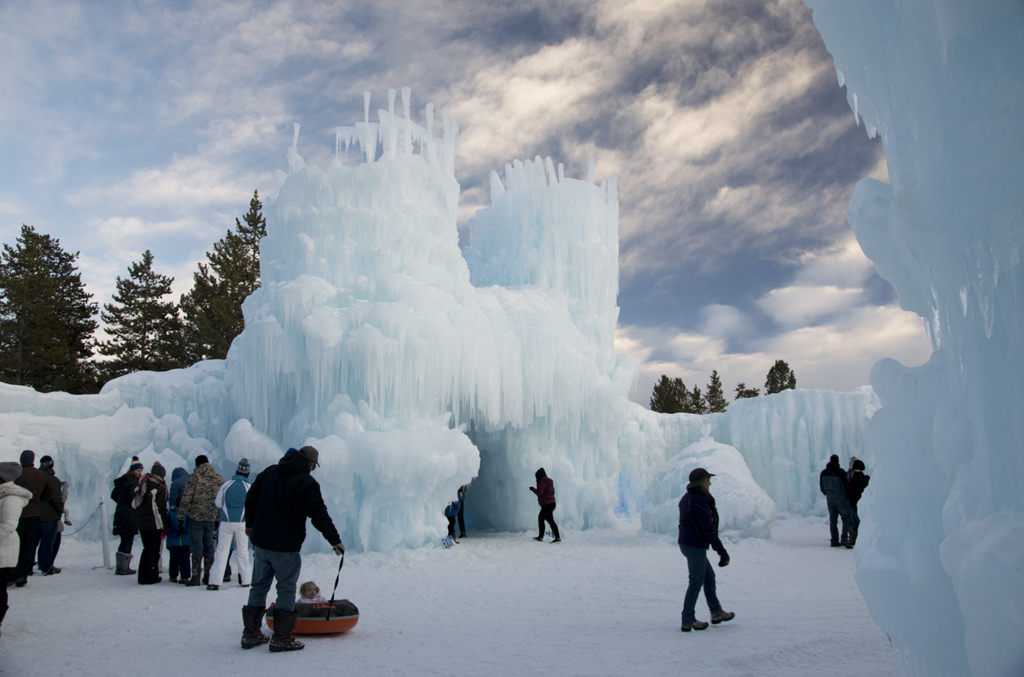 We arrived at 4pm – you buy the tickets for an entry window of time, and we had to enter between 4:00 and 4:30. You can’t enter before or after your window, but once you’re in you can stay as long as you like. And, man, the light was awesome, as you can see. I think about an hour and a half is enough to see and slide down everything. However, we waited around til late dusk because, when they build the Ice Castles, they embed LED lights inside the ice, so there is quite a show after dark. But I gotta tell ya, your feet get REALLY cold standing around in that slush or whatever it is. I managed to get a couple of shots of the LEDs just beginning to appear. Here’s a video with one of the wall light shows:

However, we were tired and had a drive ahead of us, so we left before it got totally dark. But I recommend googling images for Ice Castles after dark. It’s really breathtaking! Here’s a hint of light from the outside as we exited: 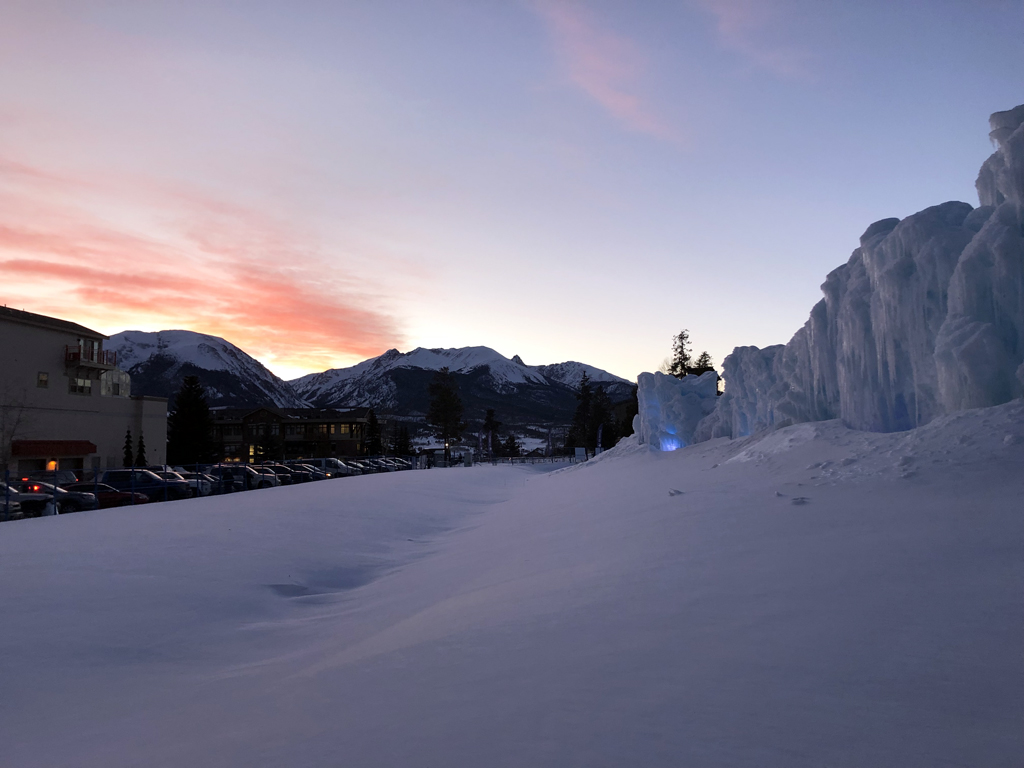 Next time I’ll go later. Of course, the Ice Castles are only open so long as the weather is cold enough. I think they stay on top of that, too, because we saw at least one guy climbing the ice sculptures to check them for stability. I believe the place is only open from late December through mid-March in Dillon.

Tickets start at about $19 for adults, less for children. They’re more if you don’t purchase them online. The place is open 4-9pm Mondays and Thursdays, 4-10:30pm Fridays, noon-10:30pm Saturdays and noon-8pm Sundays – closed Tuesdays and Wednesdays. Totally worth planning the trip! 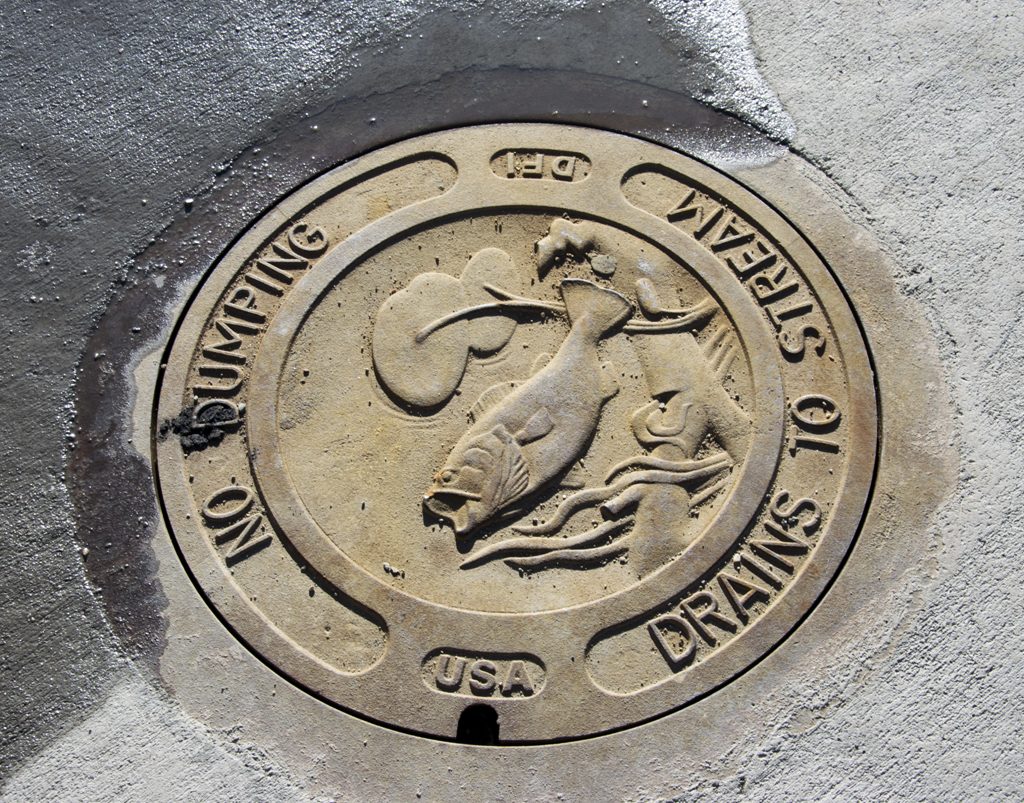