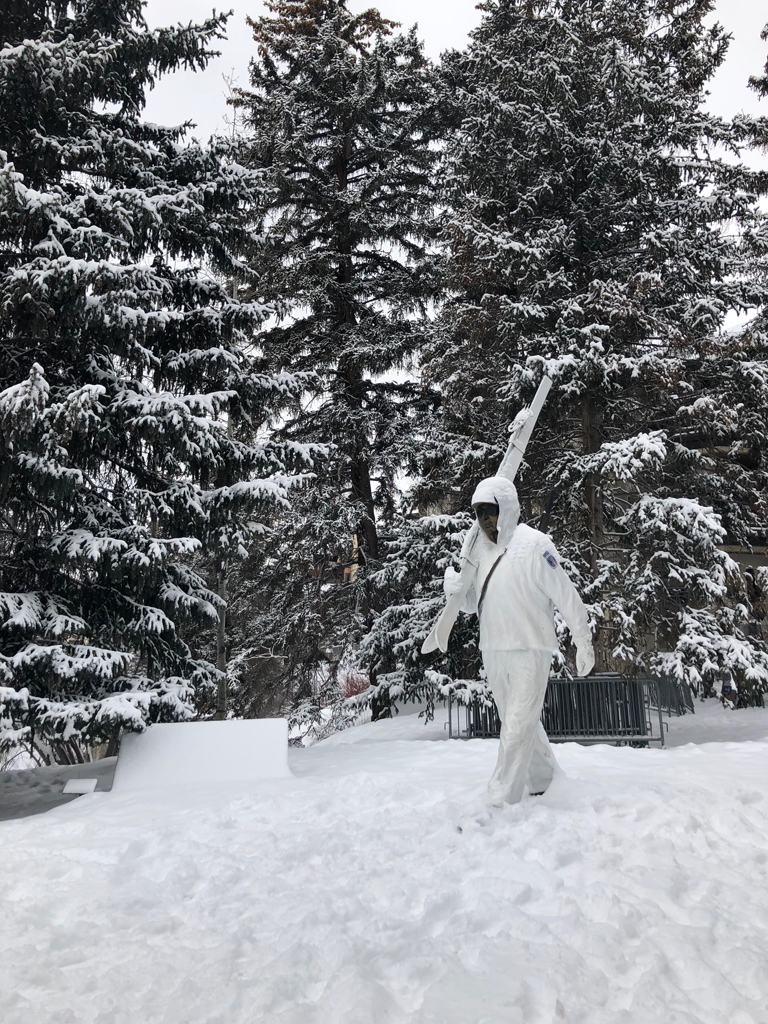 Have you heard the latest news?

is now available at Amazon – at last!

YOU know PFNAR: the photos at the end of each blog post – the pics are unrelated to the blog posts and have no explanation. Until now!

Where did I take the pictures? What on earth motivated me to take and post them?

THIS BOOK IS A PART OF A SERIES – DO YOU HAVE THEM ALL?

On the way from Dillon to Vail recently, my husband and I were driving along I-70 on a very dark night. I wouldn’t recommend this drive, but at least it wasn’t snowing. There wasn’t much to see, including the lines on the road, but, as we passed Vail Village, I saw a lighted image projected onto the side of the mountain. Shaped like a badge, it had a V in the middle, but also looked like crossed skis or swords; it was maybe 50-100 feet high, but I couldn’t be sure. The purpose wasn’t clear, and I was left with only questions.

As luck would have it, the answers came in spades the next day! While touring Vail Village, one of the first things we passed was the Colorado Snowsports Museum and Hall of Fame. It was closed when we arrived early that day, but I saw a photo shoot in progress through the window. The subject of the portraits was an elderly man in a military uniform.

Across from the museum was this statue, which is larger-than-life-sized, or else it could be mistaken for a real person:

That guy showed up everywhere that weekend! 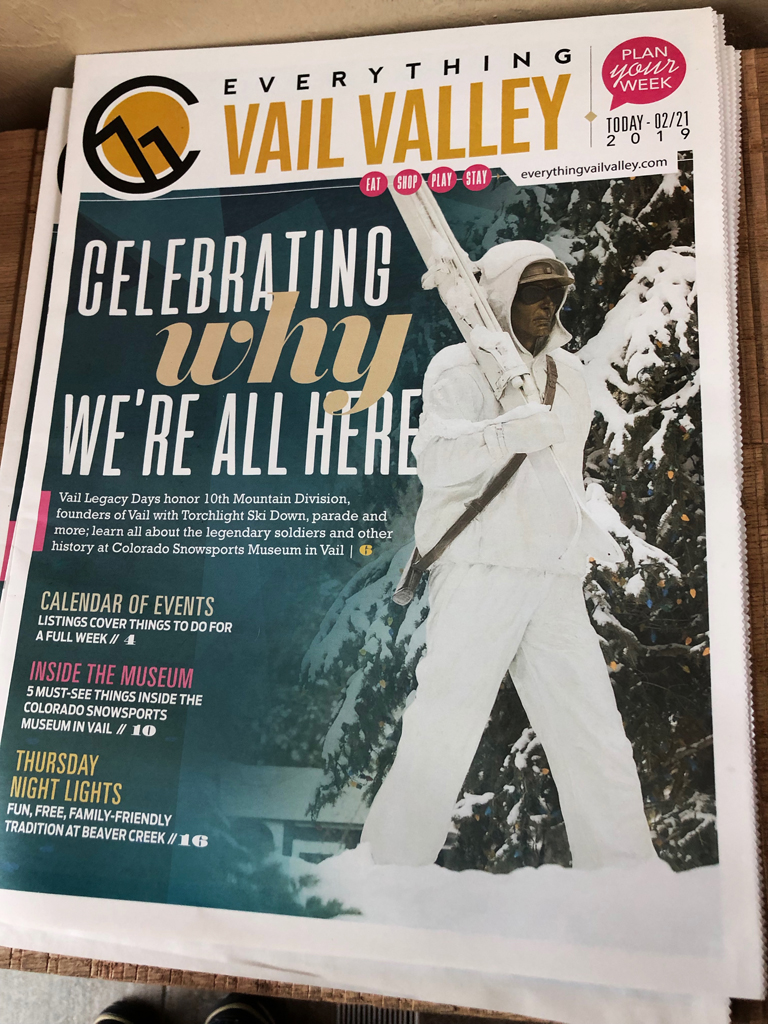 The statue stands in tribute to the 10th Mountain Division, a fabled light infantry army unit based out of NY state. It started as the 10th Light Division (Alpine) in 1943 and was redesignated as the 10th Mountain in 1944. The brigade fought during WWII in rough alpine terrain in northern Italy. The unit has been deactivated, reactivated, and redesignated a few times over the years, but it’s still active. It’s the most deployed unit in the US military.

How does it relate to Vail? The training for WWII soldiers of the 10th Mountain took place at Camp Hale, just 14 miles from Vail. Many veterans of the 10th founded or helped found and run at least 60 ski resorts after the war, too, including Vail. Lots of credit is given to these vets for starting the US ski industry in general.

This particular weekend, the town was conducting Vail Legacy Days to honor this unit and their vets. The person I saw in uniform through the museum window was one such vet.

So, on our way out of Vail Village that day, my husband and I visited the museum. It’s free for a donation, and it is very impressive. I’ll start with the 10th Mountain exhibit.

That illuminated badge on the mountainside I’d seen the night before appears in this museum plaque. Note the crossed skis which also look like swords. 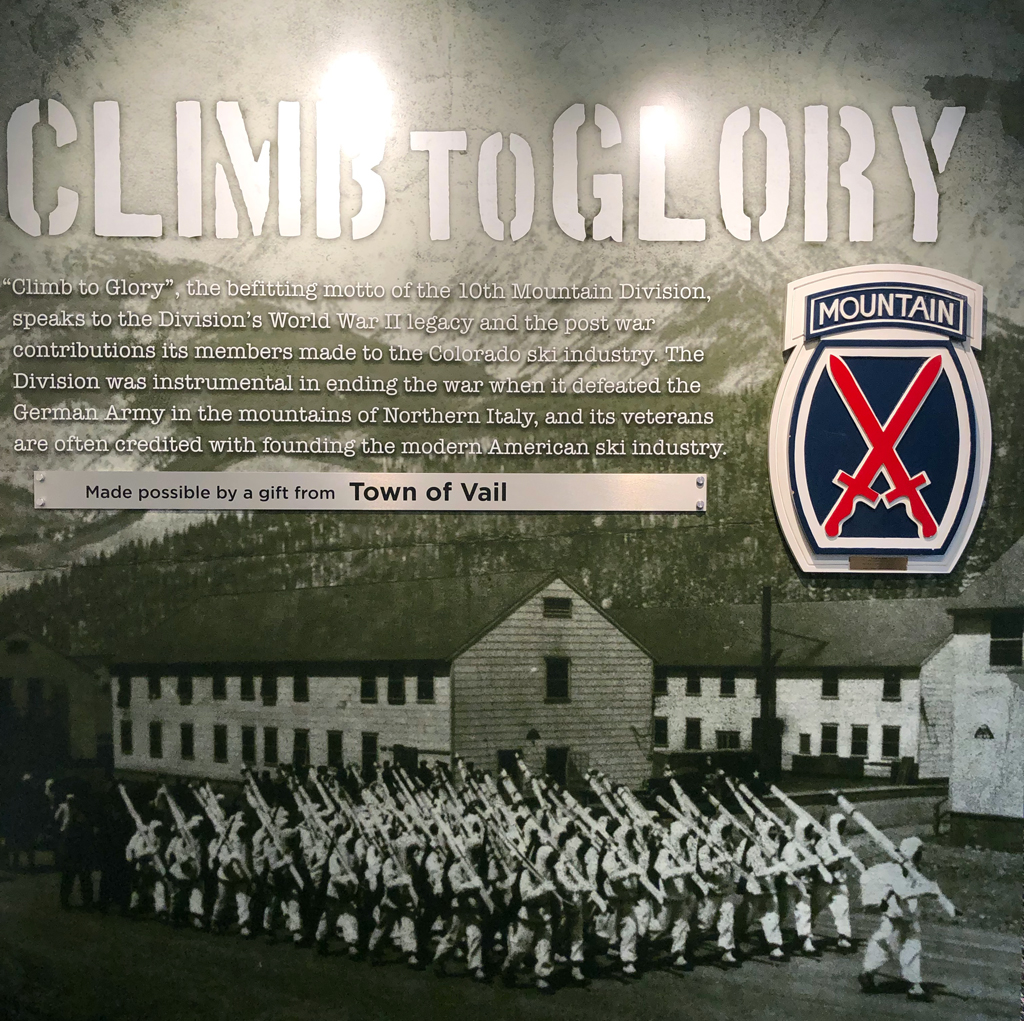 Here’s the layout of the winter gear the soldiers wore in WWII: 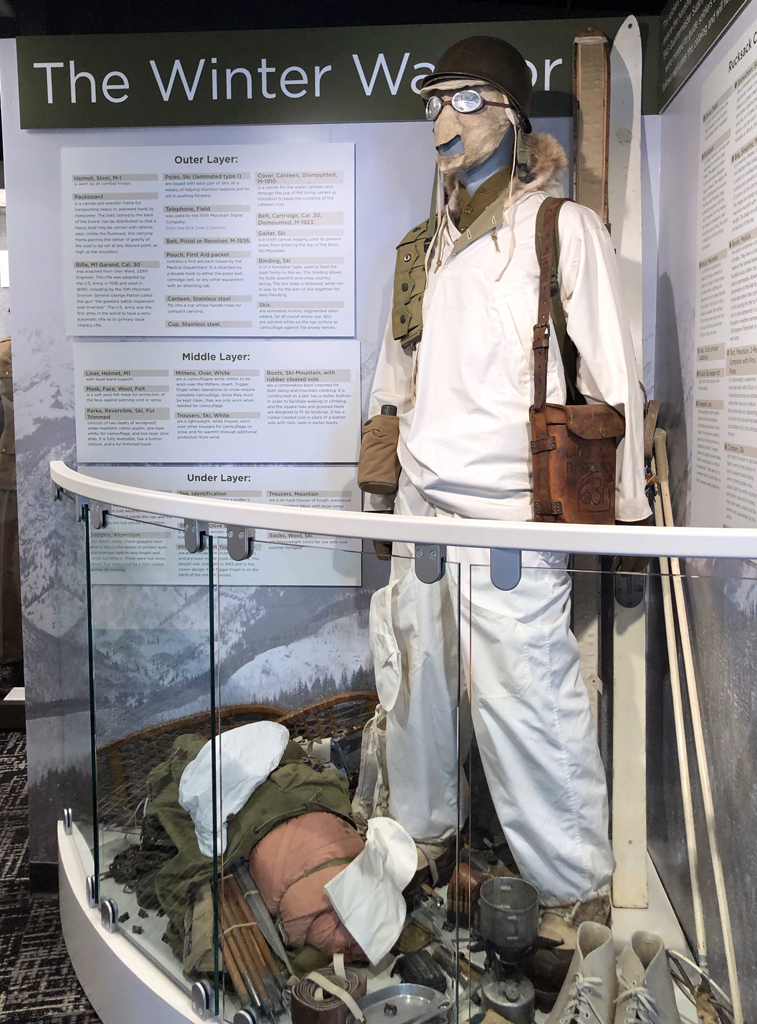 The goggles were especially interesting. They are made of aluminum with tiny slits to see through. This reflected and reduced the bright light of the snow. The plaque said the goggles were not army issue, but that they were worn by the soldiers as the best eye protection before the high-tech goggles of today were invented.

Here’s a dress uniform from the old days: 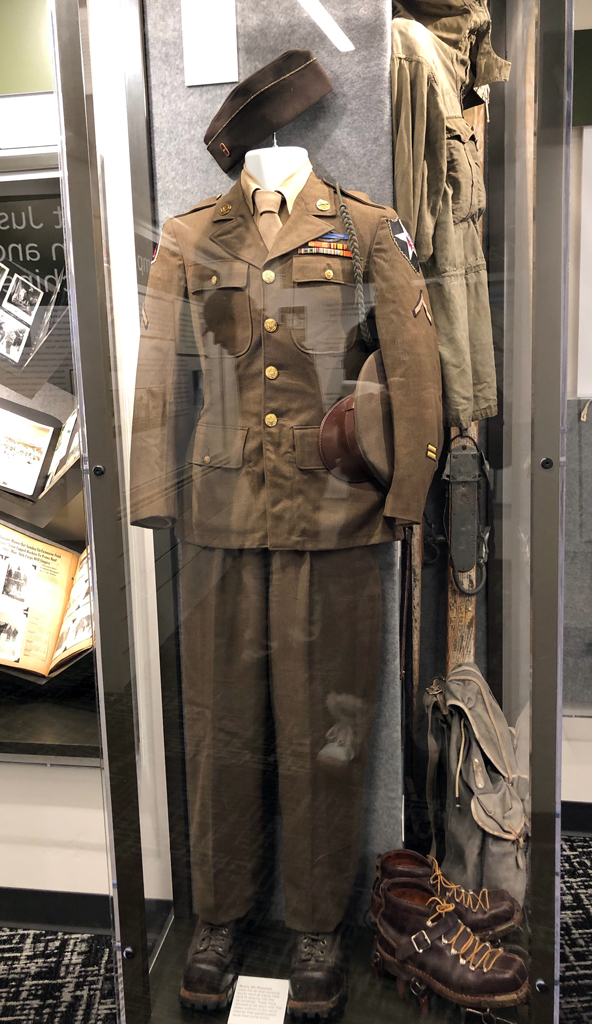 I found the display of personal letters from the soldiers in Europe especially touching: 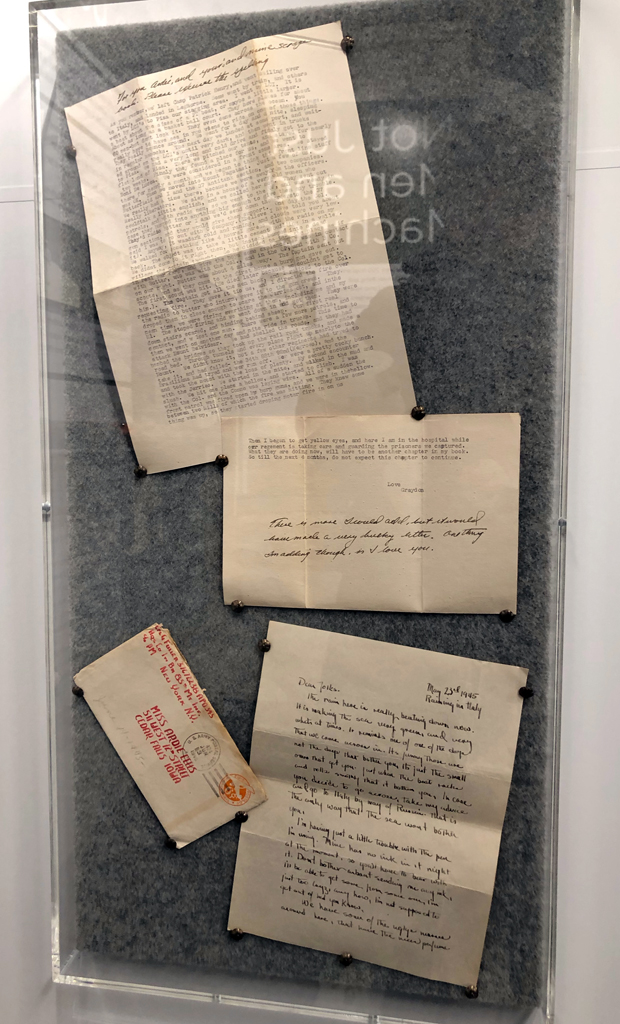 In this one, the typed part recounts, in more detail than I thought the censors would have allowed, the activities of this guy’s unit and how they fended off Axis forces, captured enemies and so on. He says he “began to get yellow eyes”, which I took to mean jaundice, and now he’s in the hospital. The handwritten part at the end says, “There is more I could add, but it would have made a very bulky letter. One thing I’m adding, though, is I love you.” I’m not crying; YOU’RE crying!

But the 10th exhibit was only half the museum. The other half was the permanent display of the history of snow sports. 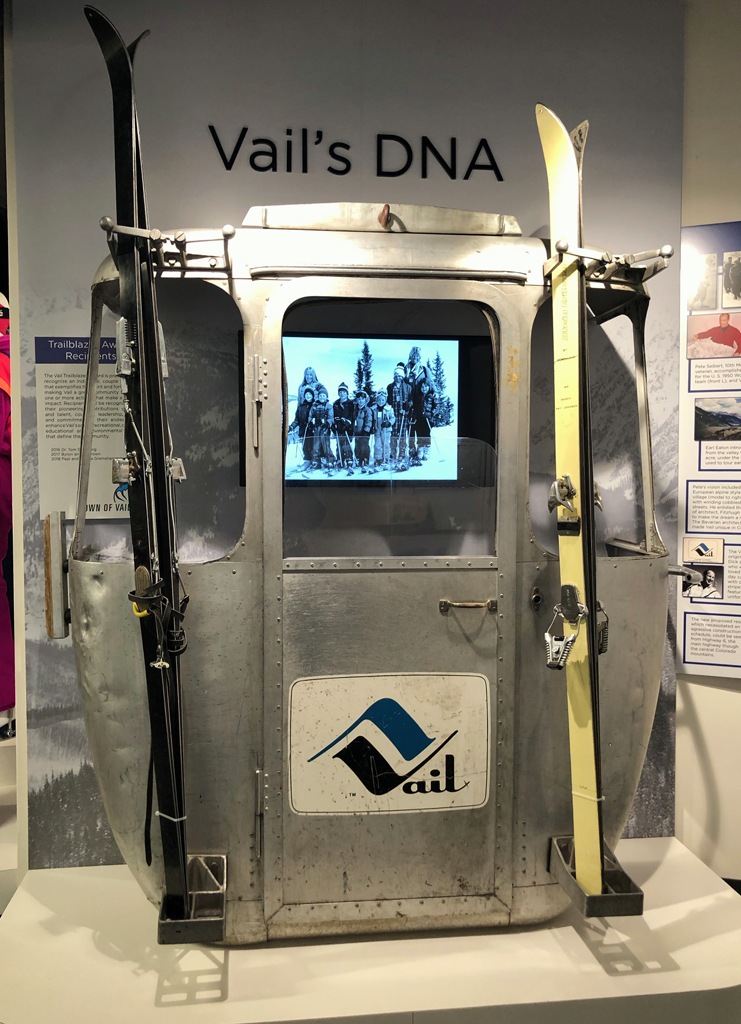 Check out these old skis and boots: 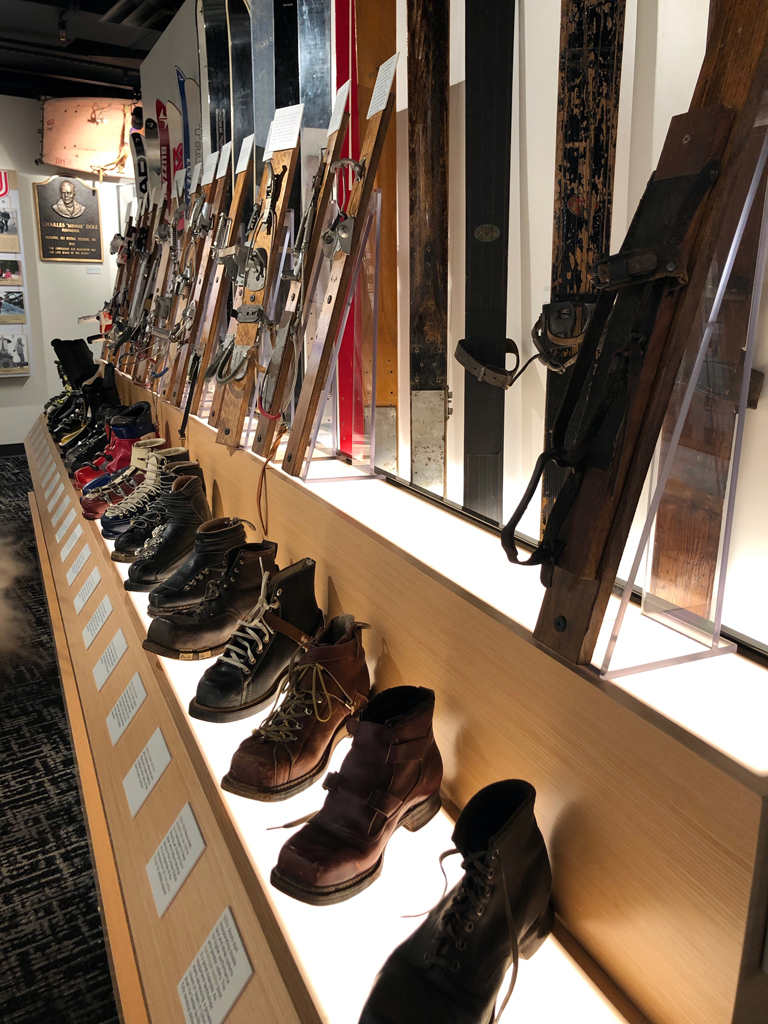 And how functional is this ski dress? 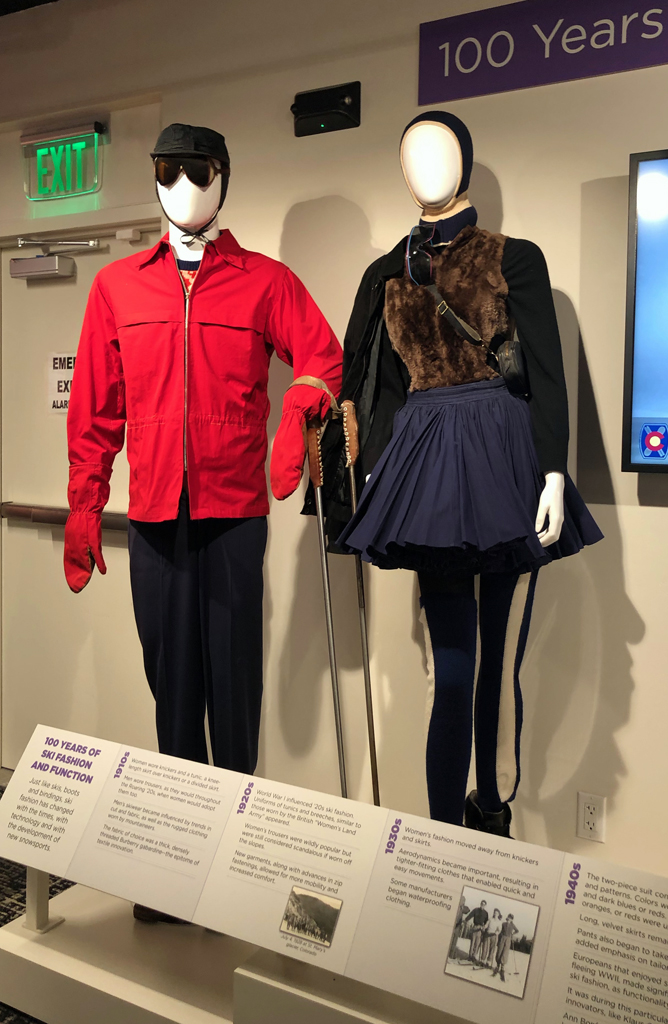 Snowboards, of course, are also represented: 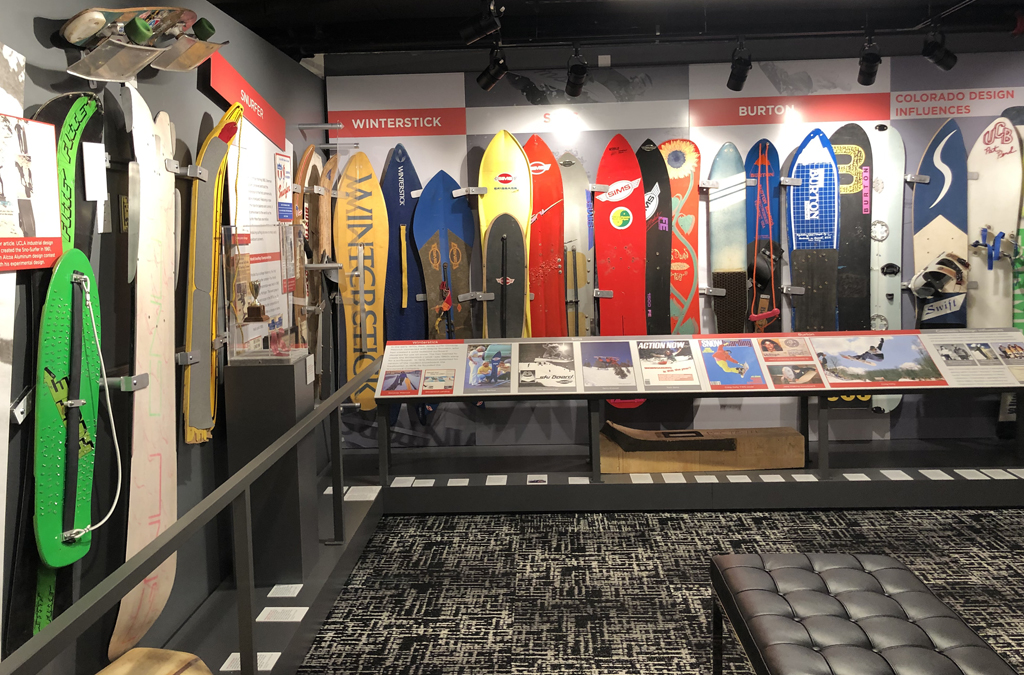 Here’s a picture of an early snowboard. Notice the rope on the front to guide it, with a stick to drag along behind like a rudder – think canoe paddle. 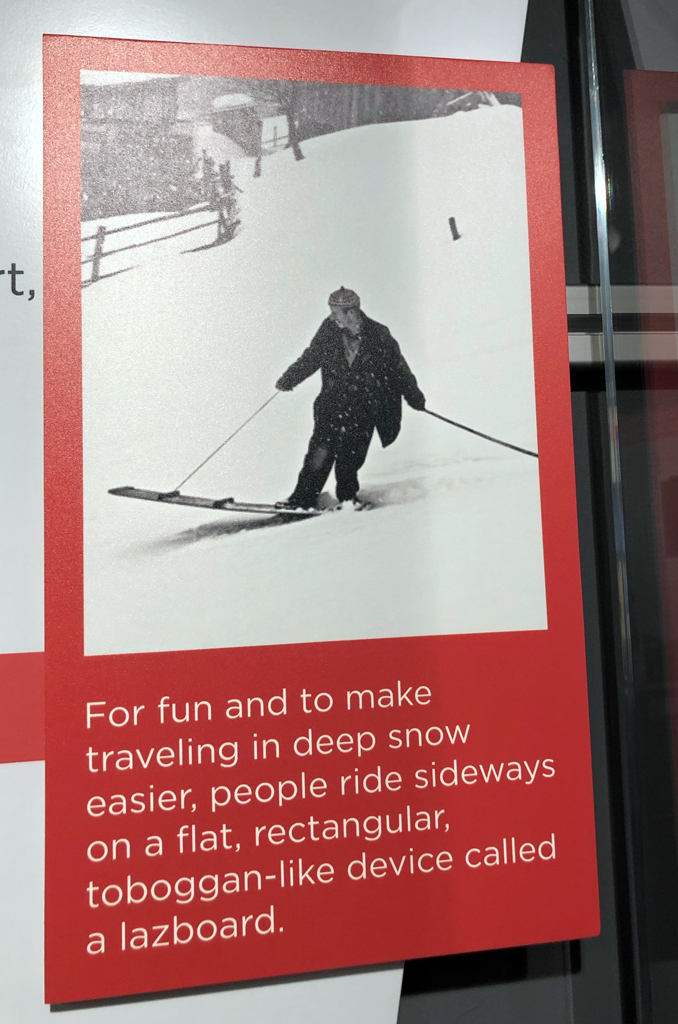 There was lots more to see in this small but well designed space. I learned more than I thought I could about snowsports in a very short while, not to mention a good intro to the 10th Mountain. My hat’s off to them! 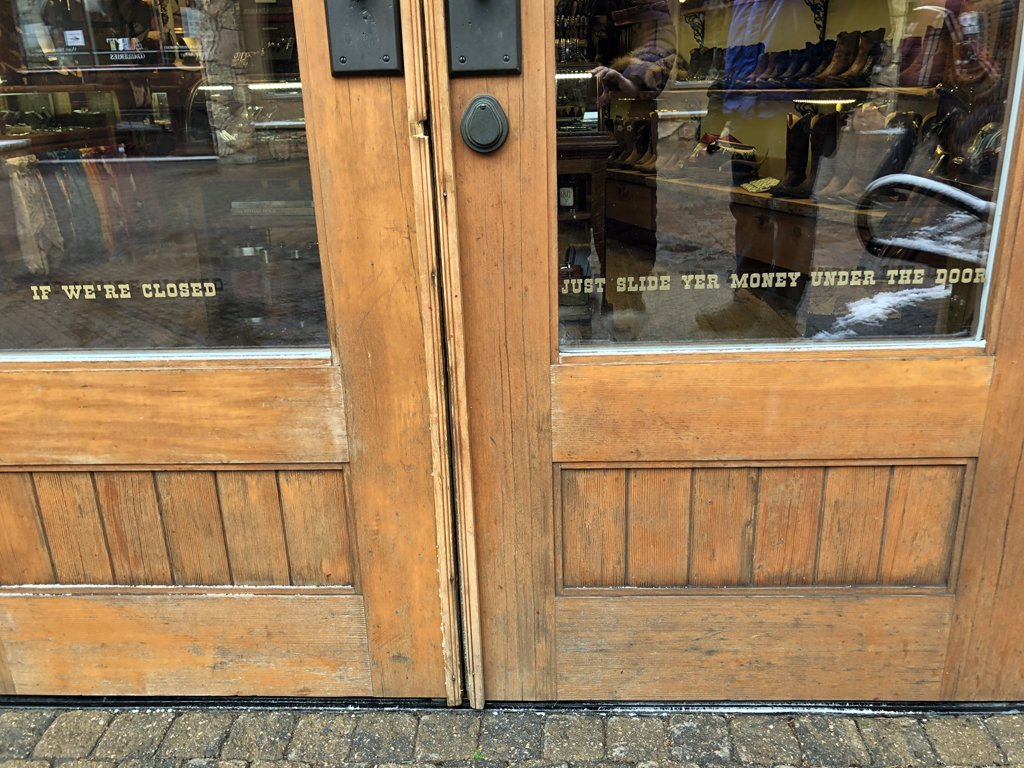