Do you have your copy of

It’s now on the (virtual) shelves at Amazon!

I know you’ve seen the PFNAR: the photos at the end of each blog post that are unrelated to the topic and have no explanation. Where did I take the pictures? What motivated me to take and post them?

Did you know? THIS BOOK IS A PART OF A SERIES – DO YOU HAVE THEM ALL?

Now that Lent is in full swing here in Bavaria, I’ve discovered that the Germans long ago found a way to cope with the self-denial that is, or was, typical of this time of year.

Even though Lent, for monks, meant fasting and other acts of deprivation, it seems that doing without beer was not part of that deprivation. In fact, apparently to make up for the food they weren’t eating, so the story goes, they invented even stouter beer to keep them going through these rough times.

And so still today many Munich area breweries produce a seasonal beer this time of year that is typically about 25% stronger than the regular fare (7.5% alcohol vs. 5.4%). The German word for this is Starkbier, which literally means “strong beer.”

It’s not enough that they produce this seasonal beer. The Munich area goes one step farther and conducts a Starkbierfest, or Strong Beer Fest. I’ve read a description of this Fest as “Oktoberfest without the tourists.” However, there is an important difference between the two.

You probably know that, at Oktoberfest, many breweries haul barrels of beer, chairs, tables and kitchen equipment to the Theresienwiese, which is the fairgrounds for the fest and other events, set up a huge tent, and serve the visitors therein. For Starkbierfest, on the other hand, visitors must visit the individual breweries; there are no beer tents from multiple breweries all in the same location.

If you want to be present at the the tapping of the beer barrel at any of the breweries, I’ve learned you should make reservations in January or so. However, there is usually room enough in the restaurants or beer gardens at each brewery to find a place on the spur of the moment.

My husband and I stumbled upon this Starkbier and the Starkbierfest information when we went to dinner at the Paulaner Bräuhaus (Paulaner Brewery) in Munich in the past couple of weeks. 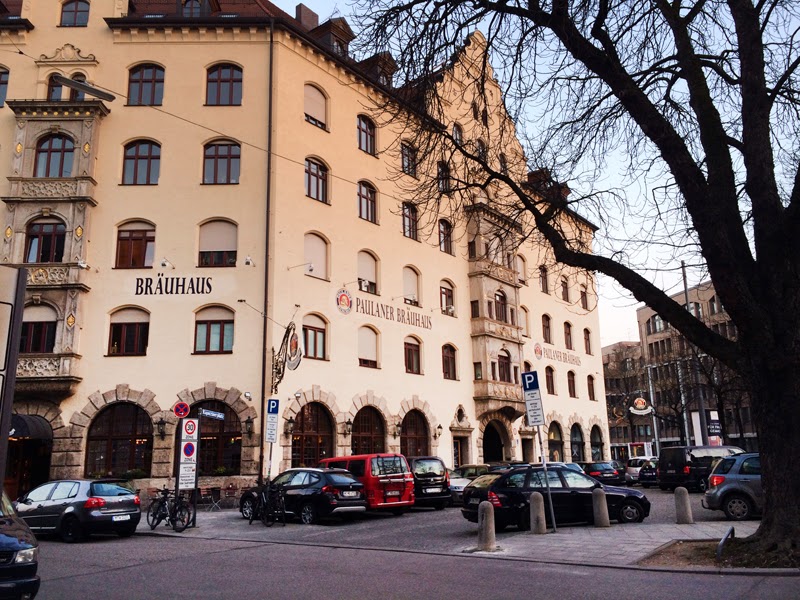 It’s the original brewery for Paulaner beer, one of our favorites in Munich, and an absolutely beautiful place with great service. Although I don’t have a photo of the beer there since I didn’t take my camera that night, I have a couple of iPhone shots of our meals. Here’s the veal roll my husband had: 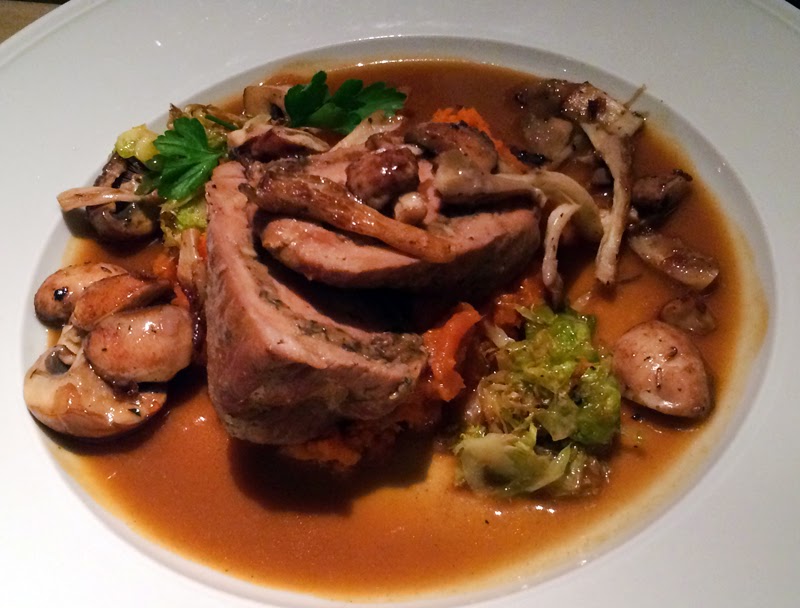 And the veal schnitzel I had: 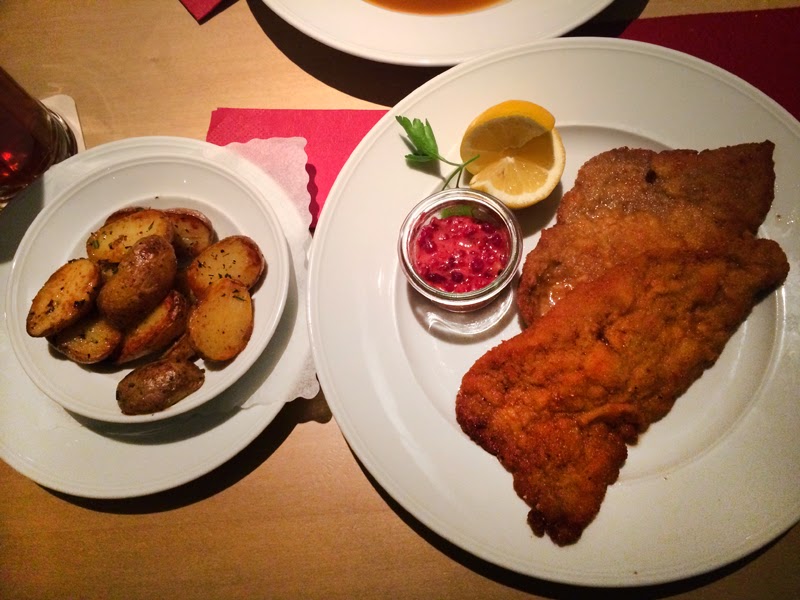 Last week we visited the Augustiner Keller (Augustiner Cellar), which is operated by the people who make the wonderful Augustiner beer. Notice the name is not brewery, but cellar. Beer cellars are different from breweries and beer gardens. Beer cellars started out as actual cellars dug into
the hillside where brewers kept their beer during the winter for summer consumption. In the summer, most beer cellars had a small outdoor area nearby where they sold beer and cold food while the weather was nice.

Storage and refrigeration have come a long way from underground cellars, so places like Augustiner Keller operate essentially as beer gardens and may even have indoor restaurant space. In addition, Augustiner Keller’s location has been absorbed by the city growth, so it’s now centrally located in Munich. In fact, it’s only a few blocks from the train station. 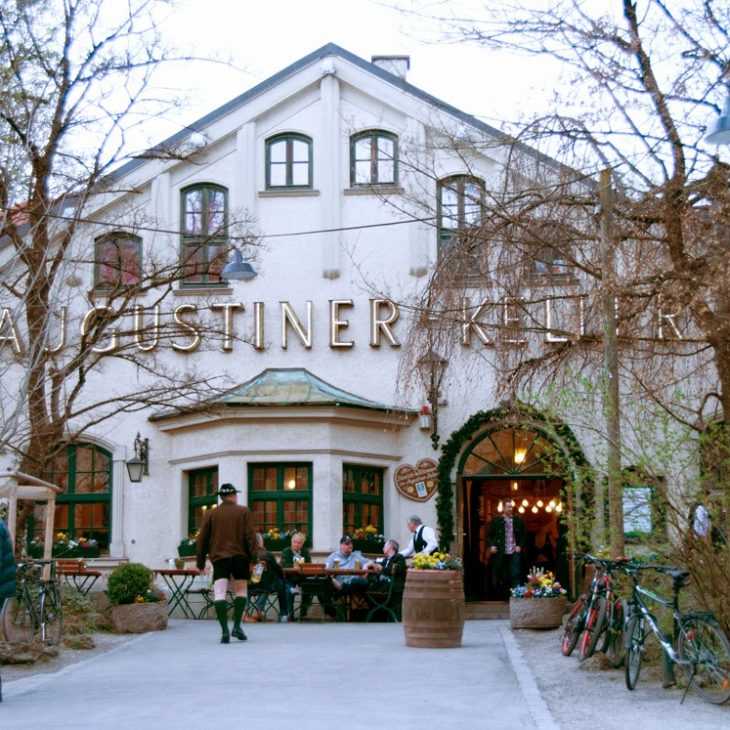 Behind this restaurant building is a HUGE beer garden! 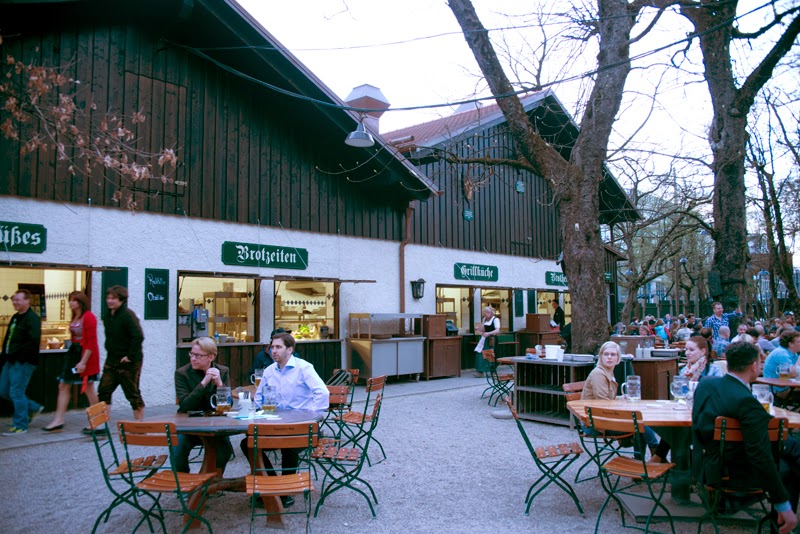 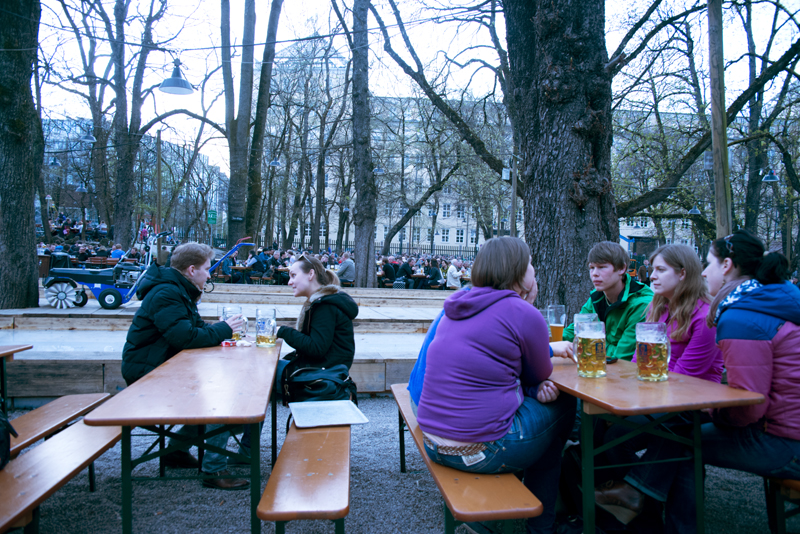 The third place we have tried the strong beer this year is at Airbräu, which admittedly isn’t one of the big breweries in Munich. It’s a big restaurant and beer garden for travelers at the airport that makes its own beer. A great place to hang if you are at the airport, but it’s more like a microbrewery than an institution. 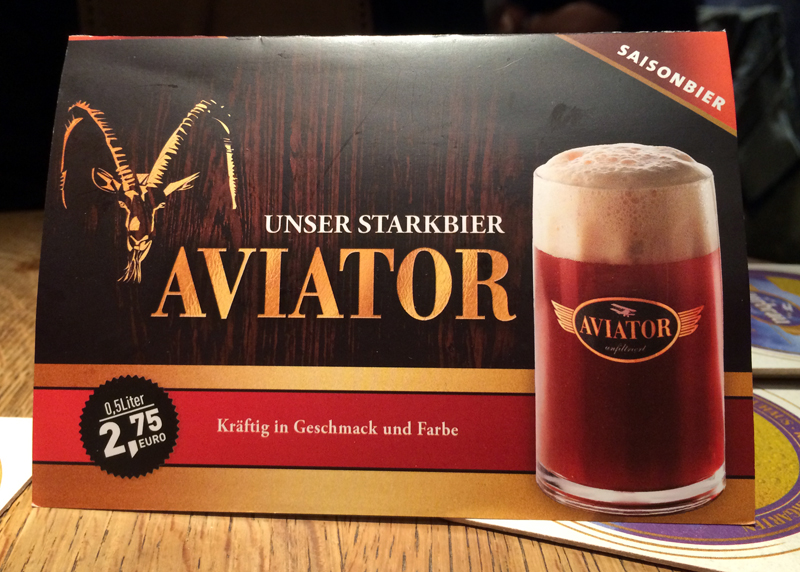 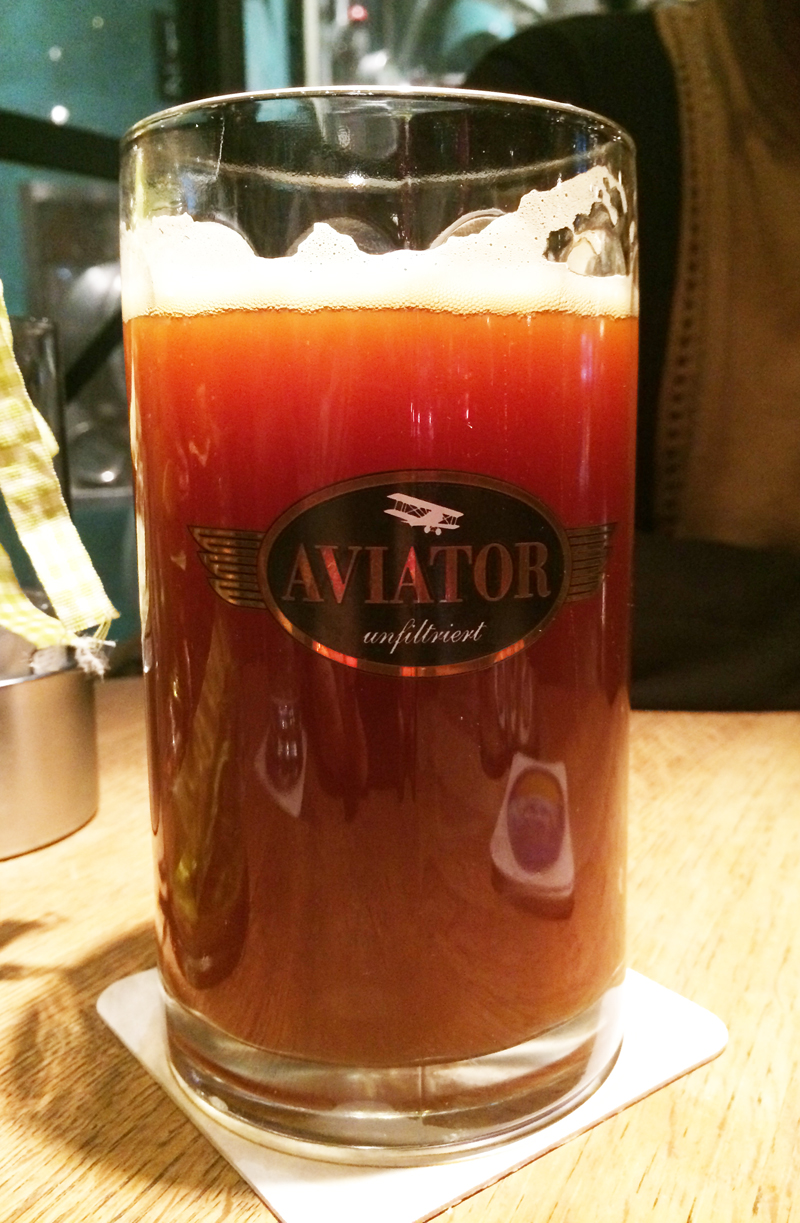 You’ll notice the name of Airbräu’s strong beer is Aviator, which is appropriate. But it follows an apparent tradition of naming the strong beers with the ending -ator. Here is a list I pulled from the  Destination Munich website where you can see some of the names of the strong beers in Munich and other parts of Bavaria. I’m sure some of these were named under the influence of the beer in question:

More notes about German beer:
German brewers have to follow strict regulations about what goes into the beer. These regulations started out in 1516 and were called the Reinheitsgebot, which translates as “the purity laws”. Basically, the only ingredients allowed in German beer were barley, hops and water. Note that the brewers could use only naturally occurring yeast.

Therefore, the location where the beer was brewed became very important as to what kind of yeast ended up fermenting the beer. It is not only the geographical location but the specific location at the individual brewery that becomes important. For example, lager beer was made in the Lager, or outdoor storage room or cellar. And different yeasts ferment at different levels in the vats. With our lager example, the yeast lives at the bottom of the vat, whereas ale yeast ferments at the top.

Of course these regulations have evolved over the years somewhat, but the only three additional ingredients allowed now are wheat, yeast and sugar — and only then under specific circumstances. So German beer is so good partly because no preservatives, carbonation, extra coloring or artificial flavoring is allowed. It’s amazing, in the face of that, to realize how much variety can be achieved through location and methodology. A brief rundown on the German beer types can be found on the so-called German Beer Institute website.

So lift your glass of strong beer to get you through Lent til Easter! Prost! 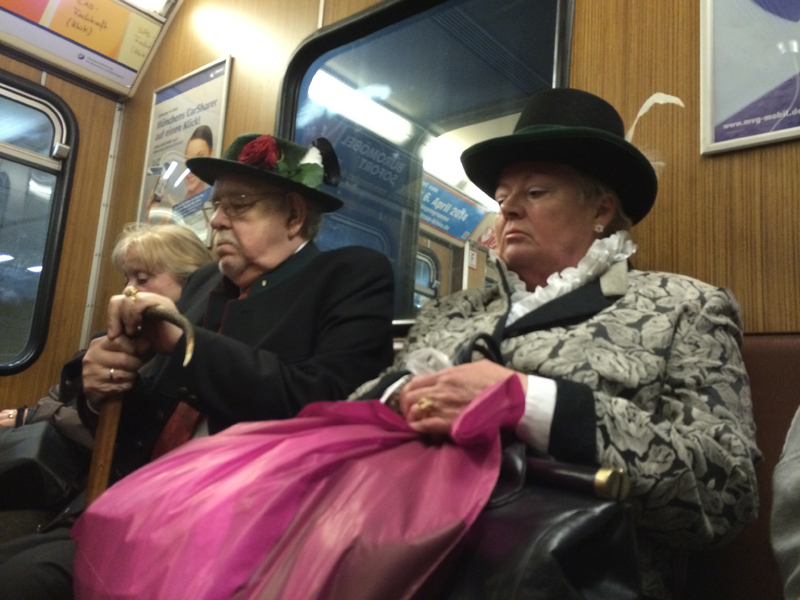