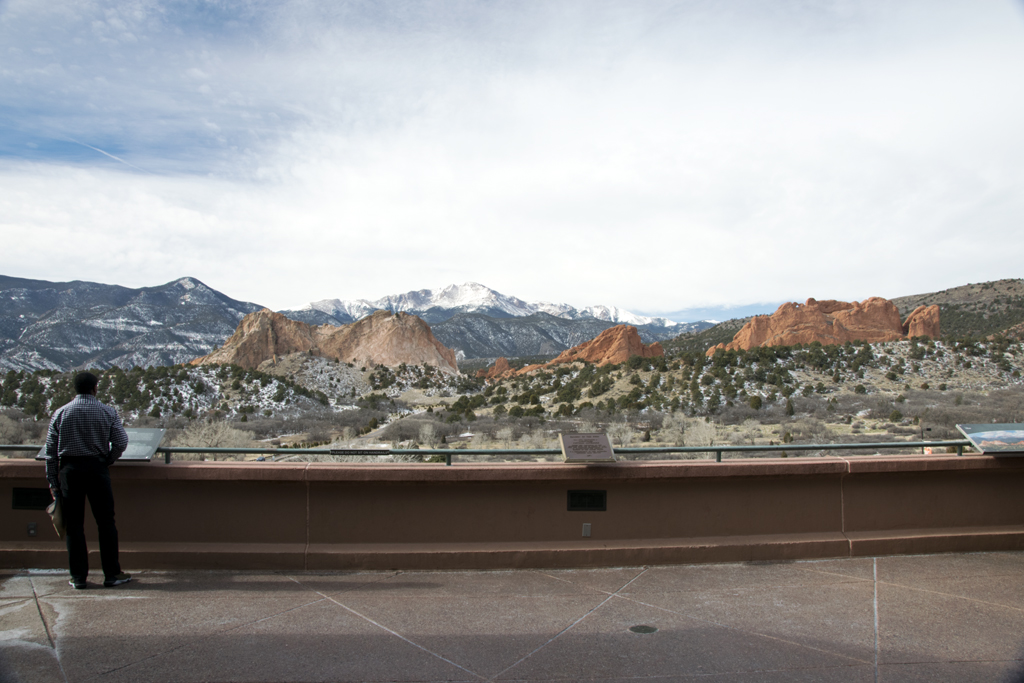 Have you bought your copy of

PFNARs are the photos at the end of each blog post – the pics are unrelated to the blog and have no explanation.

DO YOU HAVE ALL THE PFNAR BOOKS?

Along about 65 million years ago, a compressed layer of sand, now sandstone, was pushed up by the forces that formed the Rocky Mountains. That sandstone shows up as red, rock “fins” here and there in Colorado on the eastern side of the Rockies. This particular site of the upheaval is known as Garden of the Gods. FYI, this red rock has been quarried from other sites to build many things here in Colorado, including buildings at UC Boulder.

My husband and I visited Garden of the Gods recently, which is a park located in Colorado Springs. We first stopped at the Welcome Center, which has nice restrooms, a wonderful exhibit inside of local nature, and a snackbar/cafe. 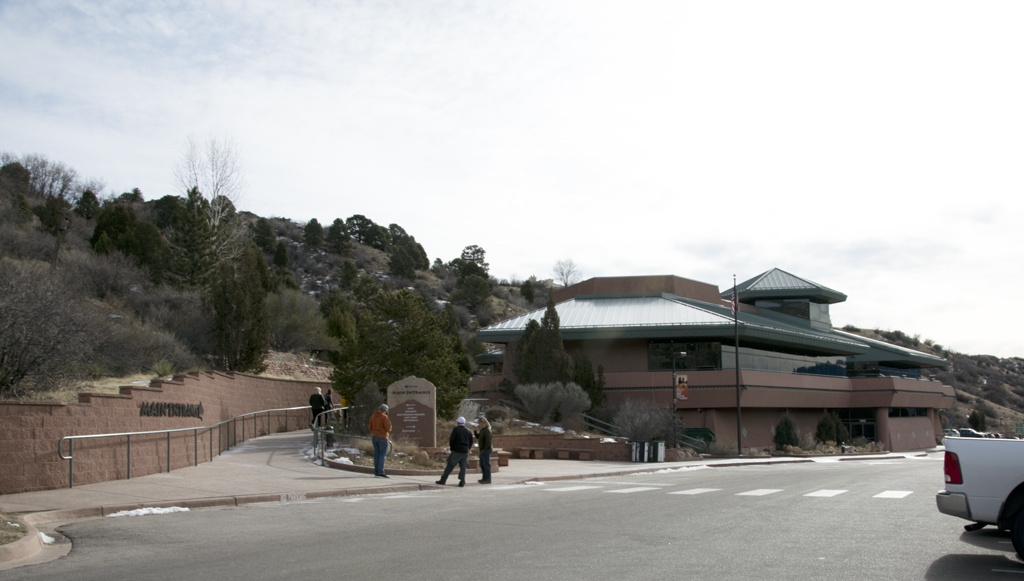 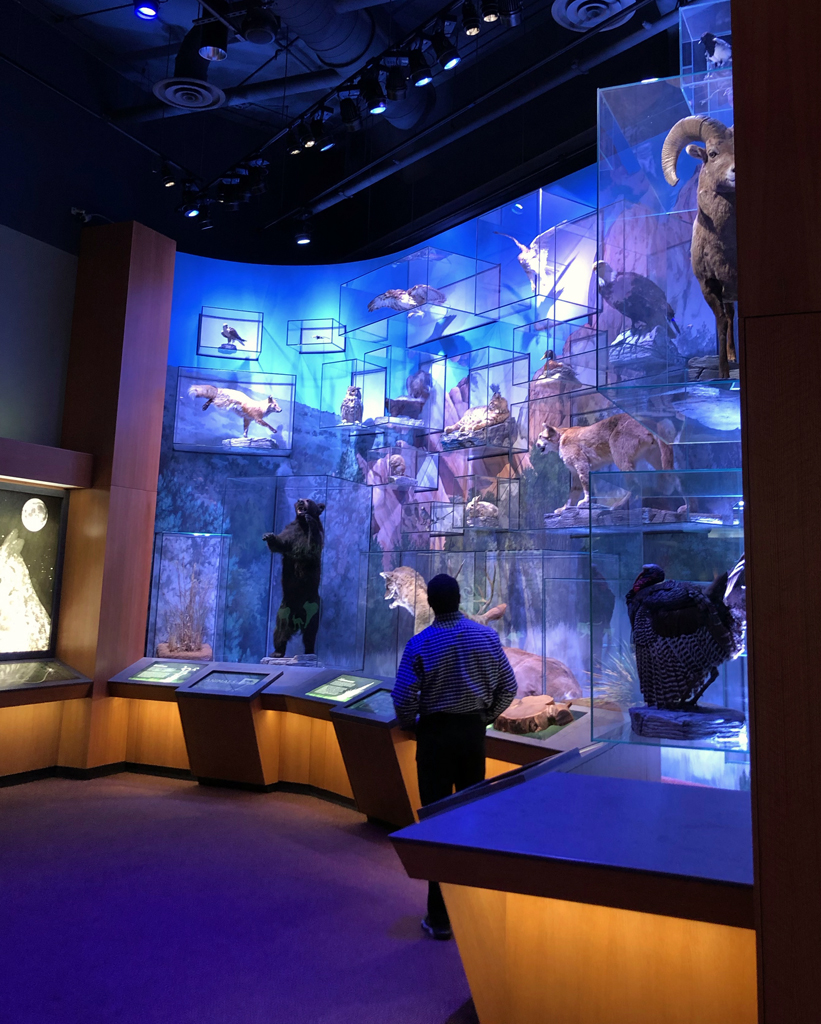 And that particular day, there was a volunteer with pelts and horns you could touch from locally native animals. I touched. 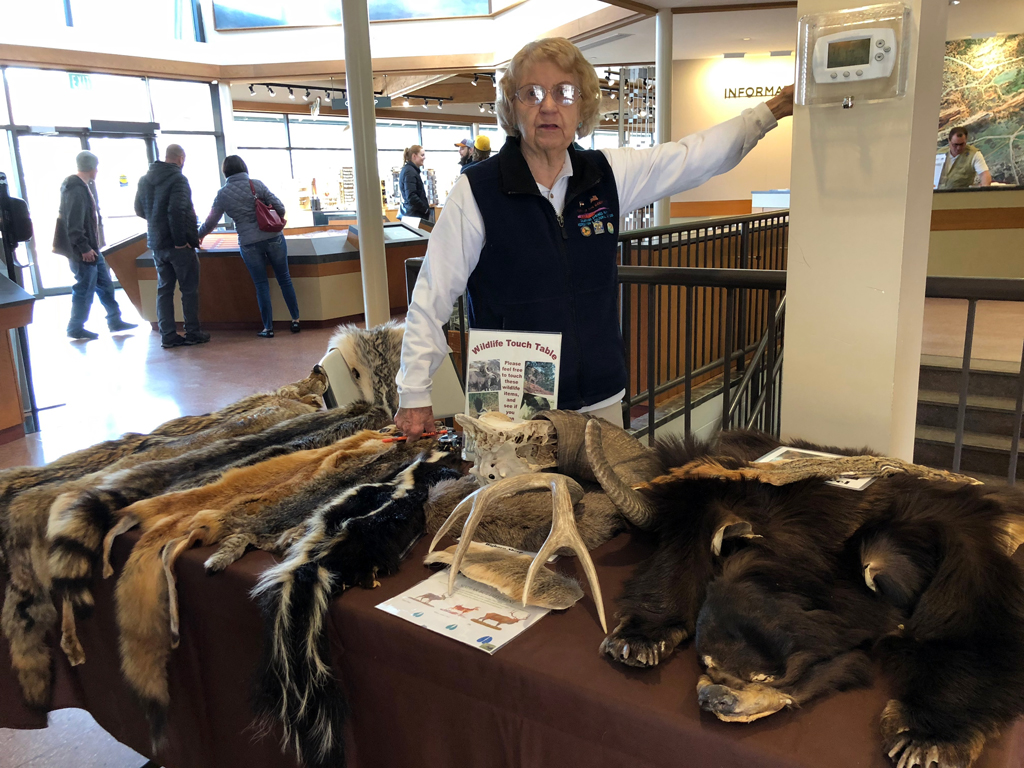 The bear was the most surprising – its fur was very wiry. Also, she said most of these animals were roadkill so some had a lot of holes.

I liked the 3D map – it really gives you an idea of how spectacularly different these red rocks are compared to the surrounding mountains: 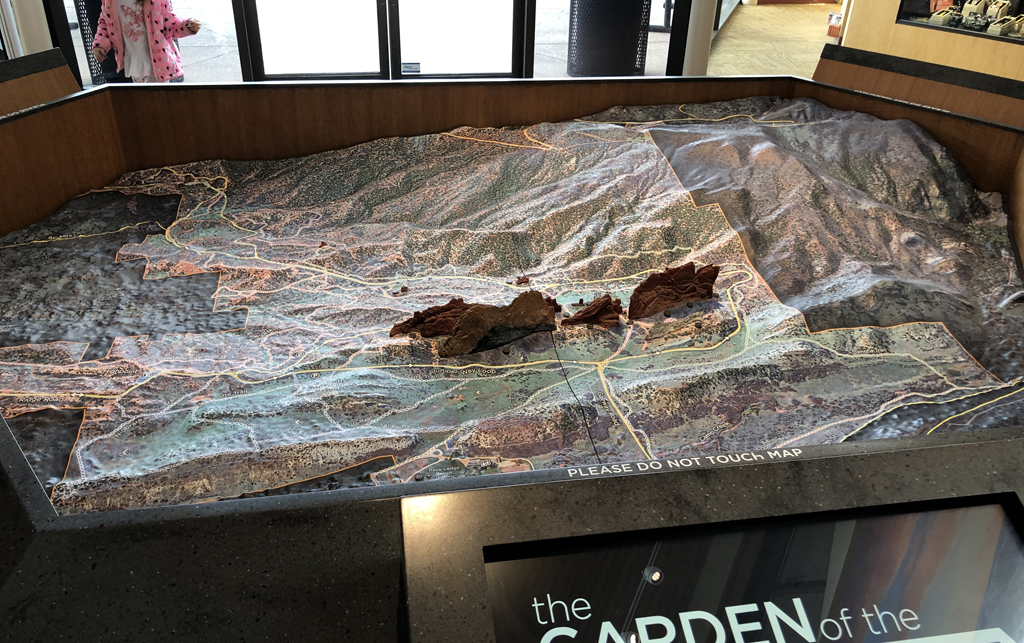 Just past the map and out the doors is a wonderful patio with a full view:

In 1879, a railroad man from Ohio by the name of Charles Elliot Perkins bought 240 acres of land where these magnificent rock formations reside. He was going to build a summer mansion, but decided to leave the natural formations alone because he loved them so much. He also added more land around the original plat.

In 1909, his family donated the entire 480 acres to the City of Colorado Springs, with the contingent that it always be free and open to the public. And so it is.

There is a loop road around the park that we drove: 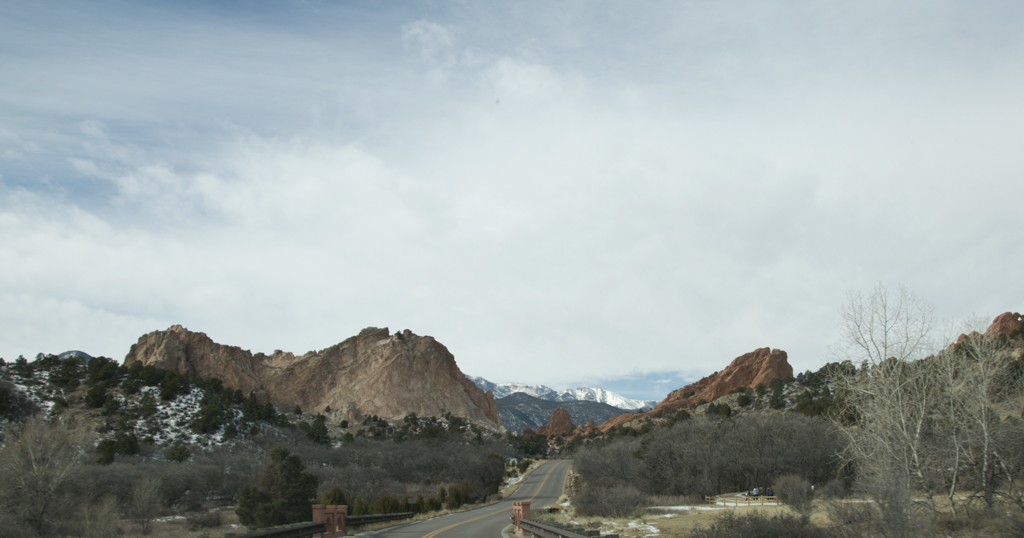 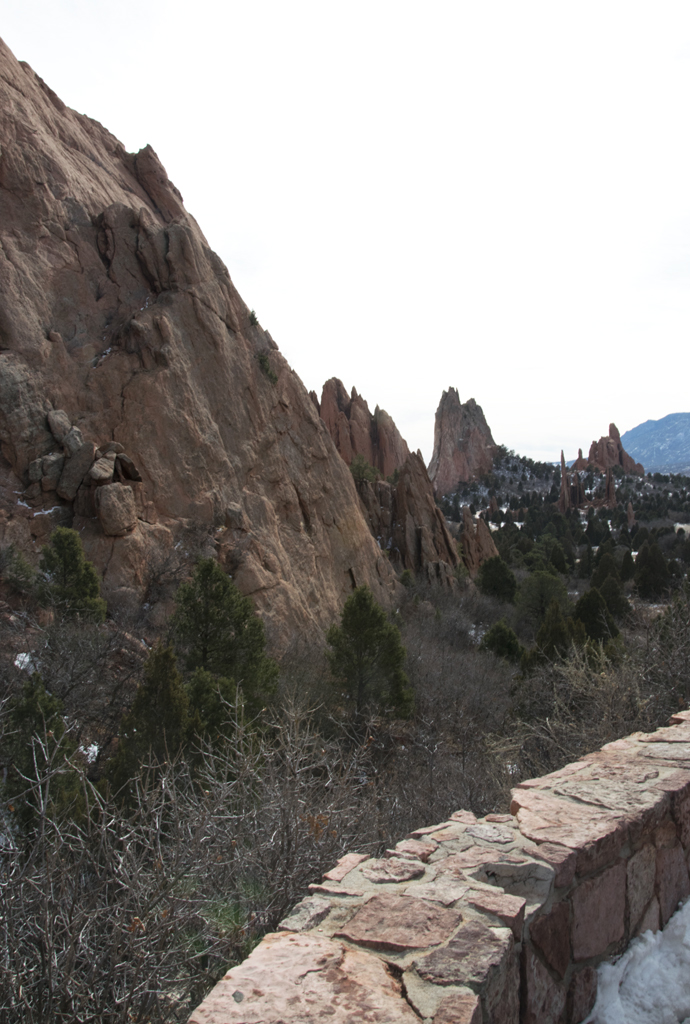 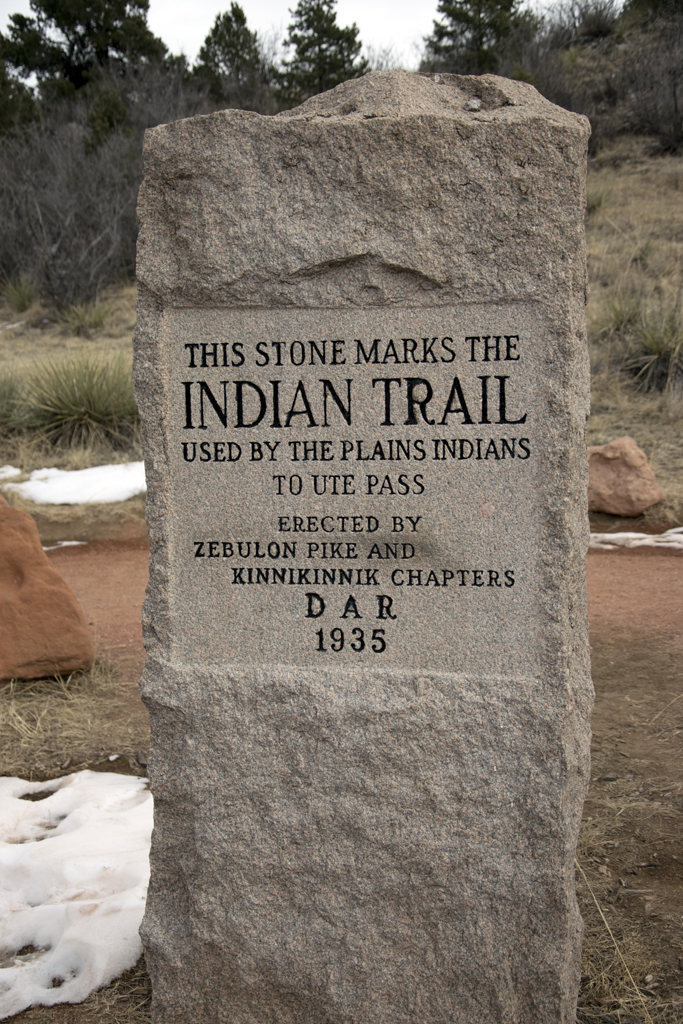 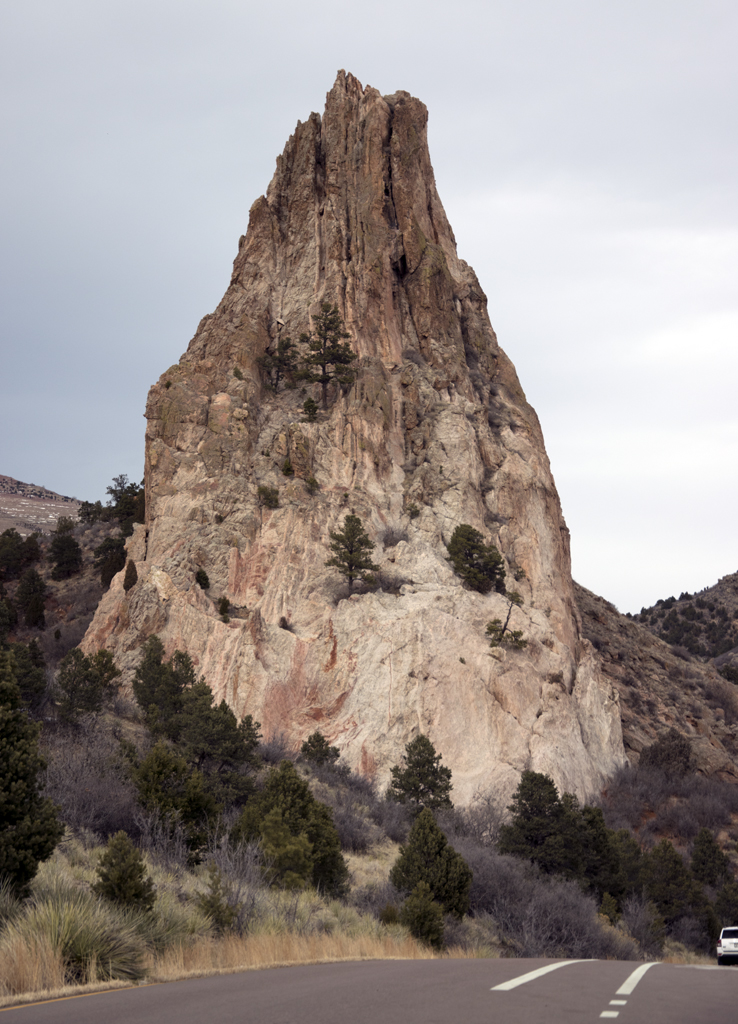 Eventually you’ll come to the famous Balance Rock. Here’s a shot of it, along with some violators of the rule not to climb on the rocks without training, gear and a permit: 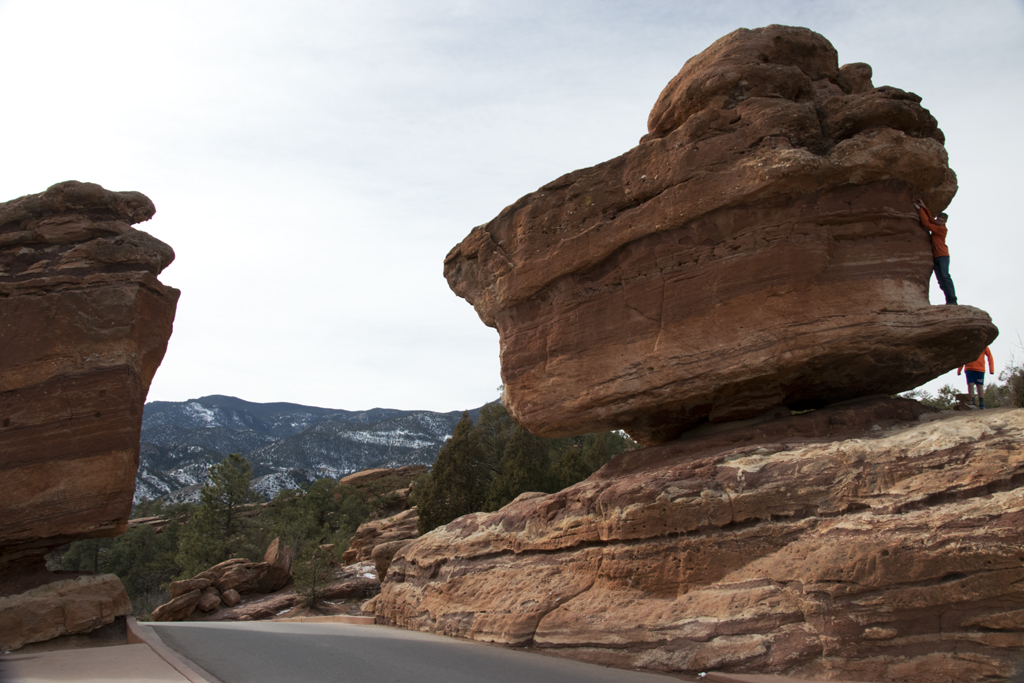 We did stop in a couple of places and made an effort to hike the trails. We didn’t go very far on them because we hadn’t dressed for that, but it was fun and the view was great. Below are the Kissing Camels formation. See them? 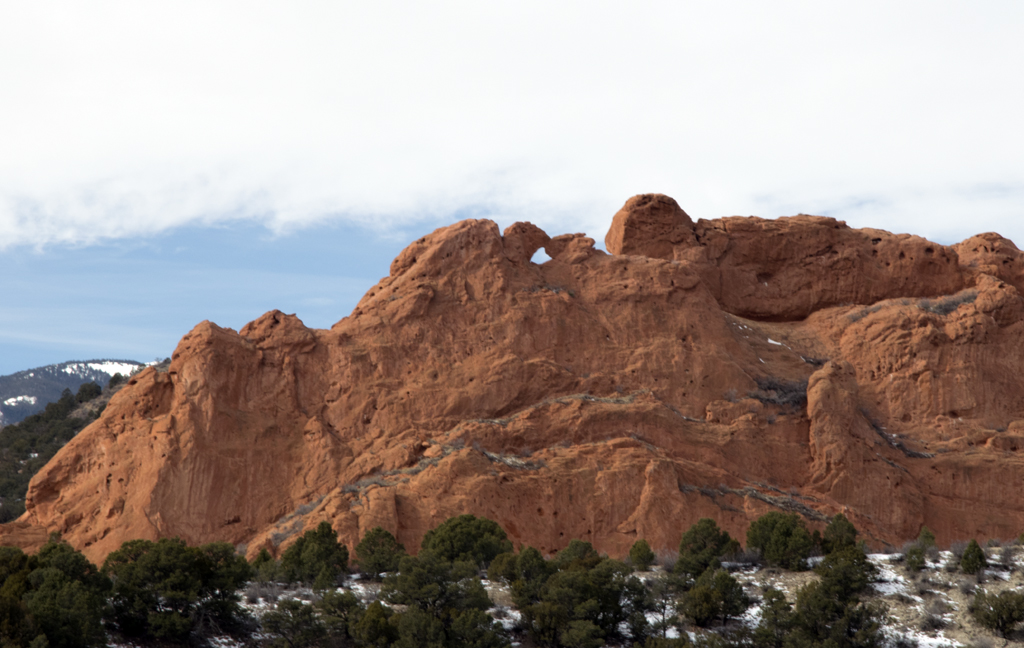 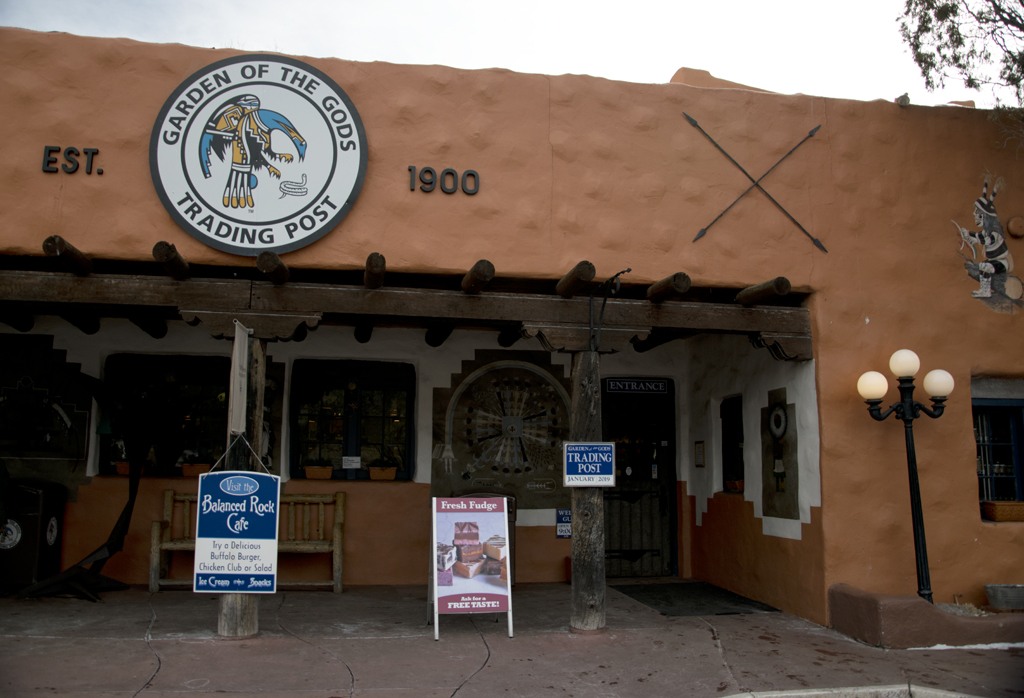 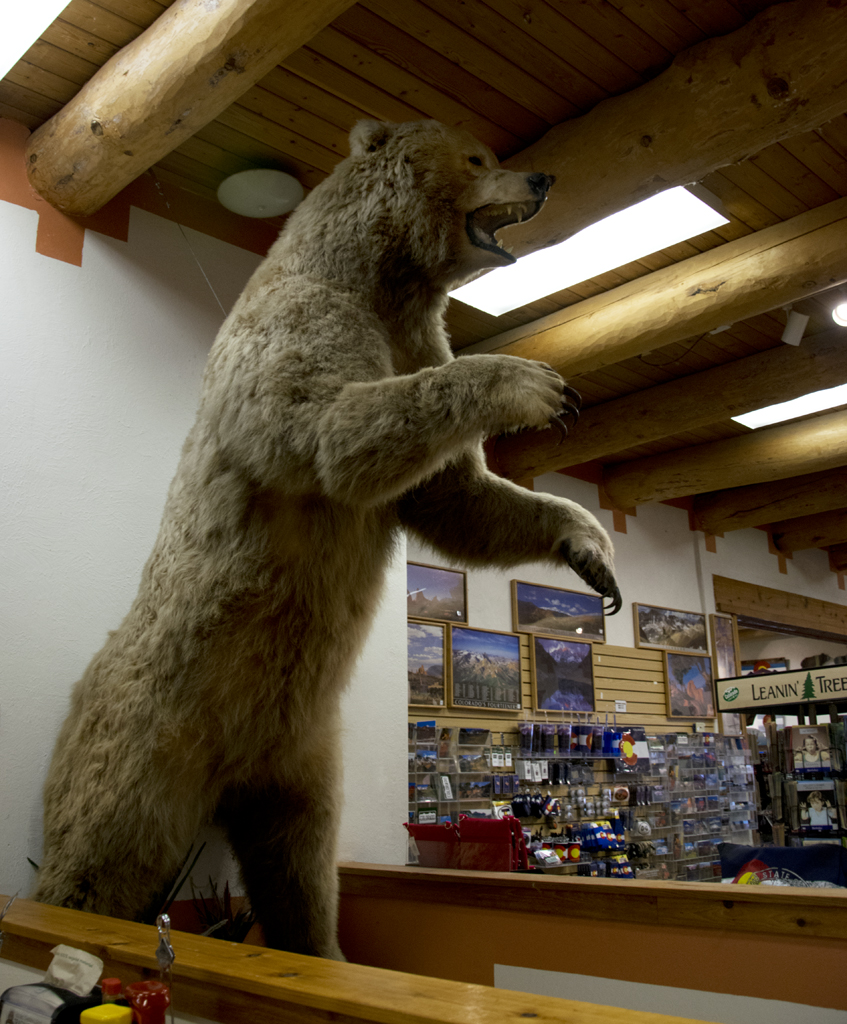 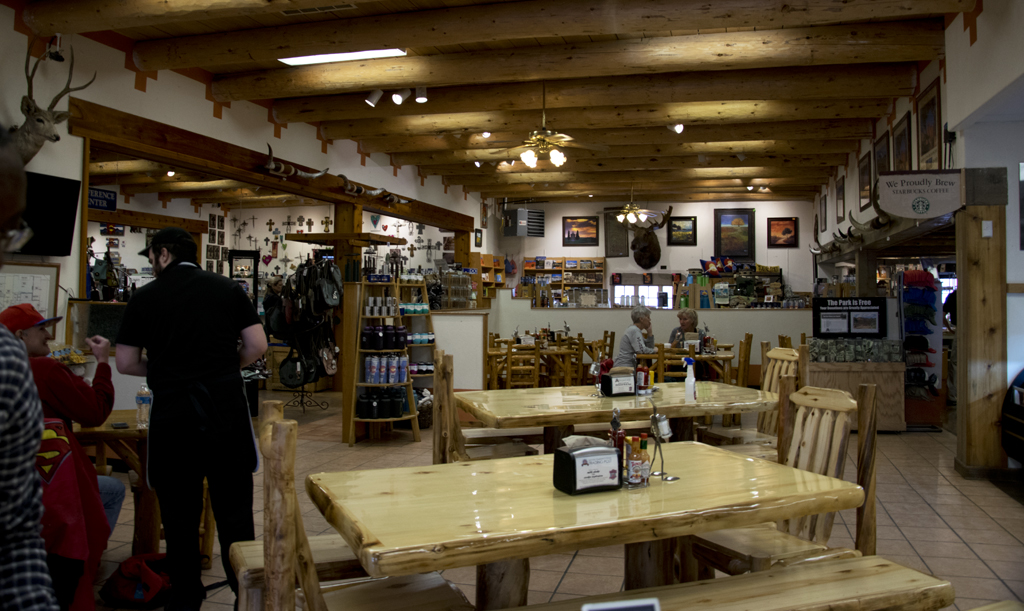 Actually, the burgers and fries were quite good. Plus they had scads of souvenirs and local gifties. I’d already bought my pin at the Welcome Center, though. Also, that guy in red on the left above with the Superman jacket told us it was his birthday. He also had a Superman hat, Superman belt, Superman shoes and Superman shirt.

After lunch we drove once more around the loop and stopped at the place where you can walk among the thickest part of the rocks. First, I saw this from the parking lot. I can still hear the “Bonanza” theme song: 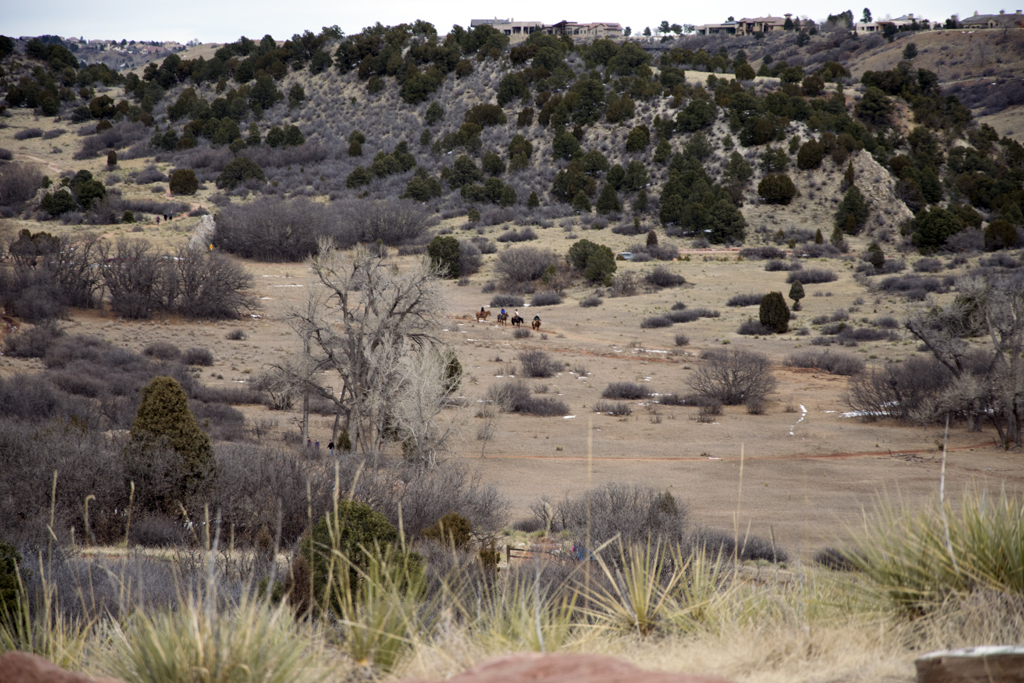 Here are some shots I took as we strolled the paved sidewalks through the rocks. Also, someone had the bright idea of climbing through the gap between formations. I didn’t do so well; I will NOT bring the Nikon on future hikes! 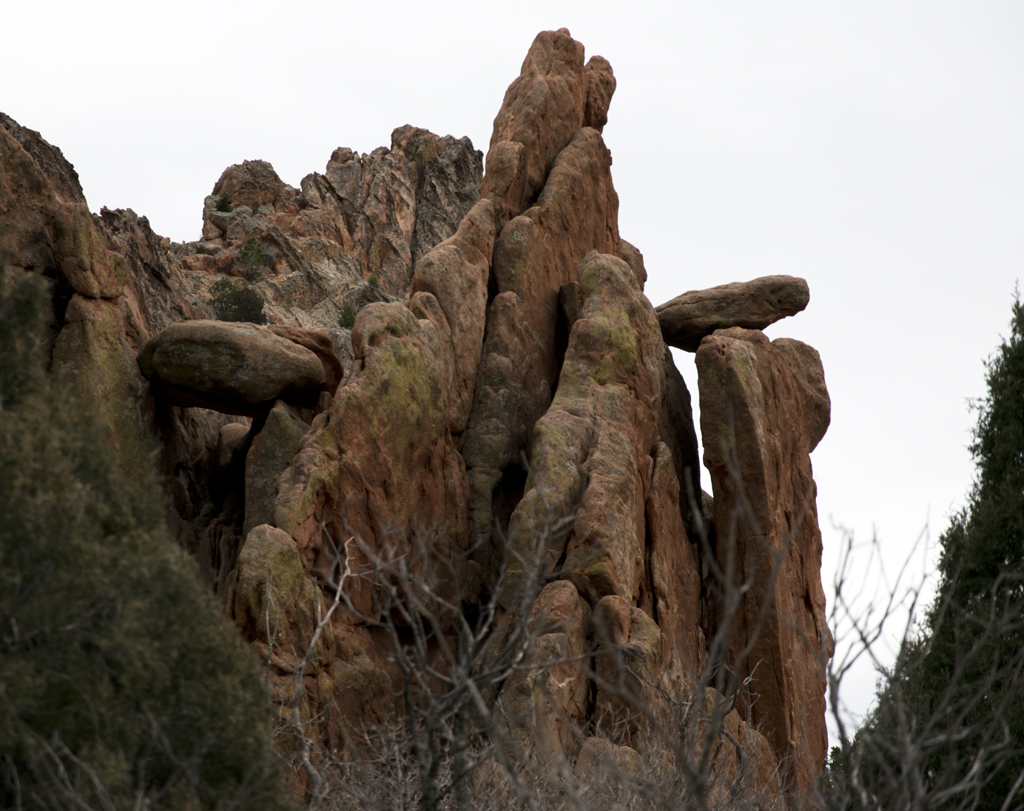 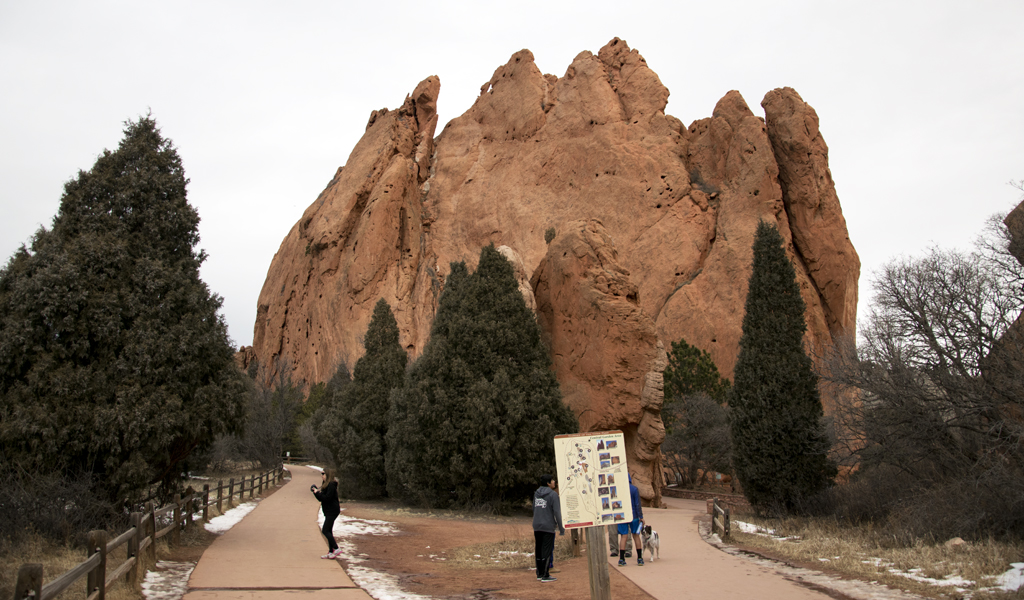 On this very tall rock is a plaque about the park’s being donated to Colorado Springs. The plaque is probably 6 feet tall: 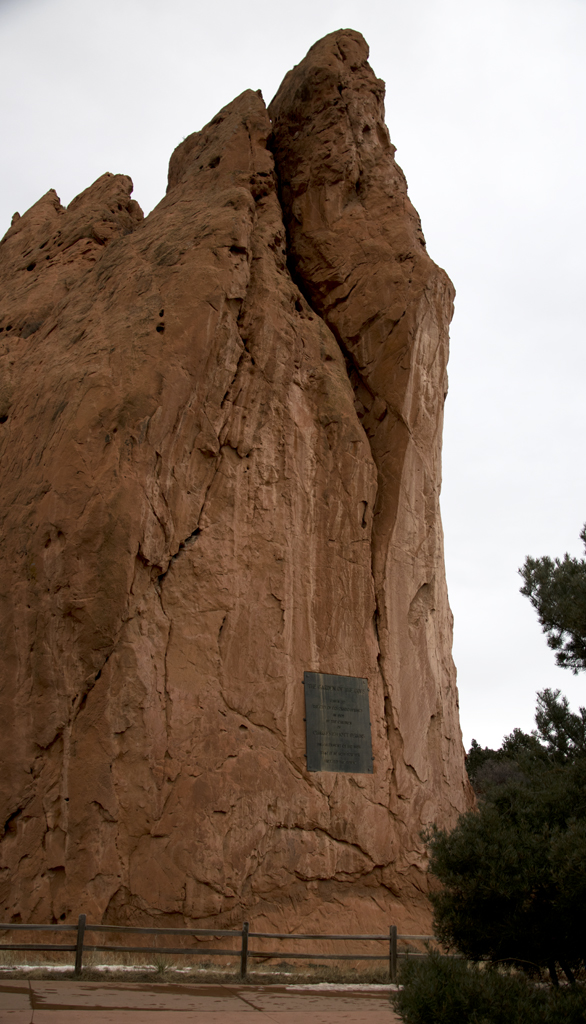 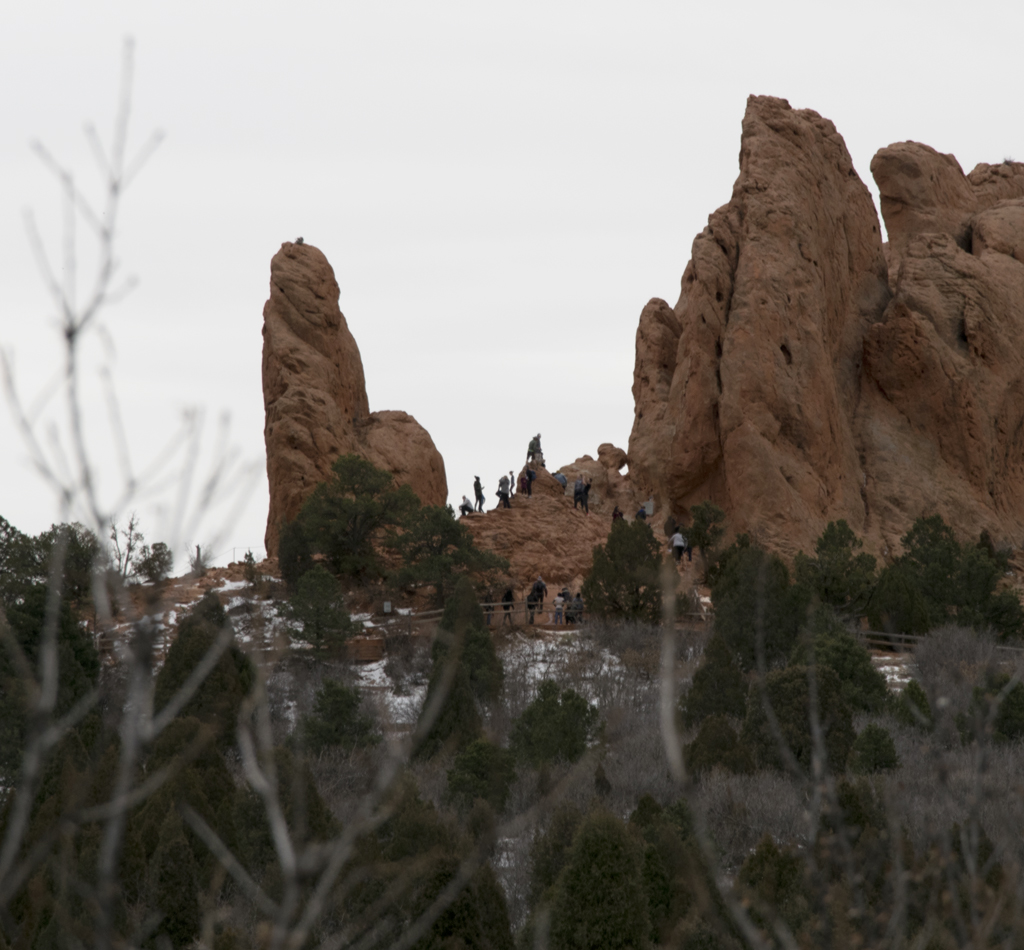 And here is a shot with the rocks just to my left: 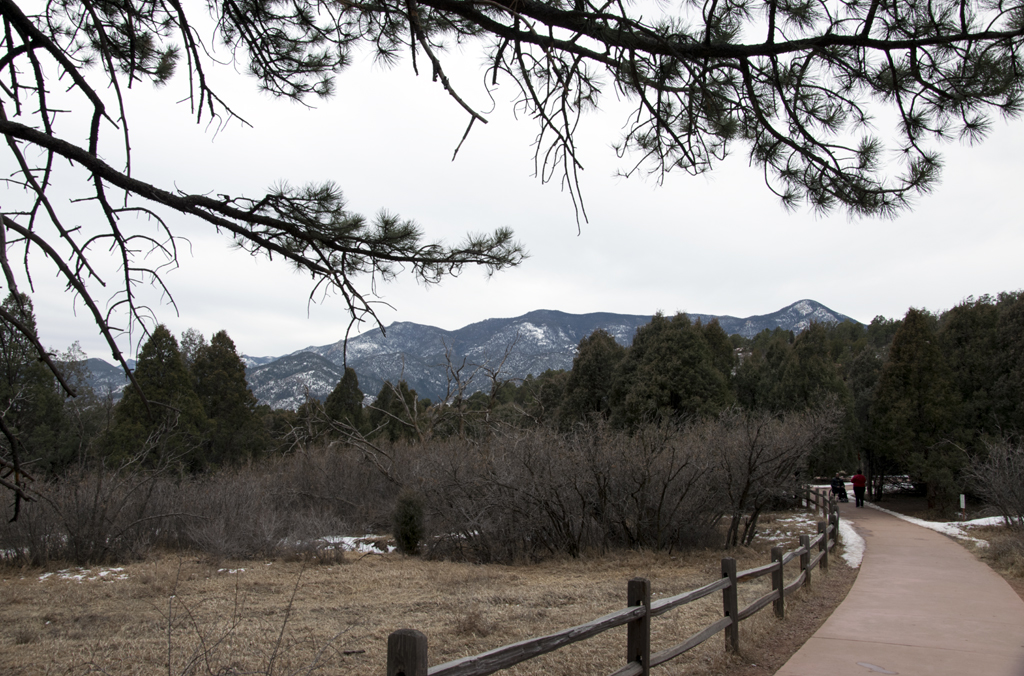 Although the light wasn’t very good that day, it was a great daytrip for a Sunday when not much else was going on. I encourage you to make this stop if you’re anywhere in the vicinity of Colorado Springs, or even Denver. It’s completely free, parking and all, and it’s well maintained and tended by caring volunteers. And they have good pins! 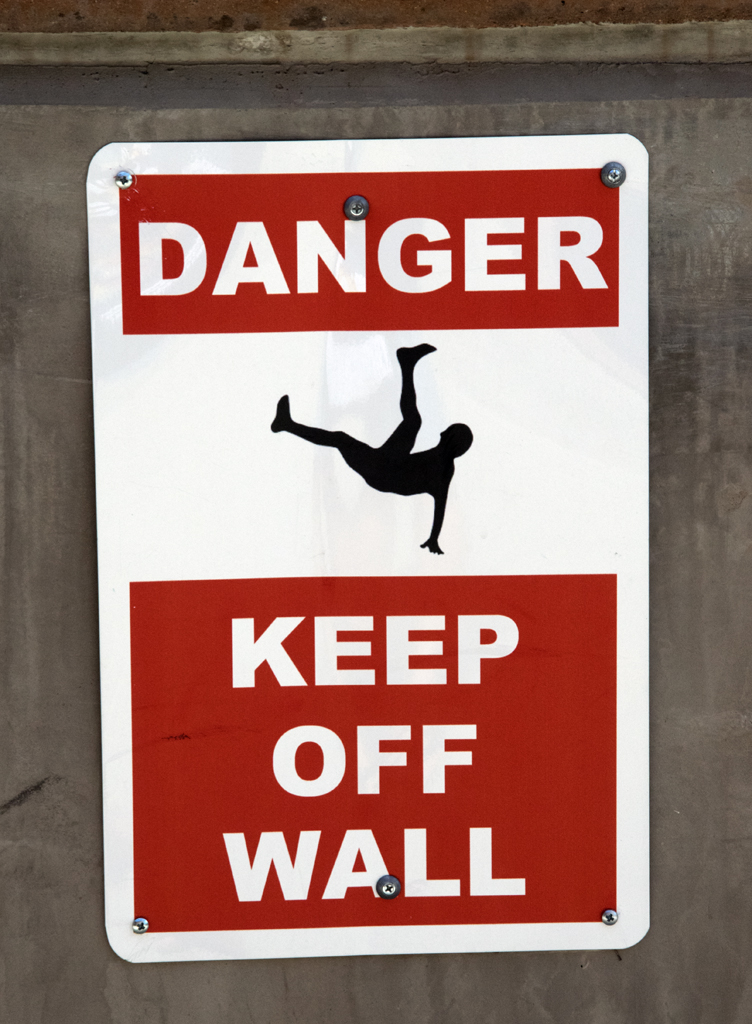