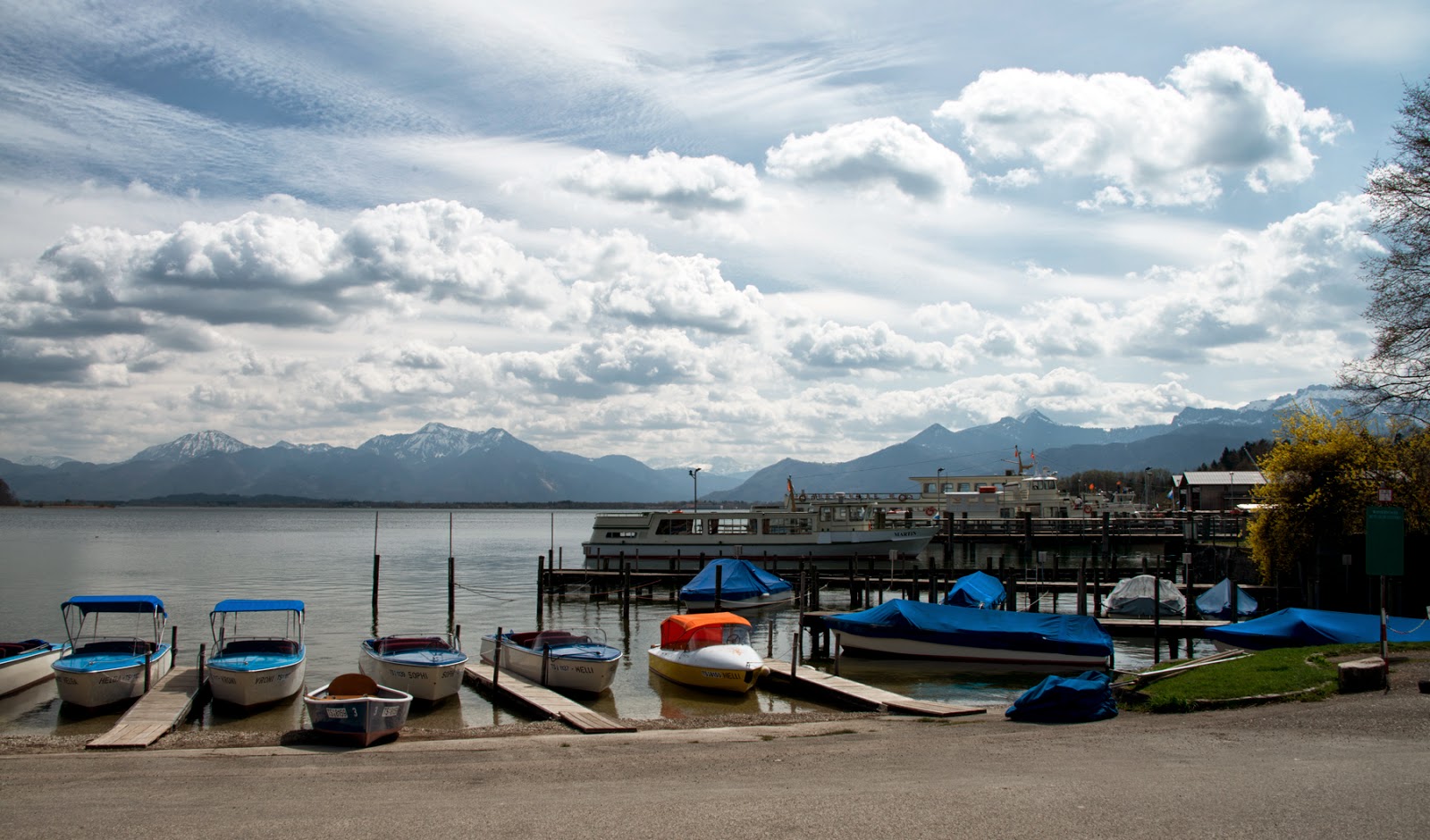 COLLECT ALL THREE of my

Photos for No Apparent Reason (PFNAR)

Yesterday was just the most marvelous experience! For years I’ve been wanting to visit Chiemsee (pronounced “keem-zay”), a lake in the foothills of the Alps in southeast Germany. Well, this week I did!

The lake is just over 30 square miles in area and lies about 1700 feet above sea level. There are a few islands in the lake, one of which bears Bavaria’s King Ludwig II’s palace called Herrenchiemsee, which was intended to be a copy of Versailles Palace in France. You’ll remember he was Bavaria’s “mad” king and the one who built Neuschwanstein and Linderhof.

My husband and I left Munich about 10:00 a.m. and drove for just over an hour on uncrowded autobahns through a beautiful natural recreation area to reach a quiet town called Prien right on the lake. We found a handy parking space and paid a ridiculously low price to an jolly older man who would make an entire blog post in himself. He actually made me re-park my car in the unmarked gravel lot because it was too far away from the car next to me. I moved it about six inches.

Then, we walked the short distance to the waterfront. 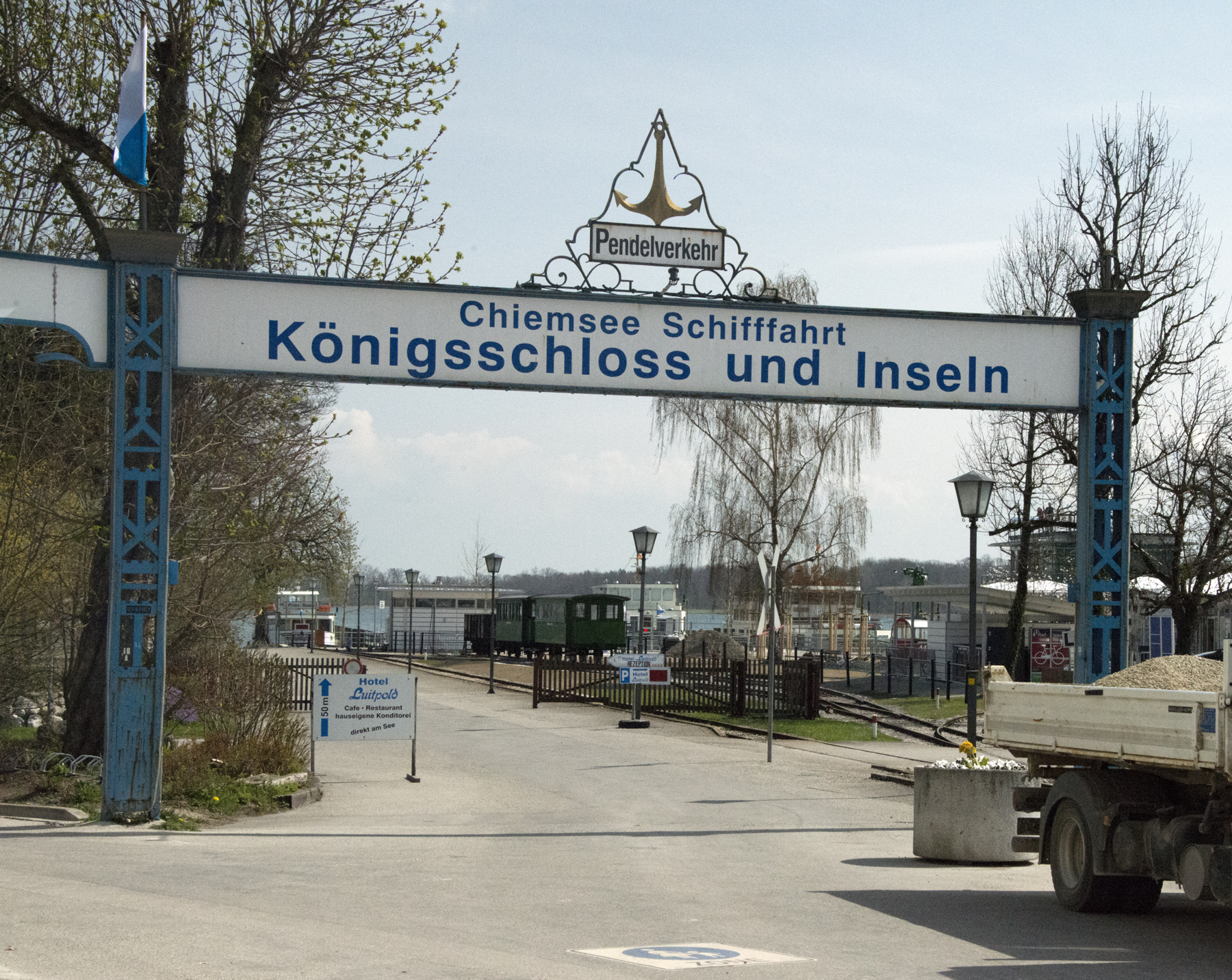 We were famished, so we stopped here for lunch: 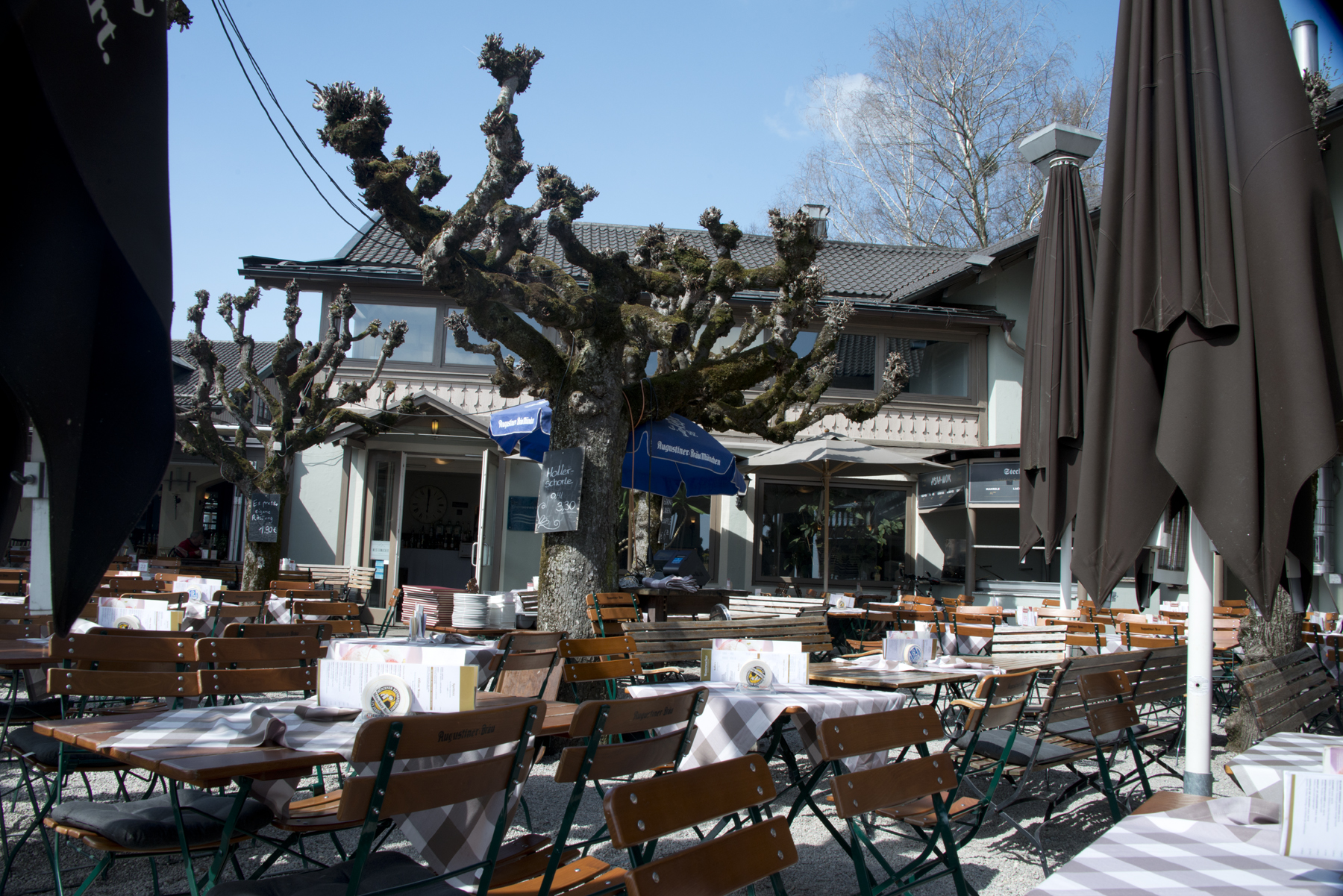 As I was trying to shoot the Alps across the water, the mountains were photobombed by our cheery waiter: 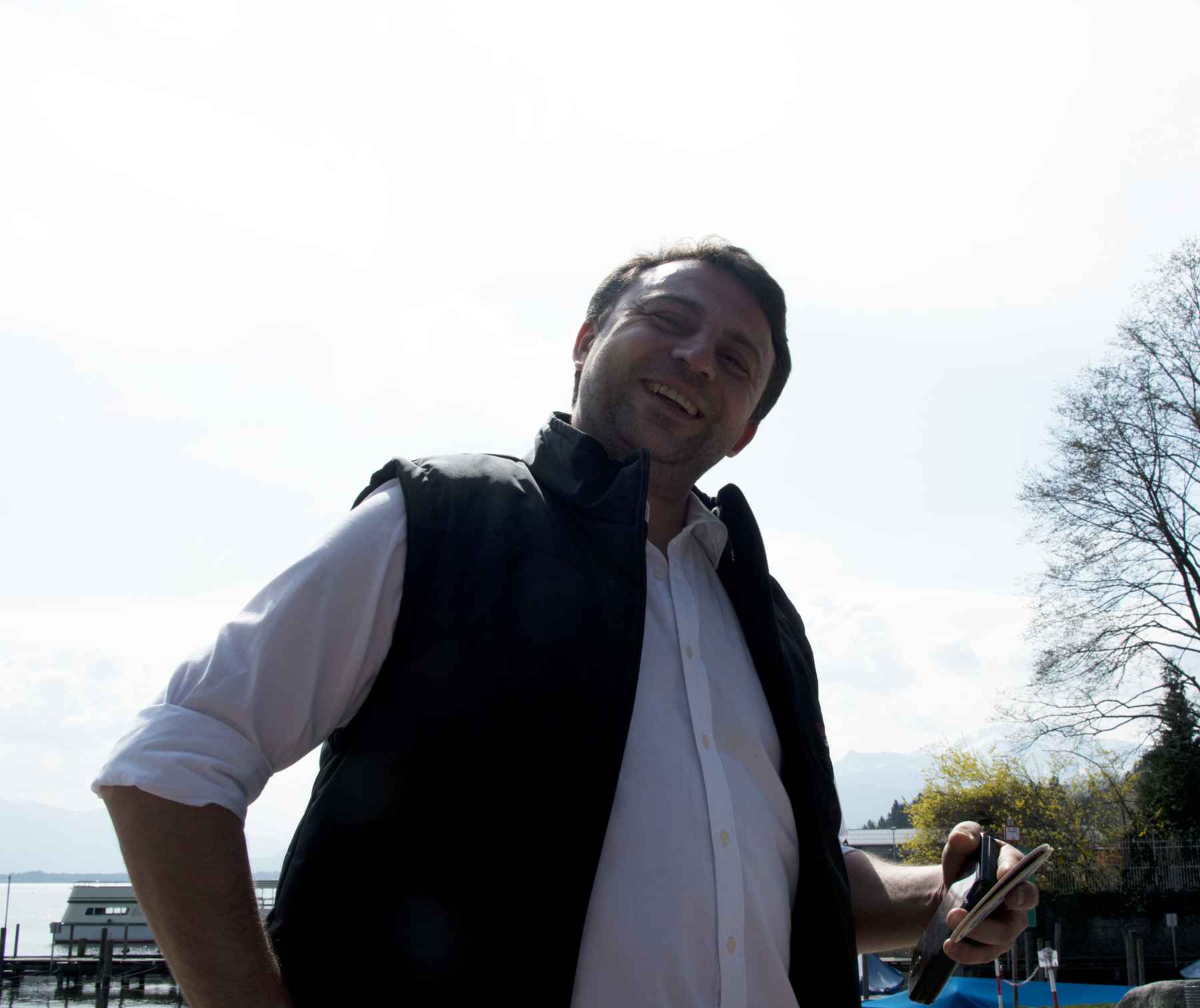 I sent him off to get our beers and was able to get the Alps at last: 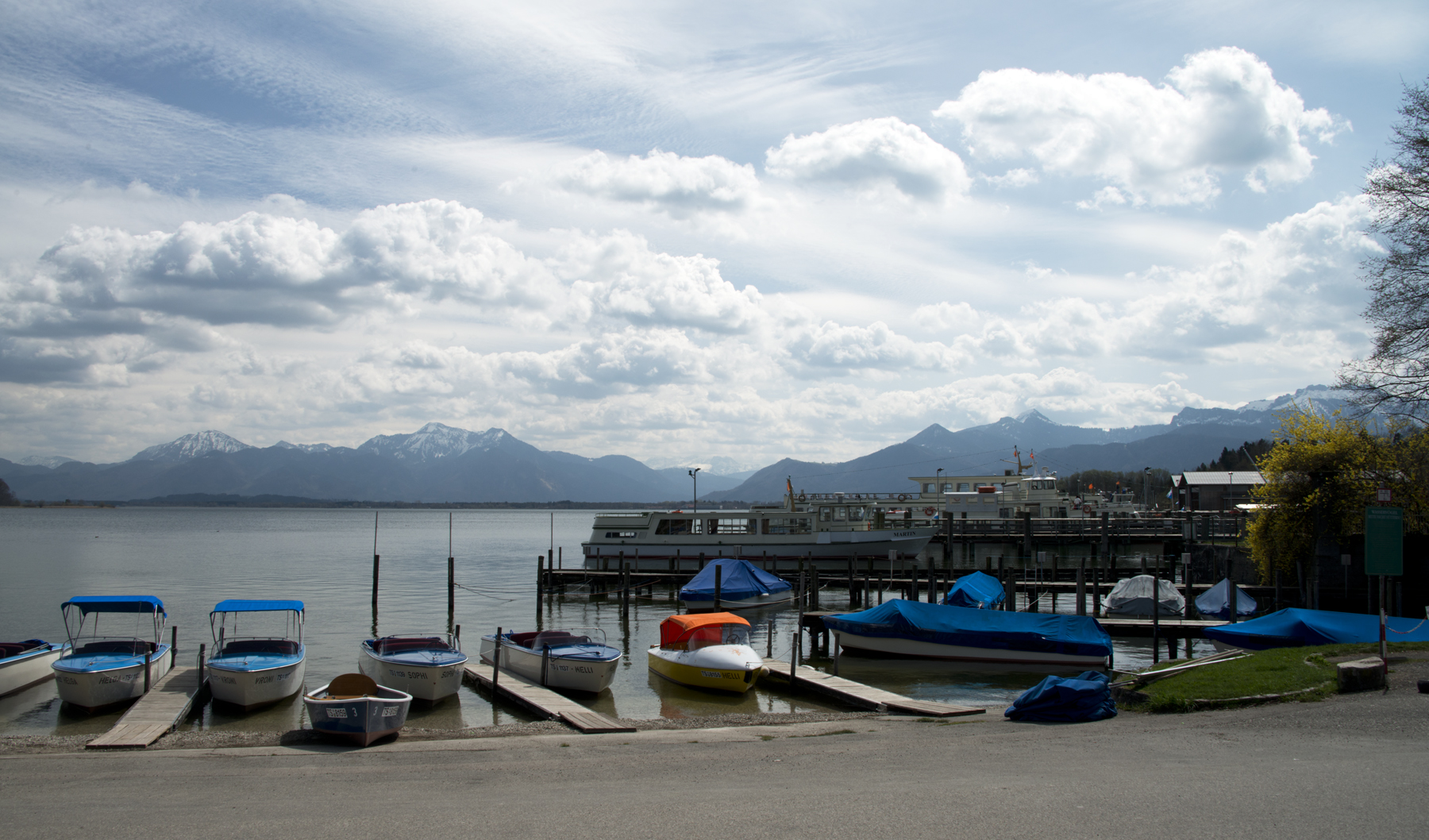 We had a wonderful lunch there in the sunshine and lingered over it for a while. Long about 1:30 we meandered over to the boat docks and booked passage to the island with the palace. We boarded the good ship Siegfried and set sail, voyaging about 15 minutes to the island. 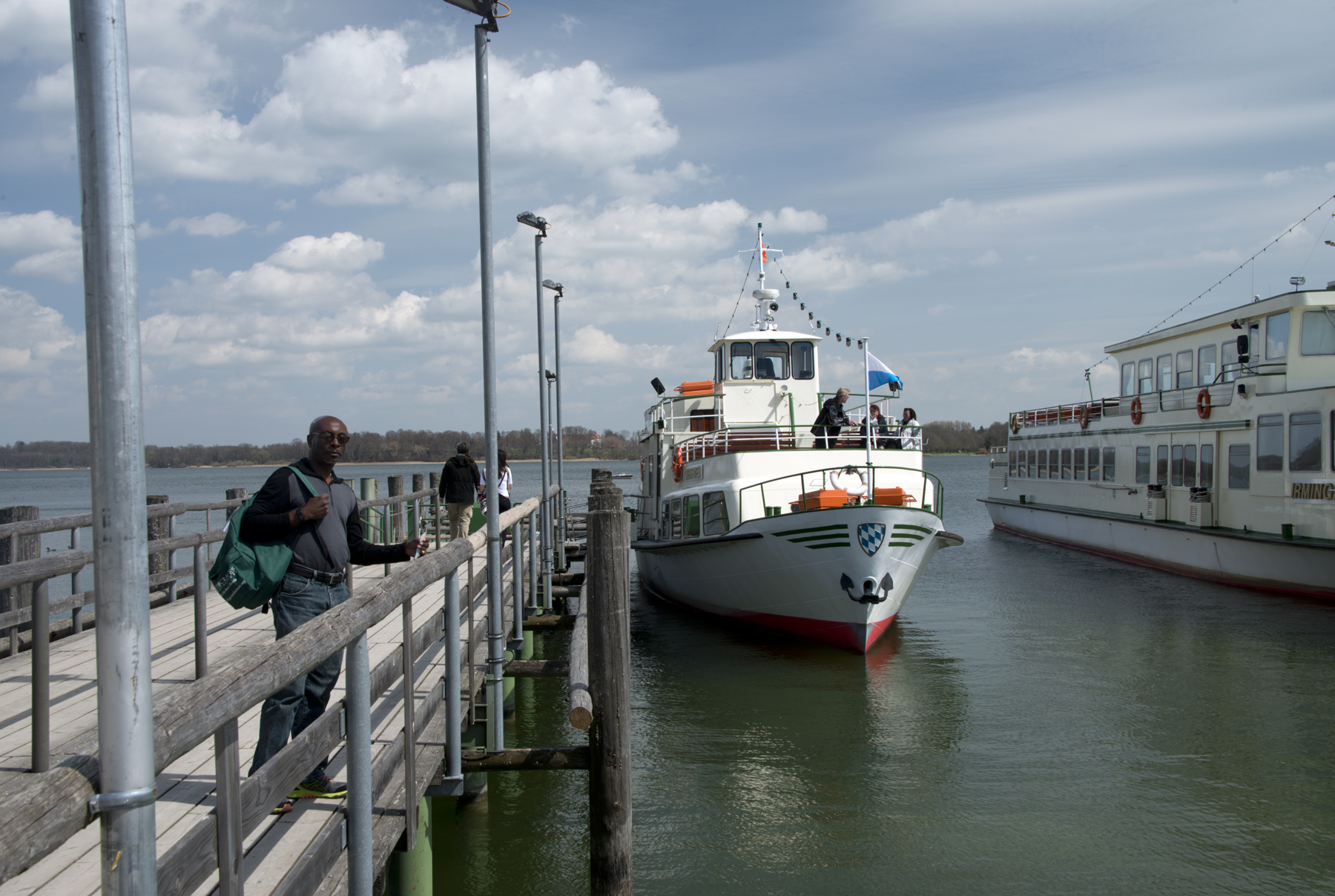 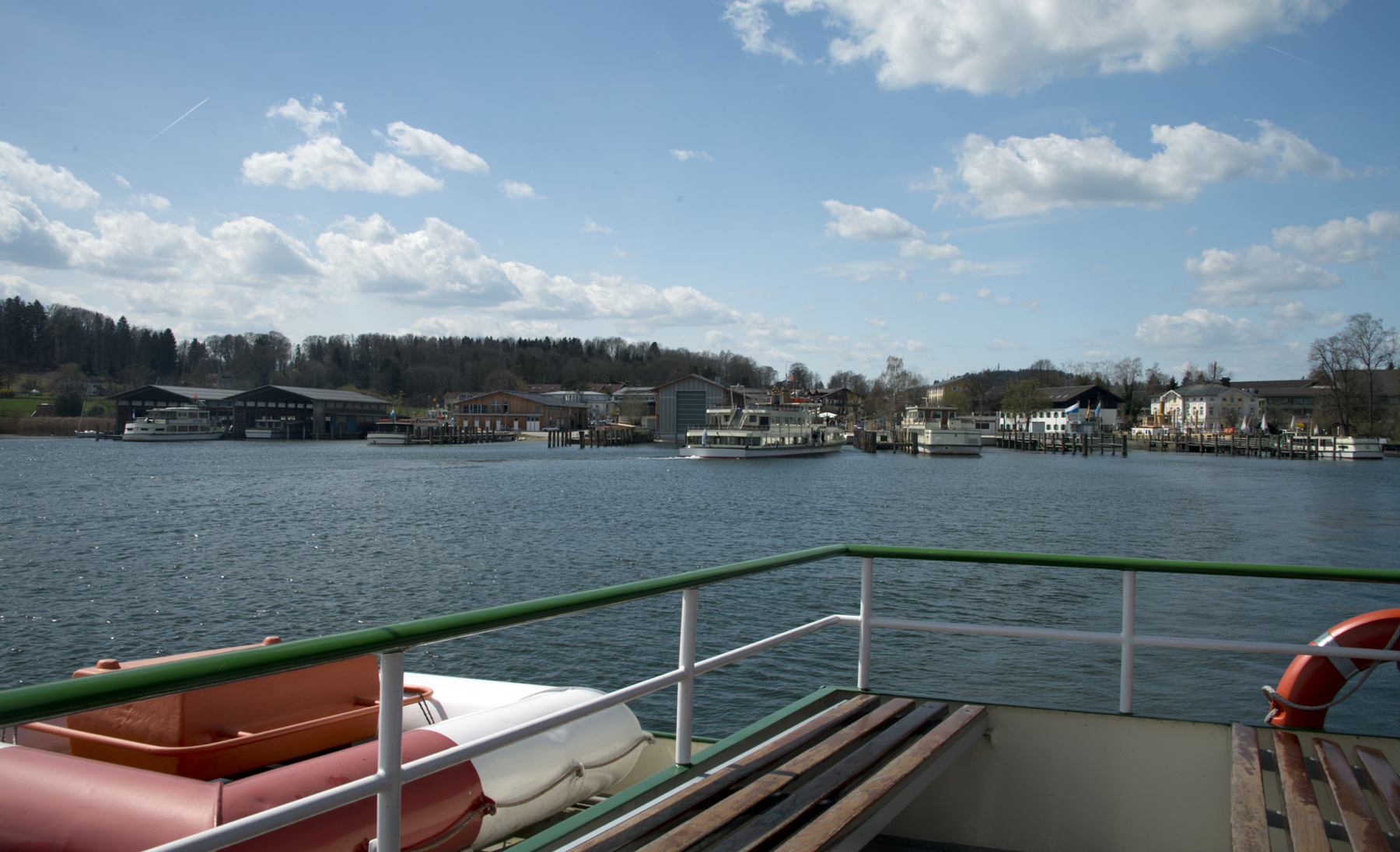 We soon approached the island. Here you can see the dock and abbey on top the small hill just beyond: 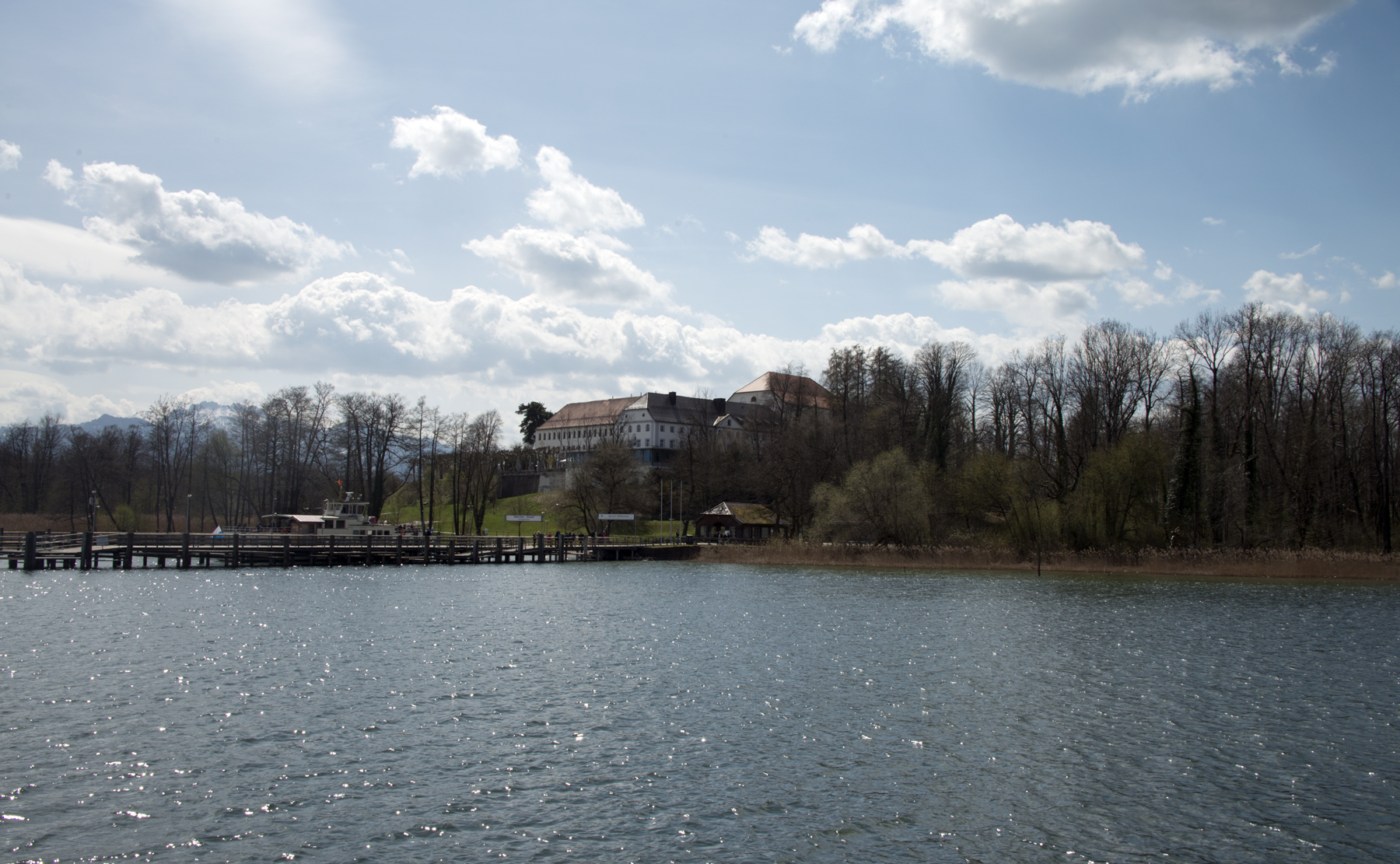 We then had to buy a ticket to tour the palace; fortunately there was one in 45 minutes with an English-speaking tour guide.

Of course, we were in Germany so there was some kind of walking involved. We had the choice to either walk the two kilometers (1.2 miles) to the palace, or take a charming horse and carriage to the door. We opted for the walk. Here was some scenery along our path: 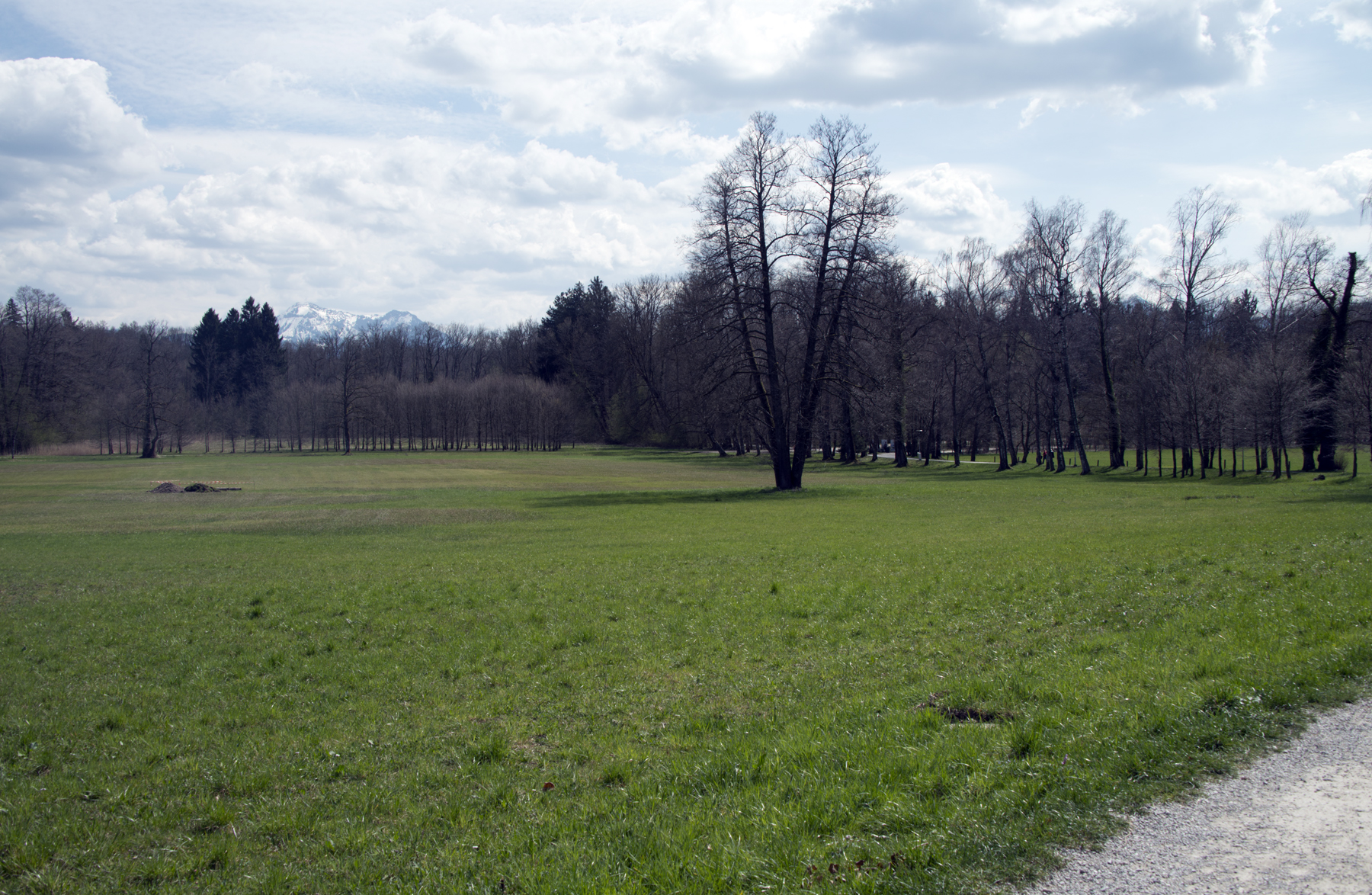 You could see evidence of the high winds we’d had a few weeks ago in the forest: 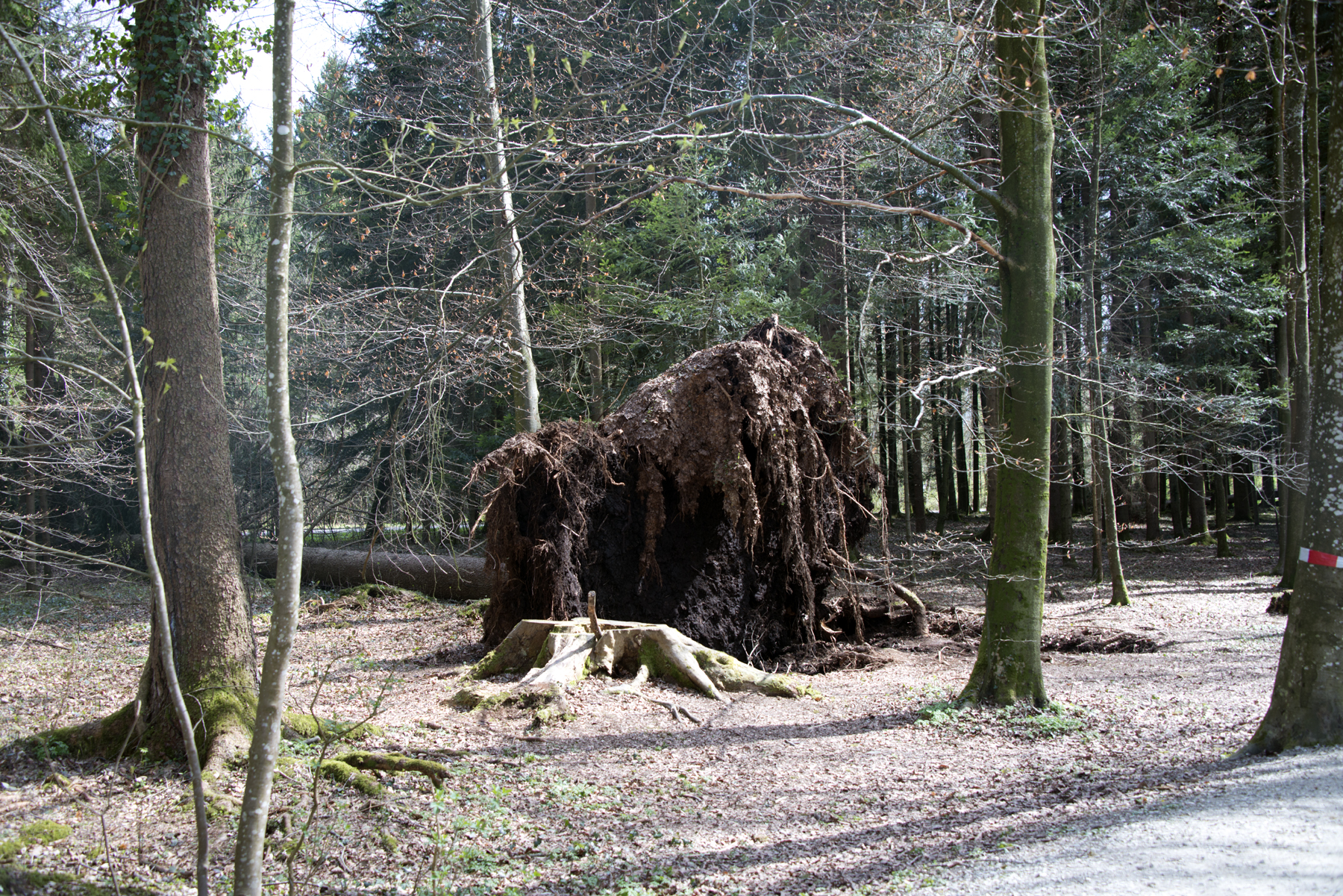 Presently we came to a clearing on a small hill and were rewarded with a magnificent view of the palace: 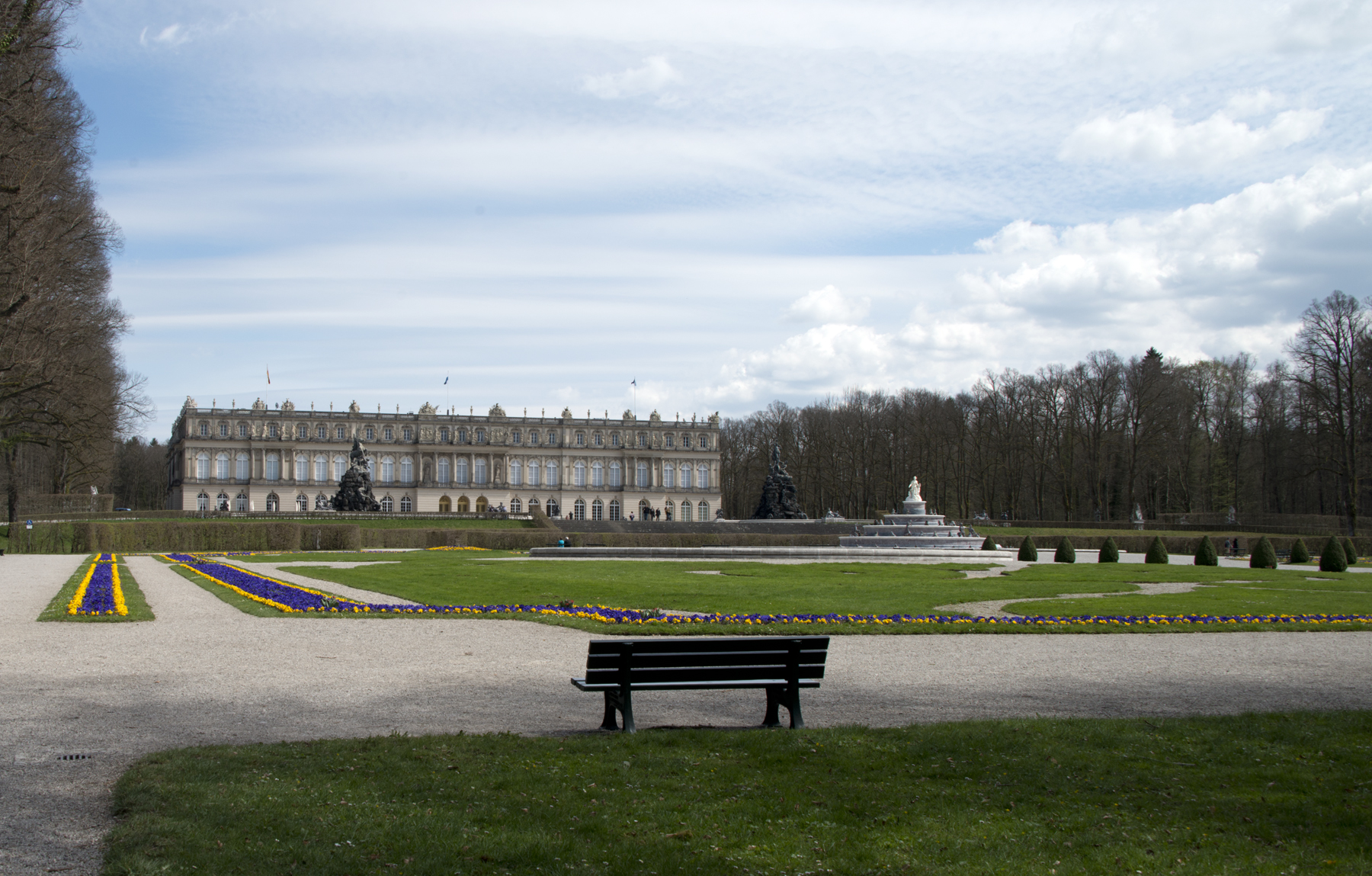 It did, indeed, look like Versailles, without the left and right wings. And the gardens were much smaller, but very well manicured. 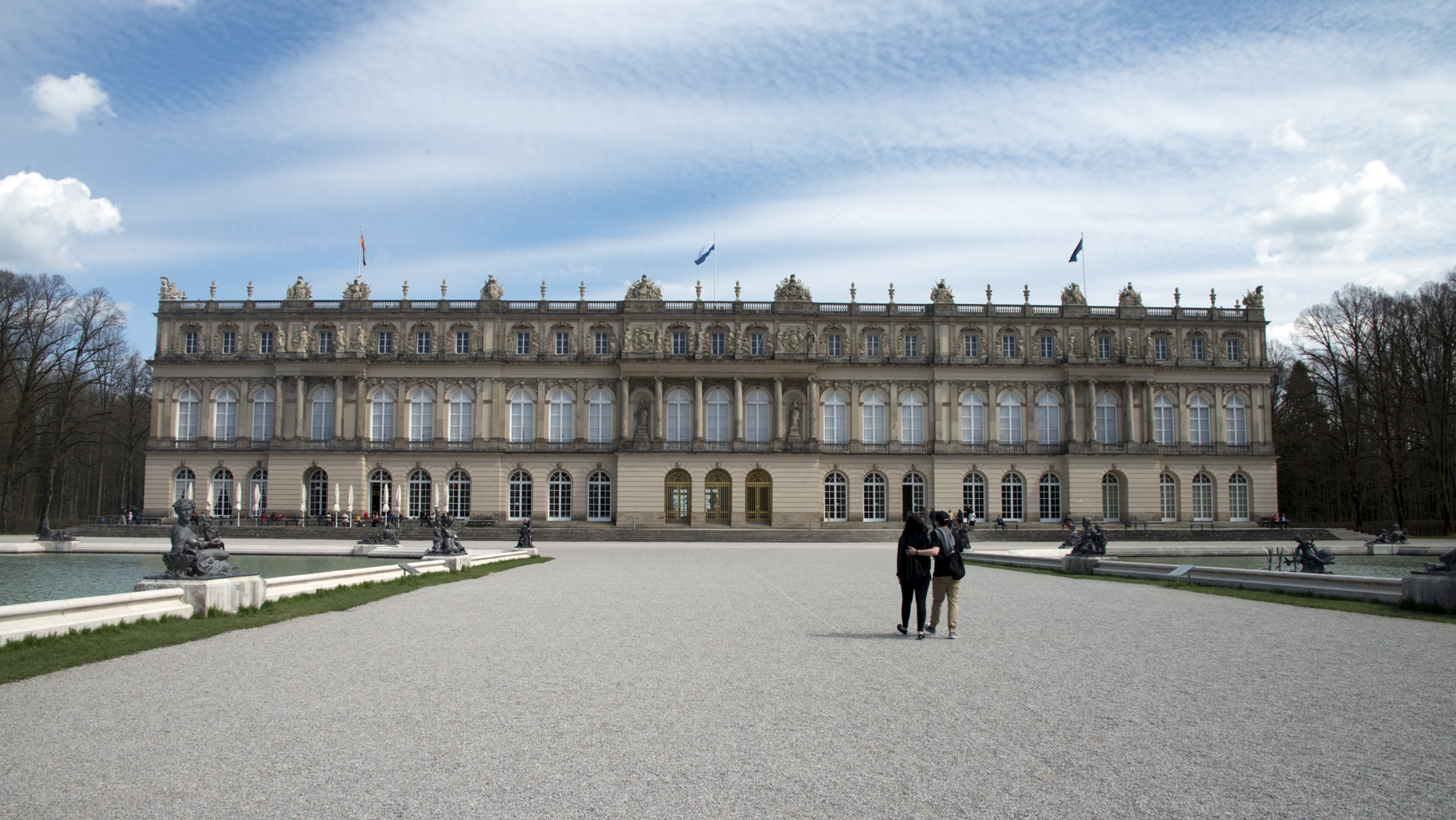 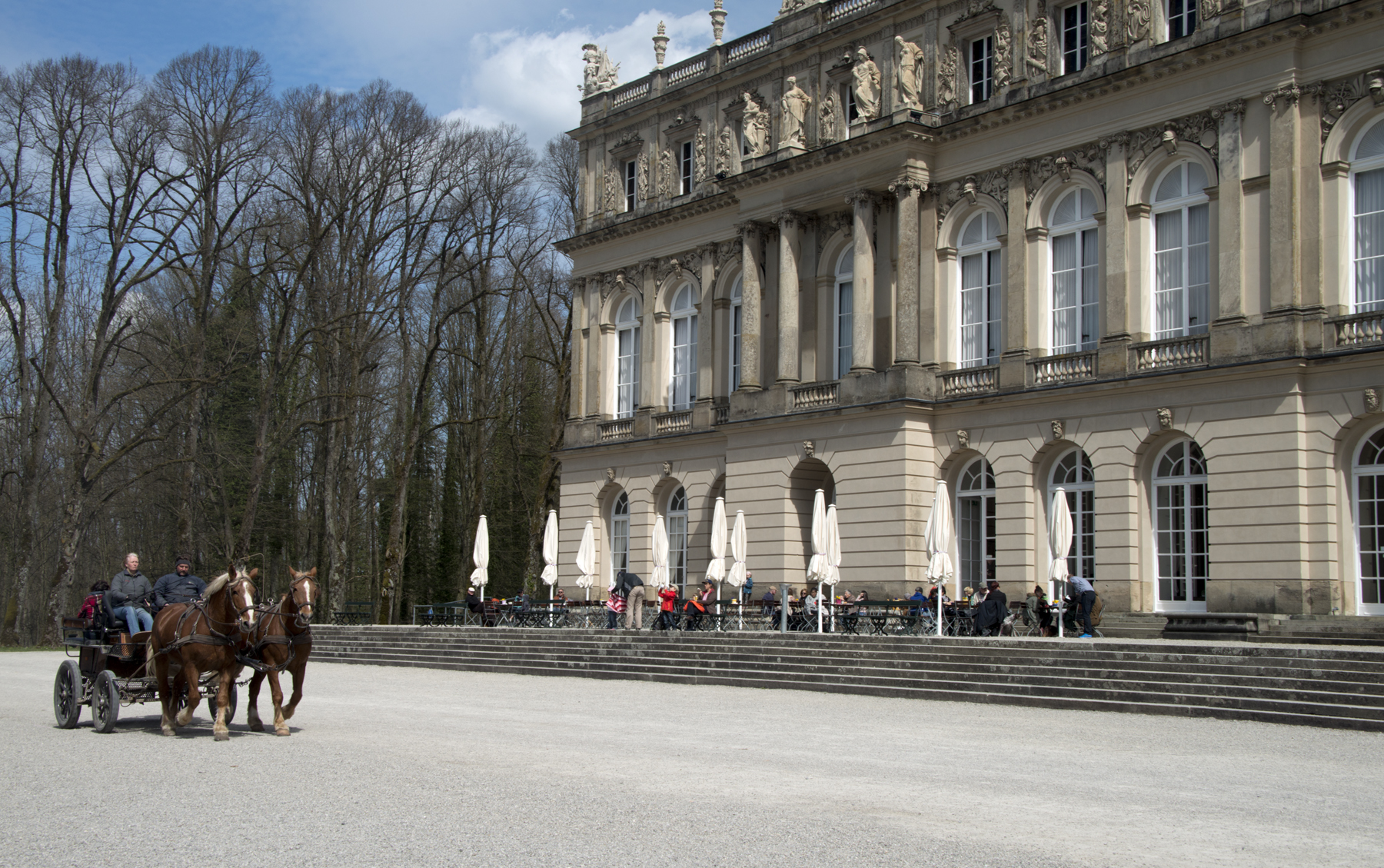 We had some time before our tour, so we lounged on a bench for a few minutes. Just then, the garden fountains began to pour their waters forth: 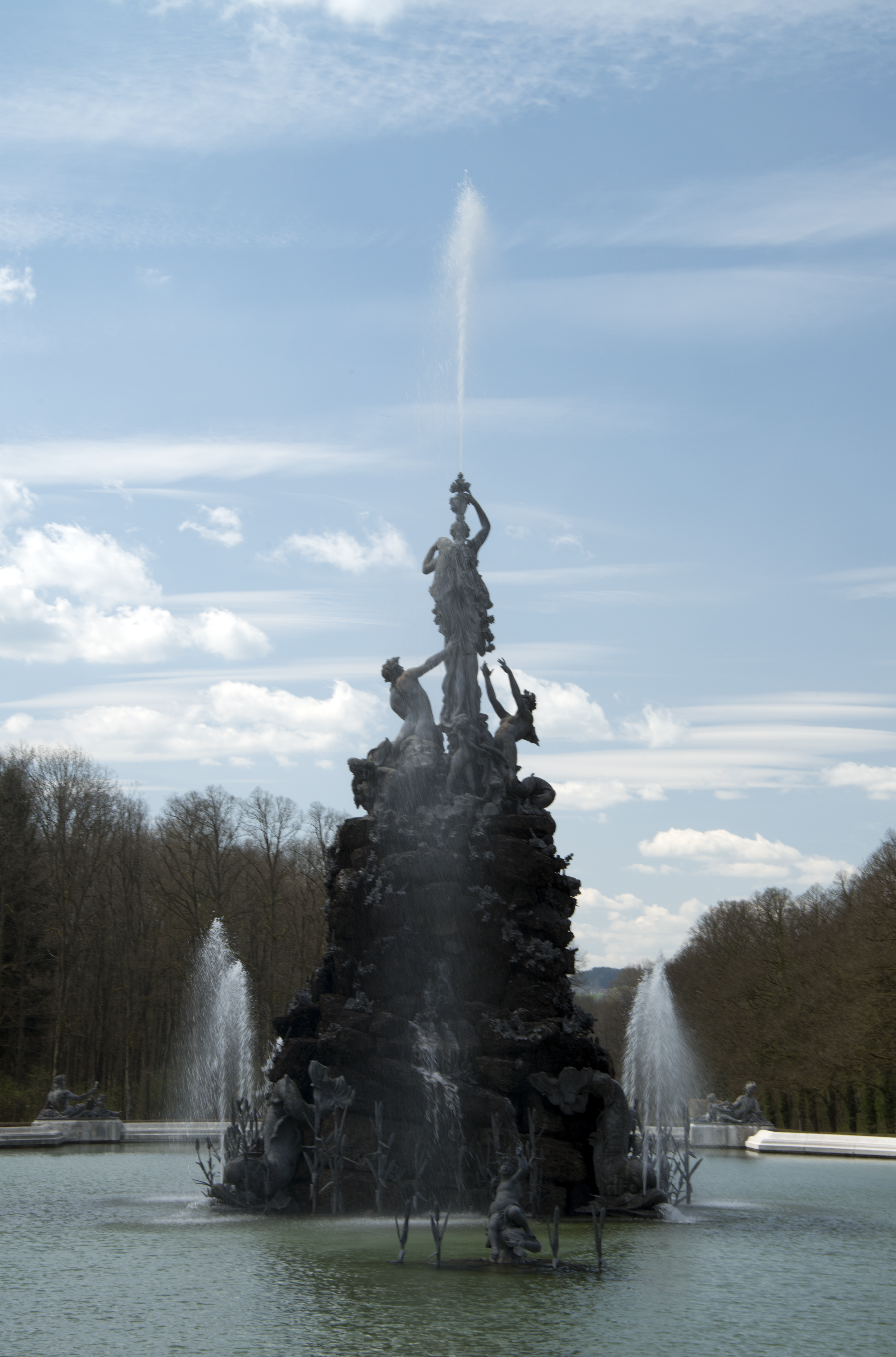 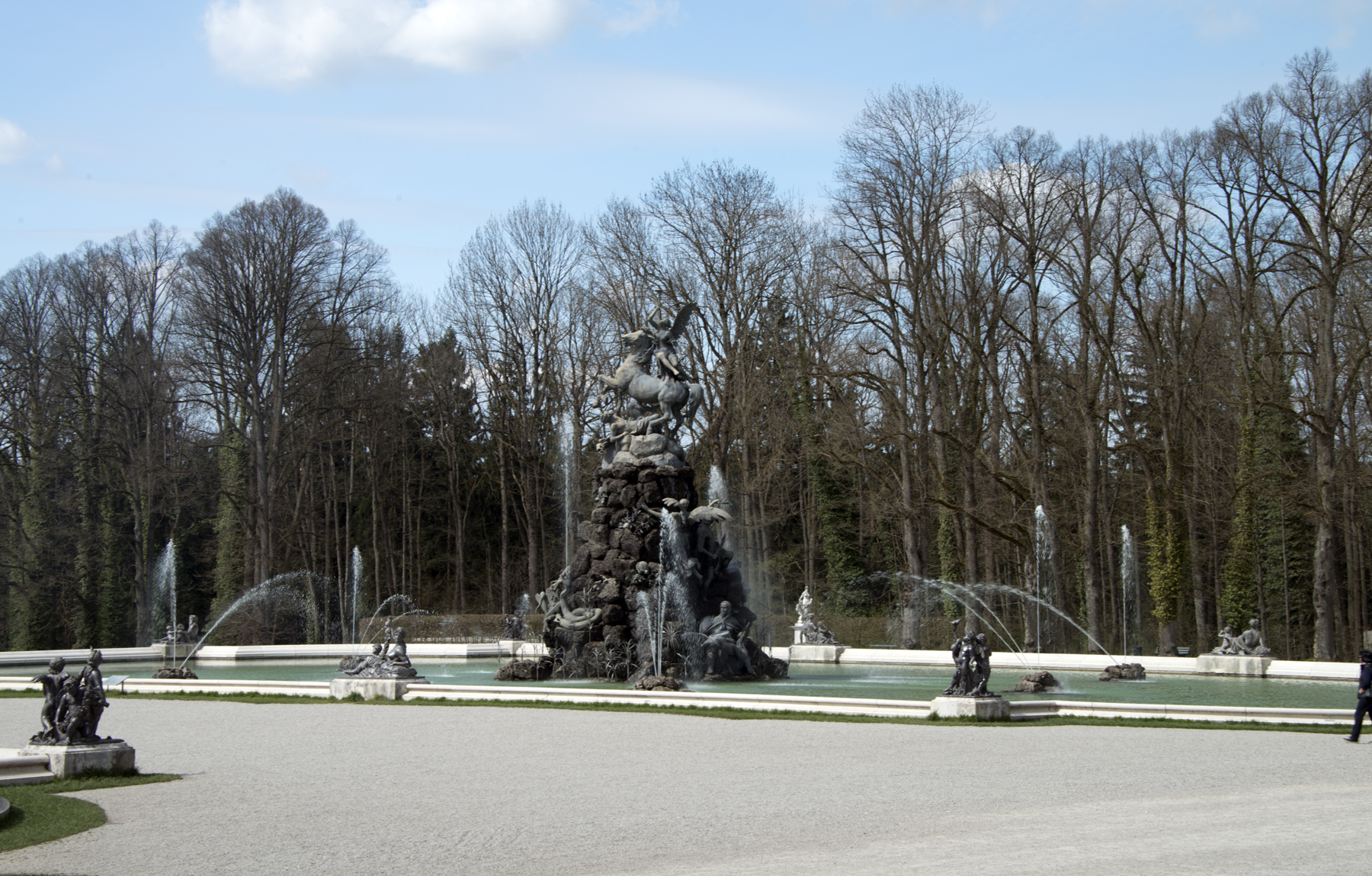 As is the case with most tours, we were not allowed to take photos inside the palace. But I will tell you that the place was GOLD in capital letters from top to bottom! And because Ludwig never actually lived here – he ran out of money then died before it was completed – everything was in mint condition. Truly an exact copy of Versailles inside and out (as far as it was built anyway) and absolutely amazing. The Hall of Mirrors is even longer than the French one.

Only 20 of the 50 rooms that were built were finished on the inside. But we even got to see a portion of the unfinished palace. The walls are actually standard red brick; the marble, faux marble, gold-leafed wooden sculptures and mirrors are all hanging on the brick walls underneath.

After our 25-minute tour, we moseyed back along the path to the dock. Next to the abbey is the church for the monks: 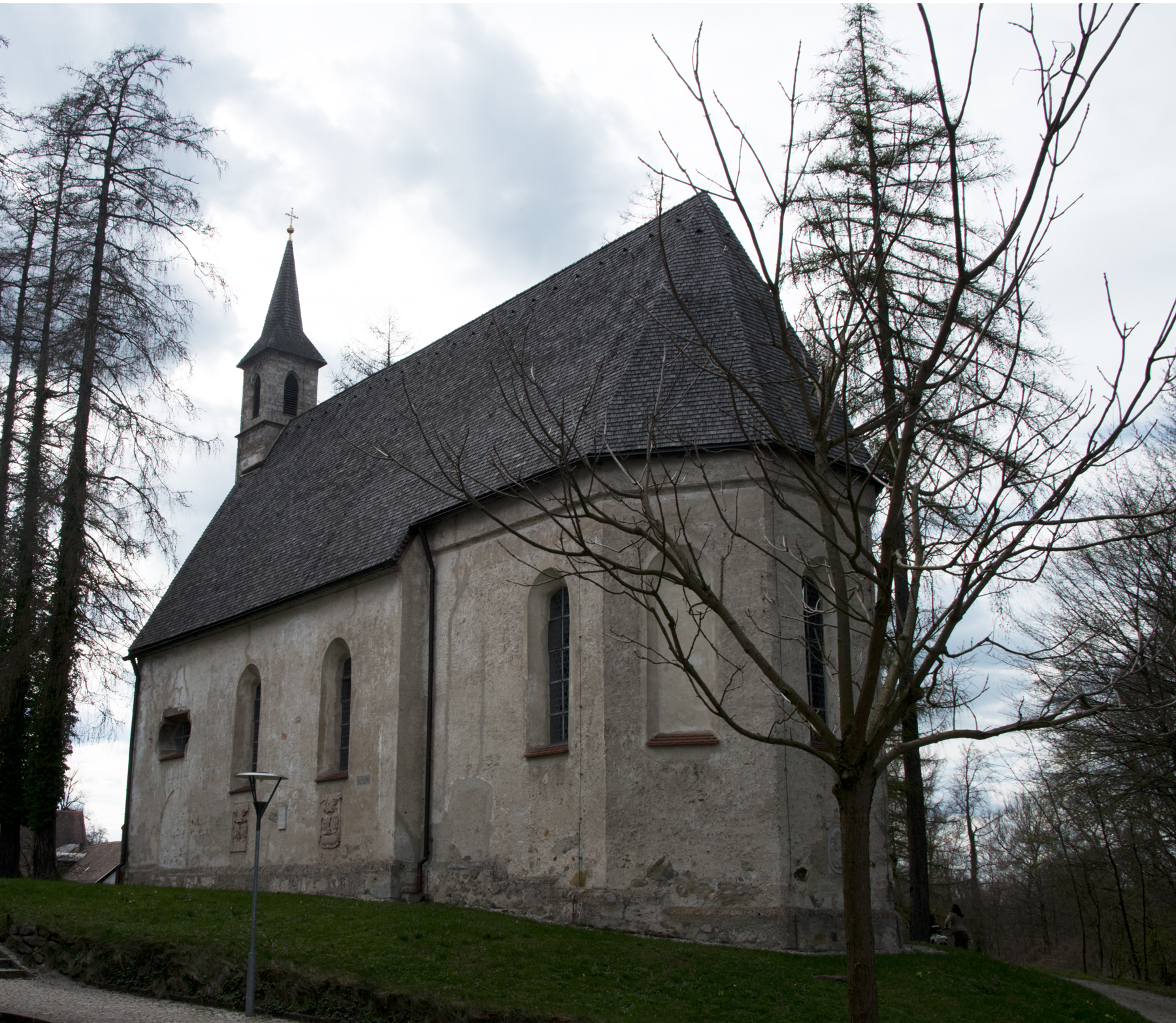 And next to that is a cafe where we had a much-needed coffee and water break. Here’s the view from our table of the path we’d just trekked: 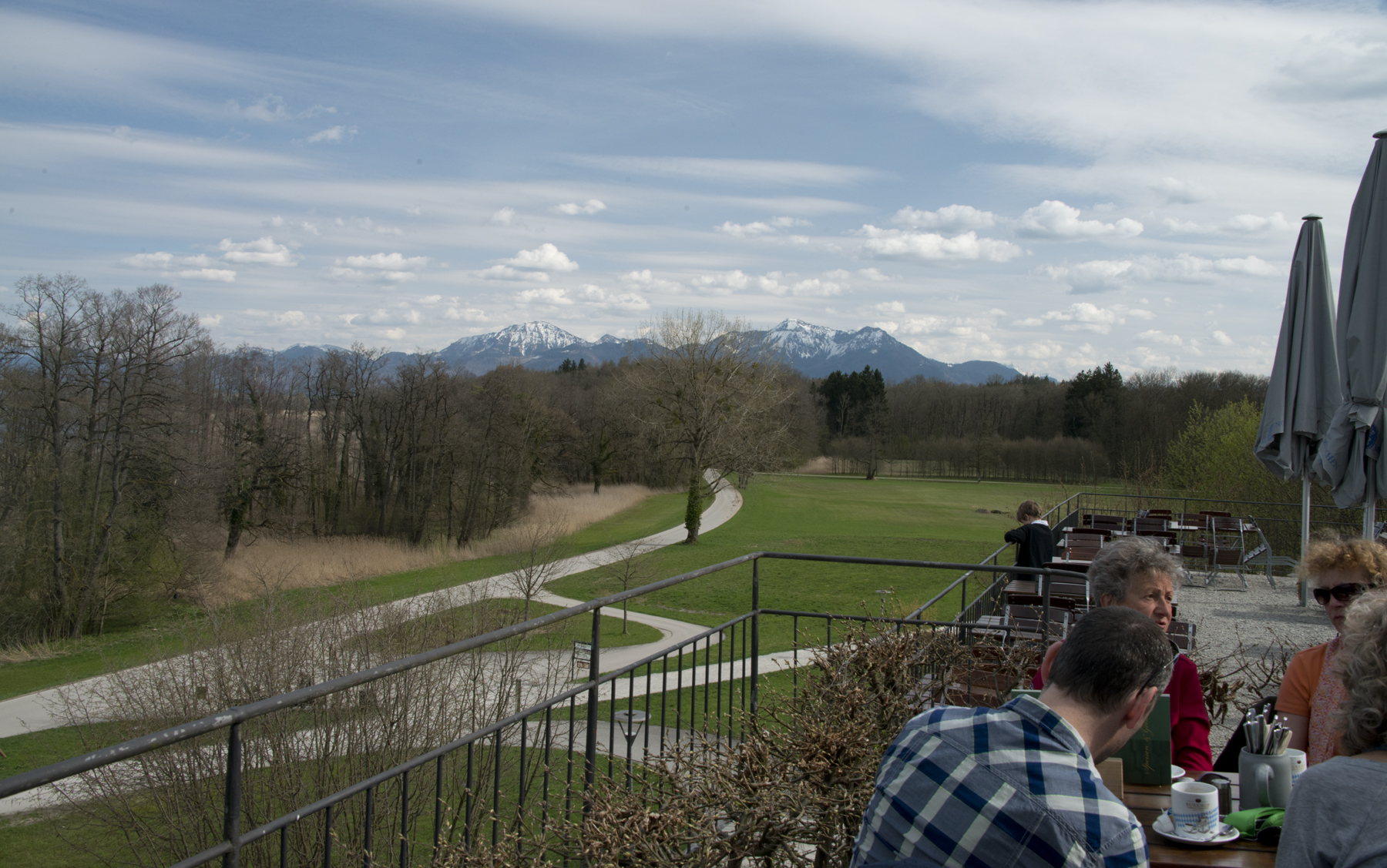 And here’s the view of the lake from there: 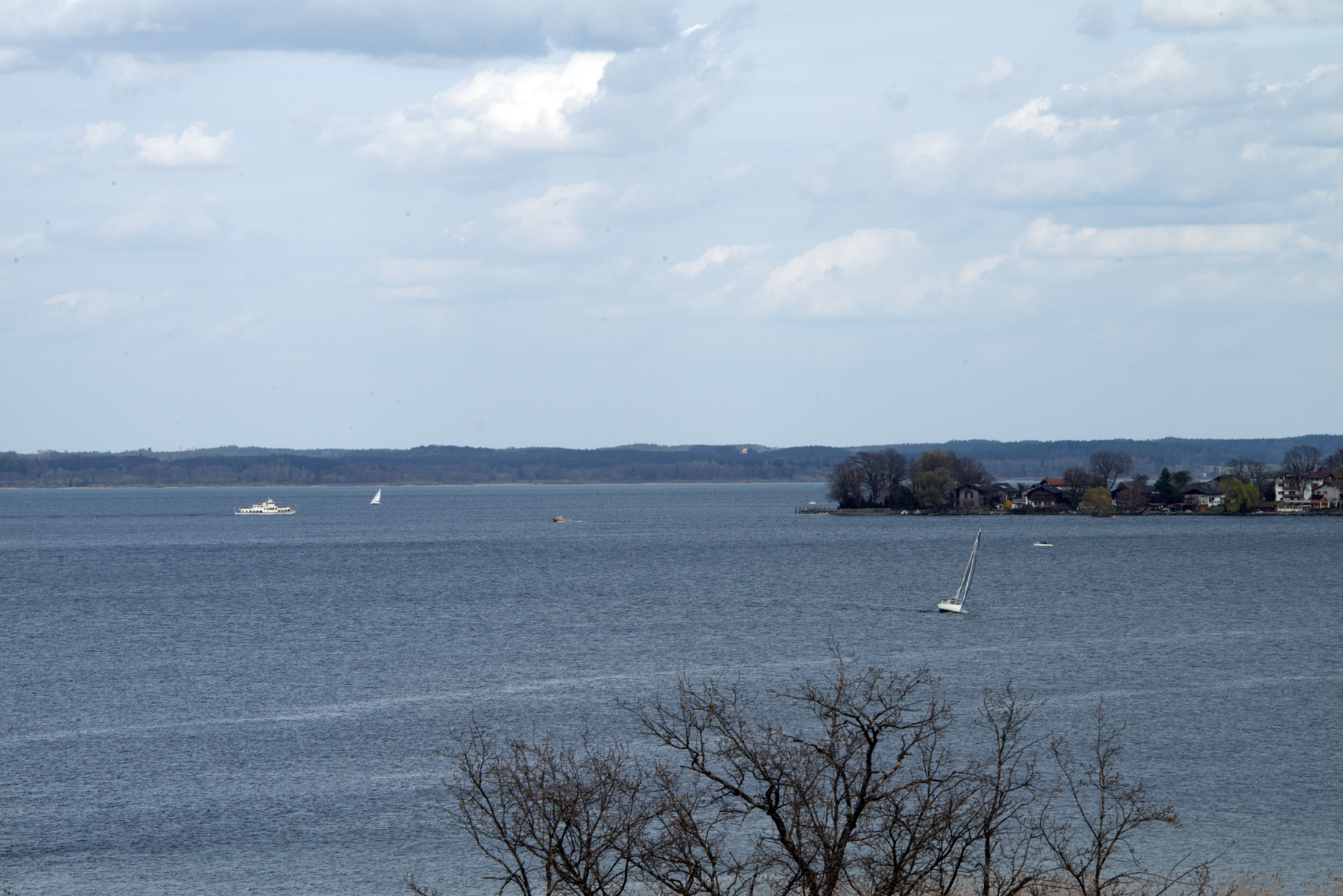 Soon it was time to board ole Siegfried and be on our way back to Prien. It was much colder on the return trip, but we managed to survive. Since it was about 5:00 p.m. and rush hour, we decided to have dinner in Prien at the same place we’d had lunch. It was also wonderful, seeing this little seaside village get ready for evening. By the time we left a couple hours later the traffic had cleared and we had a nice, easy ride home.

And that was on a Tuesday! I hope you enjoyed our trip to the mountain lake. There are two more lakes on my list, so you may see them soon. May you enjoy your spring as much as I am enjoying mine. I’m looking forward to a trip to Paris in the next couple of weeks – so stay tuned! 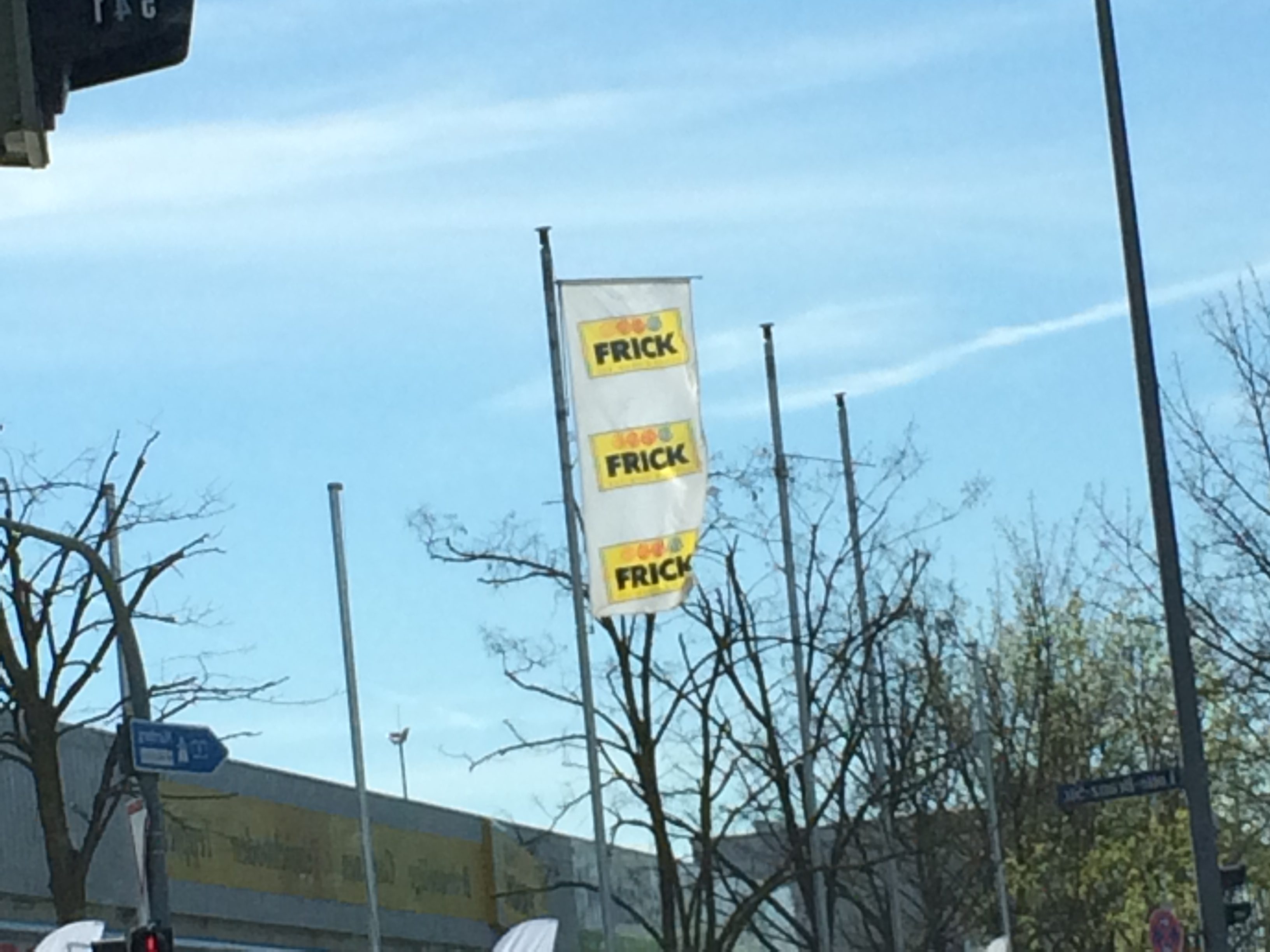