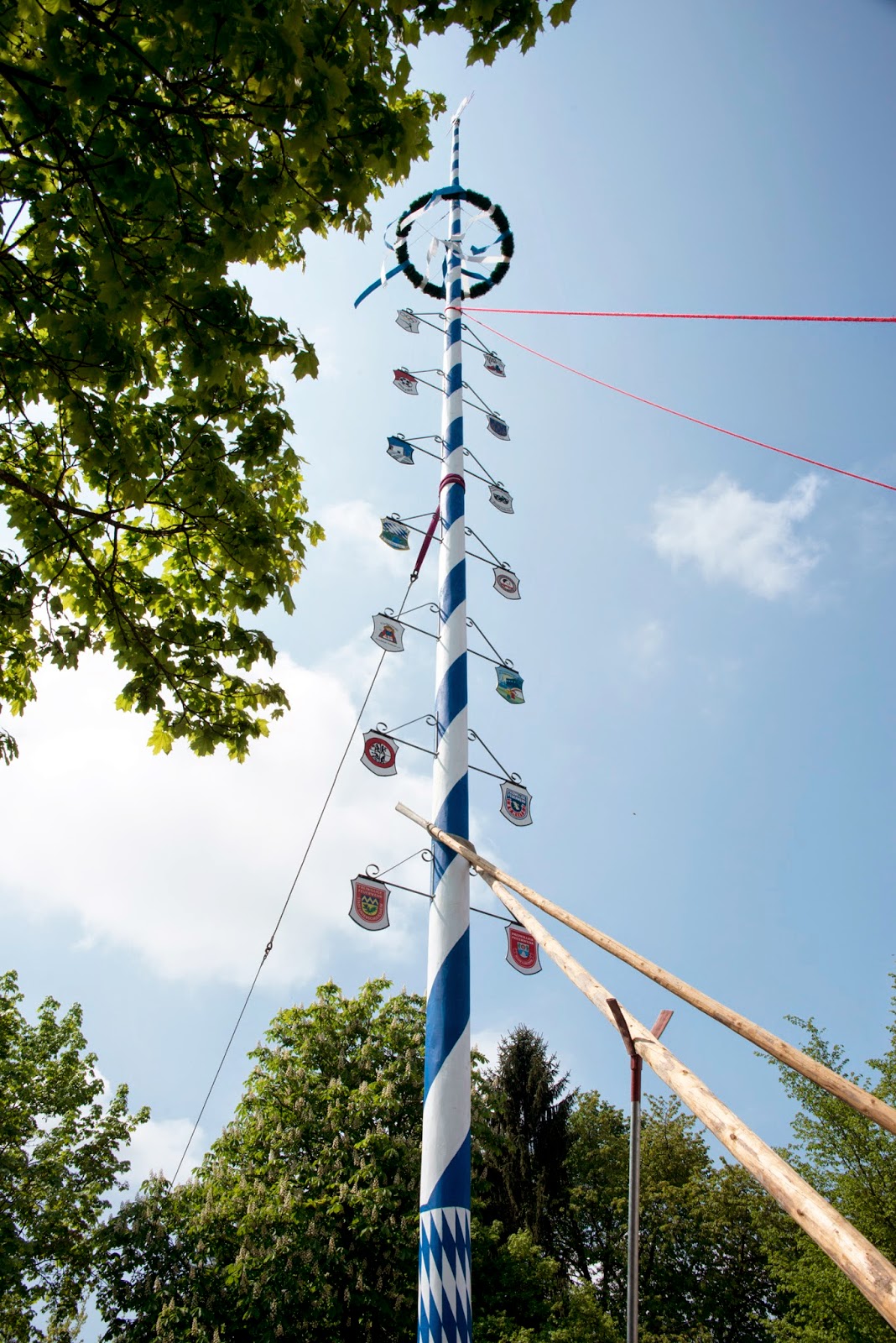 Did you know I write cookbooks?

Get an authentic schnitzel recipe described in this blog post, as well as dozens more authentic German and Bavarian family recipes in my cookbook

A Travel for Taste: Germany.

Click the image below to buy yours today on Amazon.com!

Each year on May 1st most European countries celebrate May Day, which is the equivalent of Labor Day in the US.

My husband and I were preparing for a walk around 8:00am last week and noticed some bustling activity at the pub across the street from our apartment. 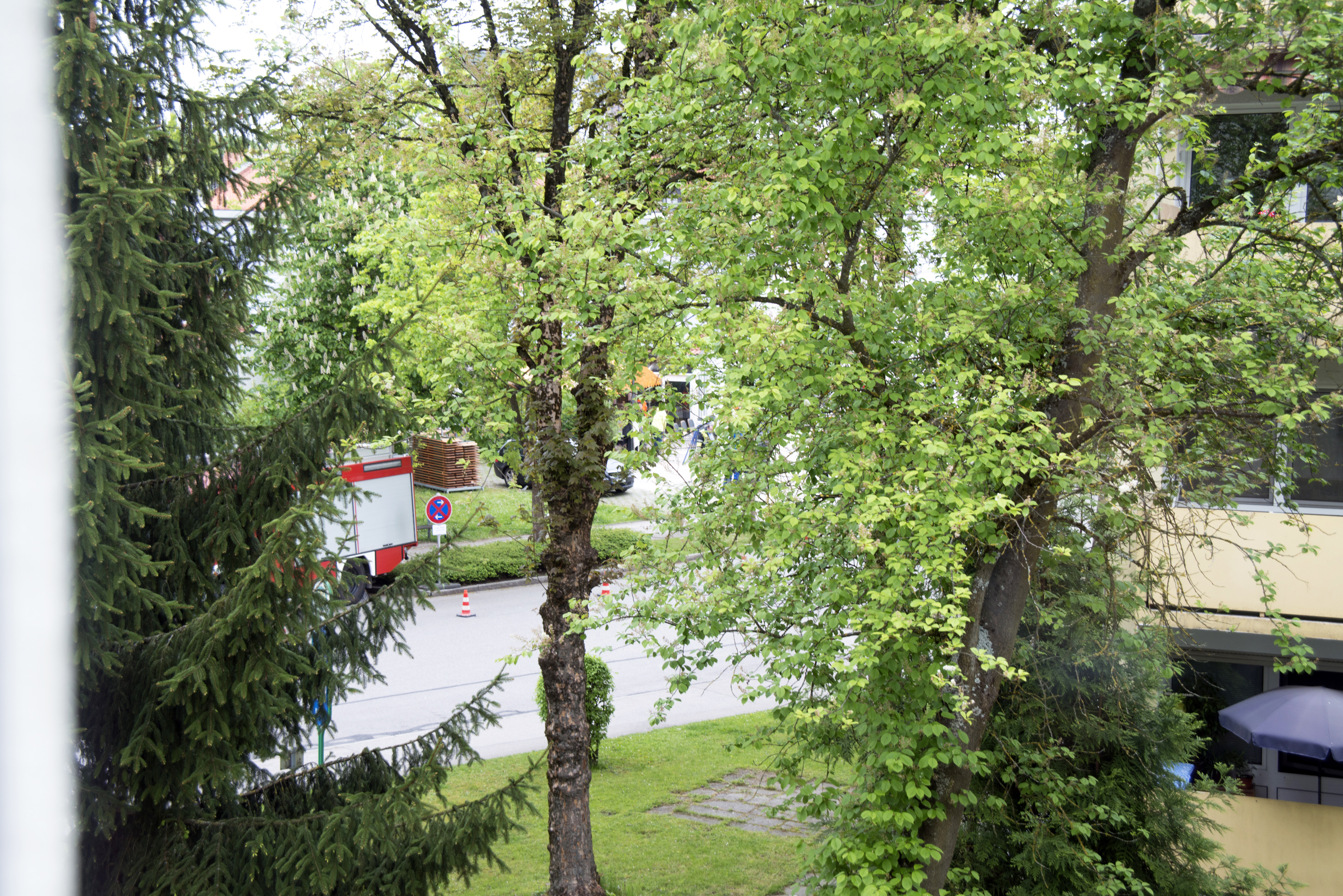 This pub, or Gasthaus, which is attached to the local fire station, has been closed since we moved here last fall. It’s been under renovation, and we were guessing that, in light of how long it takes for renovations in this country, we wouldn’t see it open until next fall at the earliest.

However, we’d seen posters around the neighborhood announcing the erection of a new Maypole on 1 May. The particulars of a Maypole in Bavaria are too numerous to go into in this post. But I wrote an article about it you can see by clicking here.

I’d seen the fire department cutting down the old Maypole in front of the Gasthaus several months ago. But both my husband and I were taking side bets that they wouldn’t be ready for the new one. We were dead wrong!

On our walk we saw all sorts of activity, from last-minute landscaping to setting up tables to positioning food and beer trucks. Although we’d had no plans to attend the activities that day, we quick-stepped home to grab the camera and came out at the appointed hour: 10:00am.

The fire department, an integral and central organization for any German community, was in charge of all this. They had just moved in the new Maypole by trailer when we arrived. 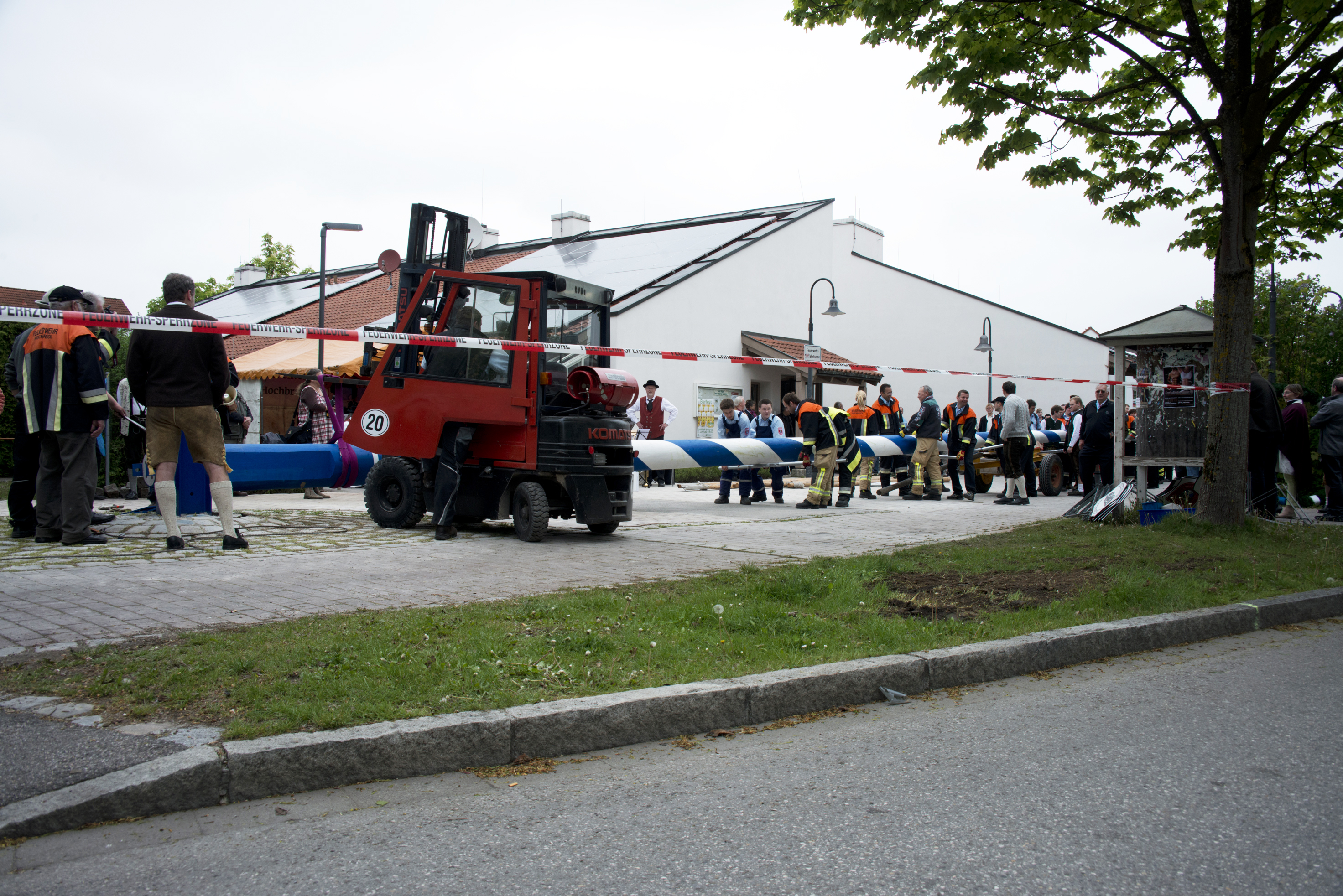 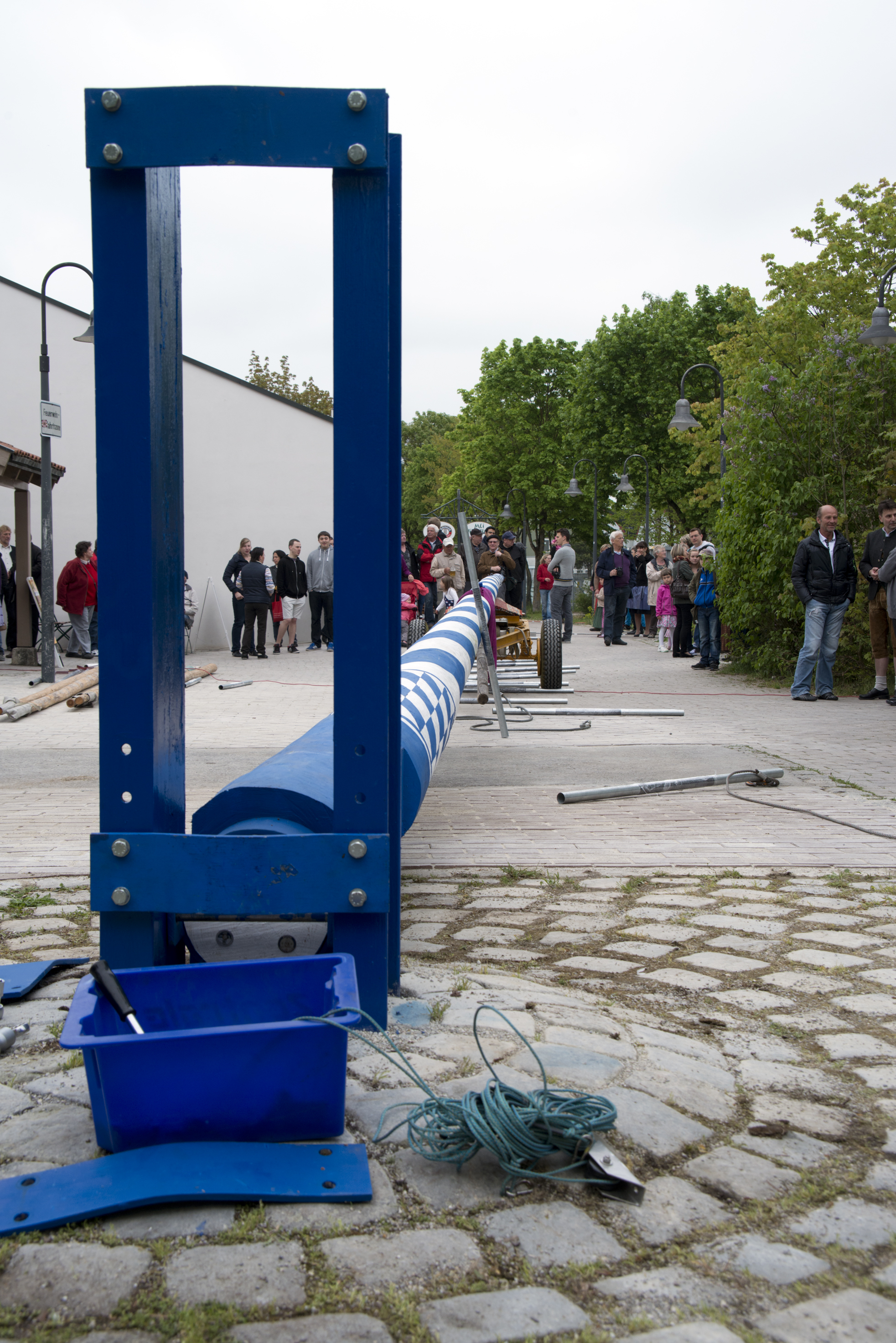 Because we arrived so early, I was able to position myself on the front lines so I could get good photos. Presently, the band took up their position across from me. The Gasthaus is the building on the right in this photo: 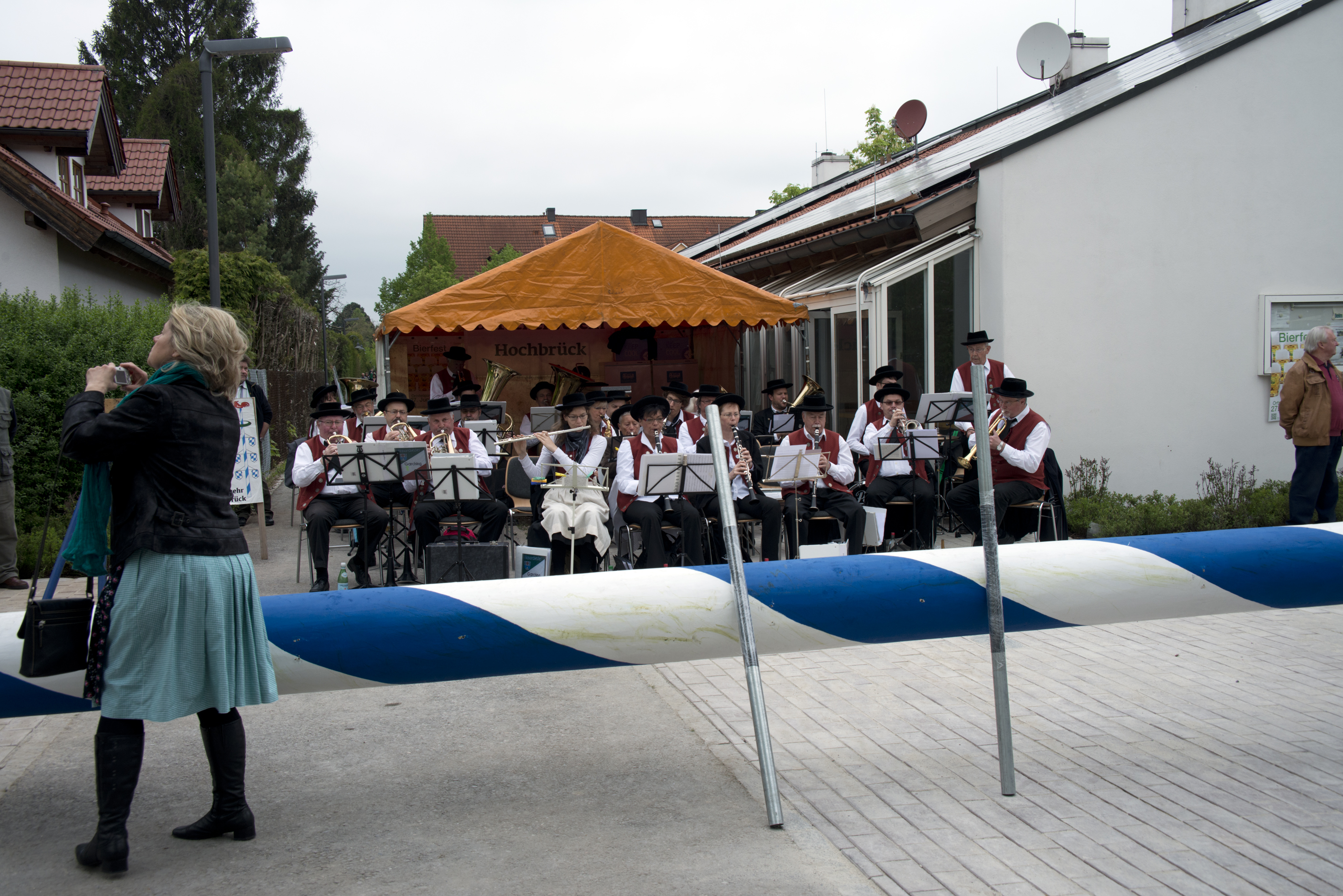 Next to me was a stack of shingles that the firefighters eventually attached to the pole: 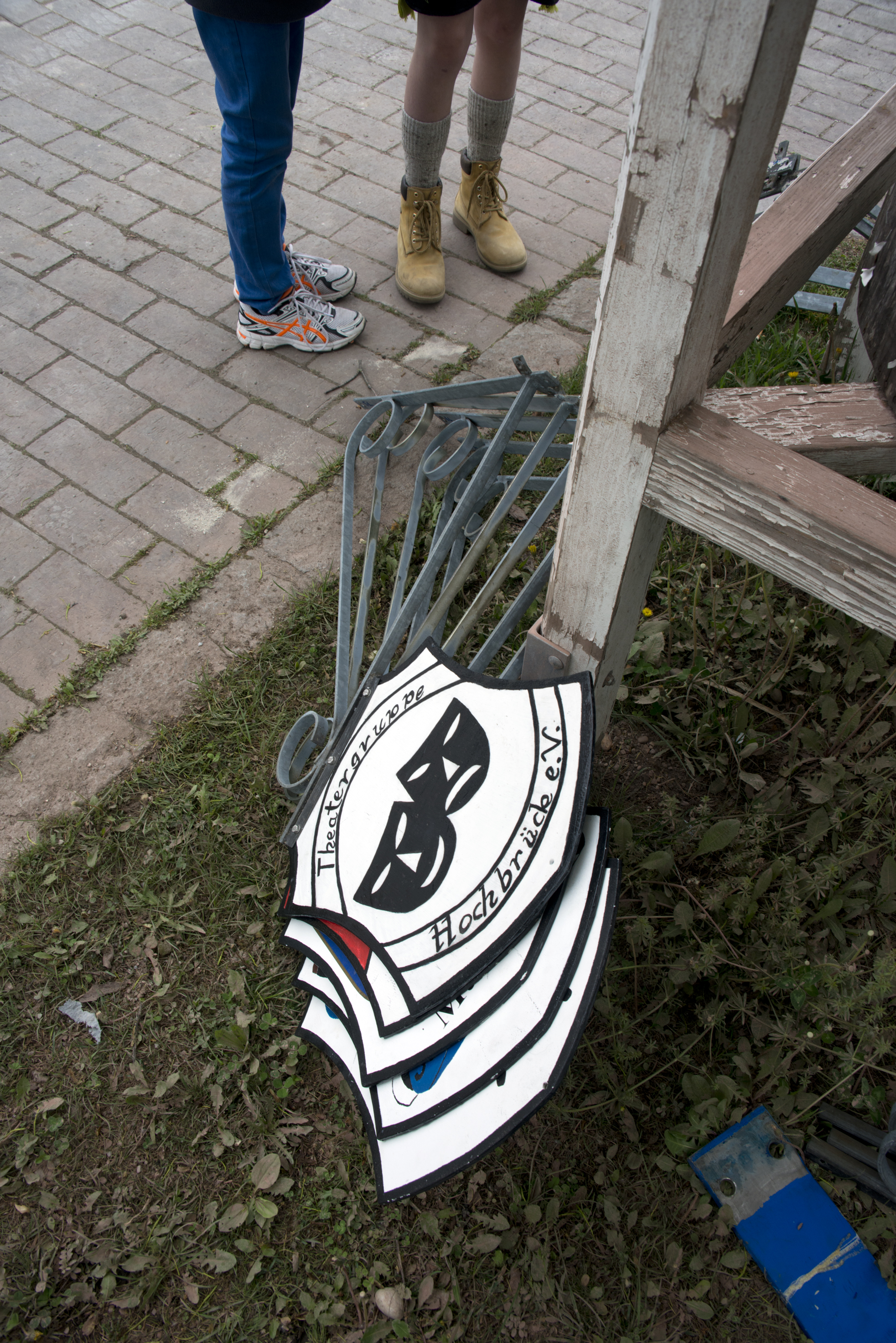 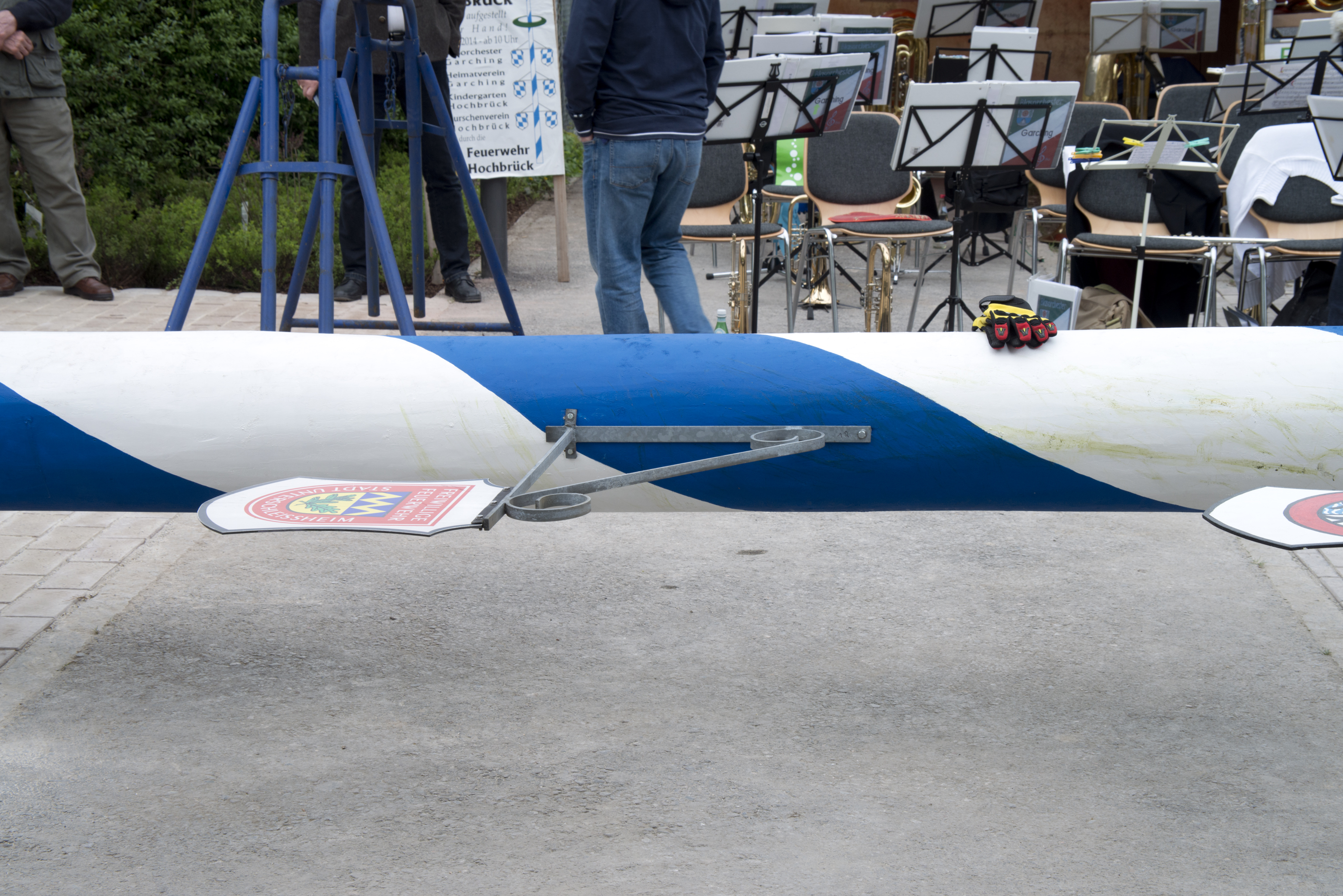 During a WHOLE LOT of milling about of firemen and firewomen, I got some crowd shots. Here’s a young man hanging posters all decked out in his Lederhosen: 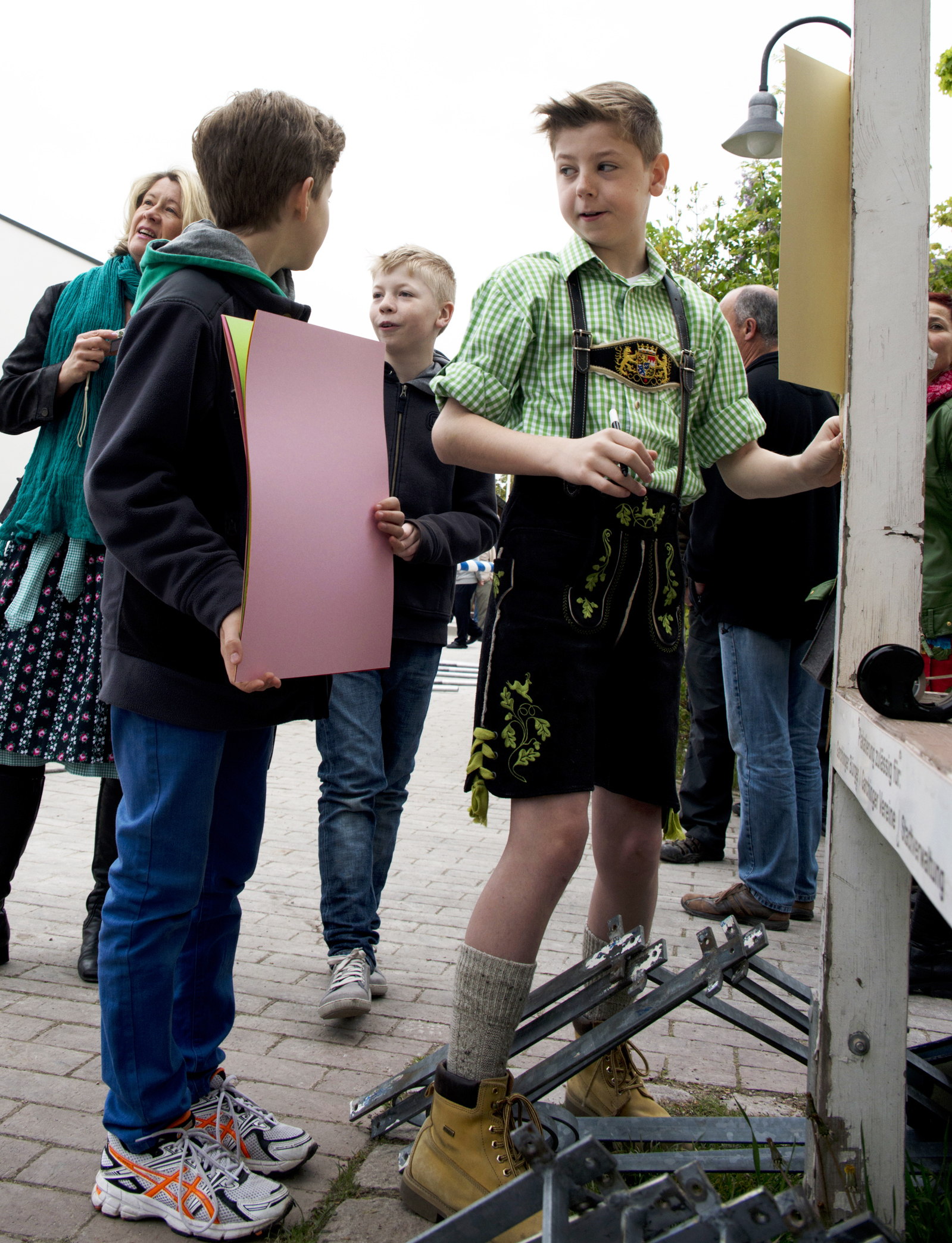 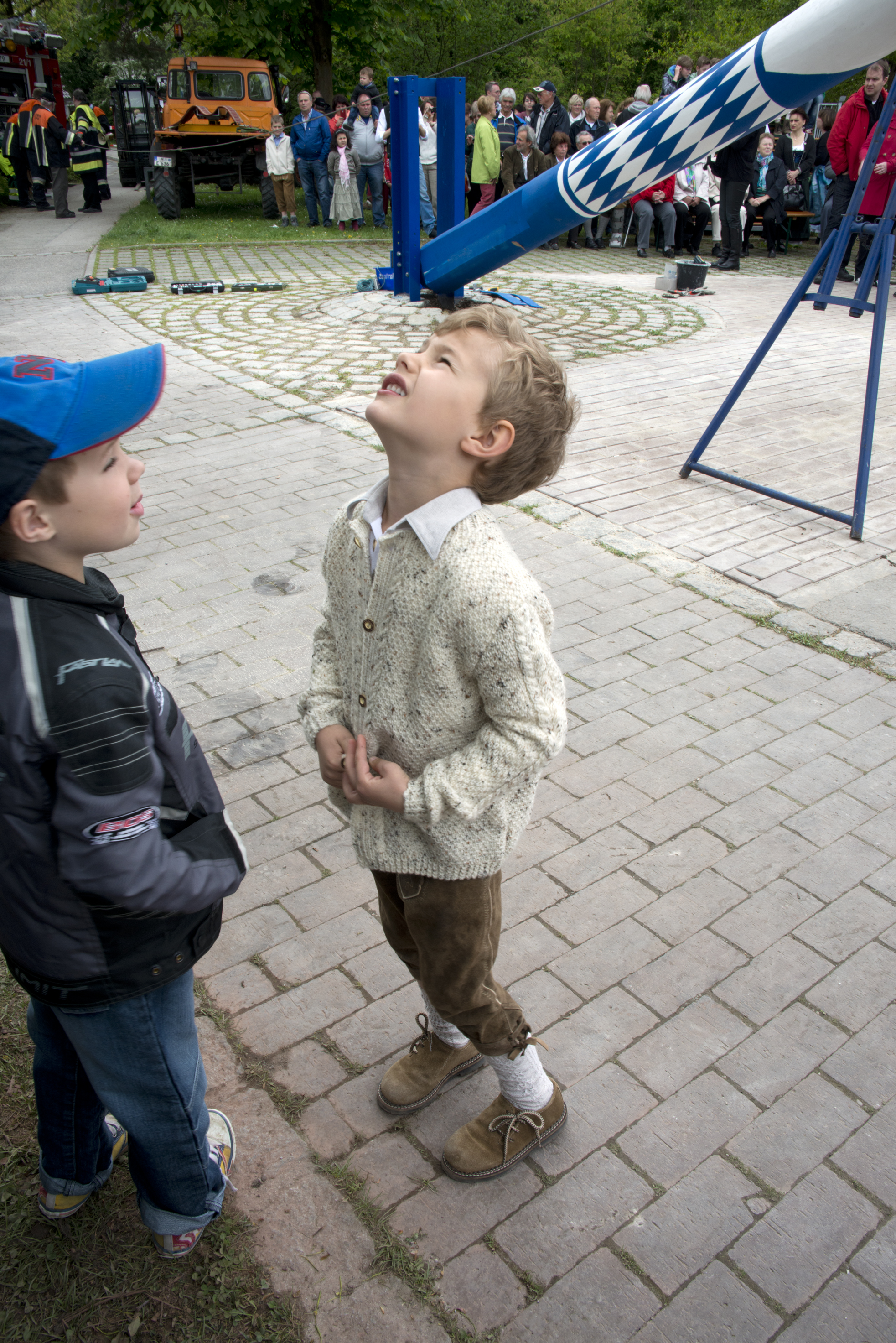 Aren’t they sweet all dressed alike???

And who is this young man (no Lederhosen – yet!)? 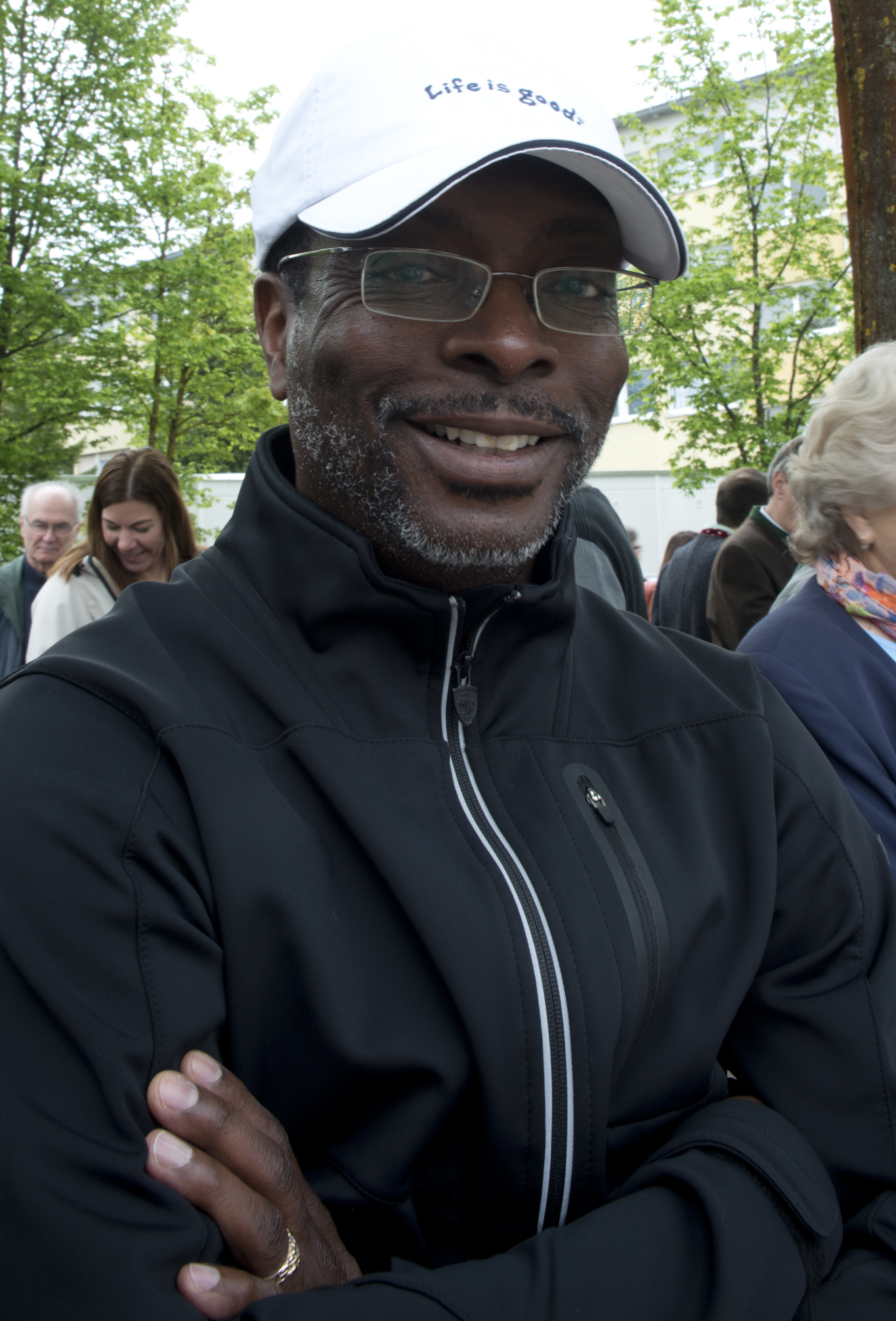 Eventually the crowd gathered. The fire truck in this photo has a winch attached. You can see the cable which tethers the Maypole, which is still lying down in front of me: 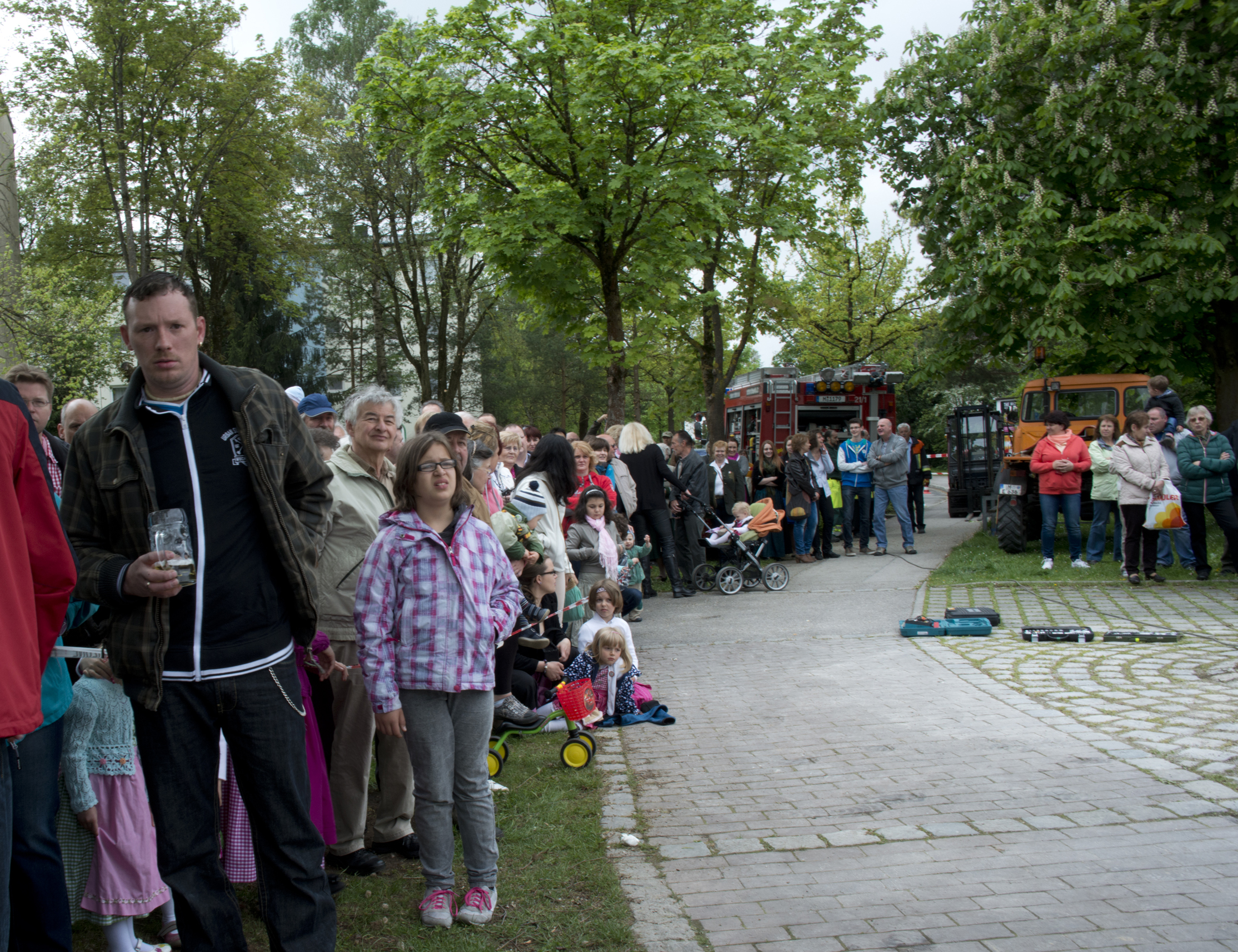 Eventually, too, the firefighters gathered and the pole was raised incrementally with copious amounts of checking, checking and double-checking in between small raises. There were guide ropes and support poles that had to be moved and adjusted between each raising, being careful not to damage the shingle brackets or lose control of the tree. The entire process took OVER TWO HOURS!
Initially there was a sawhorse positioned about mid-pole. As the lifters raised the pole, two men pulled the sawhorse closer to the base of the pole. After the stability was ascertained and the next move determined, a man with a megaphone who continuously stalked about would give the command, “Baum hoch!” Which means, “Raise the tree!” Then everyone would give a mighty heave and the tree would raise a few inches – excuse me – centimeters. Then the process would start all over again. I heard “Baum hoch!” a few hundred times that day.

An announcer told us the Maypole was about 24 meters high, which is approximately 26 yards or about 78 feet! It’s the trunk of an actual tree and has a large evergreen wreath with Bavarian blue and white streamers suspended from the top portion.

Here are some shots of the operation: 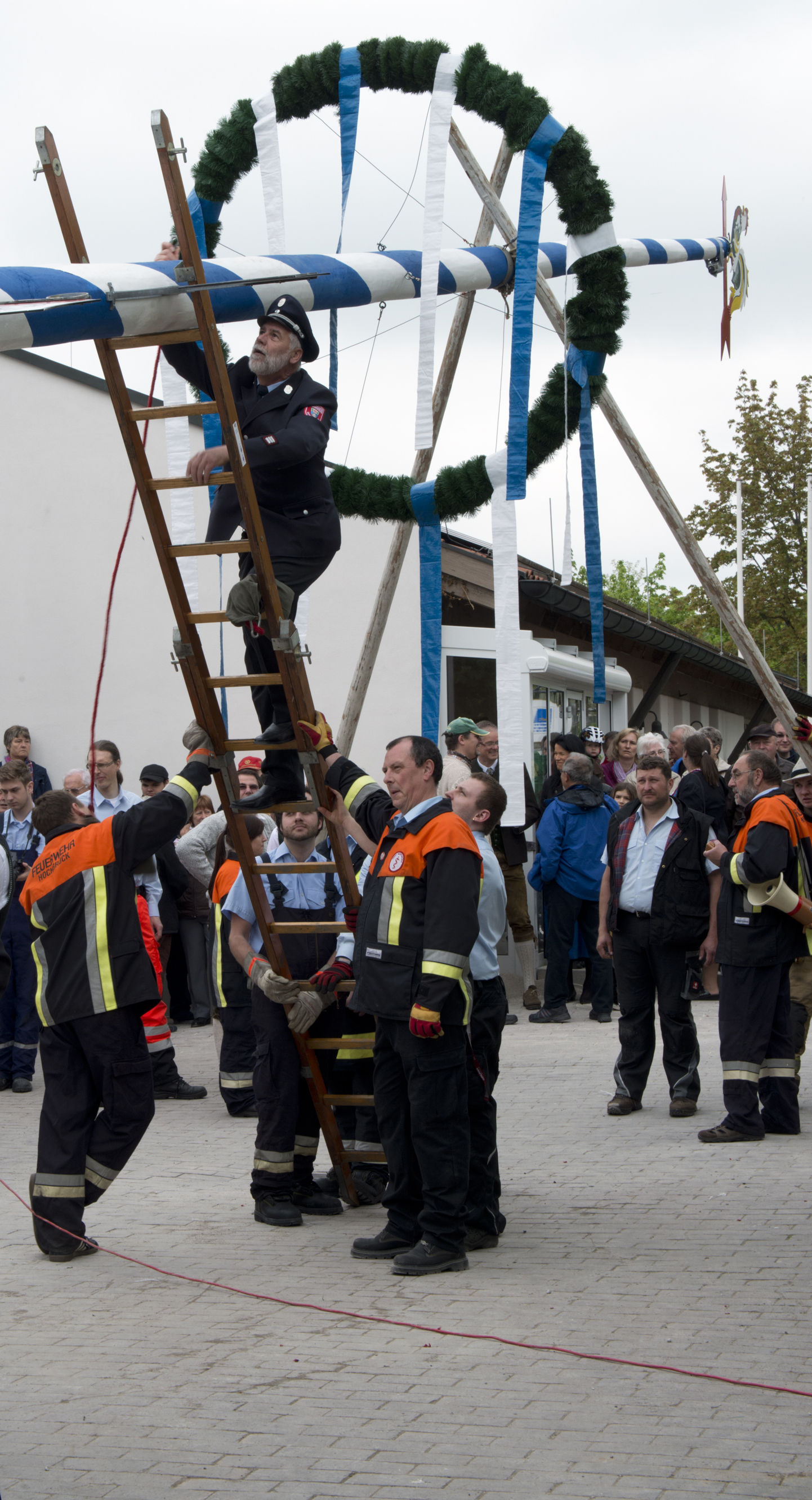 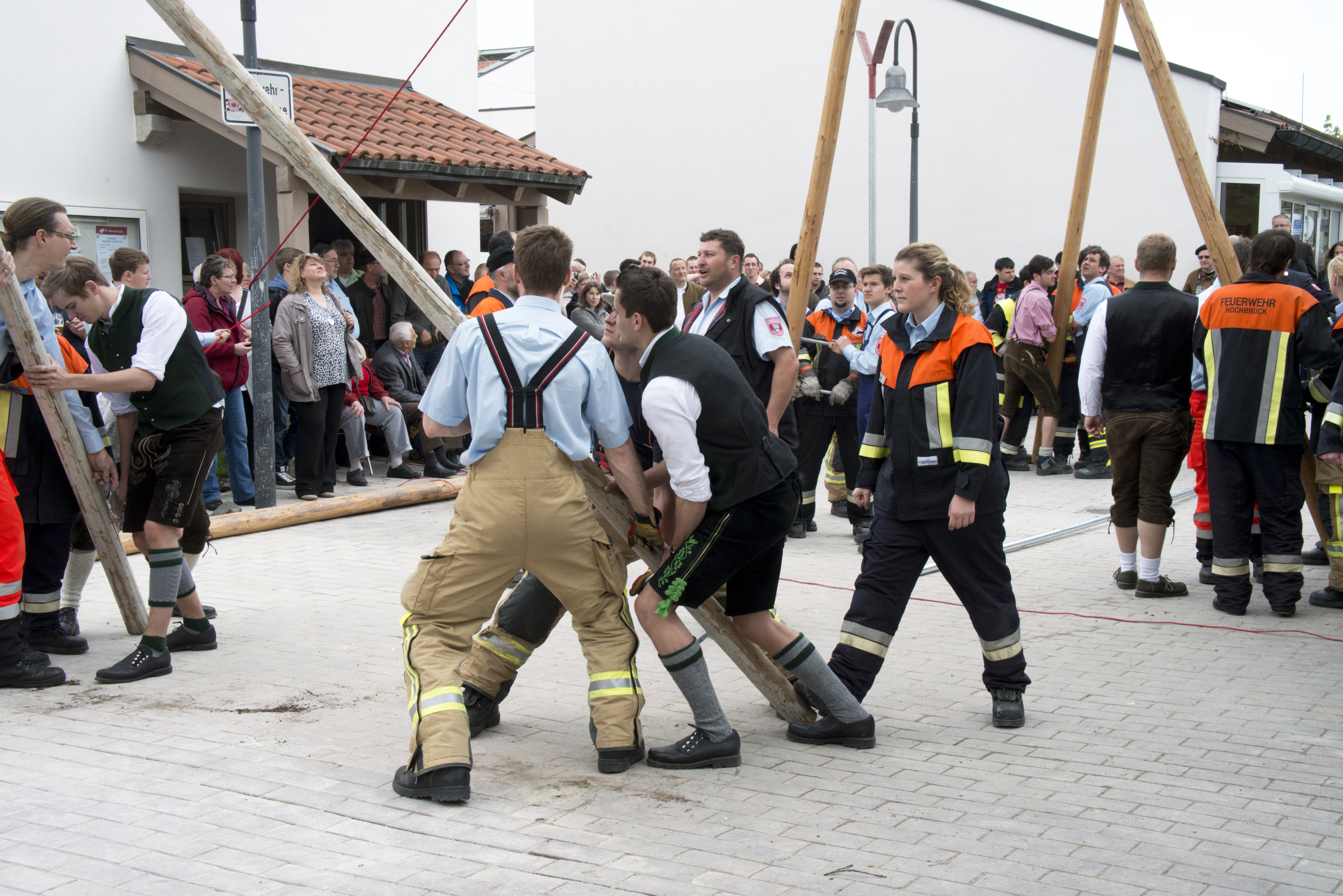 Here’s a guy tending the sawhorse looking suave in his typical fireman overalls: 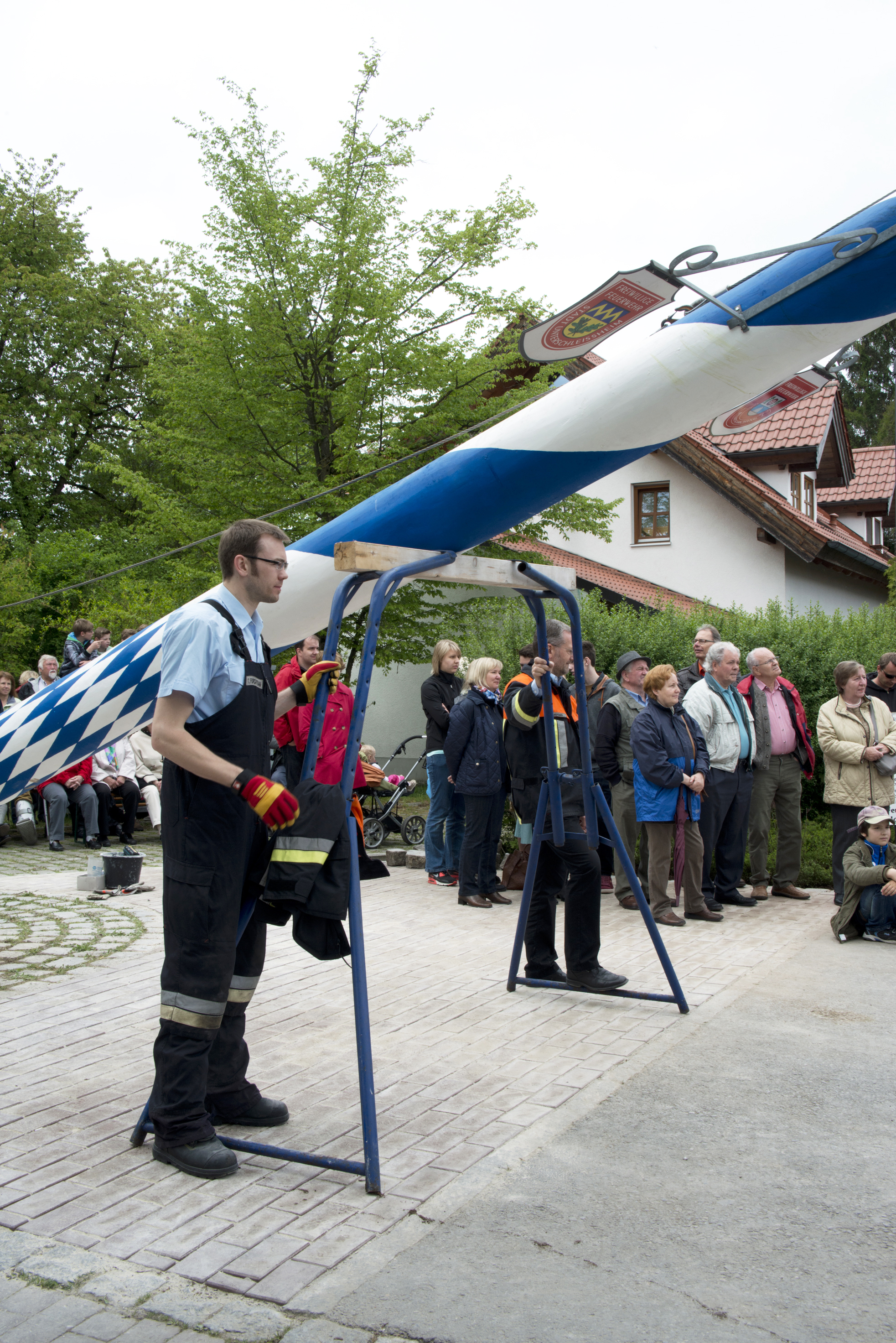 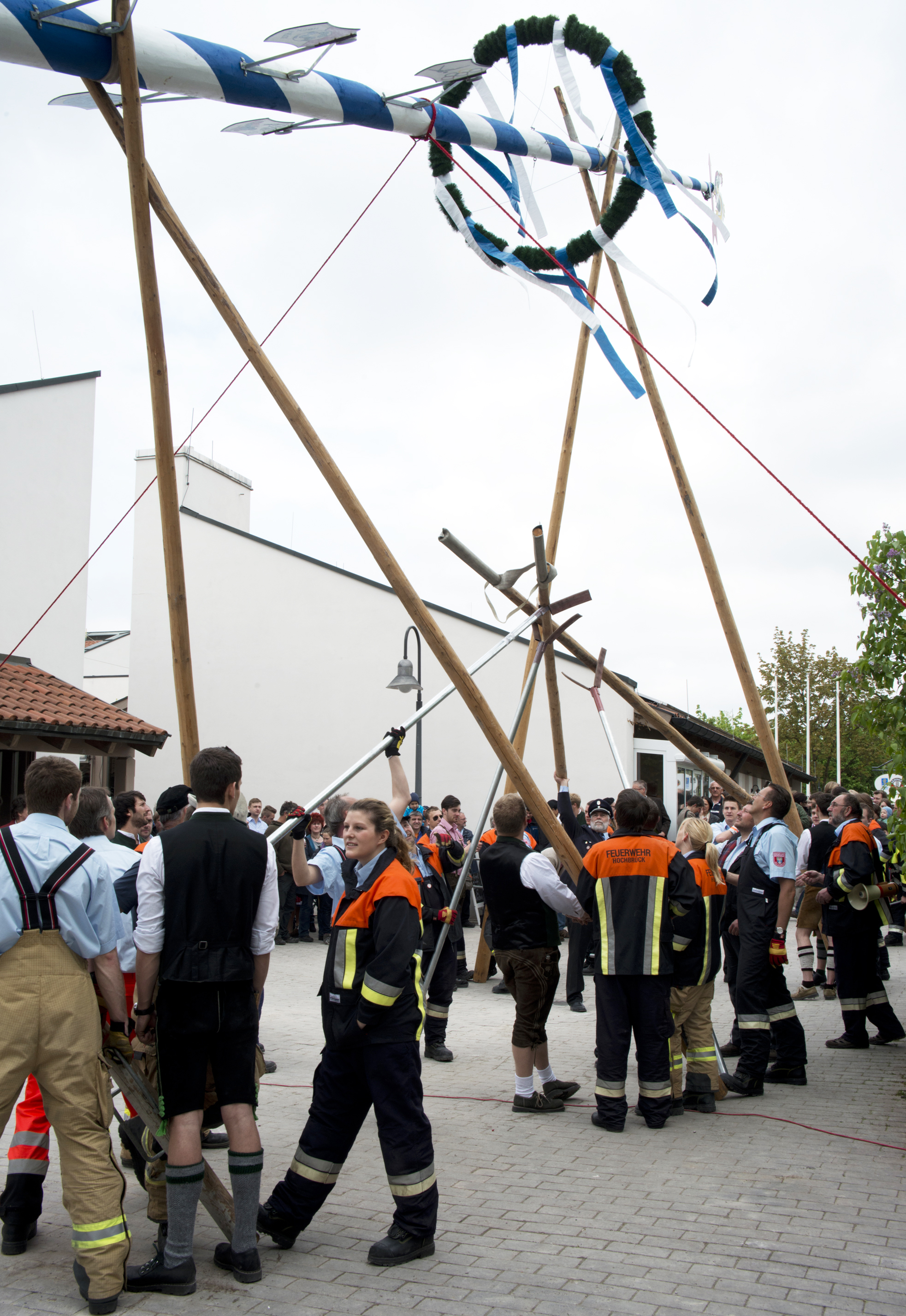 As the pole rose higher and the workers moved in front of me, I got a few shots of them close up: 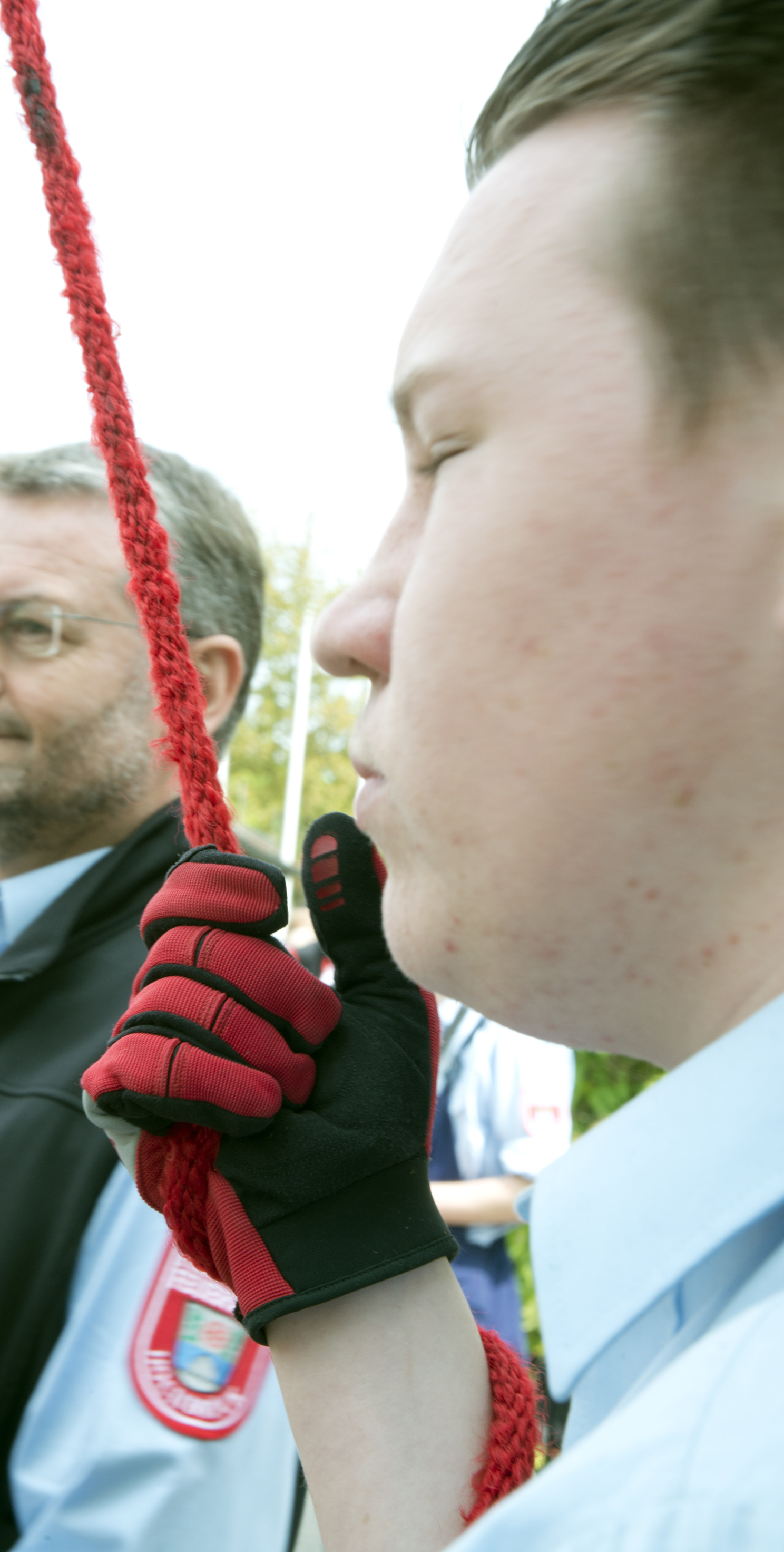 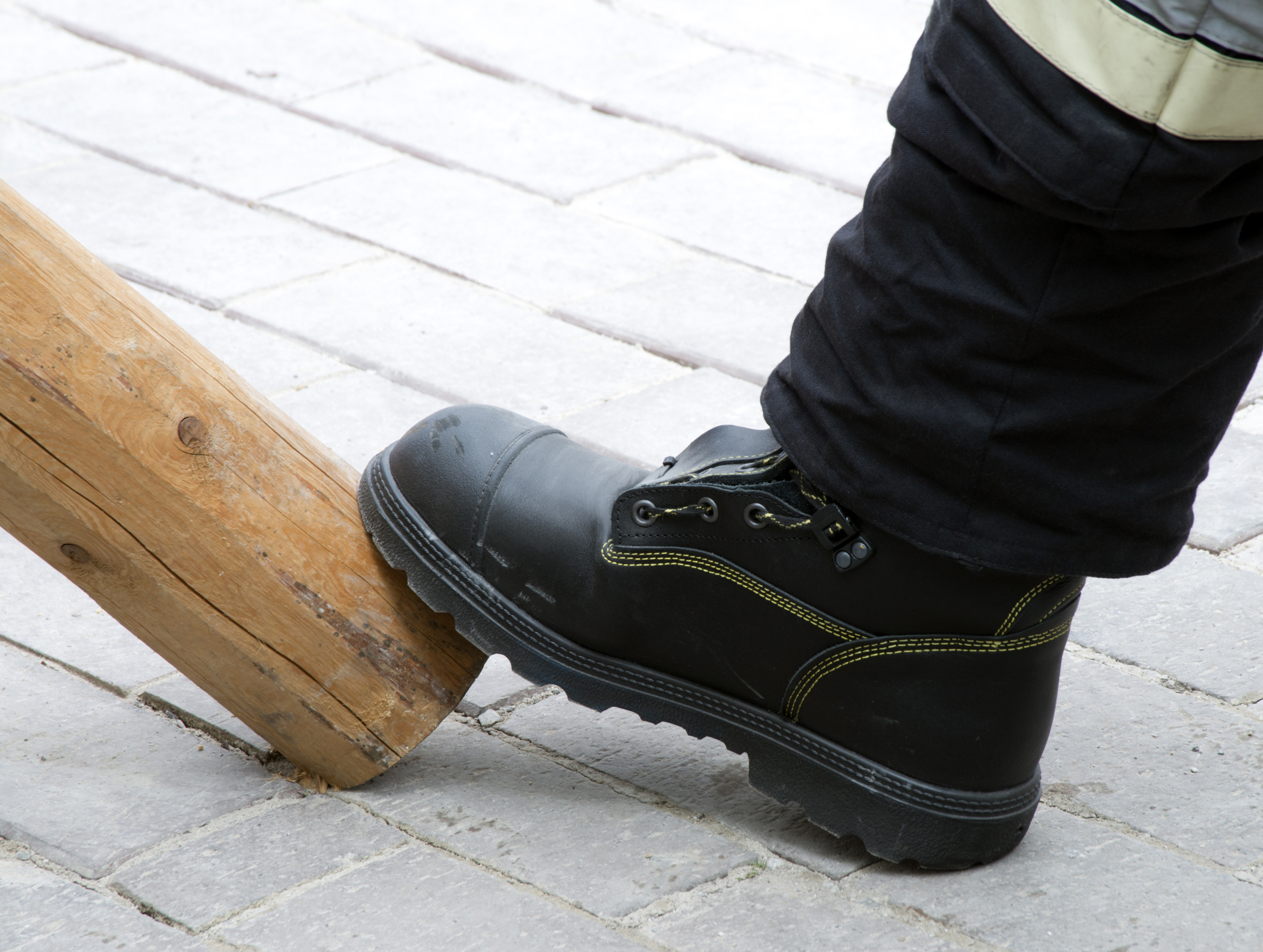 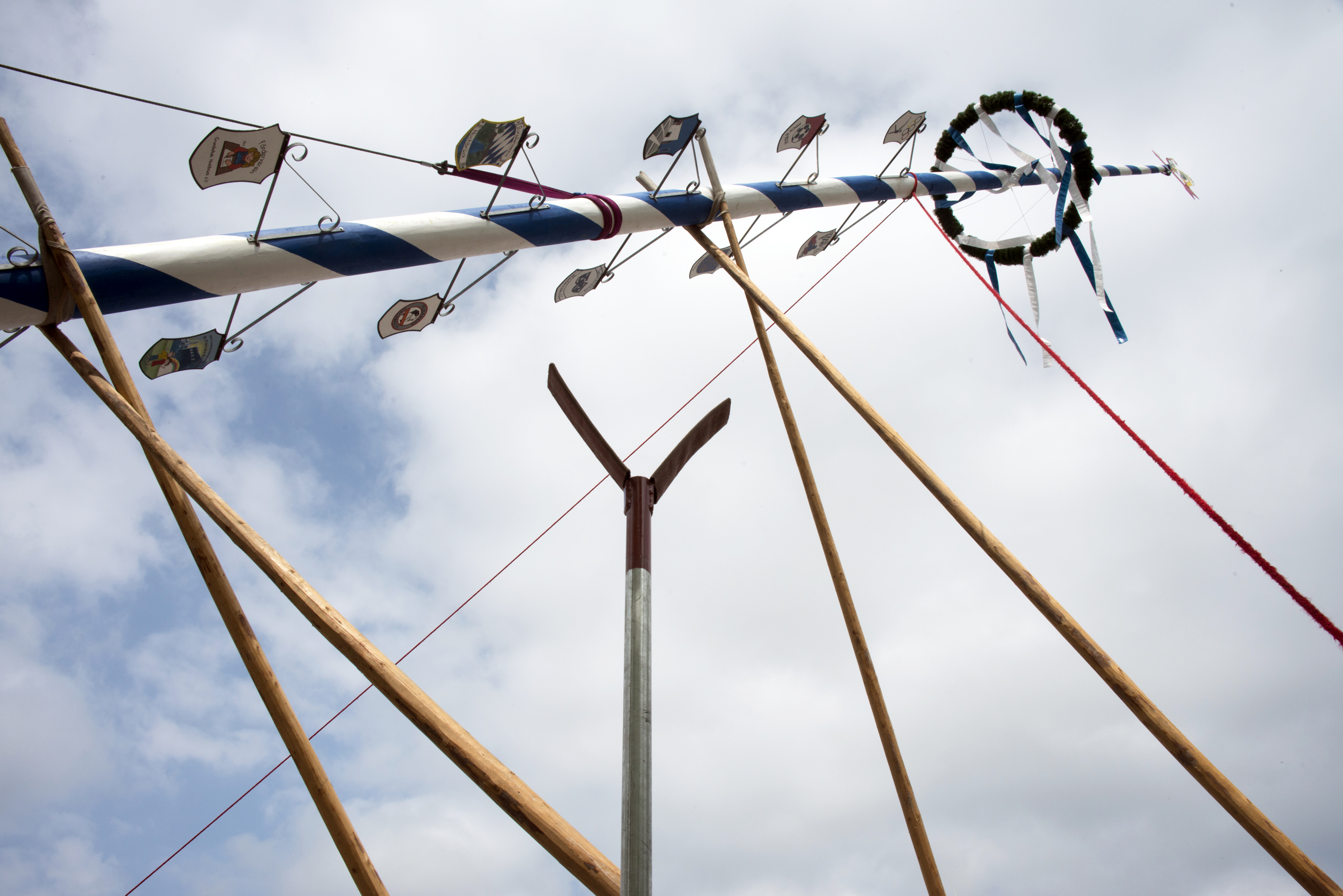 As the tree rose higher and higher in front of me, my lens was not wide-angle enough to get the whole Maypole in the frame: 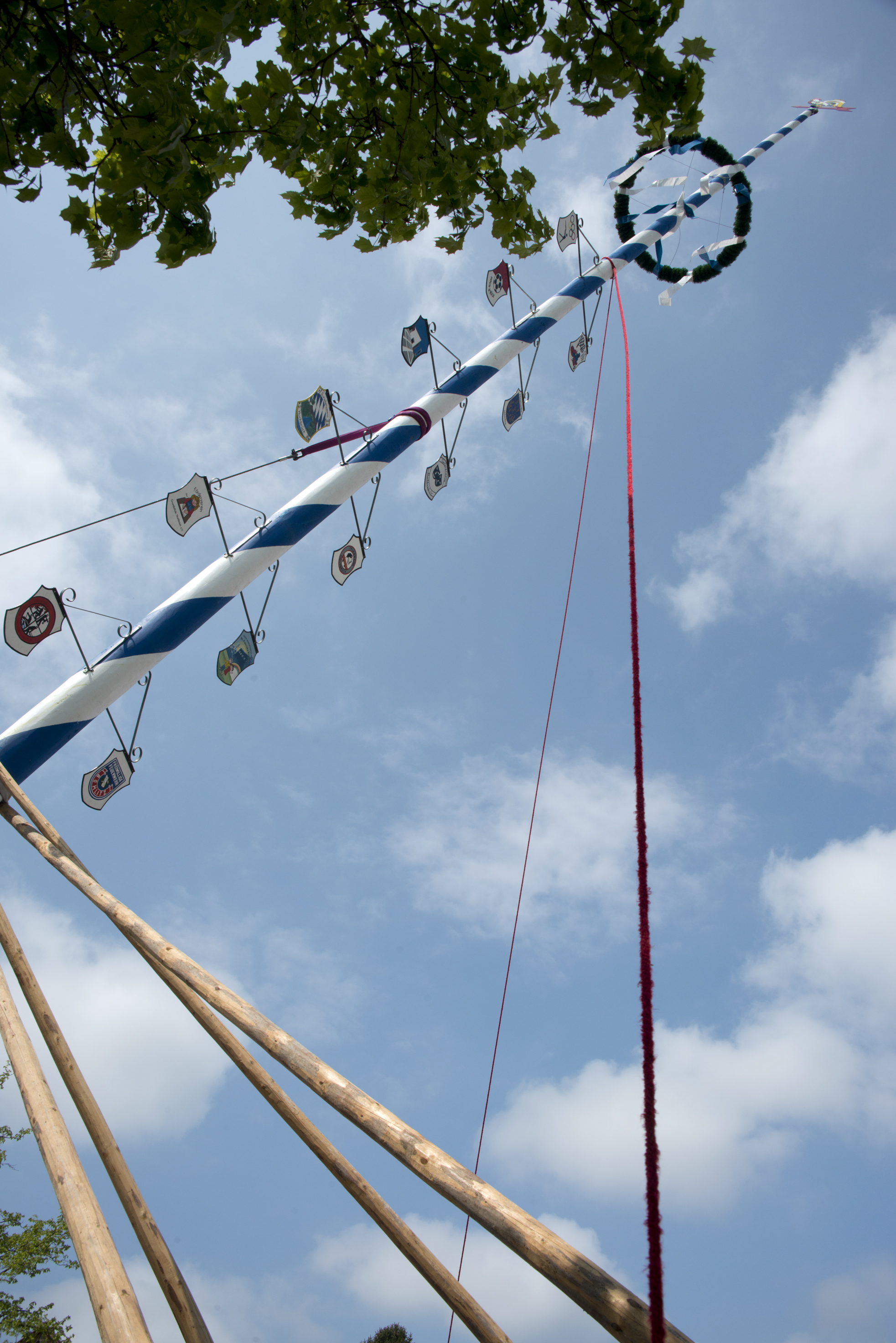 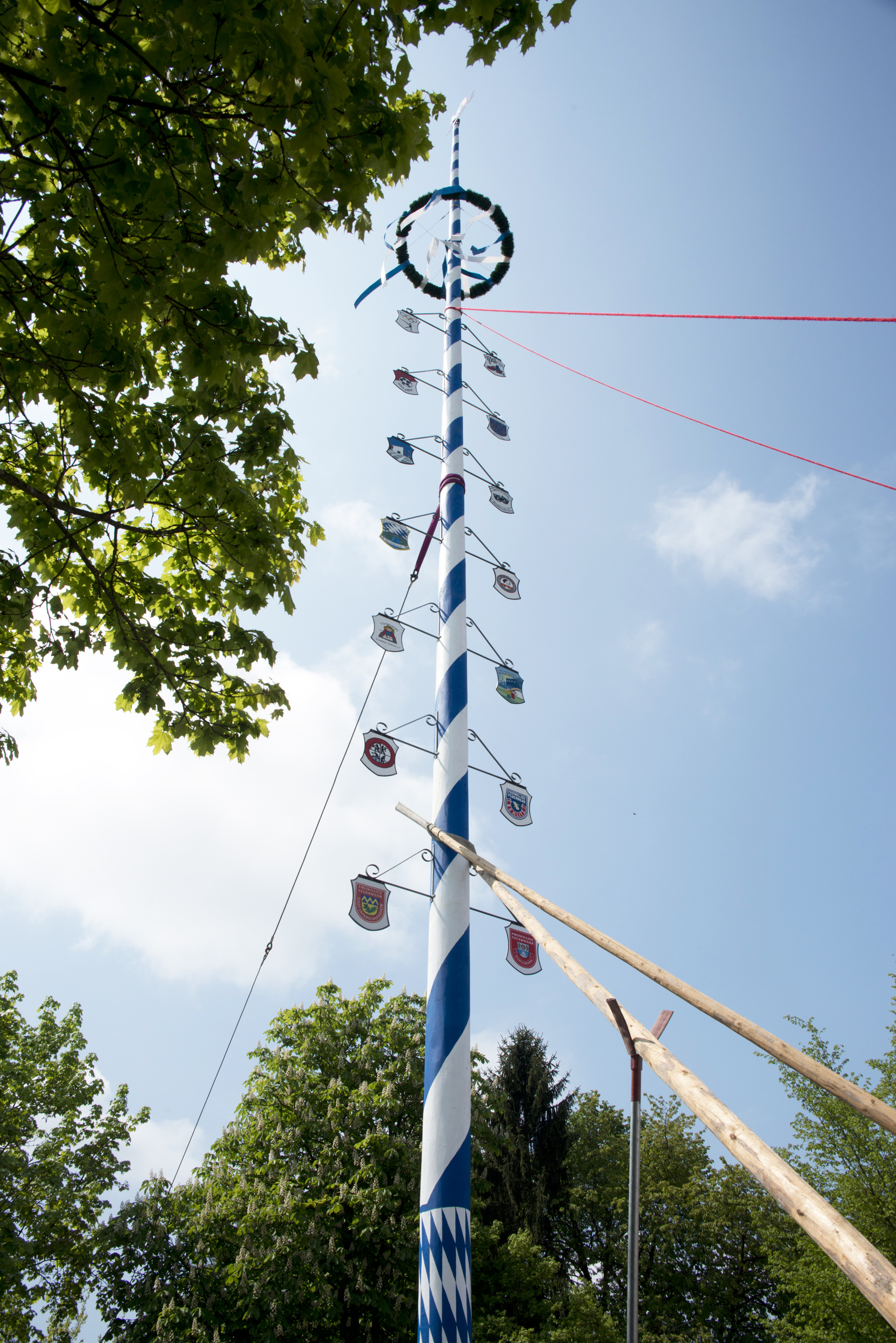 If I’d known I would be standing there for over two hours, I might not have taken up my post. But I did manage to record lots of video of the activities, so here is a video where I condensed all that time into less than five minutes, only showing you the actual movement of the Maypole toward its apex. You can see the sawhorse moved and the pole supports and the guy with the megaphone in there. (Music credit: Music credit: “Bin Hier Zuhause”, “Happy Medly Polka”, “Lucky Hannes”, “Tamys Polka” – Ludwigs Steirische Gaudi, ww.musikbrause.de; Creative Commons License (by-nc-nd)) I hope you enjoy it!

After the Maypole was perfectly perpendicular, a hulking man secured it into the steel bracket that had been sunk into the ground and stabilized a week or so before. He wielded two wrenches at once! 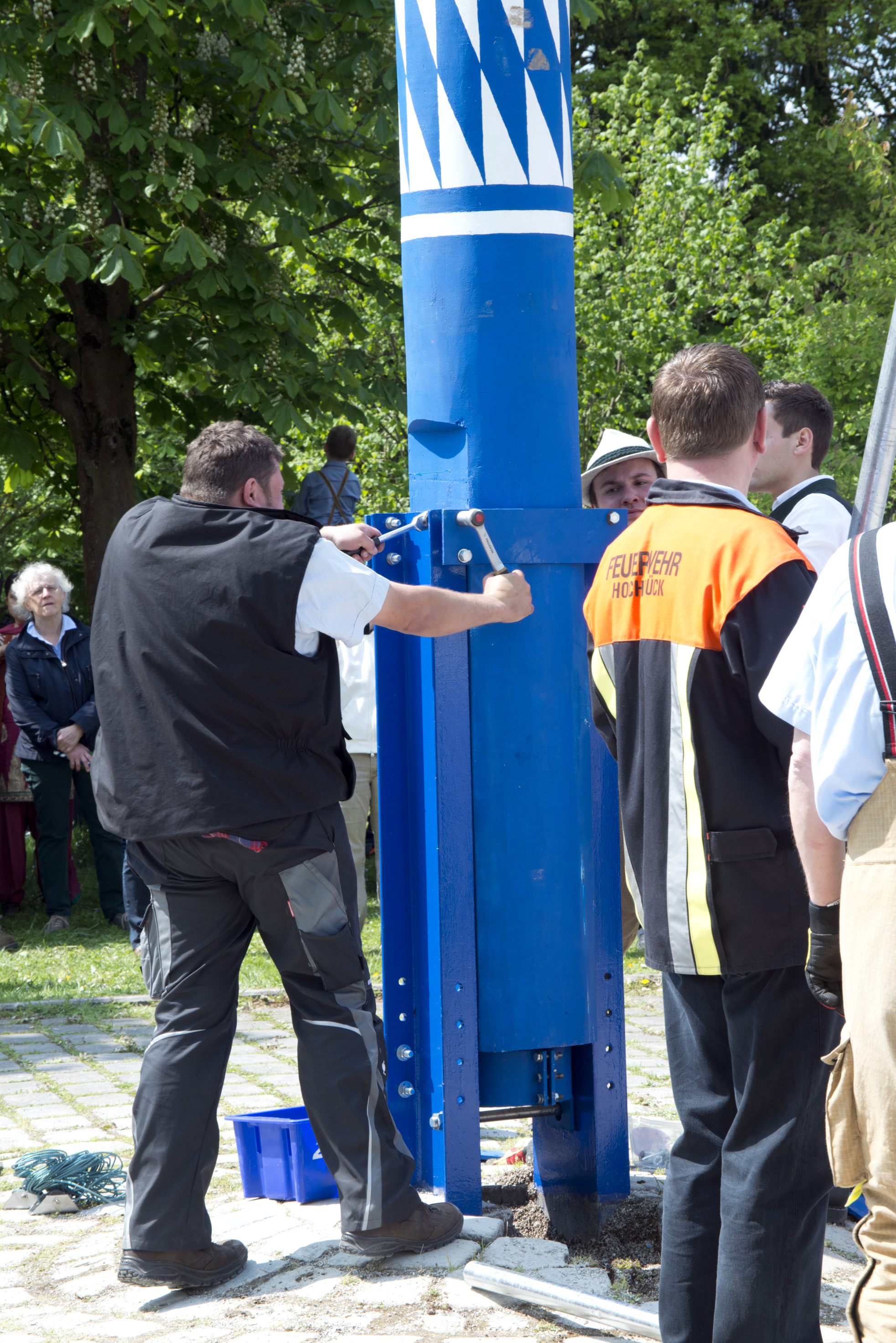 Then, of course, the Burgermeister had to say a few words: 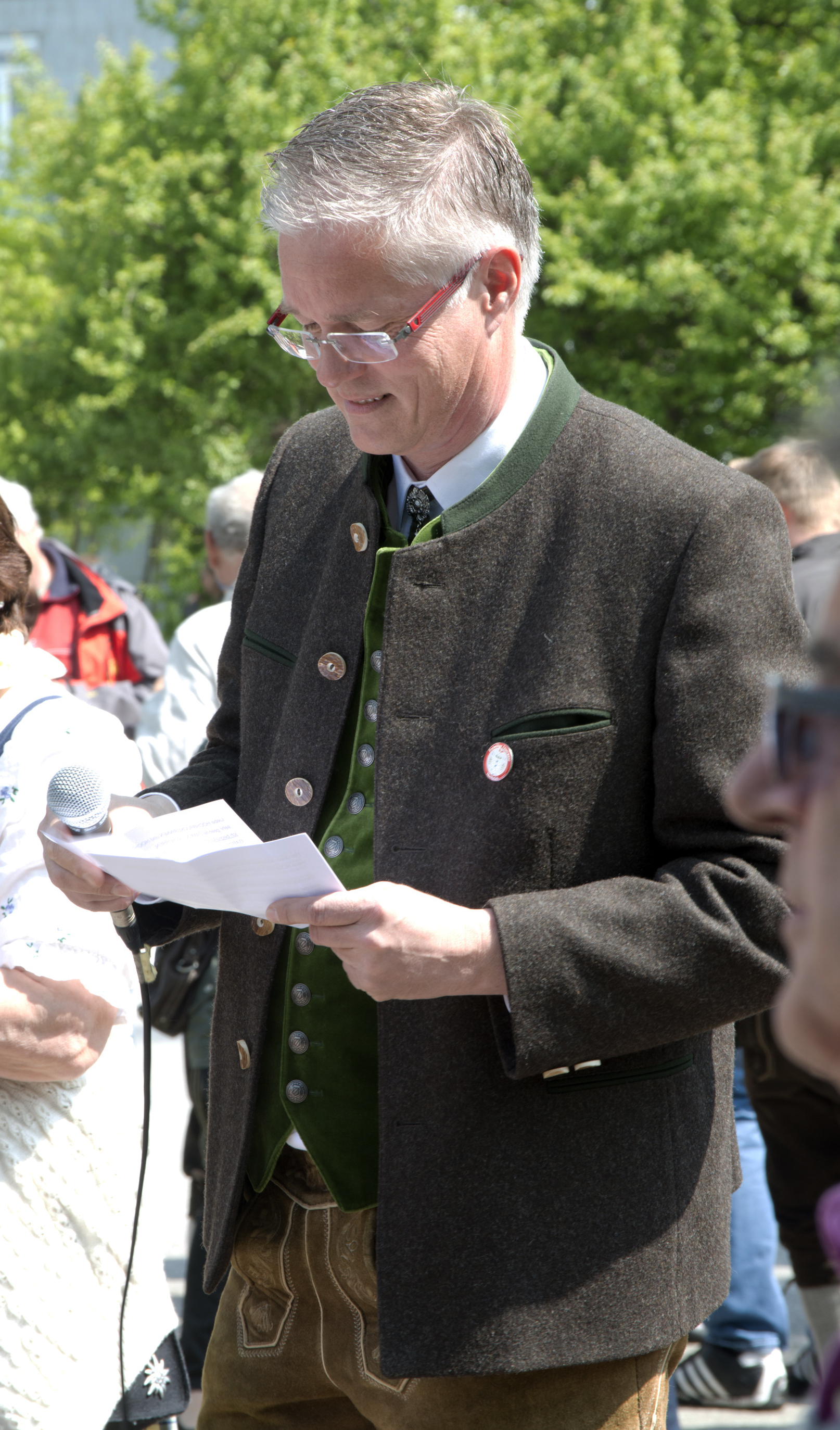 With all the work and formalities out of the way, it was finally time for beer and food! Here’s a big plastic chicken on top of a food truck: 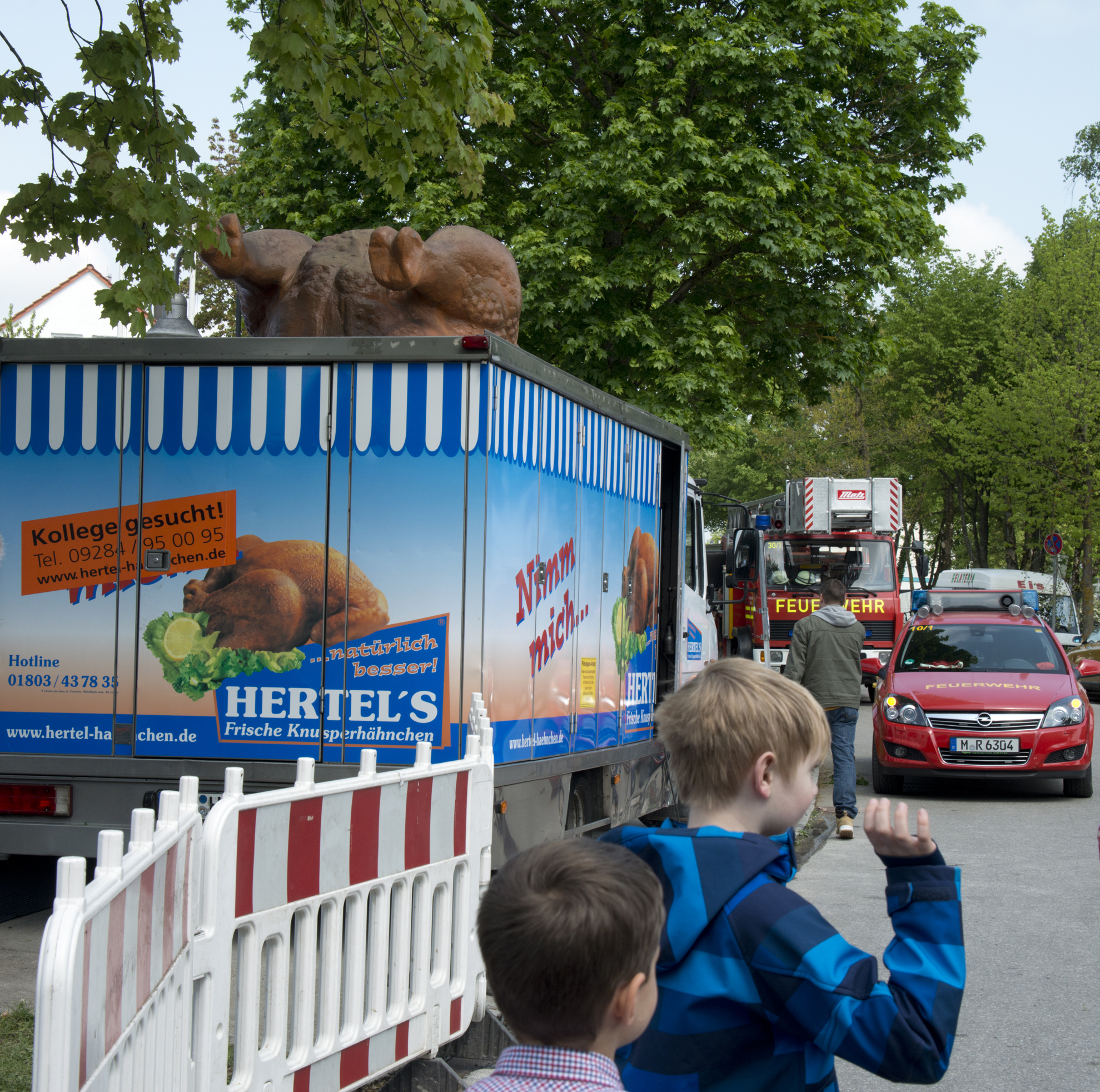 The most delicious schnitzel sandwiches were on hand. If you want to try your own hand at schnitzel, click on the “Shop all my books” – it’s in the A Travel for Taste: Germany cookbook. You simply make the schnitzel and put them directly onto fresh Kaiser rolls. It’s yummy! 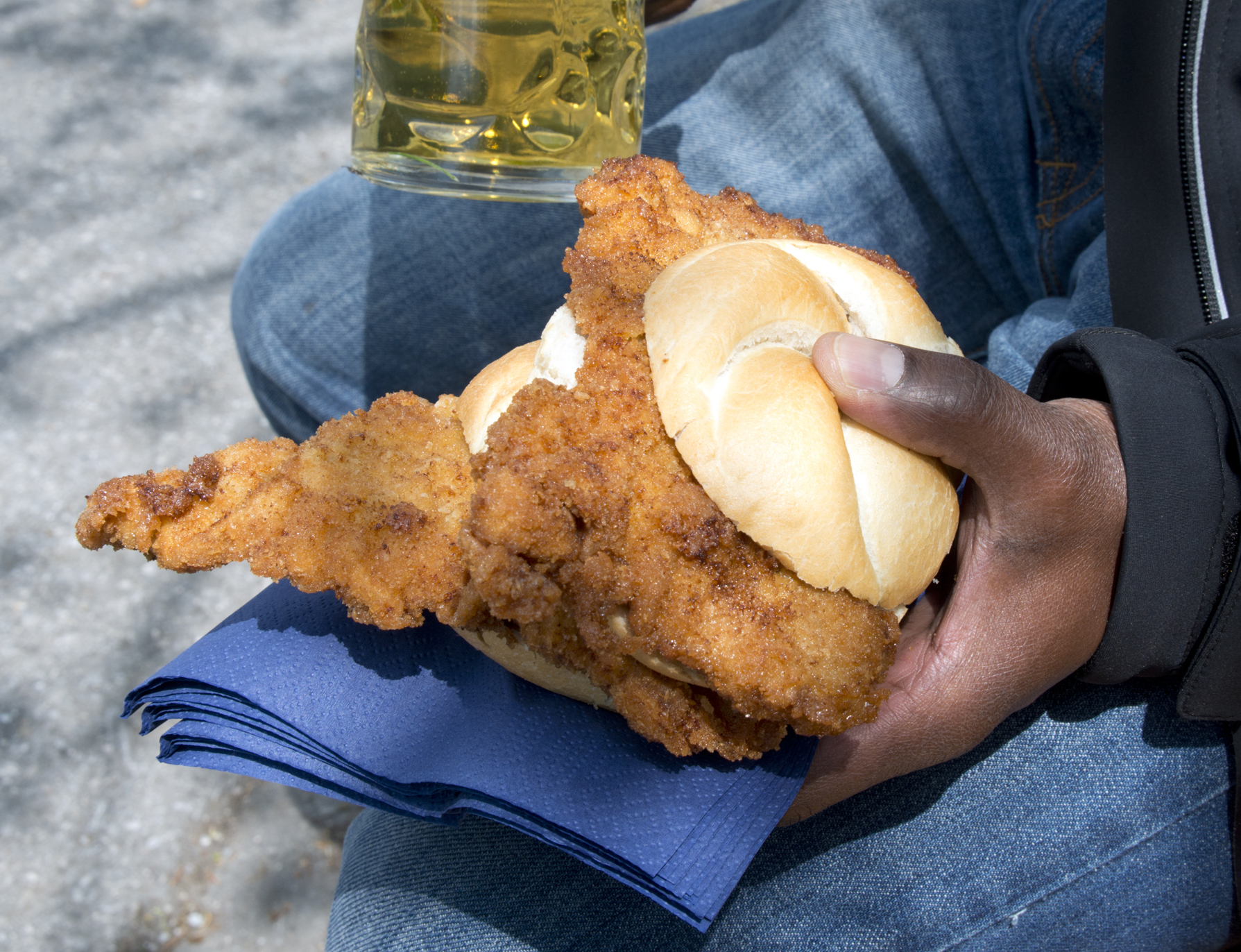 And, of course, some beer to help us celebrate: 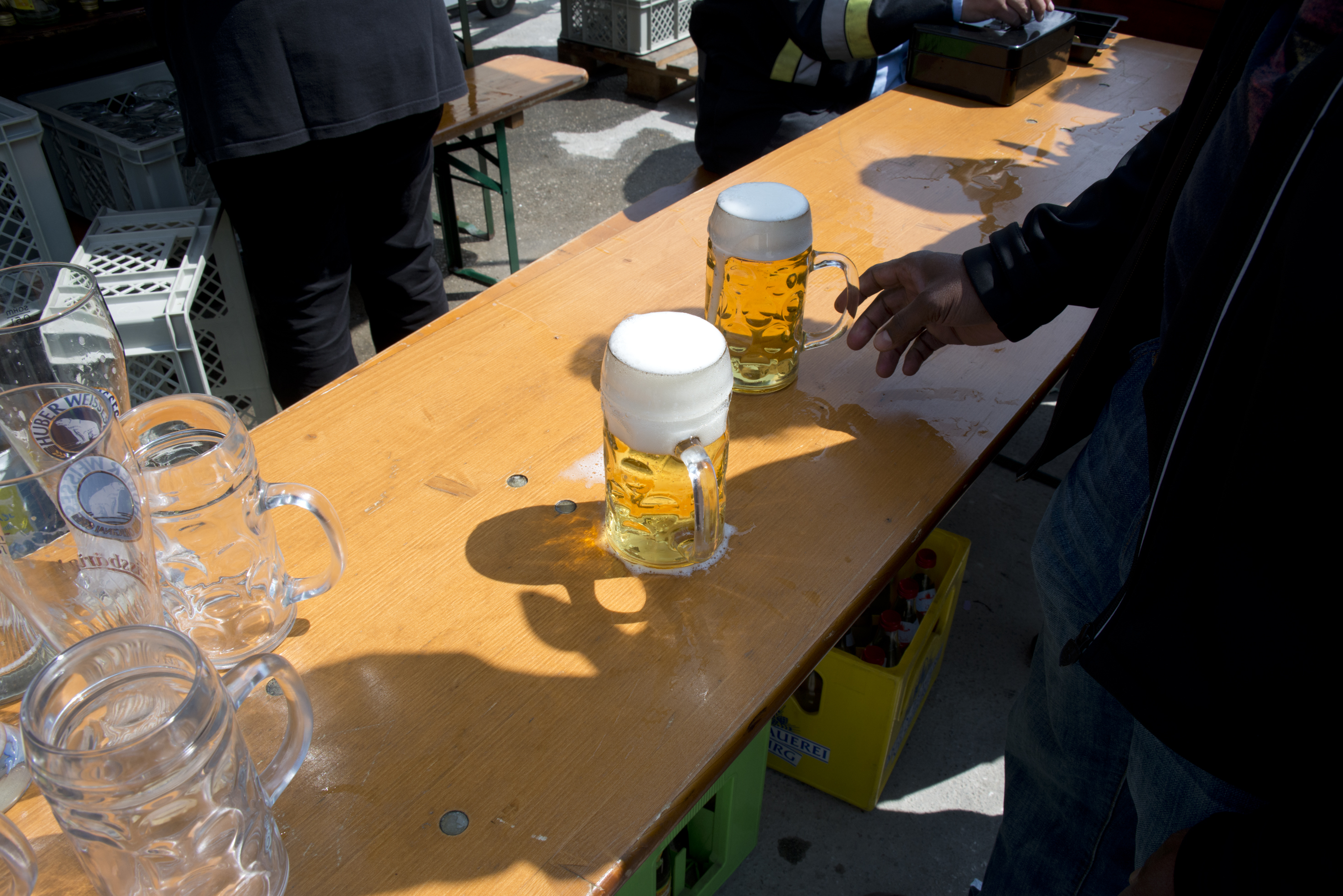 We wended our way to the back courtyard of the new Gasthaus, which will become, I’m sure, the Biergarten. The place is not officially open yet; that happens this coming weekend. But apparently there will be a gold stag and wild boar somewhere on the grounds: 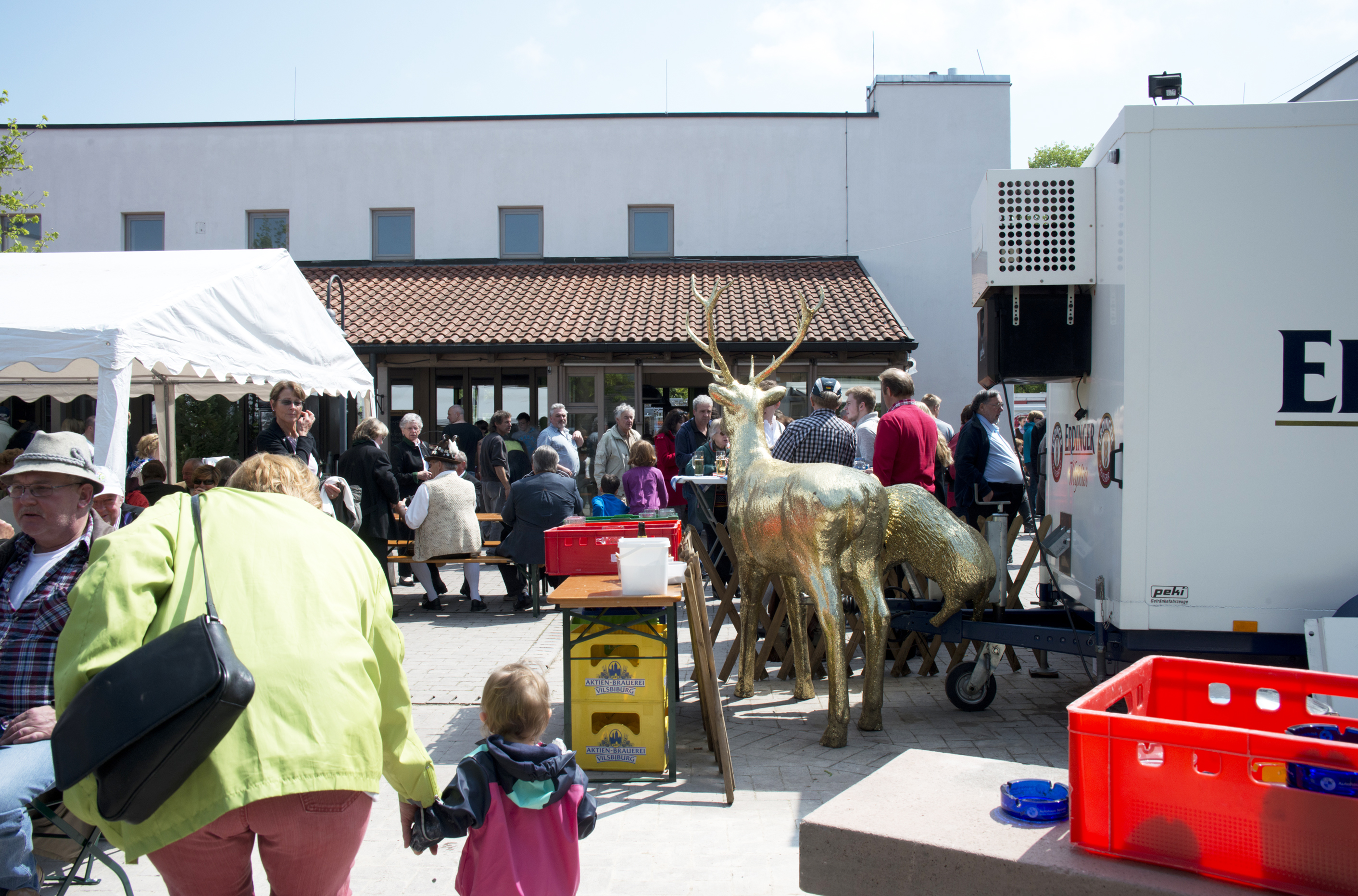 We took a break back to our apartment, thinking a nap would be a good idea. But it was wrong timing. They began doing the traditional Maypole dance while I was at home! I quickly grabbed the camera again and headed back out. I only caught the tail end of the streamer dance, but I managed to see the entire kindergartners’ performance. Here’s a video that condenses all of that. Keep your eye on the little girl in the pink apron – she’s quite a ham and I love the way she takes her bows at the end. (Music: “Bin Hier Zuhause”, “Tamys Polka” – Ludwigs Steirische Gaudi; ww.musikbrause.de; Creative Commons License (by-nc-nd))

During the day, kids could make their own little Maypole at a table set up near the big one: 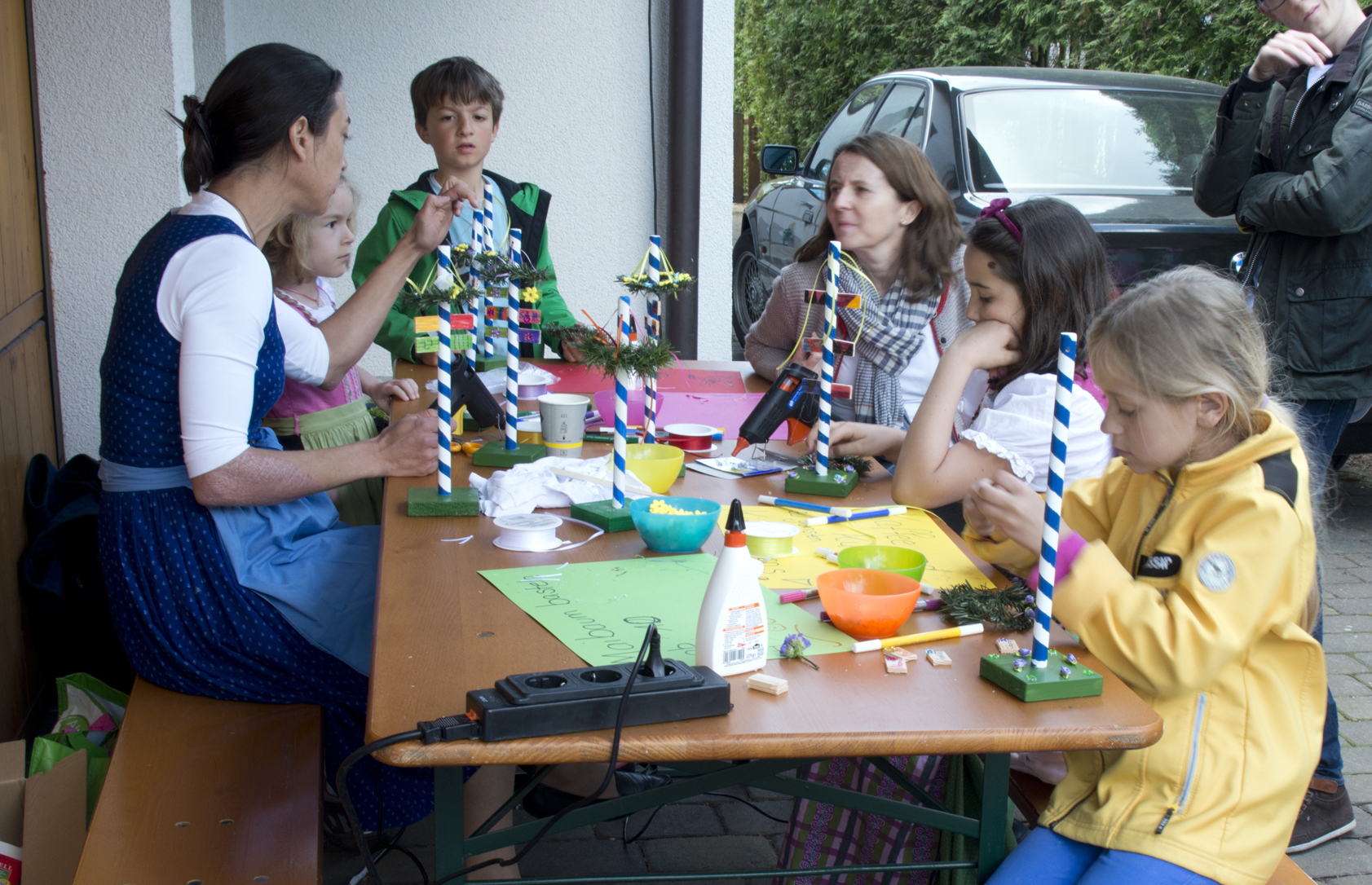 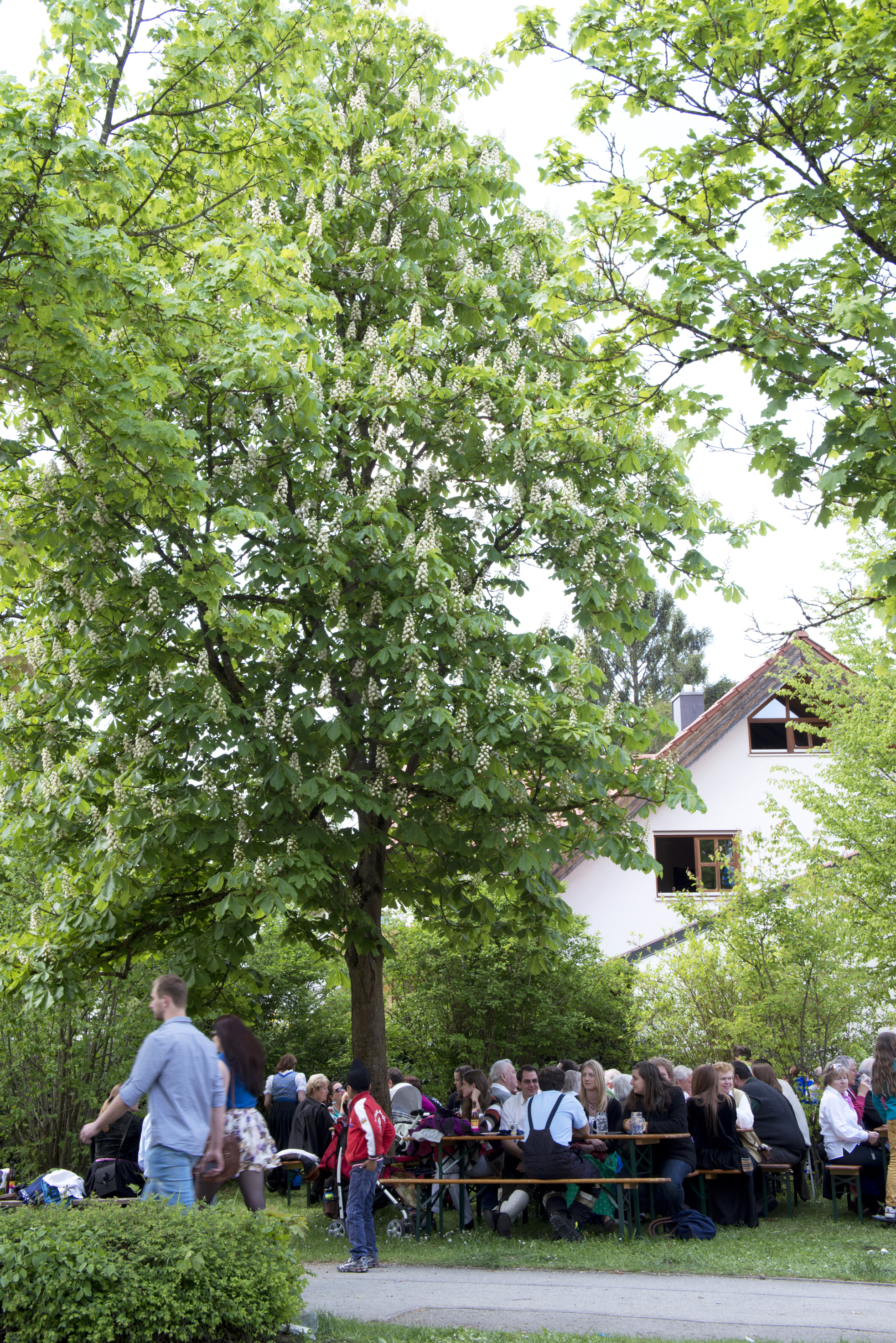 The music and partying continued long into the evening. Later there was a DJ and dancing and lots of drunken singing until about 11:15pm. I hope it’s not an indication of the weekends to come once the Gasthaus opens!

Some trivia for you: Why is Labor Day in the US celebrated in September? Encyclopedia Brittanica says:

In 1889 an international federation of socialist groups and trade unions declared the date of May 1 as Workers’ Day to commemorate the Haymarket Riot in Chicago (1886). Five years later, U.S. Pres. Grover Cleveland, uneasy with the socialist origins of Workers’ Day, signed legislation to make Labor Day—already held in some states on the first Monday of September—the official U.S. holiday in commemoration of workers. Canada followed suit not long afterward. 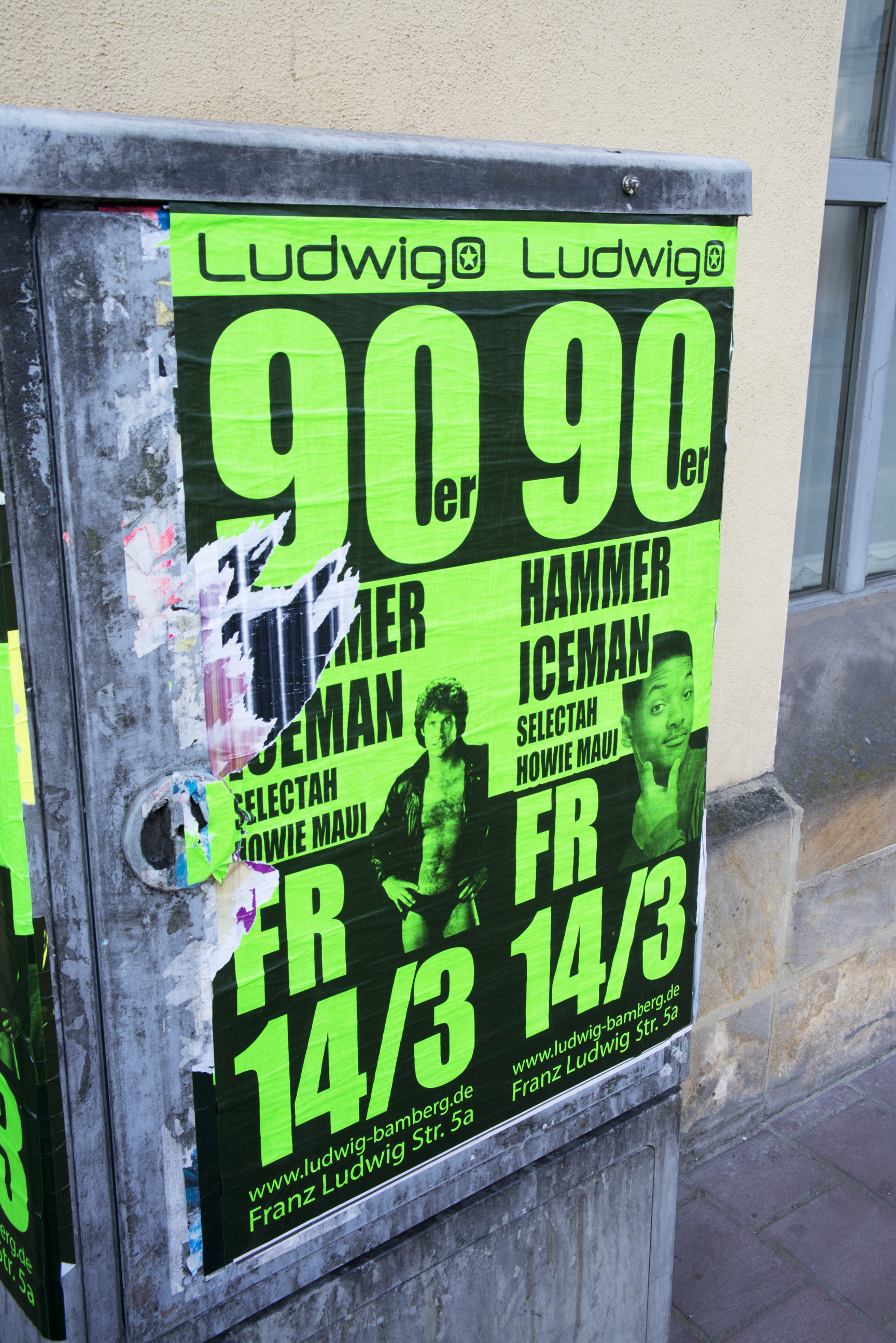 5 thoughts on “Raising the Maypole (Maibaum) in Bavaria near Munich”