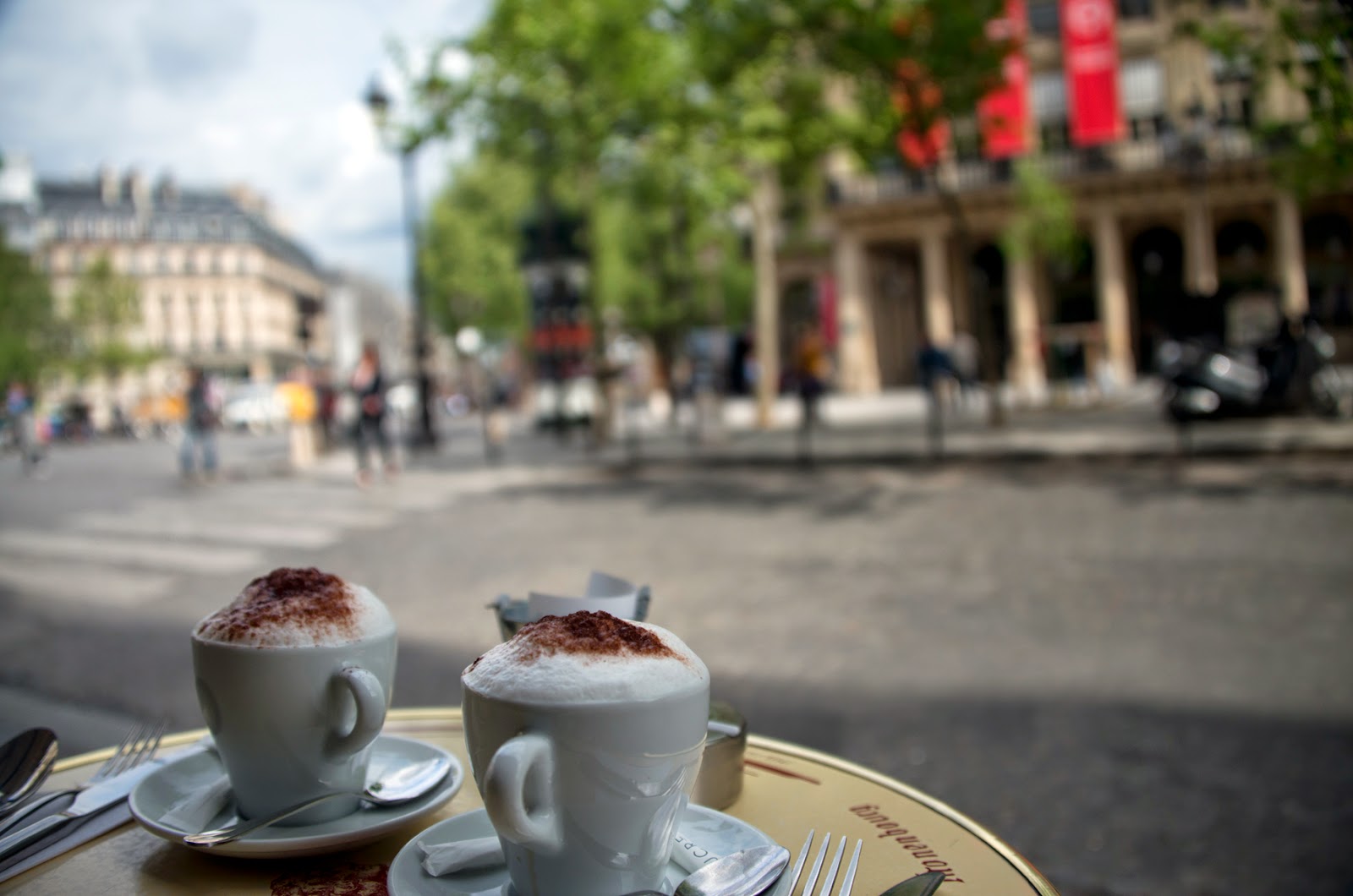 is published! Get your copy today –

makes a great gift for you, the photographer or the weirdly-humored in your life!

While you’re at it, COLLECT ALL FOUR PFNAR books – click here for the rest!

Just to make your mouth water, here is some of the amazing food we had on my trip to Paris a few weeks ago: 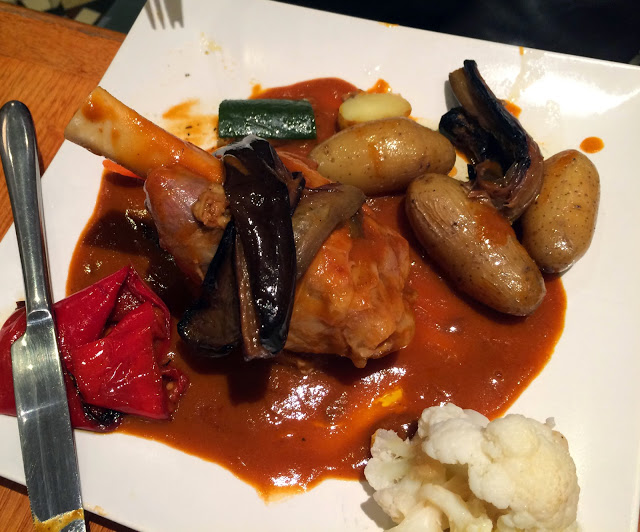 Cappuccinos at a sidewalk cafe near the Louvre: 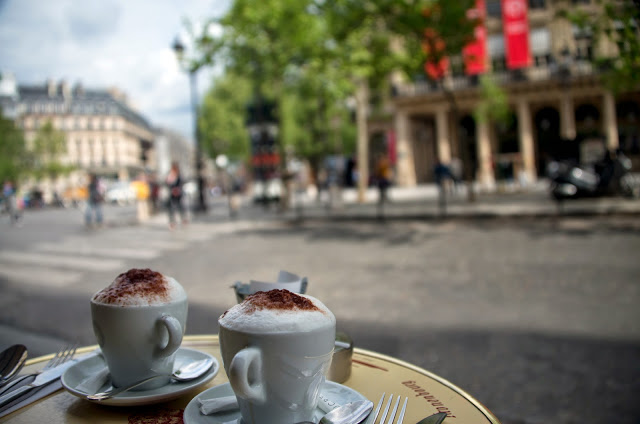 I uncovered an interesting fact about the word origin of “cappuccino” (and I always have to remind myself: two p’s and two c’s for the spelling). This espresso drink is named after the Capuchin monks, a strict order of the Franciscan friars. The Capuchin order was founded in Italy in 1529. Cappuccino has a brownish color resembling that of the cowls worn by the Capuchin monks. The South American Capuchin monkeys are also named after these monks because the hair on their heads resembles said cowl. 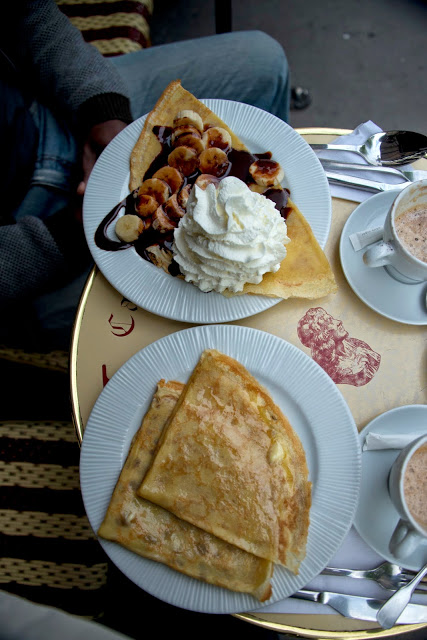 Cassoulet, a hearty white bean stew with pork and lamb: 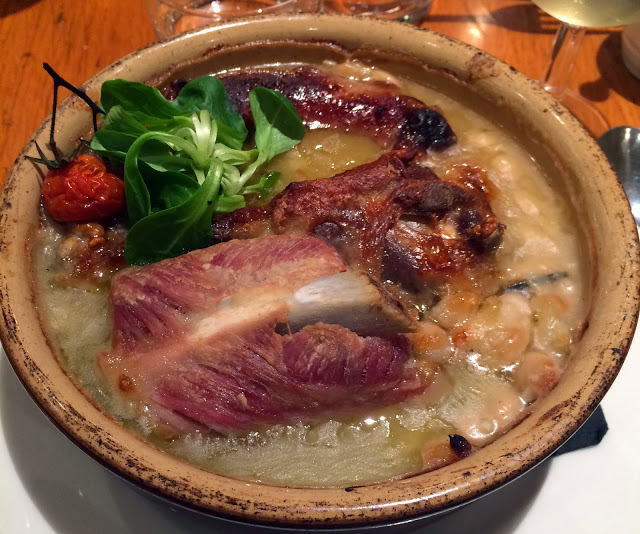 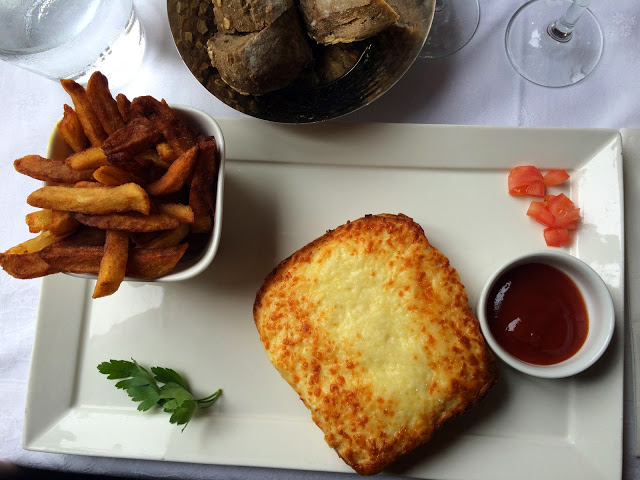 Ok, it’s just a grilled ham and cheese, but it was in PARIS and I got to order it by its French name. Incidentally, croq madame is the same sandwich with a sunny-side-up egg on top. Croq mademoiselle is apparently used on many menus for many different things, from light meals for dieting to desserts.

Pasta primavera (I forget what they called it in French): 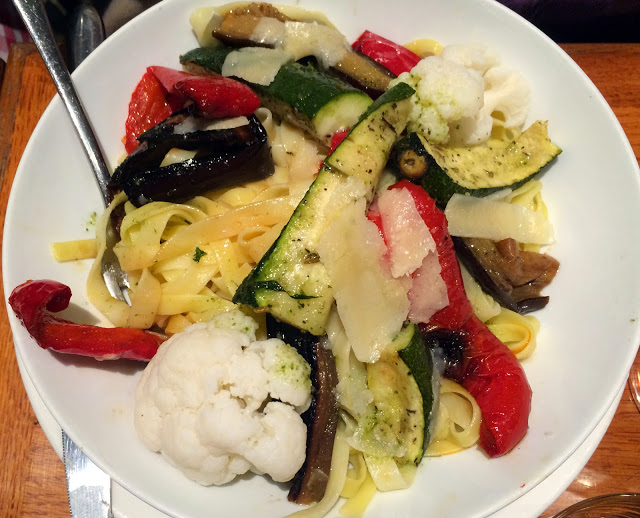 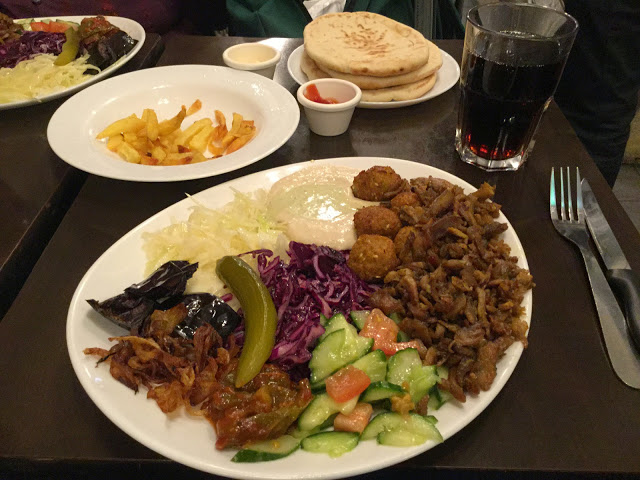 Those fried balls on the plate are falafel and the grilled meat beside it is the shawarma. Think of falafel as hush puppies made out of chick pea flour. Shawarma is meat, in this case lamb, grilled on a large spit and shaved off to serve, kind of like Greek gyros meat.

I had this meal at King Falafel Palace in the Jewish quarter. I’d only ever had falafel one other time. It was in the Czech Republic at an exchange program. The participants from Israel made it from scratch. Although Paris’ falafel was good, it was nothing compared to what my friends from Israel cooked up. I’ll have to dig up the recipe and share it with you some day.

Here are a couple of bakeries in Paris’ Jewish quarter: 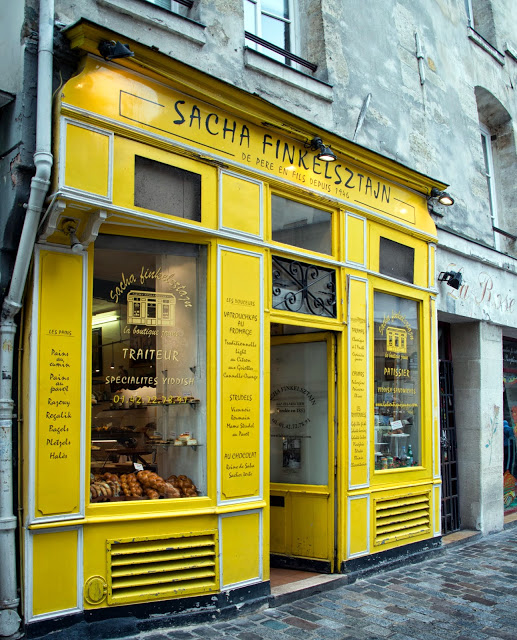 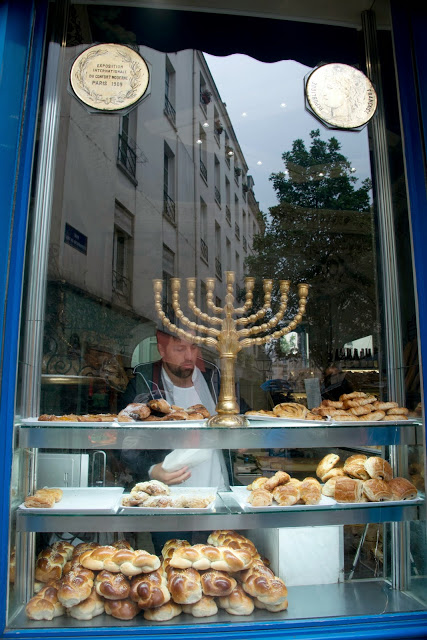 Steak and the BEST rosemary potatoes I’ve ever put in my mouth: 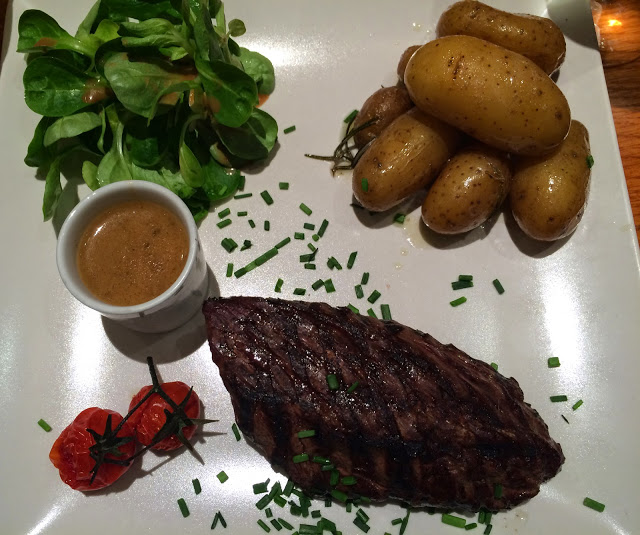 Here is where I learned that “medium rare” in Paris means “super rare” in my mind. I had to send this steak back to the kitchen because it was nearly raw. I saw this a couple of times, even with the delicious burgers they have in Paris. And after the tough, well-done burgers made of low-quality beef I find in Germany, they were a real treat.

I managed to get the recipe for the potatoes, by the way. I’m still trying to perfect it in my kitchen. Then I’ll let you know how to make them, too.

The grainy mustard that is on every Paris table: 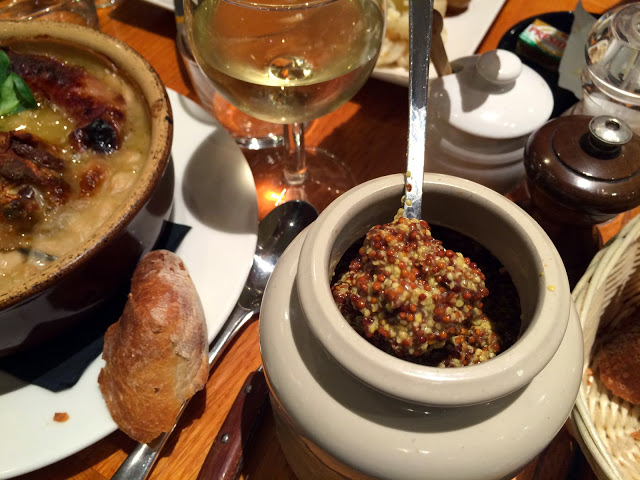 The best omelette my husband ever had: 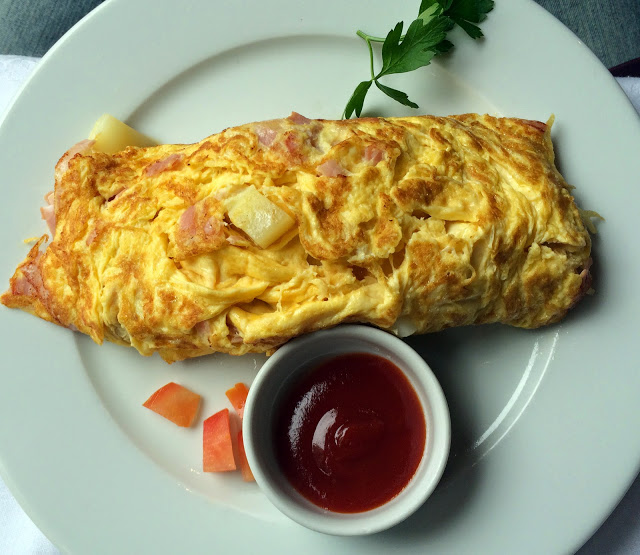 And, of course, no Paris food article would be complete without mention of the macarons, super-refined cookies with creamy, dreamy filling: 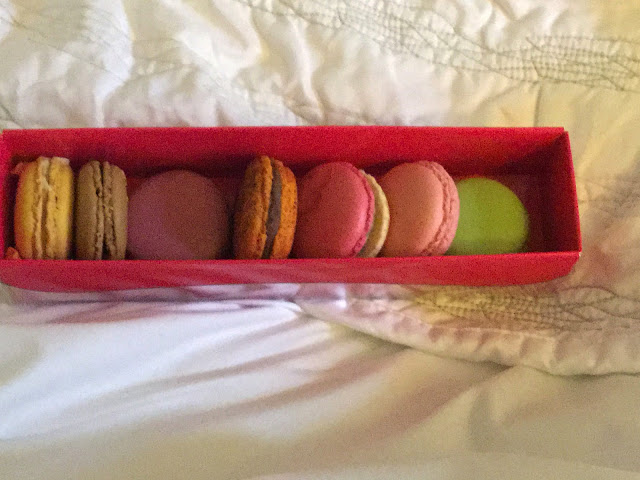 This is a Paris specialty, made with meringue (sweetened, whipped egg whites), and colors and flavors are added. The fillings vary, too. The French just know how to do desserts. And food in general!

Another sweet treat we tried were actually called meringues. Here they are tantalizing us from the shop display case: 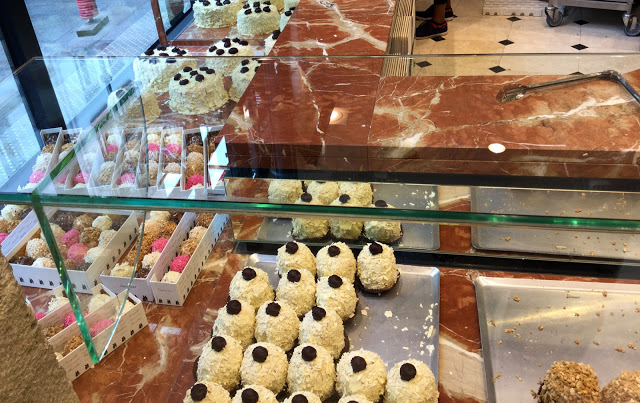 These are also made of whipped egg whites and coated with all kinds of different things from coconut to sliced almonds to chopped nuts. They melt in your mouth and are so rich you can only have one or two at at time. They also make a large, layer-cake version.
The shop famous for these dreams is called Aux Merveilleux de Fred. They have a fantastic chandelier, too: 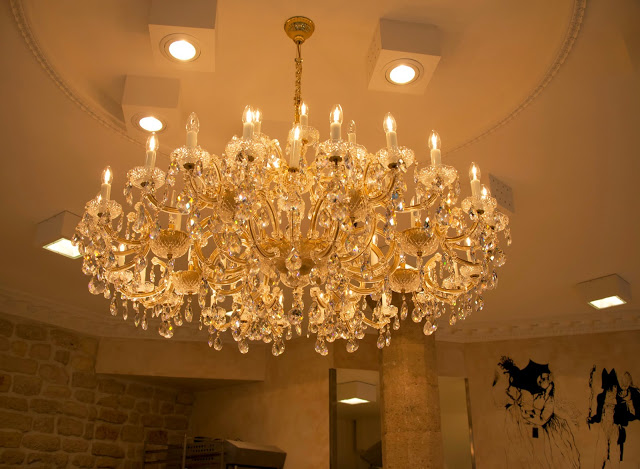 One more thing. I saw this sign in a café: 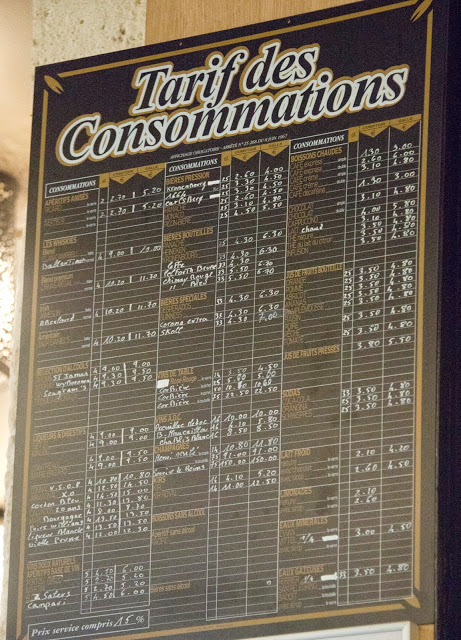 It brought up some blurry, vague memory from my French class in college; I think I remember seeing a picture like this in my French textbook. I did a little research and discovered that this is the old-fashioned menu. It is evidently still required to be posted in cafés and restaurants. Two or three prices are listed for each item. The cheapest is for those who consume the item standing at the counter or bar. The second, higher price is for customers seated at a table inside the establishment. The highest price is for people eating outside at the sidewalk tables.

I think the logic is the farther the waiter has to go, the more it costs you. Which makes sense considering they make a living wage and no one tips much in Paris compared to what we do in the States. So if your bill is higher than the paper menu you were given by the waiter, you are probably sitting outdoors. I’ve seen the same thing in Germany, too.

Well, if you aren’t hungry now, there is something seriously wrong with you. Thanks for joining me on my culinary tour of Paris!

Note: Thanks to my husband, James H. Tolliver, Jr., for taking some of these pictures during our travels and allowing me to use them here. 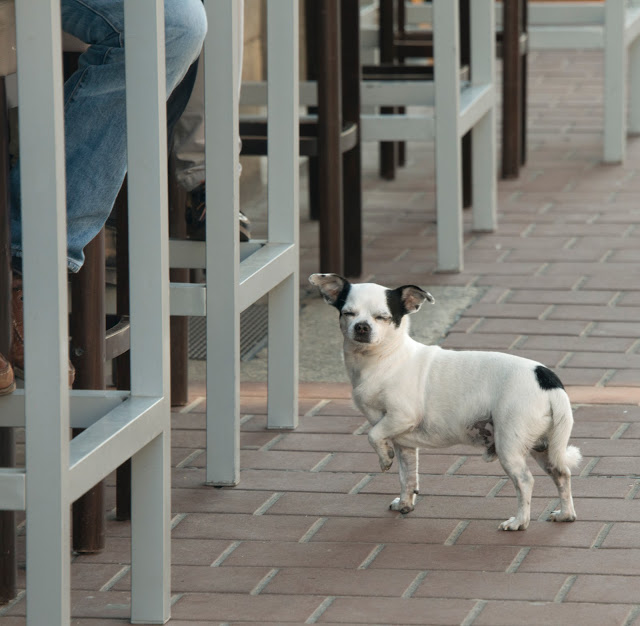