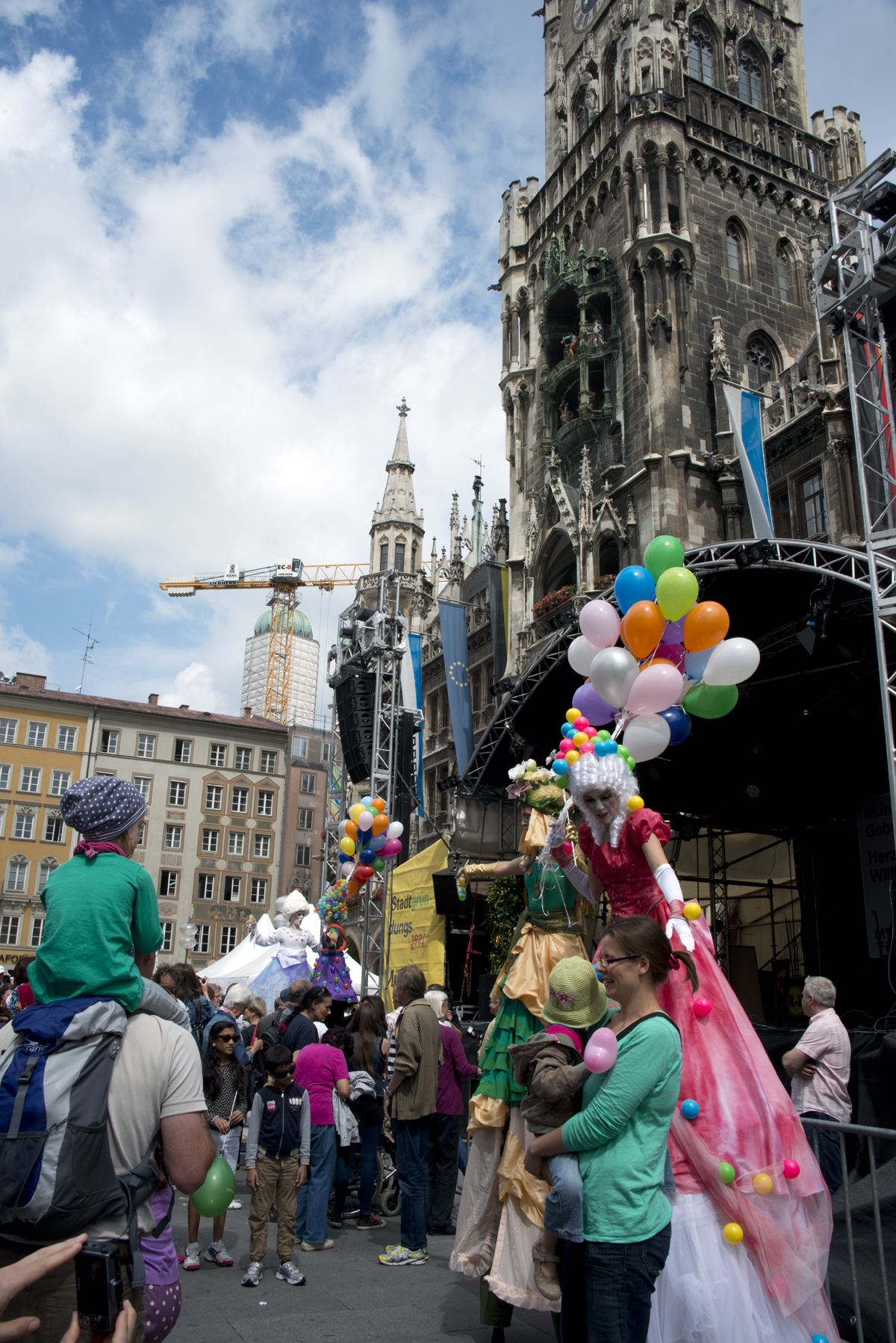 Click the images below to order them on Amazon.com today:

Wonderful gifts for you, the photographer or the weirdly-humored in your life!

I’m learning that, for life here in Munich, it’s best to check the events calendar in advance and possibly even make reservations for weekend events. The trip downtown from where I live via public transport is complicated by subway track construction (we have to take a detour on a bus instead of riding straight in). BTW, no one drives into Munich! Plus the city gets so crowded on weekends, especially in the good weather we’ve been having.

But last weekend we got lucky. On Saturday morning my husband and I checked online and discovered it was Munich’s birthday and they were having a Stadtgründungsfest (“City Founding Party”). Going strong after 856 years, wow! We had no idea. Are we bad citizens?

In honor of the anniversary, the city was putting on a street fair so we made the trek early. We have learned to go as early as possible to avoid the crowds. If we plan so that we’re done by noon we can still manage to walk around fairly freely. After that, it’s shoulder to shoulder and no fun.

We arrived by subway at the Odeonsplatz stop, which was one end of the street fair. The other end was the famous Marienplatz where the Glockenspiel resides, about half a mile away – an easy walk on this mild, sunny day.

The Munich city walls were torn down in the 1800s. To build Odeonsplatz they tore down a 500-year-old city gate. Odeonsplatz then became the grand entrance to the city.

We emerged from the subway to see the square populated by beer tables and umbrellas with small wooden stalls around the perimeter. The stalls were occupied by modern-day handworkers and artisans, such as metalworkers, contractors and roofers. 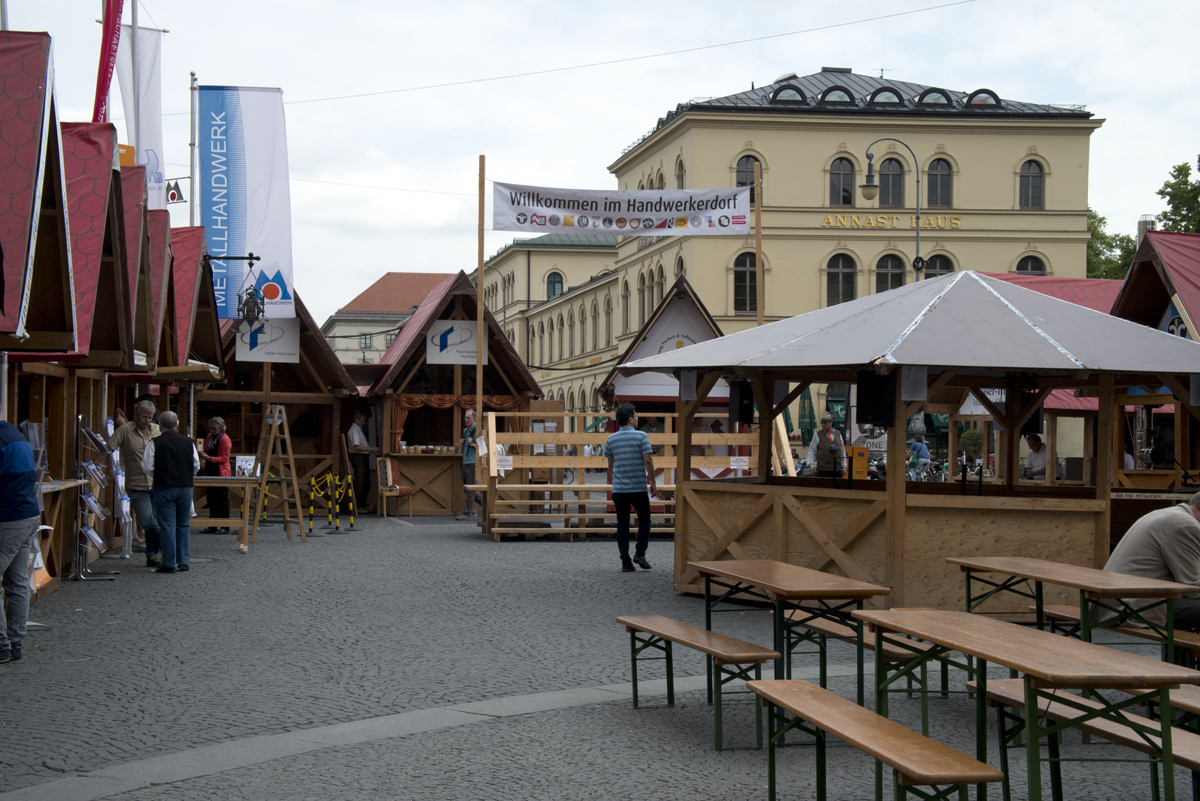 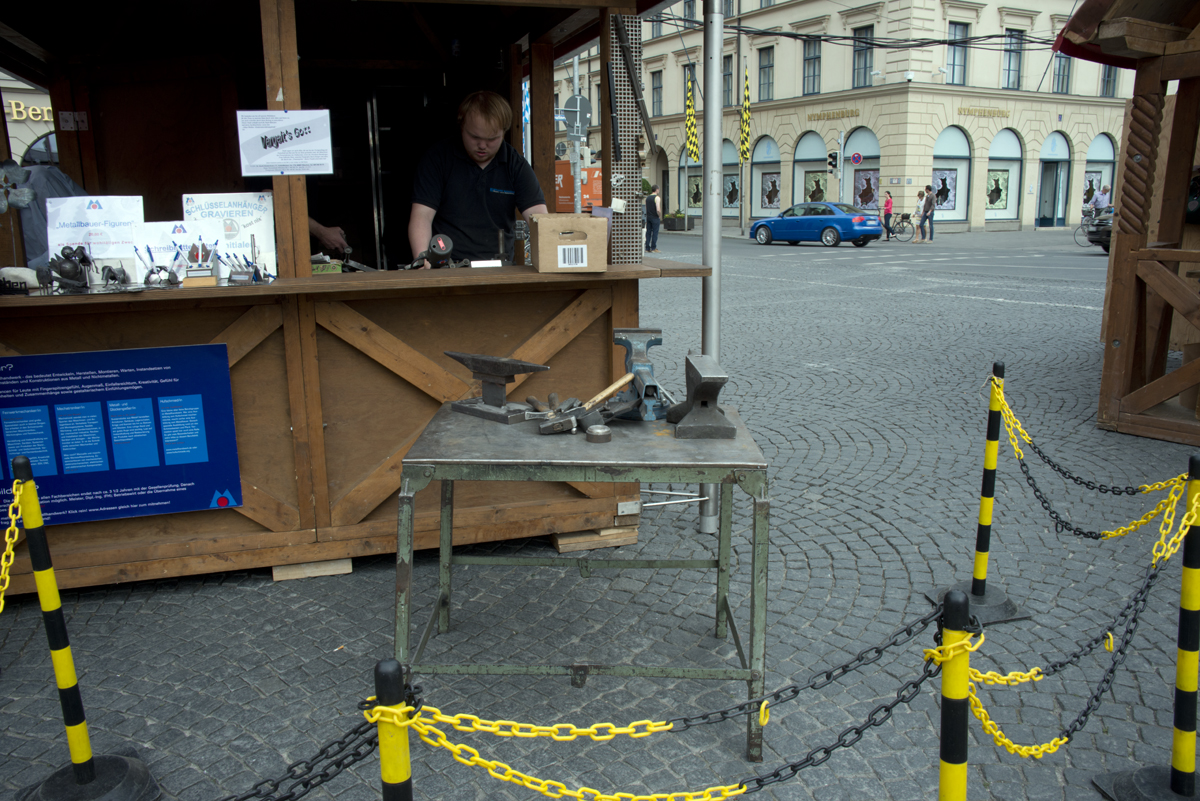 A Blasmusik (“oompah”) band was setting up on a stage in front of the Feldhernhalle (“Field Marshall Hall”). This magnificent structure was built in the 1840s by King Ludwig I (the sane one) in the style of Loggia dei Lanzi in Florence, Italy, to honor the Bavarian army. It’s seen its share of demonstrations and celebrations, including an attempted coup by Adolf Hitler in 1923. The police were not amused and Hitler was jailed for a little while as a result. He wrote Mein Kampf while incarcerated. You probably have at least a general idea of what happened after that.
It’s fun that the first song the band played was “Happy Birthday” – even if the singer’s German accent made it sound more like “Hippy Bus-day.” 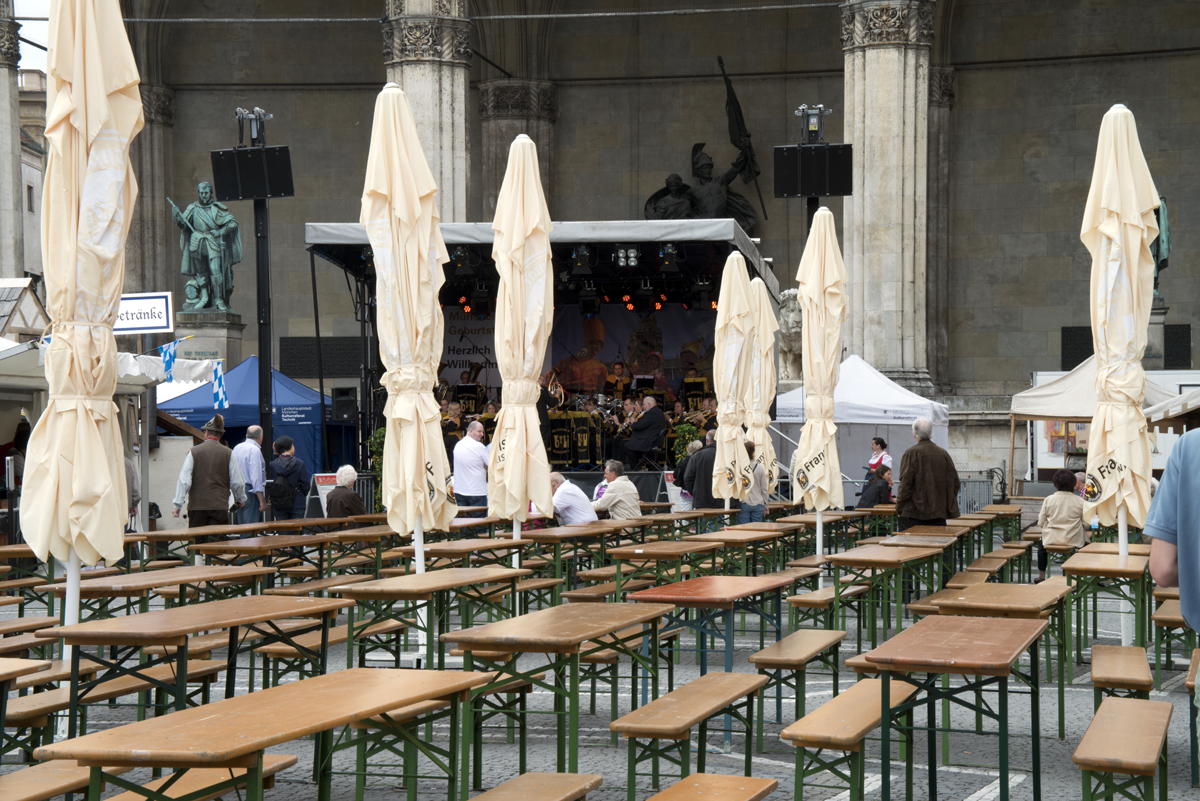 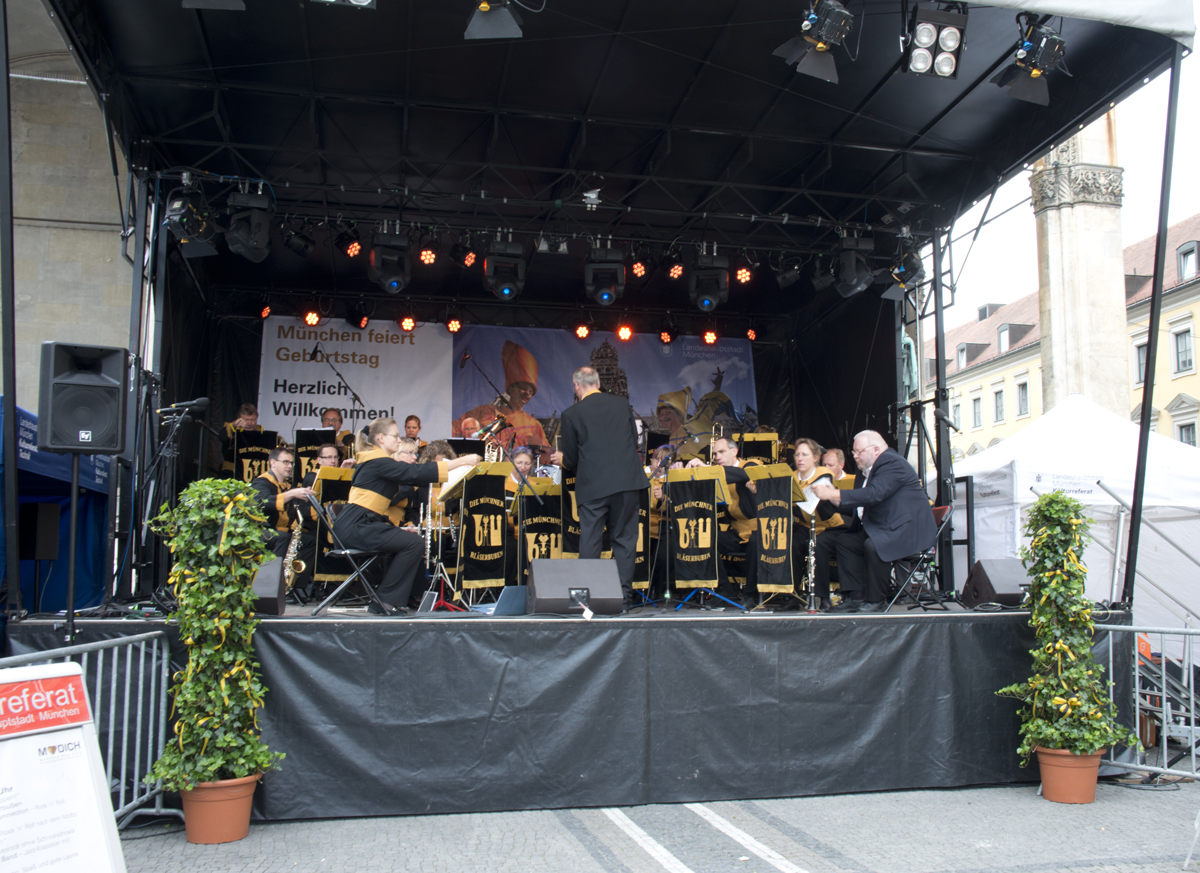 The Feldherrnhalle stands in good company. To the left as you face the hall is the Hofgarten, an Italian-style garden built by Duke Maximilian I as the court garden of the adjacent palace that served as a residence to generations of rulers since the 1300s.
To the right of the hall is the Theatinerkirche, the beautiful Theatine Church built in the late 1600s. It commemorates the long-awaited birth of an heir to the Bavarian ruling family. What a baby present! You can see the church in the background beyond the fest stall for the builders guild in the photo below. Notice the little evergreen tree atop the construction – I believe they do that in the States, too, for good fortune on the construction site. 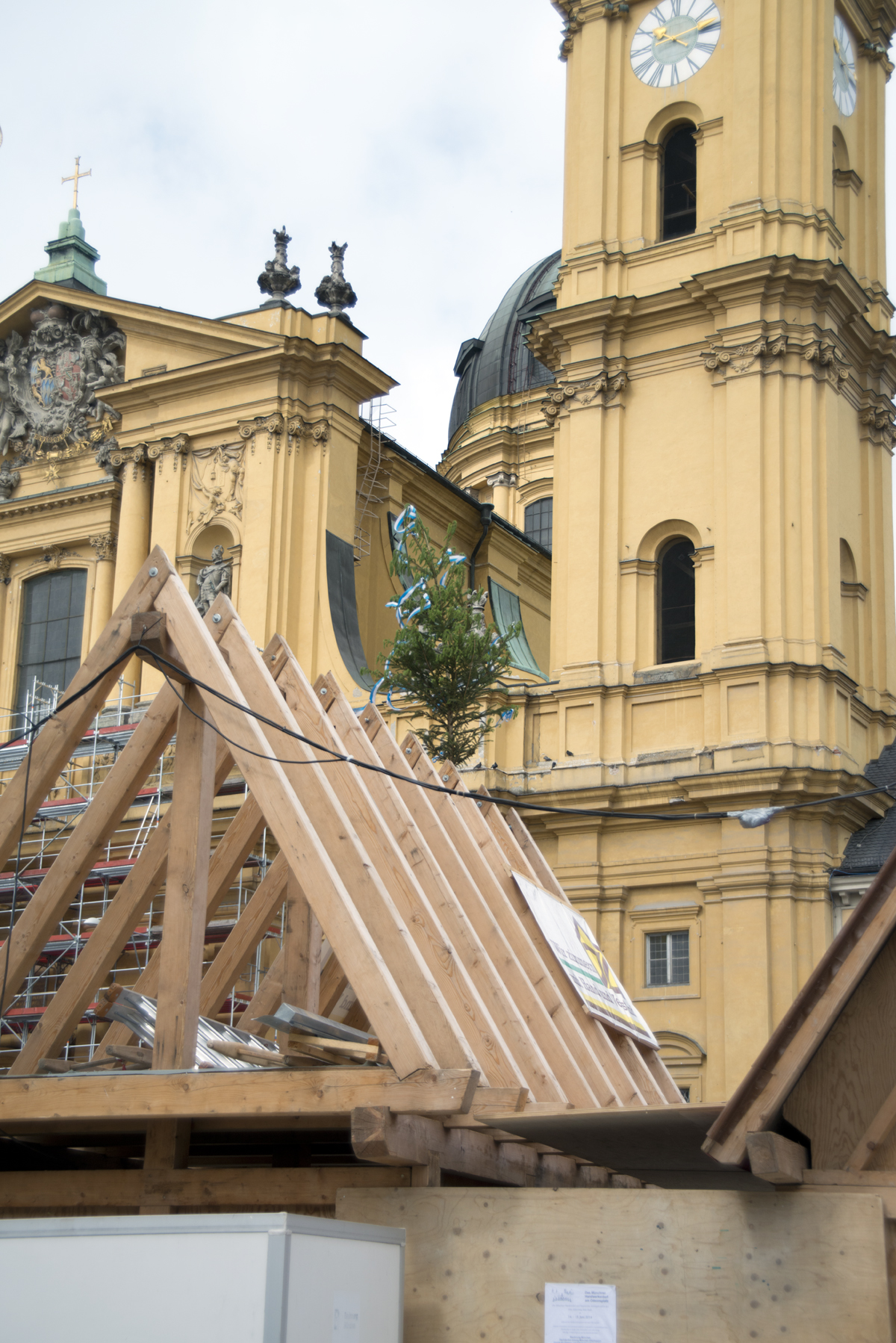 Above the oompah music I heard an accordion playing a different song. I saw this street musician on the opposite corner. I was hoping to snap a photo and be on my way, but he stared directly into the lens barrel so I kinda had to go give him some money after that. You can see yet another orchestra at the cafe in the background. 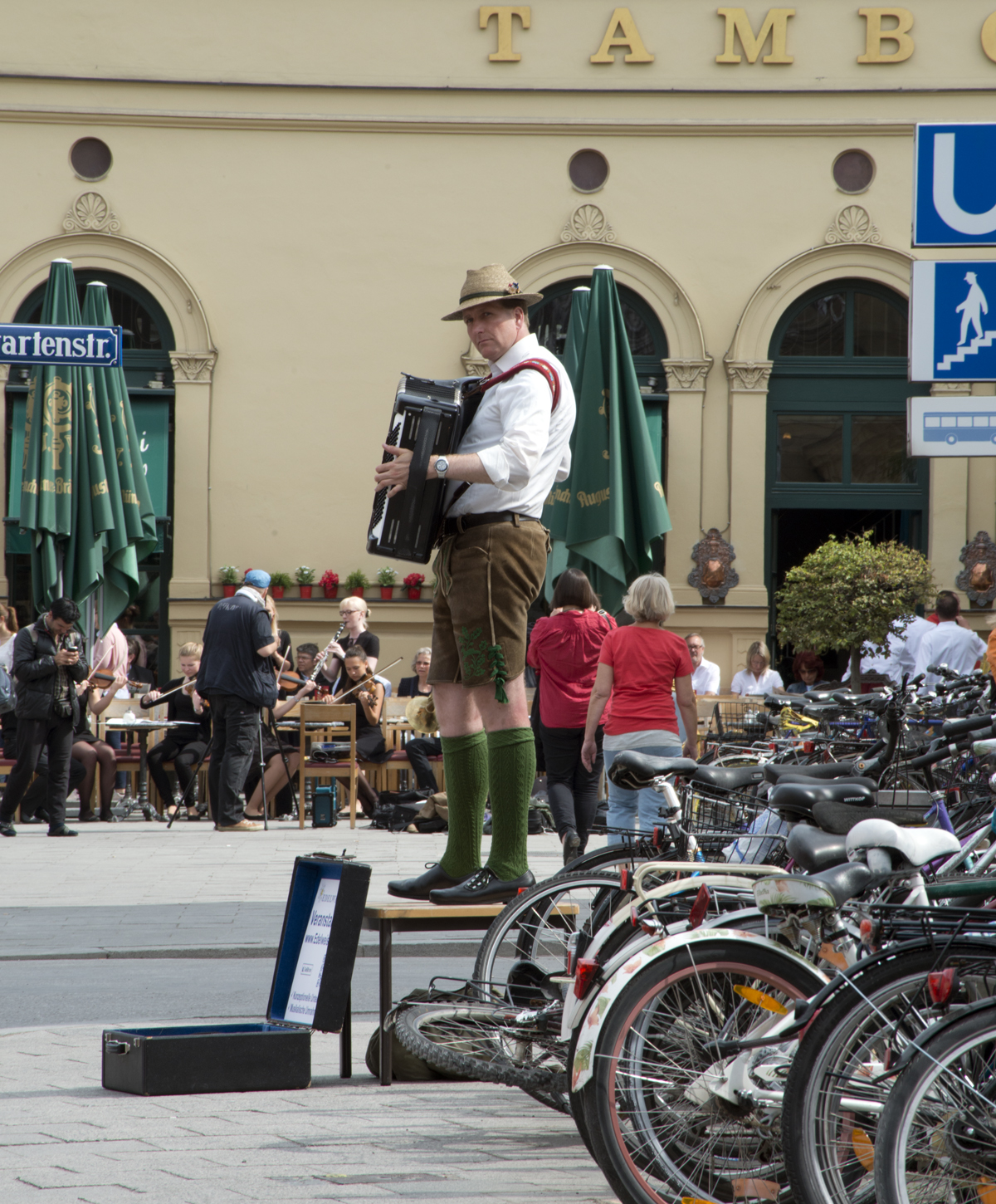 We started down Ludwigstrasse to peruse the wonderful handmade goods on display: 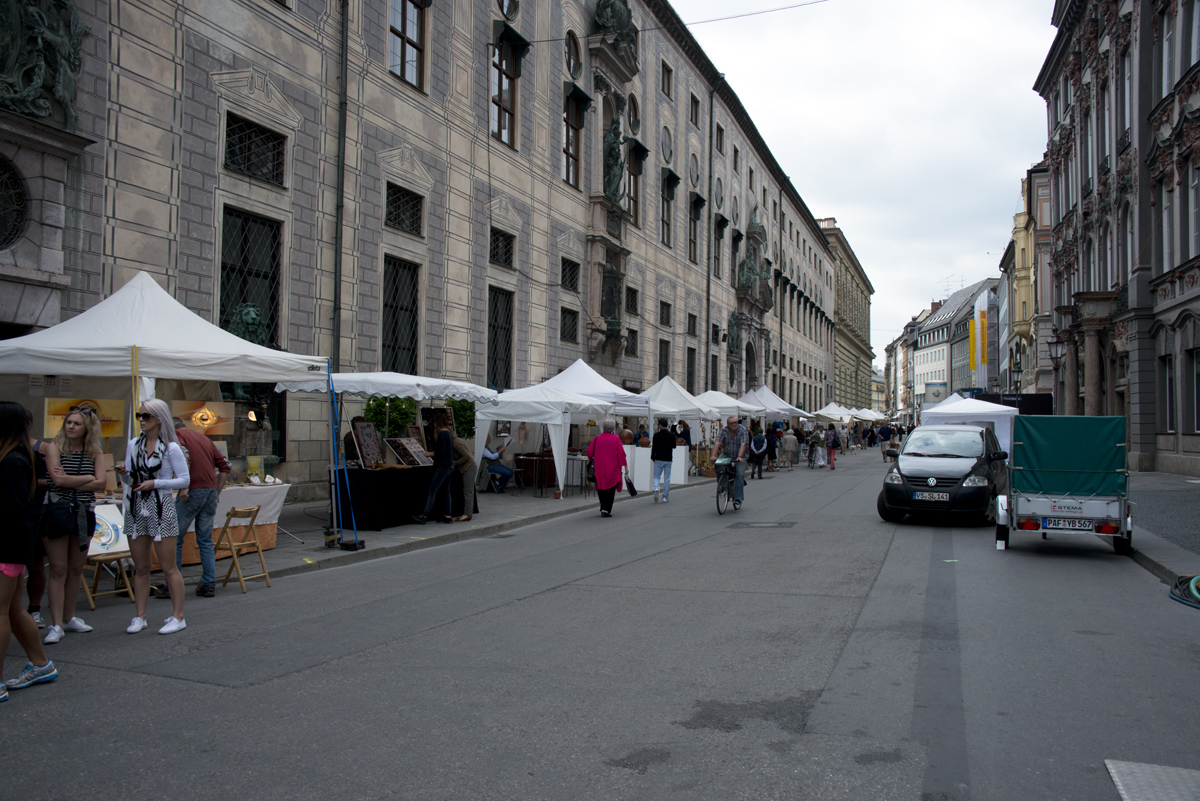 There were so many signs prohibiting photos at the booths, so I eventually gave up. Munich is famous for this. But I can report there were many, many, many beautiful, wonderful things to see!

The copper lion statues flanking the entrance to the palace I mentioned before bear copper shields. The small lion heads on the copper shields are considered good luck if you rub them, so they are very shiny. James and I made sure we accumulated some luck as we passed by: 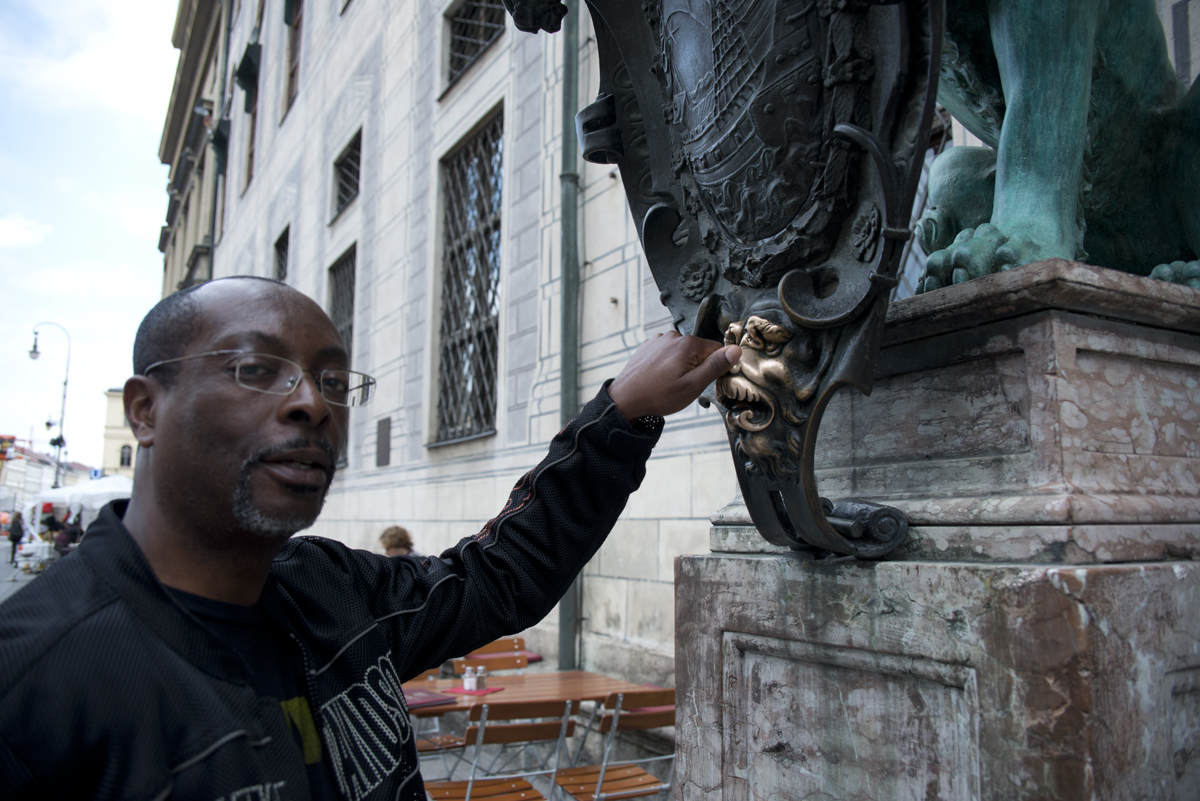 Eventually we emerged from the other end of Ludwigstrasse at Marienhof, which is one block from Marienplatz. Marienhof is now a large, grassy lot lined by benches. When I visited here a few years ago it was a massive construction site. They were expanding the subway stop under the square and found a lot of Roman artifacts. They halted construction for six months or so to give archaeologists a chance to recover the find. Then they finished the subway!
Here’s a glimpse of Marienhof – the best one I could get that day. Under that grass is the renovated subway station: 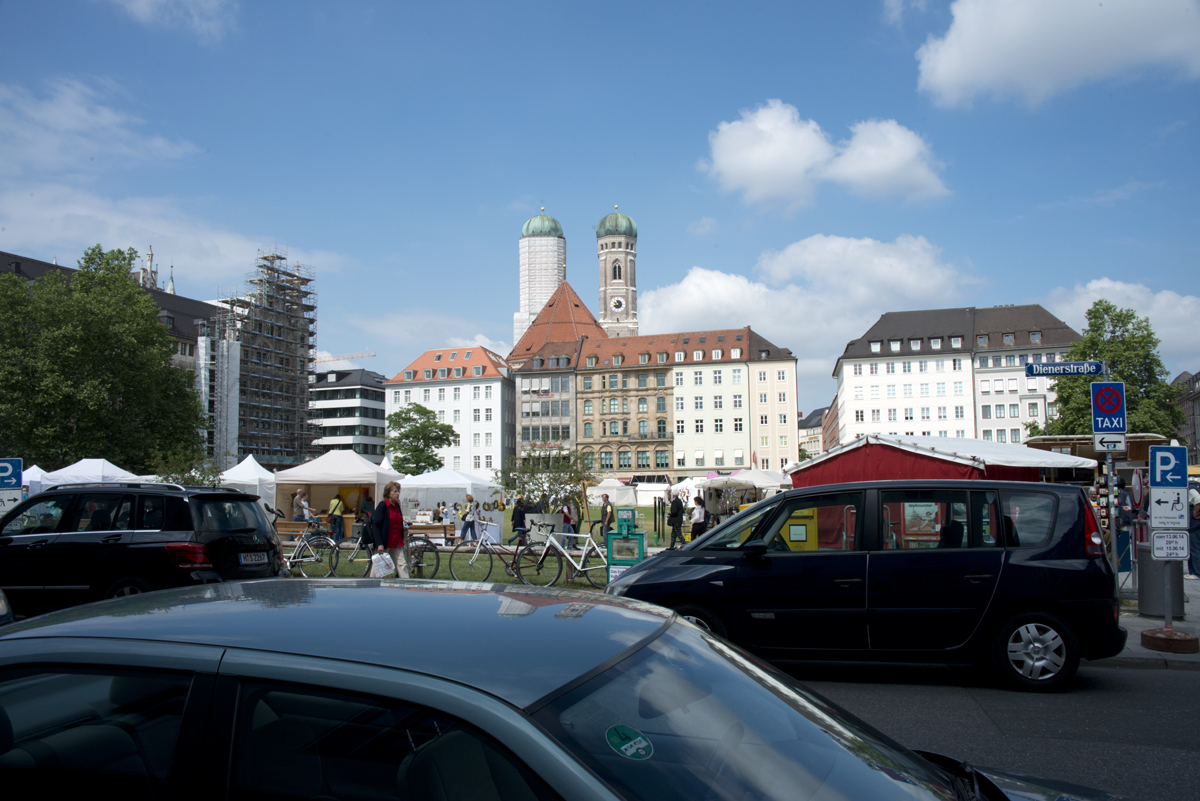 Along one side of Marienhof is the famous Dallmayr shop. It modestly calls itself a delicatessen, but it’s a huge, fantastic gourmet food shop! It was a trading company founded around 1700 and named Dallmayr in 1870 after its owner. It was sold in 1895 but it still bears Dallmayr’s name.
Dallmayr’s is famous for its coffee. After the stock market crash in 1929, the company began roasting coffee to sustain its floundering business. It worked and they have parlayed it into a mega-industry.
The store is still at the same location (yellow building here): 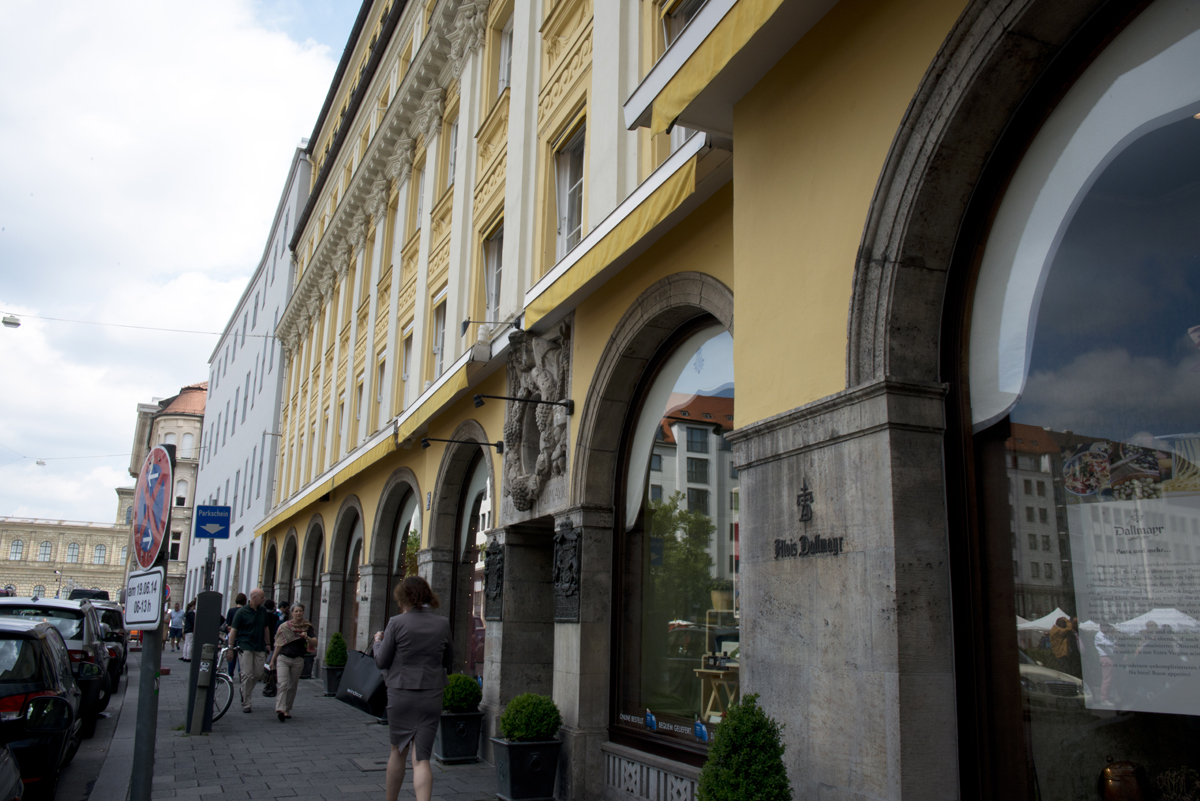 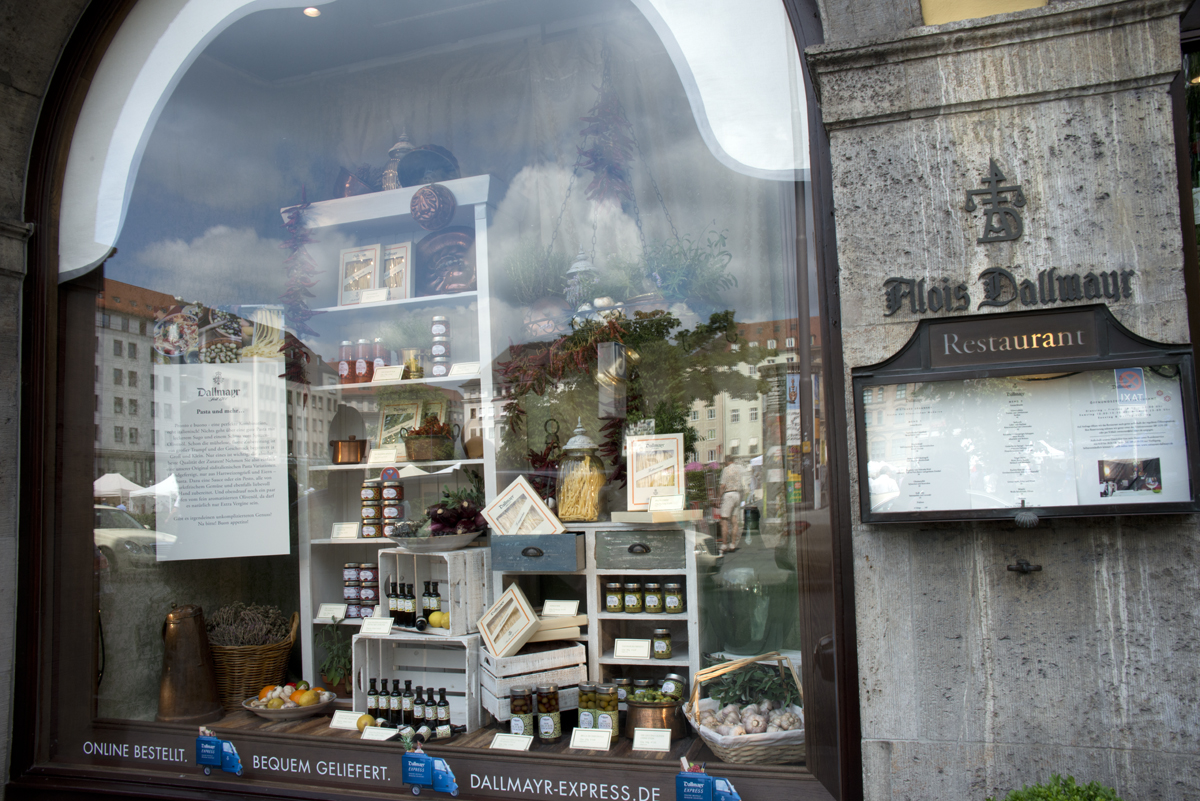 You aren’t supposed to take pictures in there, but I managed one standing in the doorway: 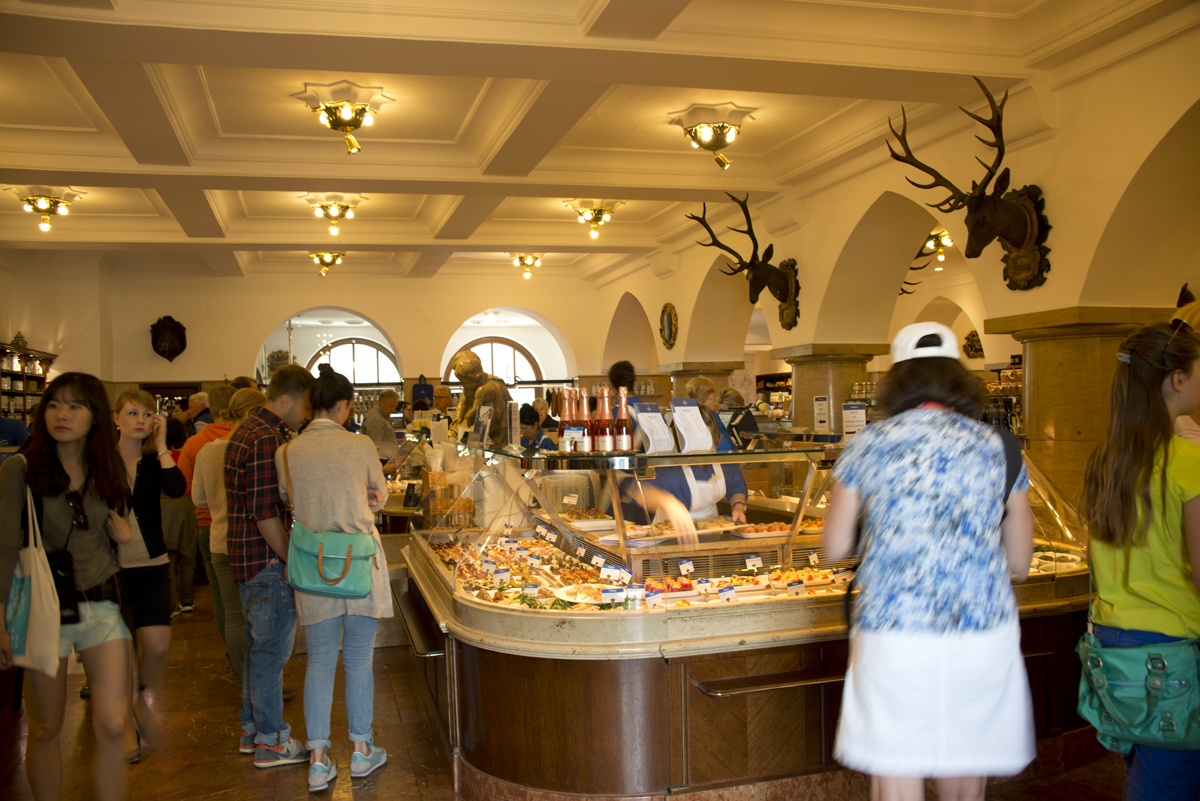 I’d been wanting to visit Dallmayr for a long time, but it was always so crowded. Today it wasn’t bad, so we went in.

Upstairs they have a fancy cafe-bistro and next door is an upscale restaurant. Above the cafe is the kitchen where they make lots of the goodies downstairs. I believe the coffee is roasted off site these days.

One thing that’s missing is a secret underground tunnel just for me to go from Dallmayr directly to Kustermann, the gourmet kitchen shop a couple of blocks away. Maybe they have stalled construction due to Roman artifacts!

We continued to Marienplatz. Along the street was a department store selling the garb: 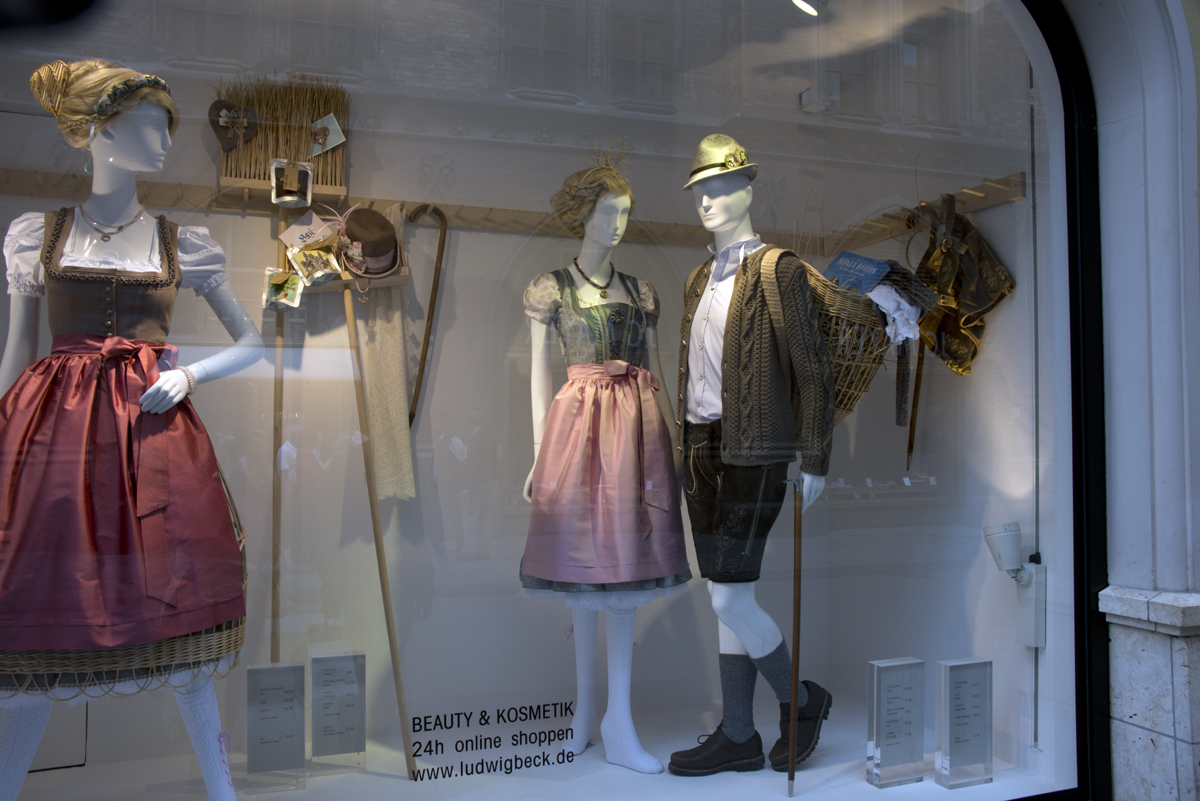 FYI, the Lederhosen on the mannequin costs 679 Euros (about $950), not including the shirt, sweater, hat, socks or shoes. Across the street is the Rolex store – just across from the Prada shop! 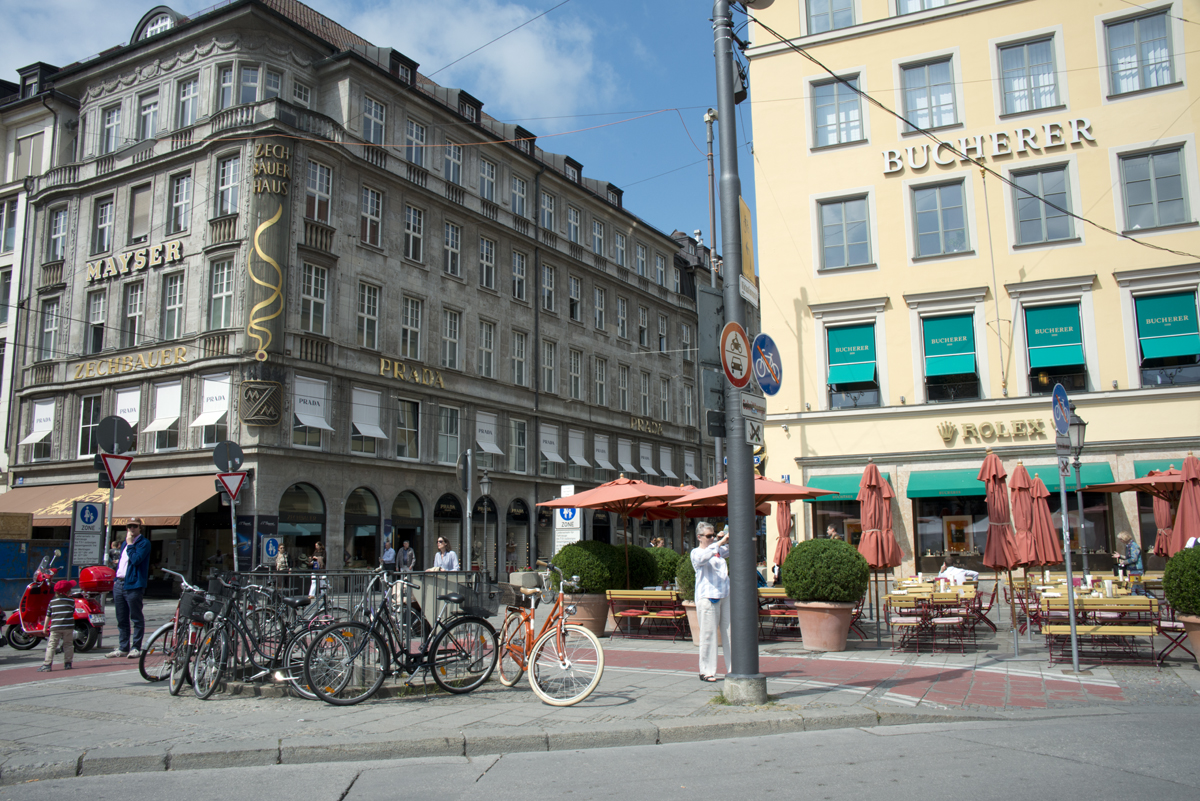 By the time we got to Marienplatz it was getting really crowded. There was a stage set up next to the Glockenspiel and stilted young ladies in costumery were blowing bubbles and dancing to the music being played.

Next a group of dancers took the stage as we were making our way through the crowd to the next subway station: 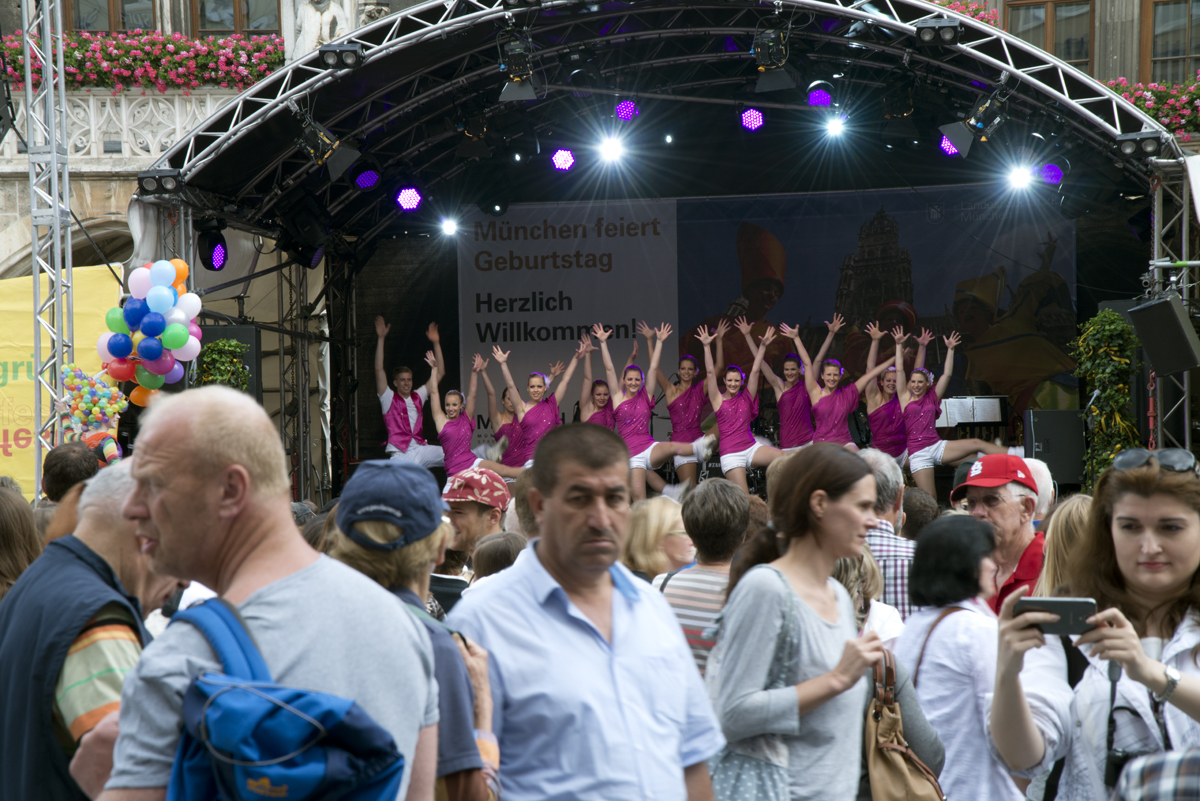 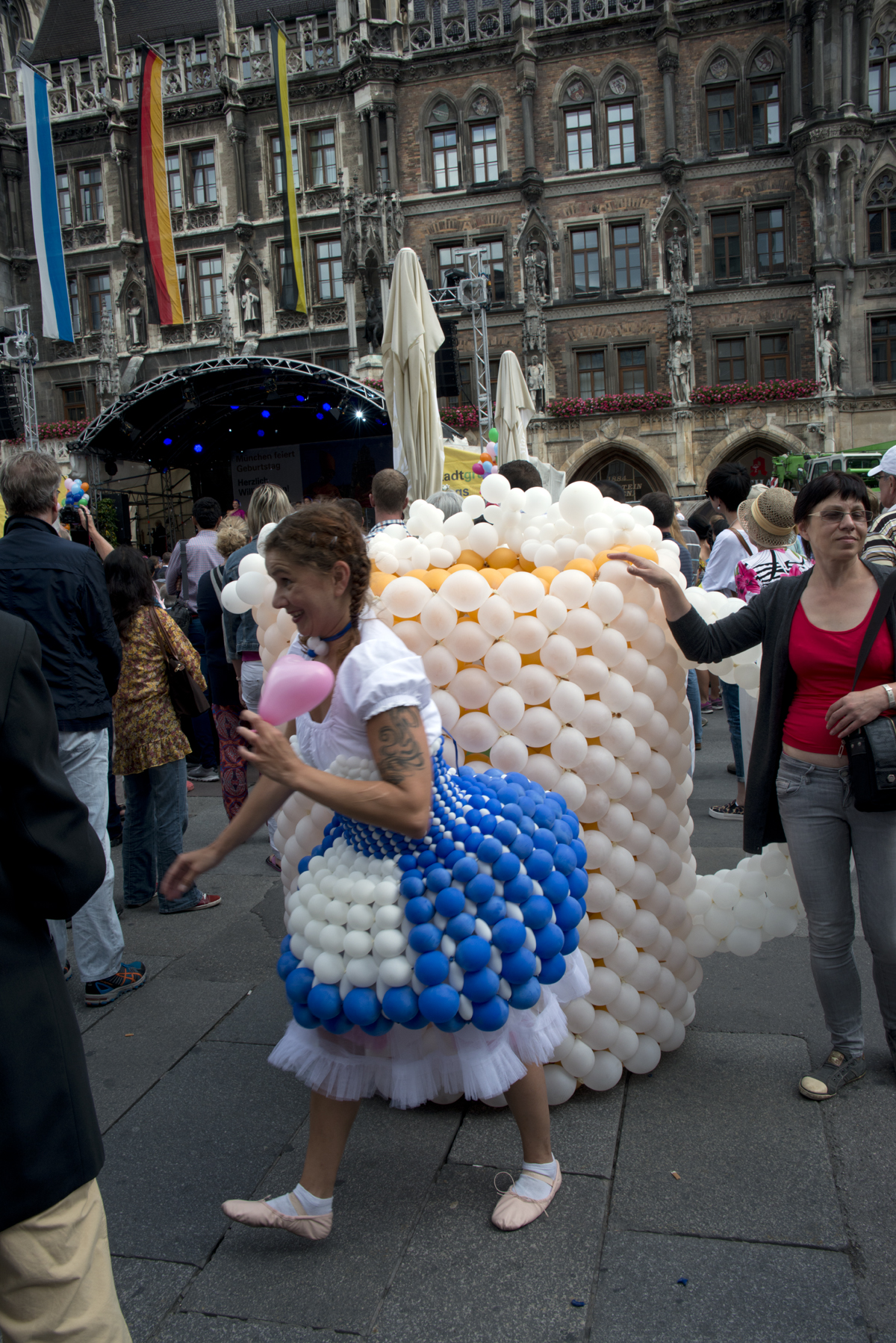 After we left the center of town we took the train to the main station and then walked a few blocks to the Augustiner Keller Biergarten. But that’s another blog post. You’ll just have to wait to see the pictures of the yummy food we had there to restore ourselves! 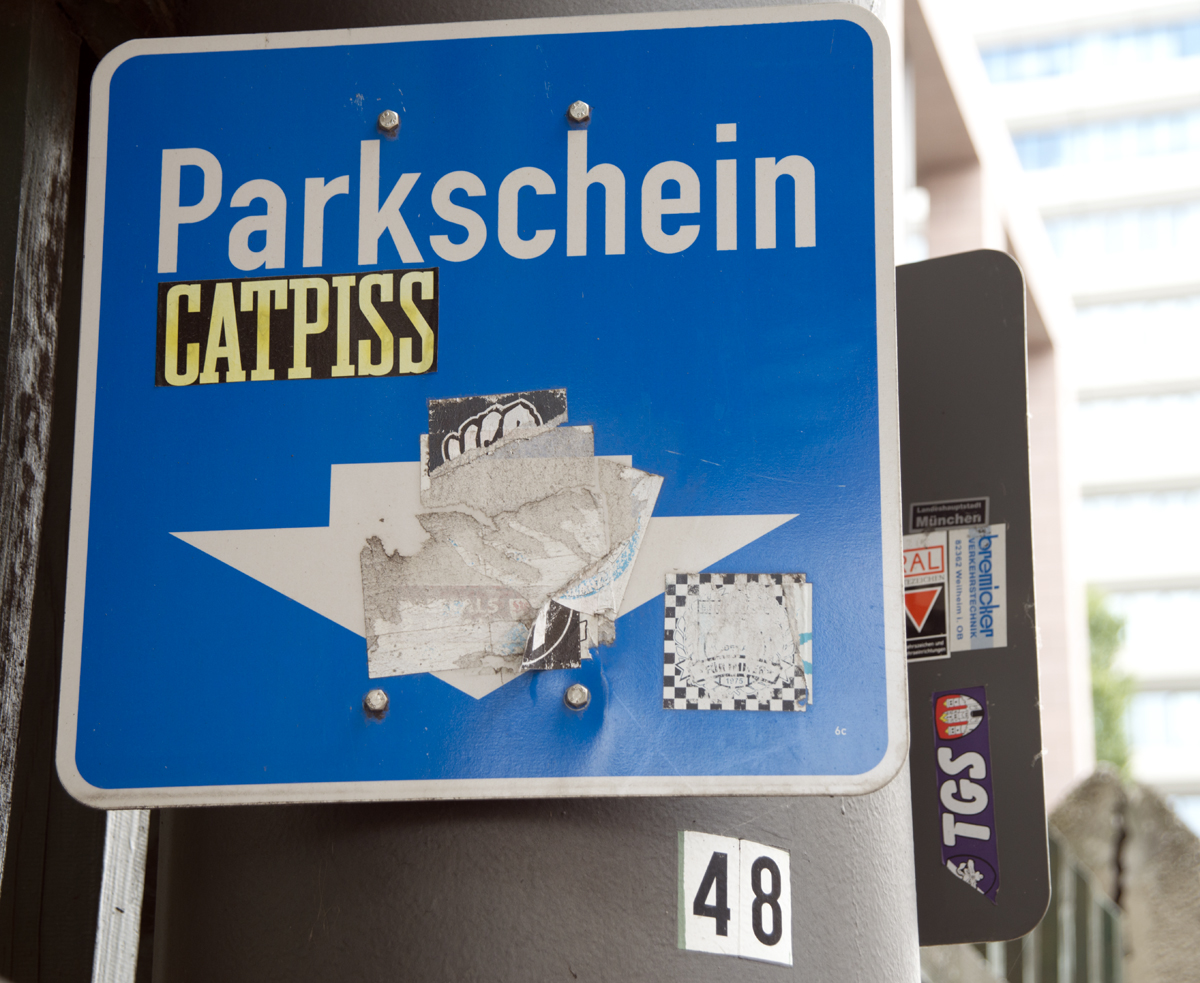 2 thoughts on “Happy 856th Birthday, Munich! And the Dallmayr store!”