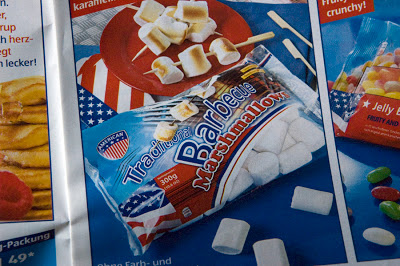 I’m (sort of) taking the July 4 holiday off, so here is something interesting from 2010. It starts out with Halloween in Germany, but hang in there. There’s more about July 4th in Germany. And, no, they don’t celebrate the US independence day or anything else on July 4 in Germany.

Happy Halloween!
Halloween is one of my favorite holidays. However, it is not widely celebrated here in Europe. Especially not like it is in my neighborhood in Florida. In our subdivision, even the houses are in costume, the adults handing out treats are in costume and droves and droves of children also in costume roam the streets grubbing candy. Even the parents come along in costume and many families dress up their dogs and bring them, too. It’s such a fantastic block party! Therefore, it’s also one of the hardest days for me to be here in Europe because I enjoy the American festivities so much.
Here in Germany there are jack-o-lanterns here and there and stores have maybe an endcap display with smiling ghosts or pumpkins, but nothing like the Walmart response to this holiday.
I must say that Hilde’s tenant, about 30 years old, told me yesterday that she is going to a costume party, so the tradition is creeping in gradually. Interestingly, the hosts of the costume party have specified that each person must dress up and that the costume must be a character from either a Johnny Depp movie or a Tim Burton movie. Great idea, right? She said she would simply be a pirate of the Caribbean and the host quickly cut her off, saying, “Anything but a pirate!”
Also, I did see a couple of pumpkin faces yesterday on some fenceposts near here. They were kind of melty, having been obviously sitting in the sunny weather for a few too many days, looking like old, toothless men.
While I don’t have any lengthy Halloween stories or pictures, it reminded me of the local supermarket flyer I picked up shortly before last Fourth of July. The store name is Aldi, and they also have locations in the States. It’s not a big store and they have a very limited offering such as coffee, bread, cheese, t.p., shampoo and basics. But they have a quickly-changing middle aisle with interesting goodies depending on the time of year or upcoming holiday.
I found the late-June offerings so delightful because they were offering “American” food. The flyer never mentioned the Fourth of July, but it certainly looked like a July 4th flyer from any American supermarket, except, of course, it was in German.
I have been surprised over the years that foods considered uniquely American include peanut butter, ketchup, popcorn, hotdogs and, of course, hamburgers. This year I added marshmallows to the list!
I kept the Aldi flyer and photographed it for you. My favorite ad was for the marshmallows:

Notice it says “Barbecue Marshmallows.” I deduced they meant the marshmallows were for toasting over a fire, but the image that came to mind for me was barbecue sauce on a marshmallow!
The flyer is filled with a lot of near-misses, such as ketchup-and-mustard or ketchup-and-mayo in tubes to squirt on hamburgers or hot dogs. Ew. 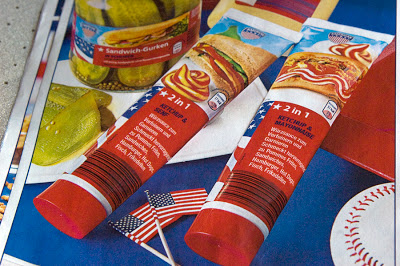 Here is the flyer in its entirety. The headline reads, “America invites you!” 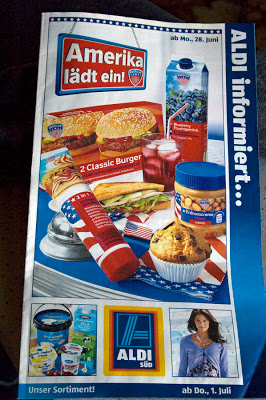 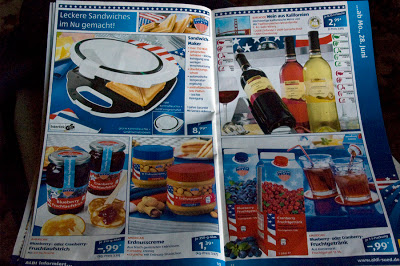 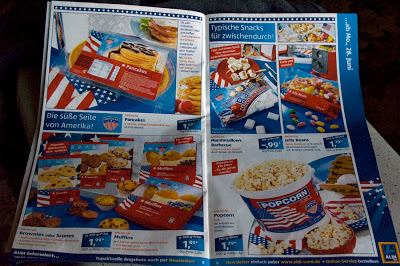 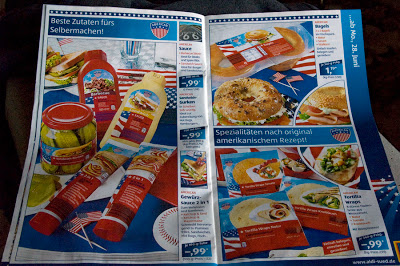 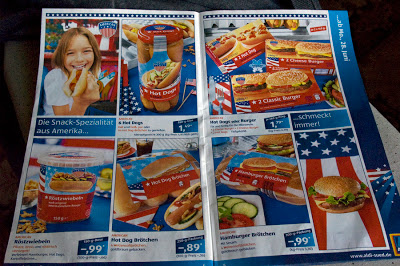 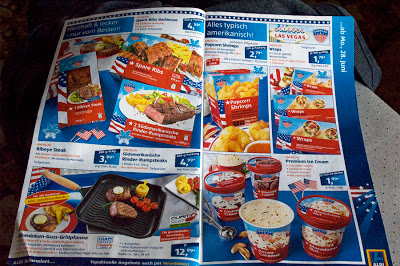 Lastly, I found some popcorn recently at a different supermarket. Found it in the “International” aisle, what we might call in the States the “Ethnic” aisle. This ethnic aisle has snails from France and balsamic vinegar from Italy. The International aisle also has Tabasco and a couple of other real American products. 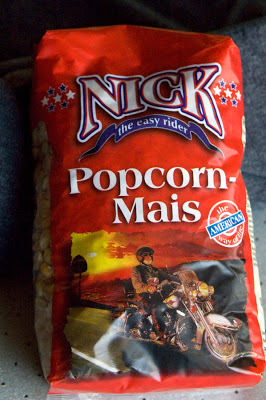 Anyway, when was the last time you connected popcorn to a biker riding a chopper?
Finally, here’s your Photo for No Apparent Reason: 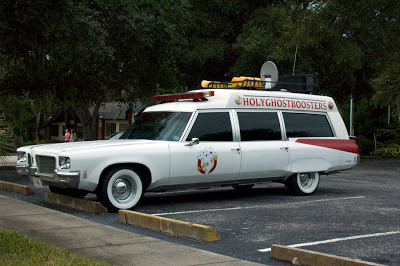