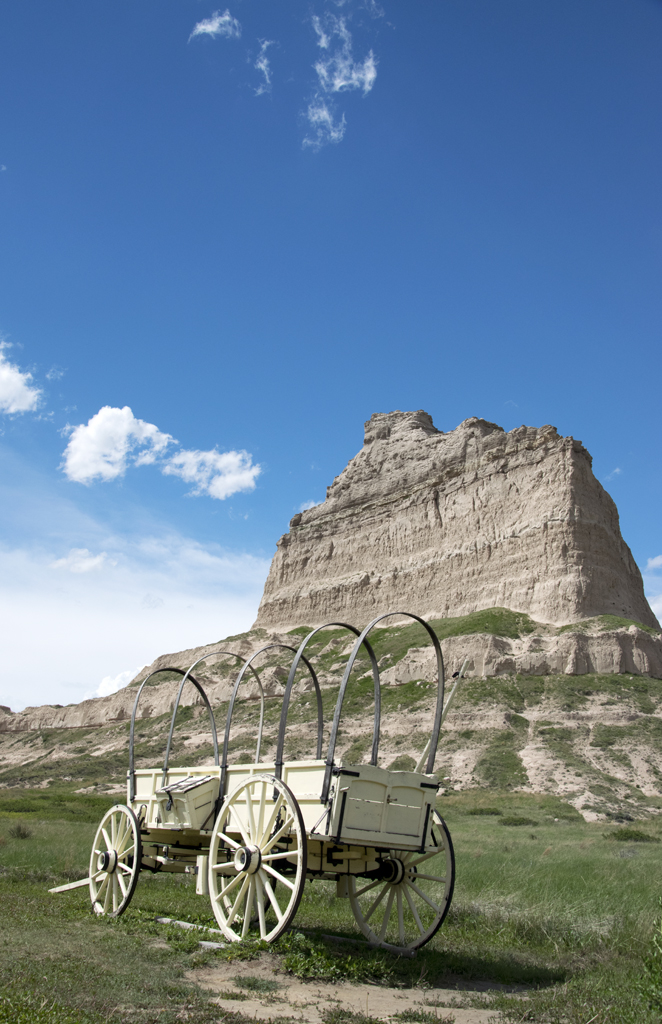 Last year I explored an original Pony Express station in Gothenburg, Nebraska. In that post, I mentioned that I planned to see the annual re-ride this year. Well, I did it! It’s one of the coolest things I ever experienced! However, I would compare it to my trip to see the total eclipse, in that I spent hours and hours driving/waiting for a two-minute event, then driving all the way back home. Both events: totally worth it!

This time I drove three hours from Denver to Scotts Bluff in western Nebraska. I had originally planned to go to Julesburg, Colorado, which is closer, but the ponies were scheduled to be there at some wee hour, which didn’t appeal. No light means terrible photos! The rider was supposed to arrive in Scotts Bluff around 4pm.

So I drove up the day before and had a hotel room in Gering, which is next to Scotts Bluff, which two together still make a pretty small town. I will give kudos to the Steel Grill, a steakhouse in Gering. Although it’s no-frills and had the requisite seedy characters at the bar, they certainly do steak right, says the Midwest girl who ought to know! In fact, the ceiling fans were actually reels from a combine – that part on the front that rotates around and gathers the wheat toward the cutter. Points for that.

Back to the Pony Express: I’d gathered info from the National Pony Express Association (NPEA) website that there would be a rider change at the Scotts Bluff National Monument. The monument is that 800-foot cliff you see here:

They are good enough to have installed pioneer wagons, one with plastic oxen, for photo opps: 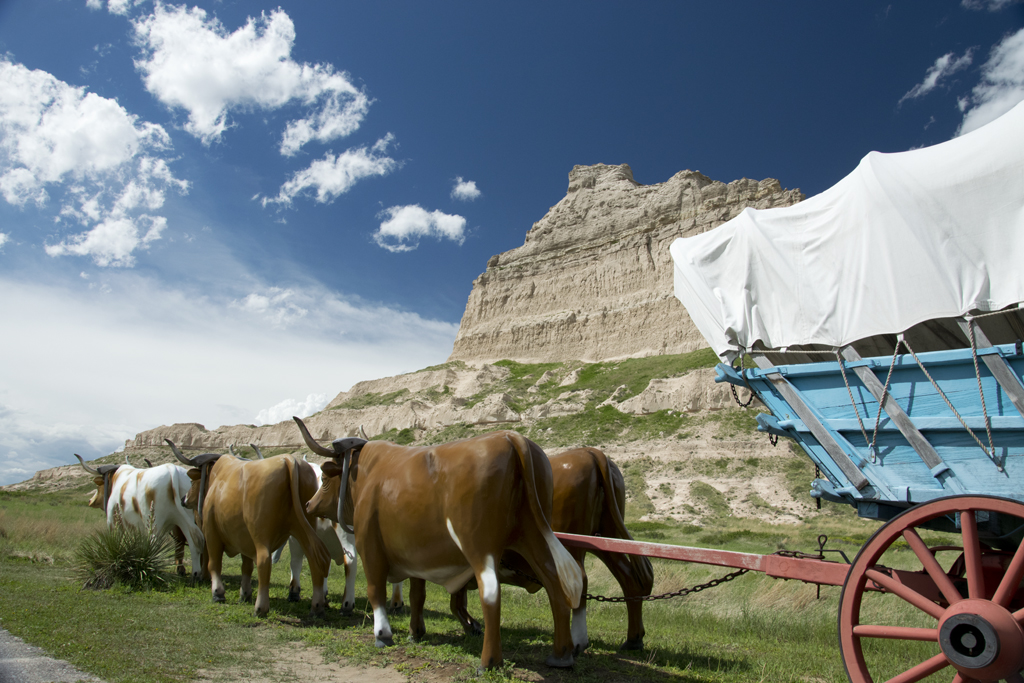 The National Park employees and the Pony Express Association people scheduled a presentation at 2pm that day with some history and a Q&A session about the original PE and the re-rides. So I arrived around 1pm and met the most wonderful National Park employee (ranger?) who was even more excited about the whole affair than I was! She kept everyone informed, though the collaboration between the organizations is very informal. The first thing she told me was that the riders were running about three hours late!

At 2pm, a fellow named Lyle Groenwald began the program. You can see here that we were outdoors under a shady evergreen, which was great because it was HOT! 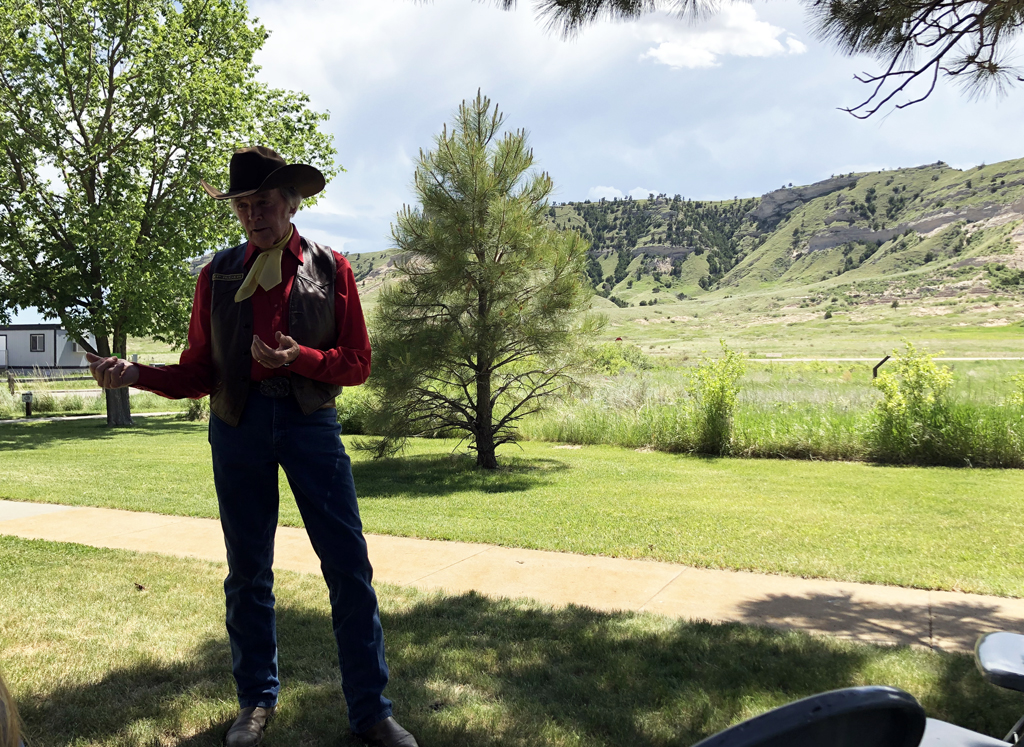 Lyle is the Nebraska chapter president of the NPEA. A swarthy-looking cowboy he was, too! 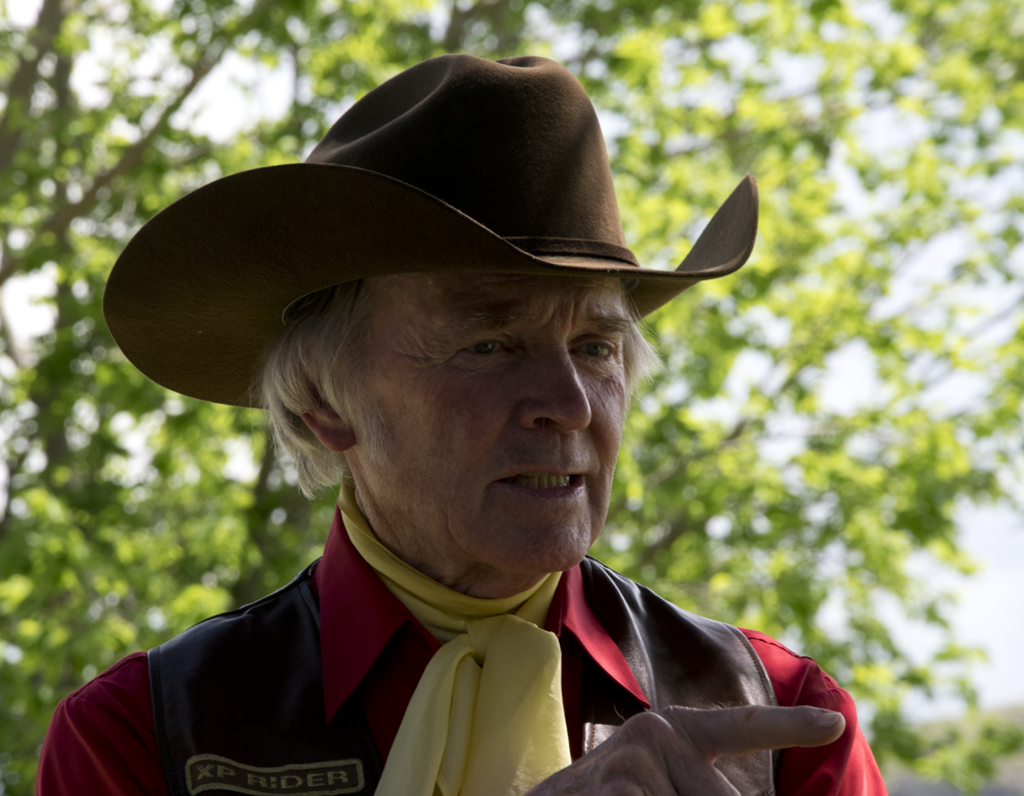 He was wearing a “Pony Express uniform” of a red shirt, yellow neck scarf and dark vest. This is the uniform because a written account of the first PE rider in 1860 records that he was wearing such an outfit. Lyle, however, went above and beyond. He was even wearing a PE belt buckle! 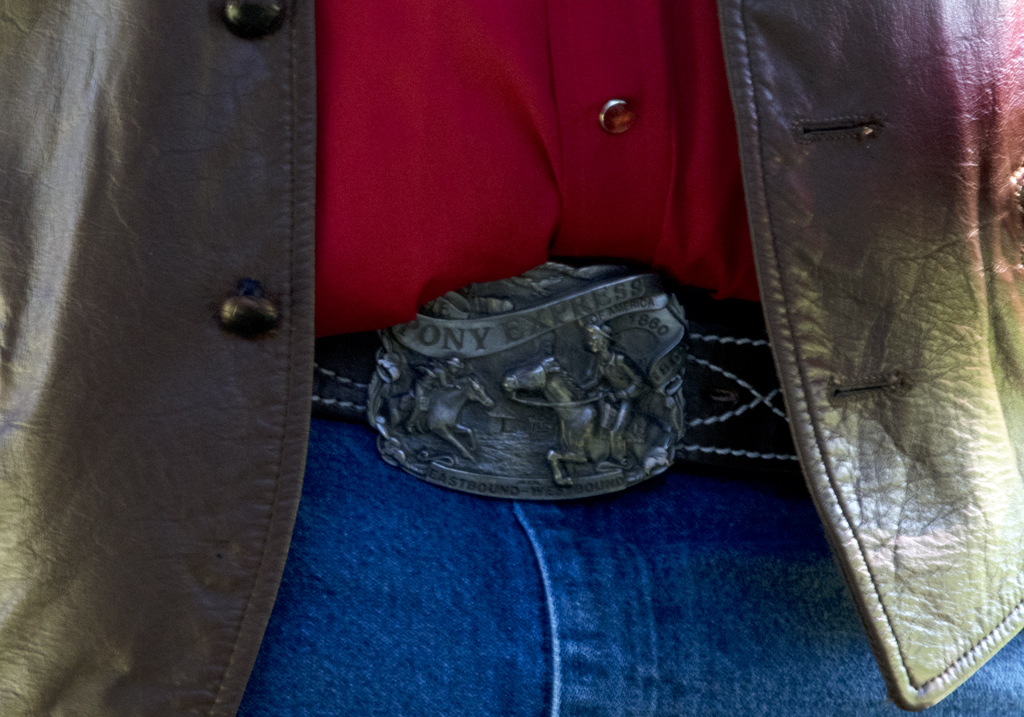 One of the first things he told us was that the rider was so late because one of the horses threw its rider early that morning. No one was hurt, but it took some time to capture the runaway horse and retrieve the mail.

As I understand it, each state’s chapter – the ponies run through eight states – is in charge of enlisting volunteer riders who must supply their own horses. It’s up to the chapter to figure out how to accomplish the route in the time allotted. The riders spend three days traversing Nebraska.

The entire ride lasts only 10 days, from St. Joseph, Missouri, to Sacramento, California, a total of 1,966 miles. This timeframe is because the original PE’s schedule was 10 days. This year the ride started in St. Joseph and went west, but in alternate years it starts in Sacramento and goes east.

More tidbits he told us: 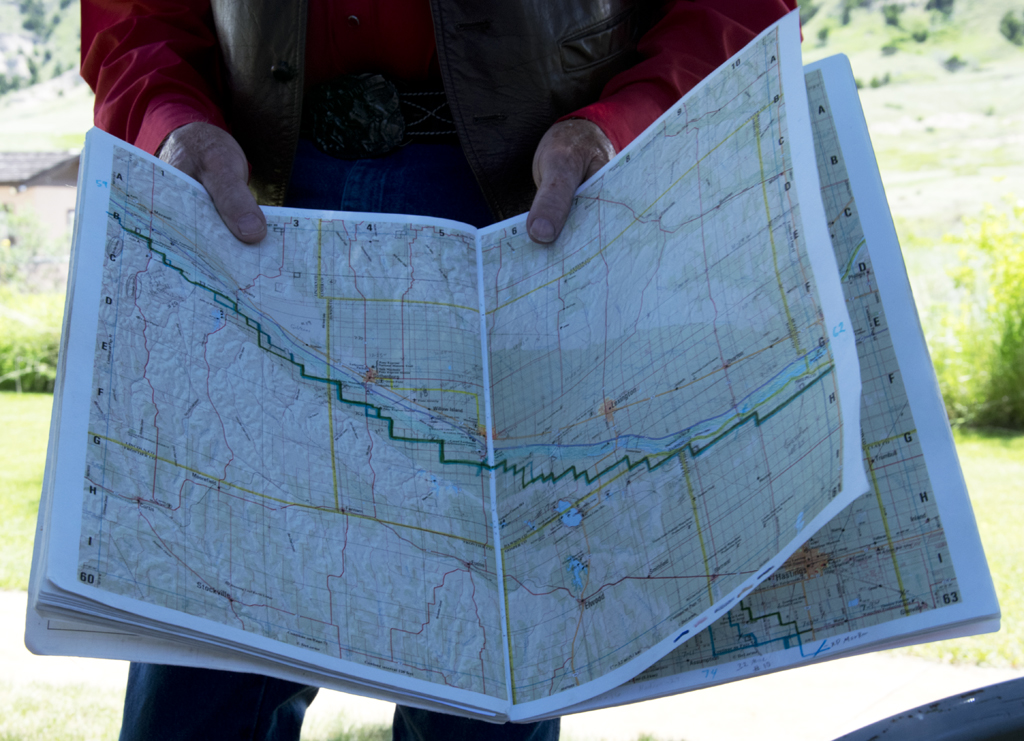 Presently, a guy named Dean Atkin out of Utah arrived. He is the national president of the association. 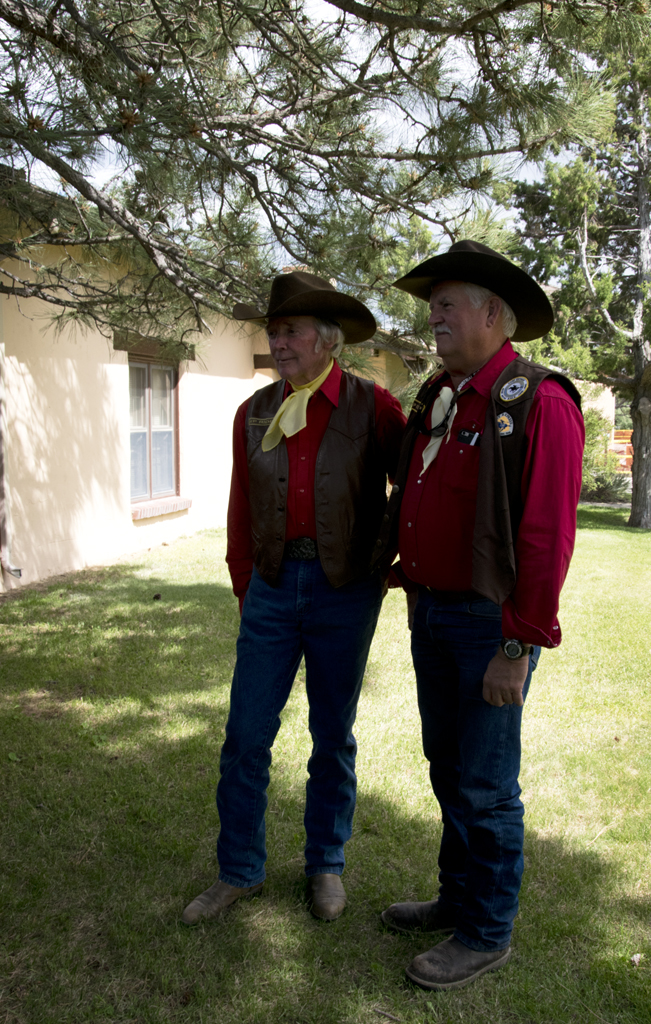 I was so happy to meet these guys and thank them for doing this monumental labor of love! I’m pretty sure they don’t remember me, though, because they had both been up for about 48 hours, driving with the entourage that was accompanying the riders. Fortunately, Lyle’s wife was on hand to do the driving and she seemed much more rested than her husband!

After the program, they were still estimating the rider to arrive around 6pm. There was even a webpage where you could track the mail because of a GPS device in the mochilla, which is the leather saddle cover/saddle bag where they carried the mail. But by my calculations, I didn’t expect the rider before 7pm. So I had to settle in and figure out what to do for the next three hours or so.

There was a Legacy of the Plains Museum just down the road, which I checked out. It was totally worth the visit, though the $10 entry fee seemed a bit steep. I drove the five minutes to Scotts Bluff a few times to fill up the gas tank and get something to eat. Mostly I sat in the car reading on my Kindle app.

About 5pm, storm clouds moved in and a very windy lightning storm ensued! I wondered what this meant for the riders – hint: it meant another delay but no real problems. I also wondered what it meant for my photos. Bu you’ll have to wait for the answer, though, because I’ll post my second half of this story next week! 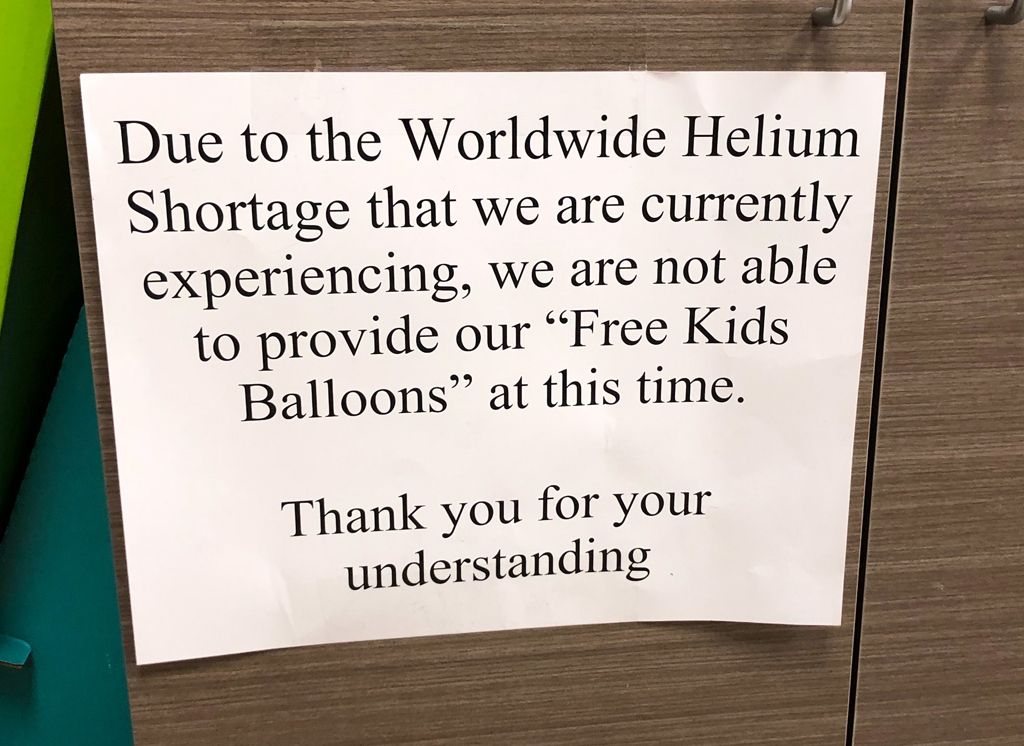