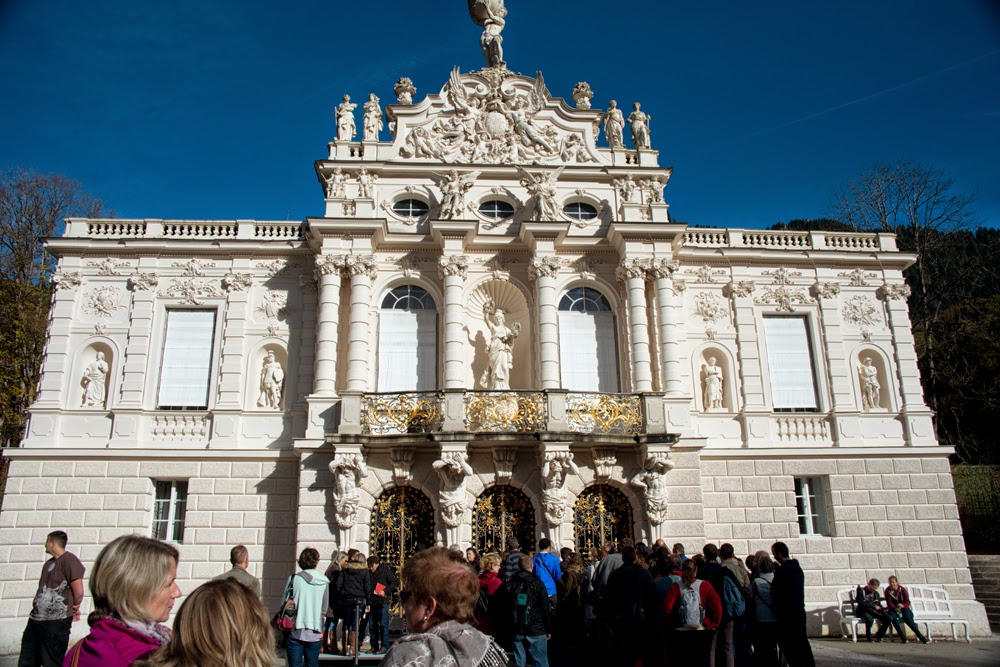 For some easy, no-cook (and cook, too!) recipes, buy my AppSnax recipe book.

It makes a great addition to your entertaining recipe stash

and a wonderful gift for the cook on your holiday shopping list (it’s not too early!)

Last weekend my husband and I made a bus trip to two of King Ludwig II’s palaces: Neuschwanstein and Linderhof. I’d visited Neuschwanstein eons ago but never had the chance to go inside, which is only accessible via guided tour. It was a bucket list item for me to finally see the inside of this beautiful place. Linderhof I’d never really heard of and I signed up because it was part of the Neuschwanstein deal. But, oh, was it grand!
We left Munich by Grayline bus about 8:30 on a fantastically beautiful Sunday morning. Turns out it was one of the last beautiful, warm days before the cold and rain set in later this week (read, “today”). The palaces are normally within two hours by car from Munich, but this day it took a little longer due to a traffic jam on the Autobahn. Seems the railroad strike and the weather caused people to take to the roads via car for a perfect storm of traffic.
It was not a real issue because the vistas were stunning. Here is the kind of view from the bus window (excuse the reflections): 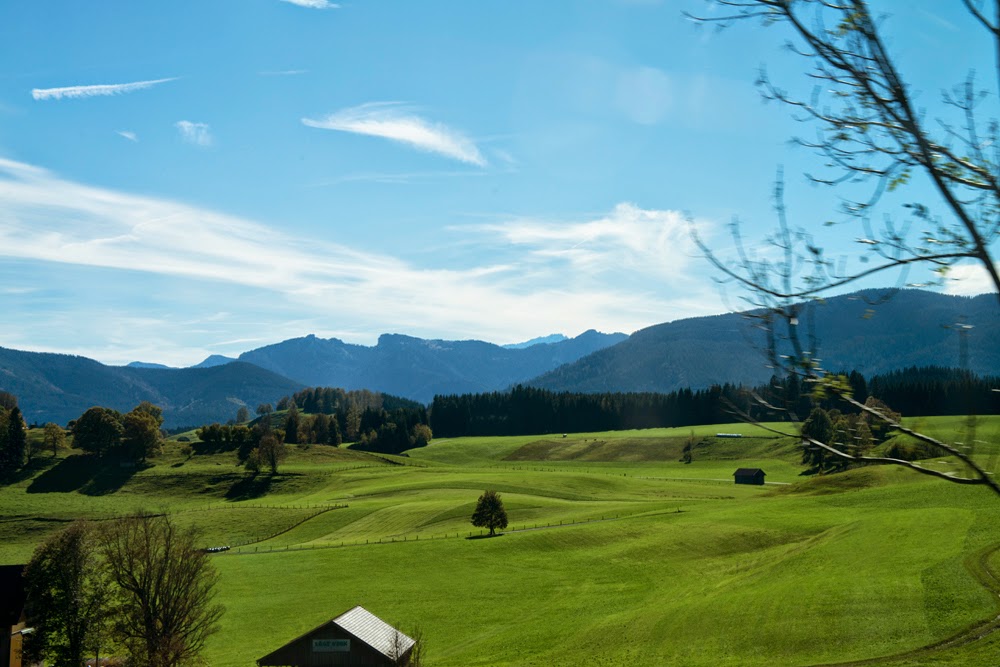 Almost reminded me of Tuscany… 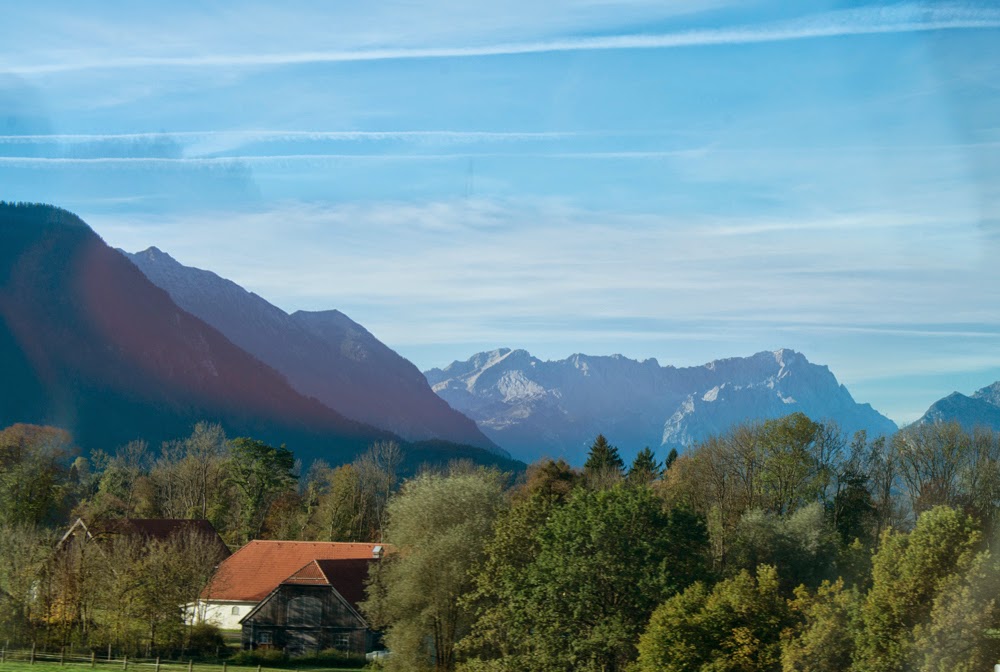 Just the other day I wondered aloud to my husband where they keep the cows in Bavaria. Most of the dairy products in the supermarket say “Bavarian” but I haven’t seen many cows around here or up in Bamberg where I lived before. I discovered where all the cows are on Sunday: 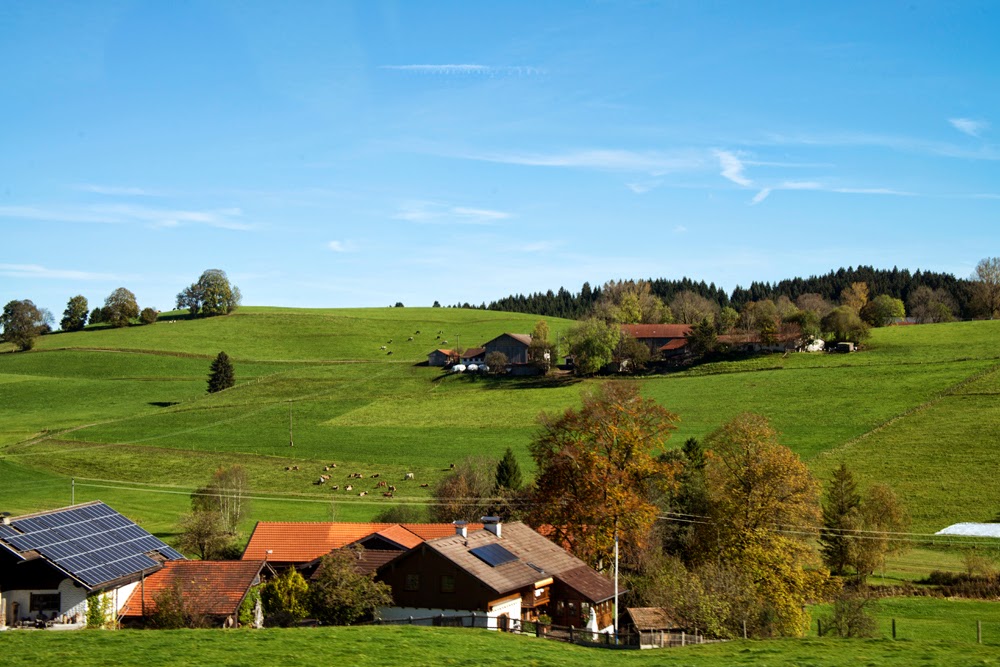 They graze the cows in the mountain meadows because the grass that grows there makes the milk sweet. If you look closely, you can see that the cows actually wear those big, clunky cowbells! 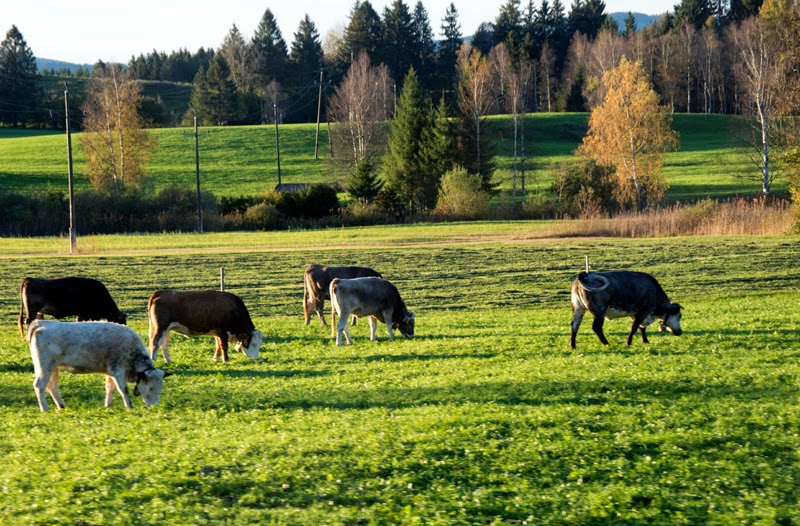 A little about “mad” King Ludwig II. He was the son of King Maximilian II of Bavaria. He was born in 1845 in Munich’s Nymphenburg palace where the royal family lived. He took the throne at the age of 18. I’ll spare you the complicated politics, but only two years later Bavaria became part of Prussia, and subsequently part of the German Empire.

Ludwig II (ungainly full name: Ludwig Otto Friedrich Wilhelm) cared nothing for affairs of state and instead concentrated on building two palaces and a castle because he hated Munich where the existing palaces were. He devoted pretty much all of the royal money (not state revenue, though) to grand artistic endeavors such as sponsoring the composer Richard Wagner.

Ludwig II was very introverted to the point of being reclusive. I’m personally very glad he preferred to spend time alone and was so into the arts because of the legacy of the architecture and artwork he left behind. I only hope he found happiness when he was alive. The Bavarians certainly think fondly of him now.

Anyway, Linderhof is one of the palaces that he built. It was his favorite place and he spent ten days a month there by himself. Well, in addition to a huge staff of servants!

Finally we arrived at Linderhof. I must tell you that, though the bus dropped us off as close as you can get to the palace in a vehicle, it was still quite a haul uphill to the building. And that was only the beginning of the stamina we’d have to have! Ya gotta be fit to tour these palaces.

The facade of Linderhof is absolutely breathtaking! By comparison, Linderhof is a small castle, with only ten rooms, not counting the servants’ quarters. And the rooms are comparatively small by royal standards. It’s based on King Louis XIV of France’s palace at Versailles.

The sculptures on the pillars looked like the sun was getting in their eyes: 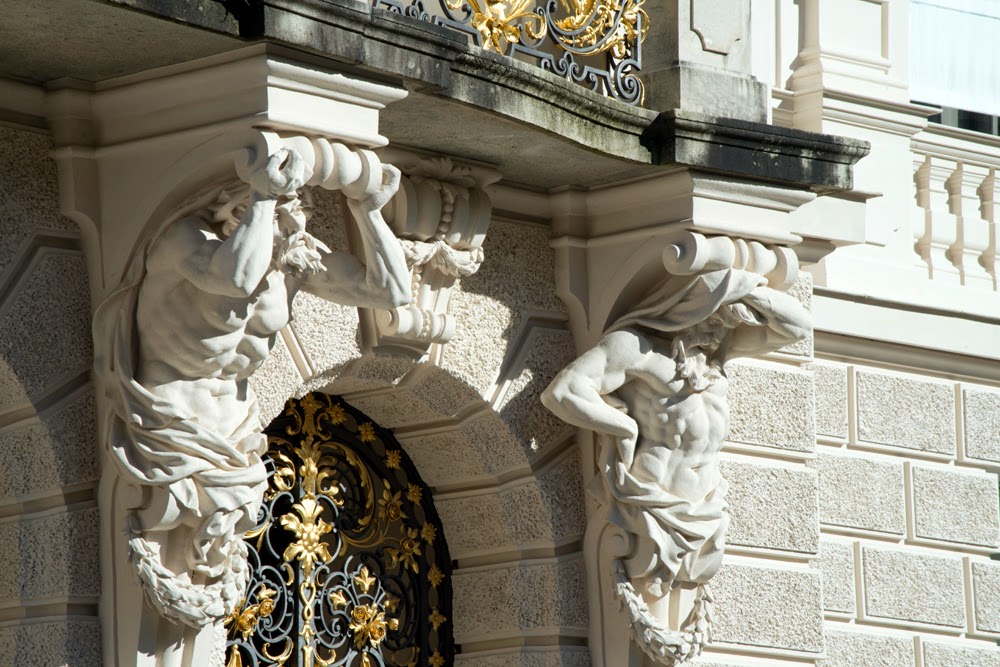 You can see evidence of Ludwig II’s high regard for French King Louis XIV in many details of this palace. Here’s the sun-king-like gold detail on the balcony railing. He changed the sun emblem of Louis into the Bavarian lion: 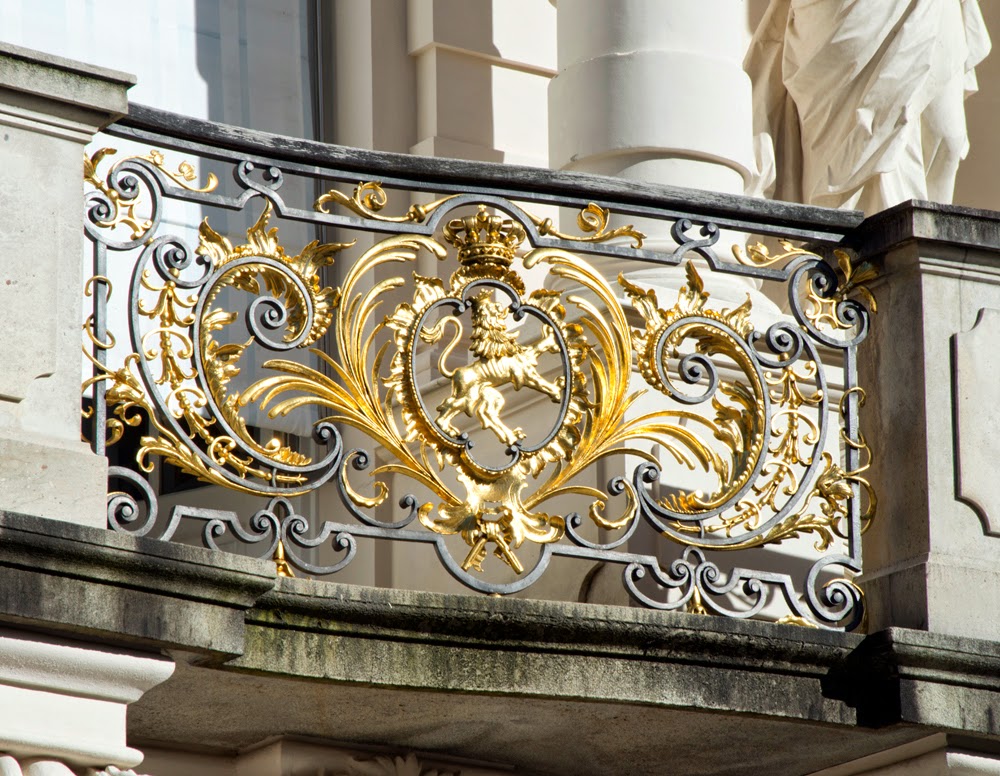 And the grounds are a park in themselves. Here’s a shot I took with my back to the facade of the palace: 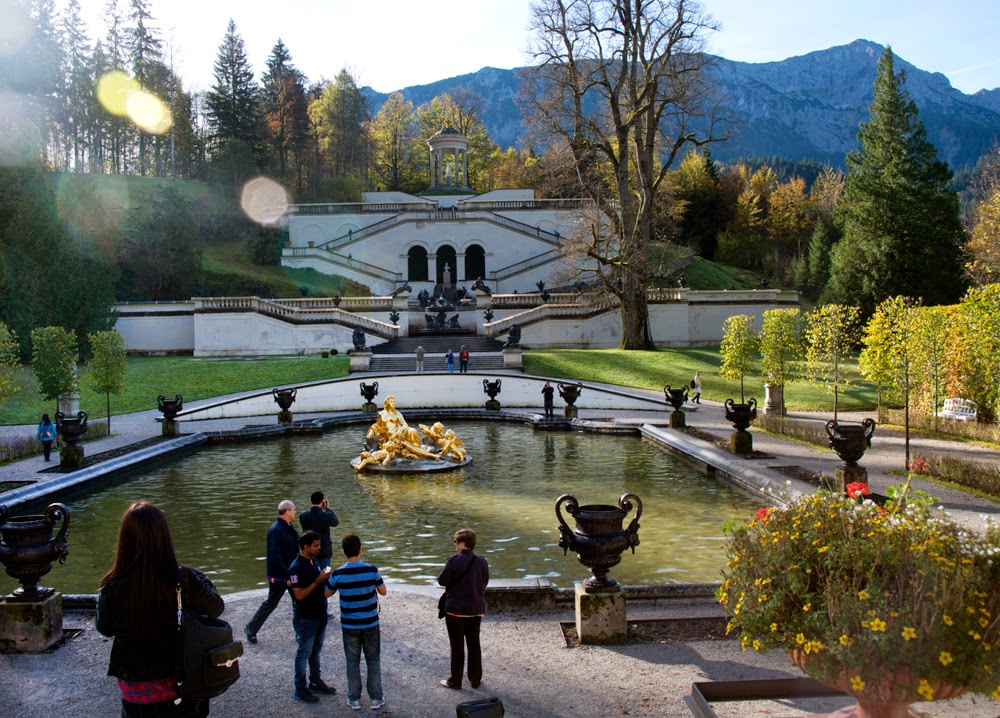 Before our tour started we had a few minutes to roam the grounds. Here’s a detail of the big bronze amphorae around the pool: 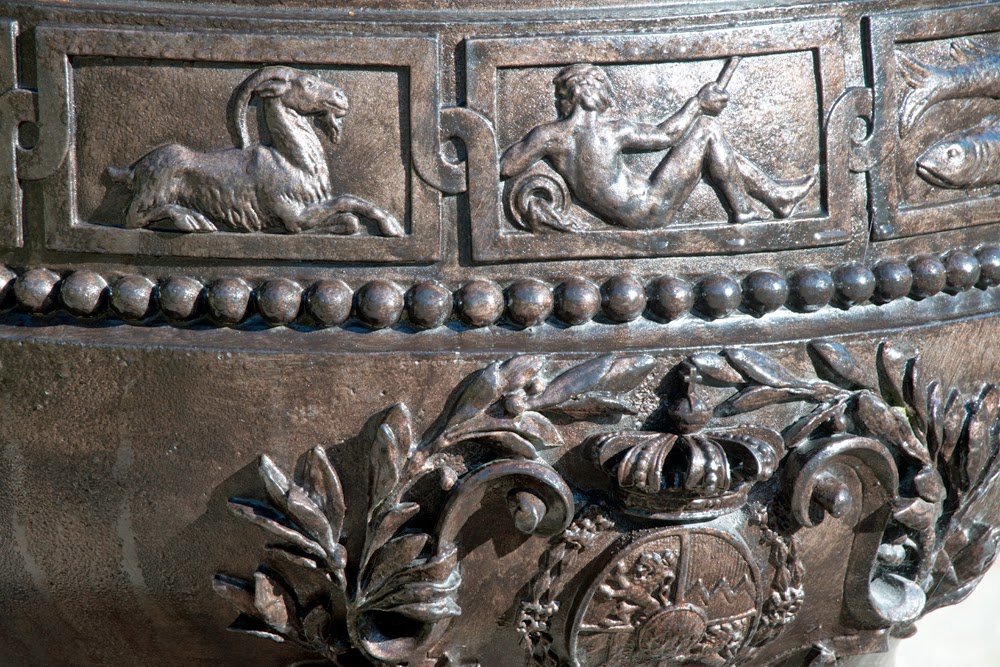 We wended our way to the rotunda you see in the photo above on the opposite end of the fountains and pools. There is a statue of Venus in the structure:

Then I turned around and took a shot of the palace while standing with my back to the rotunda: 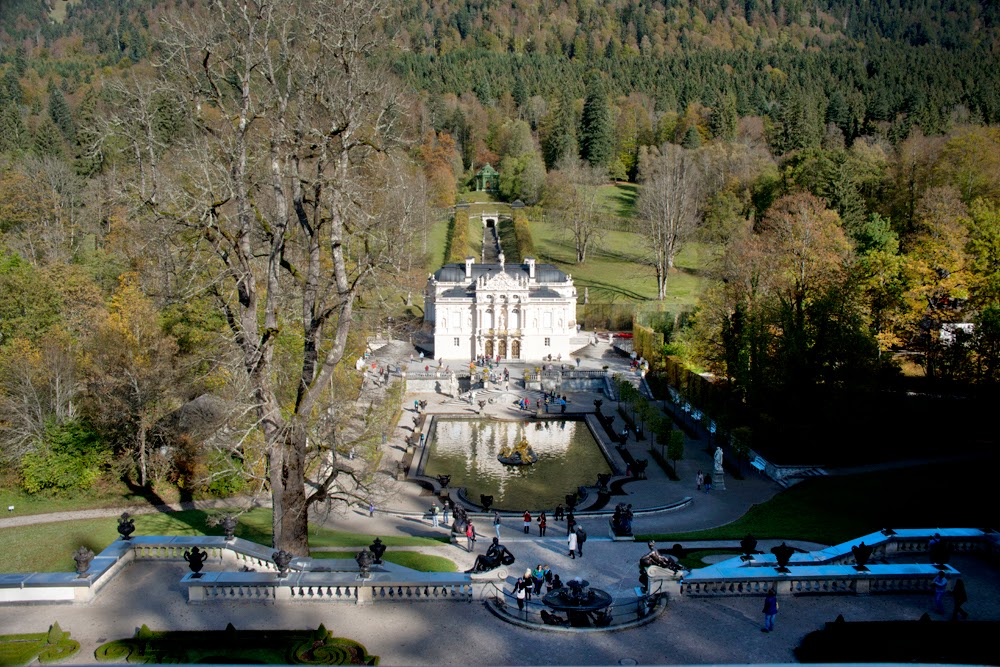 In the rear of the palace there is a cascade of water that runs from a natural spring down a long series of marble steps to the fountain at ground level with the back door. The cascade is lined with hedges on both sides. Our tour guide told us that this cascade was a kind of air conditioner. When the doors of the palace were open in front and back, the cool air flowing over the water flowed through the palace.

Unfortunately we weren’t allowed to take photographs inside the palace. But the ten rooms that Ludwig II occupied were stunning! They were colorful and richly appointed, of course, with porcelain candelabra, vases, sculptures and mirror frames made at the famous Nymphenburg porcelain factory. Wood carving and sculptures were everywhere. The guide told us that 5 kilos (about 10 pounds) of gold leaf was used to gild the entire palace. Mirrors abounded, and there was a fireplace made entirely out of gorgeous blue lapis lazuli from Afghanistan.

I tell ya, I could easily live in this cozy little palace. The royal bedroom and much of the other rooms were cloaked in heavy, luxurious, rich blue tapestries. Since Ludwig II did not receive official visitors, there was no throne room. It was obviously an intimate residence that he was personally involved in designing. It meant a lot to him by all accounts and it was a privilege to get to tour it.

Once again, I was surprised by something that I considered an insignificant part of a sightseeing tour. Linderhof turned out to be a shining jewel that I didn’t even know existed.

Next week: pictures of Neuschwanstein, Ludwig II’s castle that Walt Disney modeled the Sleeping Beauty and Cinderella castles after. You’ll recognize the silhouette! 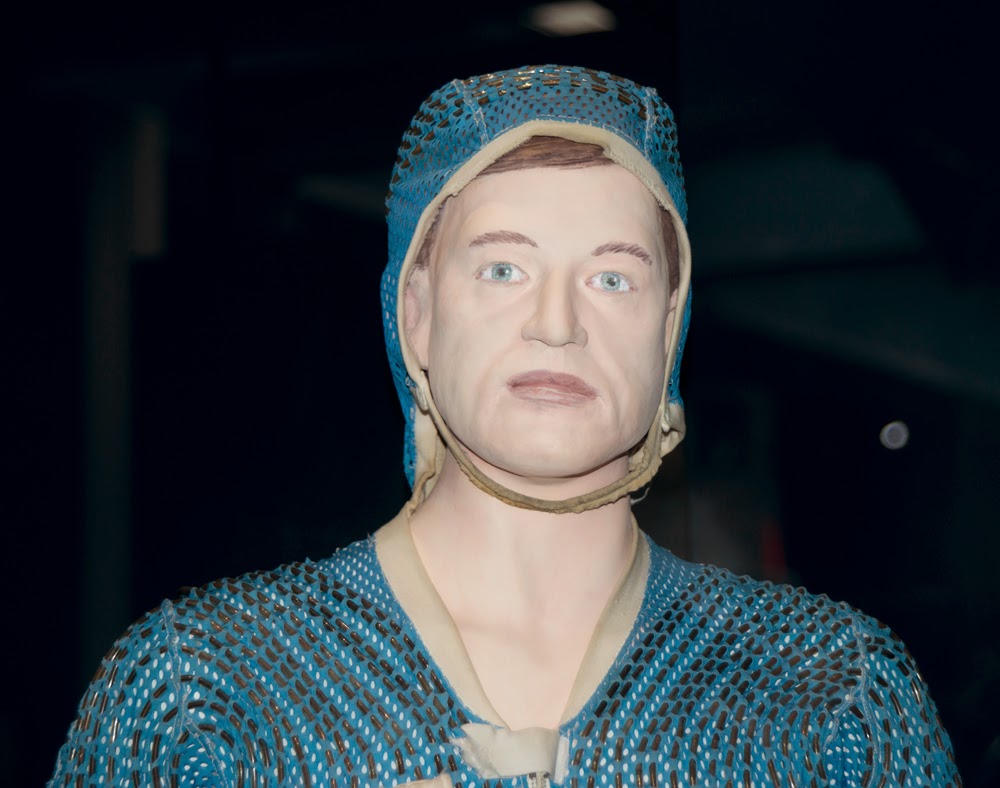