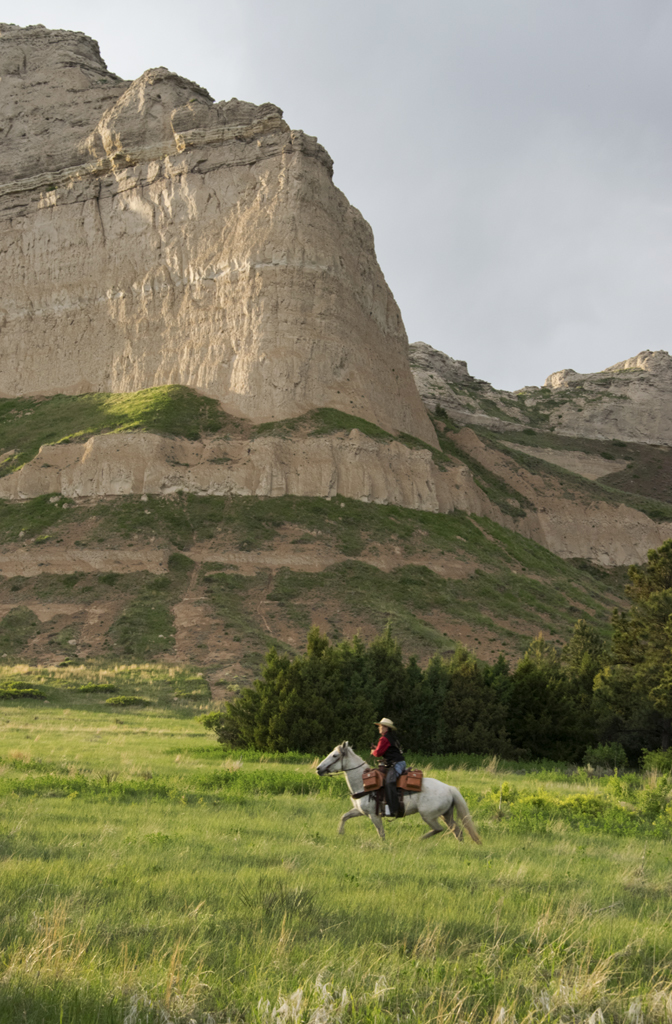 I left you hanging last week waiting on the Pony Express in Scotts Bluff, Nebraska, in the parking lot of the Scotts Bluff National Monument. Oh, yeah, and the rider was four hours late. And there was a really intense thunderstorm.

I just sat in the car in the rain with the wind rocking it back and forth, just like about ten other cars in the parking lot. But about 7:30pm or so, a heavenly break in the clouds materialized in the west:

And a wonderful rainbow appeared across the road: 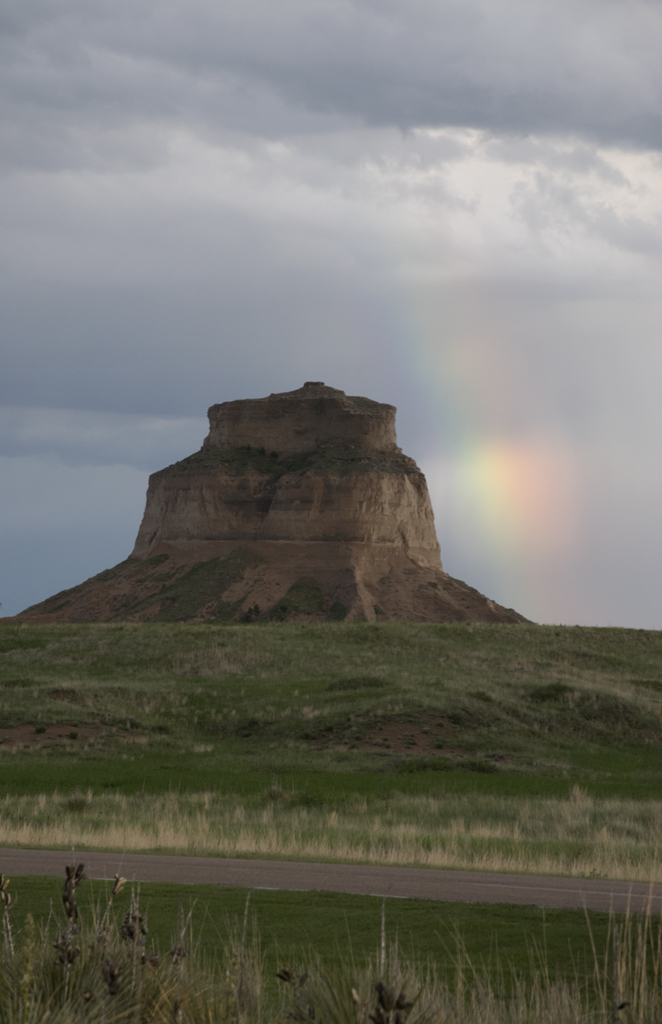 These were very good signs indeed! Also at that time, the fresh rider arrived and unloaded a fresh horse from a trailer: 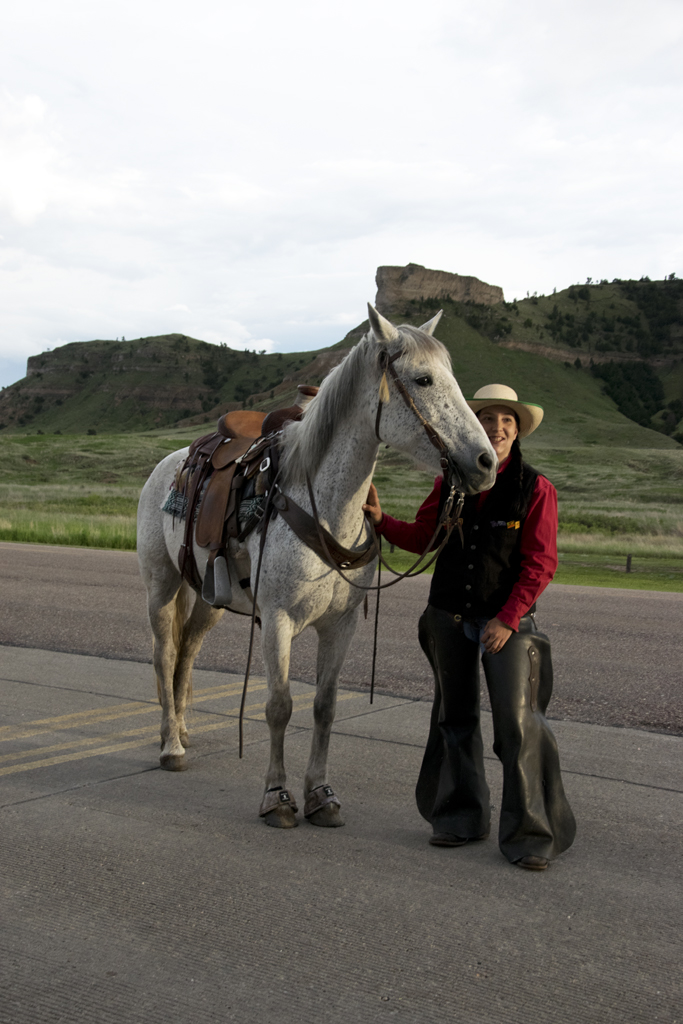 I shouldn’t have worried about lighting for my photos. See that beautiful golden sunshine pouring through the clouds?

I was gratified to see that the rider was a woman. Excitement was building! We were all out of our cars and on the road at that point – the rain had stopped and a chill wind was blowing, but I don’t think any of us minded.

About a half hour later, shouts went up: “The rider is here!” And this is what I saw coming out of the storm clouds in the east: 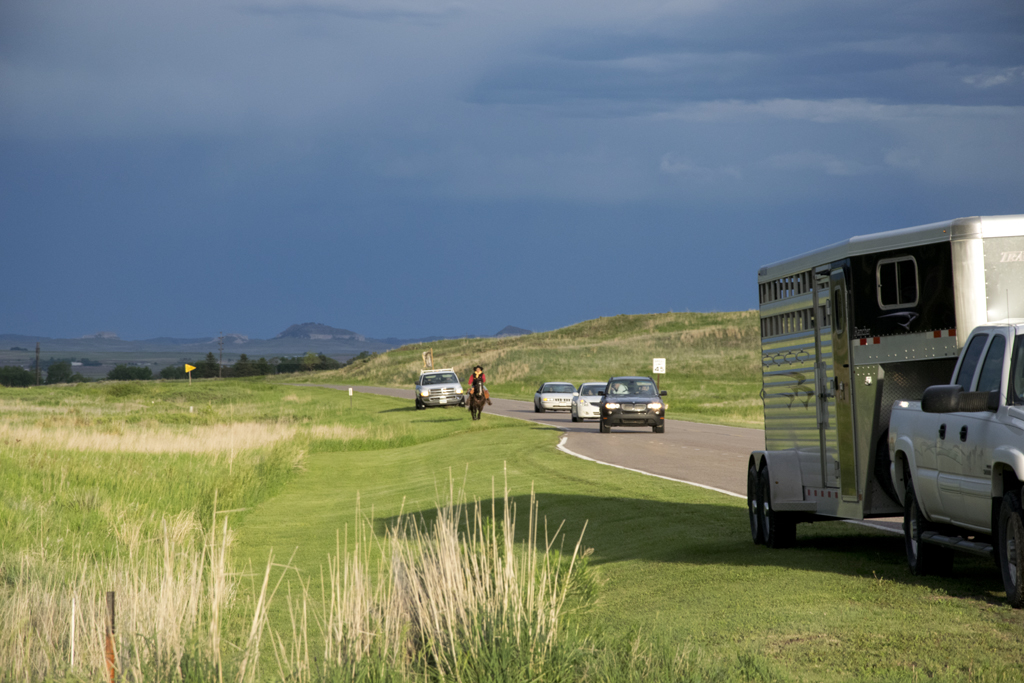 In the above photo you can see the fresh horse’s trailer in the foreground on the right, three escort cars in front of the rider, the rider’s red shirt as the horse trotted nearer, and the fourth escort vehicle bringing up the rear. I was standing with my back to Scotts Bluff.

As the rider grew nearer, I could see that she was a woman, too! She urged the horse into a gallop for the last few steps. Drama queen! 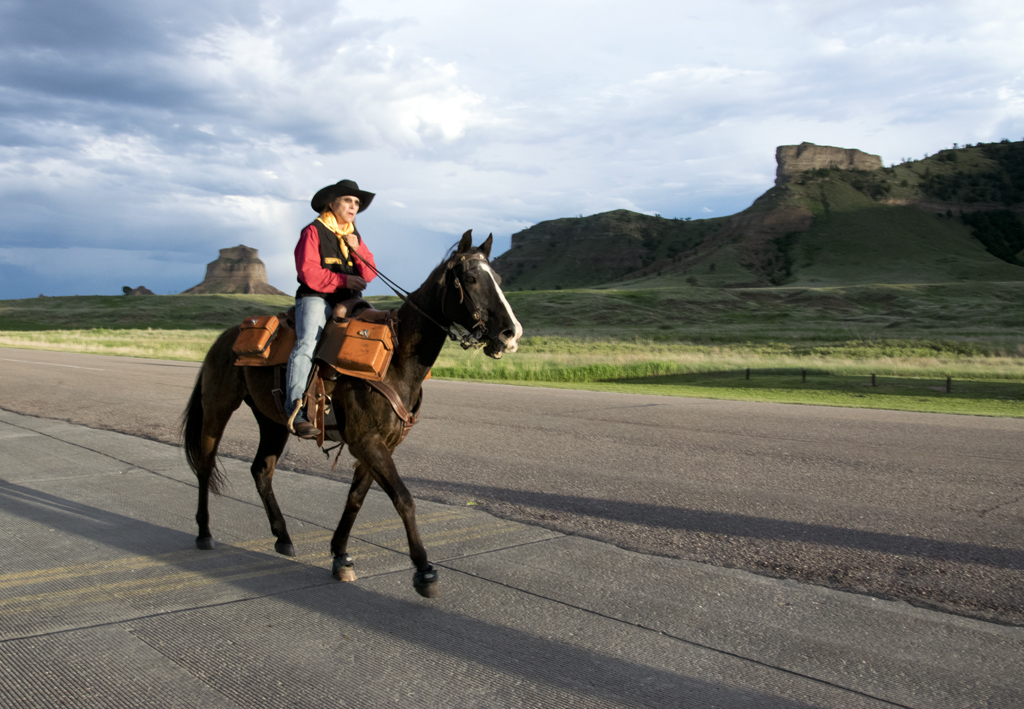 Once she veered off the road onto the trail, a small team immediately set about removing the mochilla (leather mail-carrying saddlebags) from the arriving horse and placed it on the fresh horse: 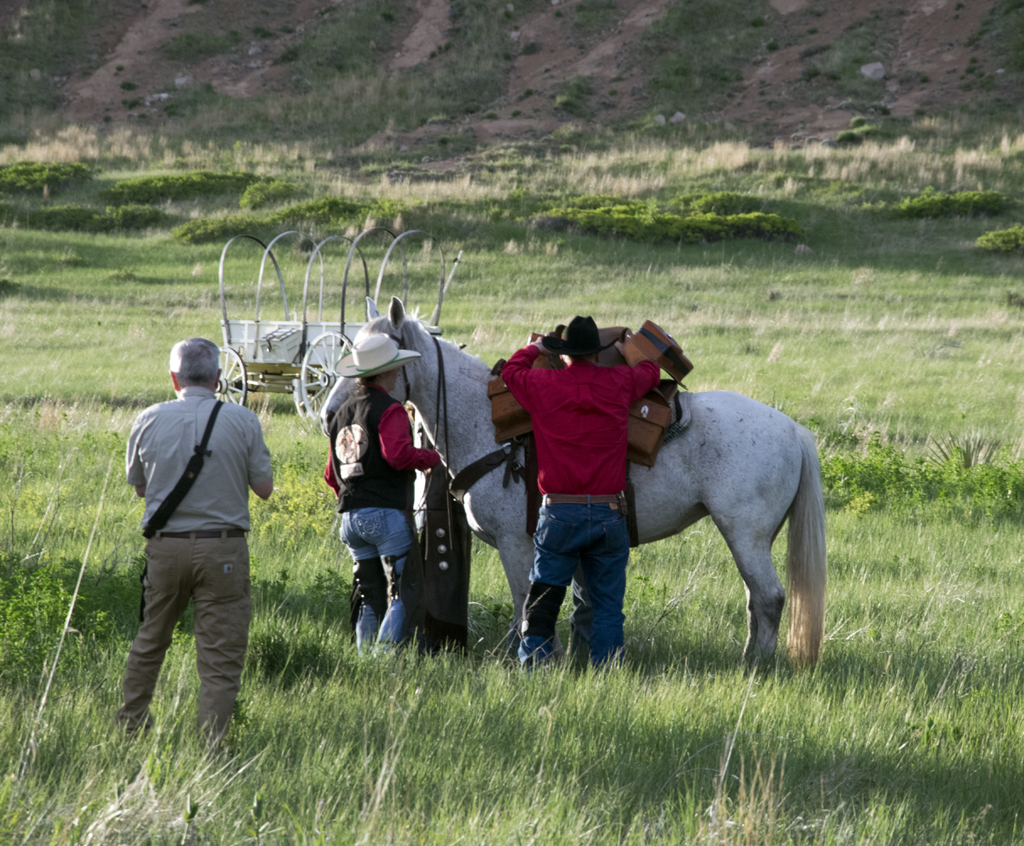 Then the fresh rider swung up onto her mount and was away! You can see there were several people in the way of my getting a good shot, but I wanted to watch also, which means I missed a couple of good opps. But I did manage to get this one with the Bluff in the background:

Here’s the scene as the fresh rider literally rode off into the sunset: 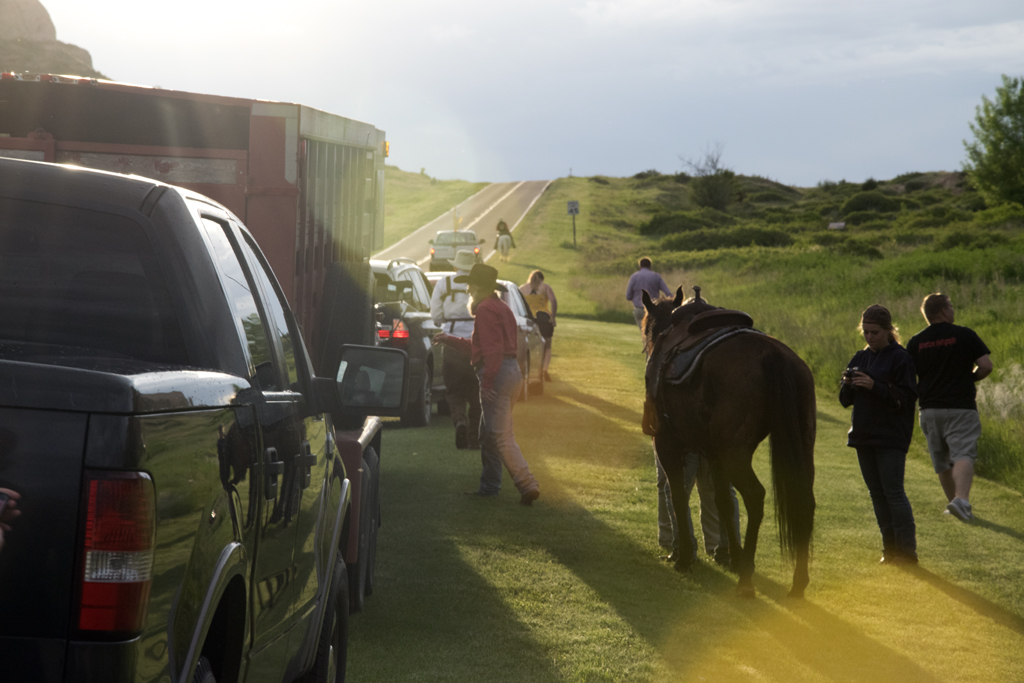 And, although you can’t see the rider very well in this shot, I like the dramatic effect: 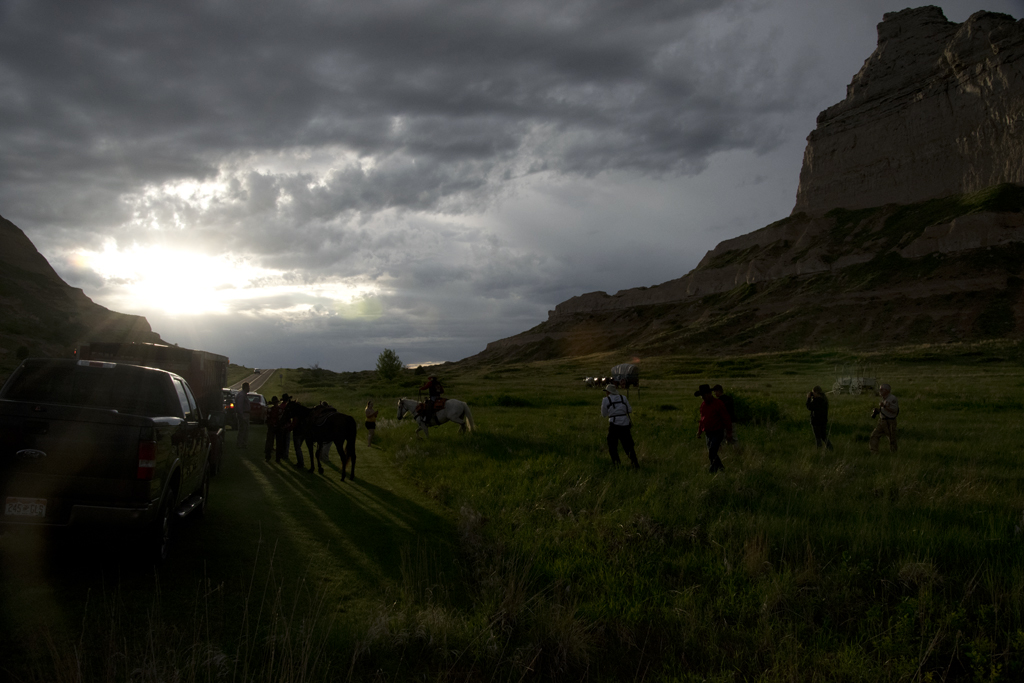 The arriving rider hung around for a while to talk to us and I got this shot: 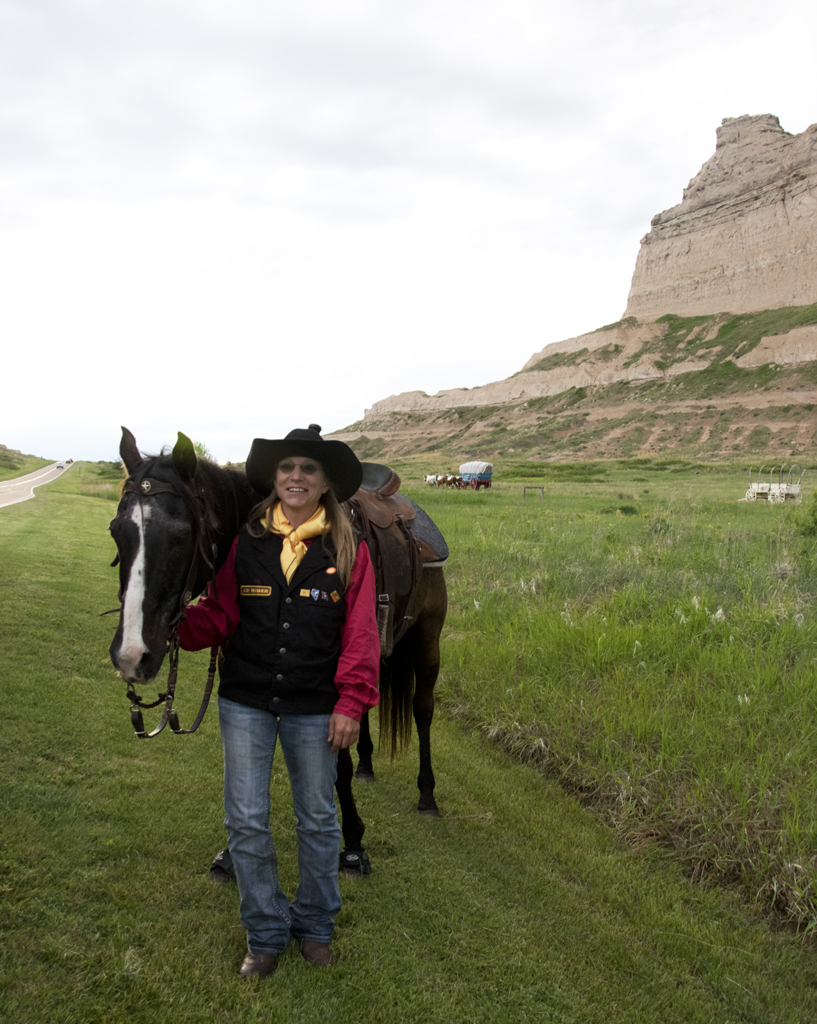 The horse’s name was Ricky-Bobby!

As the little crowd dispersed and I was making my way back to the car, I overheard a woman say exactly what I was thinking: we’d waited hours and hours for two minutes of action. She compared it to seeing the eclipse a couple of years ago, which I’d also done. Both of us had the same opinion: “Totally worth it!”

Epilogue: All this was on 12 June. You may remember from my Gothenberg, NE post that I discovered you could send in a form, some money and two box tops (just kidding about the box tops) and have a letter carried by the riders. I sent my form and $10 (there’s a $5 option as well) to the PE Association. They put it in the mochilla in Missouri at the beginning of the ride, and it rode all the way to Sacramento – it was in the mochilla as the horse went past me in Scotts Bluff! Toward the end of the month, I received my ordered letter, with the coveted commemorative postmark (boy, WAS it commemorative!) and a history of the PE inside: 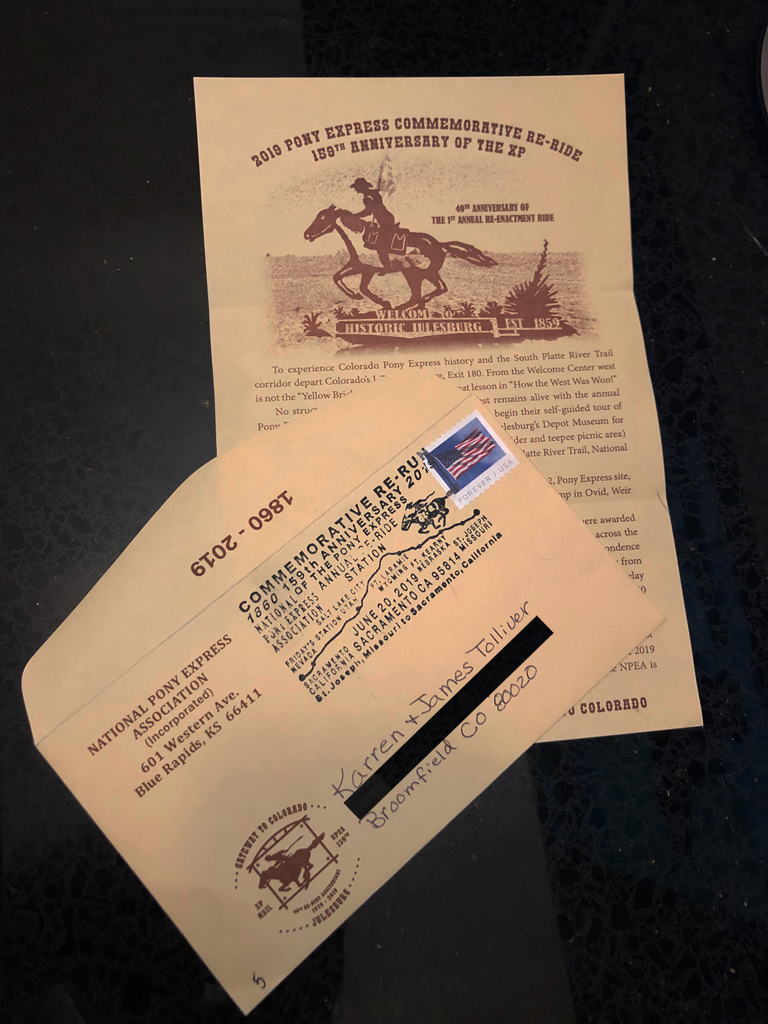 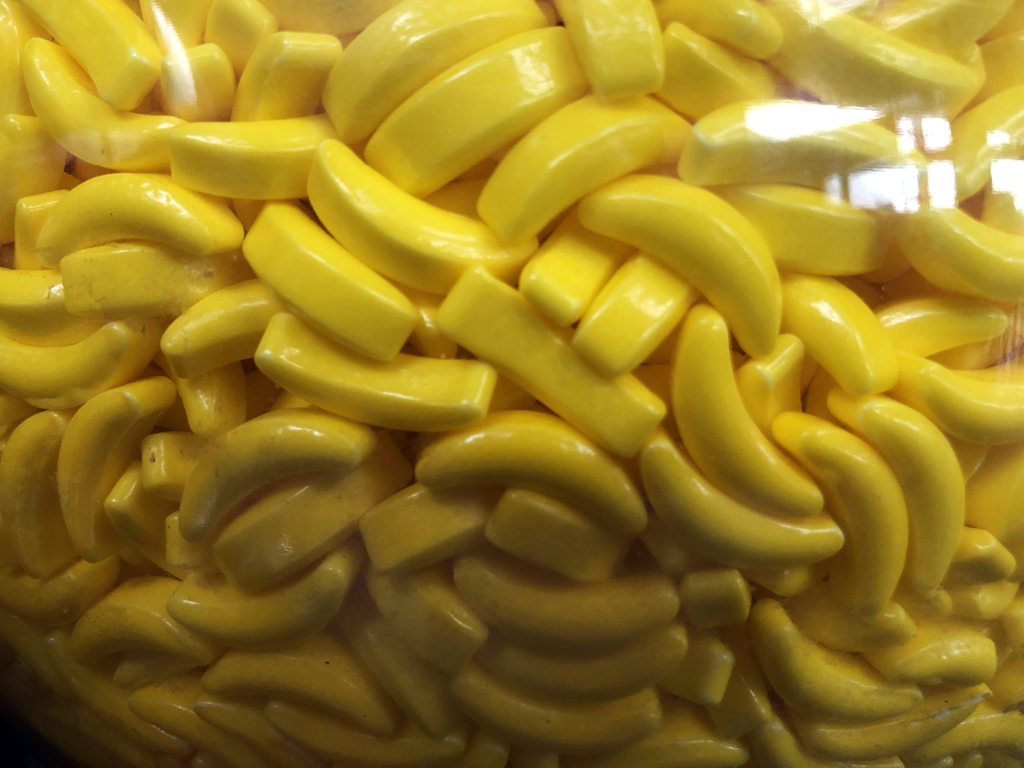