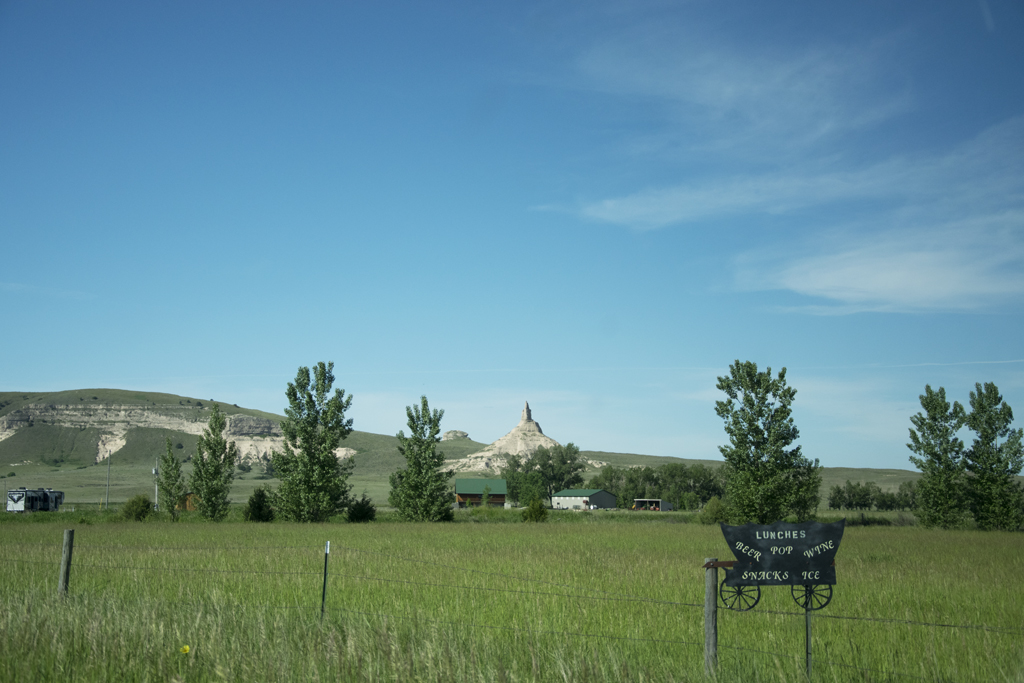 I told you that I witnessed this year’s Pony Express re-ride in Nebraska earlier this summer. Since the ponies weren’t supposed to show up til later in the day, I took the opportunity that morning to visit Chimney Rock. I was in Scotts Bluff, Nebraska, and I had to drive only about 20 minutes to the Chimney Rock National Historical Site, as they officially call it.

On the way, I saw a crop of longhorns sprouting in a field: 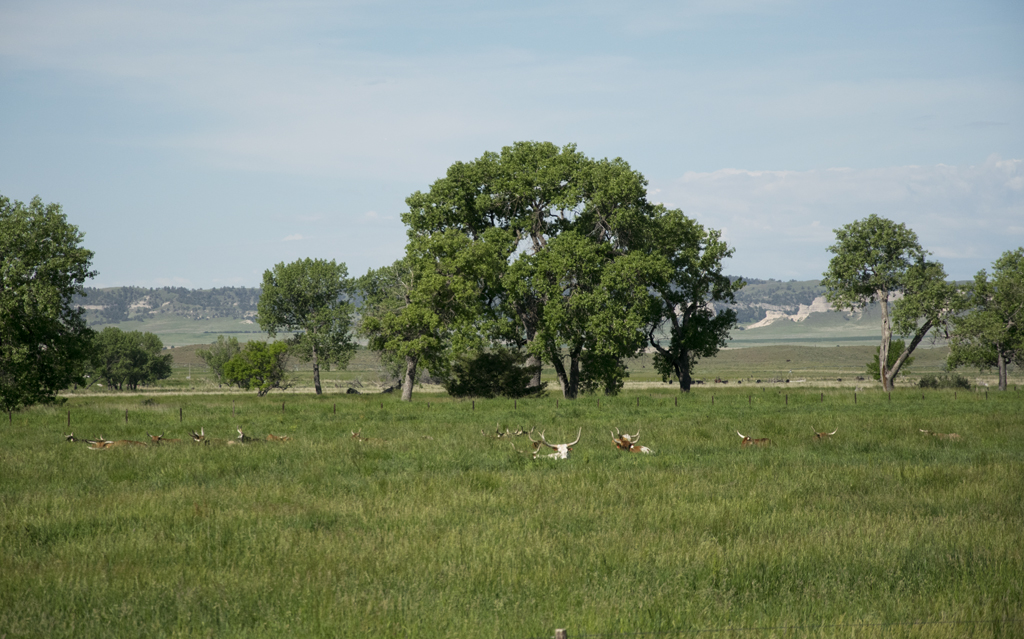 And I saw them working on the railroad all the live-long day: 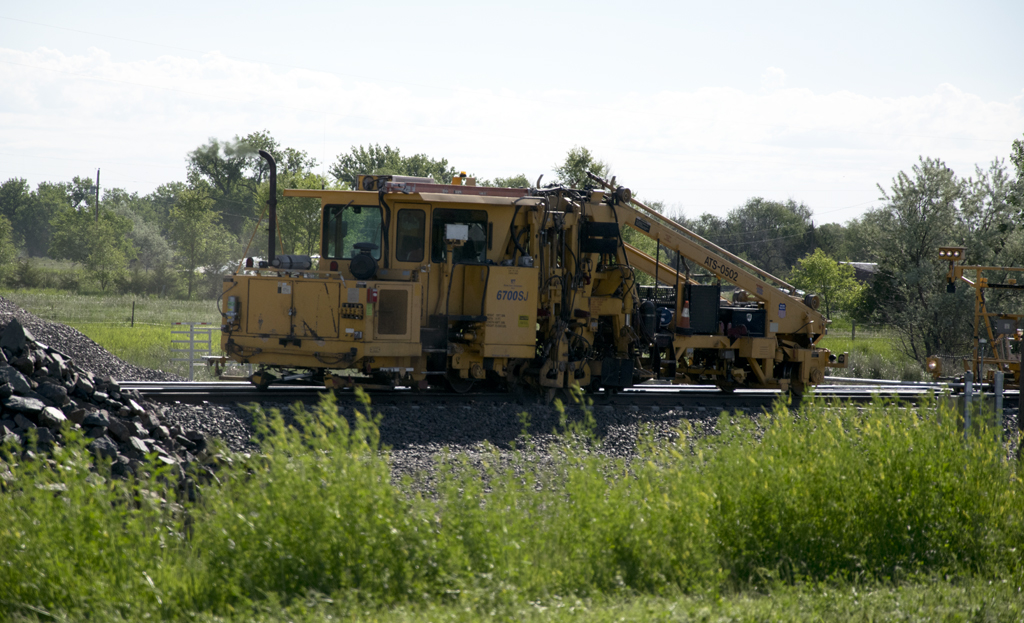 Finally I caught my first glimpse of Chimney Rock from the highway. Then, as I took the turnoff to the visitor center:

You can see for yourself that it lends itself perfectly to being a major landmark for pioneers on the Oregon Trail, and for Native American tribes before that. On the side road was a themed tourist snack bar, which wasn’t open at the time: 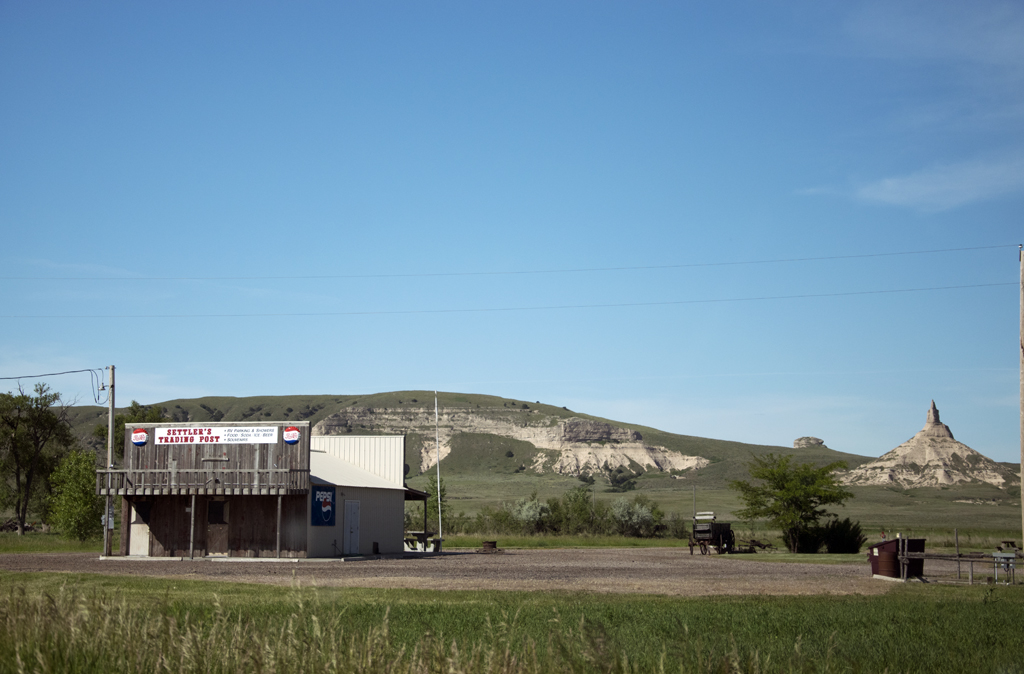 From the visitor center parking lot: 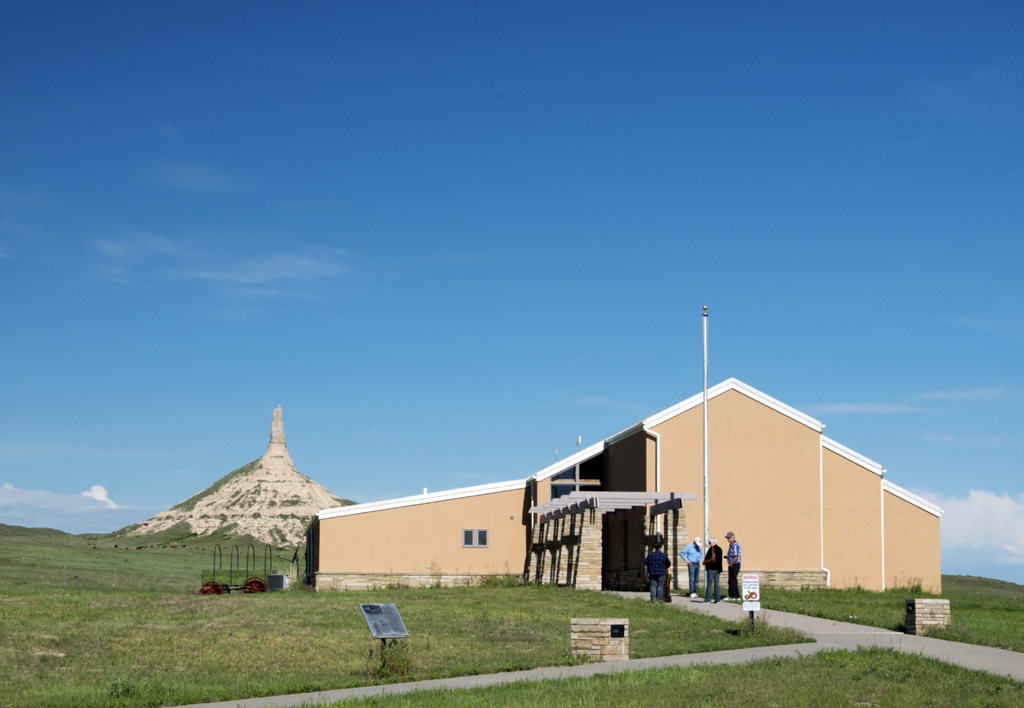 And some drama as we waited for it to open:

No, it wasn’t a rattler, just a bull snake. The staff there said the bull snake was resident there and helped keep the rattlers away from the center.

Anyway, I entered the visitor center and paid the fee ($3.00) and beelined it out the back door to get these shots: 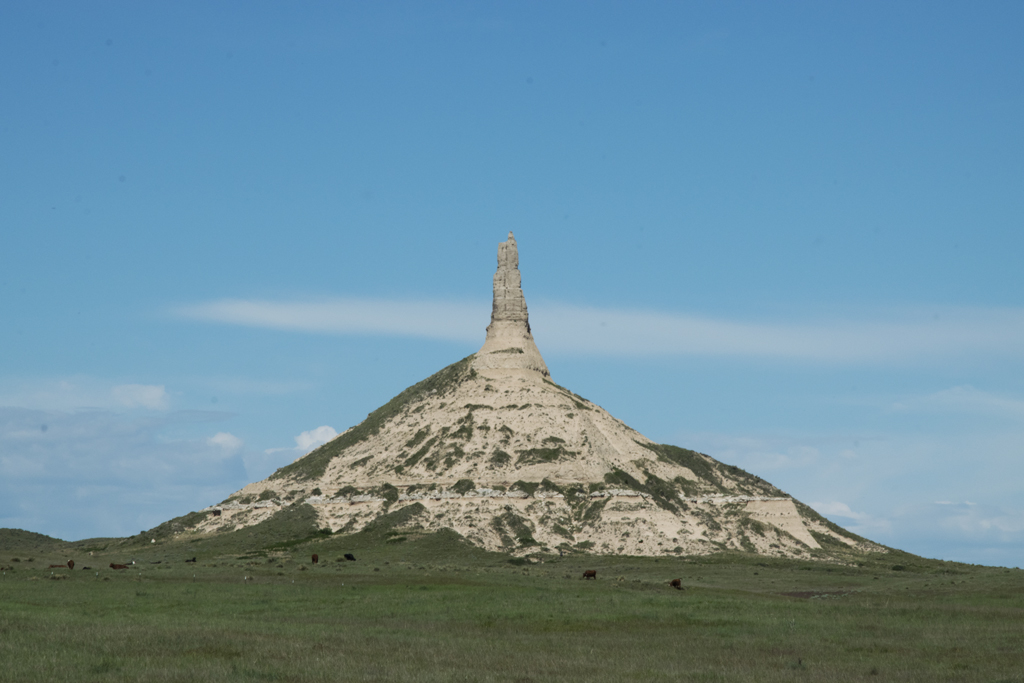 Here you can see the spire that rises about 300 feet above the conical base. They believe that it may have been 30 feet higher at the time of the westward settler migration. Layers of volcanic ash and brule clay compose the spire, the materials dating back to between 23 and 34 million years ago. From the base of the cone to the top measures 480 feet above those cows.

Here you can see the layers in the spire: 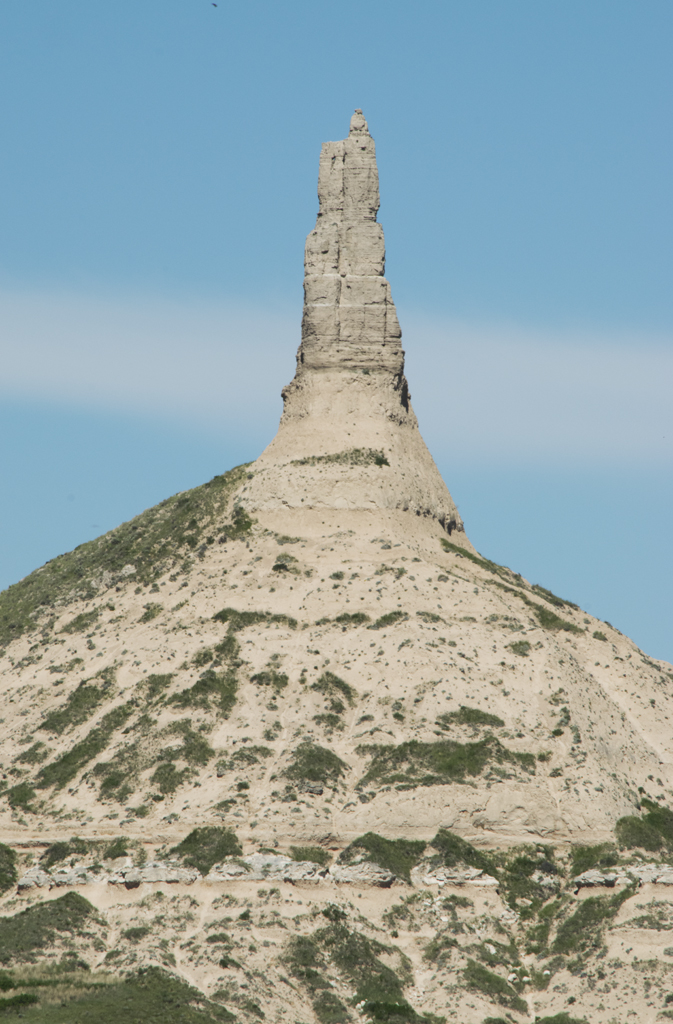 You can hike to the rock and do some climbing, but they caution against it because of the rattlesnakes that live in the area. So I opted out of the three-mile jaunt (ok, I wouldn’t have done it anyway).

There was the requisite covered wagon skeleton, too: 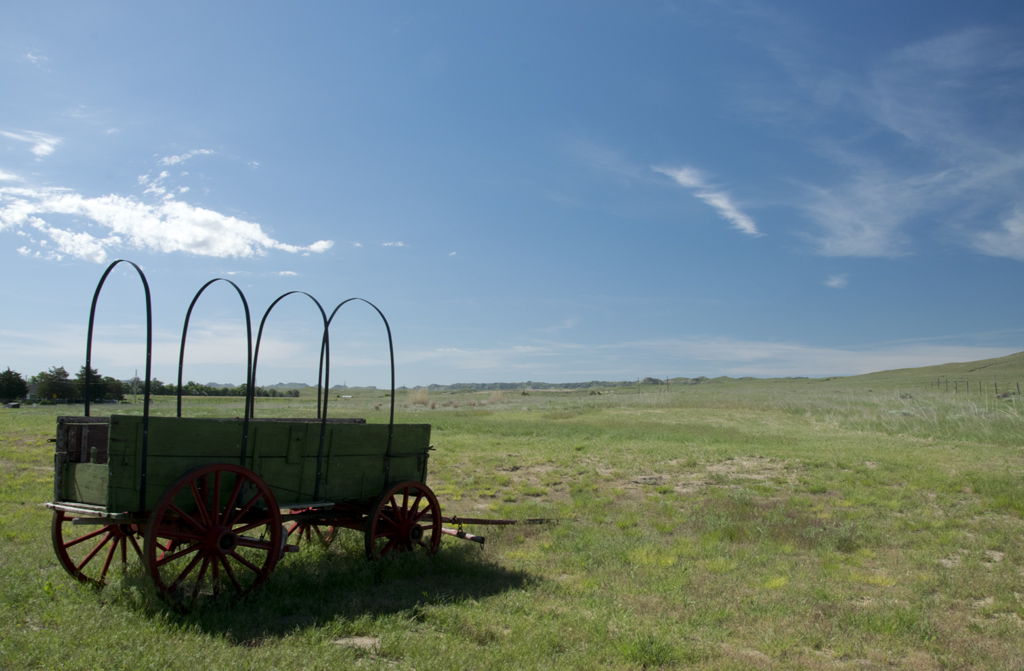 Back inside the visitor center was a thorough display in pleasant surroundings. A timeline: 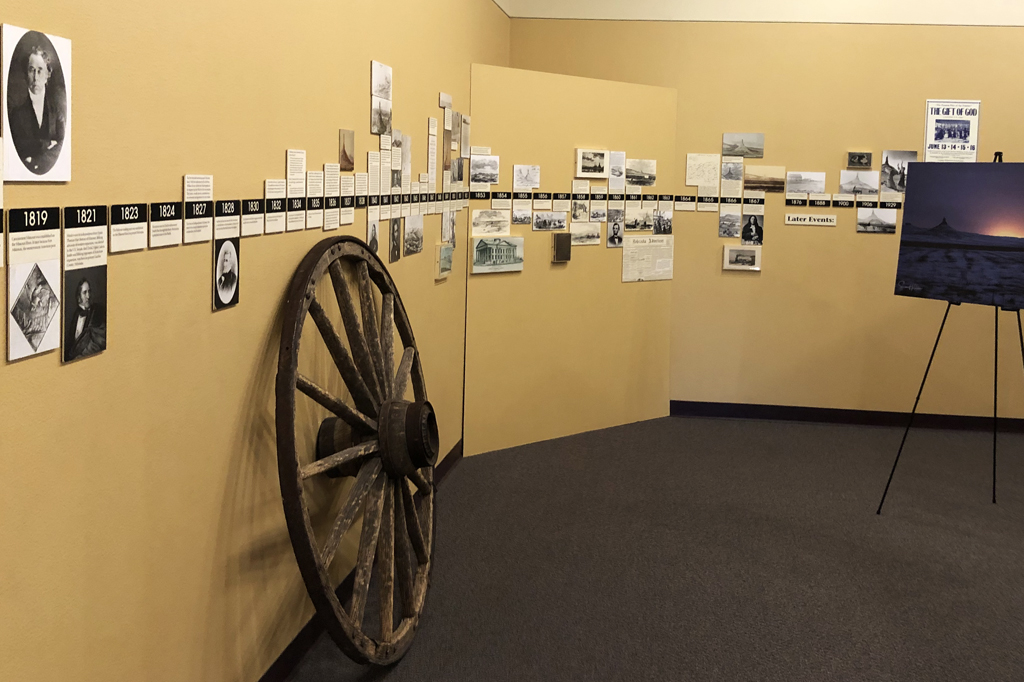 Lots of taxidermy from the area: 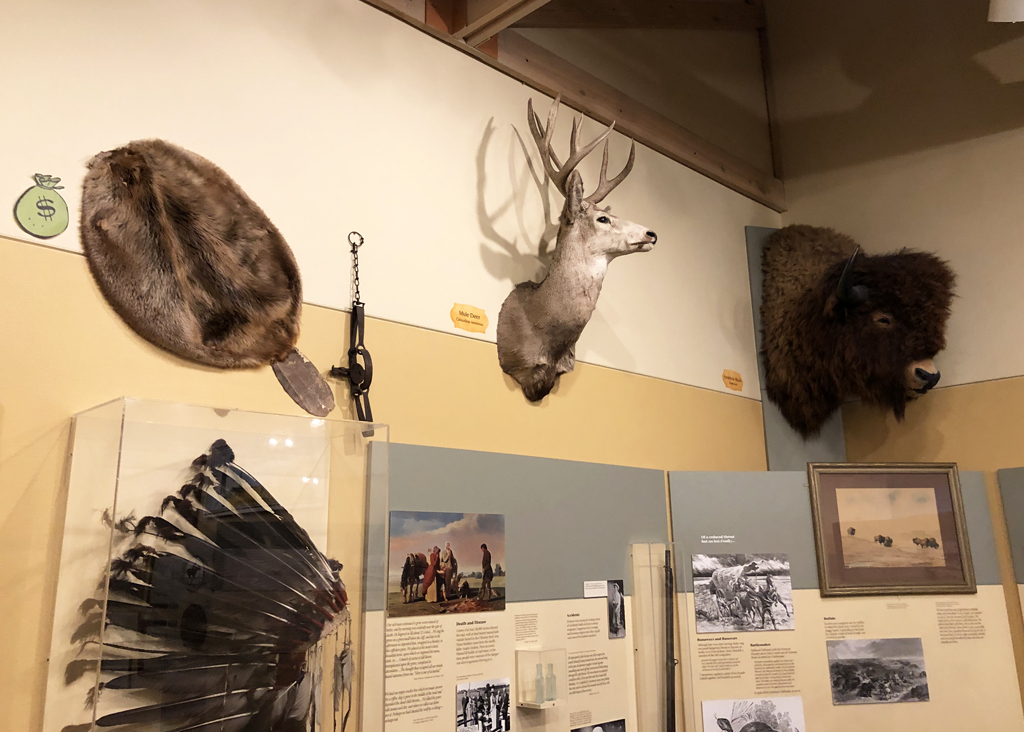 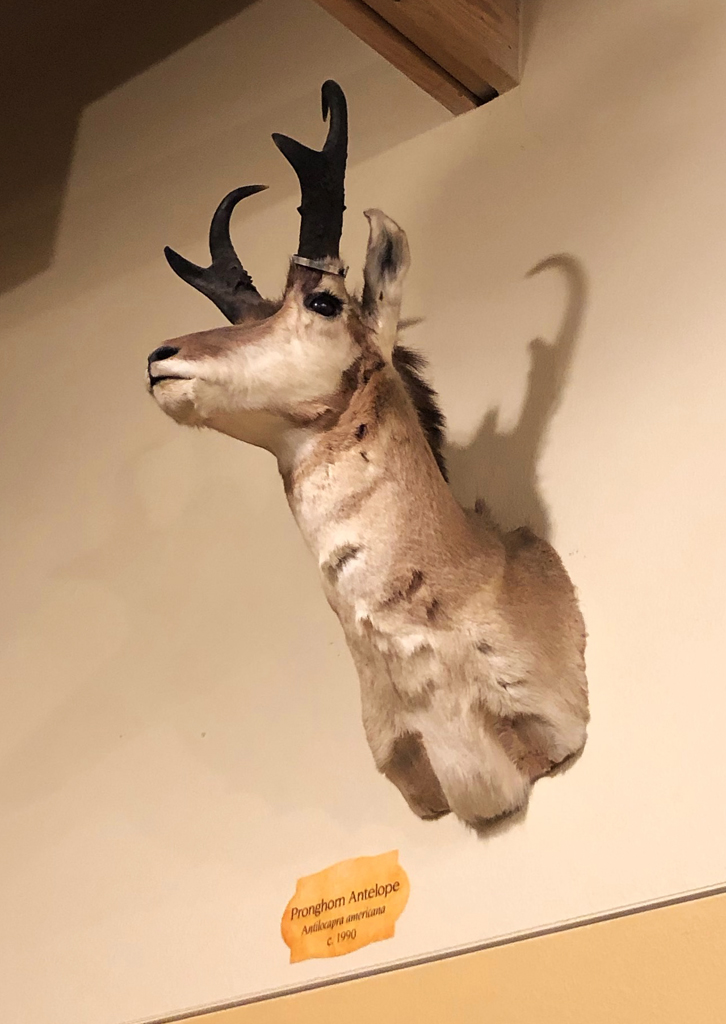 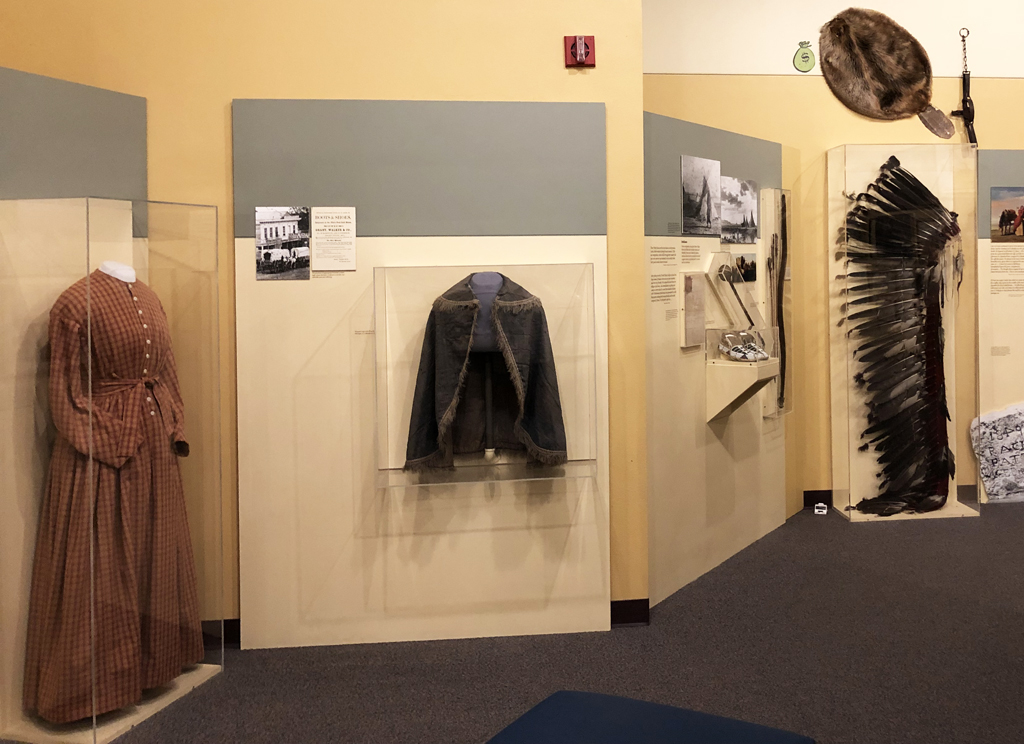 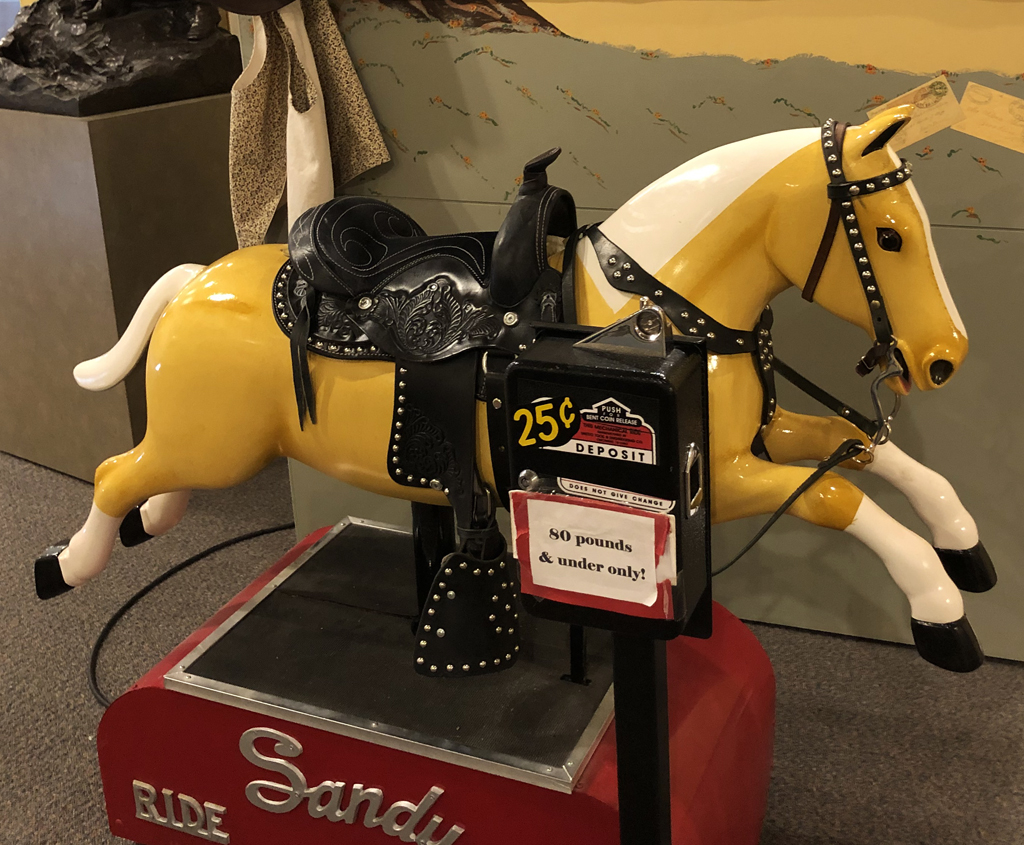 I bought a pin and a tshirt at the gift shop. My second favorite display there was in the kids’ area – a ring toss game made out of a model of Chimney Rock: 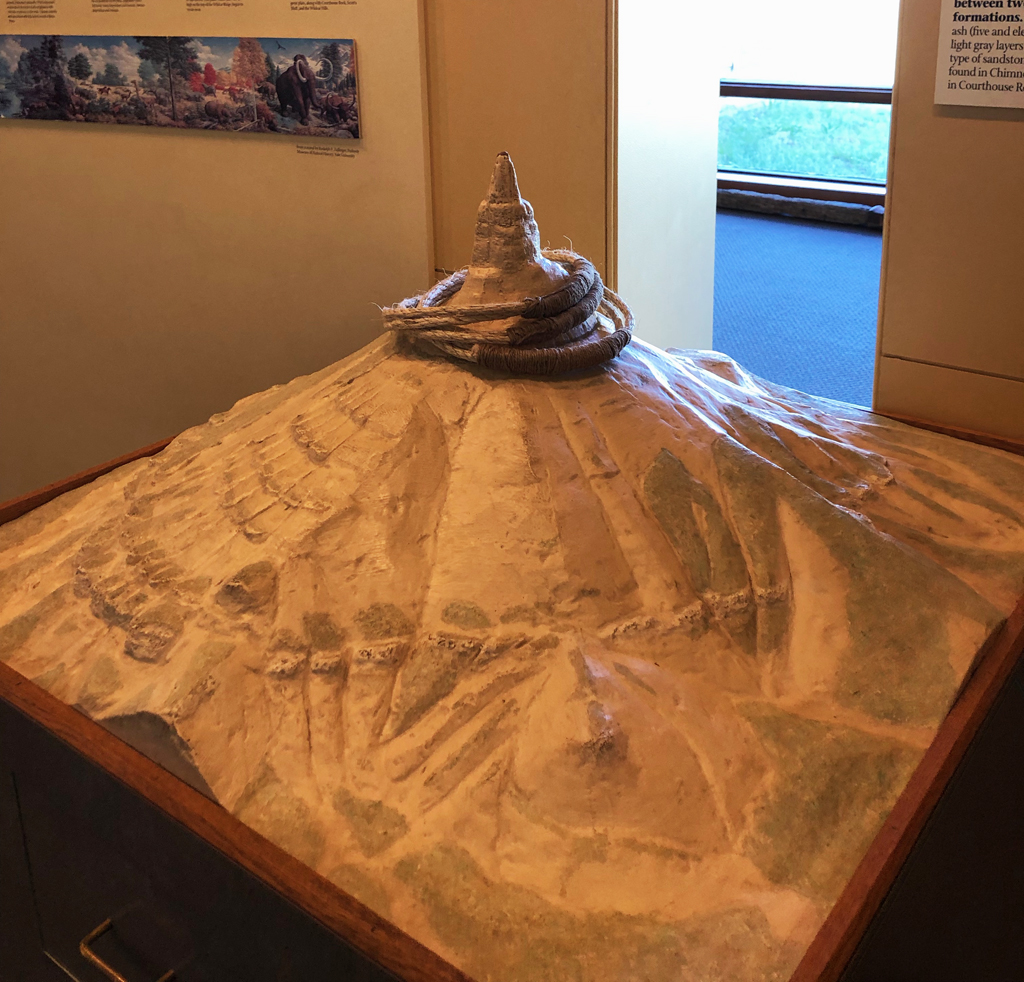 And my most favorite thing was the donation box: 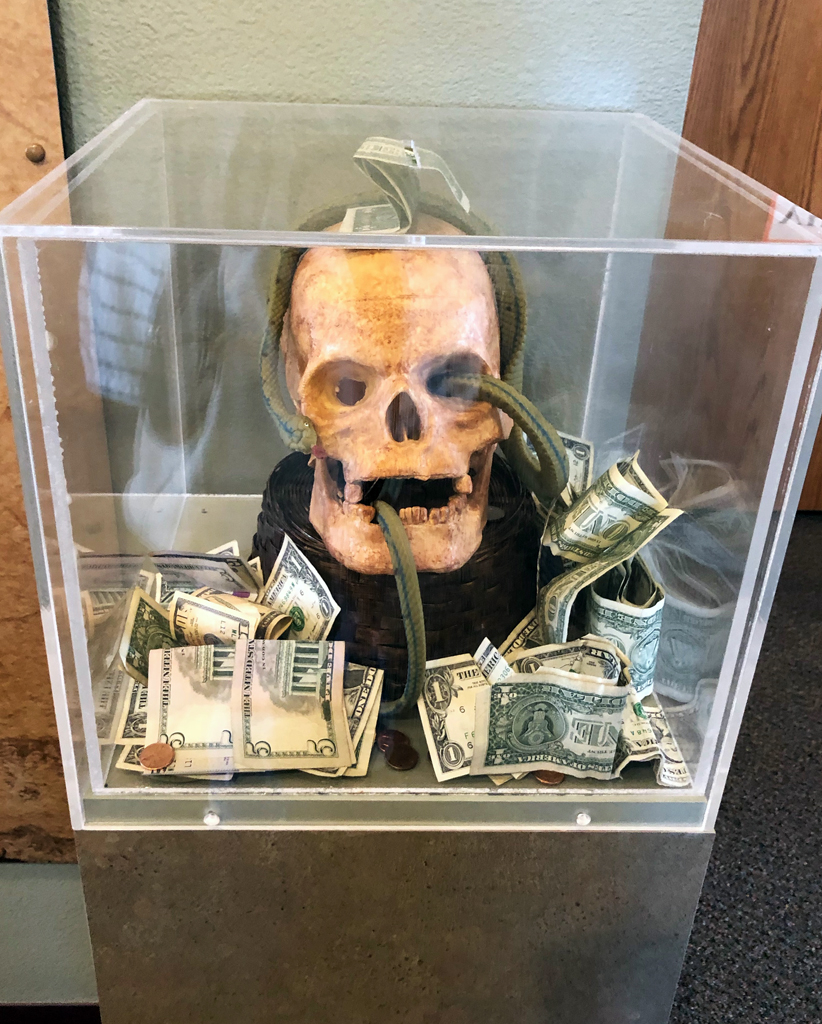 They said he showed up at Halloween and never left. My donation is hanging in the top slot for the photo. Yes, I pushed it in after I shot it!

What a great sight to see, and the visitor center was top-notch. Well worth the money and time to drive out there.

Note: there are other Chimney Rocks around, such as Chimney Rock National Monument in southeast Colorado, but this one in Nebraska is the one famous for being a landmark on the Oregon Trail. It’s somewhat remote, but the area has lots to see and was totally worth the trip! 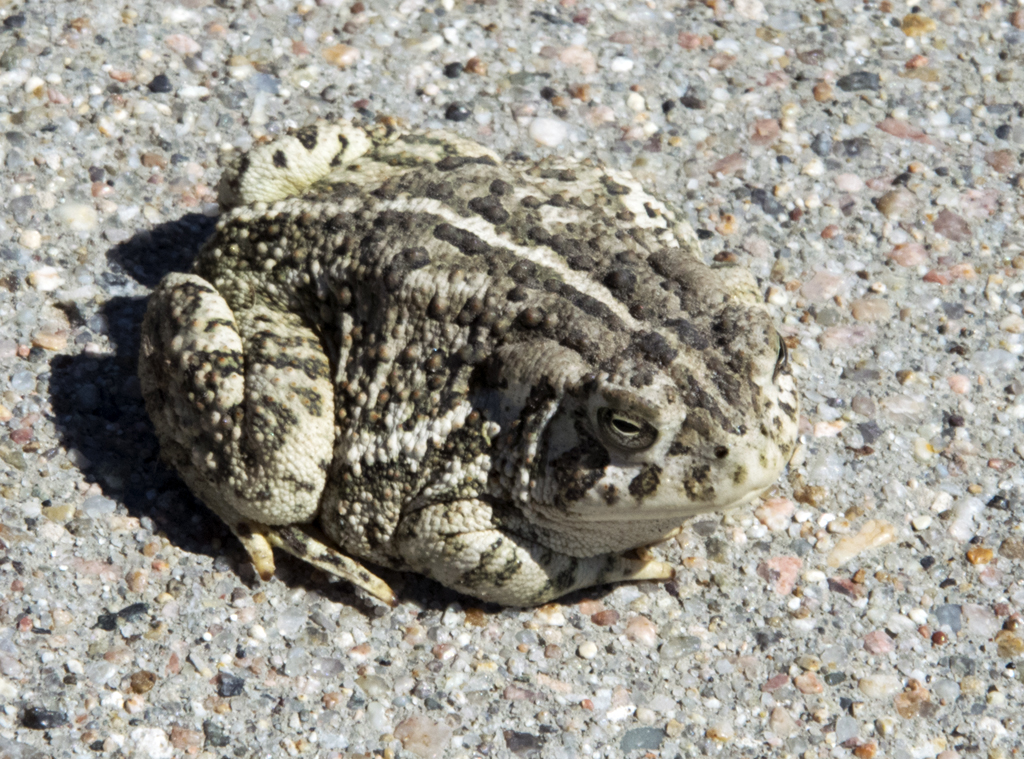