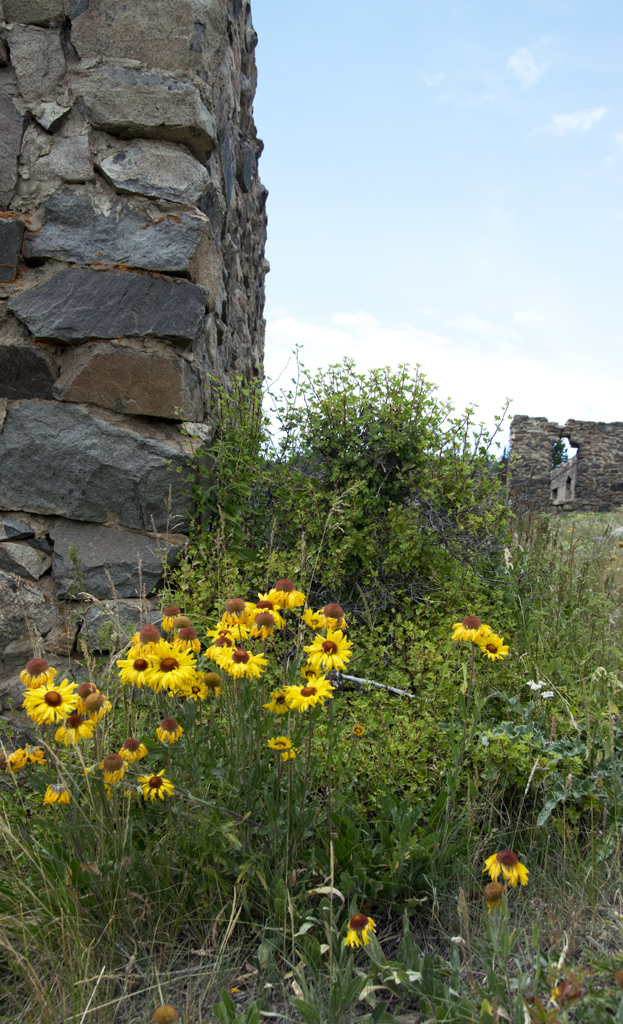 I hope you’ve seen my post about Dearfield, Colorado, which is a ghost town east of Denver, and the first ghost town I visited. As part of my more or less ongoing quest to see ghost towns, my second destination was Caribou, Colorado, a former silver mining town. I made this choice because it’s a daytrip from where I live and you can drive to it. Some ghost towns require a hike.

Caribou is located in the Arapahoe Roosevelt National Forest, just north of, and adjacent to, the Rocky Mountain National Park. My husband and I set out to find it, with directions from the web and a GPS that turned out not to know how to get there.

We drove the hour or so to get to Nederland, a very small, very hip mountain town a few miles past Boulder in the Rockies, which we’ve visited several times. Following the GPS, we ended up at Caribou Ranch, and the entryway looked like this: 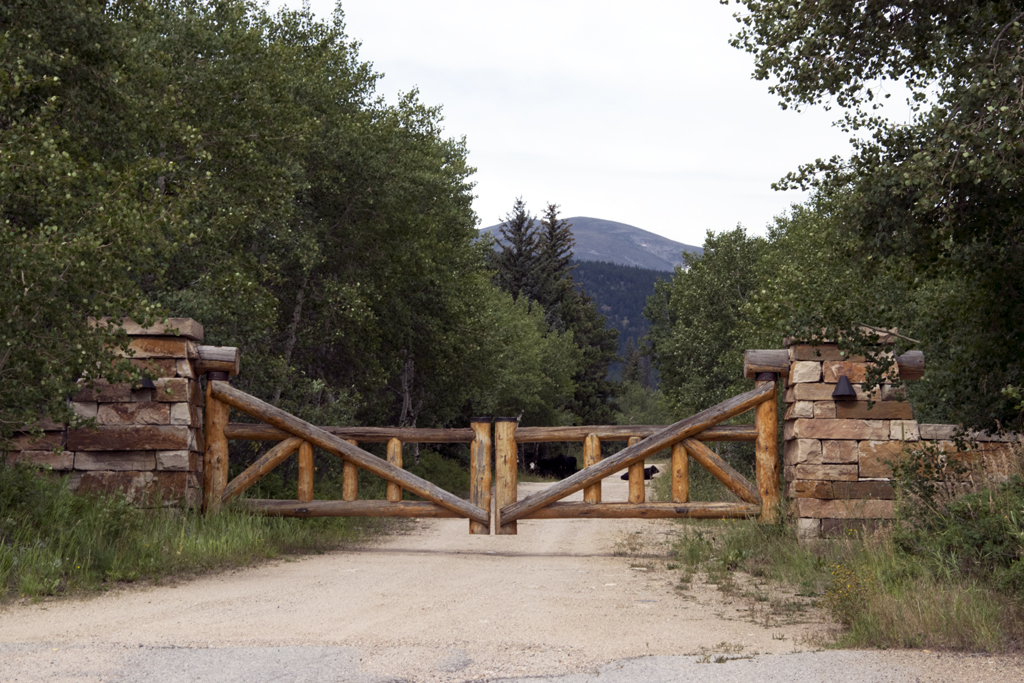 Well, that didn’t look like any of the pictures I’d seen, and those cattle beyond the gate didn’t seem very excited to see us. We decided to instead follow the written directions I’d found online. I figured we were getting close when I saw this abandoned mine along the main road: 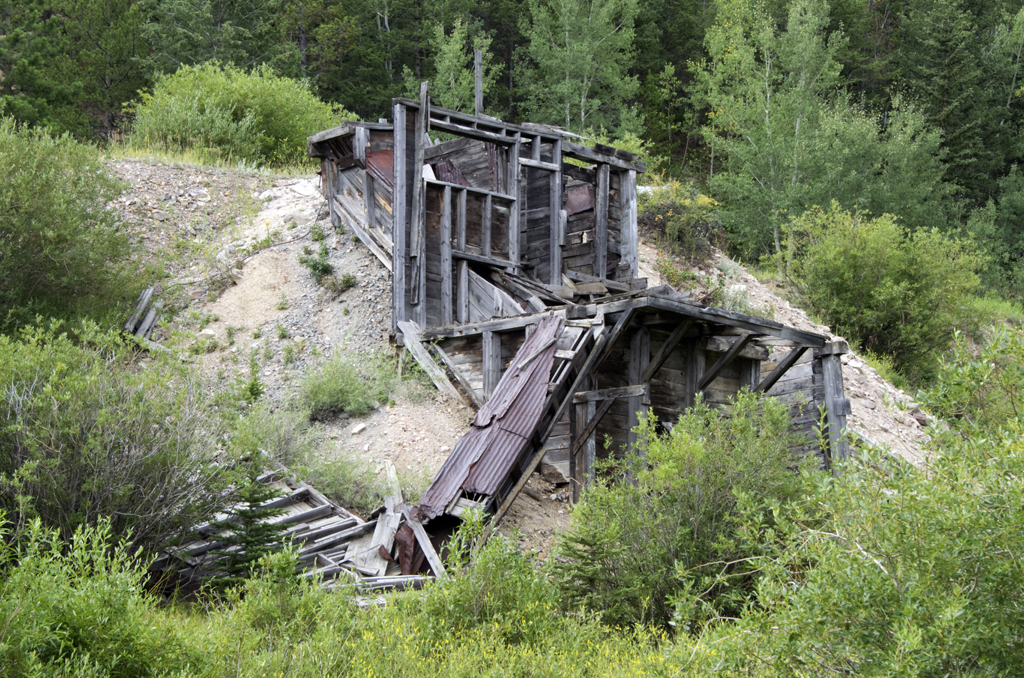 However, we couldn’t be sure, because the Rockies are literally littered with such sites. The directions said to head west from Ned on CR 128 for 4.7 miles and you’ll drive right into (what was) the town. And so we did. At 4.7 miles, we saw this: 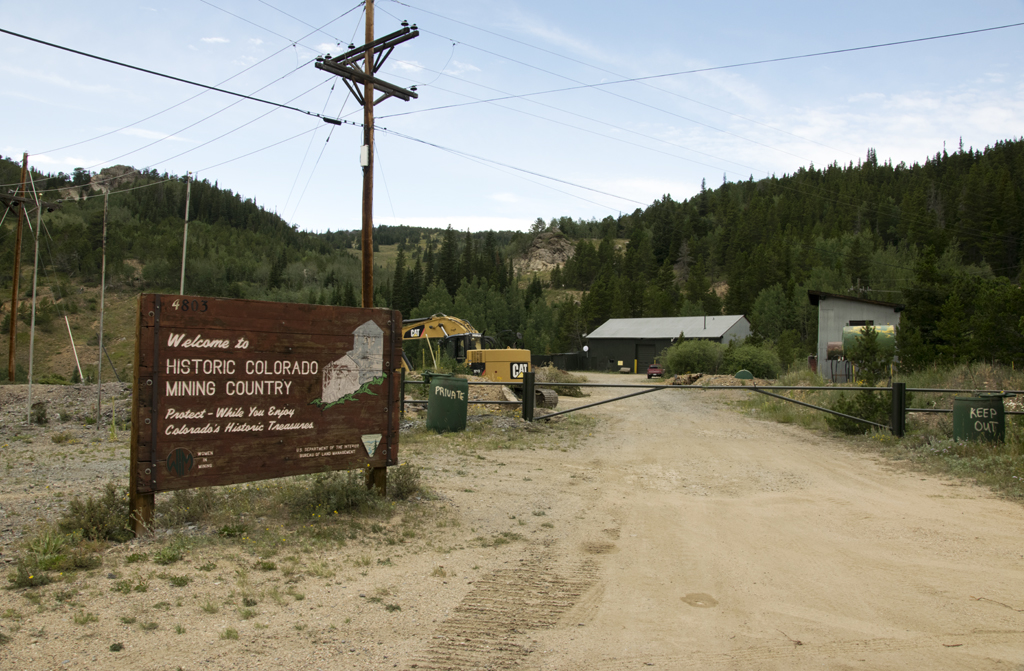 That is actually an active mine beyond the gate. It’s been revived in recent years – I read they’re mining gold there these days.

But the ruins of the ghost town were nowhere in sight. Since another website I’d seen said to drive five miles instead of 4.7, we continued on the fairly-well-maintained-but-nonetheless-dirt road. It was twisty and curvy and all I could see were trees and this amusing sign: 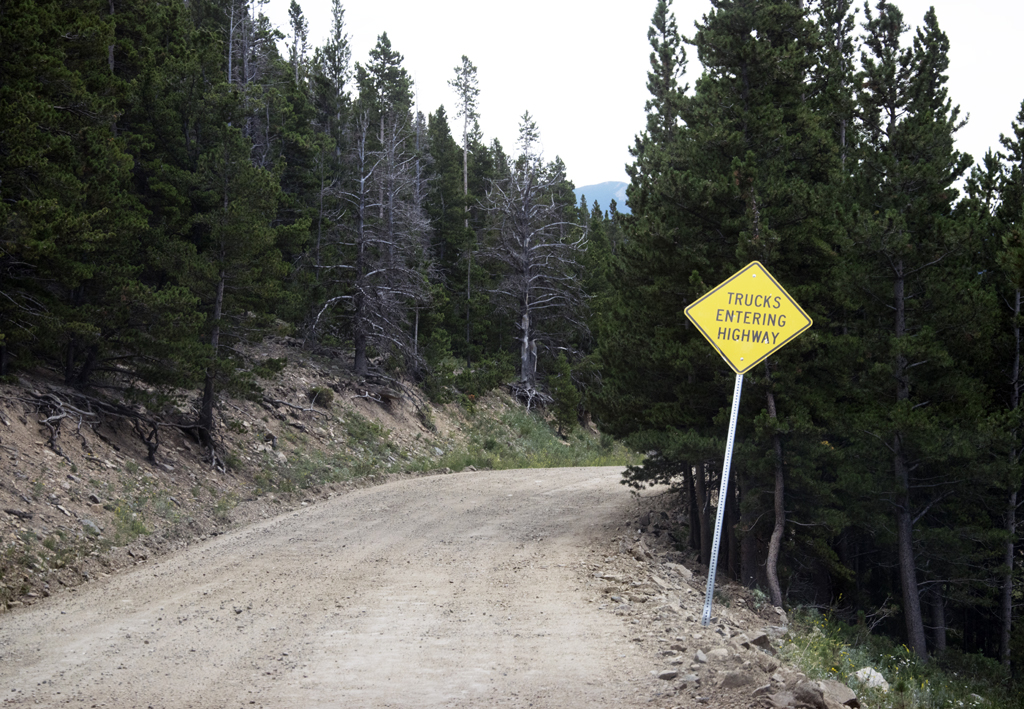 However, at five miles exactly, we rounded a curve and saw the ghost town ruins! 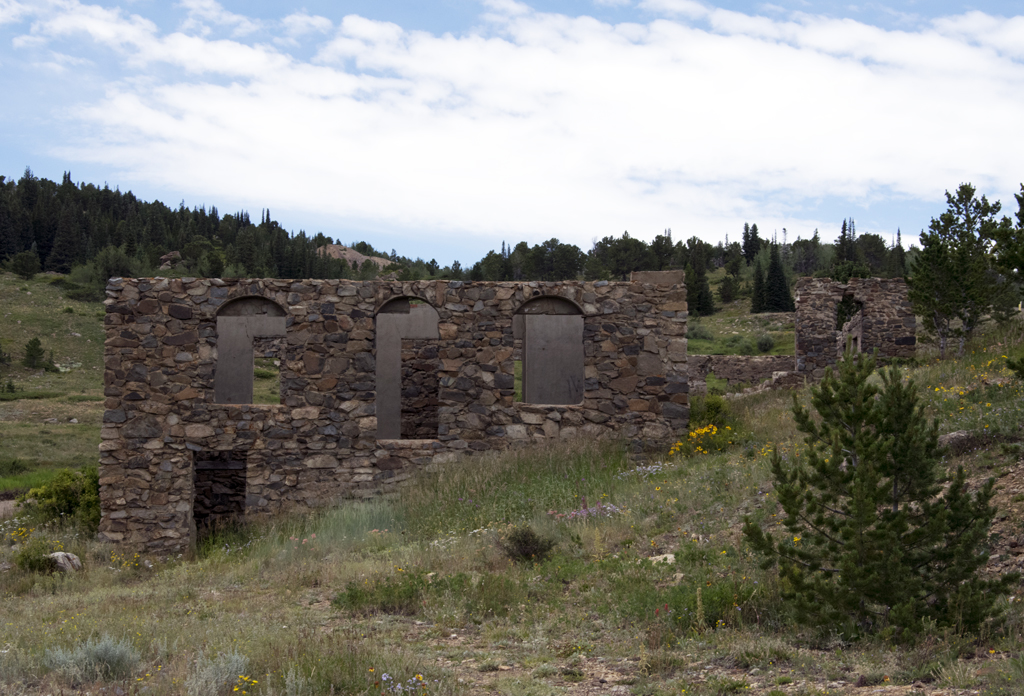 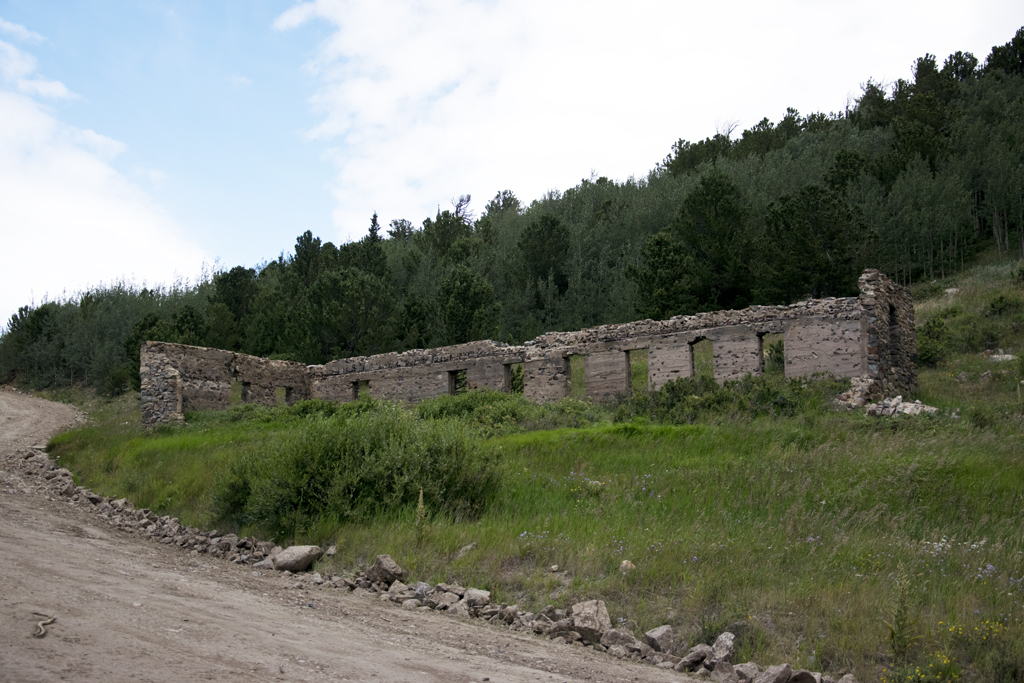 We continued up the hill to the top, where we saw some cars parked. Weird, since this was supposed to be an abandoned ghost town, right? But there we discovered a trailhead of the Caribou 4-Wheel-Drive trail! 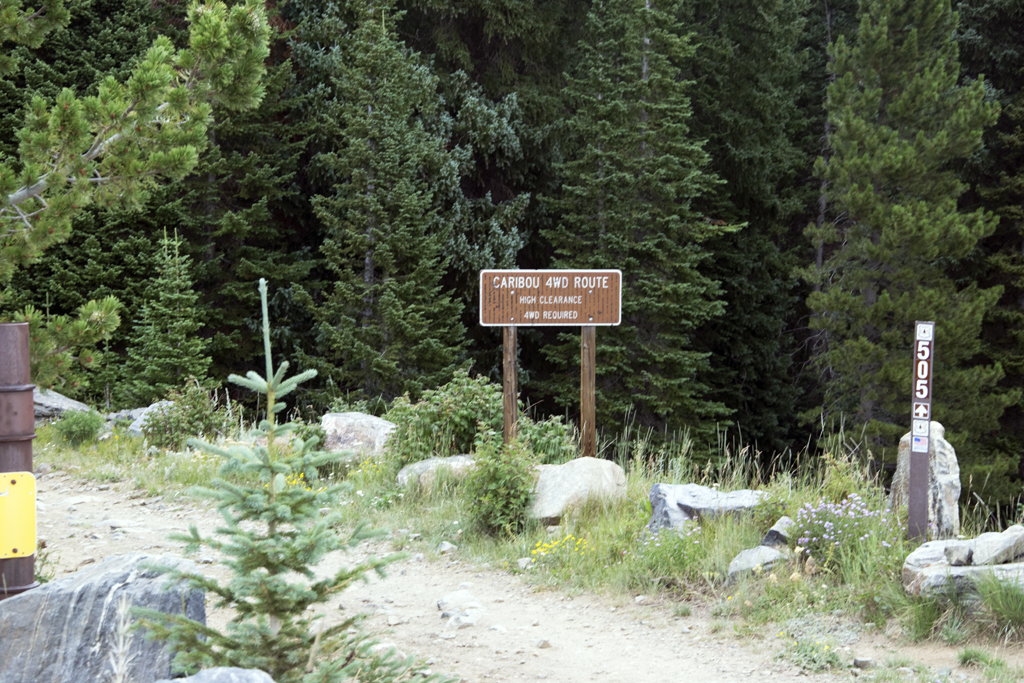 While up there, which is a little over 10,000 feet elevation, we discovered why the residents of the old ghost town used to call it “The Birthplace of Wind”. It was WINDY! I can’t stress this enough. Strong winds blow all the time and there was a continual sequence of dust devils in the parking lot. We were constantly bombarded by sand and dust. I can’t imagine braving this kind of weather all year round, silver mine or no silver mine. I’ve seen pictures of the town back in the day when it was active. They had to shore up the schoolhouse with poles on one side to keep the wind from blowing it over. And they tied a rope to the center of town and stretched it to the mine entrance so the miners could find their way home during winter blizzards. Wow.

I will say the people there, who were preparing to drive the 4WD trail or just finishing it, were having the greatest time! Everyone was breathlessly anticipating the trip or breathlessly describing it. We saw Jeeps, Subarus and some Honda SUVs as well. In fact, one car had started up the steep slope and was coming back down in reverse because another car was coming down in the opposite direction. Lots of camping gear was loaded into the vehicles – you can camp along the route. It looked fun, but we weren’t there for that just yet.

Here is the view from the trailhead back down toward the ghost town: 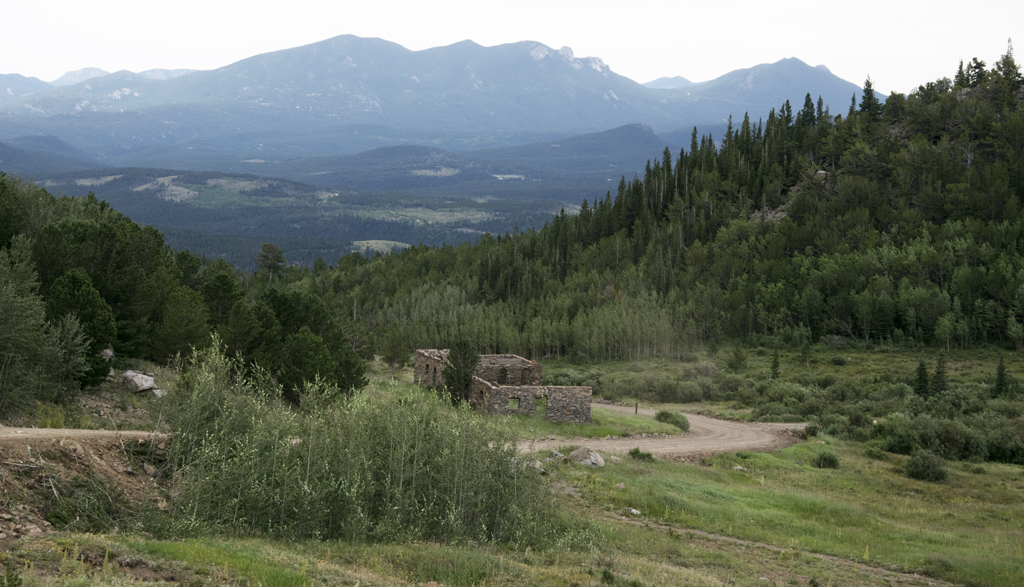 Hard to believe that there were 5,000 people living here during the boom time. Most of the buildings had been in the meadow on the right in the picture above.

Caribou was a silver mining town, established in the early 1870s. By 1875 it was at its peak. Lots of families lived there, and it was one of the “cleaner” mining towns because the local government did not allow brothels there. You had to walk down the mountain a ways for that.

The larger stone ruin used to be the boarding house, hotel, or miners’ barracks, depending on which website you believe. 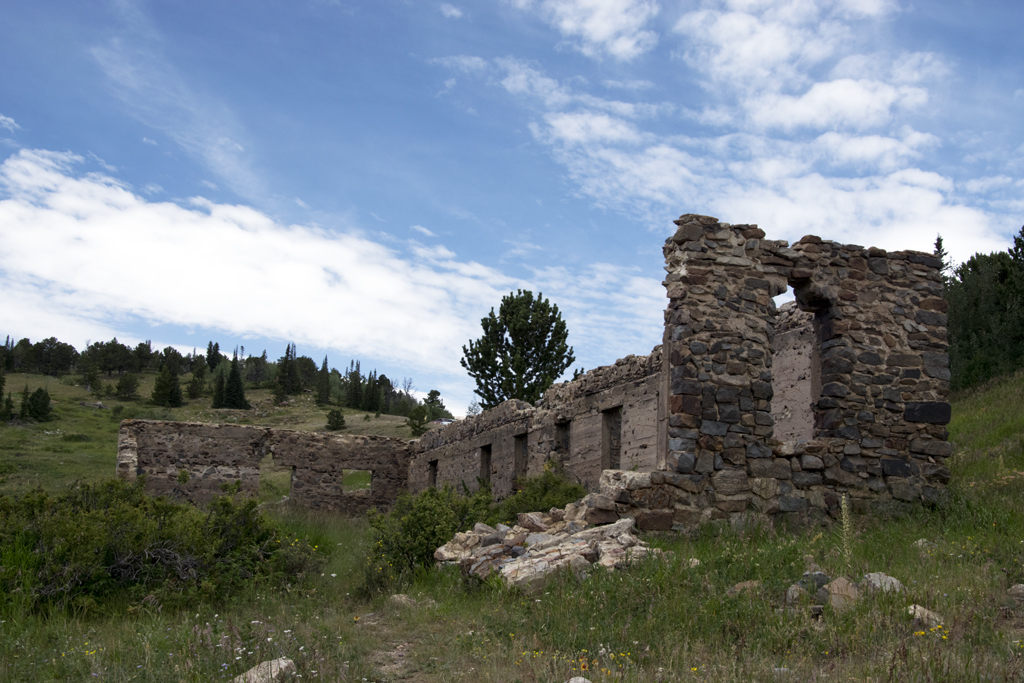 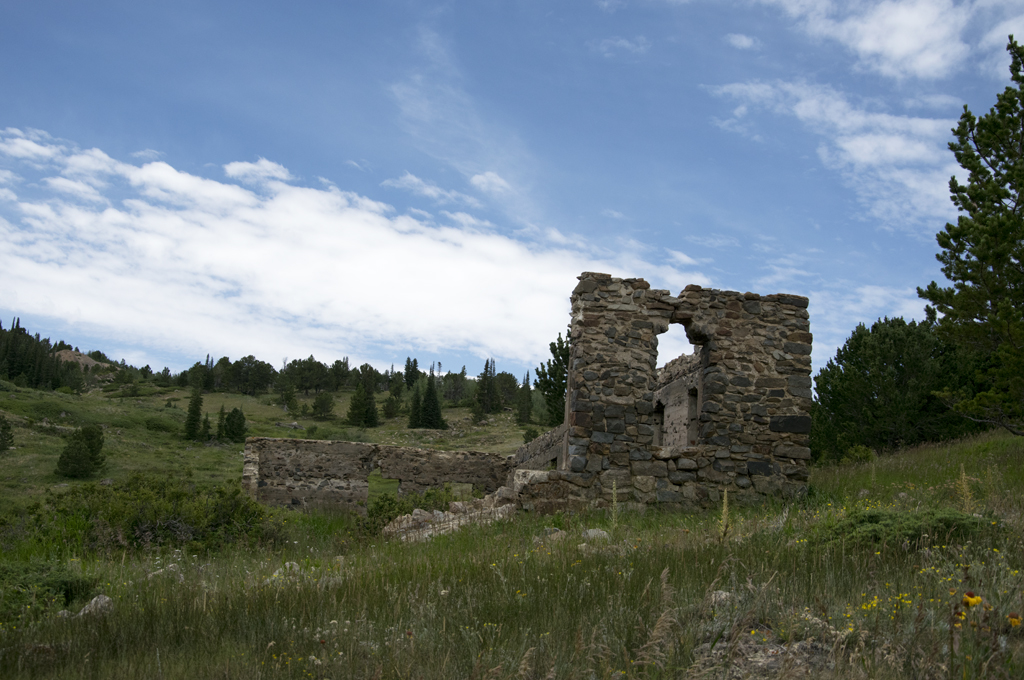 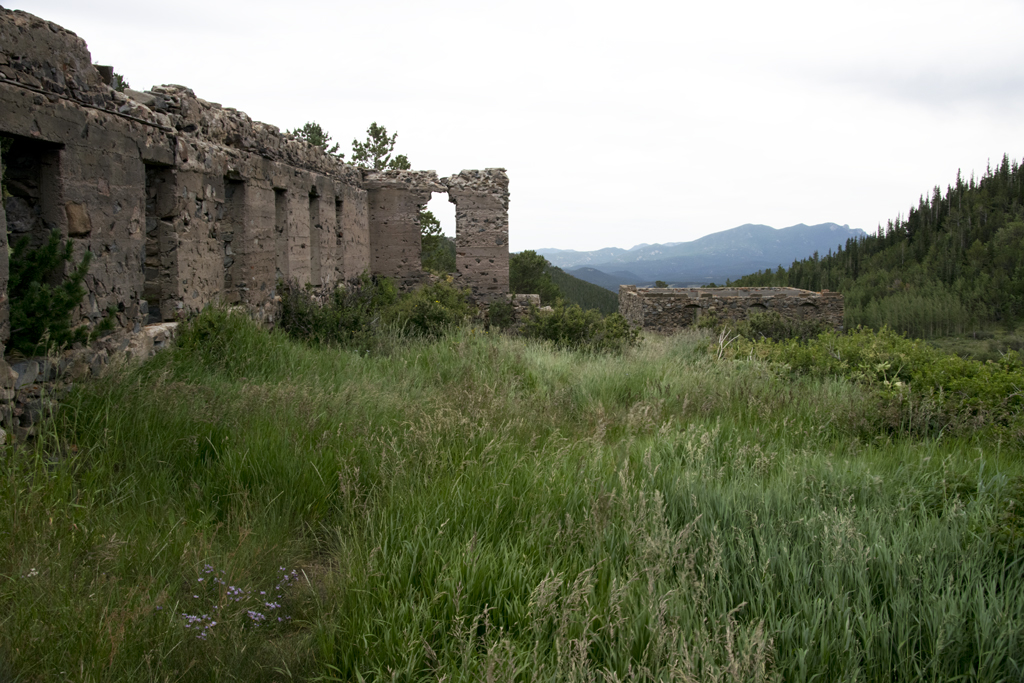 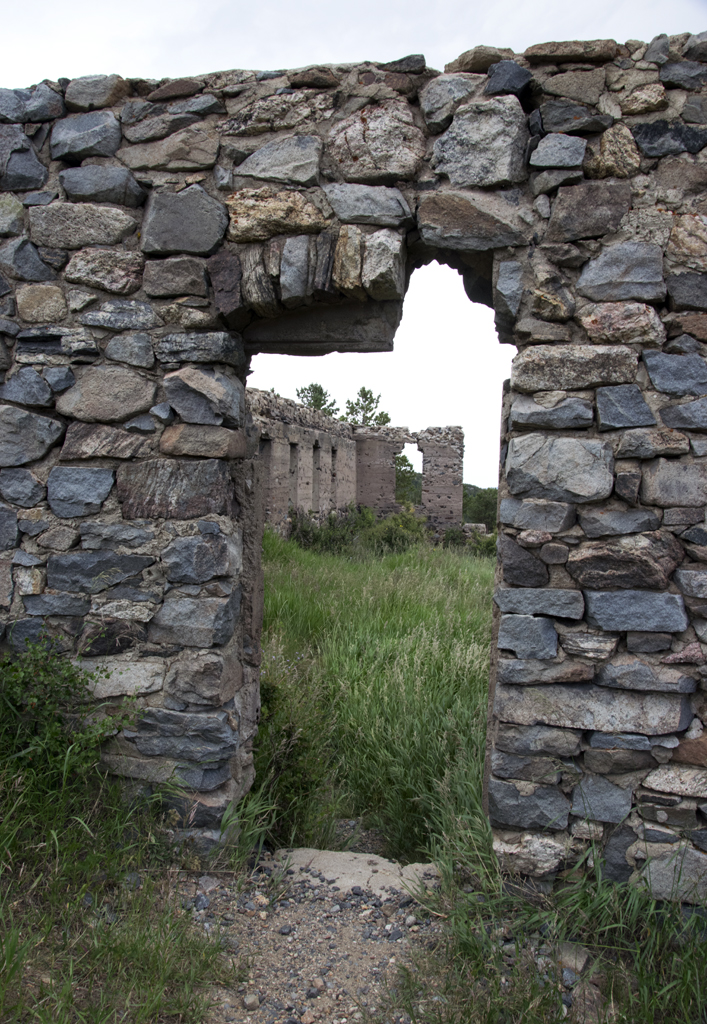 There is a picture of this building with its wooden roof in 1920, along with some other photos at the 4X4Explore website.

This next shot, through the window of the boarding house, shows the ruins of the assay office, just down the hill, where miners could take ore and minerals to be evaluated. No wonder it was built so sturdily. 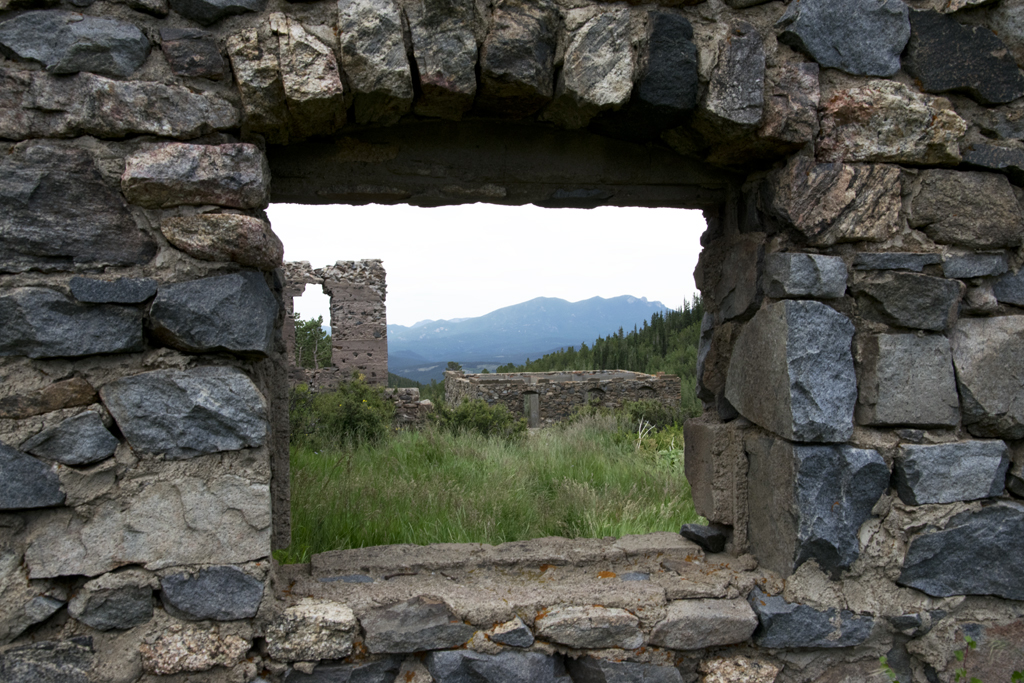 Here are more shots of the assay office ruins: 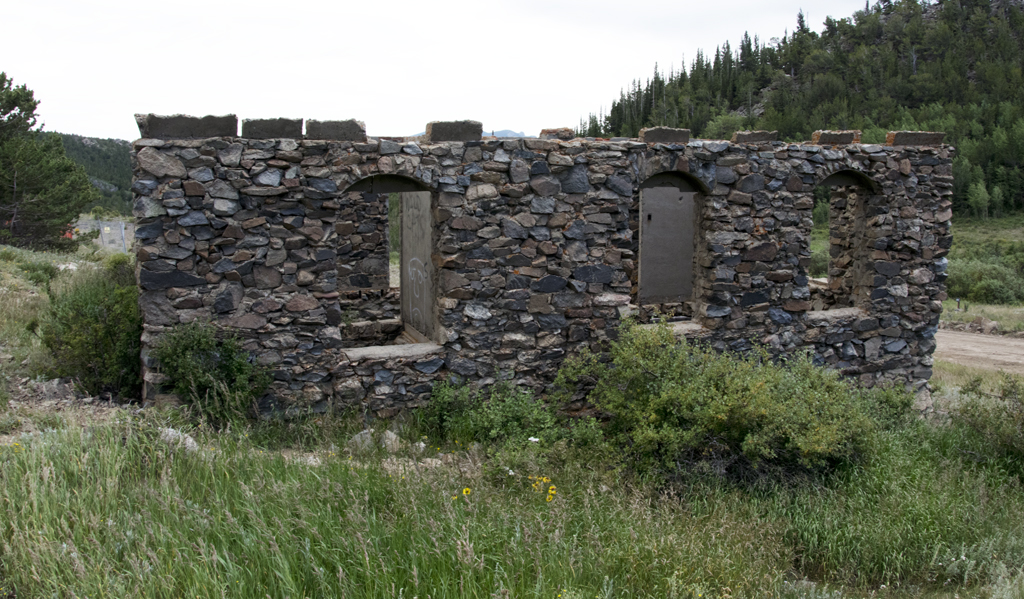 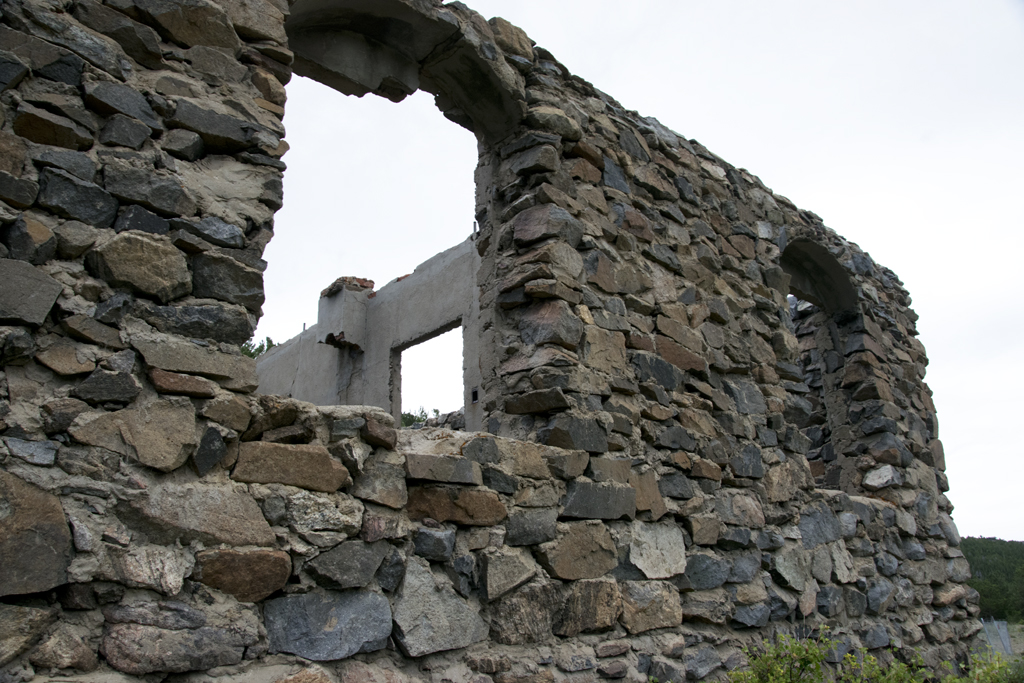 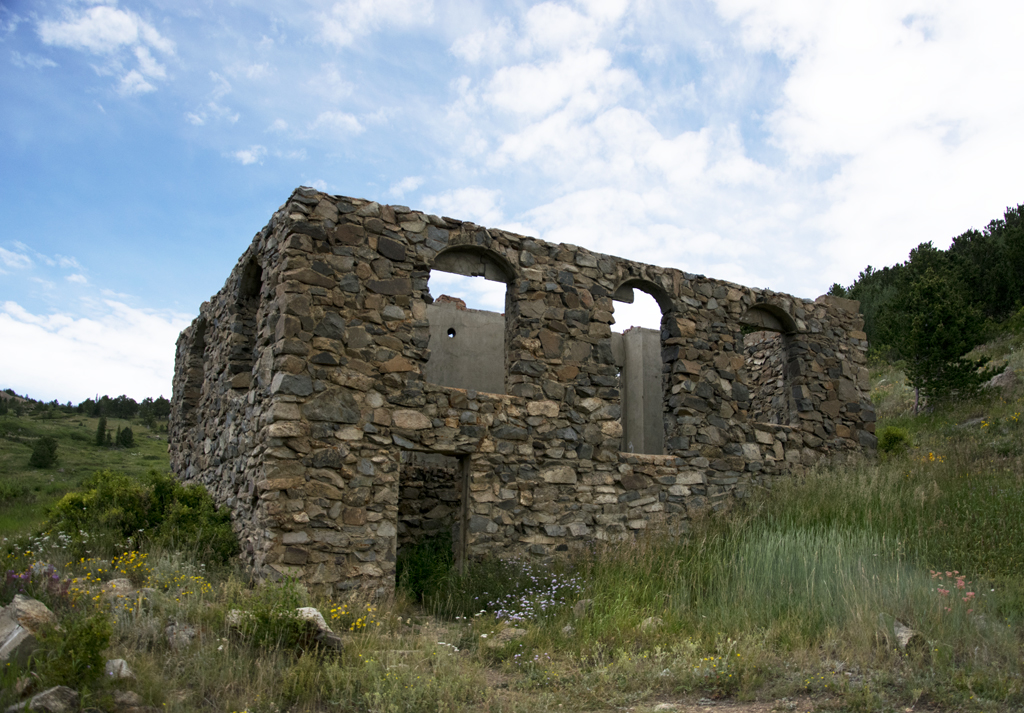 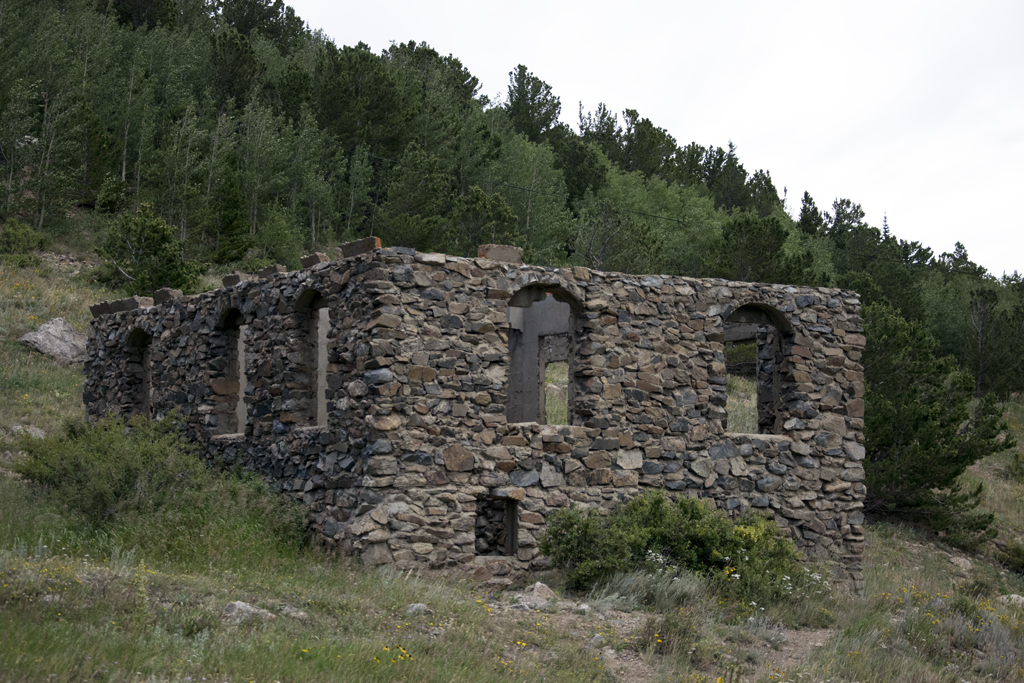 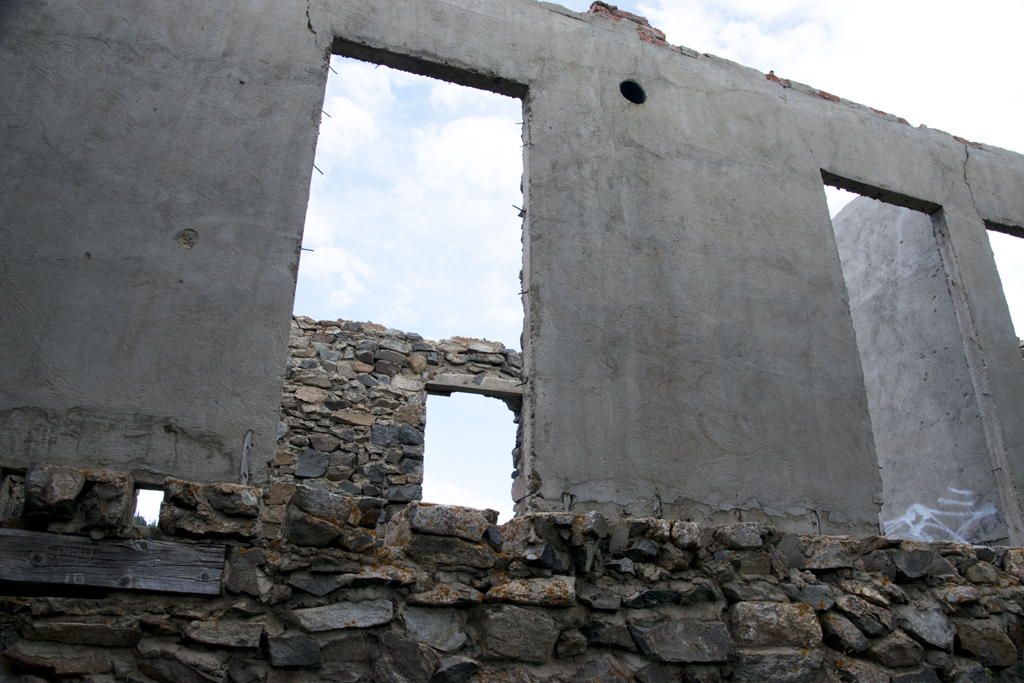 Just up the hill behind the assay office was the old Caribou mine entrance: 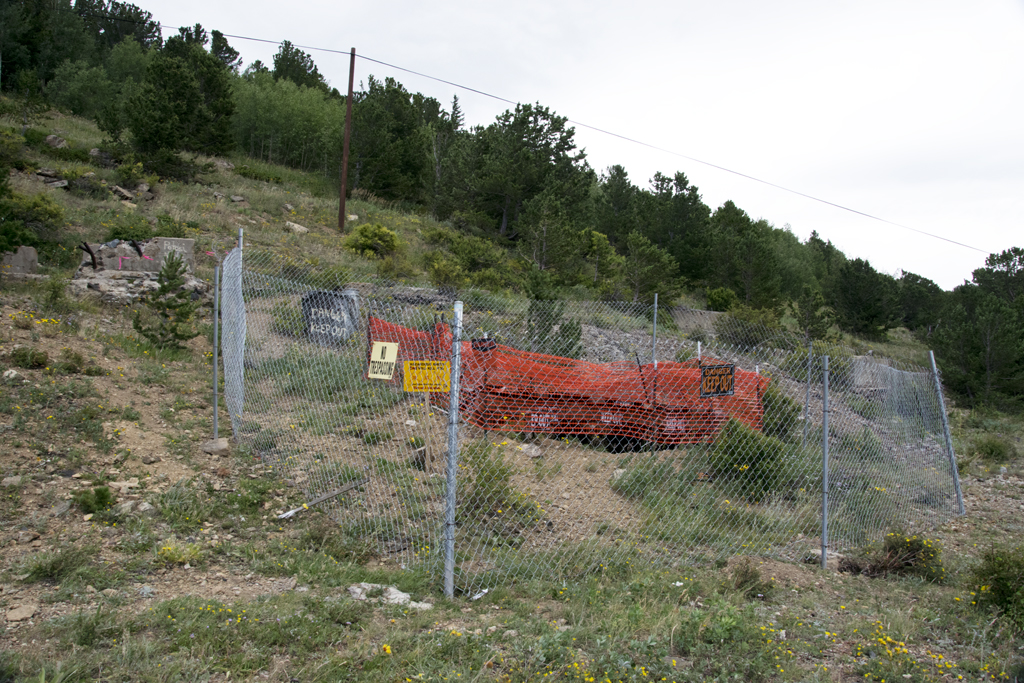 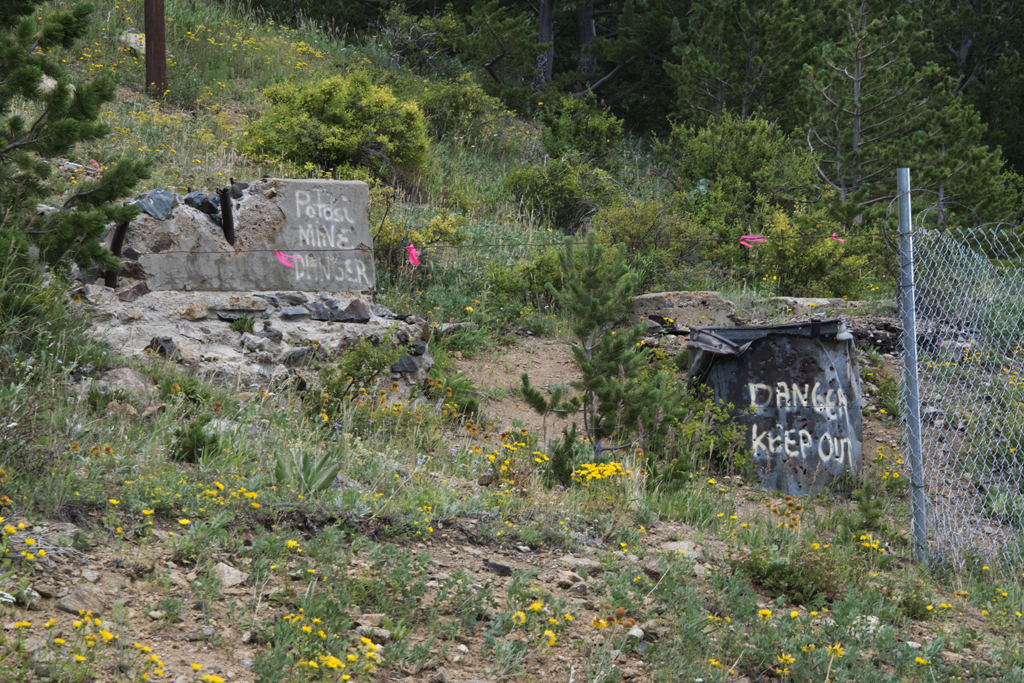 All I could think of was, “Lassie, Timmy is trapped in the old mine! Get help!”

The Caribou Mine closed in 1884, and a fire destroyed the town, which was mostly wooden structures, in 1903. It wasn’t the first fire in the town, but this time it was not rebuilt, and soon it was a ghost town. Up until the mid-1970s there was the remains of a wooden cabin and a cemetery in the area. None of that remains today, though; someone stole the tombstones years ago.

Despite the windy, harsh, overcast weather, I was taken by the beauty of all the wildflowers in full bloom that day! 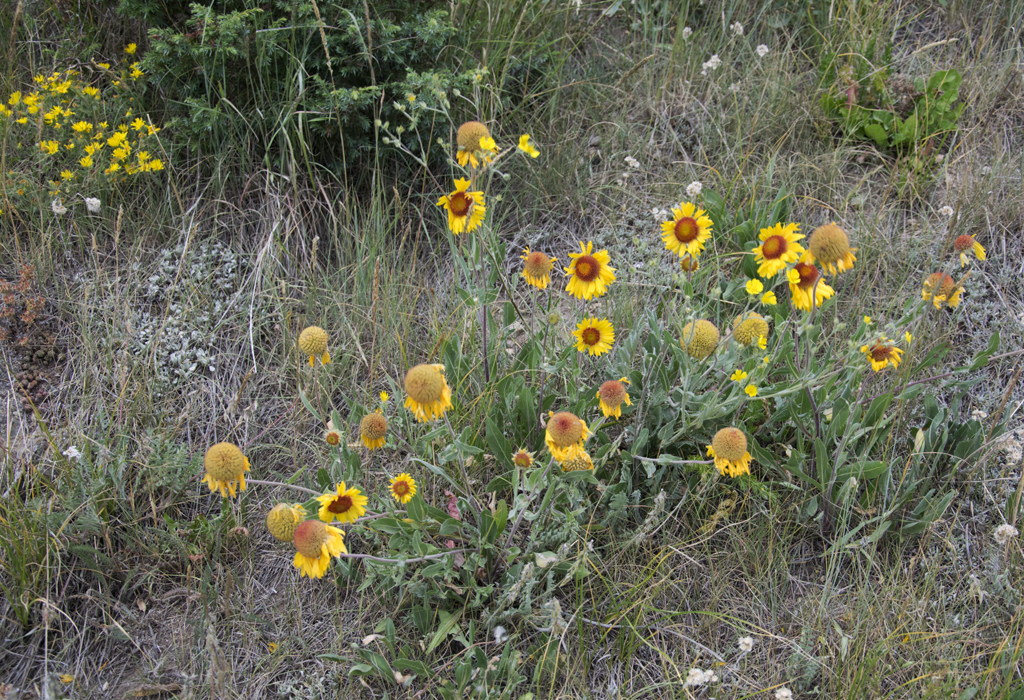 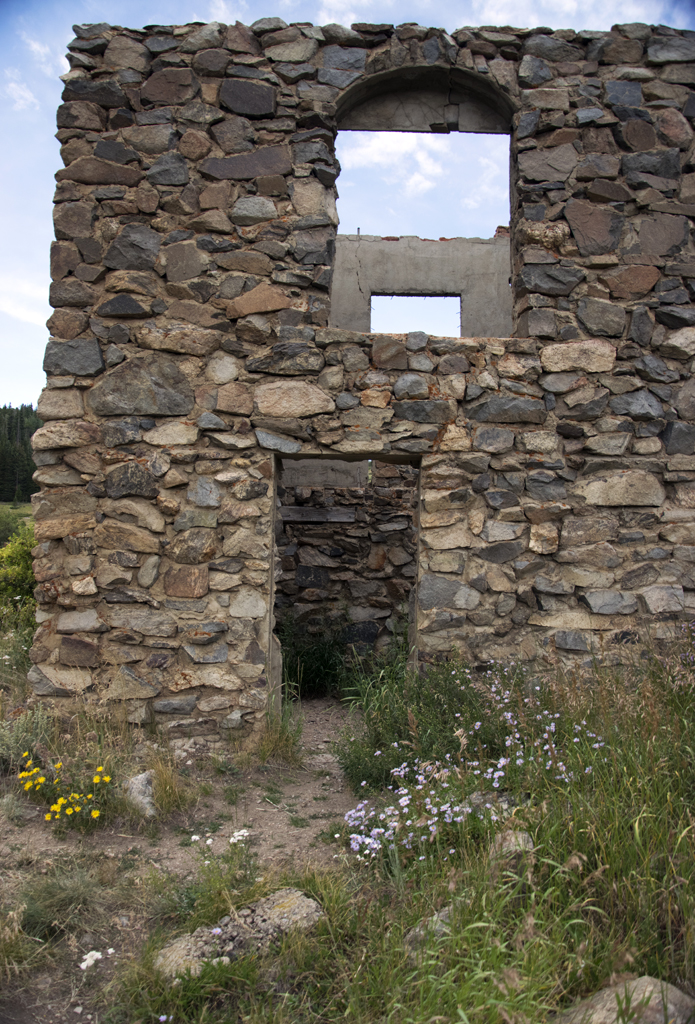 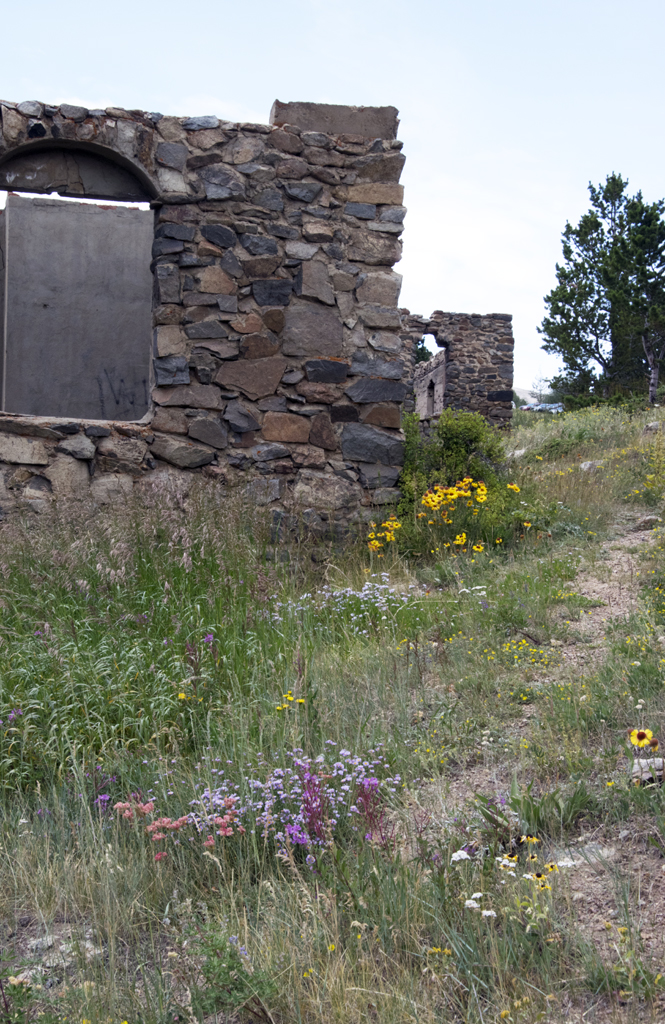 No, this isn’t marijuana. It’s a real weed: 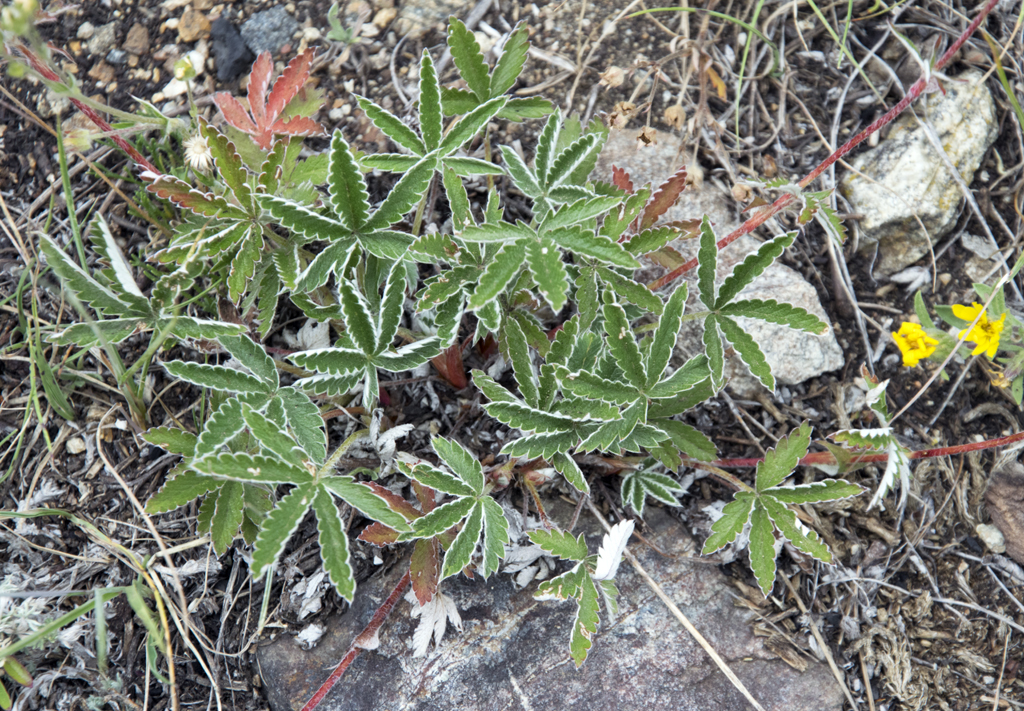 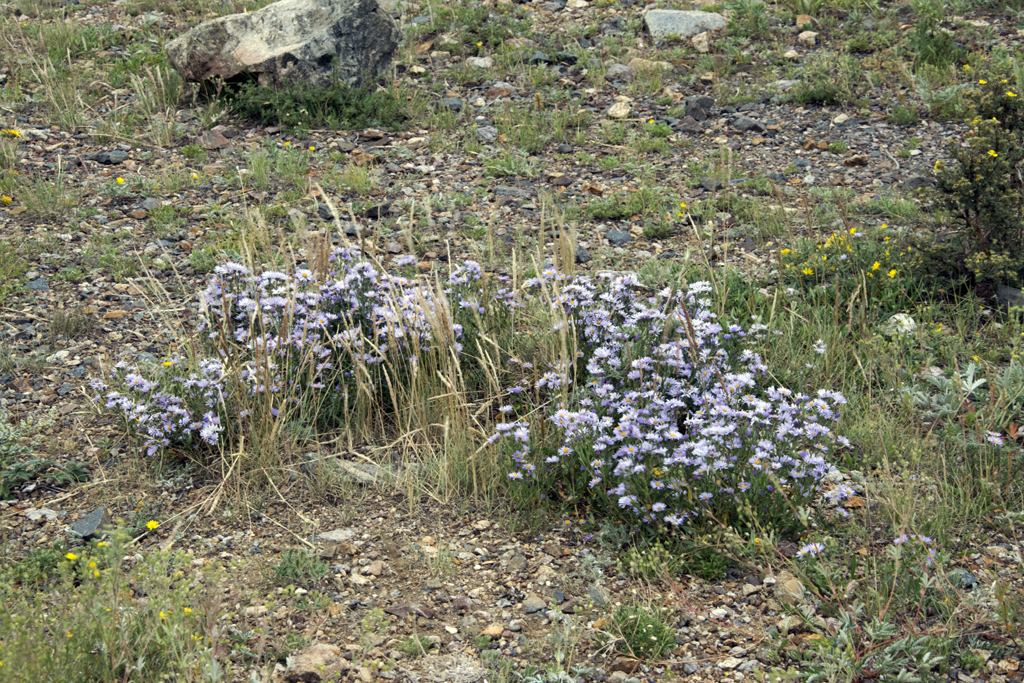 What an experience! There is always something more than you expect on an excursion like this in Colorado. In fact, on the way back home down Boulder Canyon Road, we were stopped by emergency vehicles in the narrowest part of the canyon. Someone told me they were rescuing a climber from the rock face. Indeed, we saw the stretcher being brought down by ropes while we waited. Here’s a shot of the two rescue teams (in blue with white hard hats) on the mountain: 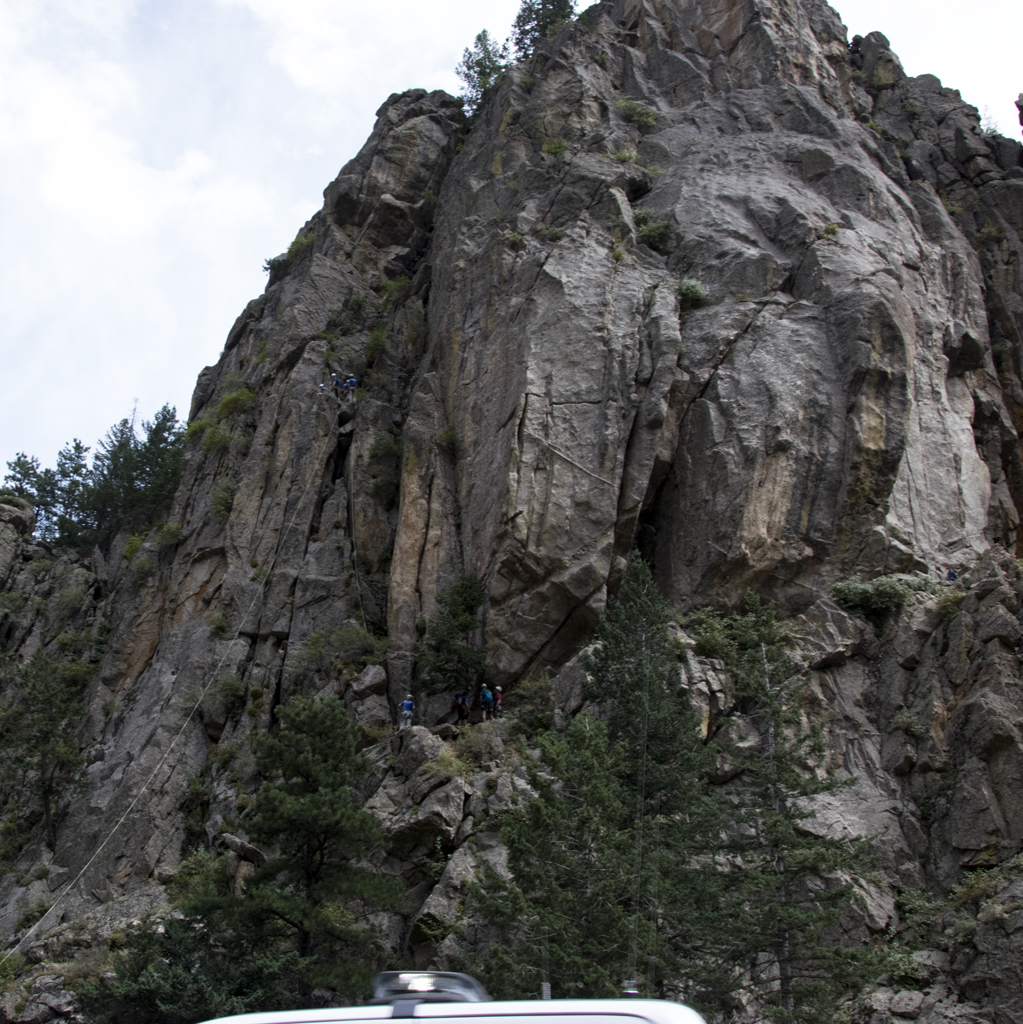 The next day I read that the climber had died in a fall from the top of the peak. The rocks had given way as he was standing on the edge trying to figure out the best route to get down after completing his climb. That’s Colorado. It can be a very unforgiving place, in addition to the marvelous wonders here. 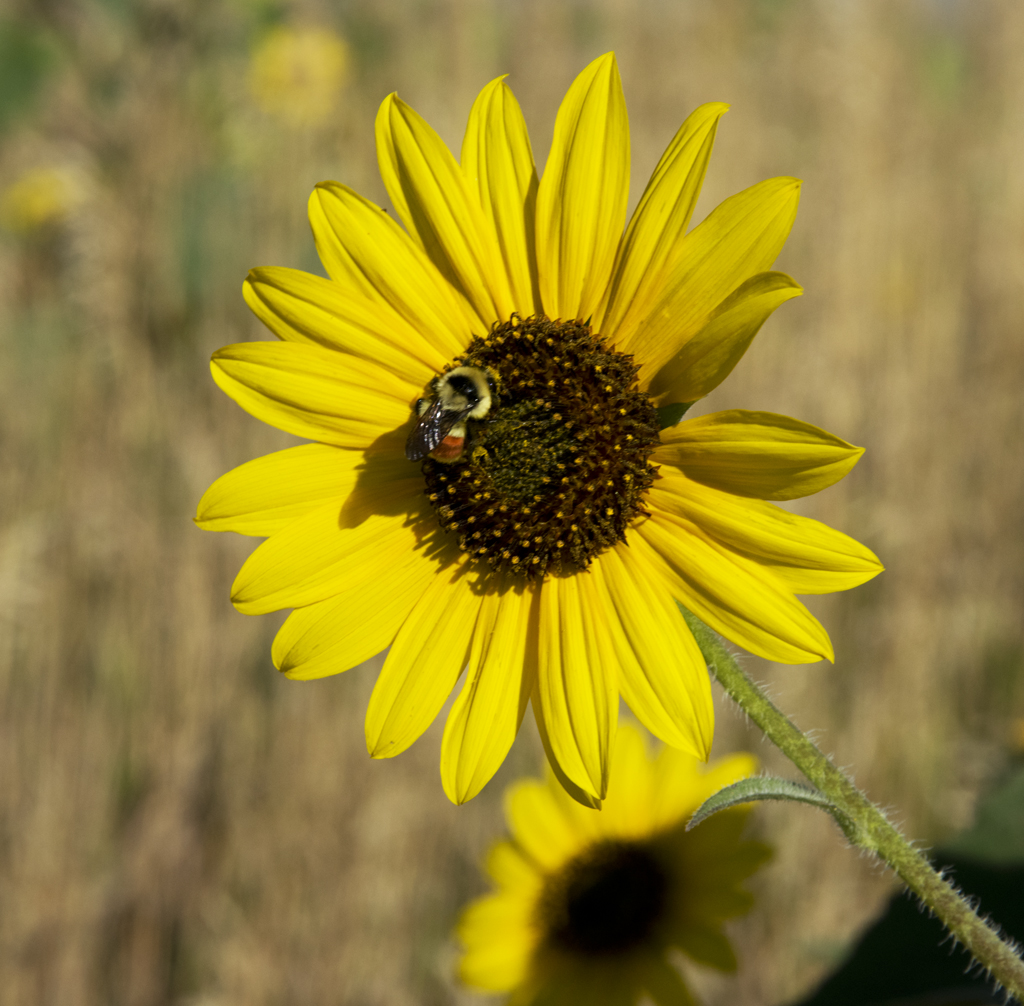 7 thoughts on “My Second Ghost Town: Caribou, Colorado, near Boulder”