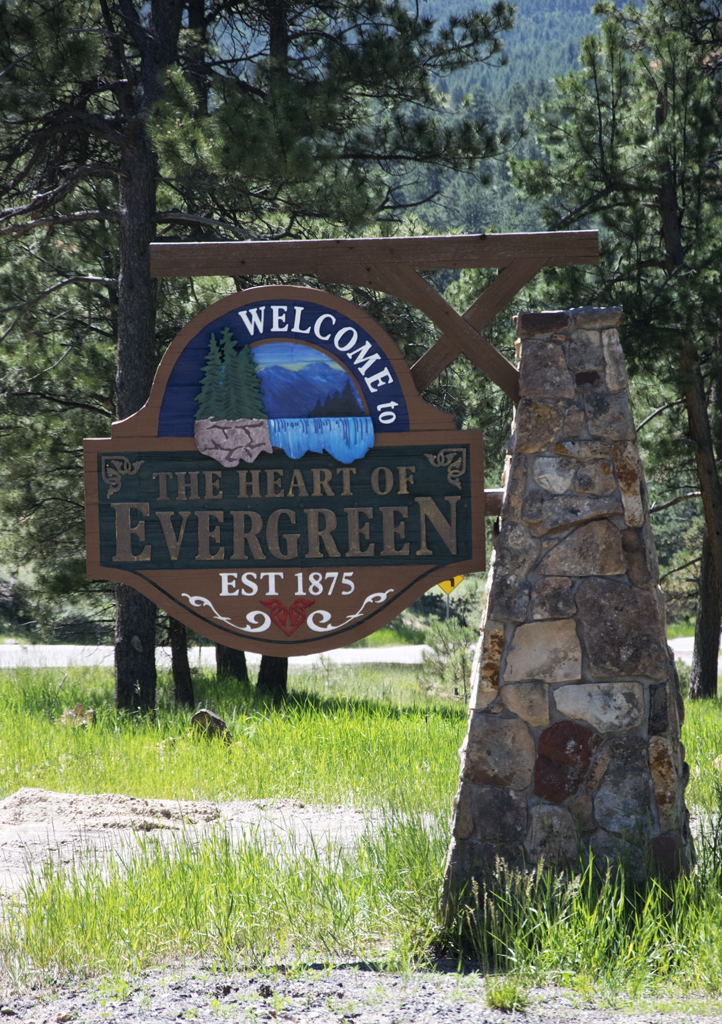 To be honest, I didn’t even have the small, small town of Evergreen, Colorado, on my list. However, I’m always up for an excursion, so when my friend Laura invited me along to see it, I was all in. It was part of her exploration of the Lariat Loop Scenic Byway, which I’ll post about in the near future, too.

Evergreen is a wide spot in State Highway 74. Ok, so it’s actually 11.6 acres, but I only saw the wide-spot part. 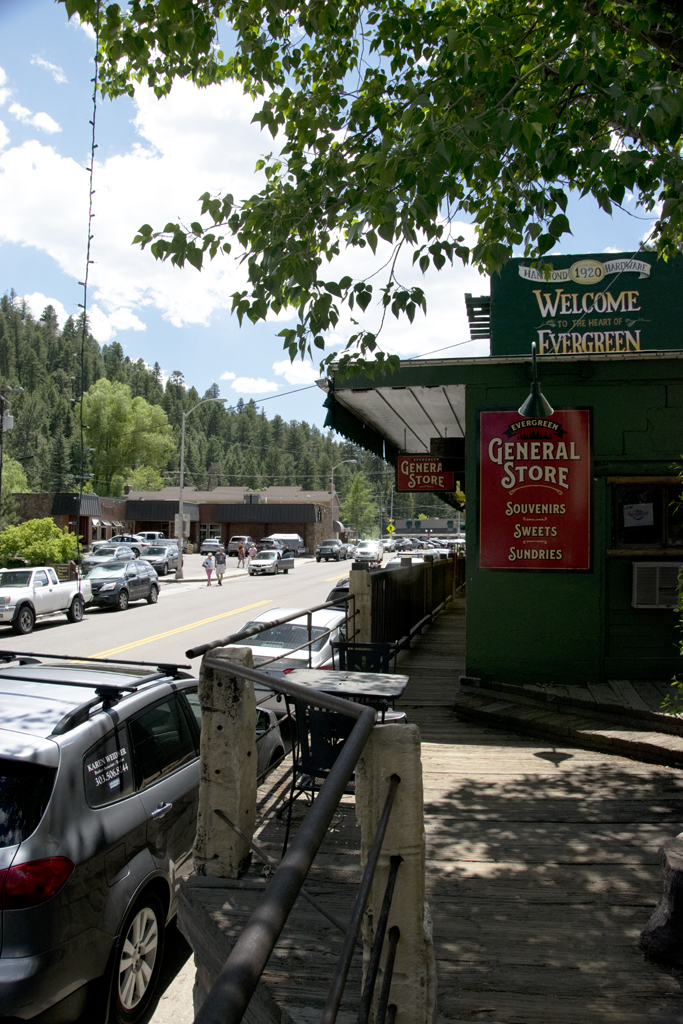 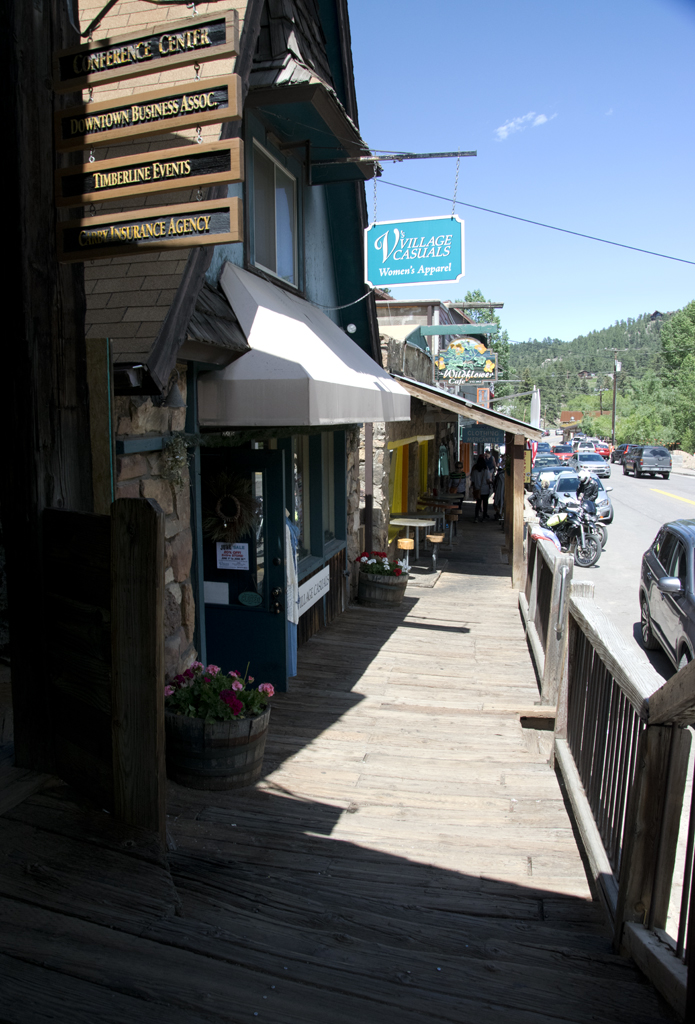 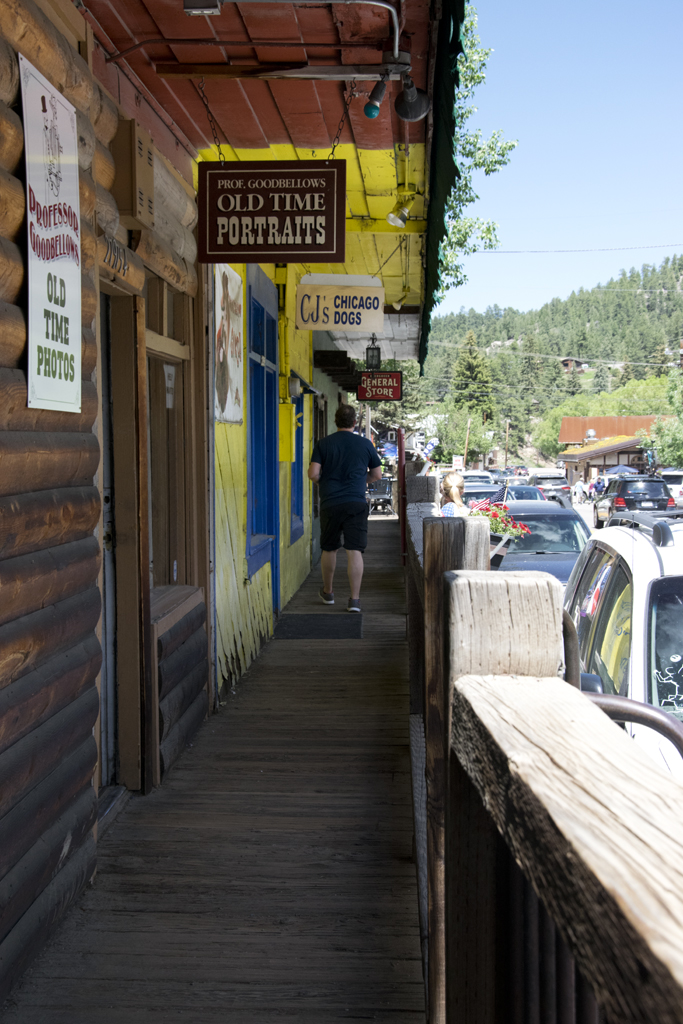 There are about 10,000 residents at its elevation of 7,220 feet. It’s only 29 miles west of Denver, and I think people come here to have a mountain experience. Lots of small towns like this in the mountains began as mining towns, but Evergreen is different. The first white guy to develop the land homesteaded in 1878 – there was a lot of lumber to be had and Denver needed it. He and others after him continued logging and ranching through the years. Now it’s a touristy little spot, but it’s an established town as well.

As you can see, there are lots of old buildings along the main drag, including the boardwalk: 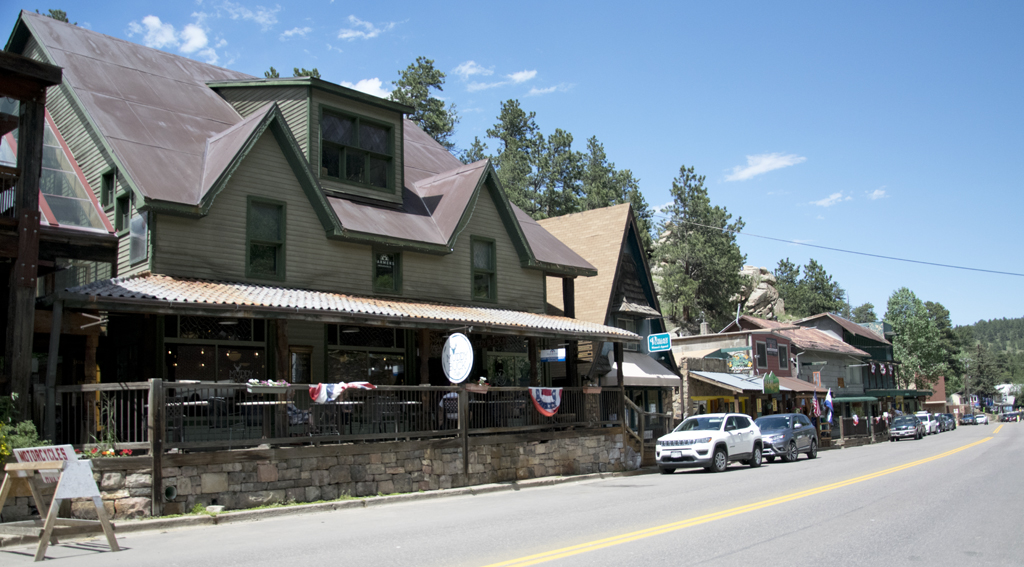 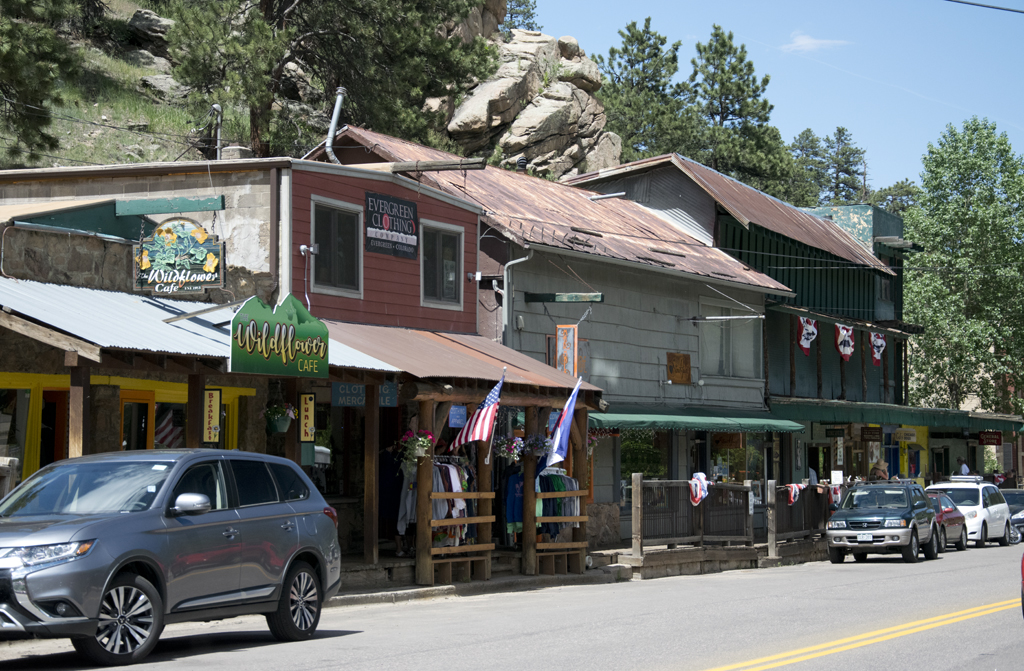 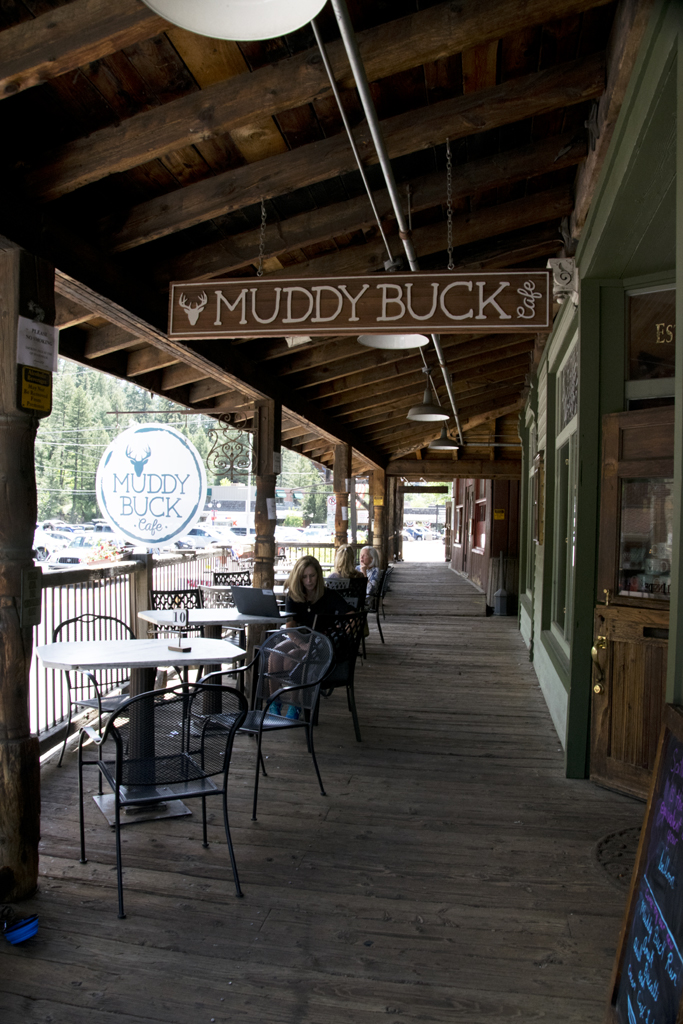 We enjoyed seeing the live roof on a local scarfing establishment: 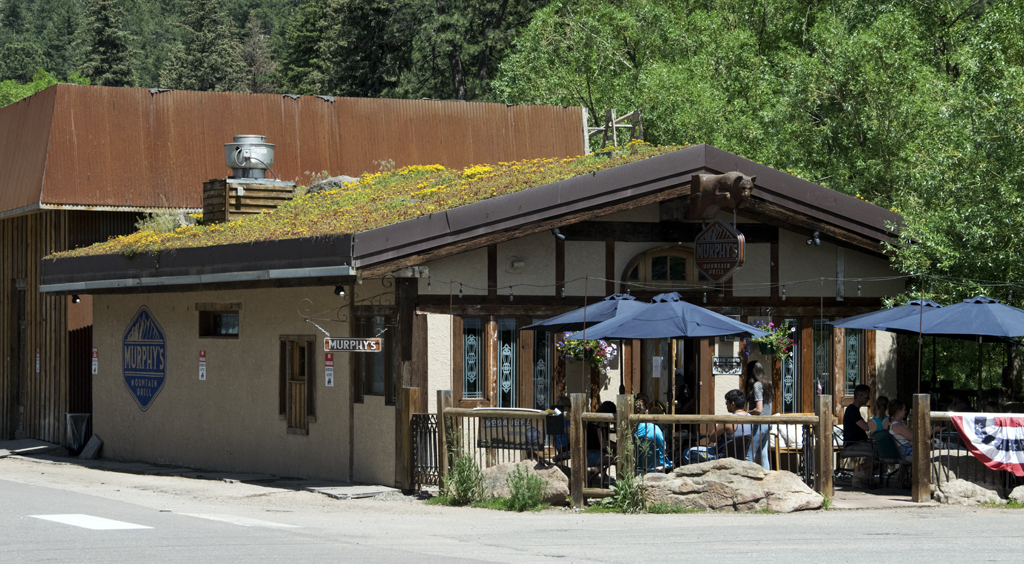 And the forested bank: 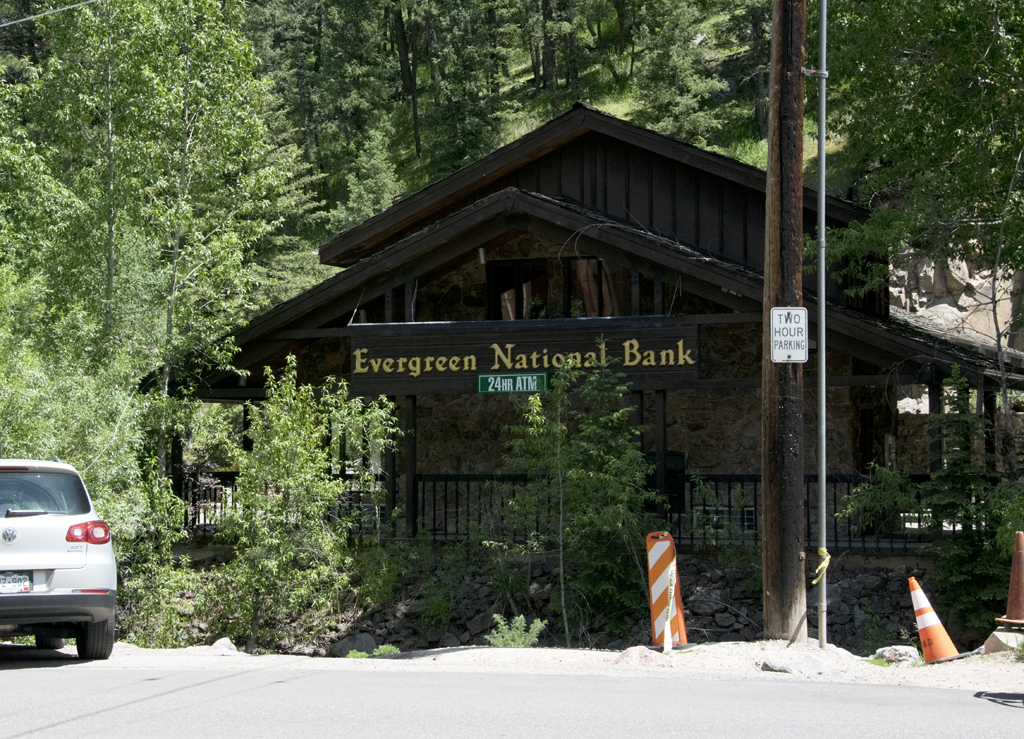 Several pieces of public art, with a self-guided tour option via mobile phone: 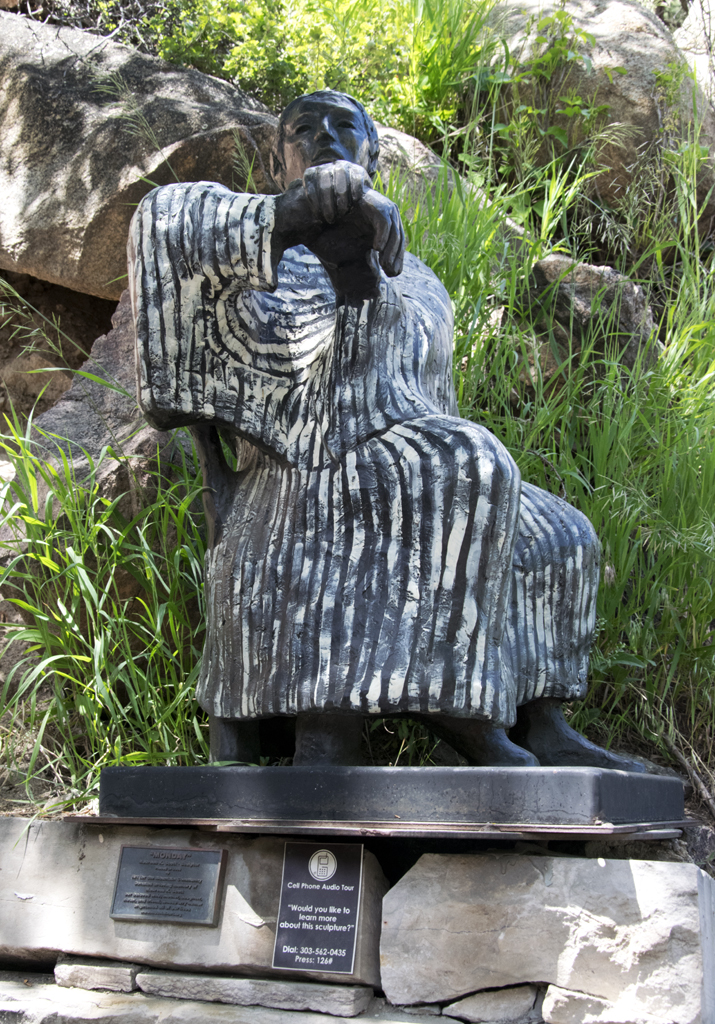 And even some aliens: 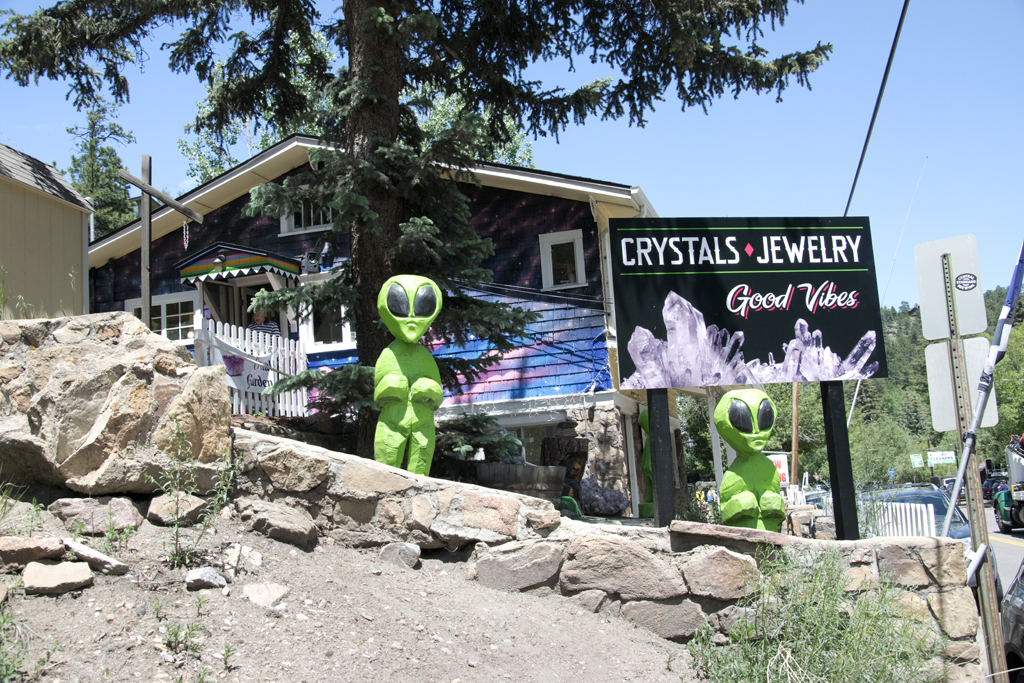 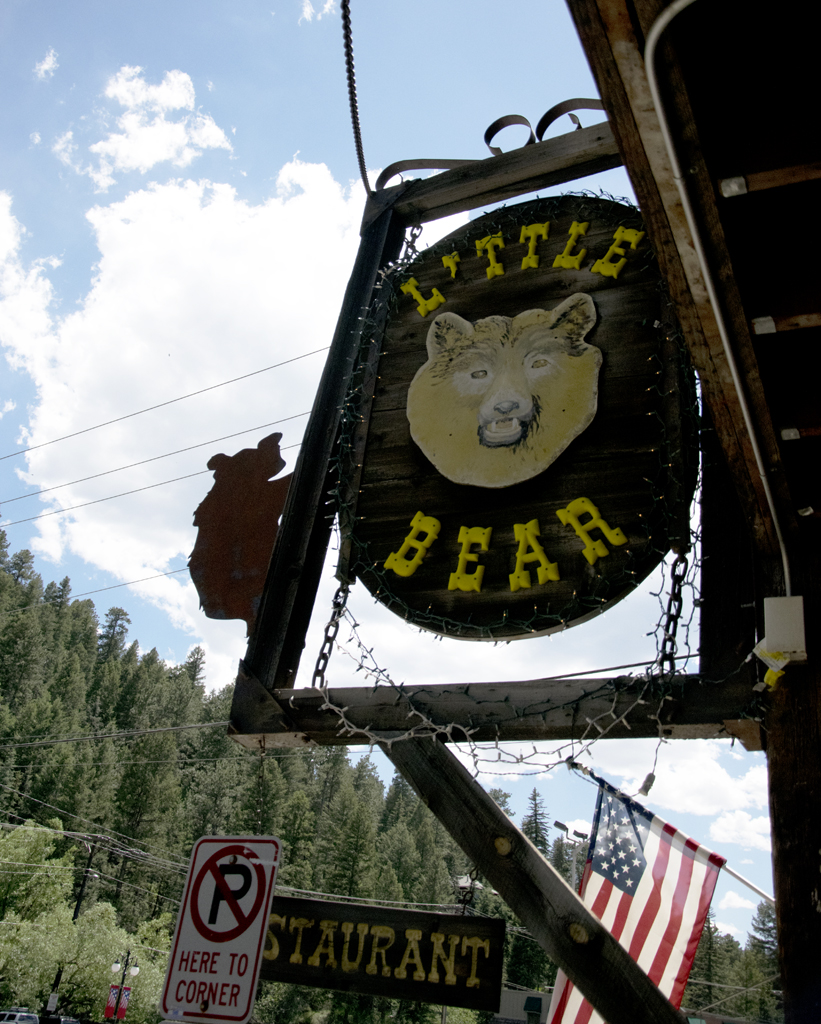 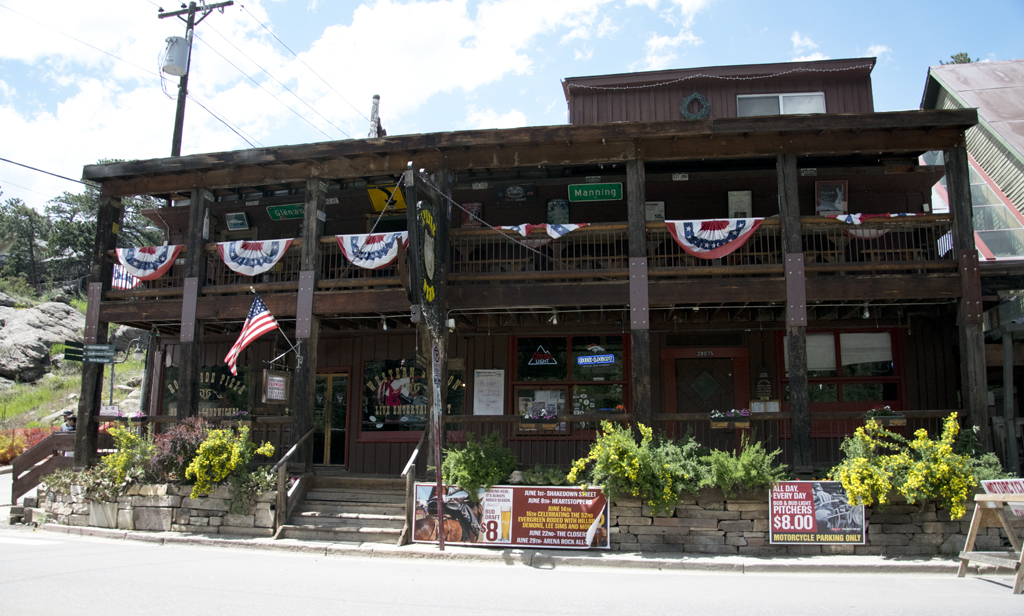 Evergreen’s Chamber of Commerce website sums up its history much better than I could:

The legendary Little Bear Saloon, complete with swinging saloon doors, wooden bar stools and brass registers, has provided live entertainment in historic downtown Evergreen for 40 years. it is hard to believe the rowdy establishment’s original core building was once St. Mark’s in the Wilderness Episcopal Church.

That church, built in 1875, was moved to its present Main Street location in the 1890s. during its time as Prince Mccracken’s Drug Store and Round-Up dance Hall (with auto parts), it is said to have been a prosperous venue for bootleggers who during Prohibition years sold their wares out back. Ross Grimes purchased the estate trust-controlled property in 1964. its former church designation allowed the business owner to take advantage of an exemption from alcohol regulation, and Ross says it soon became, “…  the only bar in town.” during the 1960s when it transformed into the Red Ram (sign still visible on the Little Bear’s Roof) it hosted amazing musical greats like Duke Ellington, Count Basie and members of Glenn Miller’s band. 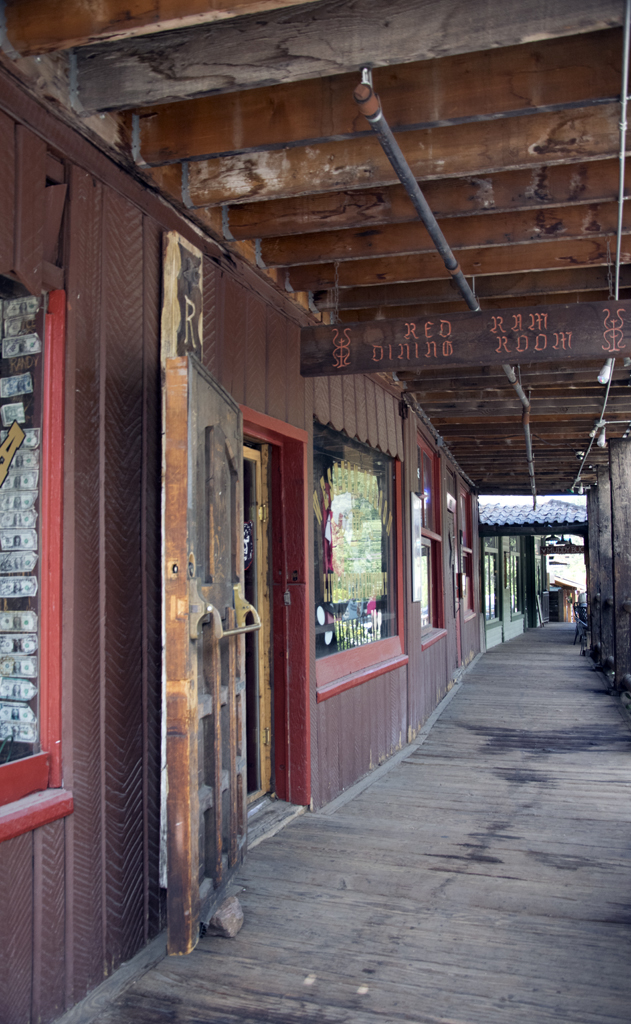 If you can believe Wikipedia, Evergreen has had several famous residents, including Willie Nelson, who owned a ranch nearby. Trey Parker of South Park fame went to high school there, as well as astronaut Jeffrey Ashby. Several authors have lived there, as well as Olympic skater Scott Hamilton and John Hinckley, Jr., who shot President Reagan. These are just a few personalities from the list of notable Evergreenians. I guess the lesson is, “Don’t drink the water.” Or, “Be sure to drink the water,” depending on your personal goals.

Evergreen was a pleasant diversion that day, and I even managed to find a pin in one of the several souvenir shops to add to my collection. In addition to the town, we visited the Hiwan Heritage Park and Homestead Museum and the Evergreen Memorial Gardens (I couldn’t pass up a cemetery with yaks!). You’ll see a post about that very soon! 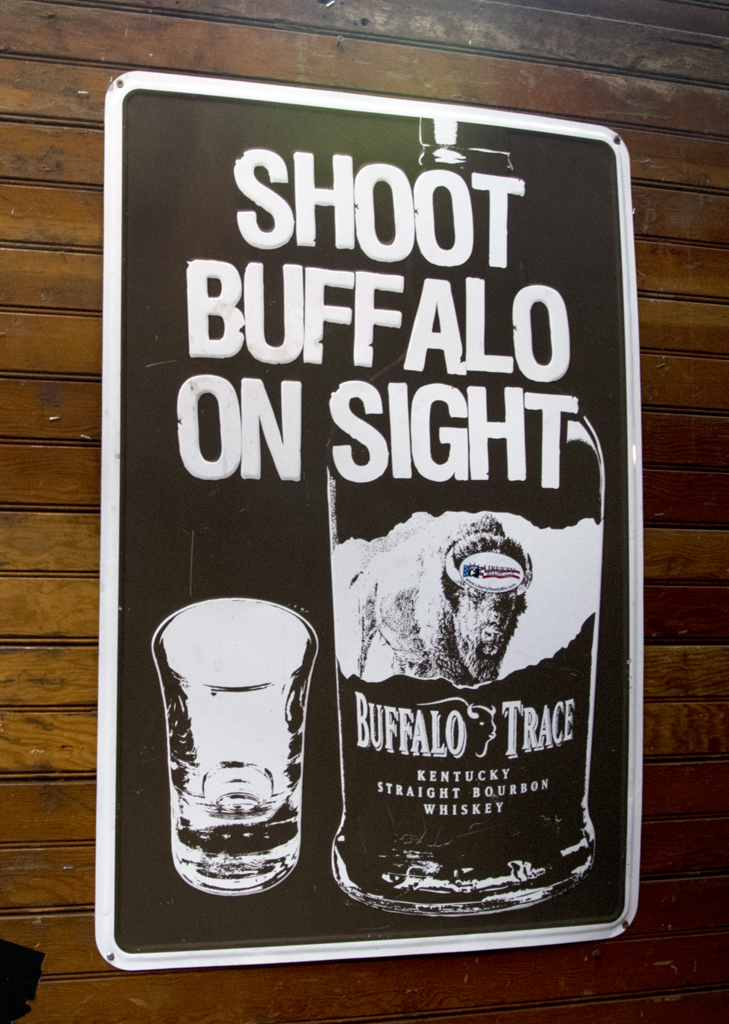