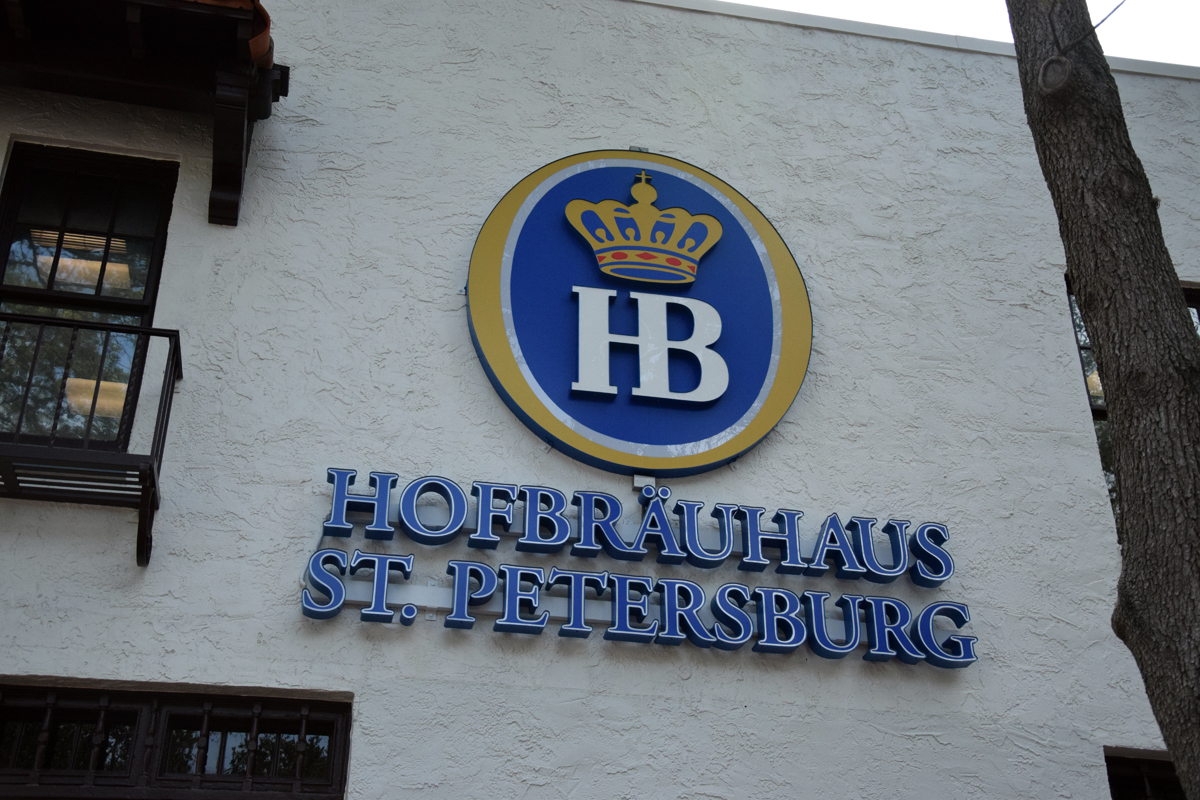 As part of my English-language learning podcast, Slow American English, I produce annual workbooks that contain all worksheets for each year, four in all so far.

If you know someone who could use some help learning English as a Second Language (or third or fourth), click below and buy them one or more of the workbooks on Amazon.

Must’ve been the post I wrote last week on German beer radishes, but I got such a taste for German beer! Hanging out in Florida usually doesn’t yield me an opportunity to get any of that, but fortunately my husband discovered the opening of the new Hofbräuhaus in St. Petersburg, about an hour’s drive from here.

The original Hofbräuhaus in Munich was founded in 1592 by order of the Duke of Bavaria. The name of the brewery tells you it was for royals: Hof in German means, in this case, “royal court”; Bräuhaus means “brew-house” or “brewery”.

By the way, the pronunciation is Hof with a long “o” sound as in “hope” and Bräuhaus pronounced to rhyme with “boy-house”.

My FB friends were asking about how authentic the Florida location was compared to Munich’s revered institution, so I promised this comparative post. Bottom line: the St. Pete location has an authentic feel and the beer is definitely the real deal. I’d recommend a visit, for sure.

For those of you who want more info, let’s start with appearances. The Munich (MUC) building is MUCH larger, as in: 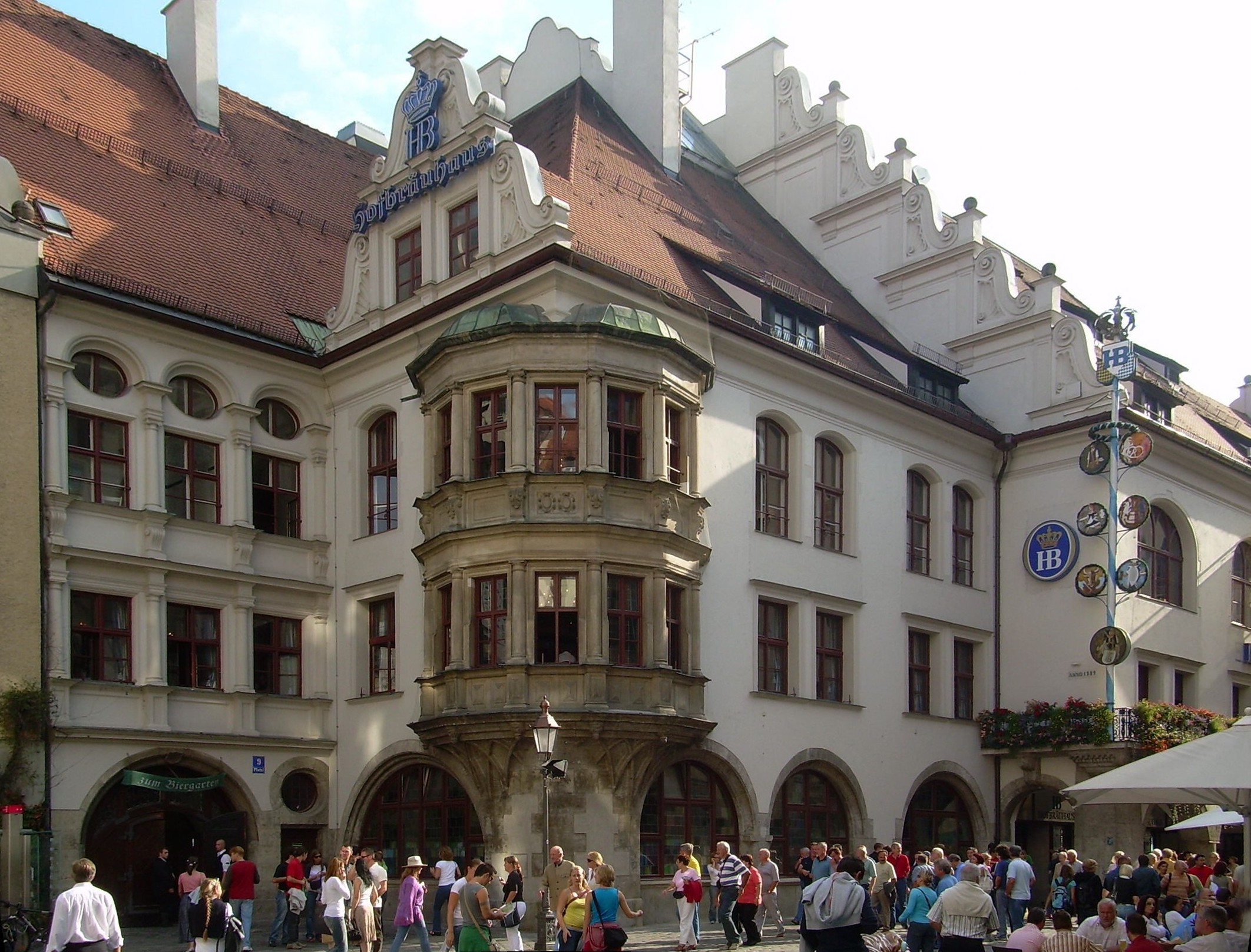 A little history: the brewery served only the royal court until 1828 when a restaurant was opened to the public at the current location. In 1896, to accommodate the large crowds, the brewery operations moved off site and the restaurant remained. The building itself was renovated the next year to further accommodate the hoards. It was almost completely bombed out in WWII, so it was rebuilt in the same style in 1945. For the most part, that’s what you’ll see today (oh, just makes me want to go there!).

The St. Pete (SP) site is about one-fifth the size (I’m guessing here), but it has the requisite Maibaum and everything: 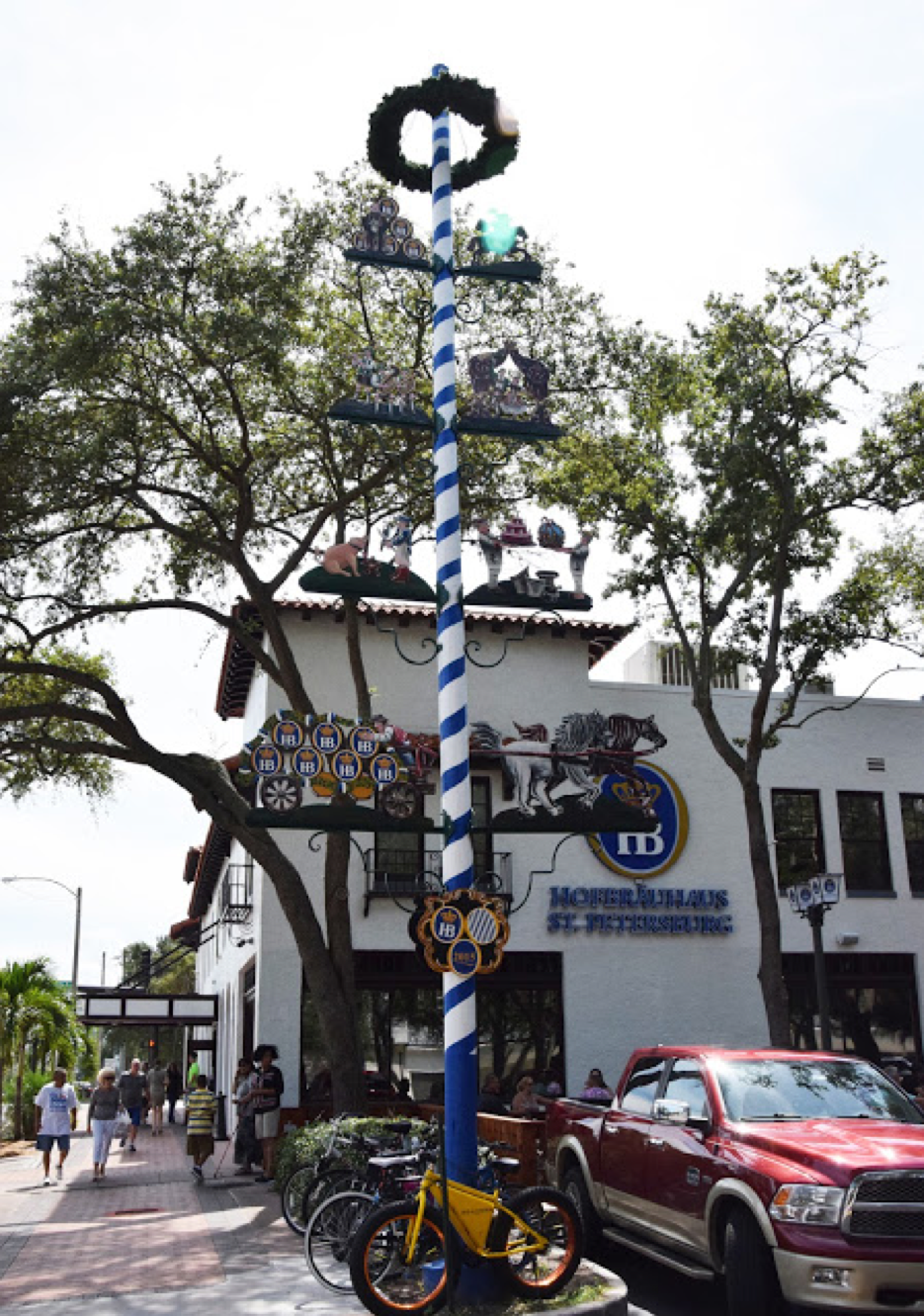 MUC inside (this is maybe about 10% of the indoor space on the ground floor); it’s enormous: 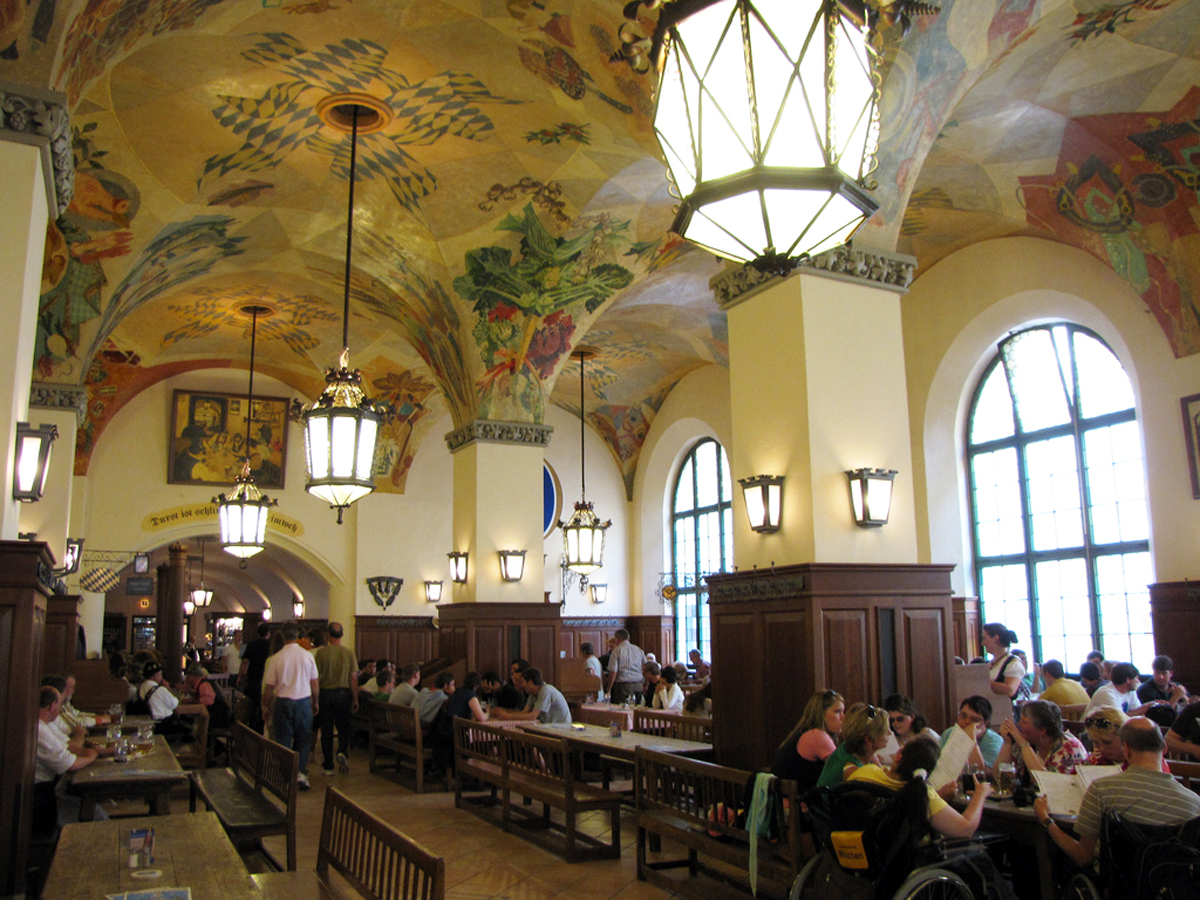 SP inside (this is the entire place): 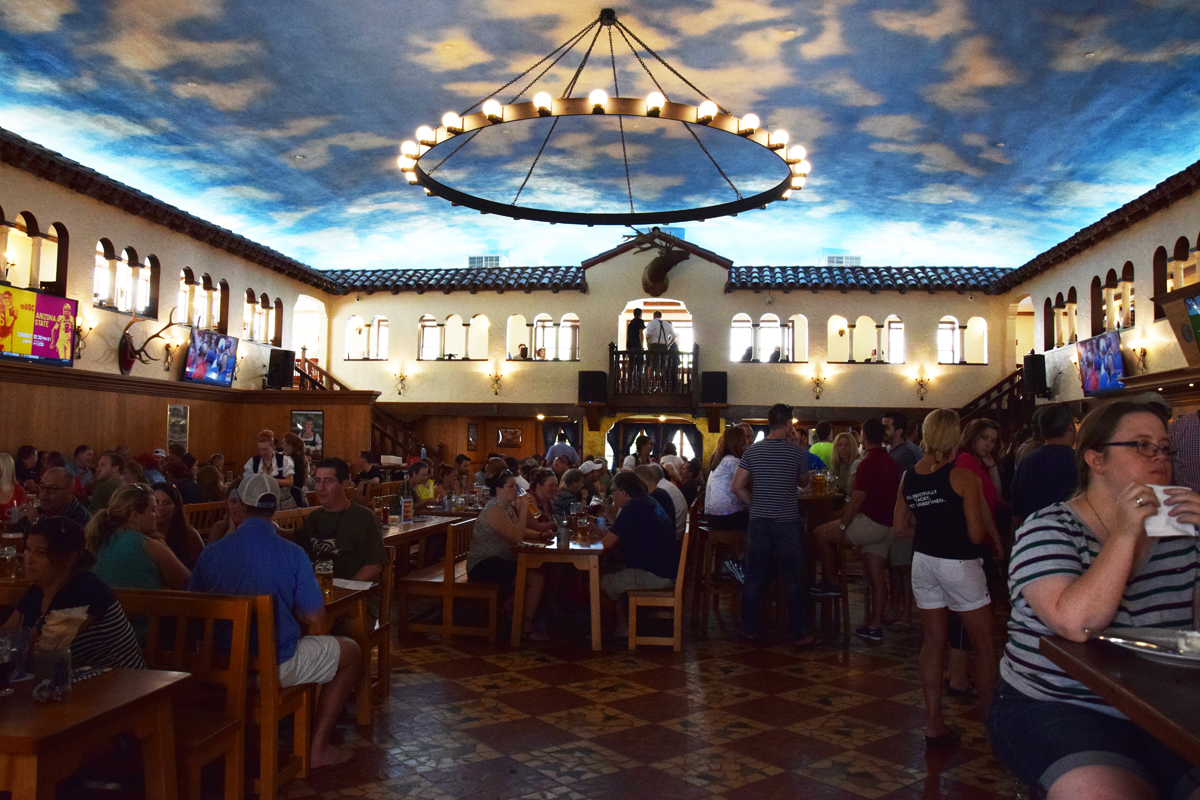 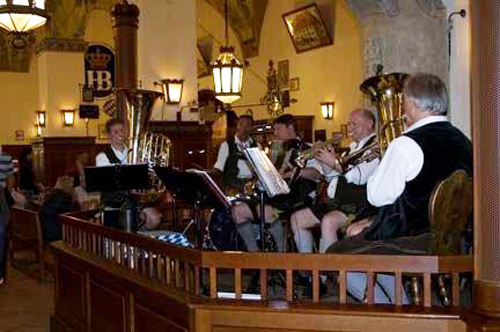 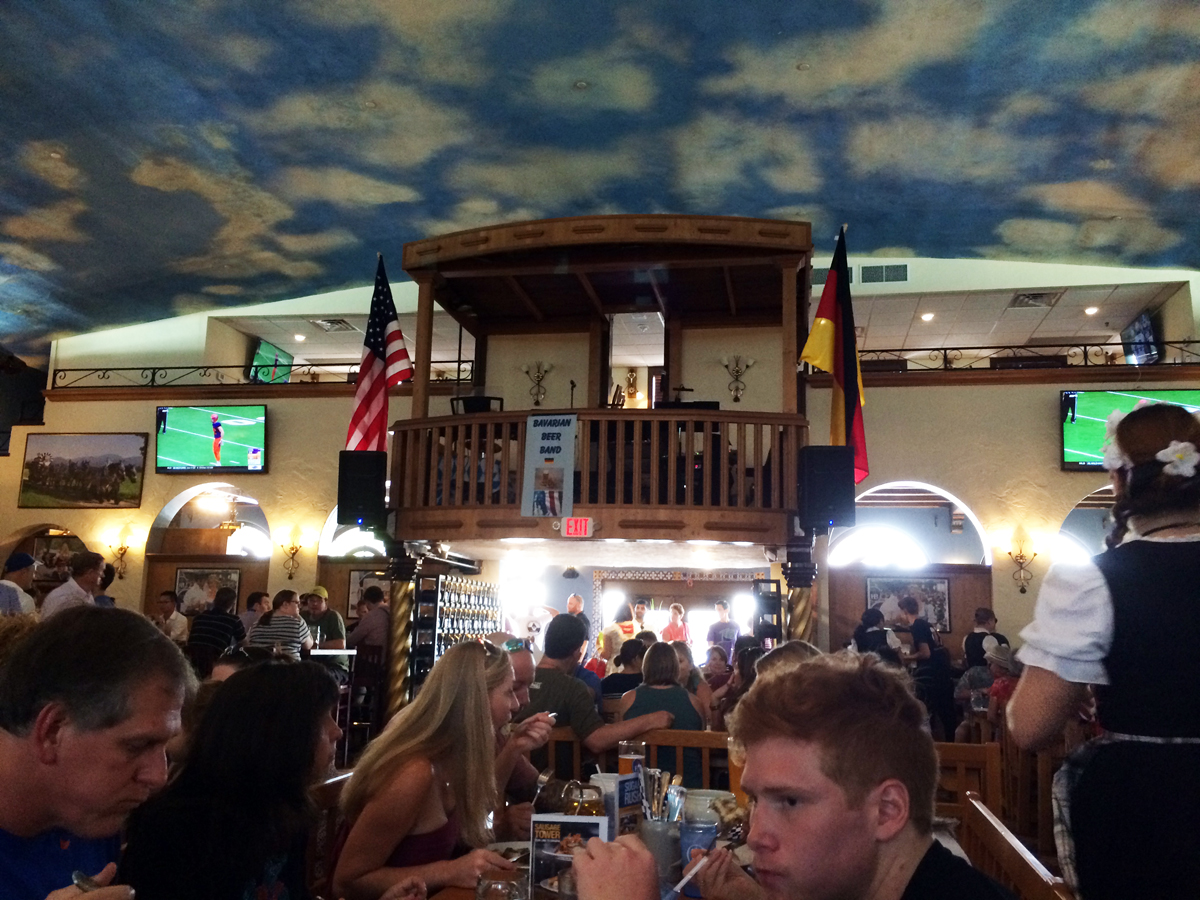 Though the bandstand was silent during our visit, I read that the owners fly in musicians from Bavaria for 90-day stays to perform at the beer hall. Regardless, the noise inside was deafening!
Biergarten MUC – a huge, 2-level courtyard: 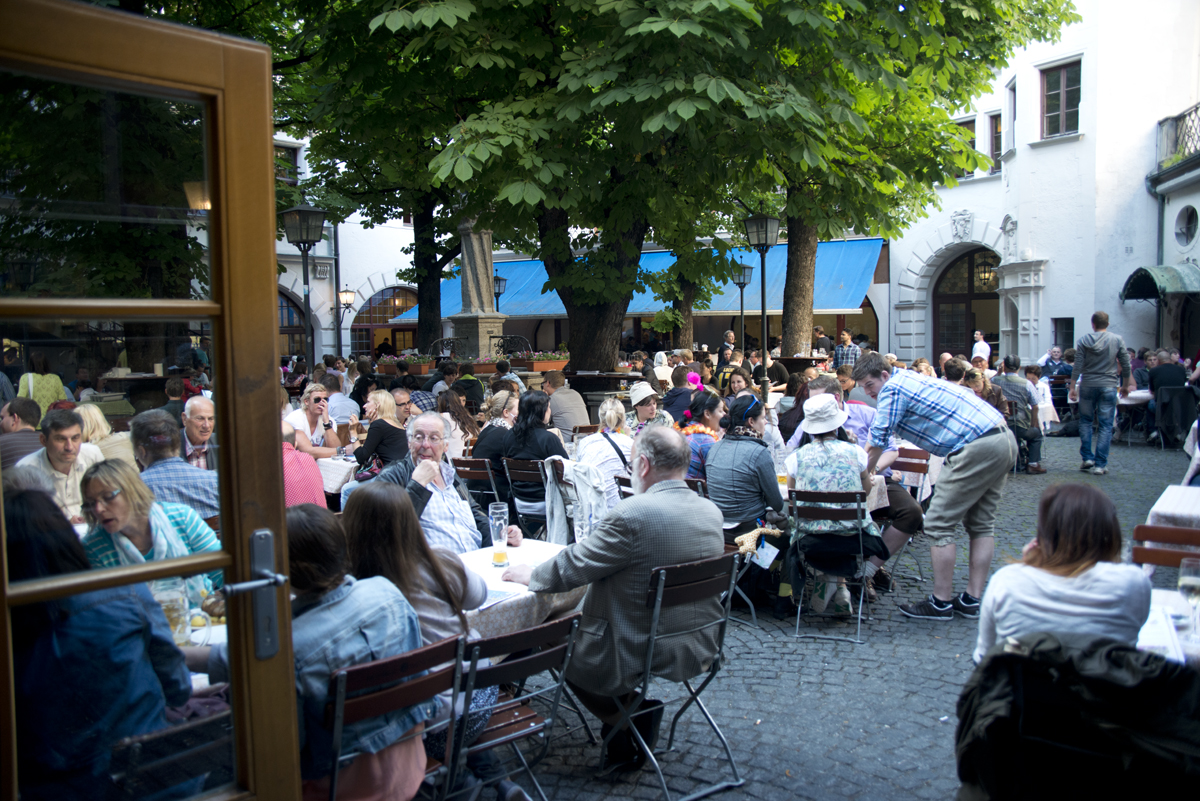 Biergarten SP – two rows of real beer tables and chairs next to the parking lot: 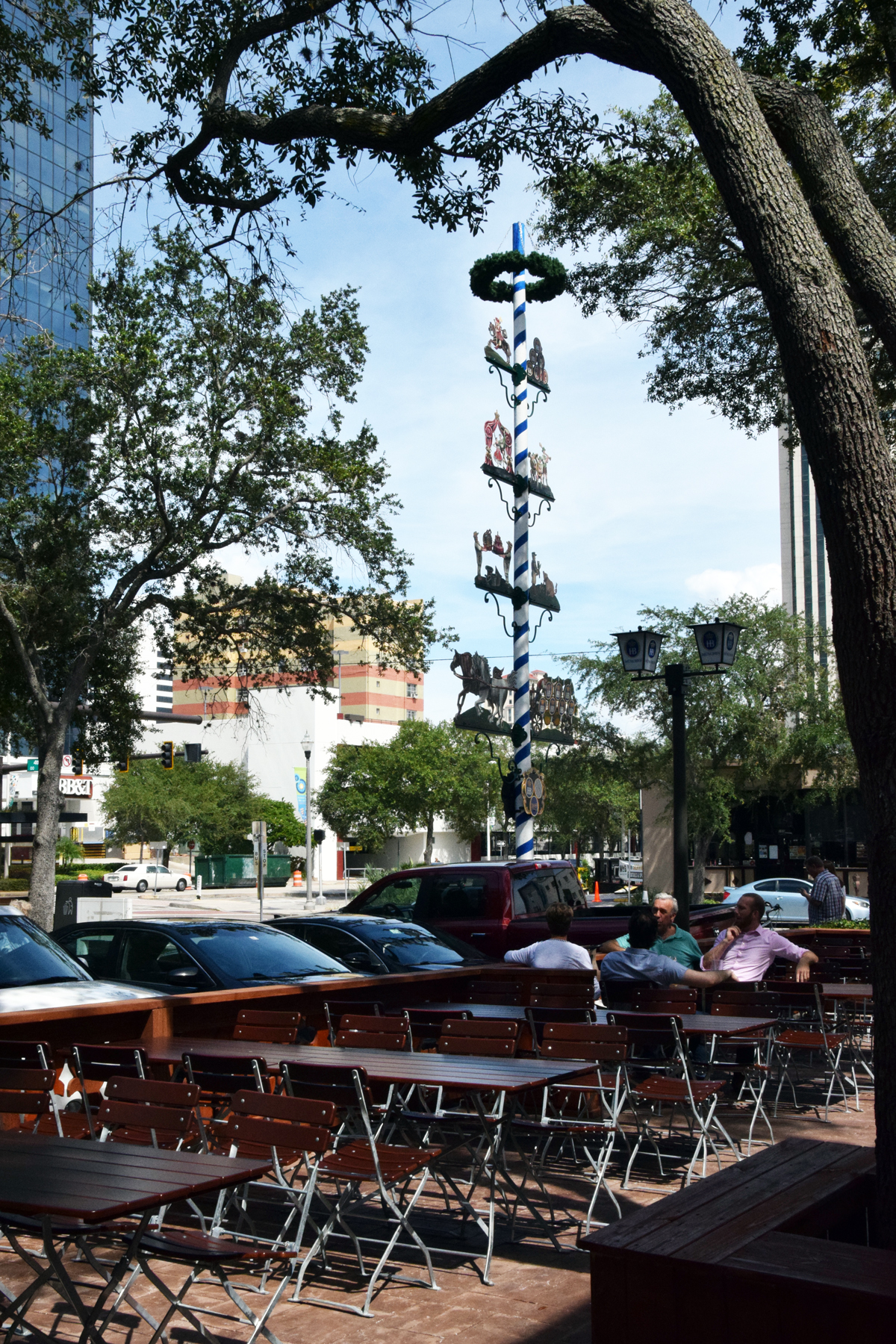 As I said, the SP beer was definitely Hofbräu, and so were the glasses, deckels and staff uniforms: 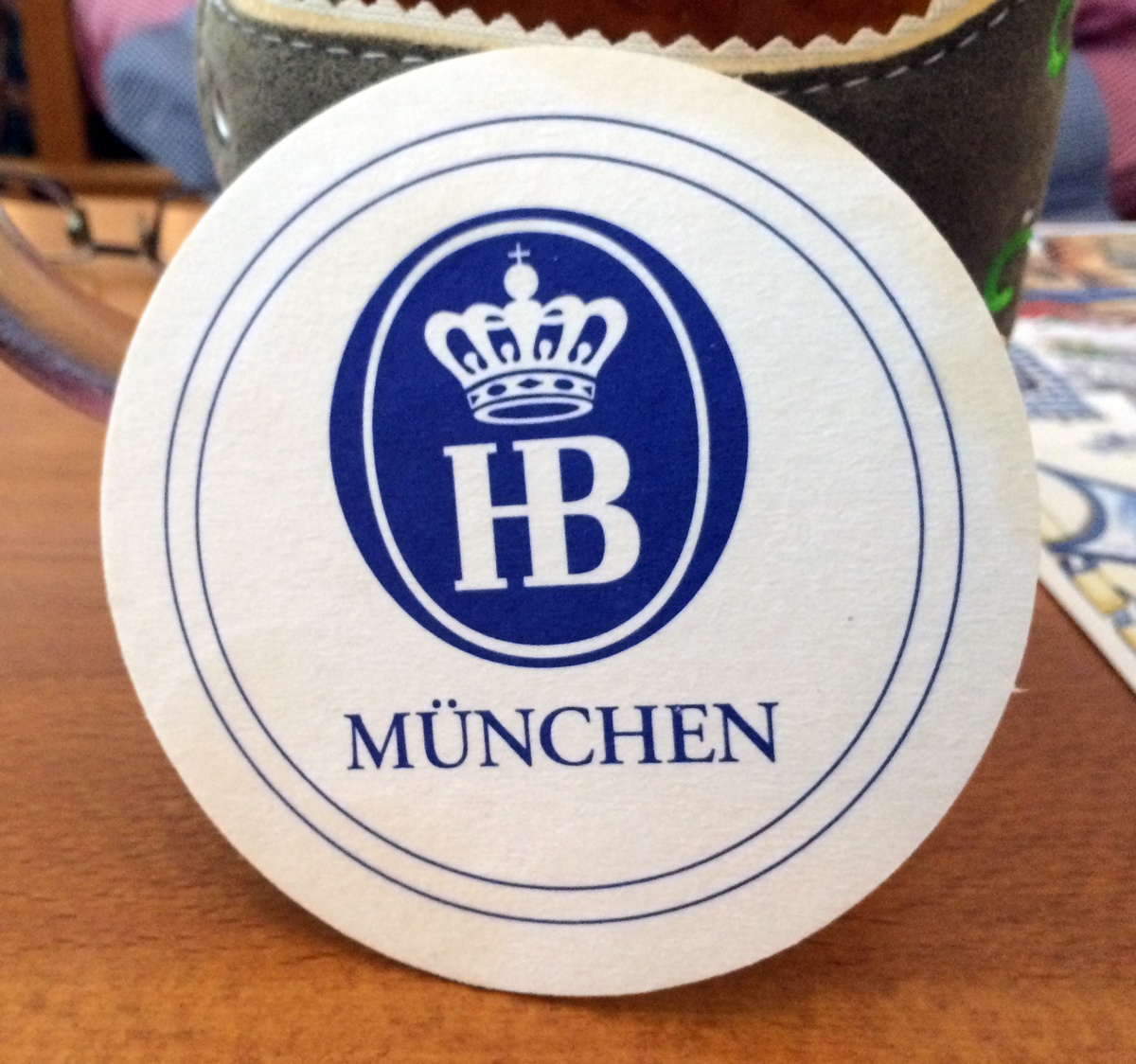 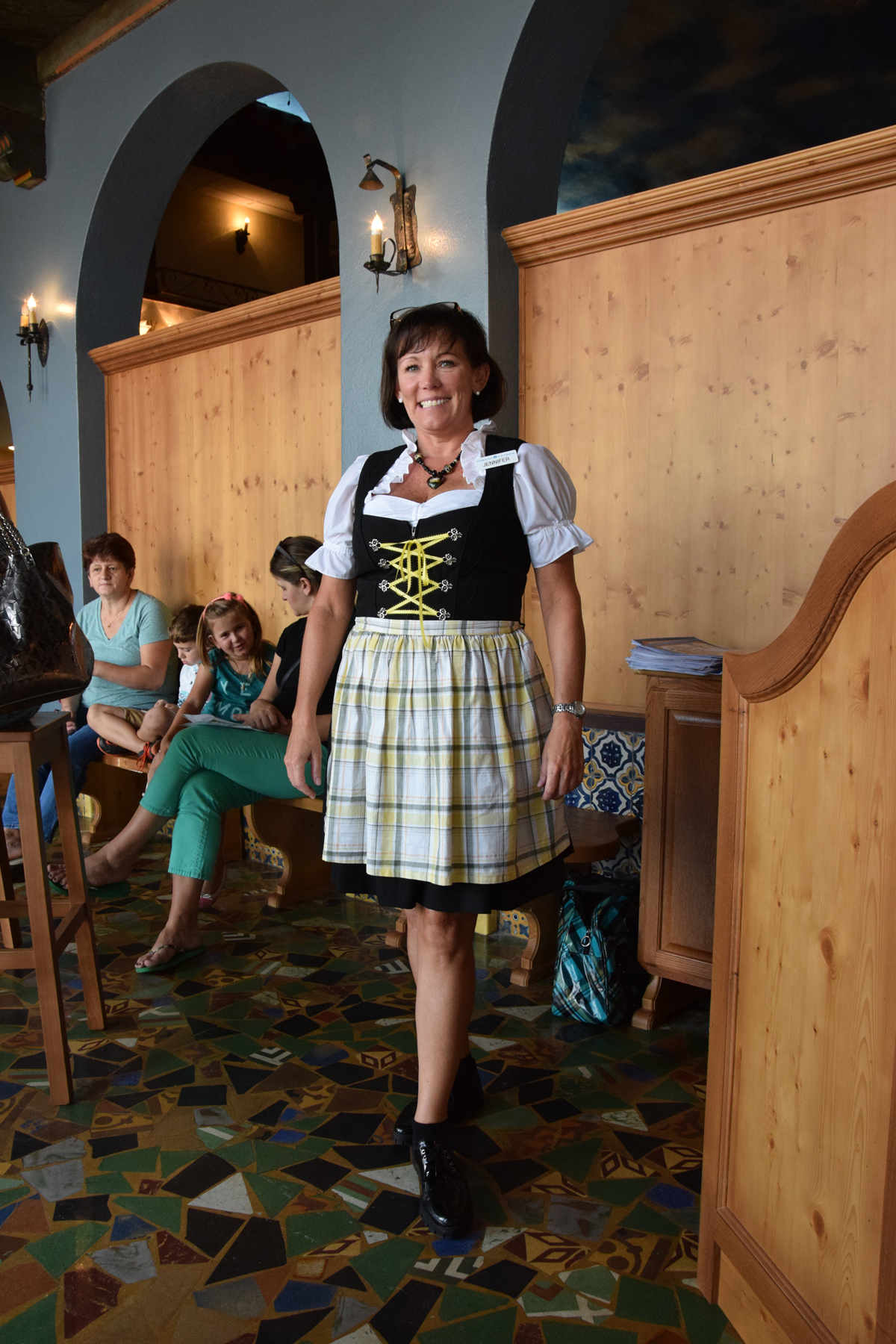 The food was tasty and also authentic. Although the menu wasn’t exactly the same as Munich’s, the flavor and culture were there. The pretzels looked the part, but the texture was much softer than Bavaria’s. There were a few other Americanized tweaks, but for the most part it was on the mark. 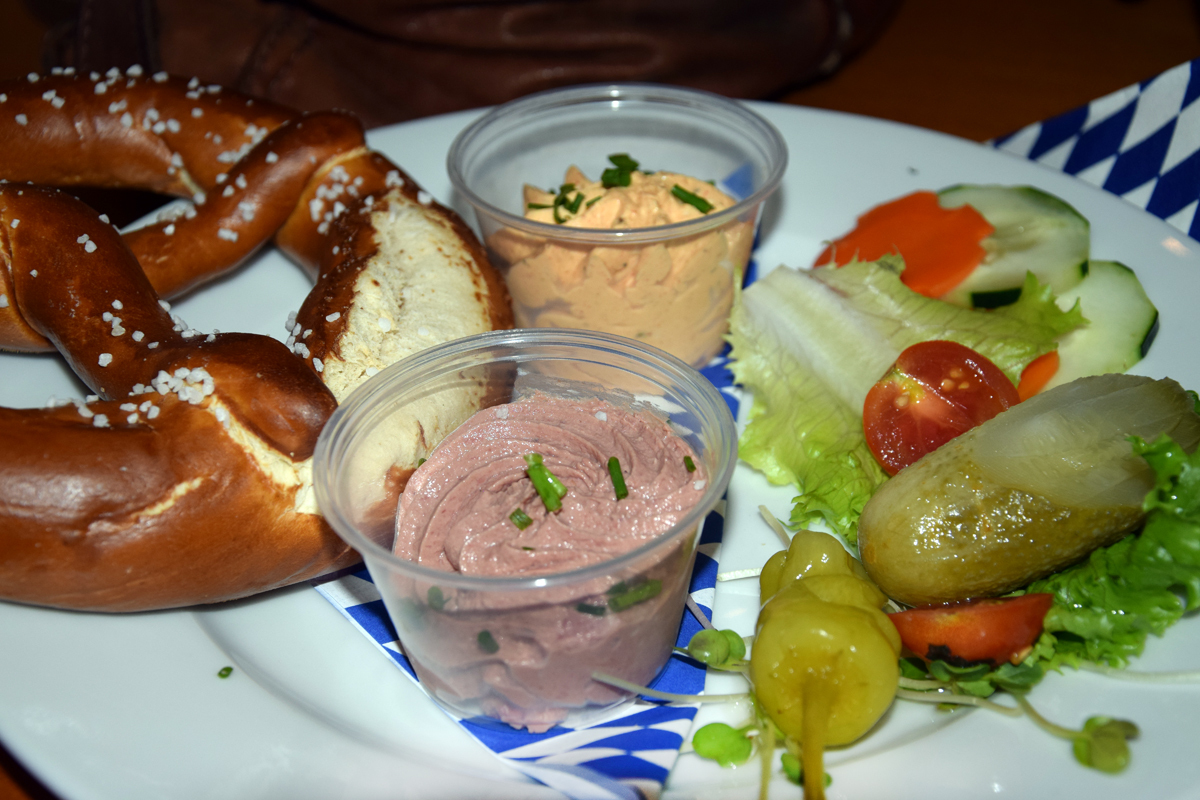 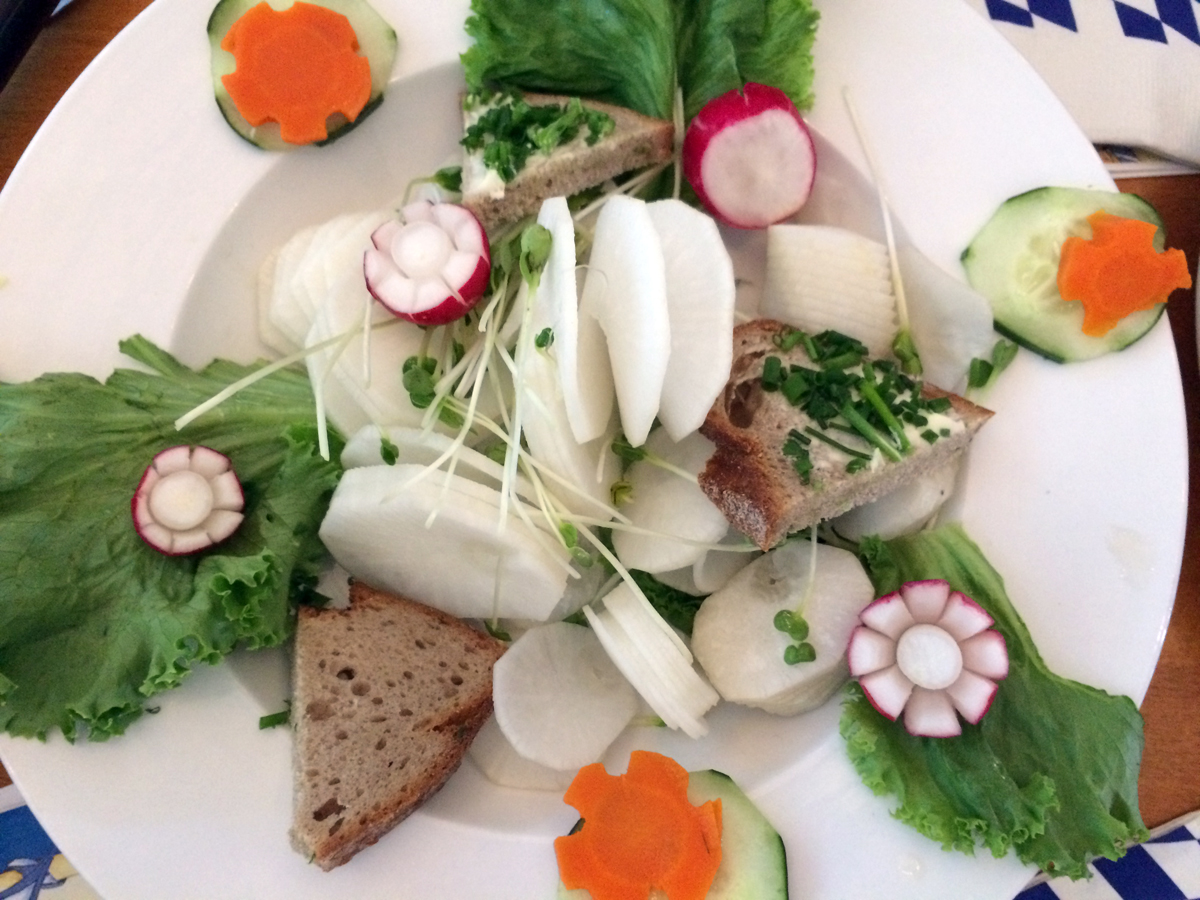 I had to order the Radi, of course. You can see the very small hole in the middle of the spiral, which is something I mentioned in last week’s post. 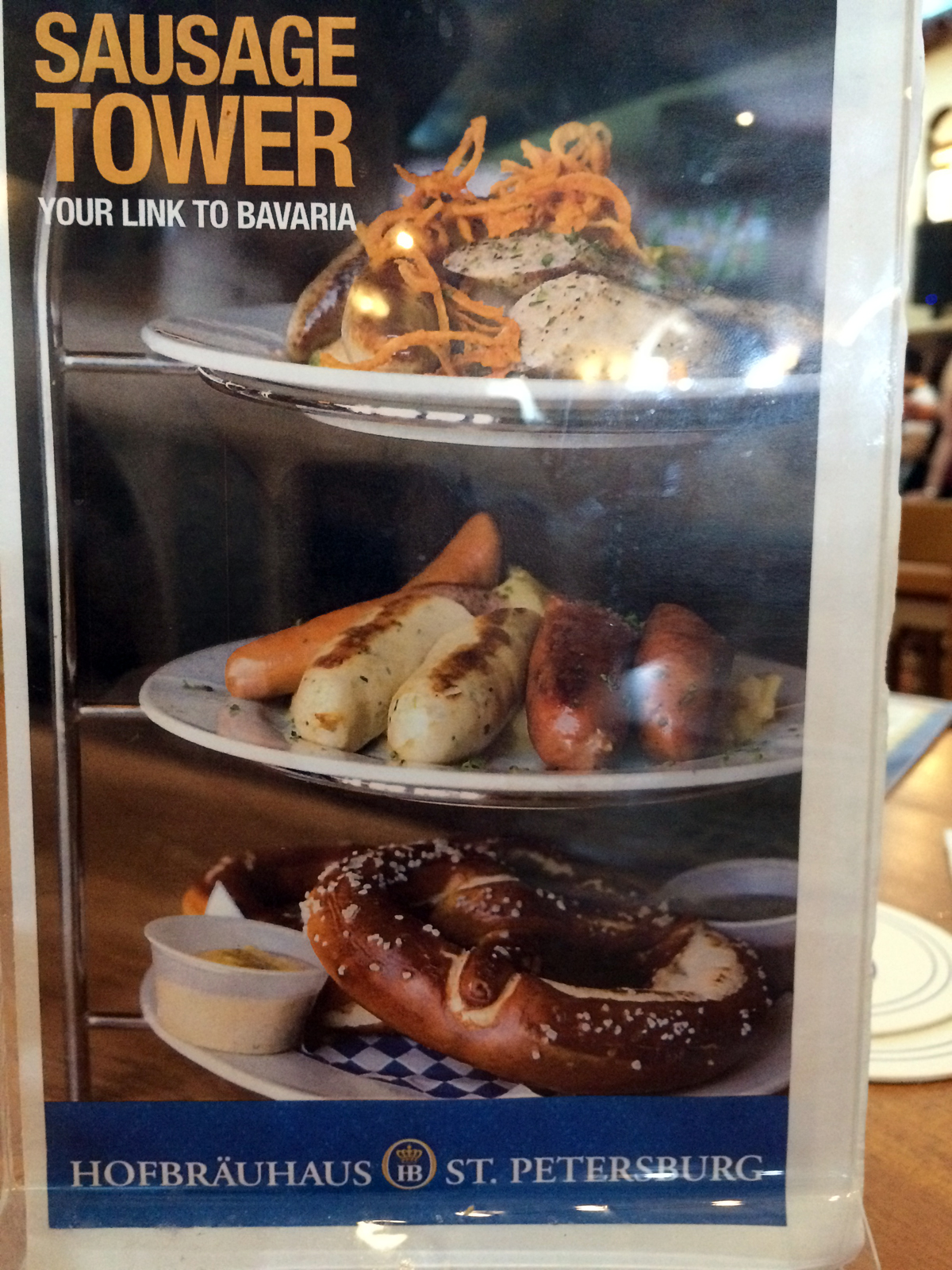 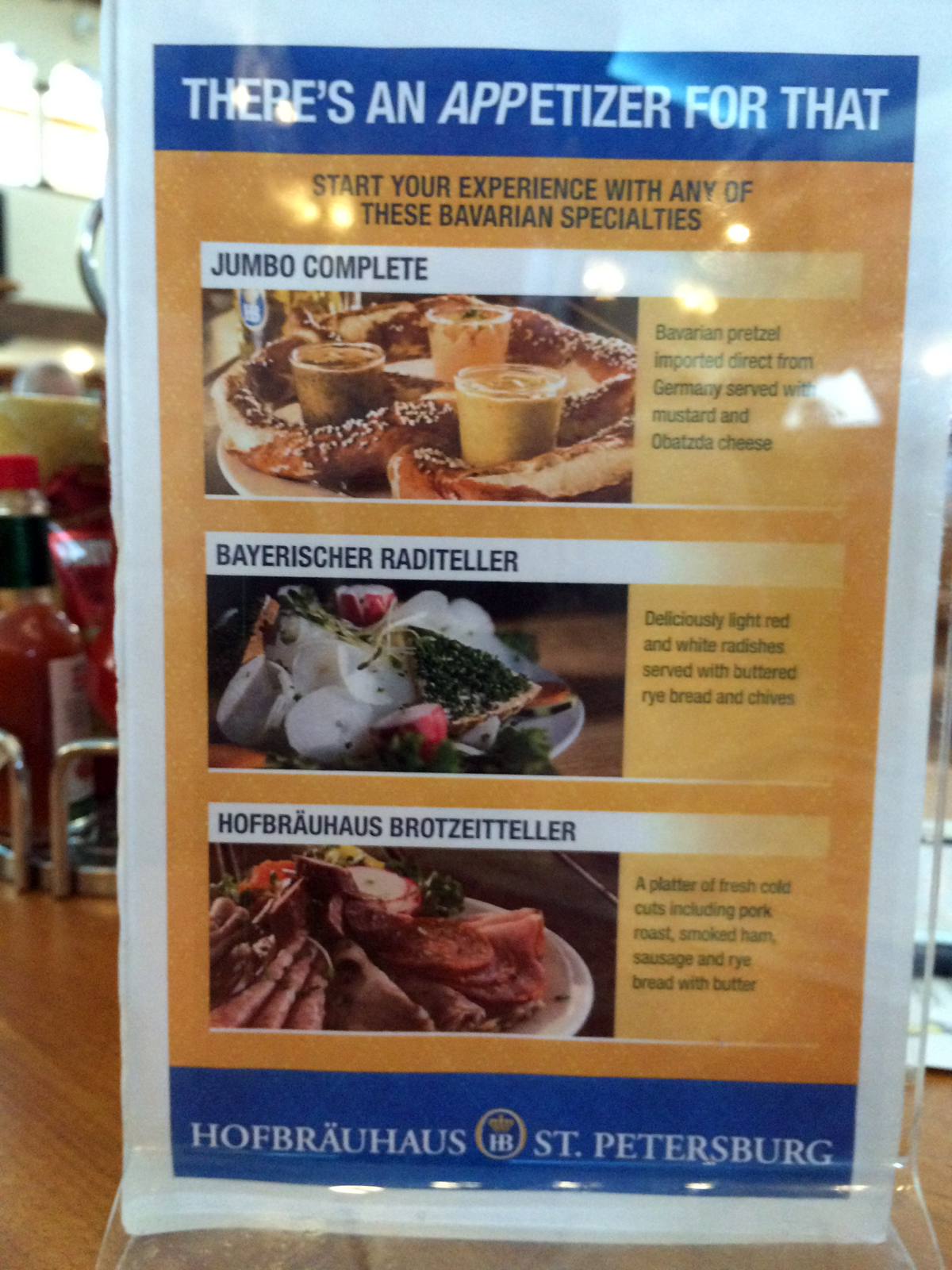 However, I’m PRETTY sure there aren’t any Margarita-like drinks on the menu in Bavaria (see “Hofbrau Rita” in the top right section)! 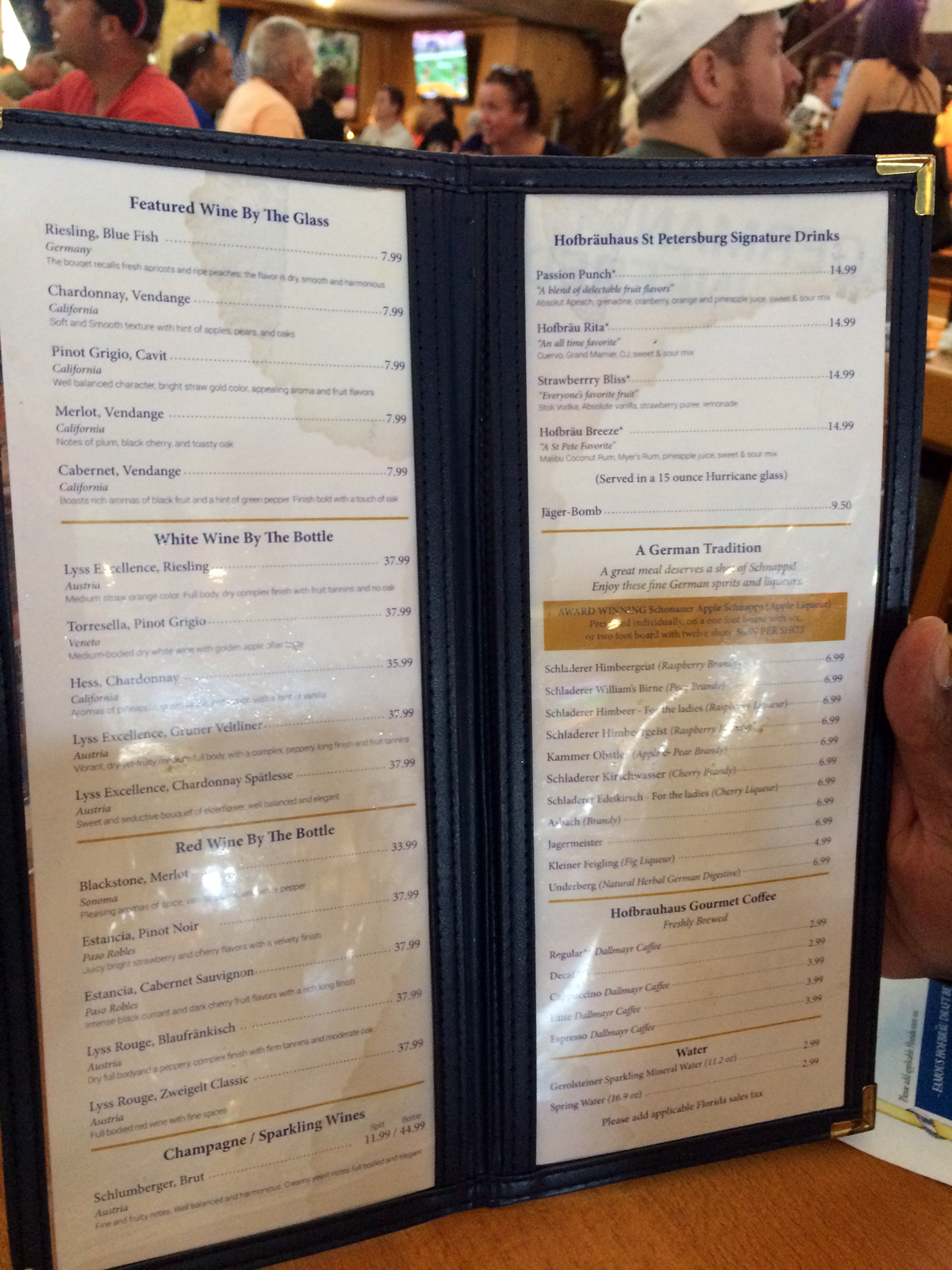 Three things stand out as being far, far different in SP than in MUC. First, any beer hall in Bavaria, including Hofbräuhaus is a seat-yourself deal. You always find your own table. In SP, there was a hostess: 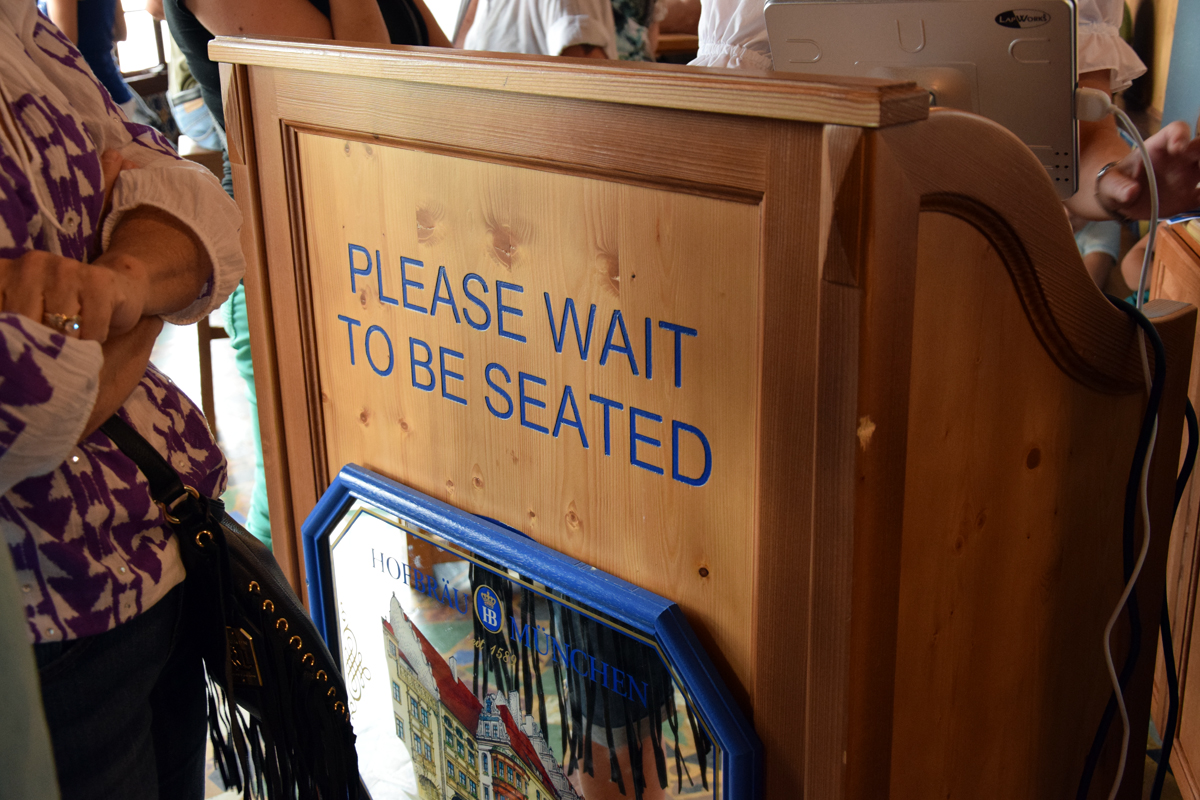 Second, there are absolutely NO television sets in the MUC location, or any other Bavarian beer hall for that matter. Here’s SP: 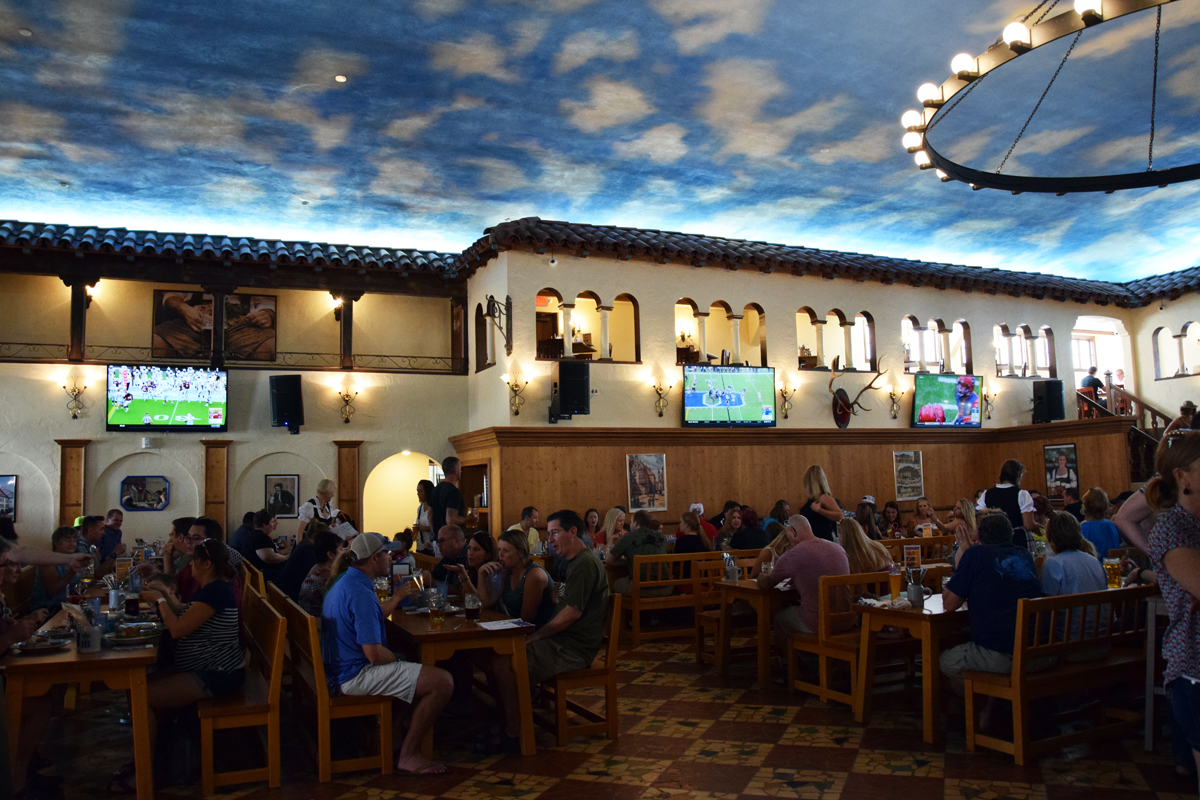 And third, and weirdest, is the “spanking” that goes on here. Say a customer orders a shot (of anything). The waitperson brings the shot glass on a wooden paddle. This is actually Bavarian.
But what isn’t is that, as the customer is downing the shot, the waitperson incites the rest of the beer hall to a frenzy by beating the wooden paddle on the table and gesturing for noise. Then the customer must bend over a nearby bench and get three whacks with the paddle by the waitperson: 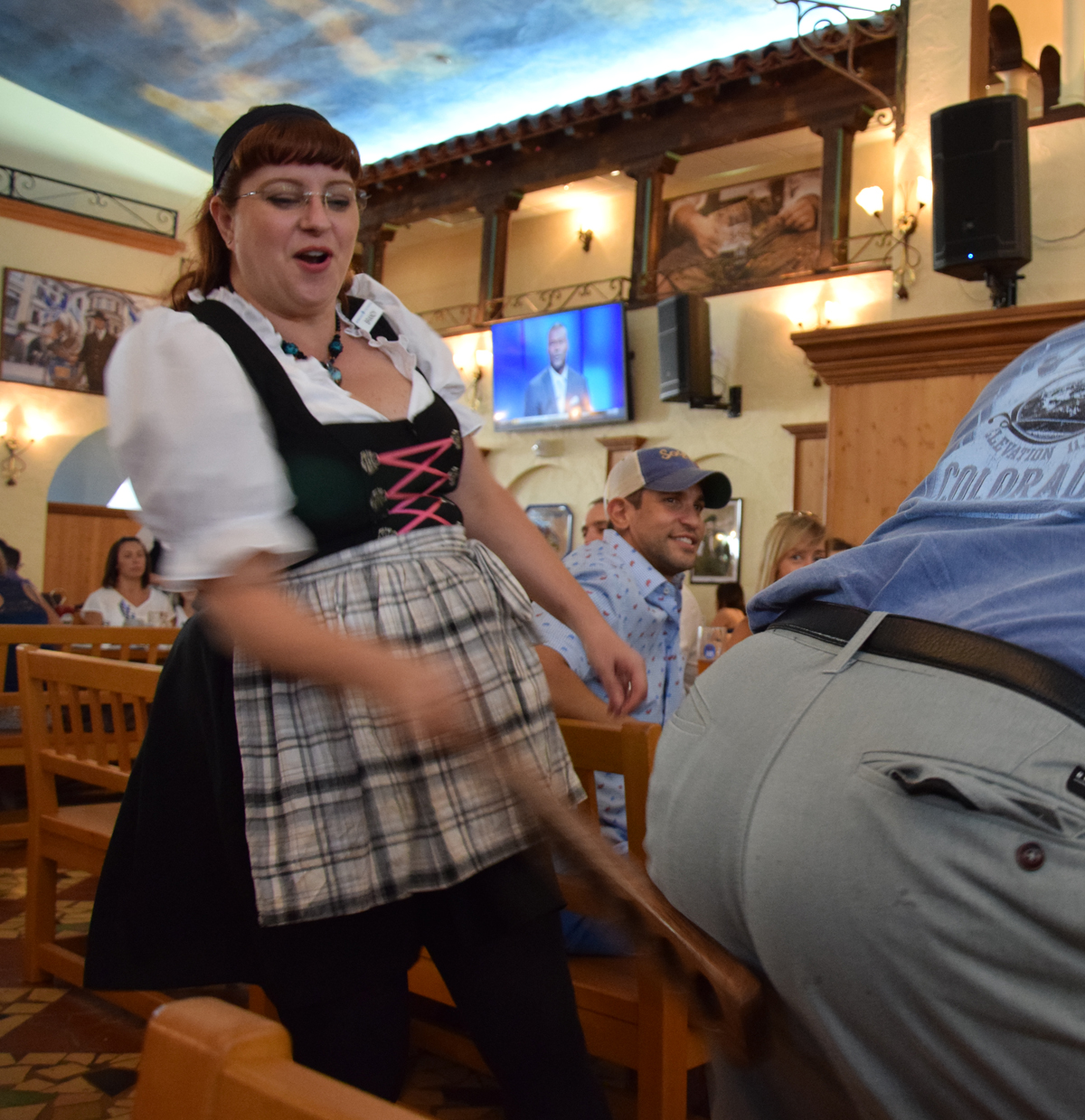 Some wait staff are far more enthusiastic about it than others (this was our waitress): 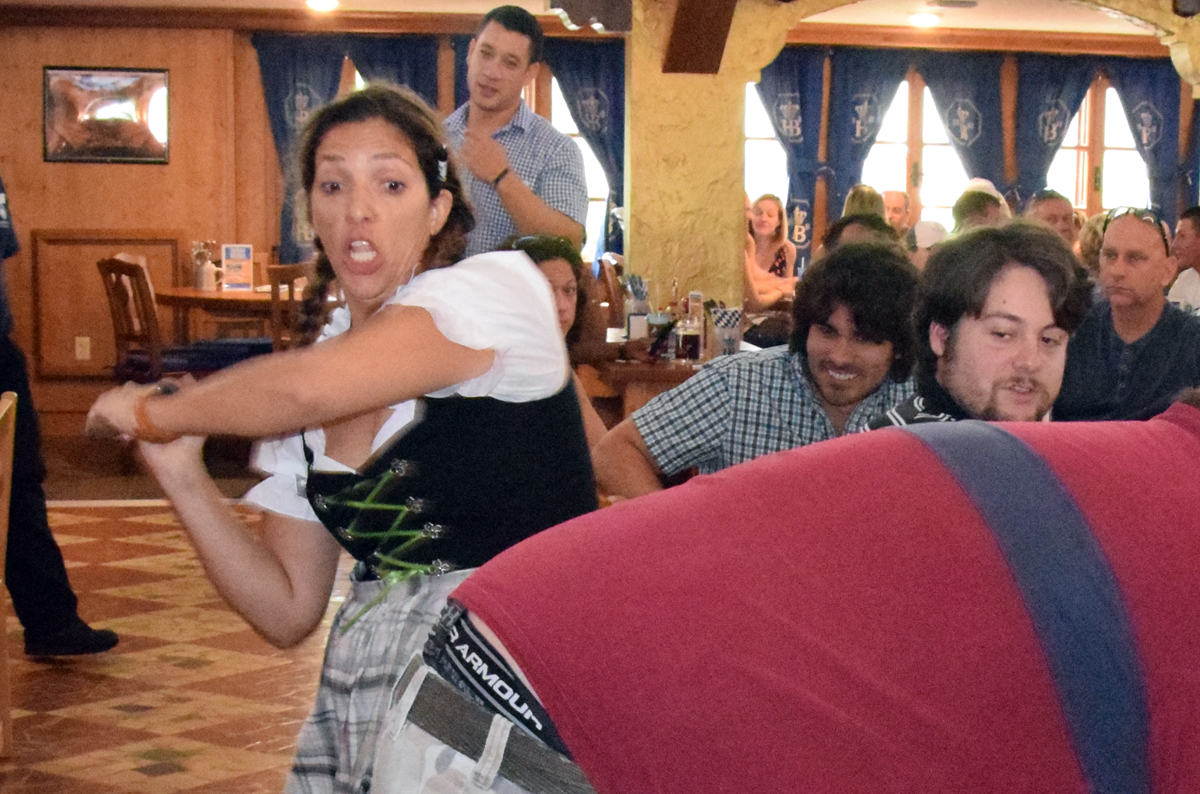 I didn’t partake of this brand of barbarism, but those of my party who did said the waitress checked with them about how hard they wanted to be hit. When they said, “Gimme all you got,” it apparently really stung the rest of the night!

I did do some research about this odd behavior. Seems only the Hofbräuhaus locations in the USA do this. I even polled my German students to see if they’d heard of it and I’d just had my head in the sand for the past five years. But it’s definitely a ‘Murican thang. What??? If you’ve ever heard of this anywhere else, please leave me a comment below.

But overall it was a really fun experience and the atmosphere and service are great. The food fits the bill and the beer is definitely real German brew. It was noisy and crowded but we got in with only a 20-minute wait on a Saturday afternoon about 2pm. Let me know if you go and give us your impressions in the comments. 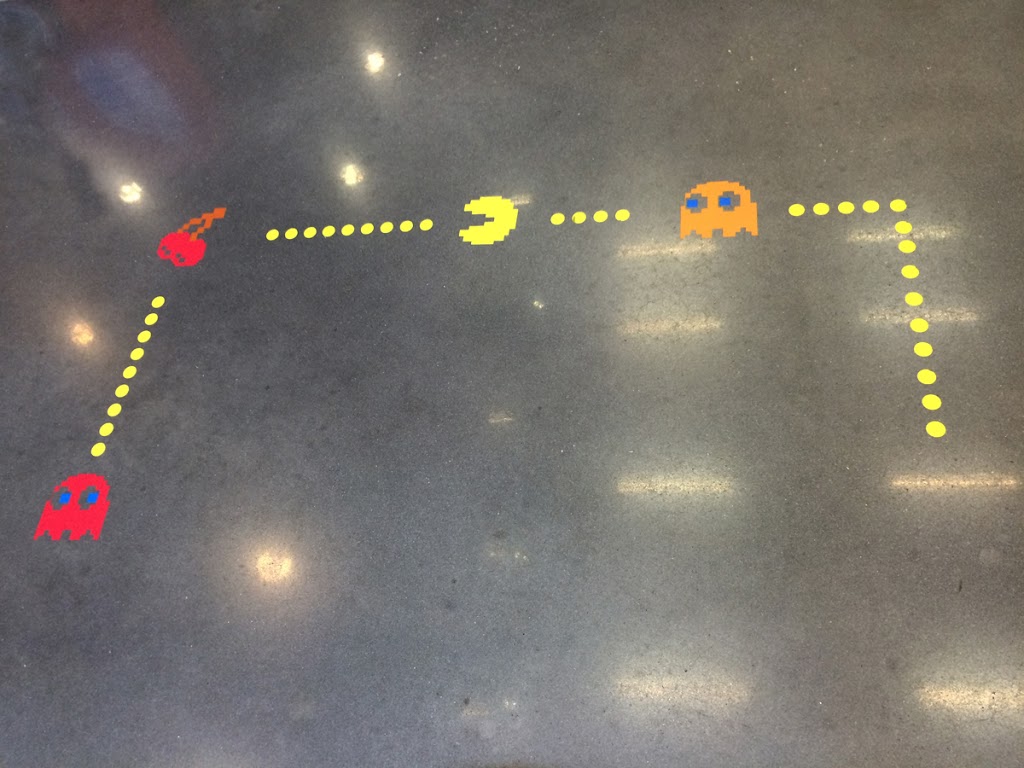 1 thought on “Hofbräuhaus in St. Petersburg, FL vs. Munich”