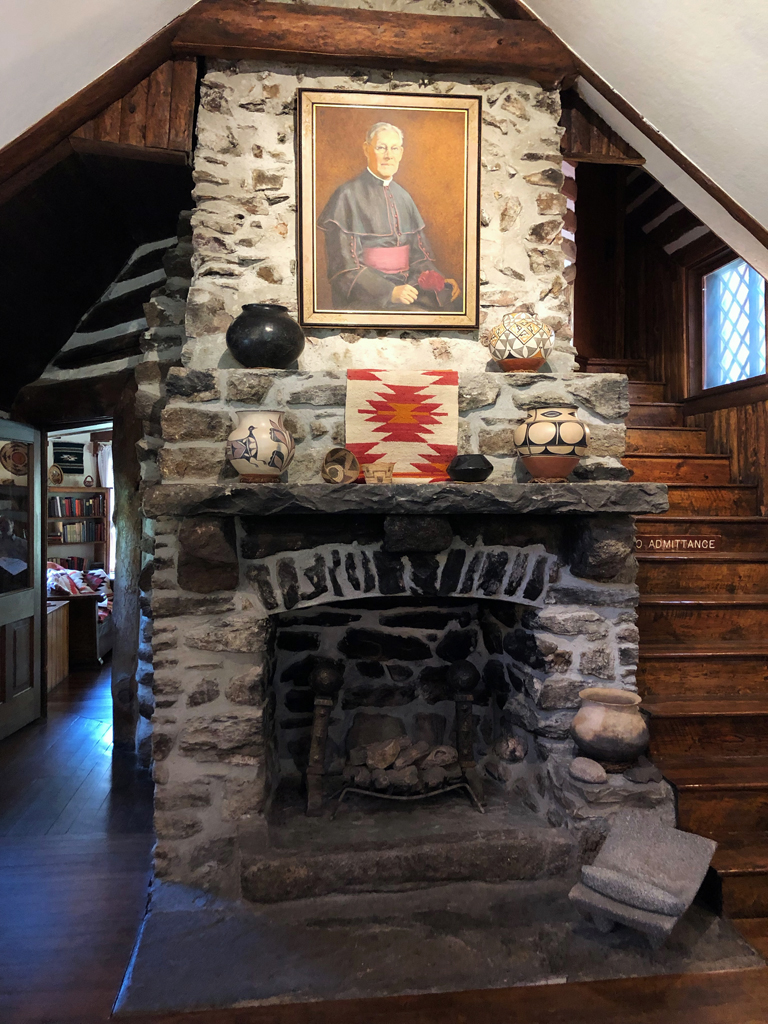 The past couple of posts described Evergreen, Colorado, and the nearby Hiwan Heritage Park. This week I bring you the Hiwan Homestead Museum, which is part and parcel of the park. Located on the Lariat Loop Scenic Byway (Colorado 74), it’s an easy drive up from Denver.

The museum is actually a homestead initially built in the 1890s and was added to until the 1930s by multiple families. It was a summer mountain home for those people and has been restored to the period. It’s now on the National Registry of Historic Places. It’s quite impressive! You saw the front of the house in last week’s post – didn’t you?

My friend Laura (whose idea this trip was) and I were greeted by the most knowledgeable tour guide I’ve seen in a while. It’s amazing that volunteers like this have so much passion and are willing to share it with us visitors.

She led us into the foyer where I shot this photo of photos of the people who’d lived there: 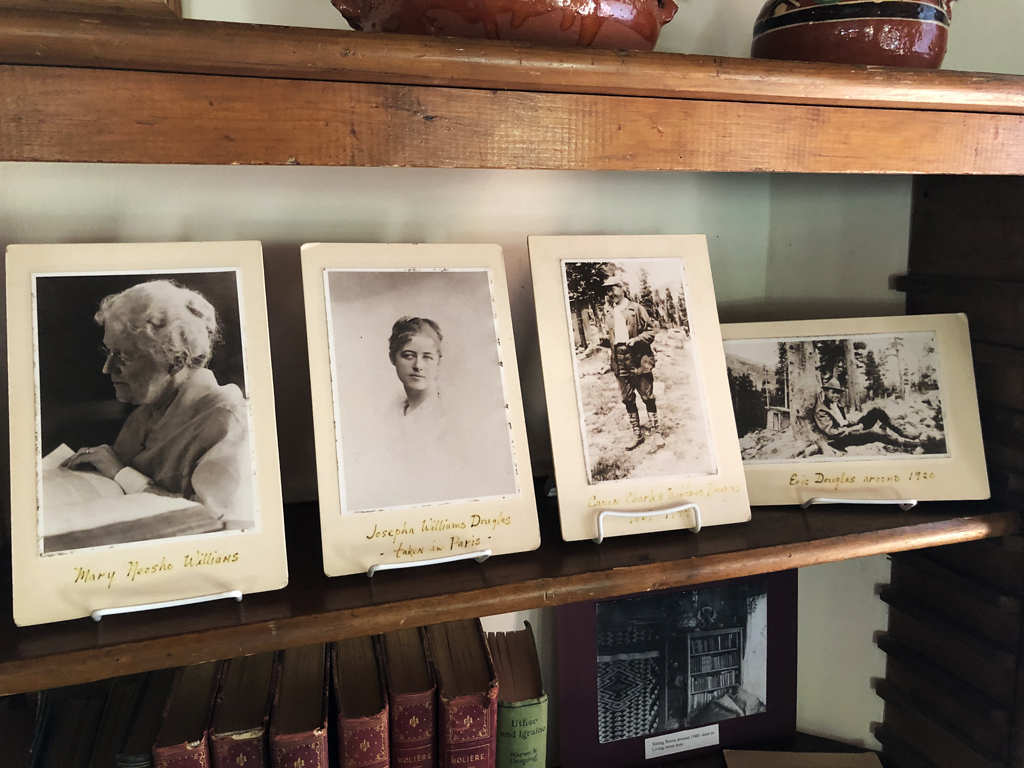 The older woman on the far left is Mary Neosho Williams. She and her daughter Josepha (second picture from left) camped in Evergreen during summers and eventually bought this place. They hired John “Jock” Spence, a very talented Scottish carpenter, to convert an existing cabin into a cottage. The place is constructed of very fine carpentry work indeed. They have even preserved his tools and tool chest in the house! Eventually he made it a year-round residence. 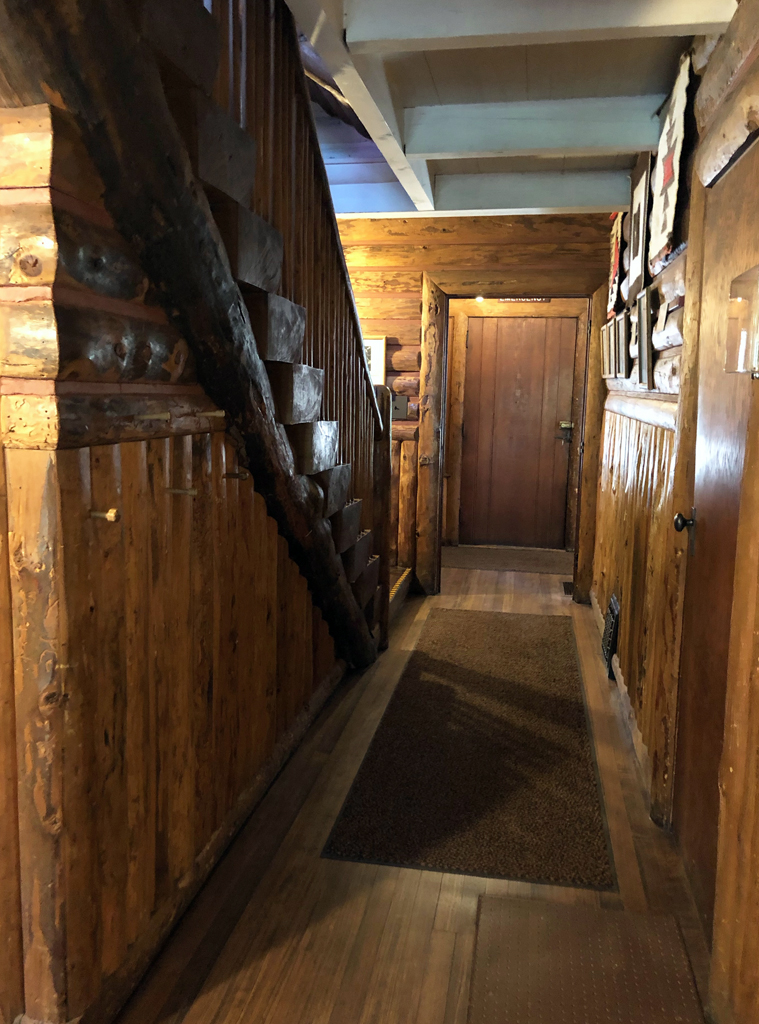 They named their property Camp Neosho (see last week’s post) and hosted friends and family in the double-walled tents I described during warm weather. Over the years, this one-story structure became a three-story homestead with seven fireplaces! Here’s our guide with one of them: 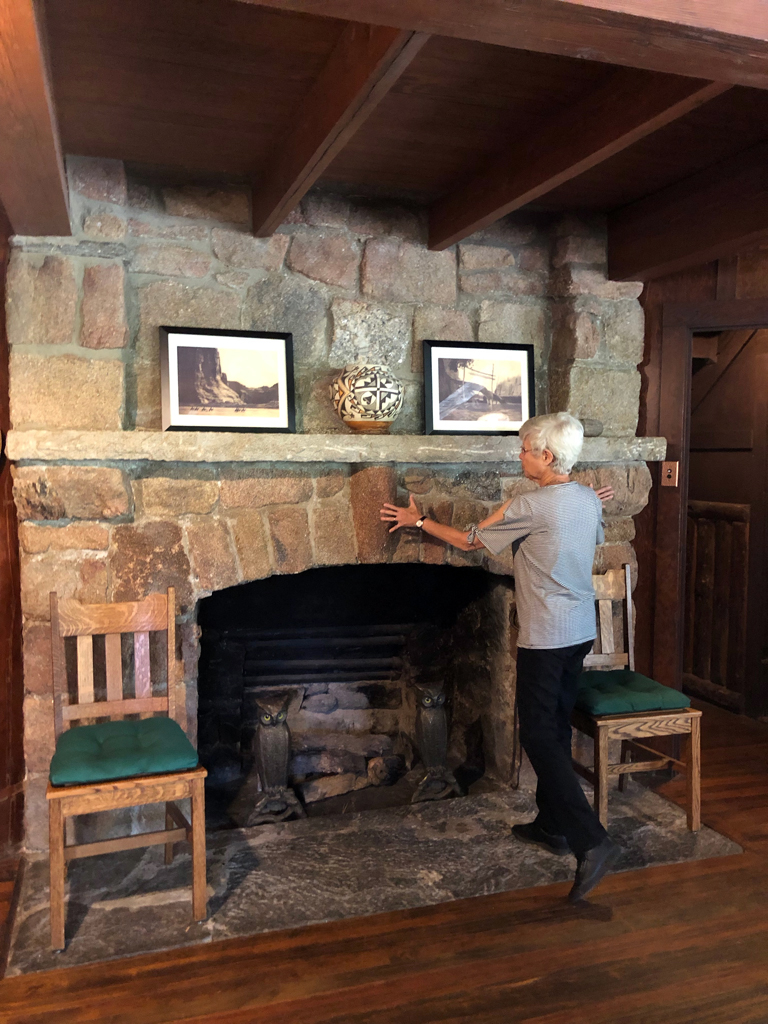 The first room we entered after the foyer was a great room with interesting furnishings: 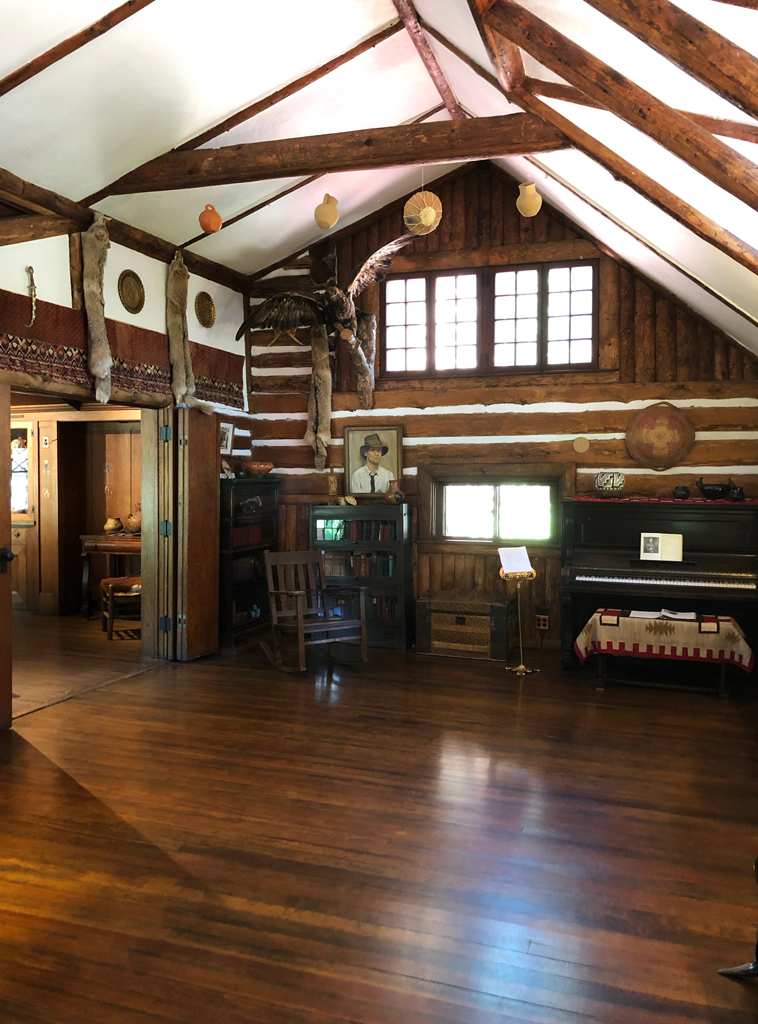 Like this buffalo-horn chair (do not sit on the chair!): 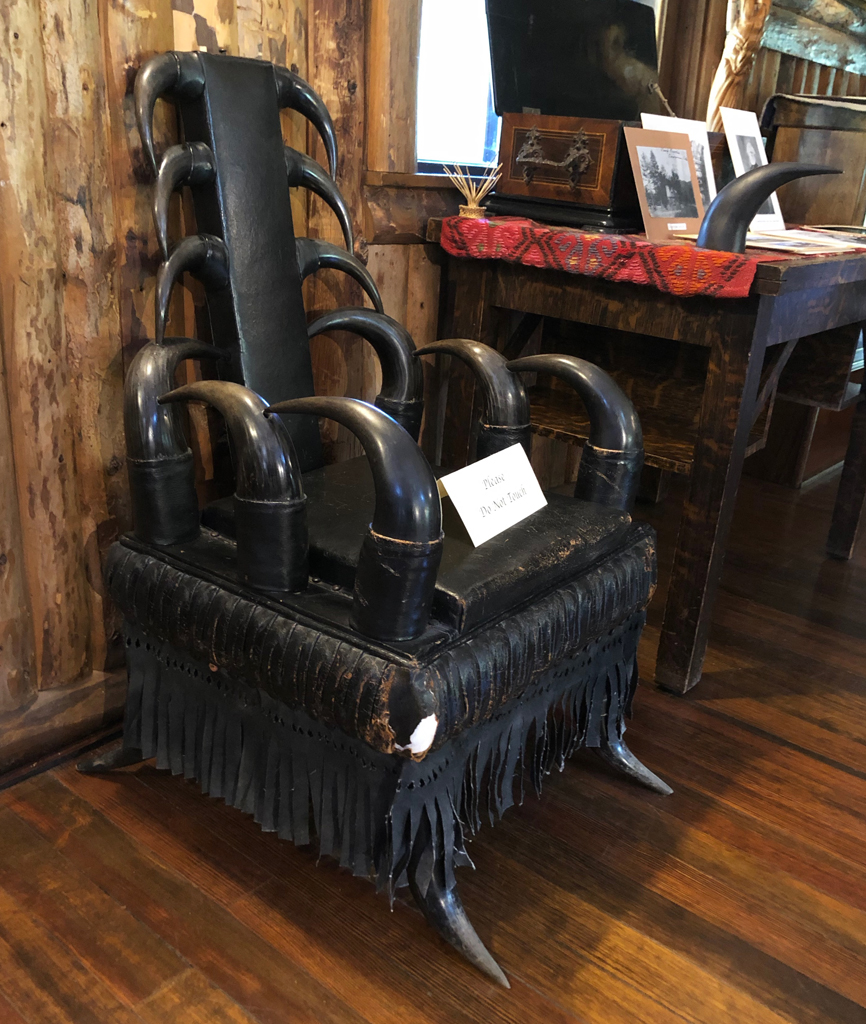 Then there was this huge dining room: 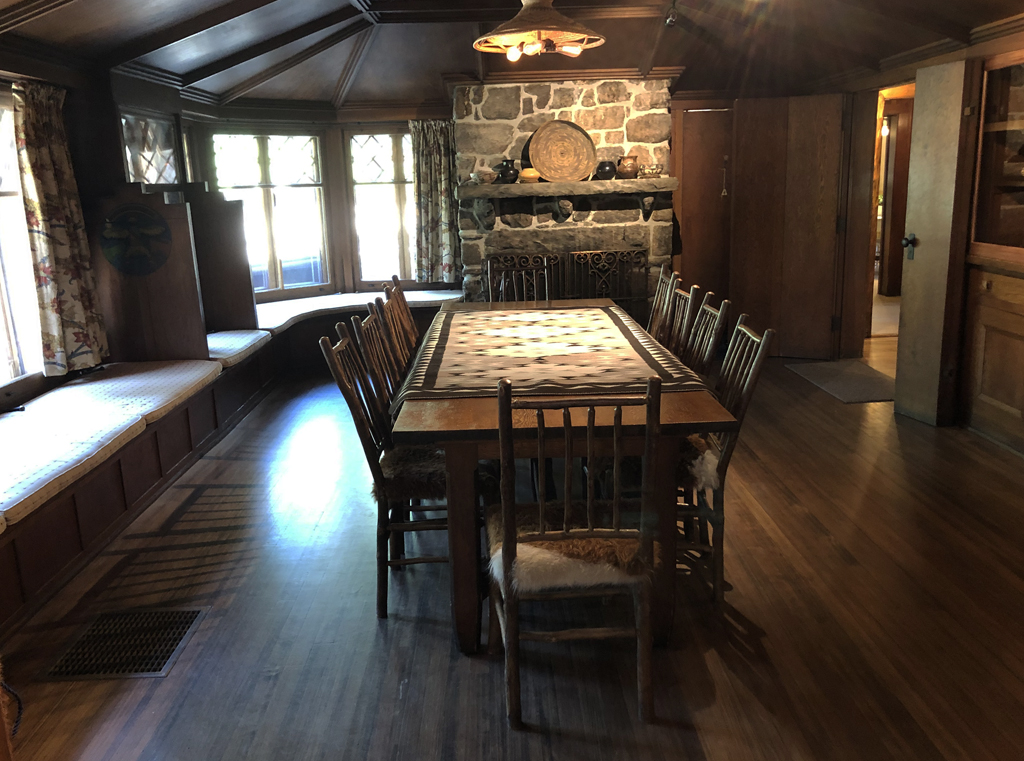 I wanted to serve Thanksgiving dinner there! One of the sons of the family that lived there spent time with Native Americans – I wanna say in New Mexico, but I’m not sure. He was interested in their artwork and created pottery, painting and inlays on the walls of the dining room in their style: 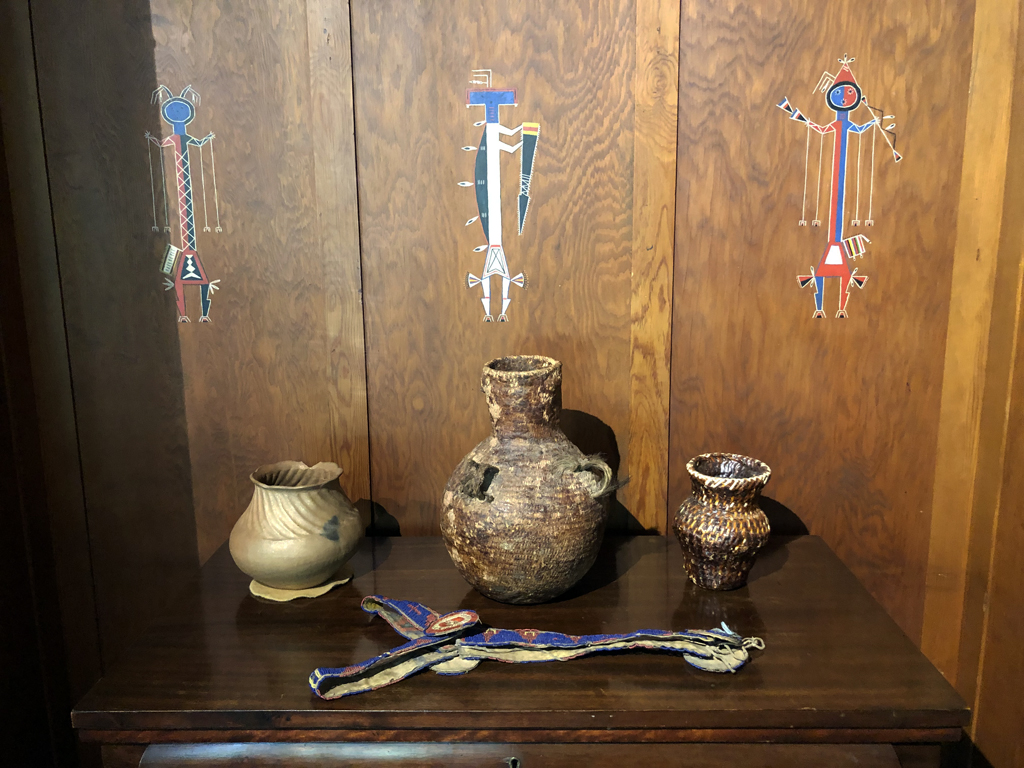 The guide explained the symbolism of this decor – sorry, I don’t remember all of it, but it seemed he truly tried to be faithful to the traditions and techniques of the artwork.

Of course, my favorite room was the kitchen. It had lots of 1930s artifacts: 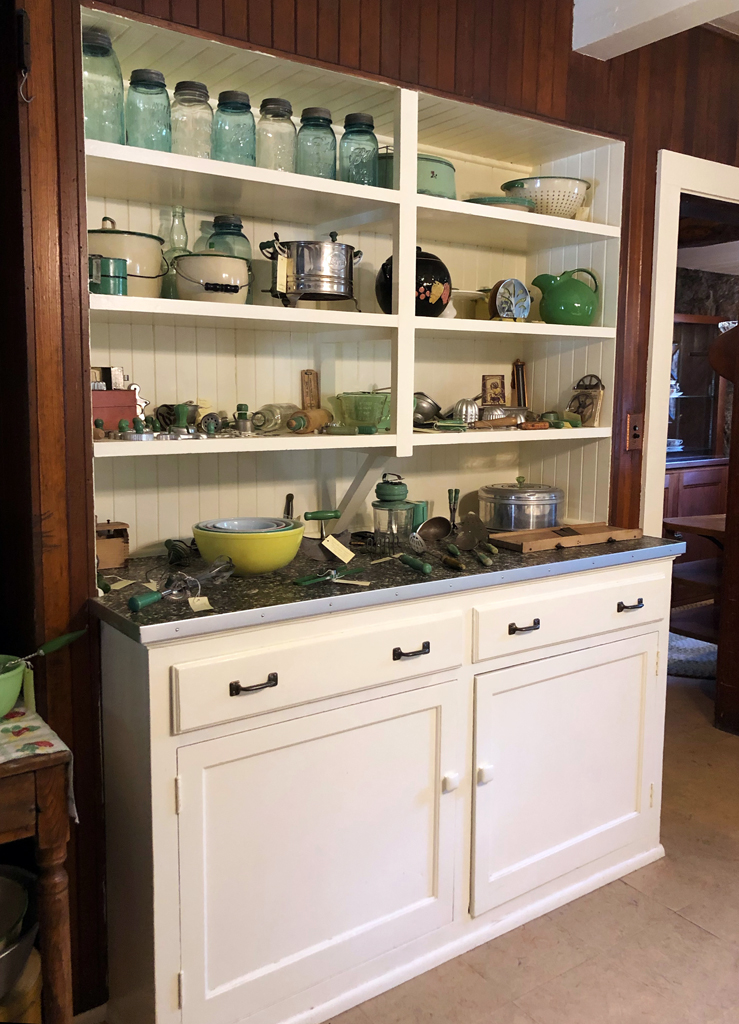 I’d love to try to cook on this stove – note the two ovens! 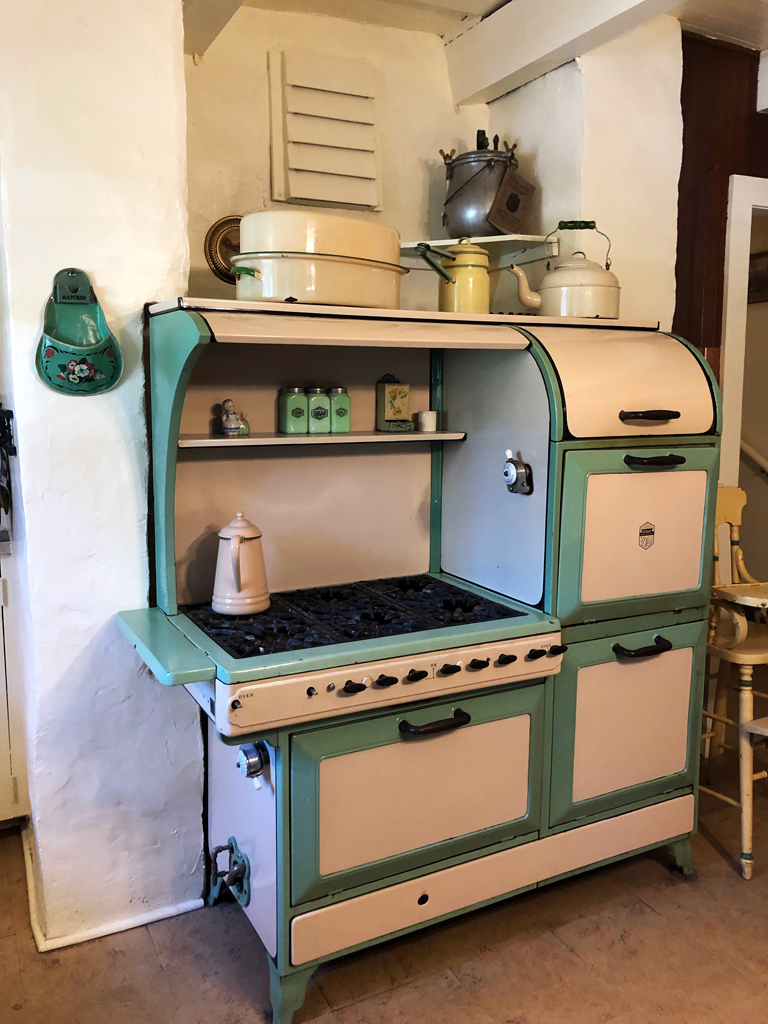 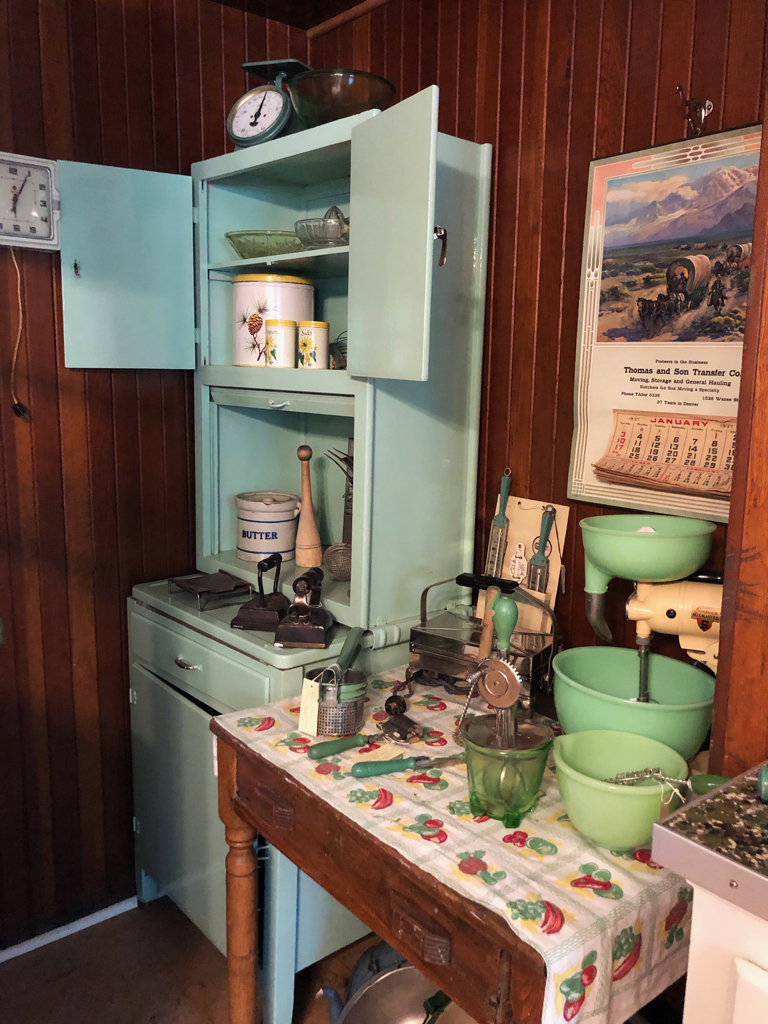 Most impressive was a sort of mud room off the kitchen. They had Jock Spence construct it to allow the ice box to open in the back. Now the ice delivery guy didn’t have to open the kitchen door to stock the ice box: 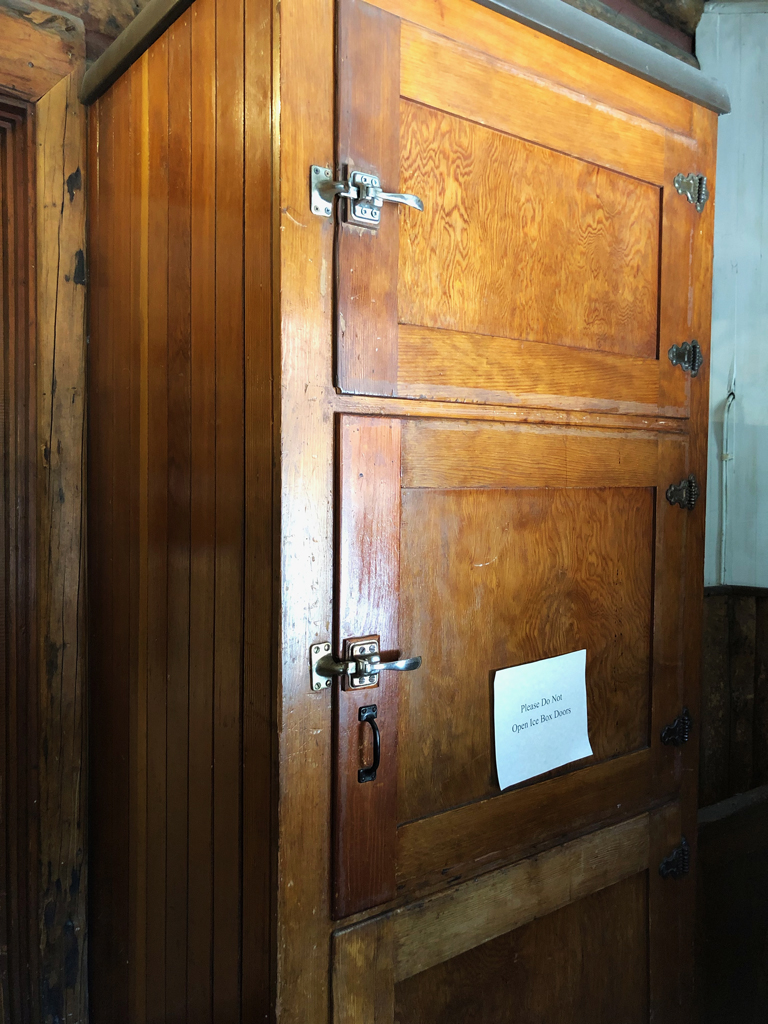 In that little room was also a pantry and such. A good design to keep the heat in the kitchen!

Widow Williams’ daughter Josepha graduated med school in 1889 and became one of Colorado’s first female doctors. Here’s her board certification: 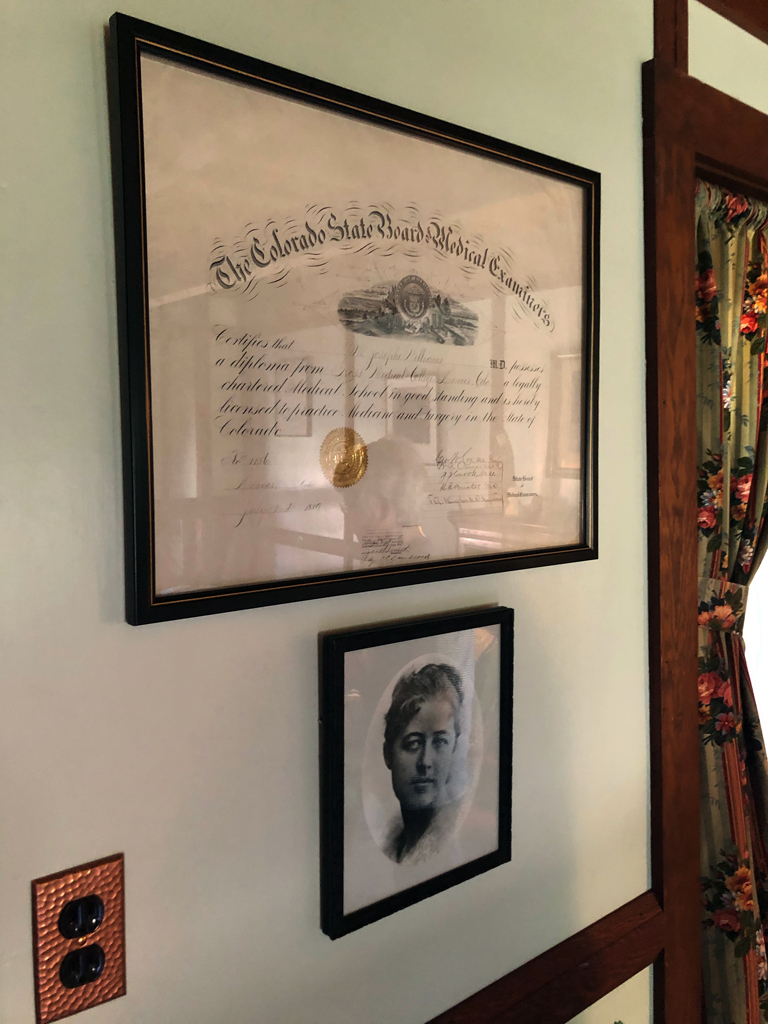 Here’s her bedroom on the second floor: 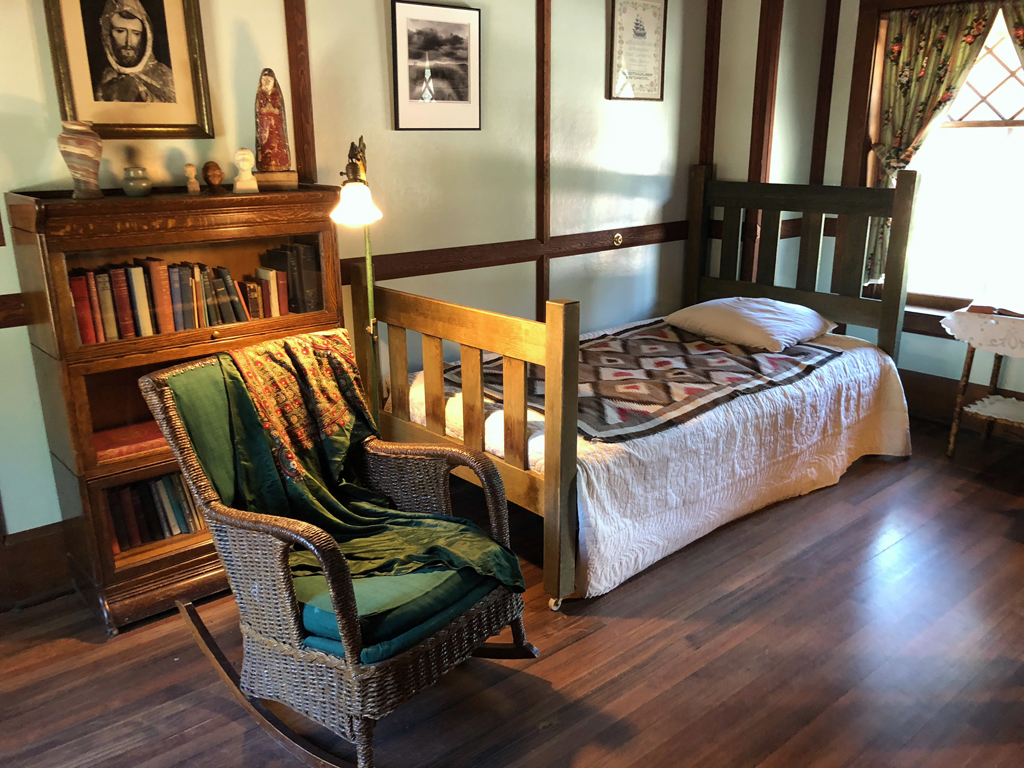 Her fireplace has wonderful inlays of Native American tiles: 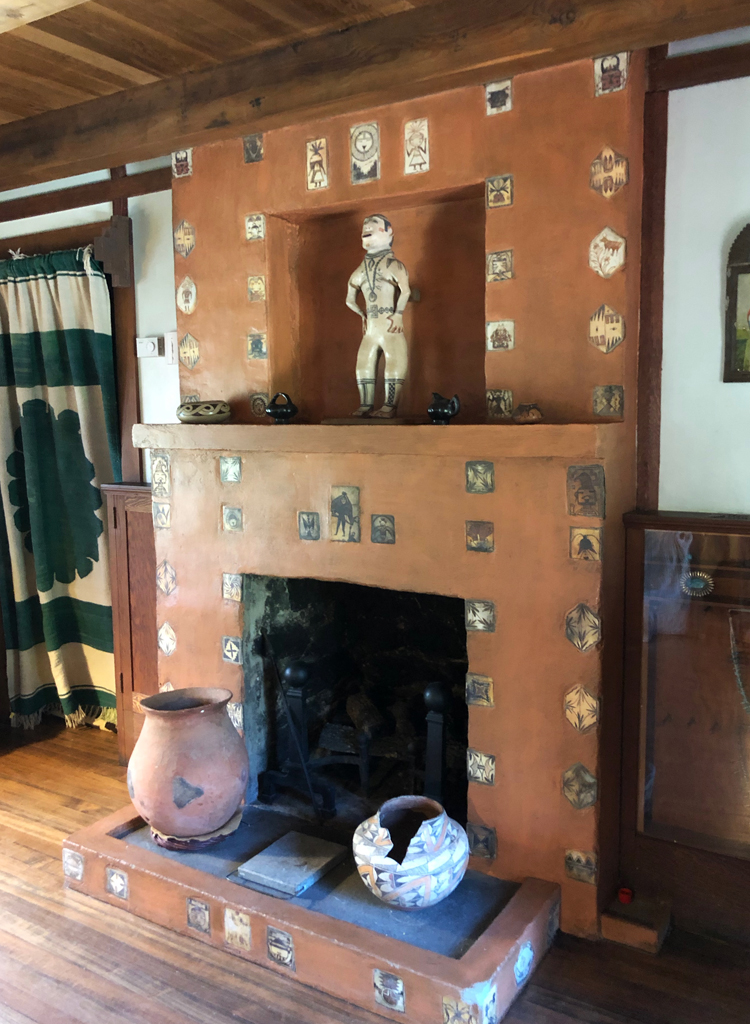 Josepha married an Episcopal clergyman named Charles Winfred Douglas. He was world-famous for his musical compositions and arrangements – religious, of course. Ole Jock built a chapel on the third floor. It’s octagonal and very richly detailed: 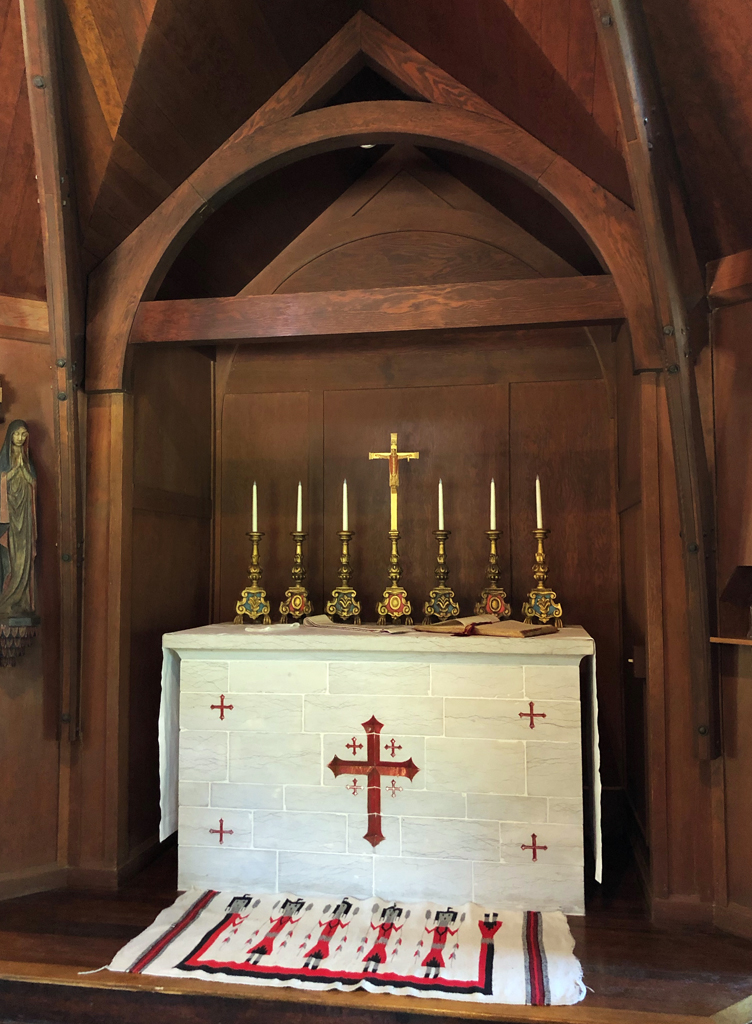 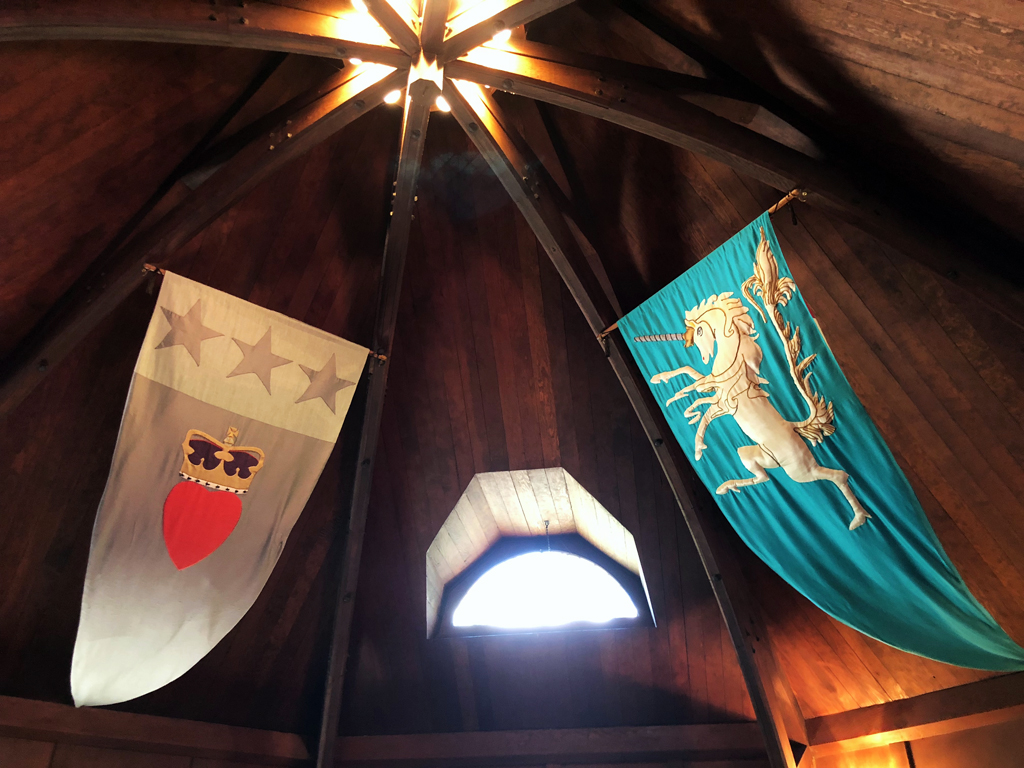 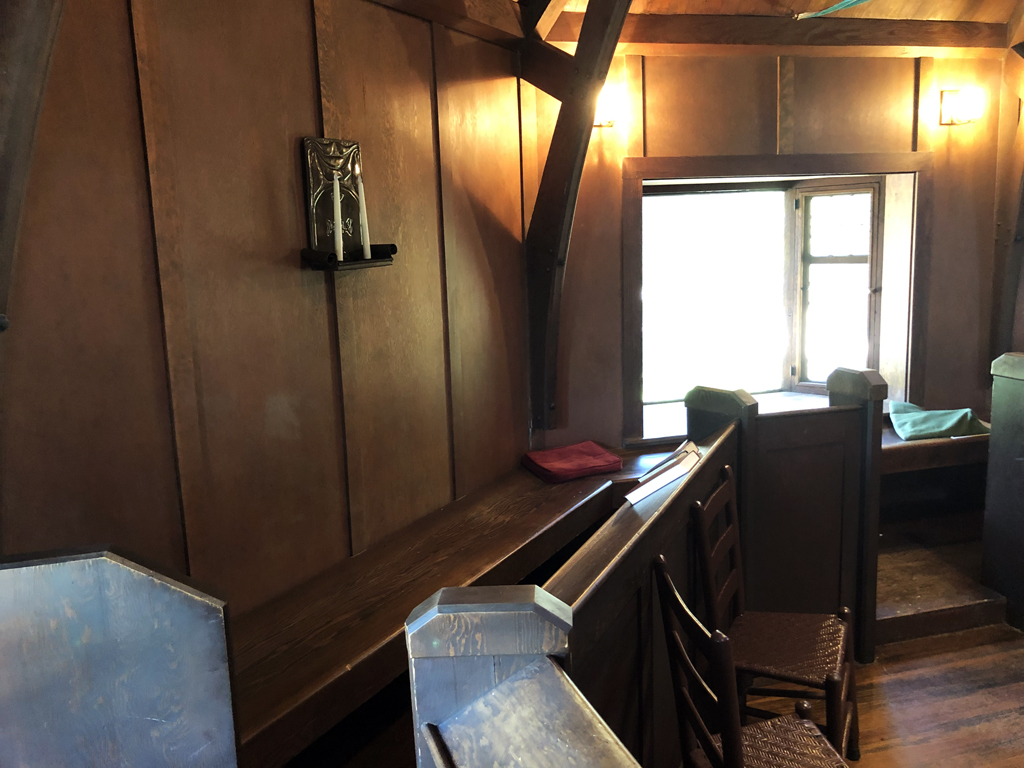 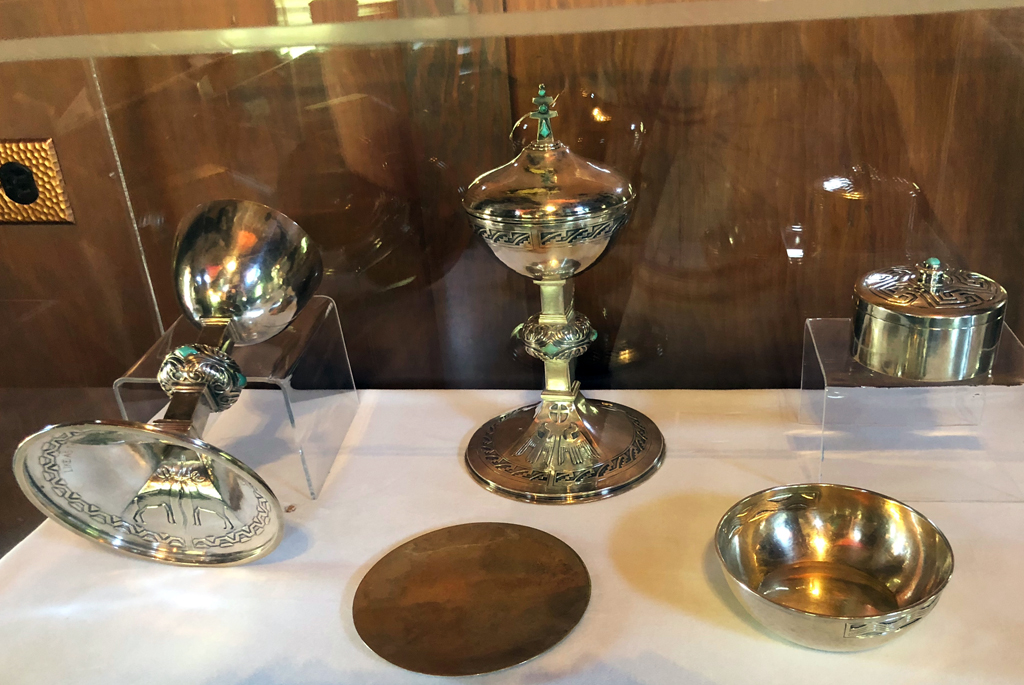 And of course he had an organ installed there because he held regular services for family and visitors: 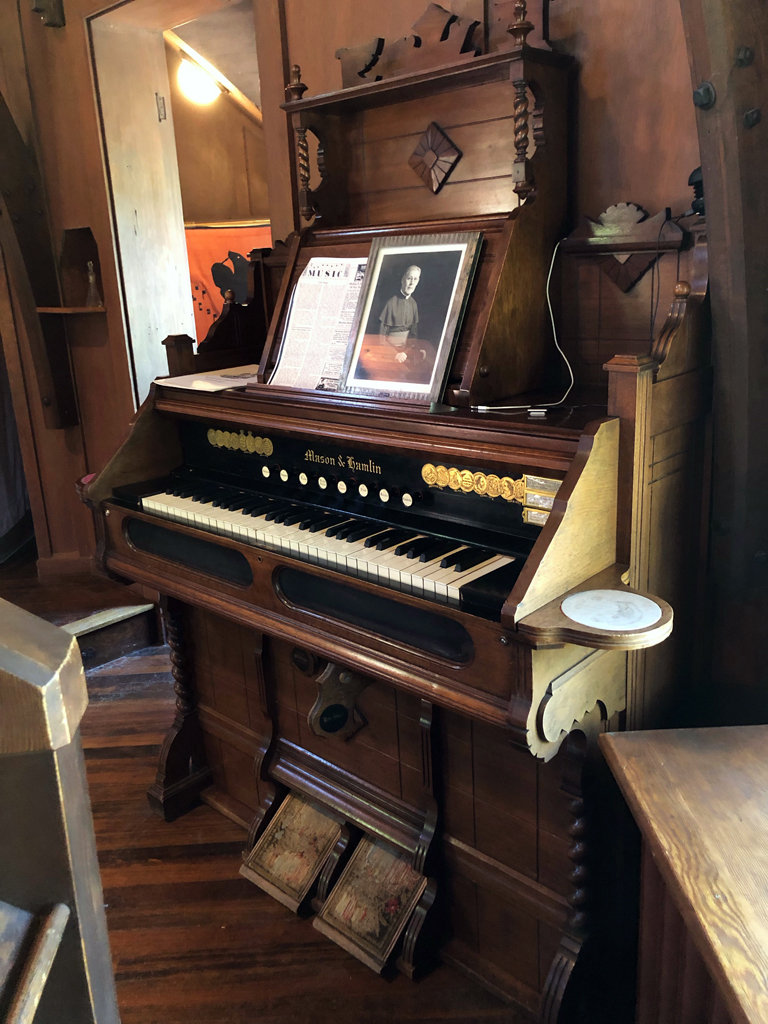 This is where he worked: 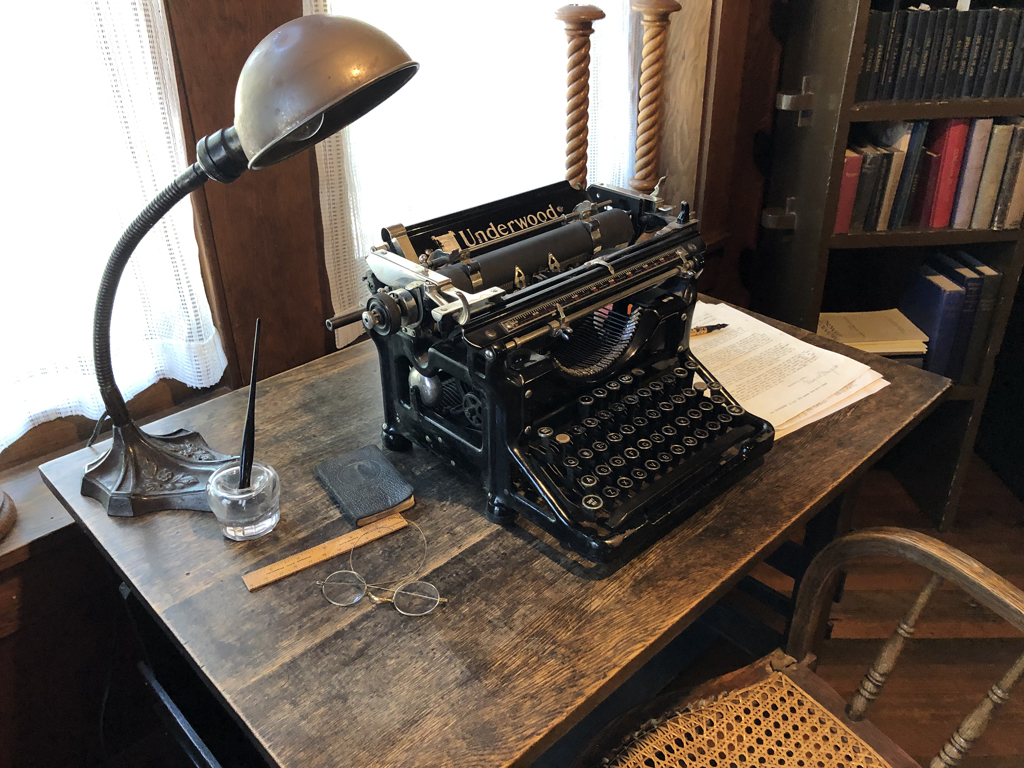 After he died, the property was sold to an oil man named Buchanan. His wife renamed the place Hiwan Ranch. Their Hiwan Hereford cattle became well-known for their quality and won many awards.

The house and property were home to six generations of prestigious families over the years. It became a museum in 1974. It’s certainly worth a visit to see how people lived back in those days.

The grounds also include a general store: 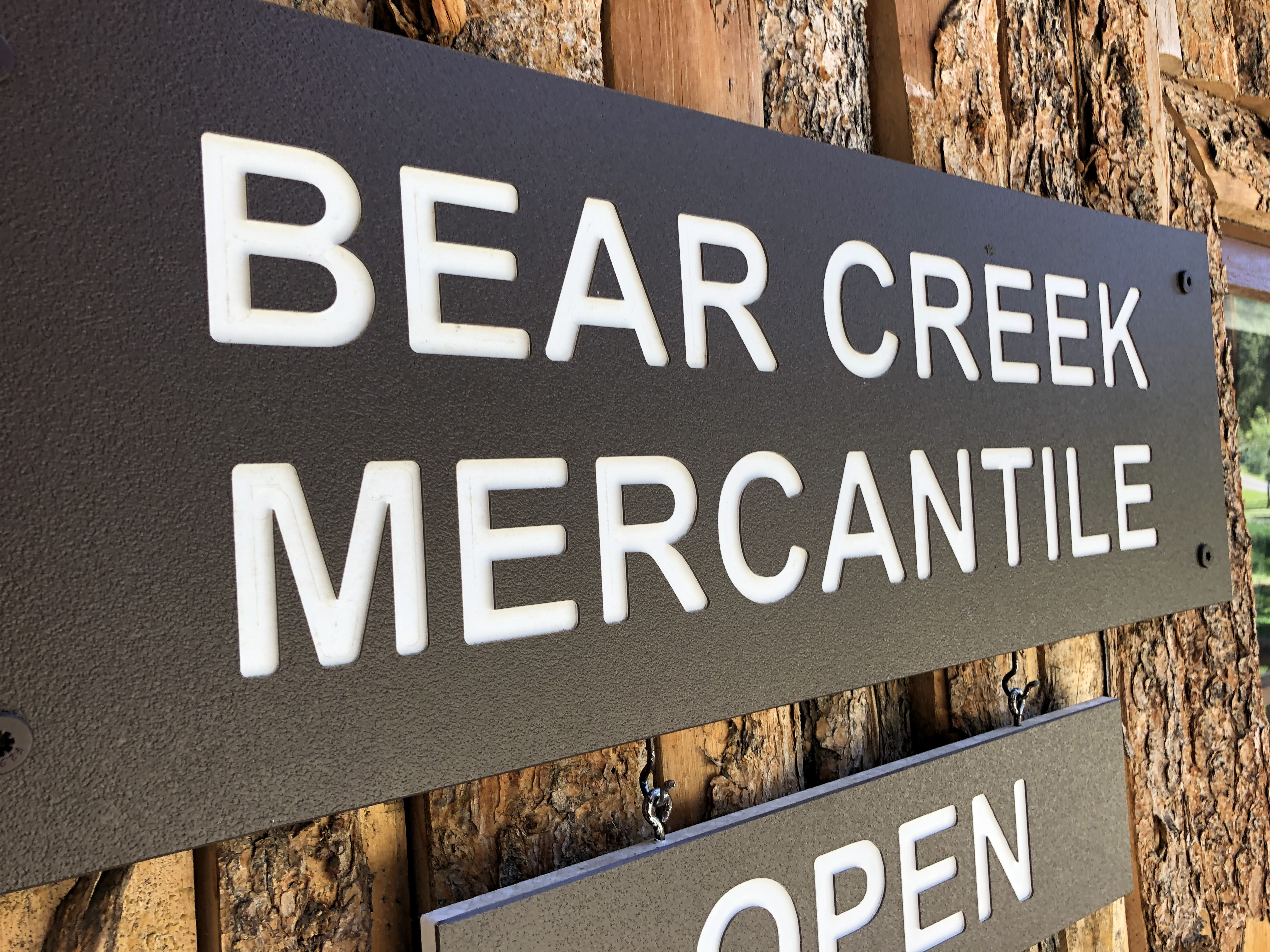 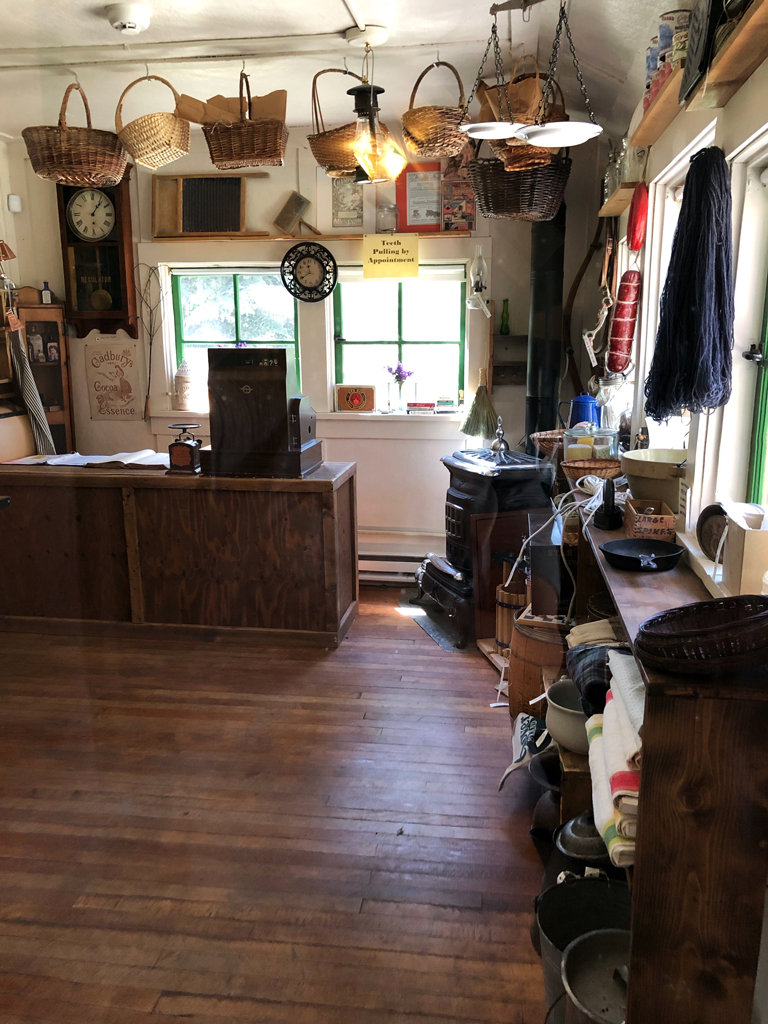 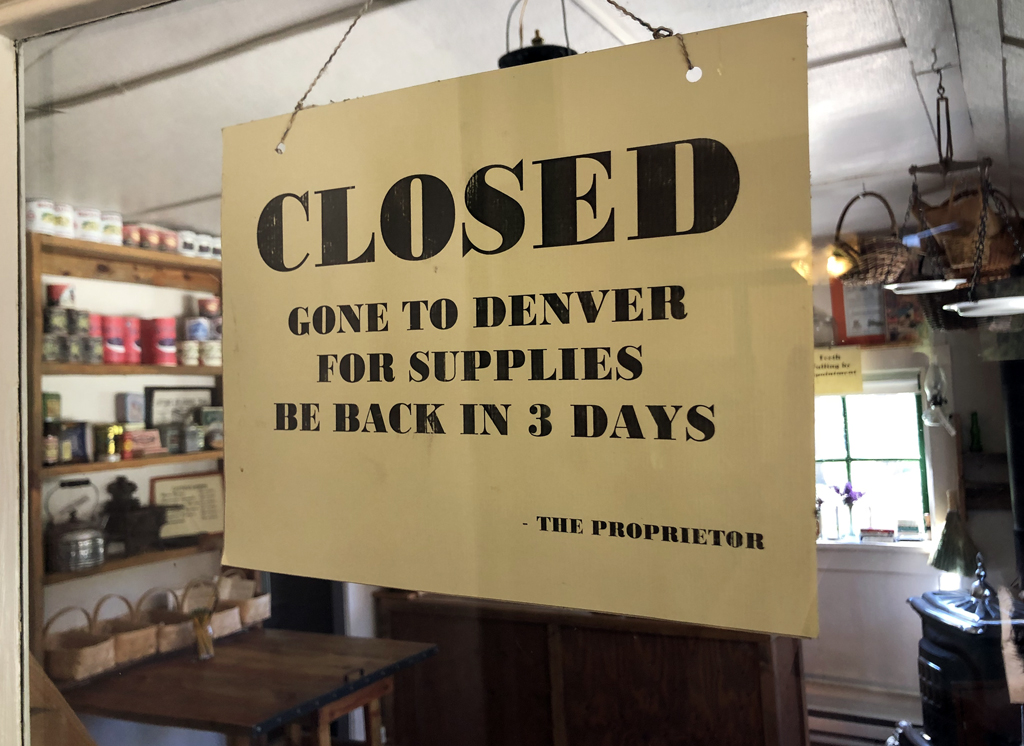 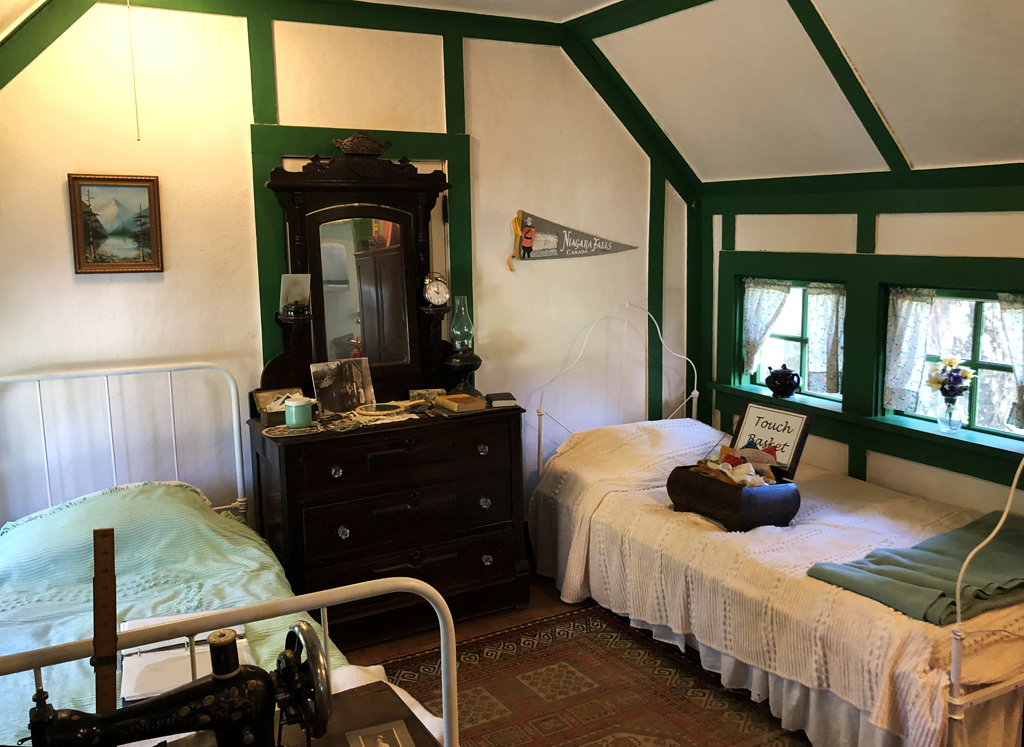 And several other buildings, including a workshop, a house for one of the sons, etc. See last week’s post for pix of those.

The Hiwan Homestead Museum is only about 30 miles west of Denver and is fairly easy to drive to using the Lariat Loop Scenic Byway route. The museum is open Tuesdays through Fridays from noon to 4:00pm, and on Saturdays and Sundays from noon to 5:00pm. Admission is free and you get a well-informed tour by a volunteer guide. 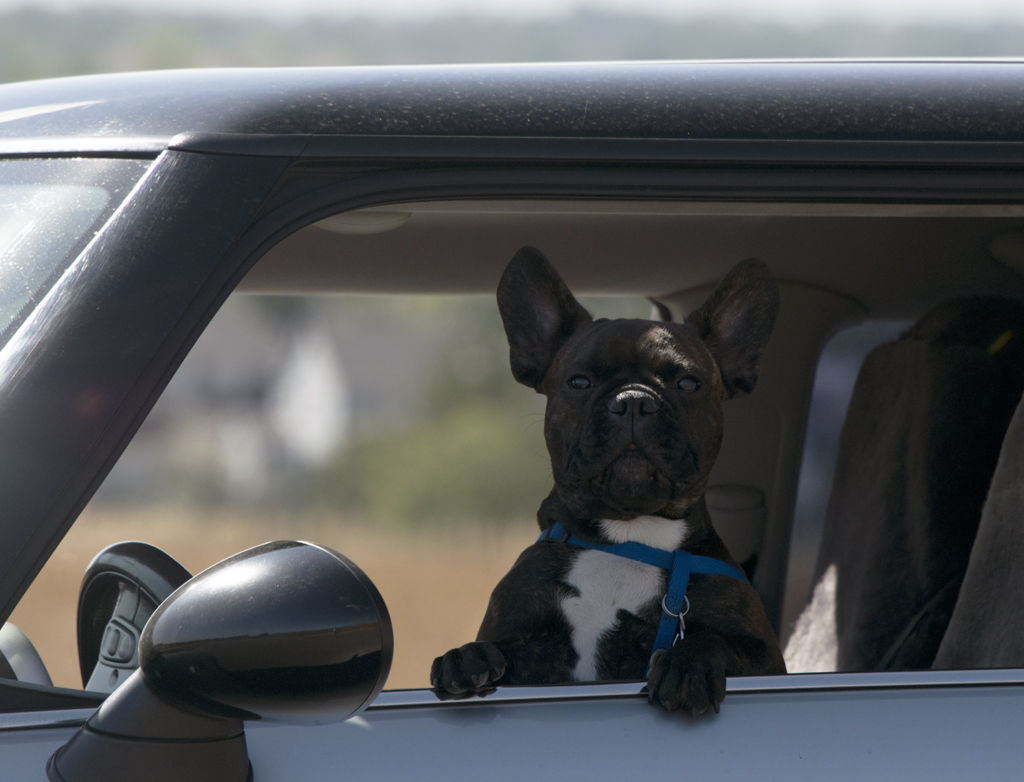 1 thought on “Hiwan Homestead Museum in Evergreen, Colorado, near Denver”