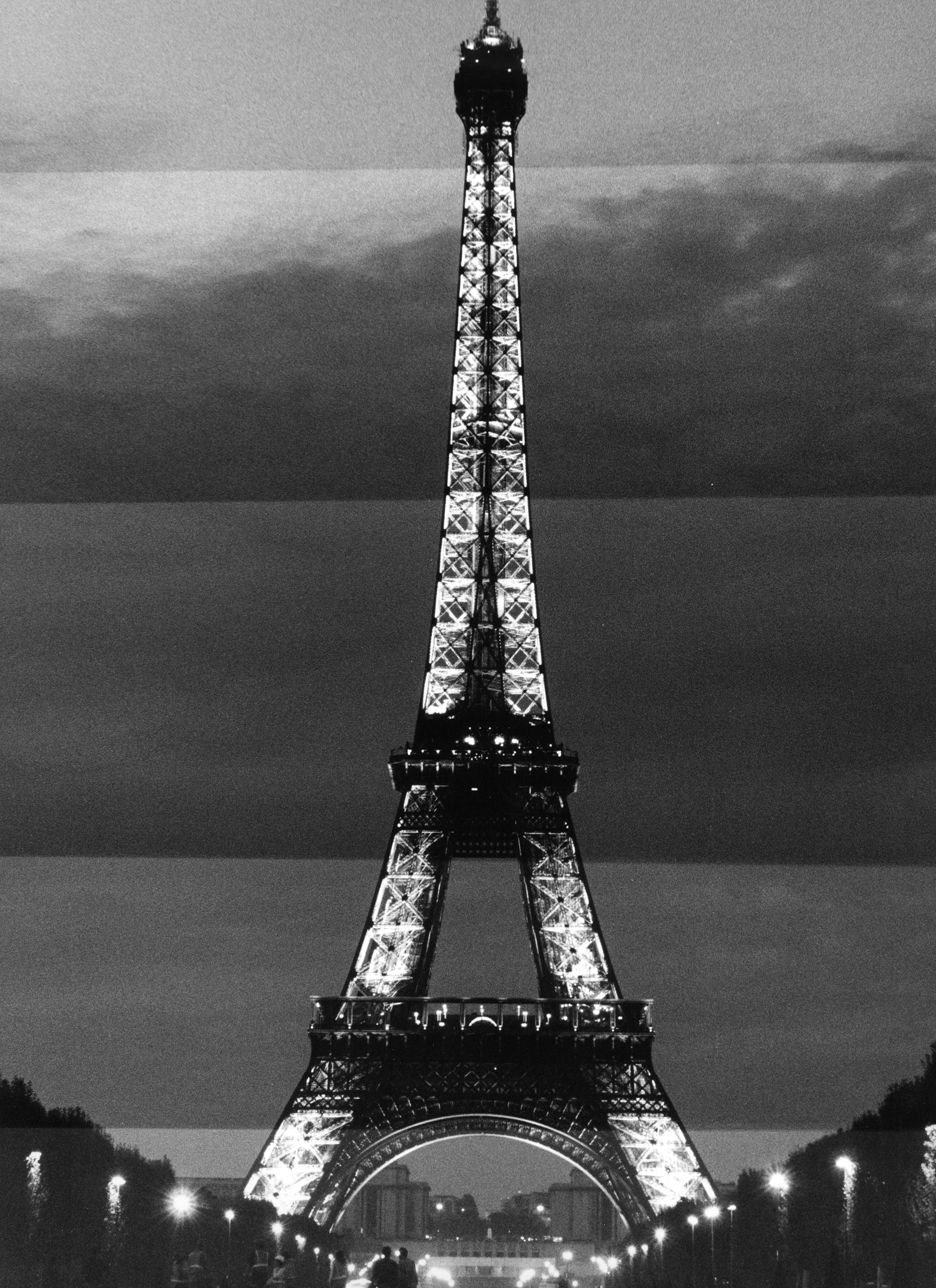 COLLECT ALL FOUR of my PFNAR books – click here!

A short, braggy post about my trip to Paris with photos from the day we journeyed to the top of the Eiffel Tower. You know the Eiffel Tower, so I won’t have to give you much of a backstory there.
For a little perspective, I will say it opened in 1889 after two years of construction as part of the World’s Fair. Think of it: only 24 years after America’s Civil War this iron behemoth was created and still stands. Thomas Edison visited the engineer, Alexandre Gustave Eiffel, in his office on the top level of the Tower after it was built.
The Tower was closed to the public only once, from 1940 to 1944, during the German occupation of France in WWII. Seems the French cut the elevator cables as the Nazis rolled in. We are fortunate that a German general ignored a command from HQ to destroy Paris on their way out.

Except for the cables, the original elevators didn’t have to be replaced until 1982. Although there are stairs all the way to the top, the public can only use them as far as the second level above ground. We opted for the elevators. Once on the second level, you have to take separate elevators to get to the top.

I visited Paris for the second time (touch me!) back in 2004 when I was still shooting black-and-white film. Here’s a shot of the Tower at dusk:

And my absolute favorite shot of the Tower I ever took, which barely even has the tower in it: 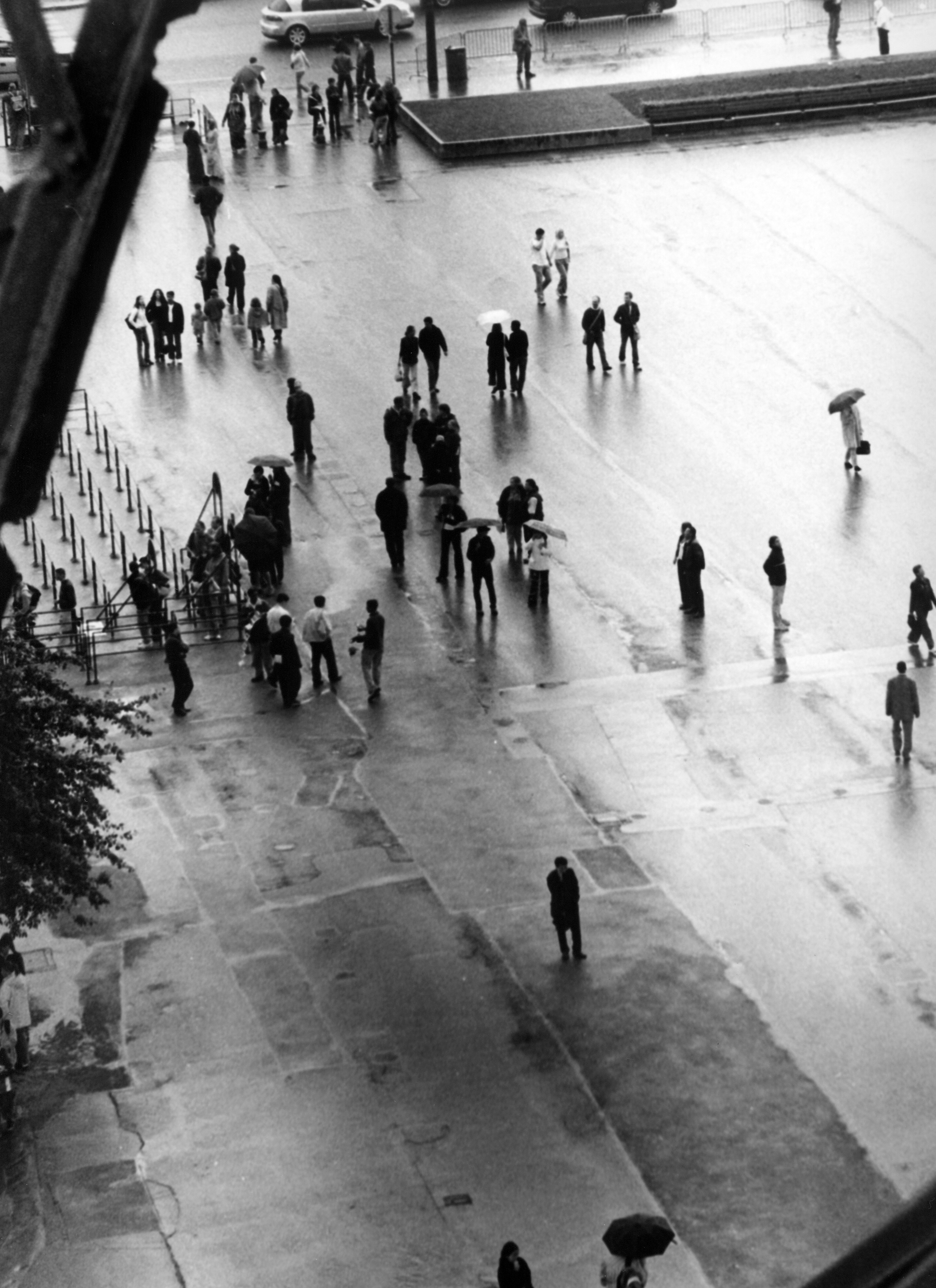 After my third trip to Paris (2011), the glass floor you can see in the photo below was installed on the first level above ground in 2014. The other major change I saw was that now you have to pass through a security line/metal detector to get into the Tower. The bags are hand-checked. I’m sure it’s a response to the terrorism in Paris during the past few months. I may have been imagining it, but I think the elevators were less crowded this time around as well.

Some shots from the ground last week: 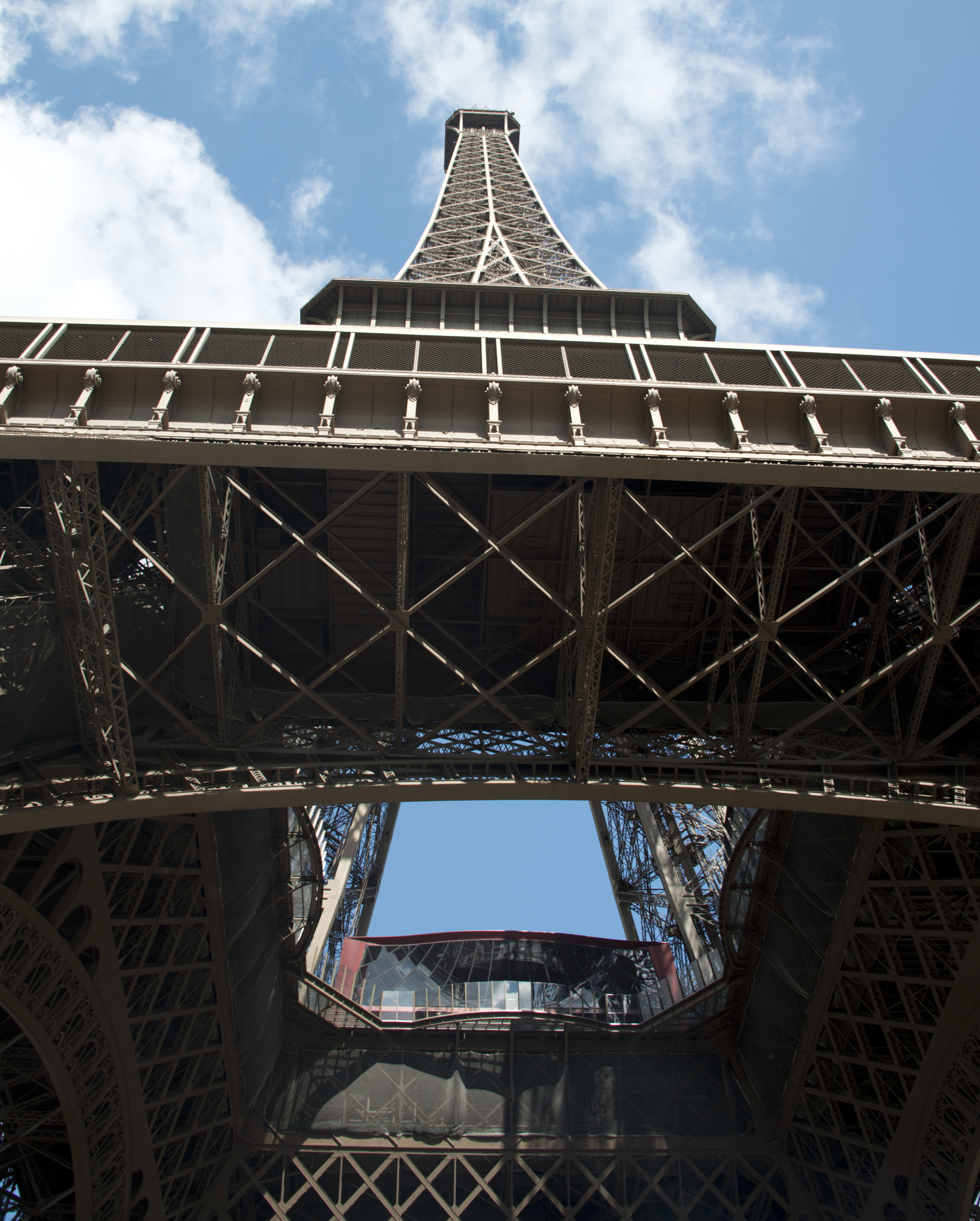 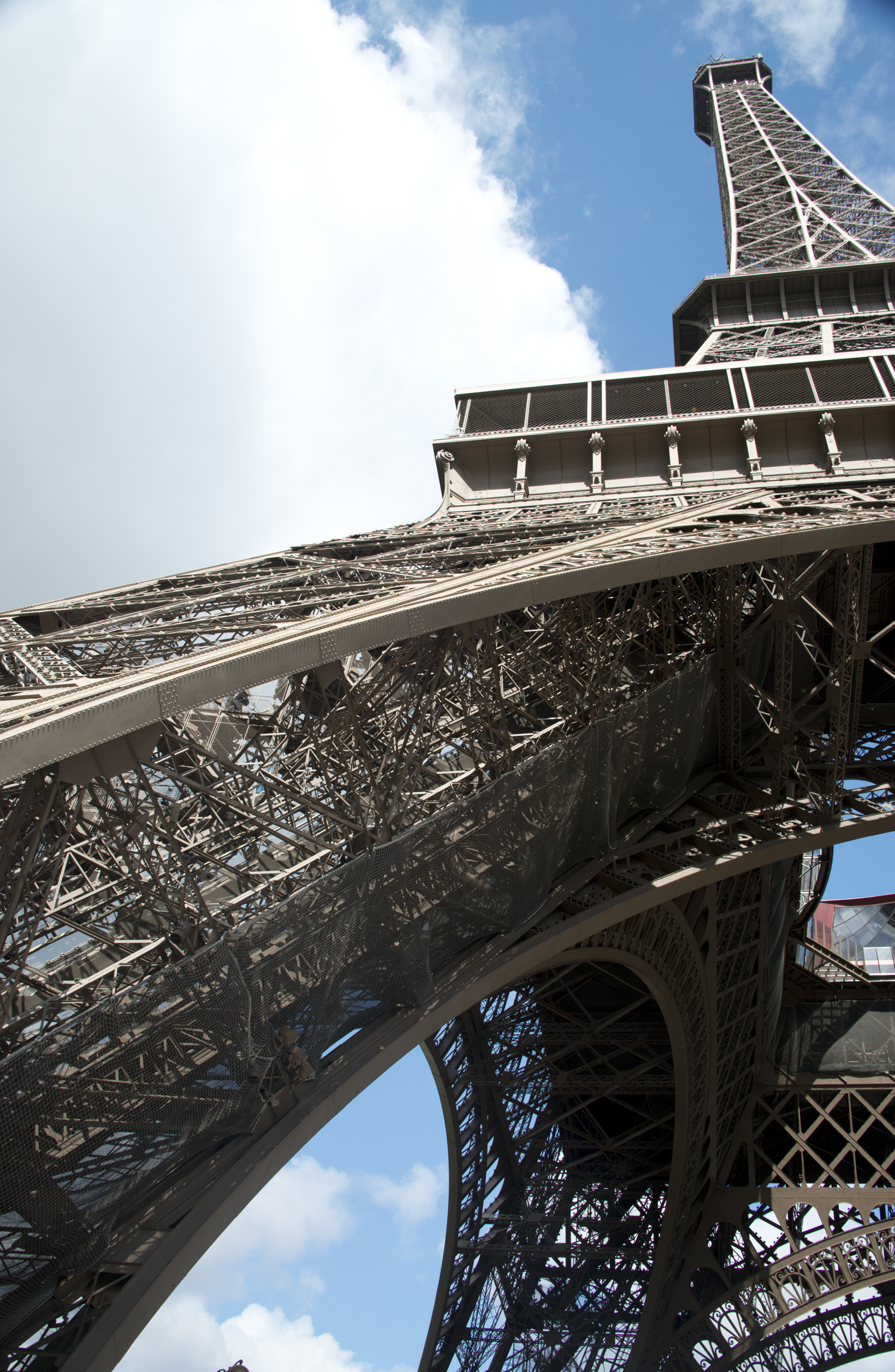 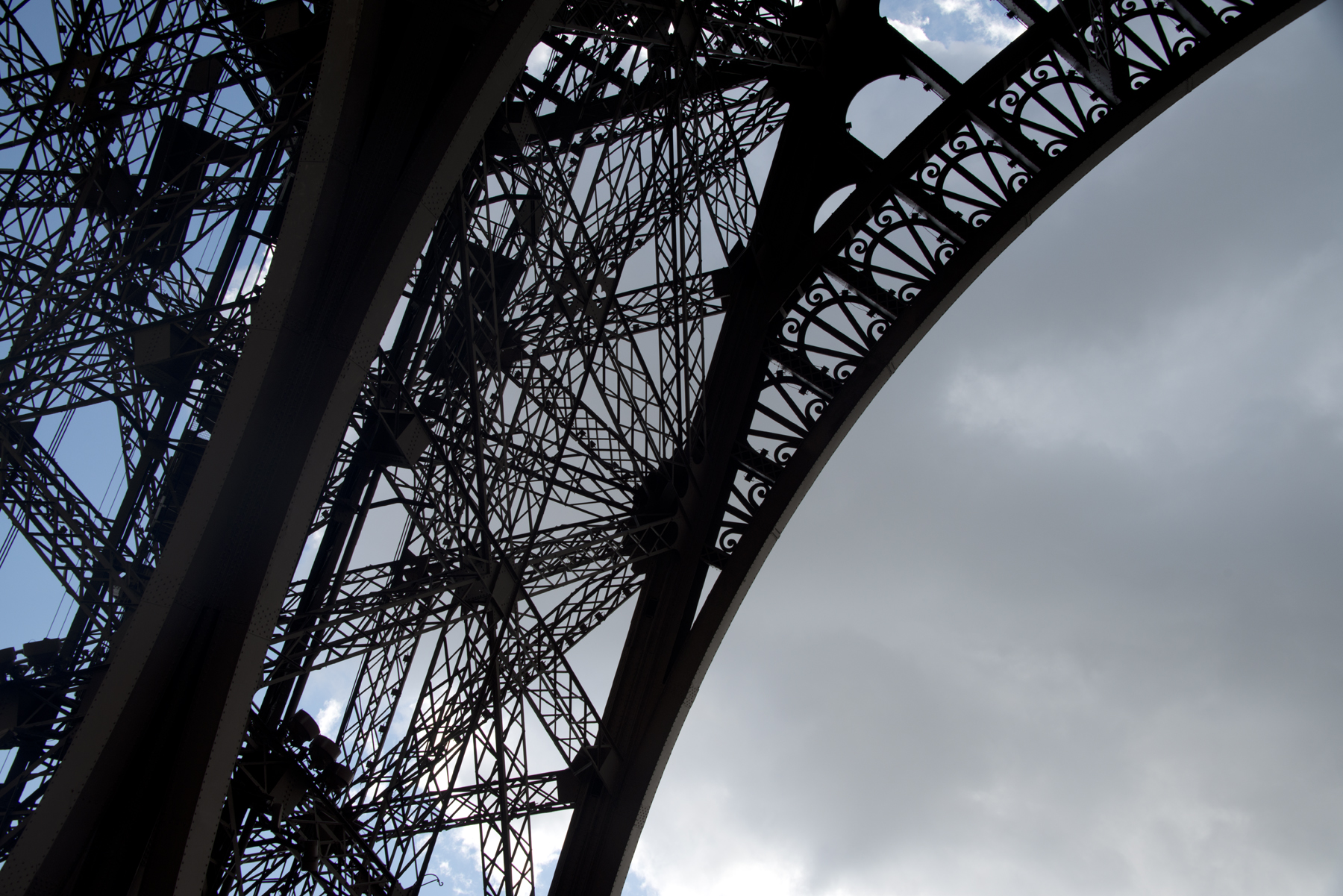 Note the great weather we had! It was chilly and breezy but the sky was perfect!

Shots from the second level: One of my favorite pictures of the day: 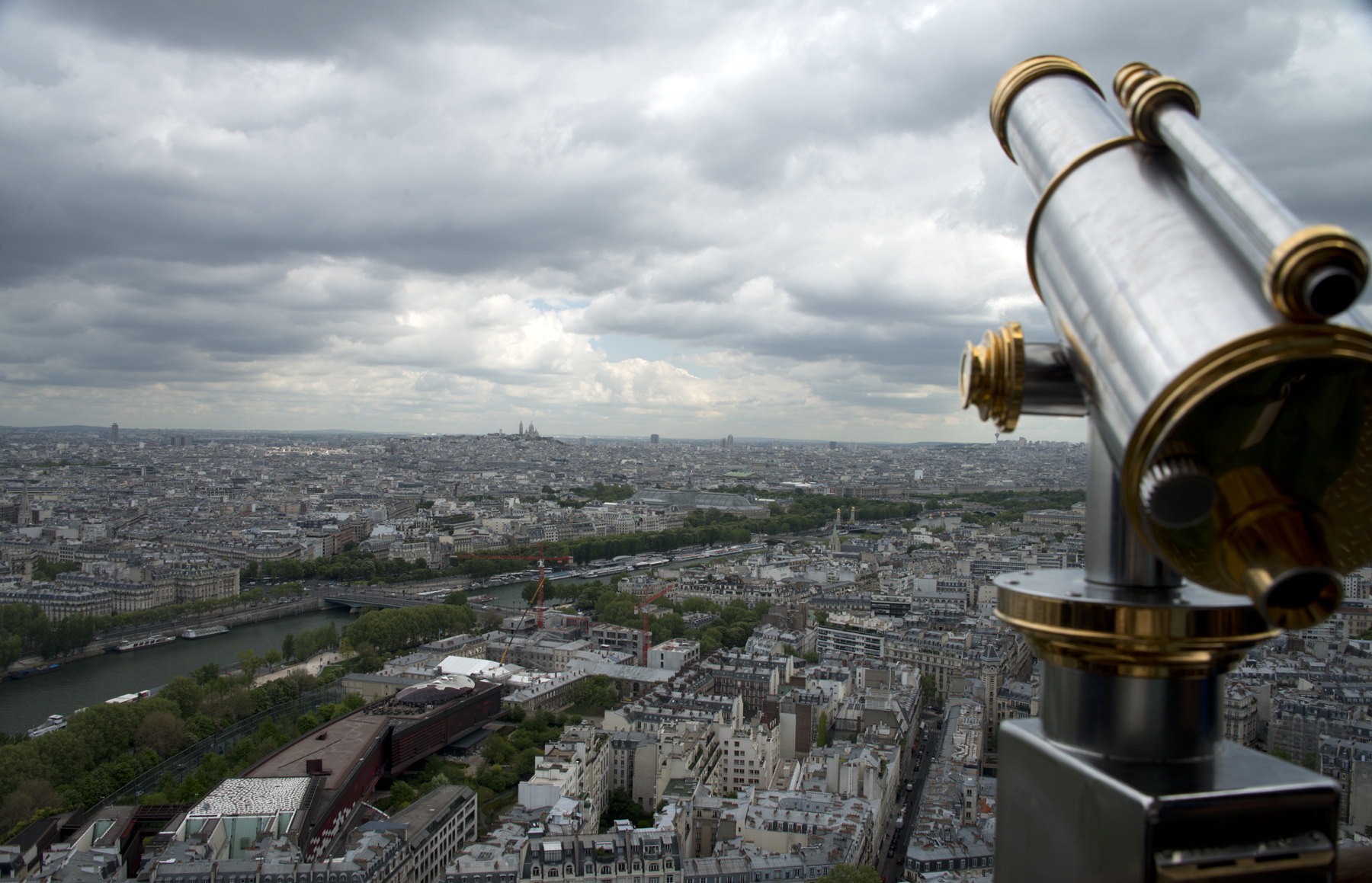 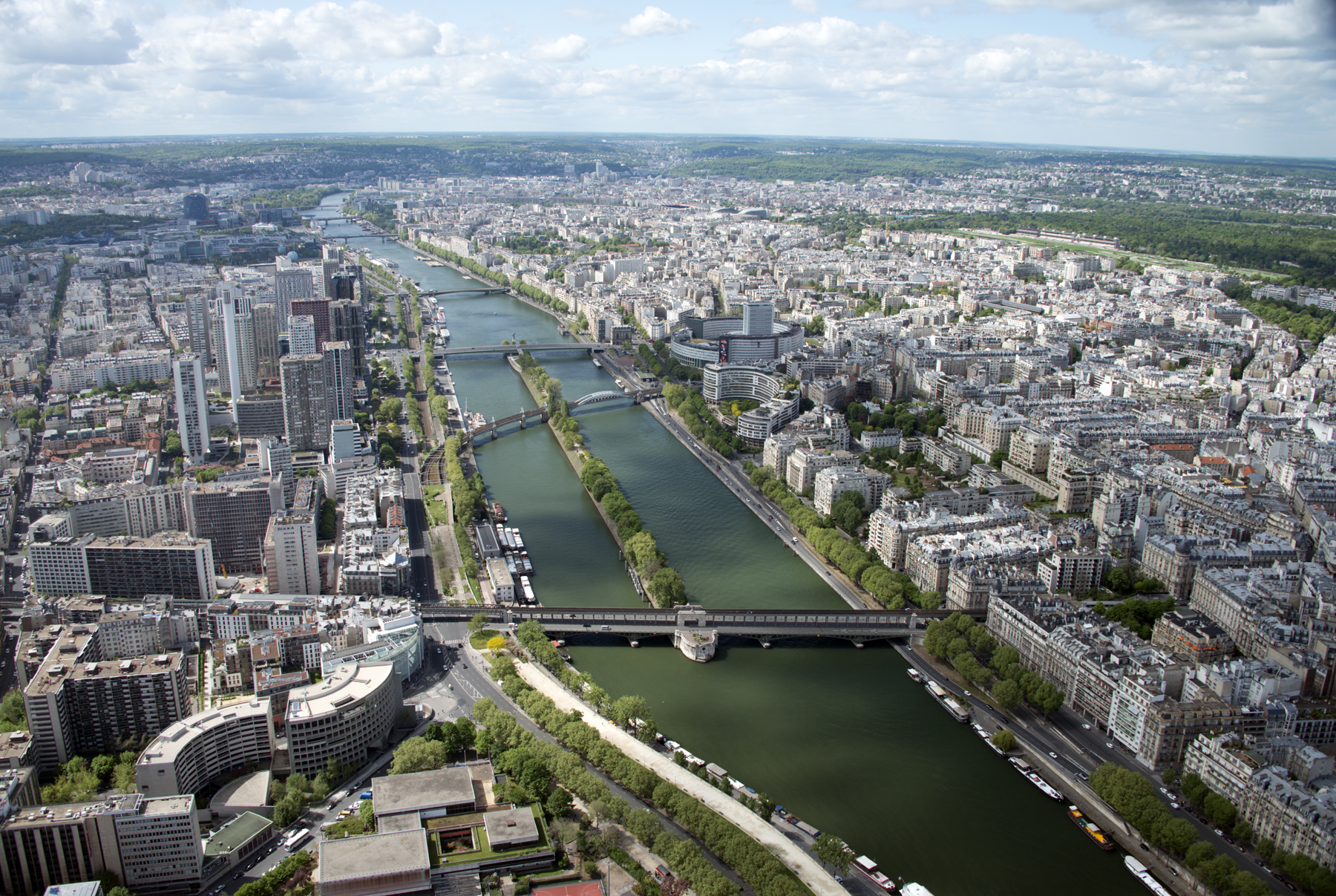 Heady, vertiginous shots from the top: 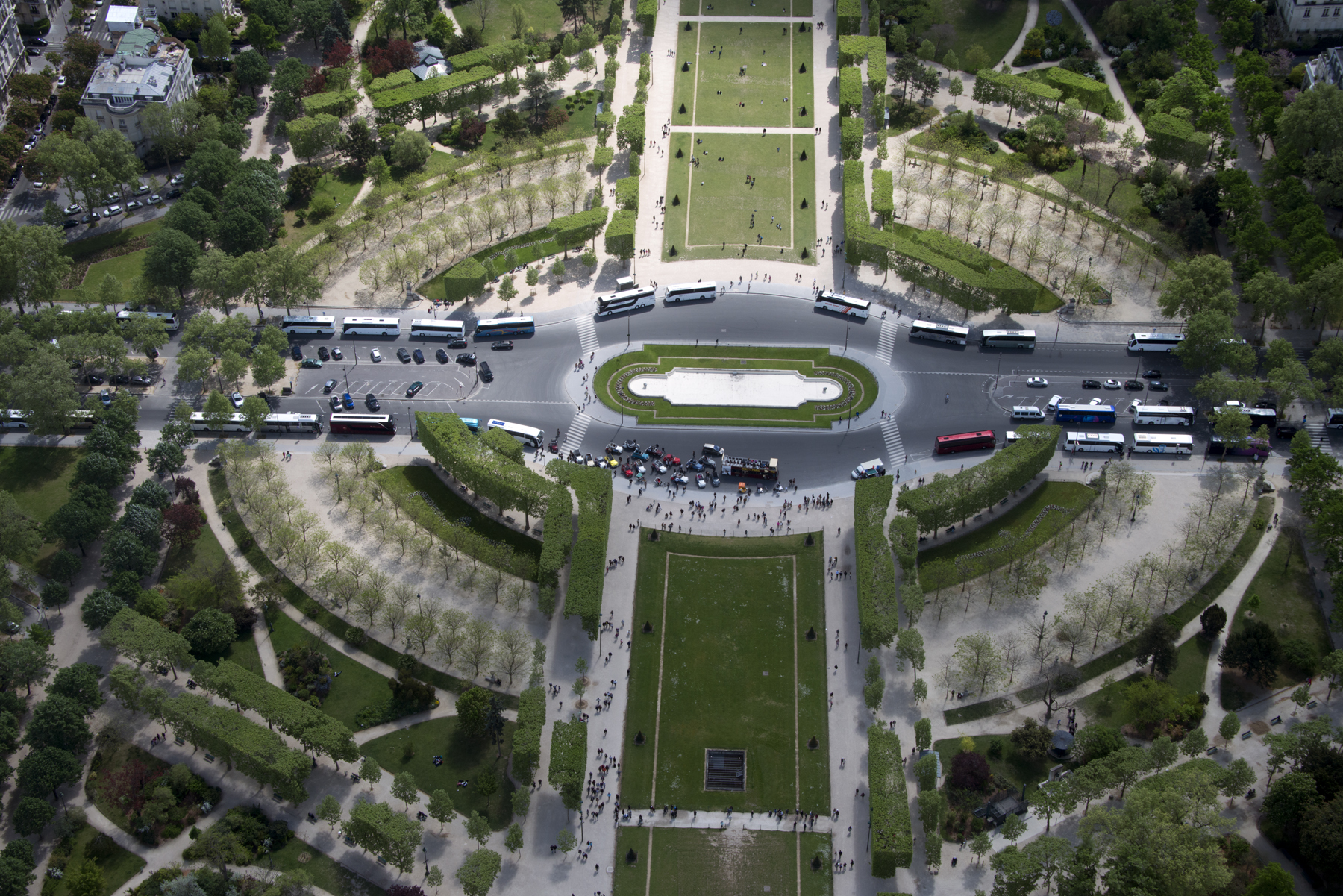 Here you can see the twelve avenues leading into the traffic circle surrounding the Arc de Triomphe. This traffic circle earned the nickname “Circle of Death” among our group during our stay. It’s a mad rush of chaos! 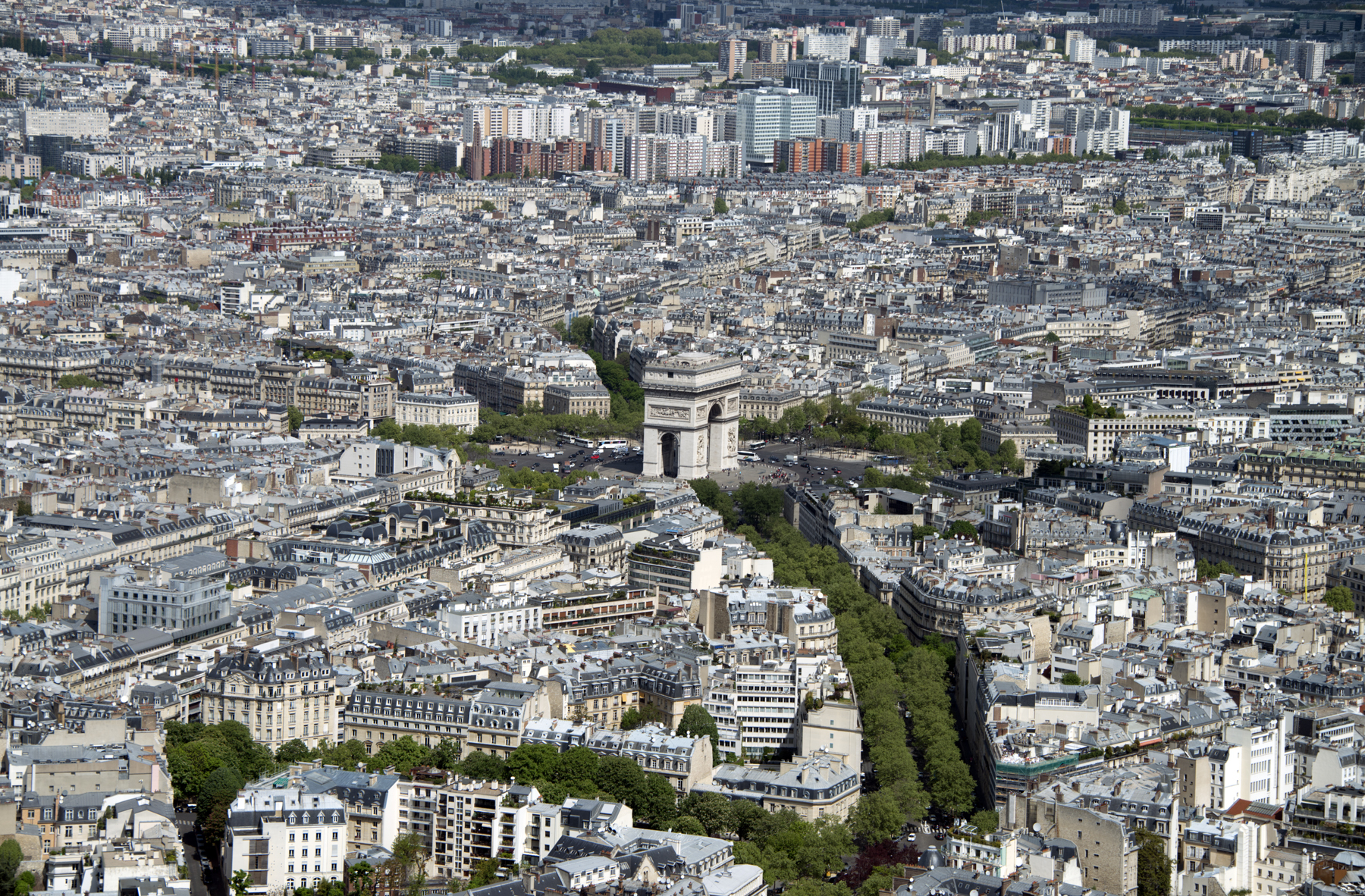 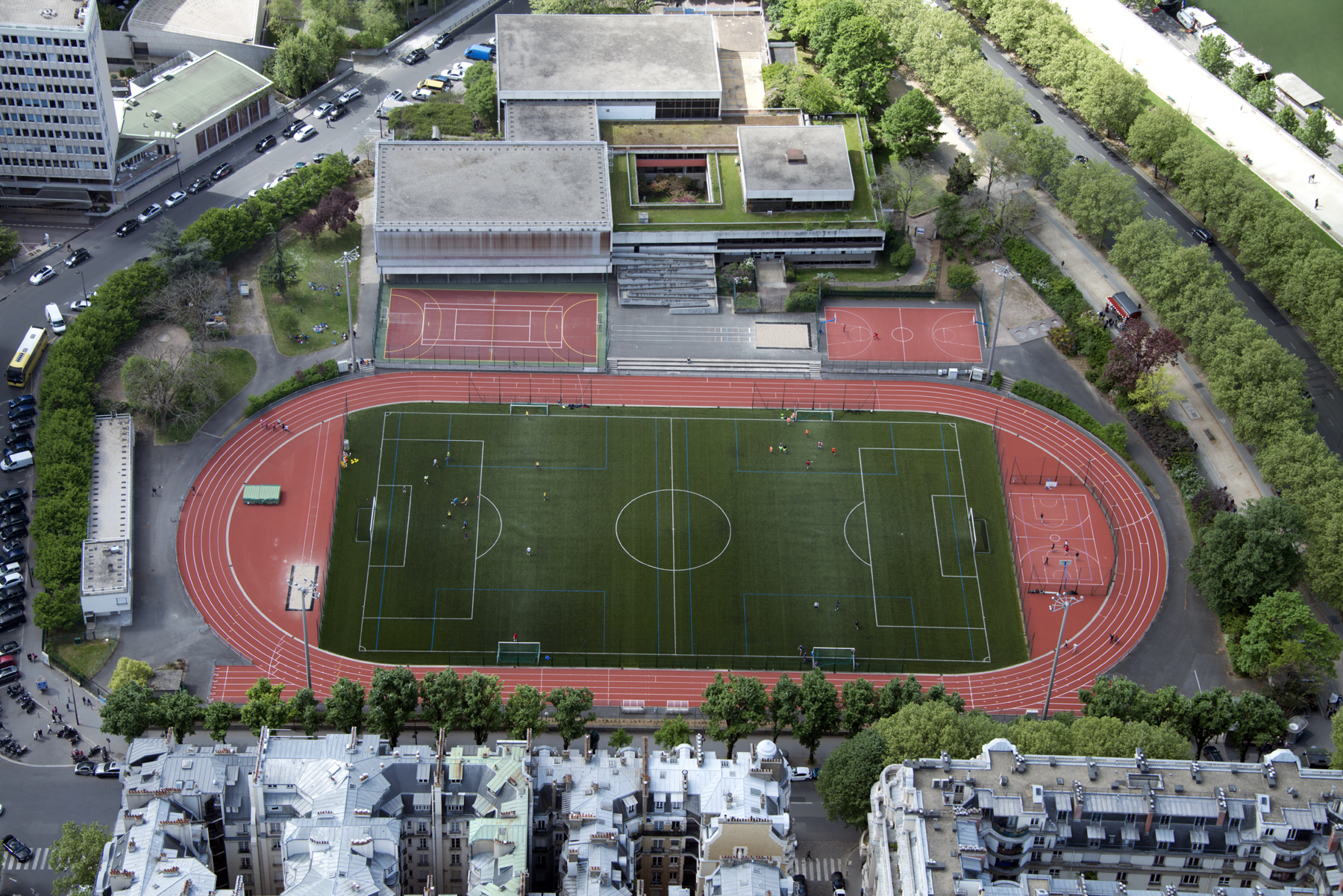 I would recommend you buy your tickets to the Tower in advance, easily done online. Otherwise you have to stand in a very long line just to get a ticket, then stand in another long line to pass security, then another for the elevators. No matter how you get there, just GO! 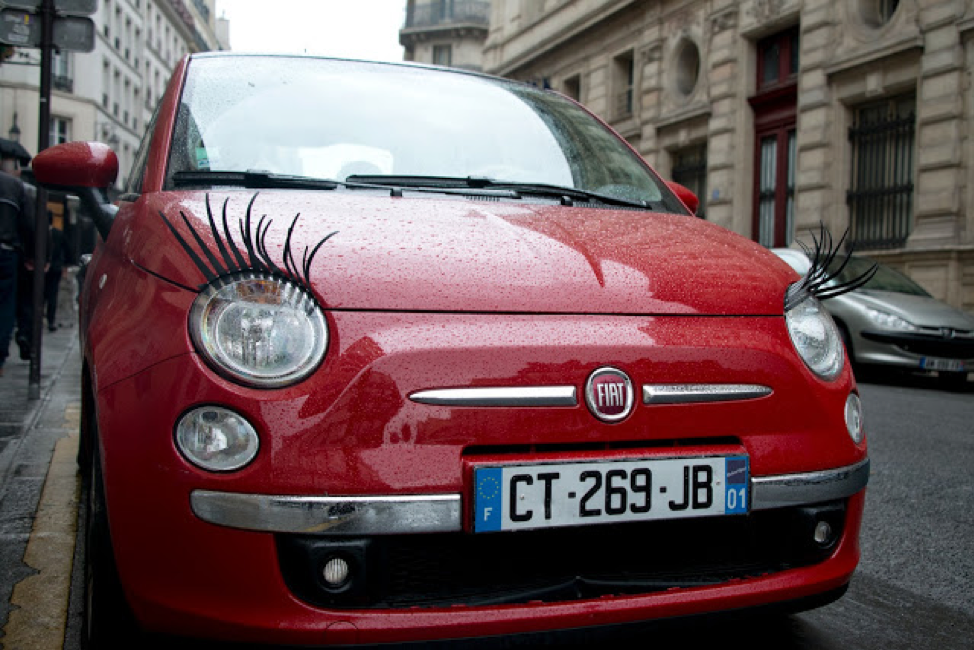