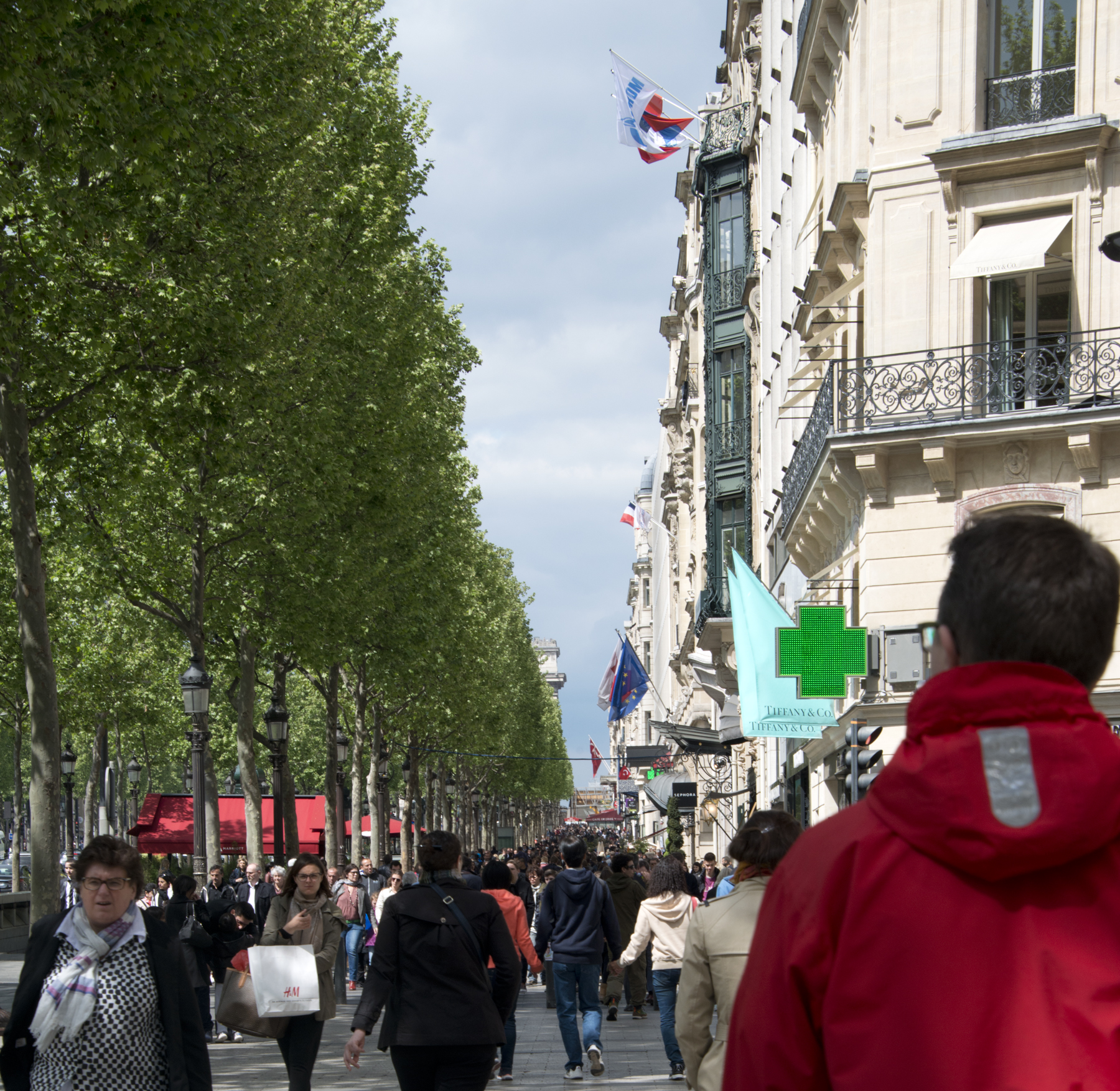 If you need a gift for someone who is studying English,

or someone who teaches English,

buy them one of my English workbooks!

As part of my English-language learning podcast, Slow American English,

I produce annual workbooks that contain all worksheets for each year, four in all – so far.

Click below and buy them one or more of the workbooks on Amazon.

Today I want to share some photos I took when my husband and I took a walk down the Champs-Élysées, one of the most famous streets in the world, and definitely one of the most well known streets of Paris.

We started out at the Louvre Museum. 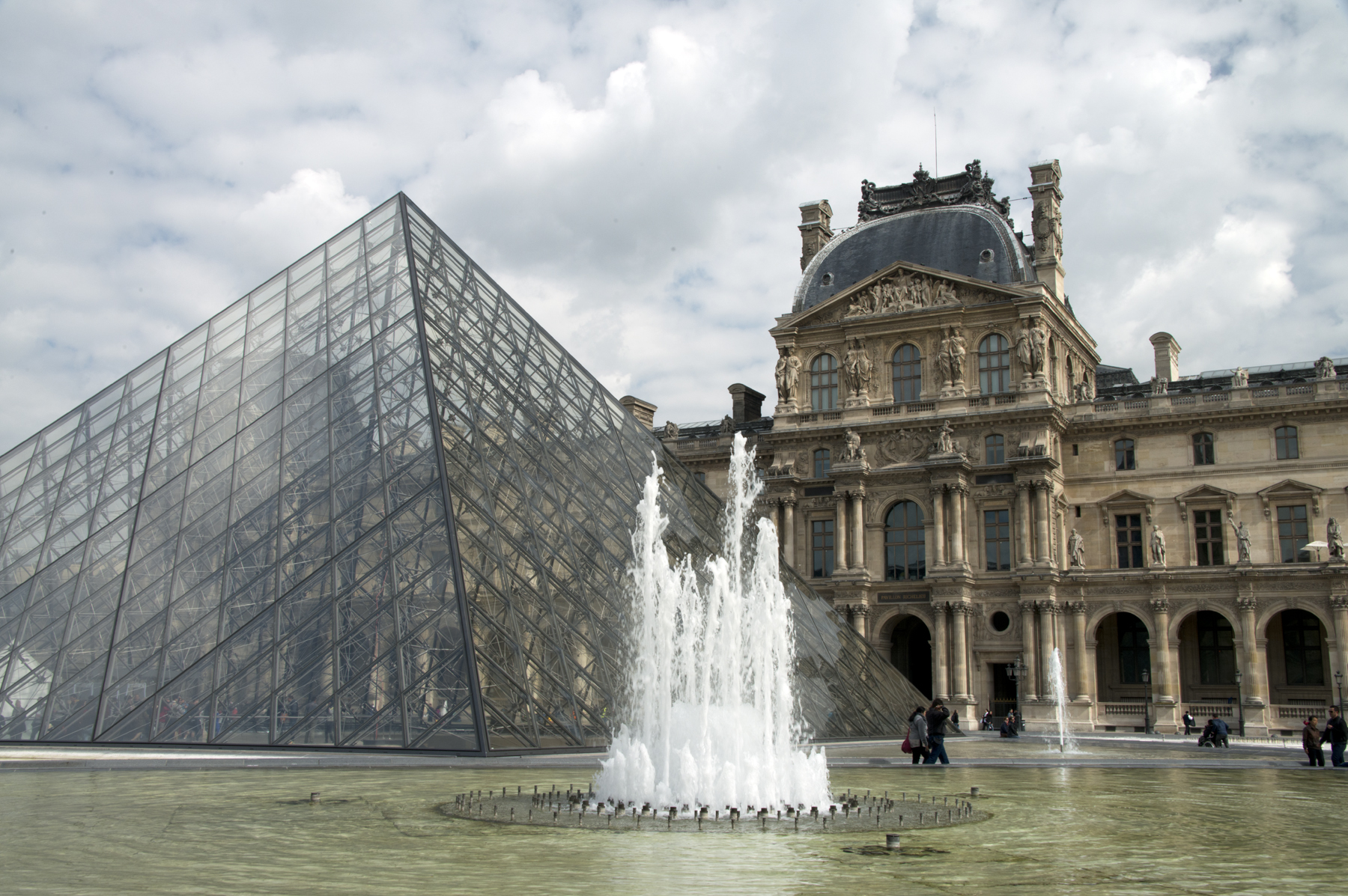 The Tuileries Garden is a big, beautiful public park. It was built in 1559 by Catherine de Medici when she was queen to France’s Henry II. At the time, the Chateau of Tournelles across town was the king’s residence. After Henry II died, Catherine moved to the Louvre with her son and built herself a separate palace, the Tuileries Palais. The present-day garden was her own backyard. It was opened to the public in 1667.

At the edge of the courtyard of the Louvre is the Place du Carrousel, an arch that is very similar to the Arc de Triomphe except much smaller. The wings of the Louvre used to extend past this part of the garden and enclose the area. 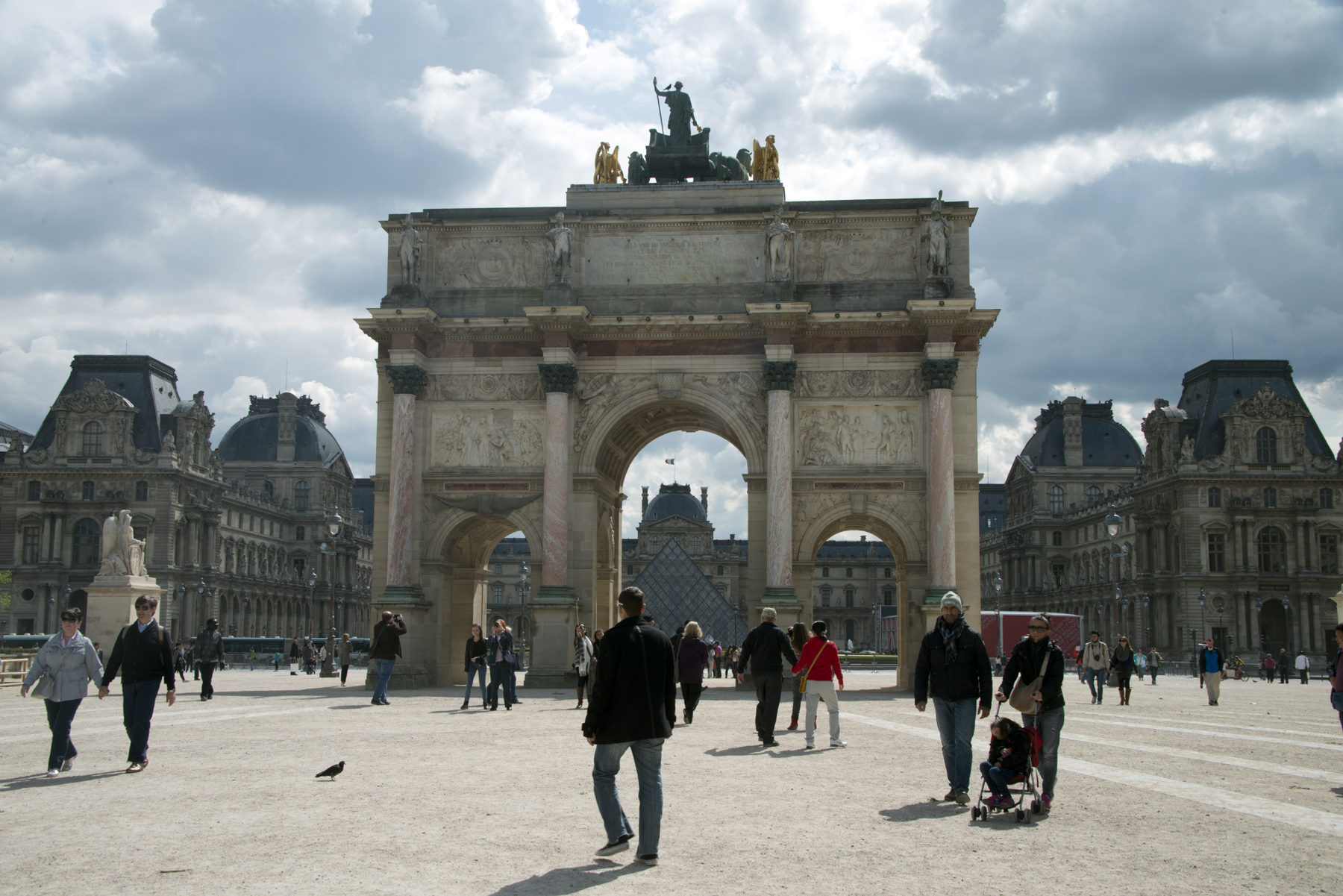 With my back to the Carrousel, I took this shot: 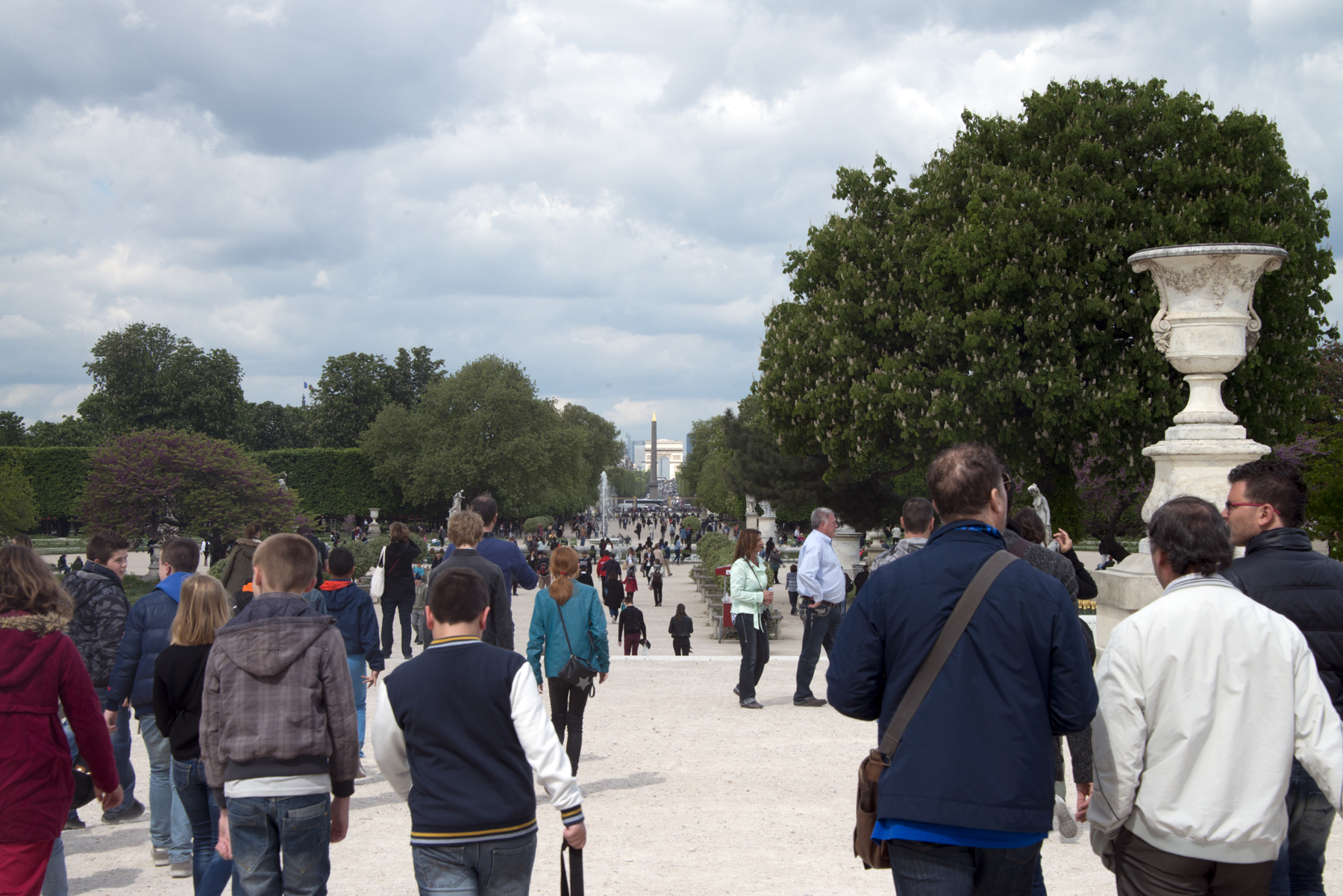 Here’s a shot of one of the side paths in the garden: 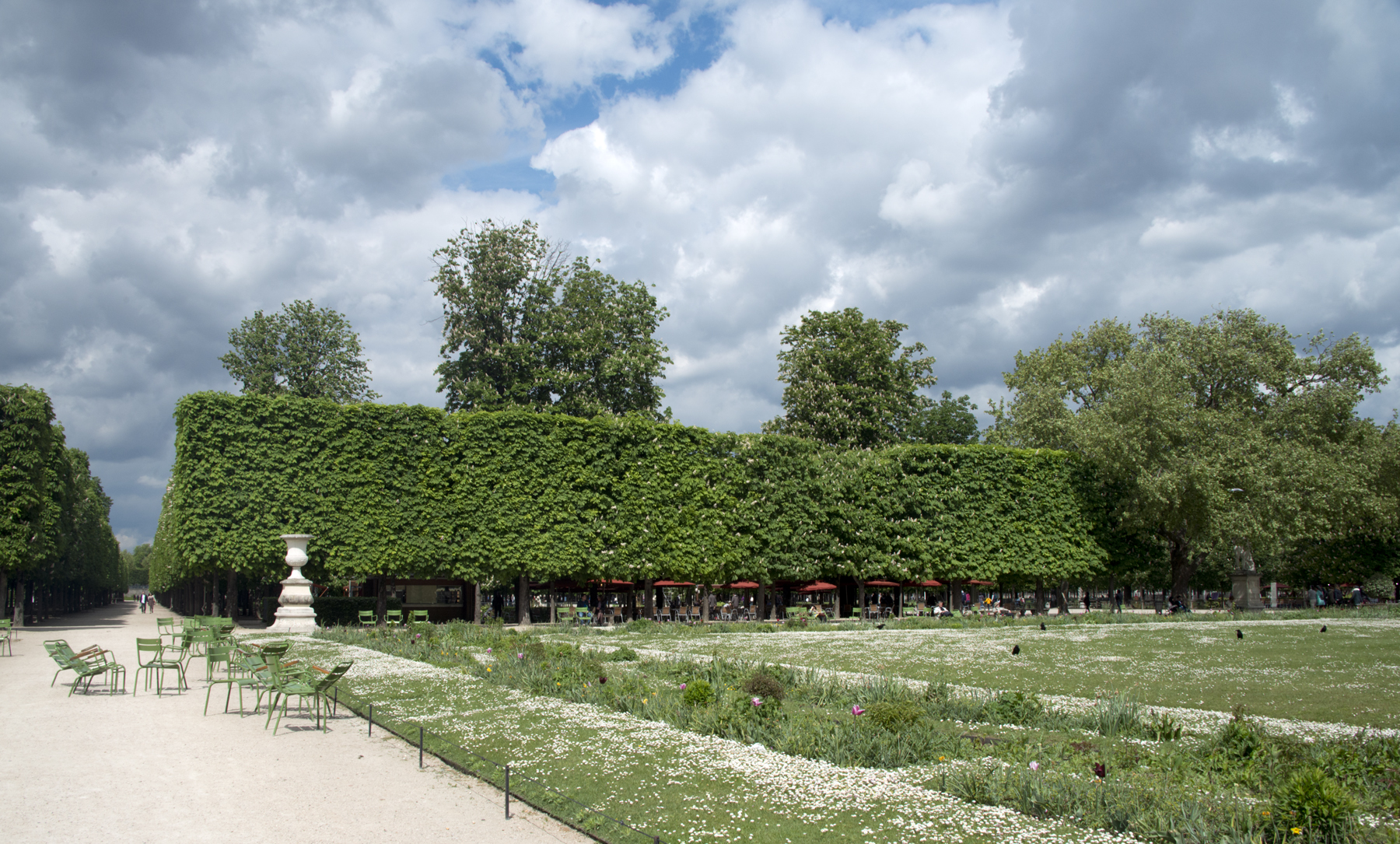 We took a break in those green chairs, which were surprisingly comfortable considering they were metal.

Those big, boxy hedges in the garden are chestnut trees, trimmed by heaven-knows-what kind of machine! Here’s a chestnut that was in its natural shape: 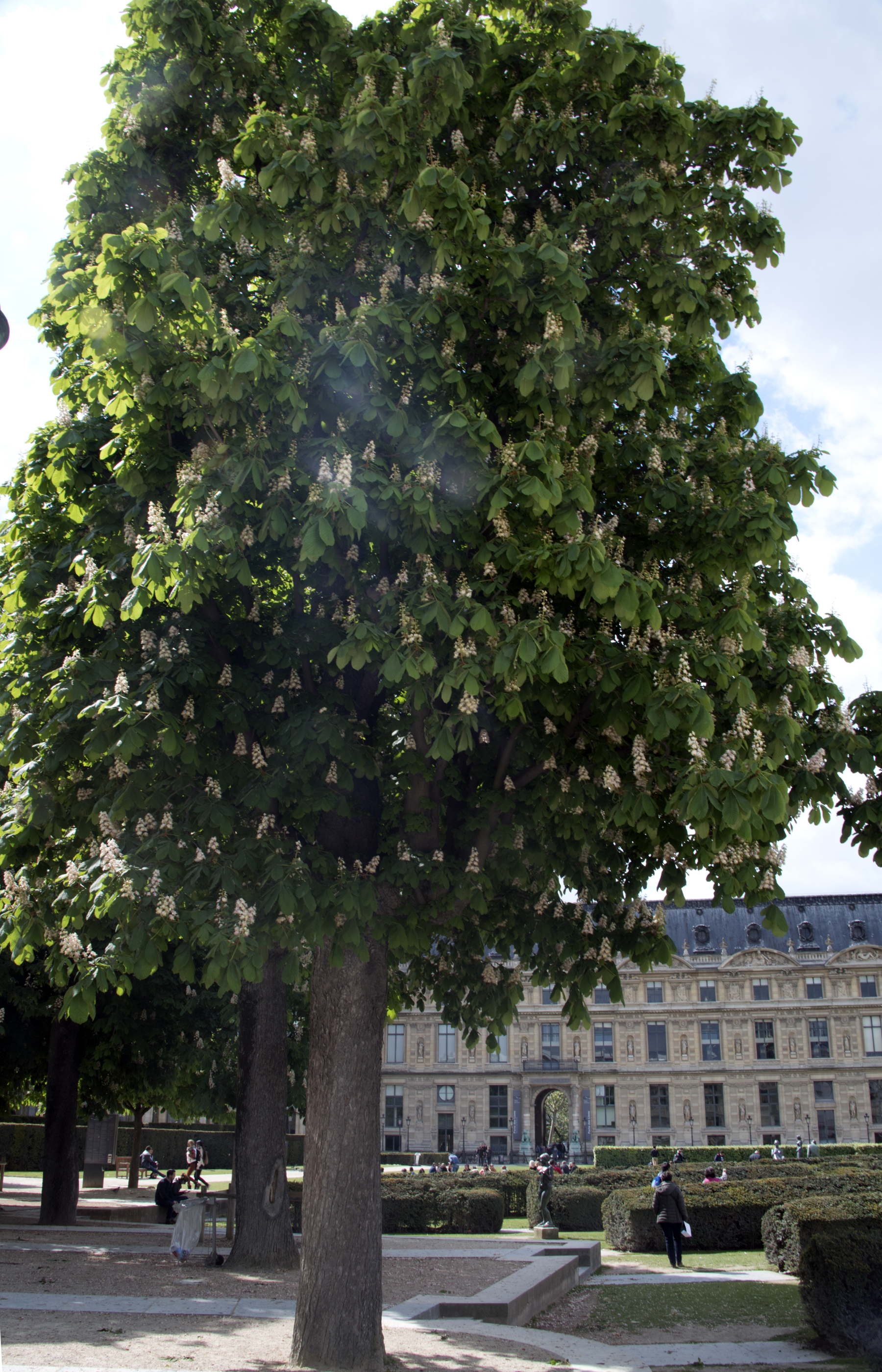 You may remember from my Maibaum post that this is the official tree of German Biergartens. Well, the German trees have got nothing on the French ones! They are huge!

Once we reached the Place de la Concorde, I was able to get a closer look at the obelisk, which was a gift from Egypt to Napoleon: 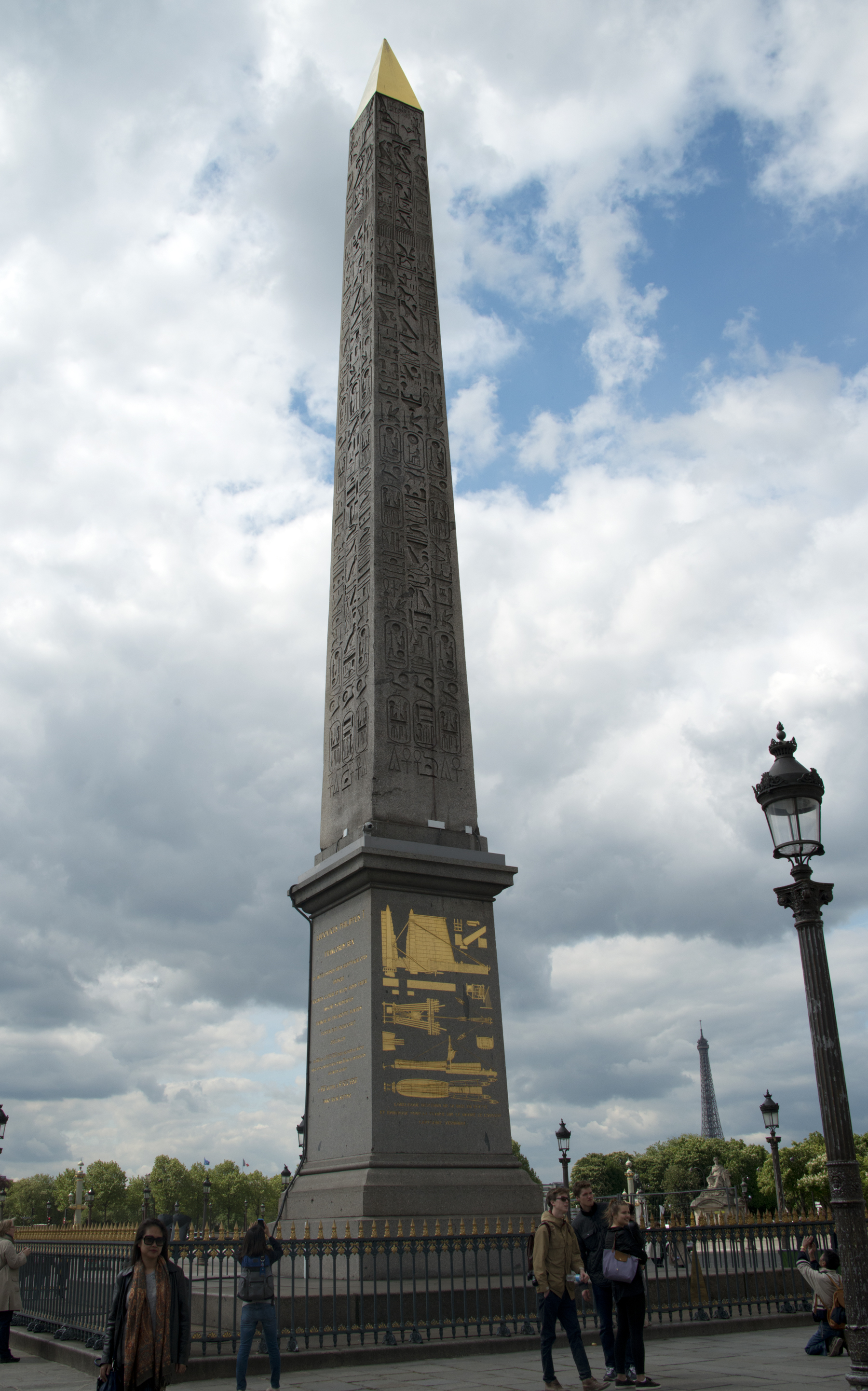 The gold inscriptions on the base are actually diagrams of how they moved the obelisk from Egypt, shipped it over the ocean, and installed it here. There were ropes and pulleys and floats and things!

One of the most interesting things about Place de la Concorde is the style of the lampposts. I love this shot with the Eiffel Tower in the background: 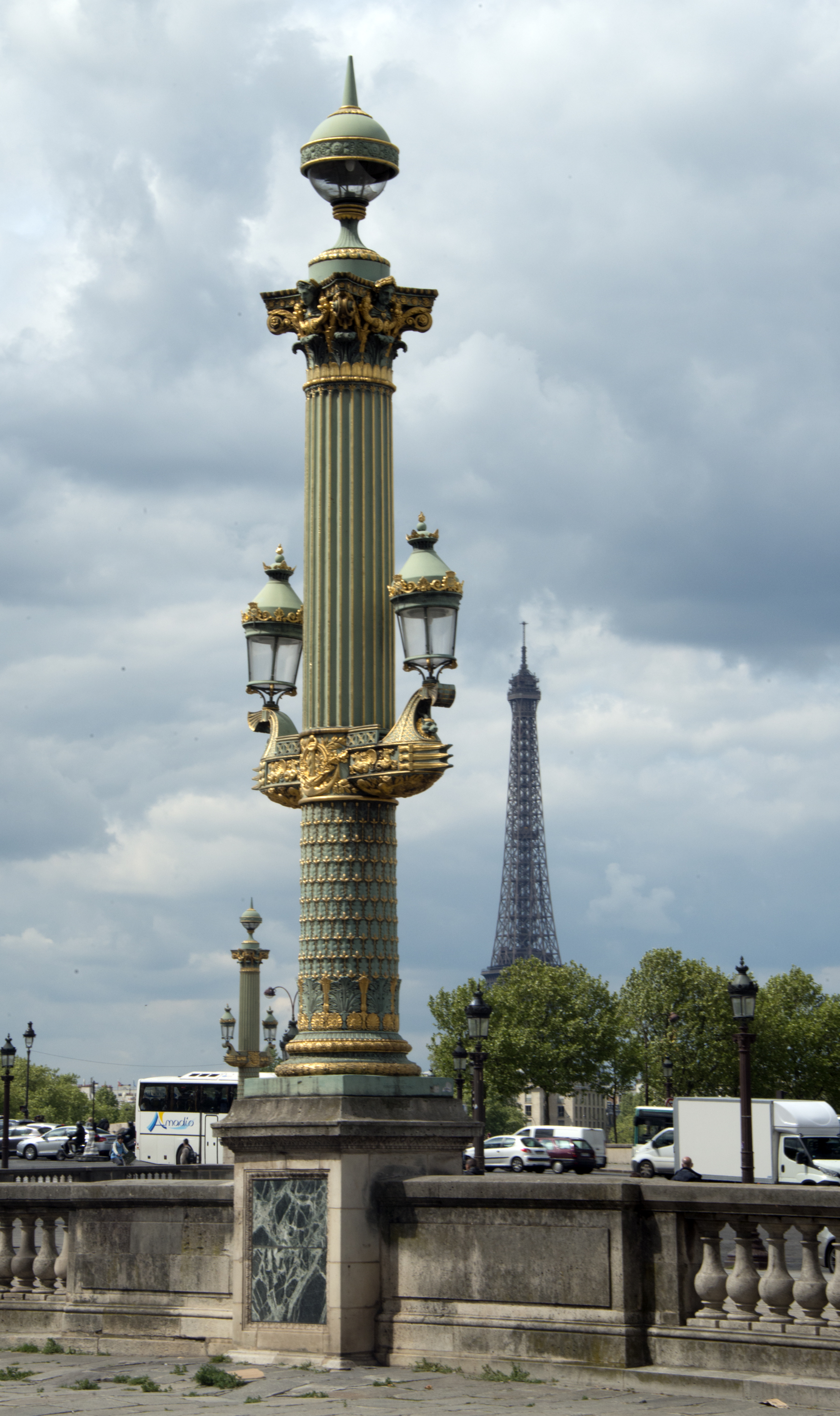 After the obelisk starts the Avenue des Champs-Élysées. The name translates as the Elysian Fields, the paradise where dead heroes get to go in Greek mythology. The pronunciation is a little tricky, and nothing like it looks. It’s more like “shahnce ay lee ZAY”. This wide, wide avenue is used for military parades each year on 14 July (Bastille Day). 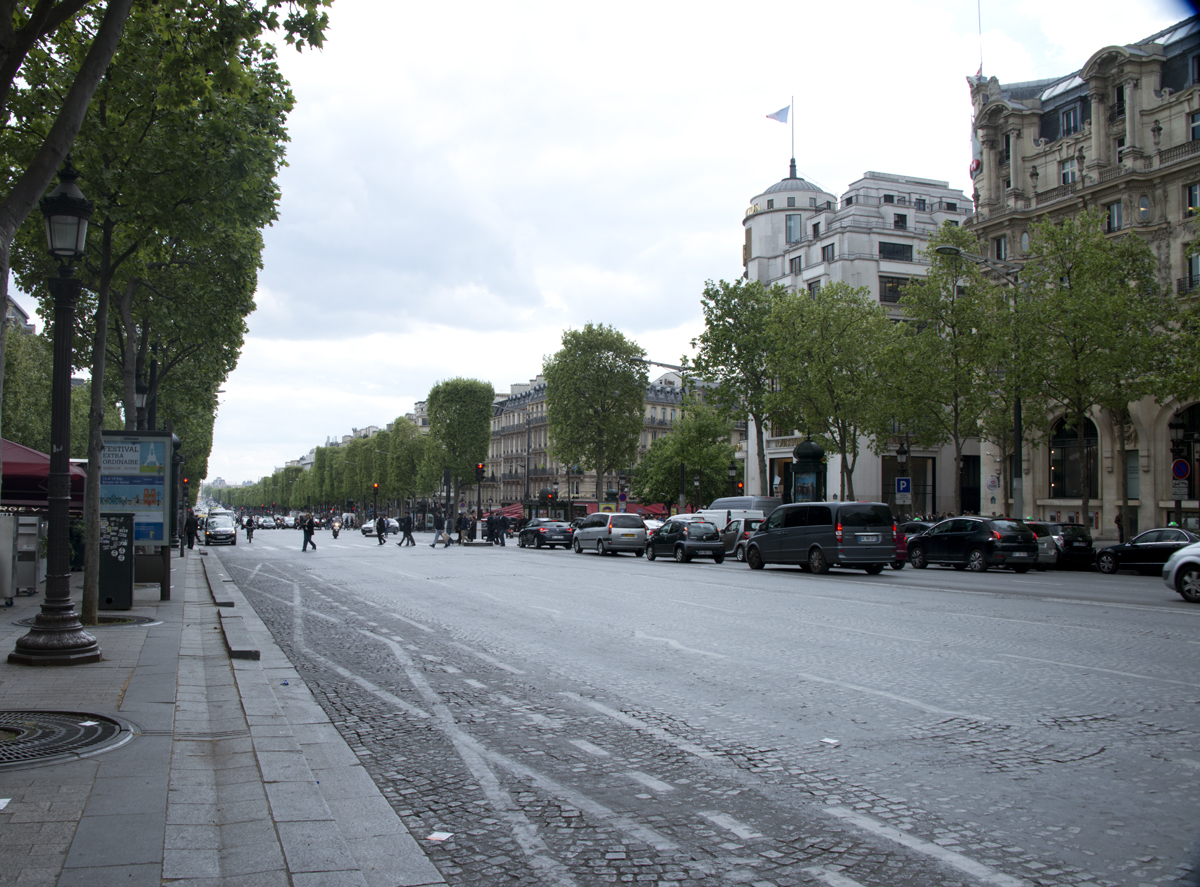 It is lined with cafes, theaters and some of the most expensive shops in the world. You can see Tiffany in the shot here: 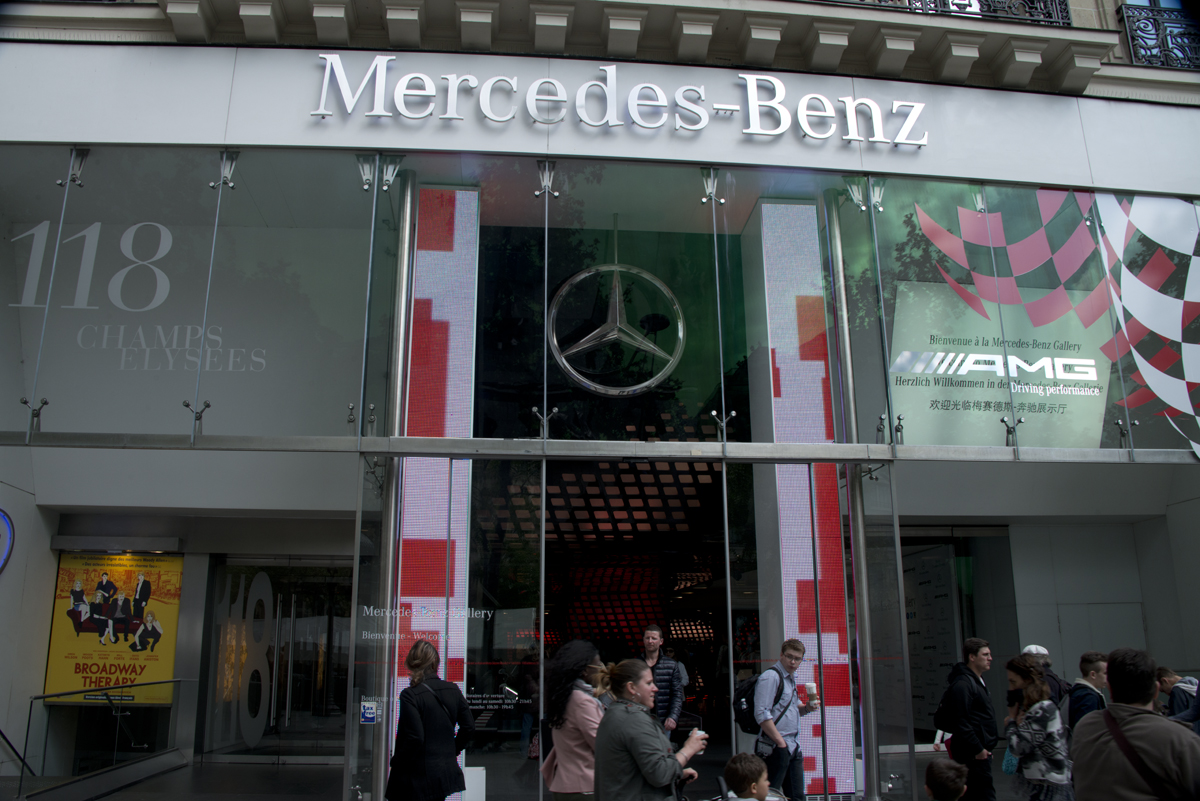 It was really fun wandering in and out of the shops, but the street was very crowded, as you can see. I was more than ready to get back to the hotel by the time we got to the end of the street.

At the end of the Champs-Élysées is the Arc de Triomphe, a monstrous monument to soldiers who died in the French Revolution and the Napoleonic Wars. 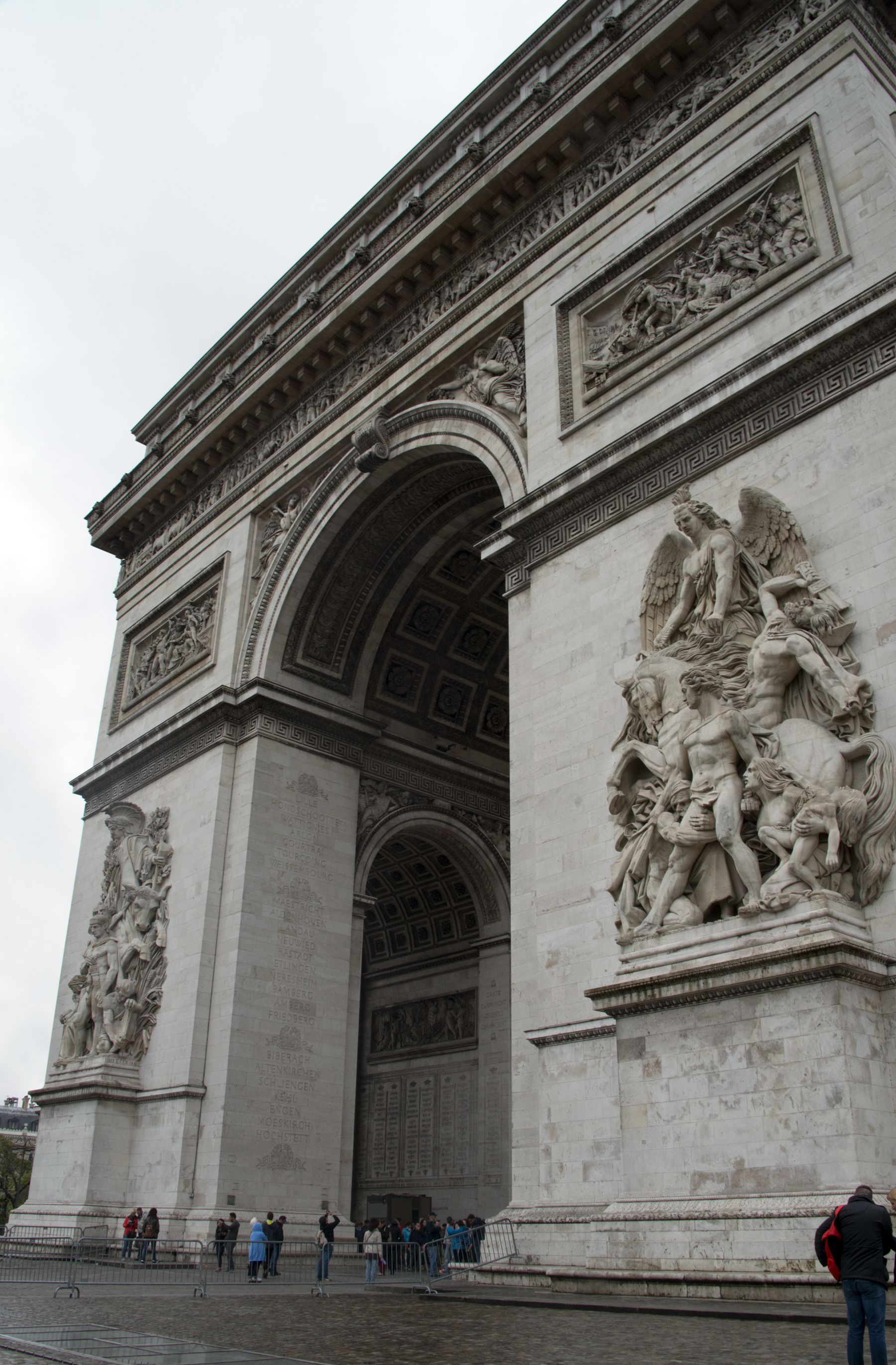 All French battle victories and their generals are inscribed on the Arc. 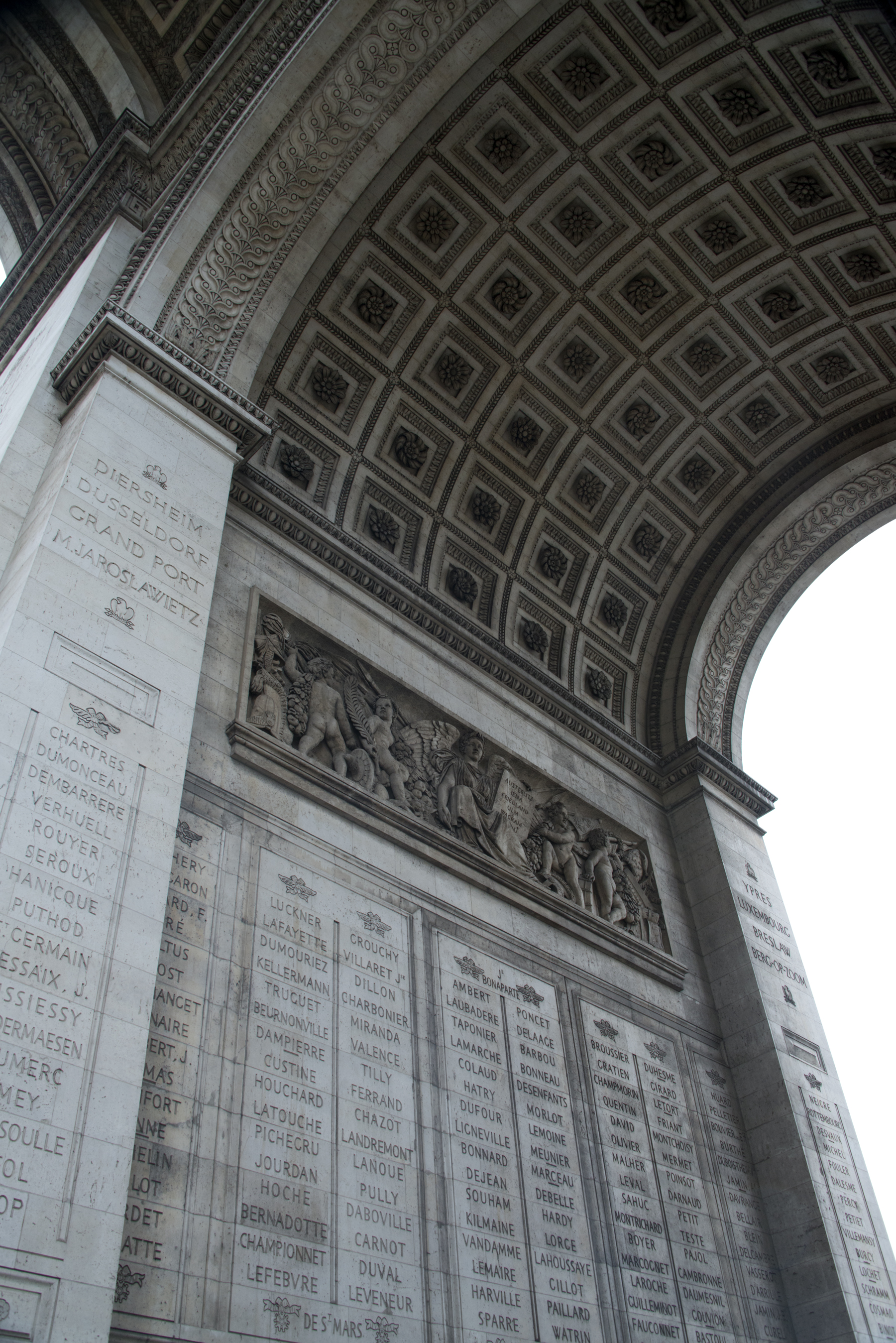 Under the arch is France’s Tomb of the Unknown Soldier from WWI, complete with eternal flame. 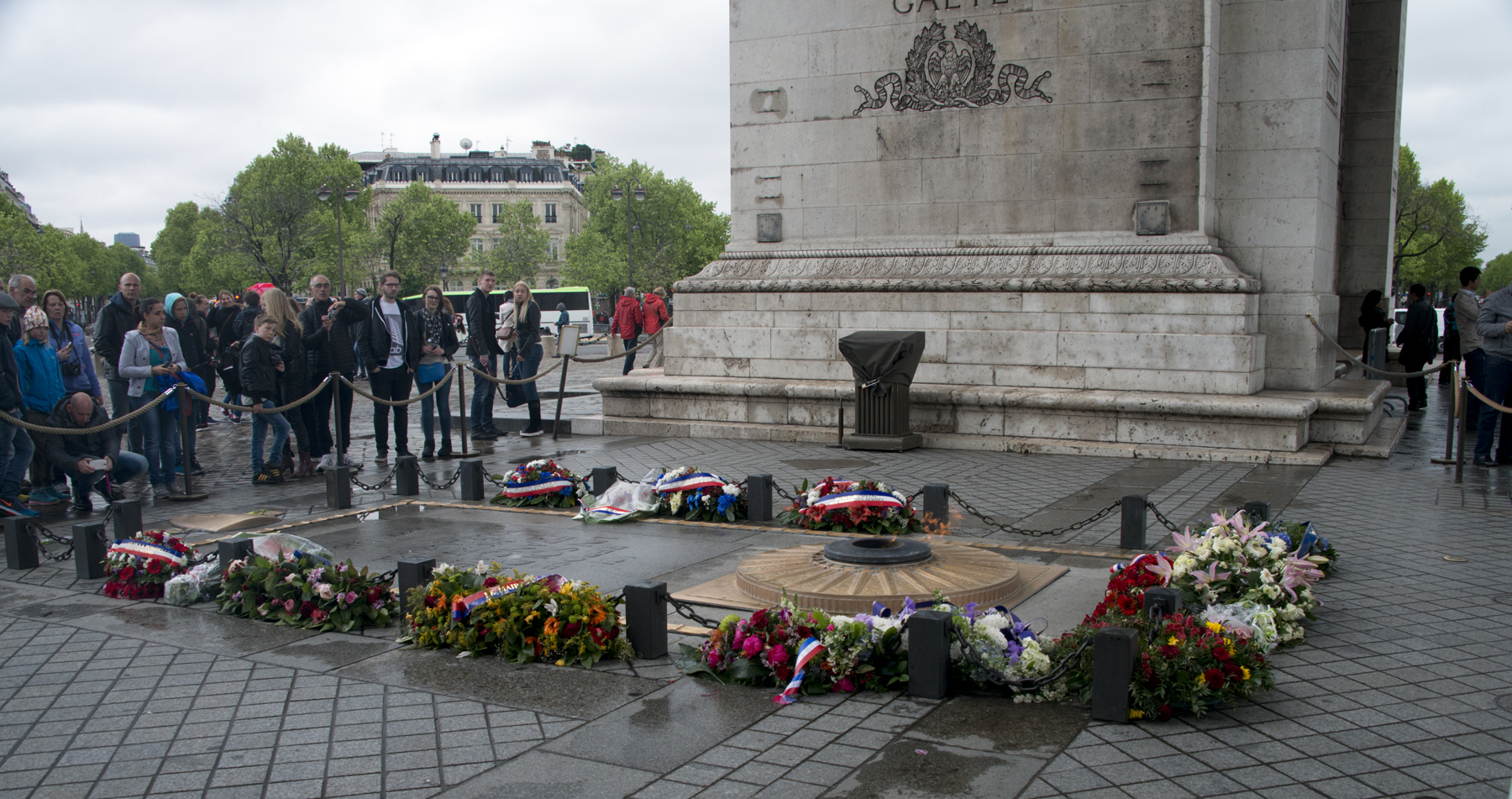 Around the Arc is a humongous traffic circle. The traffic there is absolute madness! We crossed it a few times in taxis. It was in one of those taxis that the place earned the nickname “Circle of Death” uttered by one of the more squeamish members of our party! Or Cercle de la Morte, if you will.

Here’s a too-static shot of the traffic there: 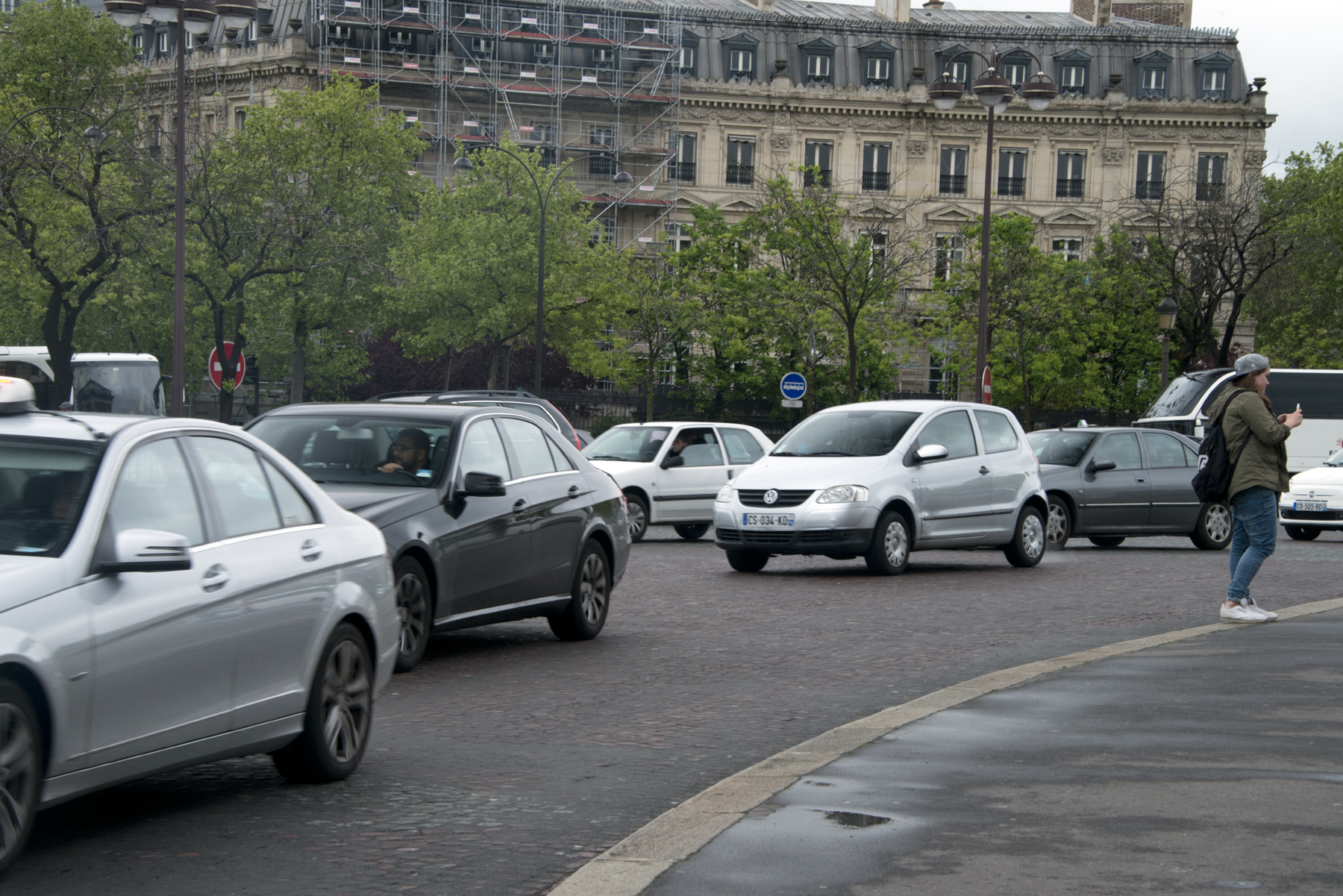 I wish I could capture the frantic pace and scary, scary, scary aspect of this location. Notice there are no lane markings on the cobblestones. Twelve (yes, you heard me) avenues radiate from the Arc’s circle. You can see a shot of it I took from the Eiffel Tower in my blog post some weeks ago.

Fortunately there is an underground pedestrian passage to get across the street to the Arc. But some fool tourists were doing it on foot, above ground, holding hands and running across traffic!

Here’s a shot from the Arc back up to the Louvre. See the obelisk with the gold top? 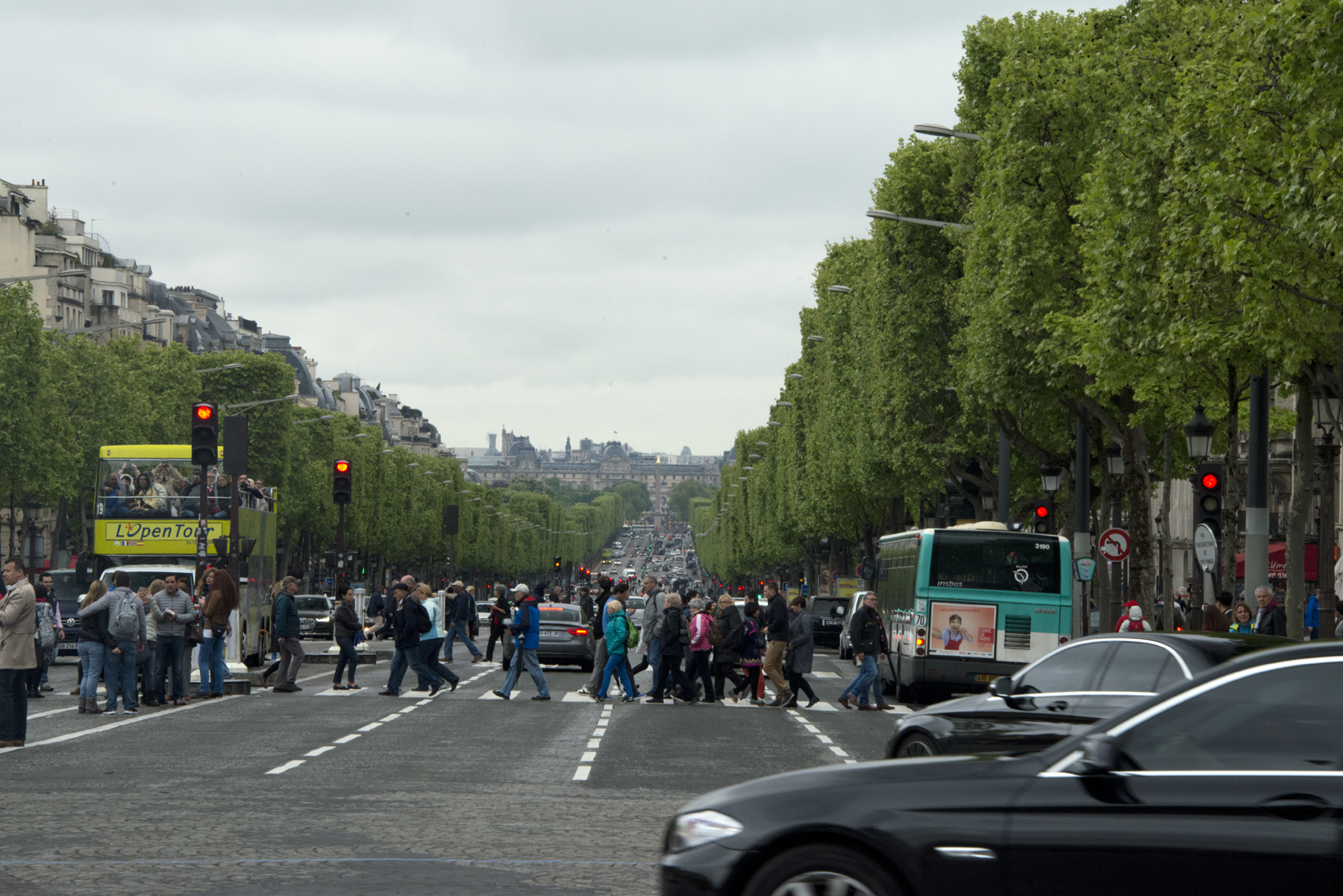 I hope you’ve enjoyed my stroll down one of the most famous avenues in the world. I really LOVE having experiences like this and sharing them with you. 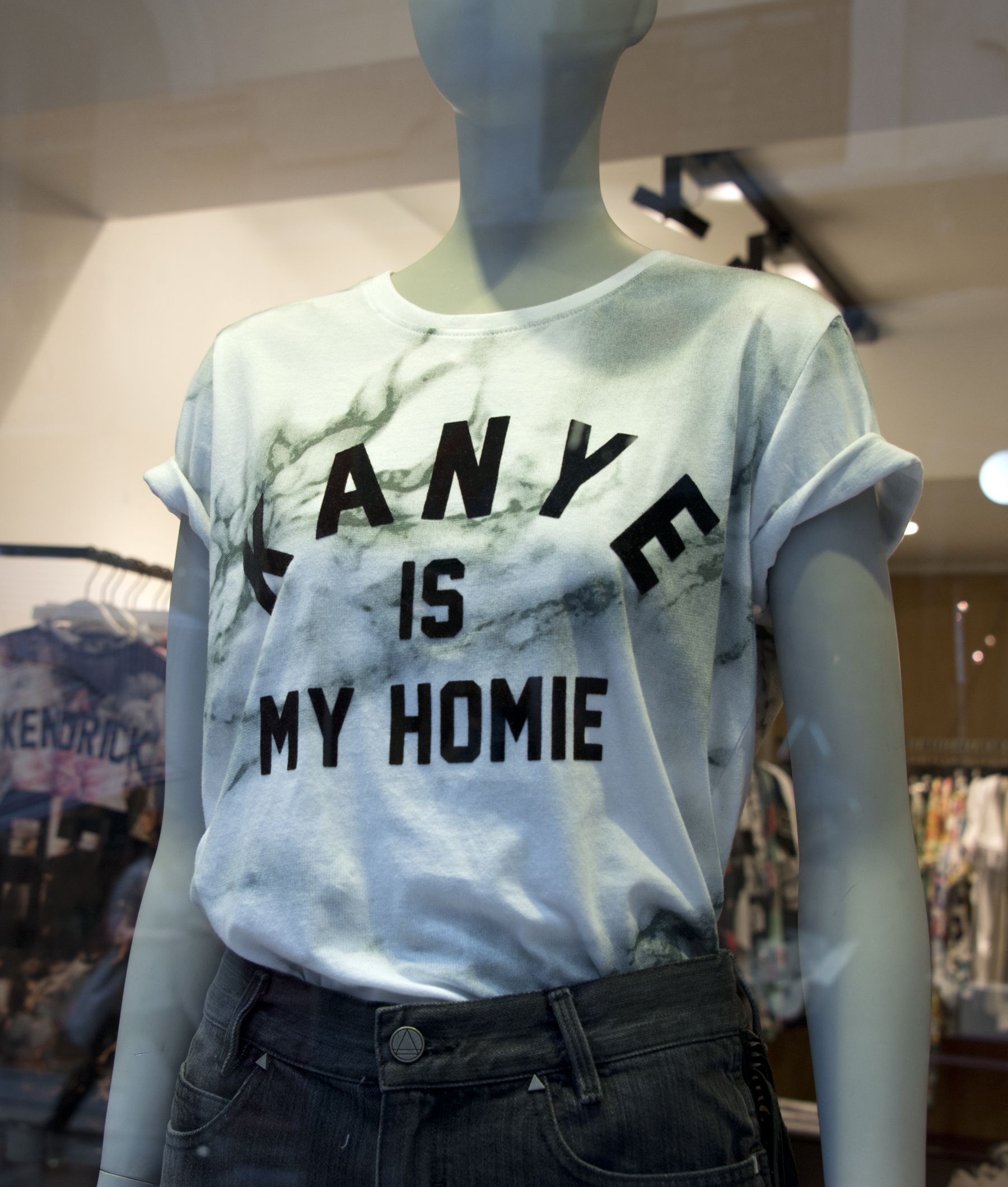