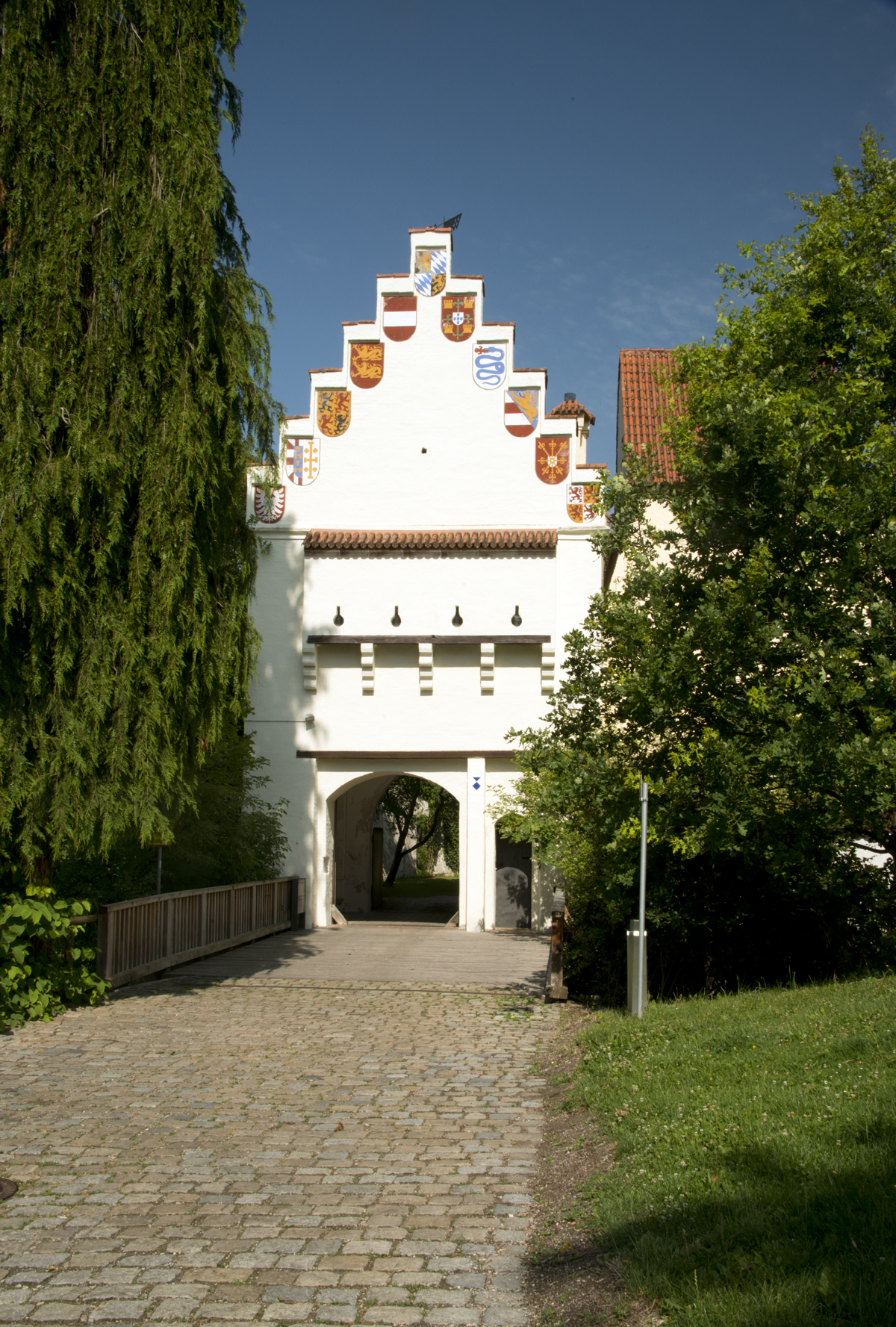 Click below and buy your copy on Amazon, either print or Kindle.

It’s a little recipe book with authentic Czech recipe I collected while living there in 2005.

I translated the Czech and European terms and measurements so the recipes are easily done in a US kitchen.

It also has stories about my time there and the photography project I did with my Czech photographer friends in Florida in 2007. I was surprised that so many people had Czech ancestry among the throngs that came to our show’s exhibit. Maybe you do, too. This would be a great memento for you or a family member.

Last Sunday, to enjoy this gorgeous weather, and to check off yet another item in our “111” book, my husband and I met friends at Castle Grünwald, just south of Munich.

It resides in the town of Grünwald, naturally, which has its own character these days. Grünwald is Bavaria’s Hollywood. That is, it’s the center for film-making in Bavaria. Of course, it’s not to the scale of our Hollywood, but we did see quite a lot of big mansions, Bentleys, Rolls and Ferraris. Word on the street is that celebrities such as German film stars and soccer players live there. One of these days I’ll have to visit the film museum.

But our destination was the castle. It’s a Medieval castle dating from the 12th Century. It’s been owned by the Count of Andechs, the Wittelsbachs (King Ludwig II‘s family), and various other prominent families. It’s been used as an ammunition depot and also a prison throughout the years. Today it’s cleaned up and serves as a museum, a branch of the Bavarian State Archaeological Museum.

Inside the gate you see above is a large and lovely courtyard. The red-shirted guy is the attendant, catching a few rays in the sun in the lounge chairs provided here: 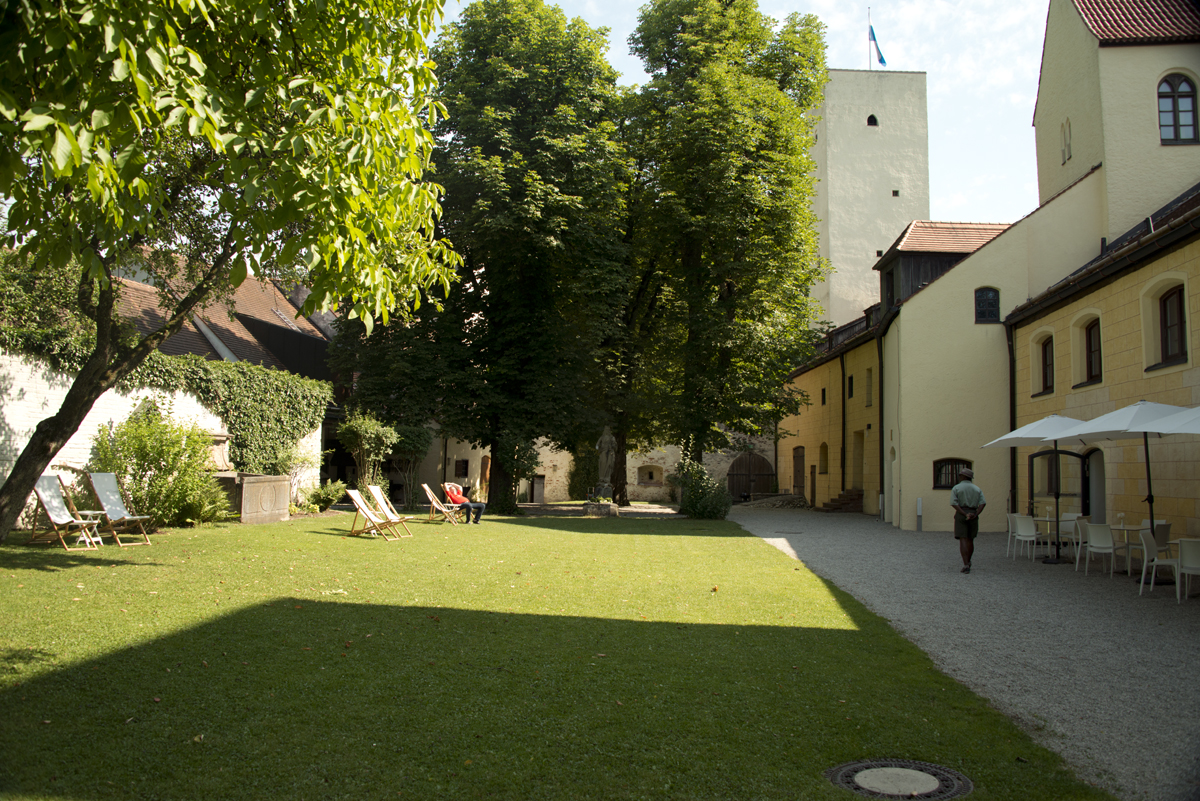 From the courtyard you can see a blacksmith shop next to the museum door:

Once inside, there is a well laid-out walking route on three floors with displays of artifacts dating back to the Bronze Age through the Middle Ages.

There was a model of the castle and grounds as it was long ago: 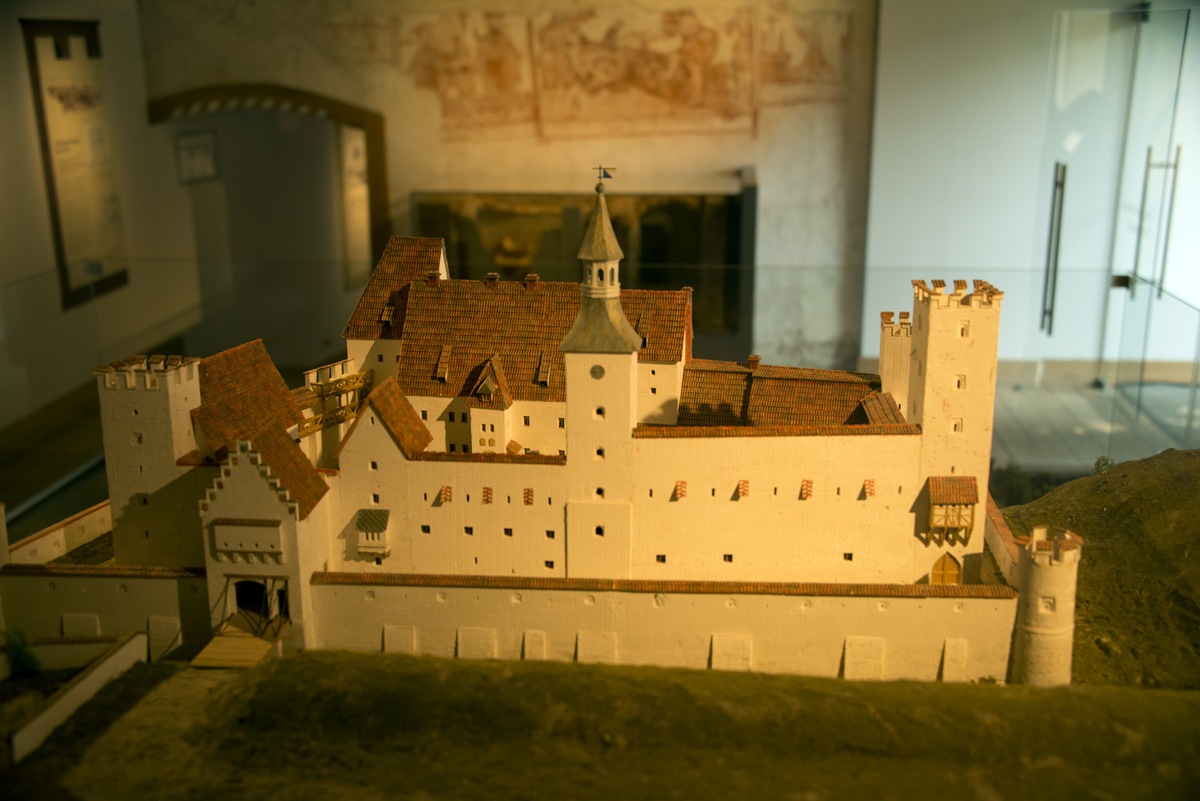 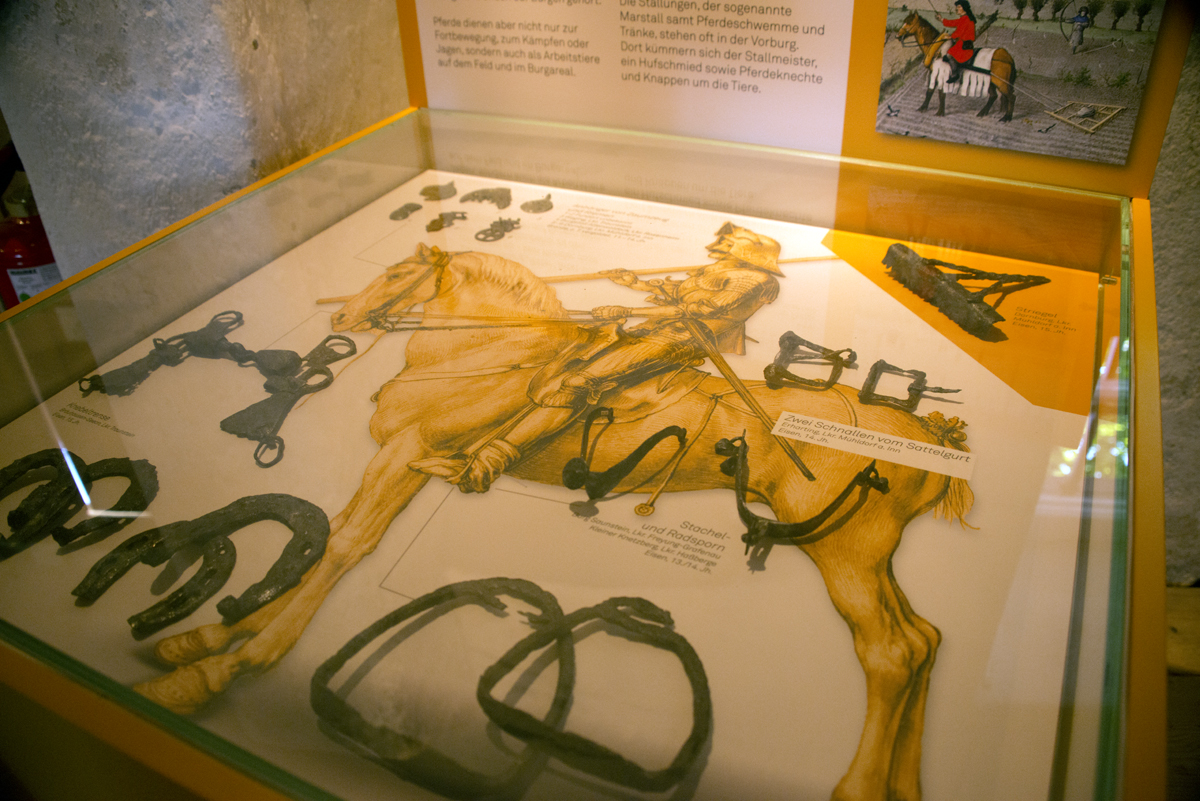 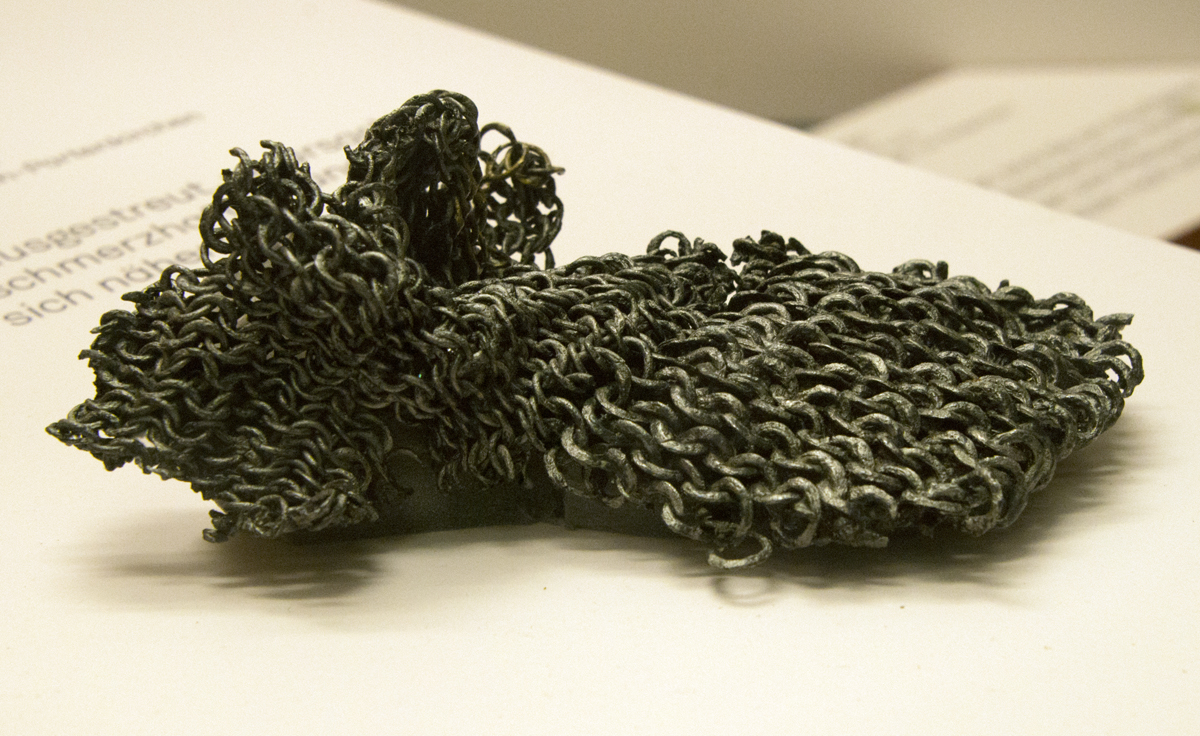 Awesome keys to the castle: 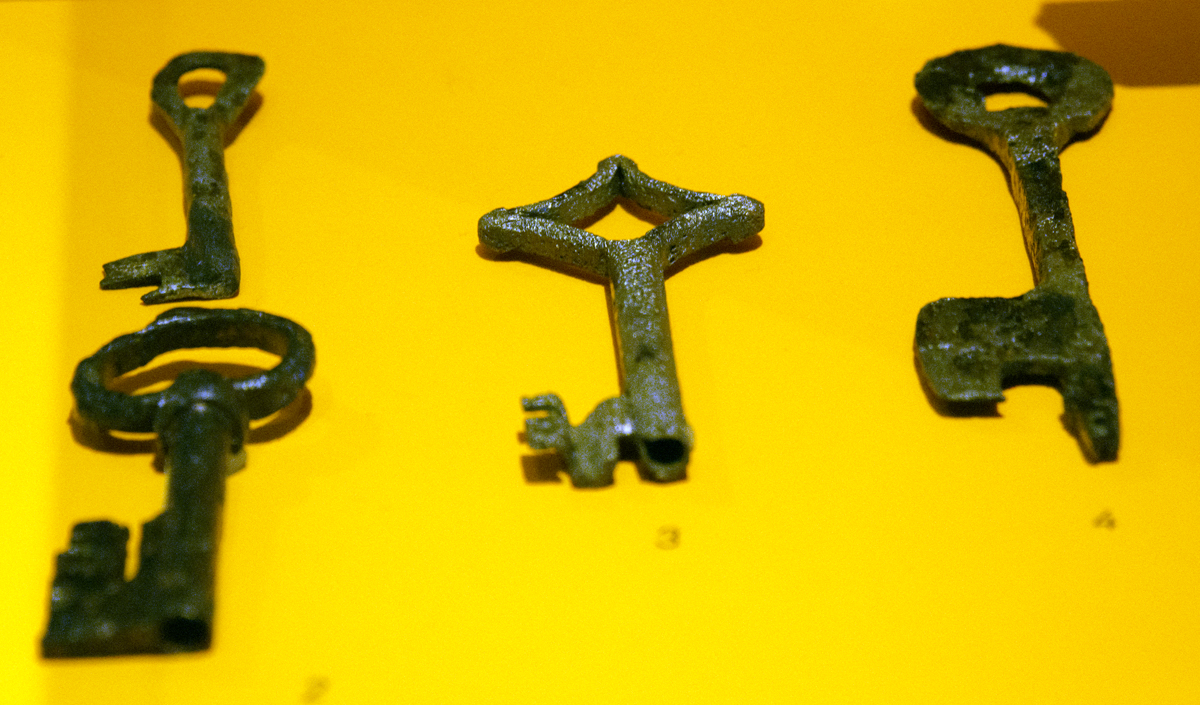 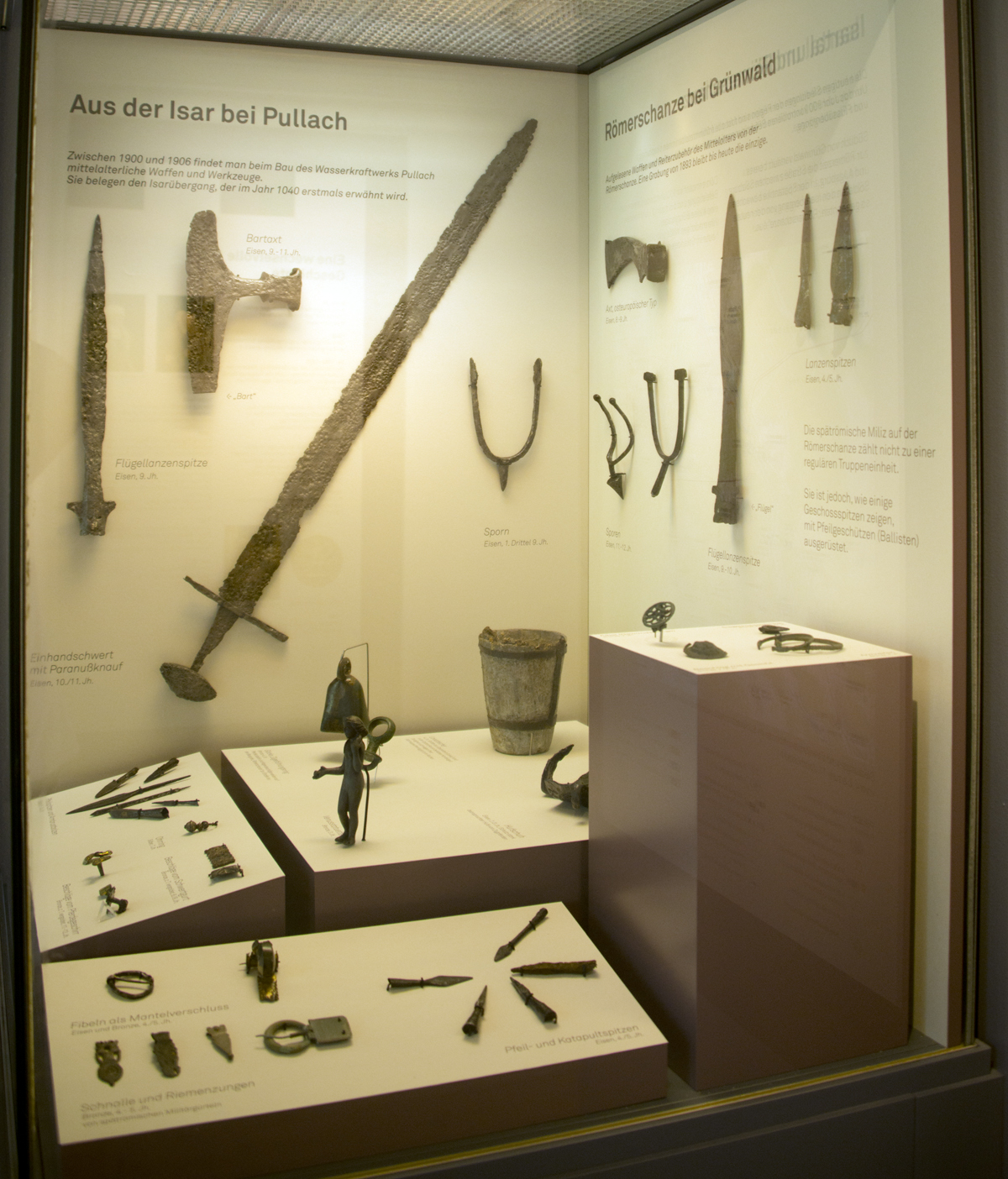 …including this, which, as I read closely on the display, is the end of a Medieval jousting pole. What?? Count me out! 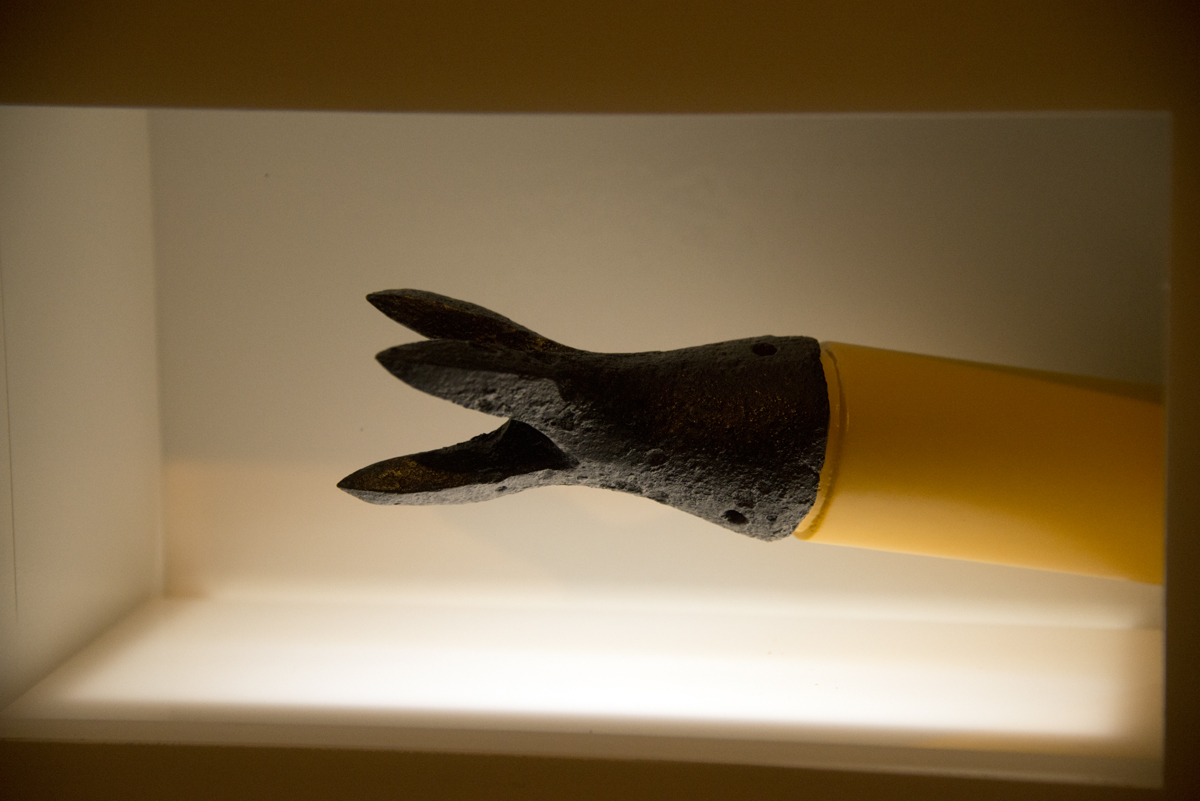 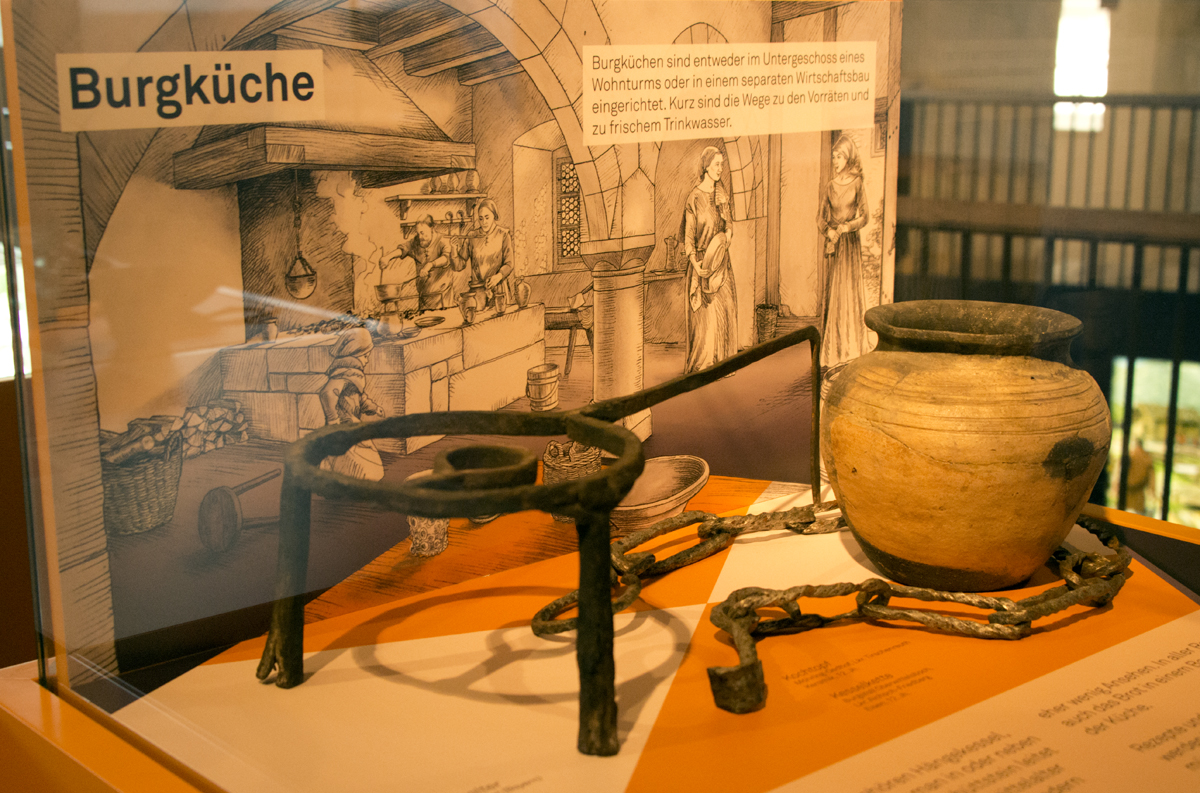 …and lots of other kitchen, dining and living tools. Here is a display of various spigots for barrels of alcoholic beverages. I totally love the little chicken on the left. The text underneath says, “Rule of thumb: the smaller the nozzle, the higher the alcohol percentage in the barrel.” The German word for “nozzle” is Zapfhan, which literally means “tap chicken”. Their word for “faucet” is Wasserhahn, which is “water chicken”. For that matter, a weathervane is a Wetterhahn: “weather chicken”.

One of my favorite displays was a sculpture by Ludwig Schwanthaler, a German sculptor from the 1800s whose work can be seen in the Schwanthaler Museum in Munich. Just lovely. 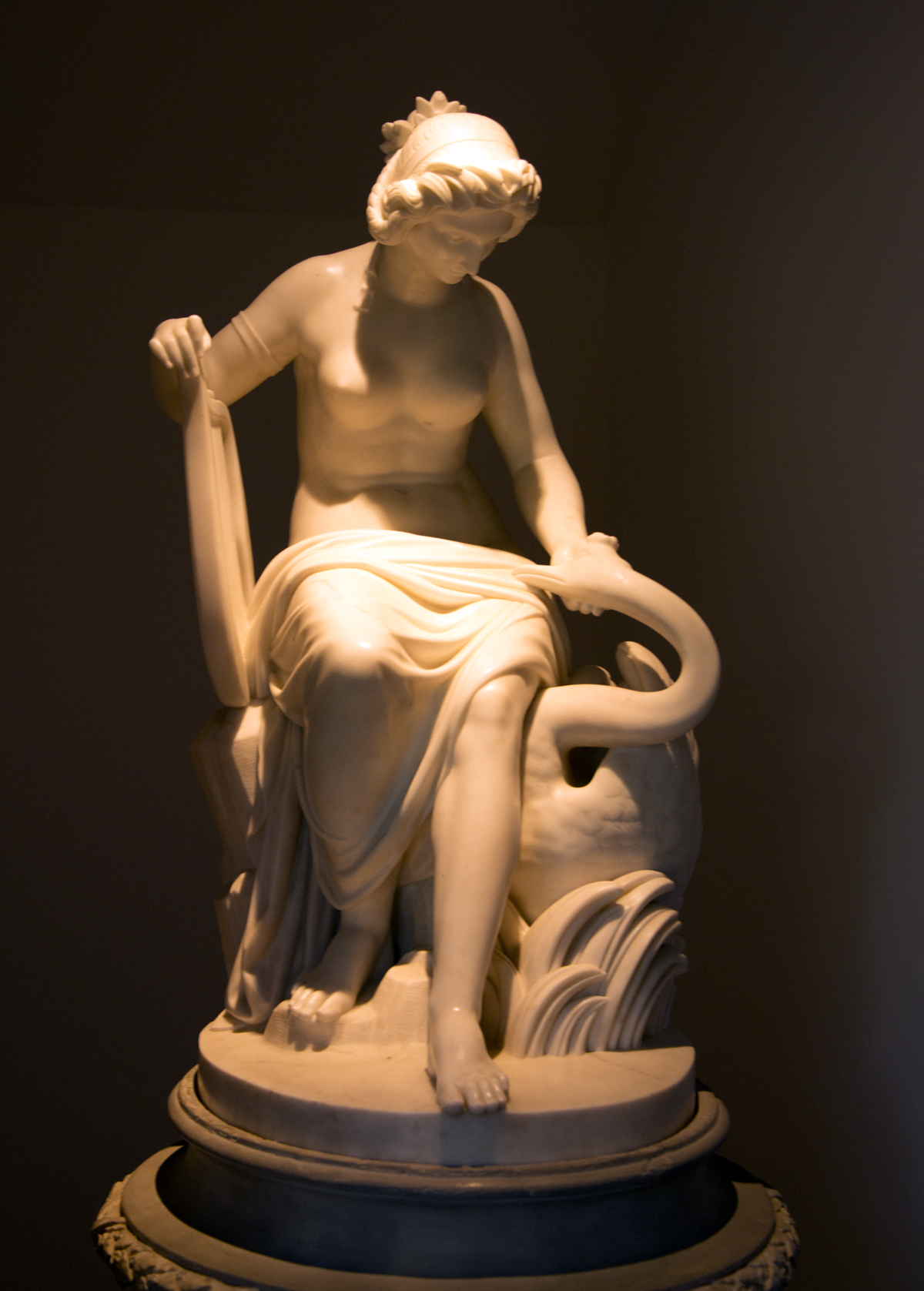 We saw clothing displays as well. See the leather shoe soles? What’s with the points? 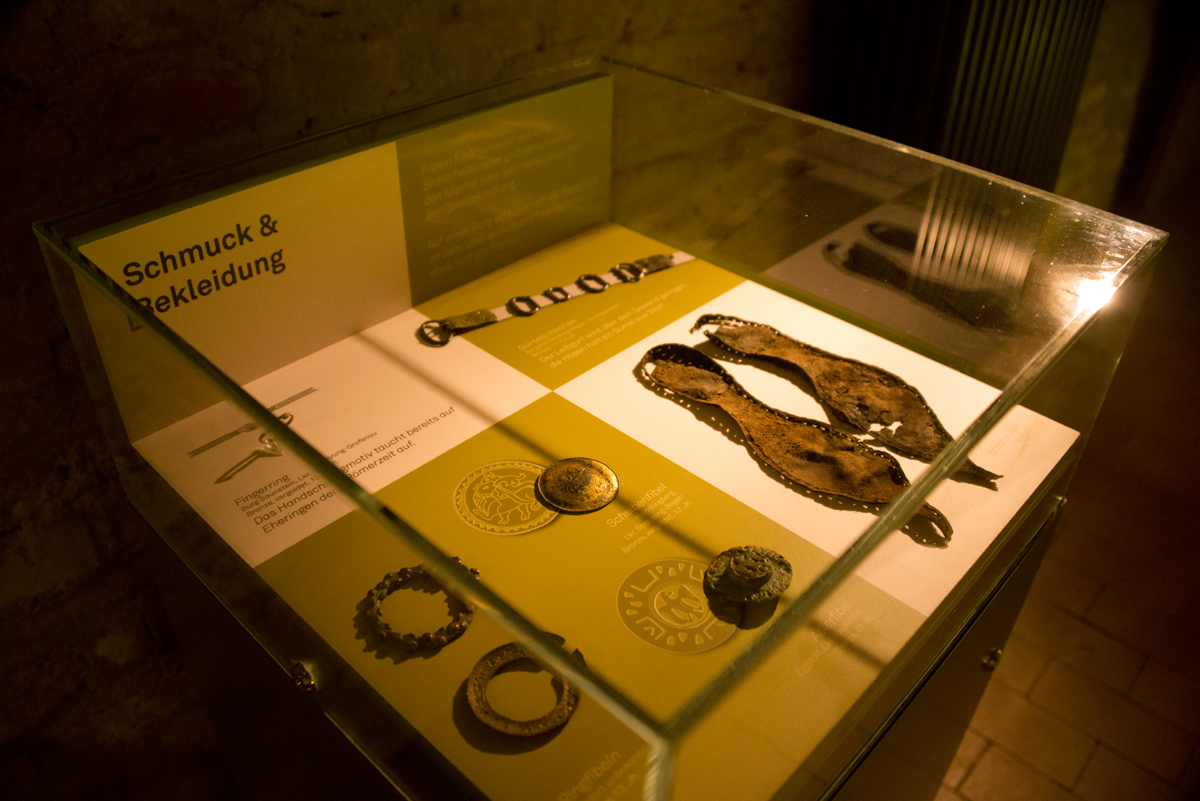 And the king and queen’s clothing. On the left is the queen’s flimsy cotton slip. She then made up for the flimsiness by wearing the heavy wool robe and tunic over it. Plus that just-been-to-the-dentist headdress! 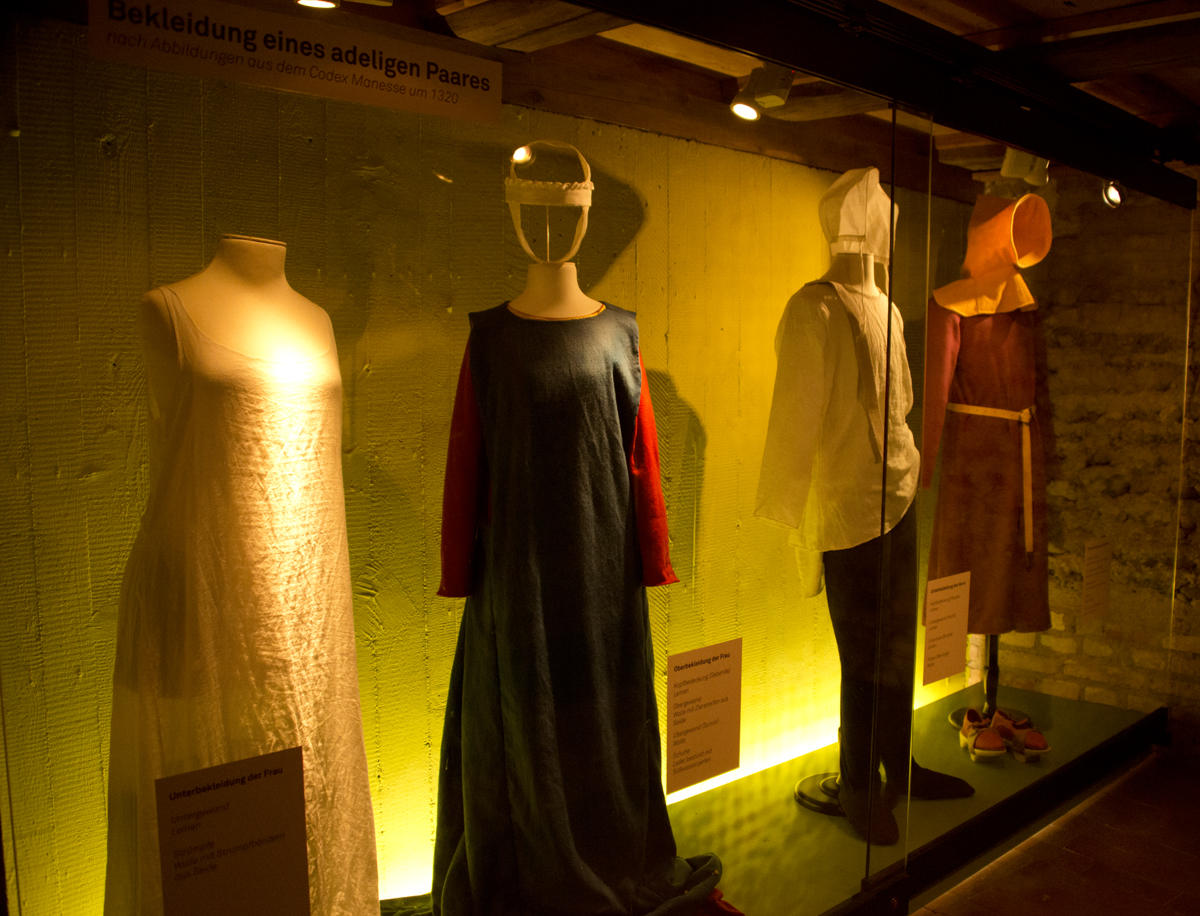 In the basement were displays about the water tower 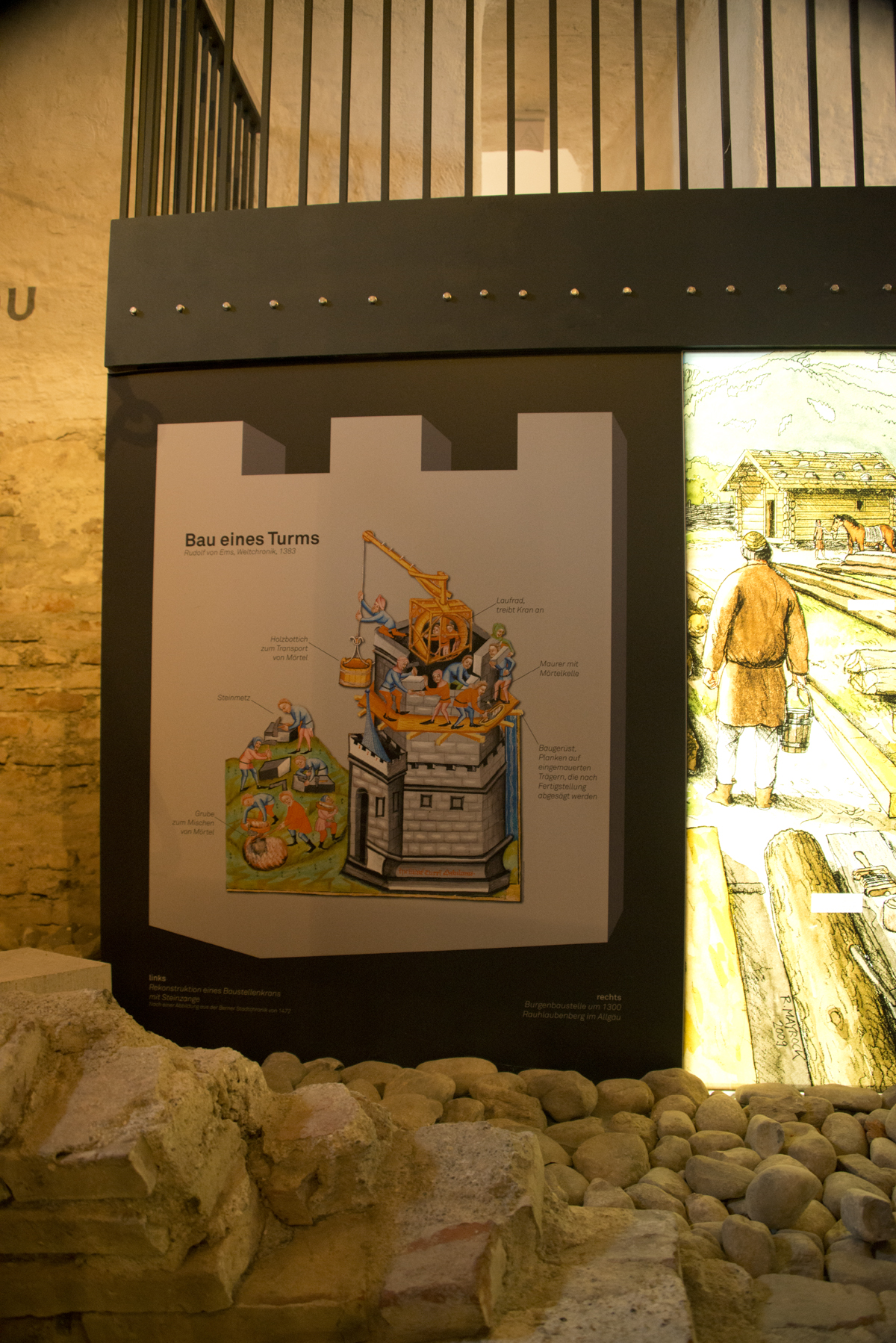 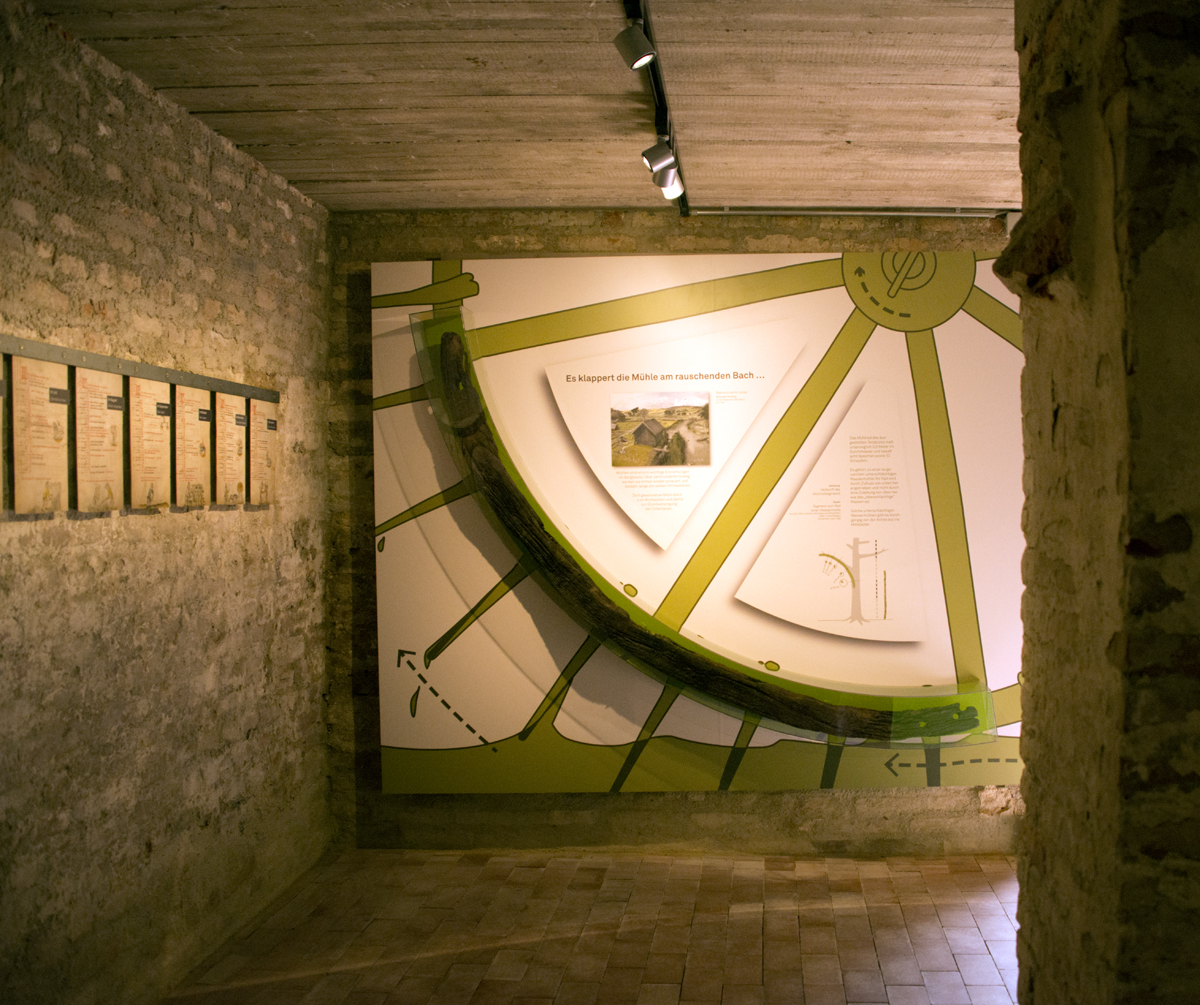 Once back outside we were free to roam the grounds. I love this little watchtower: 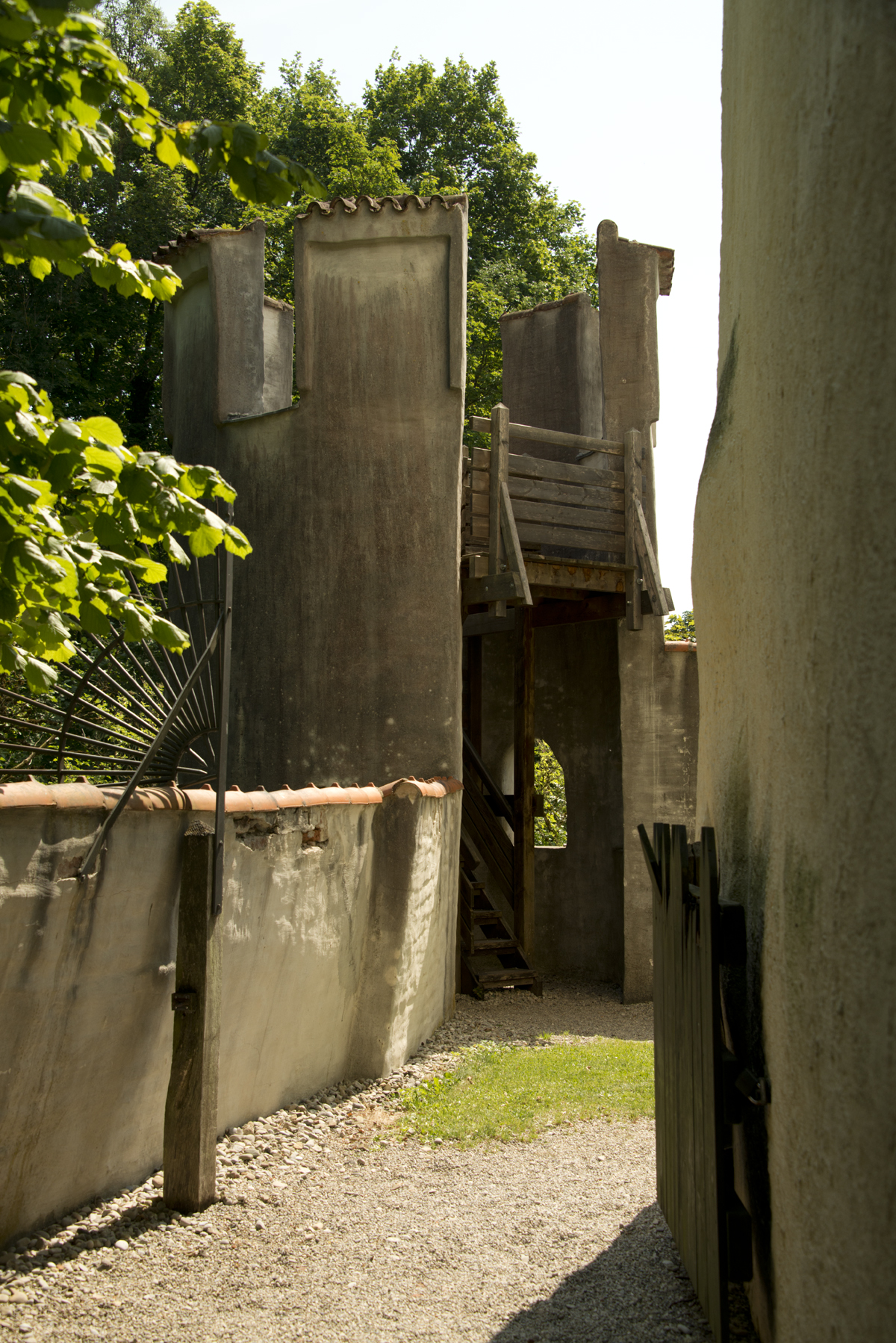 But it was dwarfed by the neighboring castle tower: 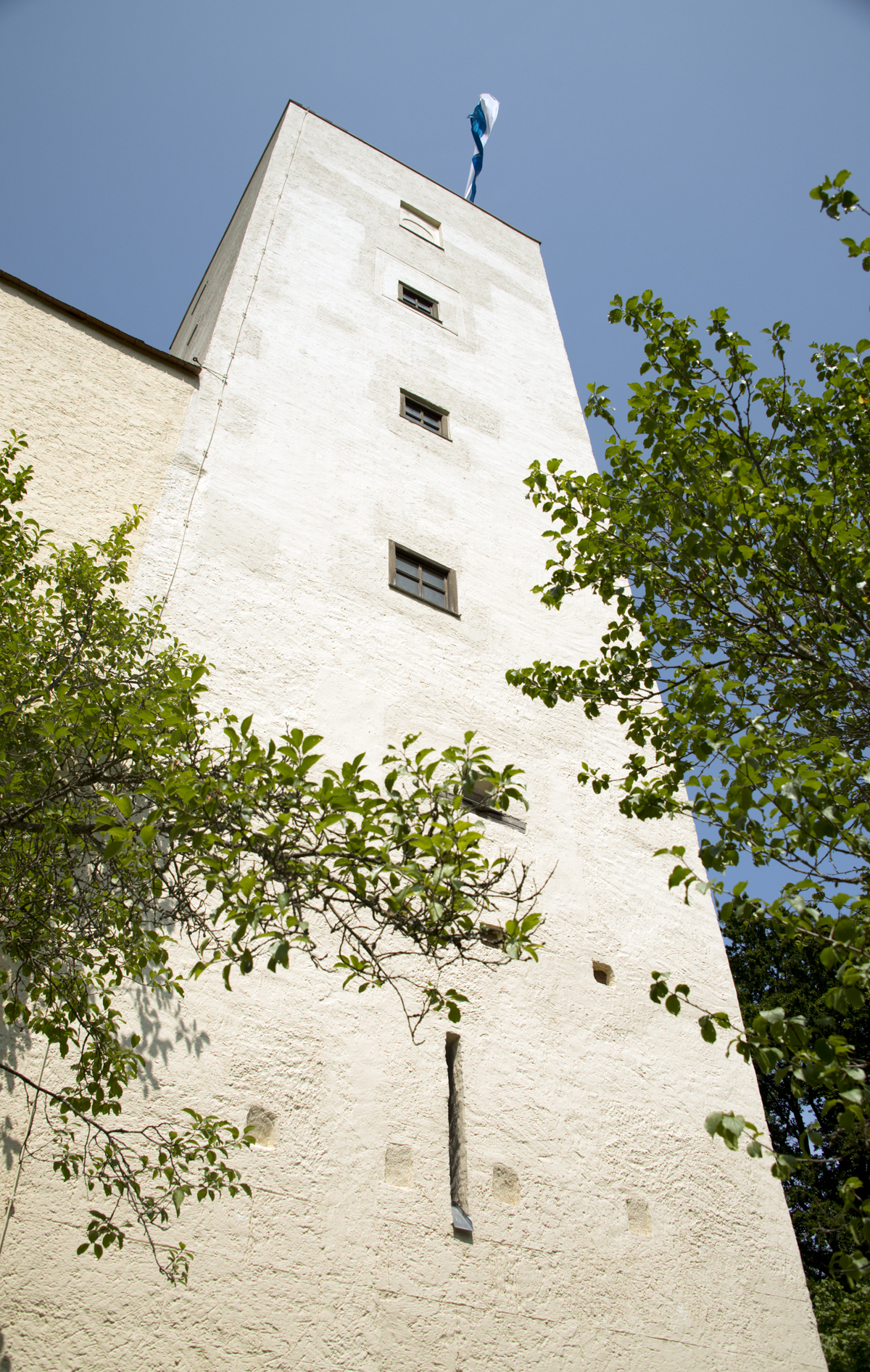 The rest climbed this enormous tower and I stayed on the ground to get this picture. See them up there? 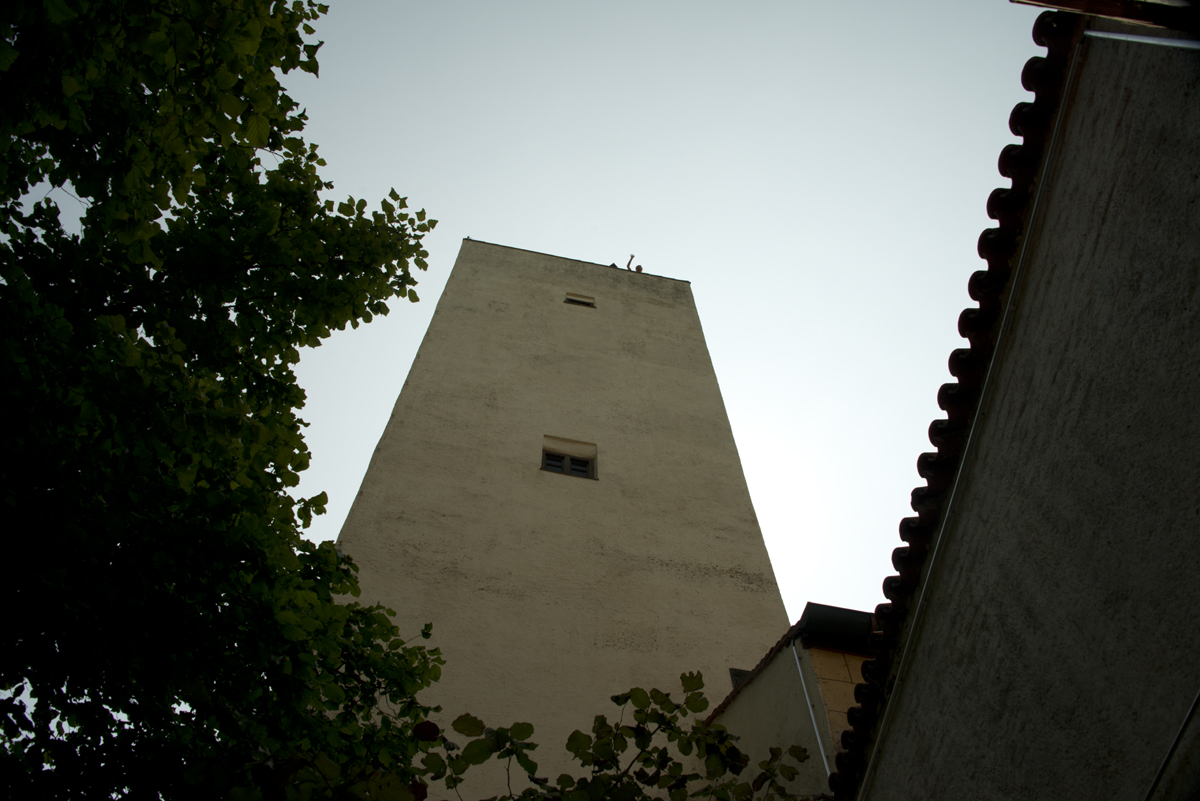 My husband provided me with this photo from an iPhone while he was on top: 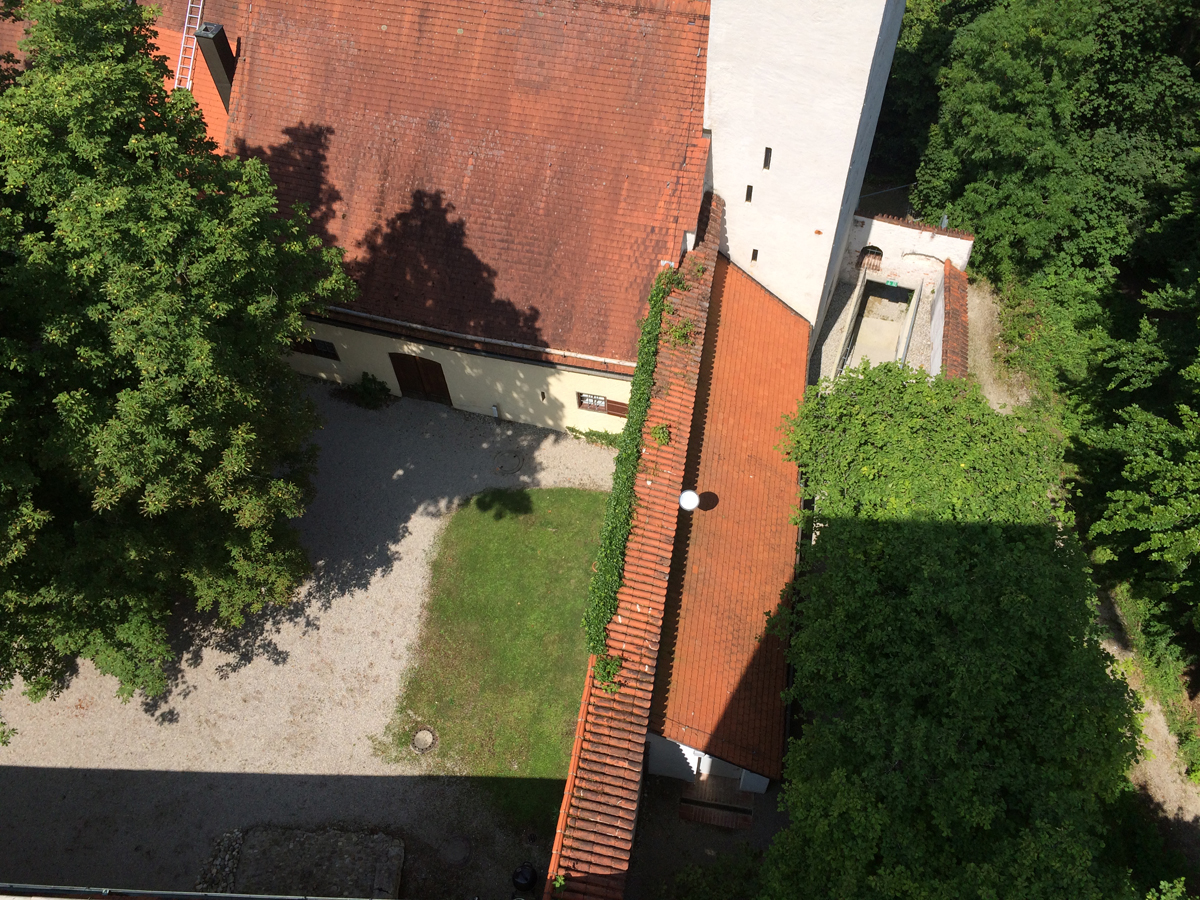 And Grünwald from above: 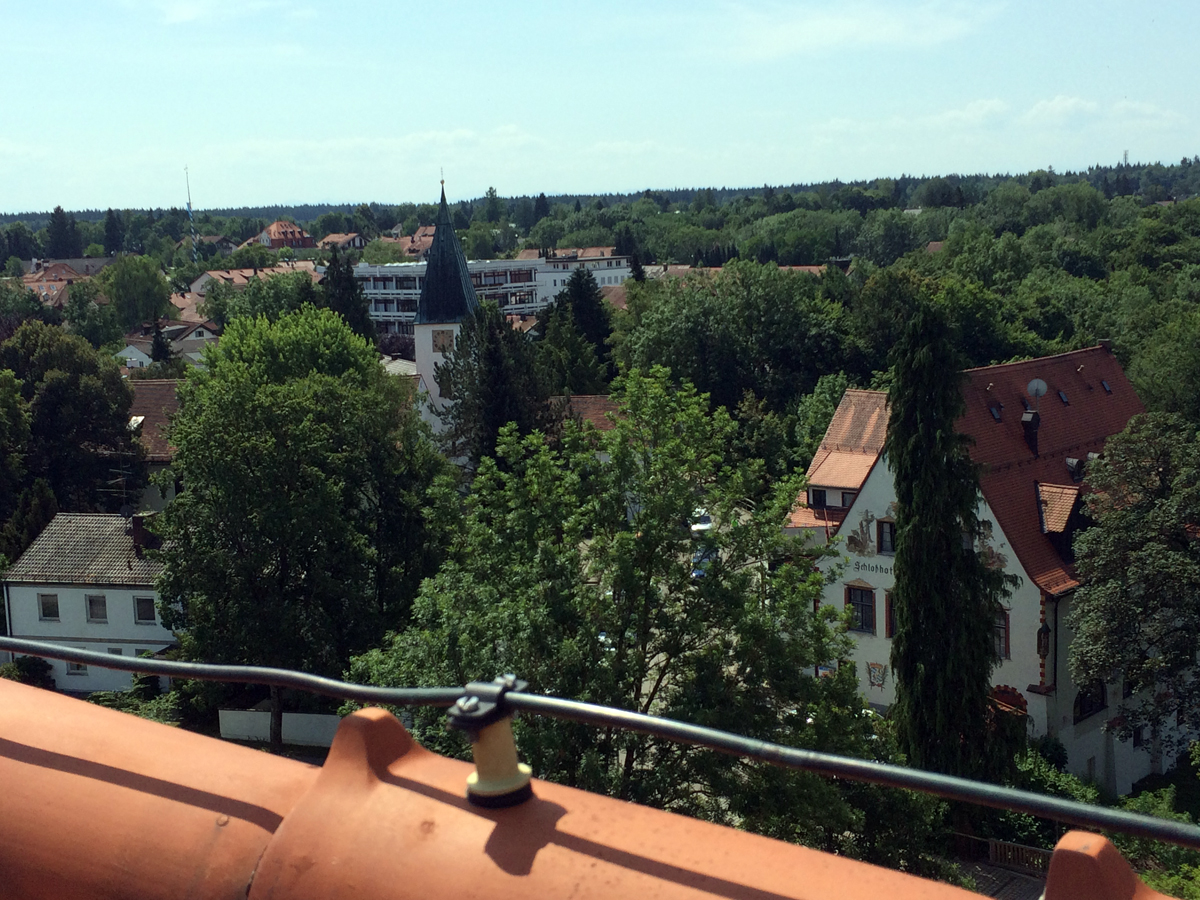 After our tour we were guided by our friends to a wonderful place called Eierwiese where we had a wonderful, leisurely lunch: 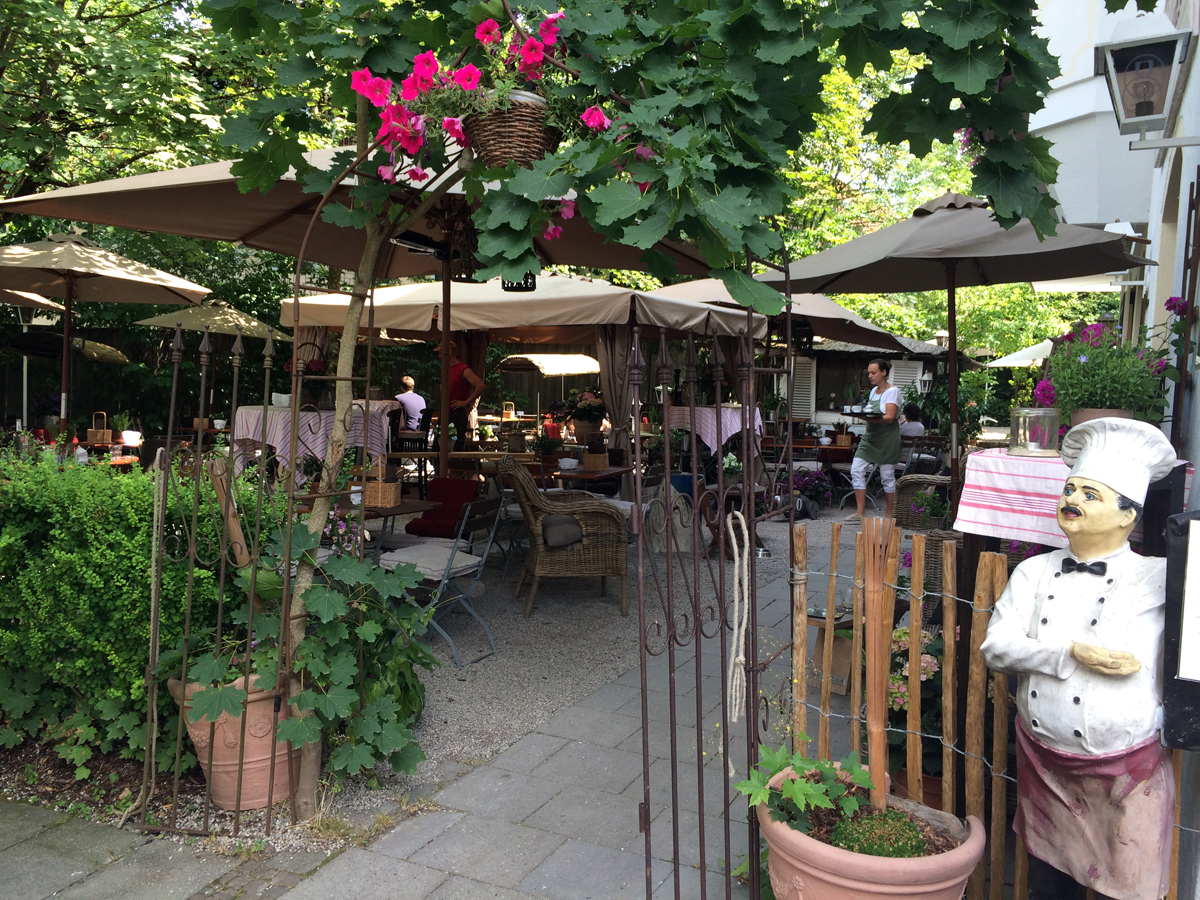 After lunch we crossed the Isar river to stroll along the banks and I got this pic of the castle from there: 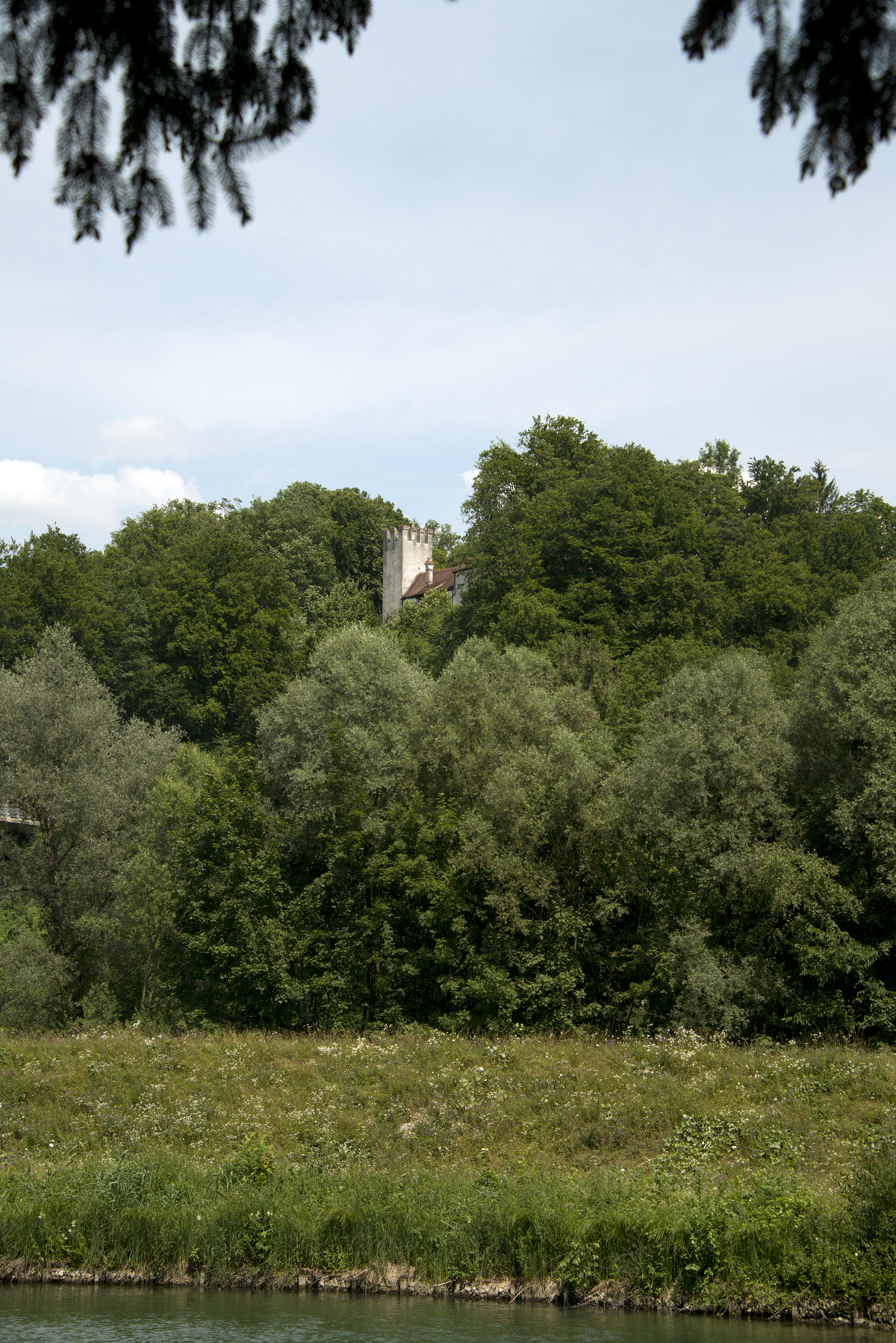 We also saw several of these party rafts on the river, complete with loud music: 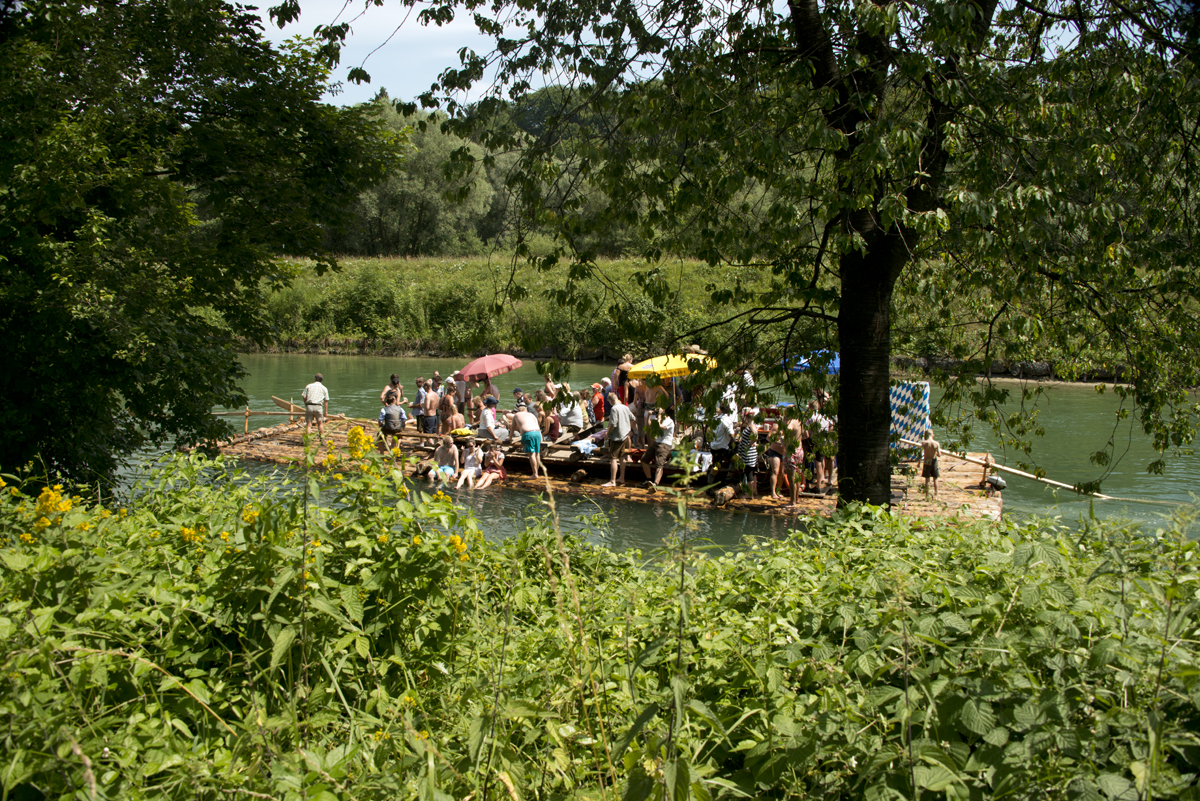 What a day! I am bittersweet these days, because my time of living in Germany is coming to an end at the end of this month. My husband and I are moving back to the States, at least for the time being. But don’t worry, I have lots of photos and journal entries stored up that will keep the blog posts coming for quite some time. Besides, no rule says I have to blog about Europe – I just may share some stateside experiences with you, too! 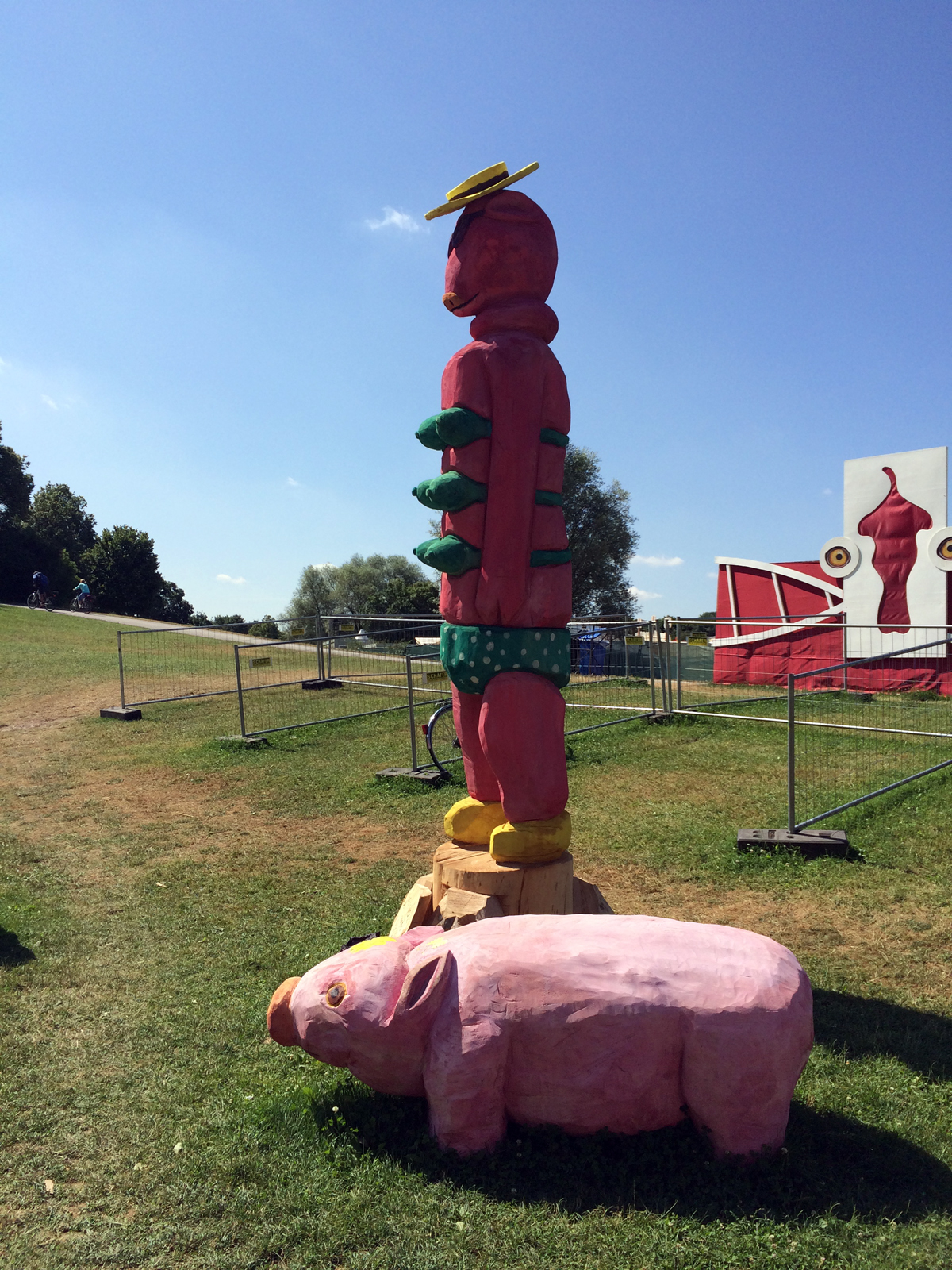